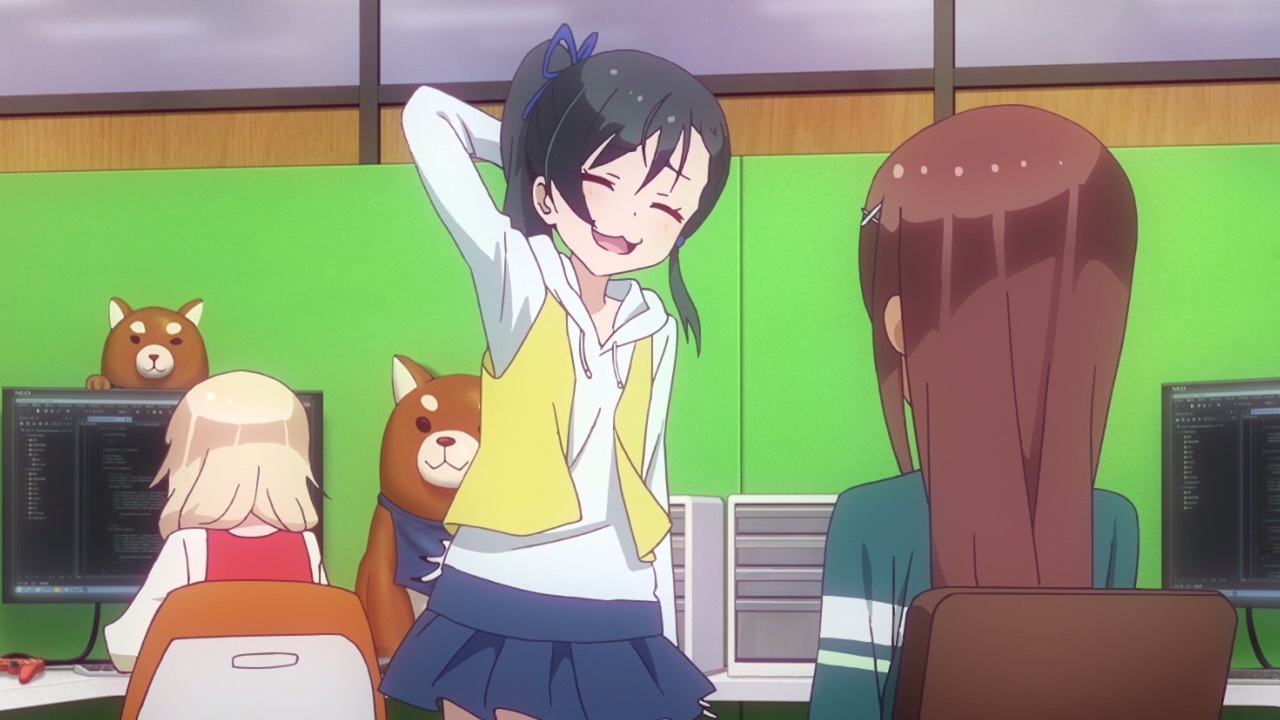 Hey everyone, this is the penultimate episode of NEW GAME!! where Tsubame Narumi is getting a lot of praise from Umiko Ahagon due to her fast programming skill.

I must say that Narumi is getting better, but what about Nene Sakura? 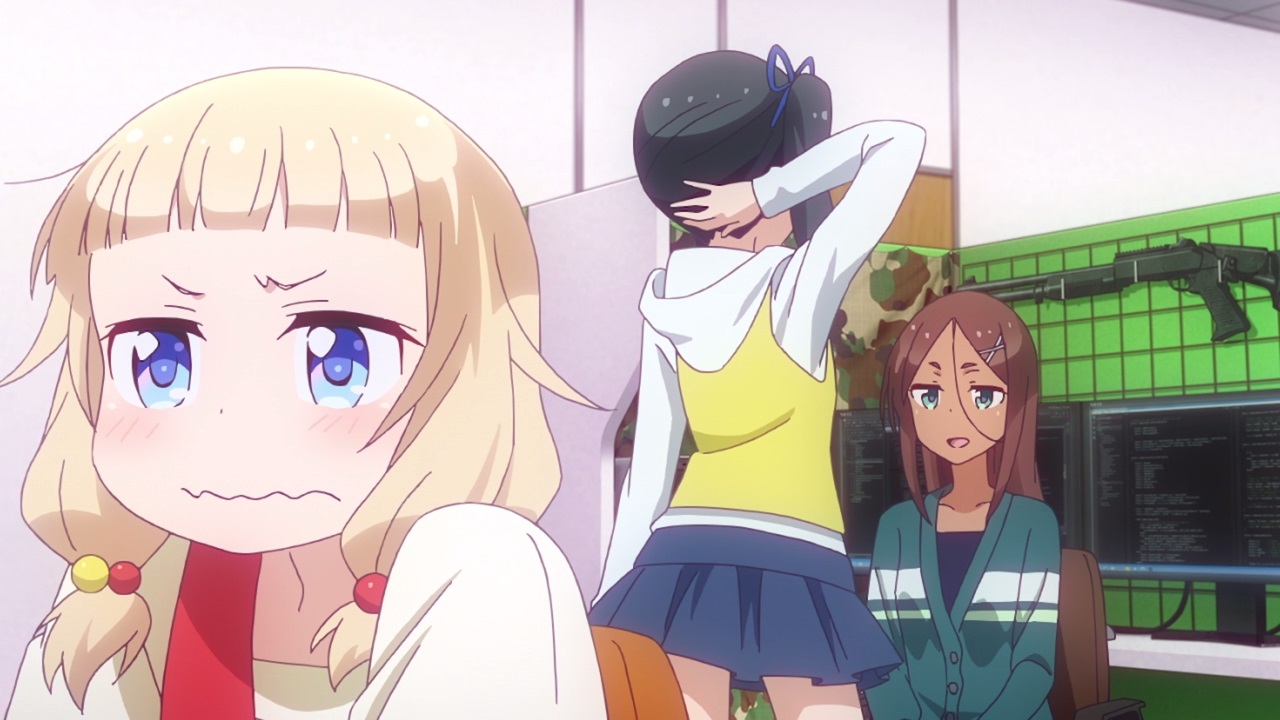 Oh right, she’s stuck at debugging where Nene must study codes from other people and correct any glitches that might break the game.

Sure that she’s not so happy when Tsubame is getting praised by her mentor, but it’s Nene’s duty to make Eagle Jump’s game a success and glitch-free! Then again, seems that Sakura is down so she took a break from debugging duties… 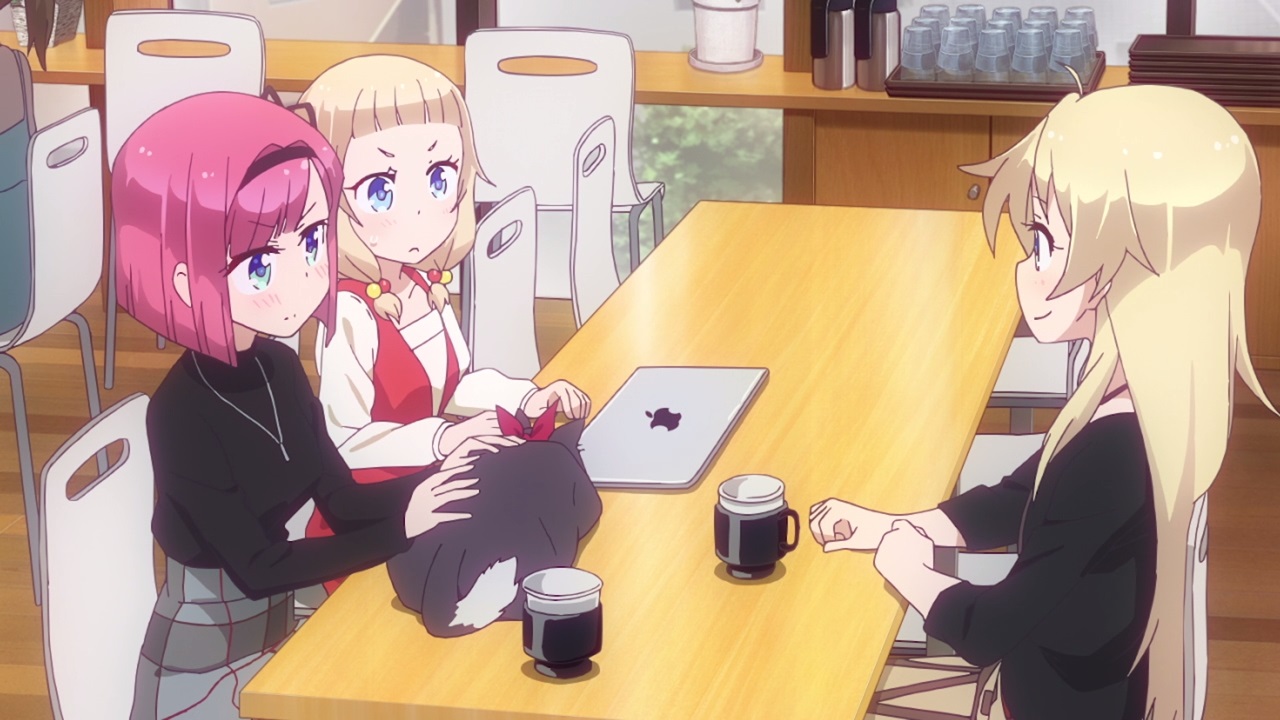 Now then, Nene Sakura is having a conversation with both Momiji Mochizuki and Kou Yagami at the cafeteria.

Also, Momiji revealed to Nene that Tsubame Narumi was supposed to become the owner of her family inn in Hokkaido, but she decided to become involved in the gaming industry and so Tsubame worked hard to get hired at Eagle Jump based on her skills.

Well, I have to say that Nene got the whole picture in regards to Tsubame Narumi, but it turns out that it was supposed to be a secret! 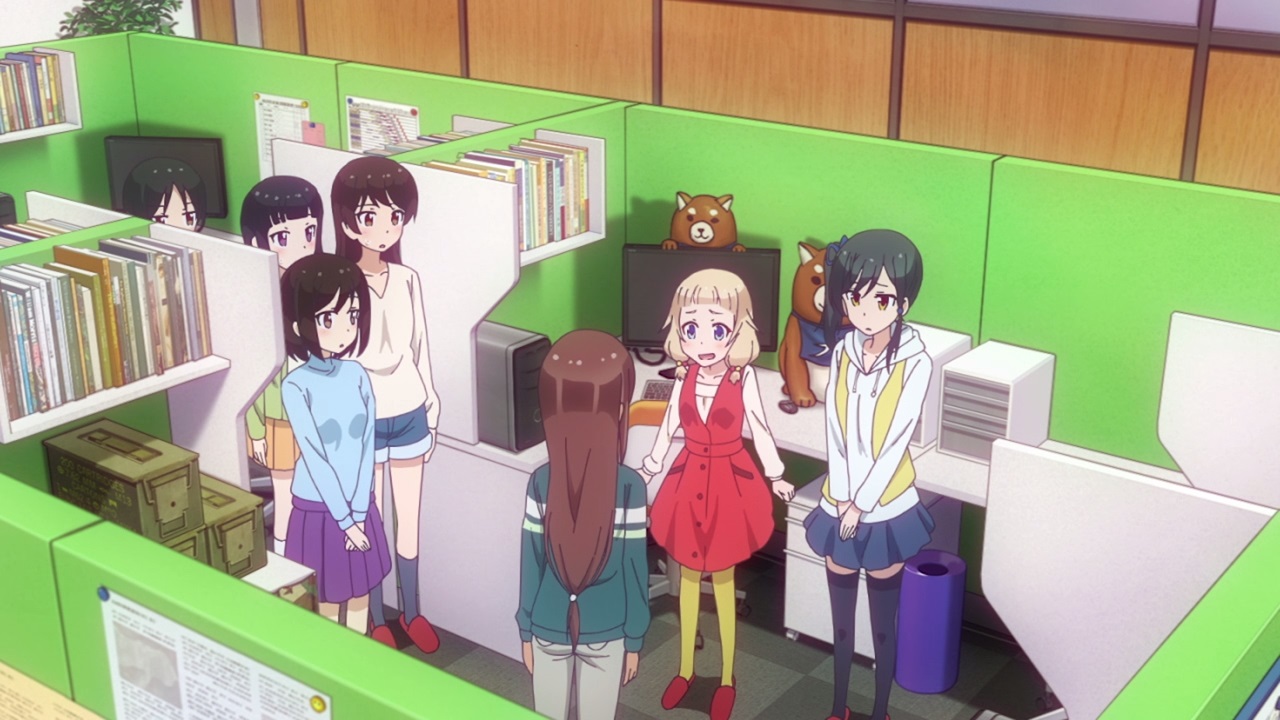 Now that Nene’s break is over, it’s time for something serious as Umiko Ahagon is discussing her co-workers that Tsubame Narumi’s mini-games have bugs that needs a lot of fixing. Worst of all, they might cut the mini-games if they’re not fixed within a short amount of time.

For Narumi, it was a big blow as while she’s impressive when it comes to programming at a faster pace, seems that Tsubame didn’t check her code thoroughly. Hence, it’s a pain in the ass for debuggers to iron out those potential glitches, and it’s pretty much over for Tsubame Narumi’s career as a game programmer! 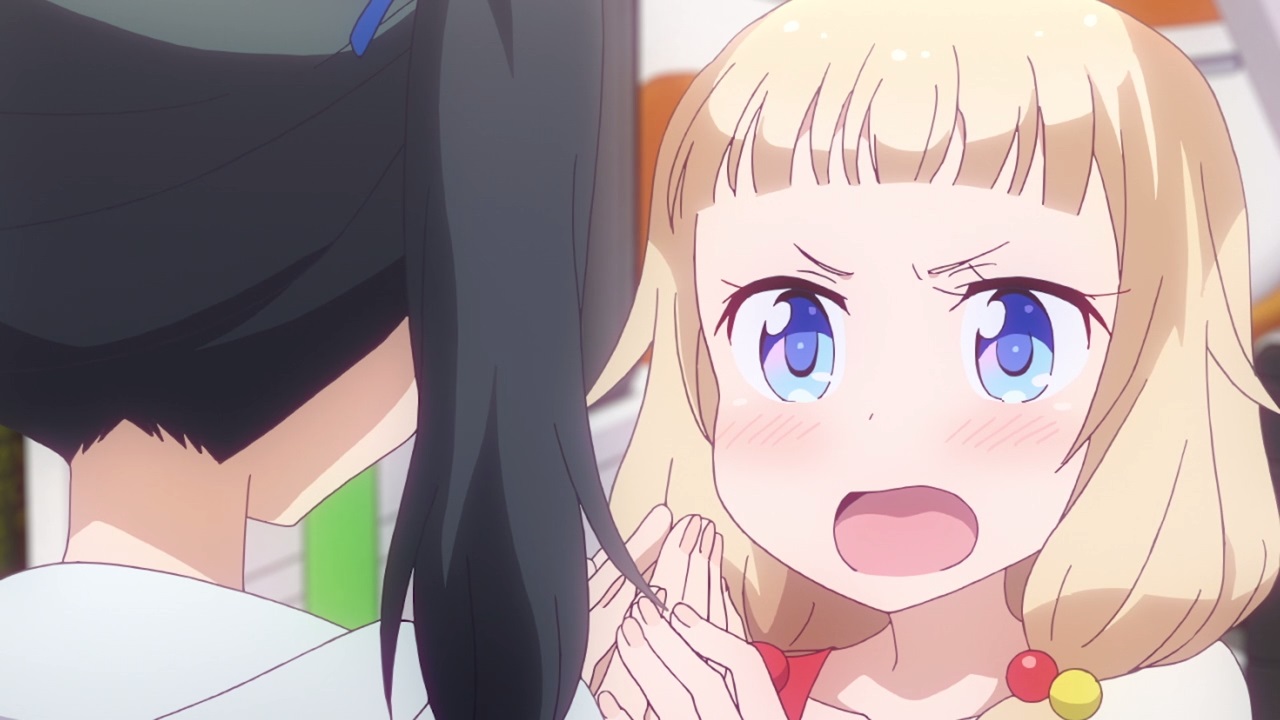 However, Nene Sakura said to Narumi not to give up as she’ll leave it to her when it comes to debugging Tsubame’s codes. Really Nene-chan, do you think that you can fix those bugs by yourself?

Still, Sakura will do her part of saving Narumi’s mini-games from the cutting room floor! 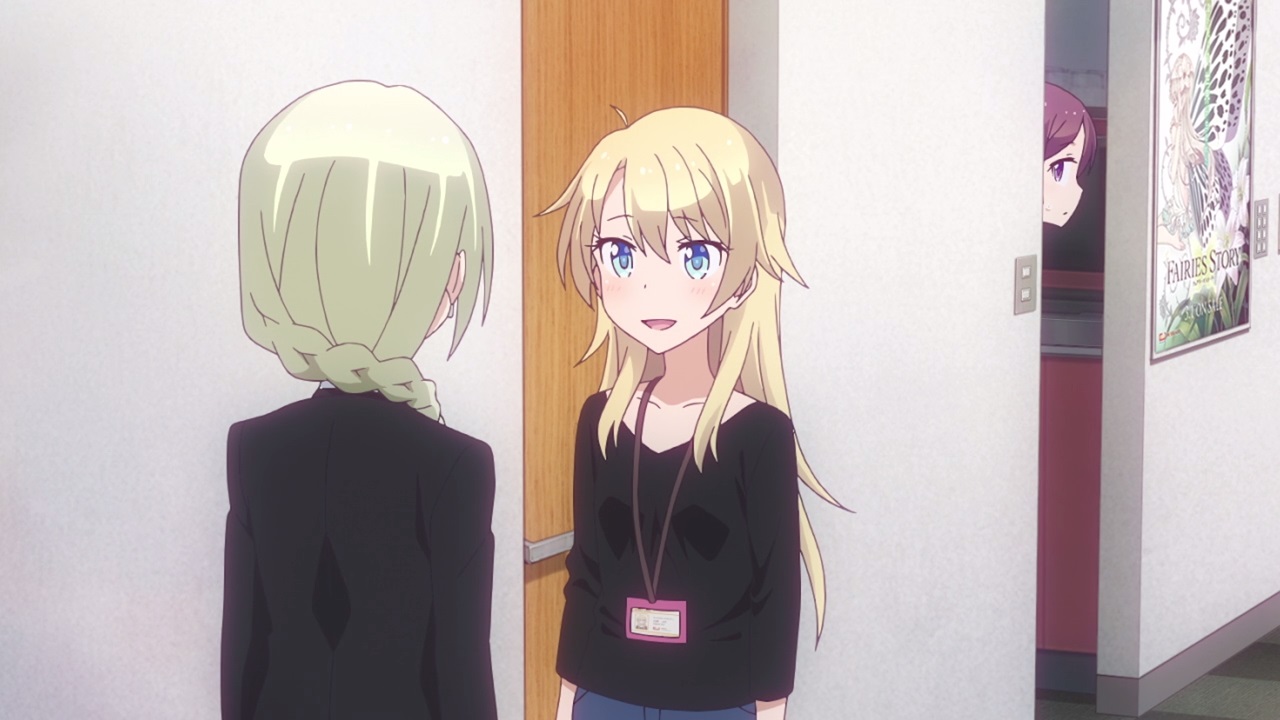 Meanwhile, Kou Yagami is talking to Christina Wako Yamato about her potential transfer to another company after staying at Eagle Jump for so long.

Then again, there are some people who are sad to see Yagami go. Case in point, it’s Rin Touyama and she’s gonna get lonely when Kou Yagami leaves Eagle Jump. After all, Touyama is in love with Yagami! 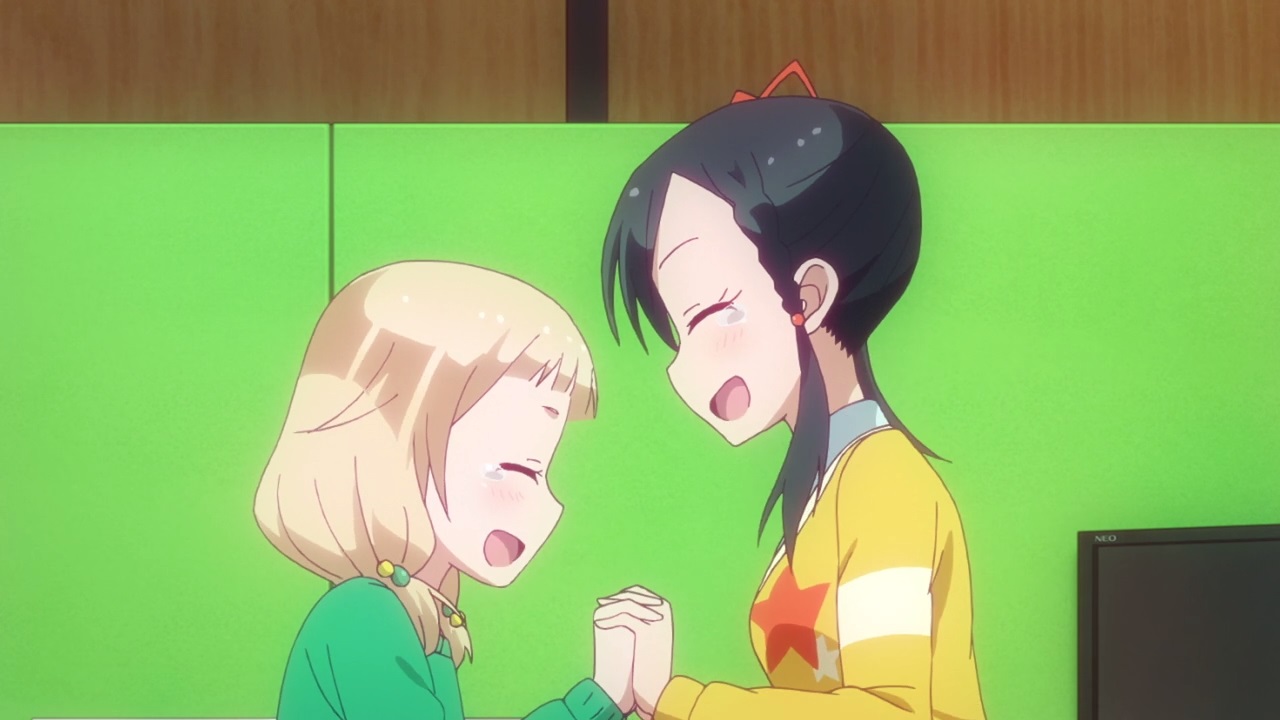 Anyways, it looks like both Nene Sakura and Tsubame Narumi are done with the debugging, which means that all of Narumi’s mini-games are glitch-free!

Oh and the best part, both of them got their contracts extended which is a great news for Sakura and Narumi! I mean, they did a good job on fixing those bugs after all. Now that the bugs are now ironed-out, PECO is ready for one final play-test before sending it to Houbundo. 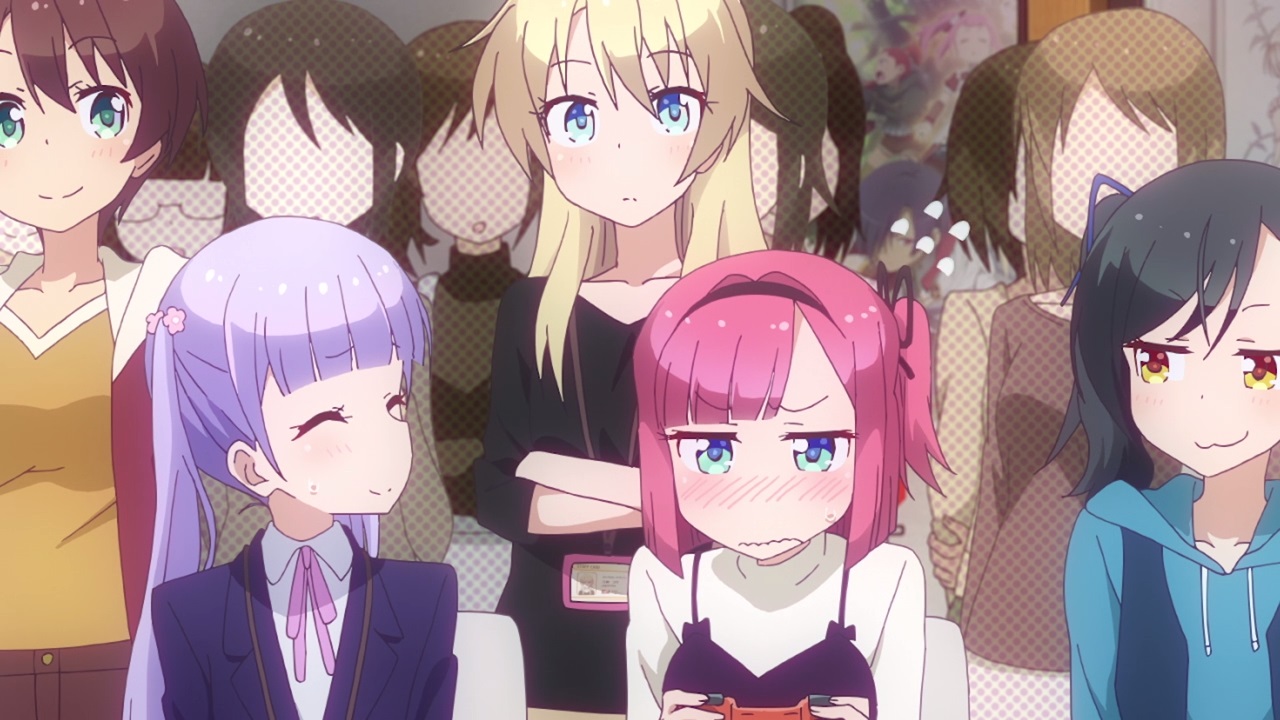 Oh yeah, and it seems that Momiji Mochizuki will be the first one to play Eagle Jump’s complete game before hitting the market. Gotta say that tons of hours working PECO from conception to finished product have finally paid off!

Now then, I can’t wait for Eagle Jump’s PECO to be released on the final episode. But then again, how will Aoba Suzukaze and the rest will react when Kou Yagami leaves Eagle Jump? We’ll find that out!