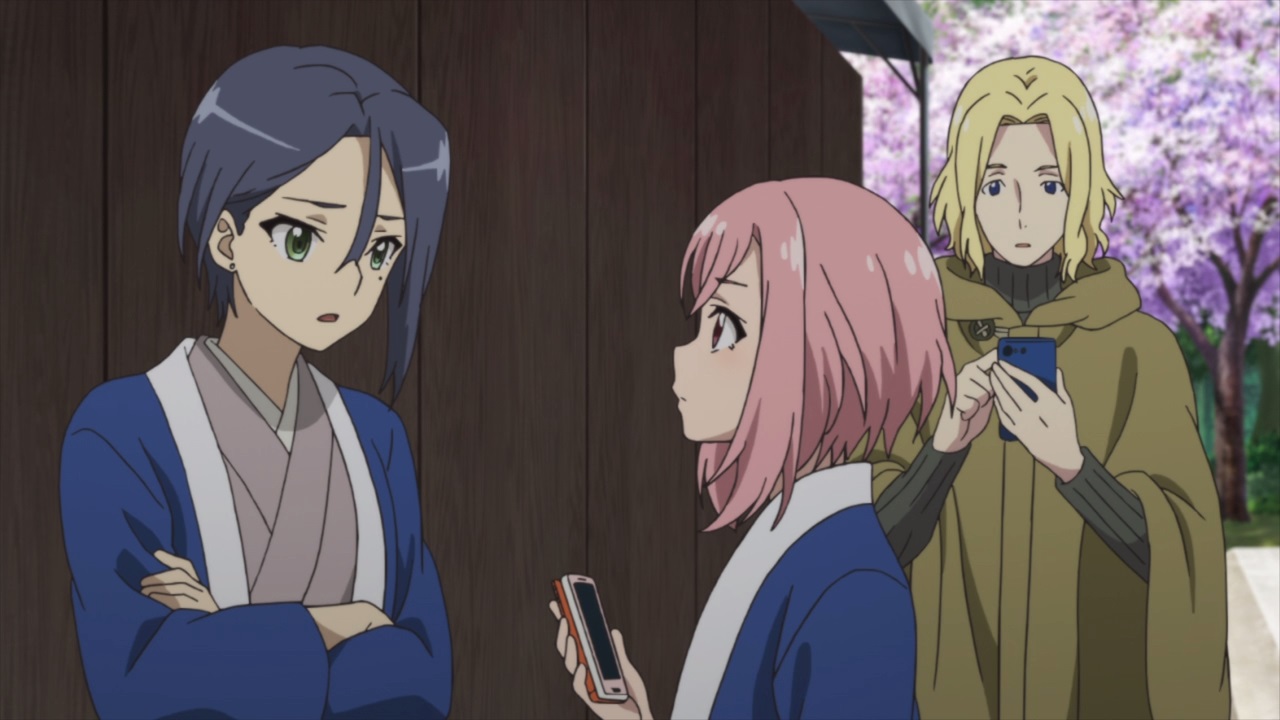 Well here it is, the finale of Sakura Quest as Maki Midorikawa and Yoshino Koharu are worried that Ushimatsu Kadota might ruin another Mizuchi Festival now that he went to Kanazawa to see Sandal’s friend Mayor Naumann for a possible partnership between his town and Naumann’s. 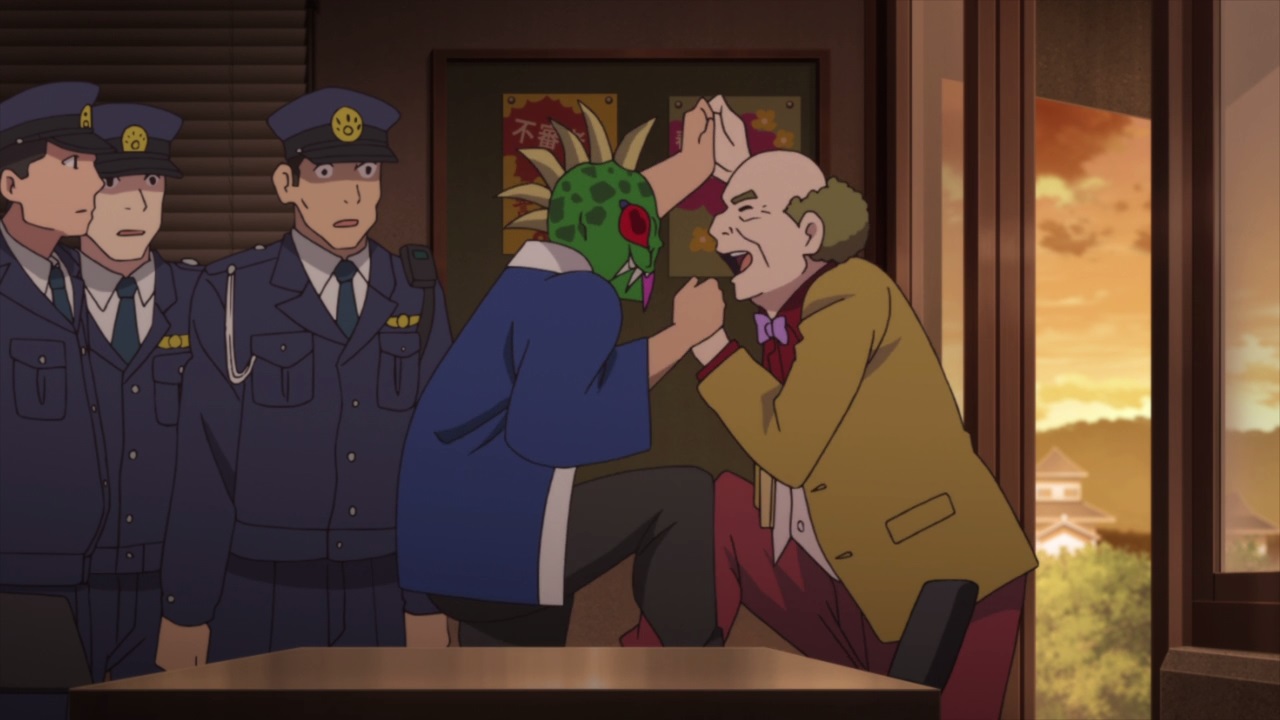 Fortunately for Kadota, he managed to find Mayor Naumann thanks to his Chupacabra headdress. Yeah, it never gets old!

Now that Ushimatsu-san has found the mayor, it’s time for him to go back to Manoyama and join the cast for the Dragon Song stage play. Still, I’m worried that he might not make it in time! 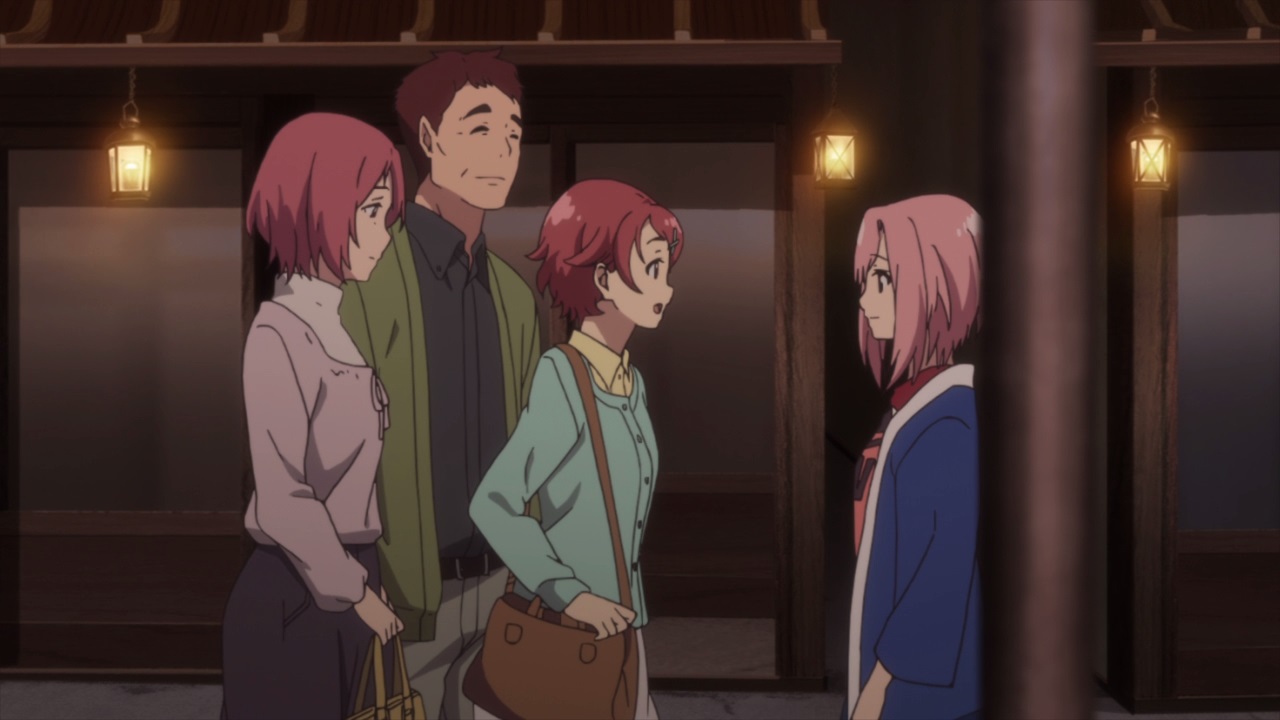 Meanwhile, Queen Yoshino saw her family as they’re visiting Manoyama for this occasion.

Yeah, they’re surprised that Yoshino is the queen of this town and let’s just say that she took pride on reviving this town! As much that I’ve admit, Yoshino Koharu fell in love with Manoyama as time passes. 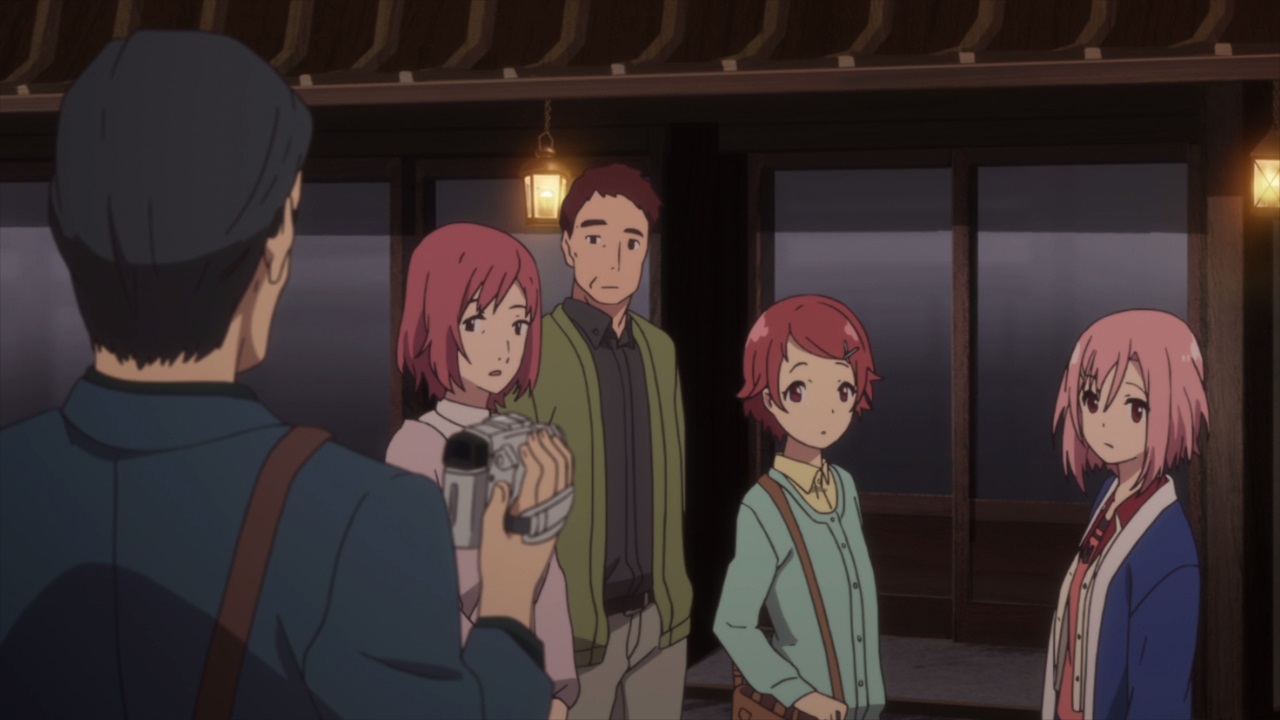 On the other hand, looks like Amamiya-san wants to take a video of Yoshino’s family because he likes to. 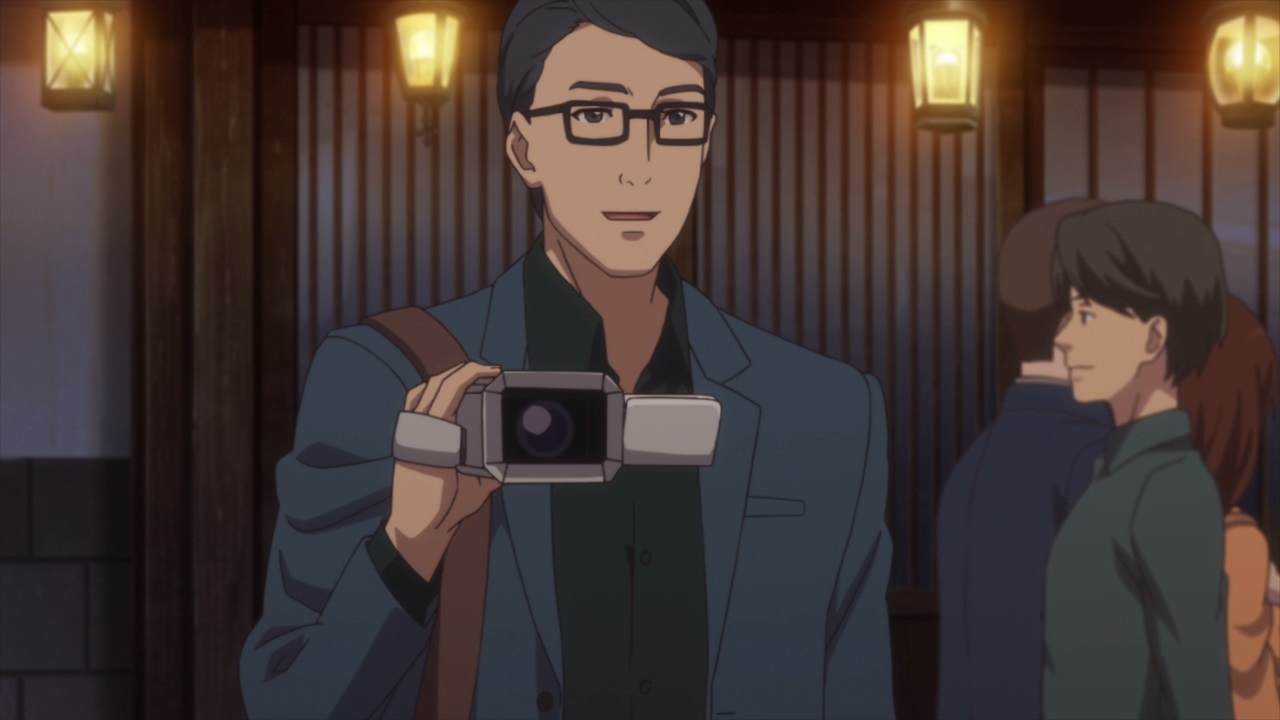 Unlike his boss Kume, Amamiya wants to show how amazing Manoyama is instead of being shown in an half-assed manner. Remember that Ptolemaios debacle? Amamiya won’t forgive his boss for that!

So yeah, seems that the Mizuchi Festival is going smoothly and Amamiya-san liked how his beloved town is being revitalized. Still, I’m worried about Kadota though as he’s not yet here for the stage play! 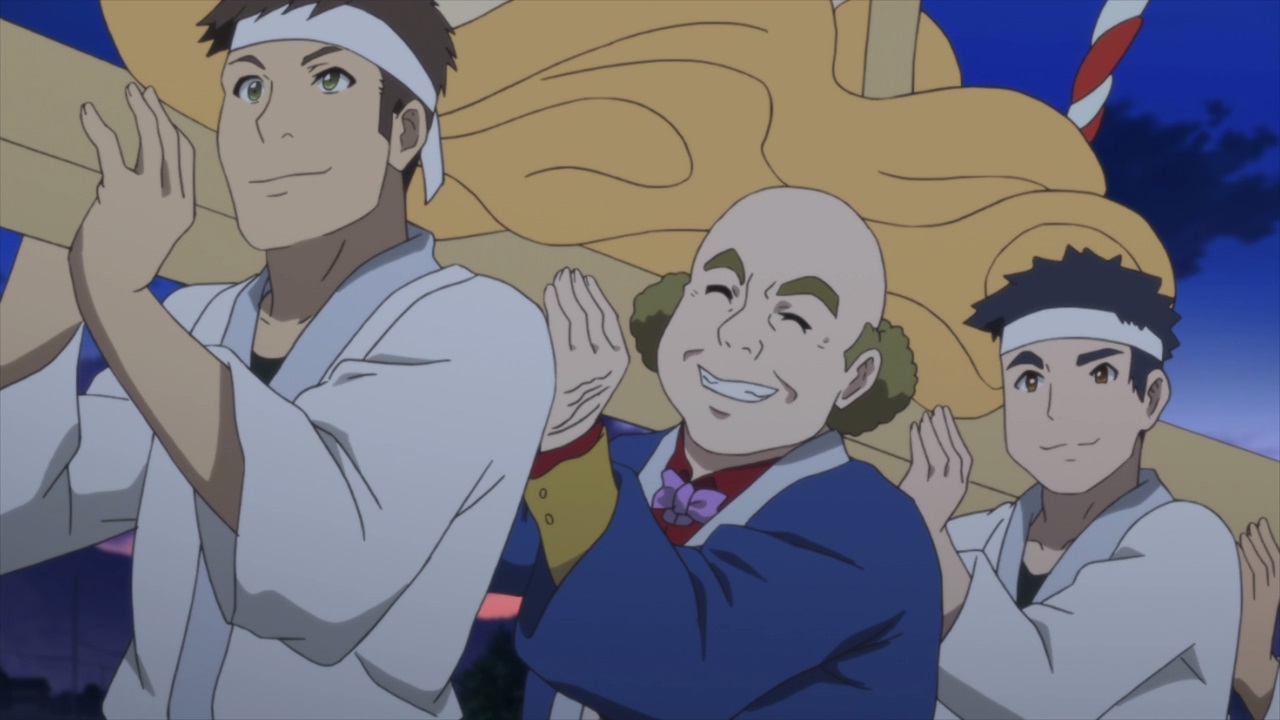 But for some reason, seems that he managed to bring Mayor Naumann as he’s currently carrying the shrine float. Silly Naumann, now where’s Ushimatsu-san? 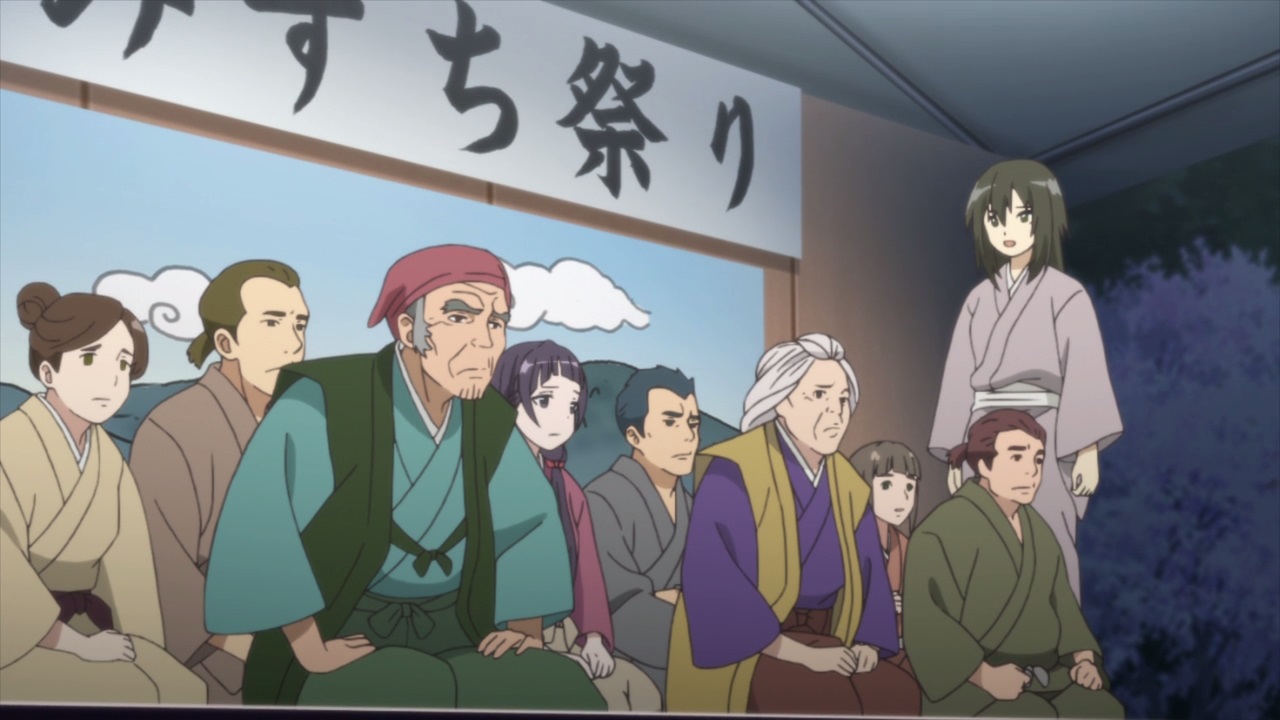 Oh, looks like he did make it in time for the stage play and we’re now at the climax of the story. I’m glad that Kadota managed to be here instead of ruining it like 50 years ago! 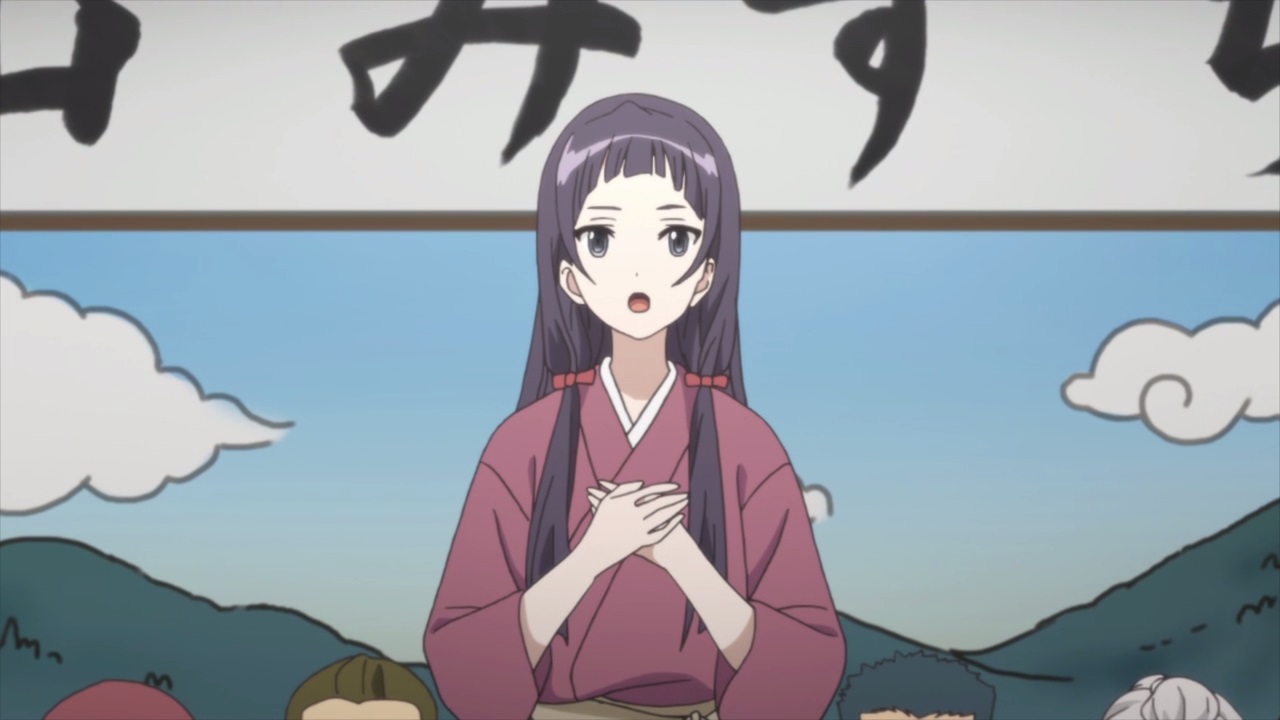 And since that we’re in the climax of the stage play, here’s Ririko Oribe as she sings the Dragon Song. How lovely for Ririko-chan to close this festival with a folk song from Manoyama!

With that said, the Mizuchi Festival is a success and I have to say it’s a fitting end for Manoyama as a separate town. 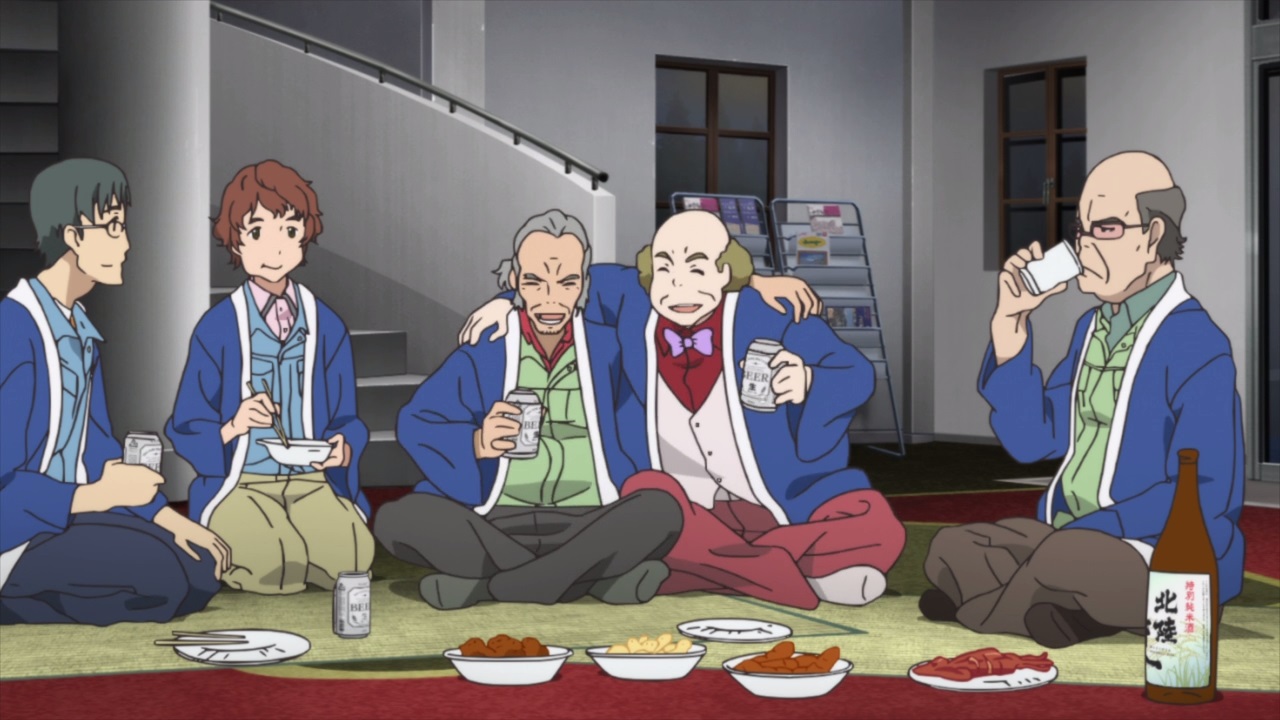 But then again, it seems that there would be talks of having Manoyama partner up with another town from overseas and become sister cities, which means that Manoyama might continue as a separate town instead of being part of Tomikura.

Then again, I feel that Ushimatsu Kadota might needs some help from Mr. Sandal since he communicate with Mayor Naumann very well. For now, seems that both Kadota and Naumann have become friends! 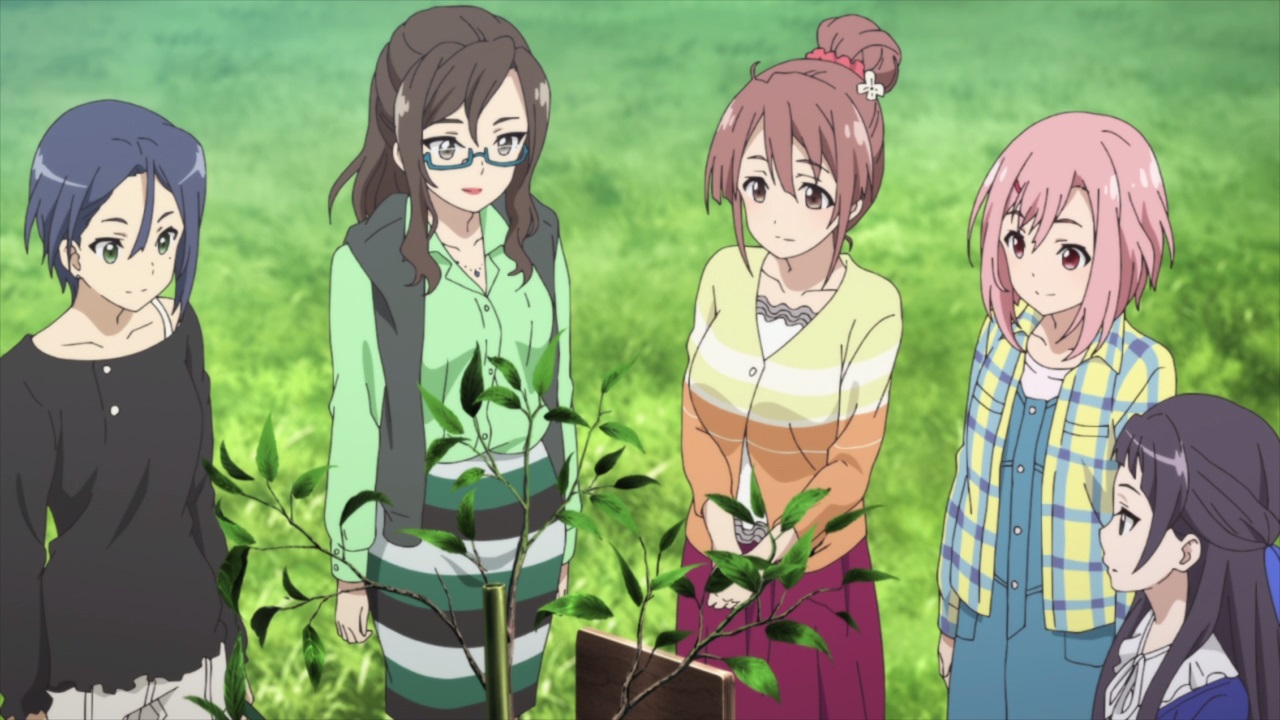 And here’s Queen Yoshino Koharu and her royal court as they now look forward for their future path. While most of them might stay in Manoyama such as Maki Midorikawa, Shiori Shinomiya, and Sanae Kouzuki, it appears that Ririko Oribe plans to travel and explore outside Manoyama. Maybe she can put her talent to good use when Ririko goes to Tokyo!

But as for Yoshino Koharu, she’ll be leaving Manoyama with good memories as she abdicates the throne permanently, thus signifying the end of the Kingdom of Chupakabura. Yeah, we’ll sure missed that silly kingdom, but the good news is that Manoyama will continue to thrive thanks to Yoshino’s effort. Of course, Yoshino Koharu’s adventure continues as she goes to another town and revive it to its former glory.

And that concludes P.A.Works’ Sakura Quest where I must say that the studio put a lot of effort on this show, making it one of the best this season. With that said, time to say goodbye to Yoshino Koharu and her friends!