Posted on October 3, 2017 by benigmatica 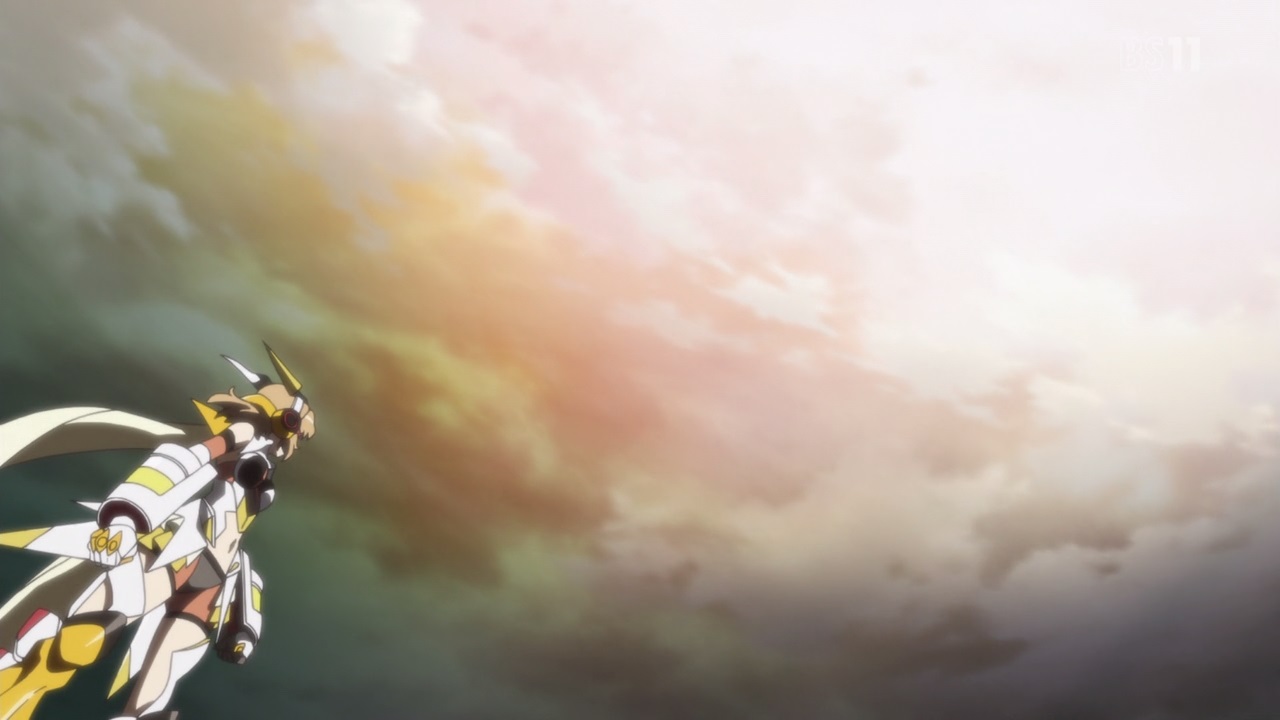 Well everyone, it’s confirmed that Saint-Germain and her fellow alchemists have sacrificed their lives to stop a nuke from destroying Tokyo.

Yeah, we’ll sure miss those alchemists, but Hibiki Tachibana felt regret that she couldn’t rescue them! 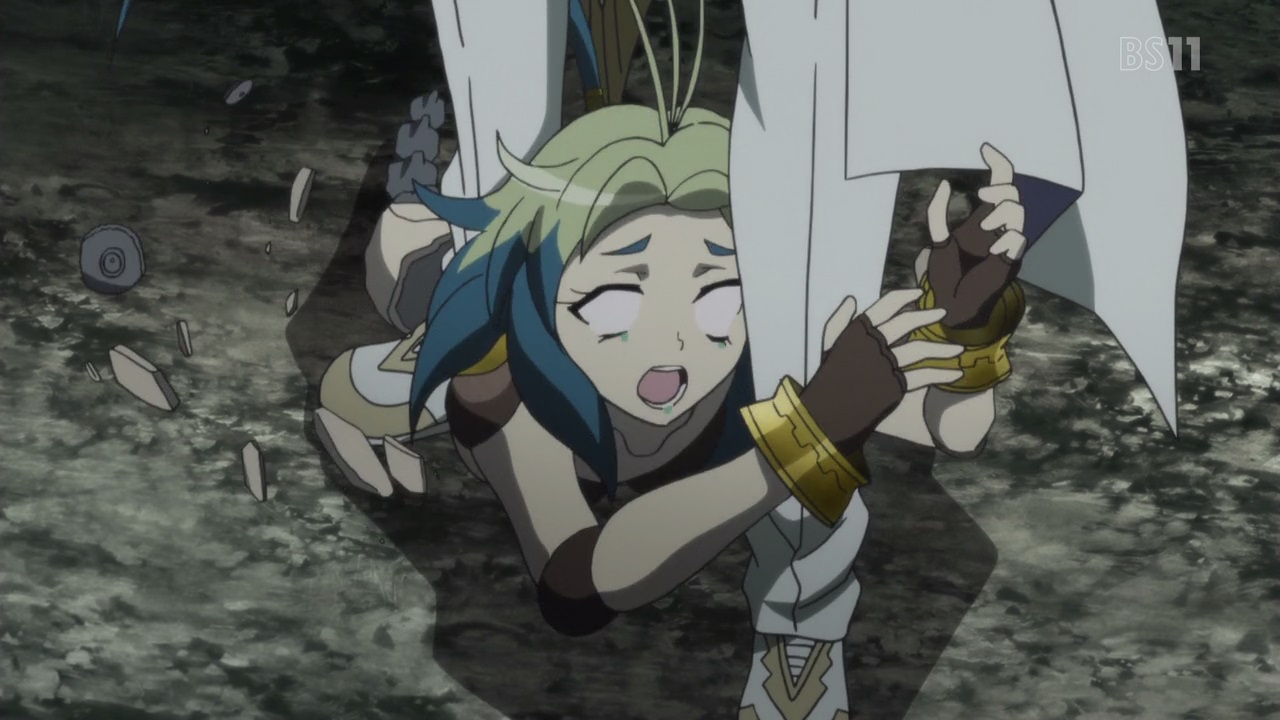 On the other hand though, let’s not forget that Adam Weishaupt is still standing as he stomped Tiki until she’s completely destroyed. Bastard! 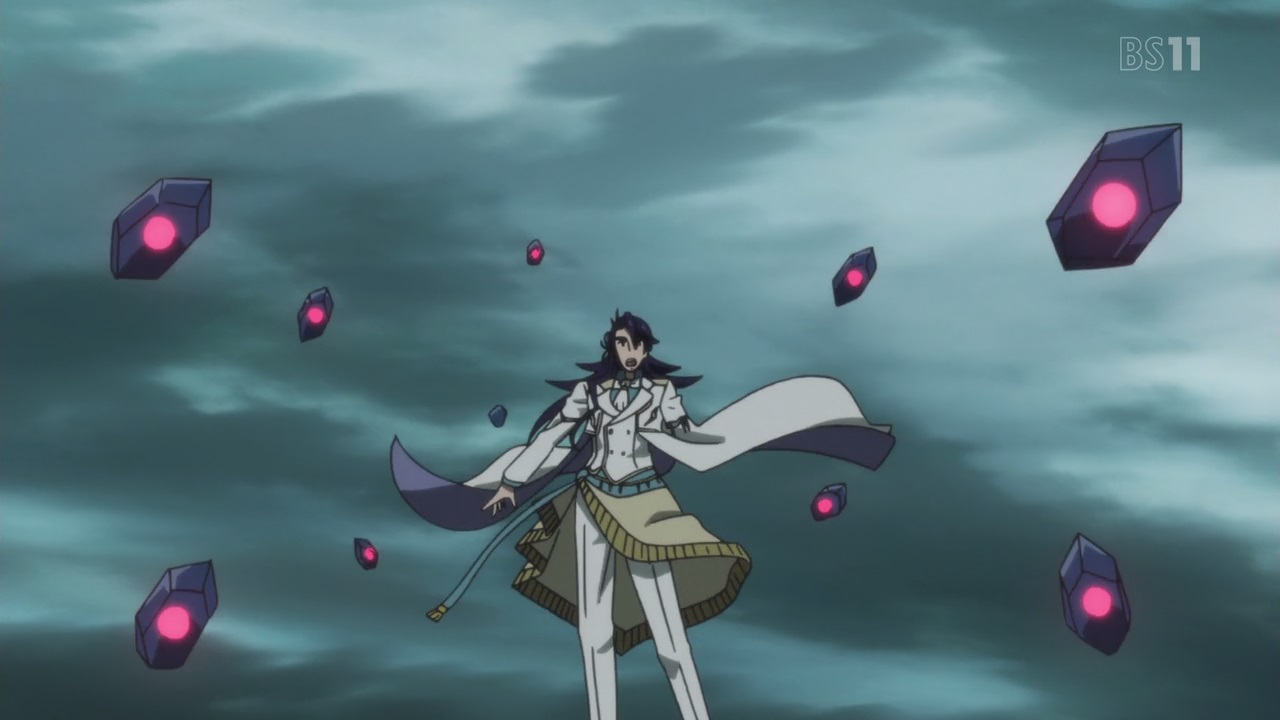 And with that said, the Lodgemaster has decided that if he can’t have divine power to stand against the Centurions and rule the world, Adam Weishaupt will just destroy everything.

By the way, the Centurions or the Anunnaki would become the main antagonists on the next season. But for now, the Symphogear users will have to deal with Adam and his horde of Alca-Noise! 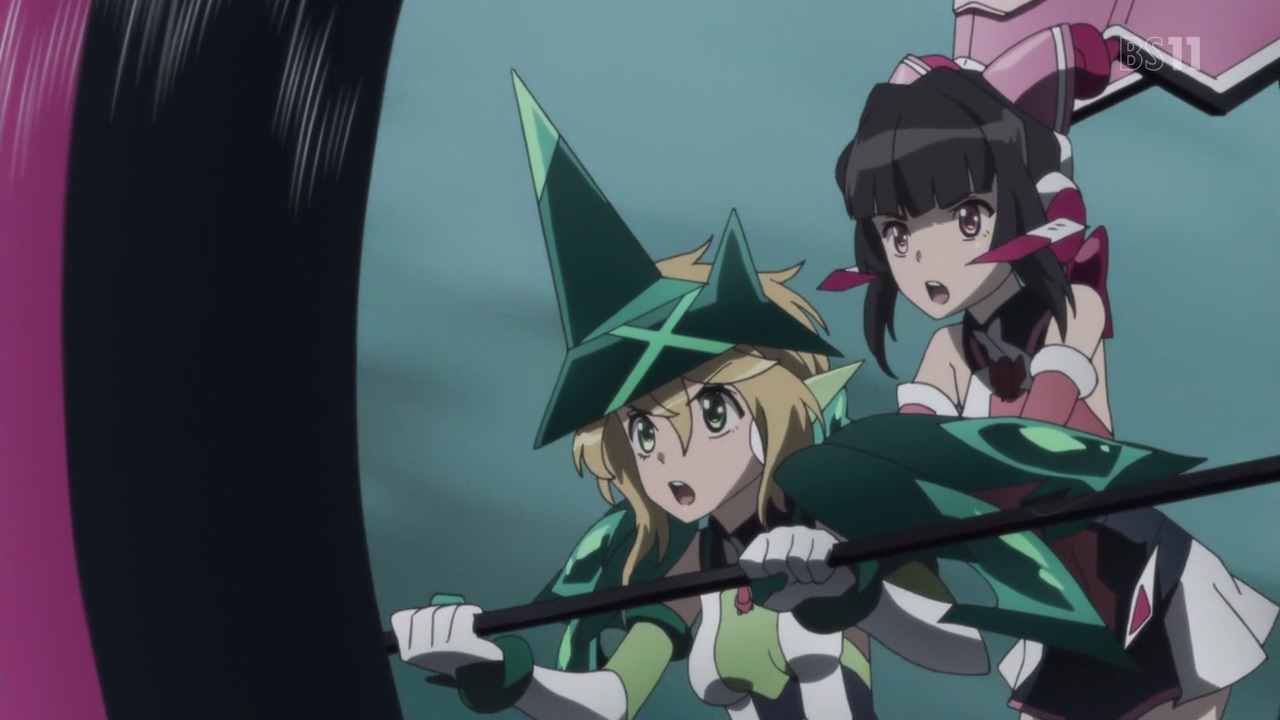 Anyways, let’s start taking out those grunts as Kirika Akatsuki and Shirabe Tsukuyomi combined their powers… 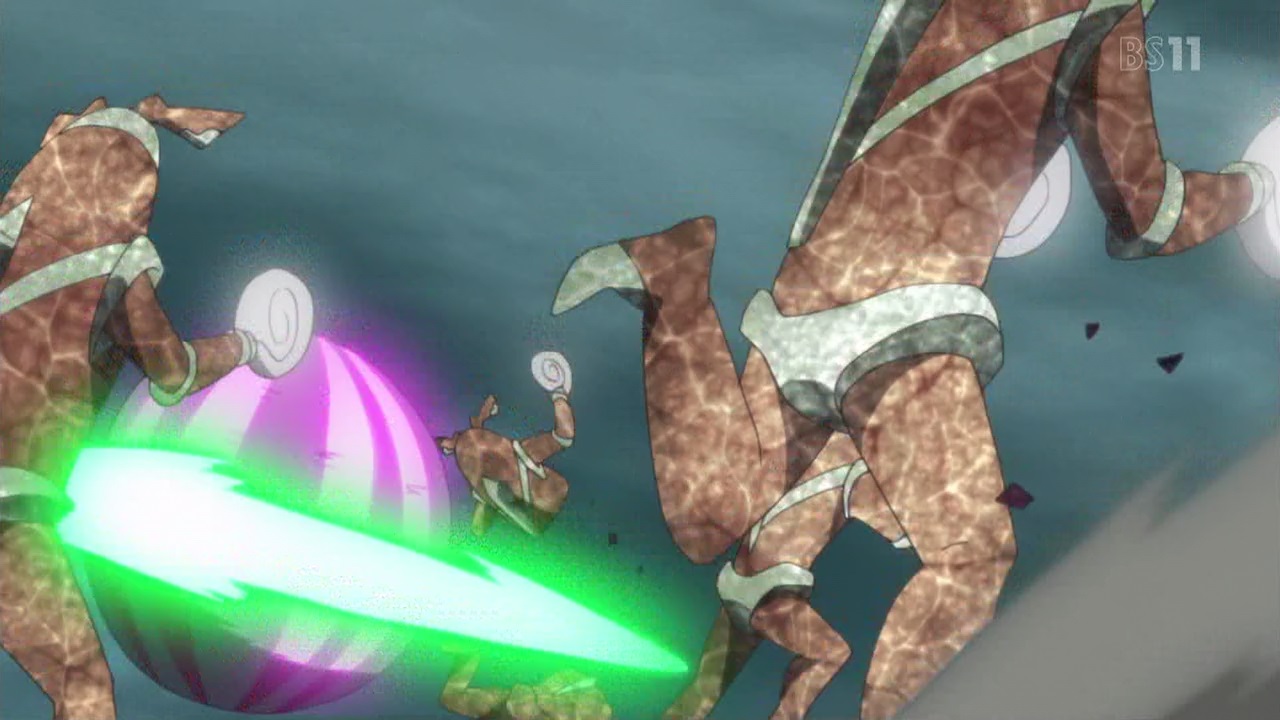 …and make a hurricane against the Alca-Noise. Gotta say that it looks like a spinning ball with blades! 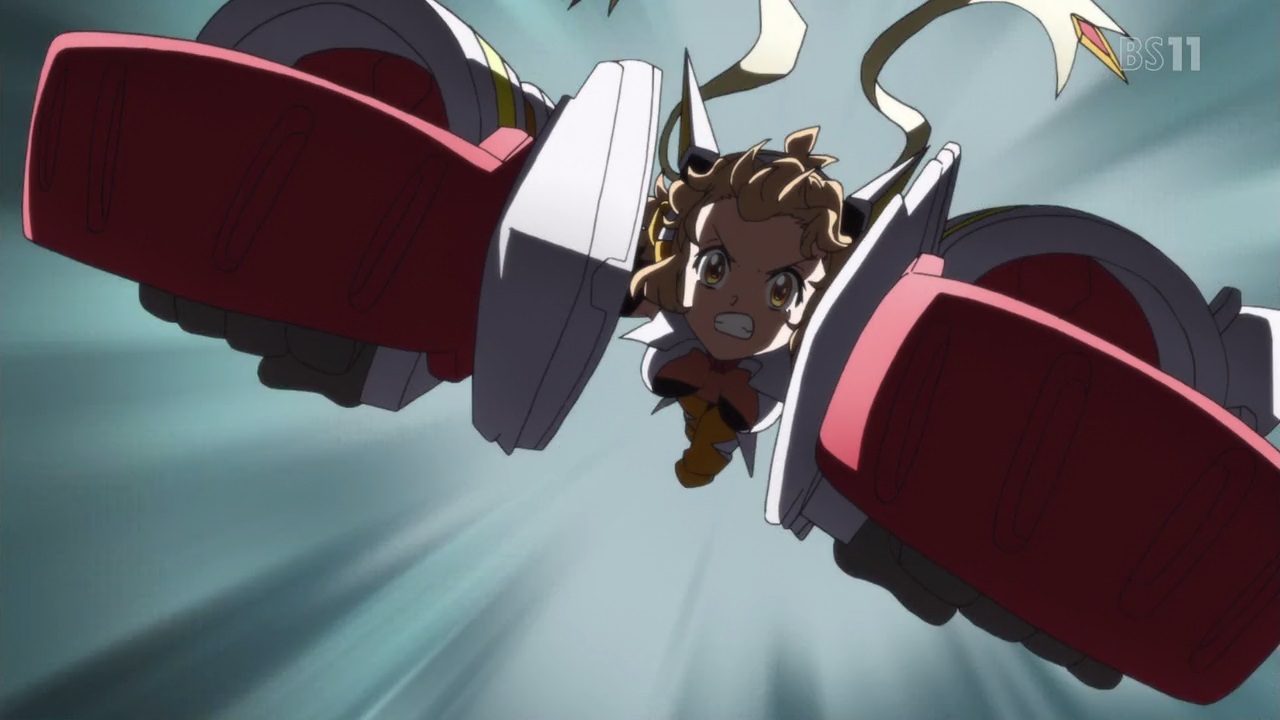 And here’s Hibiki Tachibana as she’ll deliver her devastating fists towards the Lodgemaster. After all, her punches are the only thing that can stop Adam Weishaupt! 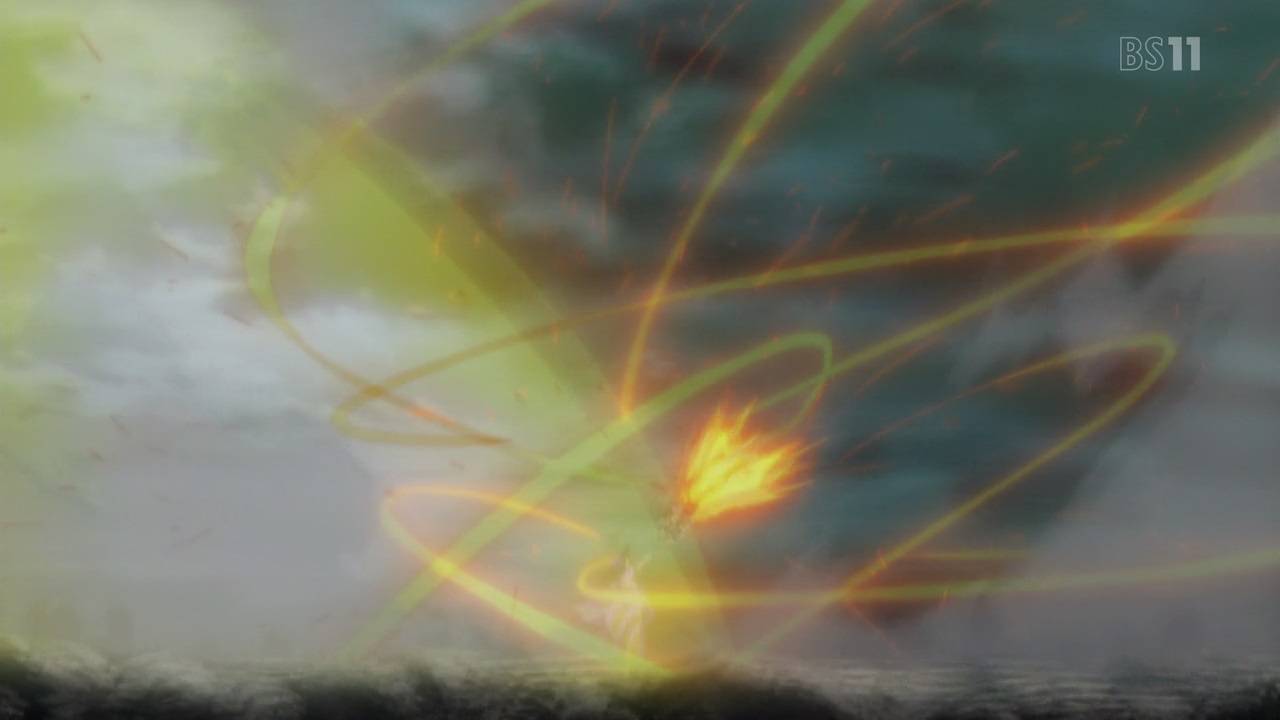 Soon, Hibiki’s fists have clashed with Adam’s barrier but unfortunately for the wielder of Gungnir, her punches aren’t enough to beat the Lodgemaster. 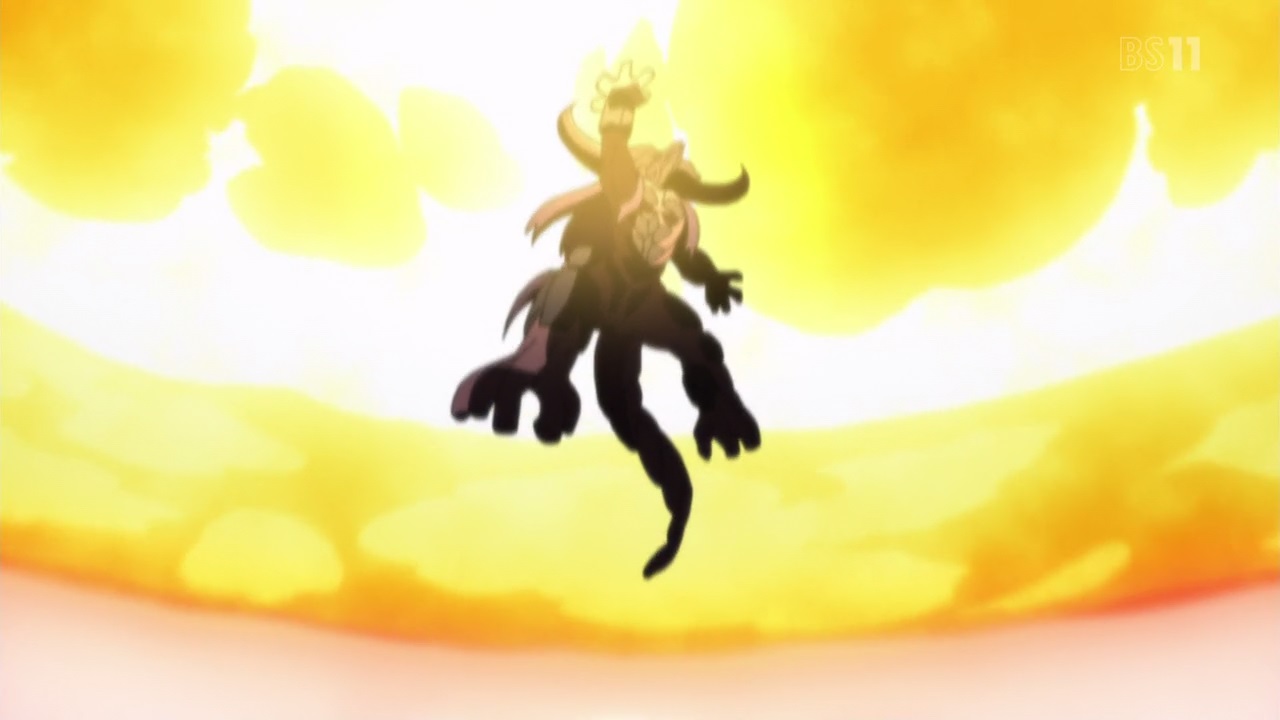 That’s because Adam Weishaupt transformed into his true form and damn, he’s ugly as fuck! It’s no wonder why Adam wanted to have divine powers because he wanted to looked good.

Still, Adam is very dangerous as he’s gonna throw another giant fireball at the Symphogear users! 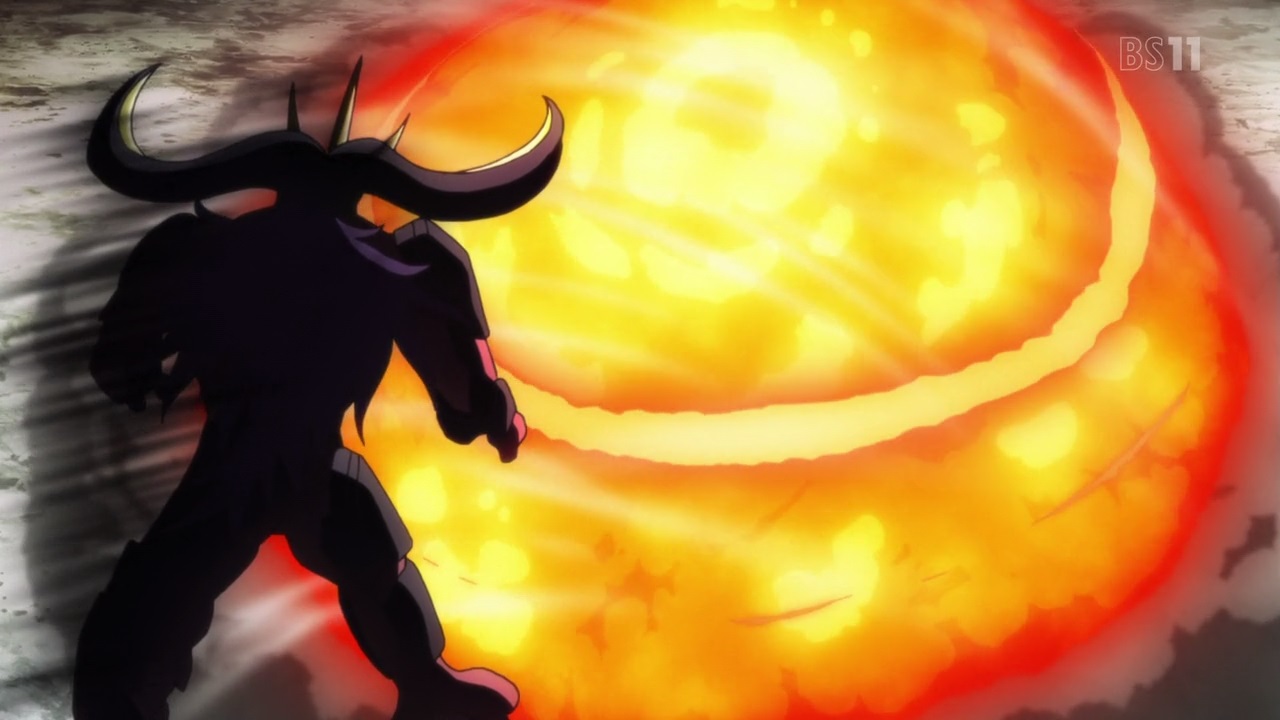 And look, seems that Hibiki and her friends are completely wiped out. Dammit, Adam Weishaupt!

But then again, I don’t think the Symphogear users will die easily… 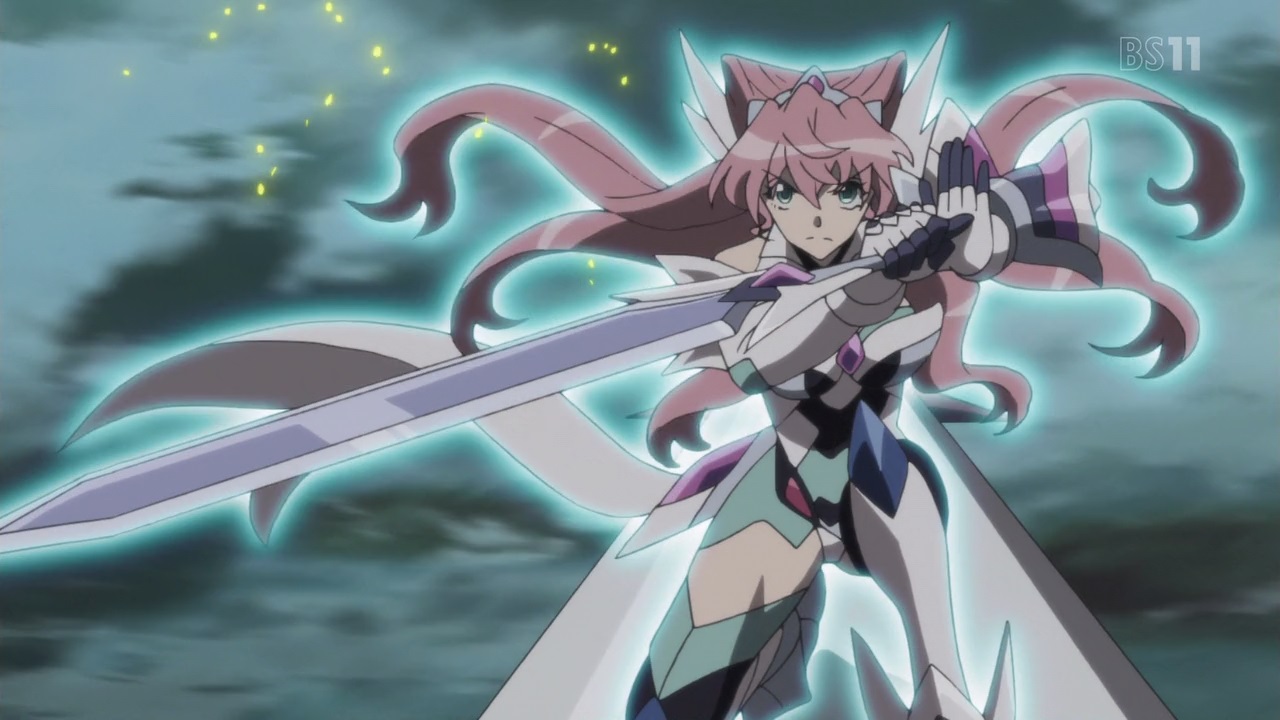 In fact, let’s just say that they managed to activate their Ignite Module at the right time as Maria Cadenzavna Eve… 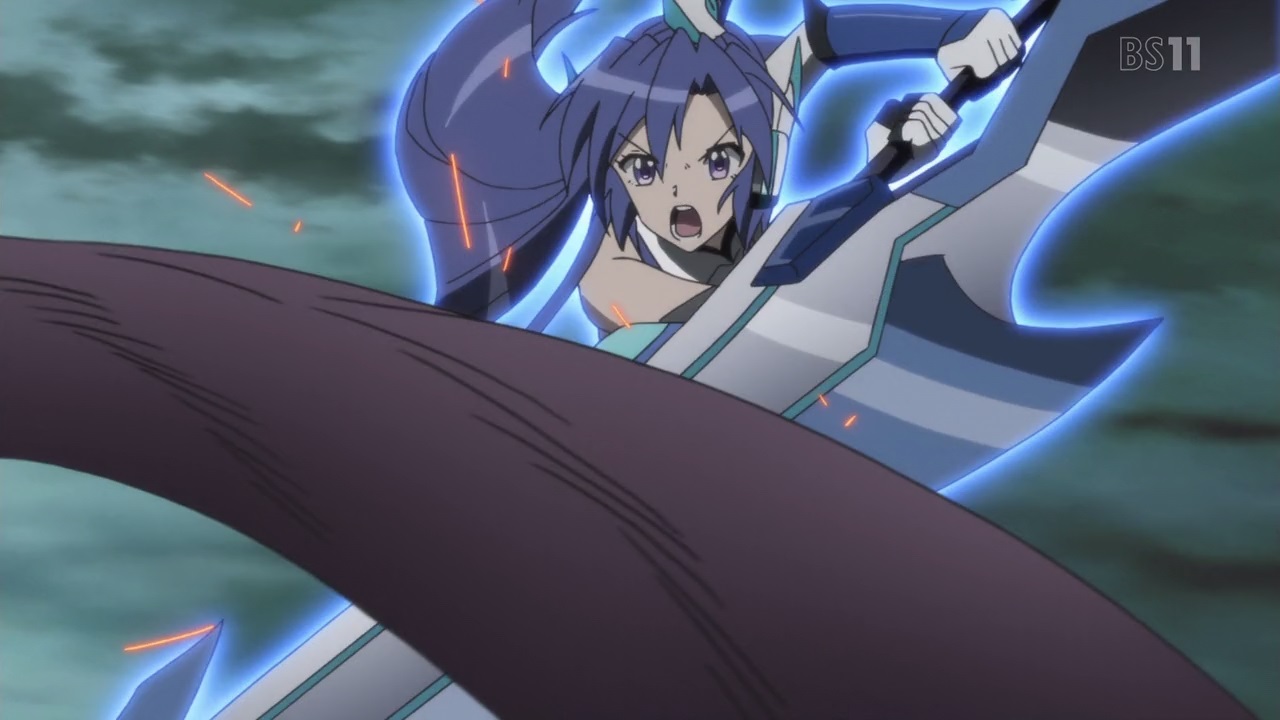 …and Tsubasa Kazanari are here to weaken the Lodgemaster. They have one shot though because their X-Drive form won’t last long. 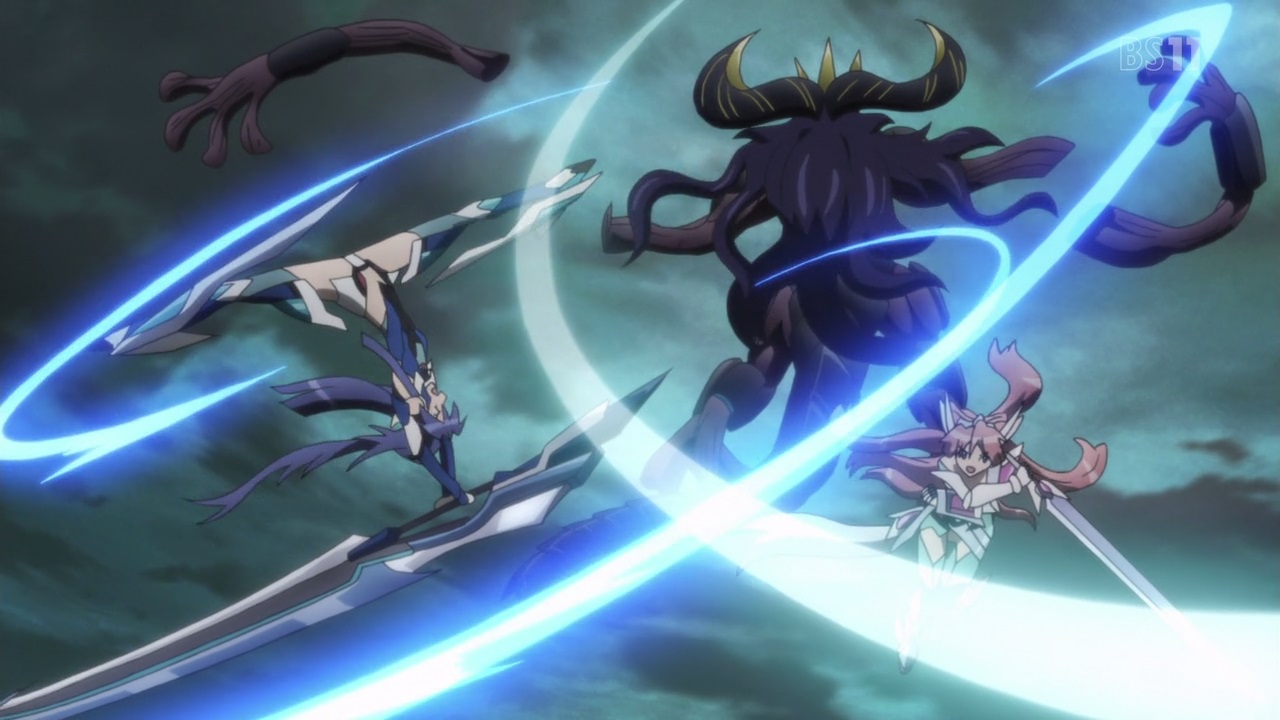 But hey, both Maria and Tsubasa-san have managed to cut down Adam Weishaupt’s limbs. Then again, it’ll grow back good as new! 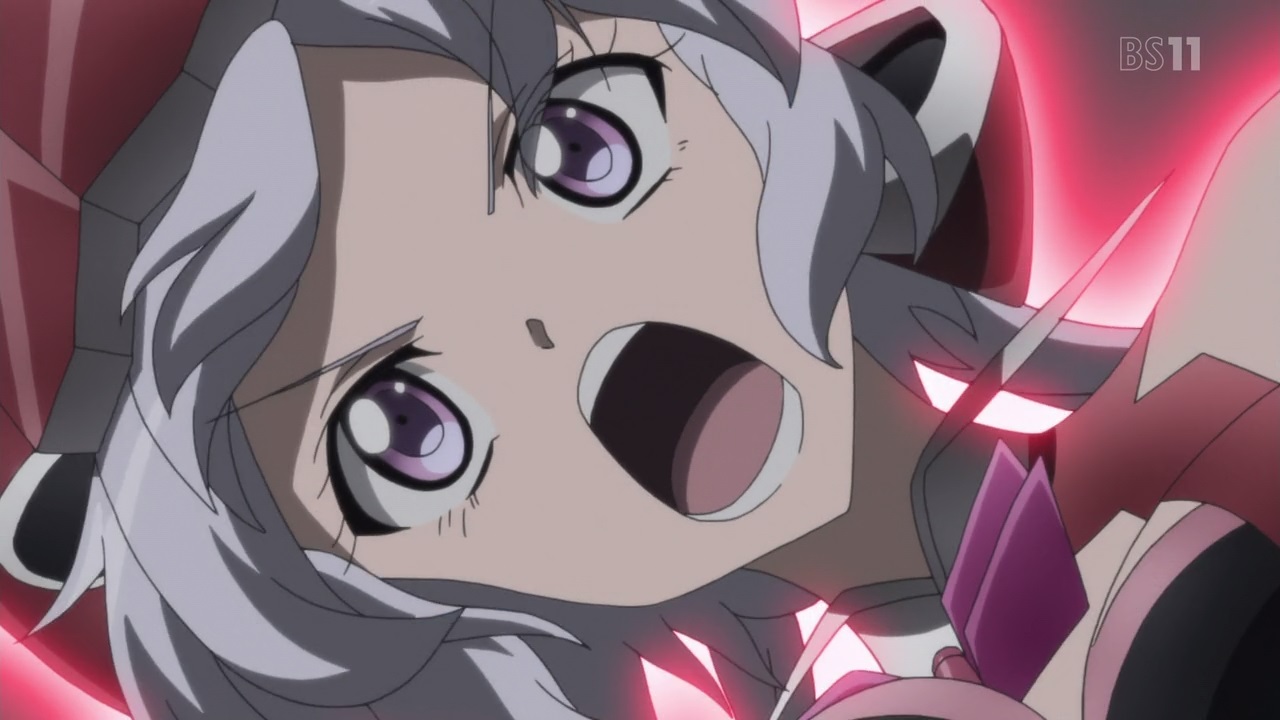 Of course, there’s more to come from the Symphogear users as Chris Yukine unleashed her payload of missiles, rockets, and other ordnance! 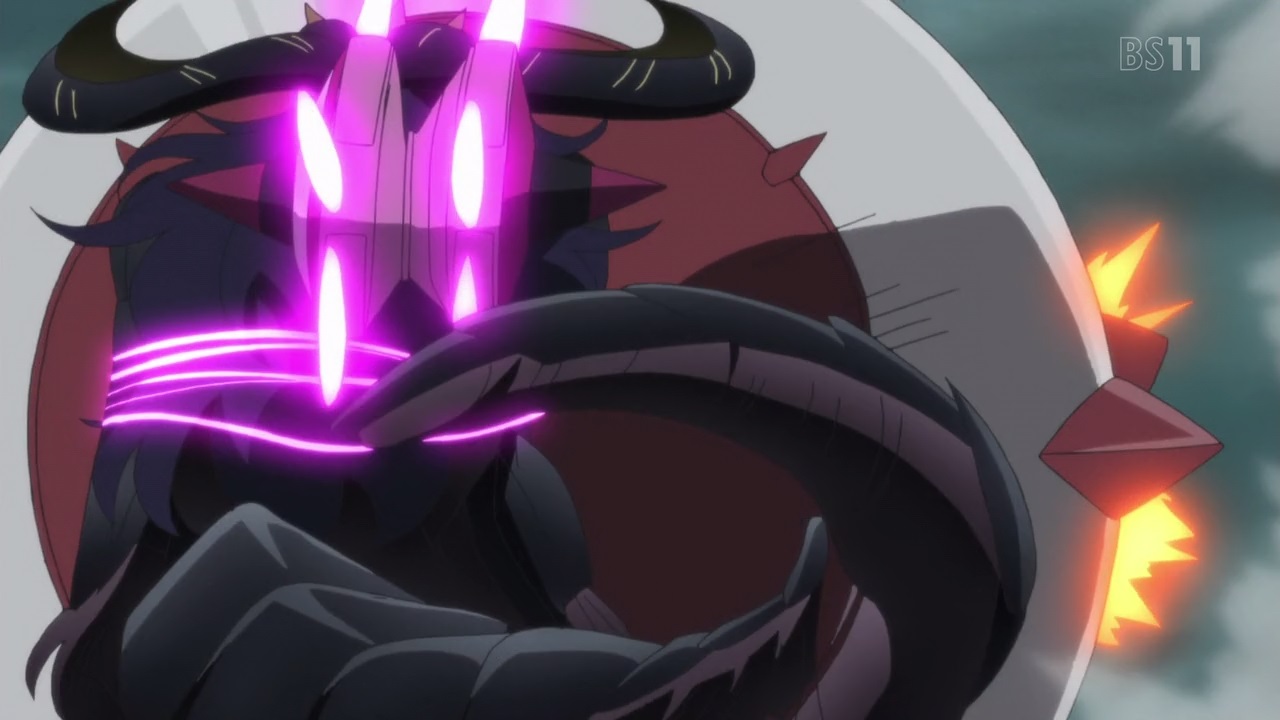 Heck, Chris-chan fired a giant missile towards the Lodgemaster for maximum damage… 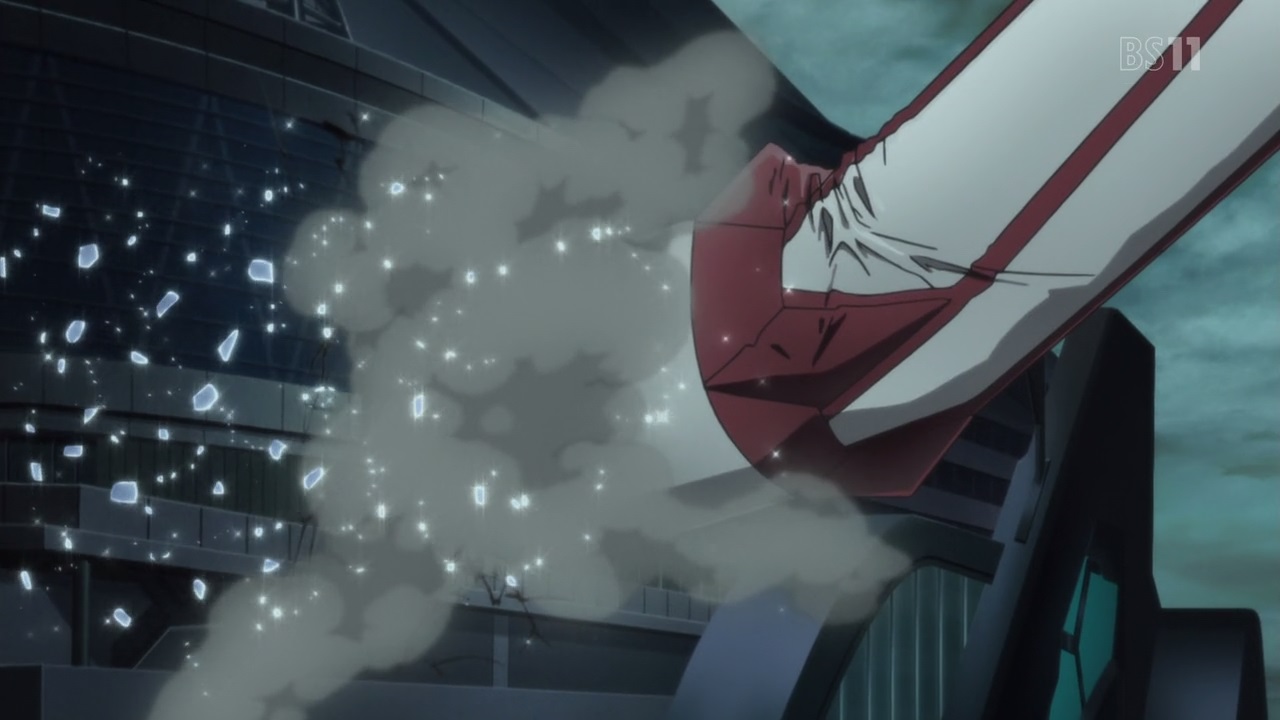 …which in turn destroyed a portion of the Saitama Super Arena. Well, there goes the venue for Symphogear Live 2018, but then again they could perform somewhere like the Yokohama Arena or even the Budokan!

Still, it appears that Chris Yukine’s giant missile couldn’t put the Lodgemaster down. 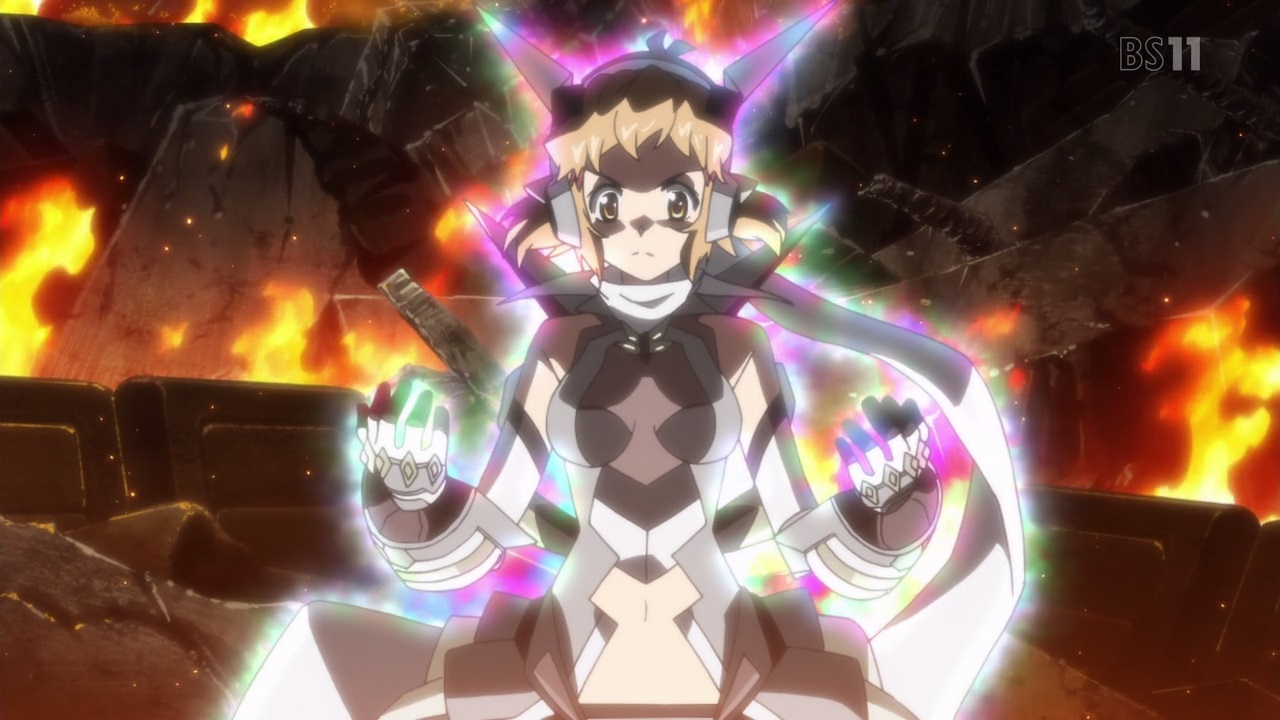 Luckily, there’s one person who can stop Adam Weishaupt as Hibiki Tachibana has powered-up. And as you can see, her armor is not only covered in rainbows… 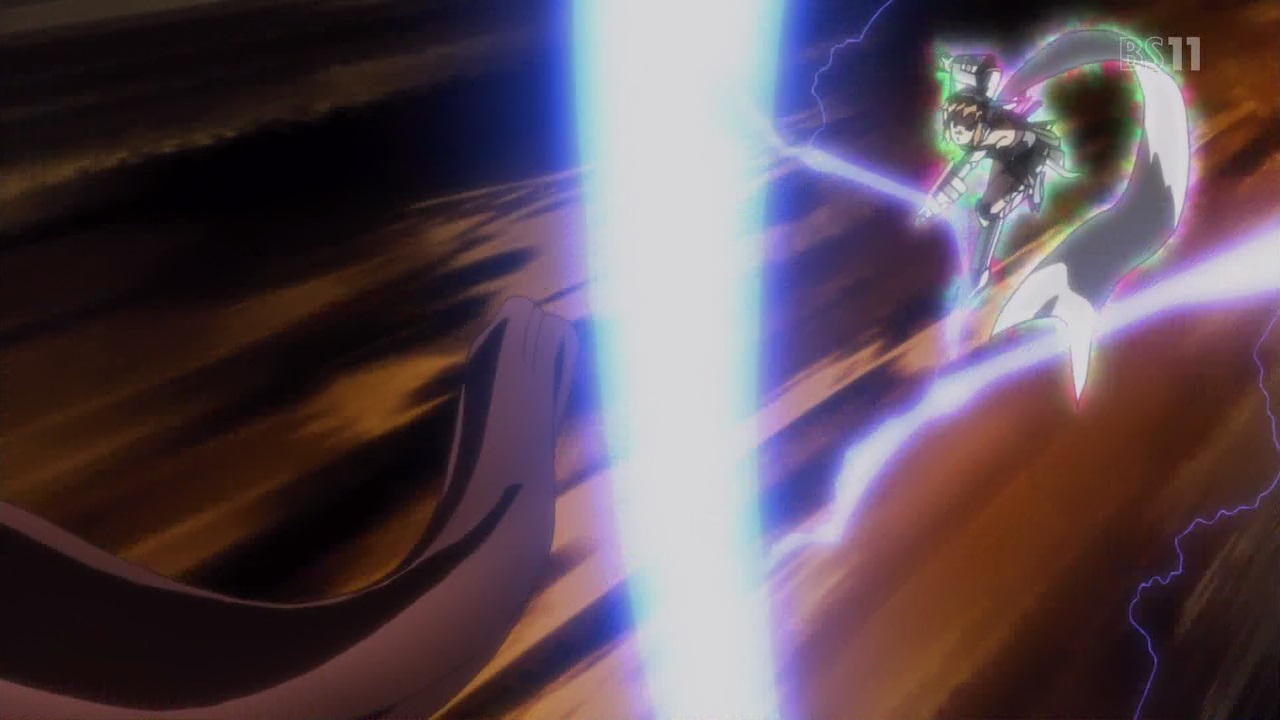 …but Hibiki can use all of her powers from her fellow Symphogear users. Yeah, she’s becoming like Rockman/Megaman with all of the relics’ powers in her hands! 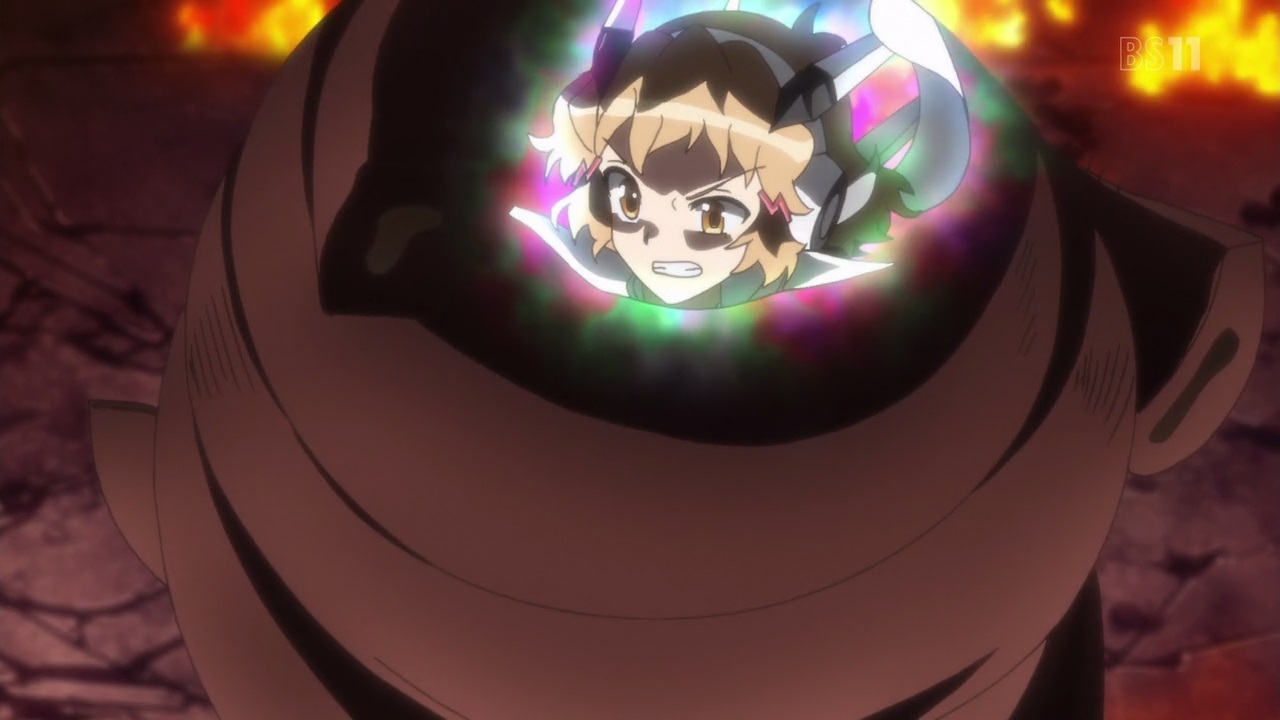 But then again, her powers aren’t enough to beat Adam Weishaupt, let alone break free from the Lodgemaster’s grasp.

Well, there’s only one thing left to do for Hibiki Tachibana… 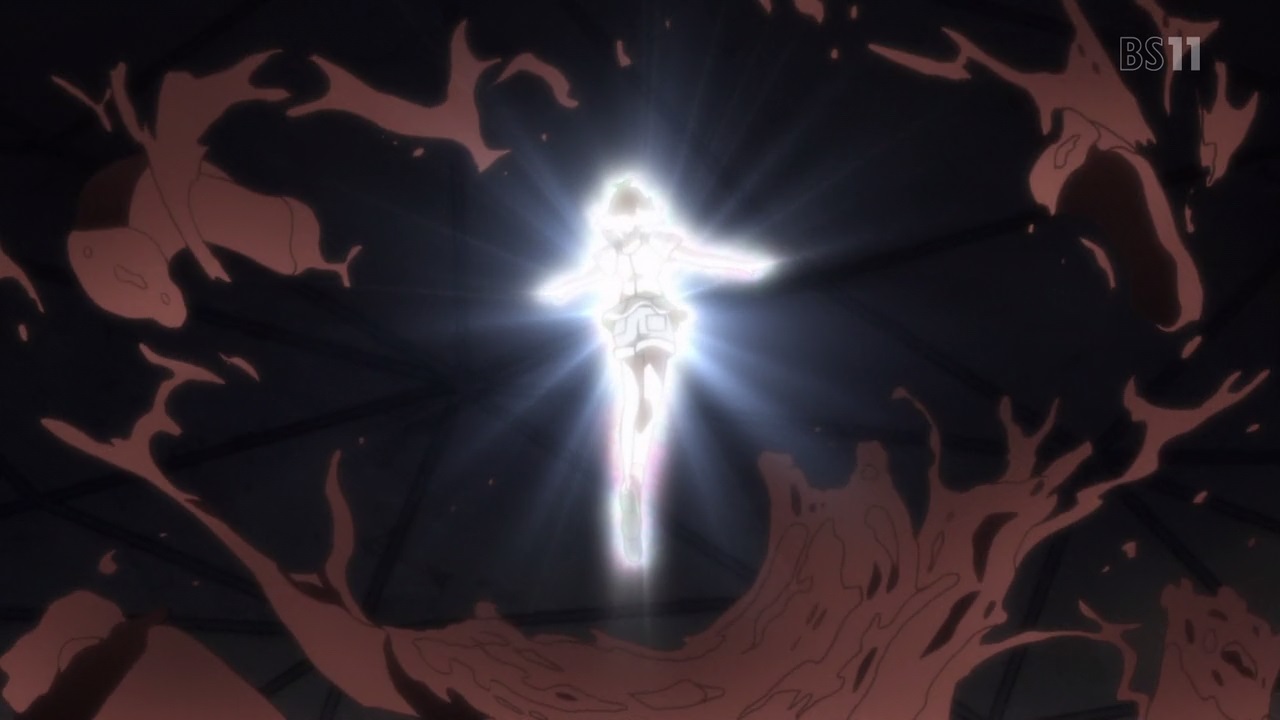 And that’s purging her armor to break free from Adam Weishaupt. It’s better than being devoured by the Lodgemaster! 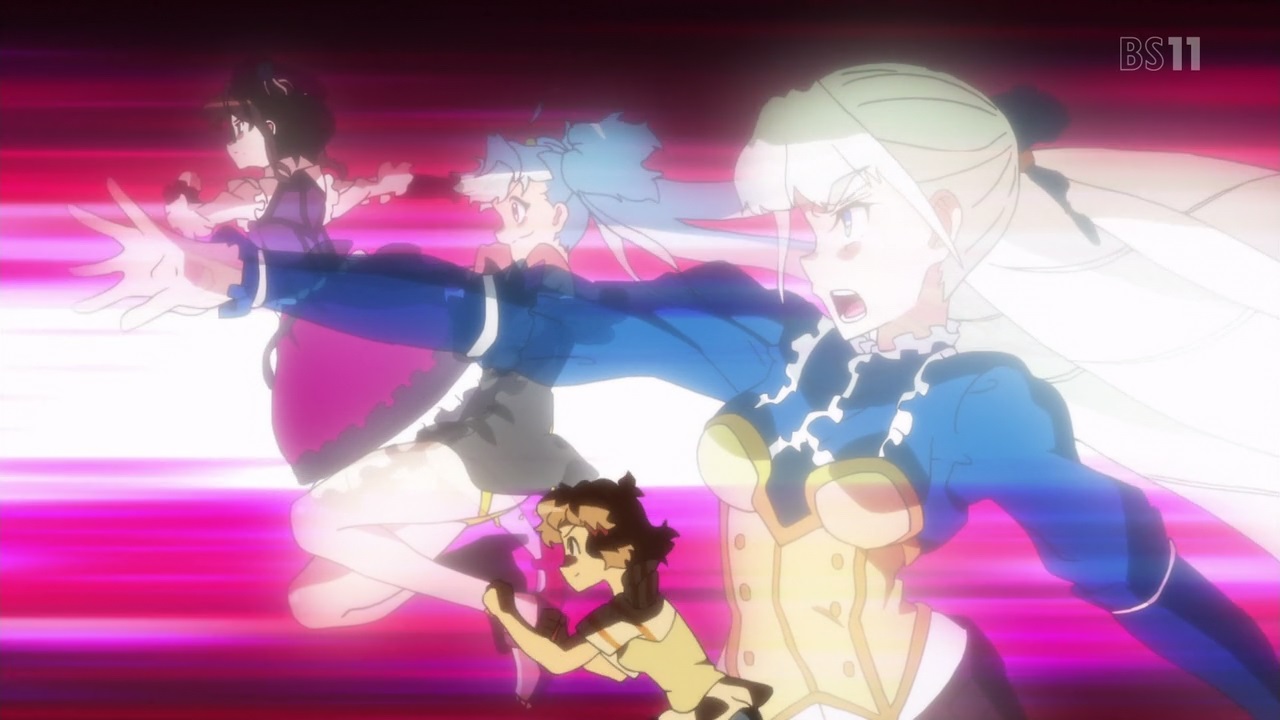 One more thing, seems that the alchemists have lend Hibiki a hand on stopping Adam Weishaupt once and for all.

Sure that they’re gone, but their spirit lives on to save humanity from the curse of balal. Of course, it’ll be Hibiki and her friends who’ll carry Saint-Germain’s mission on saving the world. 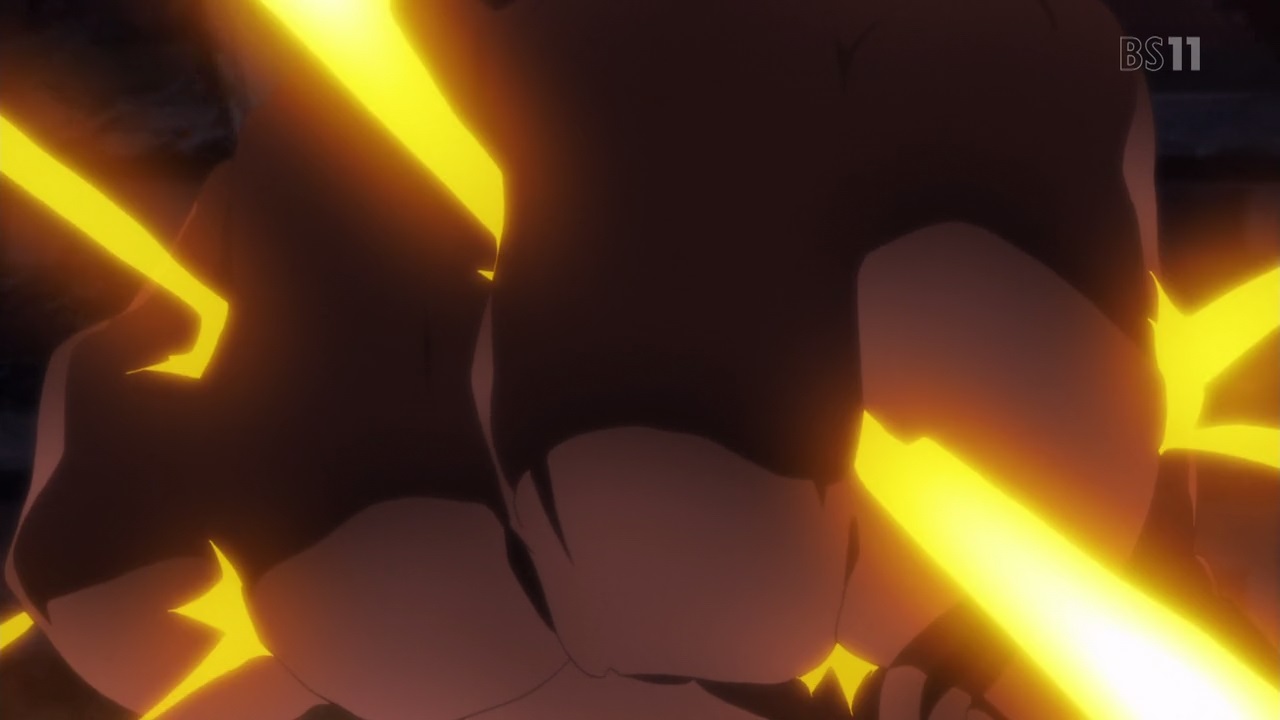 Then again, Adam Weishaupt won’t let a mere human like Hibiki do as she pleases as the Lodgemaster crushed Tachibana with his giant hands.

Unfortunately, it didn’t work for Adam as his hands will just burst out! 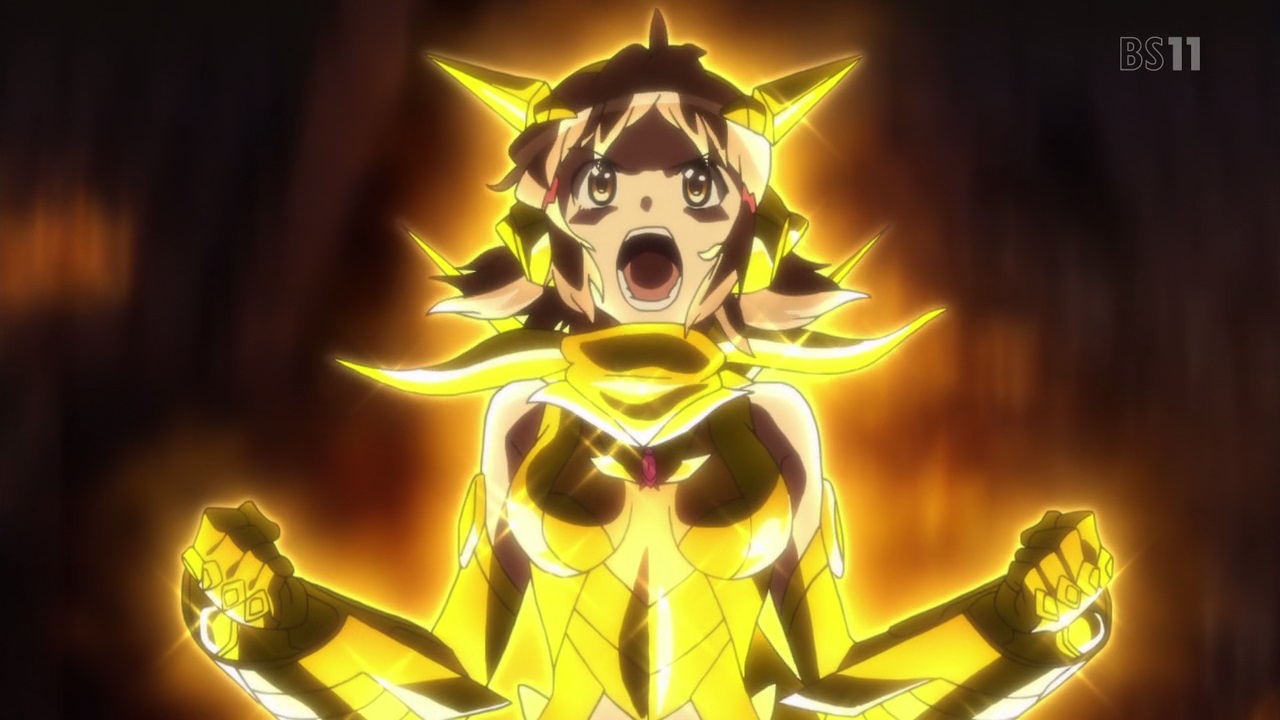 And what emerged from the Lodgemaster’s hand is Hibiki Tachibana’s ultimate form! Come to think of it, this Golden Gungnir Form might be a shout out to the Gold Clothes from Saint Seiya. 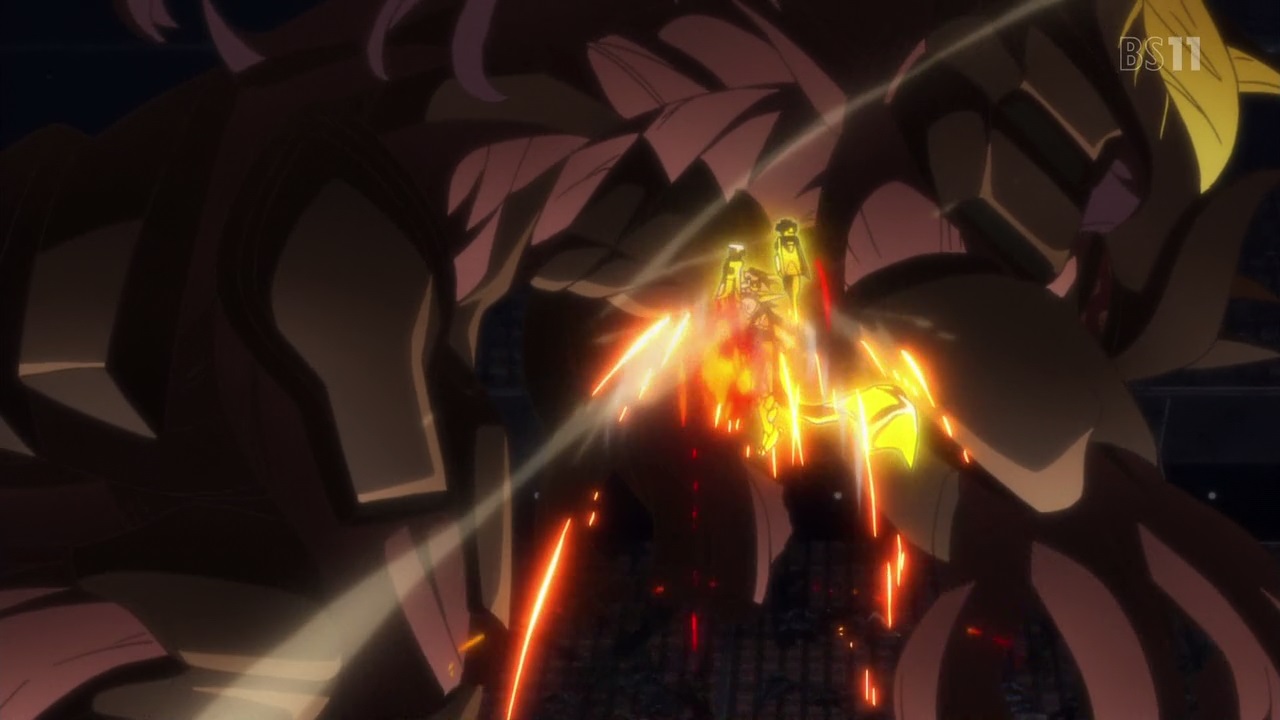 But anyways, time to finish Adam Weishaupt as Hibiki delivered a flurry of punches that launched the Lodgemaster into the sky. 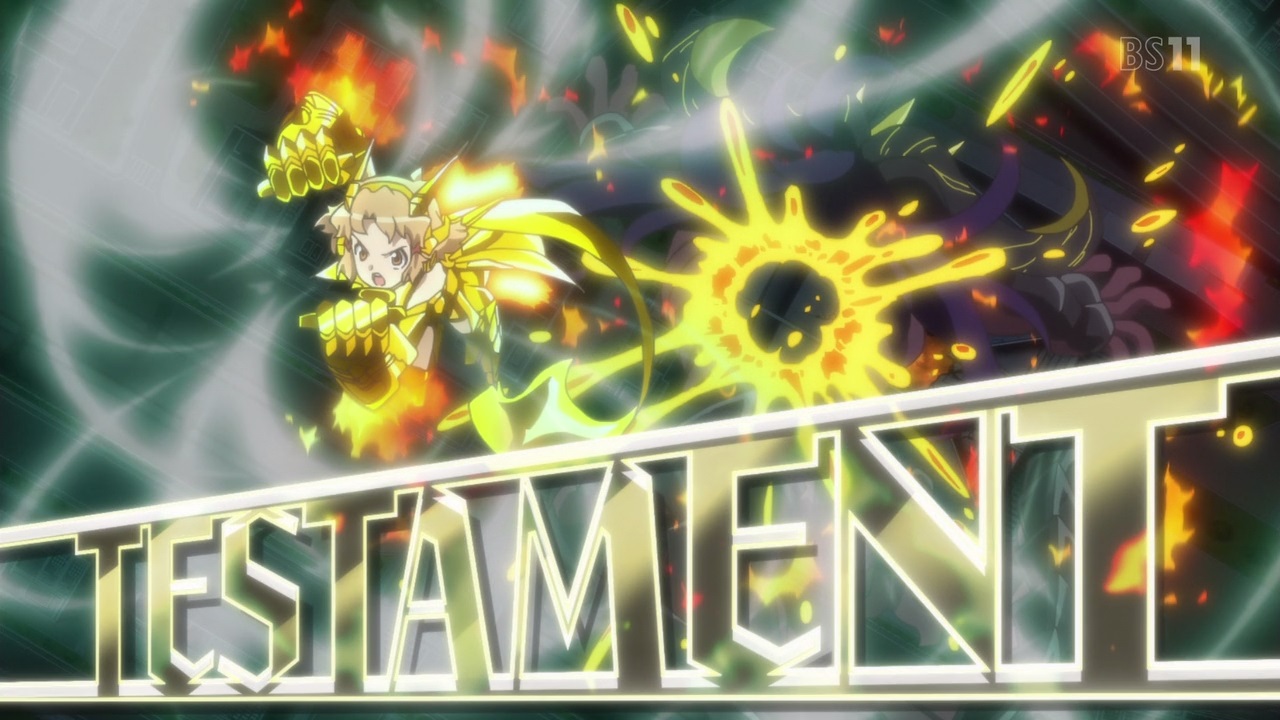 I like how Satelight and King Records kept those awesome things like using Nana Mizuki’s songs on this series! 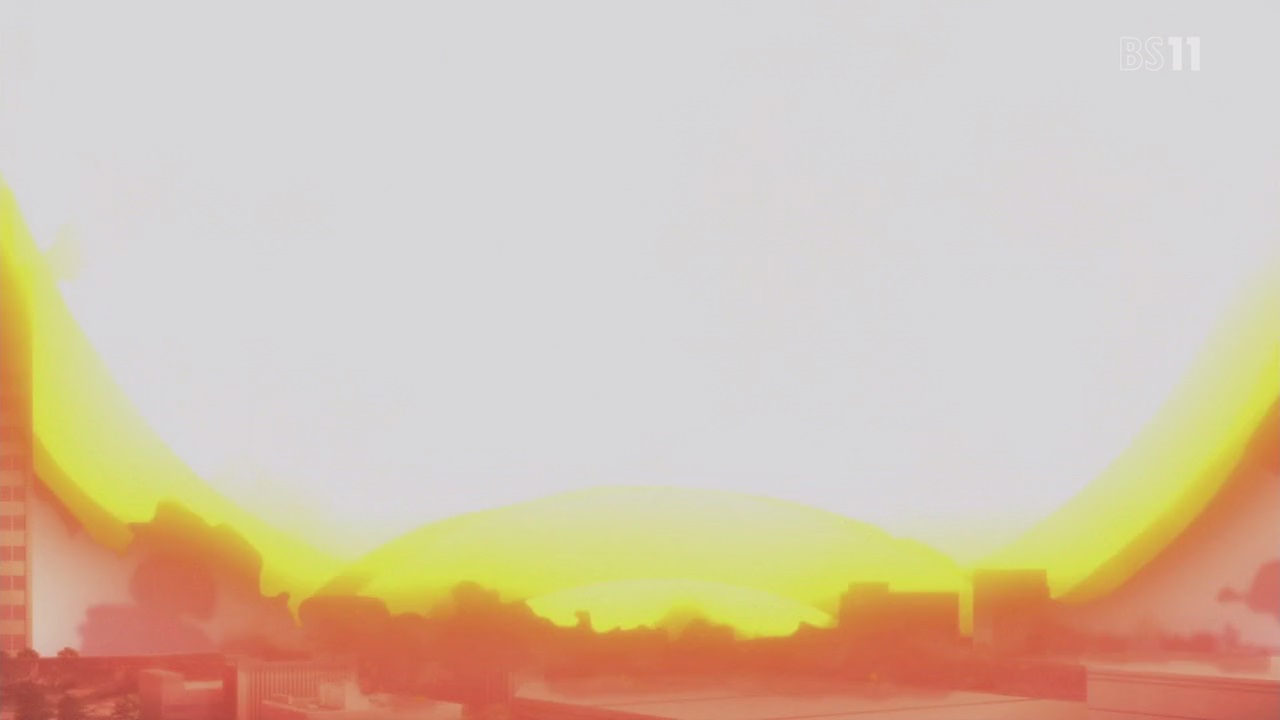 Well, that takes care of Adam Weishaupt as he explodes which engulfs the whole city of Saitama.

And while the Lodgemaster mocked them that humanity is still doomed, I think Hibiki and the rest of the Symphogear users will defy it at all costs! 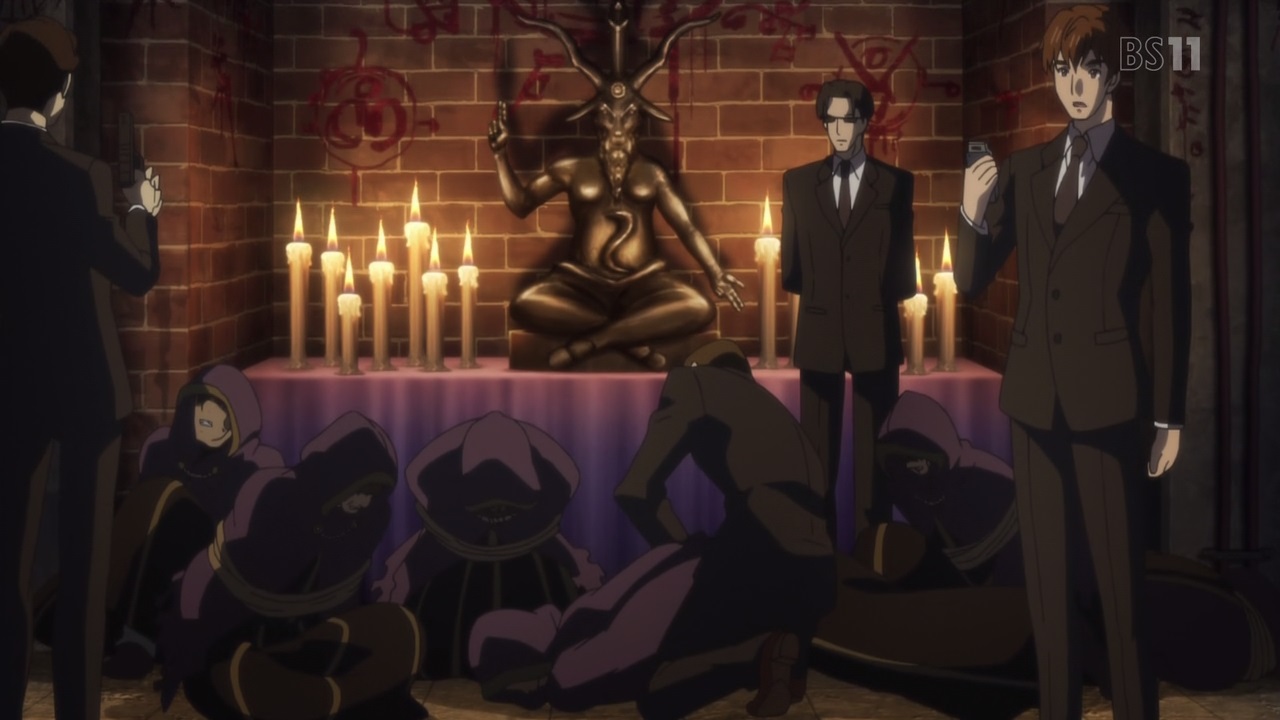 With Adam Weishaupt and the alchemists gone, the Bavarian Illuminati has fallen apart and Ogawa-san and his team have managed to arrest the remaining members.

Well, I have to say that the Bavarian Illuminati won’t be a threat anymore as they’re dismantled by SONG. Still, there’s a looming threat from the Custodians as Adam mentioned and it’ll be more dangerous than the Illuminati. 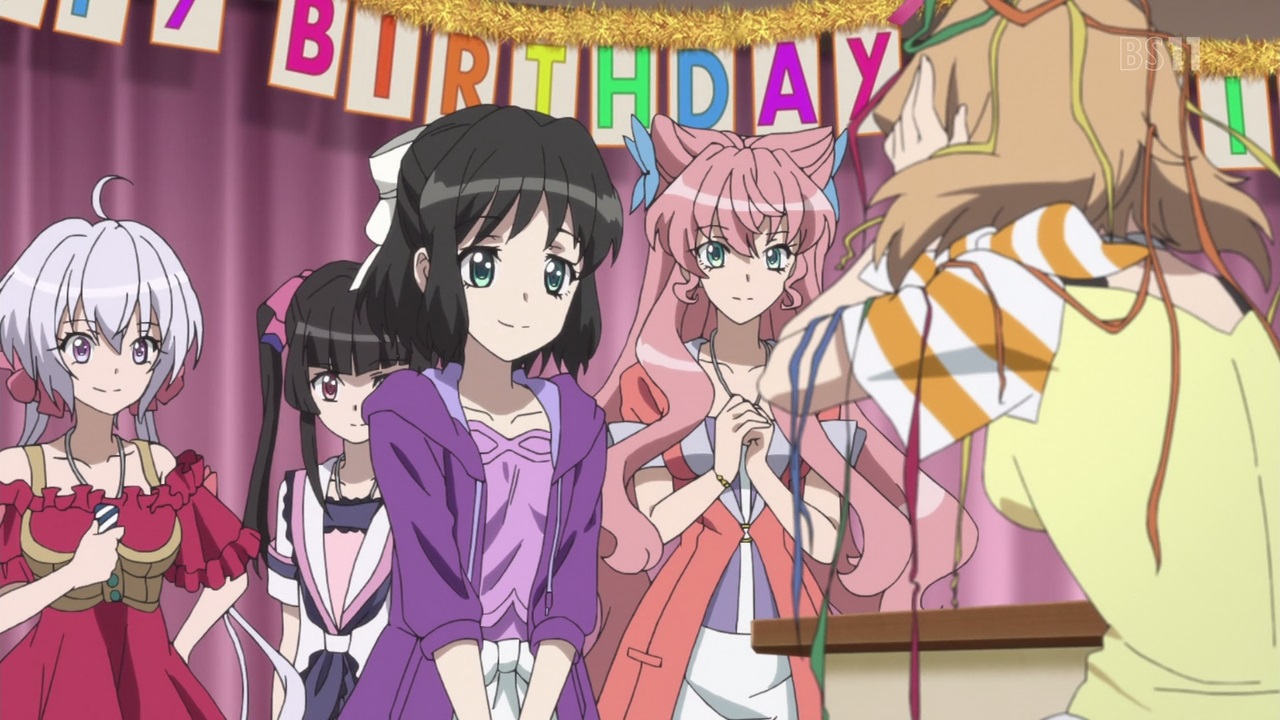 Sure that her birthday is already passed, but Miku Kohinata and the rest still wanted to throw a party for Hibiki. Happy birthday, Hibiki-chan! 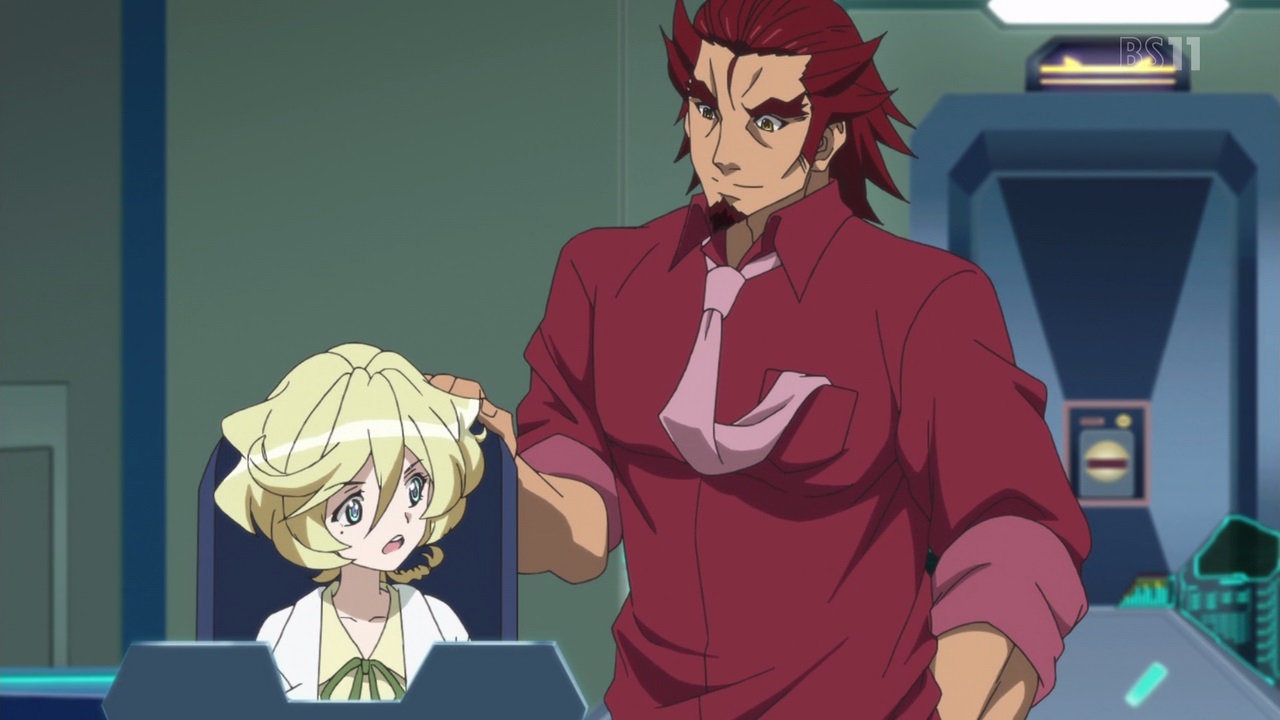 One last thing, seems that Elfnein has found some new discovery on why Hibiki Tachibana gained divine powers as she told Genjuro Kazanari about it. 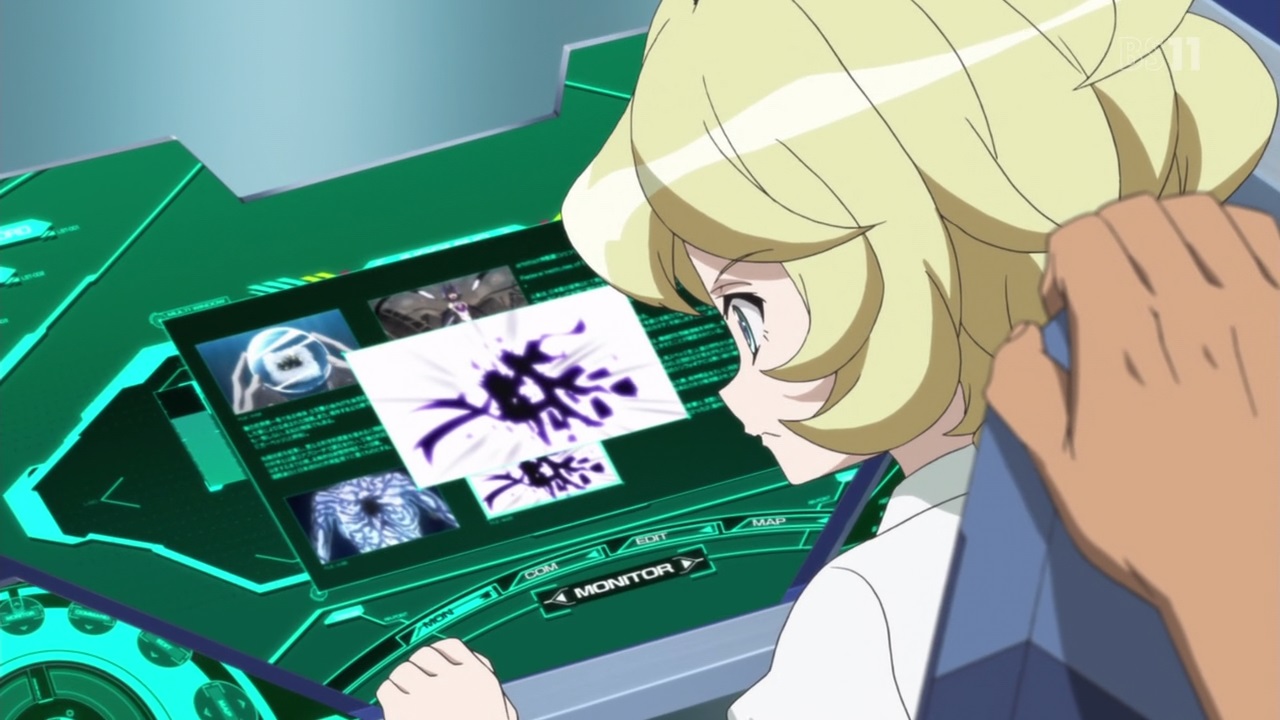 Turns out, remember the time when Hibiki got hit by a beam from Symphogear G Episode 10? Well, it appears that it’s actually more relevant now as the power from Shenshou Jing has not only destroyed the Gungnir crystals that encroached Hibiki’s heart, but purifies her body and soul which in turn receives divine powers.

Of course, let’s not forget that Miku Kohinata got hit too by one of Shenshou Jing’s beams, which also destroys the original sin from her body. Since she got caught by her own relic’s powers back in Symphogear G, I have a feeling that Miku will receive divine powers that would attract the next antagonist in Season 5! 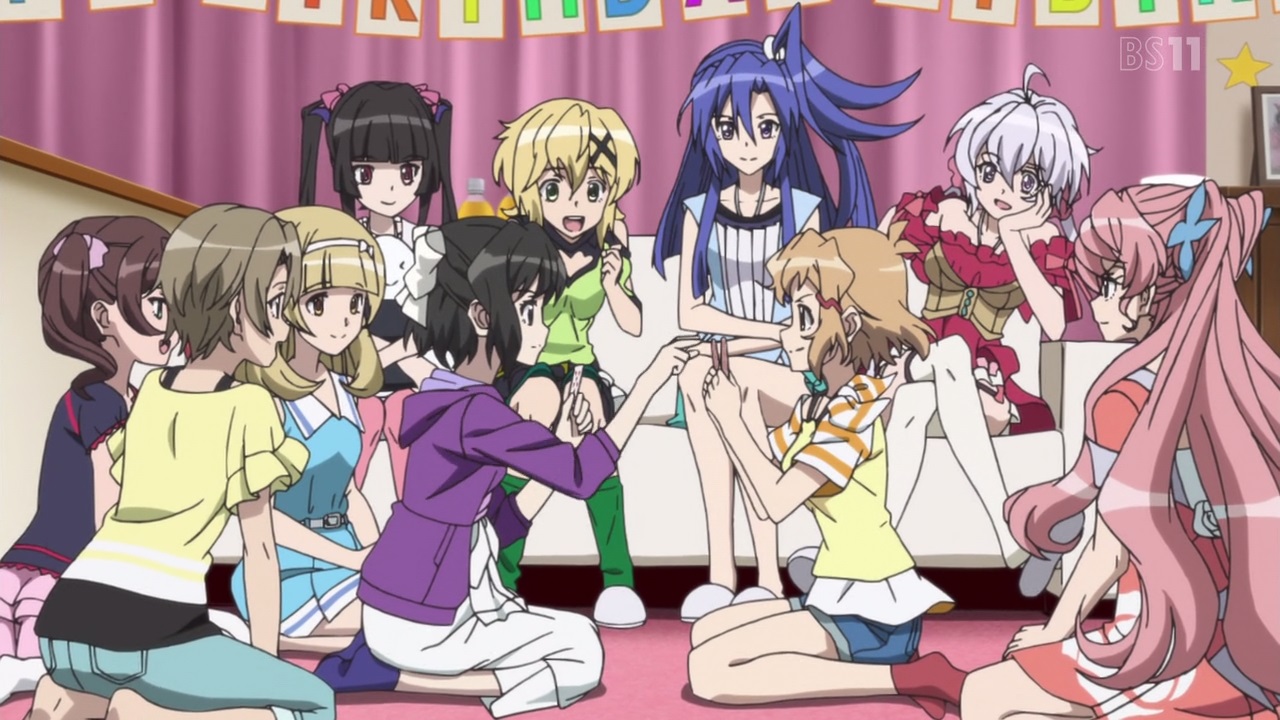 For now, it’s time to close this fourth season out as let’s sit back, relax, and enjoy the final moments of Hibiki Tachibana’s birthday with her dear friends!

All I can say is that Satelight has escalated the whole franchise into new heights with Symphogear AXZ. from its character development, the music, and event the fight scenes. It seems that Satelight has put more effort on this 4th Season. Then again, I wish that the likes of Cagliostro and Prelati should have a fleshed-out backstory compared to Saint-Germain. Maybe it’ll be used in other materials in the future.

In any case, I’m hoping that the 5th Season will top this one because Symphogear AXZ is the best season at the moment. Maybe after the Symphogear Live 2018 concert, the staff will reveal some details for Season 5!