Hey guys, let’s talk about an anime series that I’m looking forward to watch… since it’s already been aired. This is Wit Studio’s adaptation of a manga by Kore Yamazaki where it tells a story of a girl named Chise Hatori who’s being betrothed by a mage.

But we’ll take about Episode 1 in the later time as I’ll talk about the 3-part prequel to the TV series, specifically her childhood where Chise’s mother committed suicide and everyone wouldn’t want to take care of her.

Anyways, the reason why her relatives don’t want to take care of Chise is because they think that she’s crazy, but the truth is that Chise saw spirits both good and bad, mostly bad ones and it’s sucks that Chise Hatori is being ostracized by everybody due to her trait

With that said, Chise went to this strange building in the middle of the forest, hoping that she’ll run away from that hideous creature that’s been chasing her.

Inside, she met the librarian named Riichi Miura who took Chise in wholeheartedly because he knows her plight. In fact, Riichi is being called the magician in the forest.

In any case, Chise Hatori felt safe as she’s being taken care of by Miura, who gave her books to read to clear her depression.

Of course, all things must come to an end when tragedy was struck upon Riichi Miura as he’s being attacked by a monster while saving Chise Hatori from harm.

And while he’s being pinned down by this hideous mouse-like creature, Riichi-san told Chise to take his precious book and get out of the library as fast as she could.

Yeah, he doesn’t want Chise becoming a food for this monster. With that said, Riichi Miura has died while saving Chise Hatori. 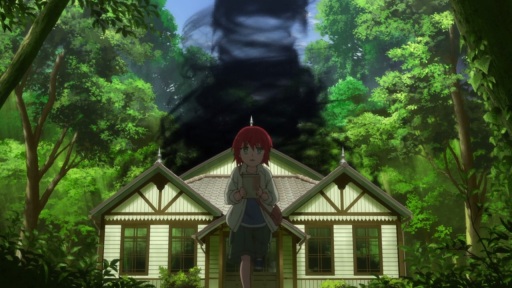 Anyways, she ran away from the forest as the library crumbles down. Of course, it’s not over yet as Riichi Miura wanted Chise to give his book to a special person named Mayumi Niikura as his last request.

And this is Mayumi Niikura as Riichi is in love with her, but Mayumi’s parents already arranged a suitable partner for their daughter. After all, Mayumi came from a rich family and Riichi Miura is out of luck.

Of course, it’s not like their relationship has ended however as Riichi made a promise to Mayumi that he’ll return her book once he’s finished reading it. However, it wasn’t the case for Riichi Miura as he got injured on his way to meet with Mayumi Niikura and end up staying at that library for many years. Yeah, such a sad life for Miura. 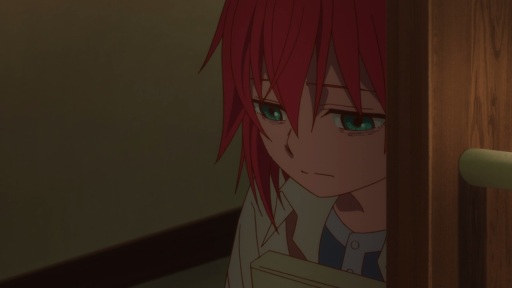 Now, it’s up to Chise on returning the book to its rightful owner as she goes to the hospital…

…to see an elderly Mayumi Niikura. Sure that she has little time in this world, but Mayumi-san still believes that Riichi will return the book to her.

Of course, Chise-chan will do it in his stead as Riichi already died at the forest. 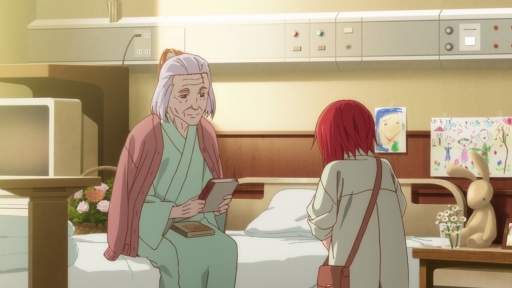 In any case, she fulfilled her duty where Riichi couldn’t do it in his time.

And as for Mayumi-san, she’s happy that her book is in her hand and she remembered those times spent with Riichi Miura.

Of course, Mayumi Niikura wanted to thank Chise Hatori for giving the book back to her.

All I can say is that Mayumi-san is very kind towards Chise-chan, which she cried that there are a few people who genuinely cared for her. 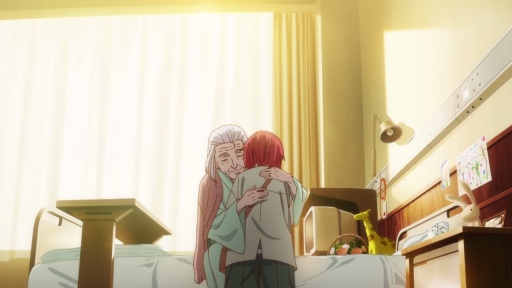 And that’s about it for Episode 0 and I’d say that it’s a good prequel to the eventual TV series that’s being aired right now.

So while there’s a happy ending to this backstory, Chise Hatori will have many challenges that she’ll face while growing up into a fine young lady. Then again, I’m worried that Chise’s partner might be very cruel. But we’ll find that out on the premiere episode!