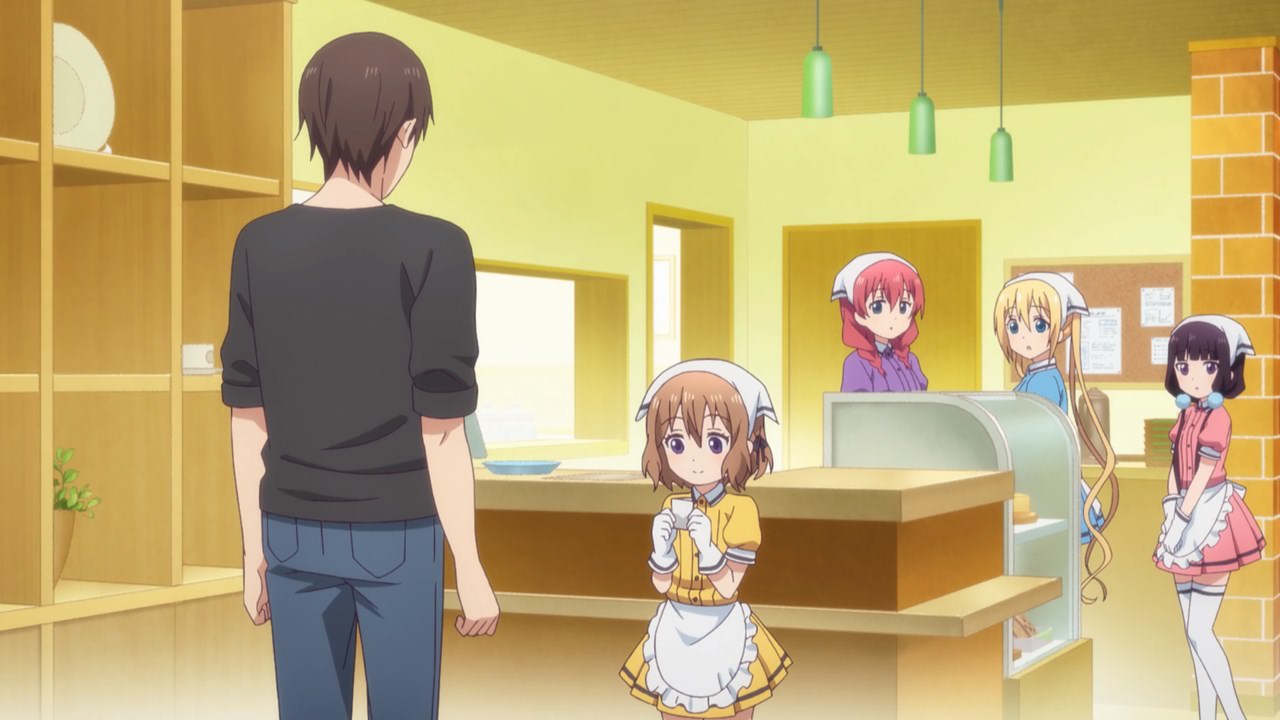 Look what we have here, seems that Mafuyu Hoshikawa is being confessed by a tall guy by giving Mafuyu his account for a generic talk app, mostly LINE because that’s the most popular talk app in Japan. 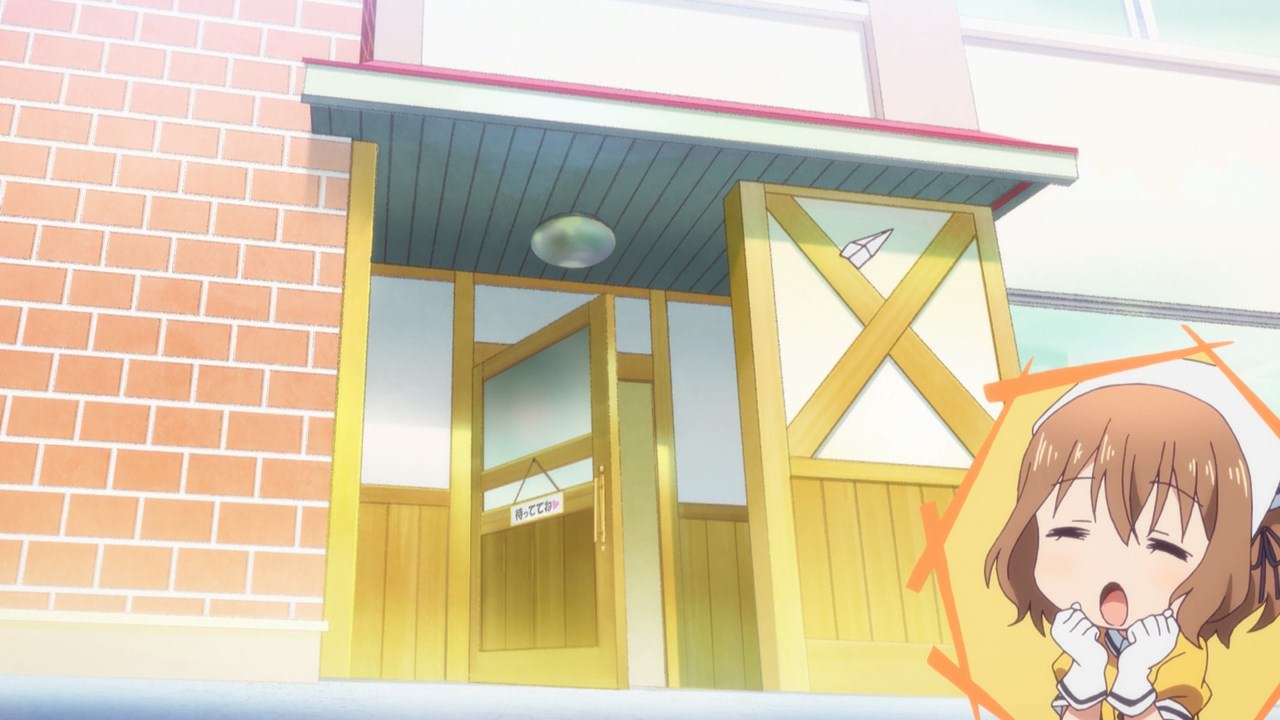 Then again, Hoshikawa doesn’t like having a tall boyfriend because at Café Stile, she’s a little sister maid waitress first and loli-sized snarky college student second.

Well, that’s sucks for this guy because his proposal paper got thrown away like an airplane. But you know what, I feel that Mafuyu will be forever single if she continues to dump dozens of worthy suitors. Then again, she has standards so that’s something! 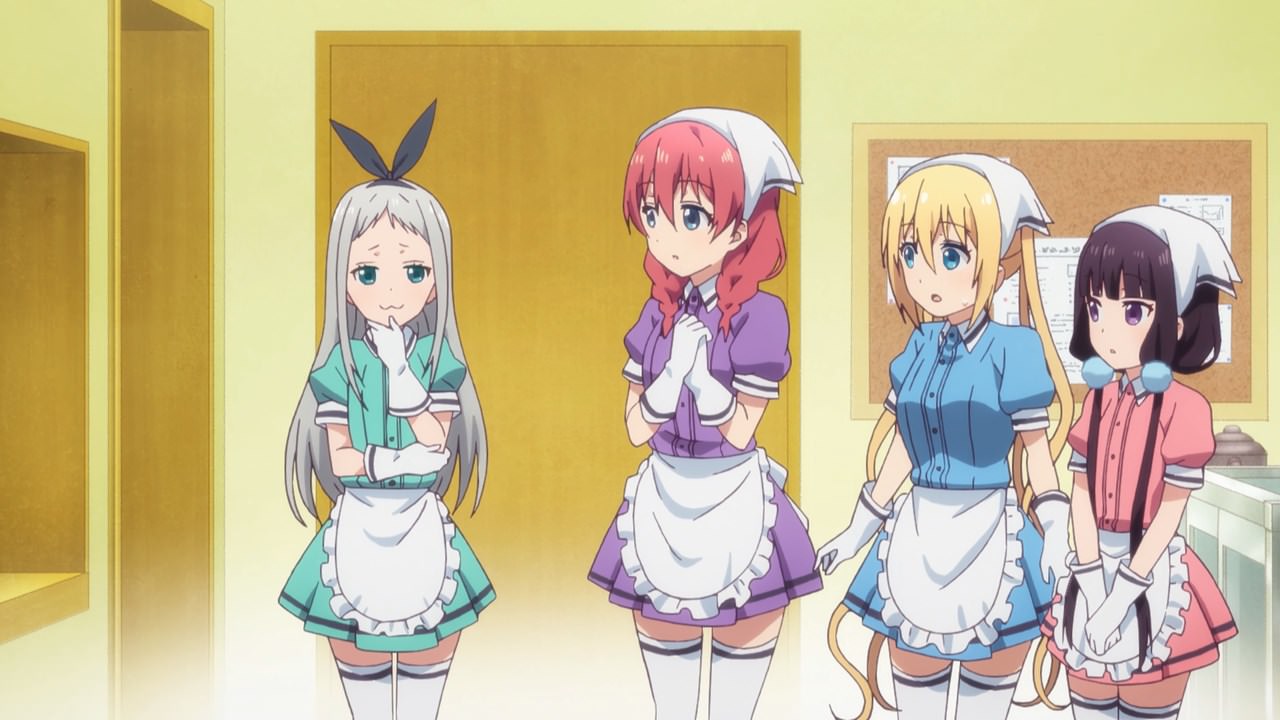 On the other hand, here’s Hideri Kanzaki as s/he’s commenting about Mafuyu’s stature getting some attention to dozens of lolicons. C’mon, they can legally- Wait, I don’t think it’ll work. 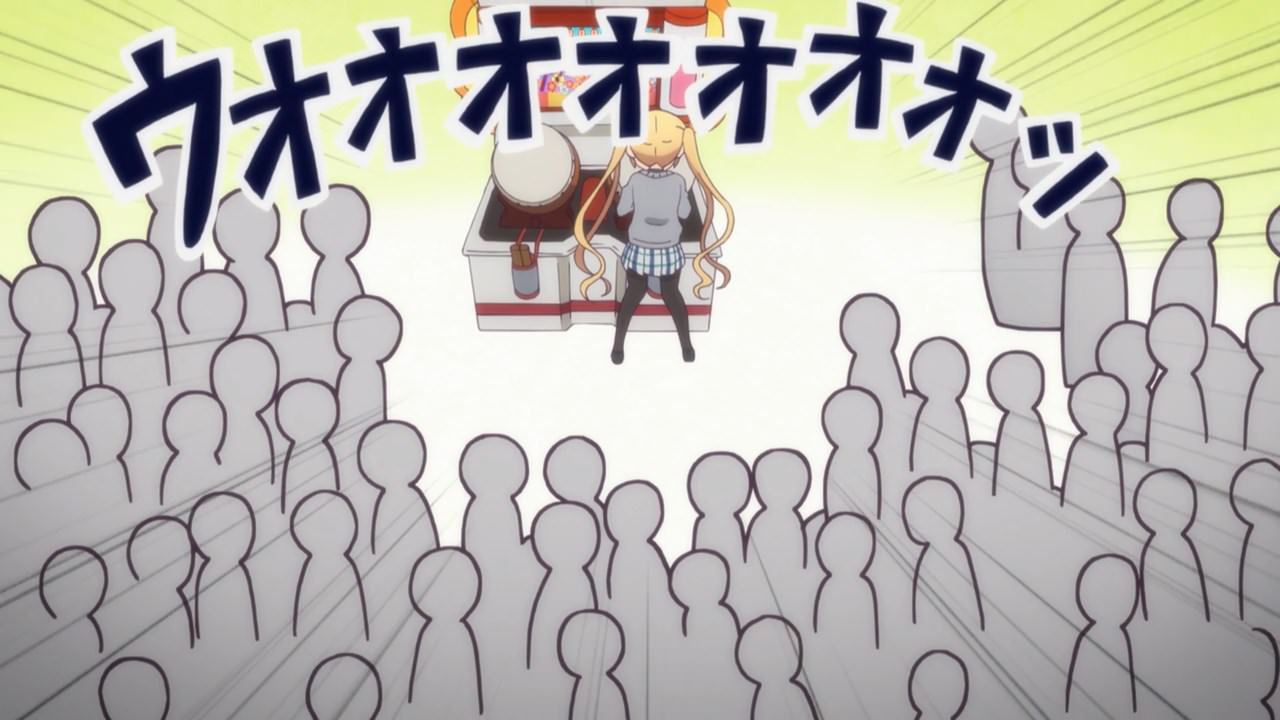 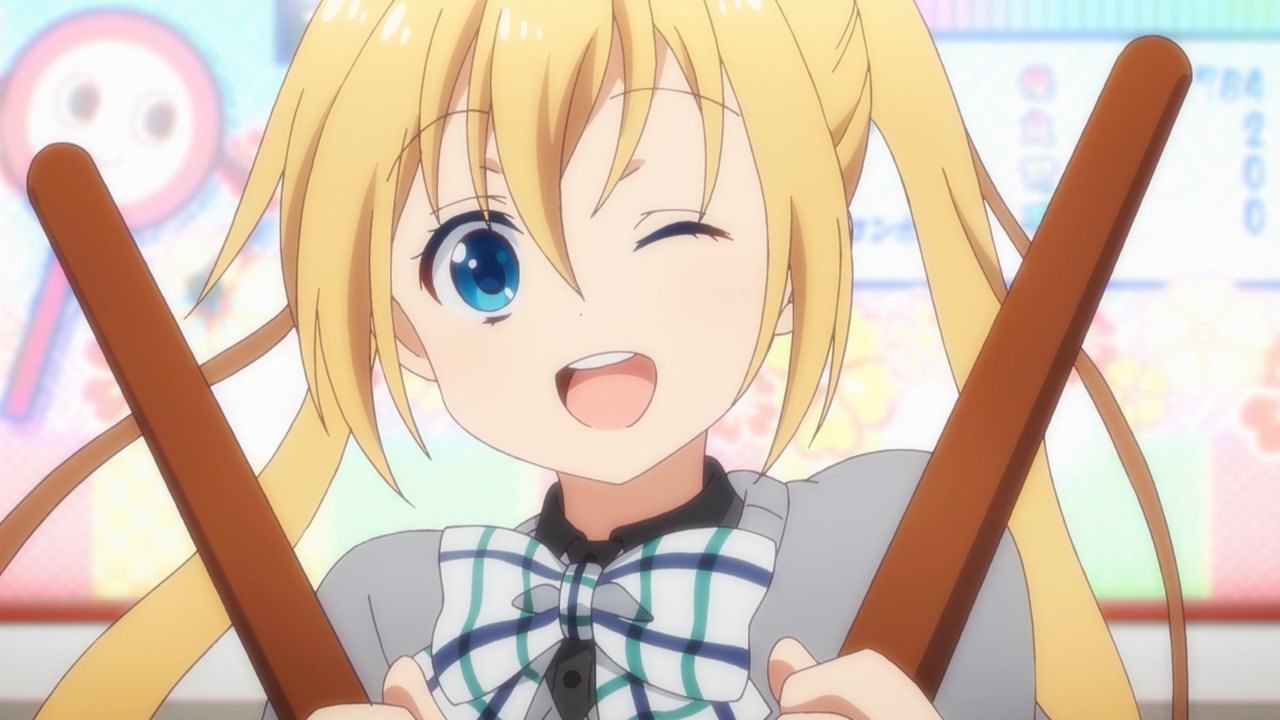 Meanwhile, here’s Kaho Hinata as she’s playing at the arcades again. After all, it’s her usual things that Kaho do after school and everyone is excited to see her bouncing ti- I mean her big smile! 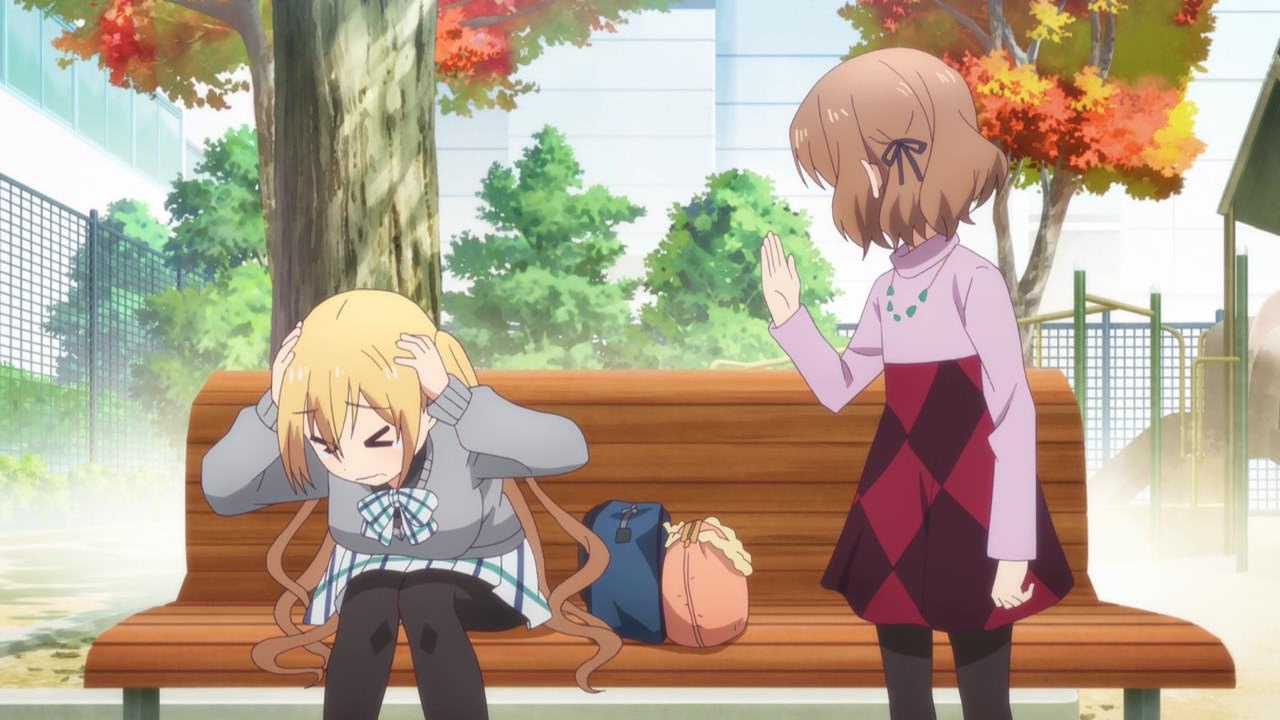 Unfortunately, Mafuyu is not amused as she learned that Kaho Hinata flunked the mid-terms exam and she must do the makeup exam. If she fails the makeup exam, Kaho’s mother will ban her from playing video games. 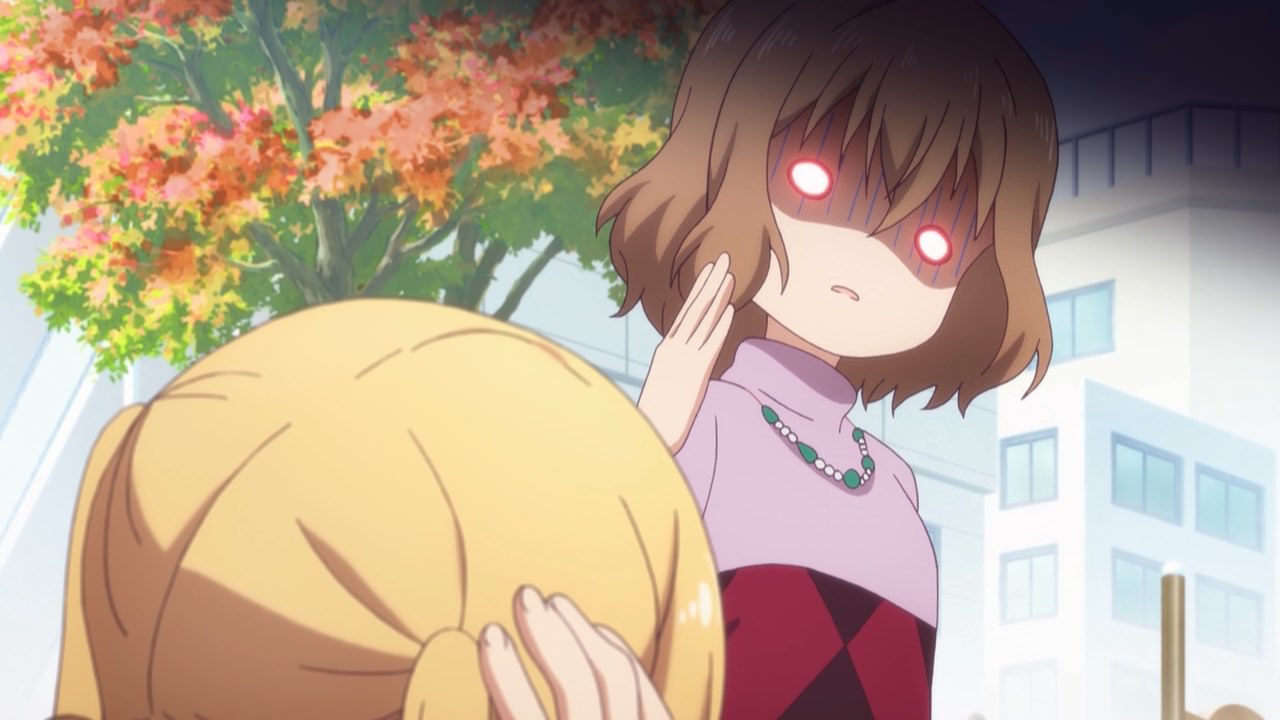 So, it’s up to Mafuyu Hoshikawa to tutor Kaho-chan until she passed the exam. And believe me, she’s fuming with anger right now upon seeing her co-worker flunking. 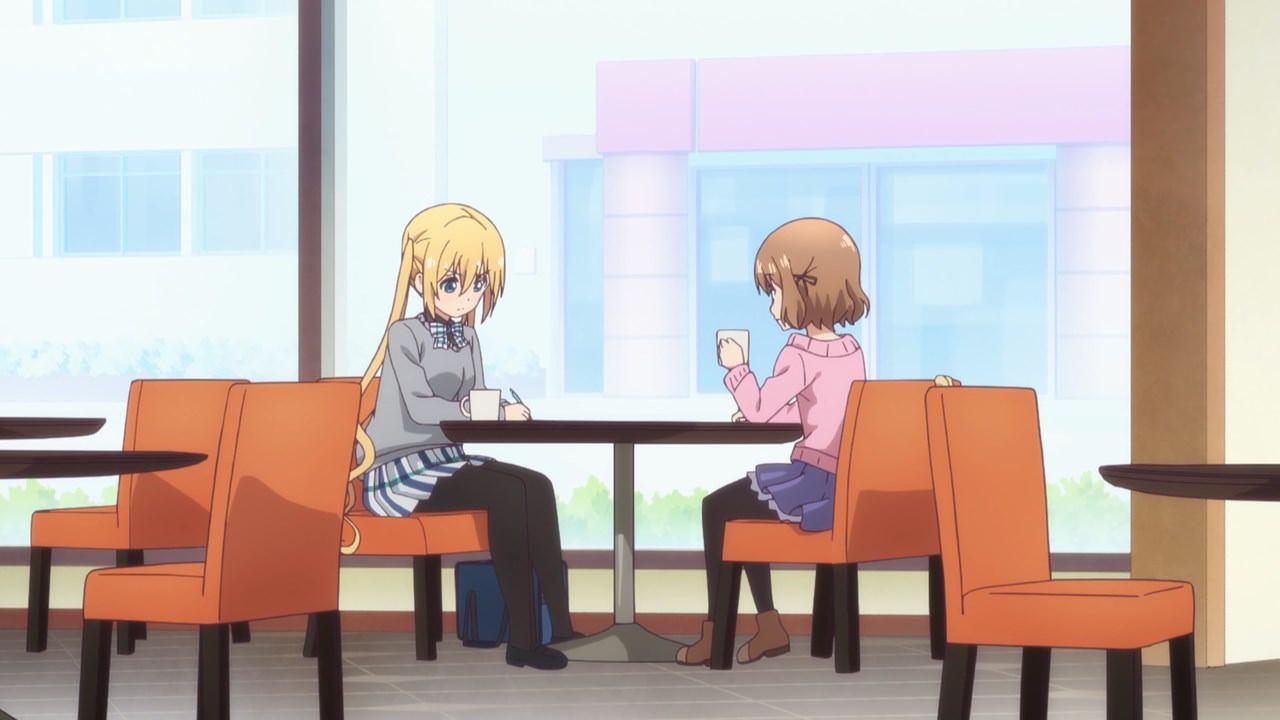 In any case, Kaho is studying with Mafuyu-san everyday at the cafe after school/work, although Mafuyu is very strict that Kaho-chan is getting smacked in the head for making mistakes.

On the other hand, it appears that Mafuyu Hoshikawa is aiming to become a kindergarten or elementary school teacher someday. Then again, her short stature might think that she’s part of the children instead of being part of the faculty staff. But anyways, looks like Kaho Hinata is improving her studies, mostly with mathematics because she’s not good at numbers. 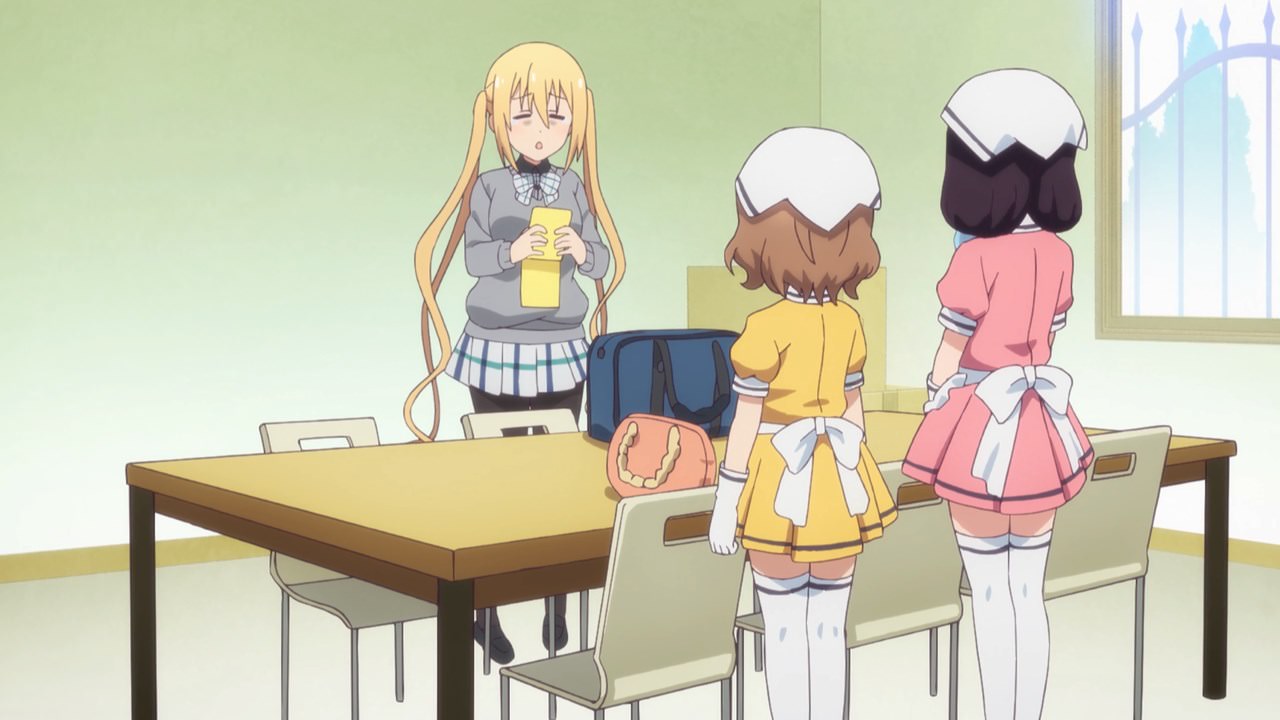 Unfortunately, Kaho’s rigorous studying has gave her some eye bags. Yeah, she can’t show her face at Café Stile! 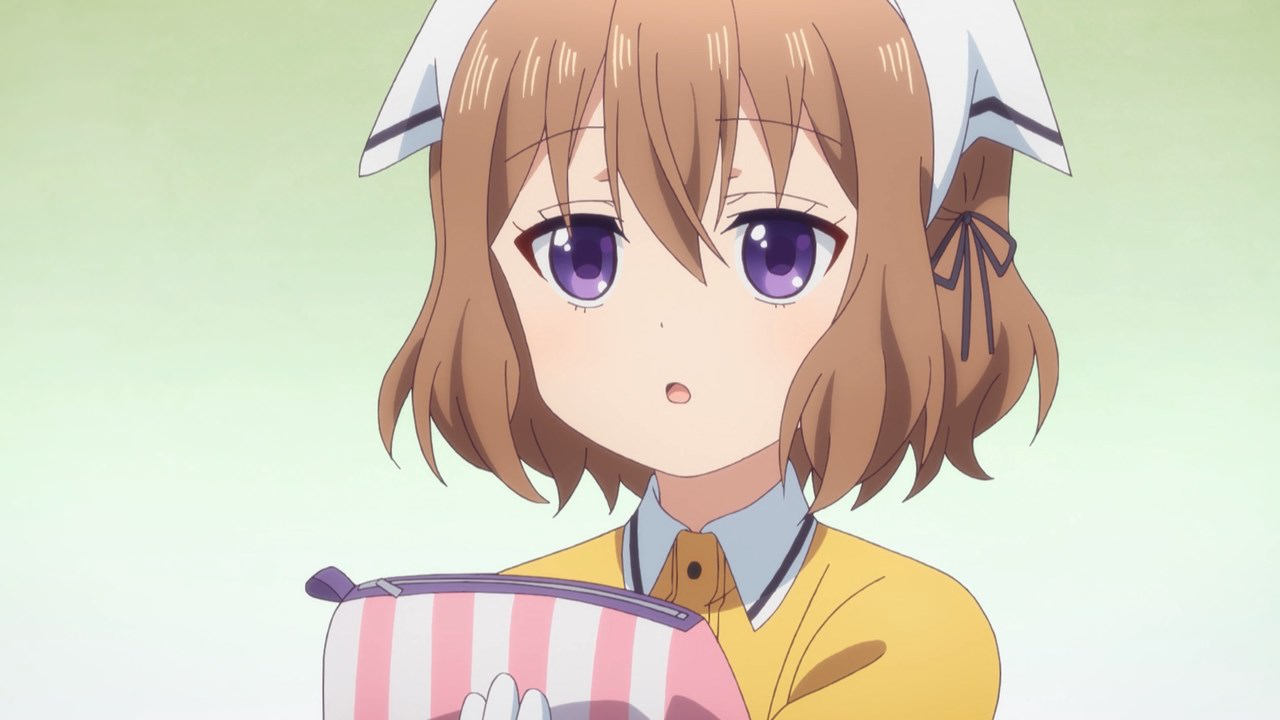 So, Mafuyu comes to the rescue as she brought her makeup to hide the eyebags from Kaho’s face. Well, I have to say that Mafuyu Hoshikawa is acting like a real big sister despite being called the little sister of Café Stile. 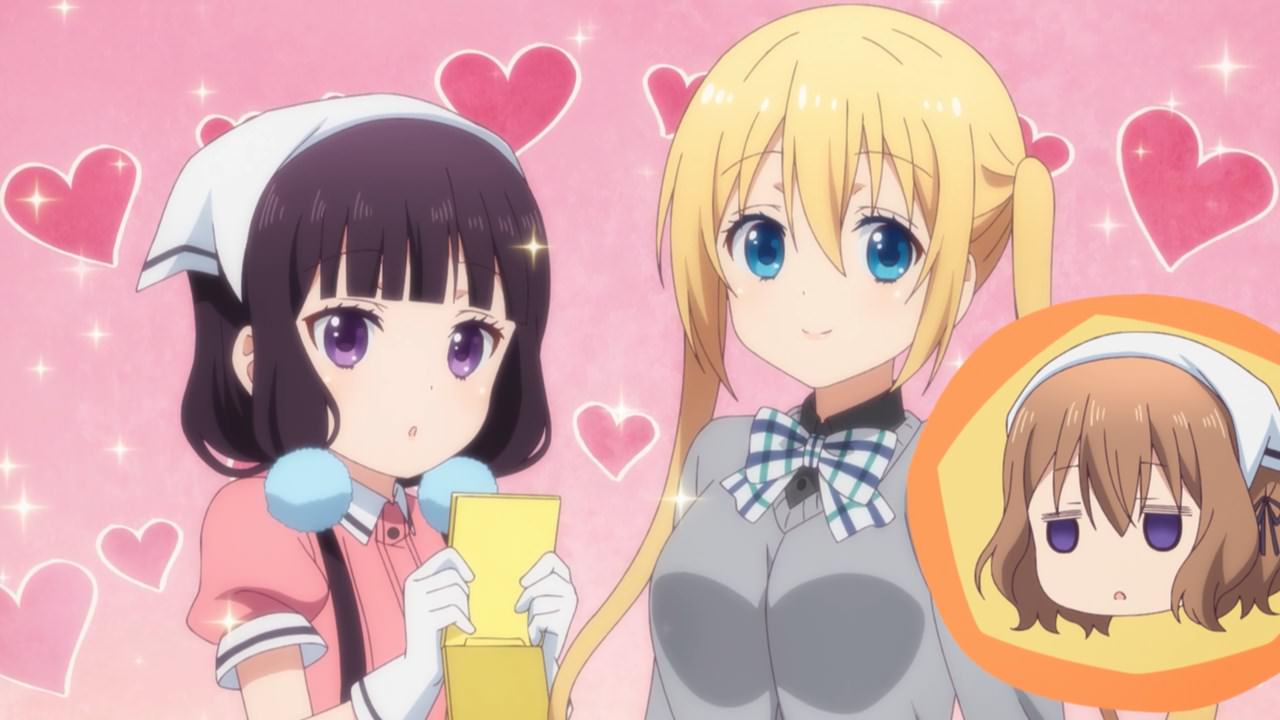 Anyways, looks like Mafuyu-san touched Kaho’s face up to look more gorgeous in front of the customers. Also, seems that Maika Sakuranomiya got a makeover too from Hoshikawa! 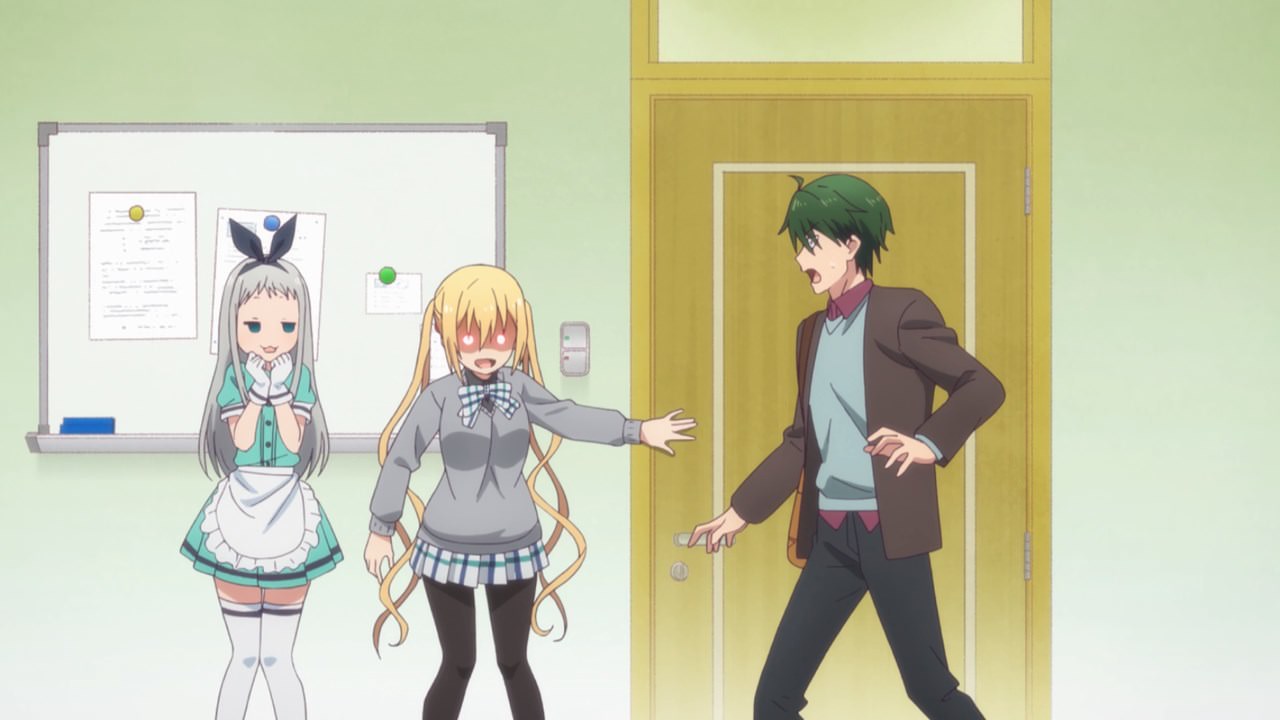 But speaking of makeovers, Kouyou Akizuki will get one from Mafuyu-san as he’s being dragged to have his face getting a little bit of touch-up. 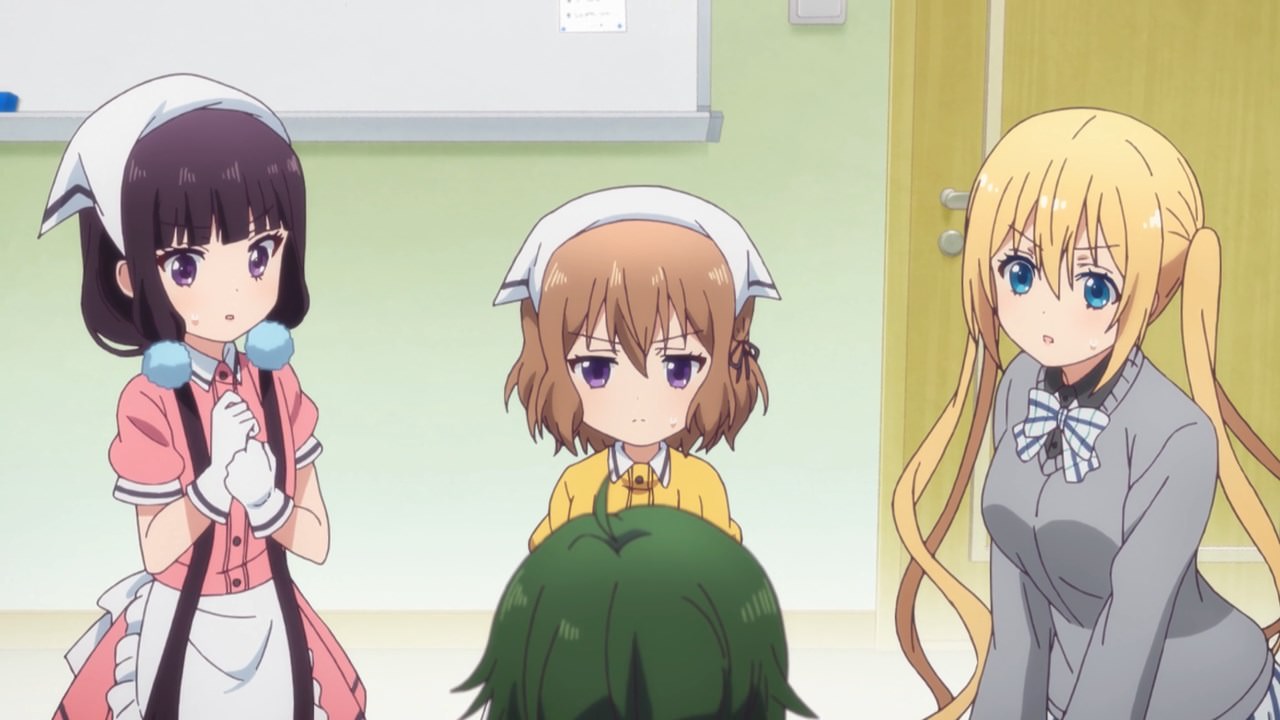 And once Hoshikawa did a force makeover on Akizuki’s face, they couldn’t believe to what they really saw… 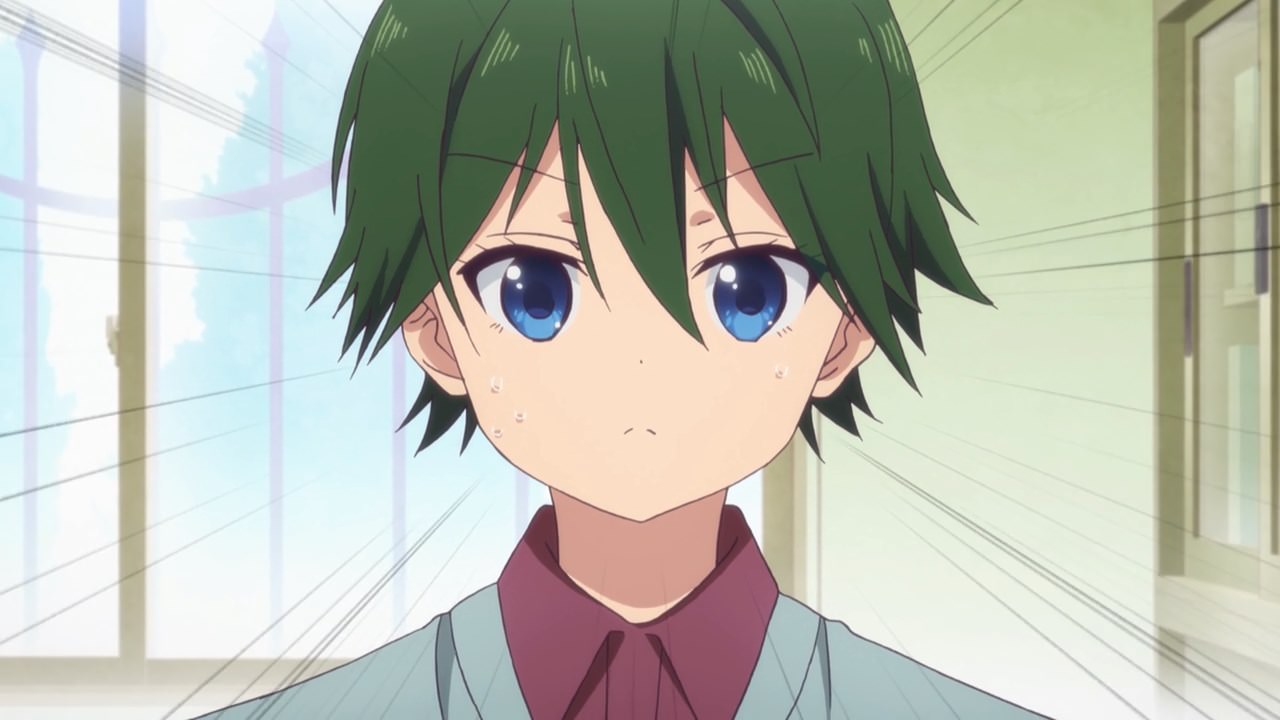 Turns out, Kouyou Akizuki got a shota face that’ll make the girls trying to hug him. Then again, Akizuki doesn’t have the short stature as Hoshikawa so having that face is weird. 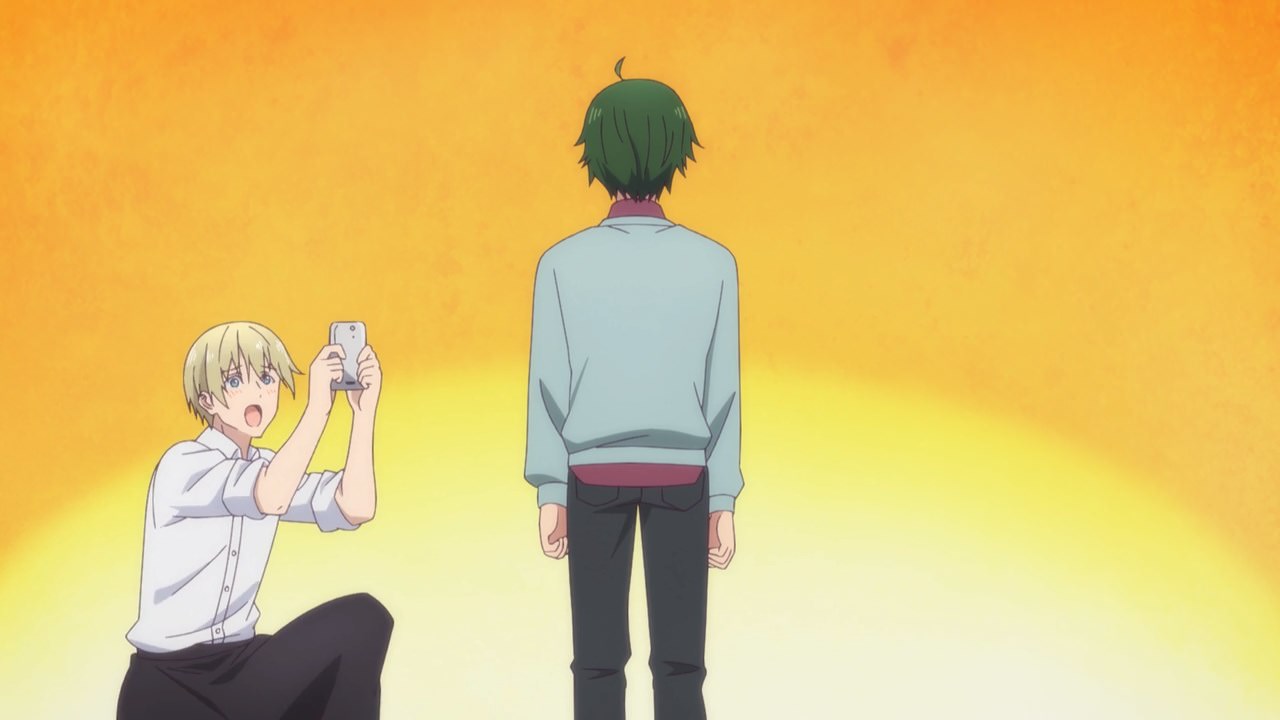 But that doesn’t stop Dino on taking pictures before Kouyou smacked him in the head! I wonder if Akizuki deleted the photos though?

In any case, Kaho Hinata has passed the makeup exam thanks to Mafuyu Hoshikawa’s tutoring from hell. Now that she passed the exam, looks like Kaho-chan can play video games… unless she got another failing mark. Still, it was fun for her hanging out with Hoshikawa so Hinata is looking forward to have a chat with her co-worker during their day-off.

Anyways, I’ll see you next time and man, we’re getting closer to the ending huh?