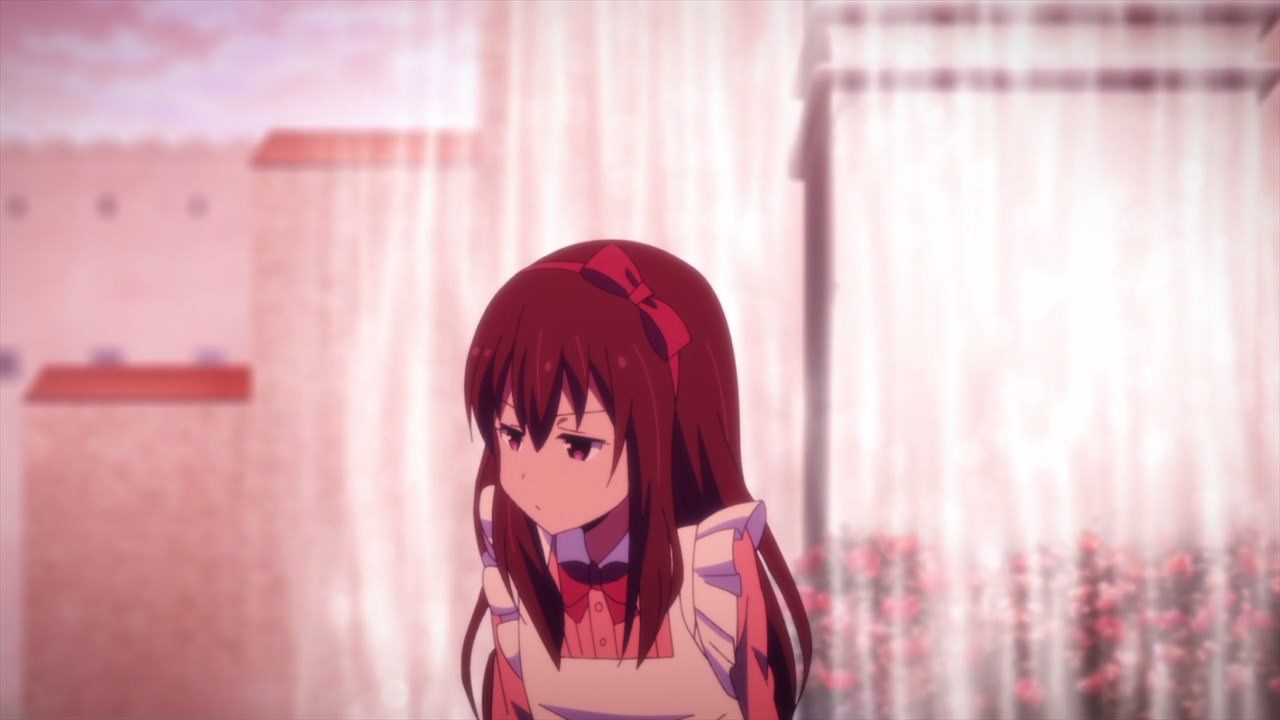 Hey everyone, let’s talk about this penultimate episode where we talk about a girl whose name derived from a flower.

However, this girl is being teased by her fellow kids because of how her silly name is. 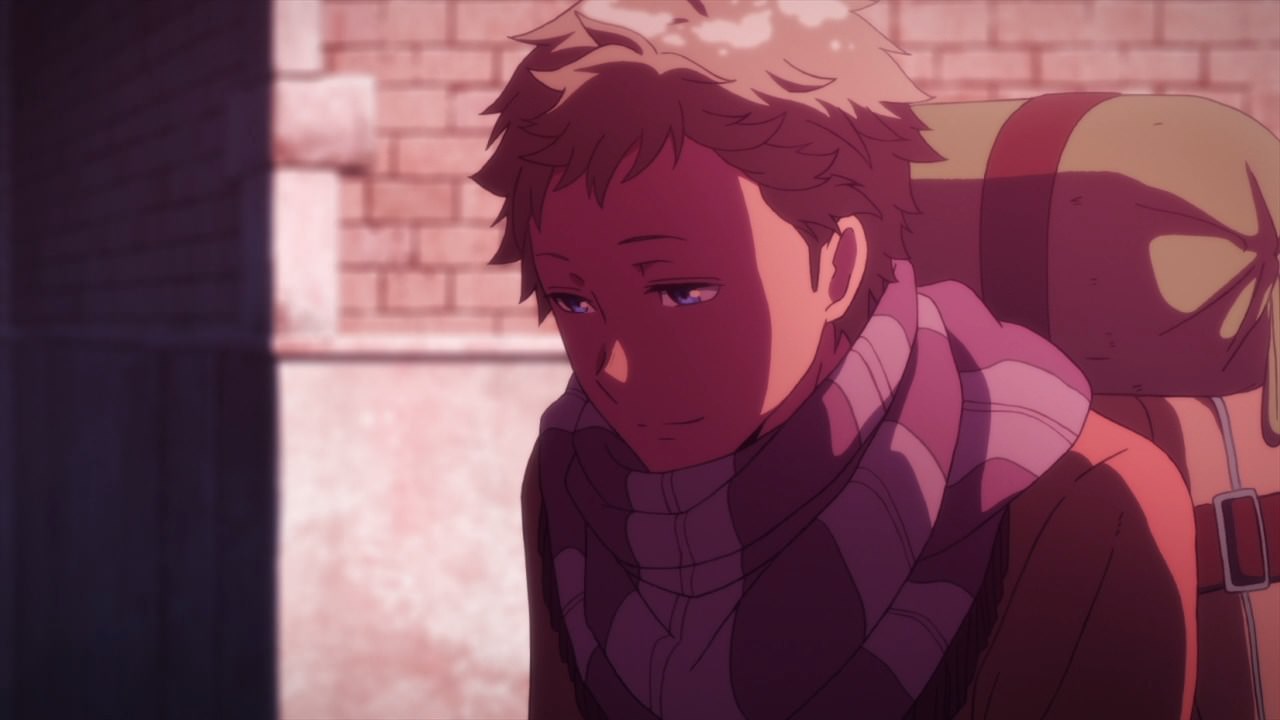 Until she met a traveler named Kino where this girl changed her life forever in the country of adults.

Anyways, this episode is kinda special because it shows the origins of this show’s protagonist. Also, this story was once adapted from the 2003 series so you might be familiar with this episode. 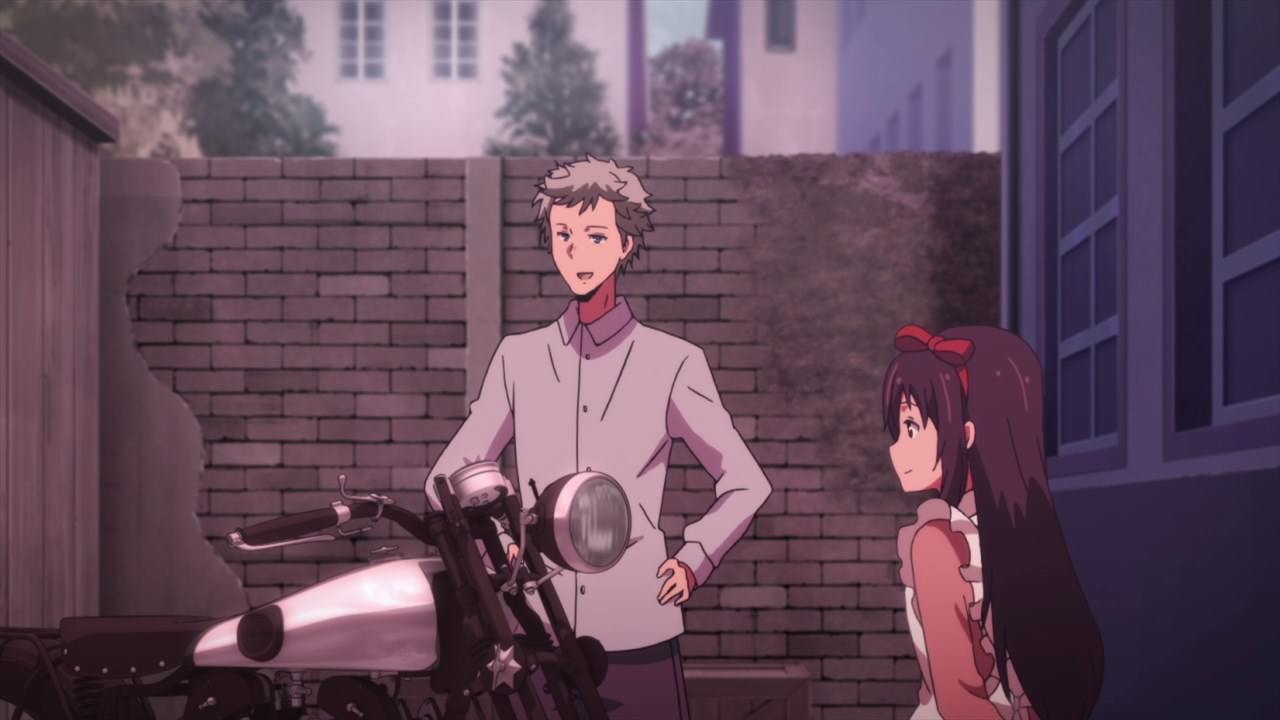 Now then, the girl is spending her time with Kino as he’s fixing a broken Motorrad. In fact, this girl didn’t spend some time with her parents as they ignore her until she becomes an adult. To give you a background, children who have reached 12 years old must undergo a surgery in order to become adults. Once they become adults, they can no longer complain when working on their designated job. Basically, they’re slaves to one specific task throughout their lives until they pass it to the next generation.

Of course, it seems that the time spent with Kino has changed the girl’s outlook on her life, as she learns that there’s more things that she could do like singing and potentially travelling around countries. Nevertheless, looks like she might not take the surgery after all. 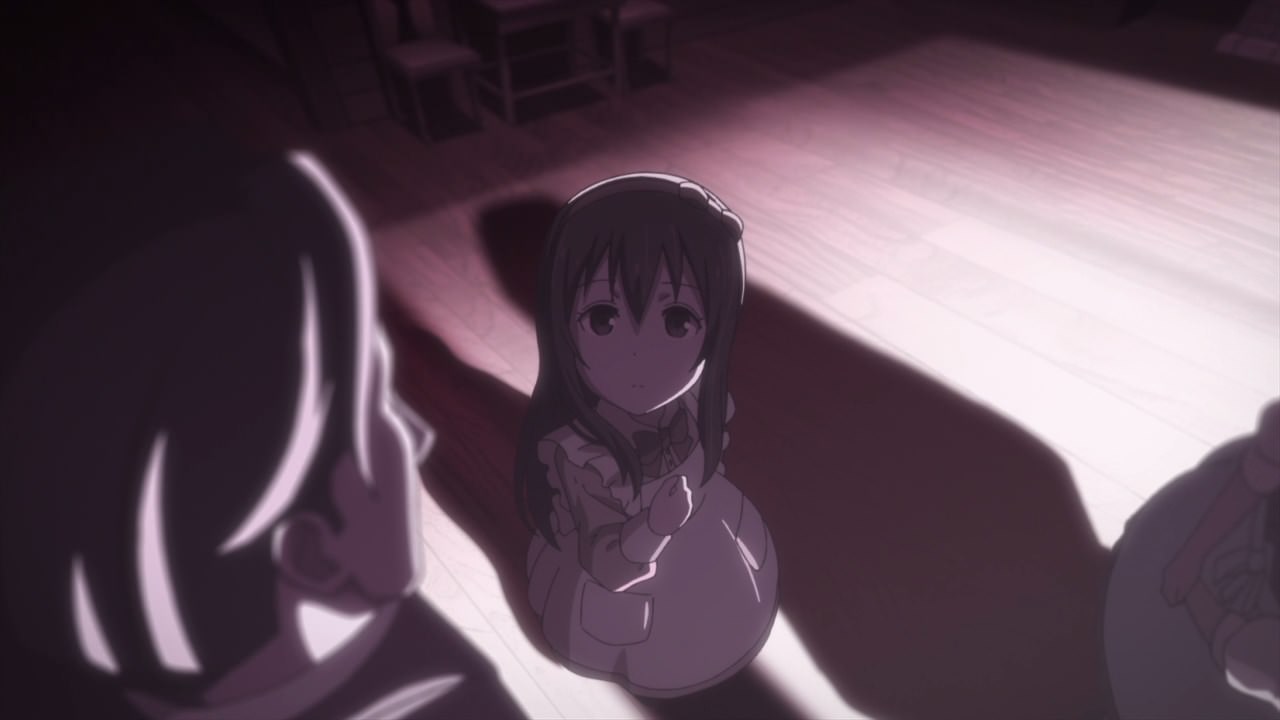 So when the girl told her parents that she won’t take the surgery for tomorrow, their parents are very shocked to see their daughter not becoming a proper adult. 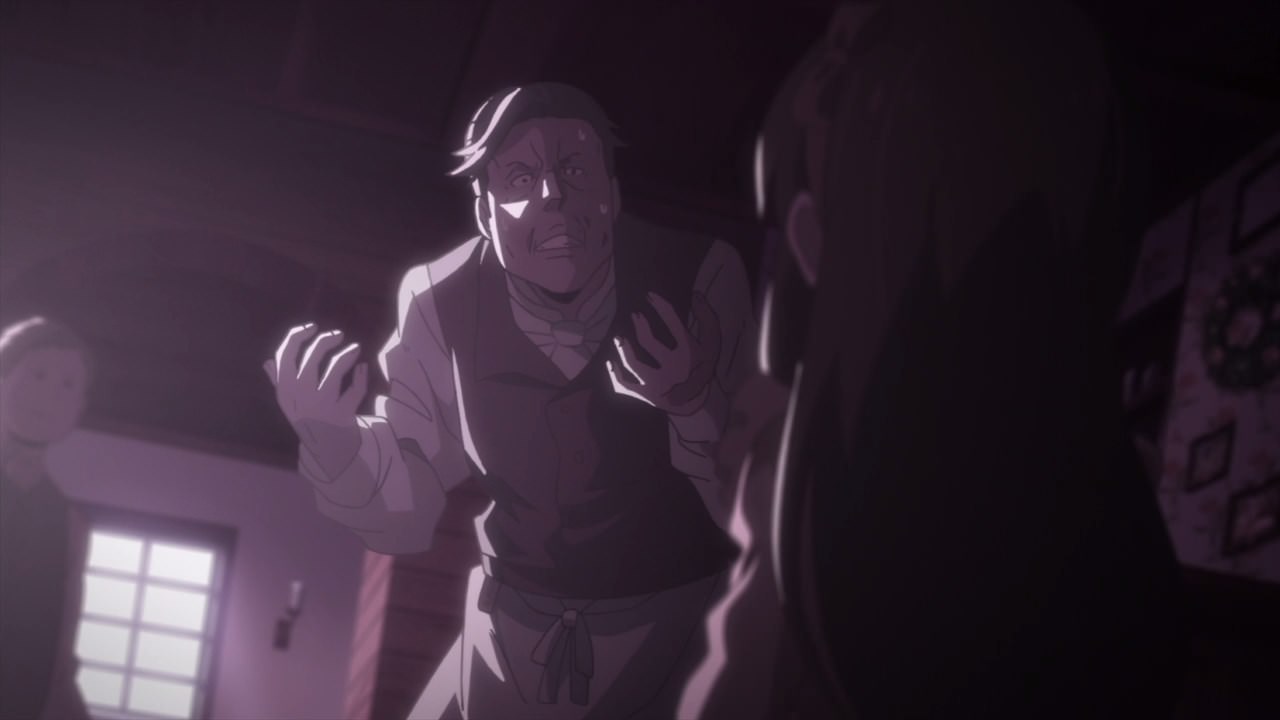 Heck, her father told her to take those words back and take the operation. Of course, the girl refused to take her words back so her father turned his attention to Kino where he told the traveler to leave the country. 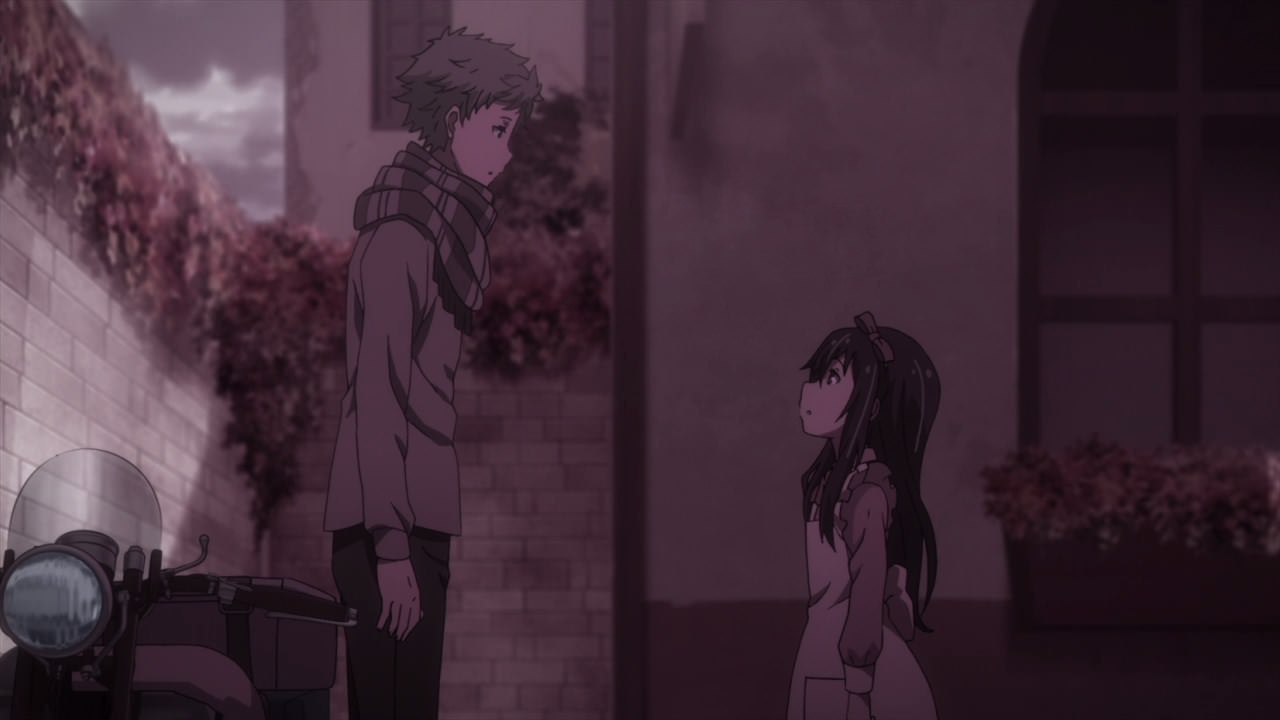 And so, Kino says goodbye to the girl as he’ll depart to another country as he can only stay at the country of adults for 3 days. In any case, the traveler will take his leave. 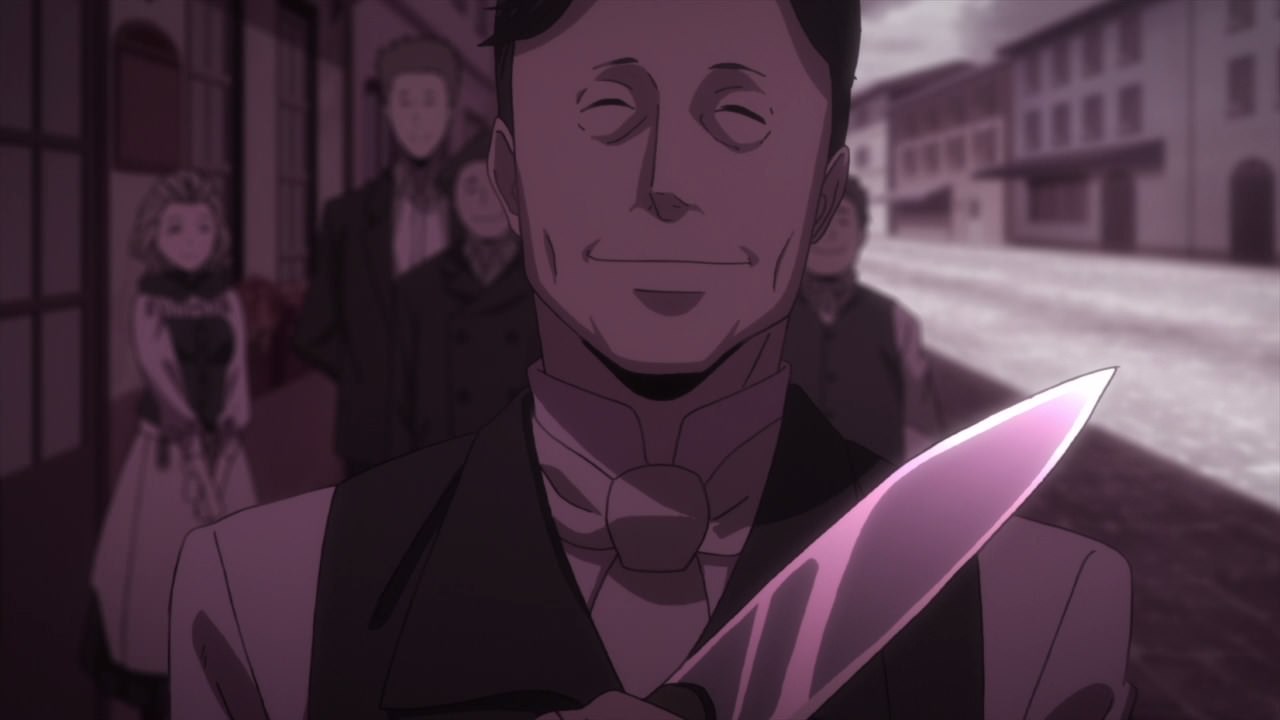 But not before her father took a knife with a smile on his face. It appears that there’s another rule where children who couldn’t take the surgery are labeled as defectives and they’ll be disposed by their parents.

Yeah, this is pretty disturbing in the land of the adults and Kino couldn’t let the girl getting stabbed to death. 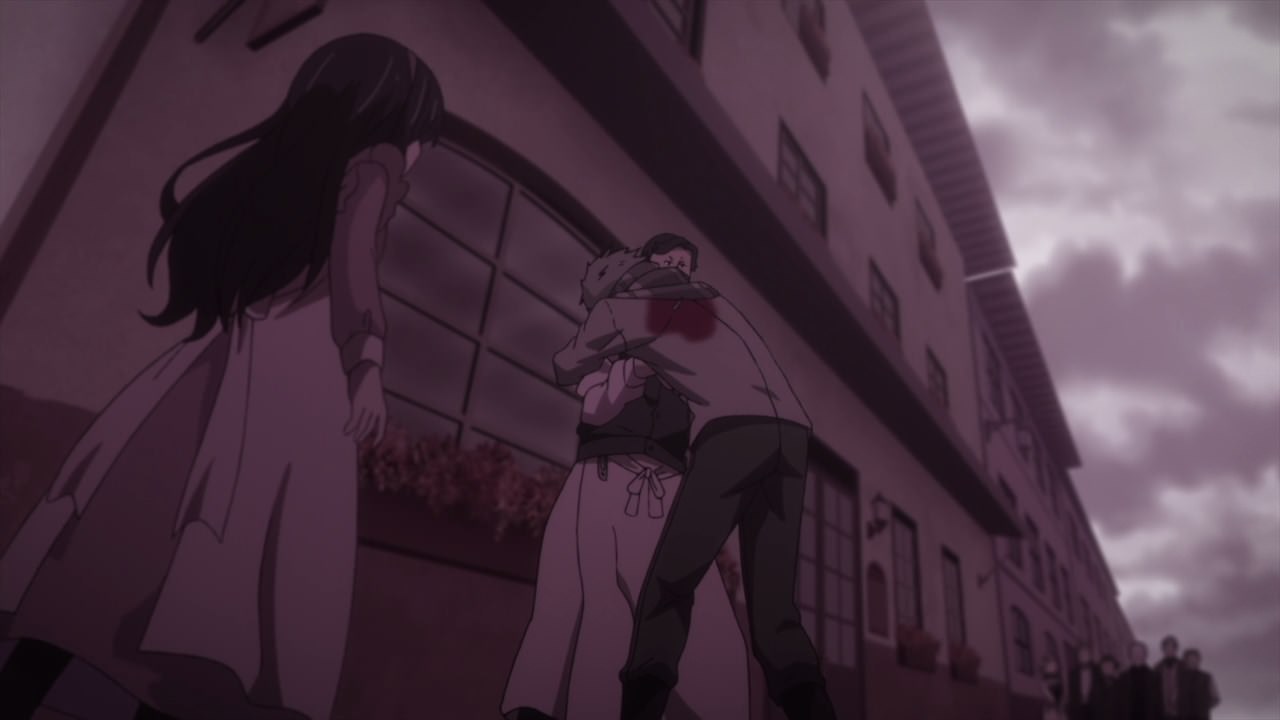 So, he decides to stepped in and tried to stop this man from killing his daughter. Unfortunately, Kino died on the spot but it seems that this man is not horrified as it wasn’t his fault on killing the traveler. 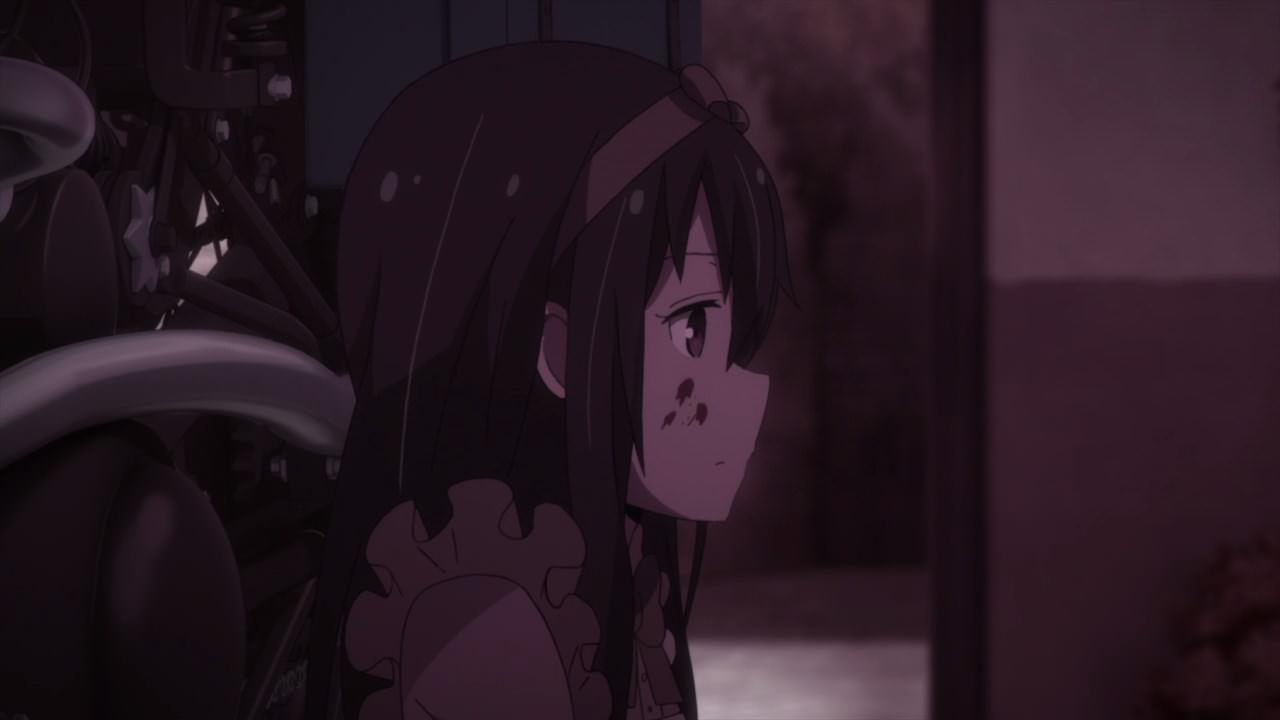 Well, except for the girl in which she’s shocked that Kino was killed by her father. With that said, she’s gonna die right here on the country of adults.

However, there’s a hope spot as Kino’s restored Motorrad told the girl that there’s a way to live in her own way. All she needs to do is to pick up the Motorrad… 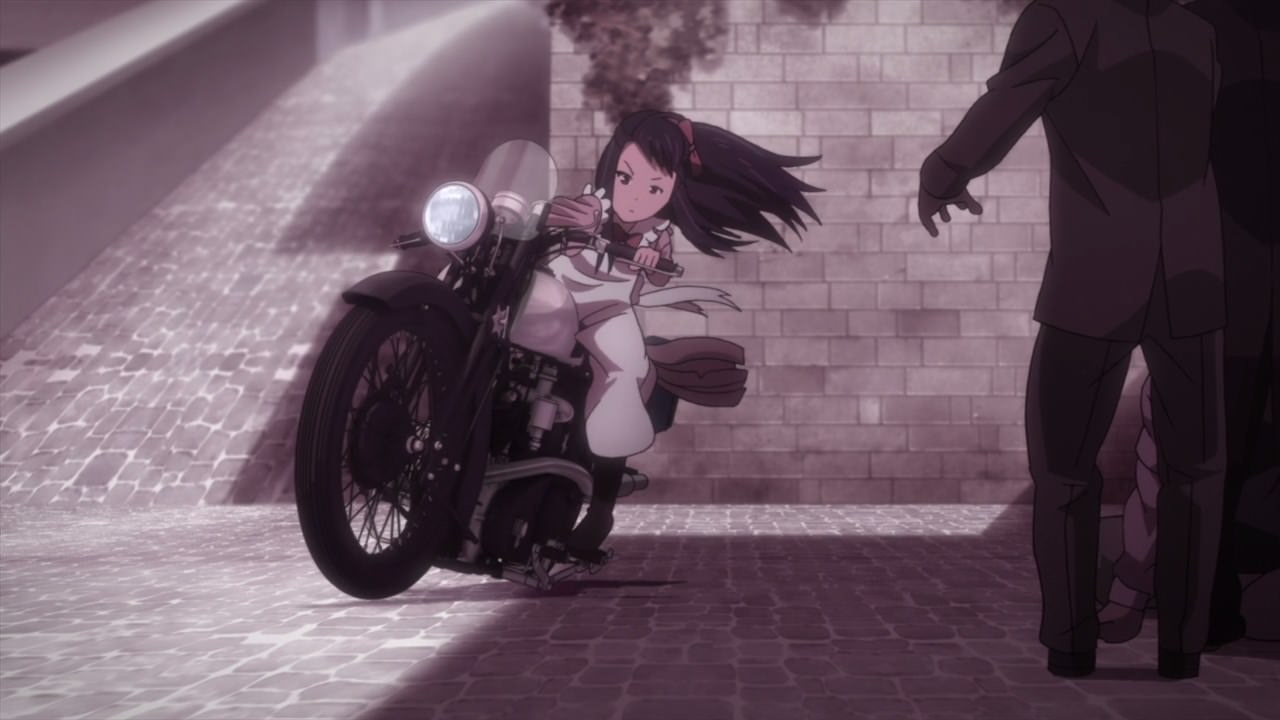 …and put on the accelerator to make her escape from the country of adults. Unfortunately for the adults, it seems that they couldn’t react fast enough to stop a defective child from escaping her country. 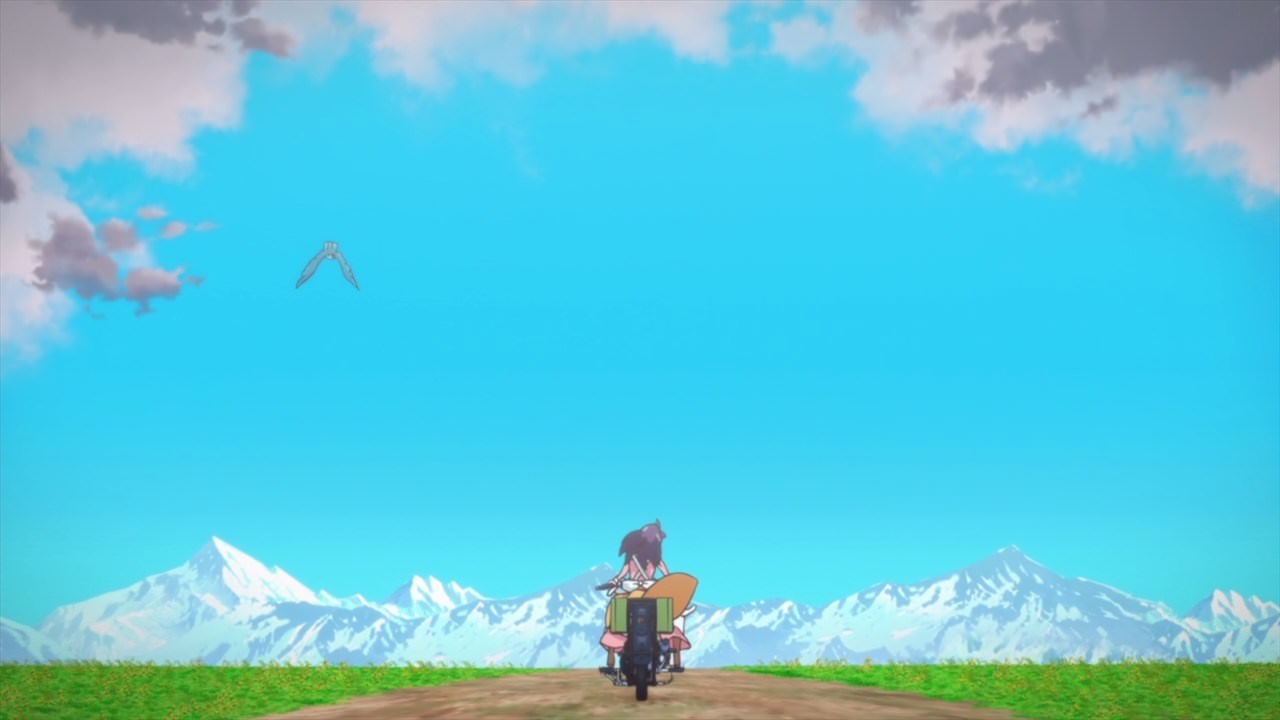 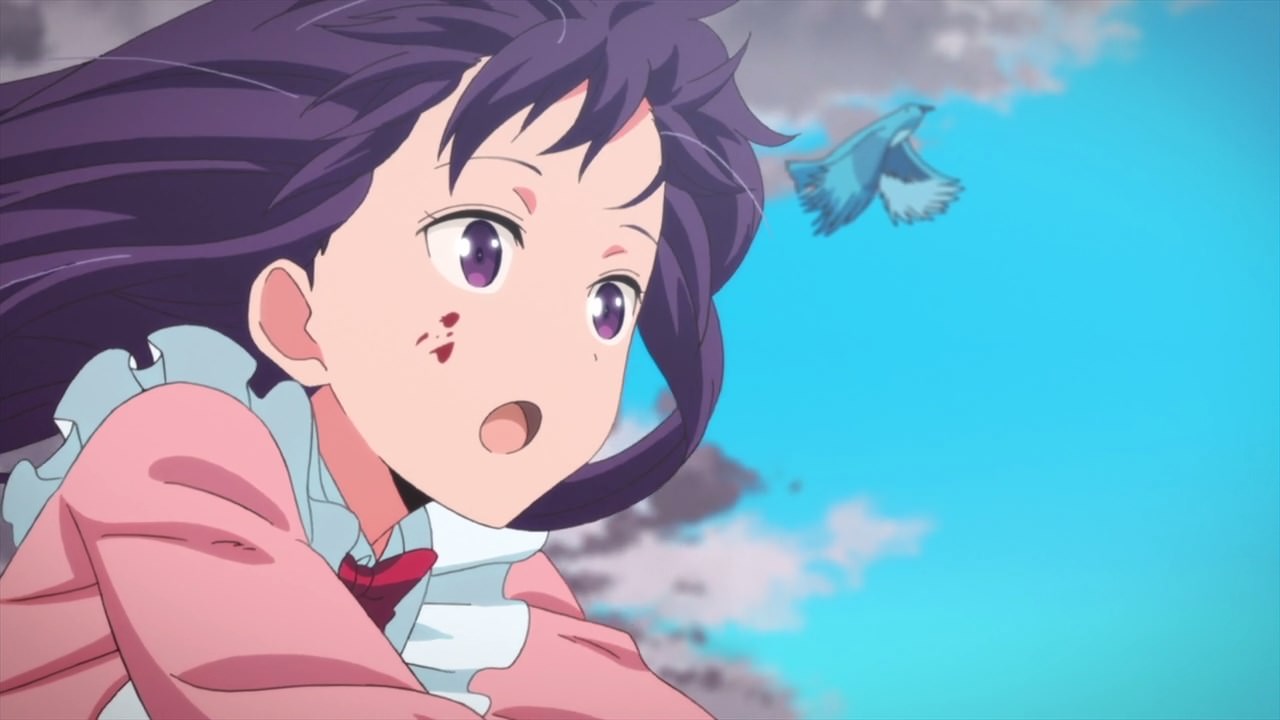 In any case, the girl has managed to escape from being executed. Unfortunately, she lost the traveler that inspired her to explore the world instead of being confined to the norms of her home country.

Now that she escaped from being killed by her parents, the Motorrad asked the girl about her name. Of course, she can’t use her embarrassing name so she called herself as Kino in honor of the traveler who inspired her to live at her own terms. As for the Motorrad, she named it as Hermes which is based on the original Kino’s former partner.

With that said, this is how Kino and Hermes began their new life as travelers and I have to say that Lerche did well on this episode much like last week. 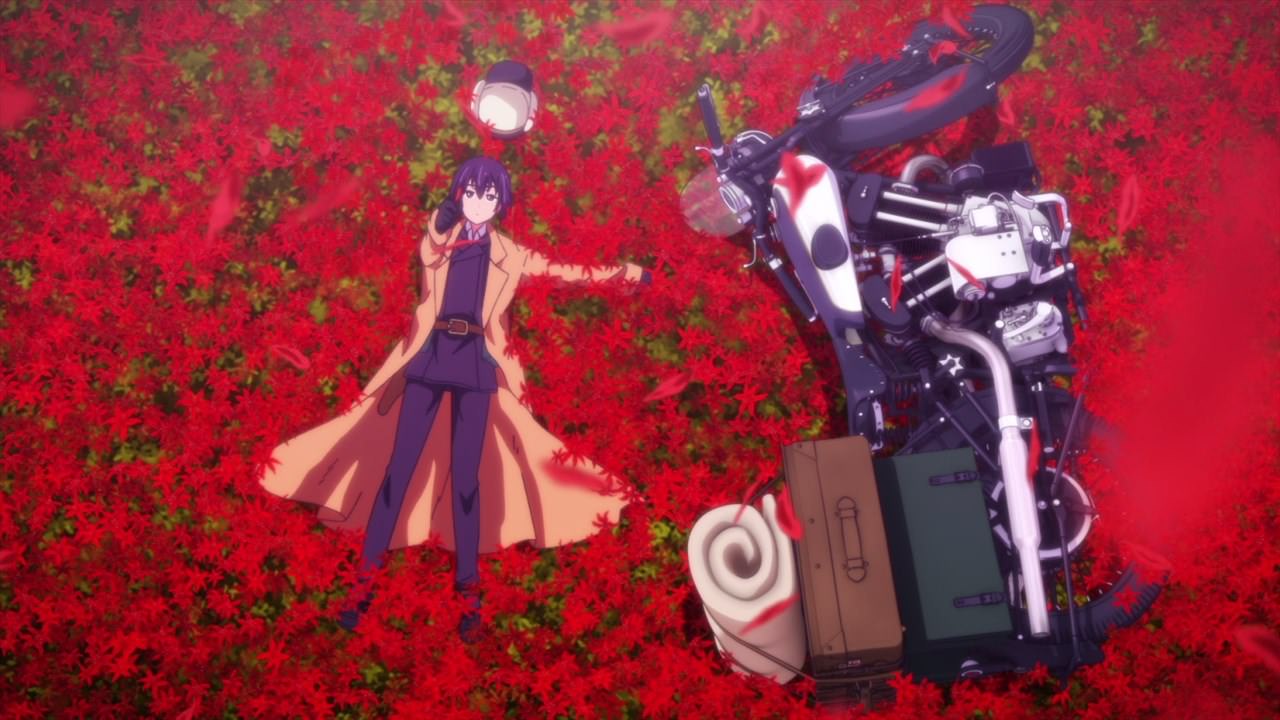 Well then, I loved how I watched Kino’s origins back in the day and watching this story again makes me feel nostalgic.

Now for the episode itself as it not only shows her country being somewhat oppressive when one individual is being forced to work at his/her designated job, but how the current Kino was inspired to become a traveler much like the original. I have to say that Kino making her escape was the right decision in my opinion and thus she transformed into her current self together with Hermes. Still, it would be nice if she revisit her country again, but I have to say that Kino is not welcomed there anymore.