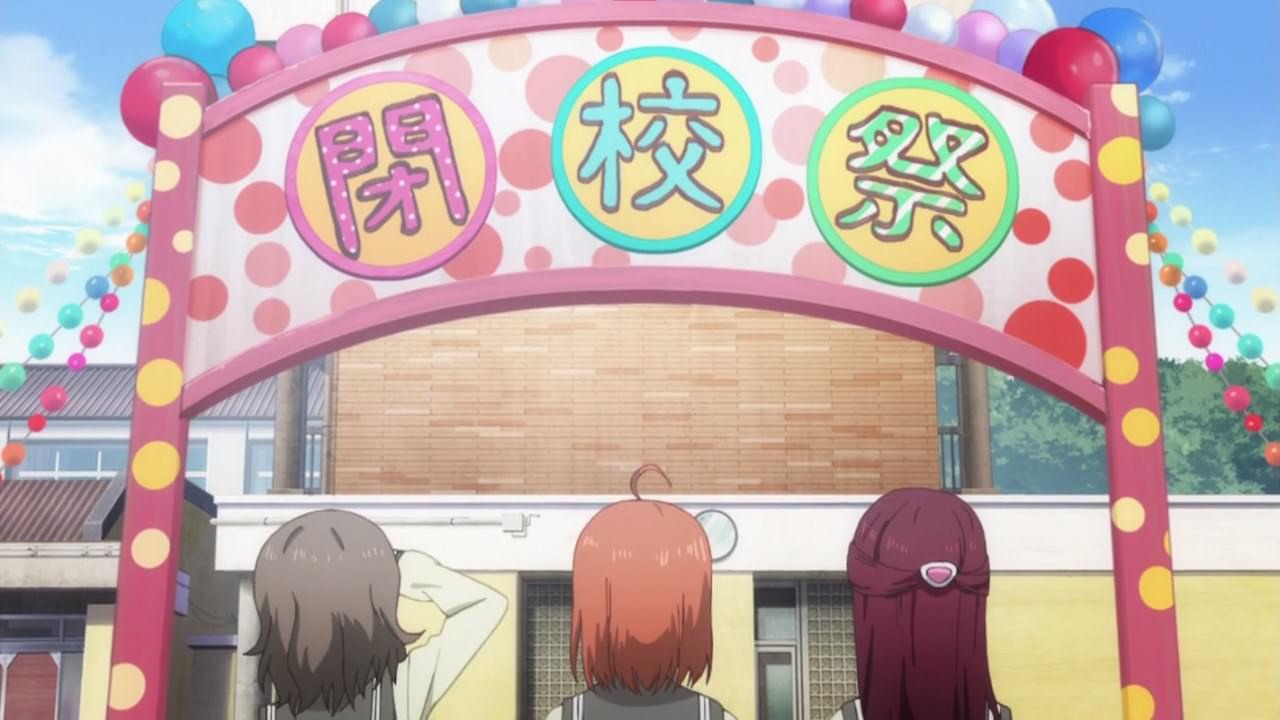 Hey everyone, here’s something special as Uranohoshi Girls’ Academy are holding their final school festival.

Yeah, it’s gonna be an emotional festival as this will be the last time that Uranohoshi will stay as their own thing until the school is consolidated by a bigger one in Numazu. 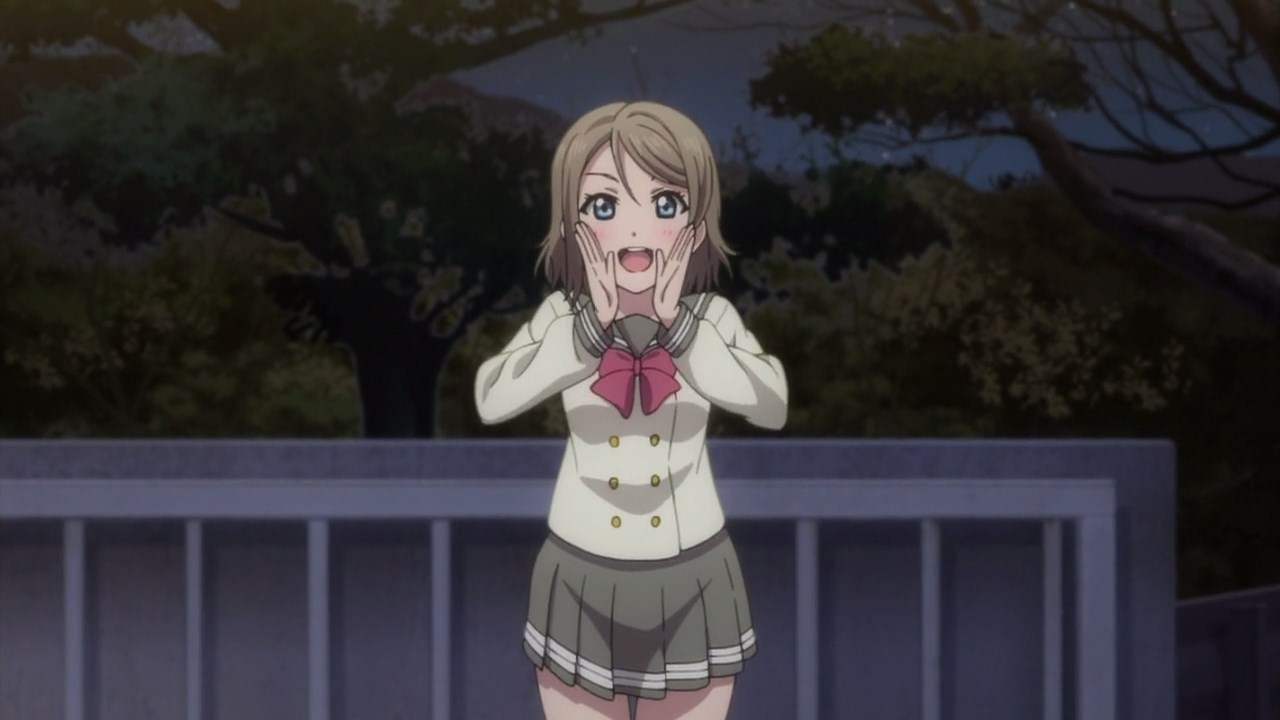 But just before the festivities, here’s a throwback as You Watanabe is recruiting students for the school idol club. 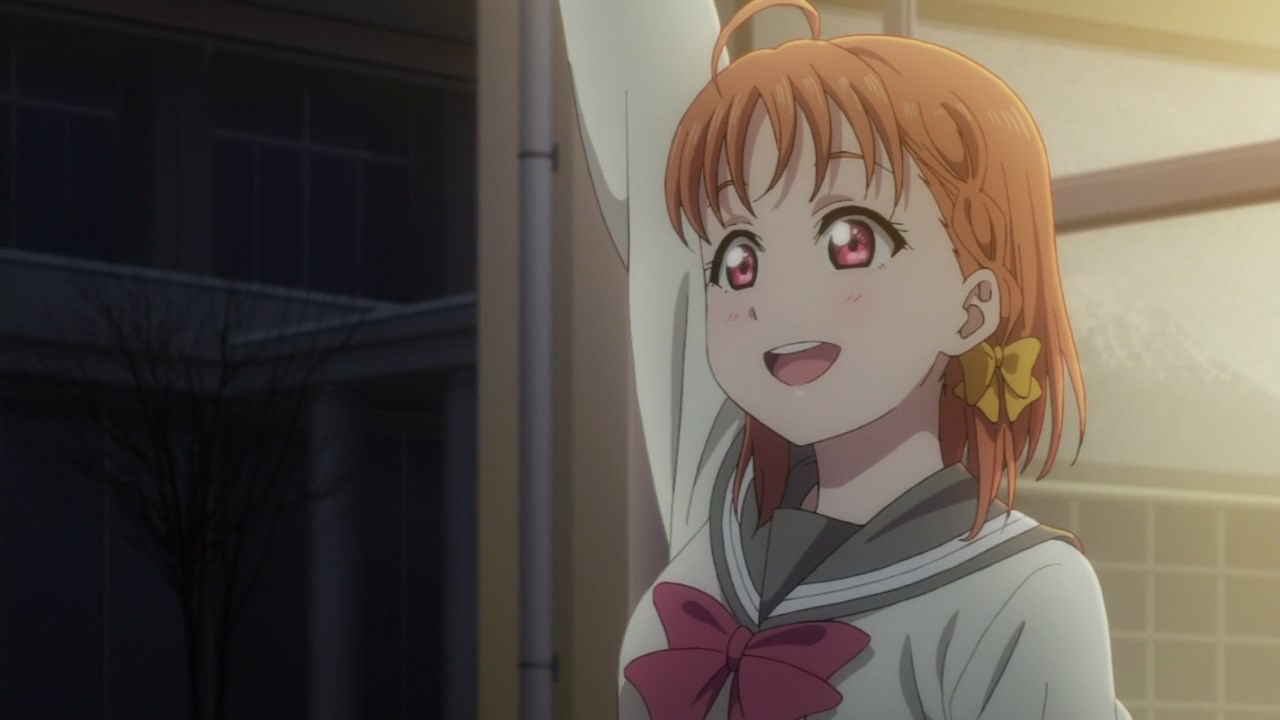 And here’s Chika Takami wanting to join the club and become a school idol.

I must say that this scene brings me memories on these two girls finding members until they got 7 more to form Aqours. 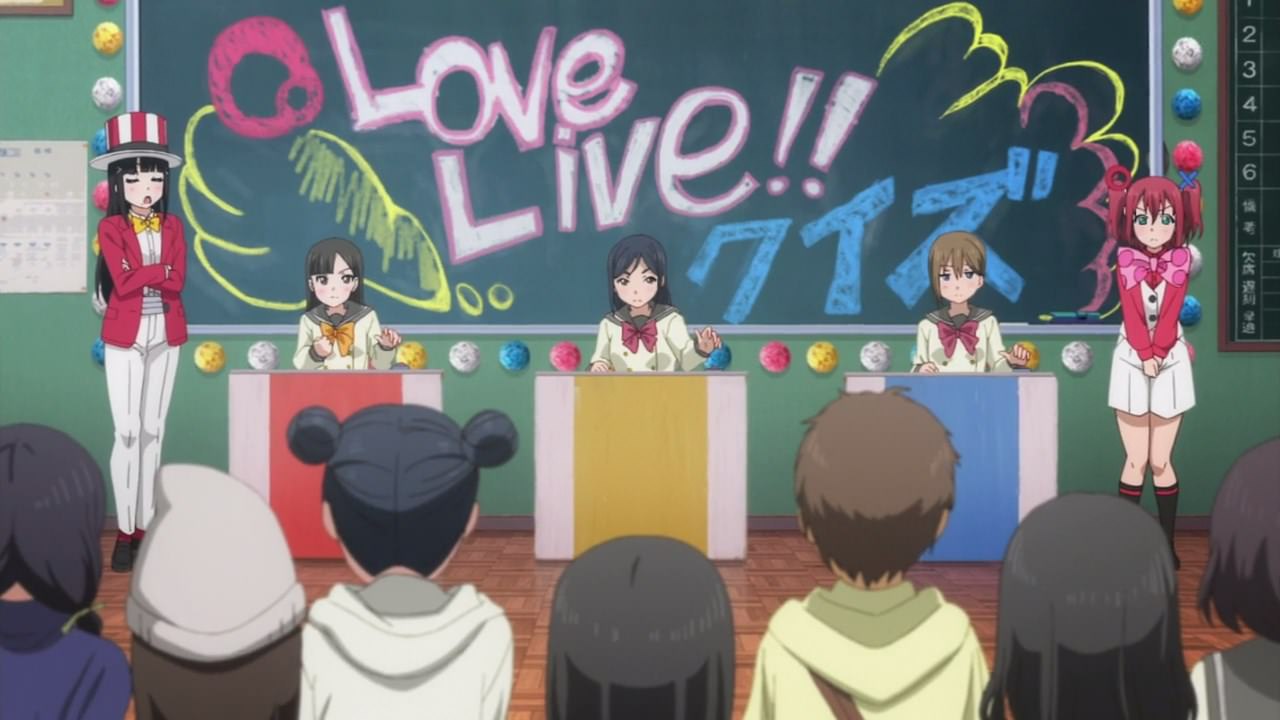 And what a way to start the festival is a Love Live! quiz hosted by the Kurosawa sisters. Good luck answering those tough questions… 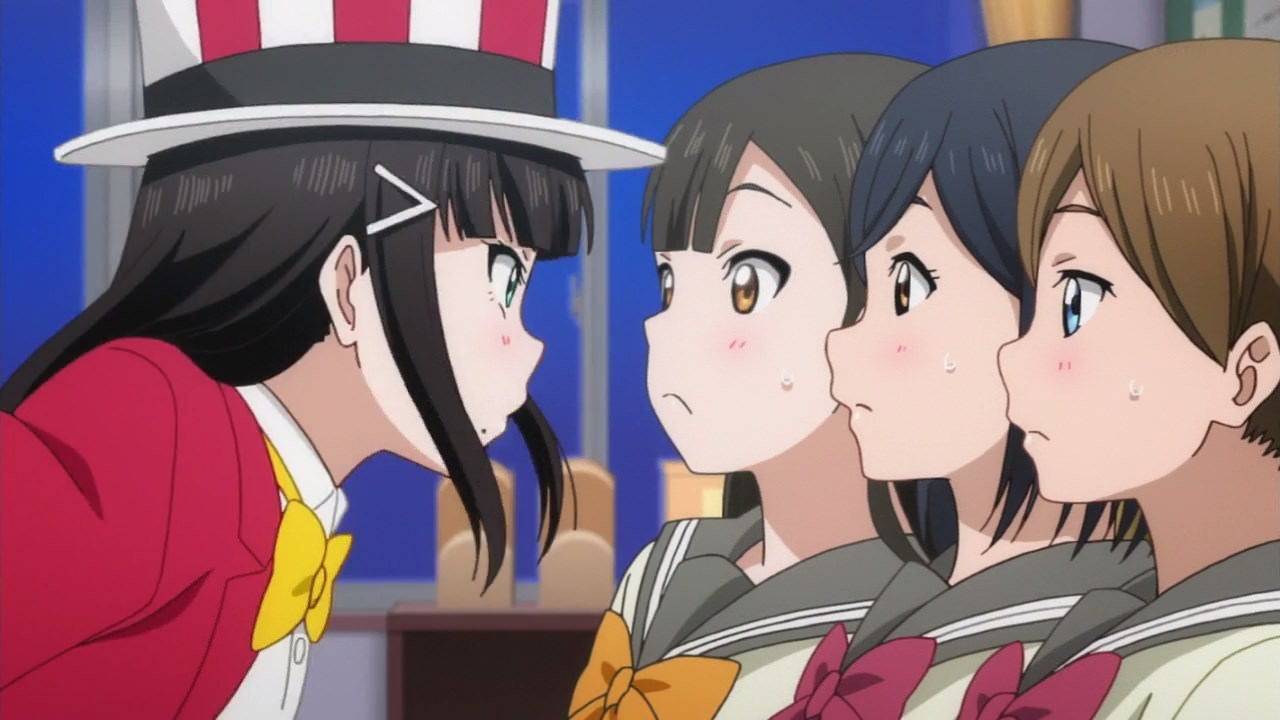 C’mon, she knows anything related to Love Live! from the competitors to its history. Don’t mess with Dia’s knowledge about school idols. 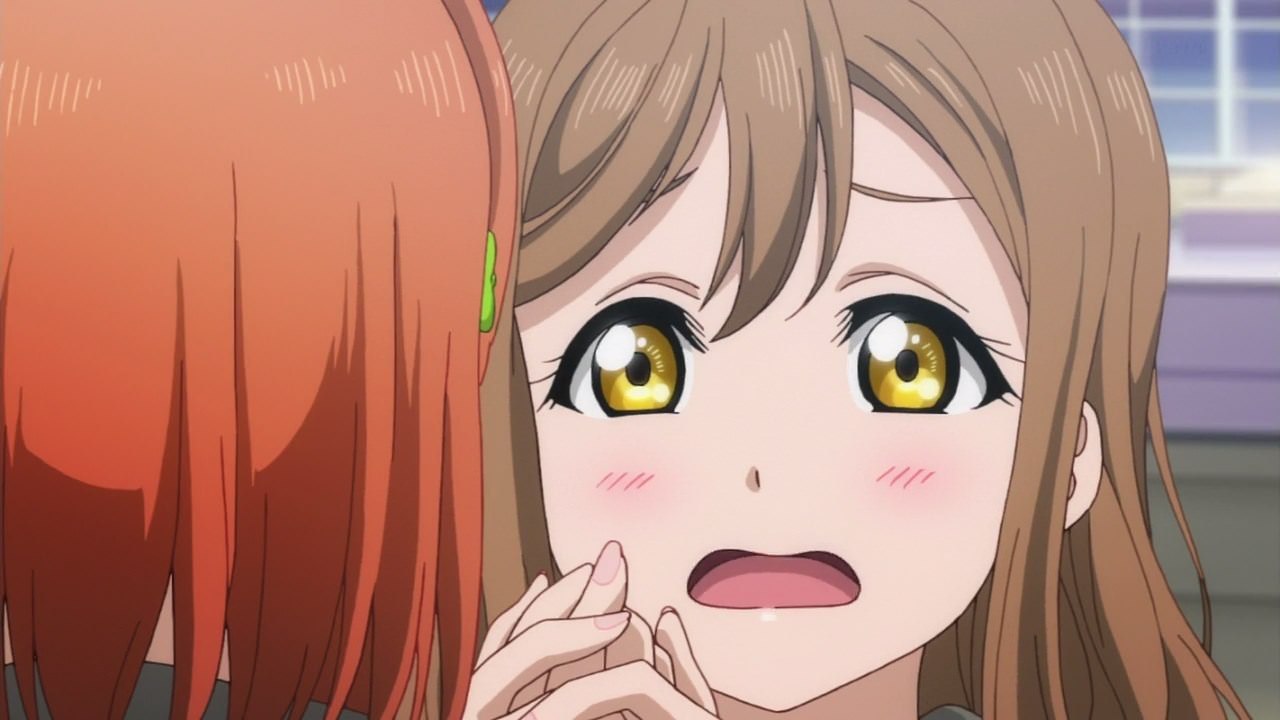 Meanwhile, we got Hanamaru Kunikida as her friend Yoshiko Tsushima is acting weird that the fortune-telling booth is creeping the hell out of those visitors. 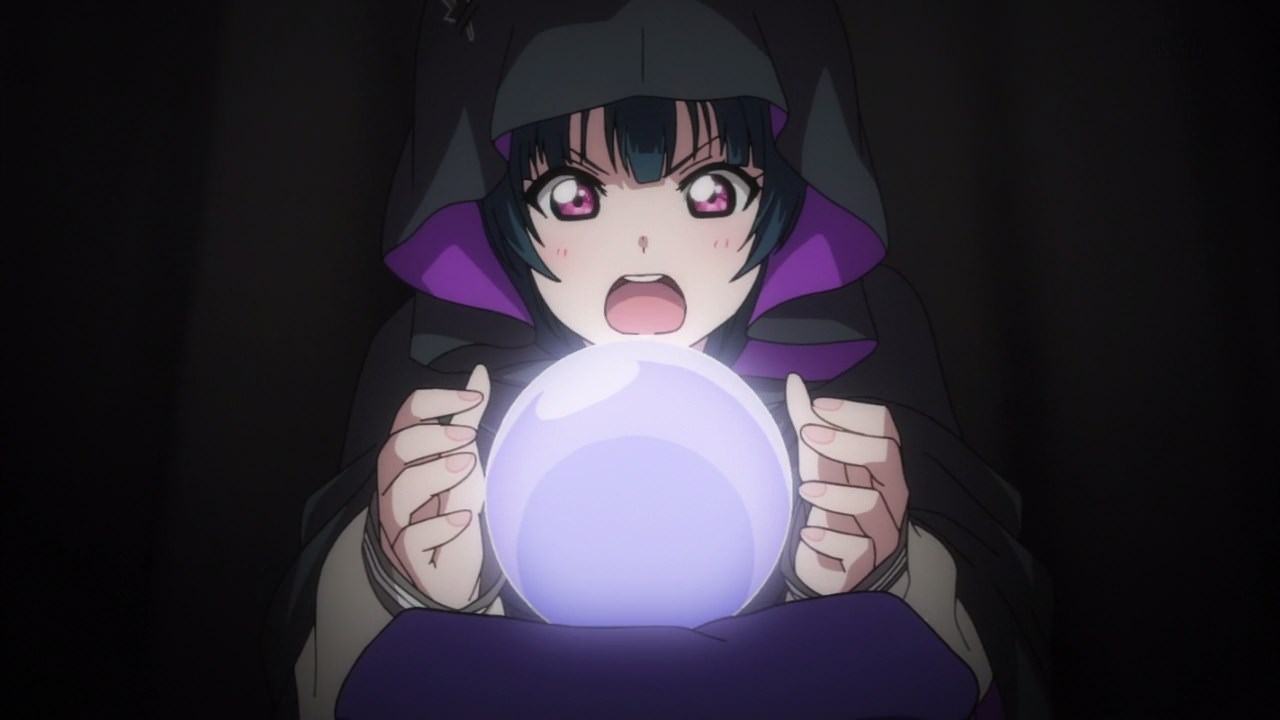 Oh sorry, I meant Yohane as she uses her demonic powers to put a curse onto visitors!

Just kidding, Yohane couldn’t do such a thing and not only that, but she’s not that good at fortune-telling. 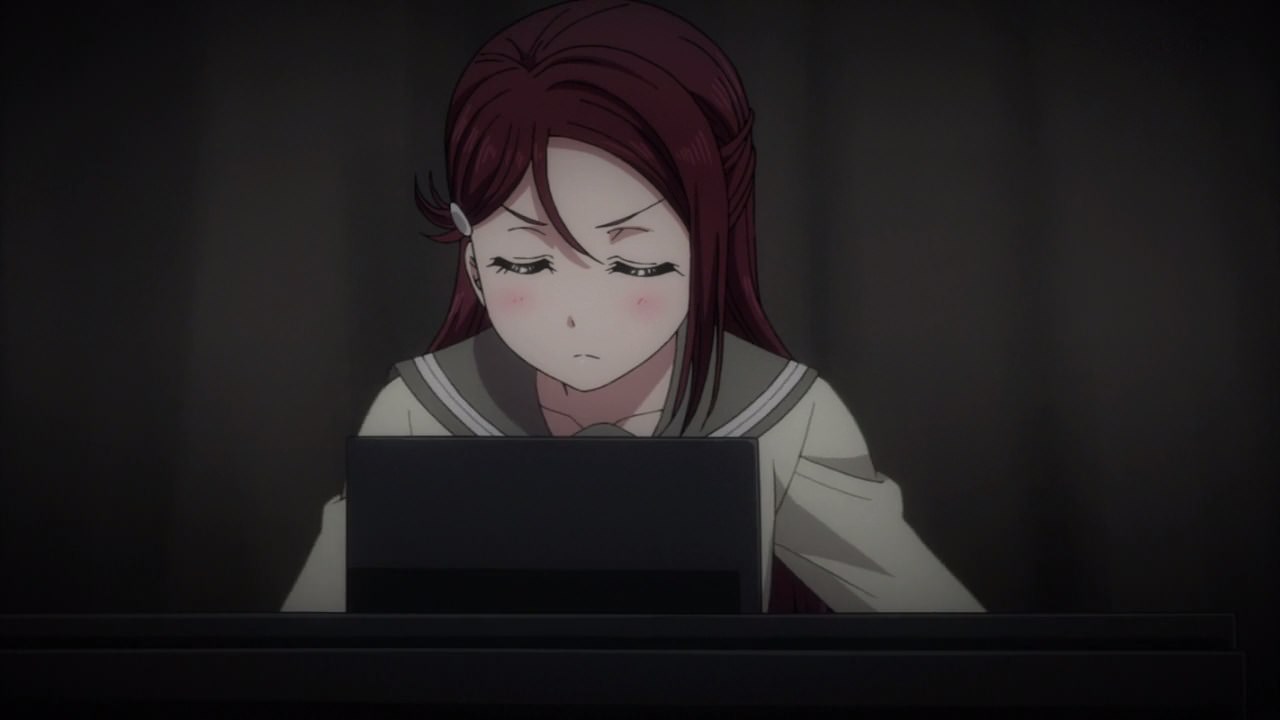 But hey, she got Riri- I mean Riko Sakurauchi manning the organ and playing spooky songs. Man, it’s no wonder why the booth didn’t get any customers. 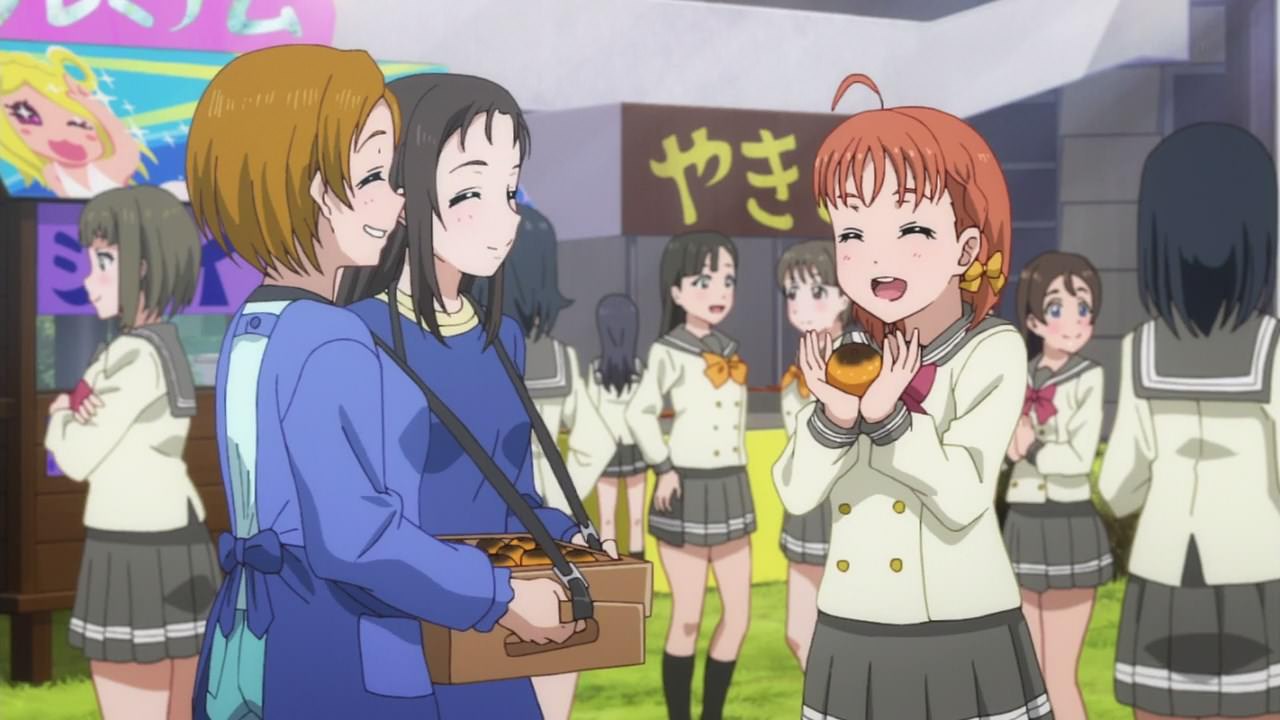 Also, here’s Chika Takami’s big sisters Mito and Shima as they give her some grilled mikan. C’mon, it’s her favorite food whether it’s ripe or grilled.

But you know what, it’s nice to see Chika’s sisters getting some spotlight again after some minor appearances in earlier episodes. Then again, I wonder where her mother is? 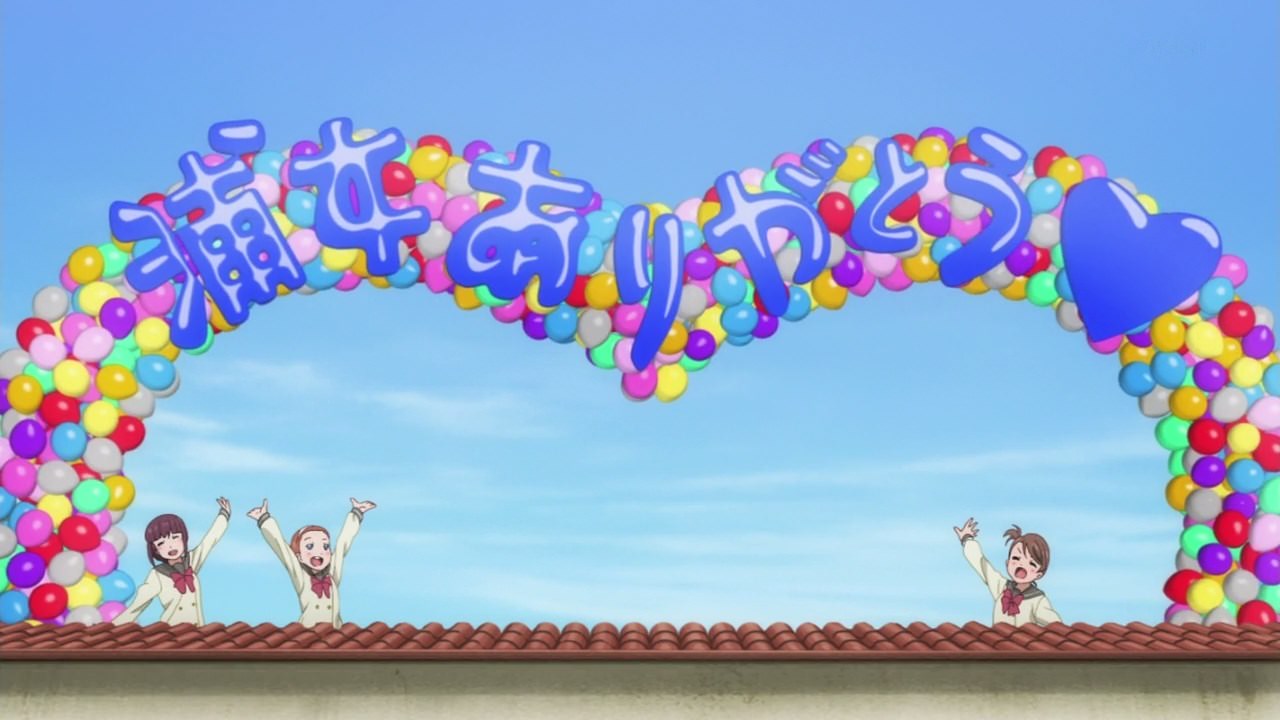 Now then, seems that the students of Uranohoshi are showing something big to Chika-chan as they brought balloons in a shape of an arc, thanking Uranohoshi Girls’ Academy for being awesome until the end! 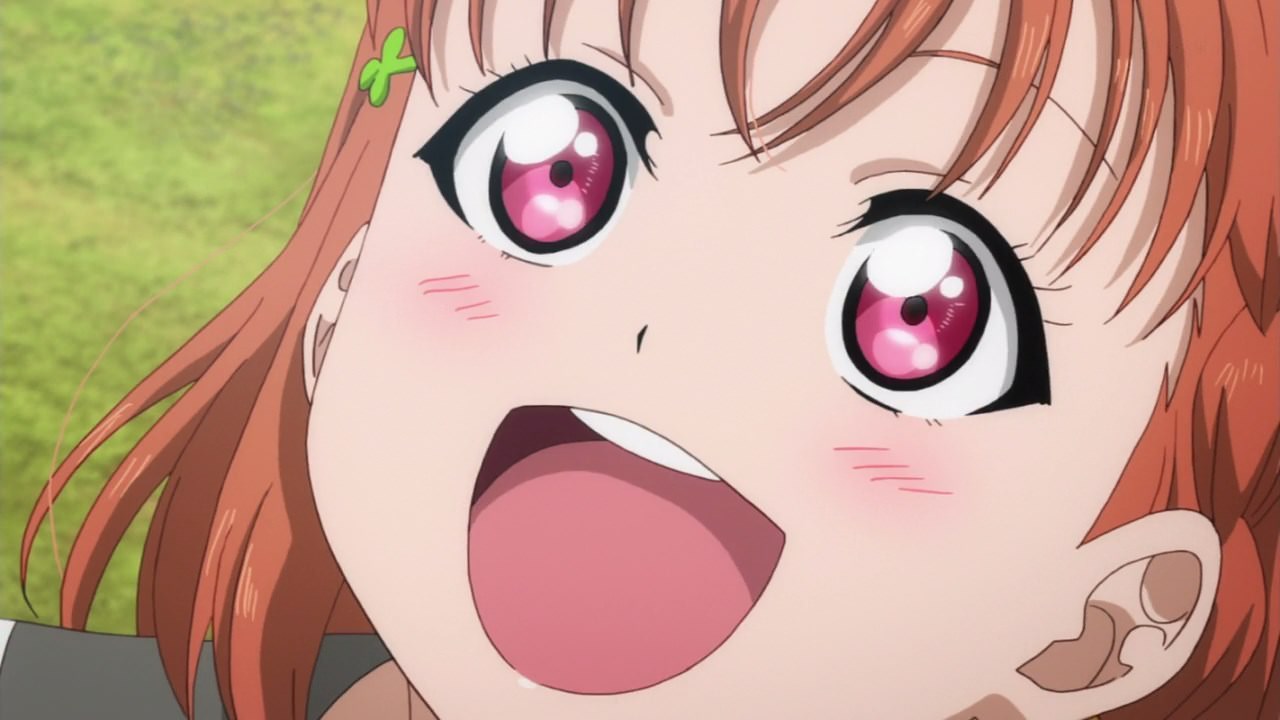 And as for Chika, she’s very happy to see it! But you know what, she and her fellow school idols will need to prepare for national tournament in the next episode. I mean, Aqours wants to close it out in style… with a victory of course! 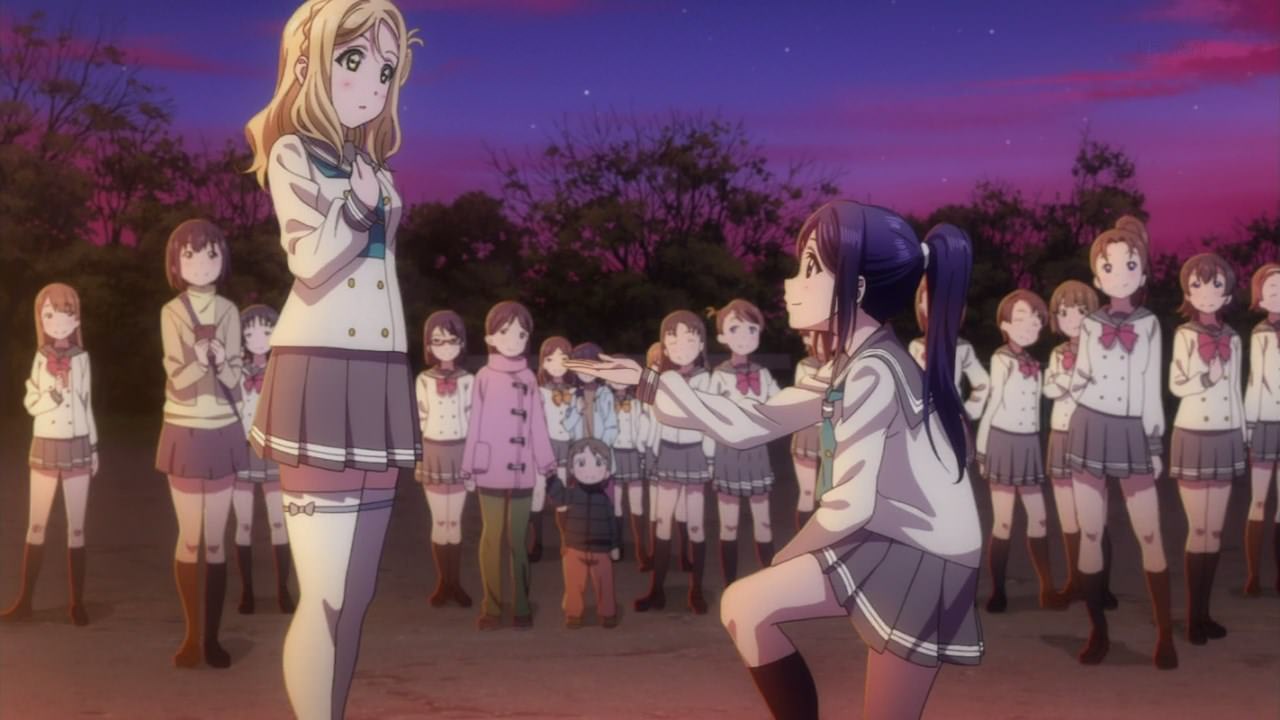 One last thing, here’s Mari Ohara getting a proposal from Kanan Matsuura. Just kidding, she wants Mari to be her dance partner, which is nice coming from Kanan-chan! 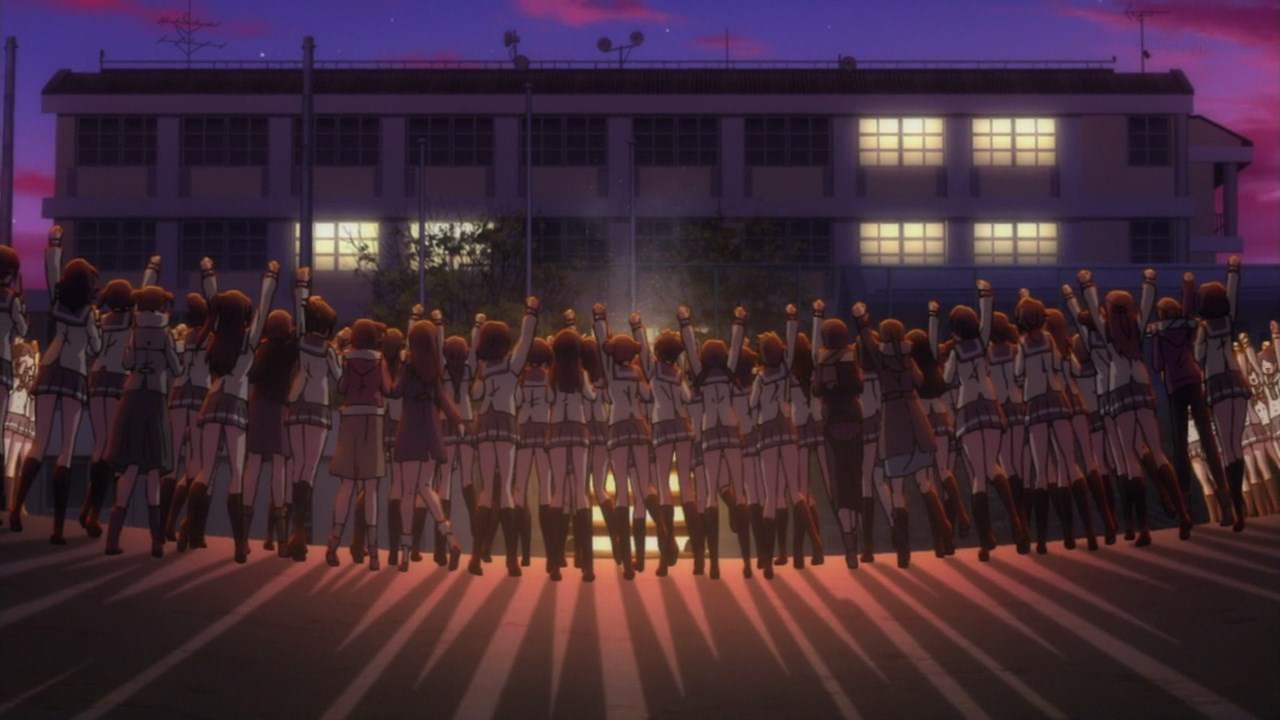 In any case, that’s about it for Uranohoshi Girls’ Academy’s final school festival as they end it with a jump around the bonfire. You know what, I feel that there should be a miracle when this school is actually saved after Aqours won Love Live!

Anyways, I’ll see you on the penultimate episode as Chika-chan and the rest are making preparations to not only have a good time in Tokyo, but to win it all!