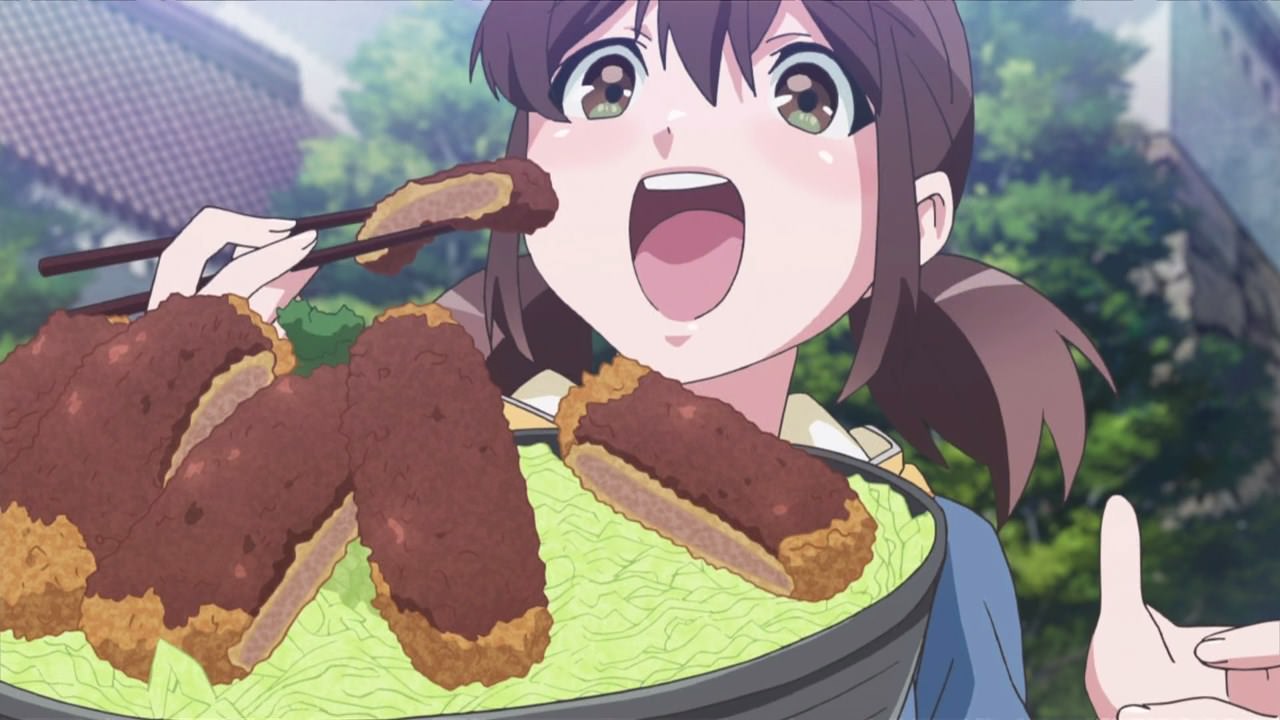 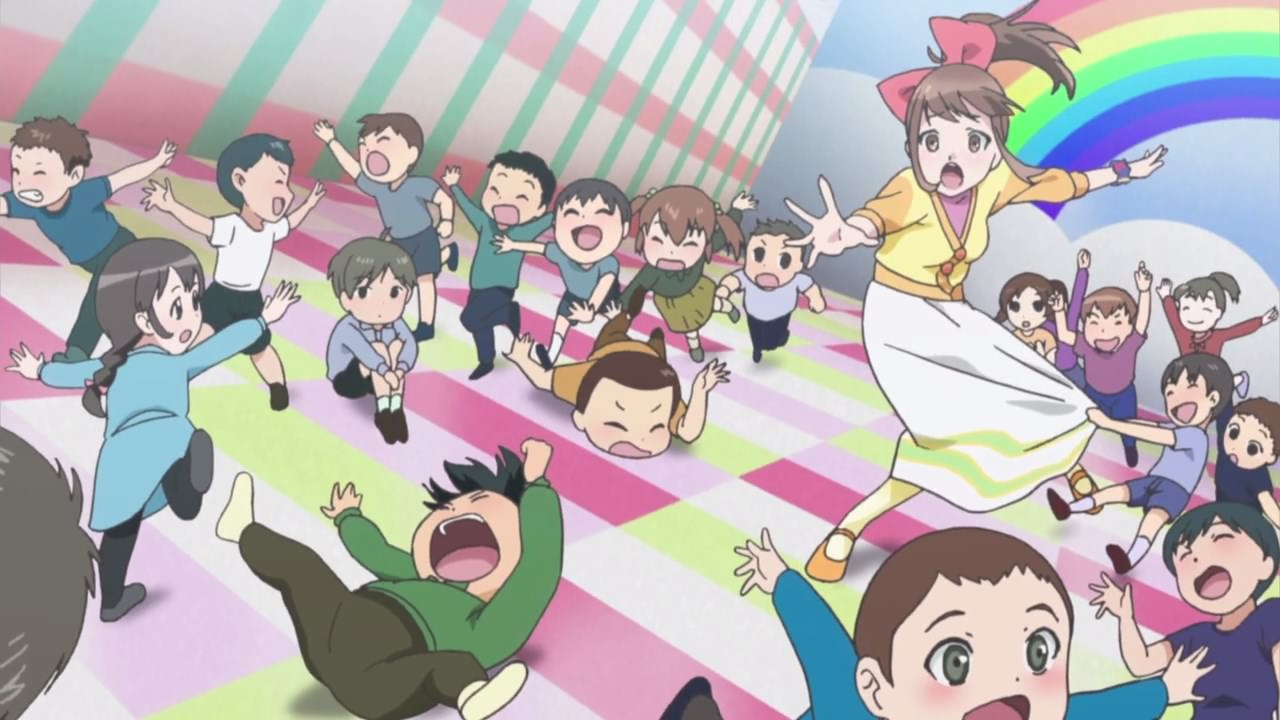 Hey everyone, it seems that Wake Up, Girls! is busy with their solo careers with Minami Katayama tasting various delicacies from the Tohoku region, while Nanami Hisami becomes a presenter to a kids show.

Unfortunately, the latter is having a hard time getting along with children while the former is taking it easy. 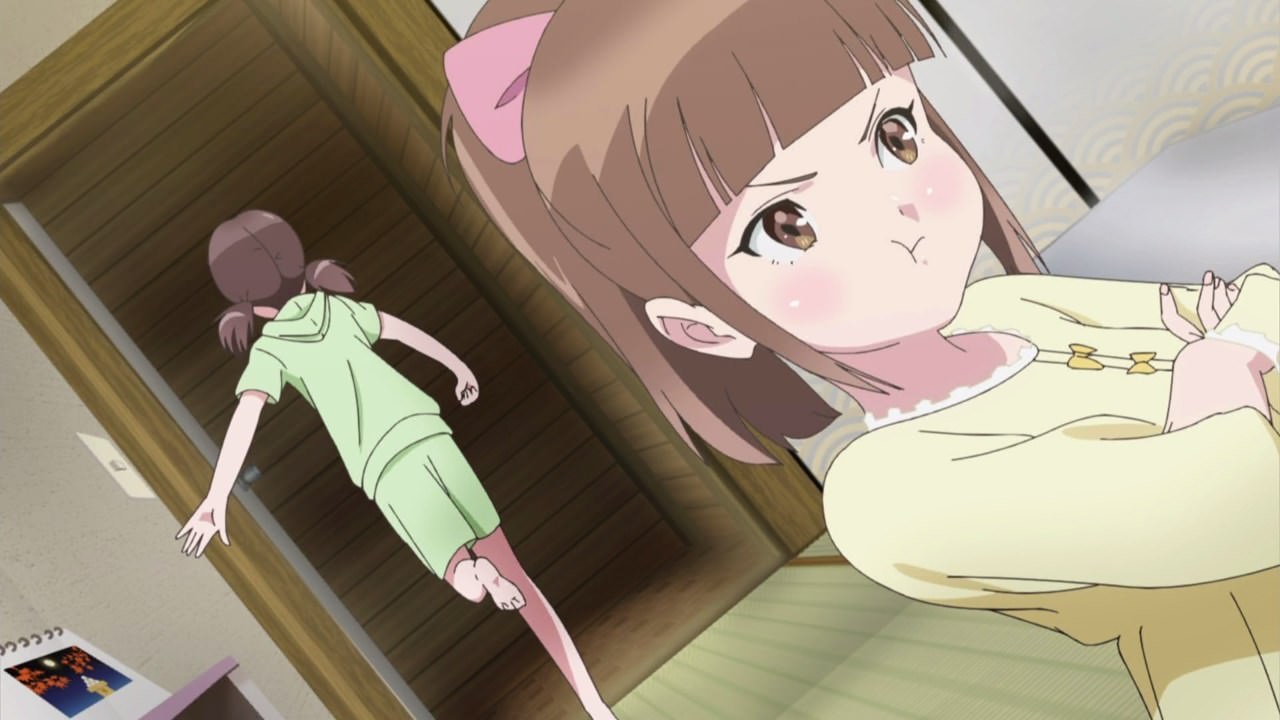 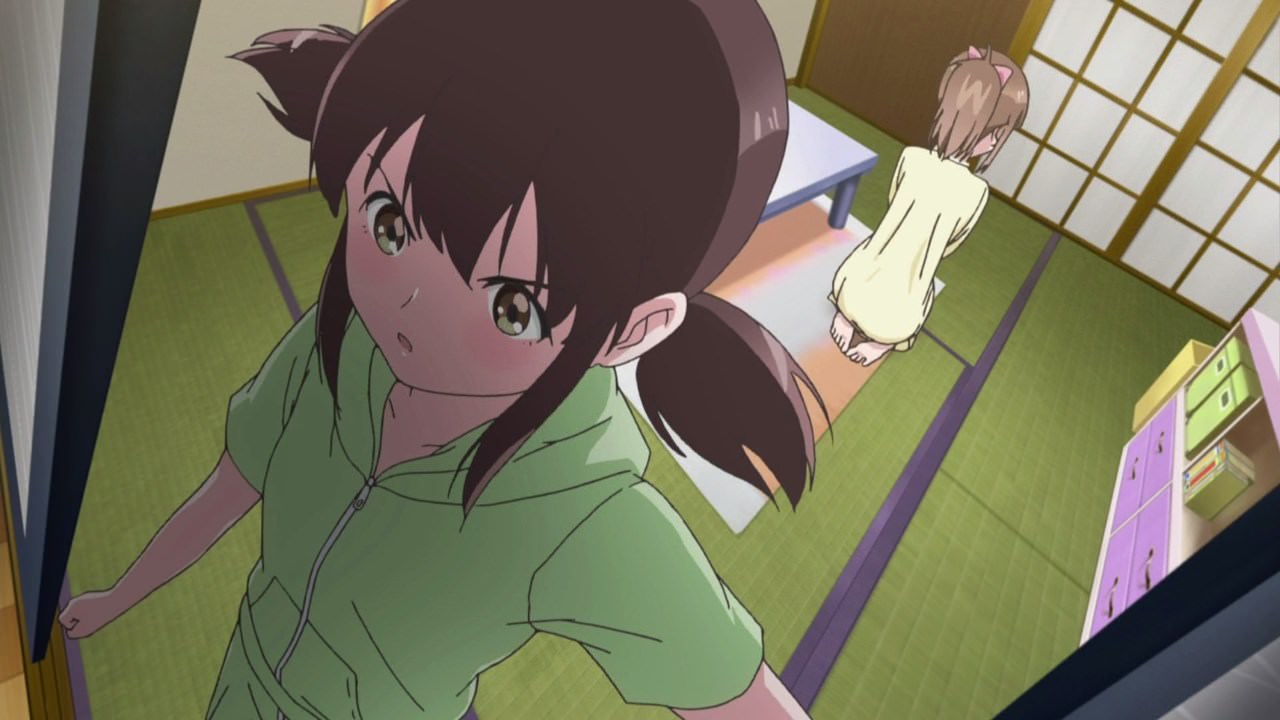 Unfortunately, things went south when Minyami and Nanamin are getting an argument with the former meeting the star of the Hikarizuka Revue, something that the latter is looking forward to see it.

Yeah, looks like WUG! is having a crisis where fellow idols are brewing up some animosity towards each other. Not a good sign there since they need to prepare for the national tour. 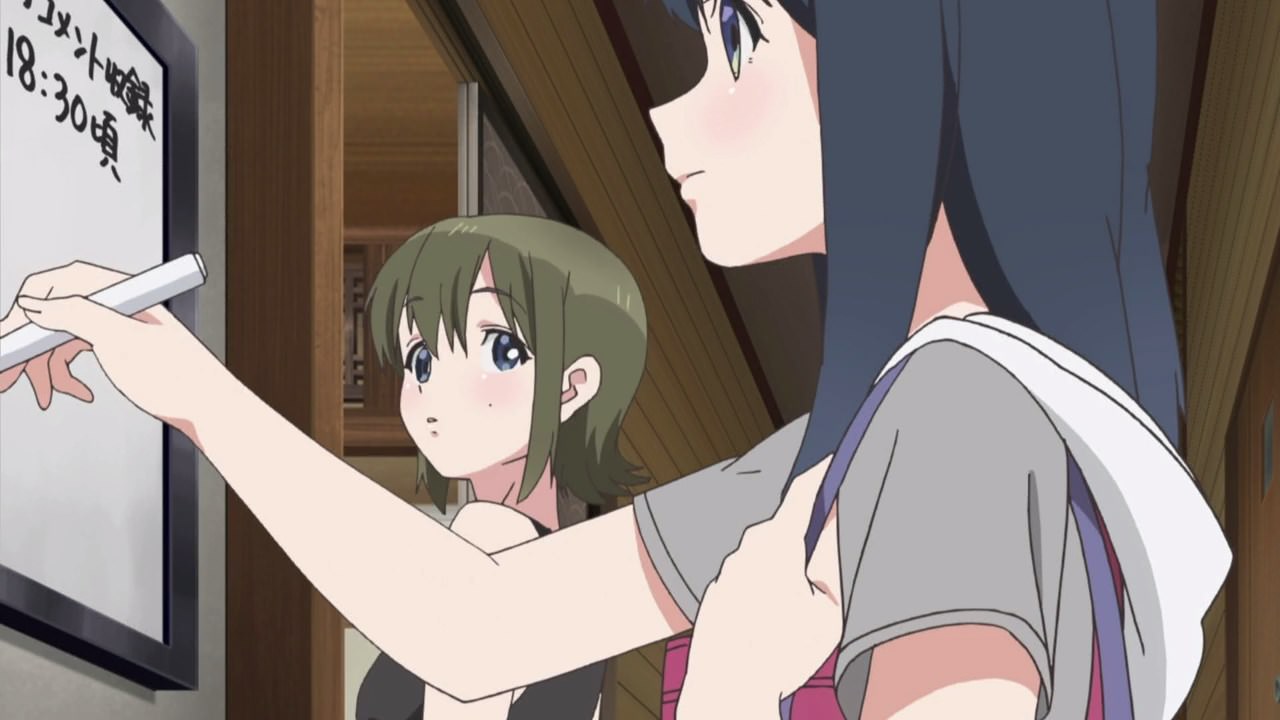 Meanwhile, Mayu Shimada wants to discuss about the lyrics for the new song so she wrote a reminder at the board. C’mon, they need to make lyrics that’s worthy of Tasuku Hayasaka’s standards. 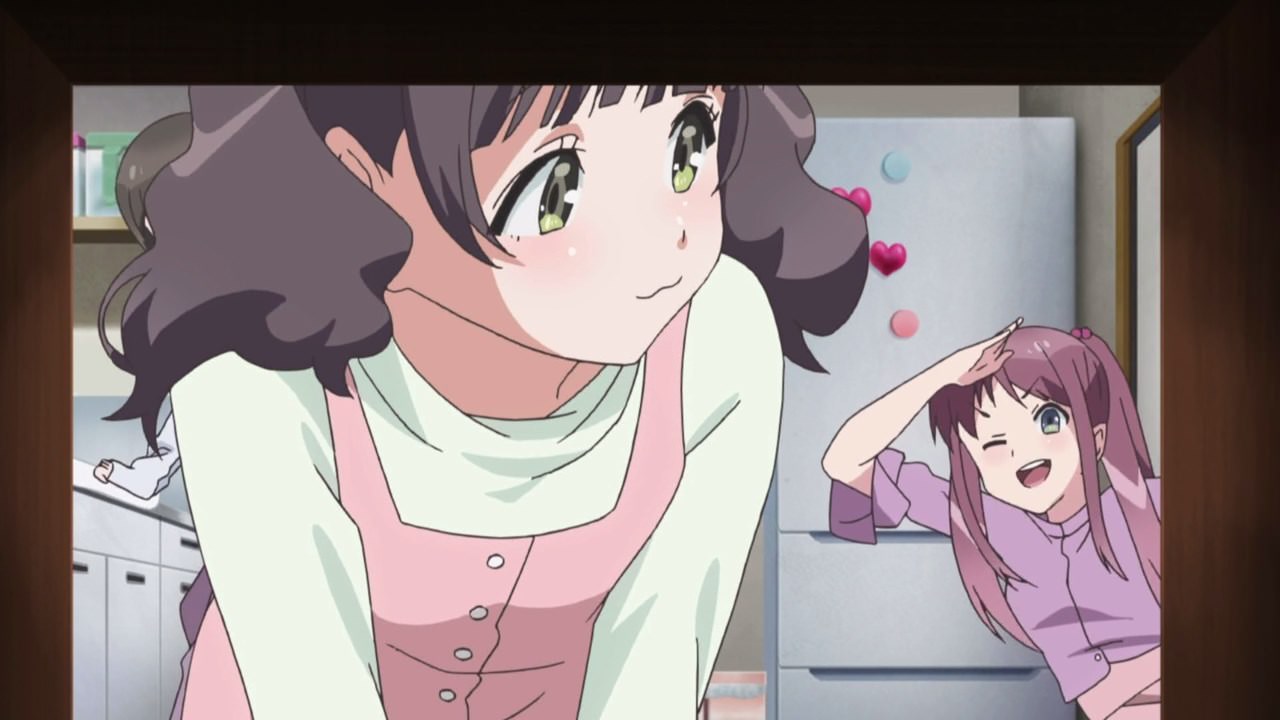 On the other hand, looks like the three idols-in-training are here to clean up the dormitory, which Miyu Okamoto felt relieved since she didn’t have much time to clean rooms due to her busy schedule. 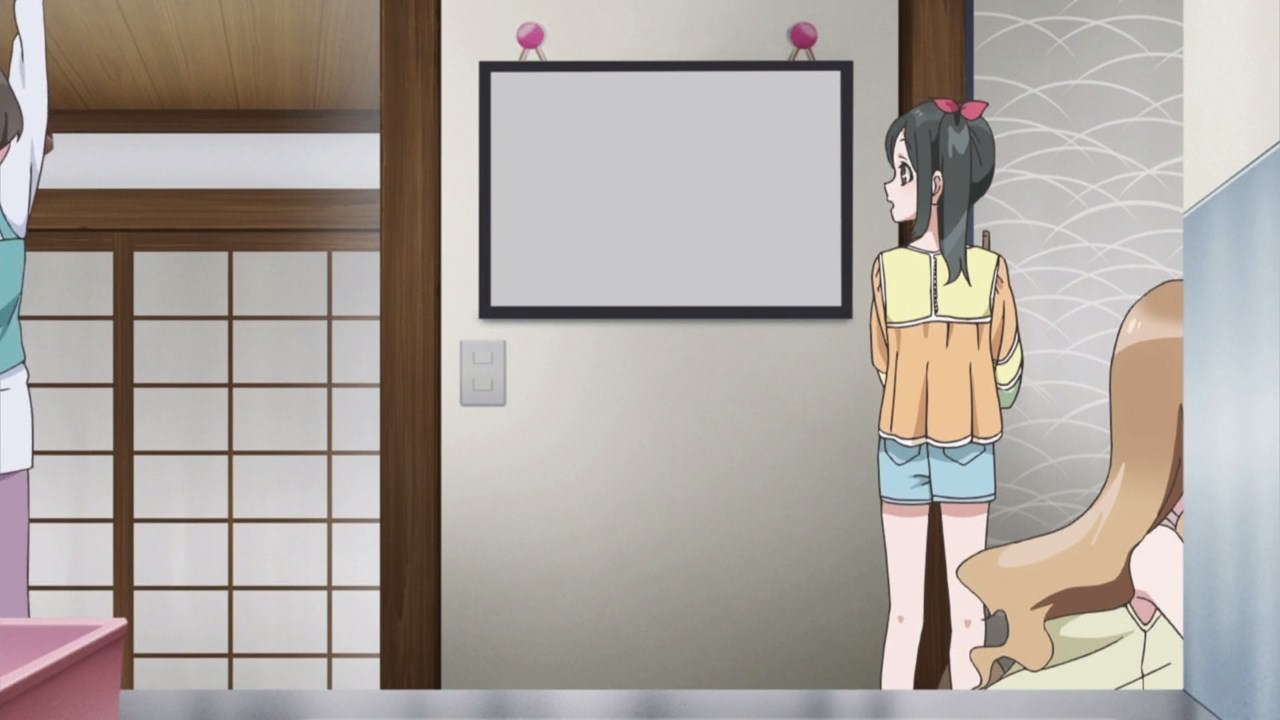 Then again, Miyu forgot to tell the trainees on not to clean up the board. Looks like Ayumi Hayashi noticed it that there’s something written there which is very important for WUG! 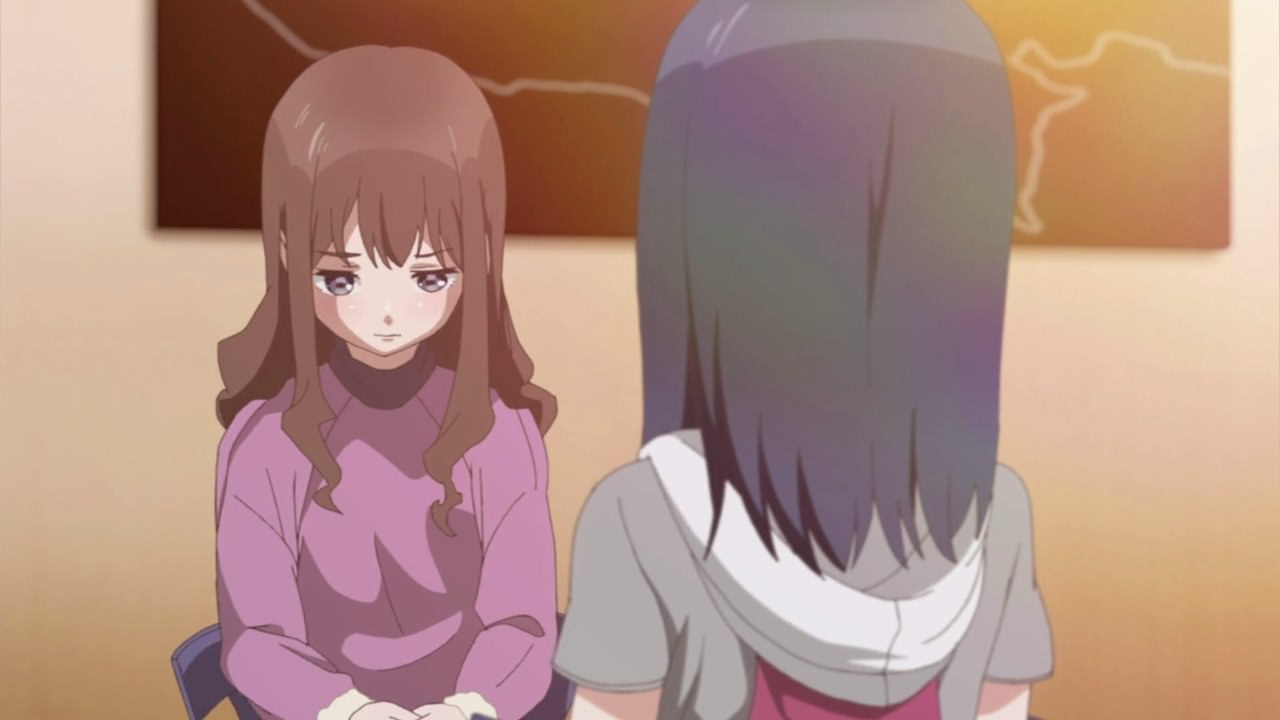 Now then, let’s move onto the next scene where the I-1 Club is closing more under-performing theaters across Japan, including Hakata where Shiho Iwasaki was devastated when Next Storm will be disbanded.

Yeah, seems that Shiho is getting the same feeling as Mayushi when she got booted out from the I-1 Club. However, Mayu Shimada will do whatever it takes to support Shiho. 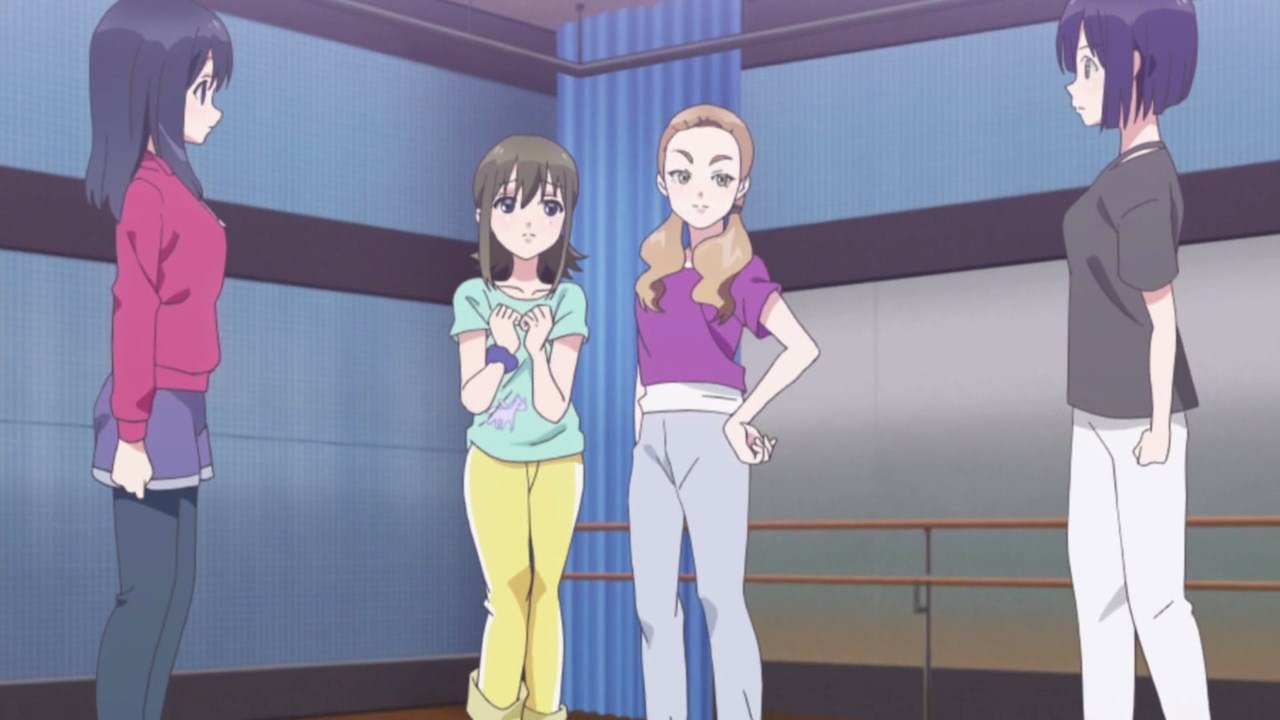 Of course, Mayushi’s fellow idols are questioning her loyalty as she was supposed to meet them for a discussion.

On top of that, Yoshino Nanase asked Mayu Shimada regarding her scrunchie in which she accidentally lost it. Oh boy, things are not looking good for WUG! as their friendship might broke down! 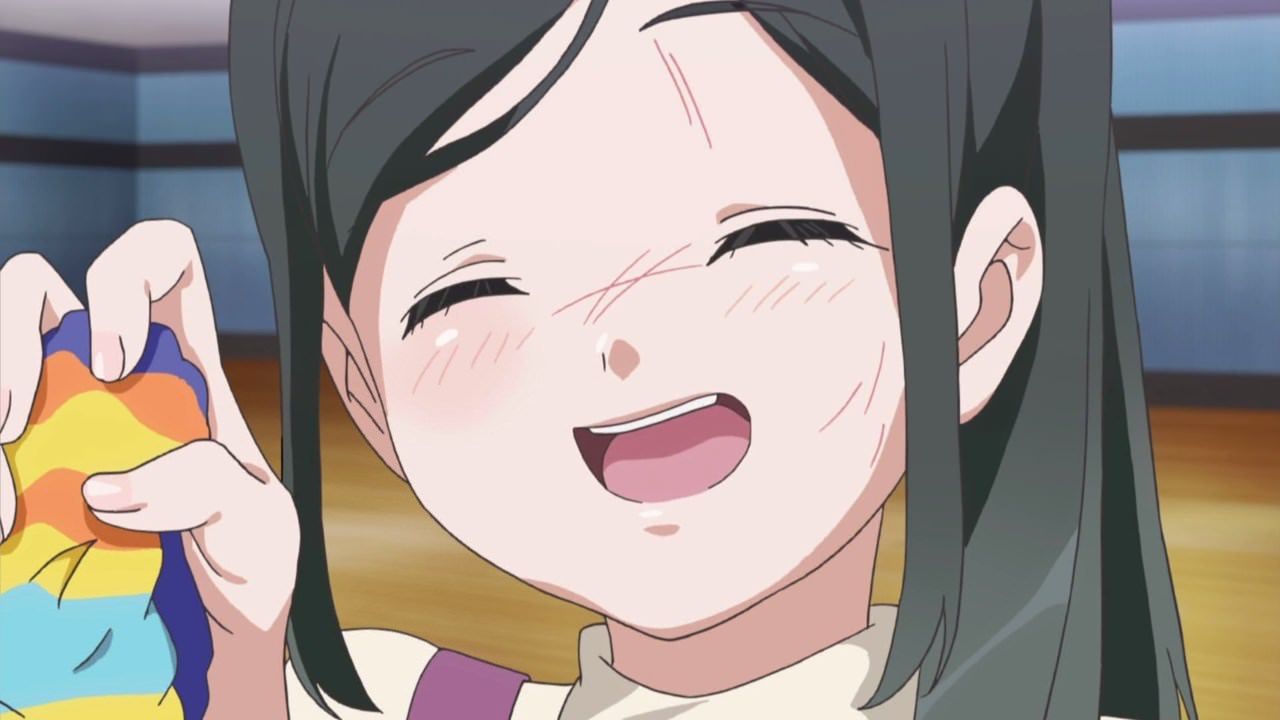 Fortunately, Ayumi Hayashi saved the day when she found Mayushi’s scrunchie, although Ayumi got some scratches as she tries to get it from a cat. 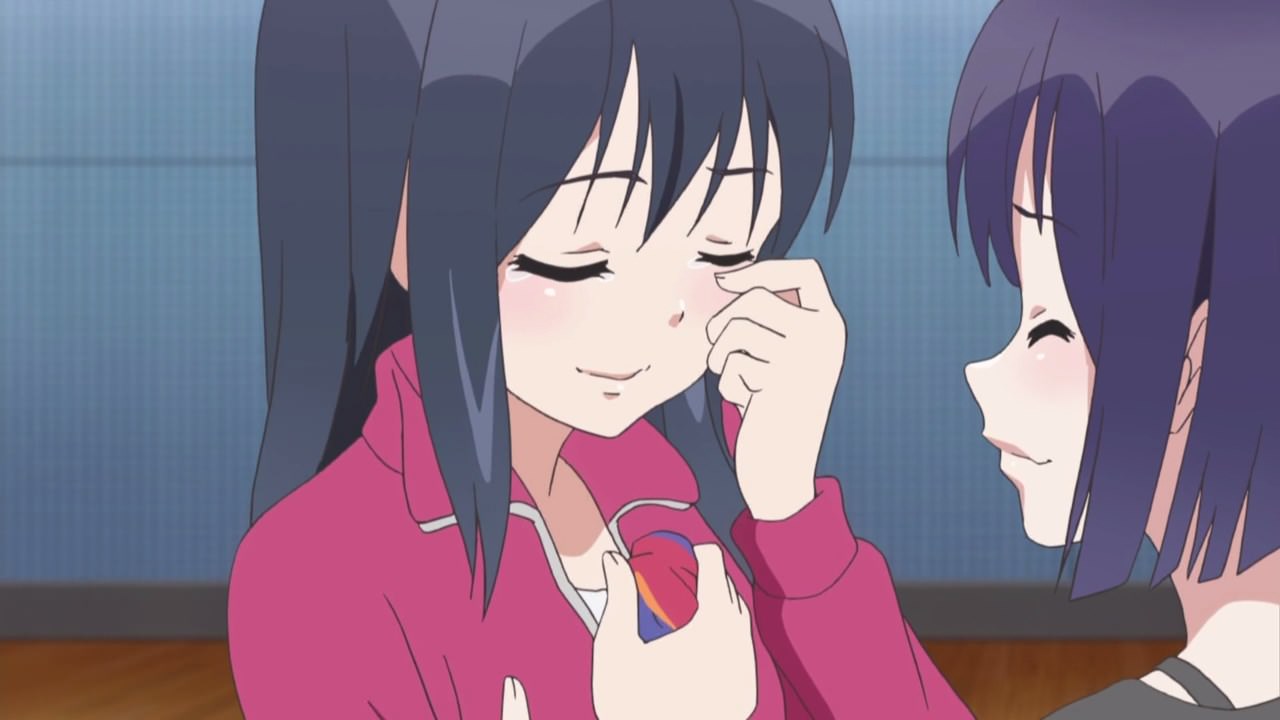 But hey, all’s well that ends well when Mayu told Yoshino regarding the truth that Shiho has a similar situation to her and she wanted to help no matter what.

Oh yeah, and it’s not like Mayu Shimada would betray Wake Up, Girls! as it was thanks to the like of Yoshino Nanase and Airi Hayashida that Mayushi has a place to return to. Therefore, Yoppi forgive Mayushi which is a good thing. 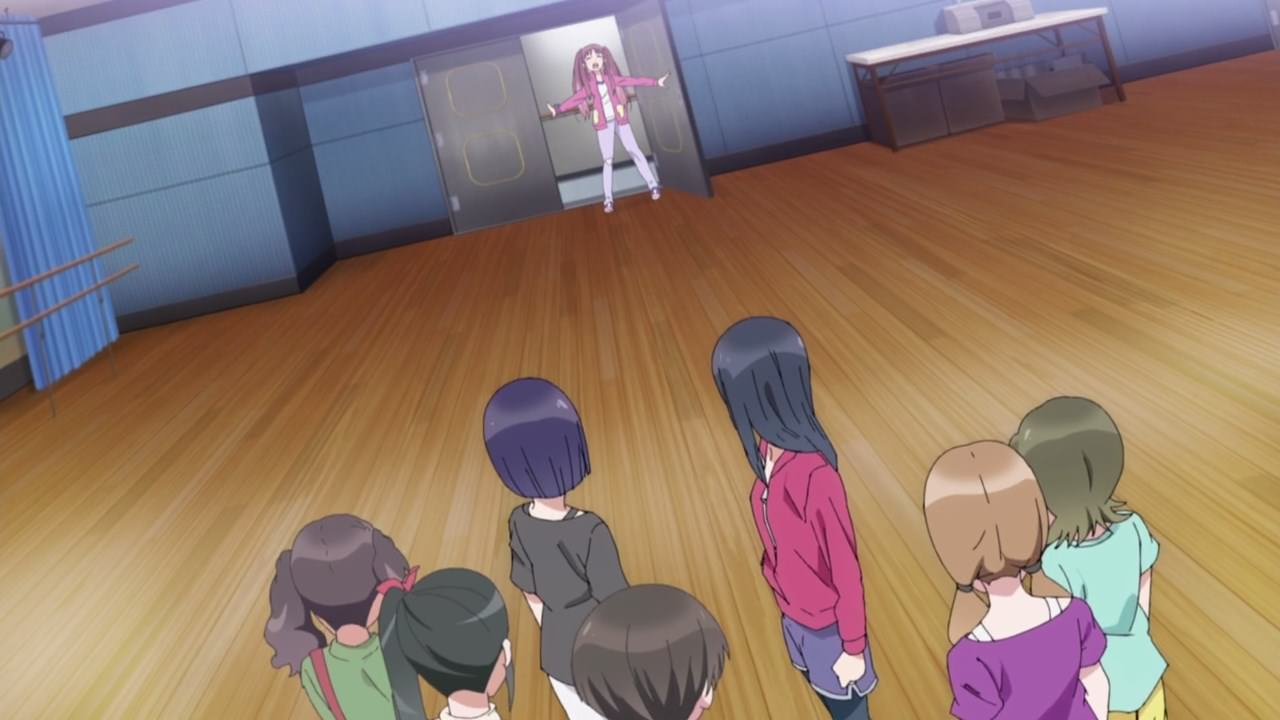 On the other hand, Miyu Okamoto apologized to her friends that it was her fault for not telling the trainees on not to erase the board.

But you know what, it would be better if they could write important things on a notebook and share it to the rest of WUG! so that they could sort things out. 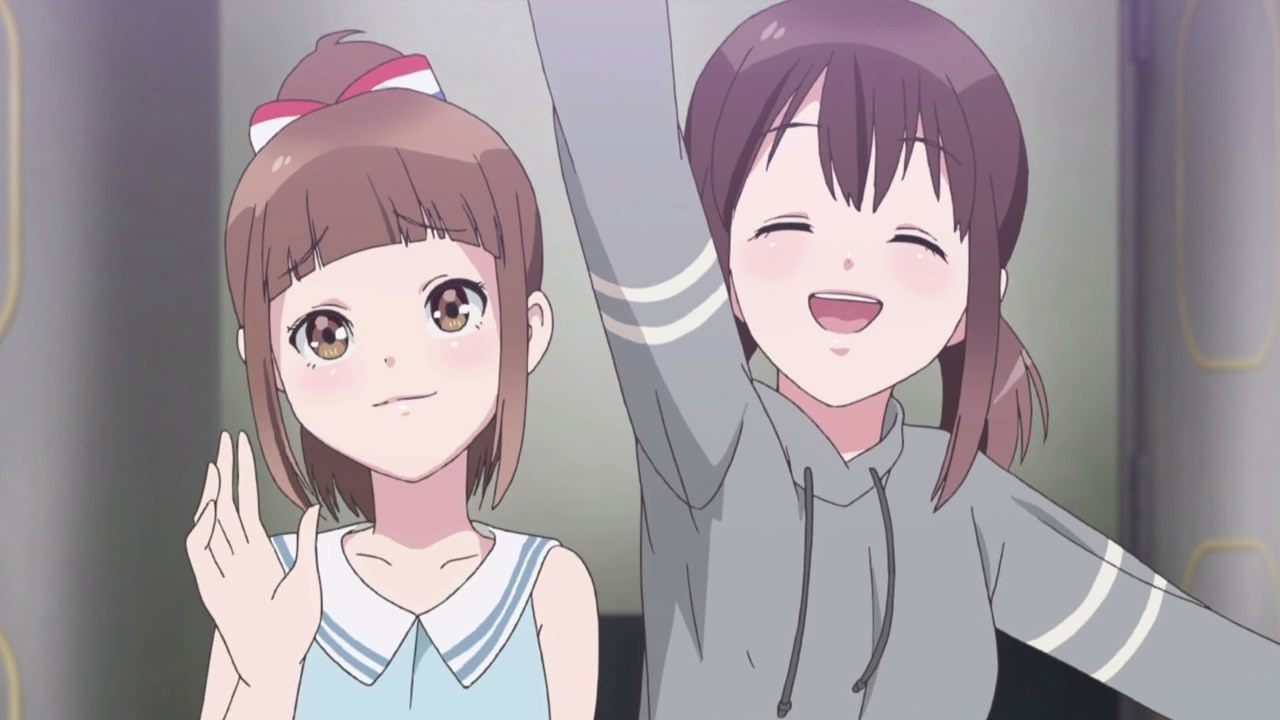 Also, seems that both Nanami Hisami and Minami Katayama have finally reconciled. Seems that Wake Up, Girls! is back together at last.

One last thing, it seems that WUG! found their answer on making their own lyrics as they can create one based on their camaraderie. While they’re weak individually, these 7 girls are stronger when united. I have to say that Mayushi and the rest are ready to make some lyrics that’s worthy of Hayasaka’s newest composition.

With that said, I’ll see you next time and let’s hope that WUG! will have a successful national concert tour. Of course, they need to overcome big obstacles like the I-1 Club where Tooru Shiraki will create a super idol group where 9 girls are selected, including Shiho Iwasaki. Oh, and let’s not forget the planned concert from the rising virtual idol Makina X.