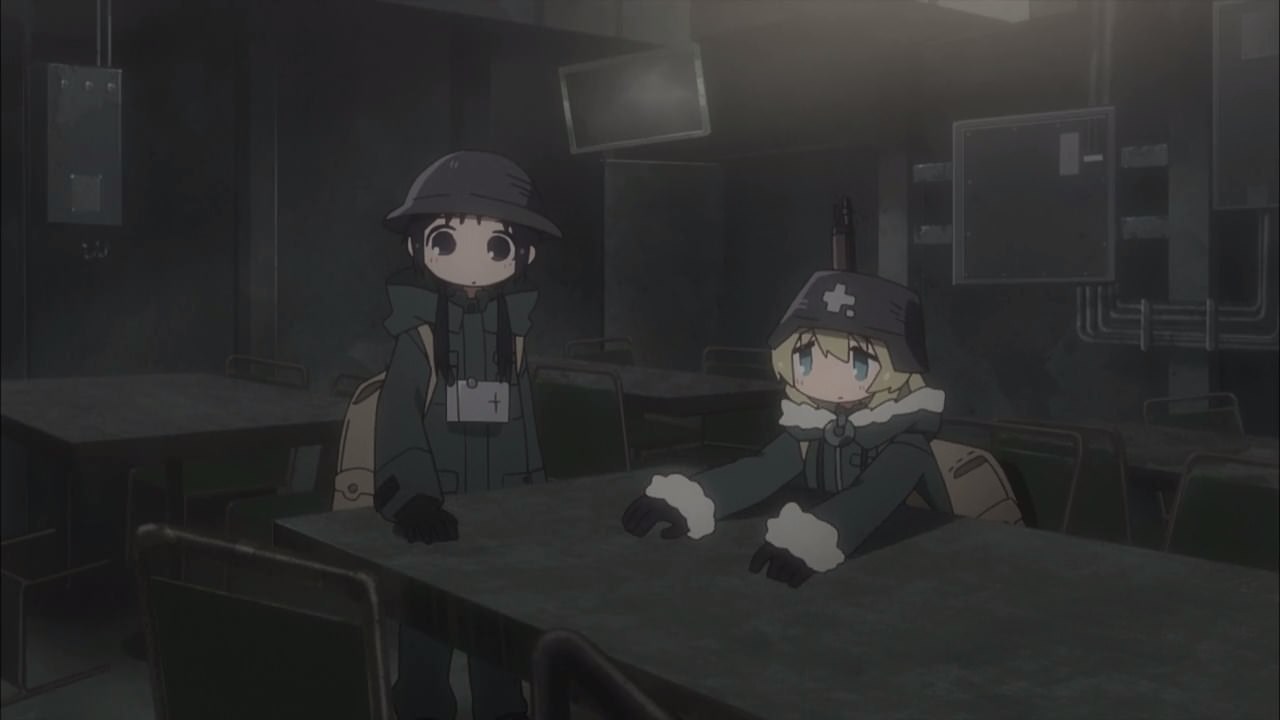 Hey everyone, it’s the finale of Girls’ Last Tour as both Chito and Yuuri are inside the nuclear submarine, which turned out to be operational and it still has those nuclear warheads inside of it, ready to blow up at any minute.

Anyways, let’s hope that they won’t encounter a terrible event on this episode! 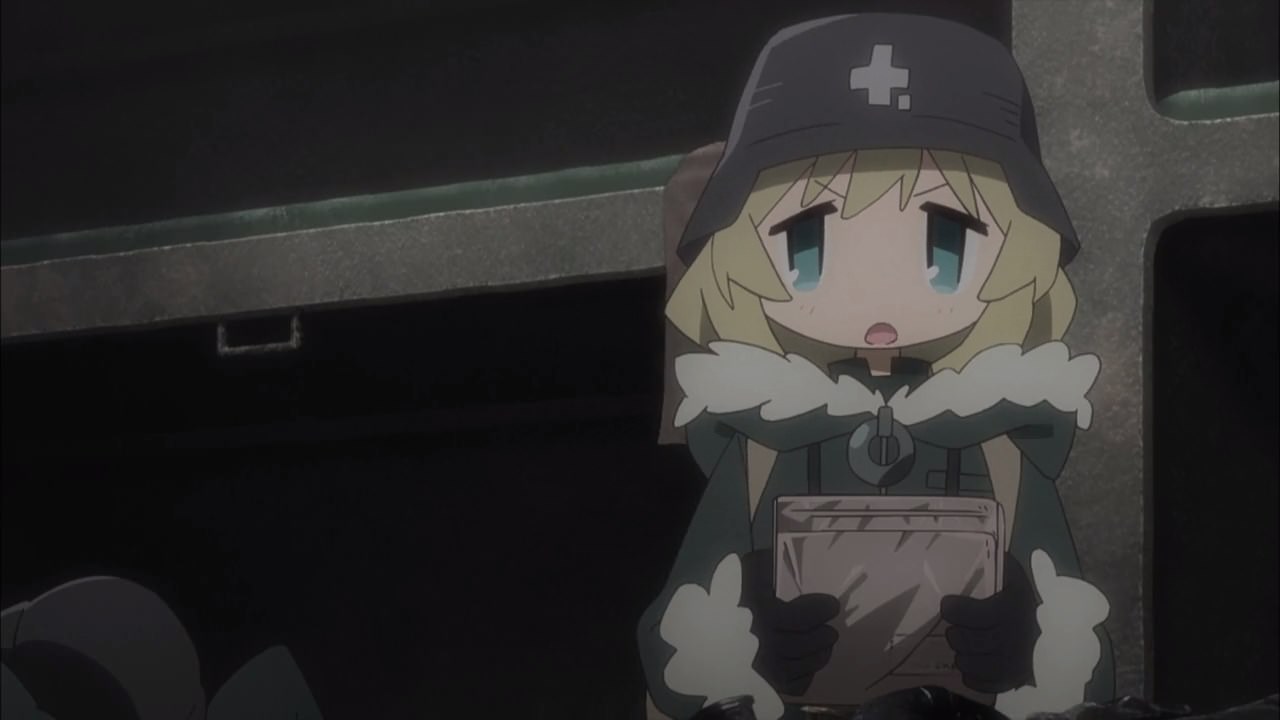 But first, time to find some grub to eat as Yuu found some chocolate-flavor rations. I mean, they’re hungry on exploring the sub so it’s the right time for these girls to have a break. 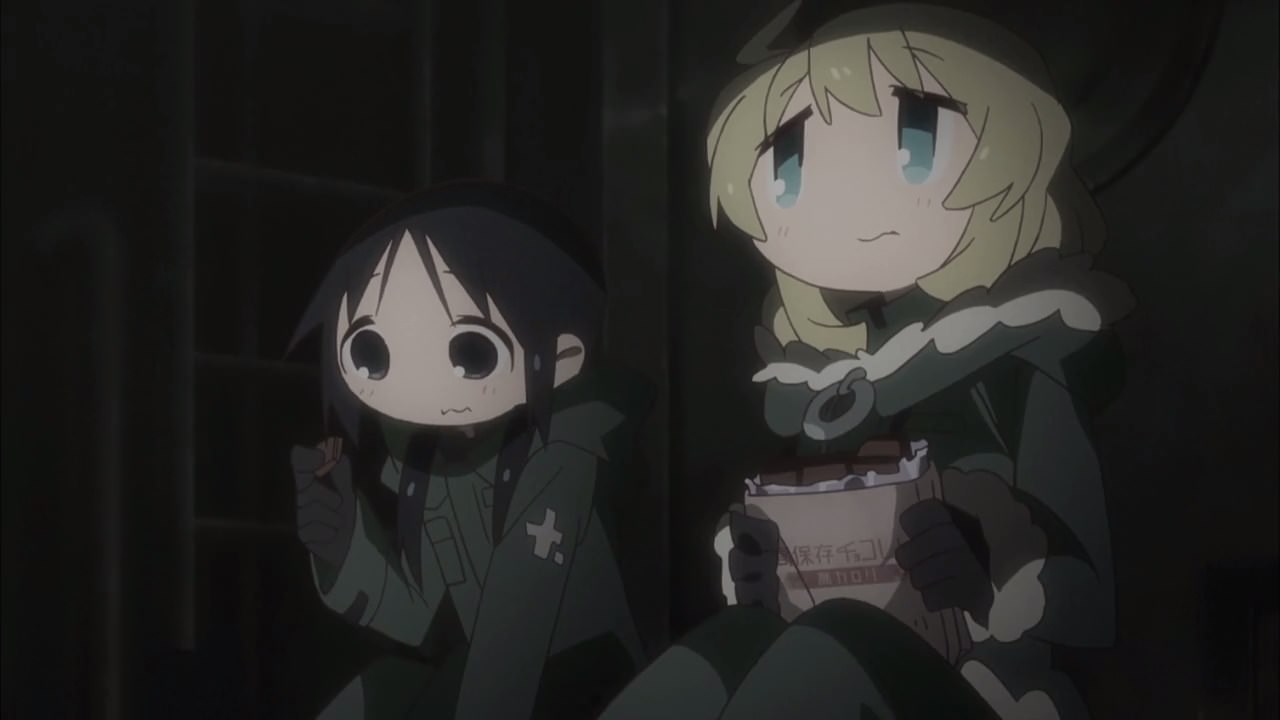 So yeah, both girls are taking a break and eating rations, which the chocolate flavor tastes good according to Yuuri.

Well, I have to say that it’s a good thing that the submarine is well-stacked when it comes to food. 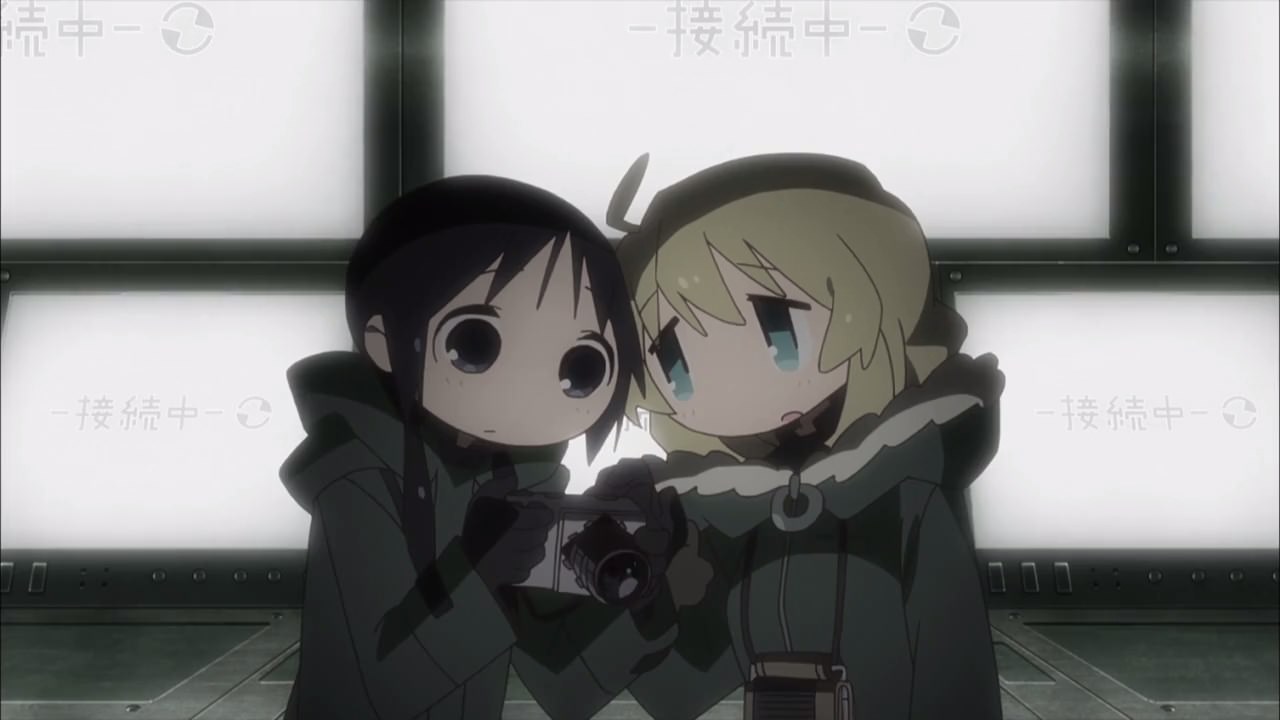 Meanwhile, it appears that their camera is acting weird as it’s trying to connect to the main computer of the submarine. 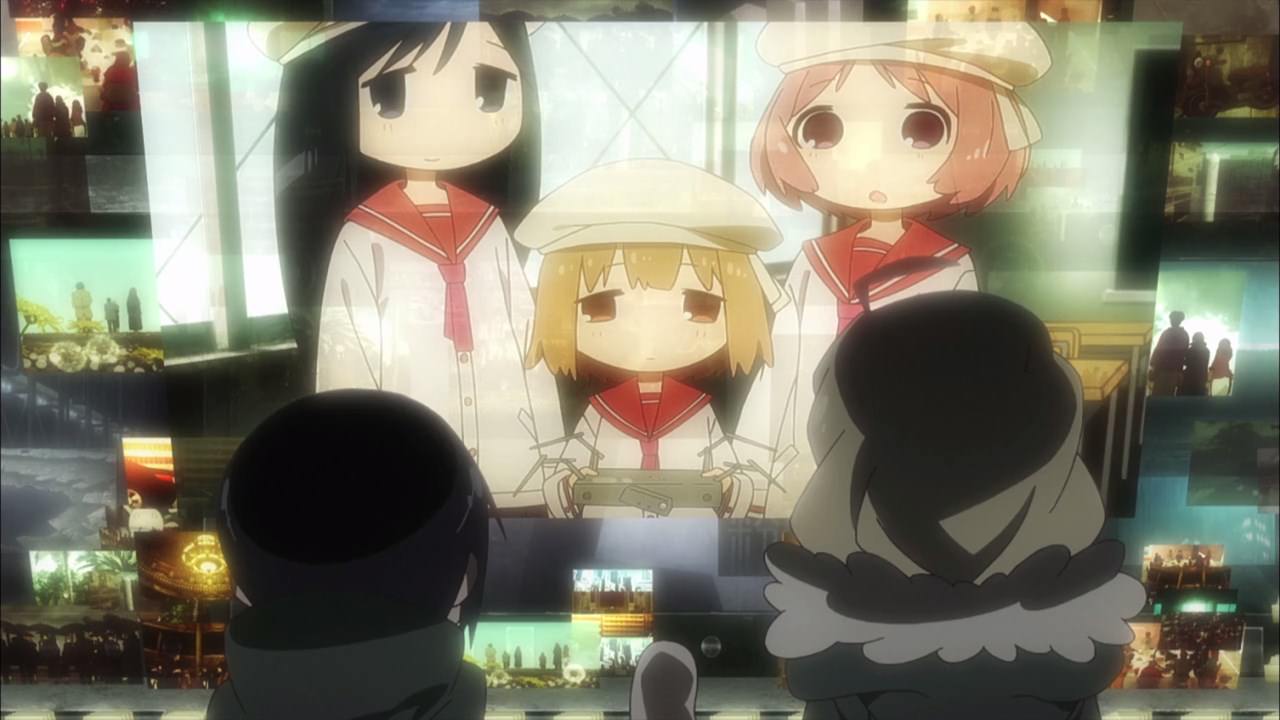 Once it’s connect, it not only shows the pictures of their travels, but also other pictures and even videos of various events throughout history.

Sure that it has snippets of various people living peacefully, but there are videos that shows the events leading up to another world war that killed most of humanity. On the other hand, there are also video blogs that shows girls creating artificial life. I wonder if that’s related to Nuko or even those robots from Episode 9? 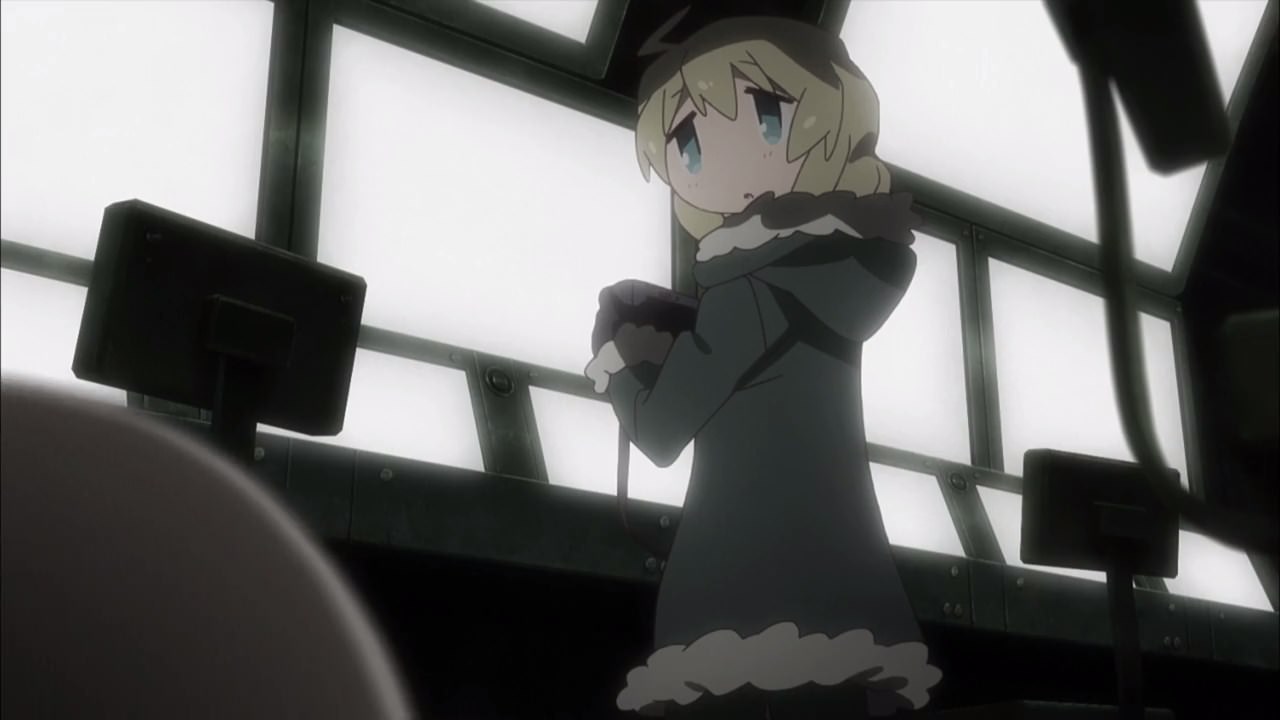 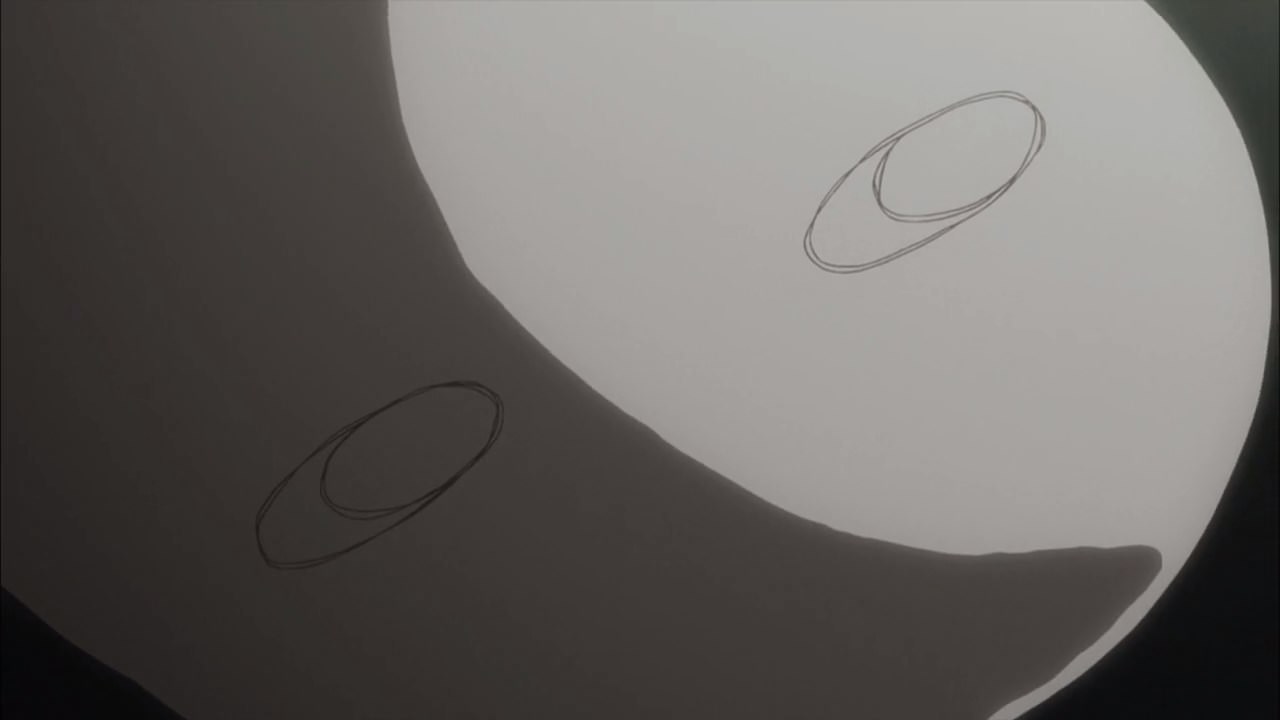 Speaking of Nuko, looks like Yuu encountered a big version of that strange creature. Then again, it doesn’t look like Nuko to be honest. 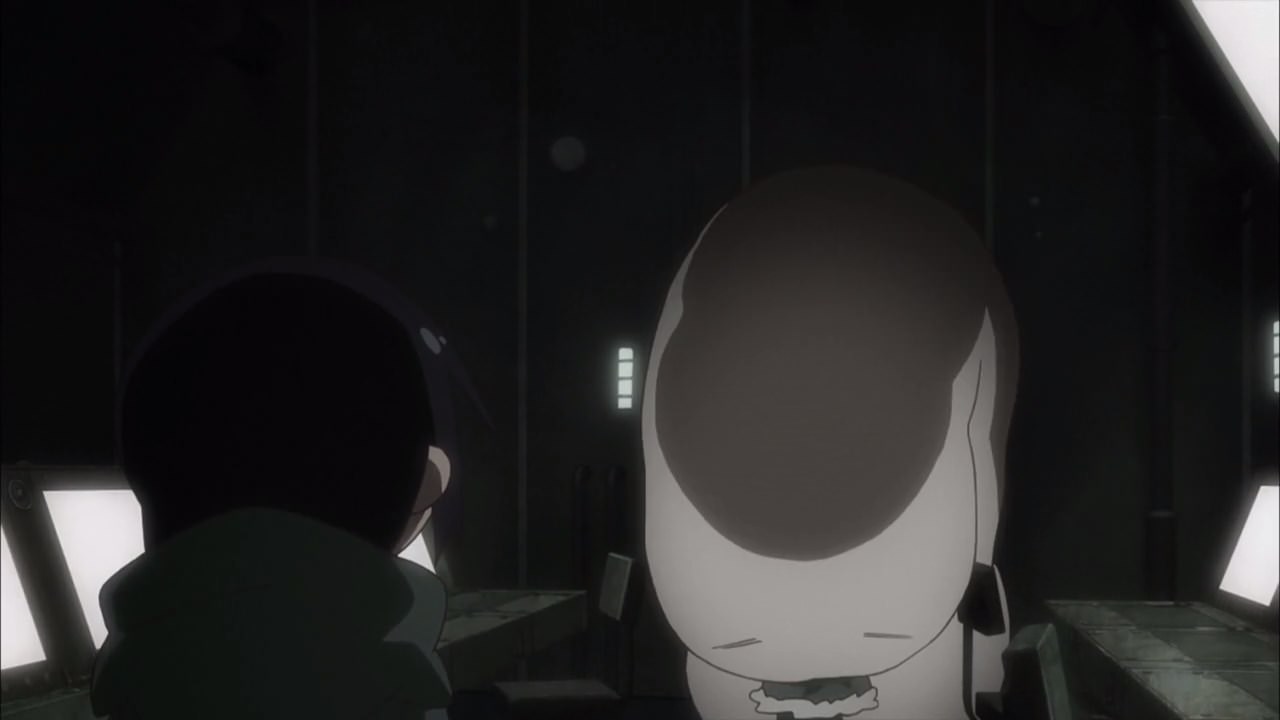 Worst of all, seems that this big creature has swallowed up Yuuri whole that Chito was stunned to see it. C’mon, Chi-chan would not survive without Yuu at her side! 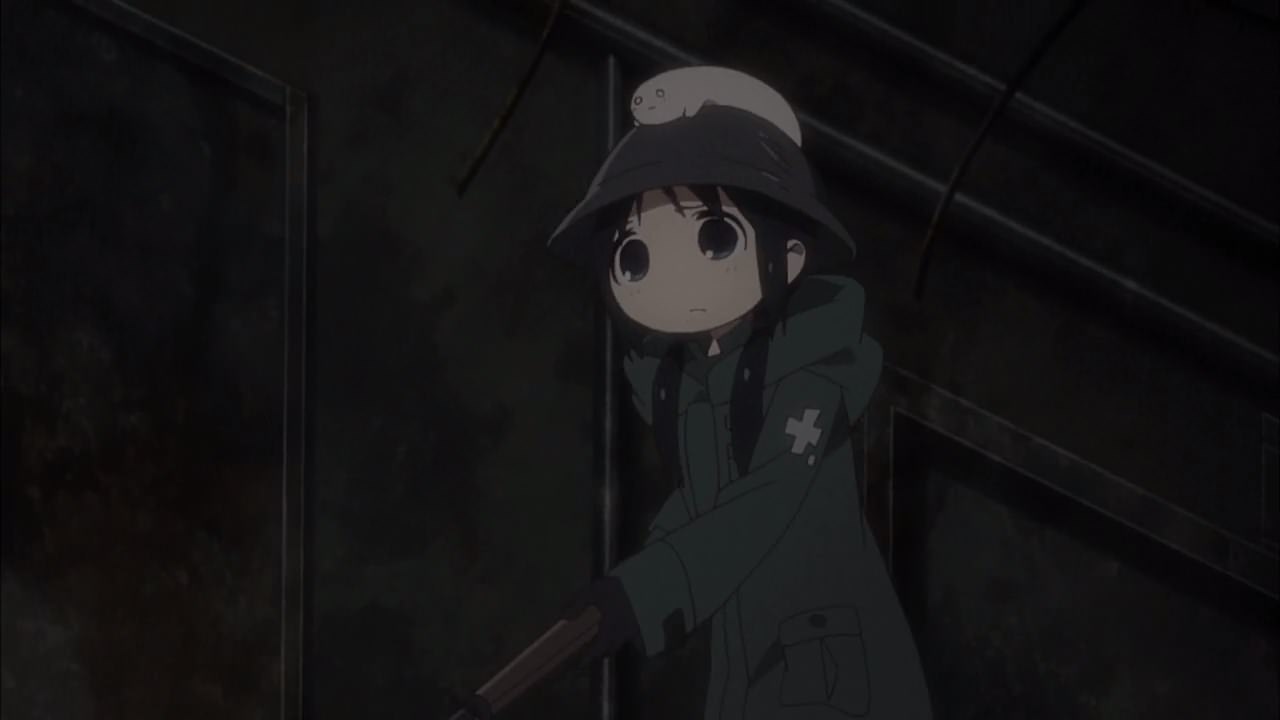 So, Chi-chan decided to rescue Yuu as she goes out to the surface with a rifle on her hand. Oh, and she’s joined by Nuko too, although this cat-like creature can’t talk without an electronic device. 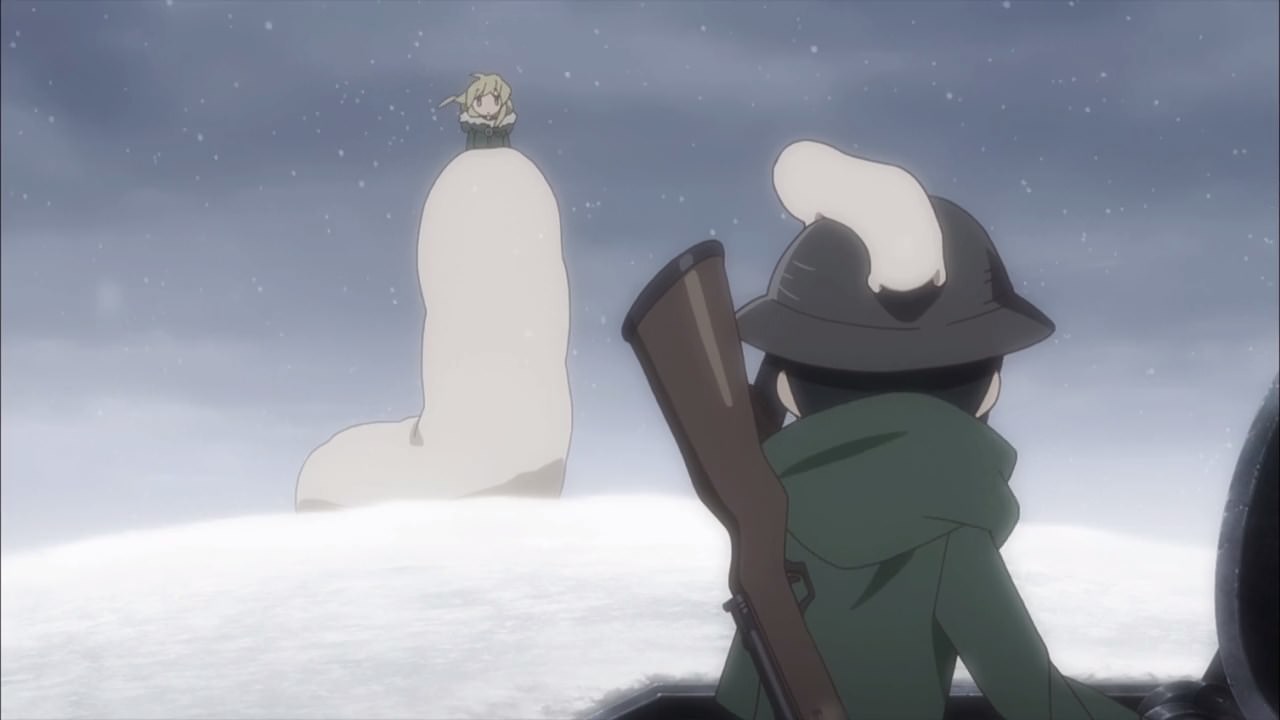 Eventually, Chi-chan found Yuu where she’s still gobbled up by this strange big creature. Fortunately, Yuuri was not completely swallowed up as she’s still alive. 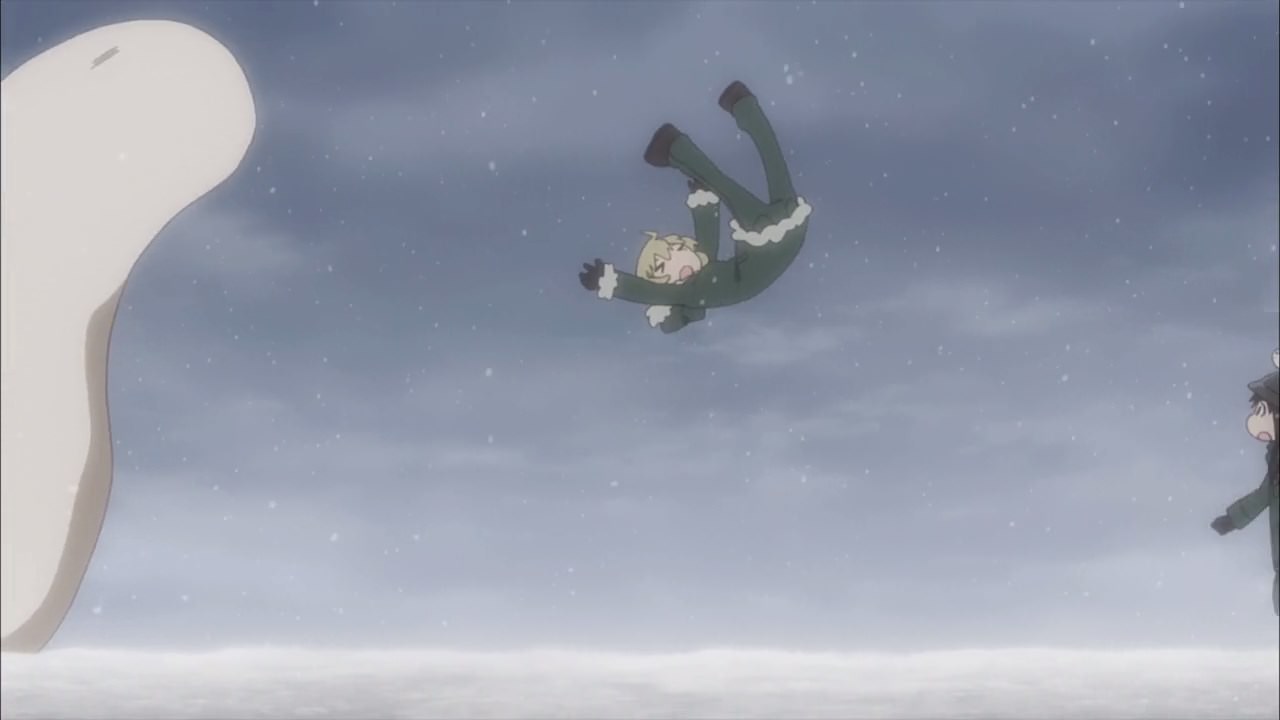 Oh, and that creature spit Yuu as she doesn’t taste good enough. Yeah, what I said was a joke, but at least Chito felt relieved that Yuuri is okay! 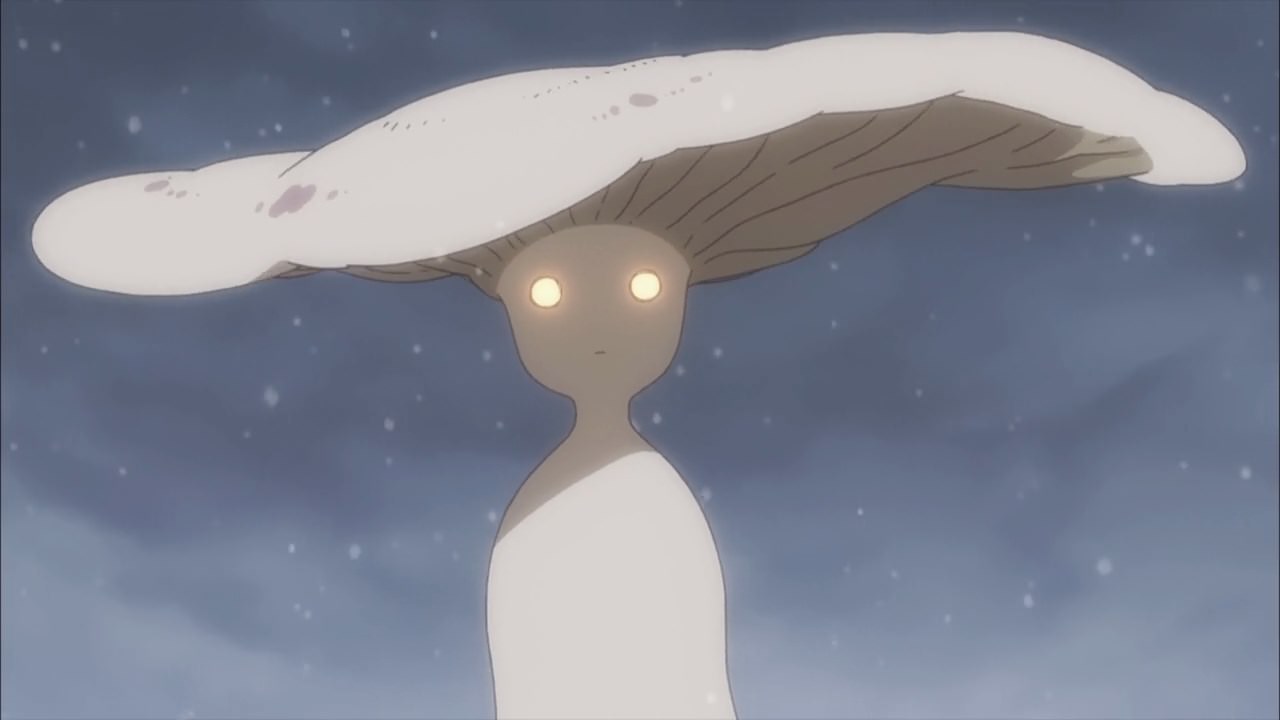 As for those strange creatures? Well, they changed their appearance into a mushroom-like alien where they explained that they came to Earth to eat anything that’s electronic, ranging from radios to cameras.

Speaking of cameras, this alien already ate Chito and Yuuri’s camera, which I’m disappointed because I want to see more of the world before the war broke out. 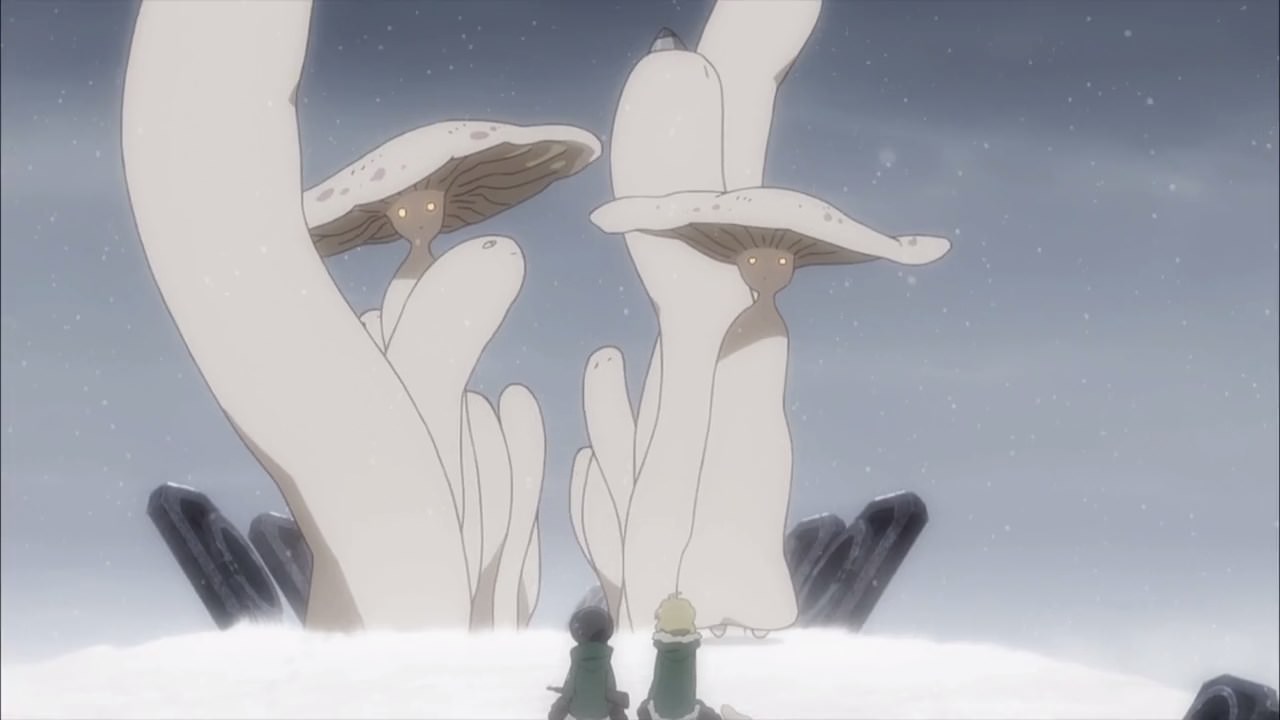 On the other hand, the mushroom aliens told both Chito and Yuuri that they’re the only humans left on this world. Wait, so that means that both Kanazawa and Ishii are dead? 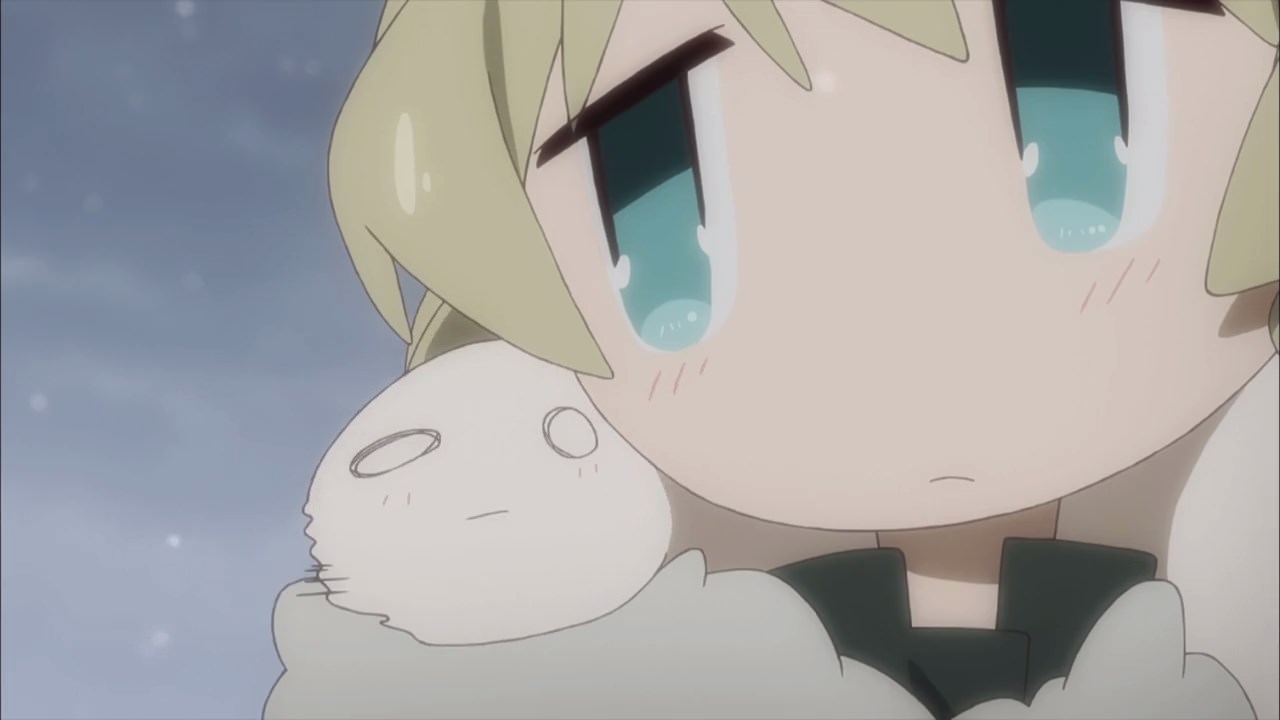 Speaking of Nuko, this creature is very hesitant on going back home along with the mushroom aliens.

But eventually, Nuko decided to return to the mushroom aliens as it says goodbye to both Chito and Yuuri. 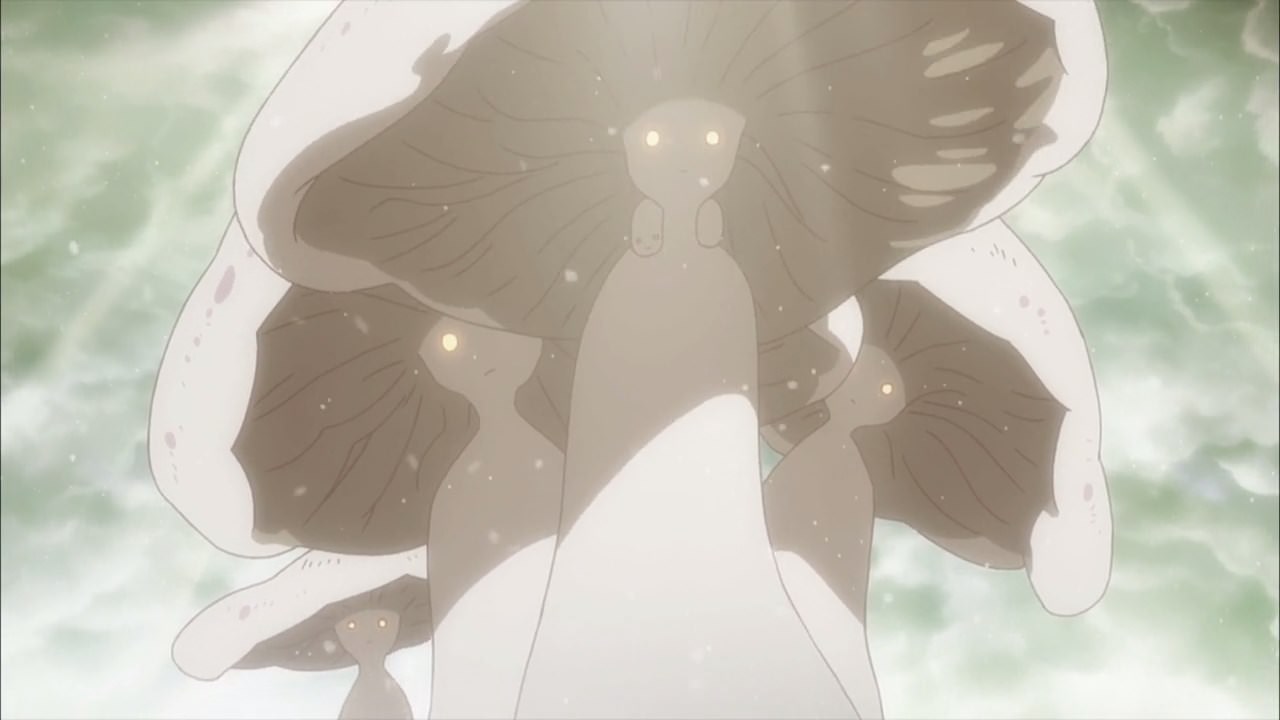 And so, Nuko went back to its fellow kind as the mushroom aliens are ready to depart to a higher place. 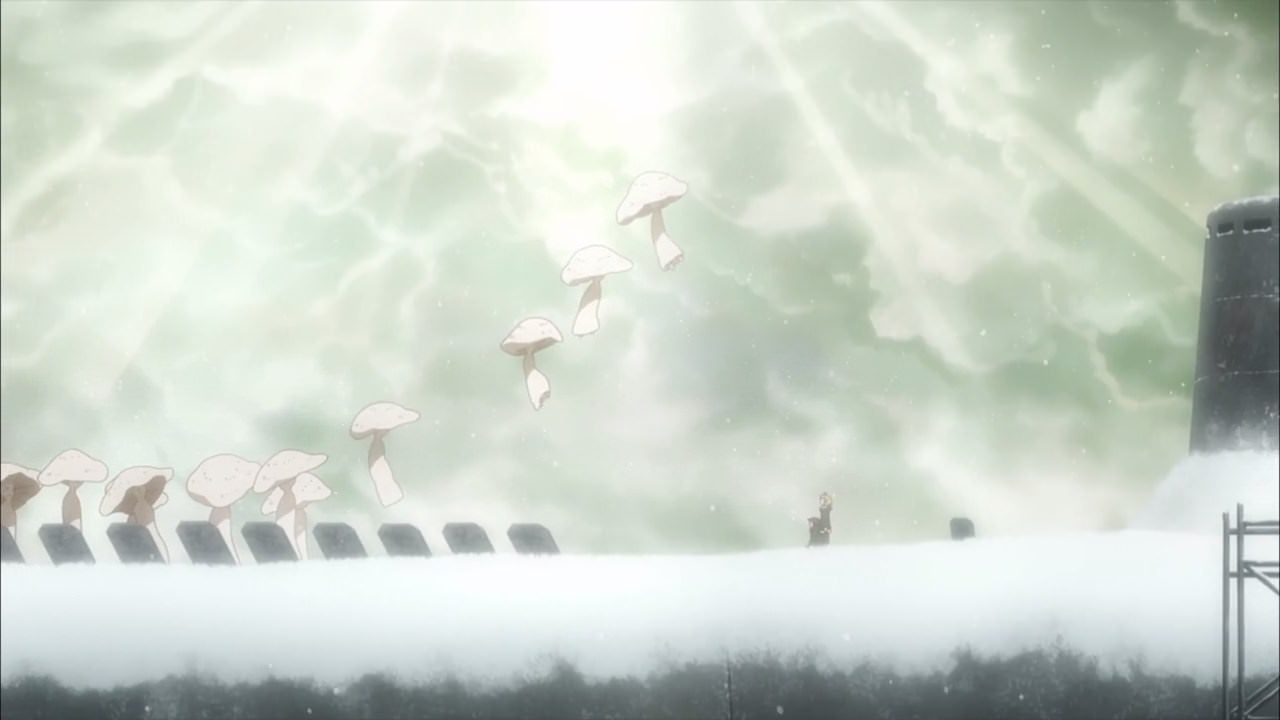 And while we’re at it, they also told Chi-chan and Yuu that Earth will be in a deep slumber once all weapons are devoured by them and take their hibernation.

I have to say that the existence of extra-terrestrials on this show is mind-blowing. Better yet, their basic form is similar to those strange statues that Chito and Yuuri encountered in Episode 4, so it seems that these aliens are being worshipped as gods even after most of humanity has gone extinct.

Still, if the revelation that both Chi-chan and Yuu are the only living beings are true, then I’m saddened that they’ll never encounter living humans anymore. But then again, both girls will continue to travel no matter what the circumstances. 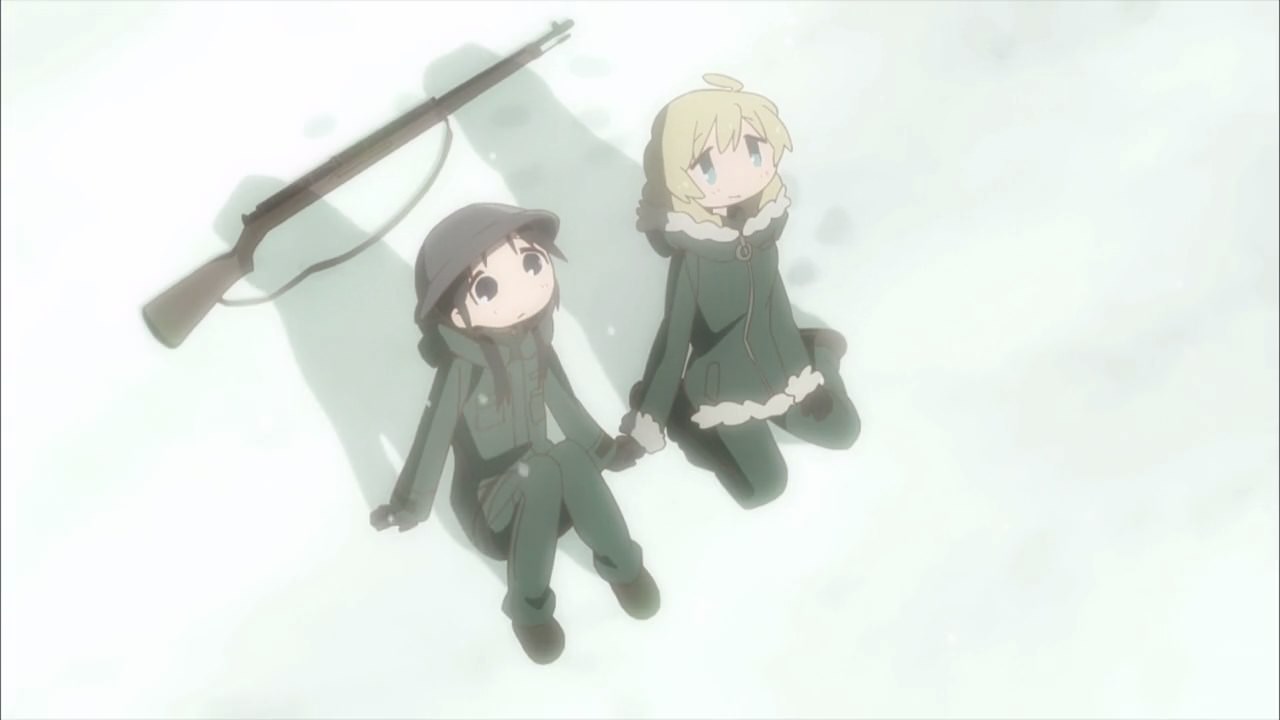 Anyways, that’s the end of Girls’ Last Tour and it was a fascinating series to watch. I must say that WHITE FOX did a great job of capturing the atmosphere of the post-apocalyptic world, all while seeing the daily lives of both girls surviving the world in a non-depressive tone. After all, this series is treated as a slice-of-life anime and I’m okay about it.

Oh by the way, I forgot to mention that I’m glad both Chito and Yuuri survived at the end of this series, which it would be a bummer if it didn’t. Of course, the manga is still ongoing so it seems that there would be more stories ready to be adopted by WHITE FOX in the future. Then again, I feel that I’m satisfied with the ending of Girls’ Last Tour.

In any case, it’s time to say goodbye to both Yuu and Chi-chan as their journey continues!