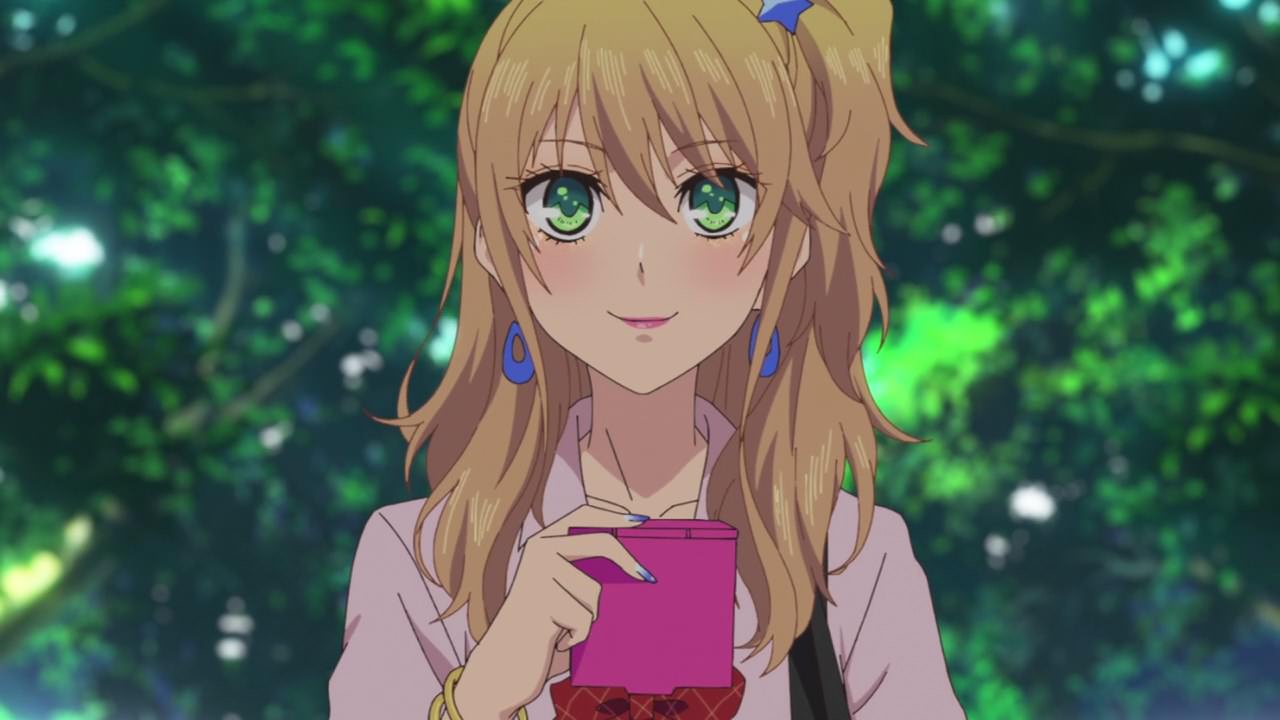 Hey guys, it’s time for some yuri anime and I’m hoping that it’s better than the disaster that is Netsuzou TRap.

Anyways, this is Yuzu as she’s recently transferred to another school due to her mother’s remarriage. As you can see, Yuzu is your typical gal character who wants to find another boyfriend and brag about it. 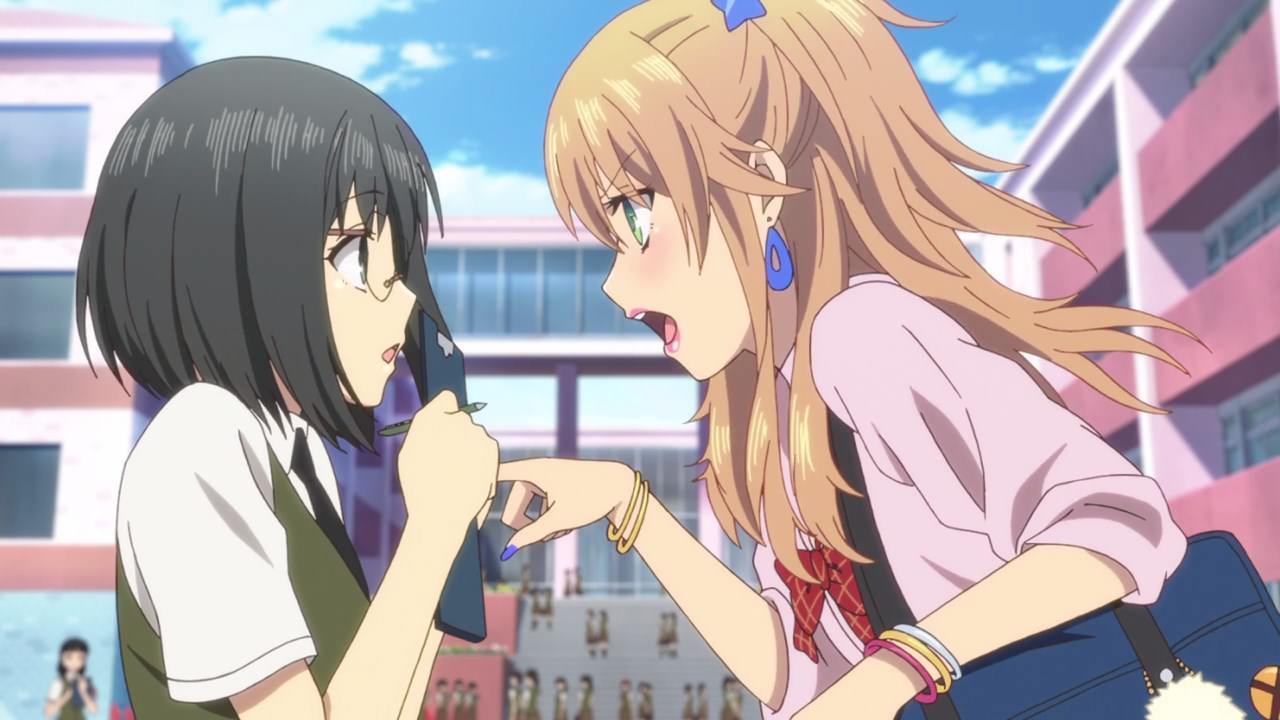 Unfortunately, the school she’s attending to is very strict when it comes to uniforms and proper behavior.

Here, Yuzu is arguing towards to disciplinary council as she told them that she started attending the school and she doesn’t know the rules. 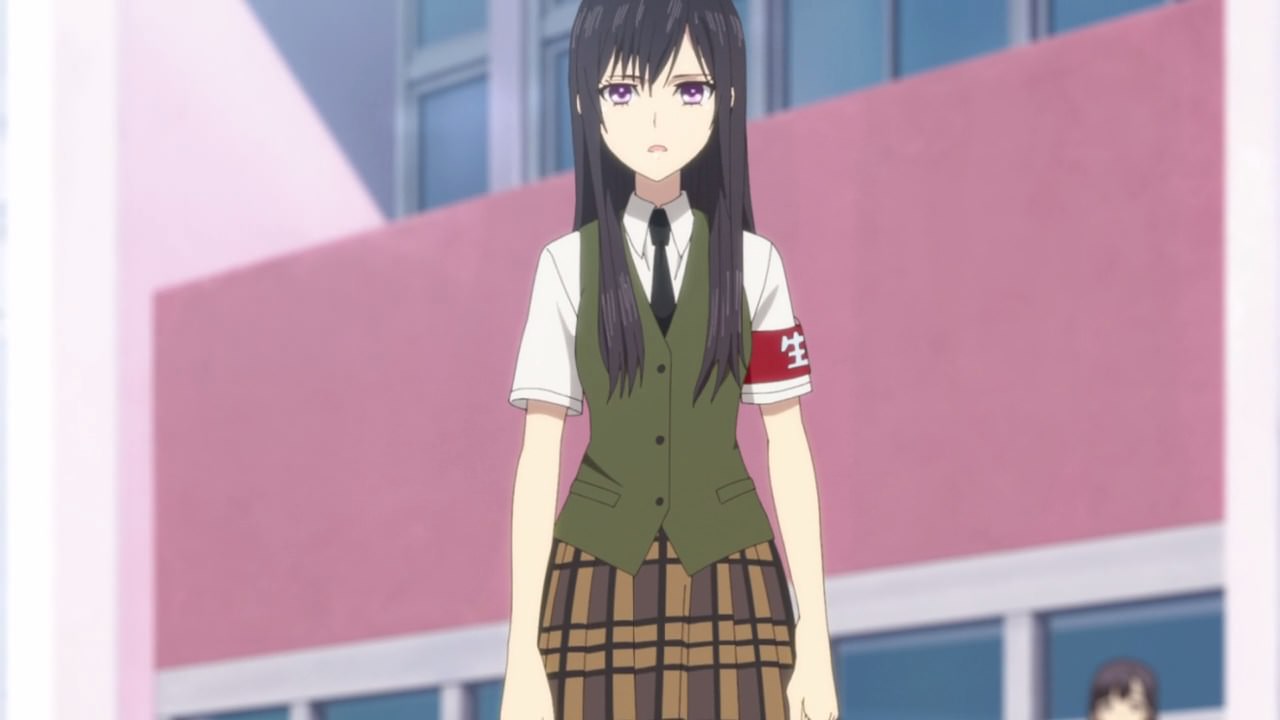 Suddenly, a girl named Mei has arrived to defuse the situation as it turns out that she’s actually the student council president, and the granddaughter of the school chairwoman.

Yeah, Mei has authority and she’ll punish anyone who’s breaking the rules! 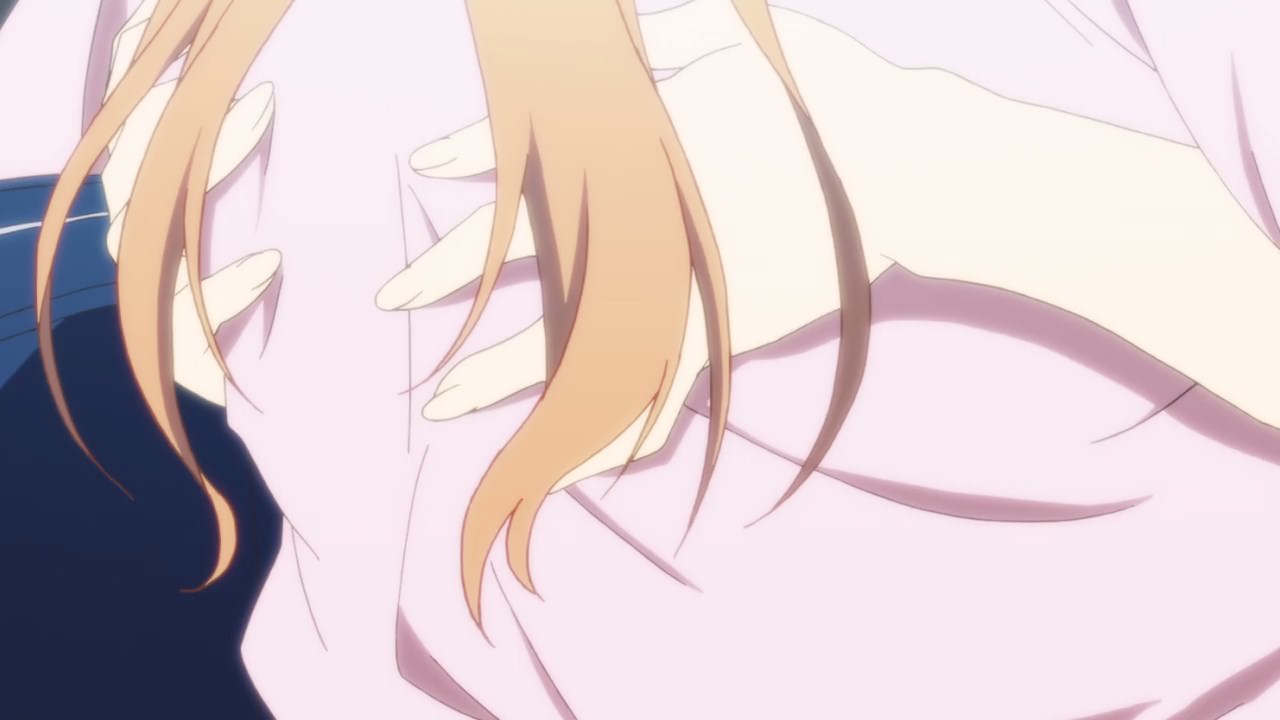 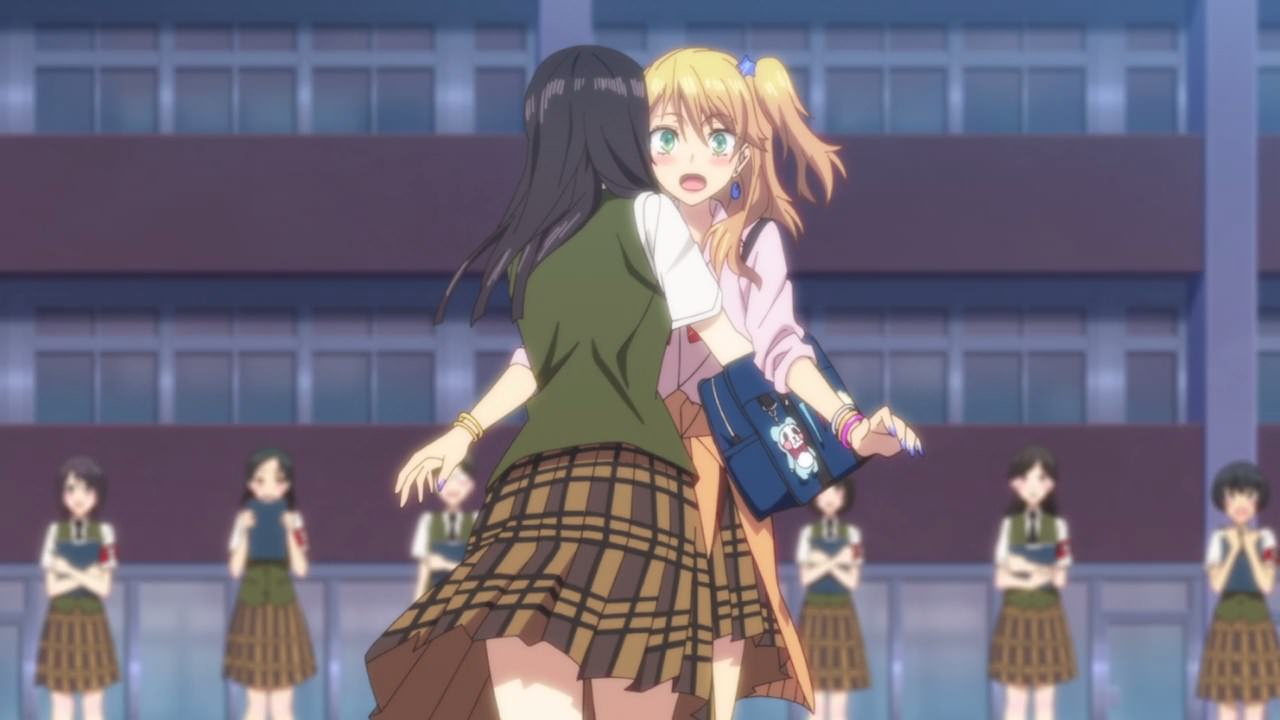 This includes Yuzu as she’s being caressed by Mei extensively… and inside the school campus of all places. Wow, that was lewd! 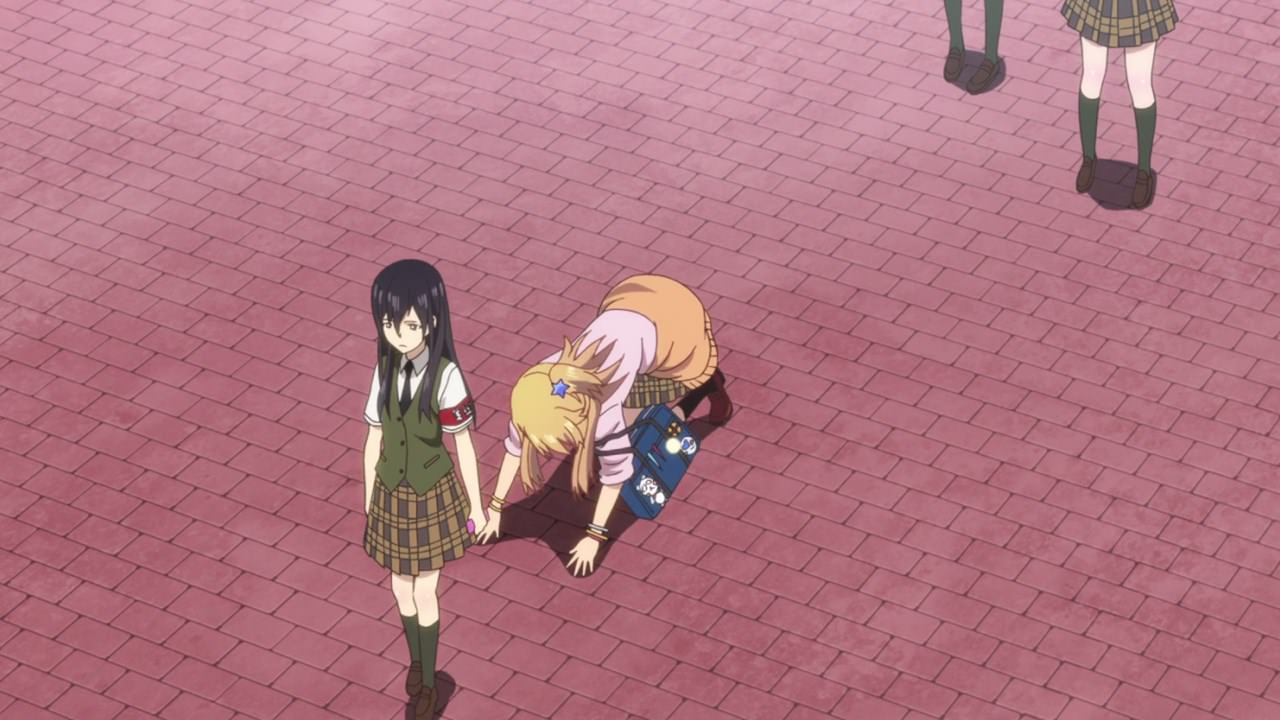 In any case, looks like Yuzu fell down as her energy was sapped by Mei’s gentle hands. 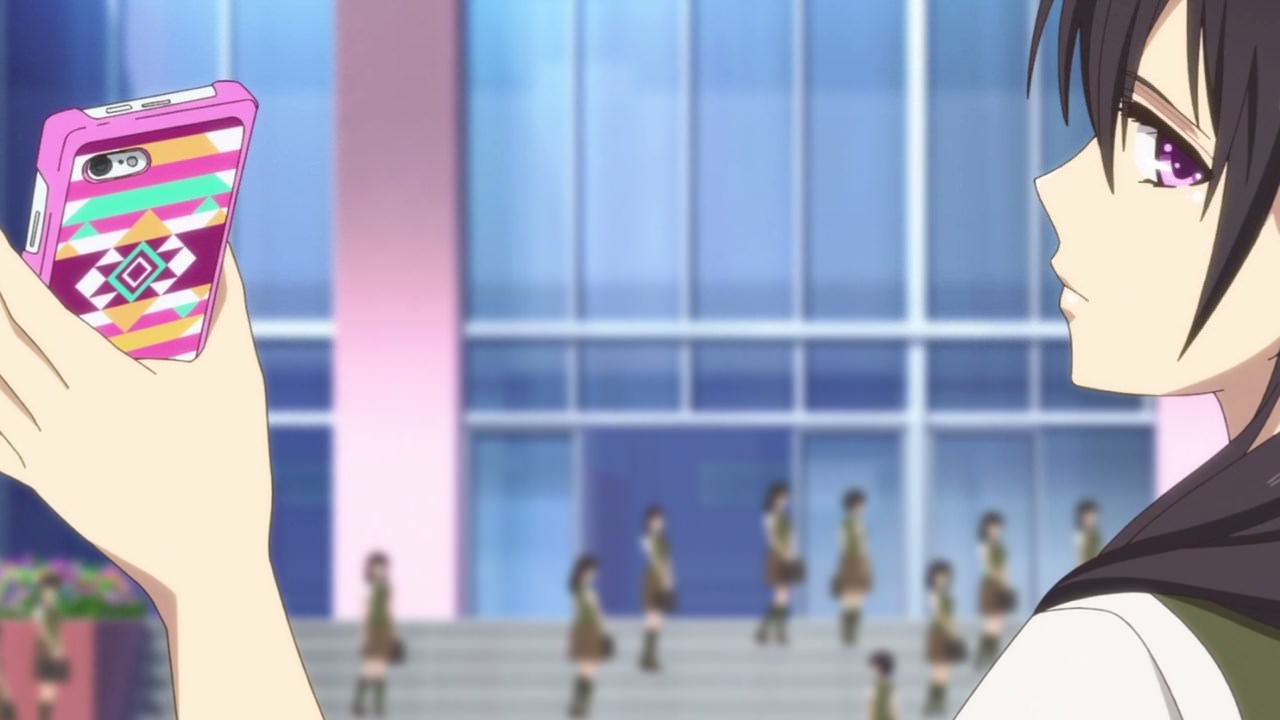 Also, Mei confiscated her cellphone because it’s also prohibited to bring one to an all-girls school.

In any case, Yuzu’s first day is not looking so well as she broken so many rules. 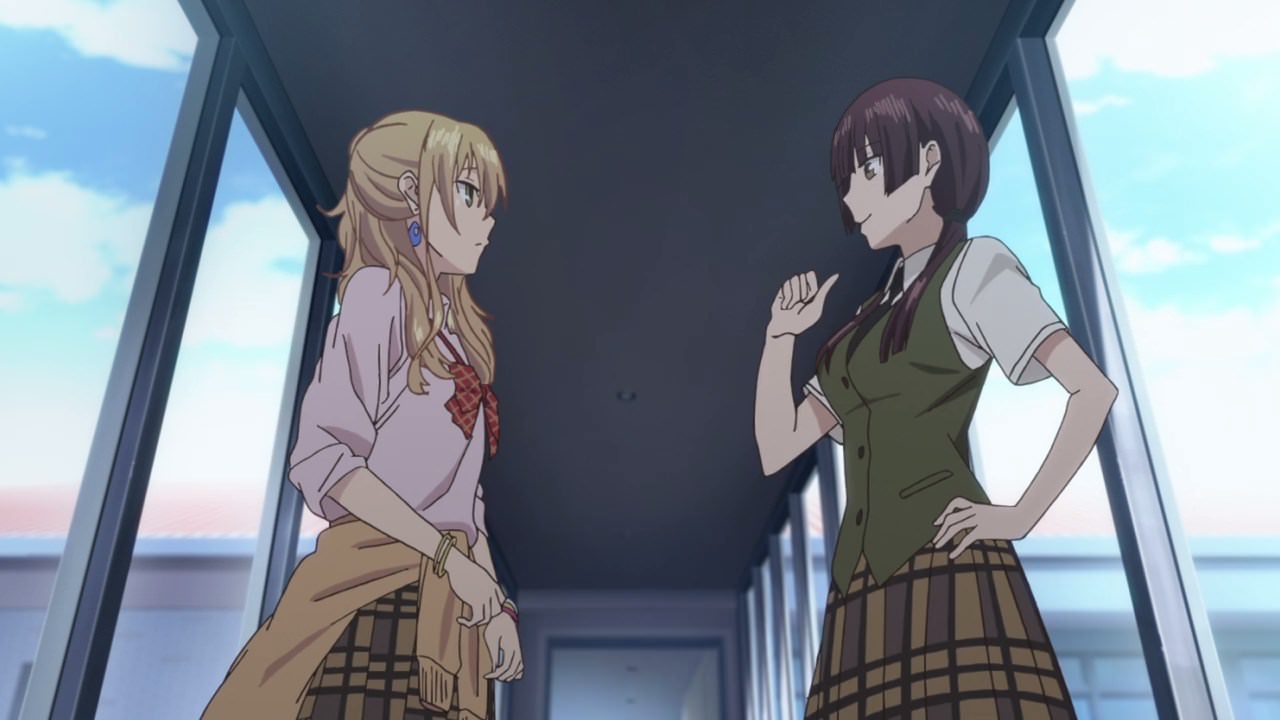 Heck, she was told by Harumi Taniguchi that this school is very strict. So much that Harumi can’t act like a gyaru most of the time.

By the way, this is Yuzu’s first friend upon attending this school. But yeah, she needs to be careful from now on. 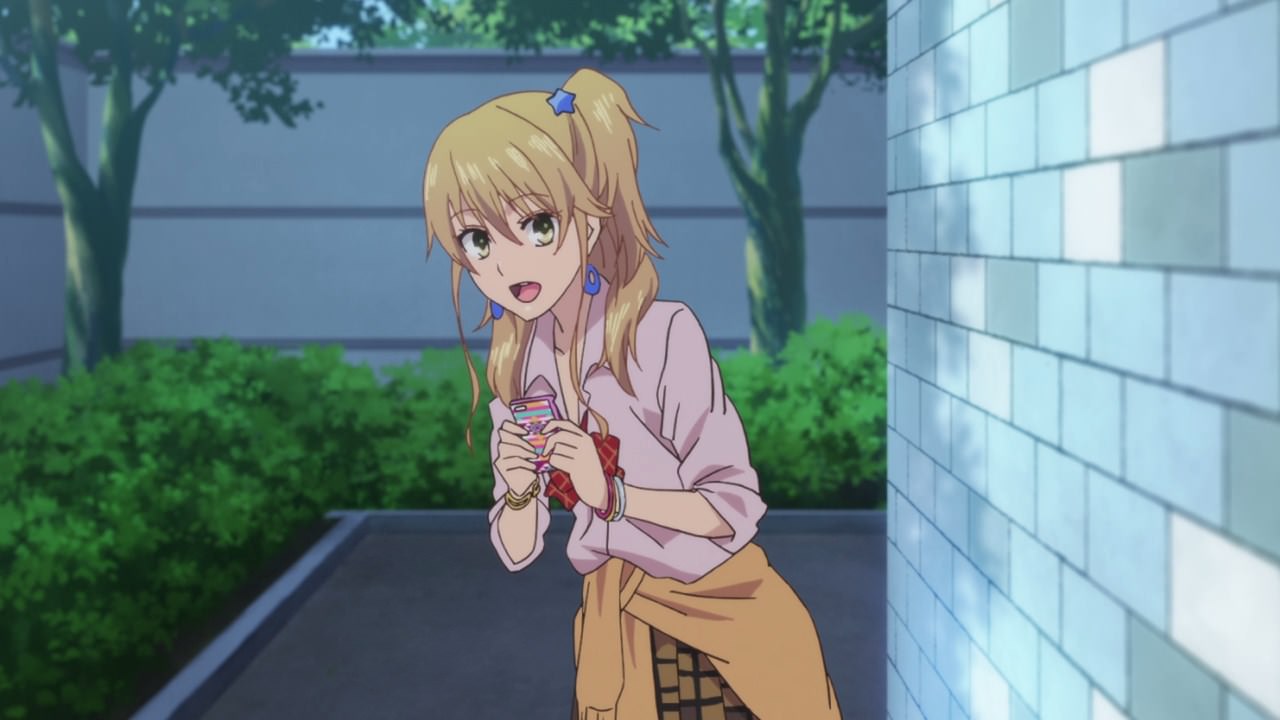 On the other hand, seems that Yuzu found something that shocked her… 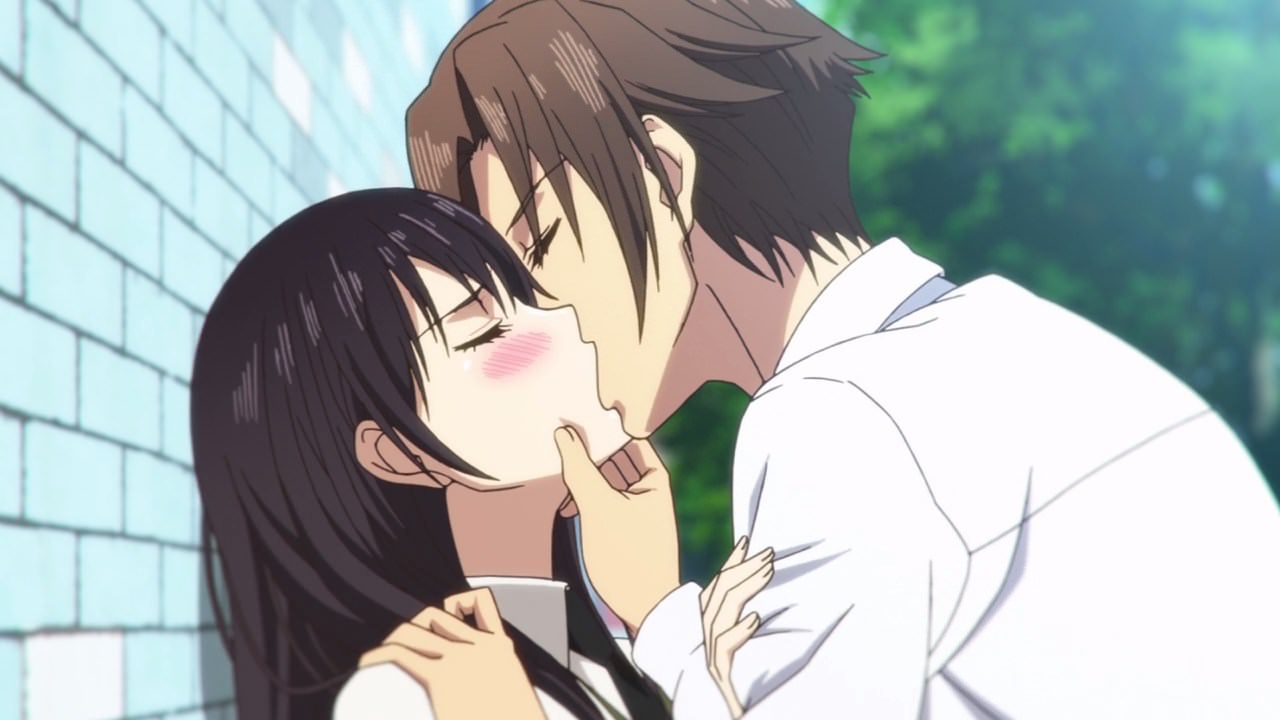 Turns out that Mei is kissing a teacher named Amamiya. Well, I have to say that it’s forbidden to have a relationship between a student and a teacher, but Mei doesn’t mind that because she’s the granddaughter of the school’s chairwoman!

Of course, there’s more to come after school as Yuzu will meet her new step-father. 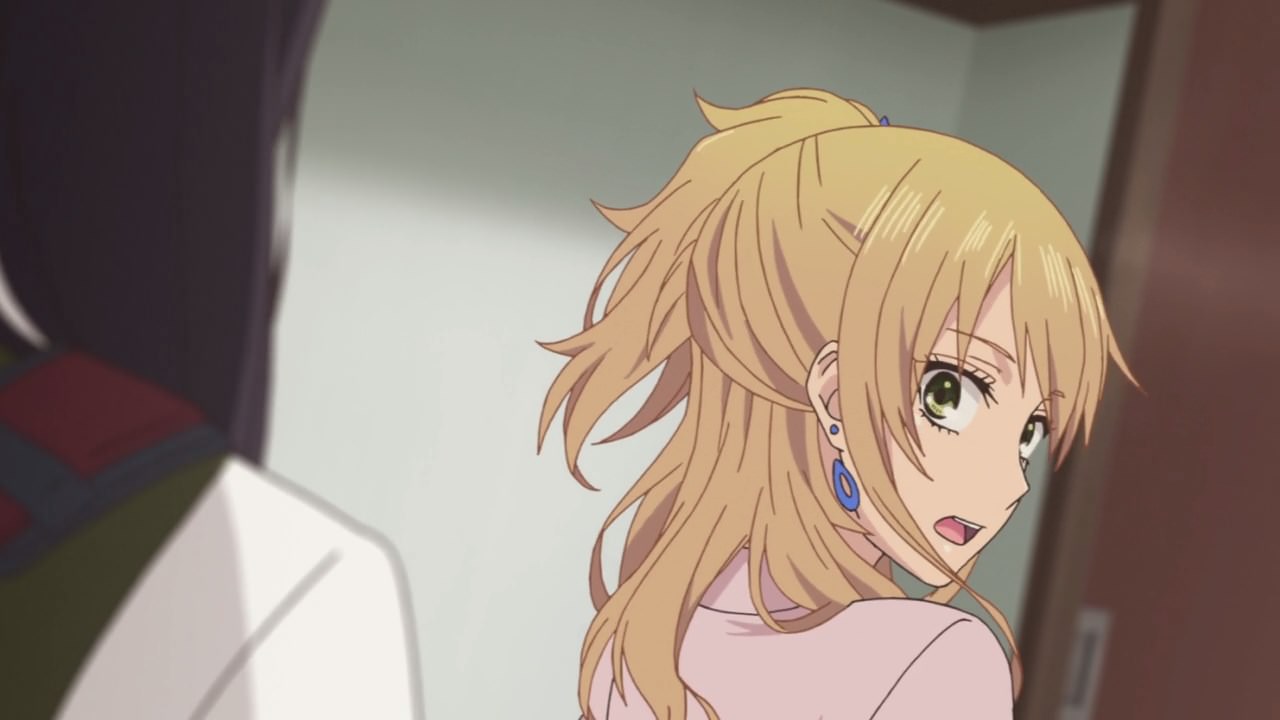 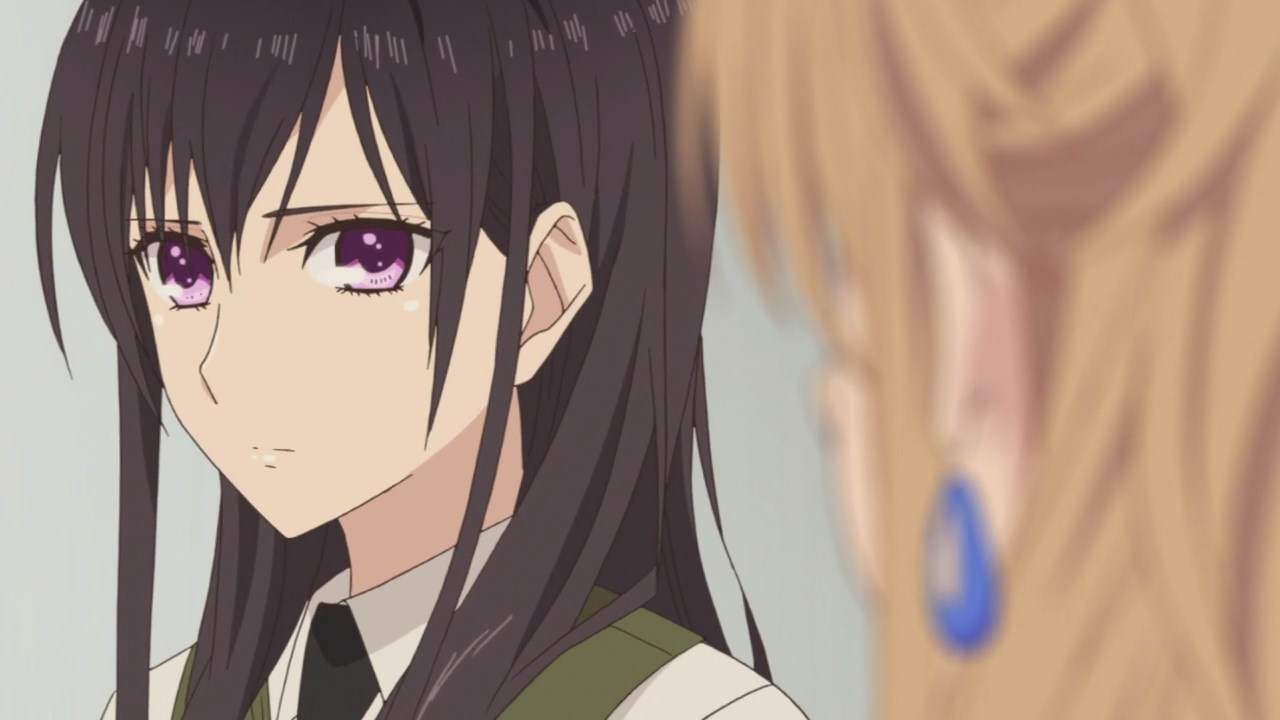 Unfortunately, what she got was Mei who turned out to be Yuzu’s new step-sister. Well, I have a feeling that there would be a sister rivalry brewing up on this series! 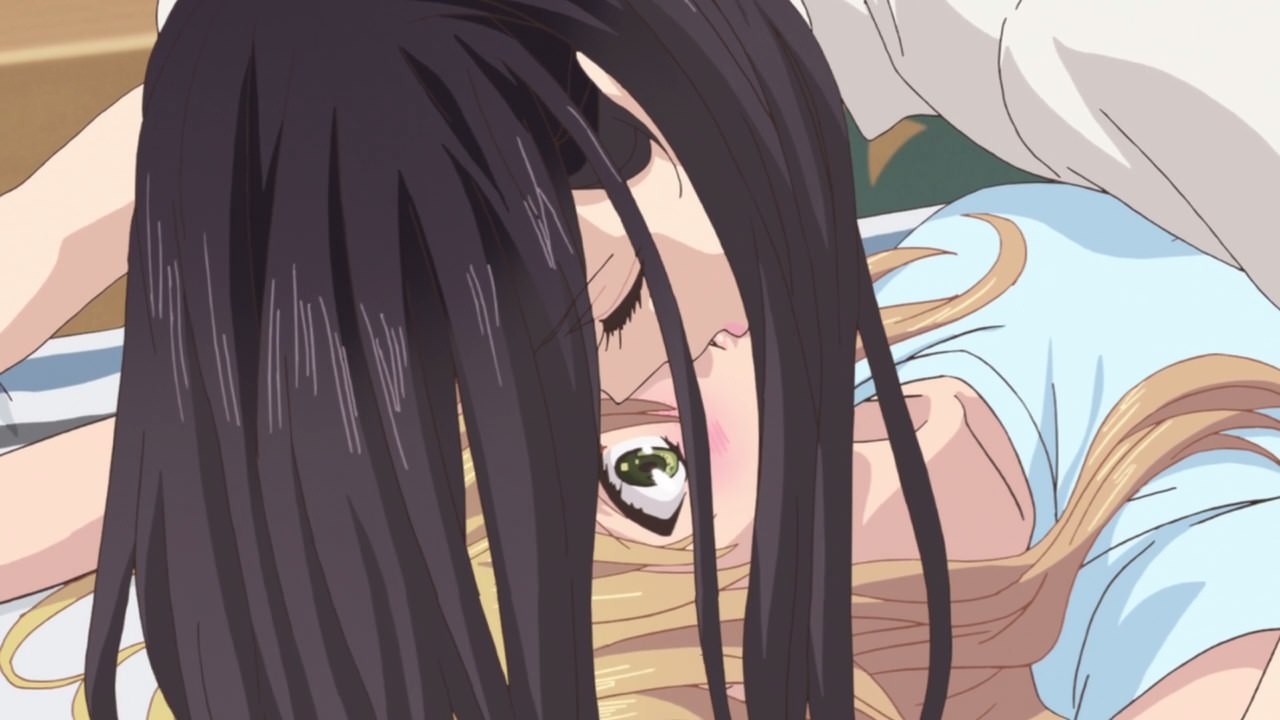 But then again, I was wrong as Mei stole Yuzu’s kiss at the end of this first episode. Oh boy, seems that Mei wants to do yuri things towards Yuzu!

In any case, what an interesting first episode of citrus and while I’m surprised with Mei kissing both her teacher and Yuzu, I feel that it’s gonna be downhill from there. But you know what, I’m hoping that citrus won’t turn into a trainwreck on future episodes.