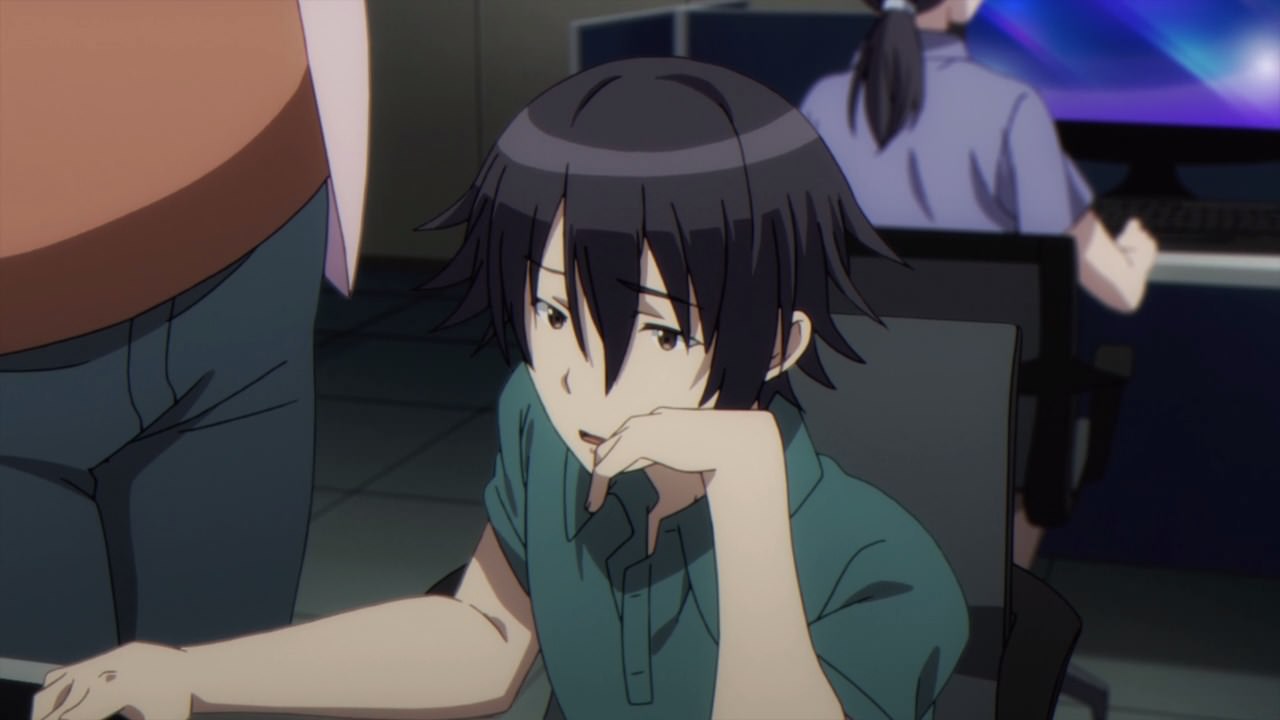 Hello everyone, I’m here to tell you about the dangers of overwork as you have 29-year old Ichiro Suzuki (not to be related to the famous baseball player) fixing bugs of both games… for three straight days without stepping out of the office.

Oh, and he haven’t taken a bath nor took a good night sleep too, which are signs that Ichiro-san’s body is pretty much affected badly due to overwork. 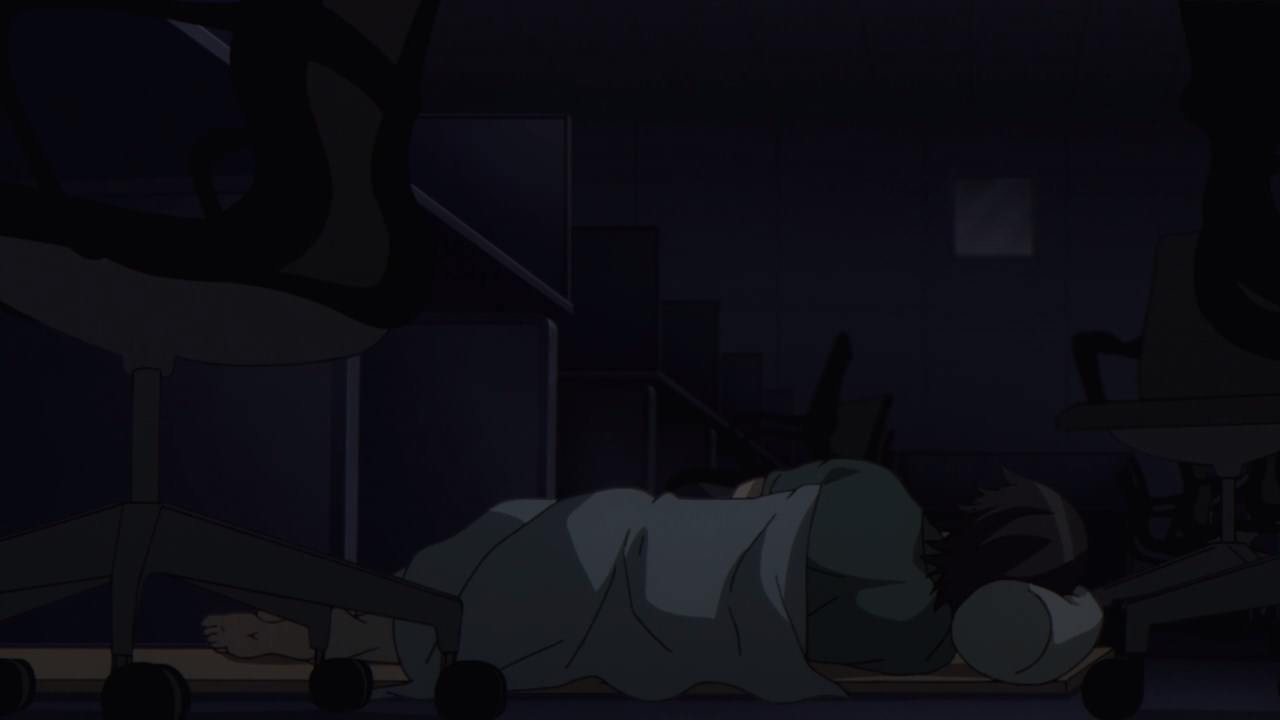 And after three days of working non-stop, Suzuki took a long nap after fixing most of the major bugs in both Freedom Fantasy and War World.

But then again, I’m worried that he might not wake up again… Seriously, overworking is bad! 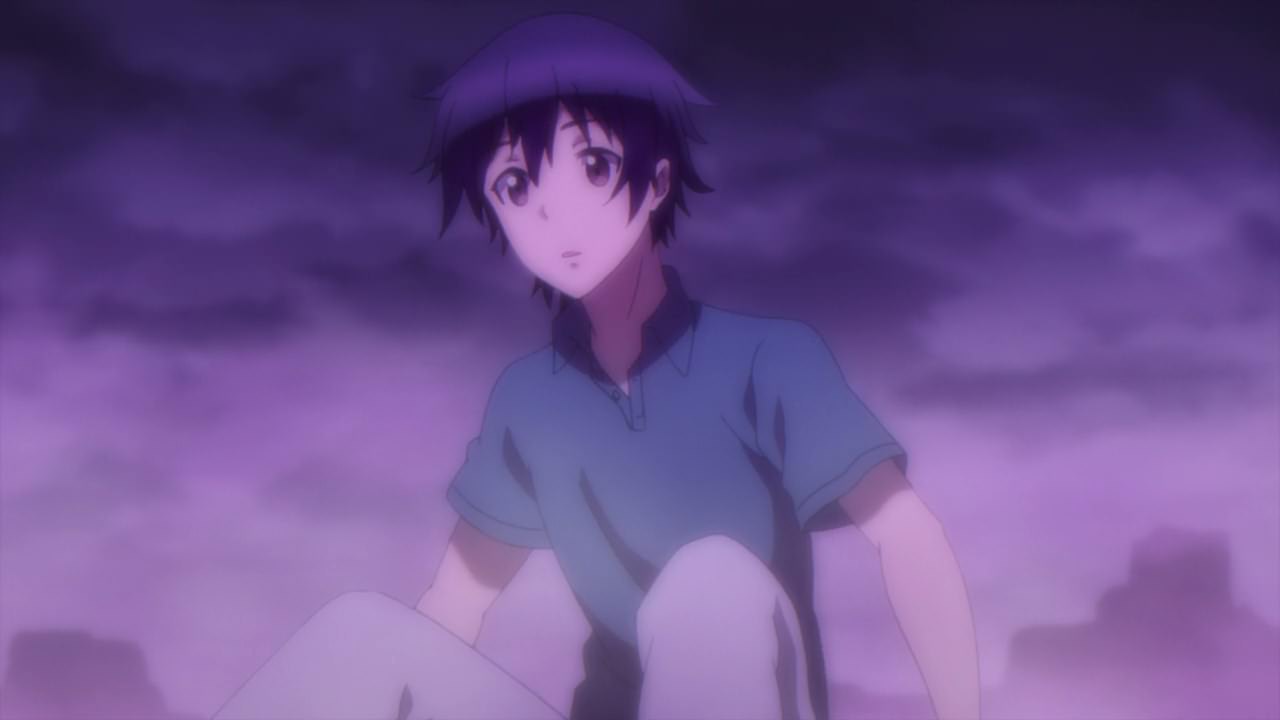 The next scene followed up with Ichiro Suzuki waking up to a strange world. Oh, and his appearance has changed too. 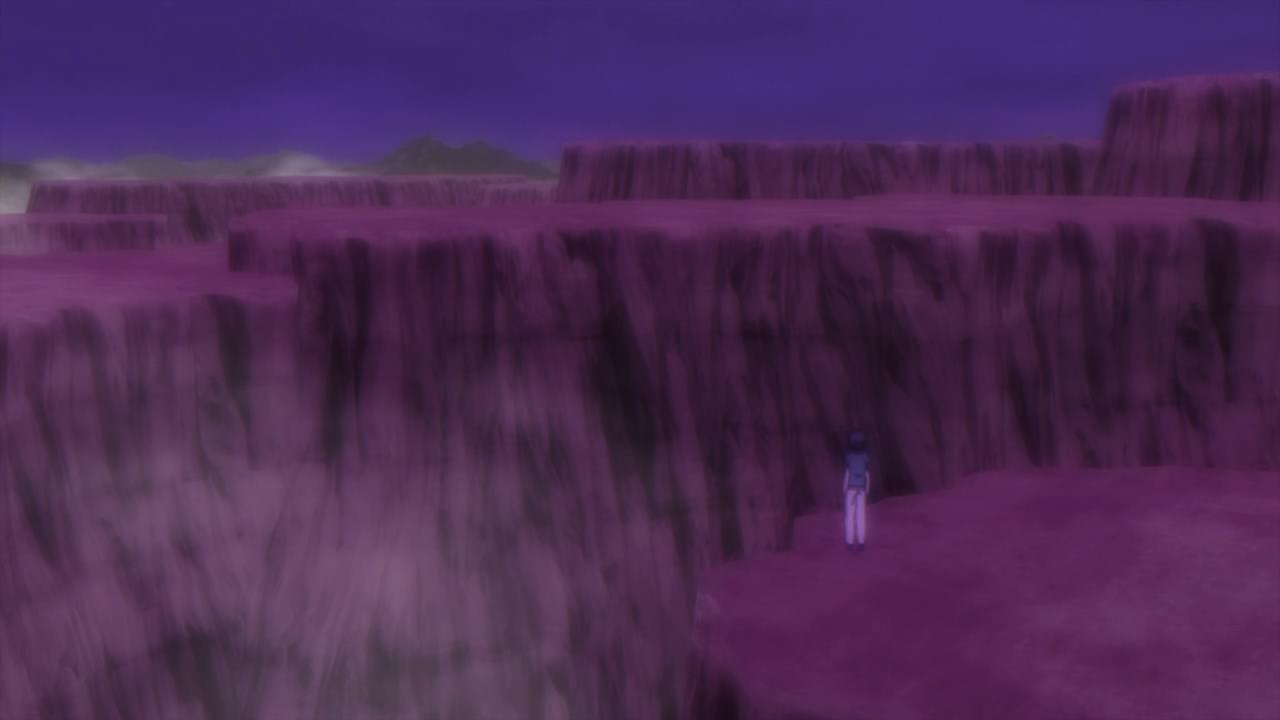 In any case, looks like Ichiro-san fell into a dream world that he may never wake up again. On the other hand, this world looks like a game as seen with this appearance of a status screen, strangely enough for this world. 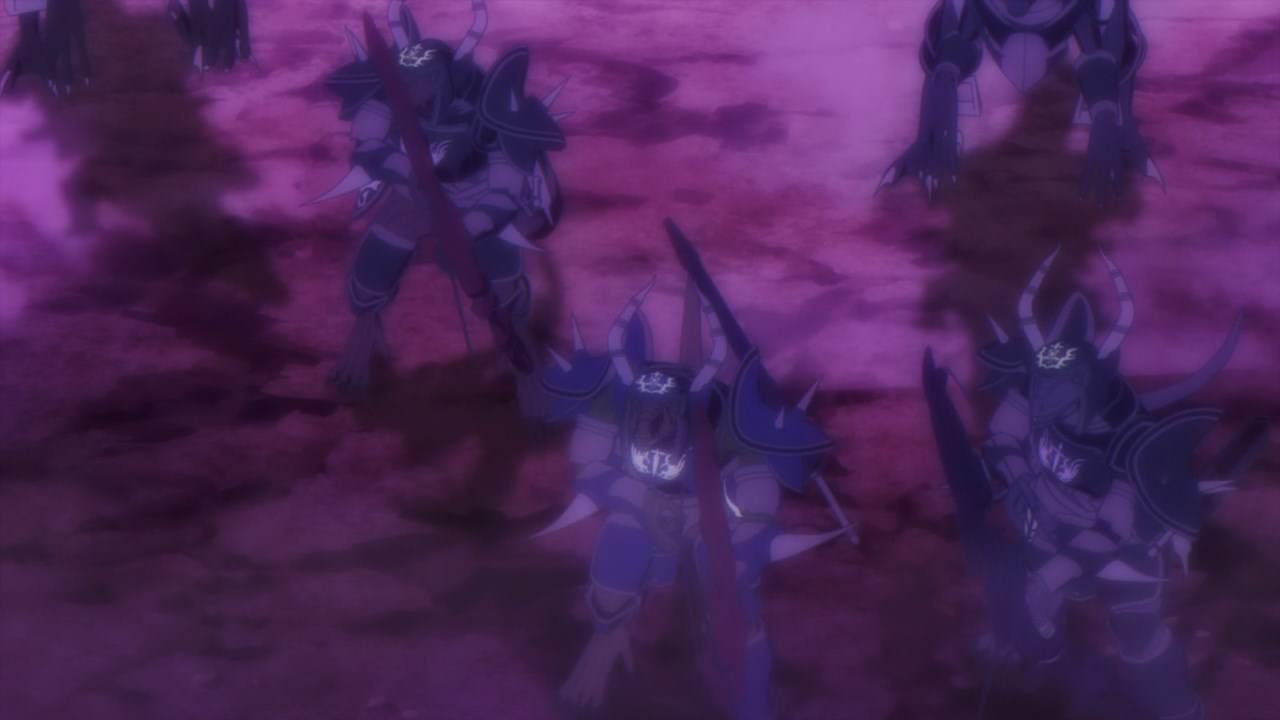 Anyways, Ichiro Suzuki, now named as Satou, has encountered an army of lizardmen in which they’re here to kill him off. 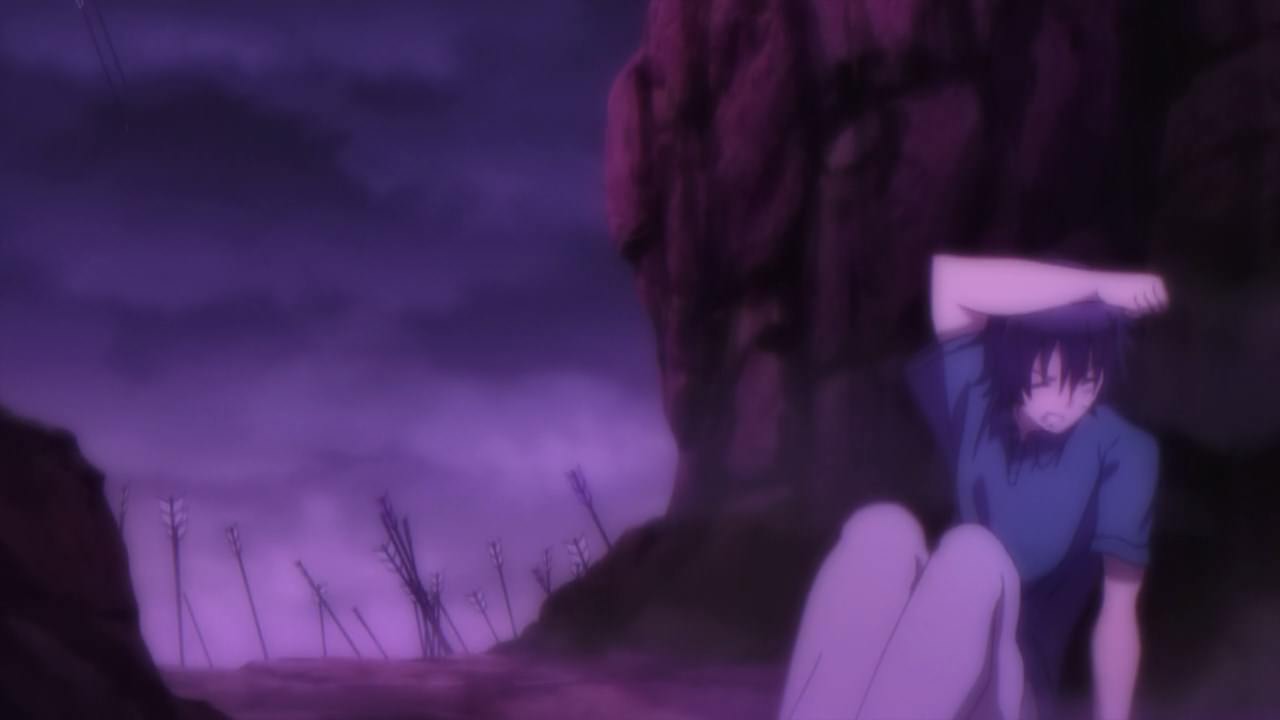 As you can see, Satou almost got hit in the chest or even the knee at worst. Luckily for him, Satou got 3 Meteor Rain spells at his disposal… 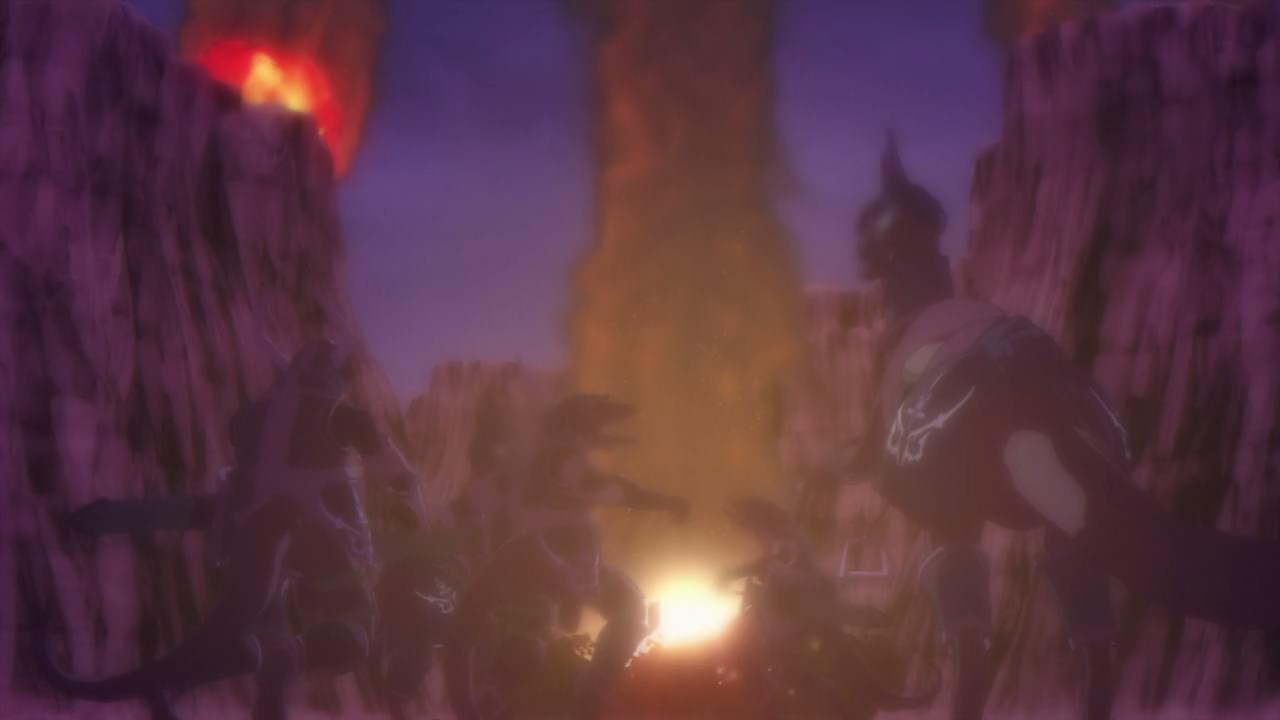 …which he used all 3 spells to destroy the entire army. I have to say that he went too far with the Meteor Rain! 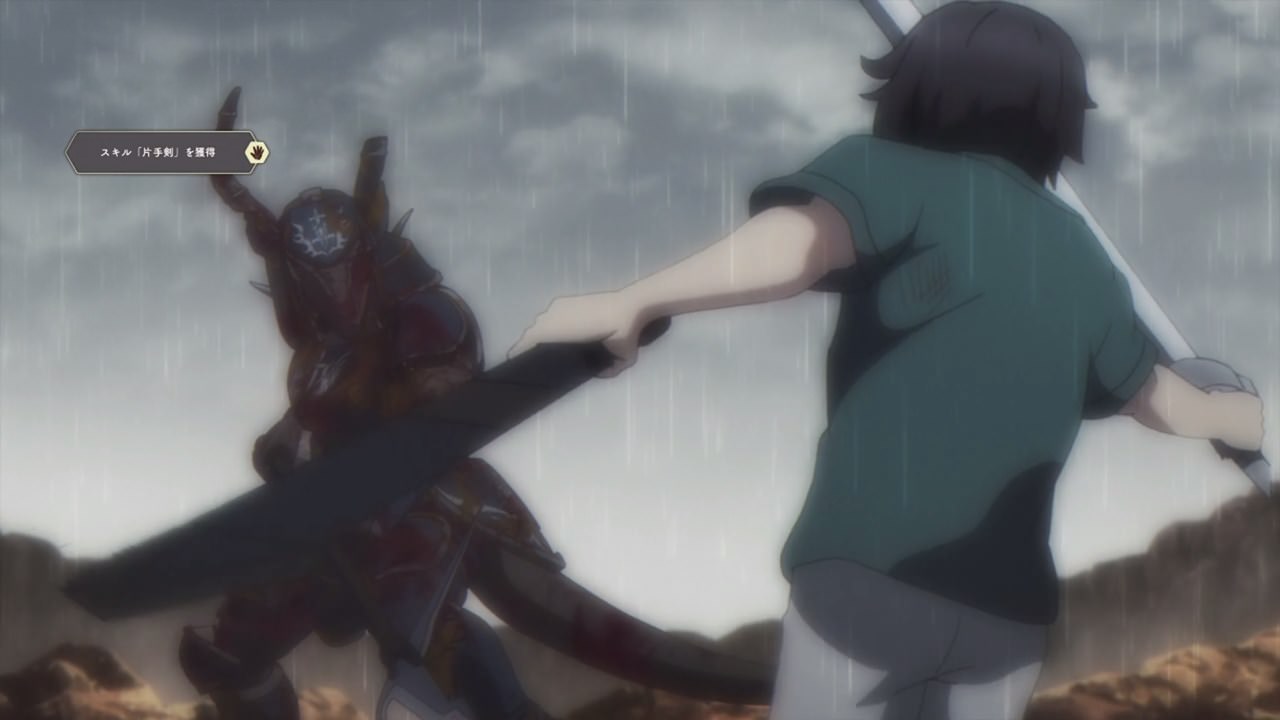 Unfortunately, one lizardman survived as this monster challenged Satou to a sword fight. By the way, notice that it has a pop-up message since this world looked like a game. 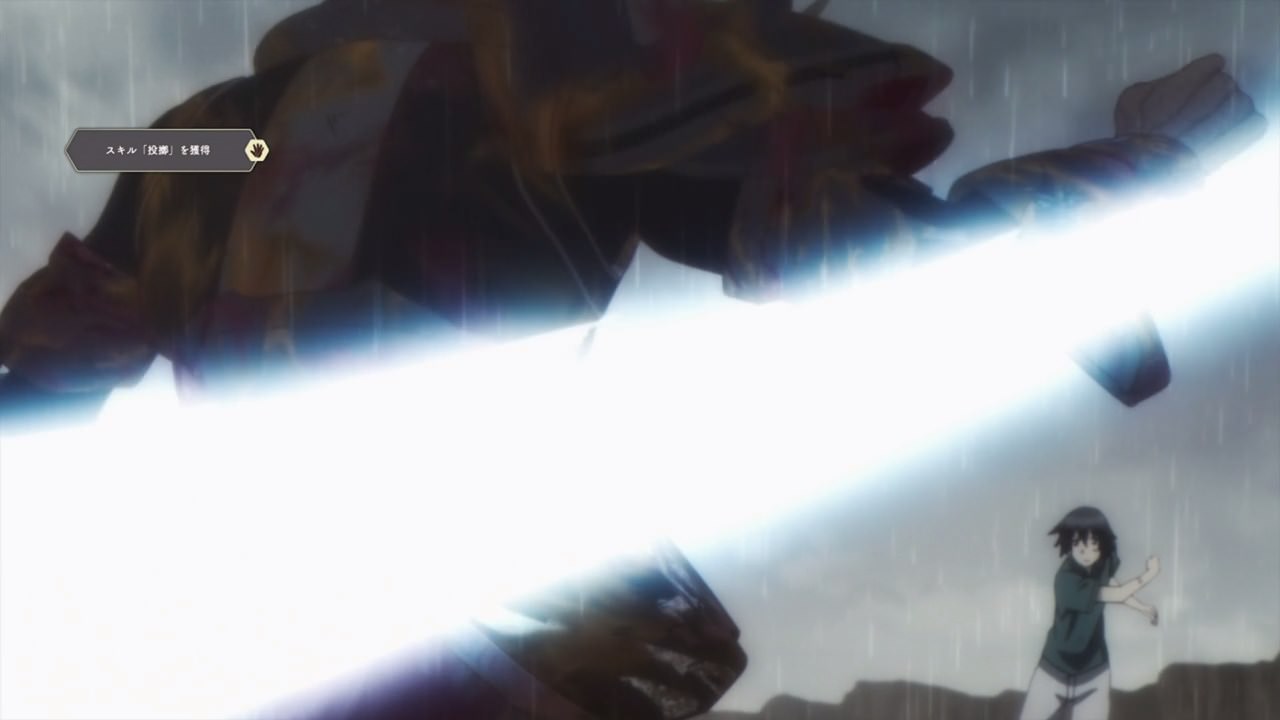 But for Satou though. he just throws the sword at the lizardman, killing it instantly. Wow, I wonder if Satou is overpowered though as he throws that sword like a cannonball? 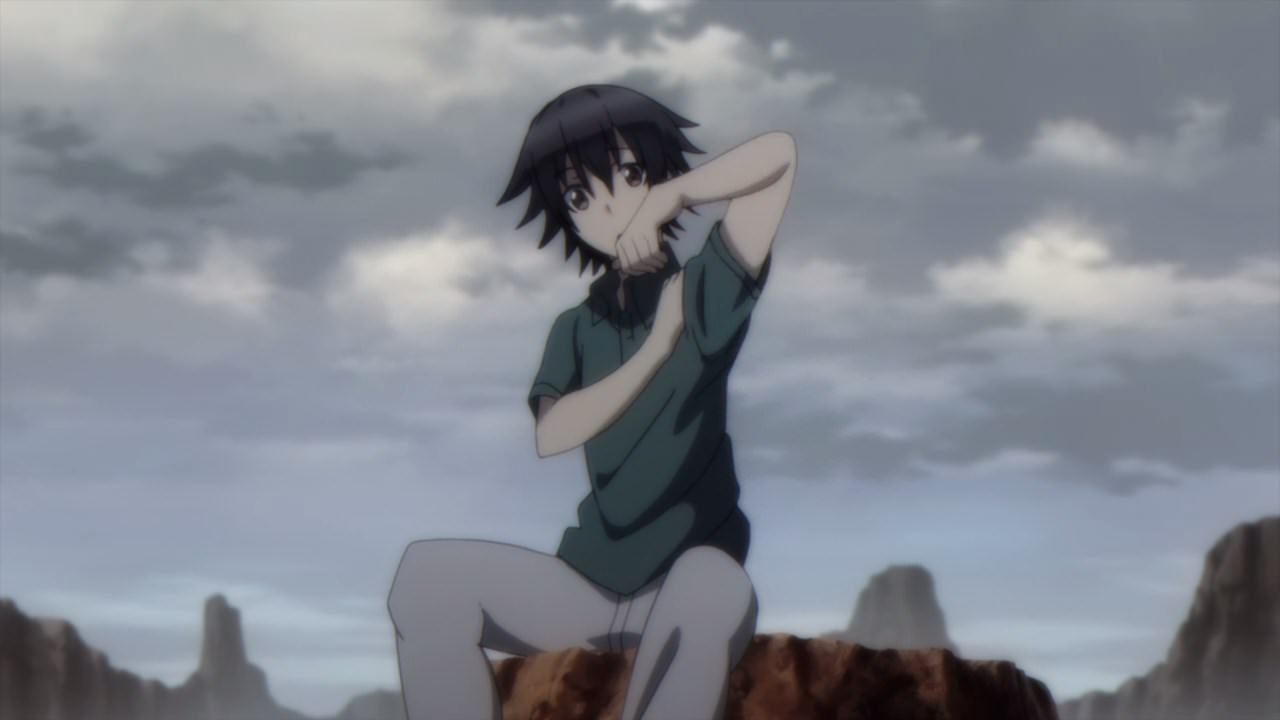 Turns out, you might be surprised as Satou’s cuts and bruises are magically healed. Could it be that he’s become an overpowered character? 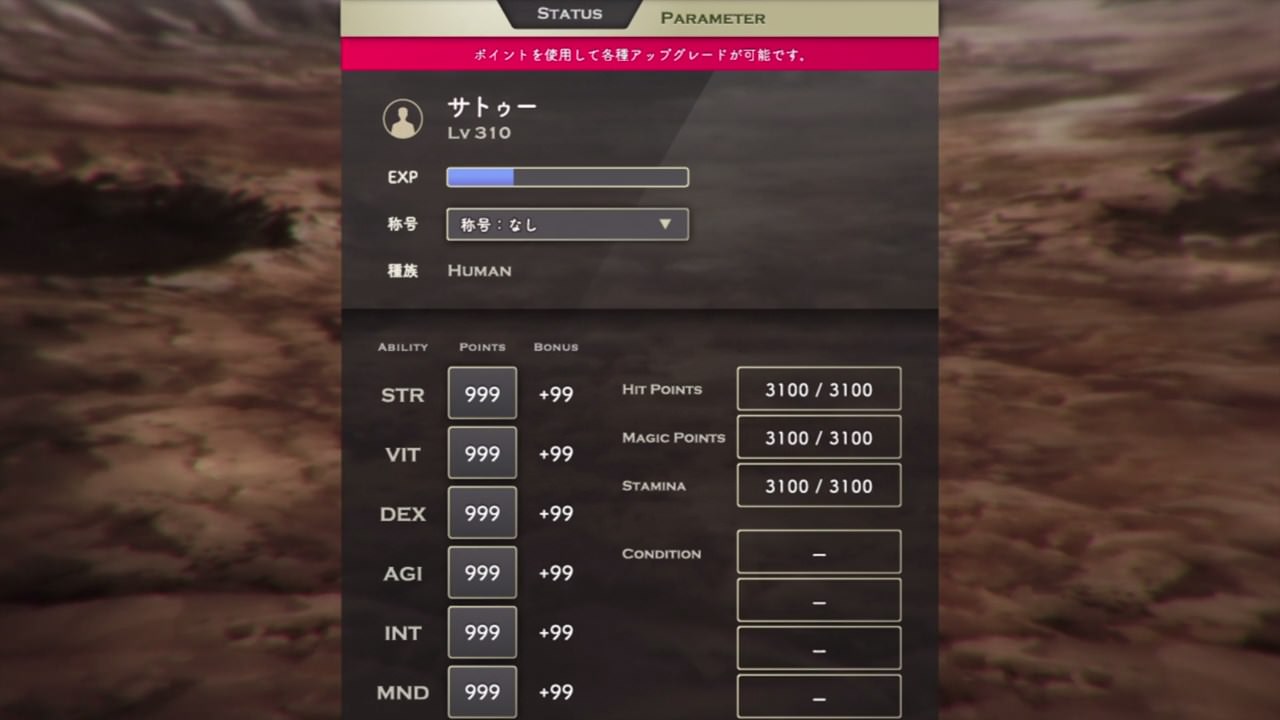 Why yes it is as Satou has reached Level 310 with max stats to boot. It’s all thanks to the Meteor Rain spell that he managed to kill an entire army of lizardmen and got lots of experience points after casting three spells.

Looks like we have a character similar to Kirito, Tatsuya Shiba, any other overpowered character you may think of. 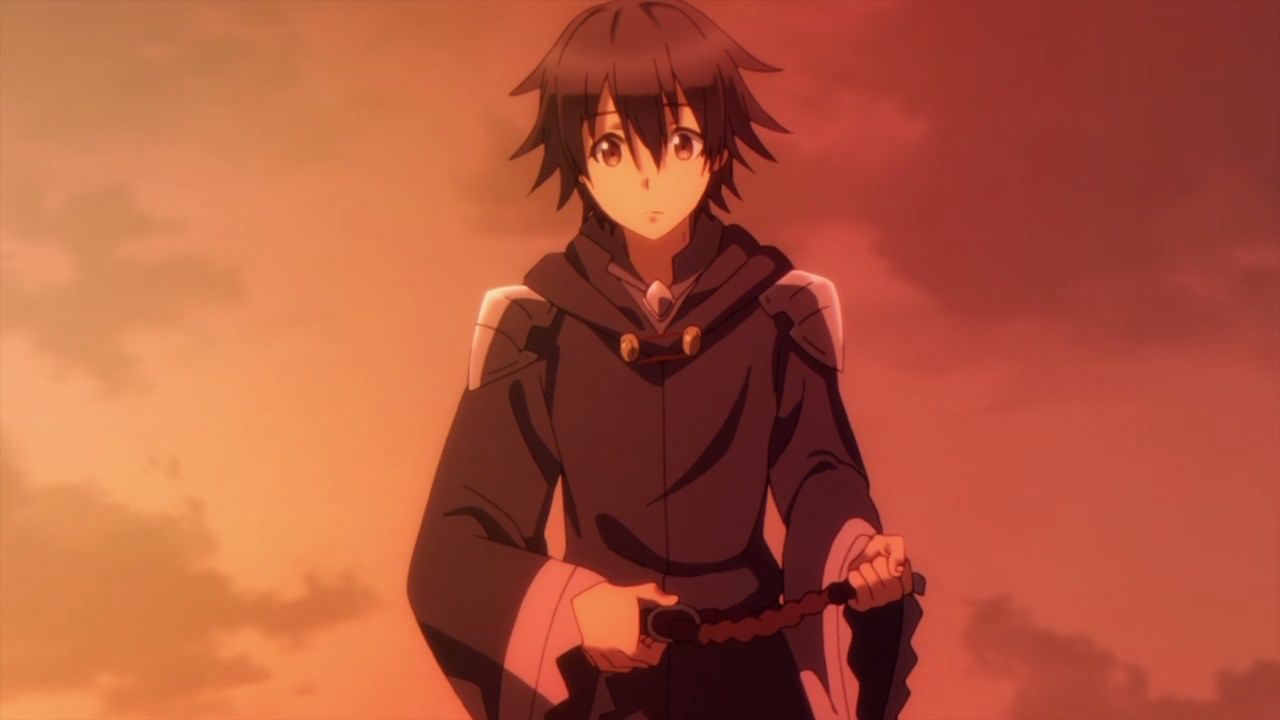 One last thing, Satou got some new clothes to wear and he has a lot of items to use. Heck, Satou has a sword and a gun to play his fantasies as a cool-looking hero during his middle-school years.

Now that he’s all stacked-up, Satou is ready for a new adventure in this new world, even though I fear that he actually died in the real world. 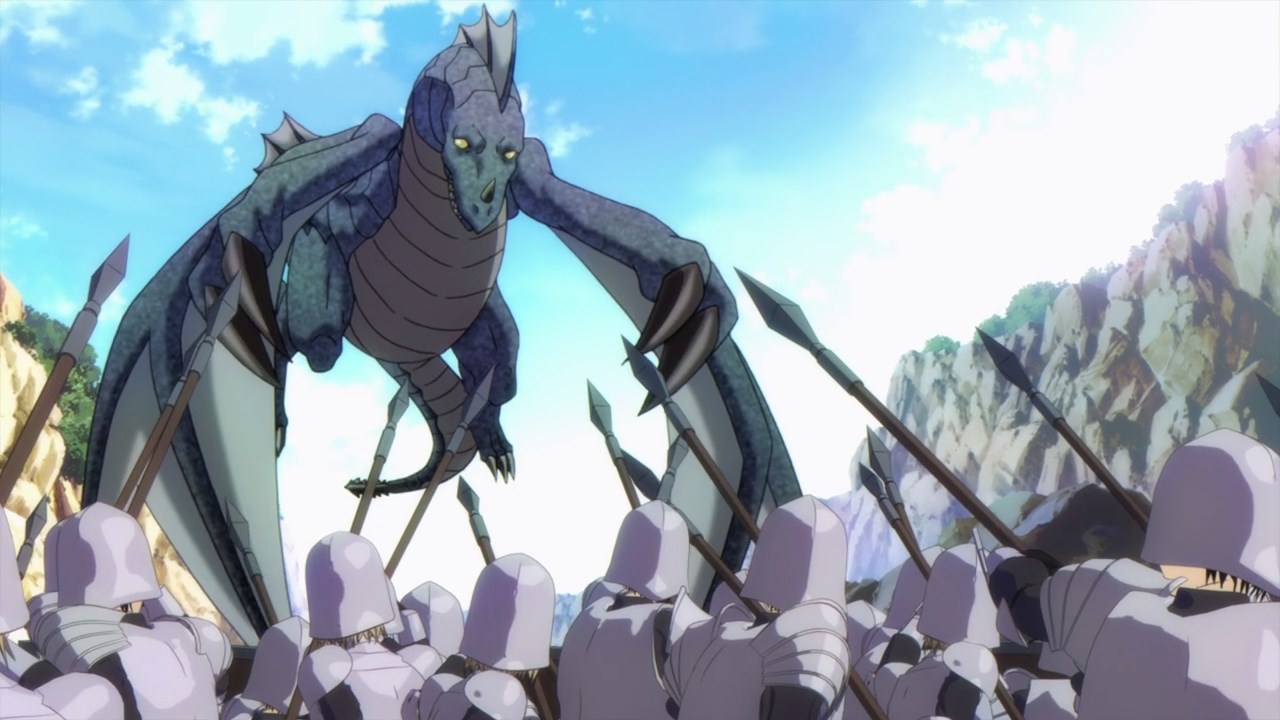 And his first task as a new adventurer is to kill a wyvern in which an army from Salue is struggling to kill it. 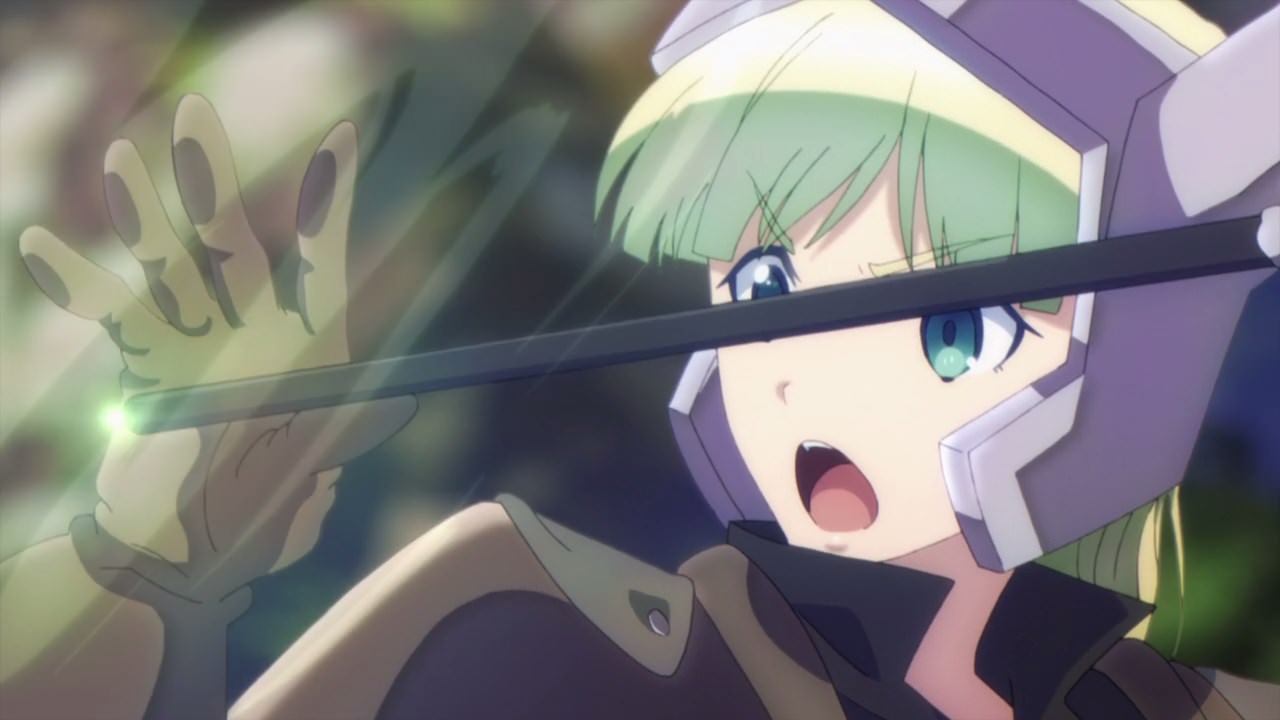 On the other hand, there’s one female warrior named Zena who’s about to cast a powerful wind spell called Air Cushion… 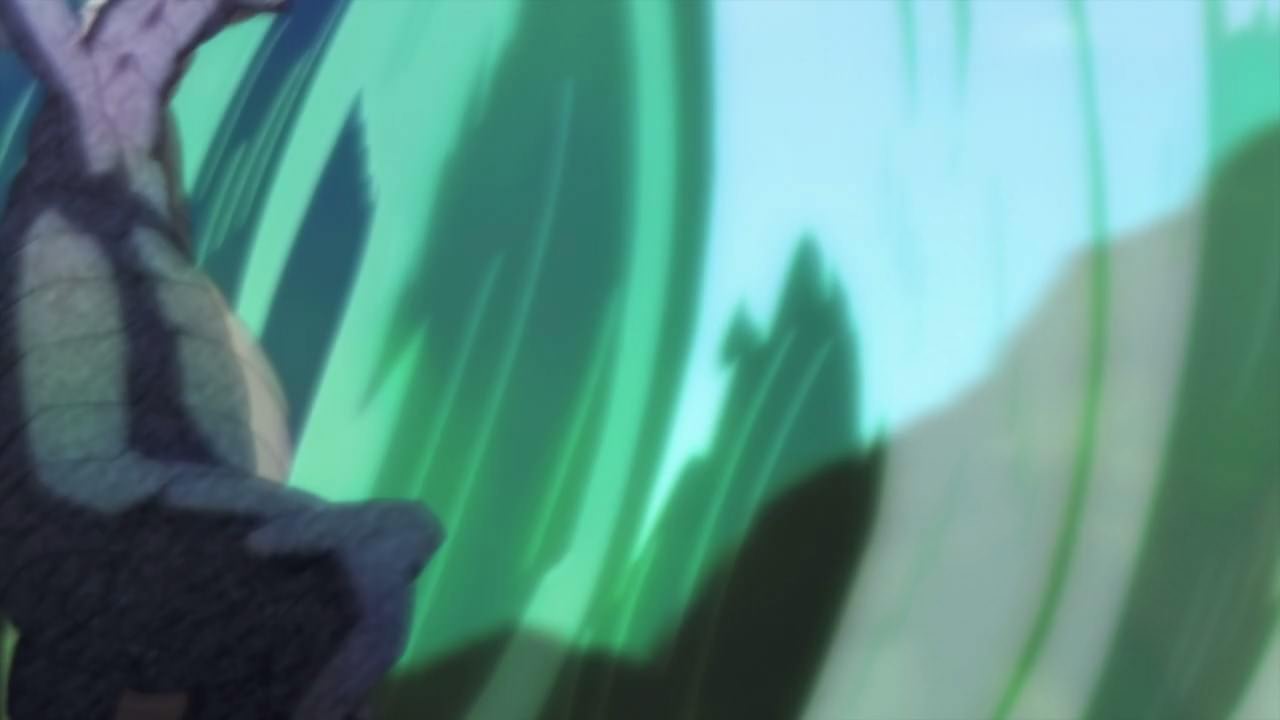 …which pushed the wyvern away. So yeah, seems that the Salue Army will take care of this. 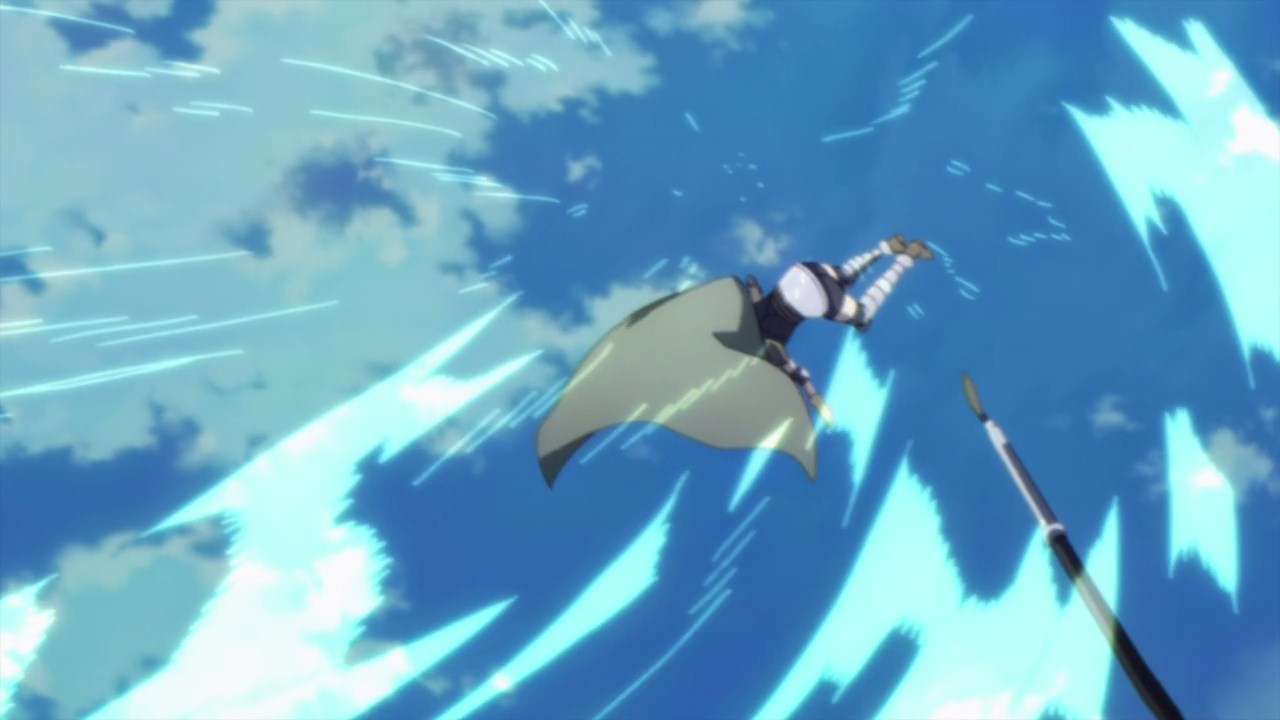 Then again, they lost Zena as she was pushed back because of her powerful spell. Looks like she needs some practice on not letting herself off the ground. 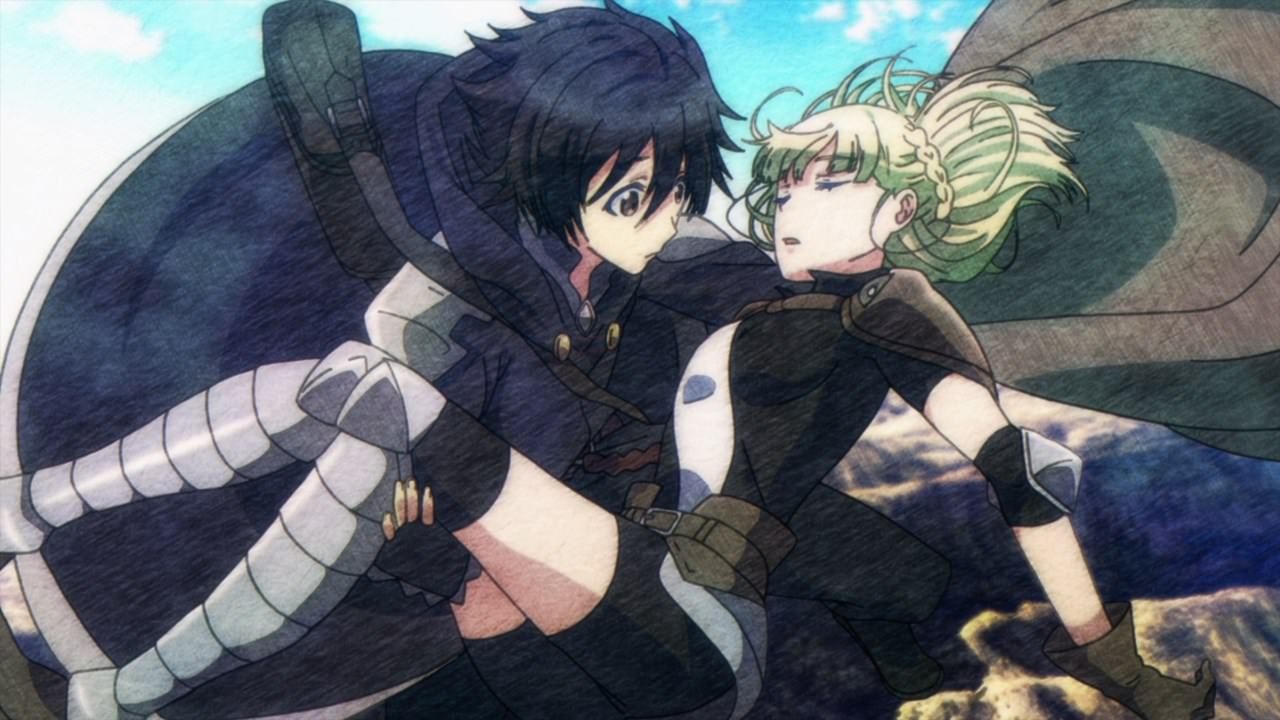 Luckily, Satou managed to rescue Zena from falling to the ground. And I must say that it’ll be the real start of his adventure as the most-powerful character in the parallel world.

That’s the first episode of Death March to The Parallel World Rhapsody and it’s pretty much a cakewalk for Satou as he’s freaking overpowered… unless a curve ball was thrown in to ruin his day. In any case, this is one of those anime series where you enjoy seeing a powerful male protagonist doing badass stuff. Unless SILVER LINK shows something interesting, I think this show felt nothing special aside from having Wake Up, Girls! and Run Girls, Run doing the theme songs.

Anyways, I’ll see you on the next episode!