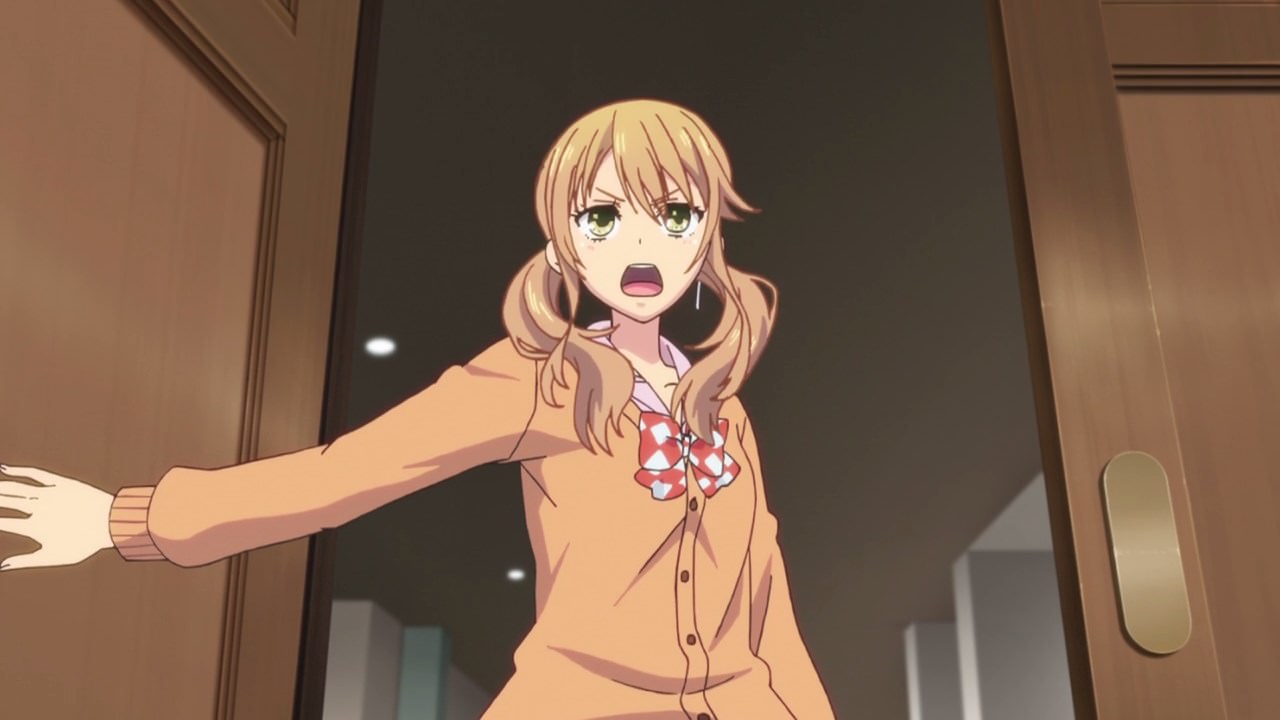 Well, looks like Yuzu Aihara won’t accept the expulsion from her grand- I mean the chairman of the all-girls’ school as she went to the office and talk to him. 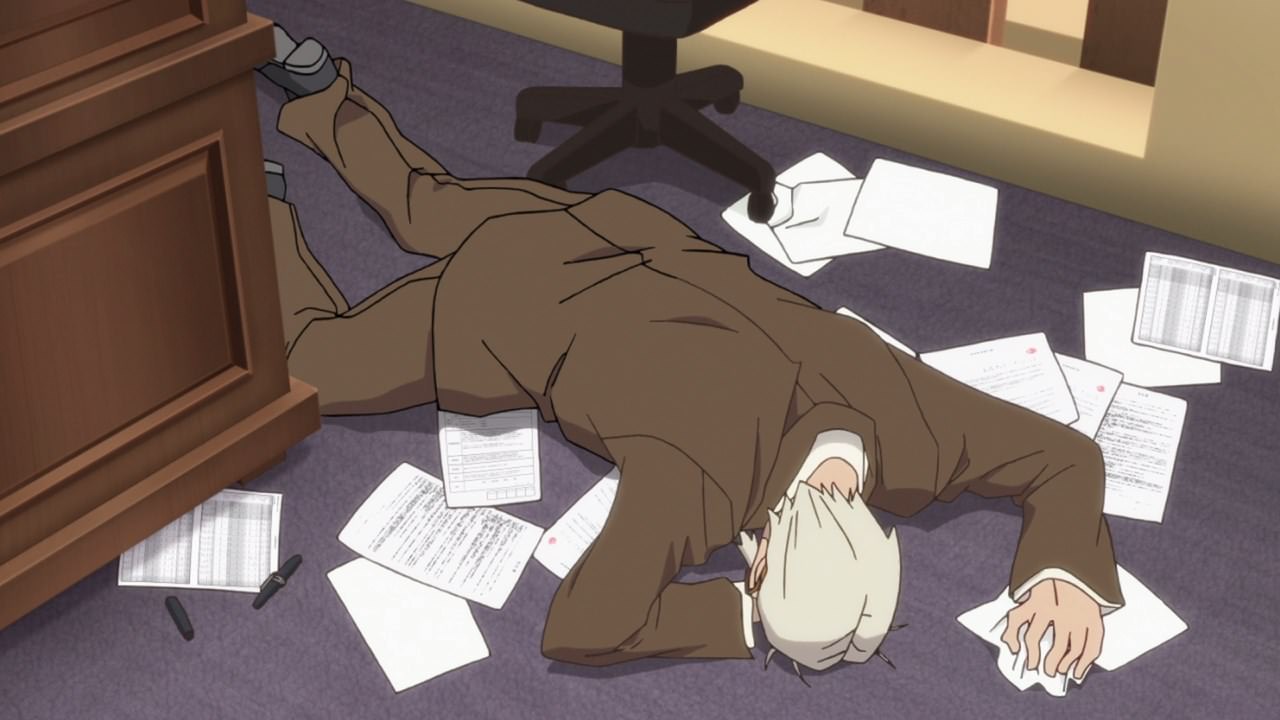 However, Yuzu found her grandpa having a heart attack and decided to take him to the hospital. I mean, she can’t leave him alone like this because Yuzu considers the chairman as part of her family. 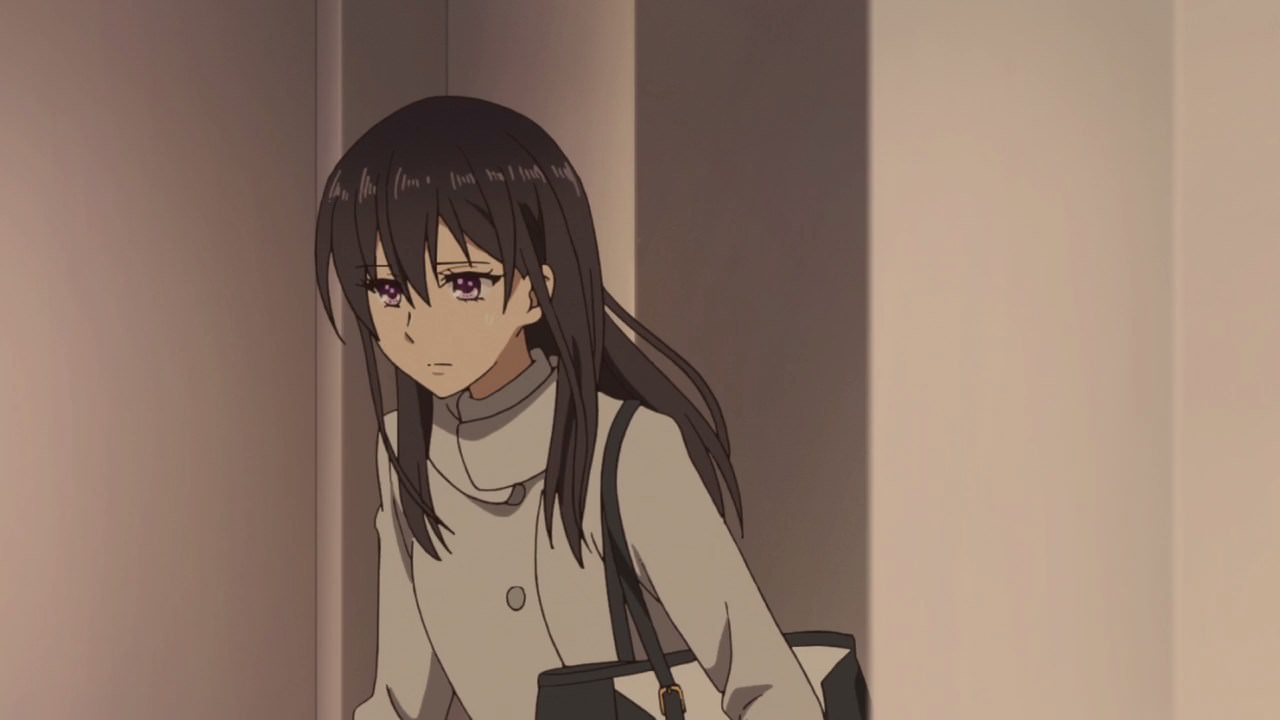 So when Mei heard that her grandfather had a heart attack, she went to the hospital to see if he’s alright. 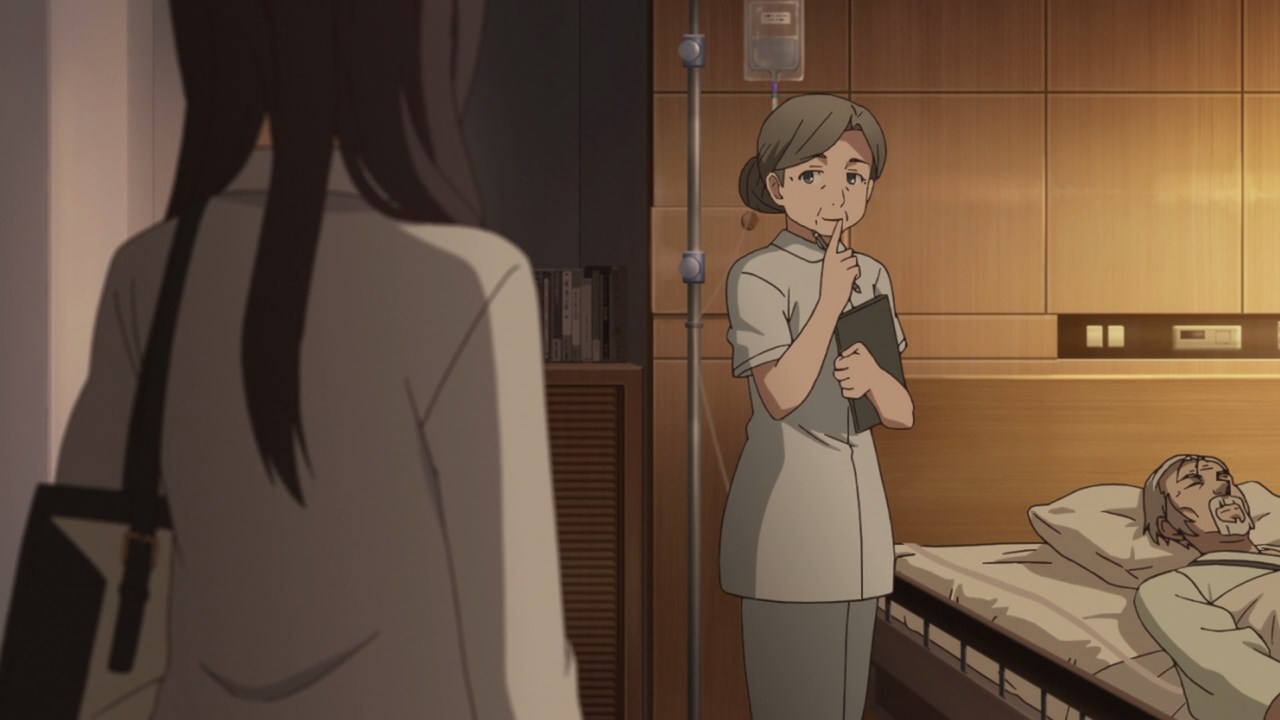 Luckily, the attending nurse told Mei that her grandfather’s health is now stable. Well, it’s all thanks to Yuzu that the chairman is alive. 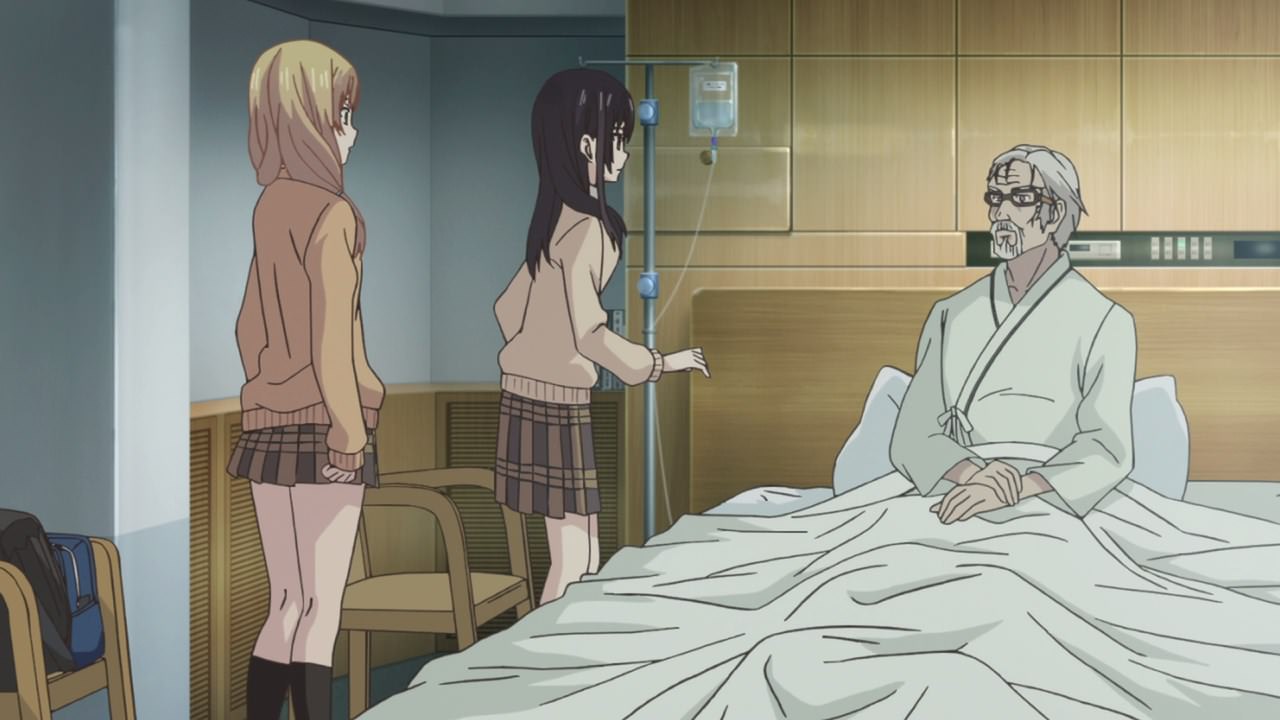 Afterwards, Chairman Aihara decides to revoke Yuzu’s expulsion as he realized that his pride couldn’t get to know about his new granddaughter beyond her appearance. Also, his hospitalization is the perfect time to reflect on his shortcomings.

In any case, glad that Yuzu didn’t get expelled just because she looked like a gyaru and did something wrong. Well actually, it was Mei who pushed and kissed her on the previous episode. 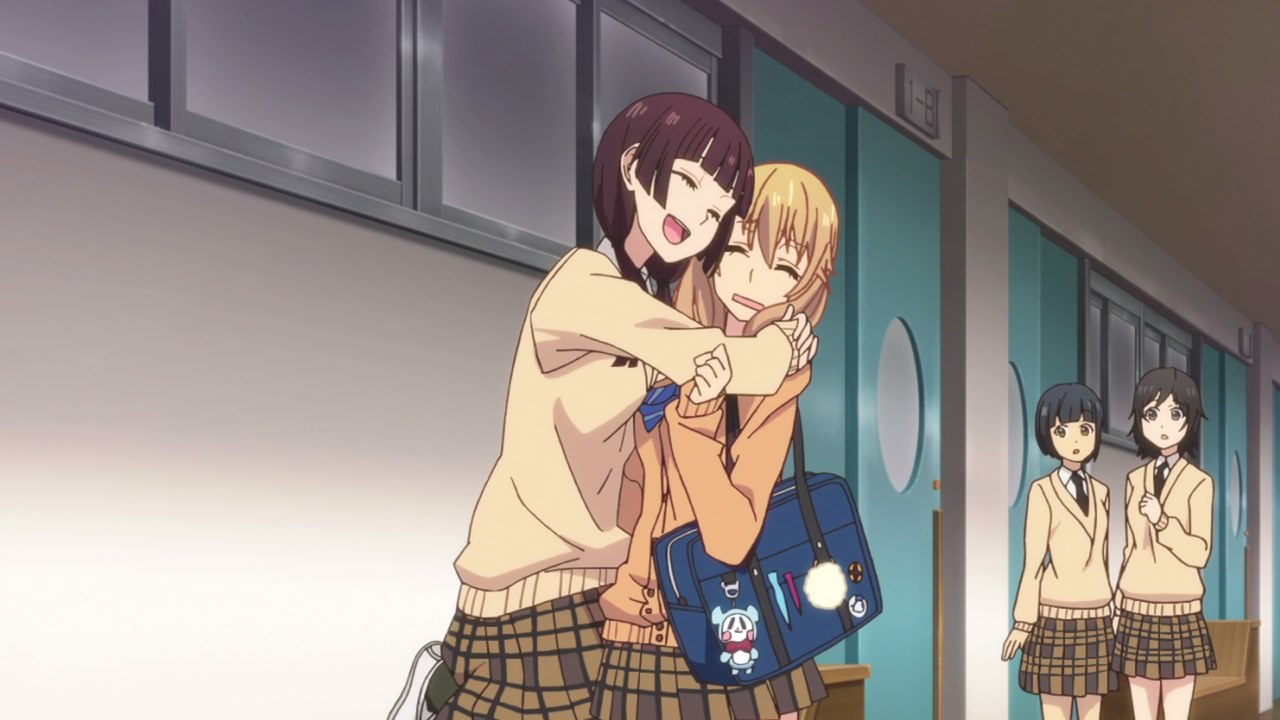 Well then, Yuzu Aihara is back in school and her friend Harumi Taniguchi is happy. Of course, I think Yuzu should wear her uniform properly just because her grandfather pardoned her. 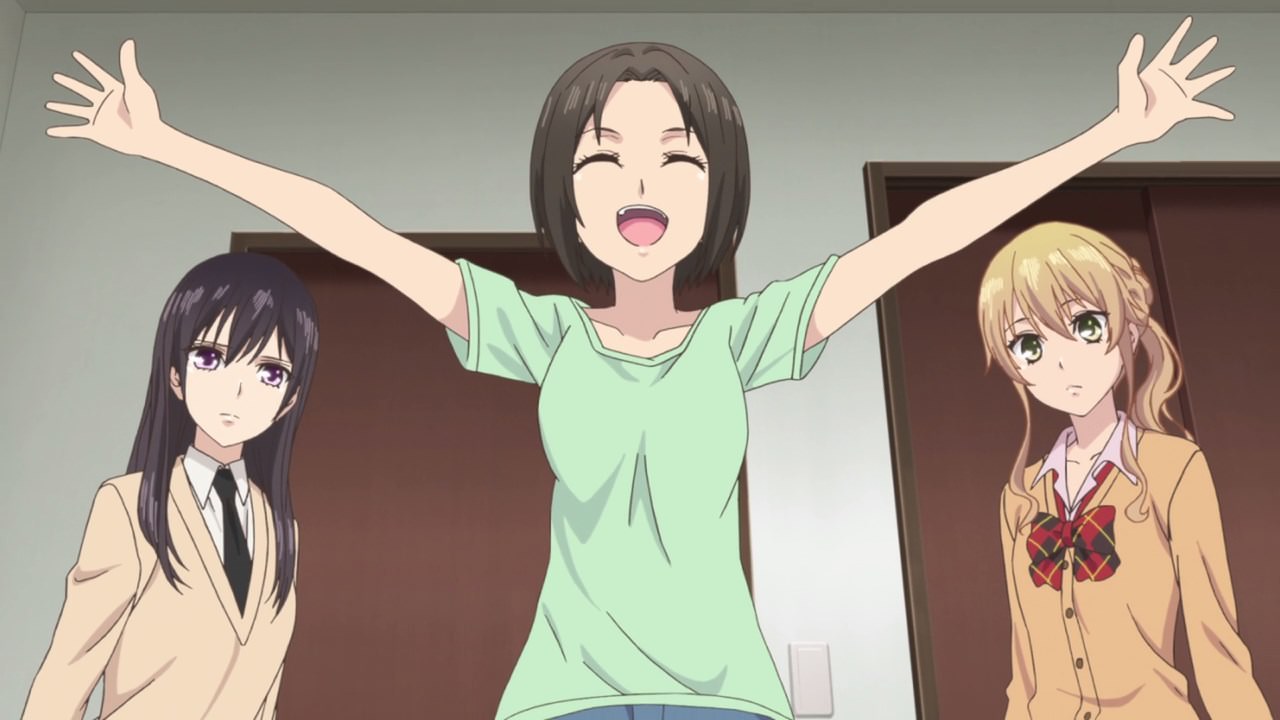 Meanwhile, Yuzu’s mother Ume is happy that Mei has returned to their apartment. And to celebrate Mei’s return… 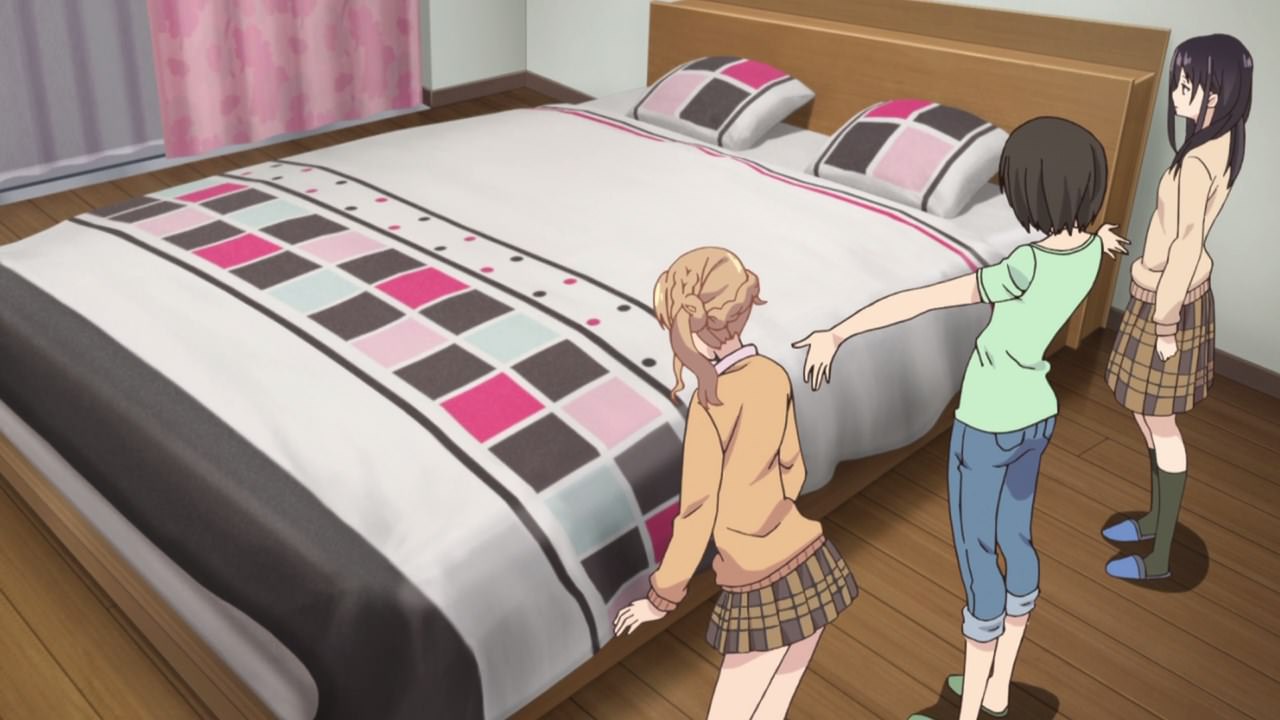 …Ume Aihara bought a king-size bed for both girls to sleep with. How nice to have one! 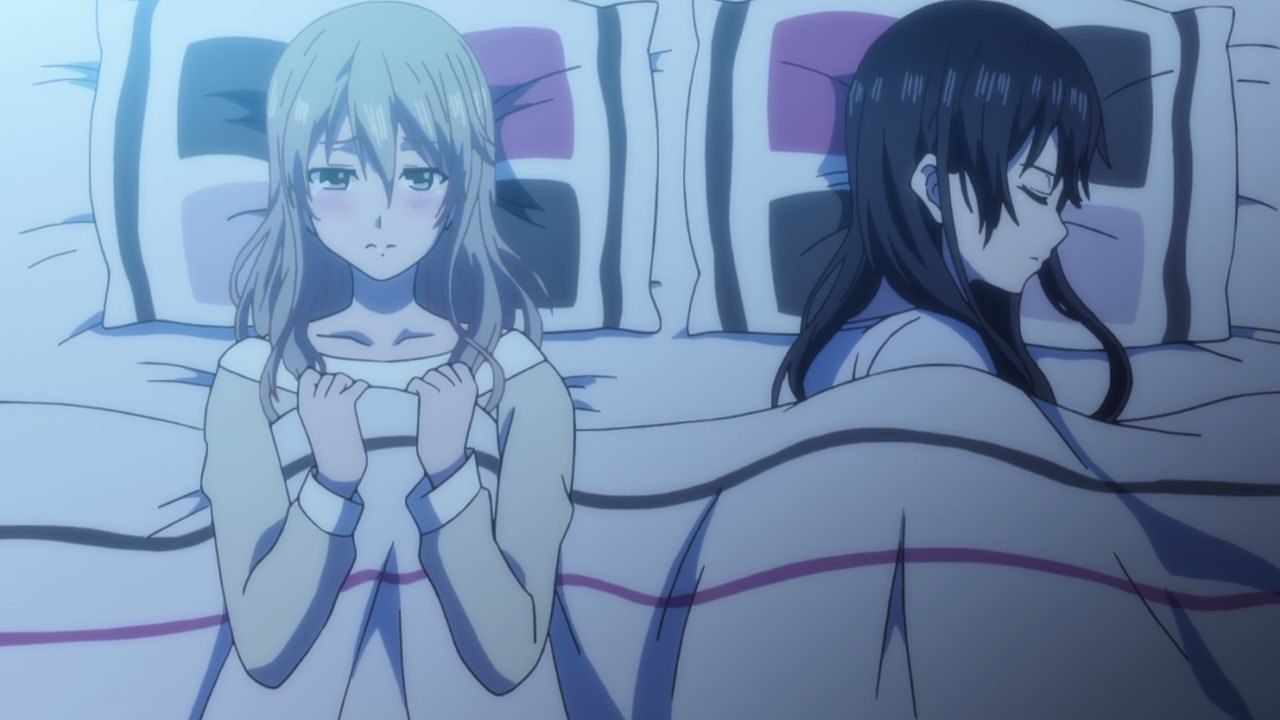 But then again, it appears that both Yuzu and Mei are so distant to each other that they rarely talk. 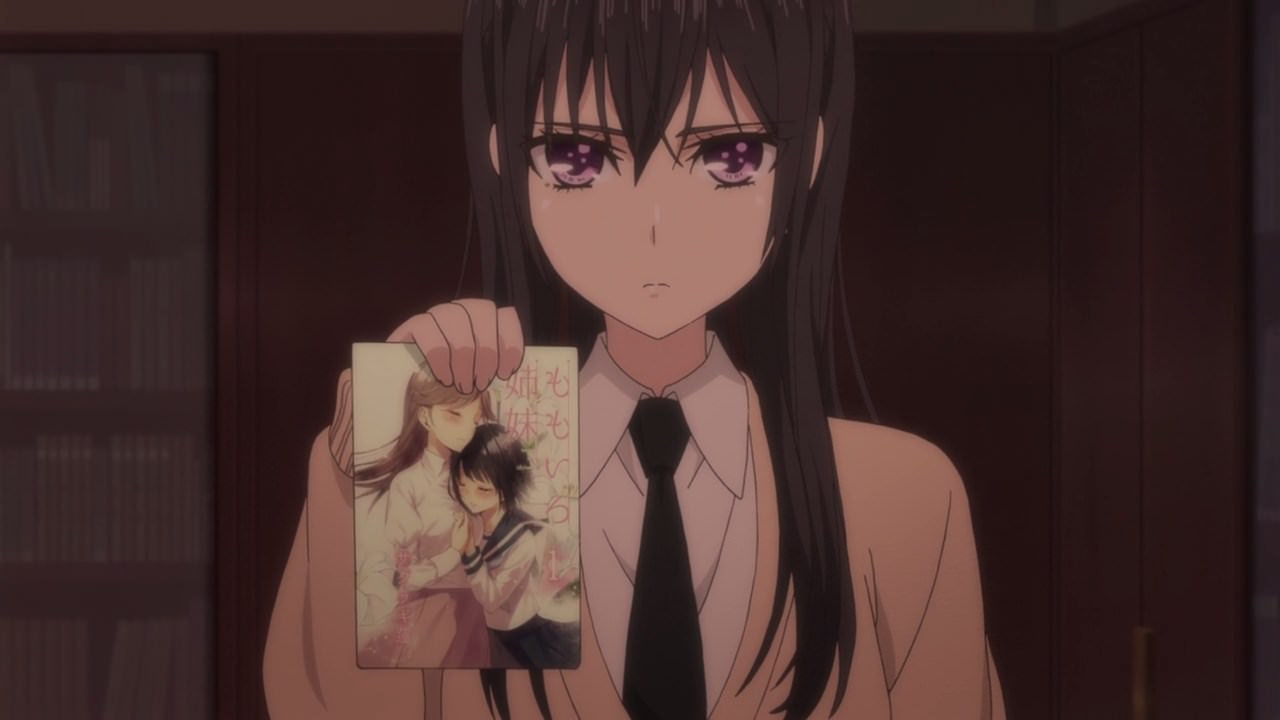 Also, seems that Mei is very strict towards Yuzu that she questioned her sister on why she brought a yuri manga of all things.

But you know what, I think Mei is just messing with Yuzu as she doesn’t love her step-sister very much! 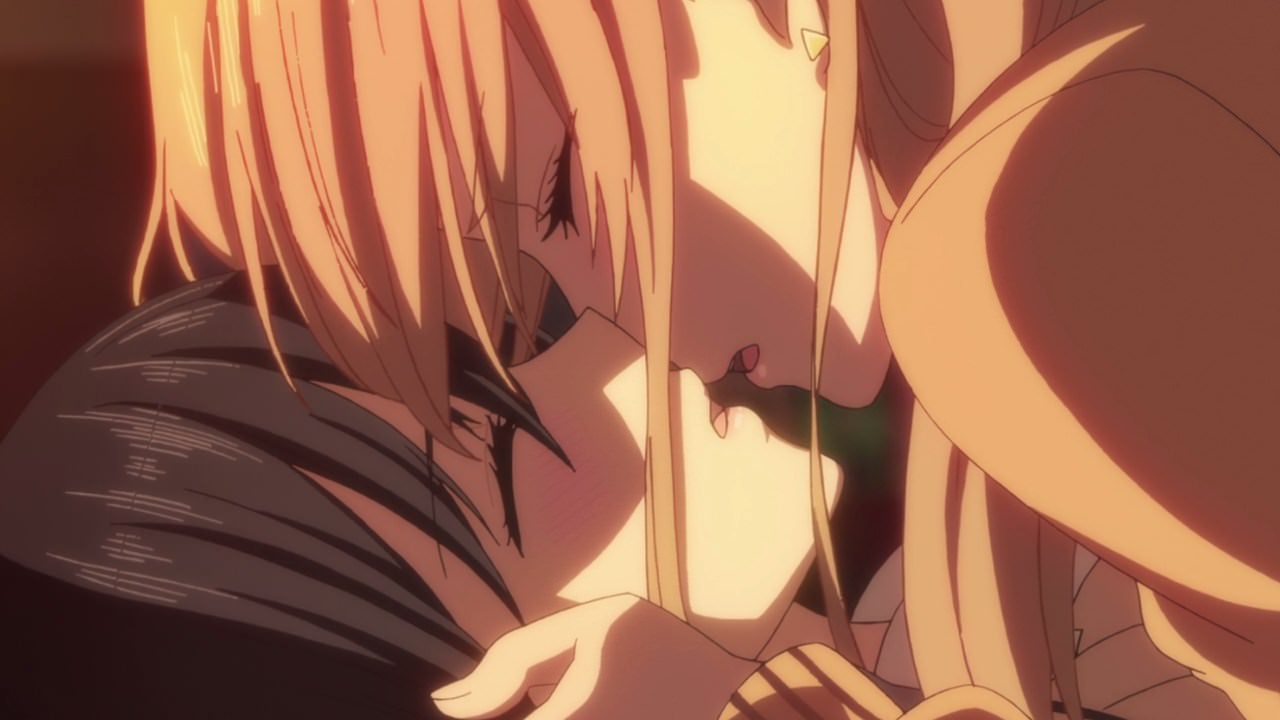 And so, Yuzu decided to shut Mei up and kiss her. Wow, Yuzu is on the offensive now after two episodes of being the receiving end! 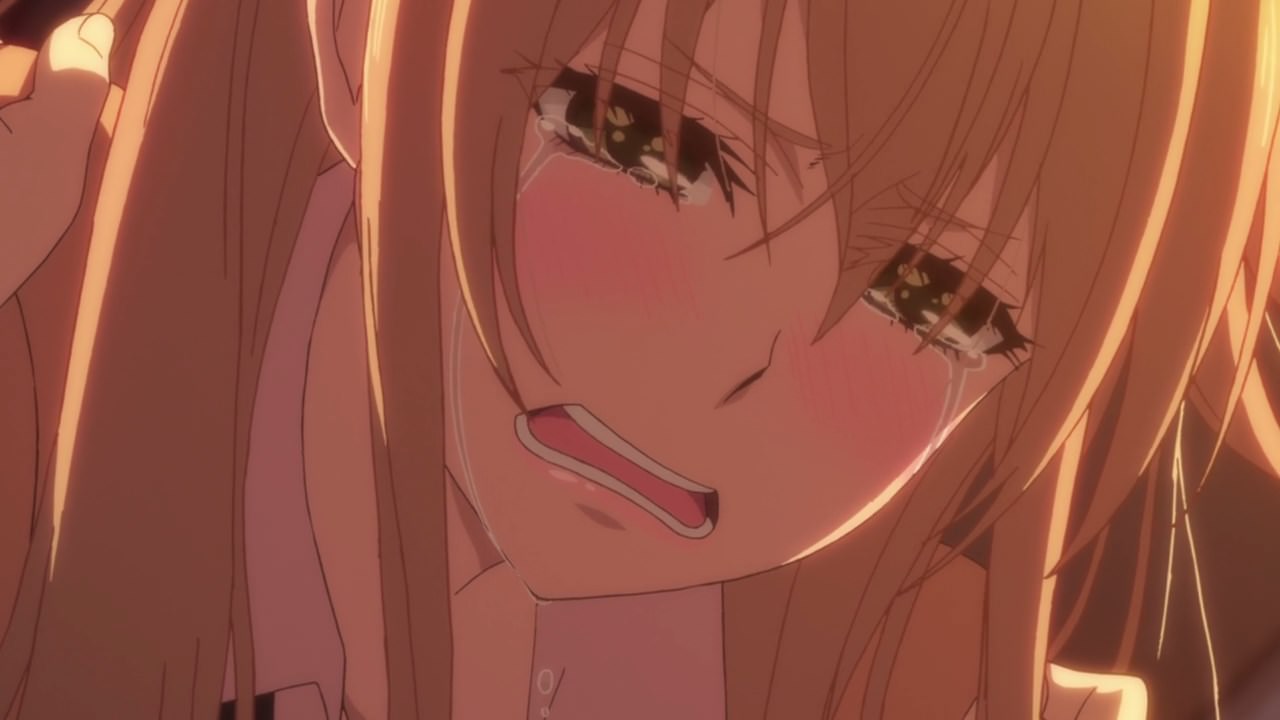 However, the reason why Yuzu pushed and kissed Mei is because she’s starting to fall in love with her step-sister. Not only that, but Yuzu called Mei as a jerk who played her heart.

Yeah, looks like that kiss from the first episode has changed Yuzu’s life in the most biggest way possible! 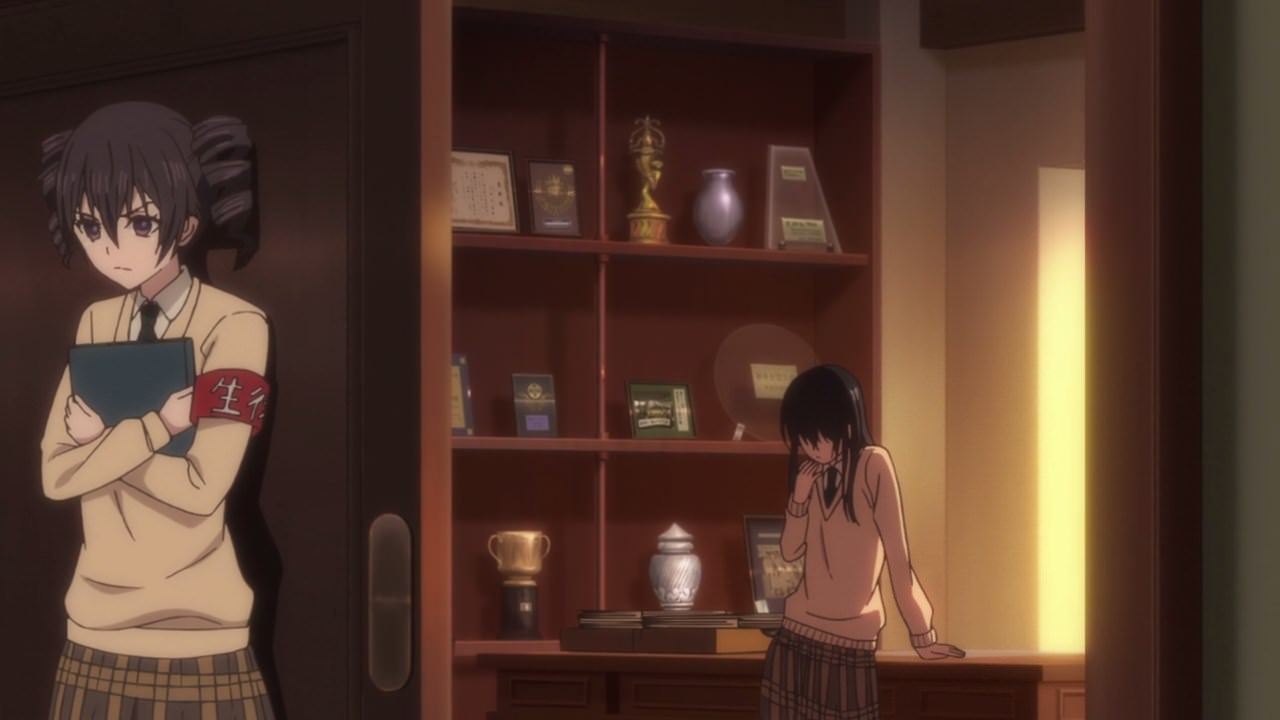 On the other hand, someone is looking at Mei behind the scenes. Oh boy, we have a potential rival to Mei’s affection!

Anyways, I’ll see you next time as things are getting complicated on this yuri series…