Darling in the FranXX Episode #04 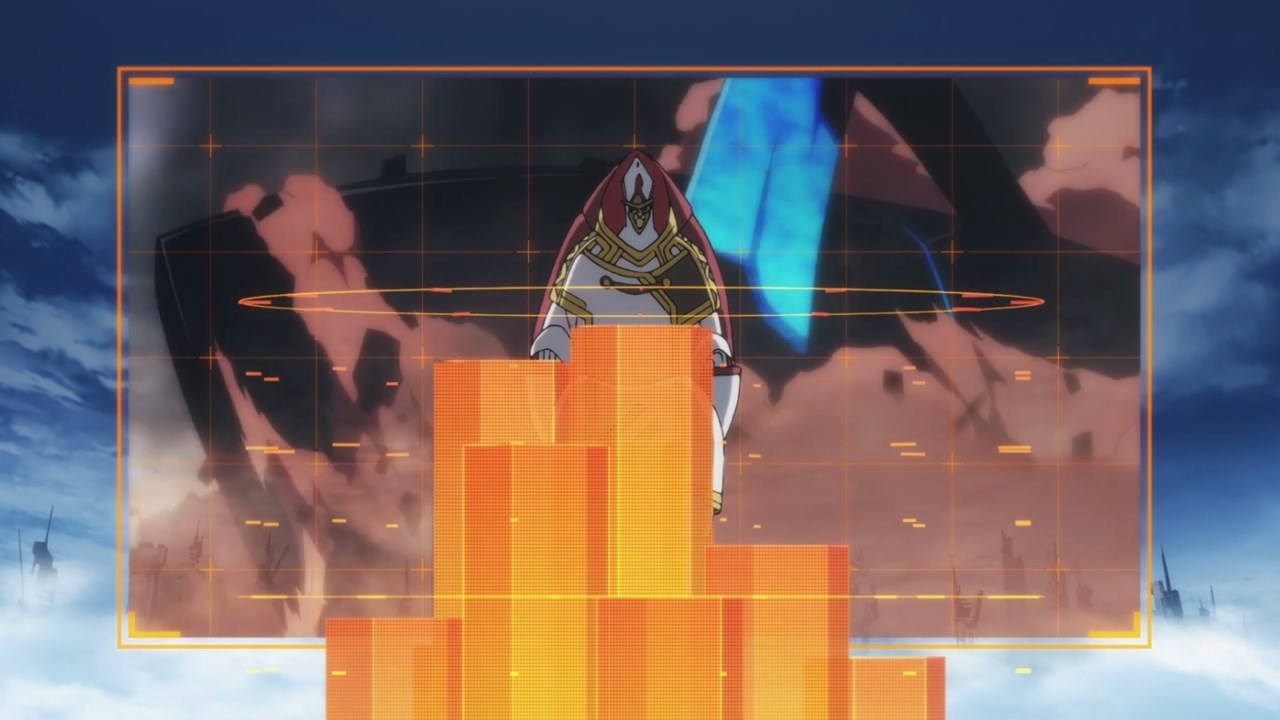 Looks like Papa and his fellow council members are discussing if Code:002 “Zero-Two” shall remain in the fort city.

But after the events that happened from last week’s episode, they decided to send Zero-Two to the front-lines while Code:326 “Mitsuru” will be replaced if his condition gets worse. Yeah, they don’t muck around when it comes to parasites that are basically disposable. 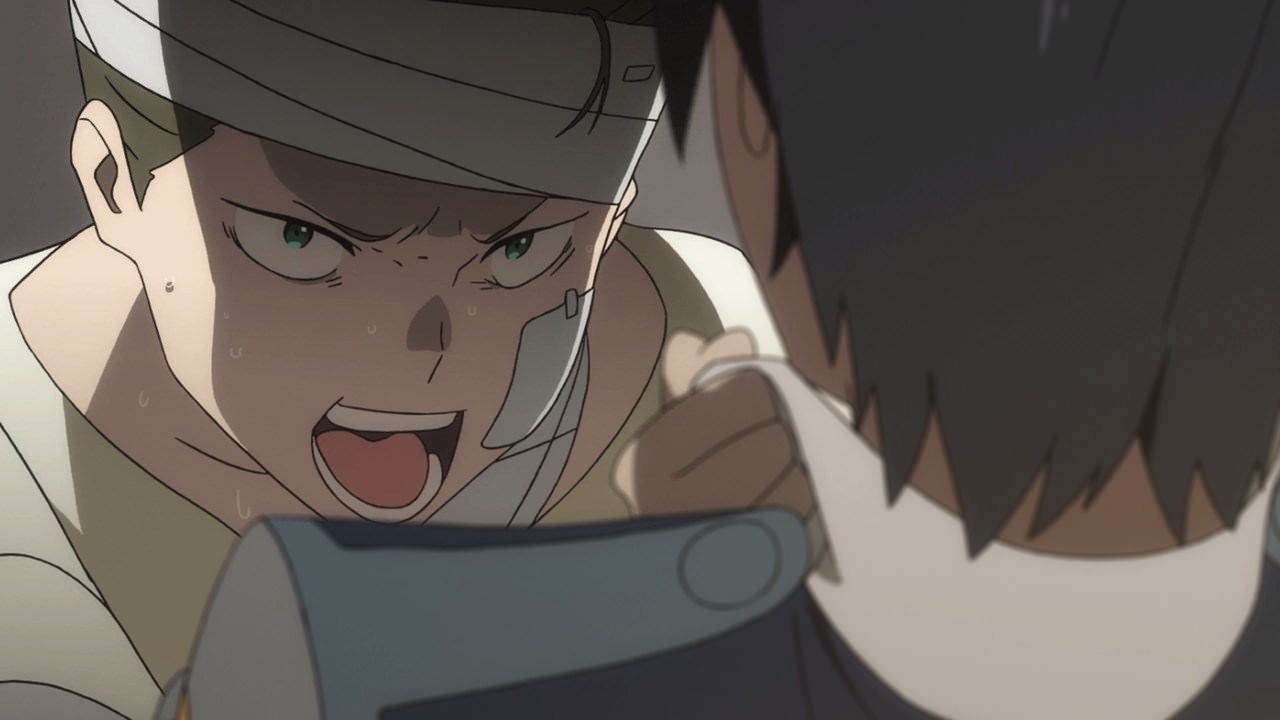 Speaking of Code:326 “Mitsuru”, it seems that he’s alive but Mitsuru is scared of piloting the Strelizia with Code:002 “Zero-Two”.

Well Mitsuru, you brought this on yourself and good thing you’ve survived the ordeal. Otherwise, you might be a goner right now! 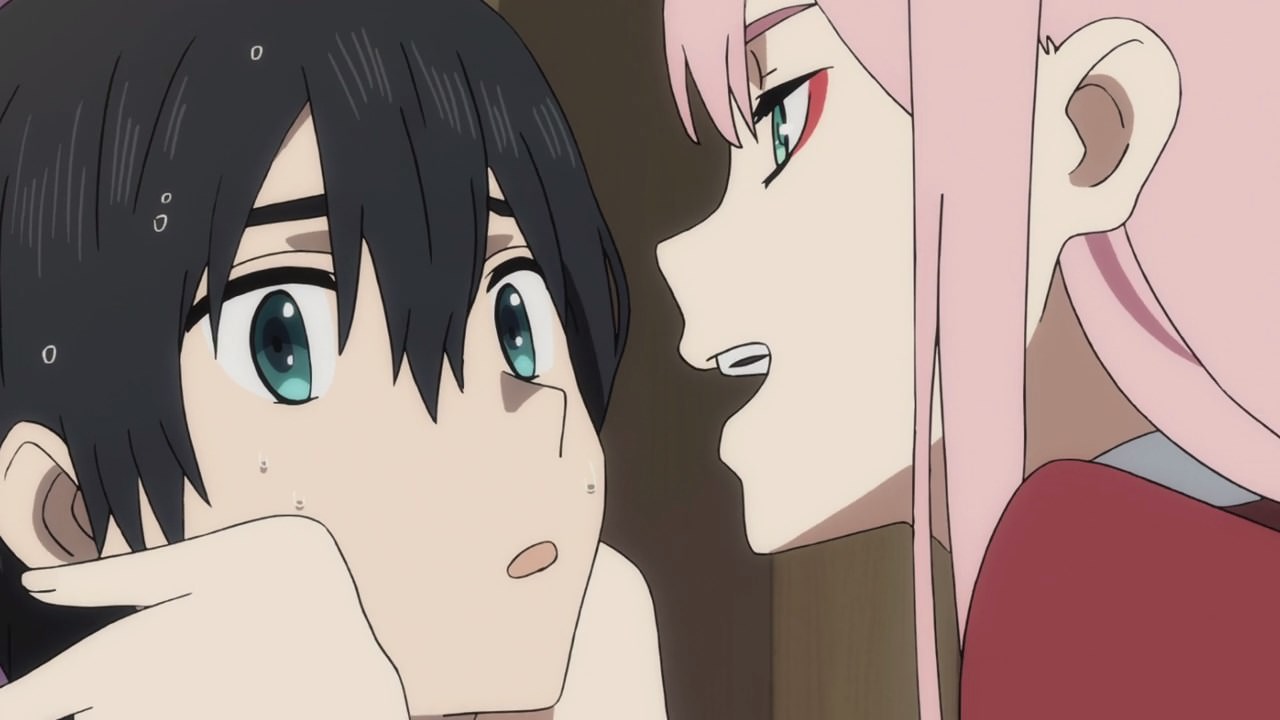 Meanwhile, here’s Code:016 “Hiro” as he’s got a little chat with Code:002 “Zero-Two”, asking him why he’s starting to stay away from her.

Well, it’s natural for Hiro to get scared at Zero-Two after the events from Episode 3. But you know what, it would be better not to stay away from Zero-Two because Hiro wants to pilot the Strelizia again. 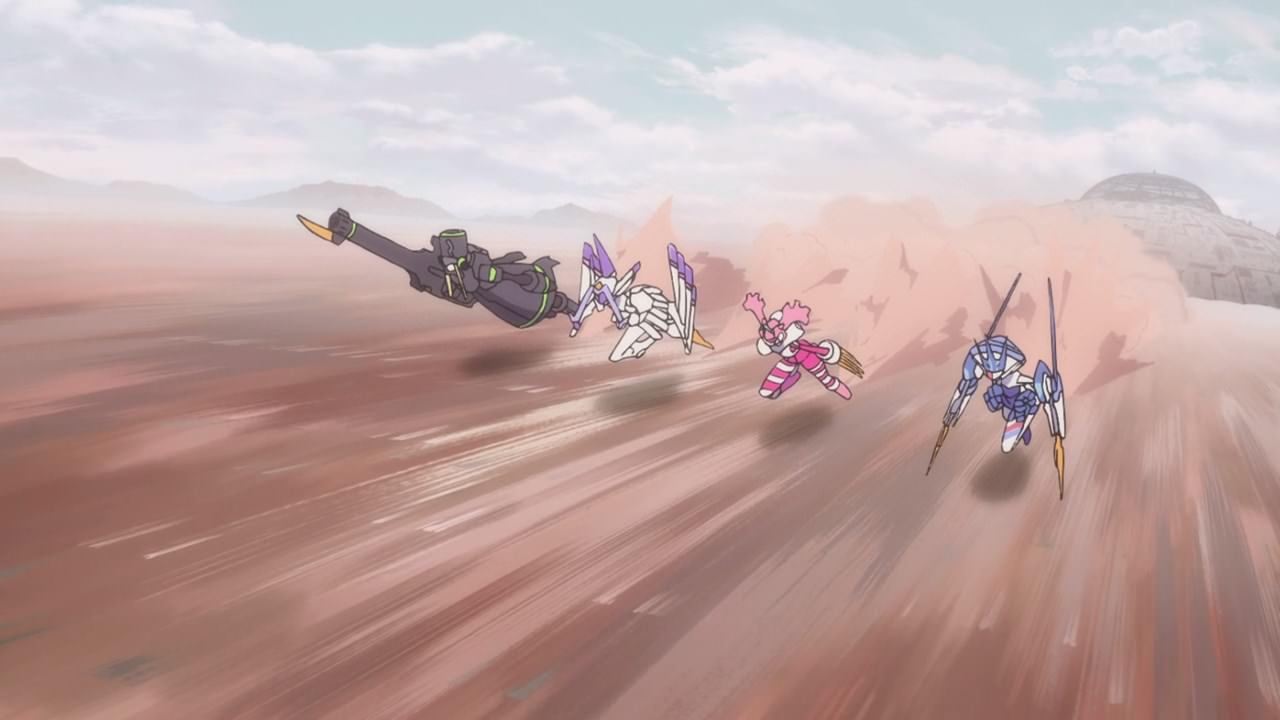 Anyways, let’s move onto the next scene where Mitsuru is able to sortie again as he was called to take down a worm-type klaxosaur. Well, at least he can sync again with Code:196 “Ikuno”.

On the other hand, these four FranXX might get beaten again without Strelizia. But you know what, the council should inject them with klaxosaur blood to make them powerful instead of being pathetic all the time. 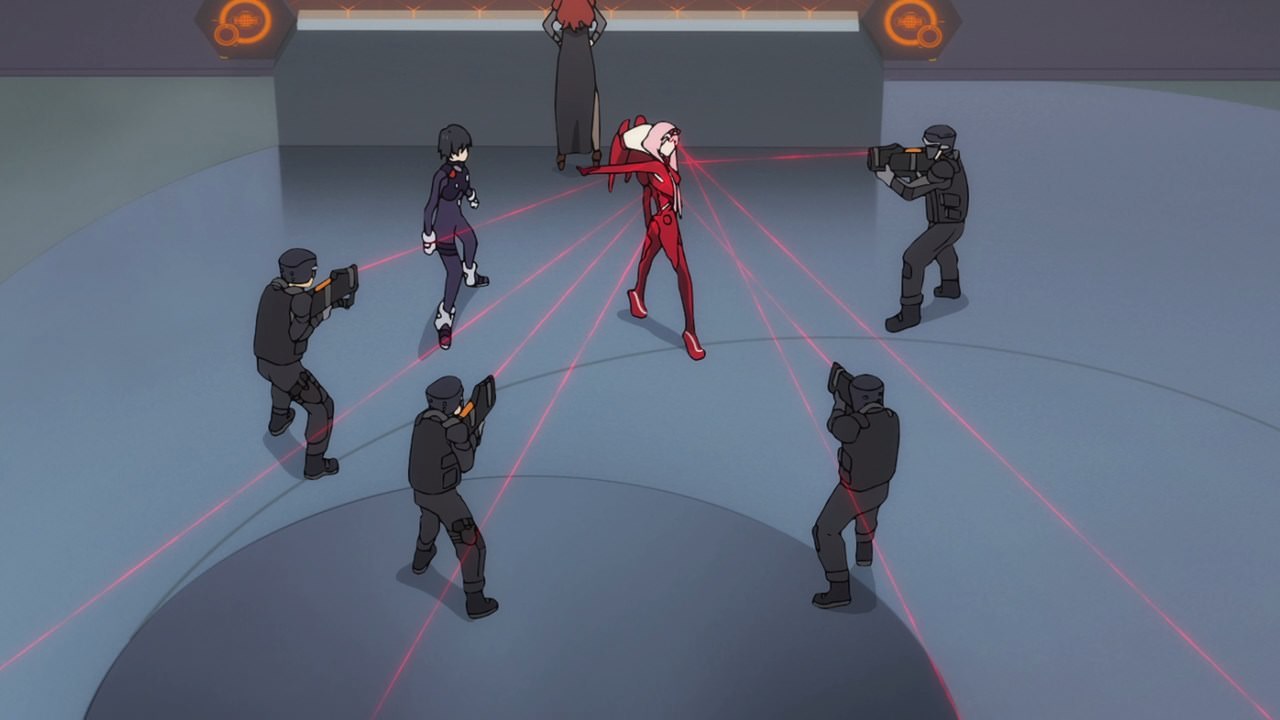 And speaking of Strelizia, it looks like Zero-Two’s FranXX will be taken away, including the pilot as she was told to go to the transport plane and leave Mistilteinn.

Well, there goes Hiro’s chance of proving himself that he could pilot a FranXX. 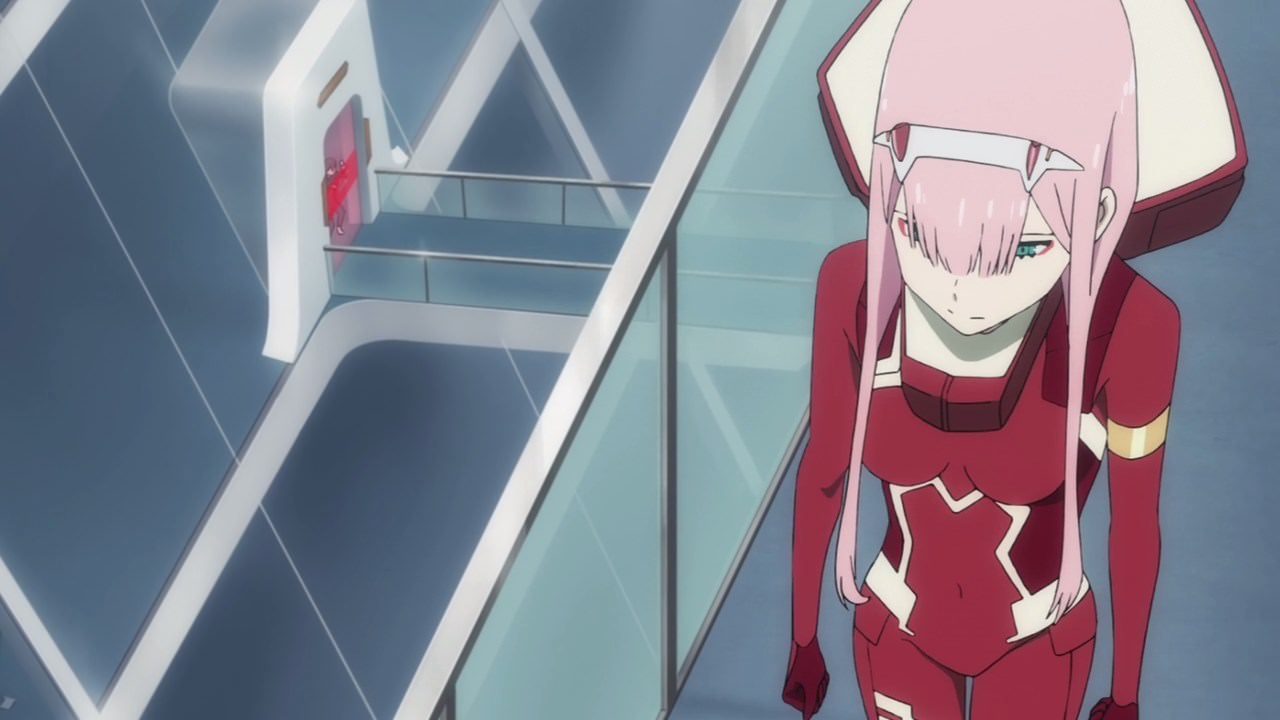 So, Code:016 “Hiro” chased Code:002 “Zero-Two” where he hopes that he could pilot with her again. Even then, Zero-Two will just ignore Hiro. 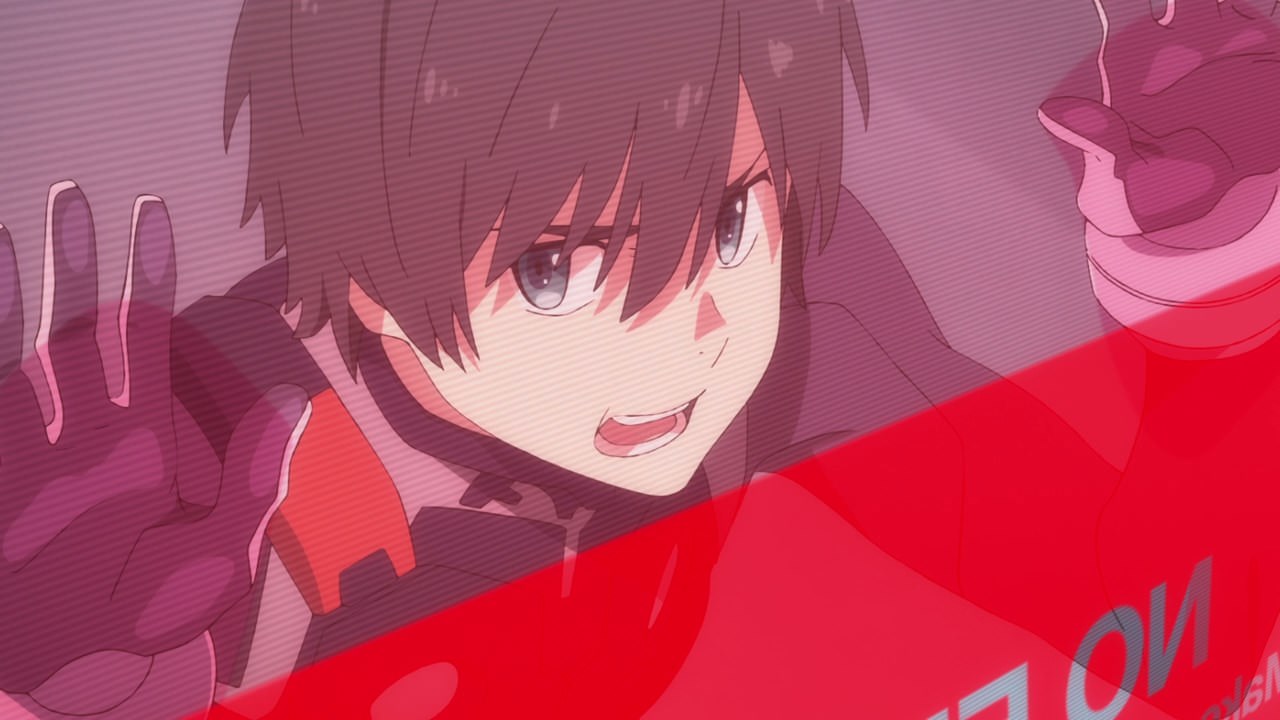 But then again, Hiro admits that he’s scared towards Zero-Two due to having klaxosaur blood and he lacks the resolve to pilot a FranXX.

In any case, Hiro wanted to be with Zero-Two ’cause it doesn’t matter if they’re piloting together out of convenience, it’s just that he wants to be with her no matter what. 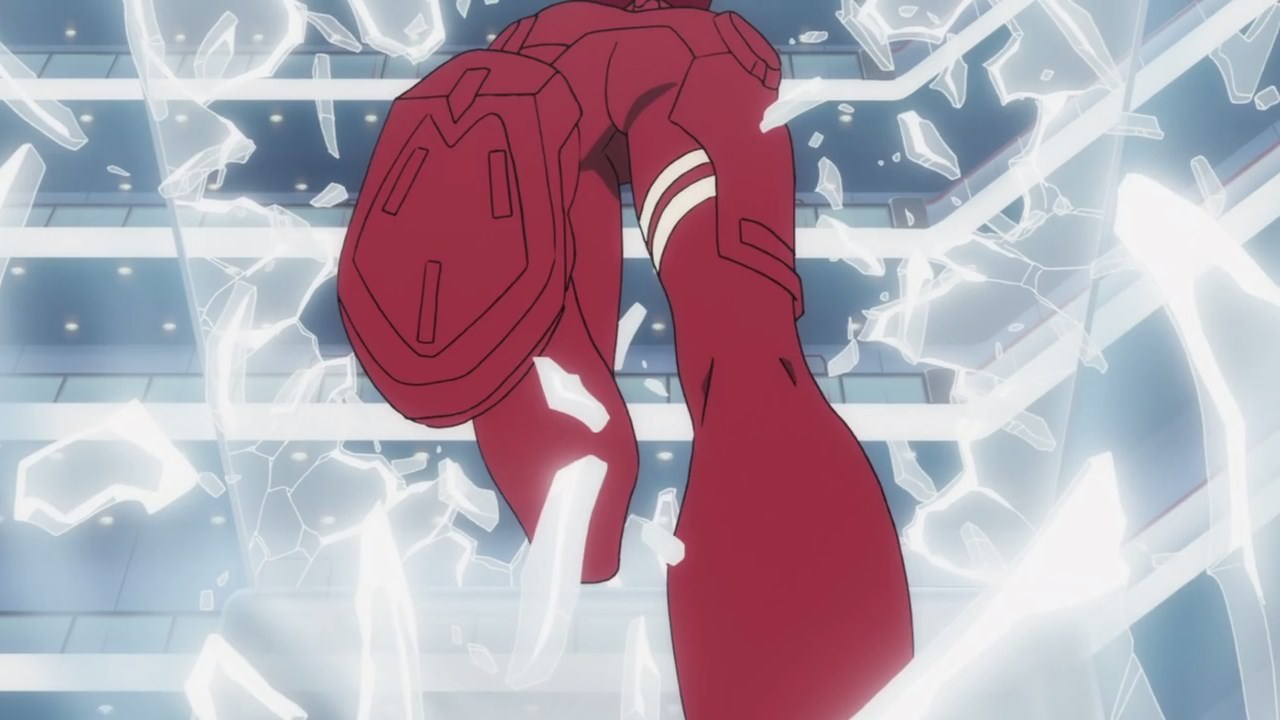 Because of Hiro’s embarrassing revelation, Zero-Two decides to abandon her plans to travel to the front-lines and went straight to Hiro by kicking the glass door.

Well, she borrowed a machine gun to shoot down this heavy-duty glass before kicking it. 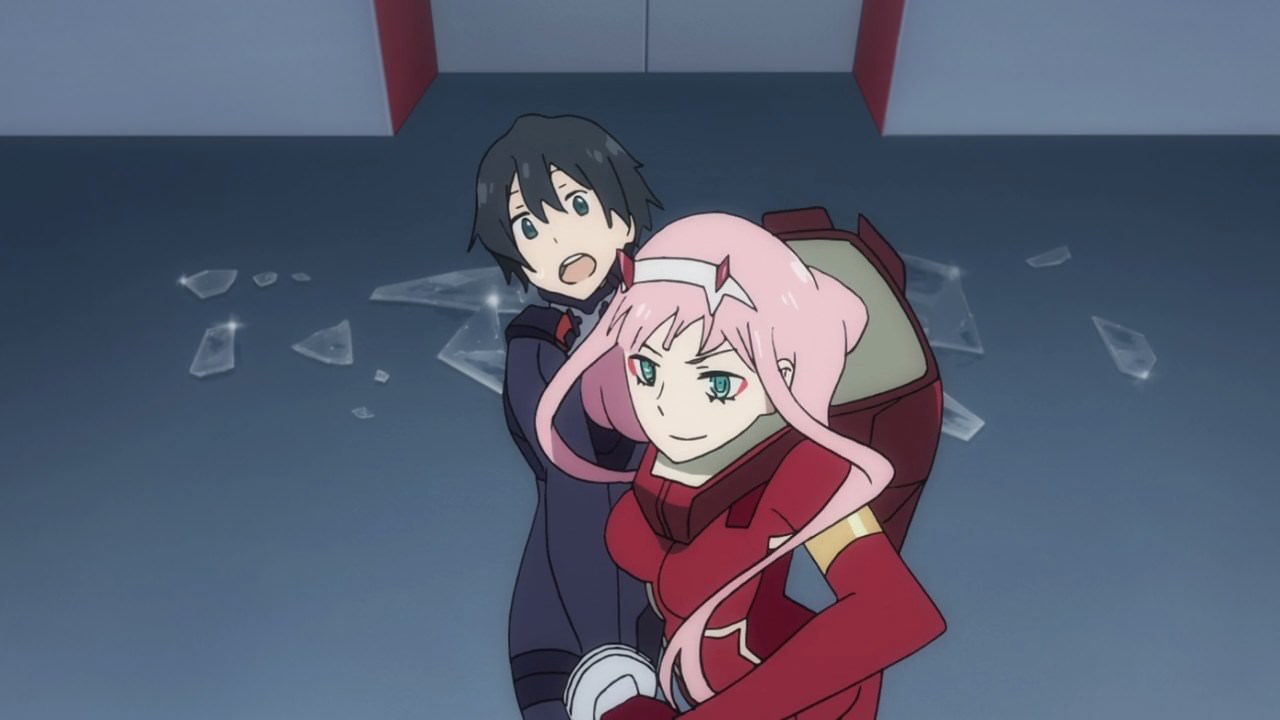 In any case, Zero-Two is happy that Hiro wants to pilot the Strelizia, which is perfect on this occasion because he wants to prove himself that he’s not useless to everyone! 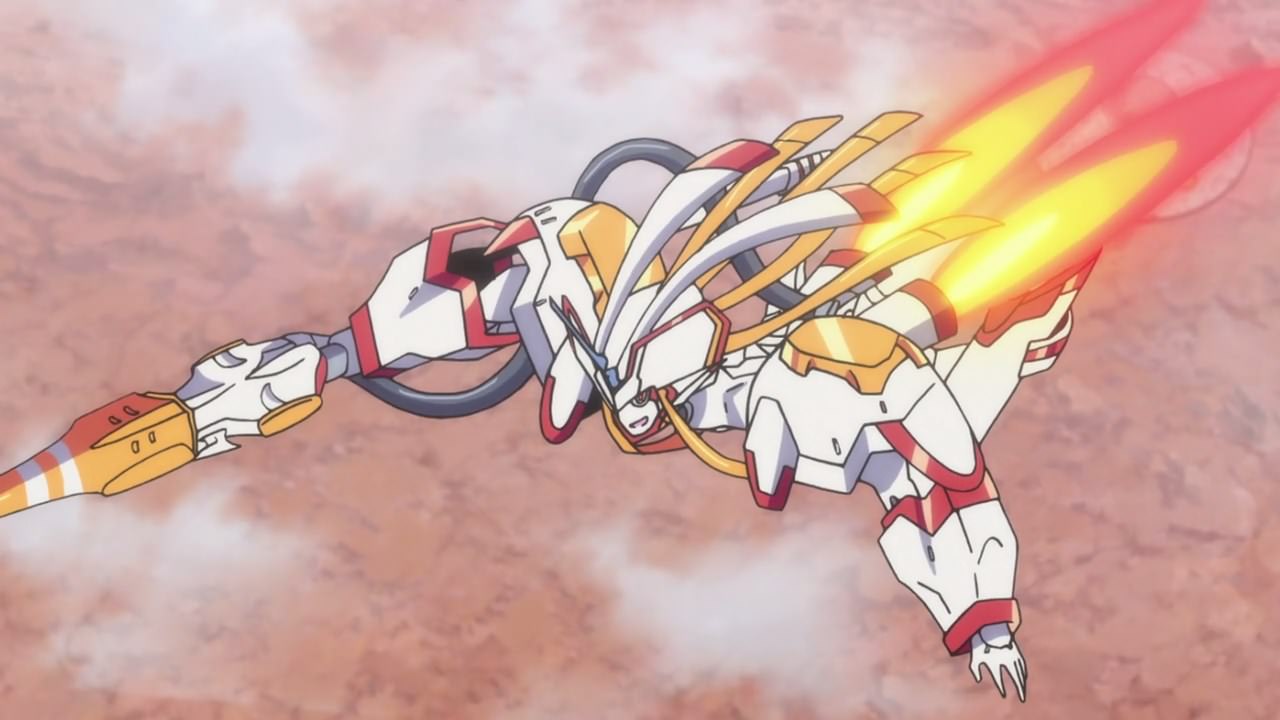 And so, both of them pilot the Strelizia after ignoring some orders. But hey, it’s happy that Hiro is able to pilot this FranXX after the first episode. 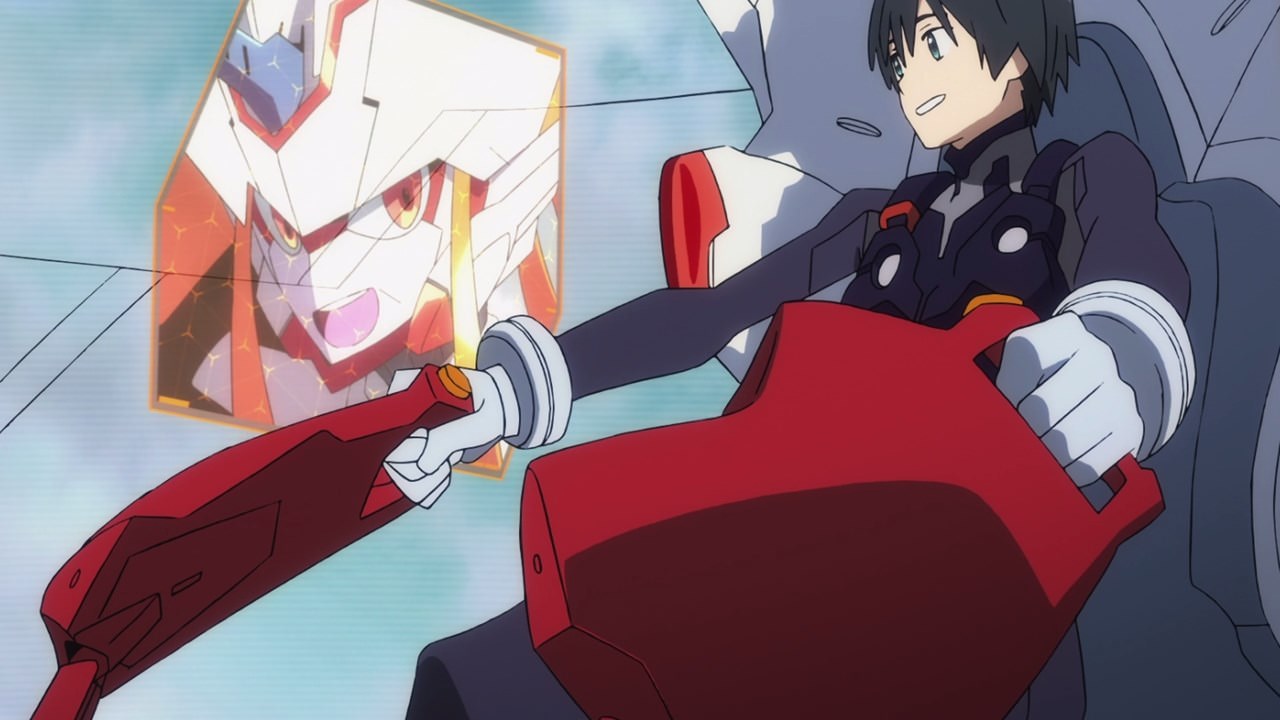 As you can see, he’s really happy about it. Of course, both Hiro and Zero-Two needs to rescue everyone… 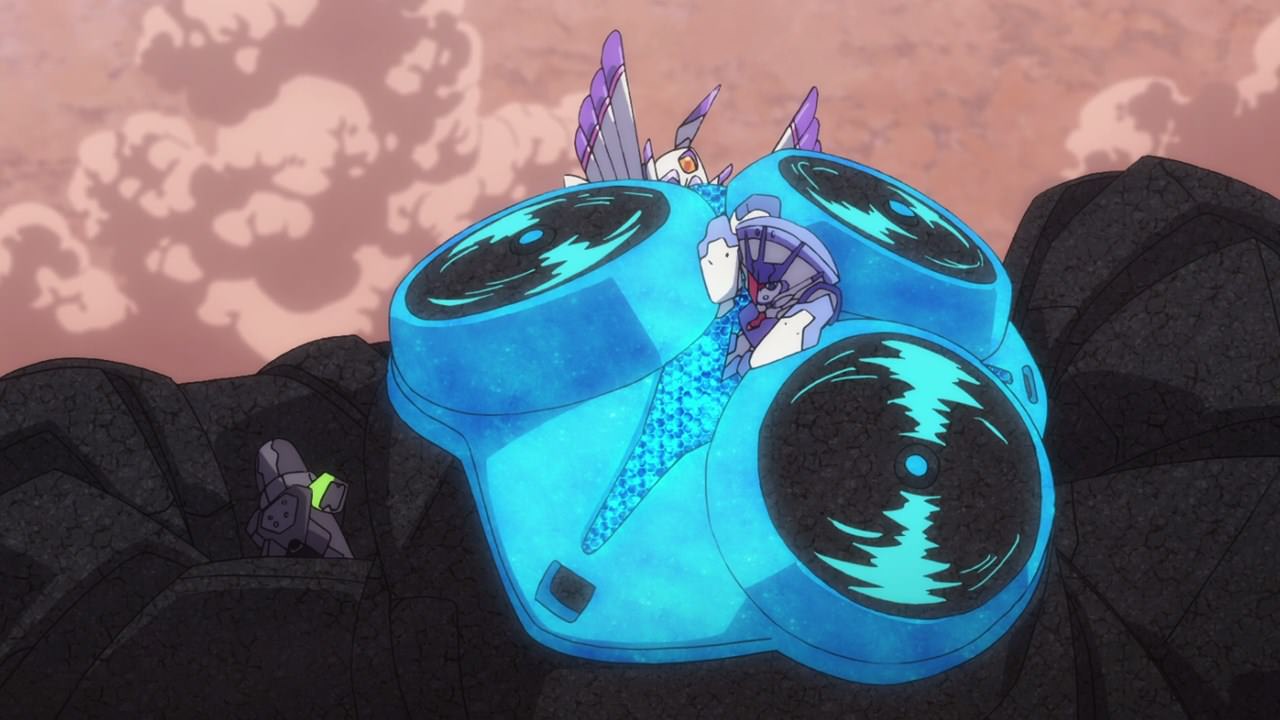 …as Code:015 “Ichigo” and the rest are being pinned down by this worm-type klaxosaur. At this point, they might become a goner if Strelizia didn’t come to their aid in time. 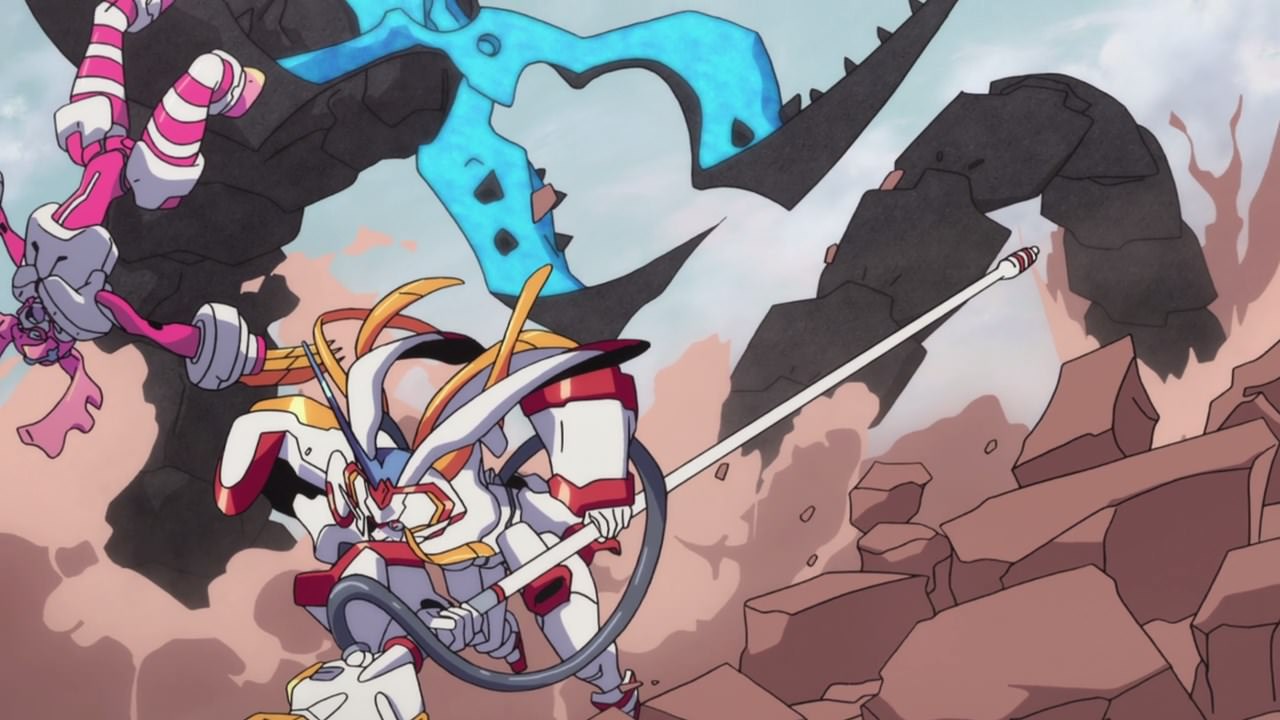 Fortunately for them, both Hiro and Zero-Two have arrived to rescue them yet again. Of course, they need to find the core to destroy the klaxosaur. 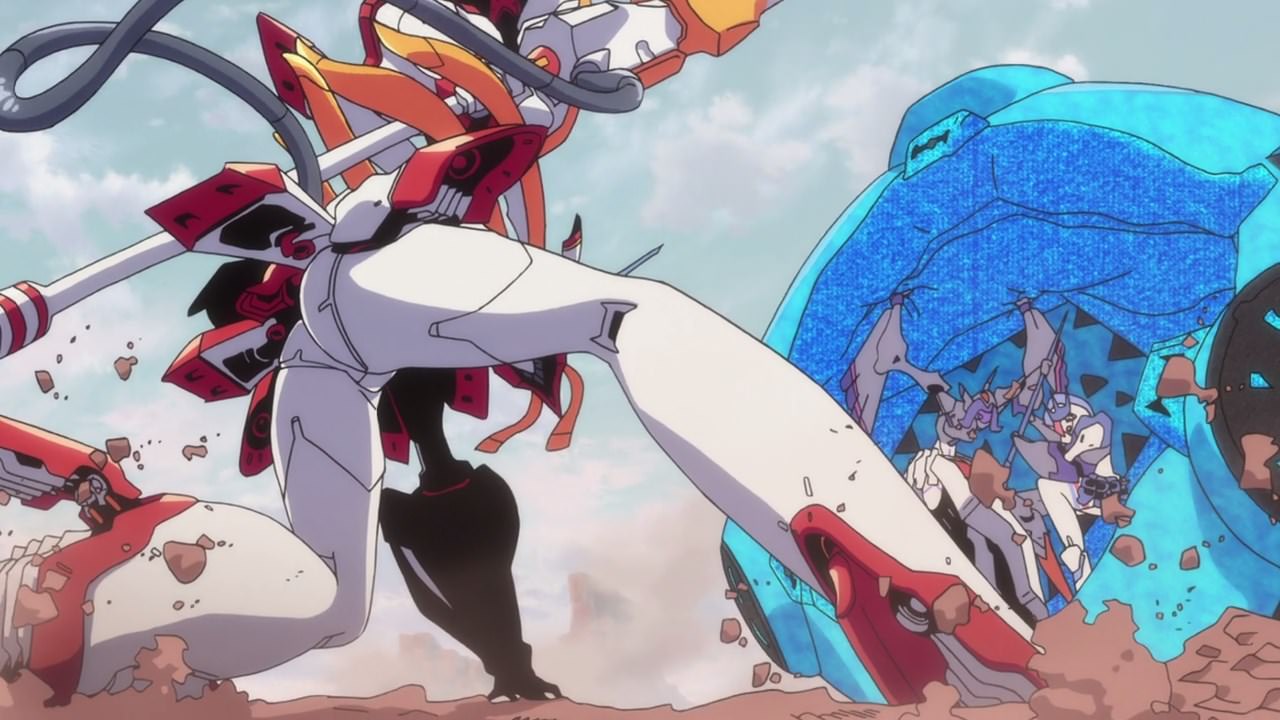 But you know what, the only way to defeat the klaxosaur is to go inside and destroy its core.

Therefore, both Delphinium and Chlorophytum opened its mouth so that the Strelizia can go inside of it. 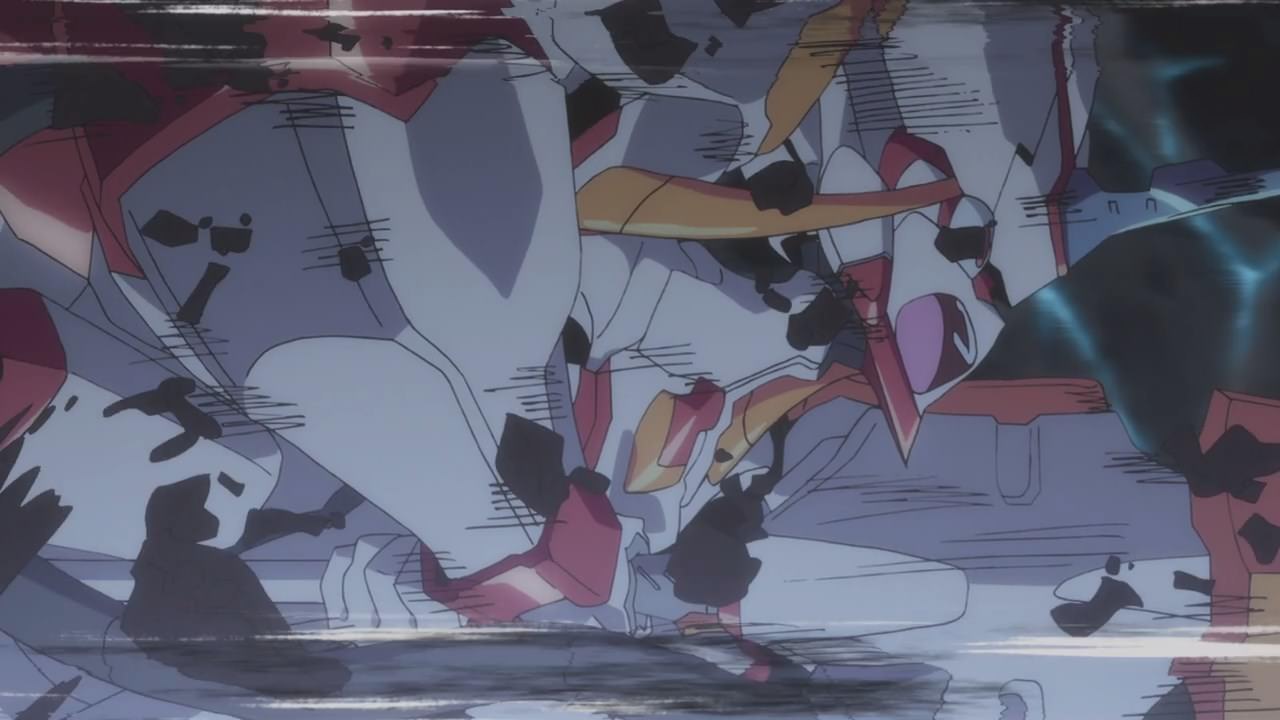 And as you can see, both Hiro and Zero-Two charge their way inside the klaxosaur… 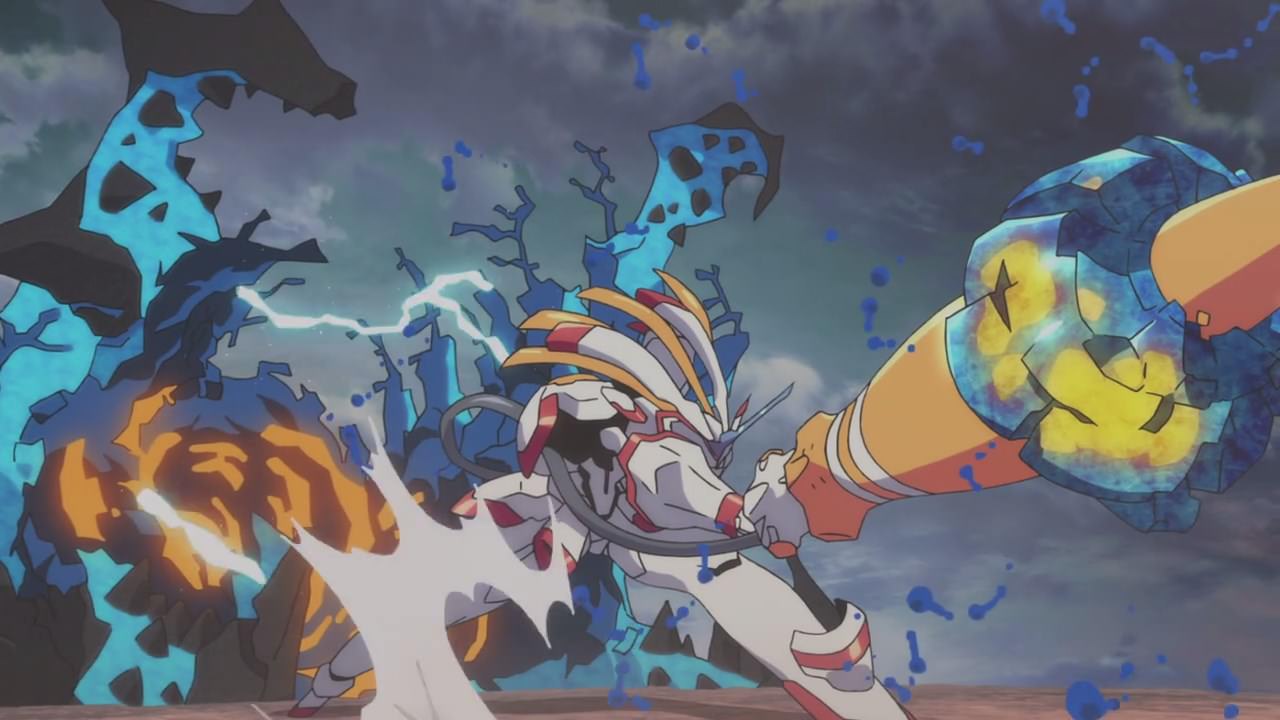 …ending with the Strelizia destroying the core. I have to say that Zero-Two saves yet again on this episode! 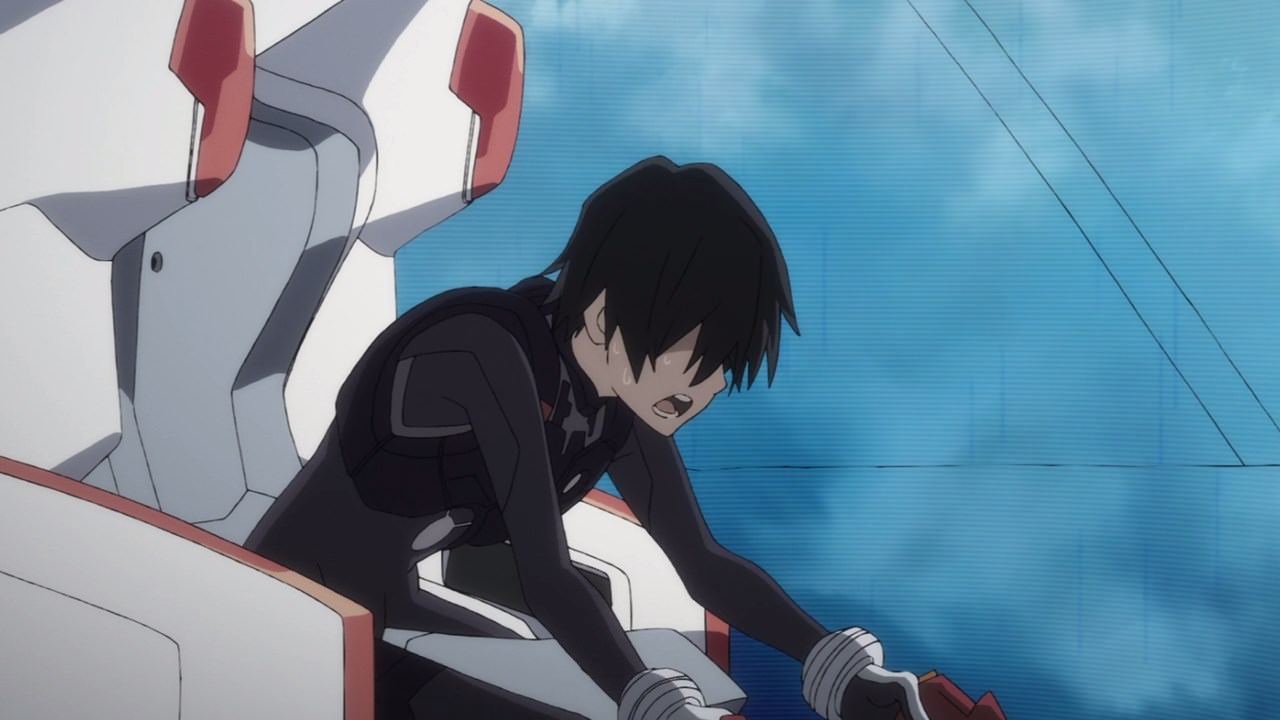 But this time, she’s joined by Hiro as he’s still conscious while keeping his sanity in check. And because of this, Papa and the rest of the council decides to keep Zero-Two and Strelizia in Mistilteinn.

Anyways, I’m glad that Hiro can now pilot a FranXX without any worries. Of course, his road to recovery has just begun and his journey will be a rocky one as Hiro might encounter secrets like the origins of the klaxosaurs, as well as the council themselves as I feel that they’re hiding something.

In any case, I’ll see you on the next episode…

1 Response to Darling in the FranXX Episode #04