A Place Further Than the Universe Episode #06

Posted on February 7, 2018 by benigmatica 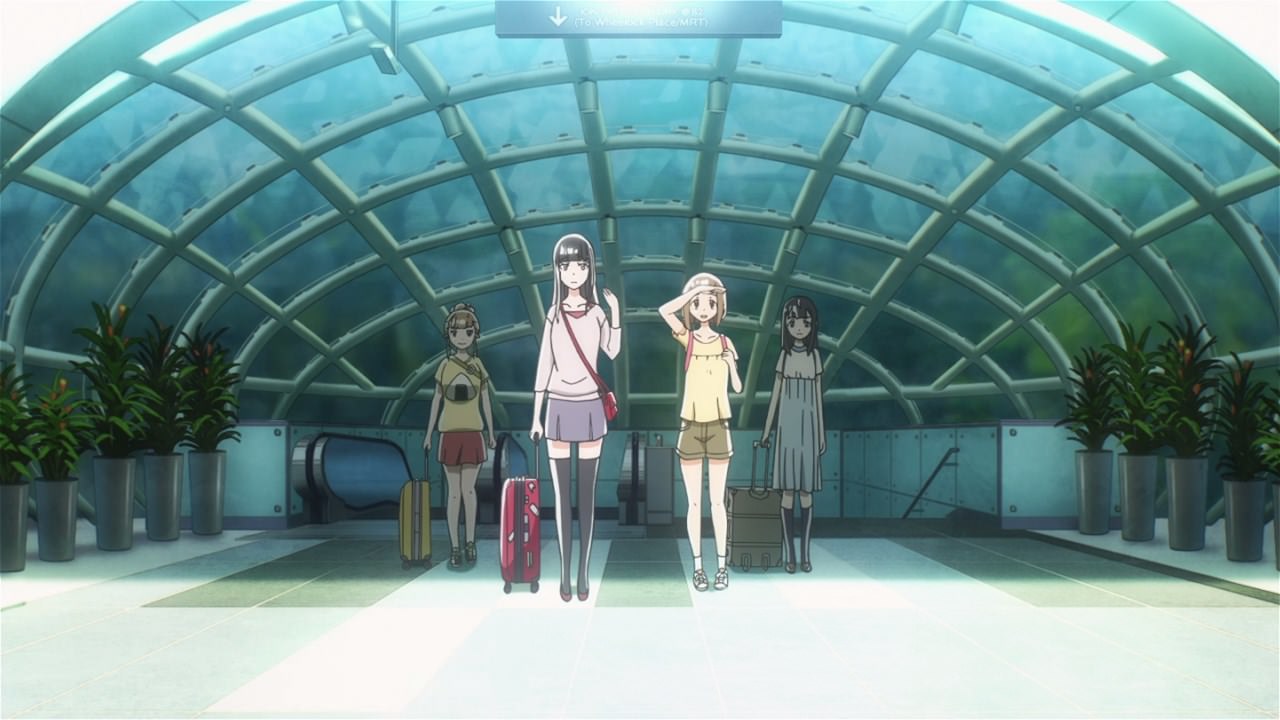 On this episode, the girls are making a stopover to Singapore before heading to Australia. For 3 days and 2 nights, Mari Tamaki and the rest will have fun at the lion city! 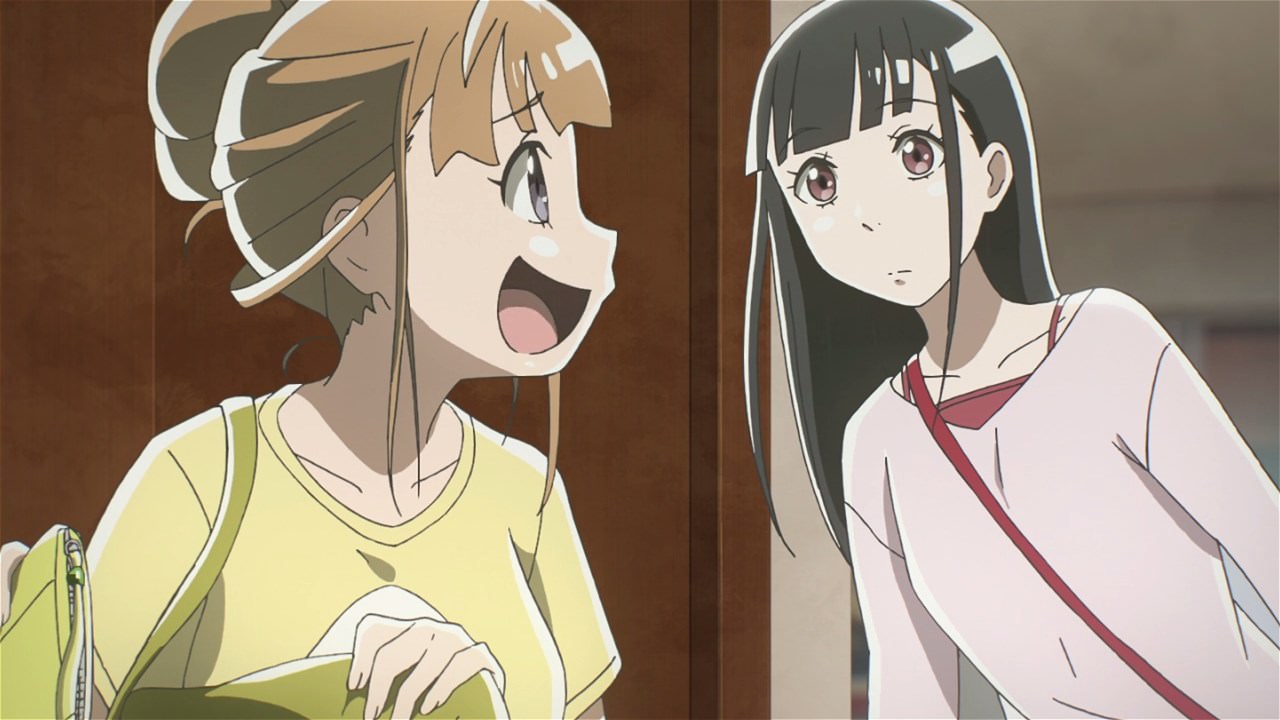 Then again, seems that a certain Hinata Miyake forgot something important inside her purse. Well, even Yuzuki Shiraishi is getting a bit suspicious towards Hinata-chan! 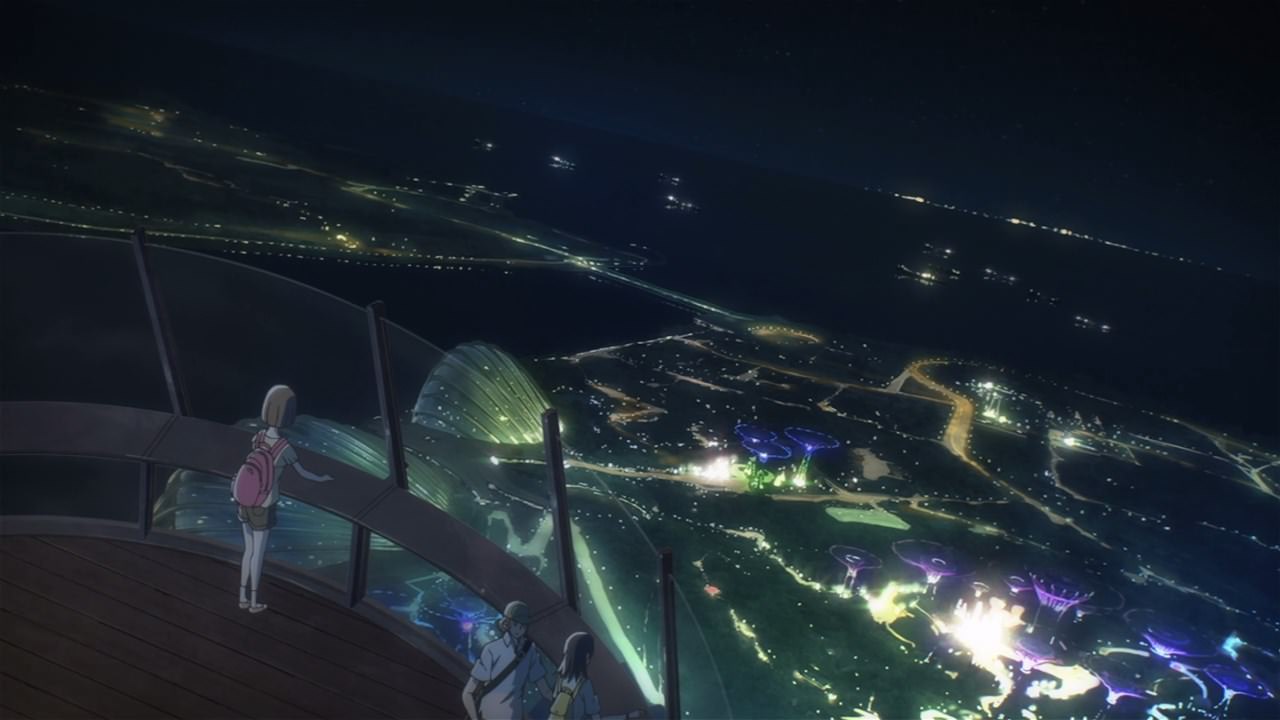 Still, the girls are amazed to see various places from the iconic Merlion statue to recent landmarks like the Marina Bay Sands and the Singapore Flyer.

With that said, they’ll have no worries on staying in Singapore… 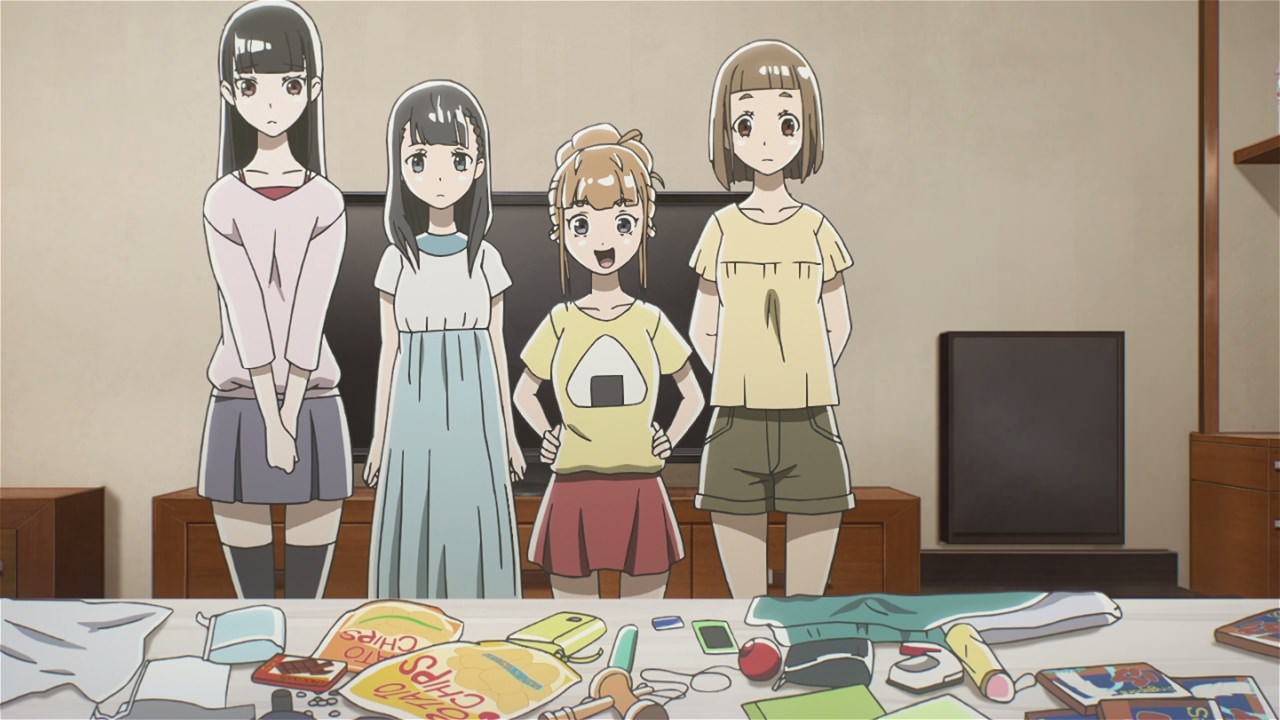 …except that it wasn’t the case as it turns out that Hinata Miyake lost her passport. She and her friends tried finding every nook and cranny on her bag, but there’s nowhere to be found. Of course, Hinata could get a replacement passport at the Japanese embassy, but tomorrow is Sunday so it’s not opened until Monday.

So at this point, Hinata Miyake told the girls that she’ll stay behind until her passport is being taken care of, while Mari Tamaki and the rest will leave to Australia as scheduled. 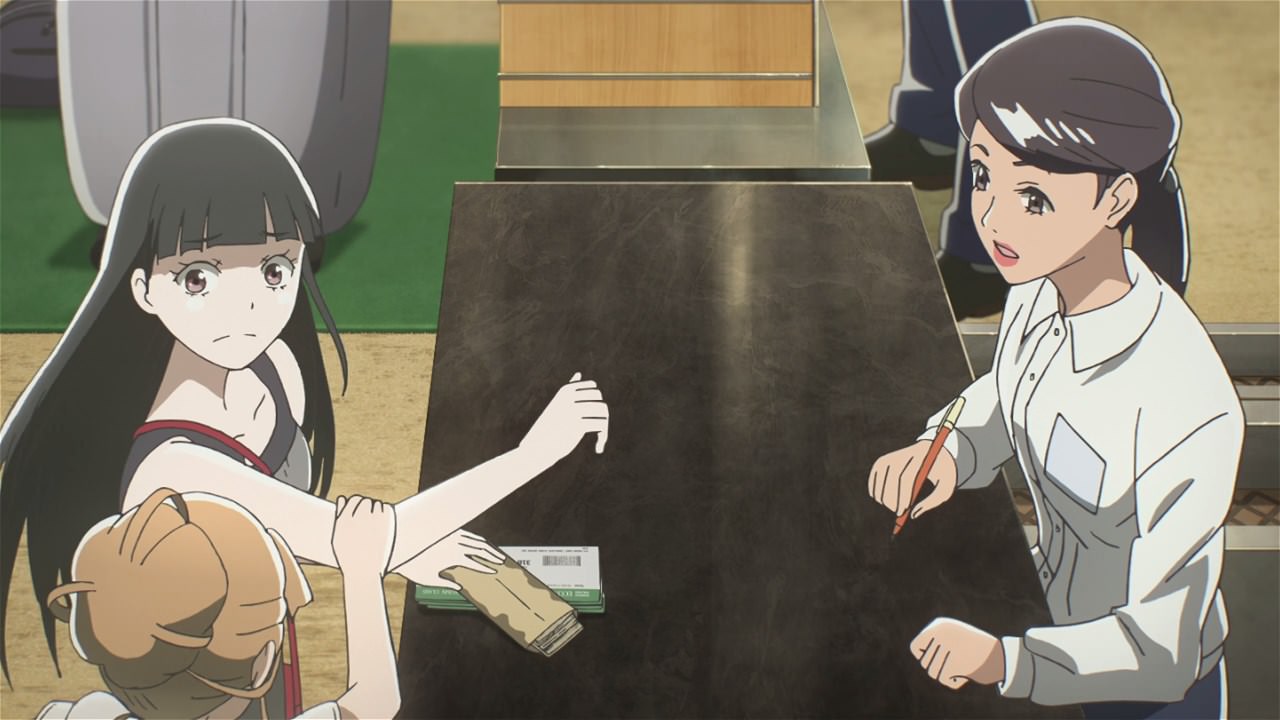 Of course, Shirase Kobuchizawa doesn’t like leaving Hinata Miyake behind as she tries to reschedule the flight… using her money to convert the tickets into business-class which they can reschedule it.

Hinata tries to stop Shirase as she’s okay on staying for another day and catch them up later. 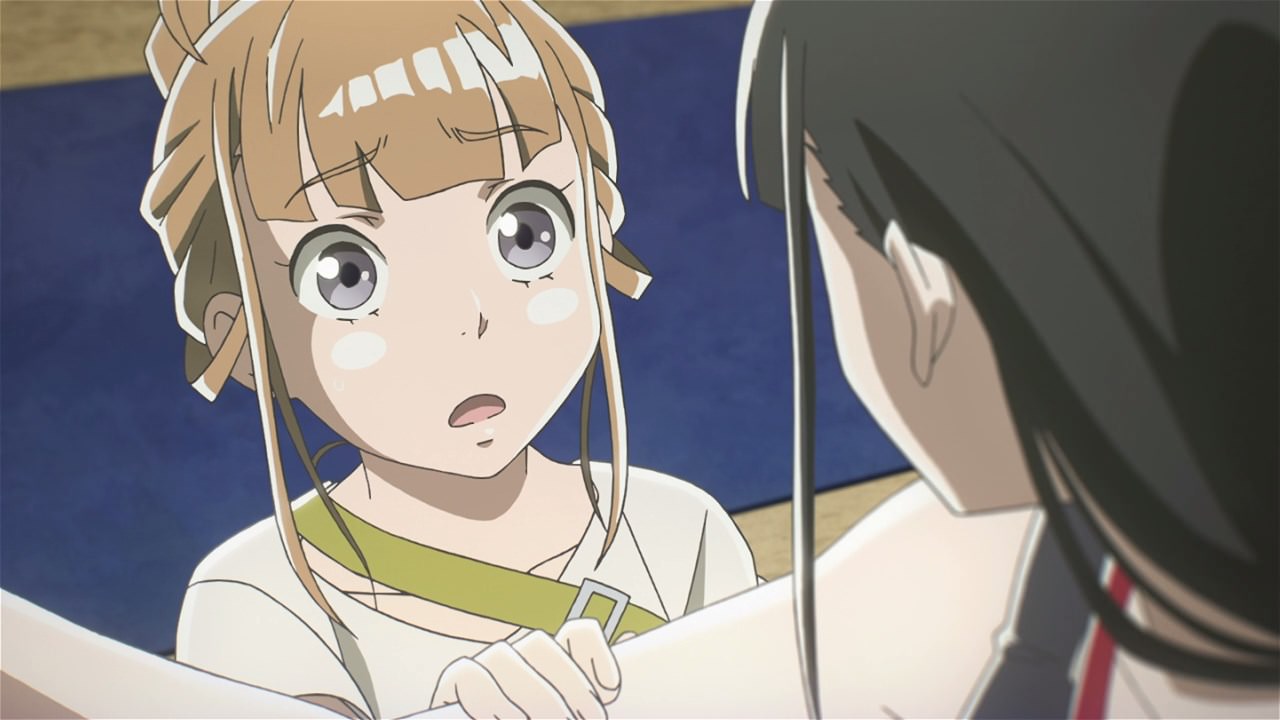 However, Shirase told Hinata that she won’t abandon her as they’ll go to the Antarctica together. Wow, that’s what I call deep friendship right here! 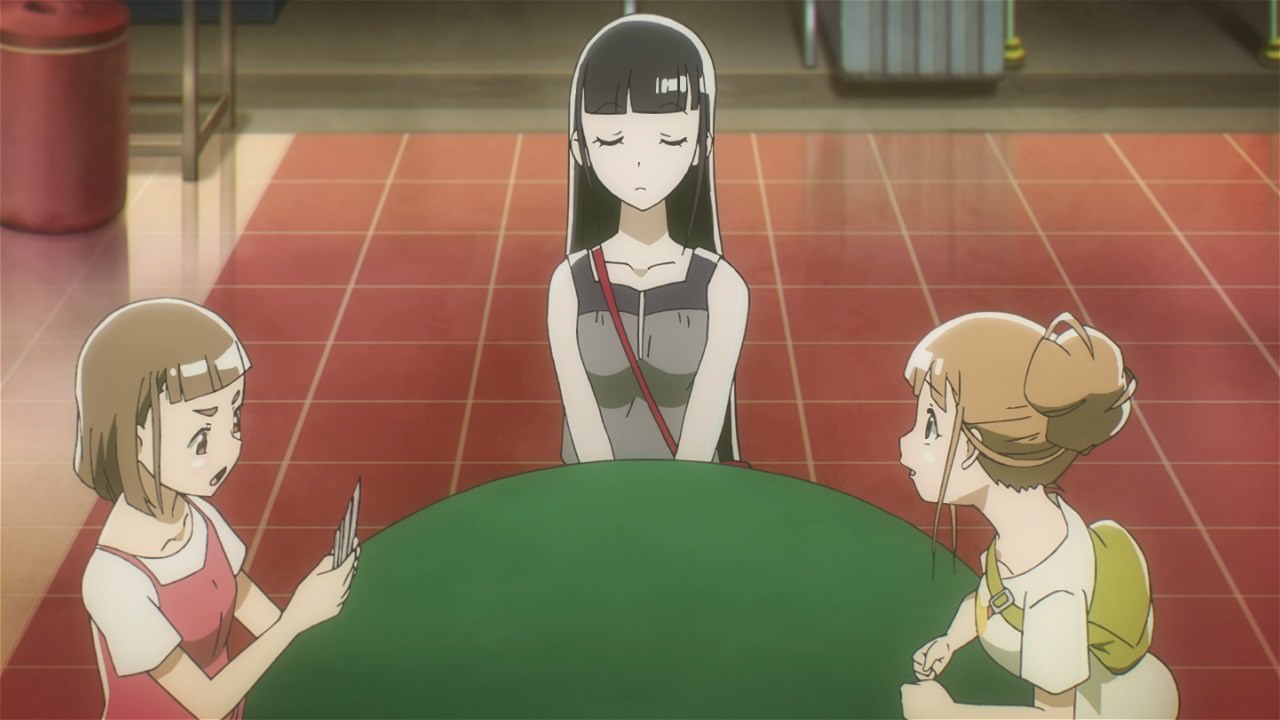 In any case, Shirase Kobuchizawa managed to convert the tickets into business-class and rescheduled the flight for Tuesday.

That’ll give some time for Hinata Miyake to get a replacement passport so it’s all good. 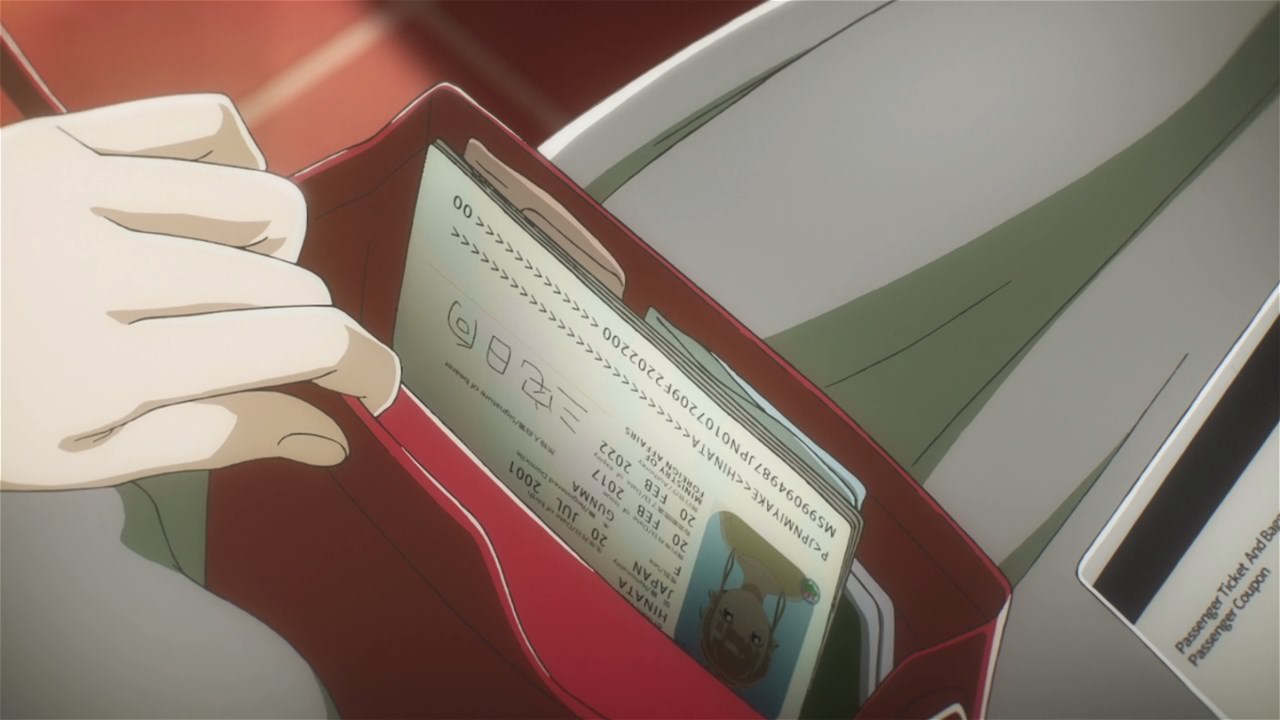 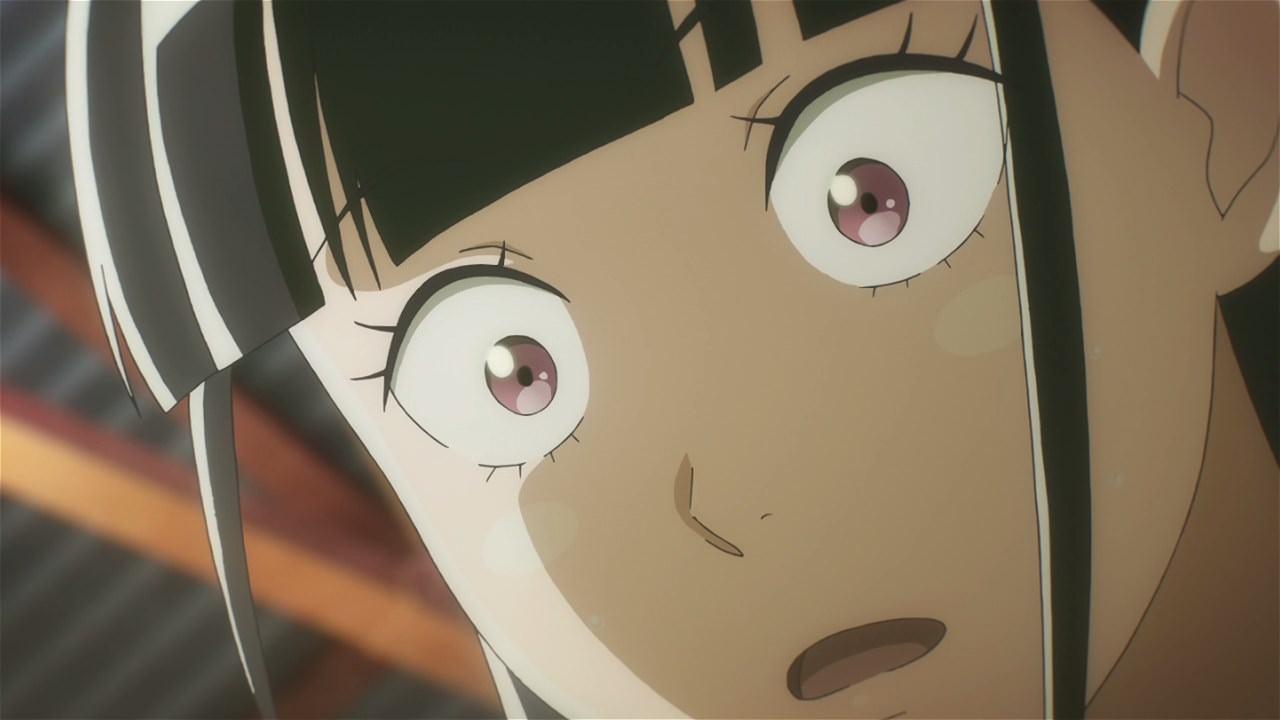 Then again, looks like Shirase is shocked that she has Hinata’s passport all along.

I think the reason why she got it is because Hinata gave the passport to Shirase while tying her shoes. Well, that was silly from Hinata! 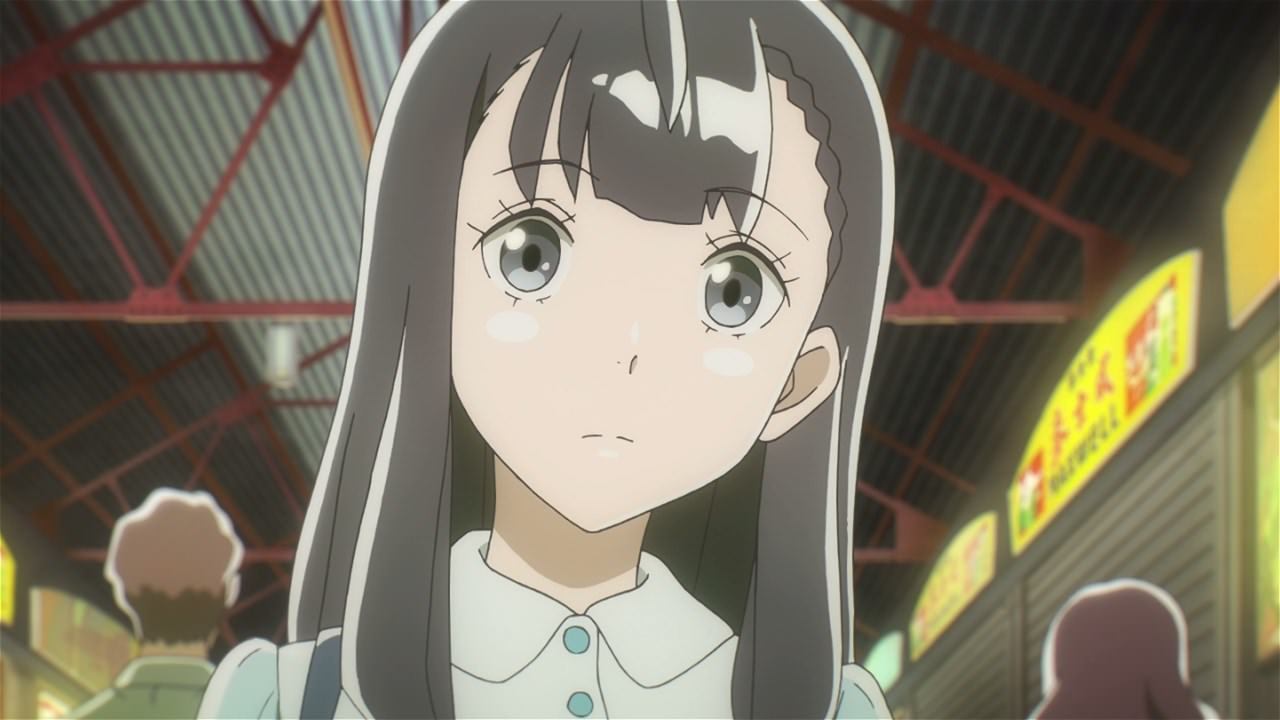 On the other hand, there’s Yuzuki-chan as she’s starting to get really suspicious towards Shirase.

Well, looks like everything that Shirase do worth nothing after all since it turns out that she has Hinata’s passport. Really, that was a silly turn of events! 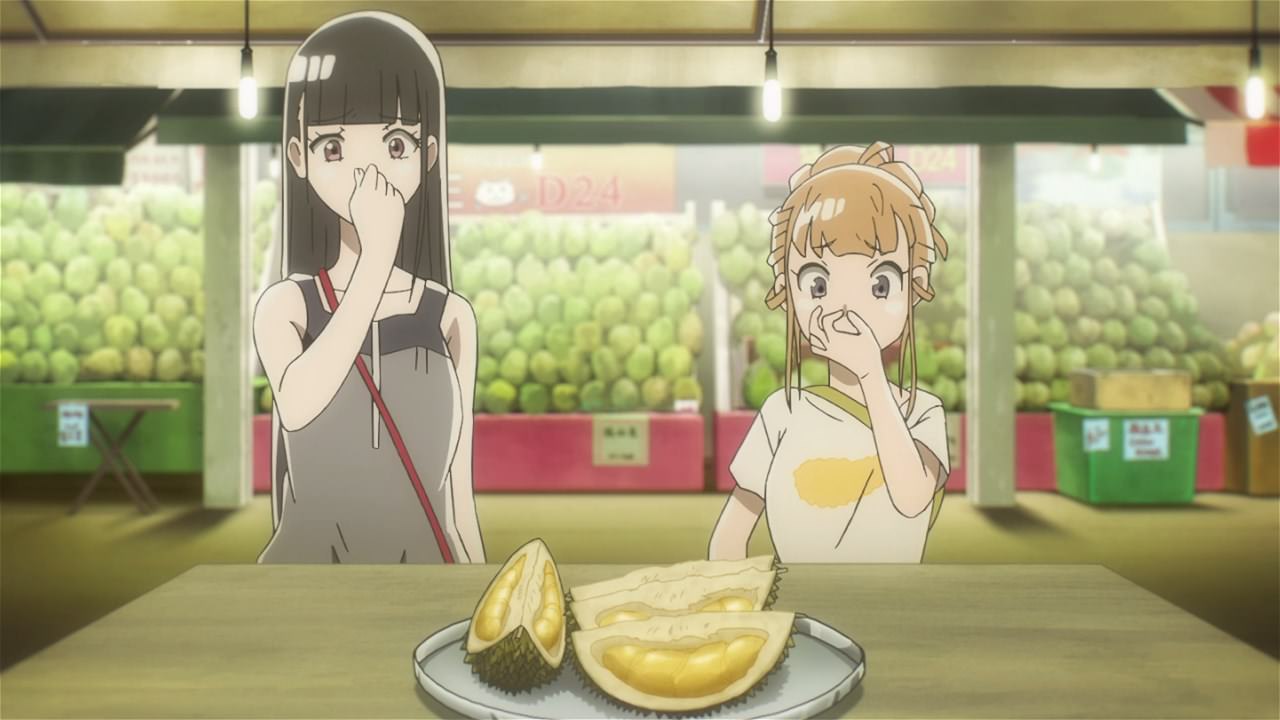 In the end, Hinata Miyake got her passport back from Shirase Kobuchizawa, but we’ll never know if they change their tickets back to economy-class where they’ll leave on Monday as scheduled.

But because of this silly mishap, both Shirase and Hinata will have to eat the durian fruit as punishment… 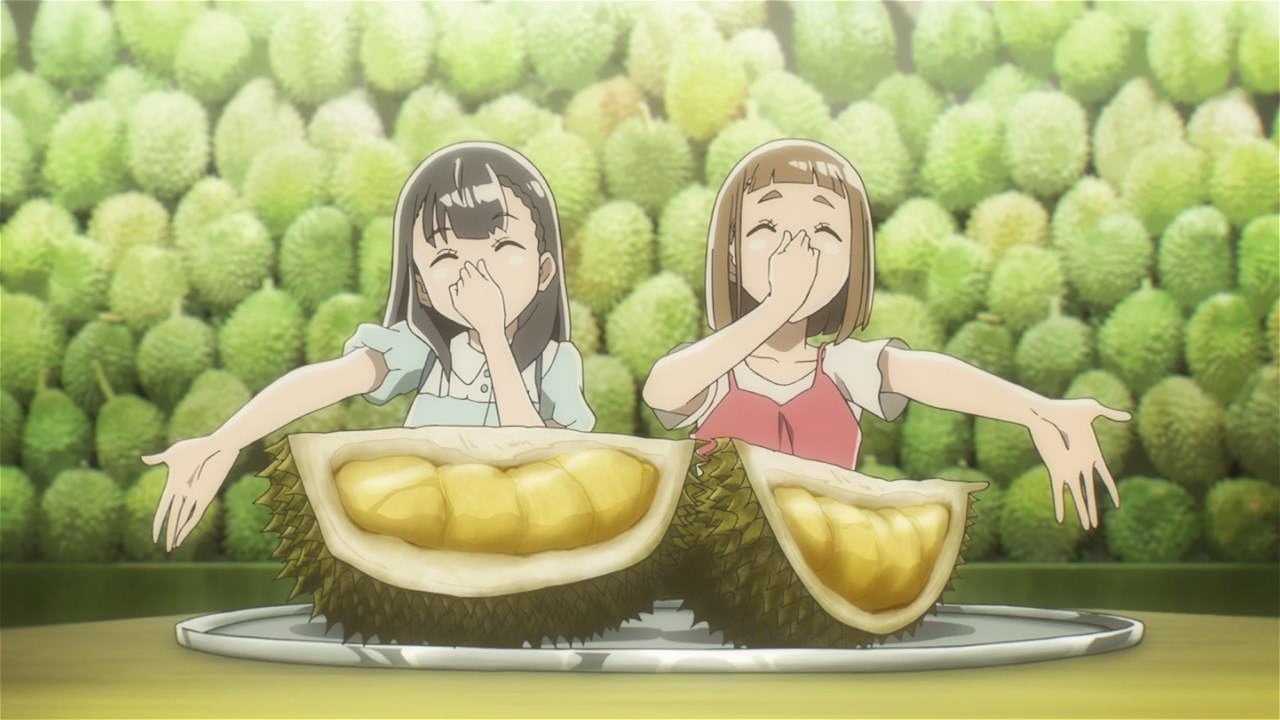 …served by both Yuzuki Shiraishi and Mari Tamaki.

Yeah, they worried for nothing so they gave the king of fruits to both Shirase and Hinata for wasting their time in Singapore. 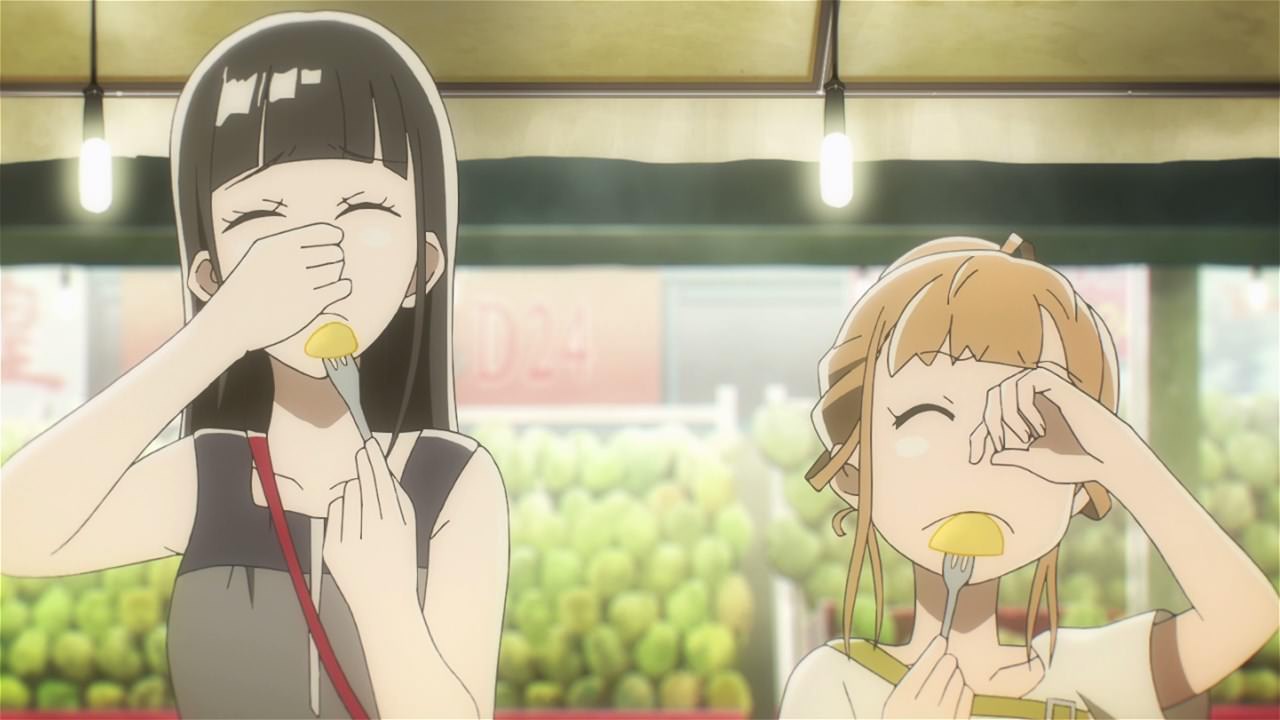 In any case, let’s end this episode as Shirase and Hinata are going to eat durian. Bon appetit!