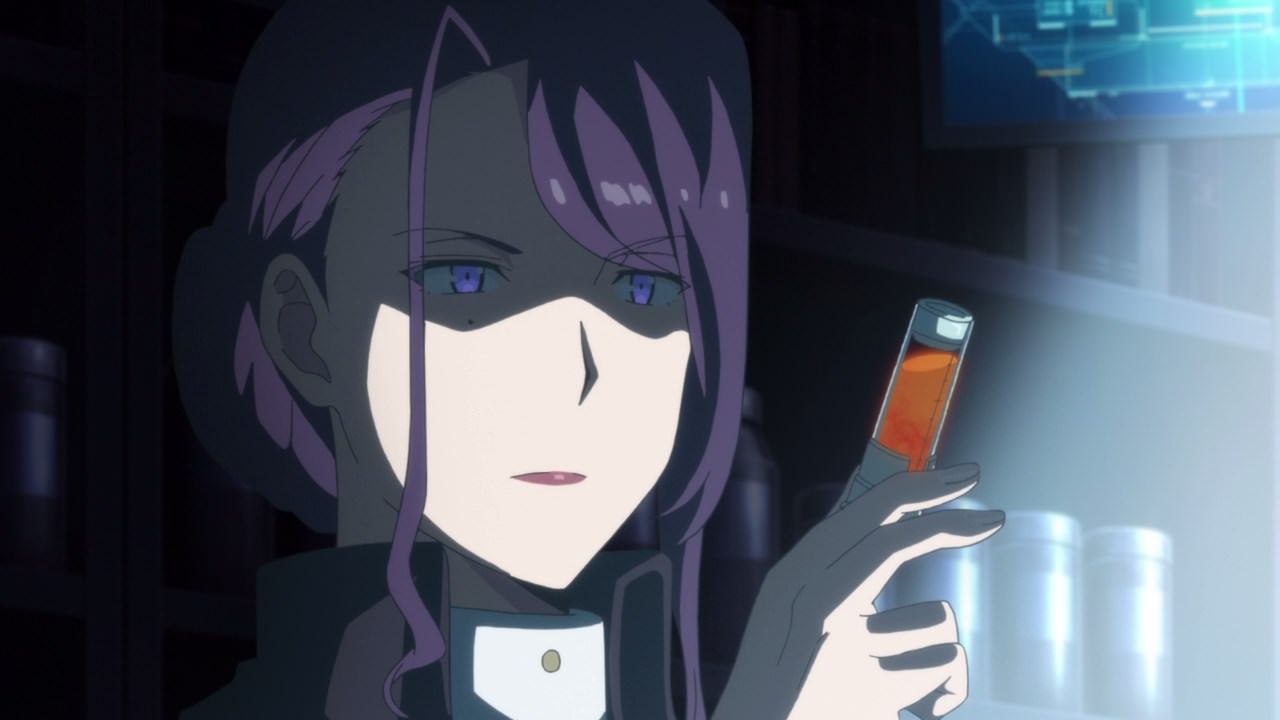 Oh boy, seems that President Yukina Takatsu has a vial of noro and I have a feeling that she’ll inject that to Sayaka Itomi, becoming a powerful human/aratama hybrid that’s better than the elite guard… or so she claimed. 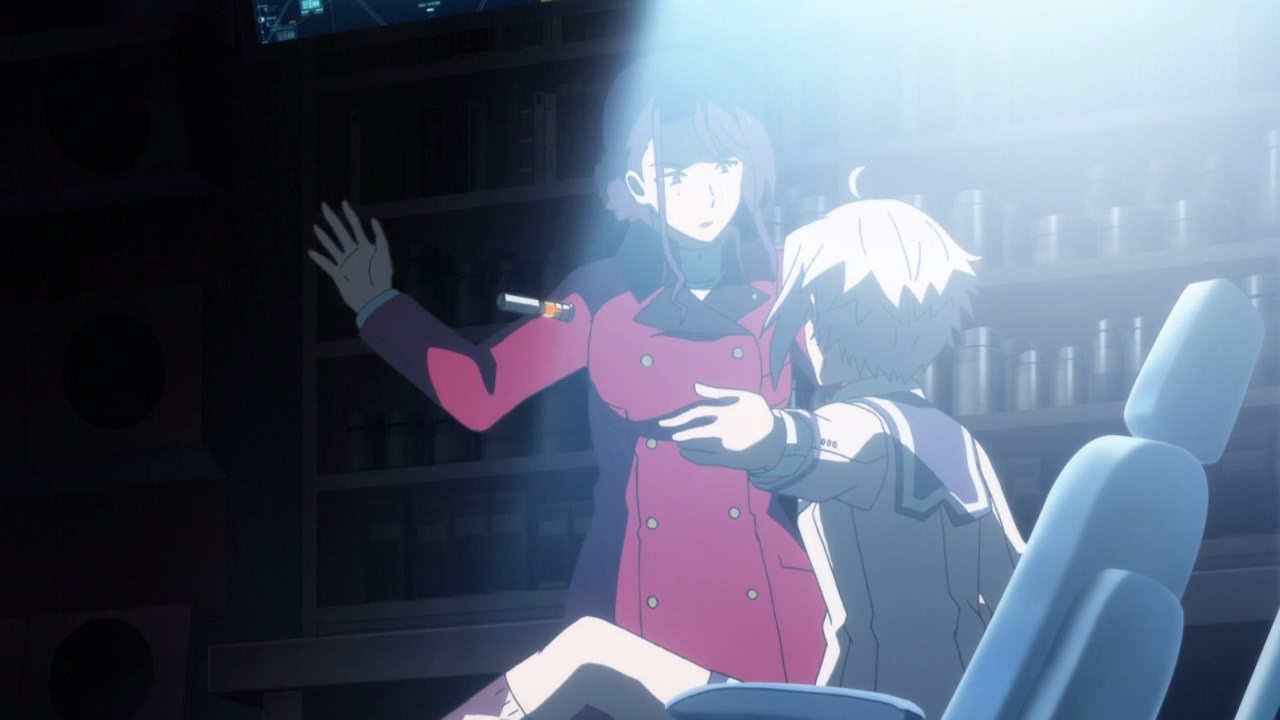 However, Sayaka defied President Takatsu’s orders as she swatted the noro away from her and left Renpu Academy.

Glad that Sayaka Itomi ran away from Yukina-san because her obsession with Yukari Origami might put her into danger! Then again, she might get captured again… 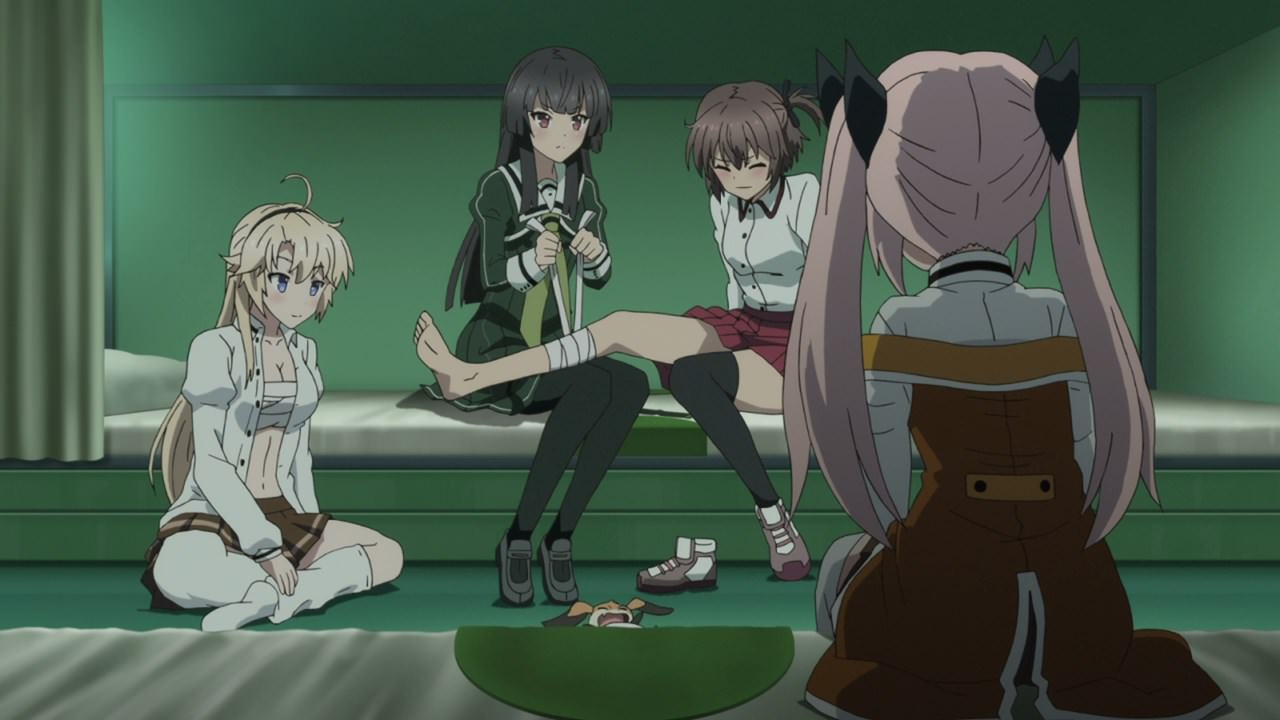 Meanwhile, Kanami Etou and the rest of the girls are inside the submarine which was owned by one of Mokusa’s important person called FineMan. I wonder what this FineMan person is? 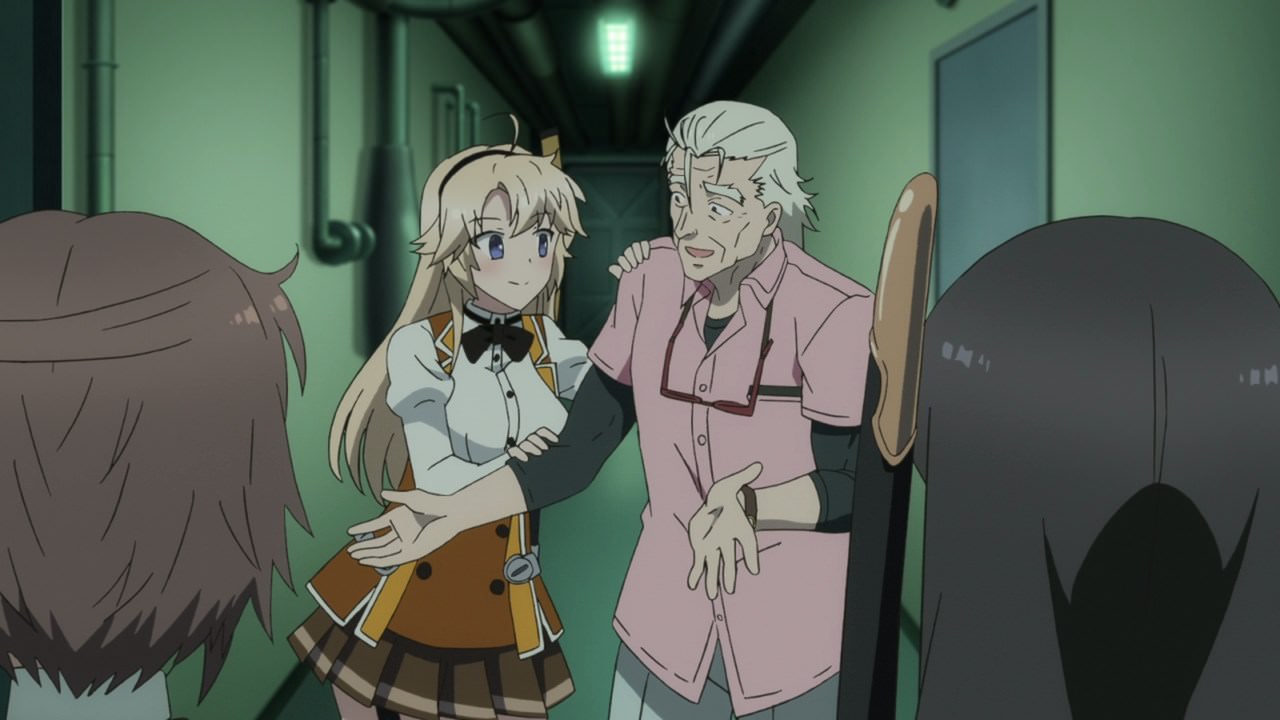 Turns out that FineMan is actually Ellen Kohagura’s grandfather Richard Friedman who’s also the inventor of the S Equipment using noro as its source of power, although it was Yukari Origami who perfected it after the Great Disaster at Sagami Bay from 20 years ago.

But anyways, Richard Friedman suspected Yukari Origami’s activities regarding the use of noro and so he formed Mokusa in order to stop the Origami family from achieving their goals. 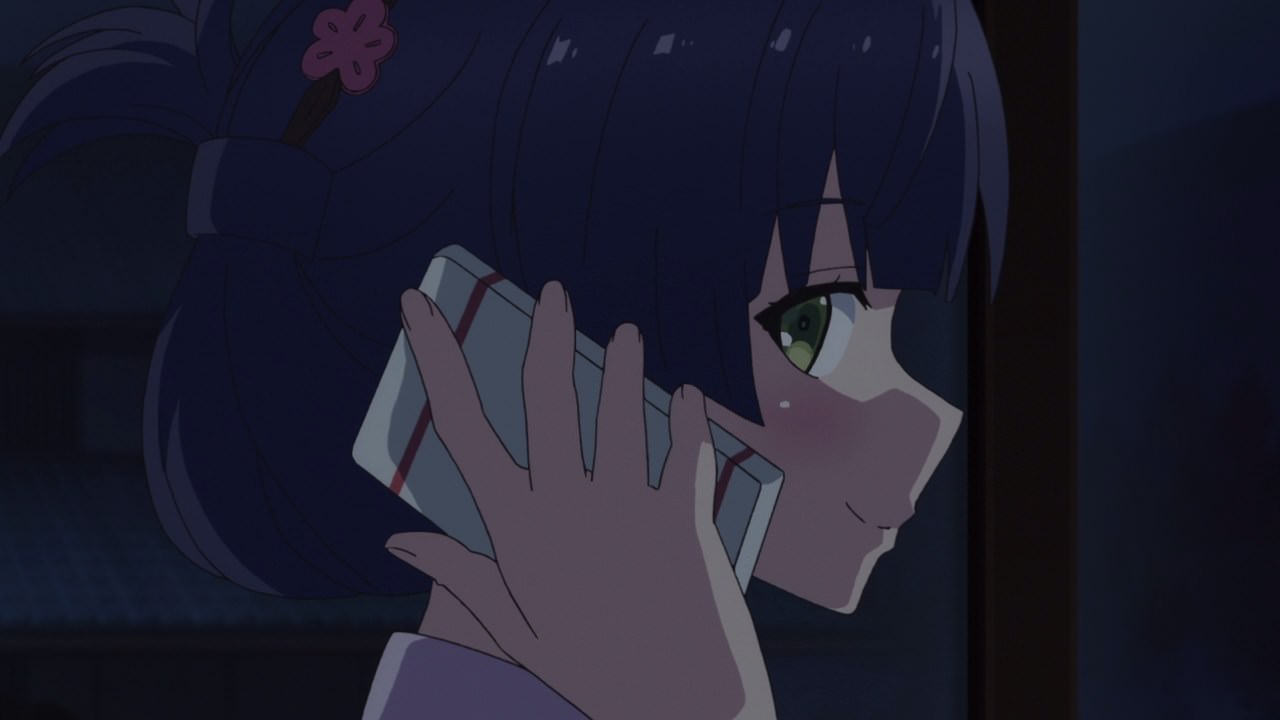 Now let’s go back to Tokyo where Mai Yanase received a call from Sayaka Itomi as she wanted to say hello to her new friend. 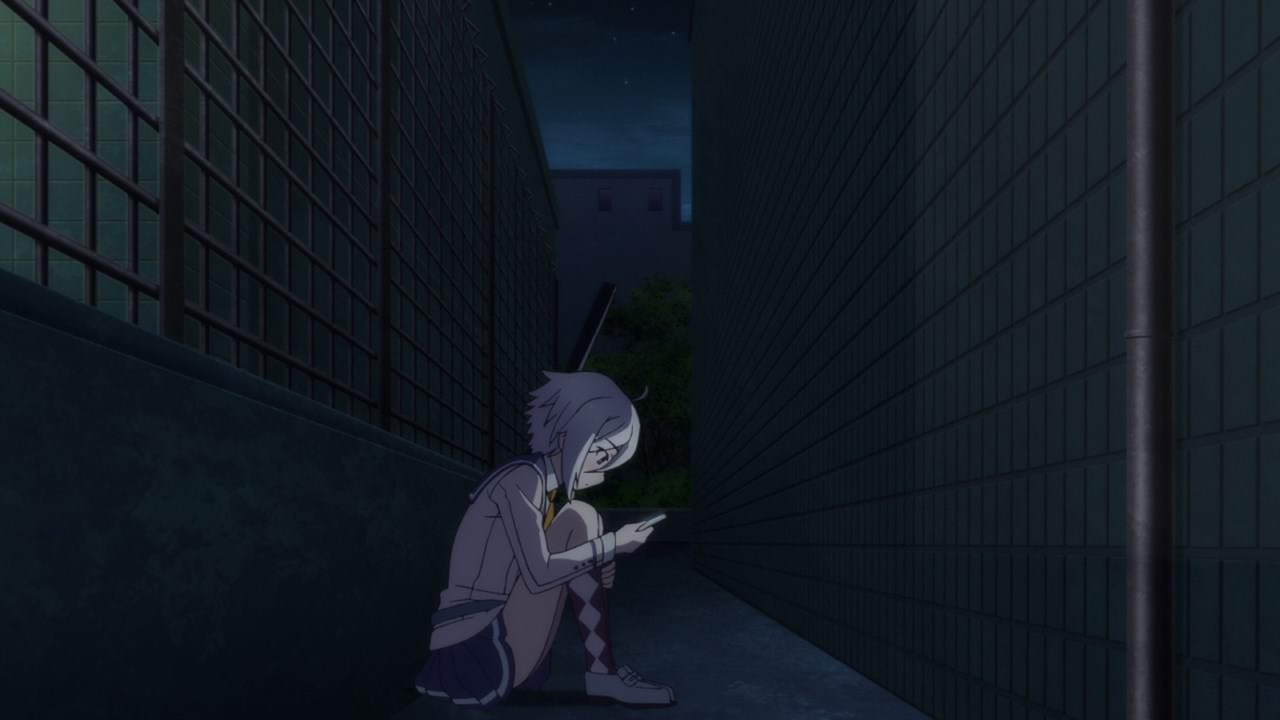 But you know what, I think Mai-chan should rescue Sayaka because she might get captured by her fellow students from Renpu Academy… or even the elite guard at worse. 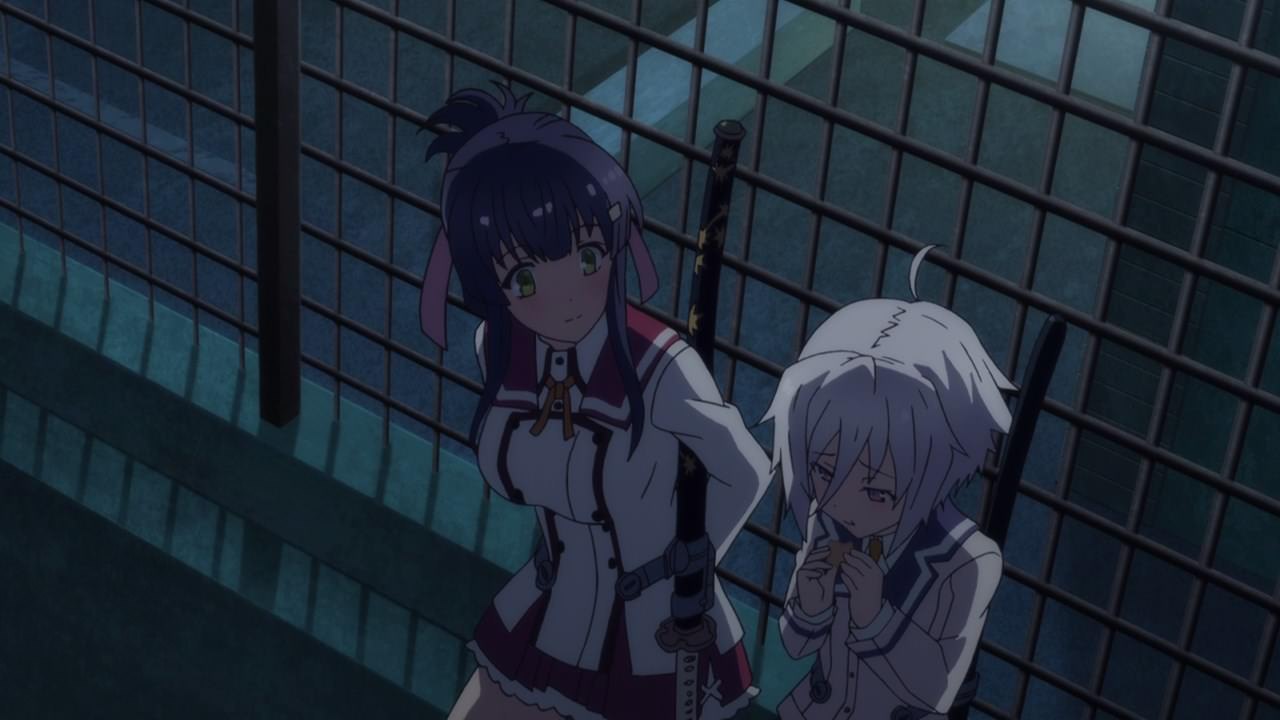 Fortunately, Mai Yanase managed to find Sayaka Itomi and gave her some cookies to eat.

Yeah, seems that Sayaka is fond with Mai’s home-baked cookies that she wants to stay with her forever. 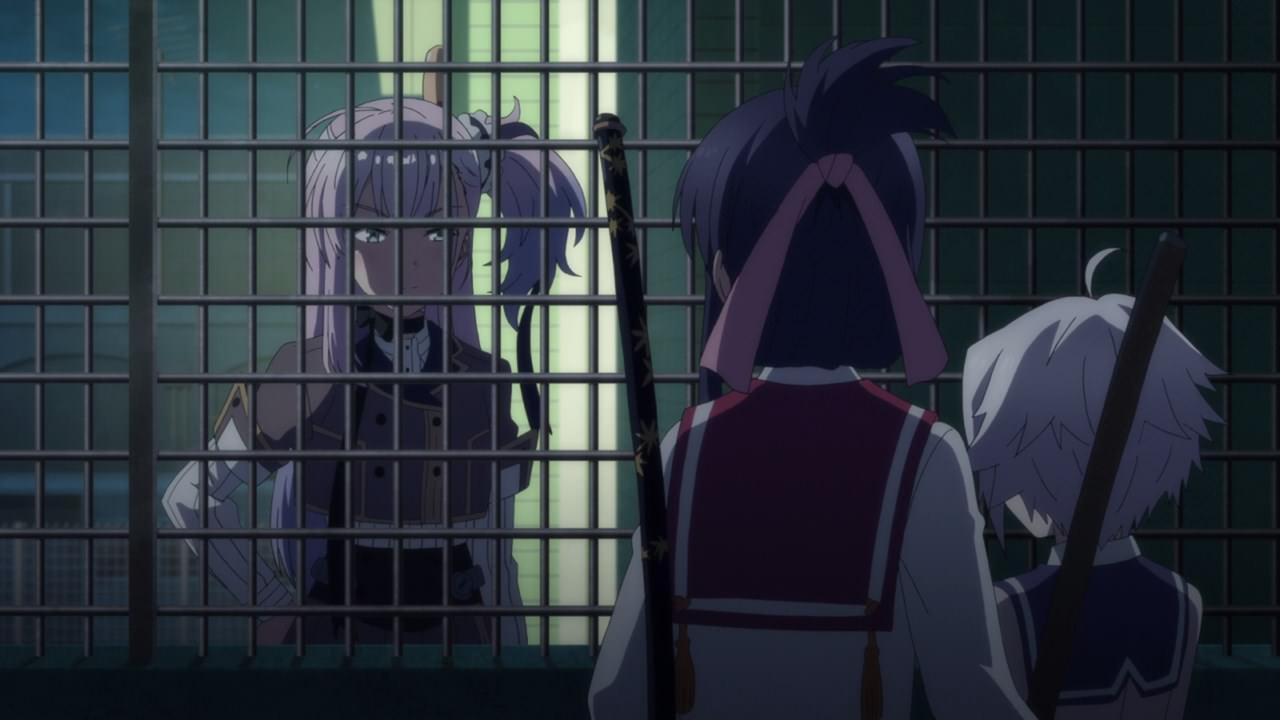 However, their happy reunion is cut short when an elite guard named Yume Tsubakuro appeared in front of both Mai-chan and Sayaka.

By the way, I have to tell you now that Yume Tsubakuro is very dangerous that if you encountered this elite guard, there’s only one thing to do… 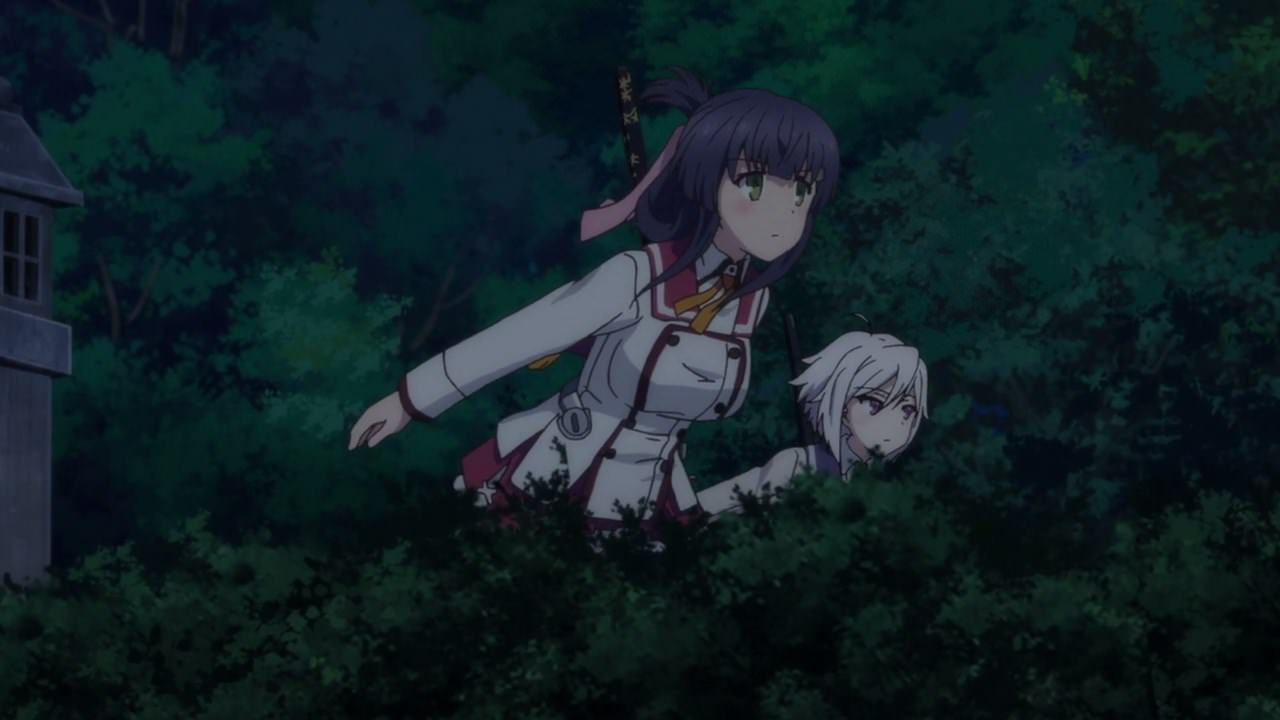 And that is to run away from Tsubakuro as fast as they can because fighting her will be suicidal. C’mon, Yume is the most deranged elite guard that they’ve encountered. 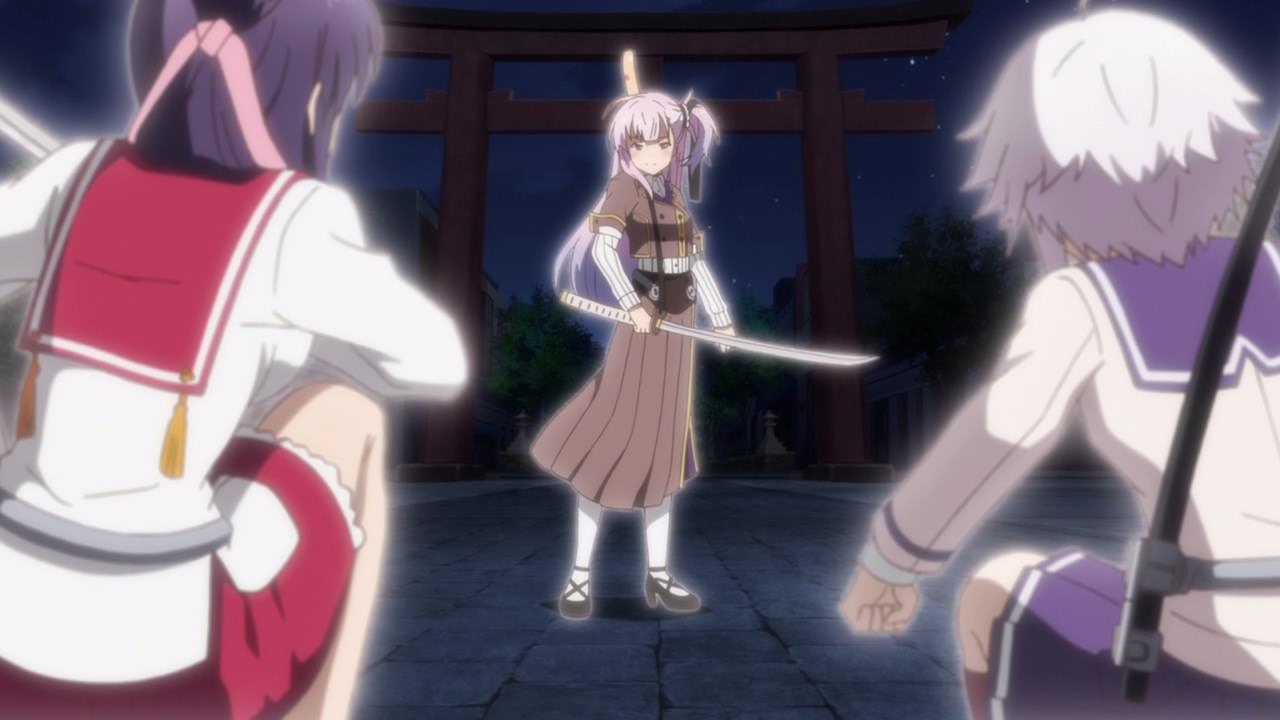 Unfortunately, Sayaka and Mai couldn’t run away from Yume Tsubakuro because she’s in front of them. I guess Yume is faster than them! 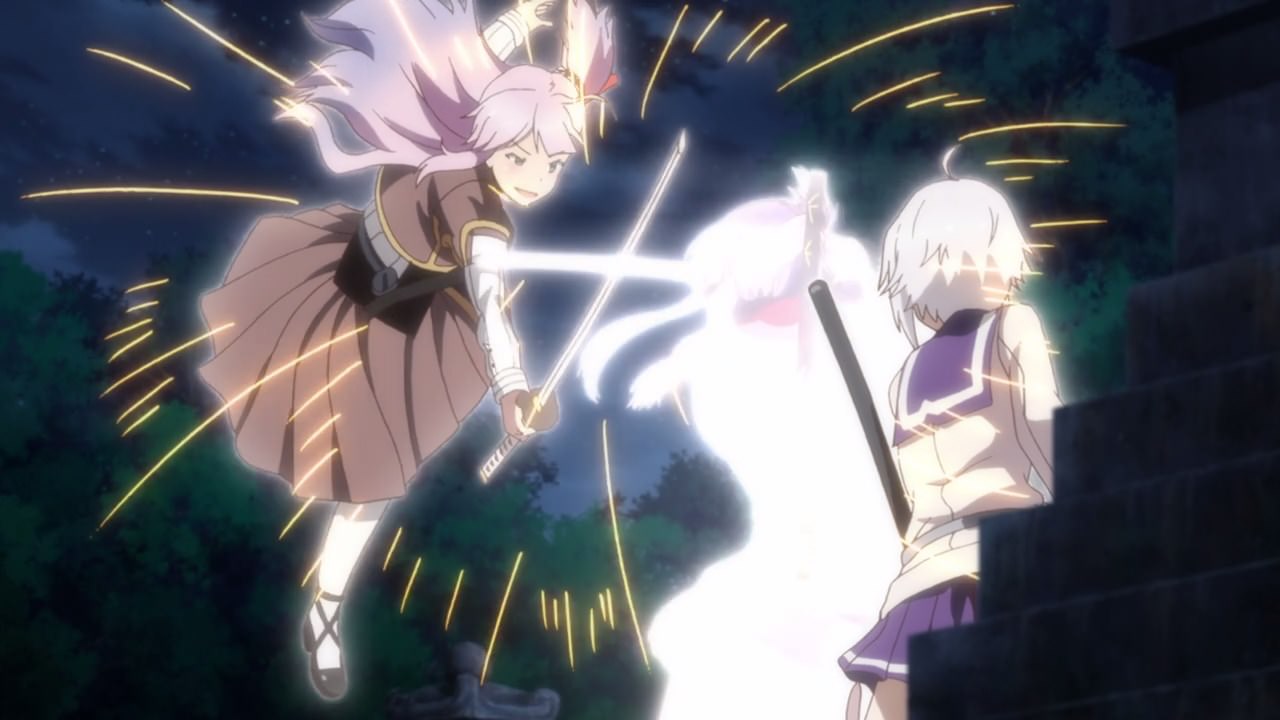 Well, there’s no other choice but to fight Tsubakuro as Mai Yanase goes first as she protects Sayaka from being cut by this insane elite guard. 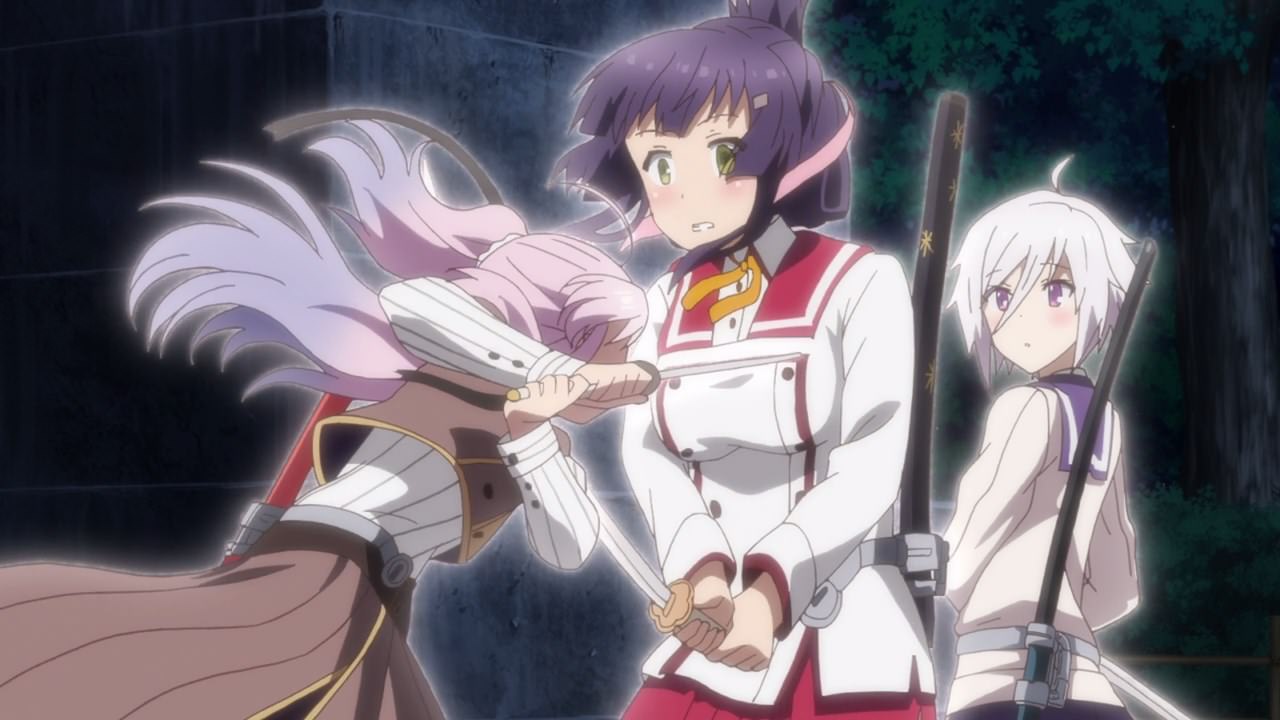 However, Mai Yanase couldn’t hold off Yume Tsubakuro as she got stabbed by Yume’s katana…

…and kicked her out. Y’know, they should have ran away from Tsubakuro using their jin’i instead of running on foot! 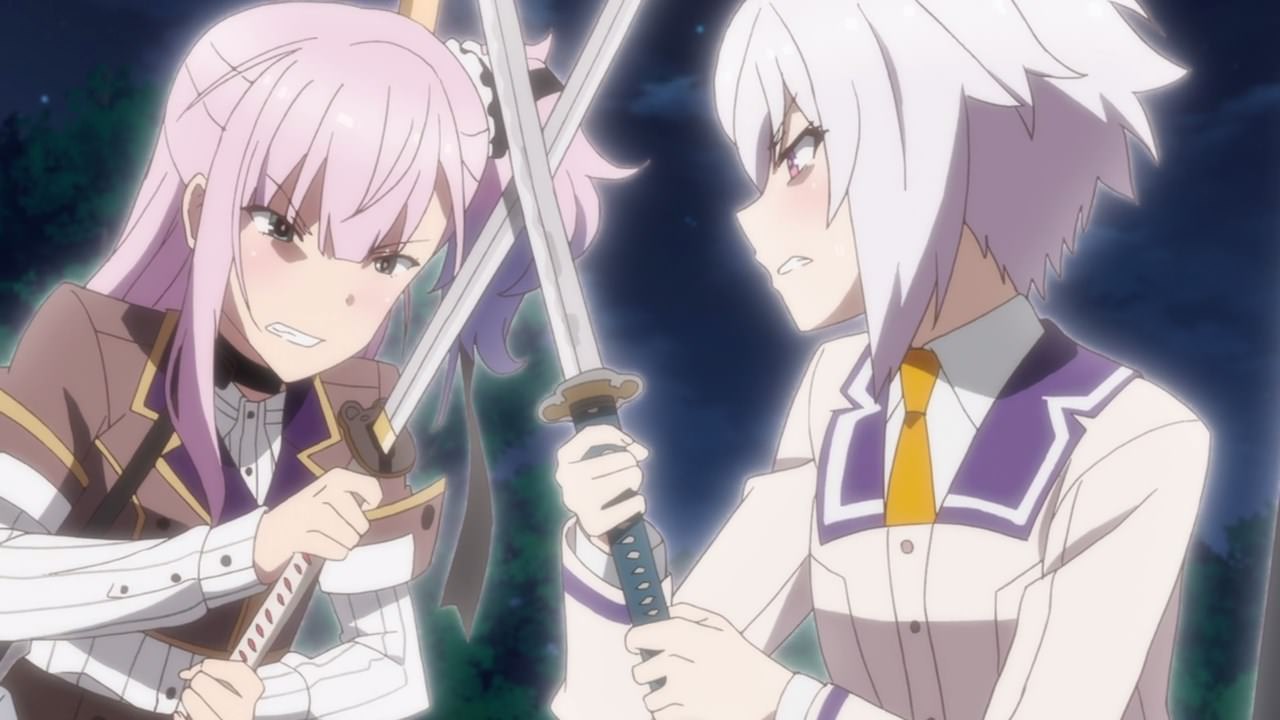 Next up, it’s Sayaka Itomi as she’s angry that Mai Yanase got hurt so she wants to get revenge on Yume Tsubakuro. 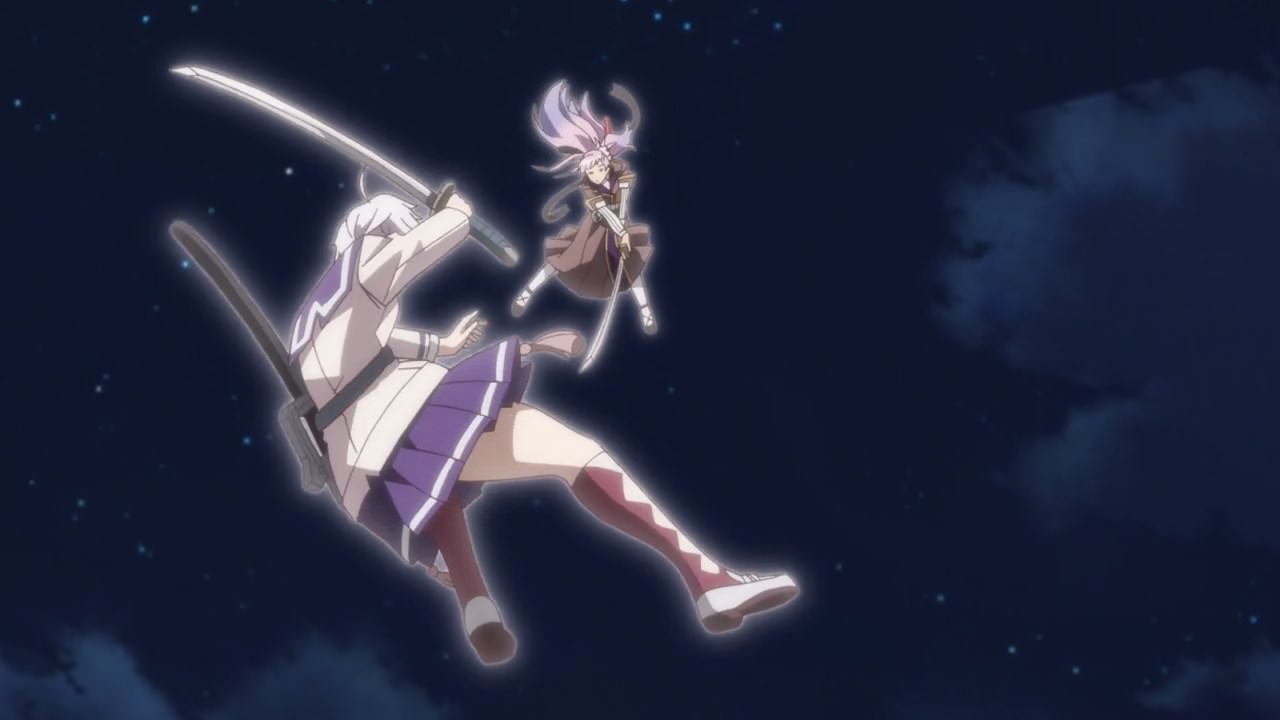 But just like Mai Yanase, Sayaka Itomi goes down as Yume Tsubakuro is too strong to beat her. Well, there goes their escape plan… 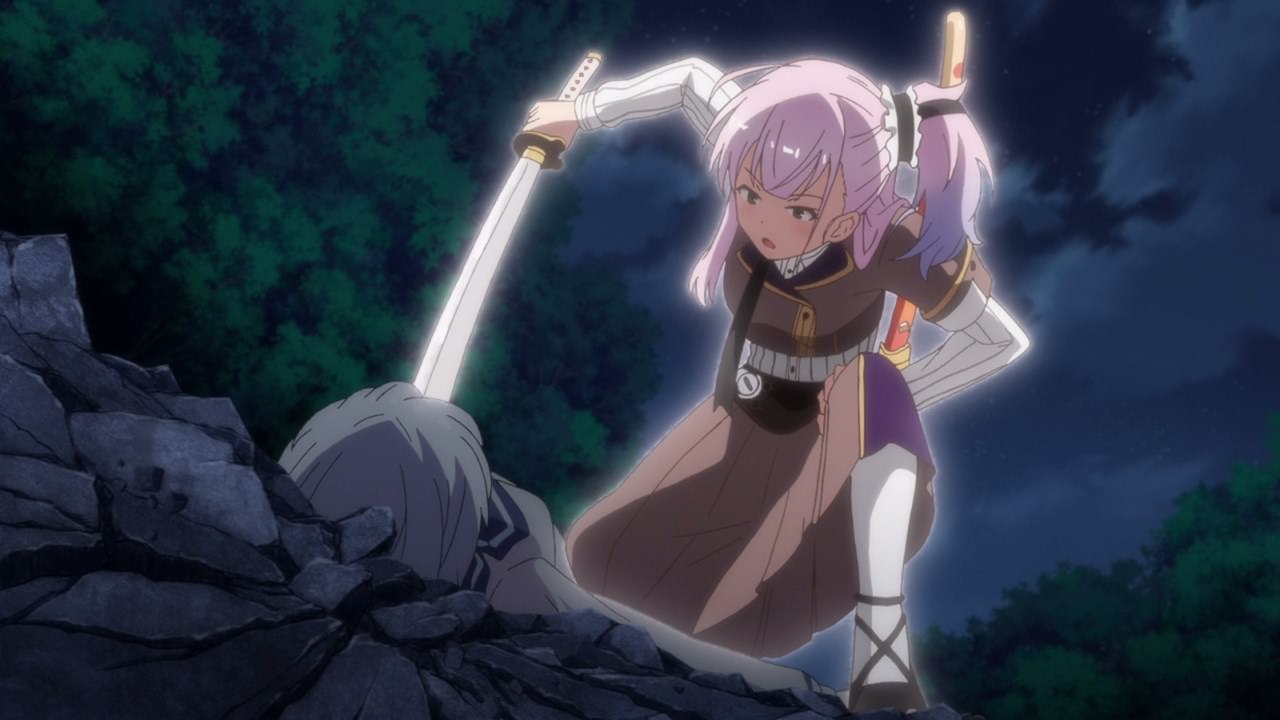 And so, Yume had enough of playing hide and seek and decides to kill Sayaka off. I mean, she doesn’t like being replaced by this toji! 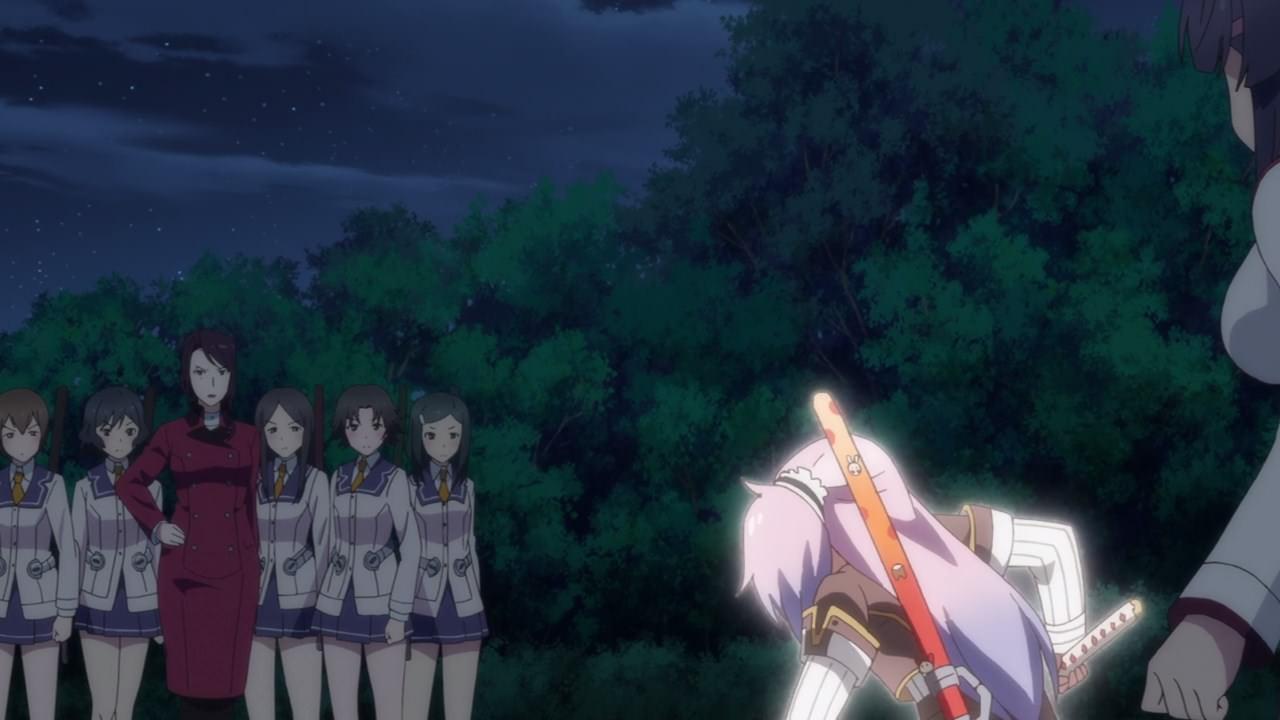 However, President Yukina Takatsu told Yume Tsubakuro to get away from Sayaka Itomi as she and the Renpu Academy students will take it from here.

Really President Takatsu, Yume did her best to capture Sayaka and now you’re dissing her? What an asshole! 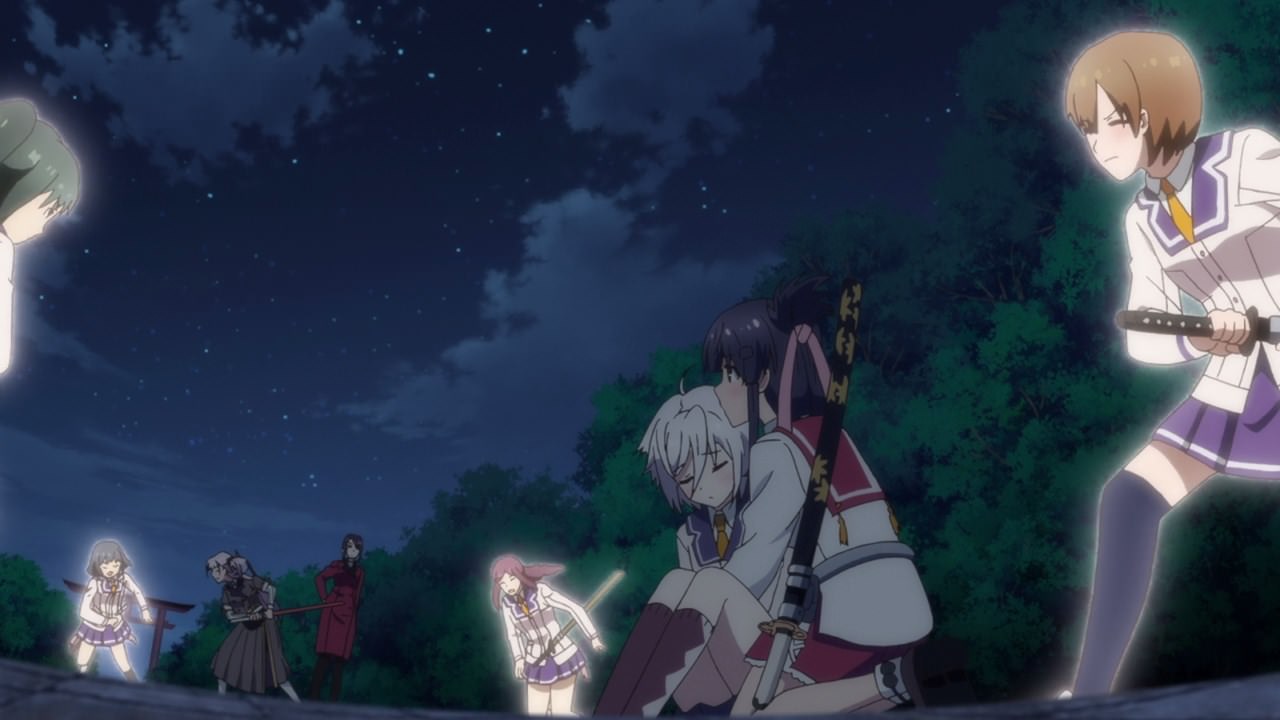 So, Yume Tsubakuro decides to leave by cutting a lot to toji from Renpu Academy, because she has nothing to do with capturing Sayaka Itomi other than playing hide and seek with her and Mai Yanase.

In short, it’s a complete waste of time for Yume Tsubakuro. I mean, she has other things to do like hunting down anyone who opposes Yukari Origami! 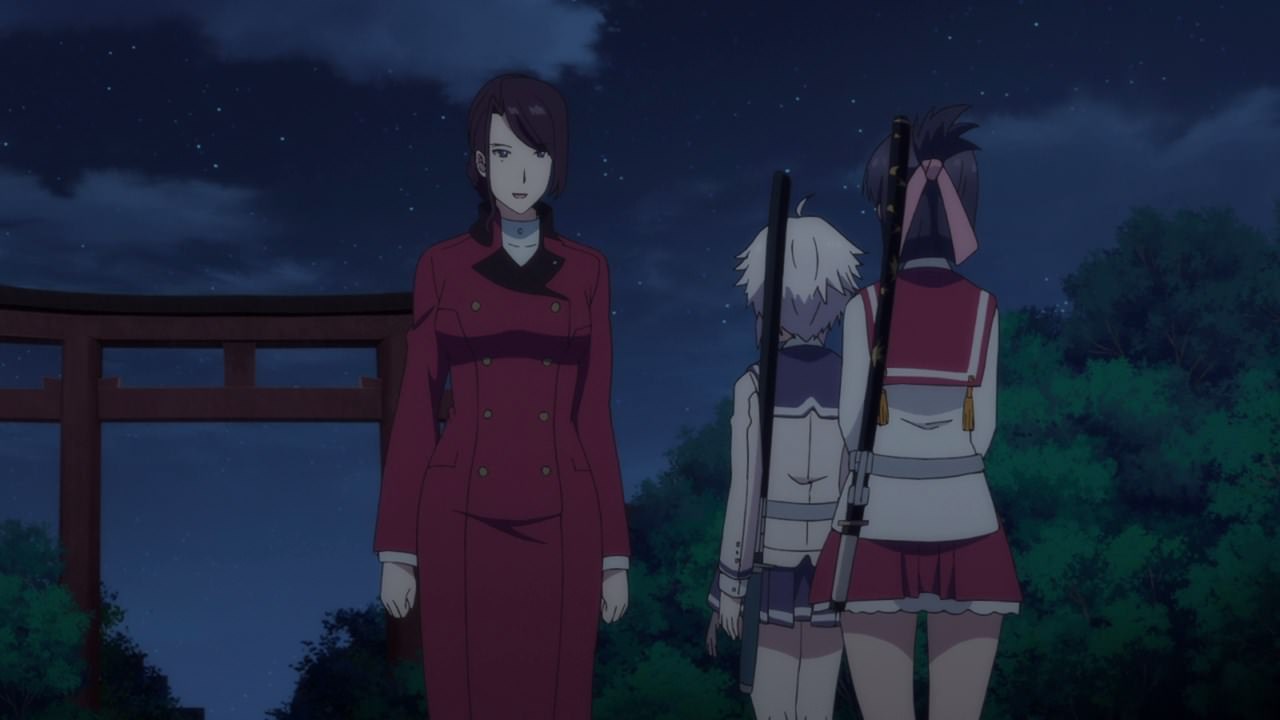 Anyways, President Takatsu asked Sayaka Itomi to return to Renpu Academy at once. Then again, what’s so good on returning to that academy when Sayaka will become an emotionless perfect toji for Yukari-sama? 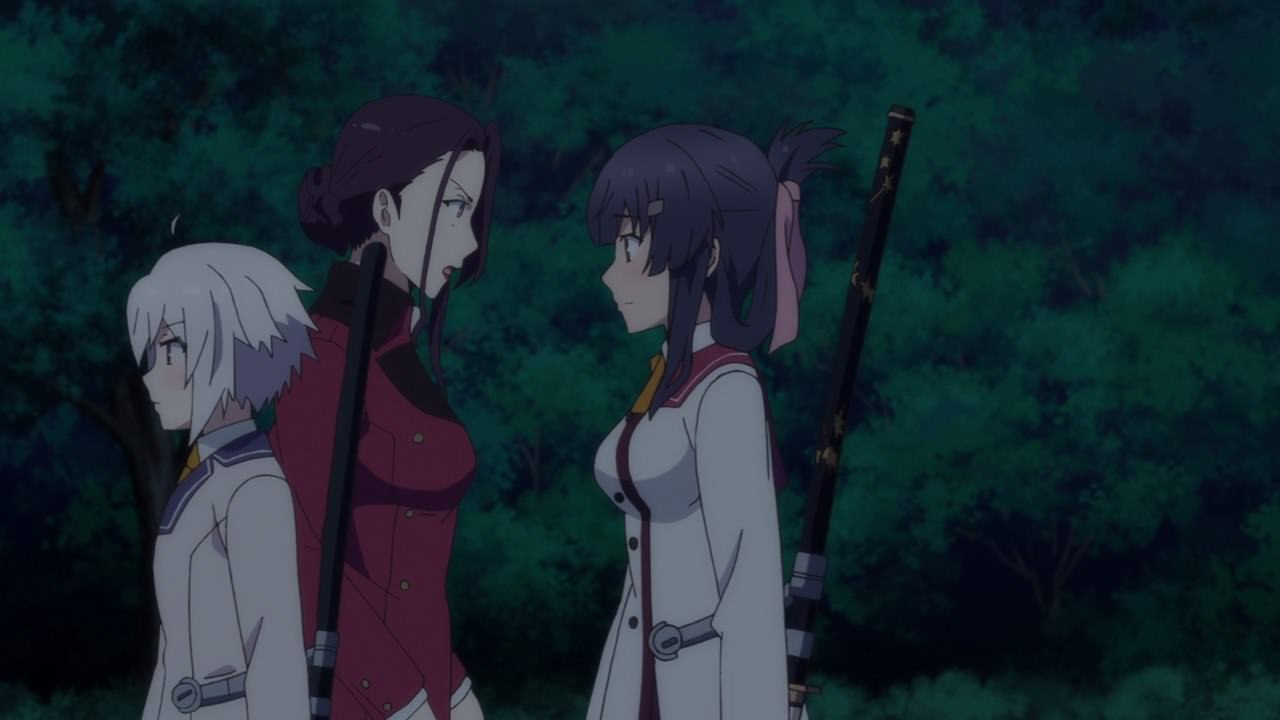 However, Sayaka decides not to go back to Renpu Academy as she simply ignores President Takatsu and take her leave together with Mai-chan.

Wow, Sayaka Itomi just ignored Yukina-san’s order as she wants to be herself instead of becoming a tool for President Takatsu’s ambitions. Speaking of President Takatsu, she’s pathetic as Yukina-san couldn’t stop her best pupil from escaping with Mai Yanase. 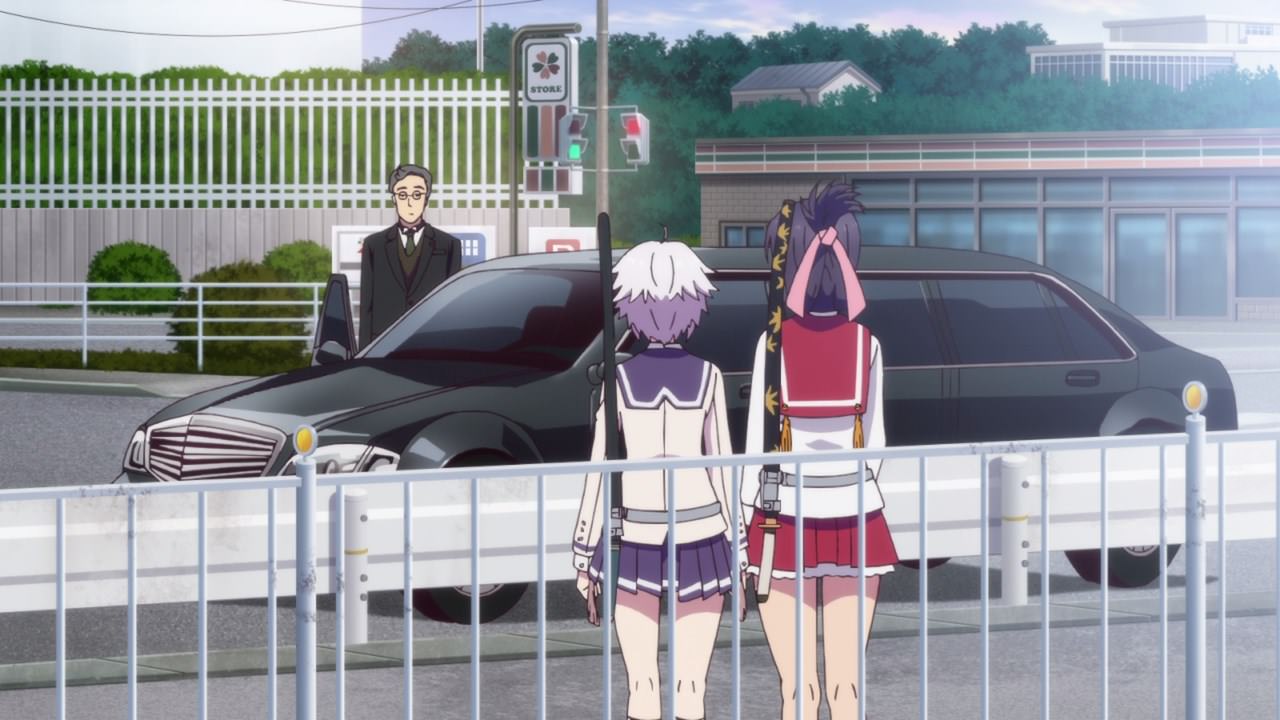 Anyways, both Sayaka Itomi and Mai Yanase managed to escape from both the elite guard and President Yukina Takatsu. And now, seems that they’ll have a ride… 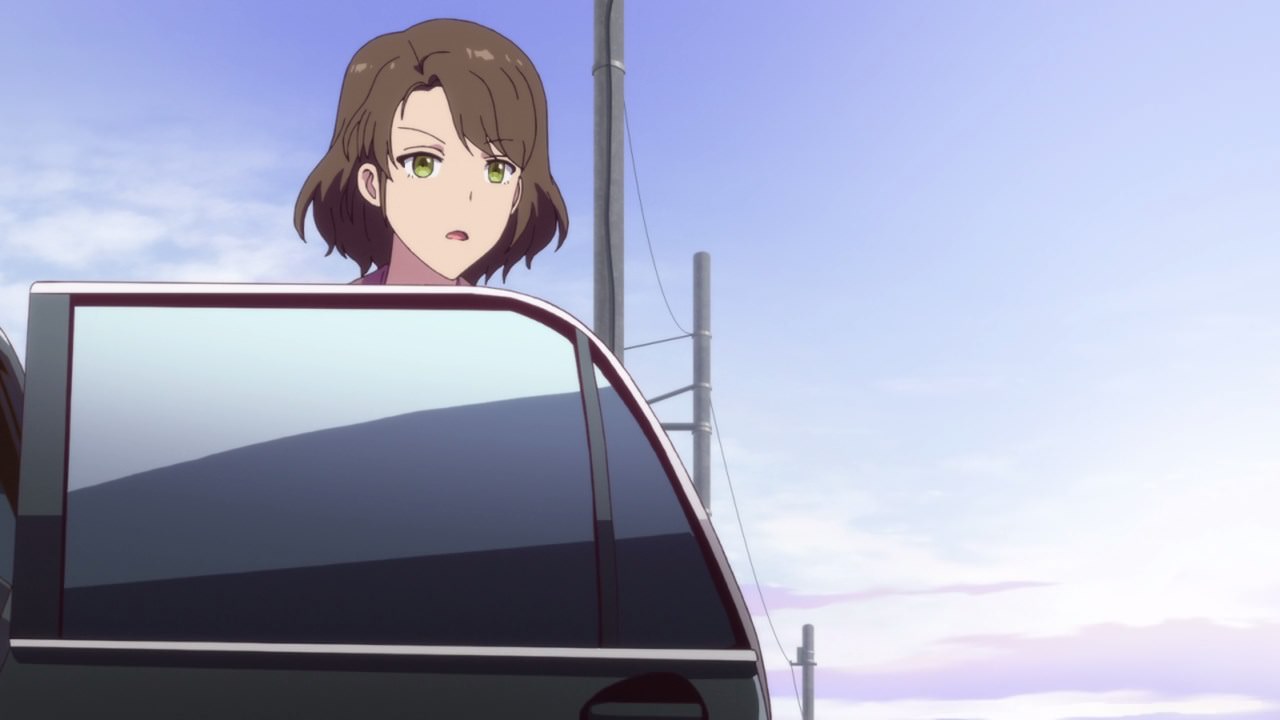 …from Minoseki Academy’s president Ema Hashima. Hmm, I wonder where will this car ride take them since Ema-san has decided to defect Yukari-sama’s sphere of influence. 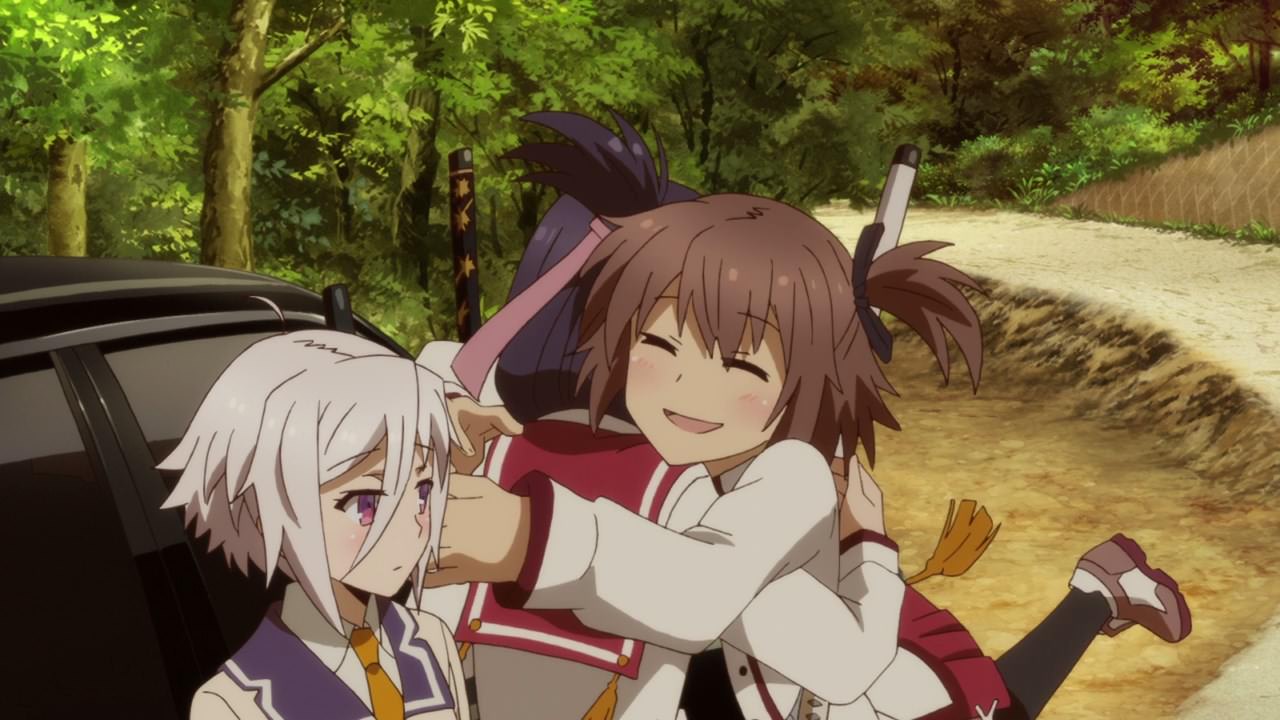 In any case, it turns out that both Sayaka and Mai were taken to Mokusa where they’ll meet up with various toji who oppose the Origami family.

Well, Kanami Etou is happy to see Mai Yanase after they’re separated for a long time. 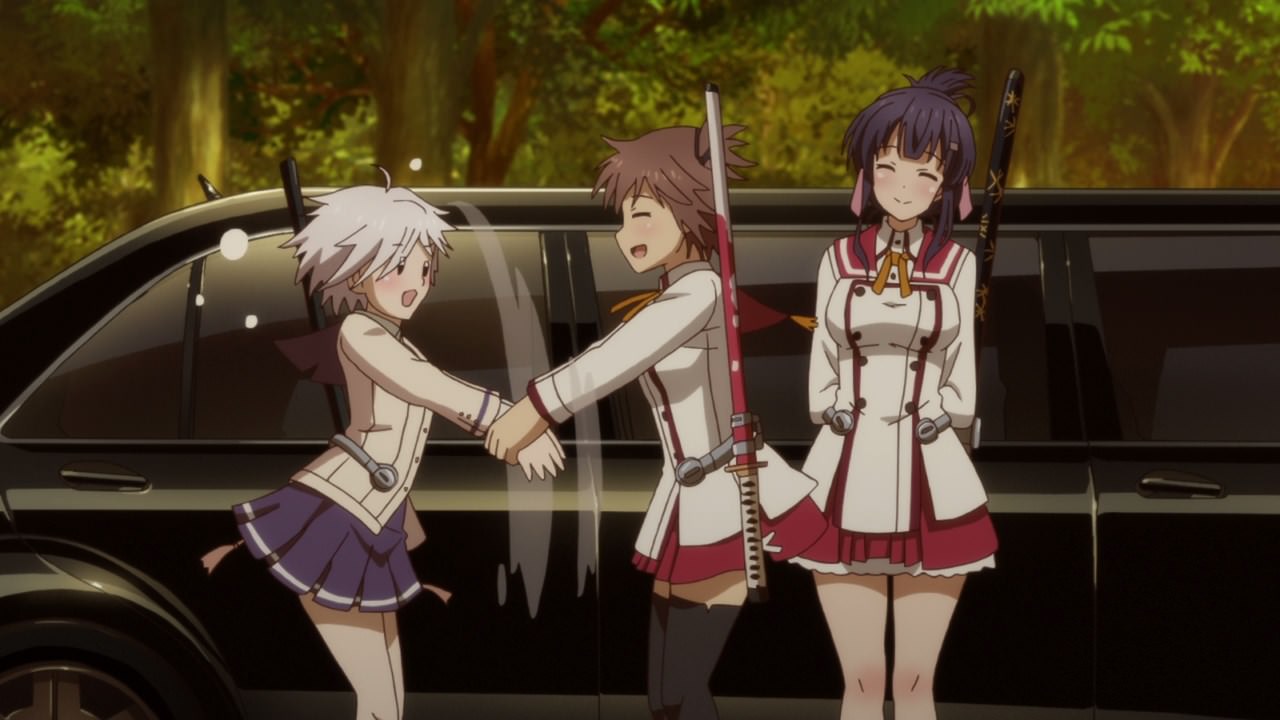 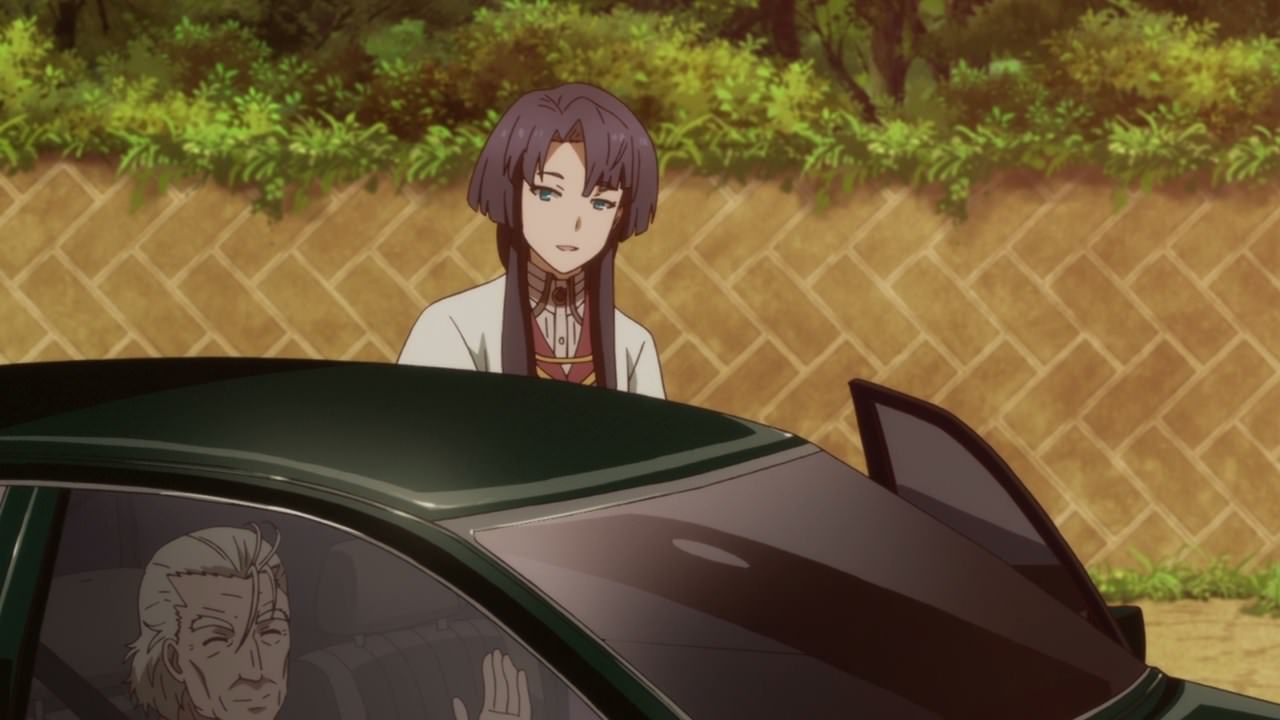 One last thing, seems that Richard Friedman brought another person who’s supporting Mokusa. This is Akane Origami and you know what you’re thinking, how the hell is she supporting Mokusa when Akane-sama is part of the Origami household?

Well, let’s wait and see on why Akane Origami joined Mokusa on the next episode. I mean, there’s a reason for it!