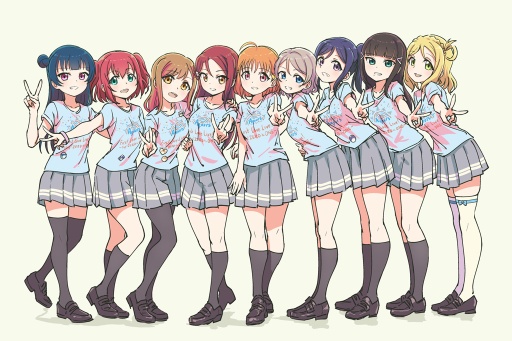 This post is brought you by Aqours from Love Live! Sunshine!! as it’s been a year since their first concert was held on Yokohama Arena for two days. It’s been quite a journey when Aqours was still new and now they become so popular that they carry the franchise, even though μ’s will return eventually and the Perfect Dream Project are just starting out (but eventually become the successors later).

By the way, this picture is based on this tweet after the second day is over! Oh and if you’re interested on my experience for Aqours 1st Live, click this link to check it out. 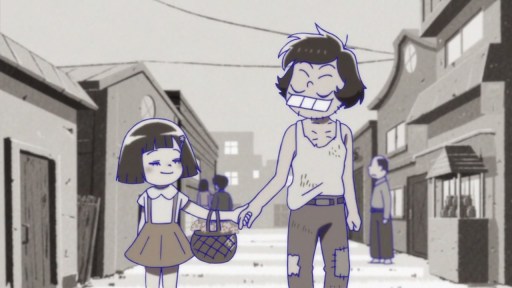 Let’s start this episode with Osomatsu-san and I have to say that there’s some interesting stories leading up to the finale, ranging from Totoko-chan getting jealous that the Matsuno sextuplets are getting focused on another girl, to this Iyami-centric episode where a younger self tried to help a blind girl see again whatever it takes.

I have to say that I’m still enjoying this show, especially Episode 18 in which it’s one of the best episodes to date. While it somewhat surpassed by some other comedy titles (like Pop Team Episode), Osomatsu-san is still relevant as ever.

Next up is Gakuen Babysitters where Ryuuichi Kashima has become a high school student after graduating from middle school. He’s still working at the daycare center where Ryuuichi takes care of Kotaro and the other kids there, but now he has company as Ryuuichi’s newly-established babysitters’ club has a new member named Hayato Kamitani who has a younger brother named Taka.

So yeah, Ryuuichi Kashima is doing well at Morinomiya Academy and the children loved him for being a caring teenager. Still, I wonder what’s gonna happen to Ryuuichi once he graduated from high school and who’s gonna replace him. Then again, this anime adaptation won’t go any further.

And lastly, here’s Mitsuboshi Colors and while Yui Akamatsu and her friends are sometimes cause trouble to the likes of Saito-san, they’re still having fun protecting the town as Colors until 5:00 PM.

All I can say is that Colors is having a good childhood that SILVER LINK did a great job on how awesome they are! There’s nothing more to say on how good this slice-of-life anime is since Mitsuboshi Colors is a good show to watch.

Anyways, I’m gonna end this episode with Pop Team Epic. There’s nothing to talk about this show other than being created to talk shit about everything, especially Takeshobo.