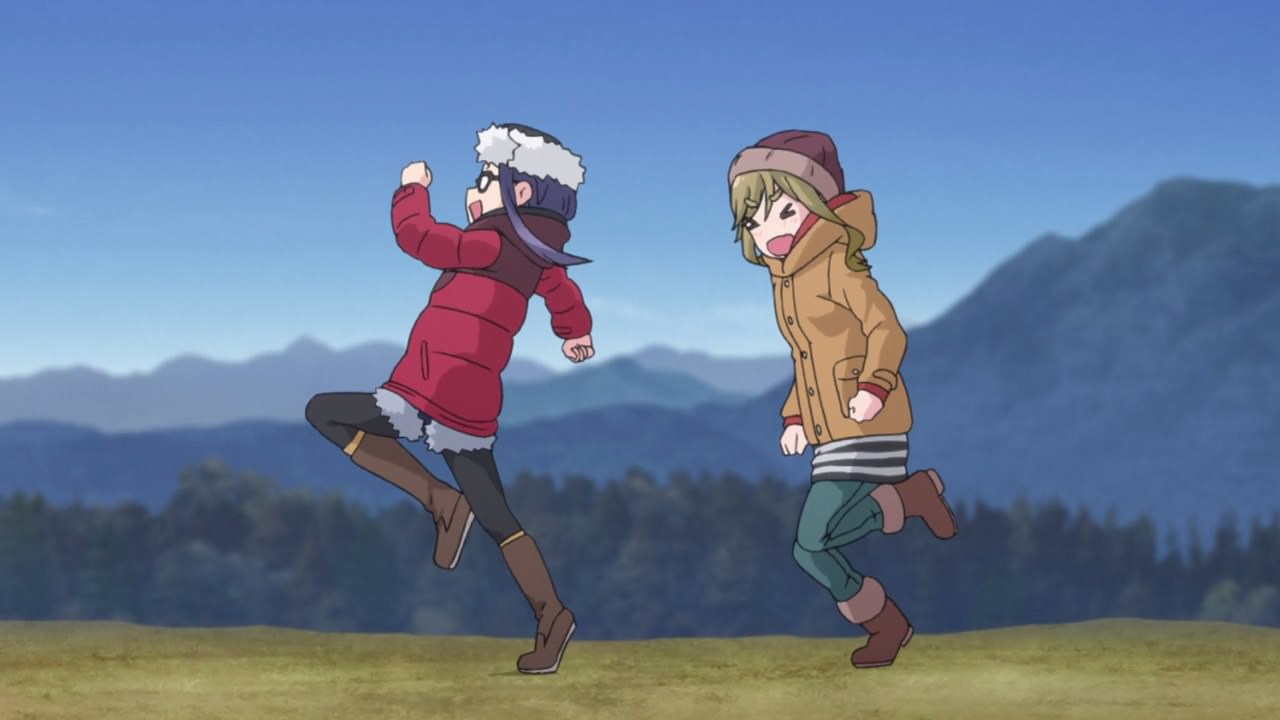 On this episode, the Outdoors Club are now at the Asagiri Highlands as Chiaki Oogaki and Aoi Inuyama run around and get amazed to how vast this campsite is! 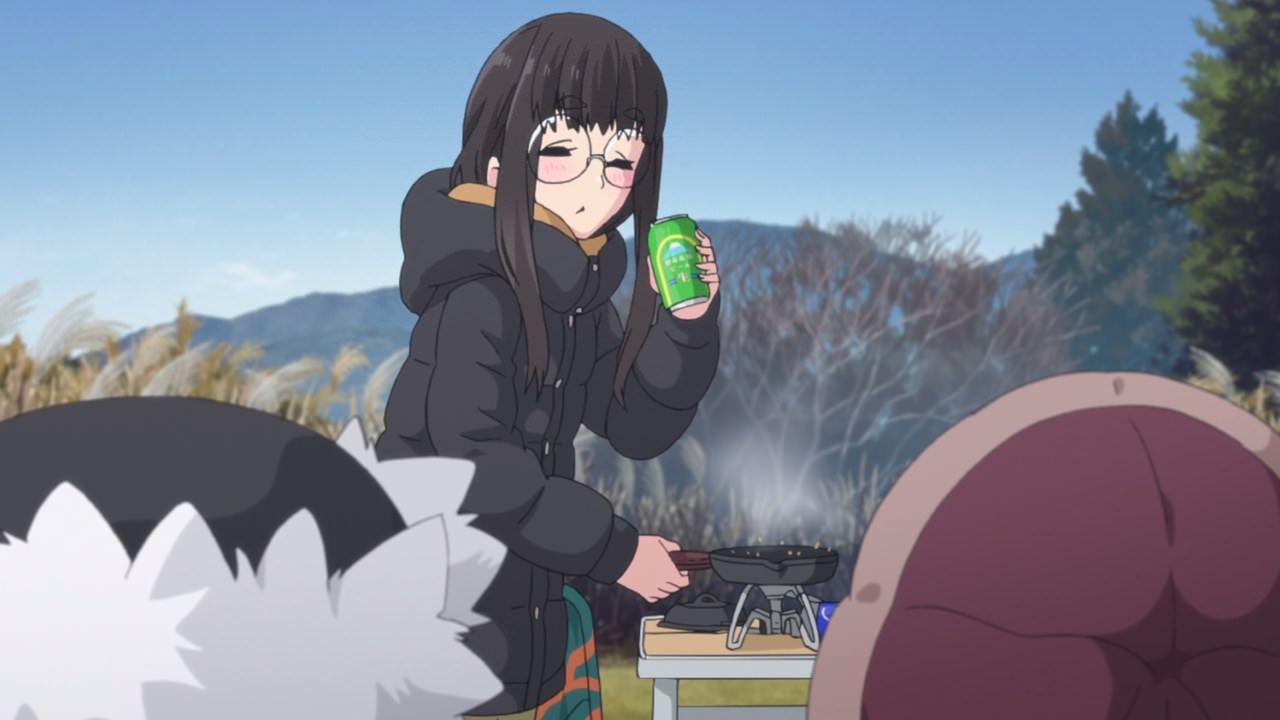 Then again, seems that Minami Toba started her day by cooking bacon while chugging a can of beer.

Yeah, that’s typical from Toba-sensei since she always hold some booze whenever she goes. 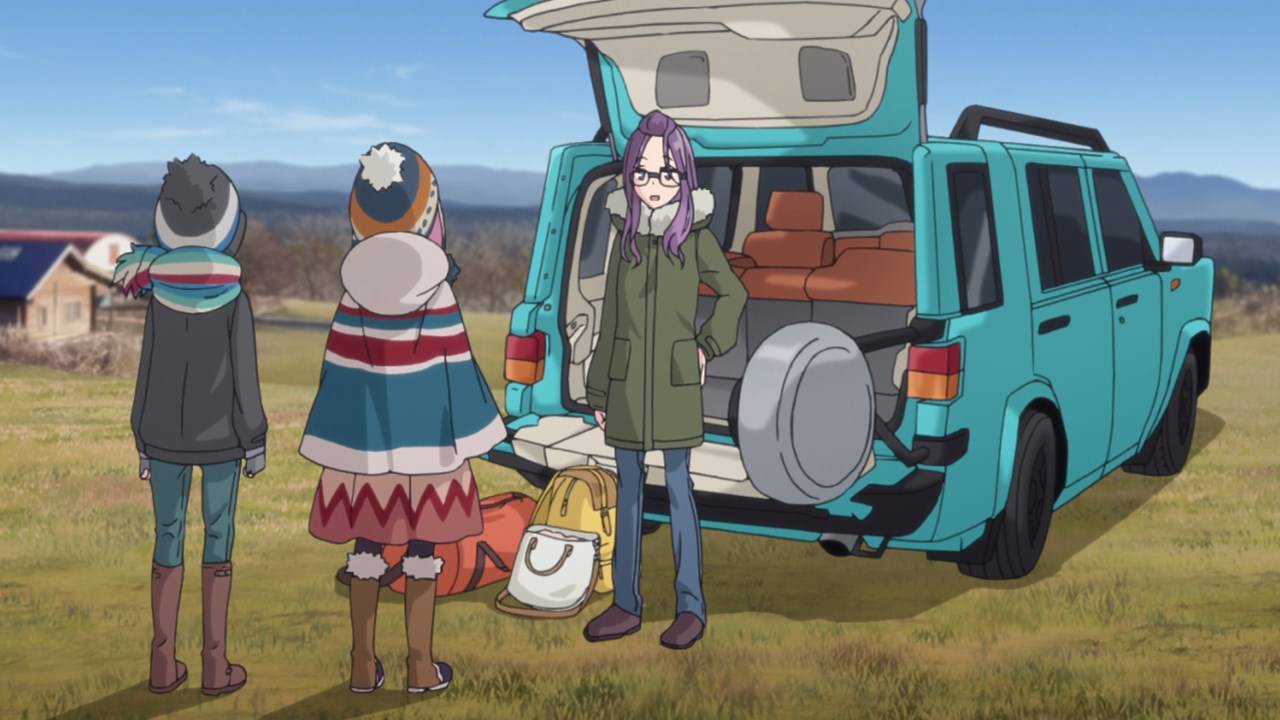 Also, here’s both Rin Shima and Nadeshiko Kagamihara as they arrived at the Asagiri Highlands, although Shimarin got into the campsite ahead of Nadeshiko. 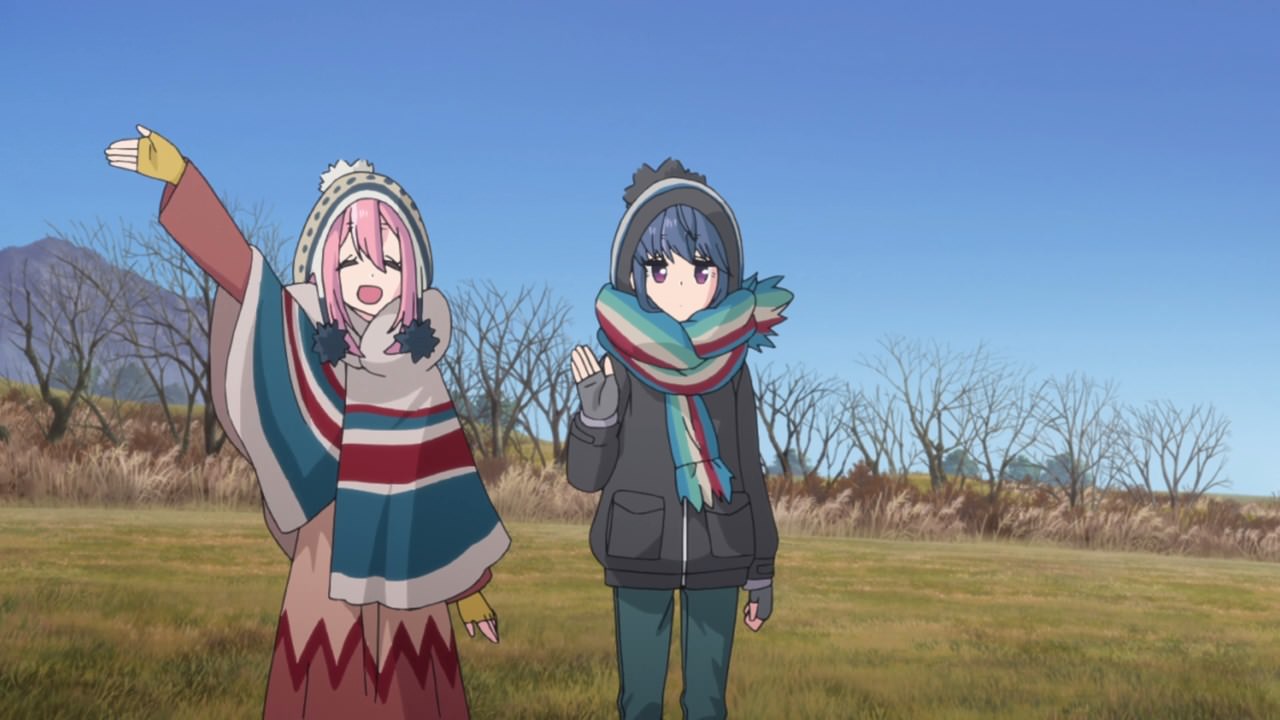 With that said, they’re on their own as Sakura Kagamihara told them to take care of themselves. Now then, let’s meet up with the others since they want to camp together. 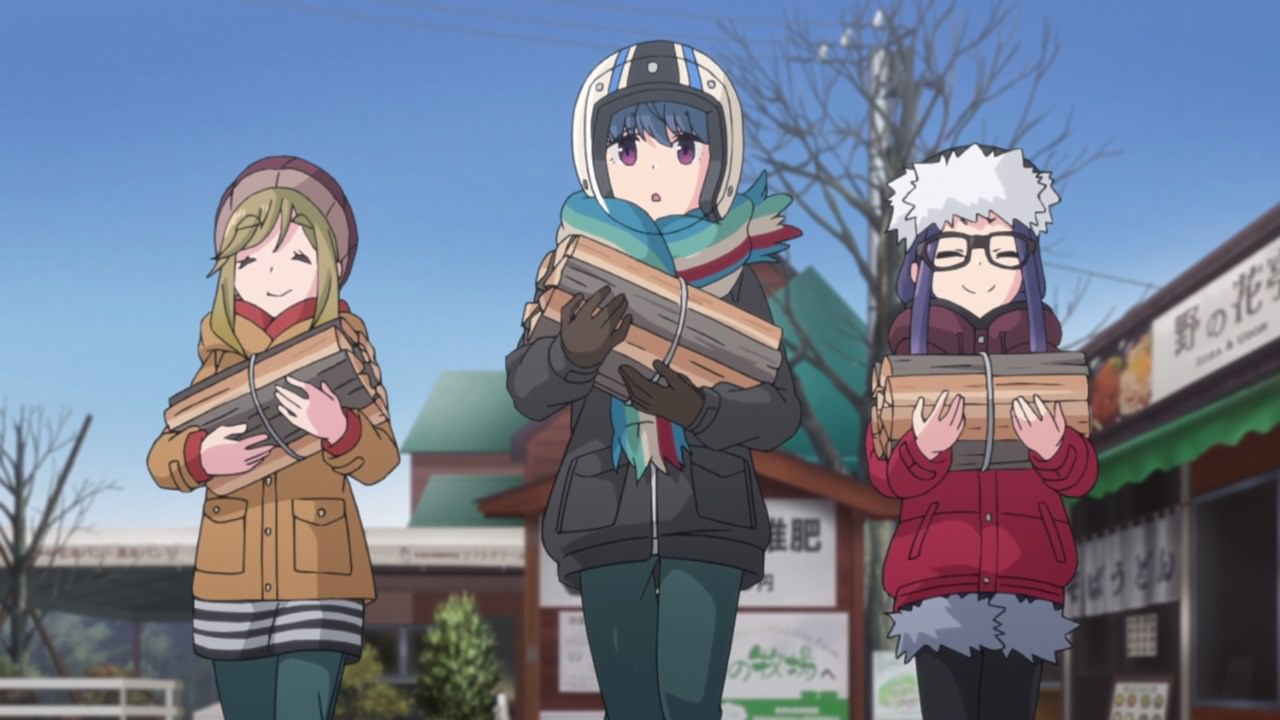 Fortunately, Rin-chan managed to find both Aoi and Chiaki as they’re carrying lots of firewood. Oh yeah, they bought it plenty because it’s cheap! 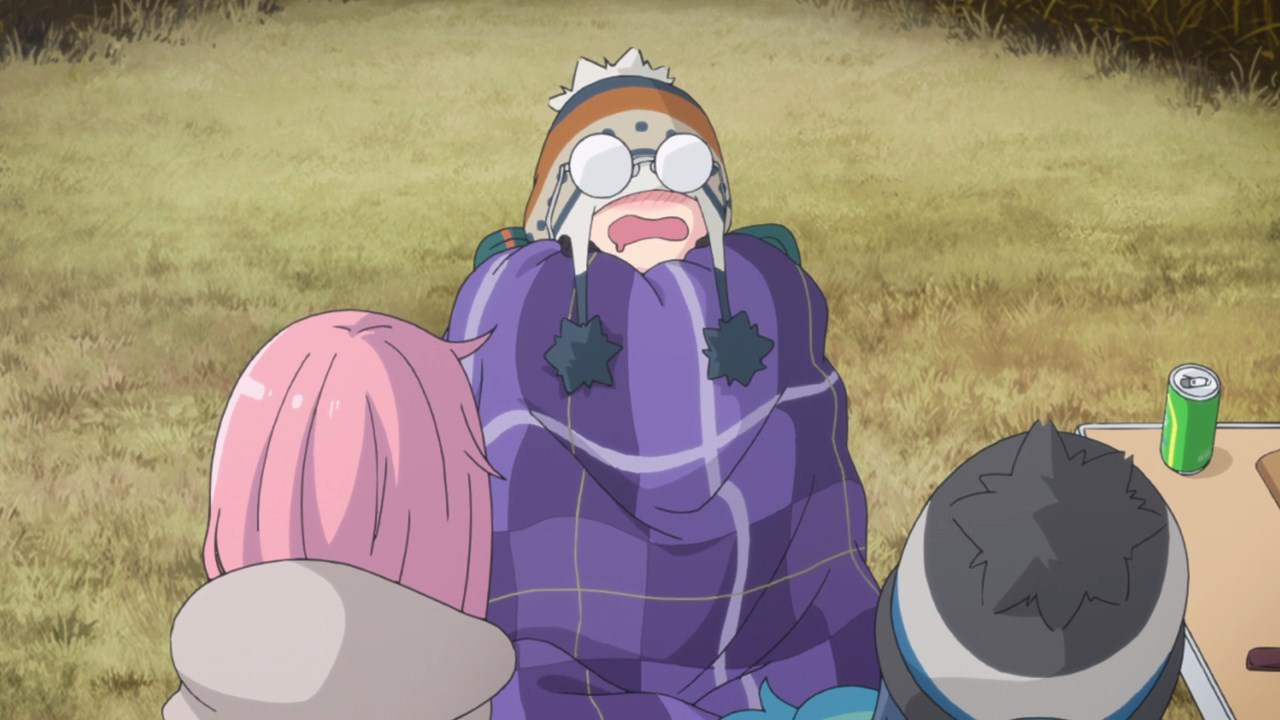 Also, both Nadeshiko and Rin-chan found Toba-sensei who’s fully sobered-up that she fell asleep. What happened to her bacon though?

Man, now the only person left is Ena Saitou who is still missing… 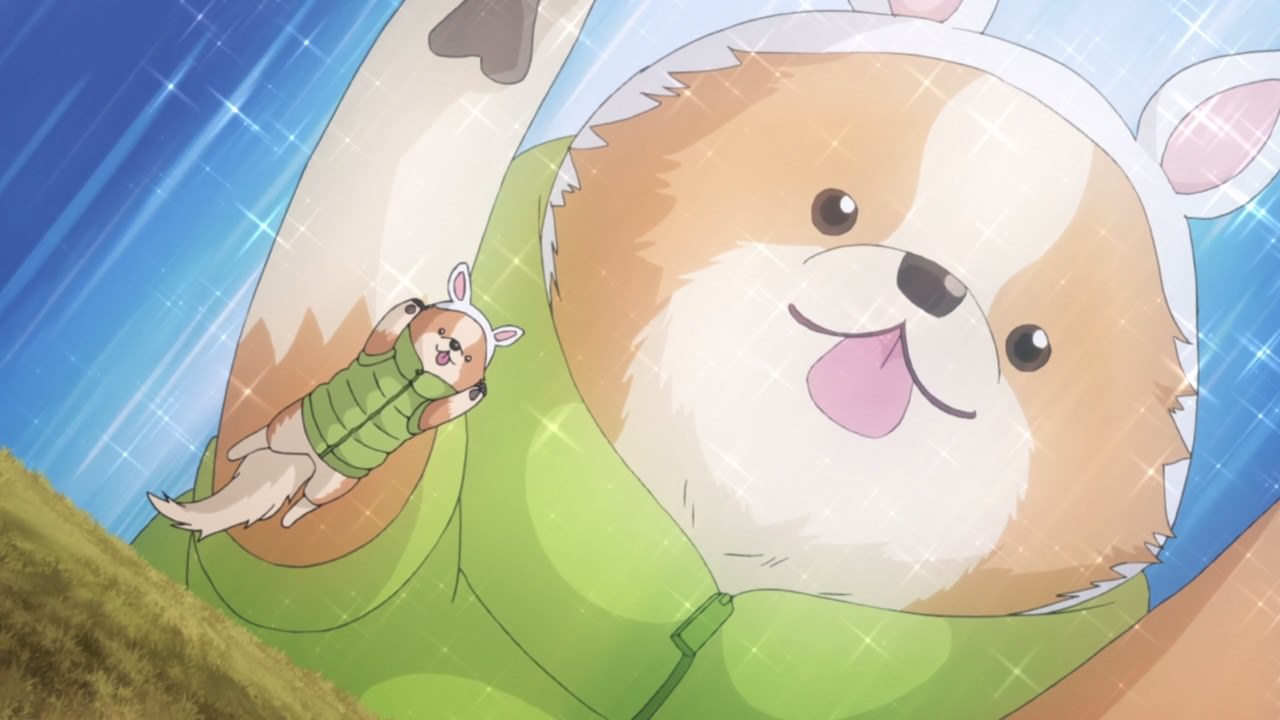 That’s until a dog with bunny ears appeared out of nowhere. Turns out to be Ena-chan’s dog Chikuwa, which I must say that her dog is so cute with that bunny ears! 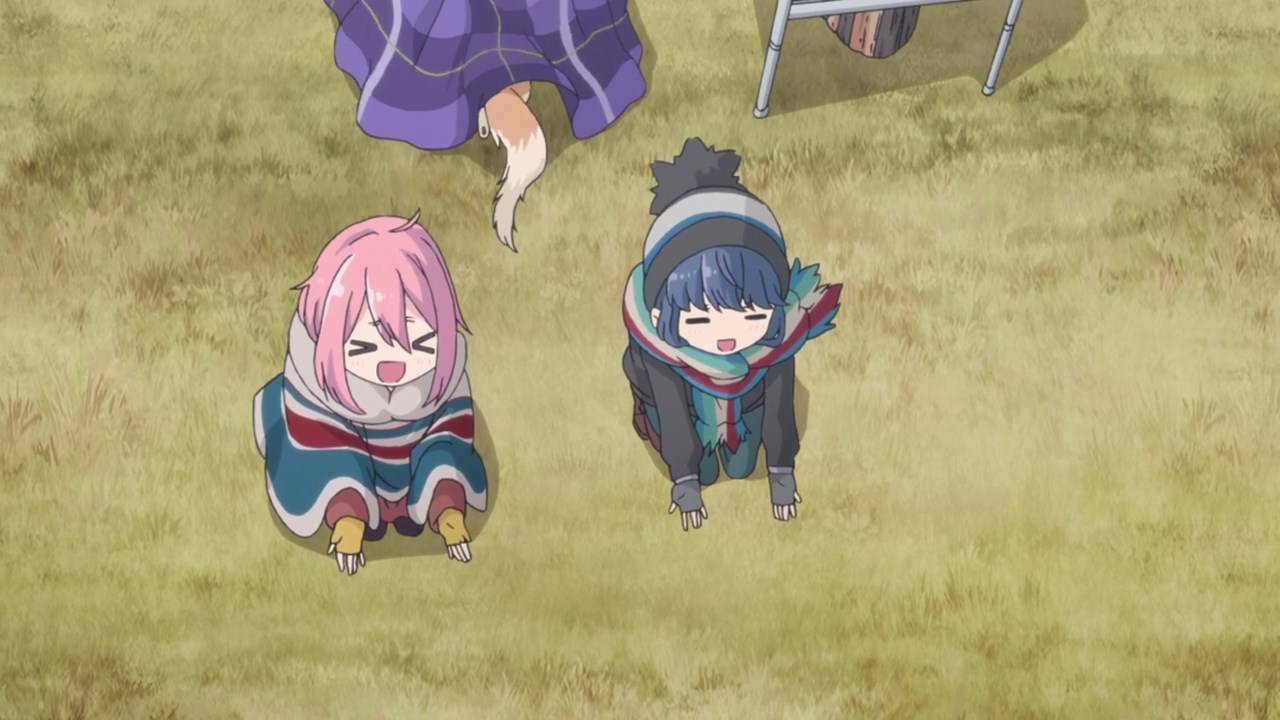 Of course, Chikuwa went straight under Toba-sensei’s seat as Ena’s dog likes to cuddle up in warm areas like a kotatsu or under the bed sheet. 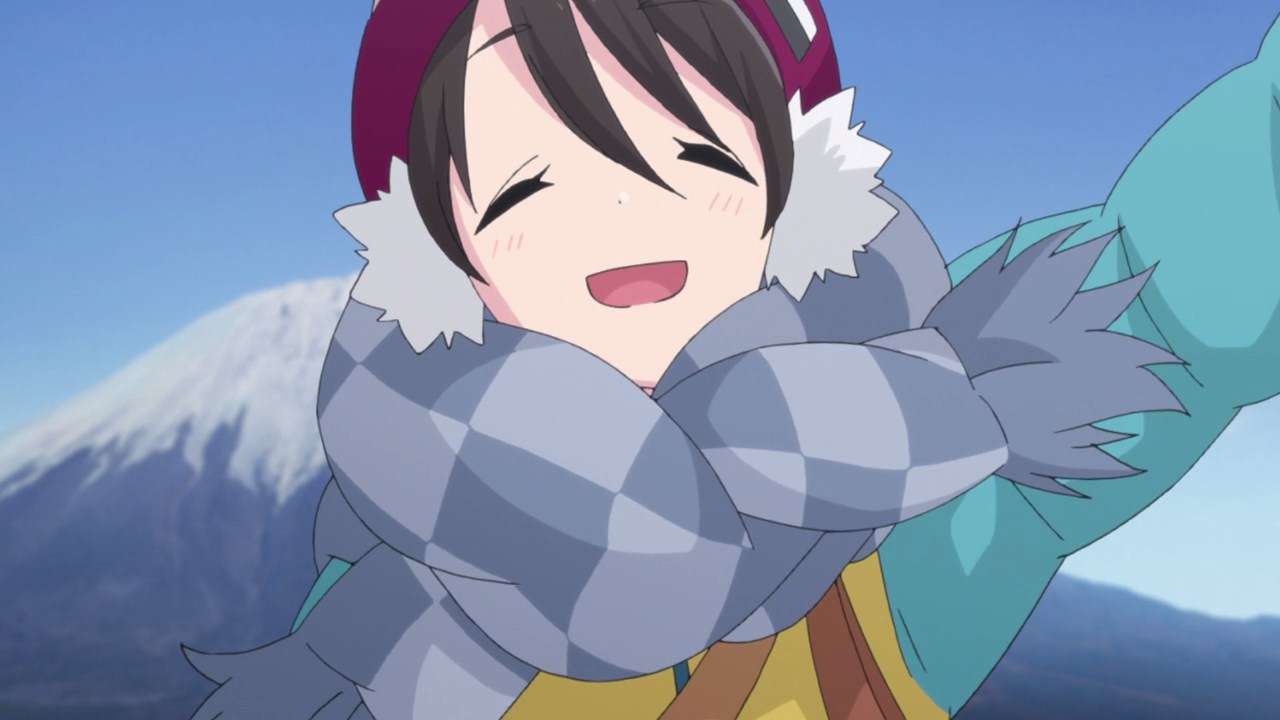 Oh, and here’s Ena Saitou as she brought her camping equipment which costs a lot of money than Rin’s hands-down equipment from her grandpa, or even the Outdoors Club. 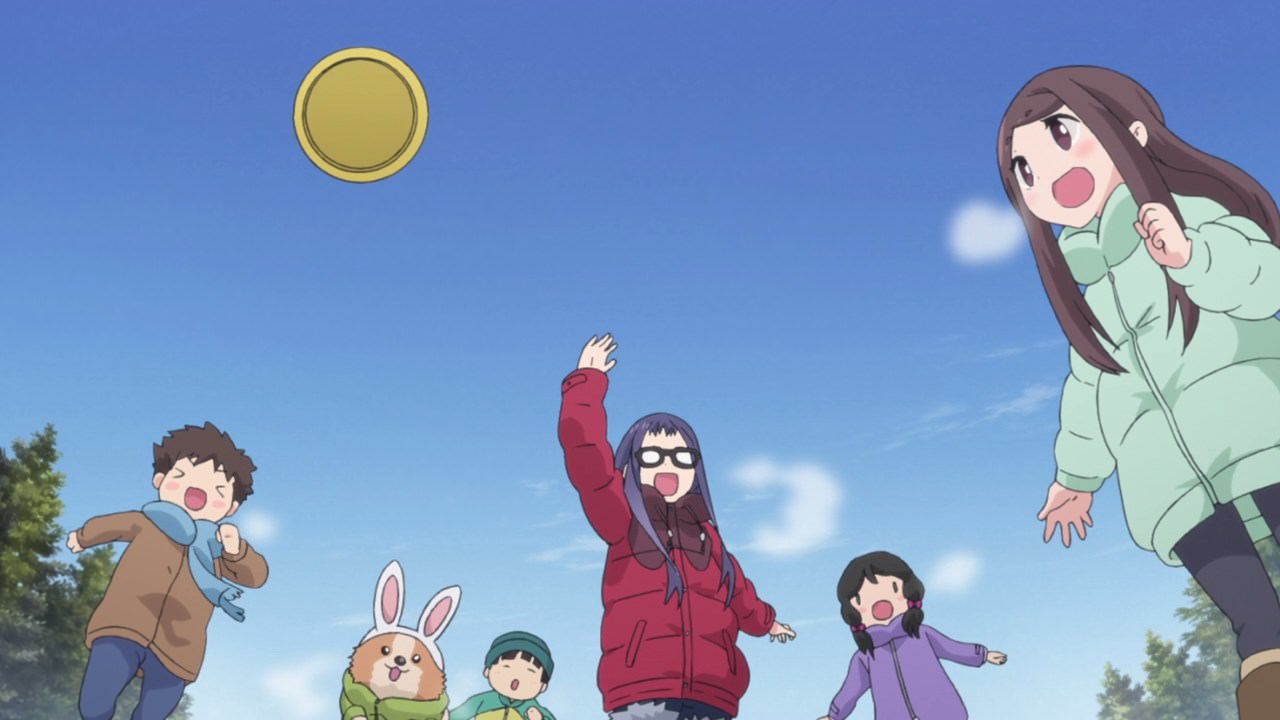 So with all of the members gathered, it’s time for them to have fun at the Asagiri Highlands as they play together with the kids. 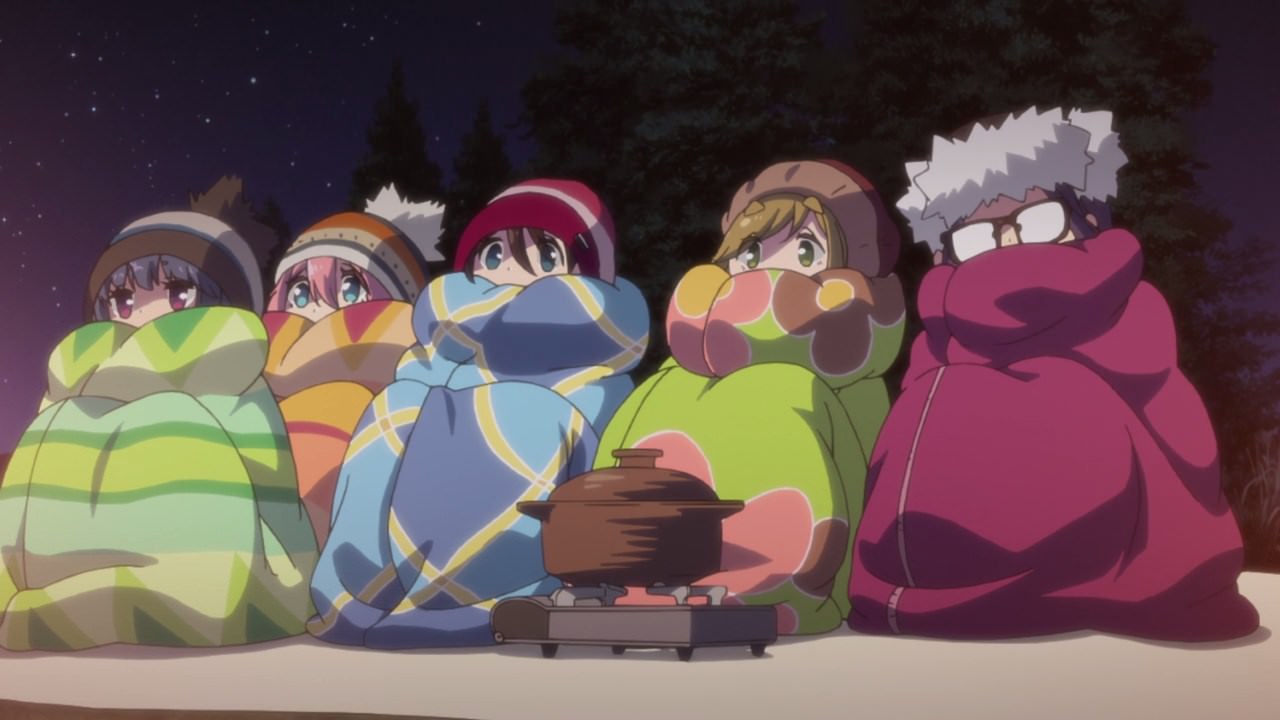 And as night arrives, looks like the secret blanket society has been expanded with more members joining up. Of course, what’s important is their dinner for tonight. 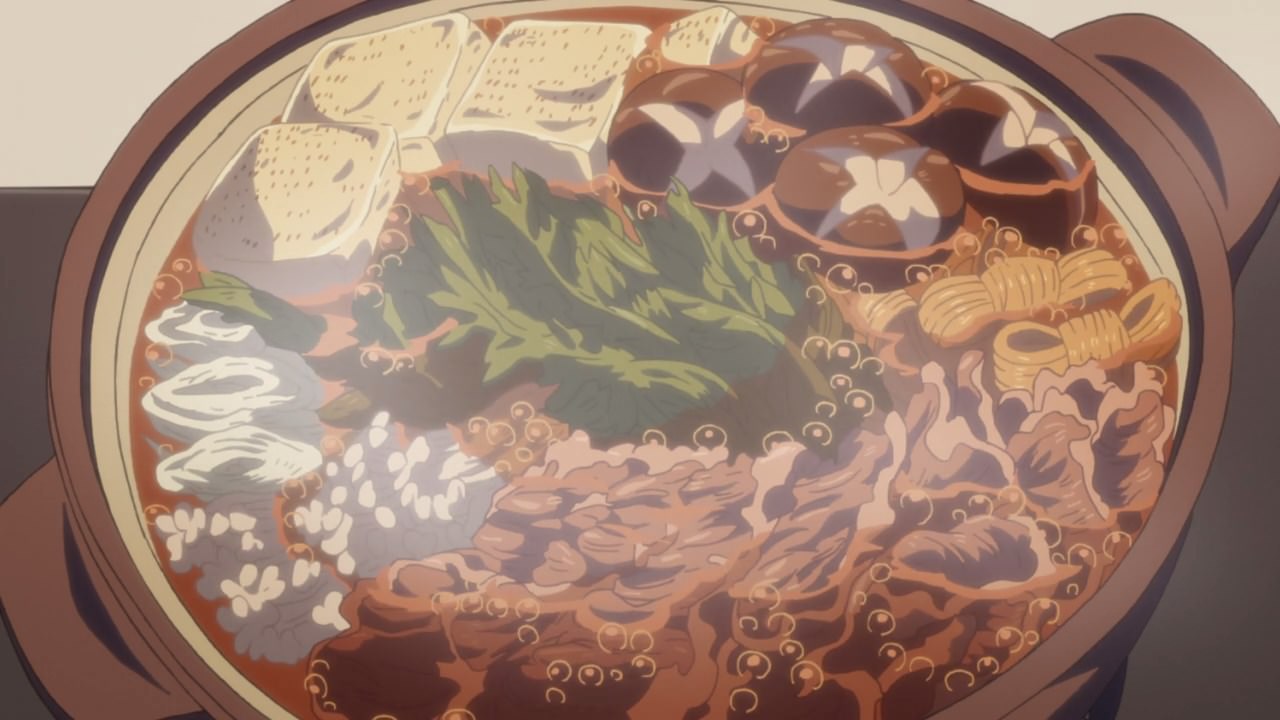 Luckily, Aoi Inuyama cook some beef sukiyaki for this special occasion. Even though this dish doesn’t fit with the Christmas theme, I think having a sukiyaki is great since they can share it with everybody! 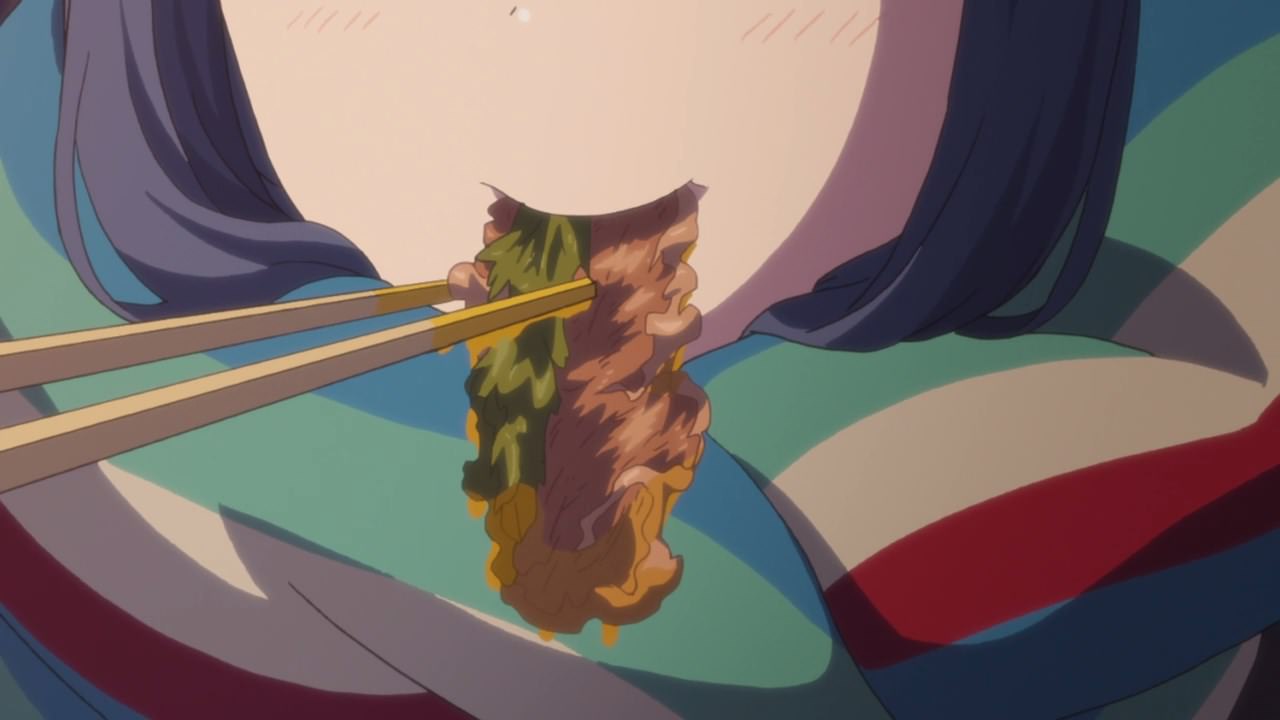 But as for the taste, it’s up to Rin-chan to be the judge as she takes the bite… 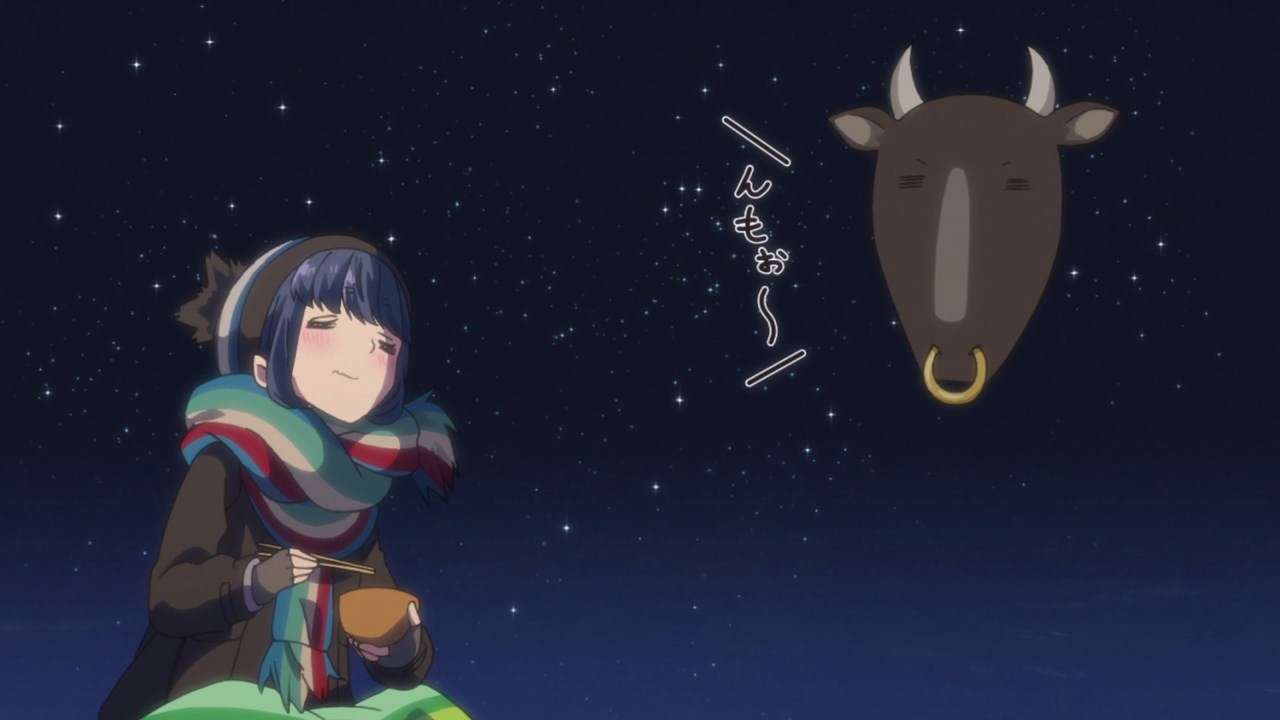 …and it seems that she’s in nirvana that the beef is so soft and tender. Add with the chop suey greens and coated with egg, Shimarin felt thankful to the cow for its wonderful beef. 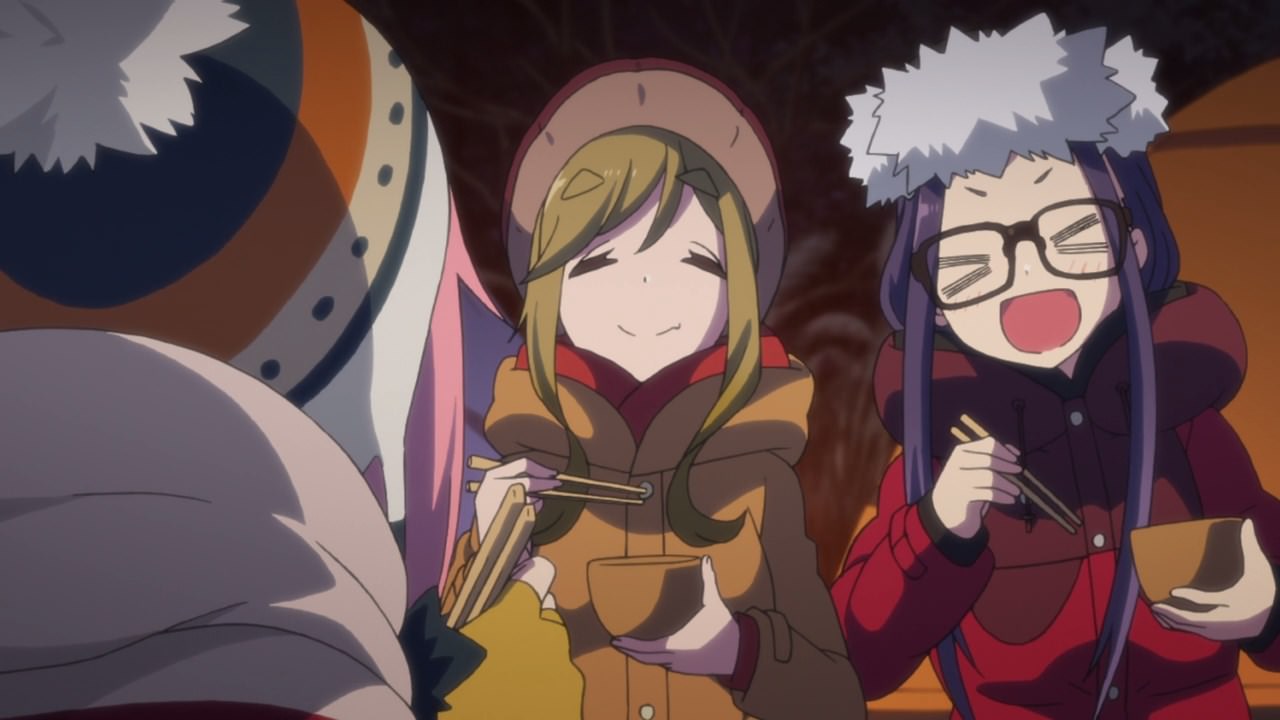 Oh yeah, and it looks like the rest of the pack are enjoying it with Nadeshiko and Chiaki felt happy on how Aoi’s beef sukiyaki turned out! 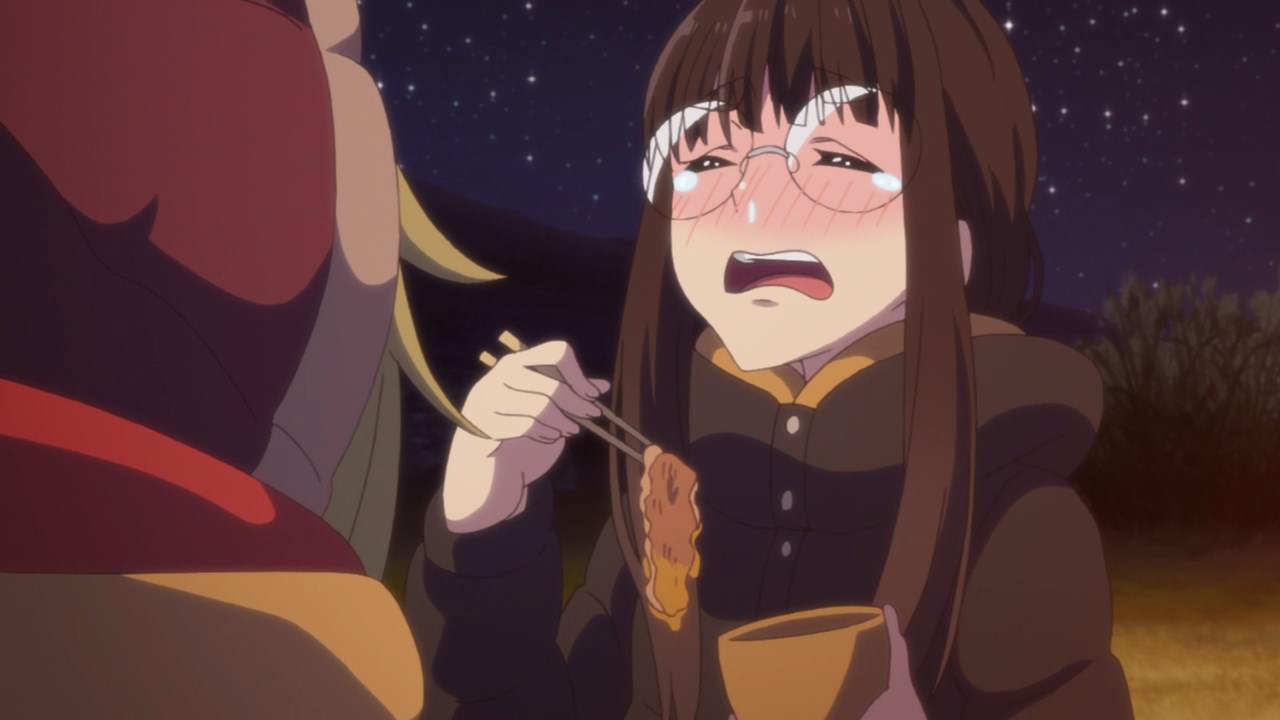 Of course, there’s one person who got cried upon eating the sukiyaki that she wanted to have sake to compliment it.

Seriously Minami Toba, you had a six-pack of beer and a rum to get sobered all day. You should be content to what you have! 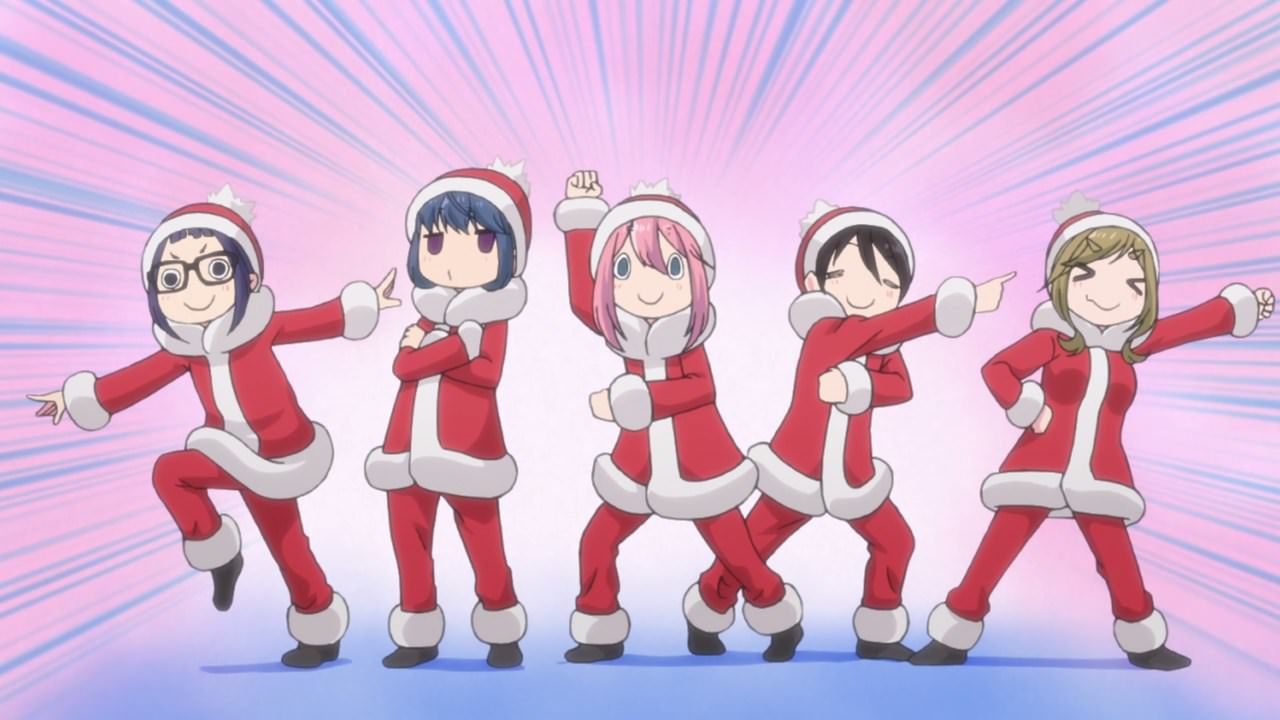 Next up, the girls are dressed up as Santa Claus as they’re ready for their next sukiyaki dish… 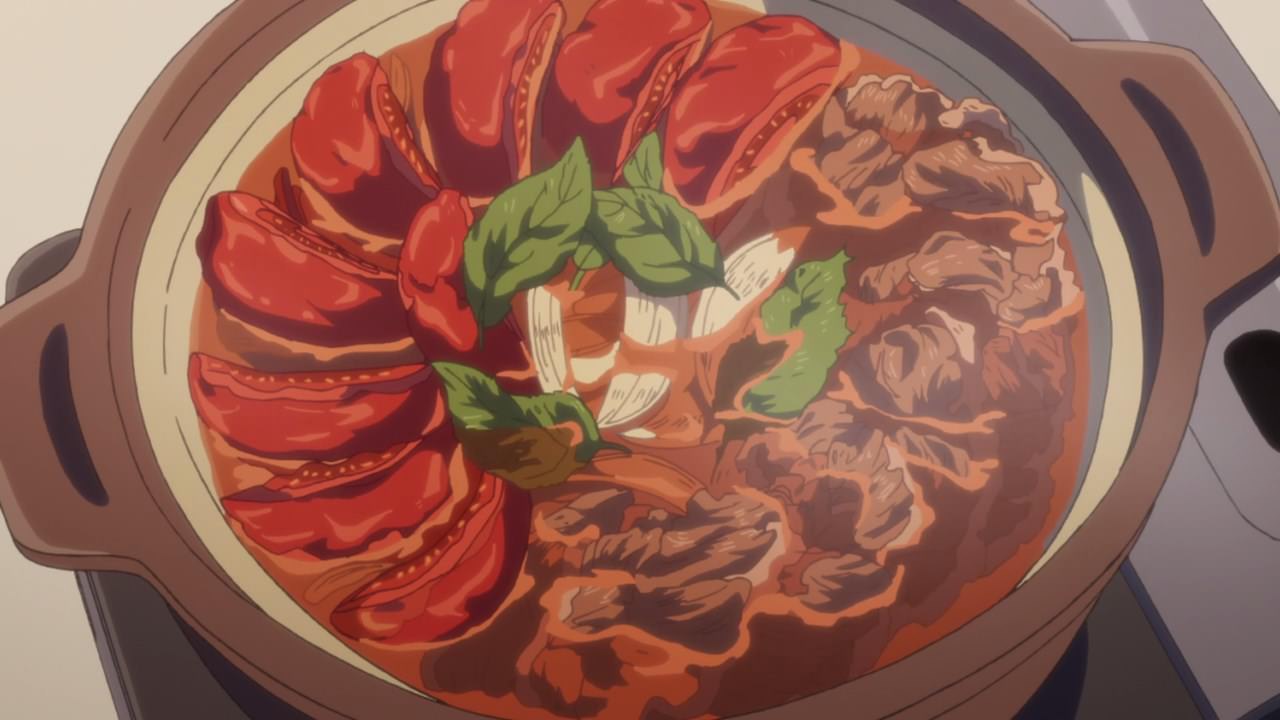 This time, Aoi Inuyama added some tomatoes, basil, and onions for this unique dish with a Western-style twist to it. 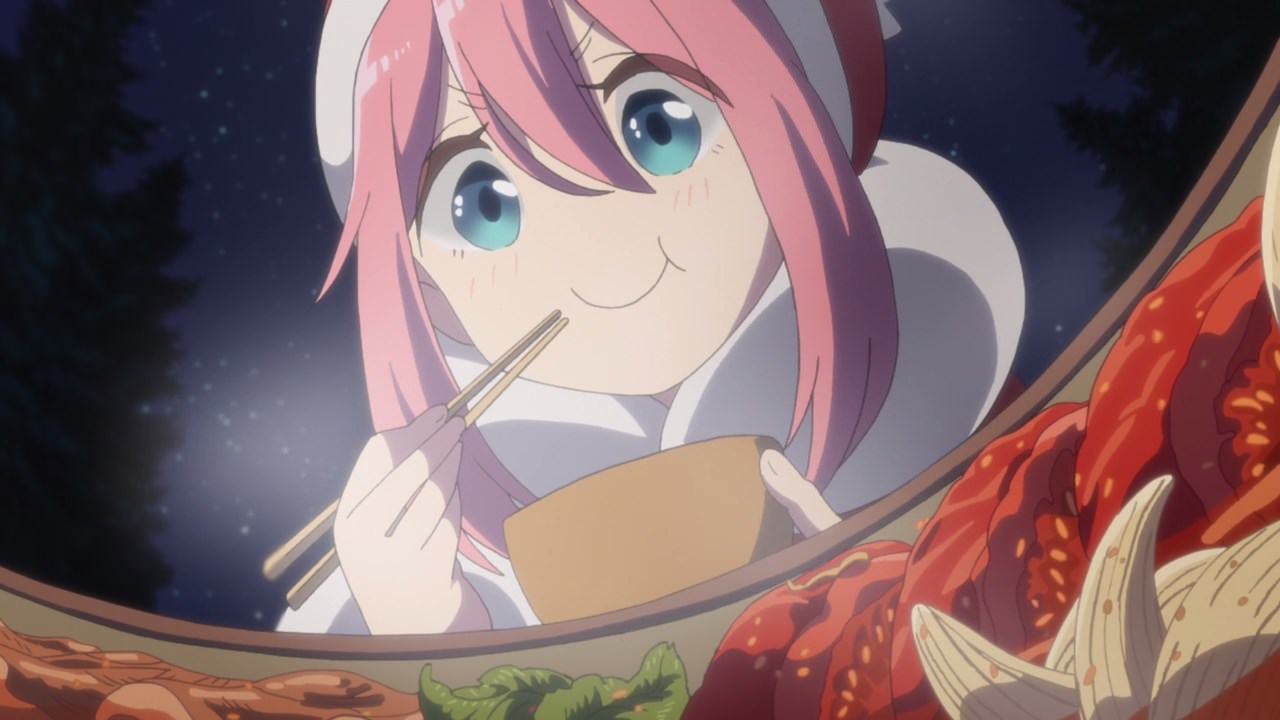 As for the taste, it’s delicious as Nadeshiko Kagamihara loved it as the sukiyaki broth complemented with the tomatoes! 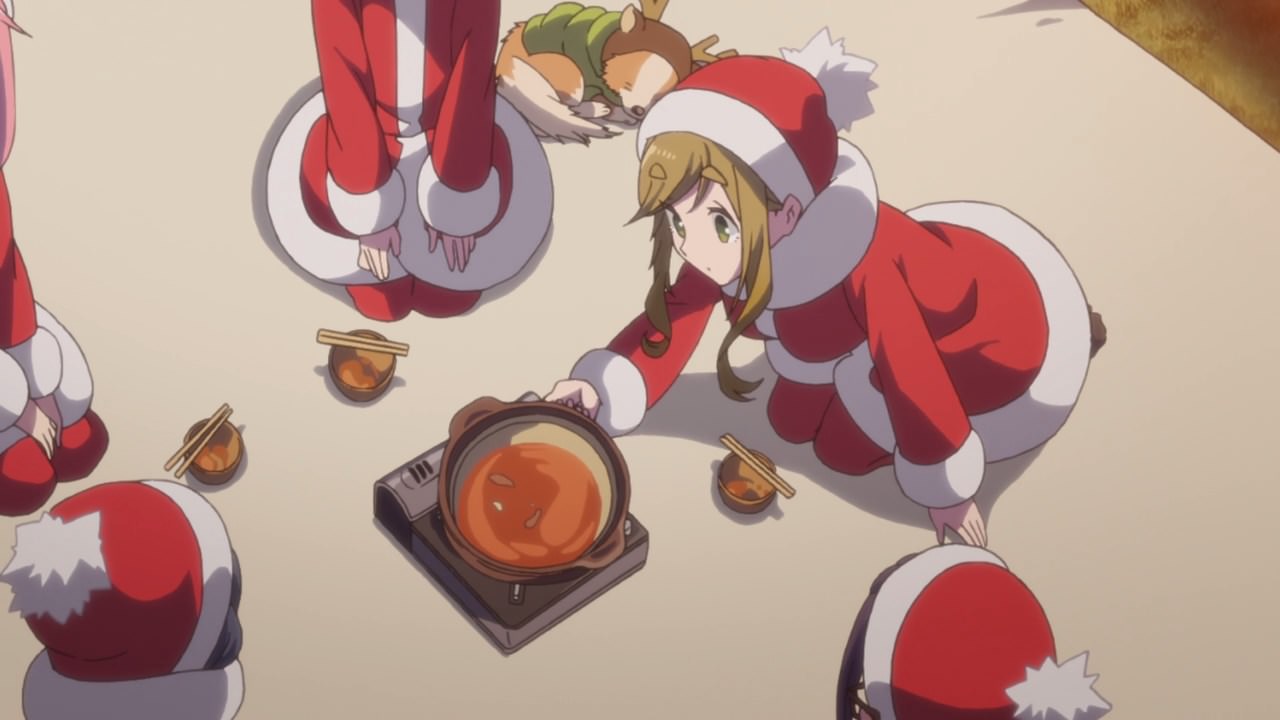 Unfortunately, it looks like this sukiyaki party will be over as the portable stove ran out of gas. Oh, and nobody got a spare stove cartridge which is a bummer. 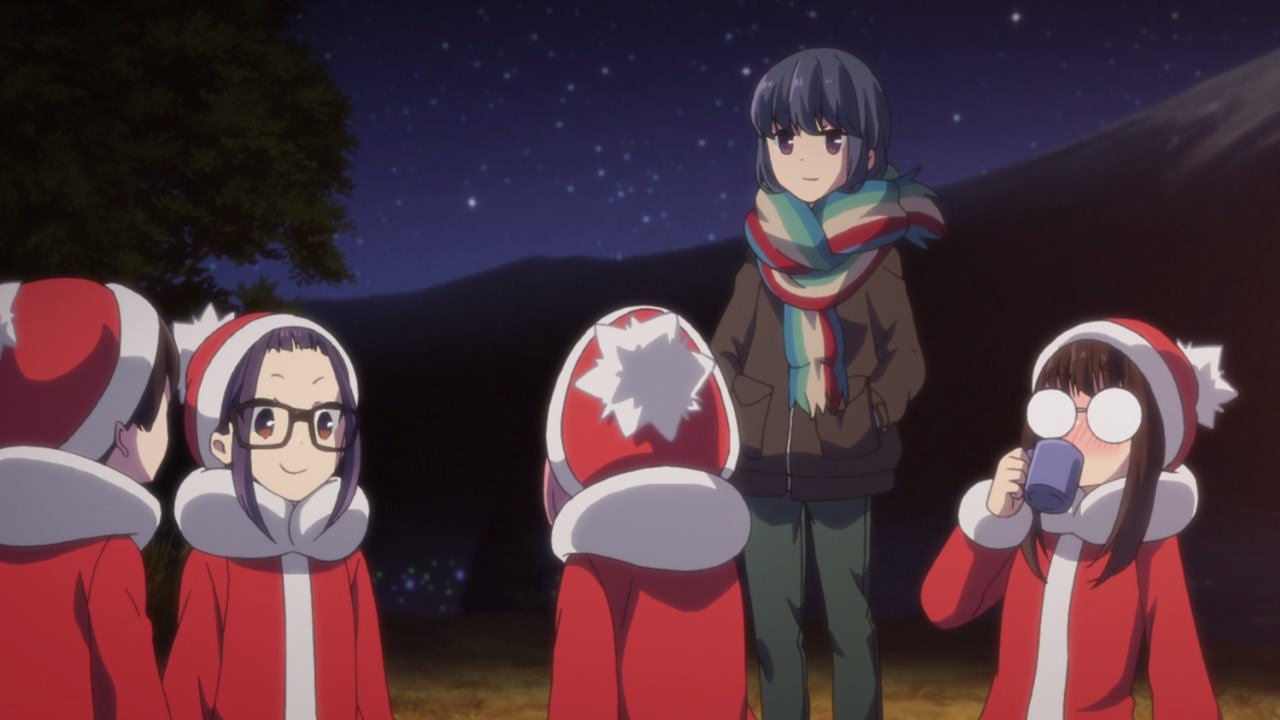 So, Rin Shima volunteered to buy some stove cartridges at a convenience store, which is very far from the camping site that Shimarin will have to go there with her scooter.

Let’s hope that she comes back for another round of eating because it’ll be a waste if the sukiyaki broth was thrown out! 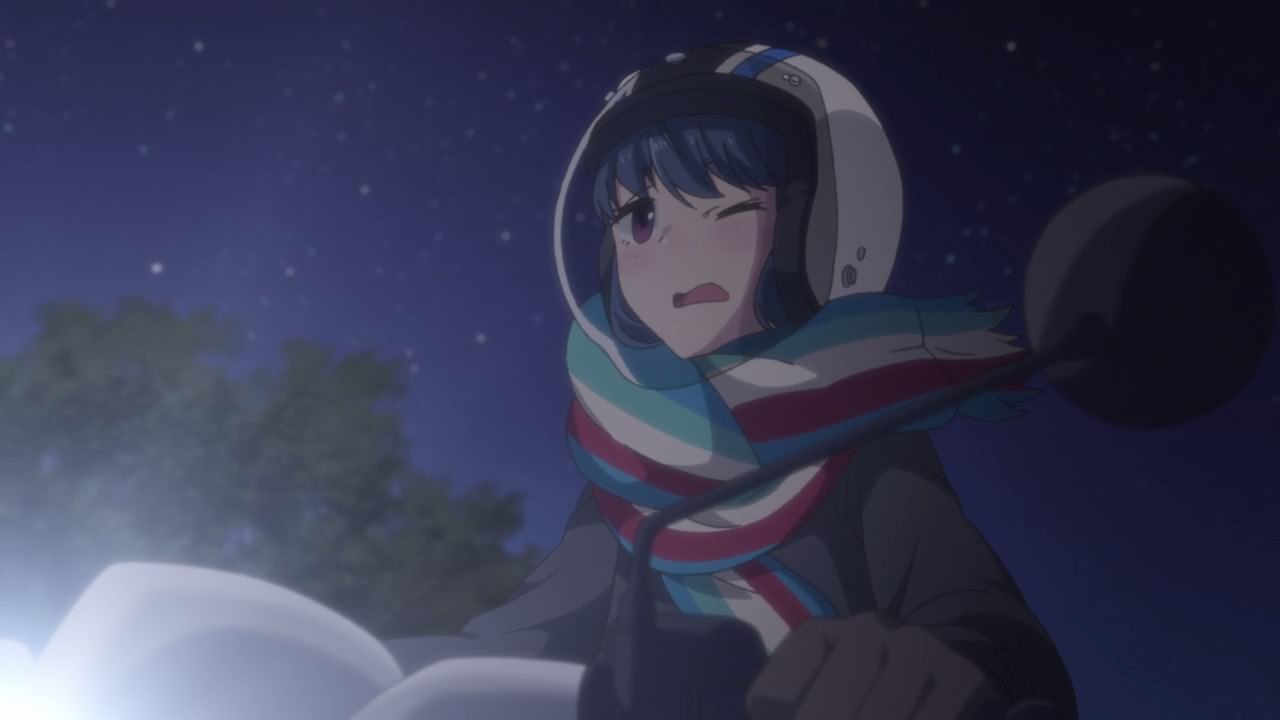 In any case, I’ll see you next time for the final episode of Yuru Camp as Rin Shima goes outside to buy some stove cartridge.

On the other hand, it appears that she loves the experience camping with 3 or more people, which is great because having more people is better!