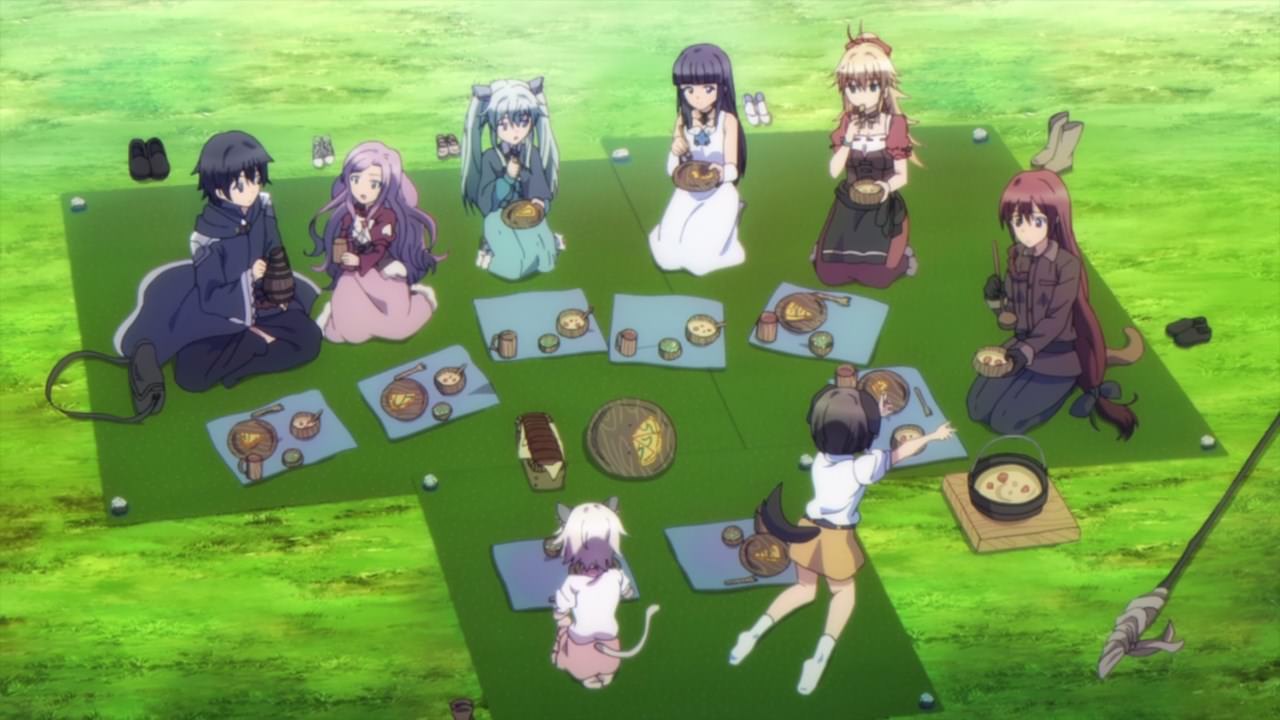 On this episode, Satou and his party are on a journey towards the Bolenan Forest and while it’ll be a long road ahead, they’re enjoying the great scenery along the way.

Of course, they need to rest most of the time and that’s where Satou decides to have a picnic with her female companions. Nice! 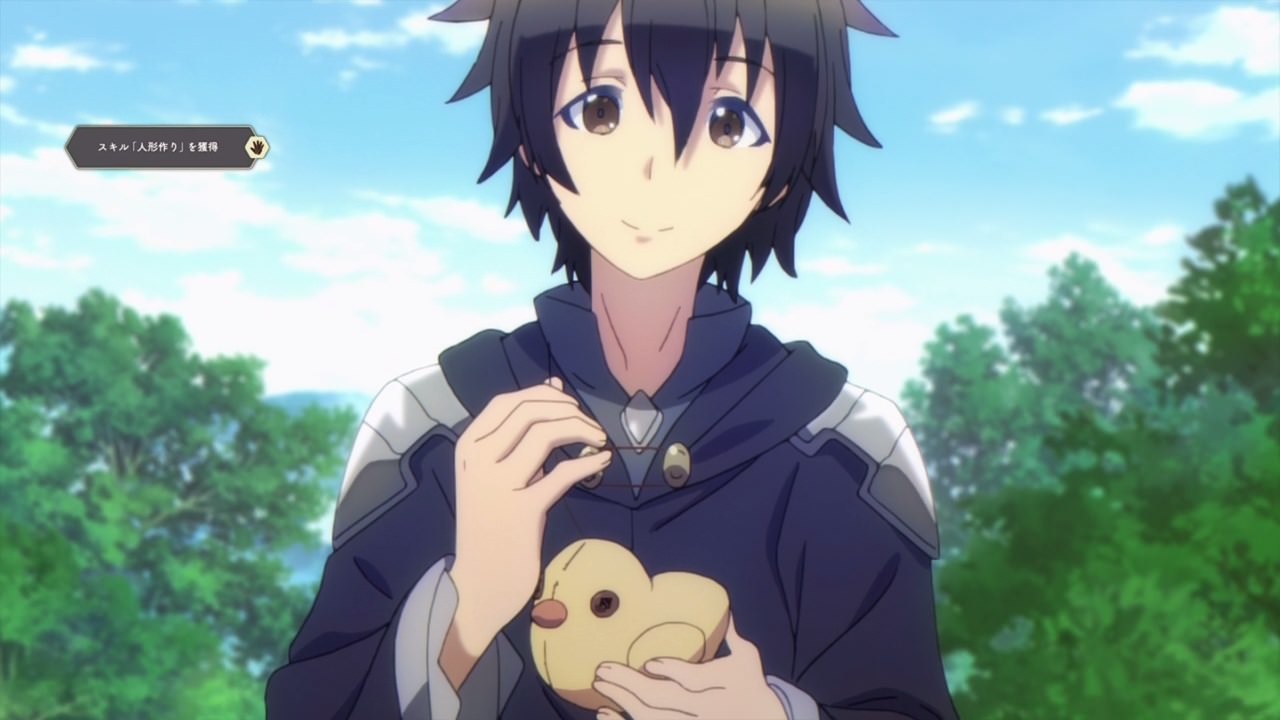 Speaking of Satou, seems that he’s gaining new skills and crank it up to the max, even mundane ones like creating dolls for his harem. 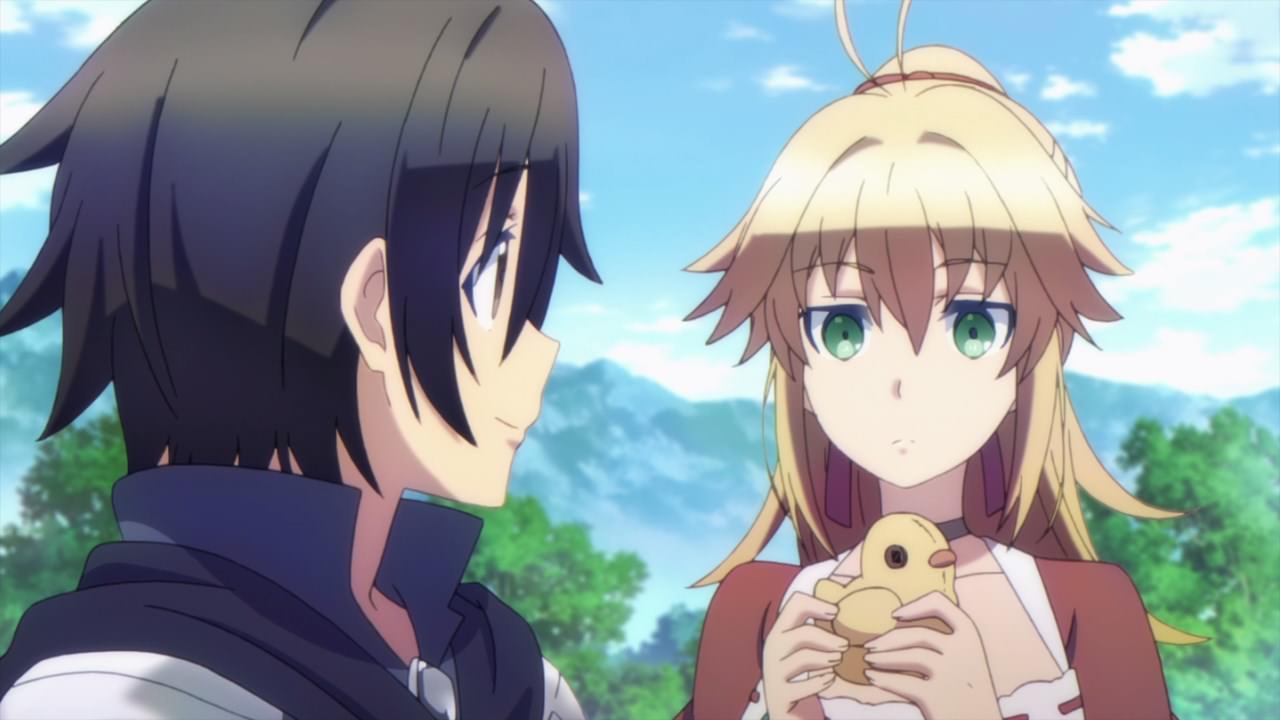 As you can see, Nana is happy that Satou gave her a new duck plushie. He needs to treat his companions well! 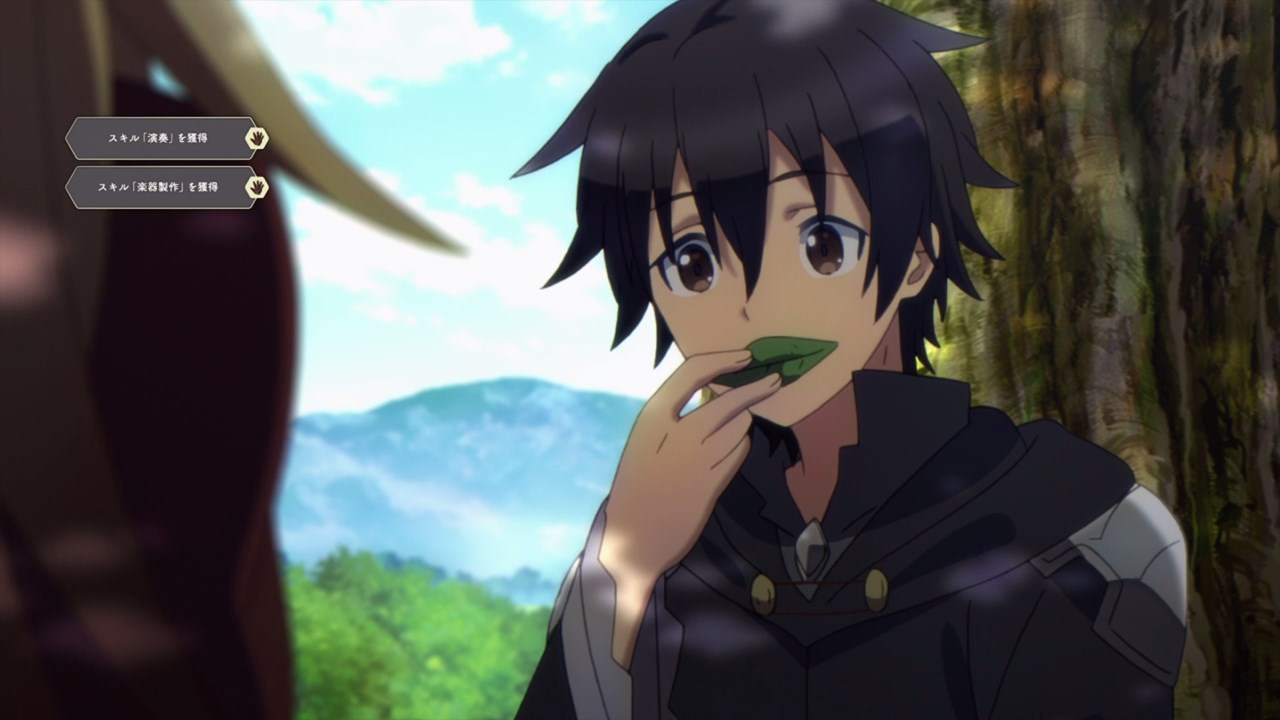 Of course, there are some instances where Satou failed to master like playing an instrument for example. 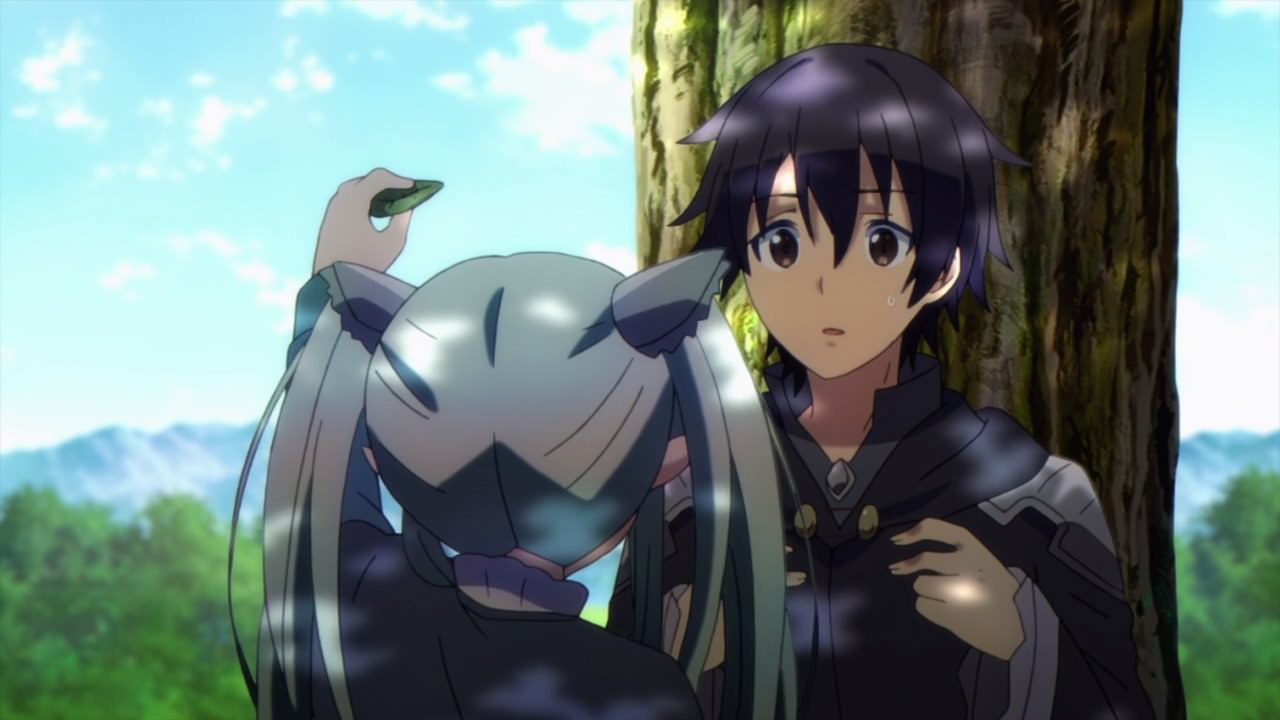 Heck, even Misanaria Bolenan agreed that Satou’s performance is horrible that she took the leaf away from him.

Yeah, maxing your skill won’t make a difference unless you make some practice. 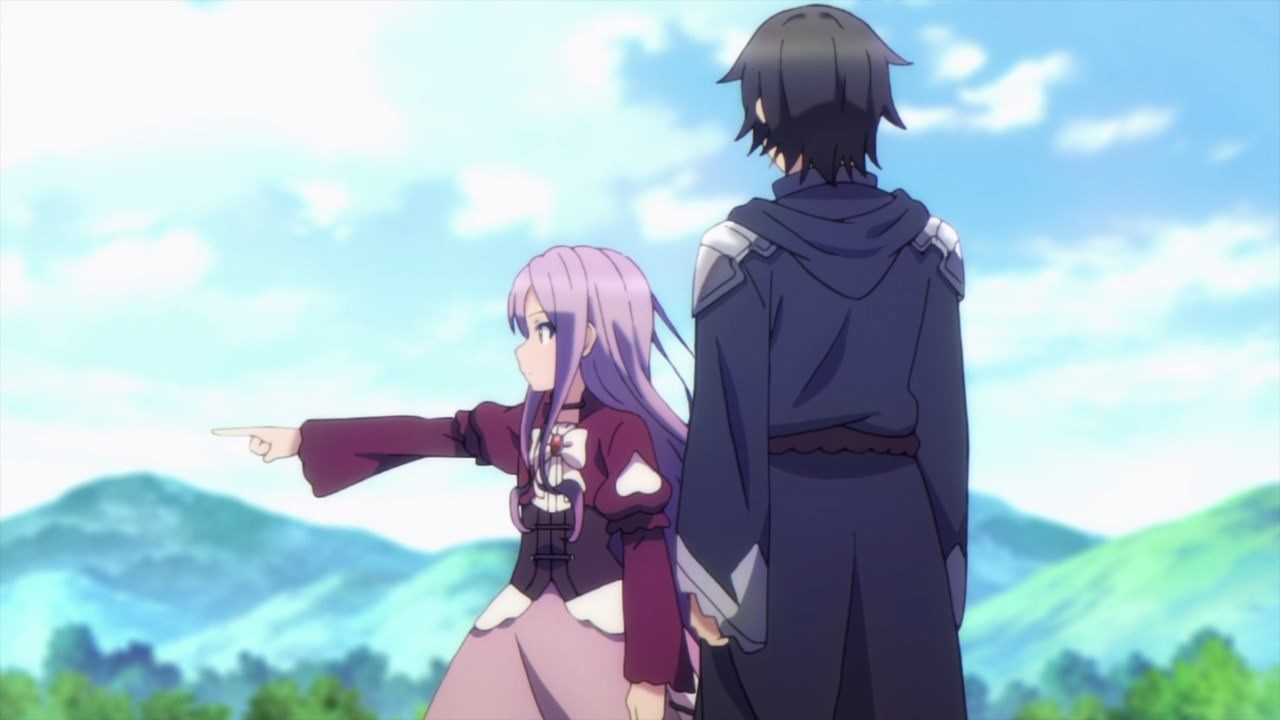 Afterwards, Arisa asked Satou to look at an area that might be familiar to his original world. Well, Arisa came from the original world but she wants Satou to check it out. 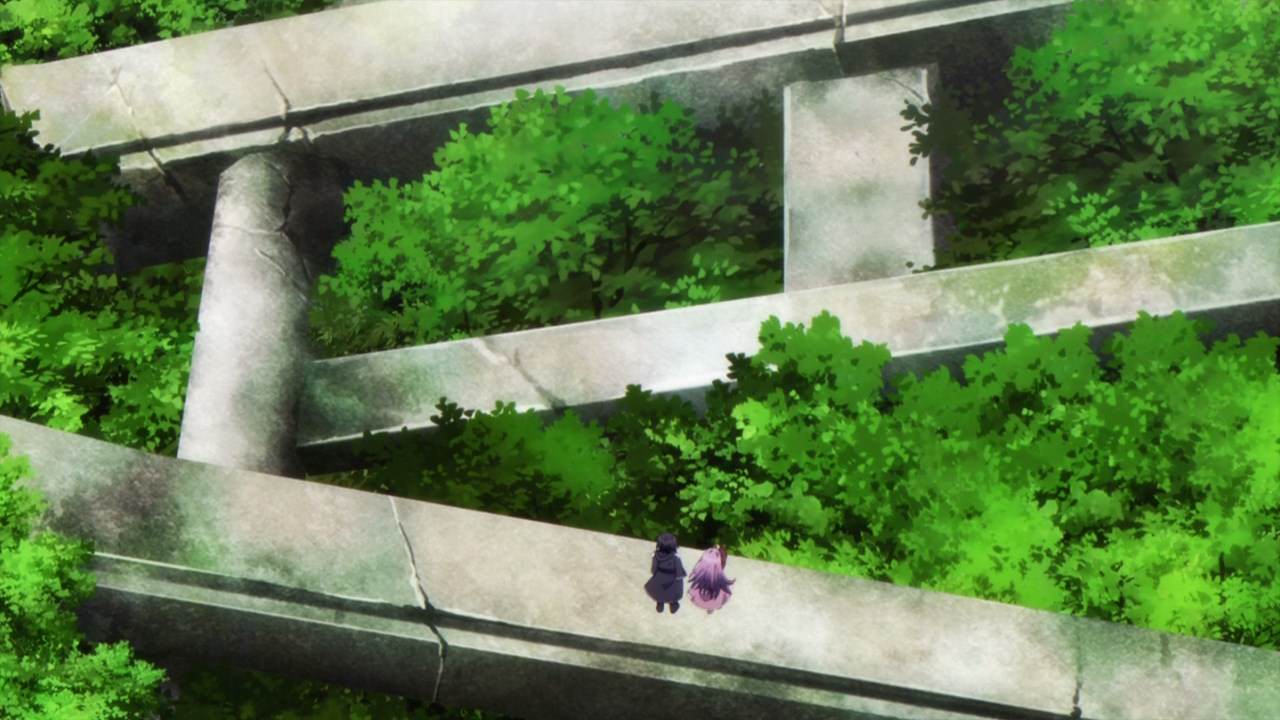 Anyways, it turns out that there’s a pile of stone torii in which this place used to have a shrine of sorts or even a Travel Gate. 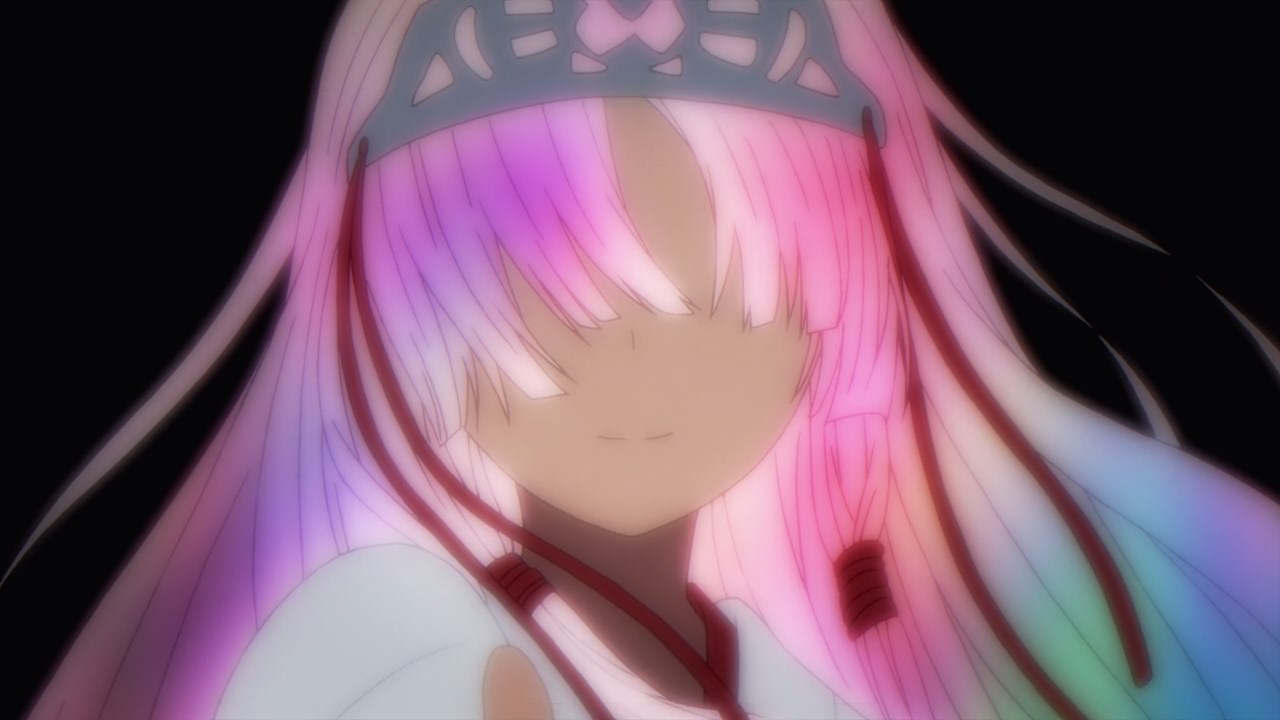 Speaking of torii gates, Satou experienced a flashback in which he met a girl with rainbow hair, talking about reincarnation and other stuff related to parallel worlds.

While it’s nice that there’s some mystery added on this show, I’d doubt that it’ll be brought up again once this series reached the last 2 episodes. Heck, I don’t think Satou will meet this girl again at some point. 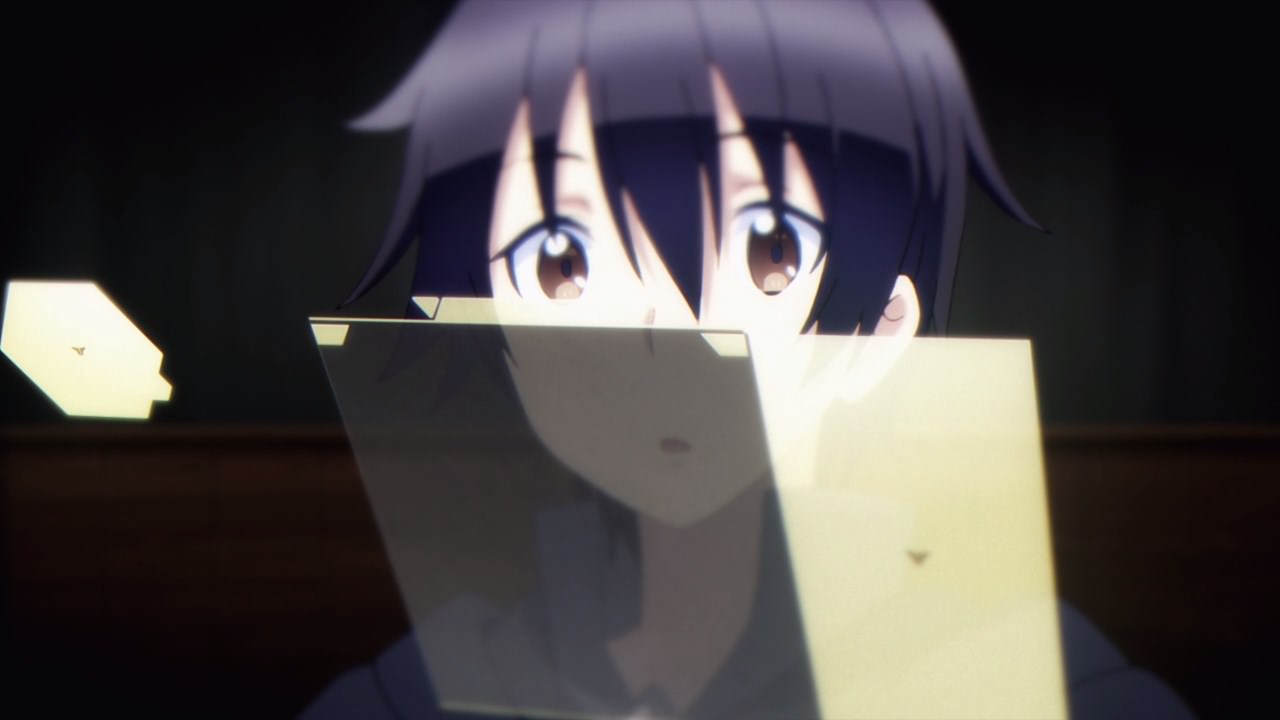 But let’s go back to Satou as he’s studying magic, especially the ones that Zen learned during his lifetime.

While the magic spells is similar to programming languages that Satou is familiar with, it appears that it’s hard to learn it all even the simpler ones. 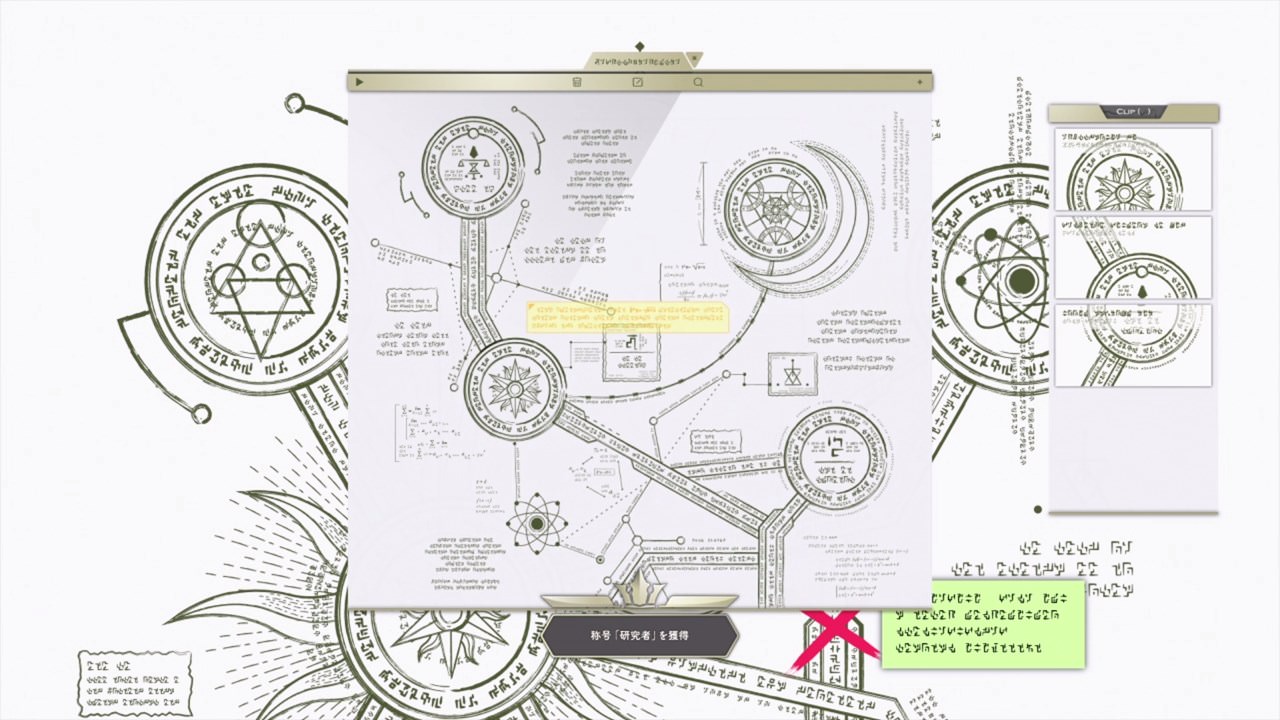 However, it doesn’t mean that Satou will give up on learning shadow magic as he can copy and paste various chants to form his own magic spell.

It might be cheating or lazy, but Satou will do anything to master every magic that he could find.

But then again, it appears that he’s mastering his groping skills instead. Oh Satou, you were supposed to learn magic, not grope someone’s tits! 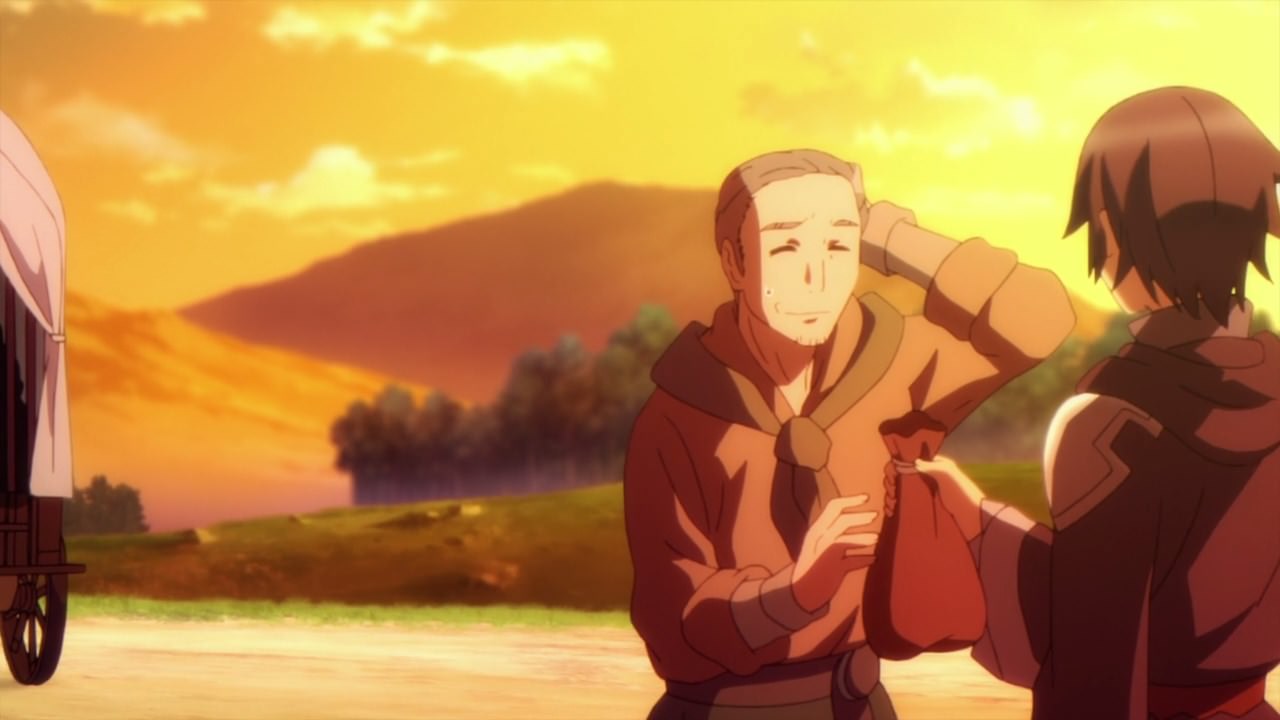 Moving onto the next scene where Satou met a slave trader who has a pack of wererats, probably from Red Mask’s knight order.

Without wasting any time, Satou decides to take the chance to buy the wererats from this slave trader. 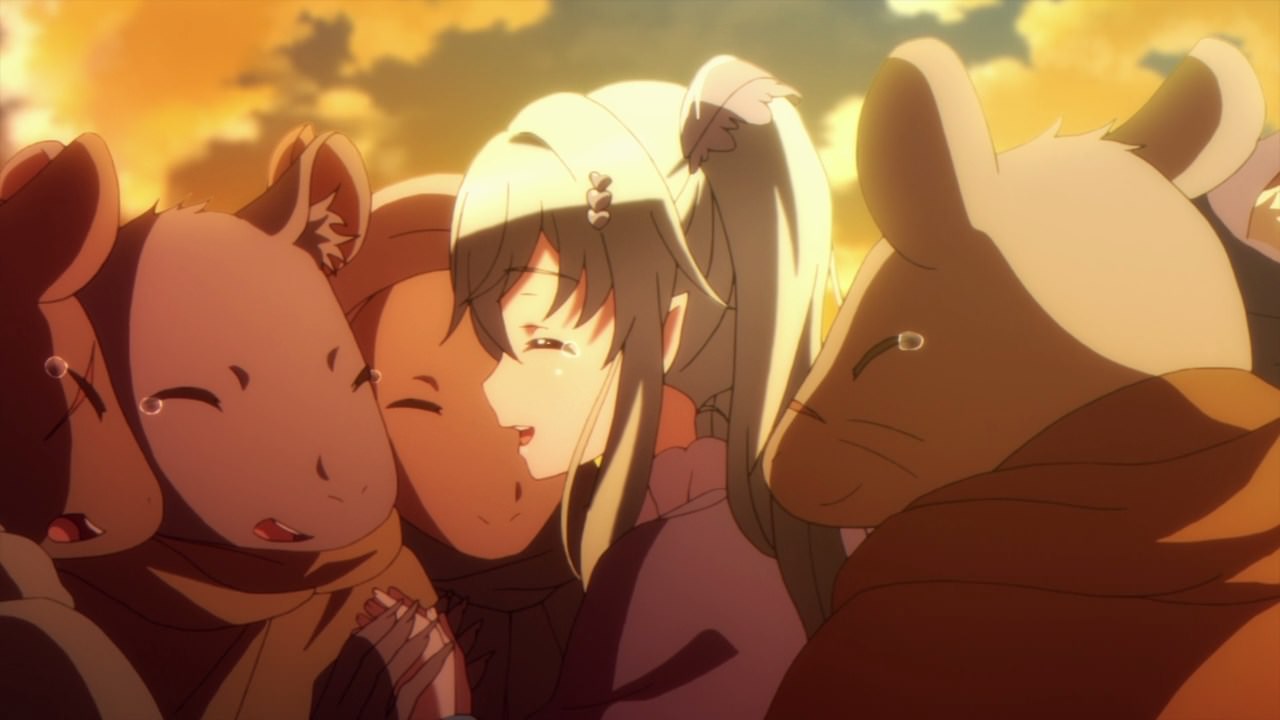 And thanks to Satou’s generous effort, the wererats are freed where they’re delighted to see Mia again. Isn’t it great that he’s doing good for all living creatures. 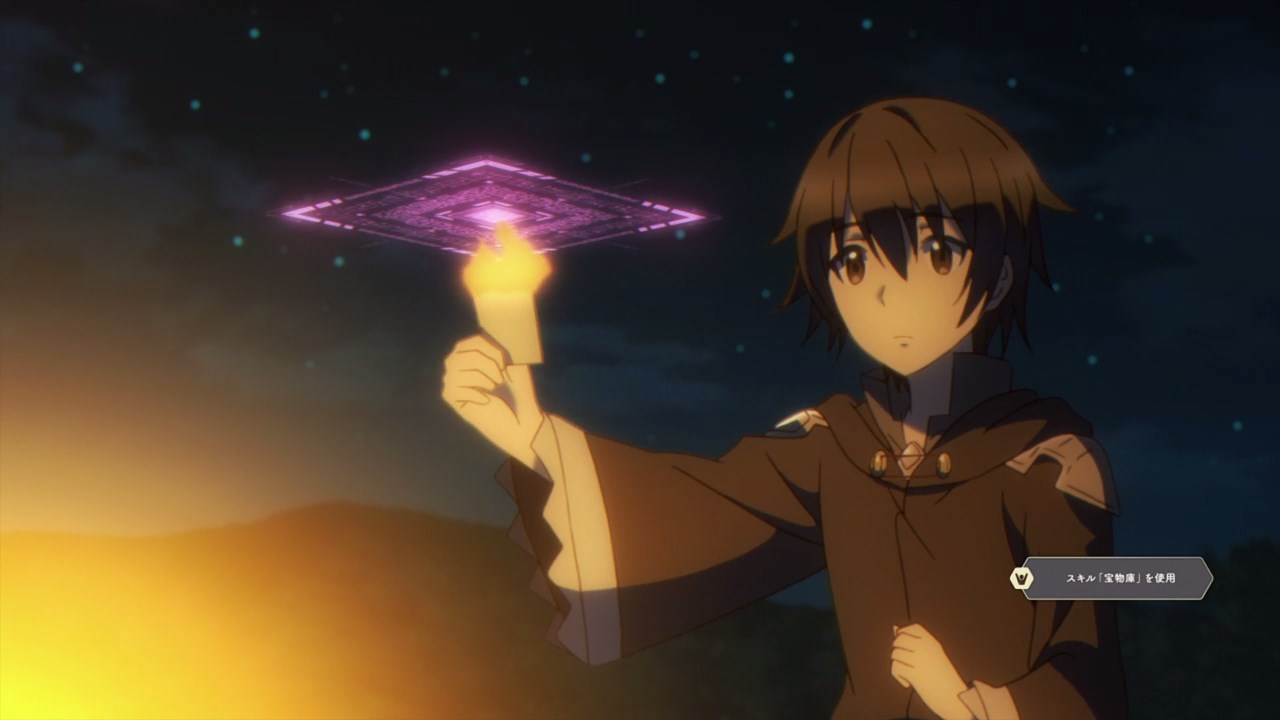 Lastly, here’s Satou again as he’s conducting experiments like using the storage to separate components or put stuff that are active like a burning paper.

Yeah, it’s dangerous to put something that’s burning, but Satou is taking the risk because he’s the overpowered main character that’s why. 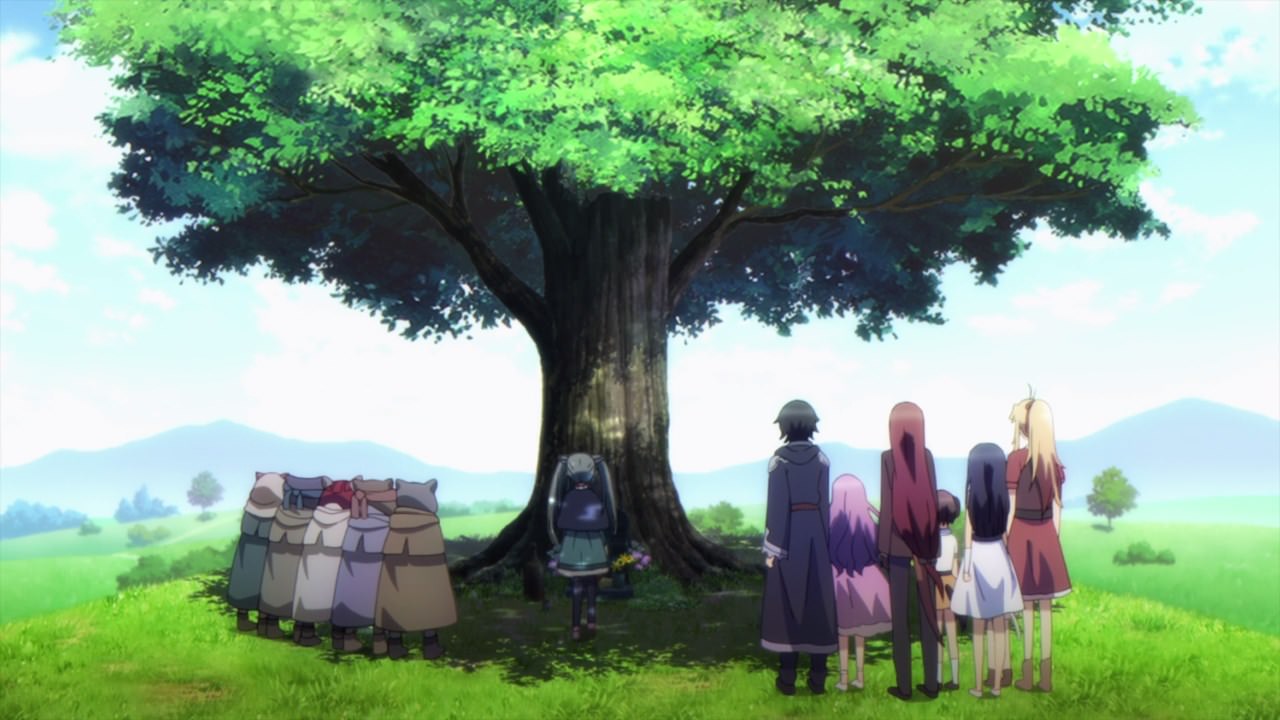 In any case, they finally arrived at the Bolenan Forest where they’re greeted by Mize and his fellow wererats.

But first, Satou and his party went to the gravestone where Misanaria offered her prayer to those wererats, who risked their lives to protect their princess. 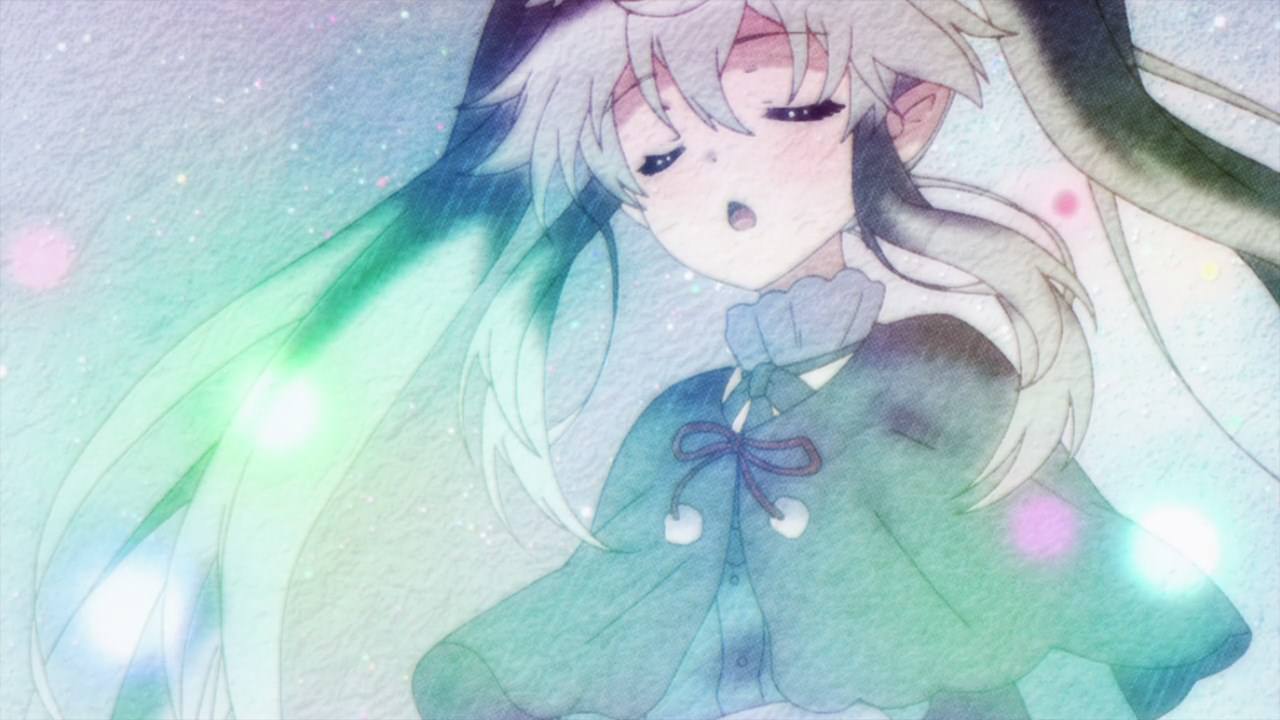 And as you can see, Mia sang in order to let the wererats’ souls rest in peace. I must say that this scene is very calming to watch after all that happened in previous episodes. 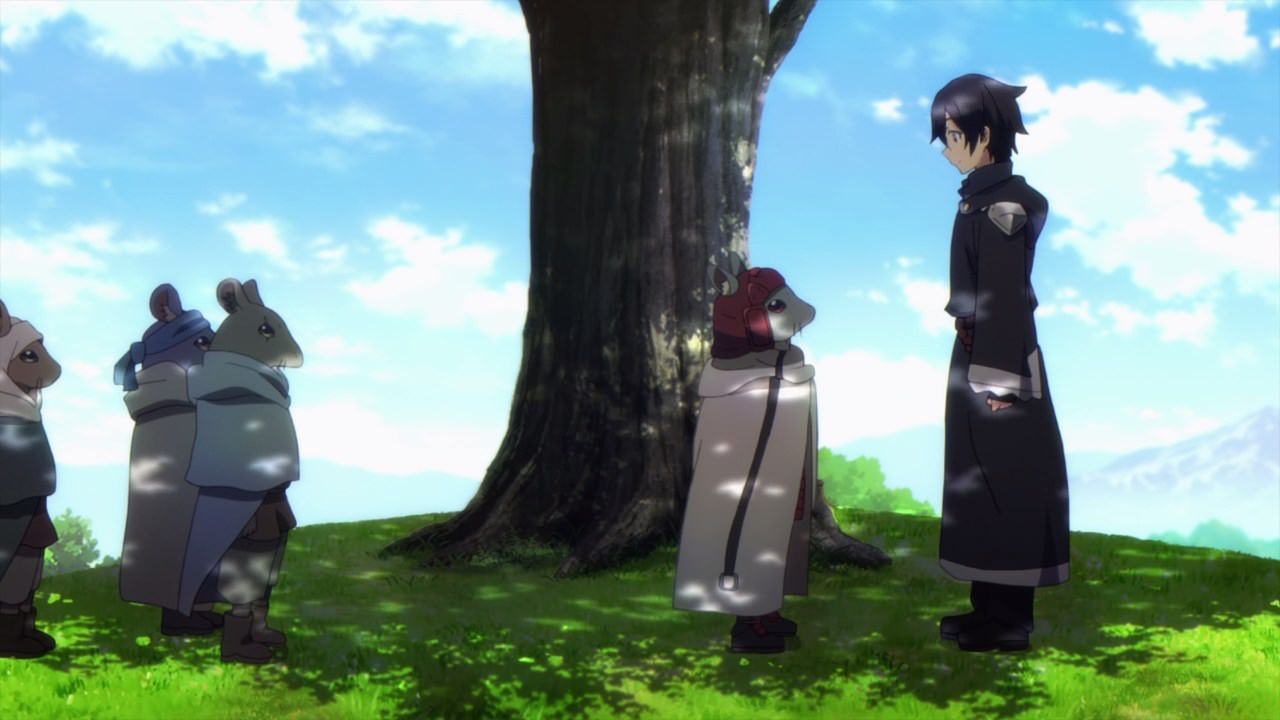 One last thing, here’s Mize as he offered Satou a present for rescuing Misanaria from Zen the Undead King. 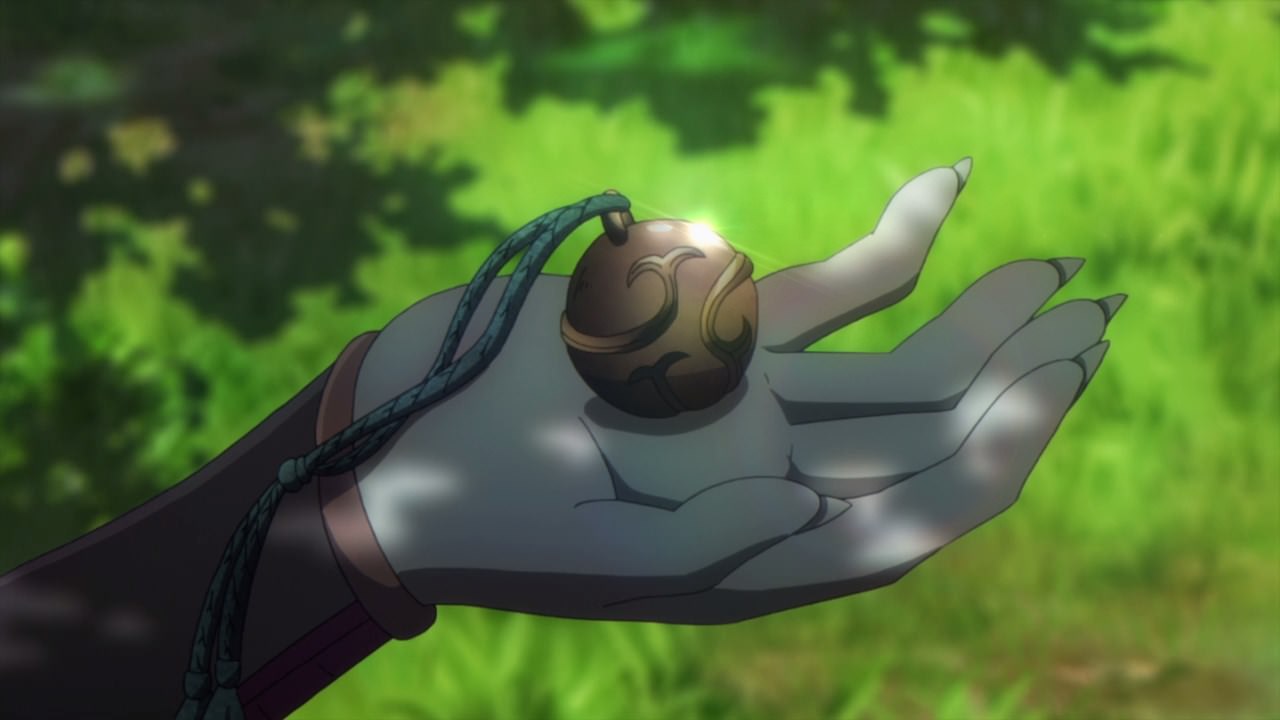 It’s a bell where it’ll protect Satou from various dangers as well as a symbol of their friendship between him and the wererats.

But that’s about it for this episode as we’re getting closer to the finale!