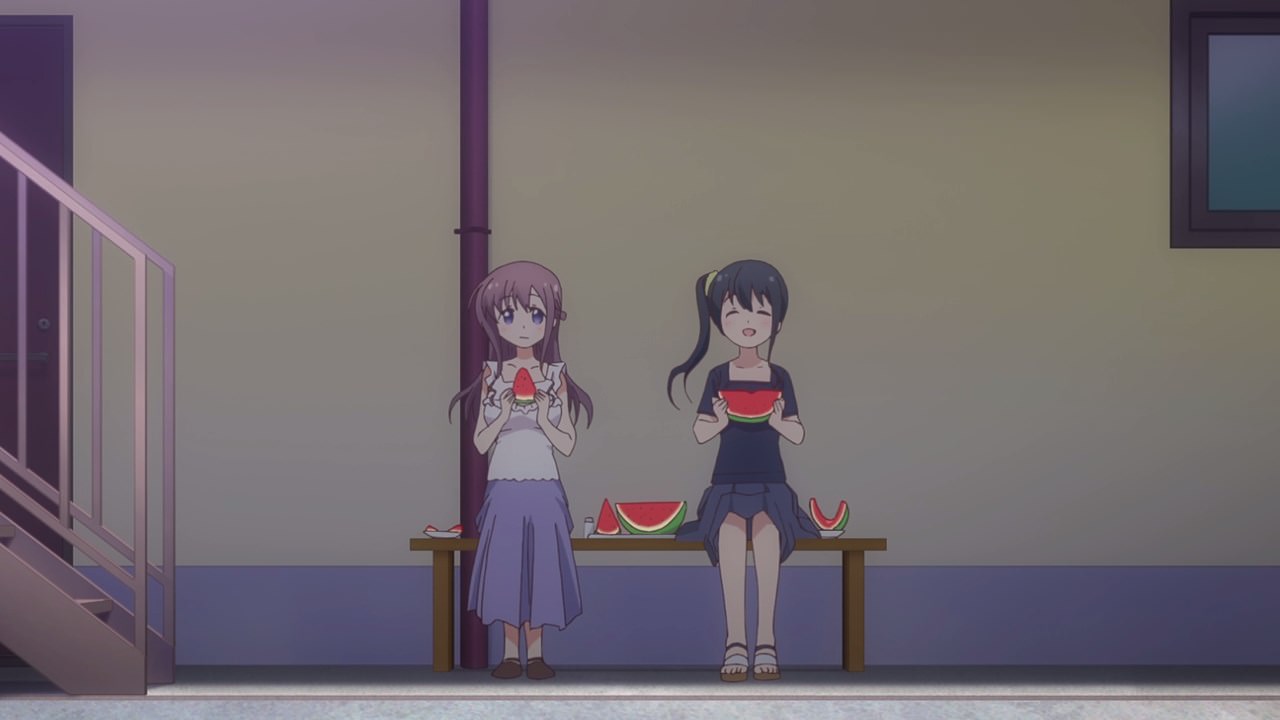 On this episode, both Shion Kyouzuka and Hiroe Hannen are spending their summer vacation outside their apartment and eating watermelons.

C’mon, they need to cool themselves down for this penultimate episode! 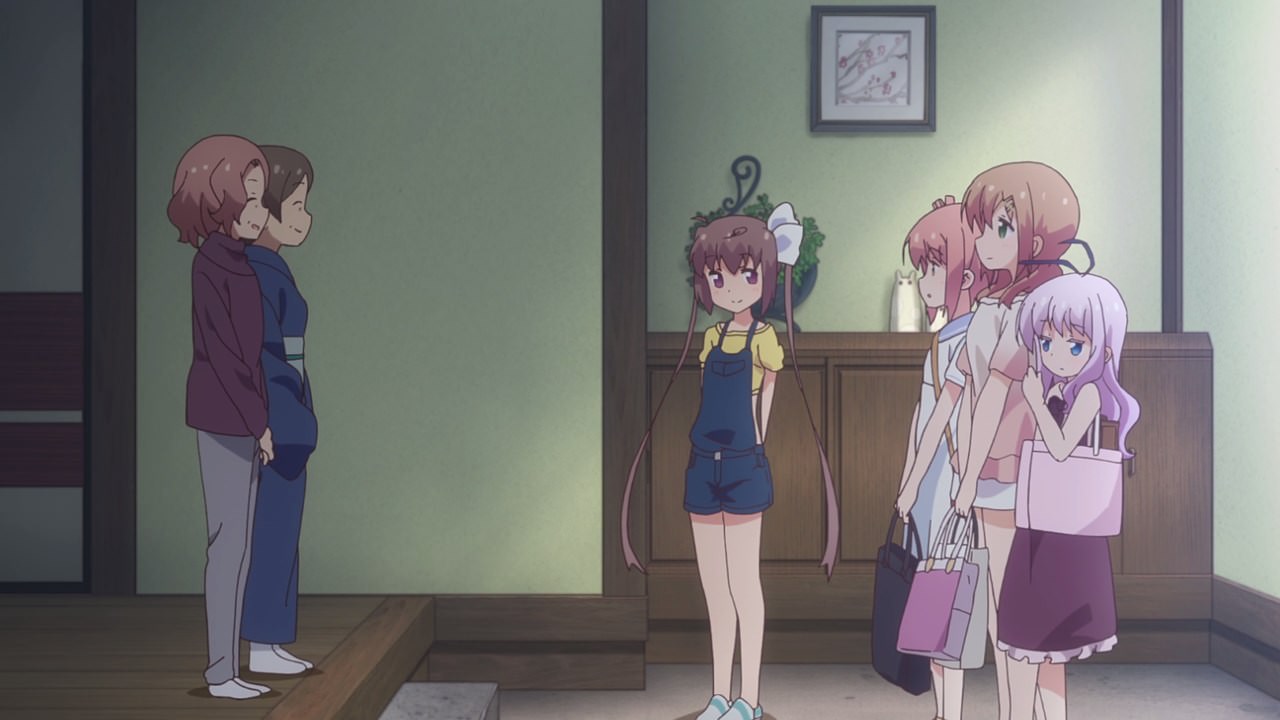 But anyways, Hana Ichinose and her friends went to visit Tamate Momochi’s mansion where they’re greeted by Tama-chan’s mother and grandmother.

Isn’t nice that Hana-chan, Kamuri, and Eiko are very welcome at the Momochi residence. 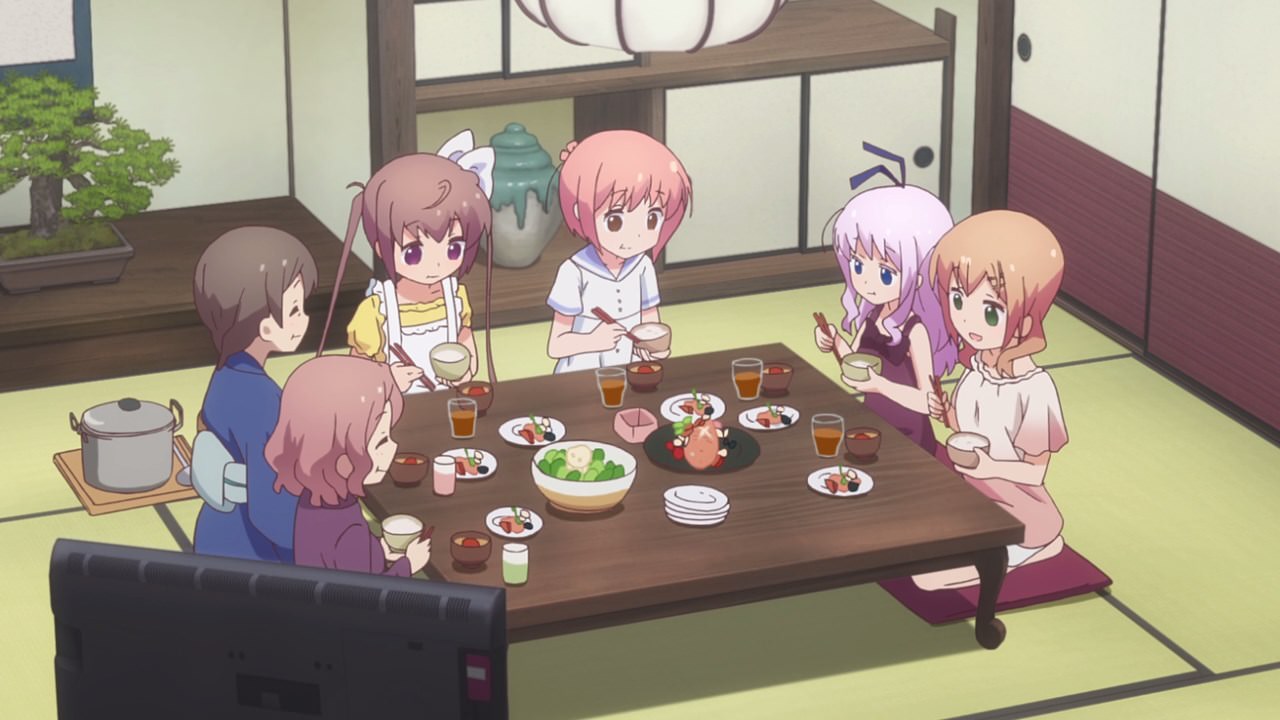 Heck, Tama-chan and her relatives gave them a good meal for their guests. I mean, hospitality is very important!

Now that they’re satisfied with the Momochi household’s cooking, it’s time to hit the festival. 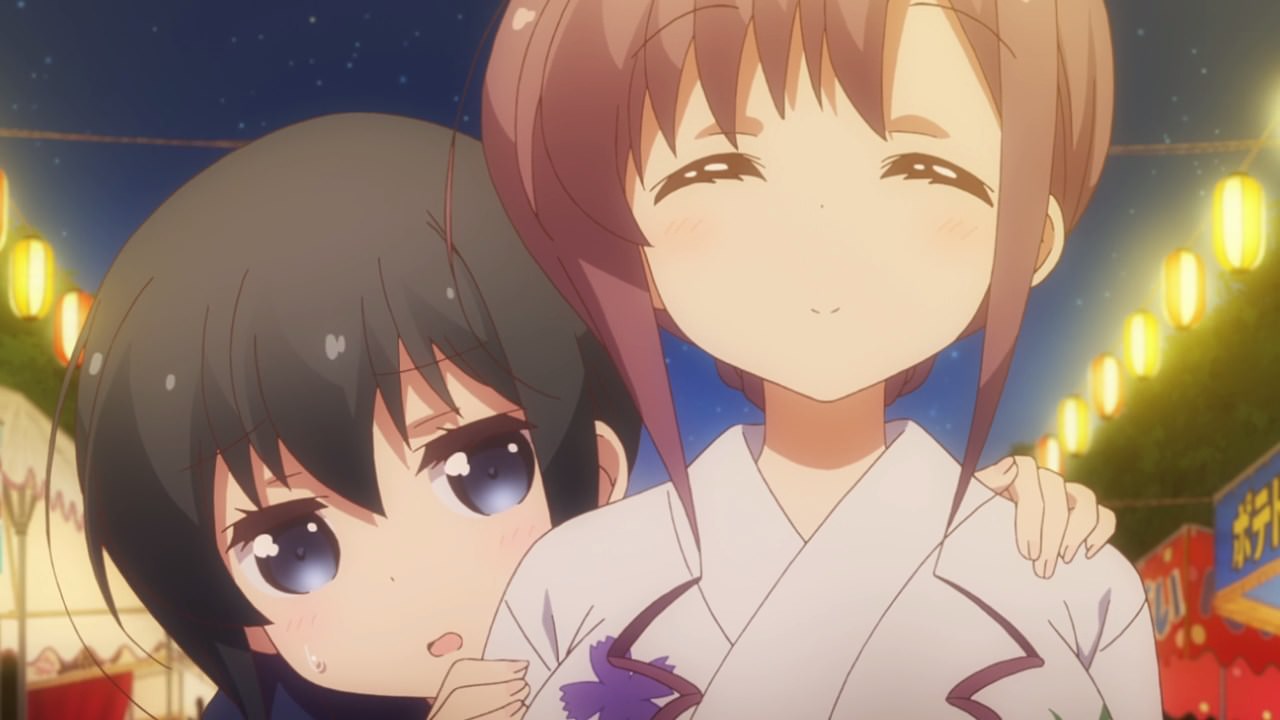 Of course, let’s not forget about Hiroe Hannen and Shion Kyouzuka as they went to the festival.

Then again, Hiroe-san seems so nervous but c’mon, she needs to be brave especially when Hannen will attend summer school. 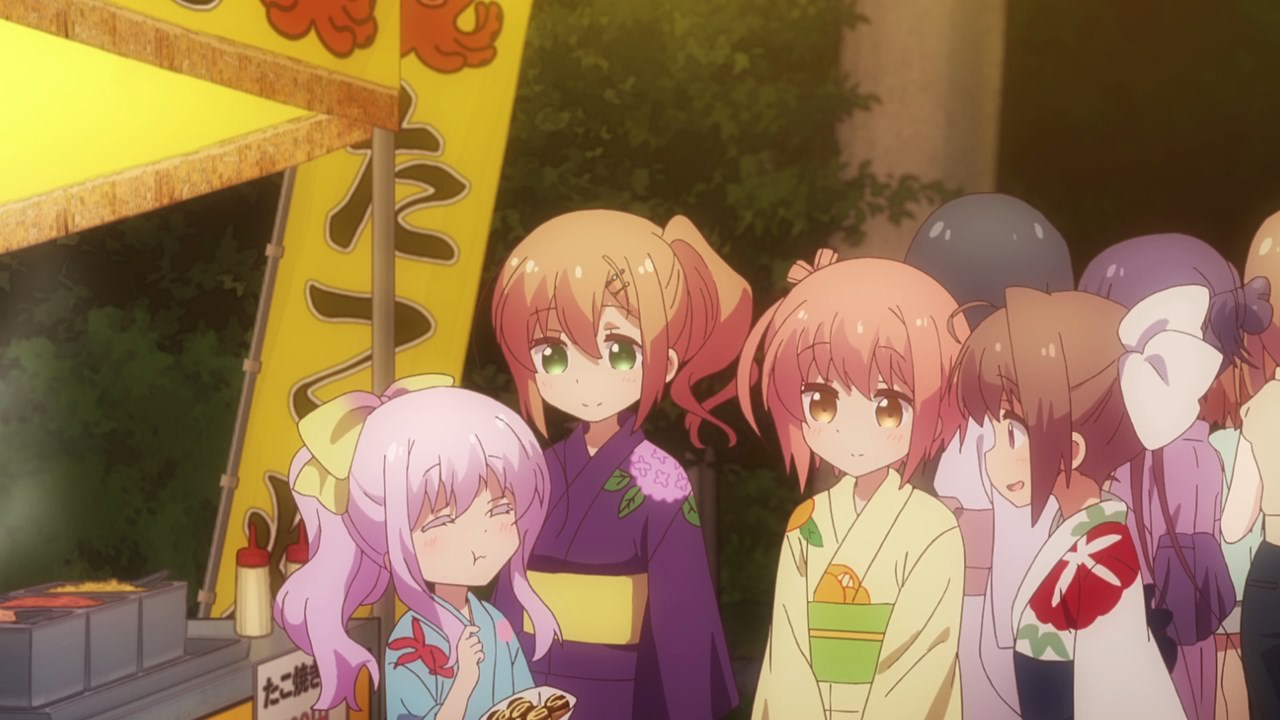 And here are the girls as they’re enjoying the food stalls, especially Kamuri Sengoku when she ate some piping-hot takoyaki balls.

I have to say that she didn’t get herself burned by eating hot foods. 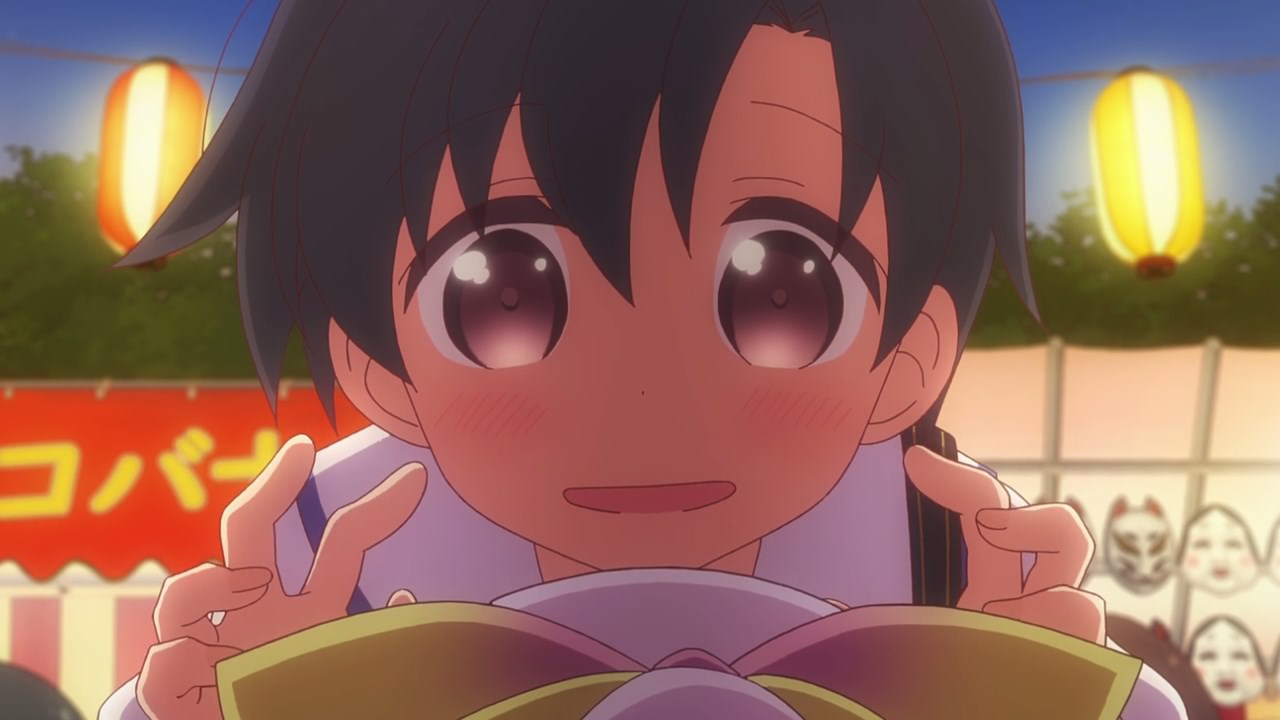 Oh yeah, it appears that they met some classmates from their school like this track and field club member named Amane Otani… 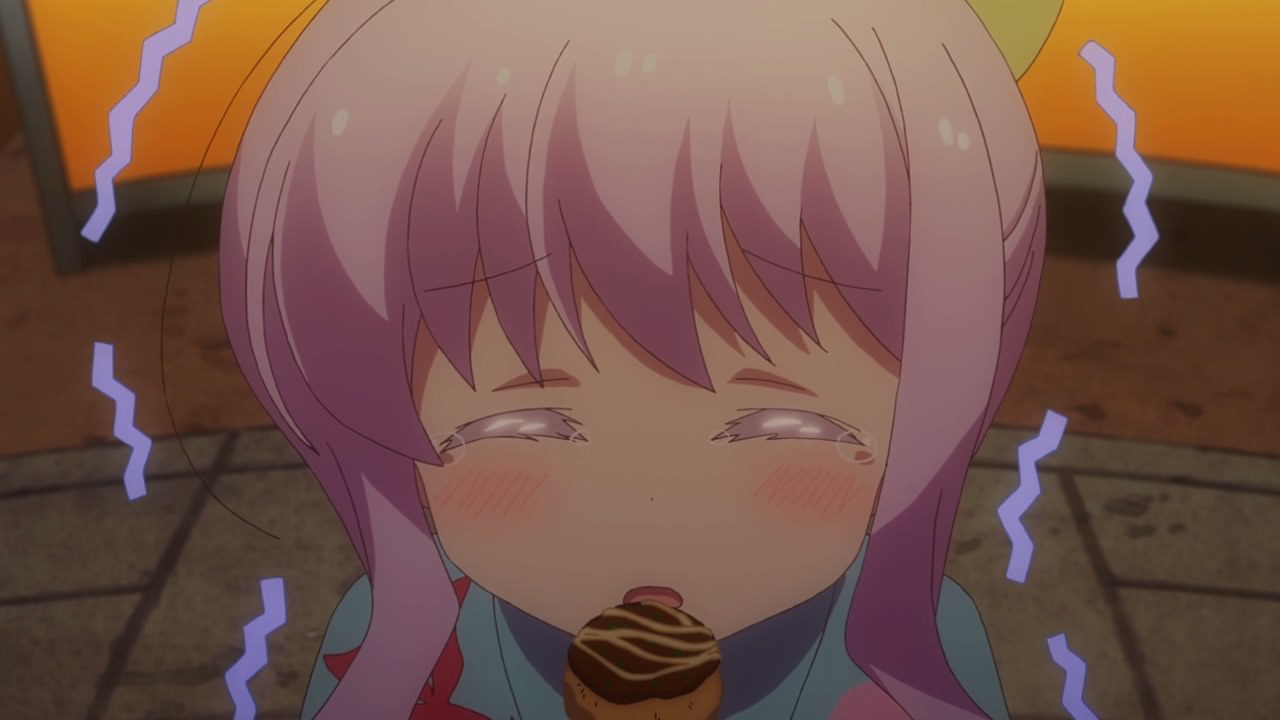 …who is very attracted towards Kamuri Sengoku. Uh Amane, I think Kamu-chan is scared at you right now! 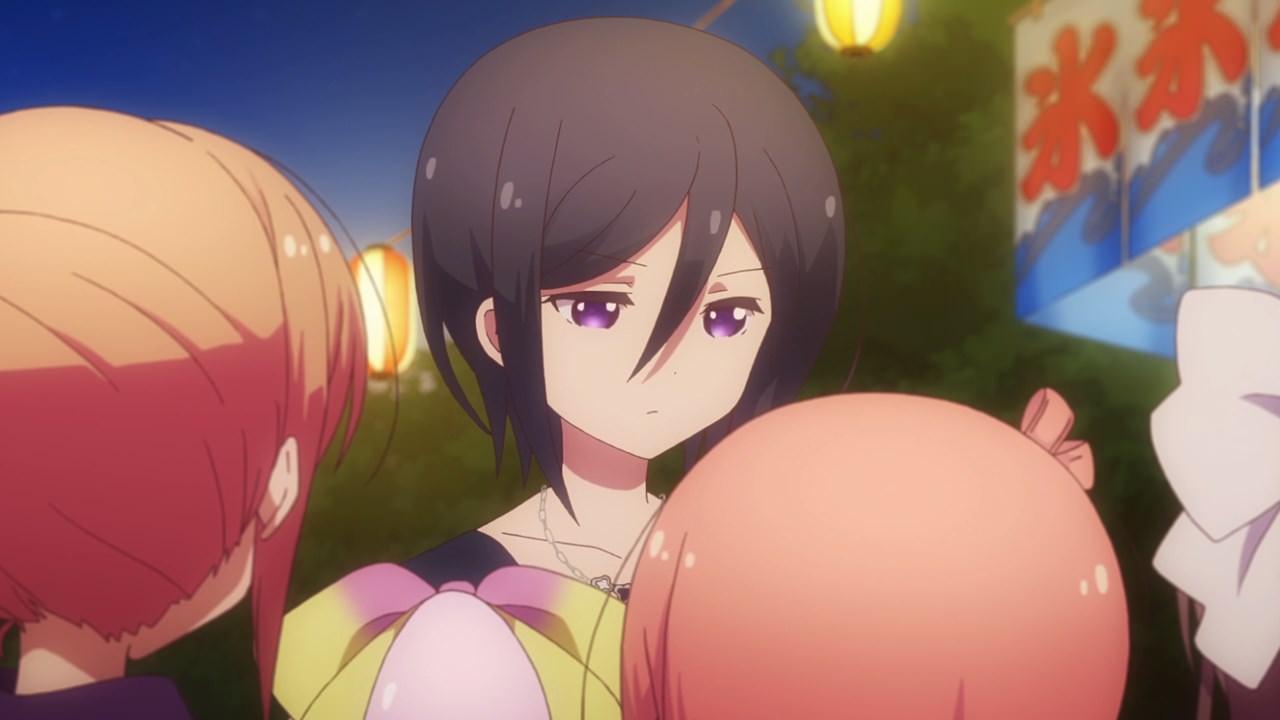 Lastly, they met Kiyose Enami as she’s currently patrolling the area. After all, she doesn’t want troublemakers causing a ruckus at the summer festival. 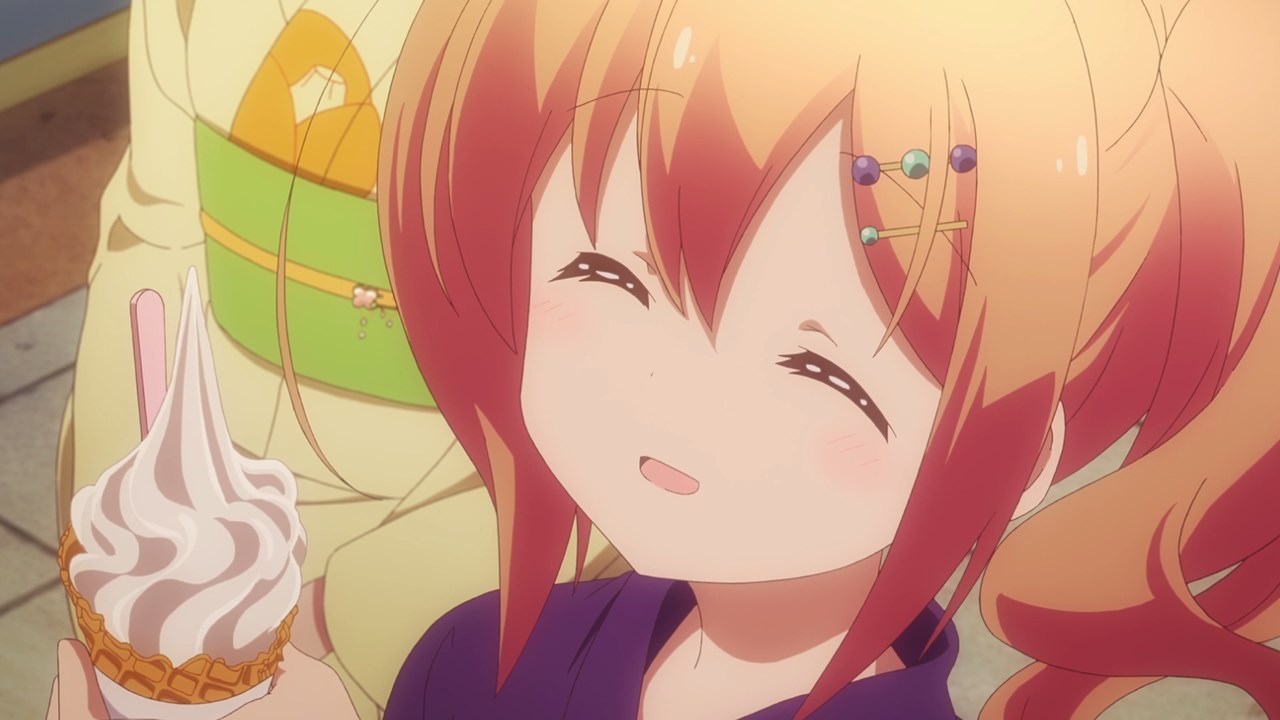 On the other hand, Eiko Tokura offered Enami-sensei some soft-served ice cream. Isn’t it nice that a student is offering a teacher for a dessert. 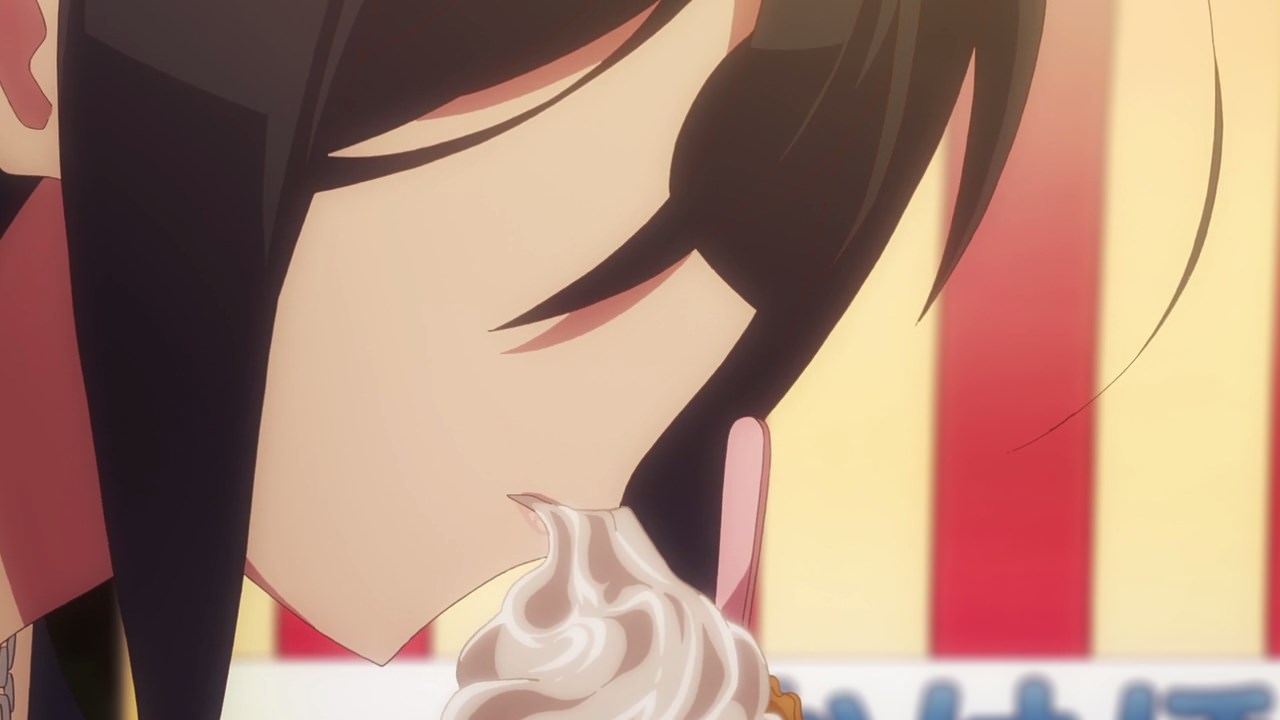 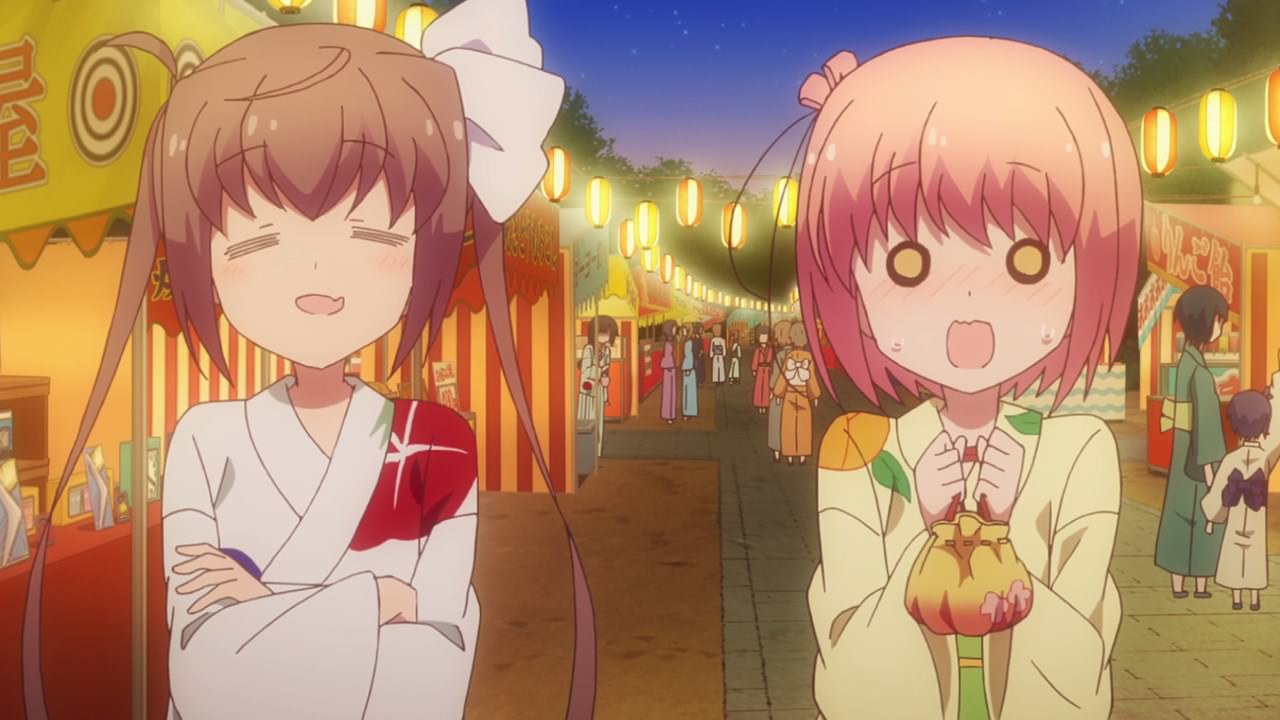 Then again, it seems that once Enami-sensei took one bite of the ice cream, everyone reacted in various ways ranging from Tama-chan getting thrilled to Hana-chan thinking that it’s somewhat a lewd move from Eiko.

I must say that Eiko Tokura is shaping up to be the harem queen on this series. But wait, where’s Kamuri? 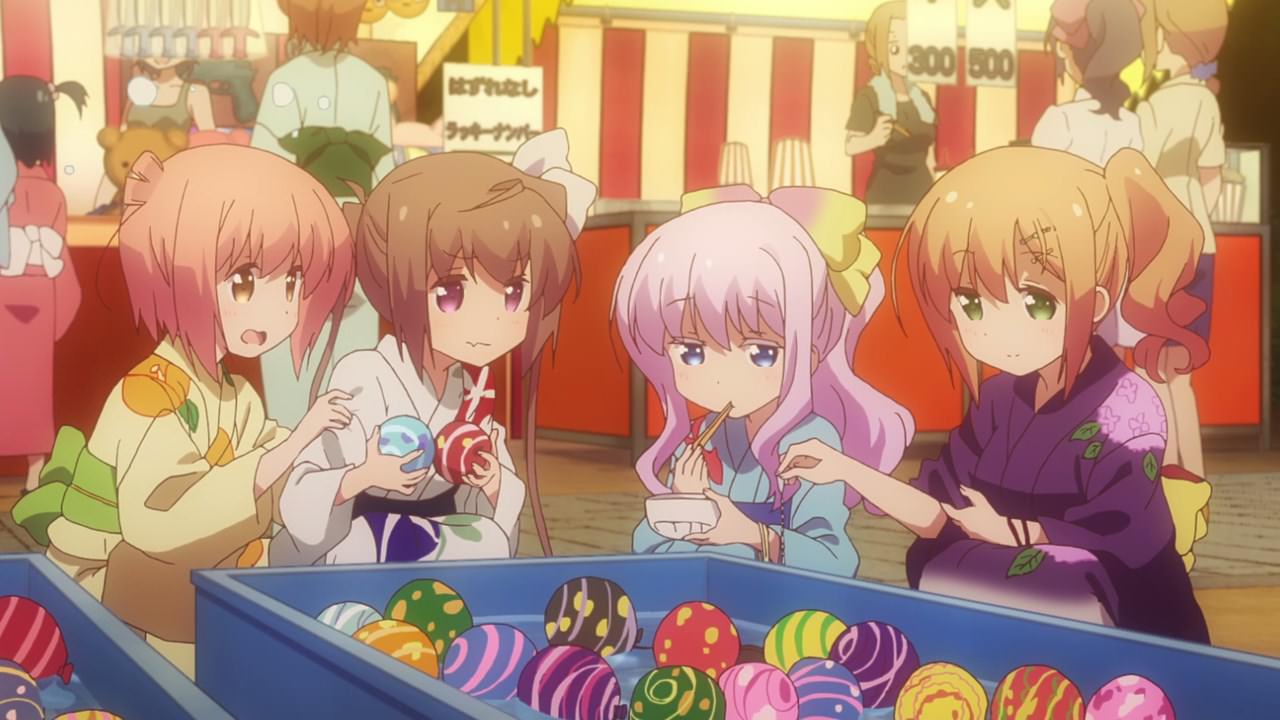 Afterwards, the girls went to various stalls to push their luck and have fun with it. After all, it’s not just food stalls, but there’s also amusement stalls where you play a game until you win something. 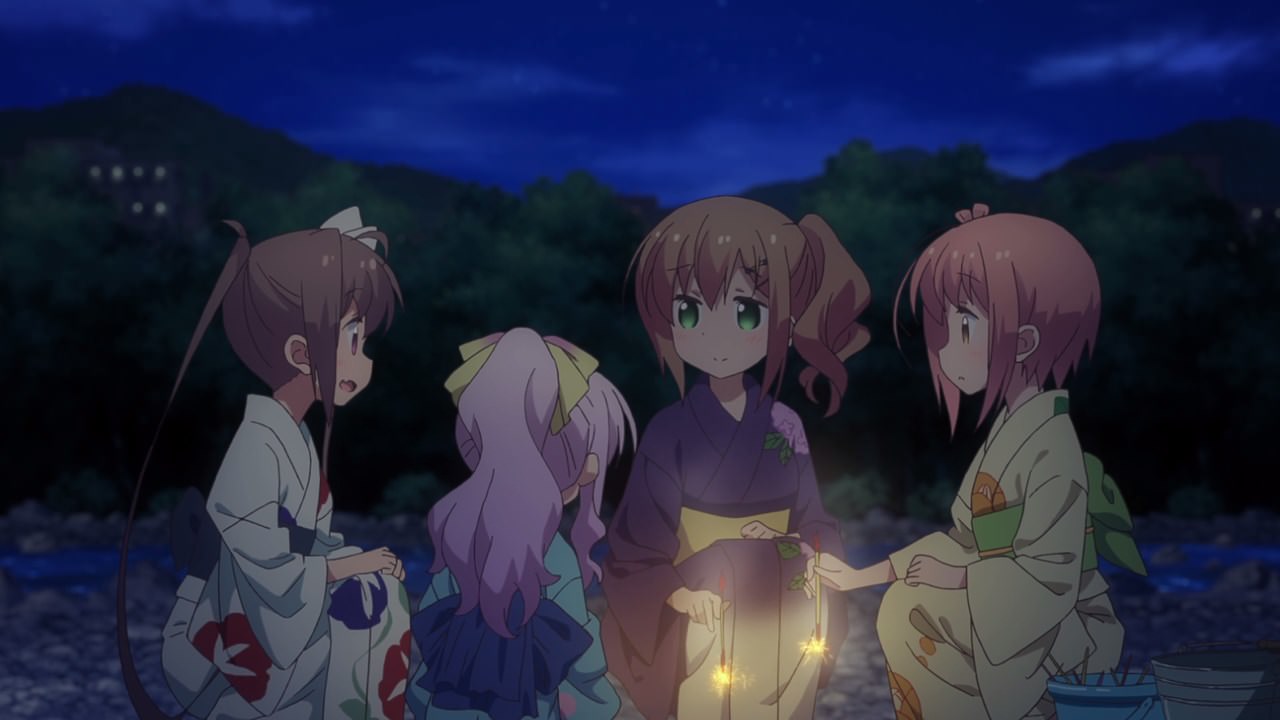 Fortunately, Tamate Momochi won some sparklers as a prize and they use it after they’re done visiting the stalls.

But wait, the summer festival won’t be complete without some real fireworks. 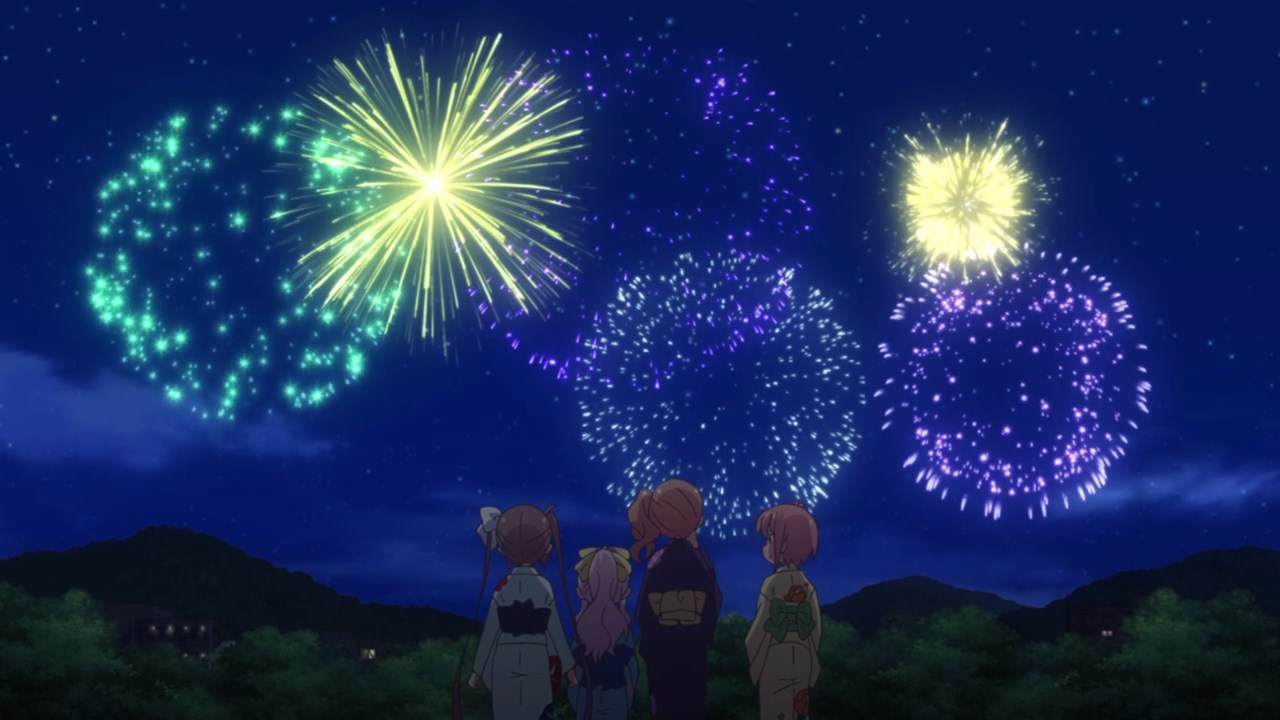 Then again, seems that the festival got it covered as the girls are amazed to see a fireworks display the close this festival out.

And that’s the end for Episode 11 as next week will be the finale. I wonder if Hana Ichinose will tell the girls that she’s older than them, or will she remain it a secret to everybody? We’ll find that out on the final episode!