Darling in the FranXX Episode #11 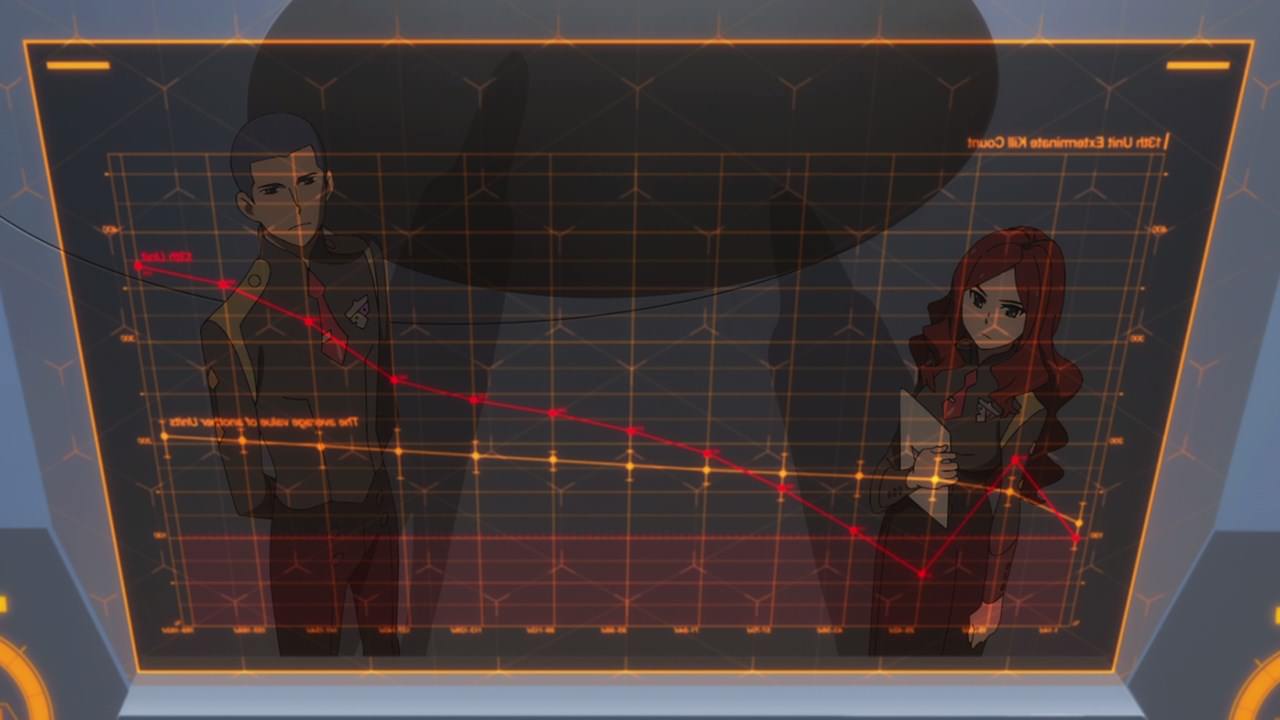 Here’s both Hachi and Nana as they’re impressed on Plantation 13’s FranXX team’s statistics ever since Papa and the council assembled them, and the whole squad is getting better with the arrival of Code:002 “Zero-Two” and Strelizia.

Of course, both Hachi and Nana are perplexed on what Dr. Franxx is aiming for these kids in the future, unless the inventor of the mecha decides to dispose them much like Papa and the council are planning to do once they outlived their usefulness. Then again, we’ll never know… 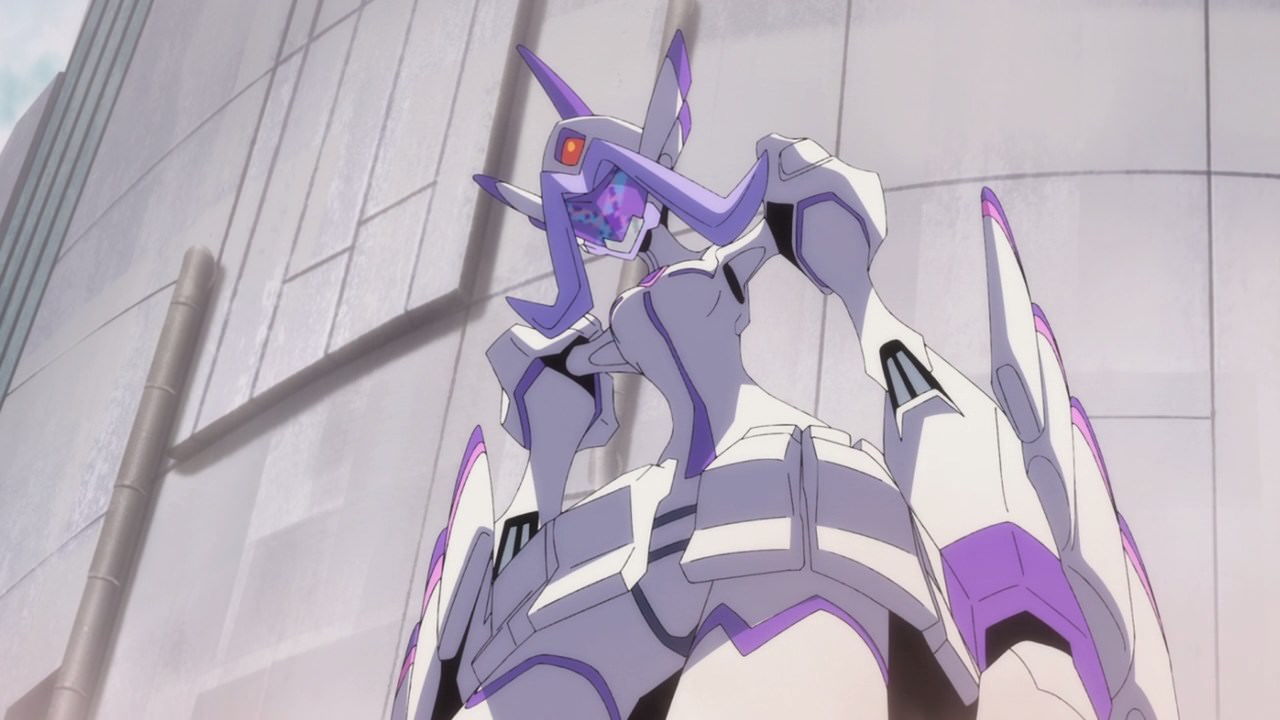 For now, it appears that the Chlorophytum got a problem with one of the parasites. Hmm, I wonder it has something to do with Code:326 “Mitsuru”? 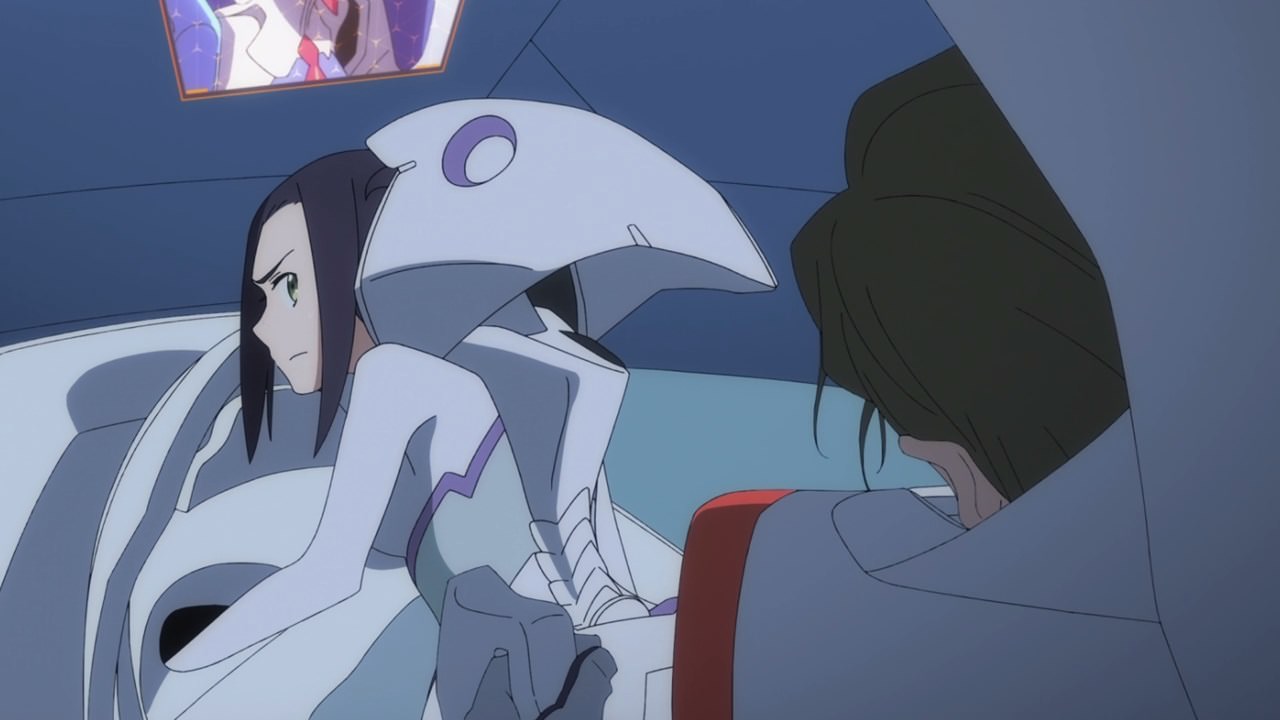 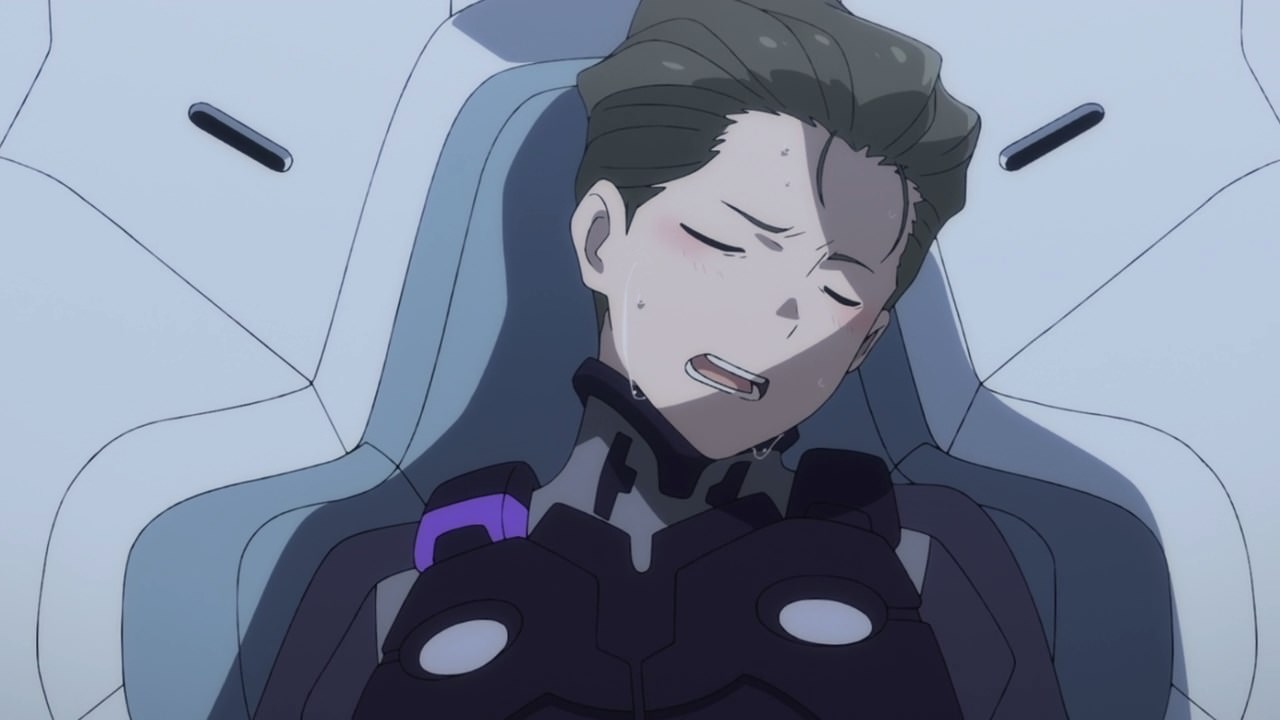 Well it turns out, it is as Code:196 “Ikuno” saw Mitsuru collapsed due to child fever. Gotta say that he sure got a string of misfortunes lately ever since Episode 3 came out.

But you know what, it turned out that Code:326 “Mitsuru” started out as frail boy who admired Code:016 “Hiro” since they were kids. Heck, he even go as far as getting an Elixir injection which it has a 15% chance of survival, and yet Mitsuru survived that too in order to fight alongside Hiro. 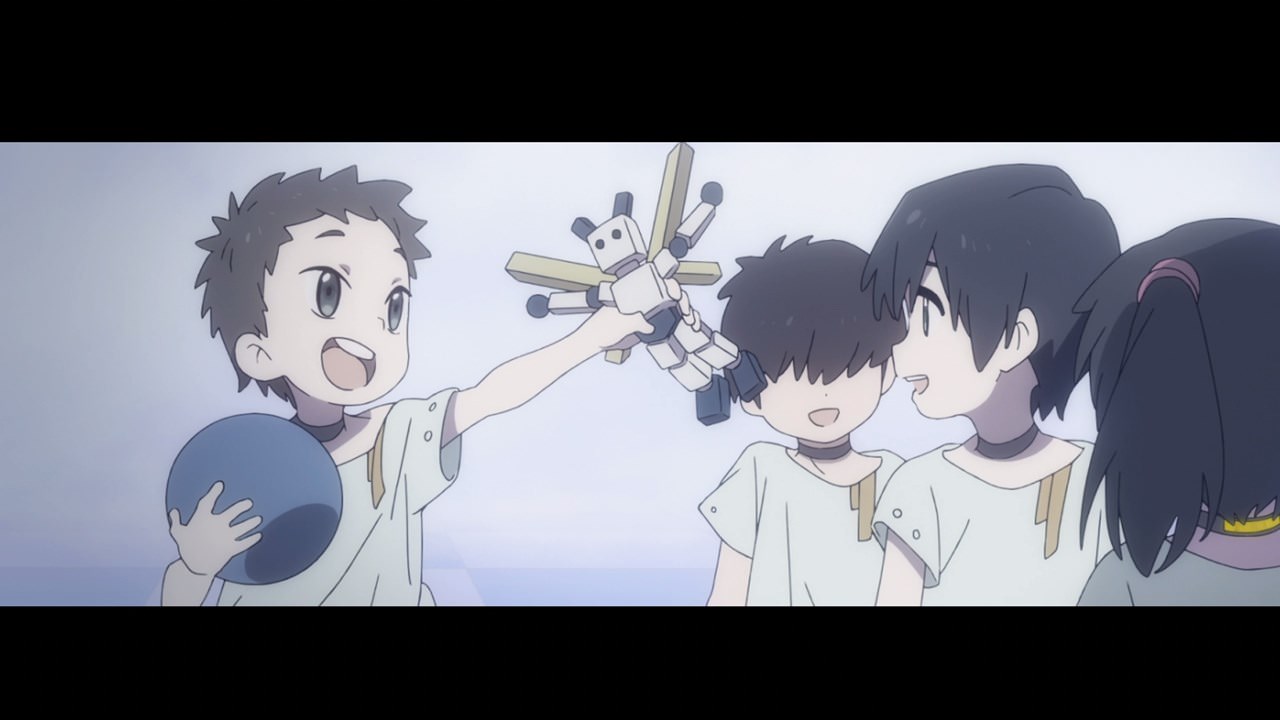 But then again, we all know that Hiro didn’t live up to everyone’s expectations as he turned out to be an inept parasite, much to Mitsuru’s disappointment.

So yeah, Mitsuru hated Hiro’s guts simply because he felt pretty betrayed when Hiro couldn’t pilot a FranXX until Zero-Two came around many years later. 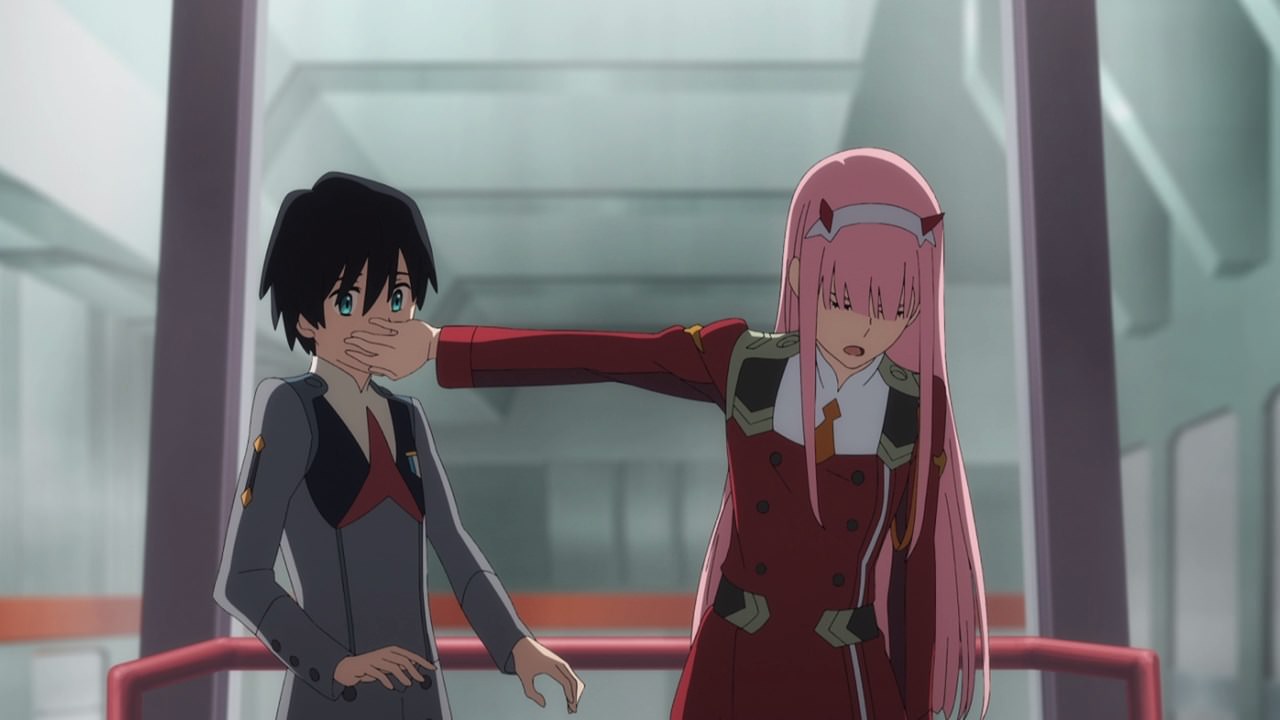 Anyways, let’s go back to the present as Nana gave them some time to talk to their respective partners and if they’re not satisfied, they can switch it out.

Now then, here’s Code:016 “Hiro” as he wants to have a pep talk with Code:002 “Zero-Two”, but it appears that she’s not interested in having a chat with her partner because it’s unnecessary. Seriously, they need to know more about each other, but then again Dr. Franxx’s fears might come true should Hiro dwell deeper into Zero-Two… and not in a sexual way. 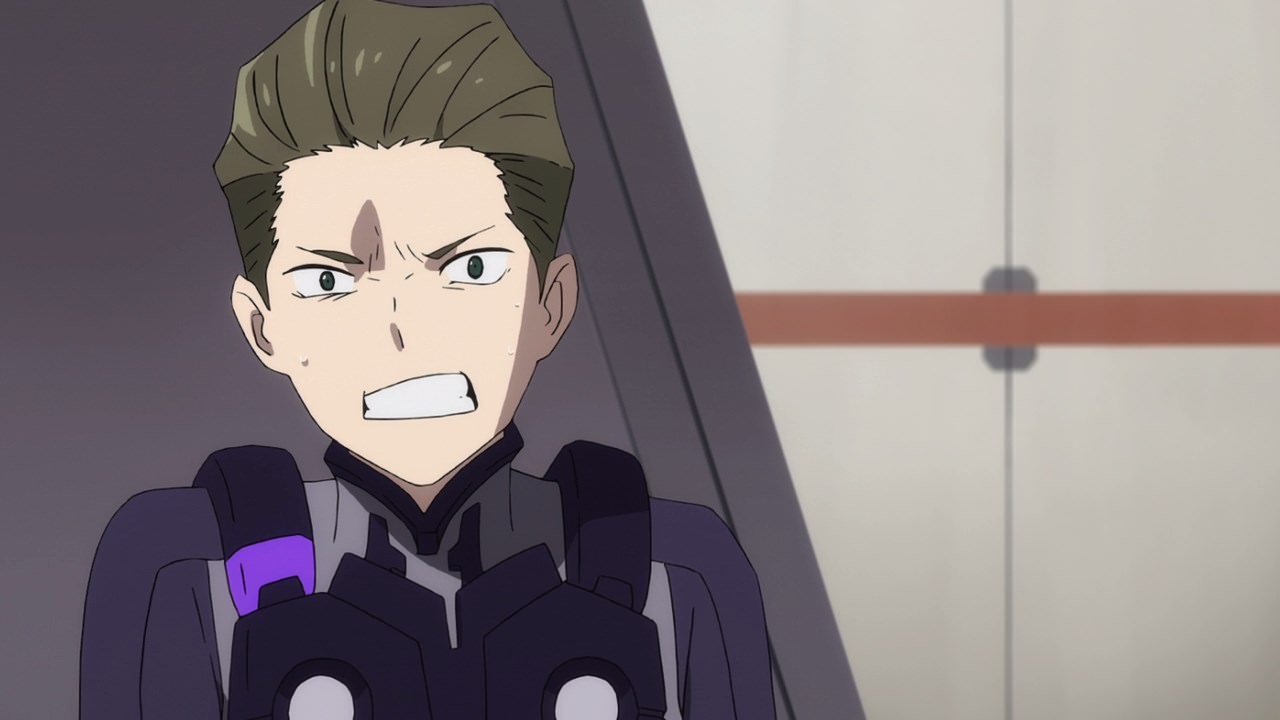 Meanwhile, it appears that Code:326 “Mitsuru” just lash his frustration at Code:196 “Ikuno”, which is fine for her because seeing Mitsuru scowl and complain suits him better than acting aloof. 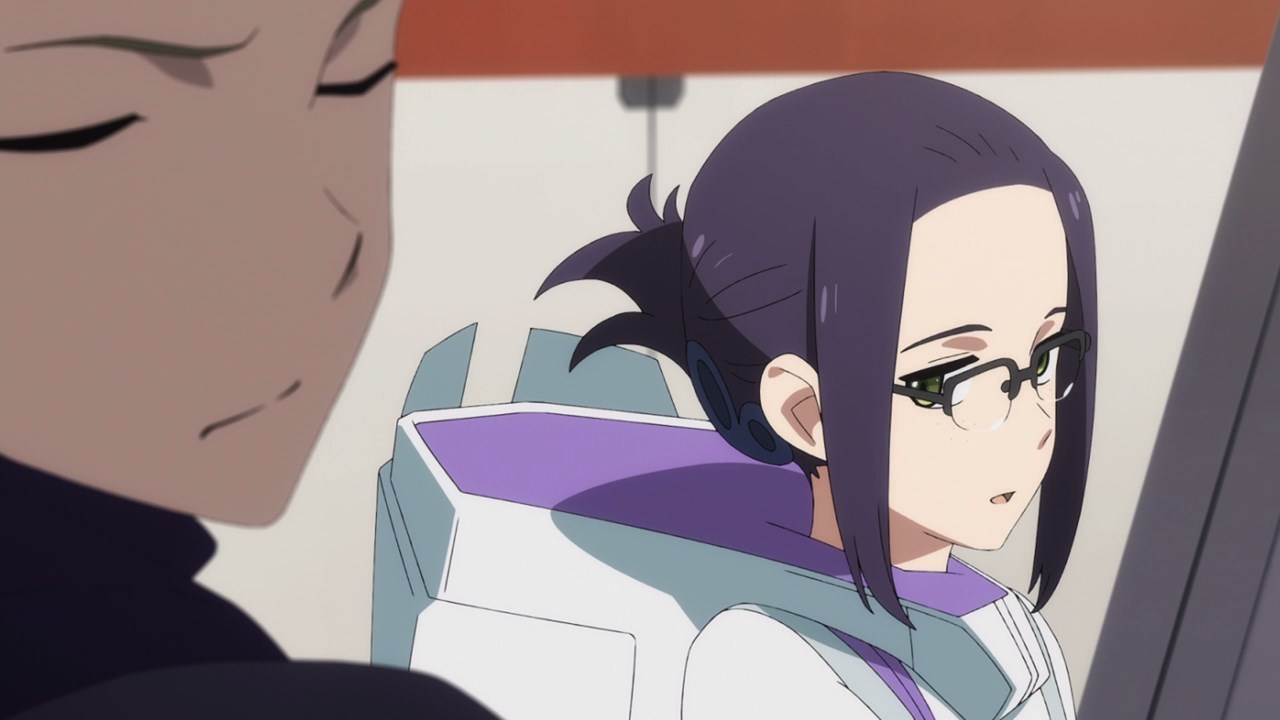 And speaking of Ikuno, it appears that she wants to change her partner instead of sticking with Mitsuru.

Initially, Code:196 “Ikuno” tried to sync with Code:015 “Ichigo”, but it didn’t work because pistil-to-pistil synchronization doesn’t work at all. 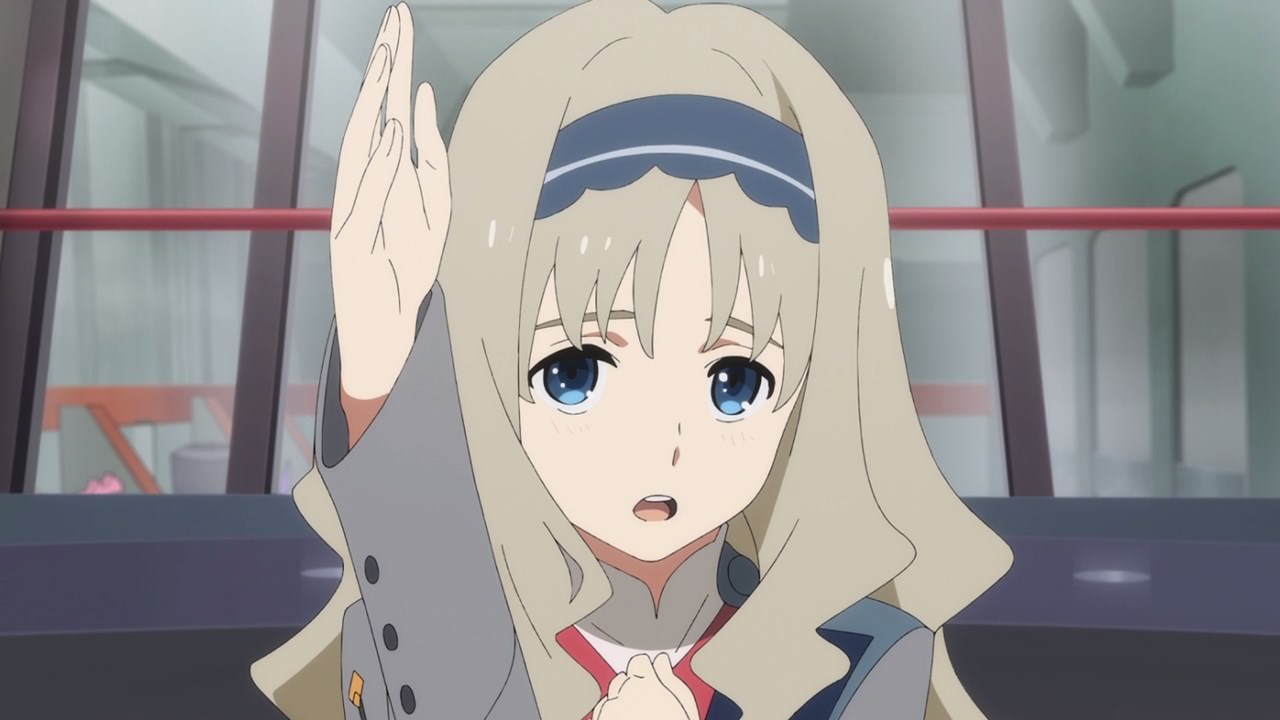 But after much consideration, Code:556 “Kokoro” decides to become Mitsuru’s new partner, much to her previous partner’s despair. 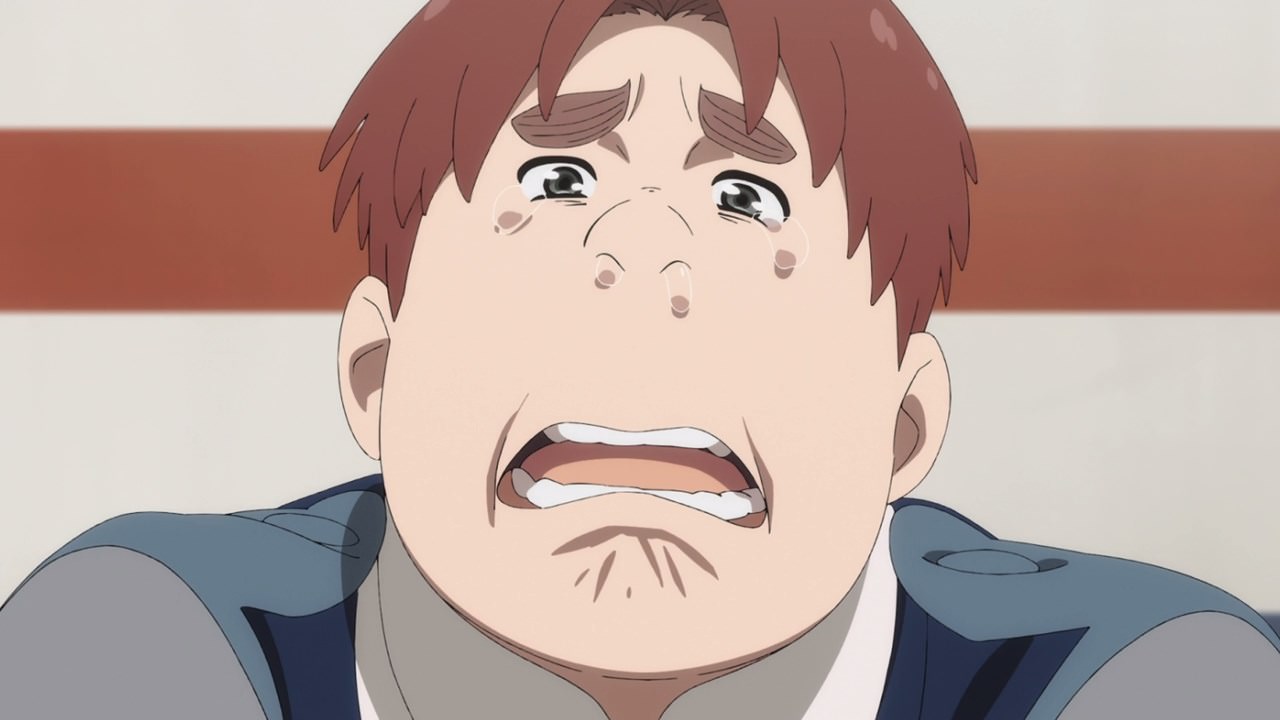 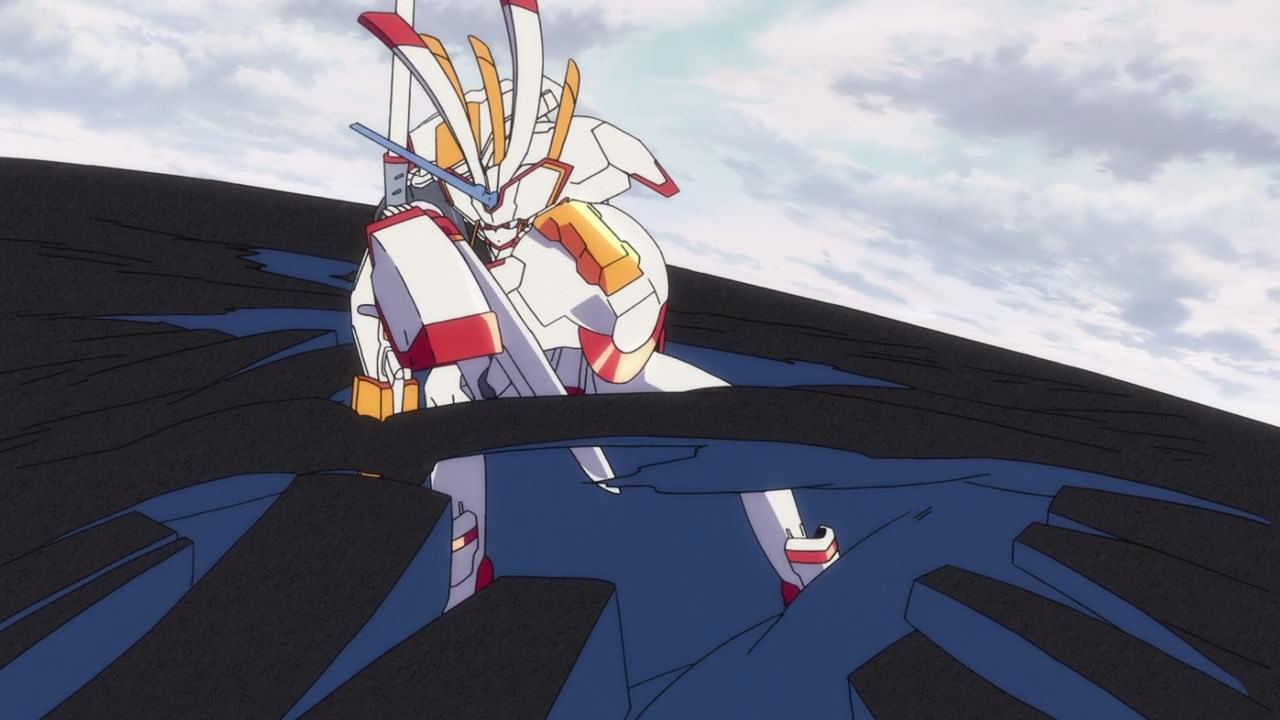 Now then, it’s time for another mission as Plantation 13’s FranXX team are fighting a Gutenberg-class klaxosaur, which Zero-Two is itching for something big. 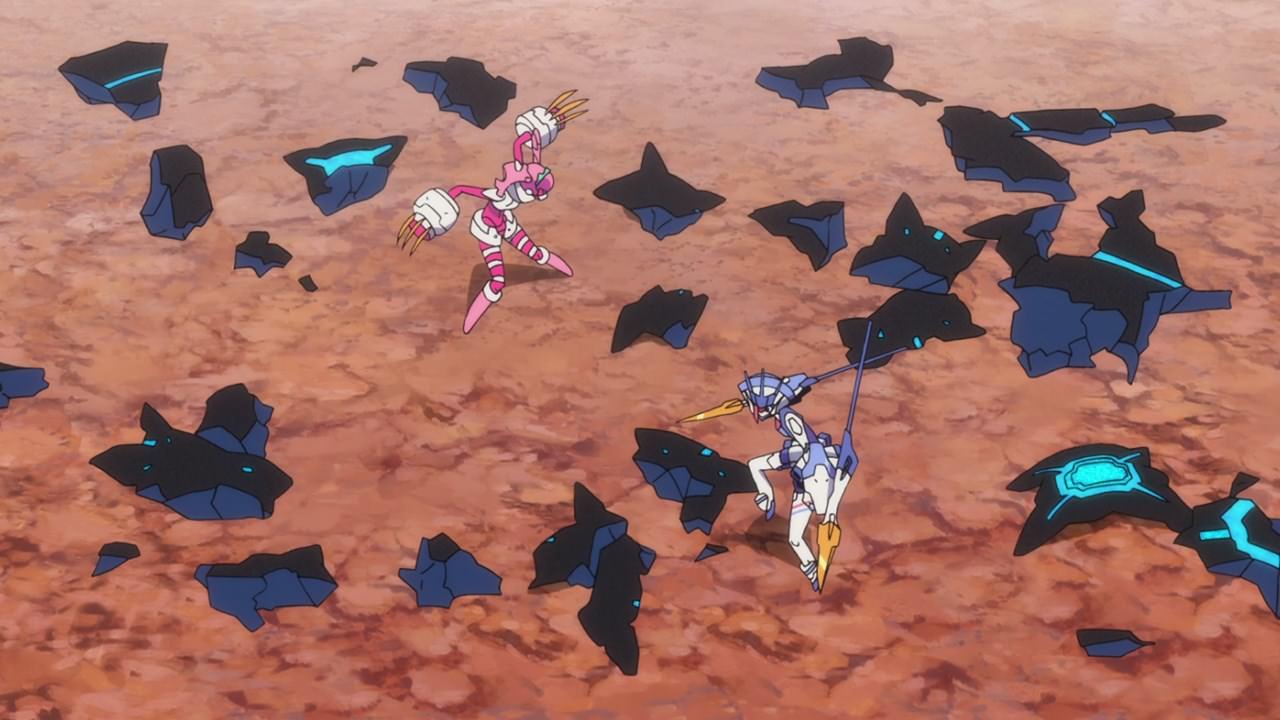 But then again, Zero-Two’s reckless attack against the klaxosaur got worse where the rest will have to deal with smaller Conrad-class ones which came off from the larger Gutenberg-class. 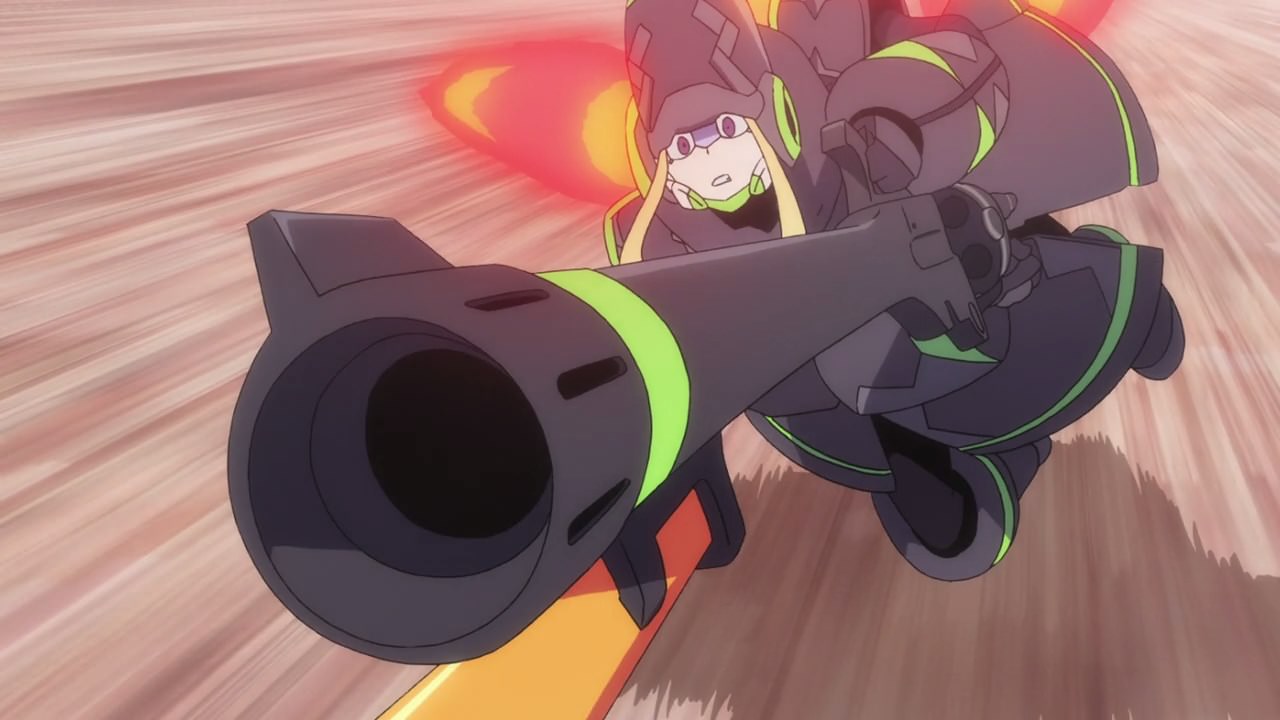 Now let’s focus on Genista as both Code:326 “Mitsuru” and Code:556 “Kokoro” went in to stop the Gutenberg-class klaxosaur by themselves. 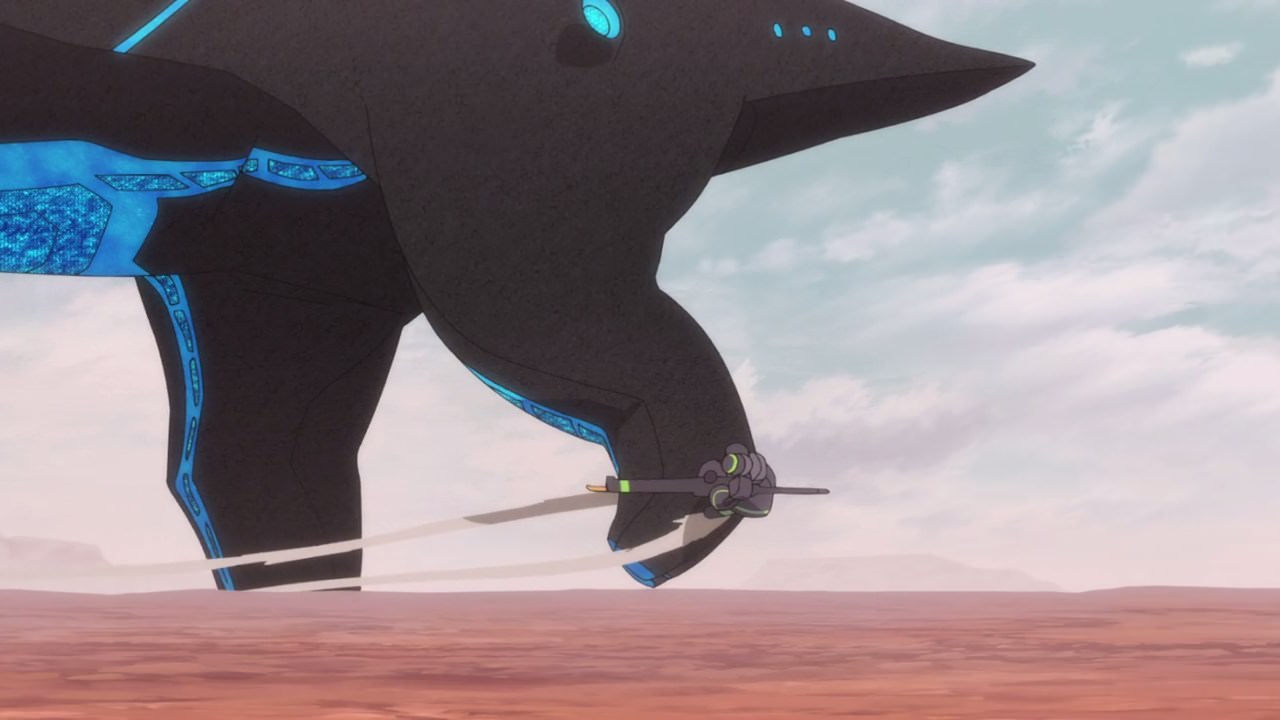 Unfortunately, they got their asses kicked hard by the klaxosaur. Welp, seems that their partnership might be in jeopardy! 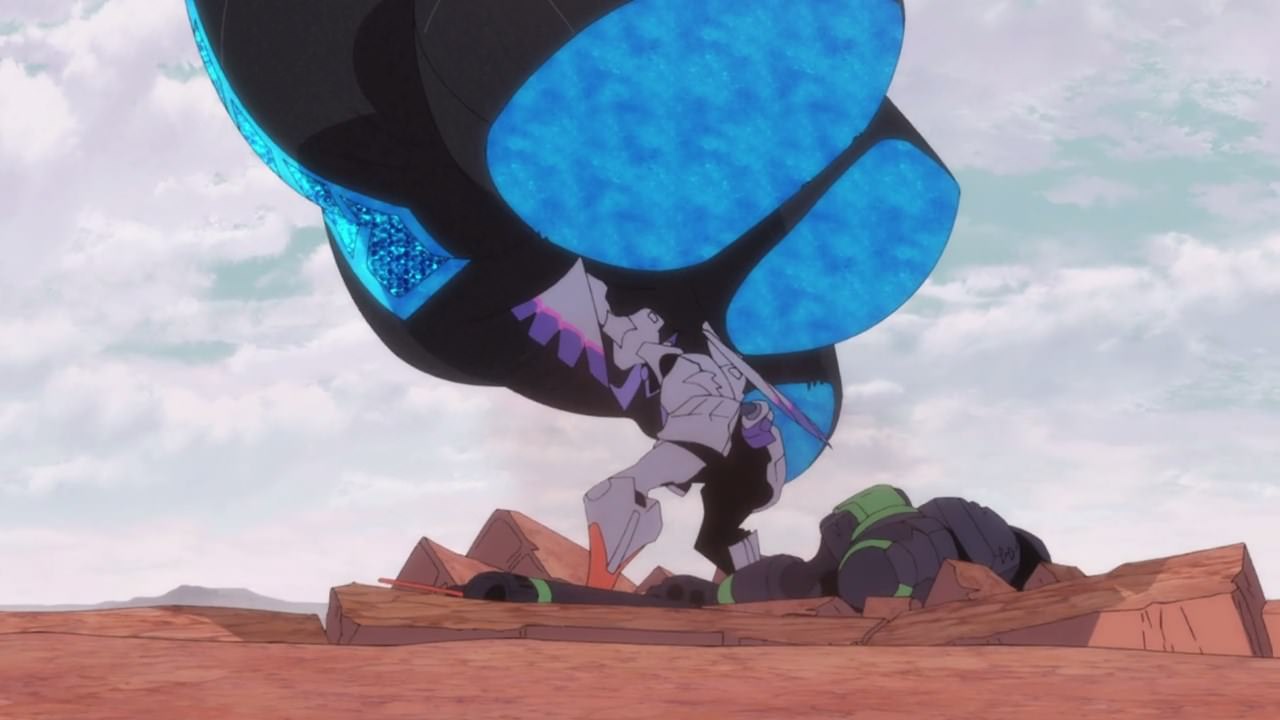 Even worse is that Genista is about to get crushed by the Gutenberg-class, but Chlorophytum stepped in to save both Code:326 “Mitsuru” and Code:556 “Kokoro”, but mostly Kokoro since Code:214 “Futoshi” really cared about her! 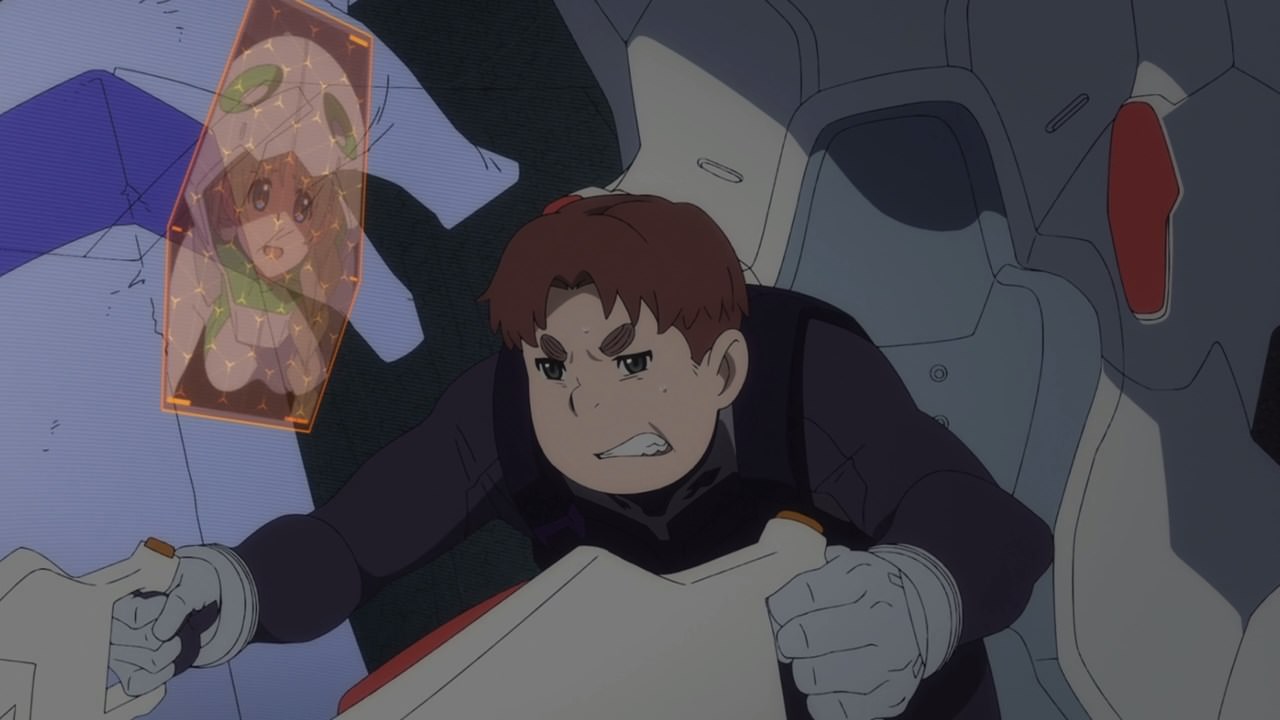 I mean, Futoshi is Kokoro’s original partner so he’s doing his utmost best to let her live. As for Mitsuru, Futoshi didn’t care much about him anyway. 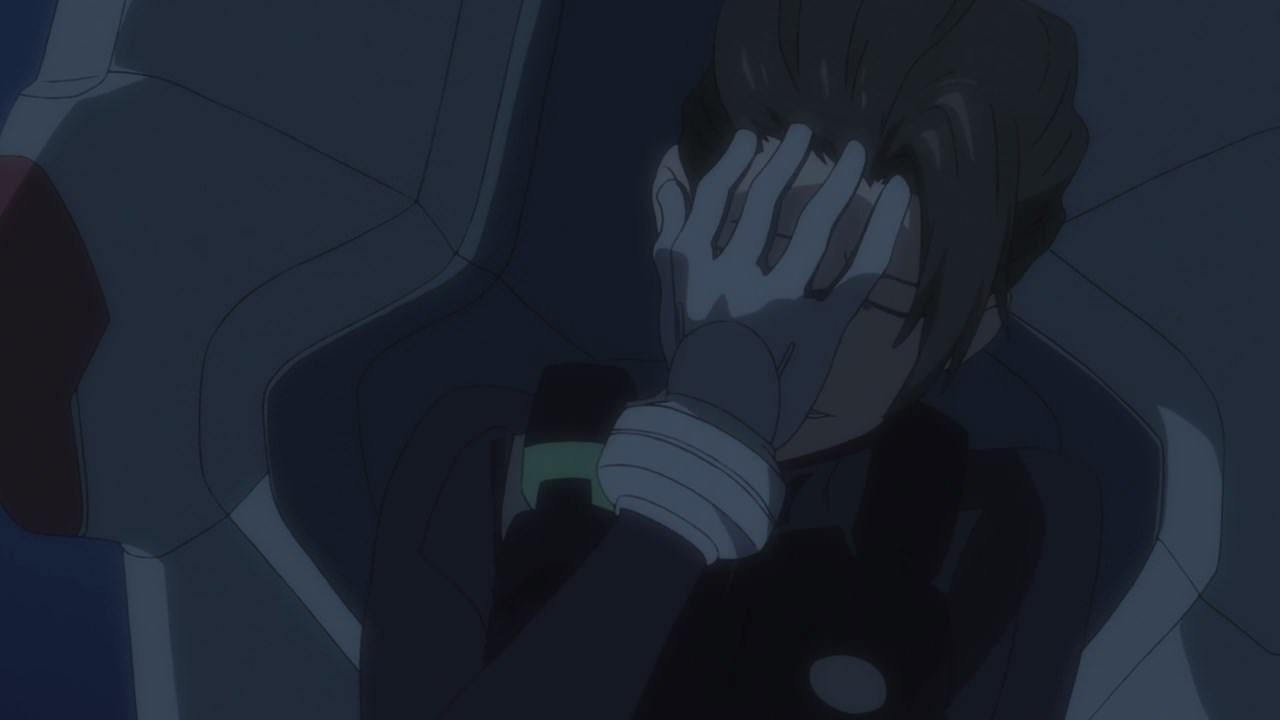 And speaking of Mitsuru, he’s getting that pathetic face after getting his ass kicked hard and putting his partner Kokoro in danger. Dammit Mitsuru, get a grip! 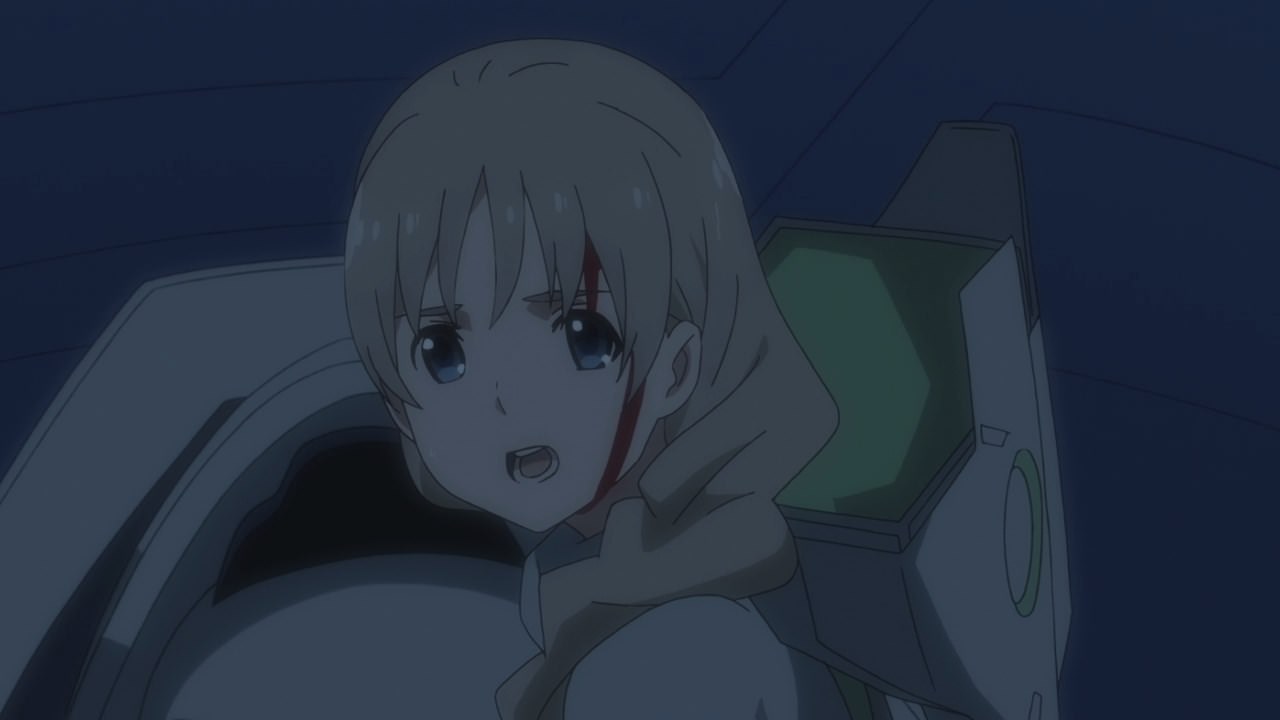 As for Kokoro, she’s fine but a bit shaky and blood spurting from her forehead.

In any case, Kokoro told Mitsuru to rely on others more, especially Hiro in which he still hates him but that depends on whether Mitsuru will forgive Hiro or not. 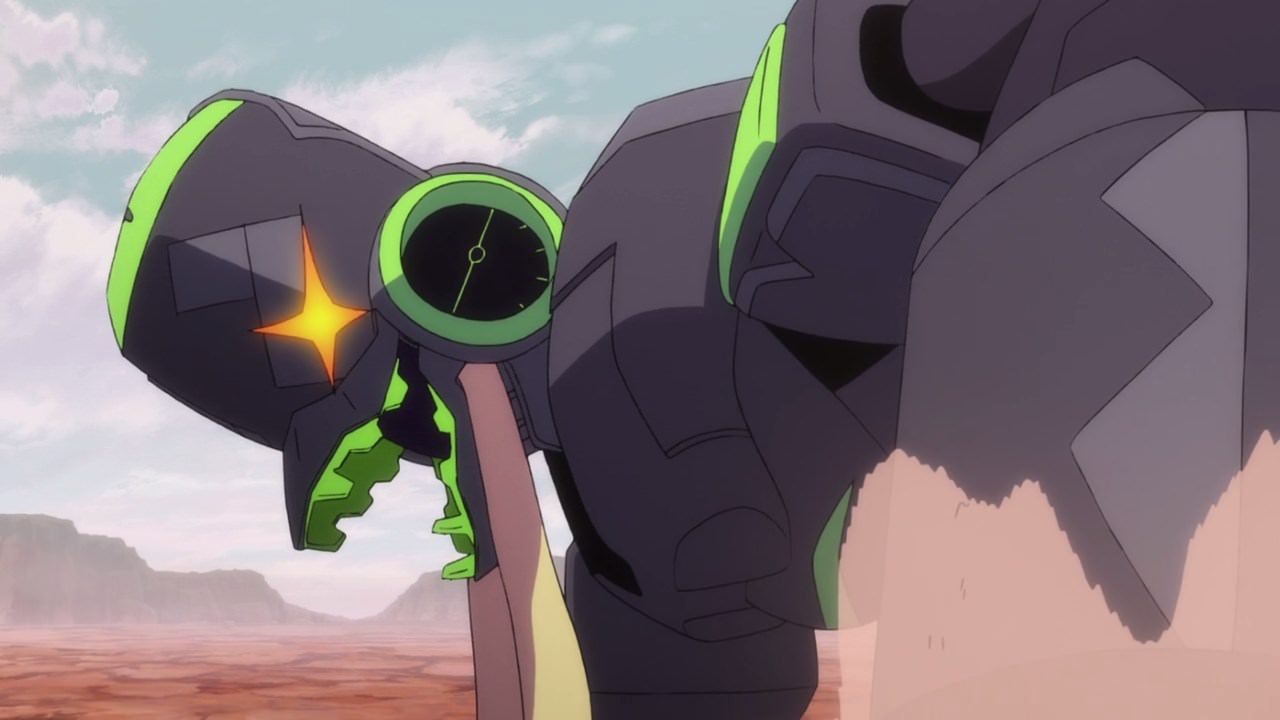 But with that said, Code:556 “Kokoro” decided to sacrifice her life by activating Stampede Mode, which is dangerous and might fatally put Kokoro at risk, something that Code:214 “Futoshi” doesn’t want that to happen! 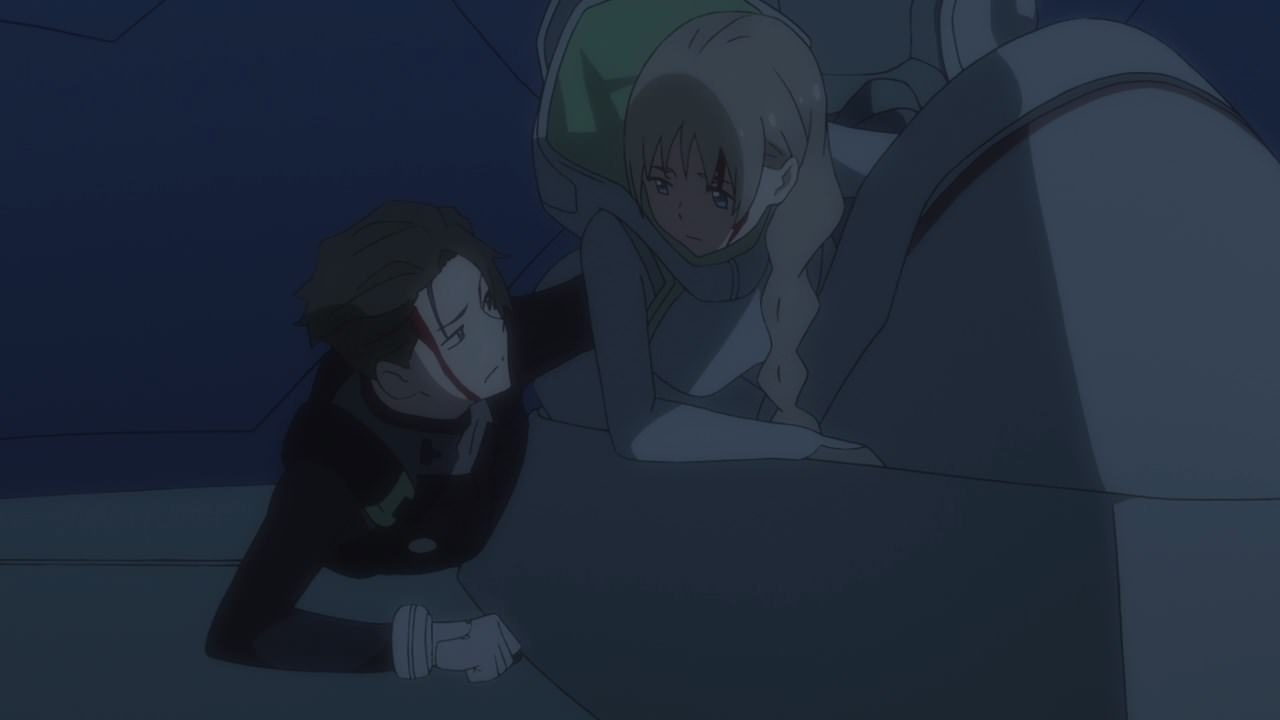 In any case, looks like Mitsuru will have to get a hold of himself and try to get back in the game with Kokoro. 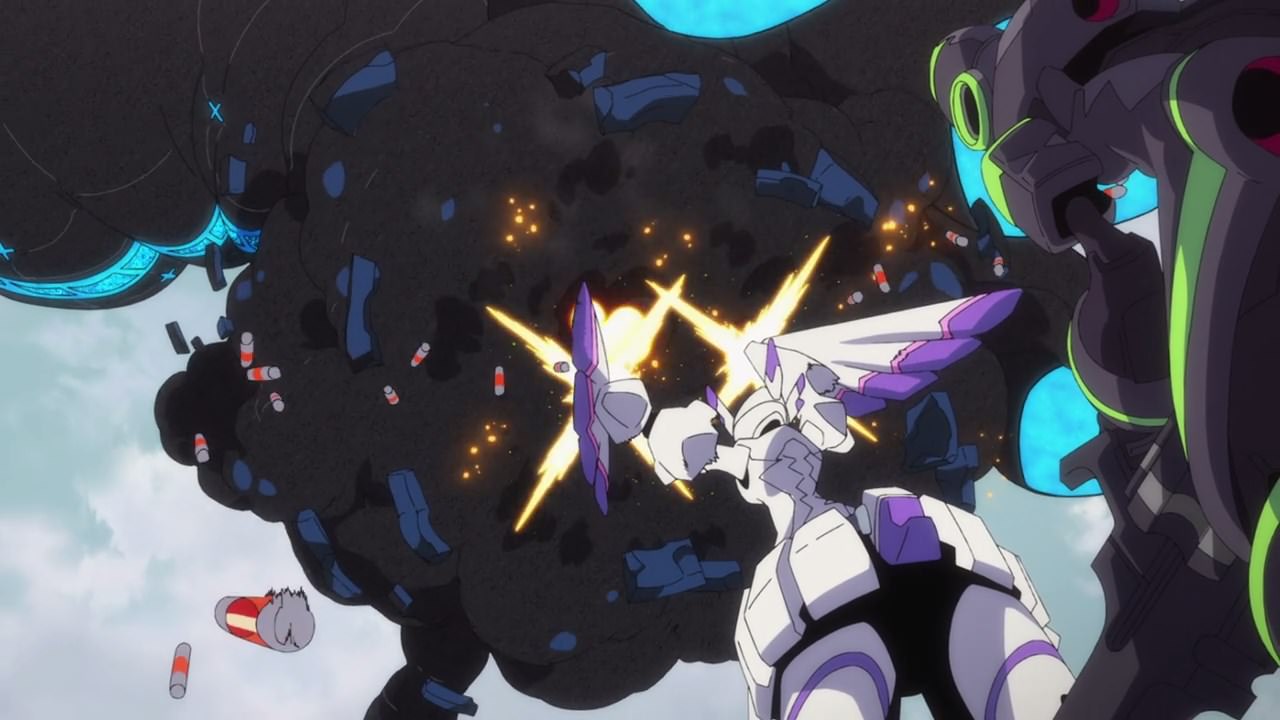 Now then, Genista got back up which is perfect since Chlorophytum spent a lot of time holding this Gutenberg-class. 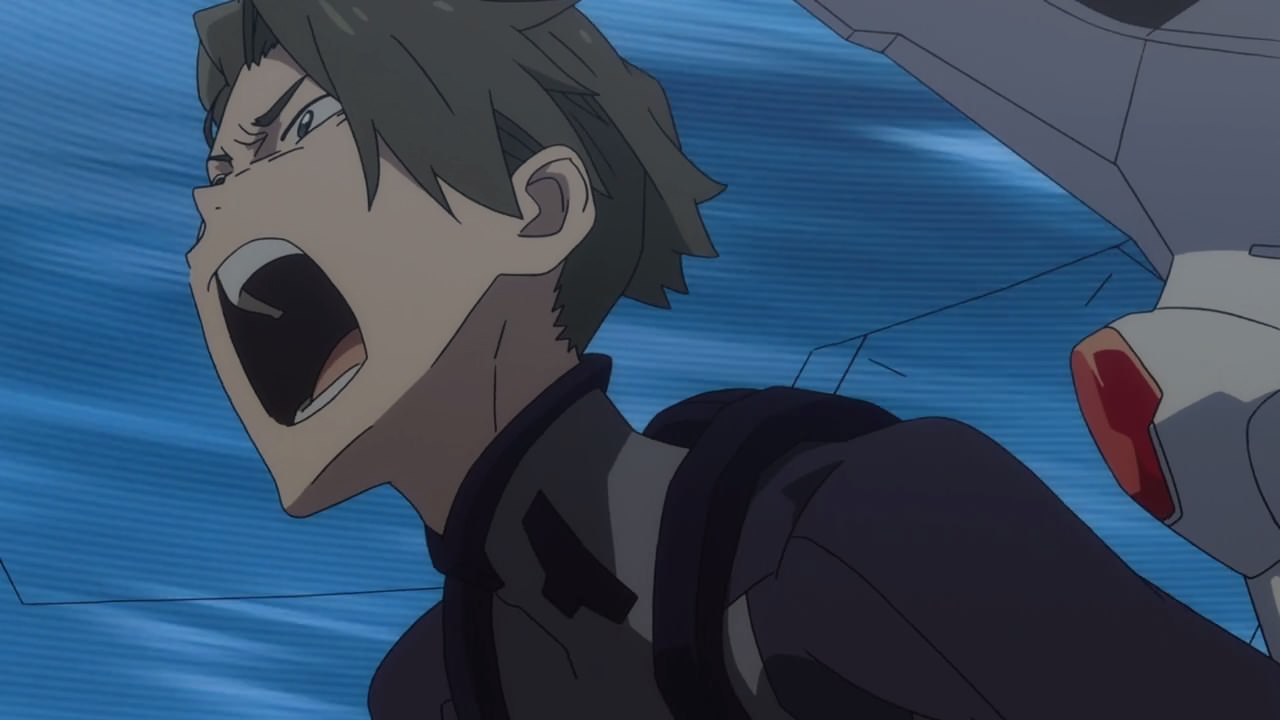 And now, here’s Code:326 “Mitsuru” as he pushed Genista to its limits. 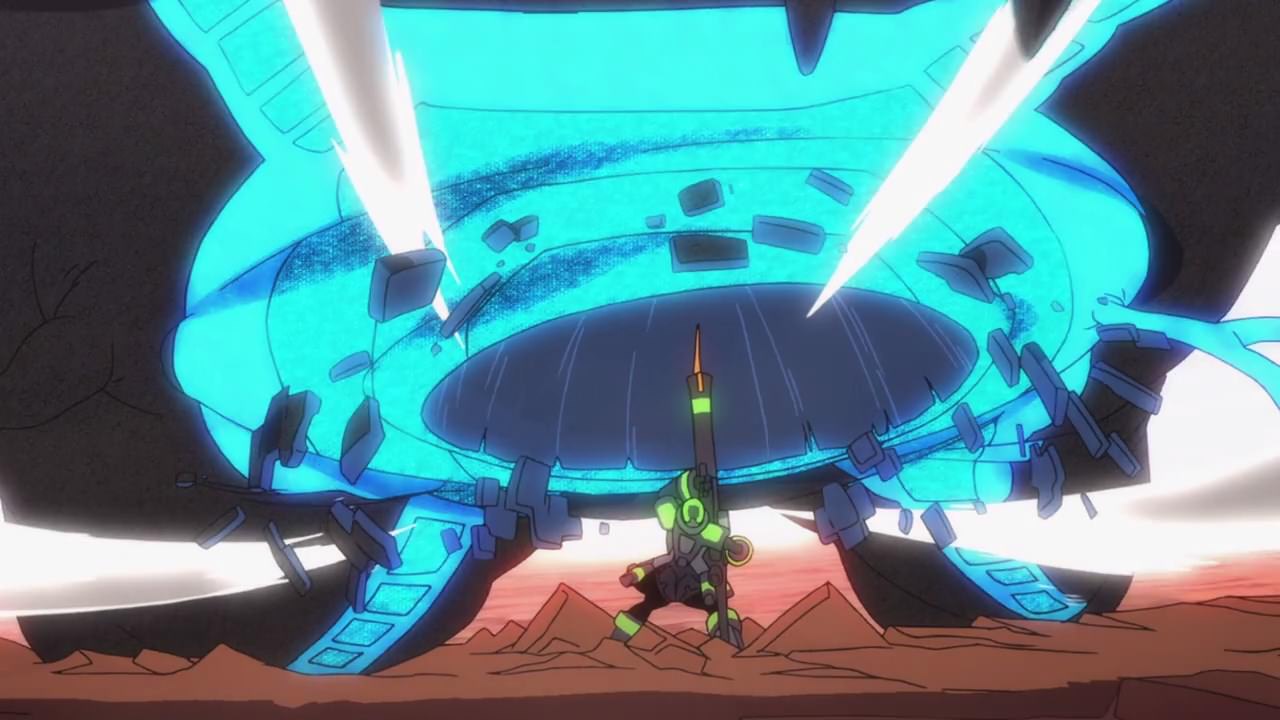 Eventually, he and Code:556 “Kokoro” went closer to the Gutenberg-class’s belly and put some lead towards its skin until the core is exposed. 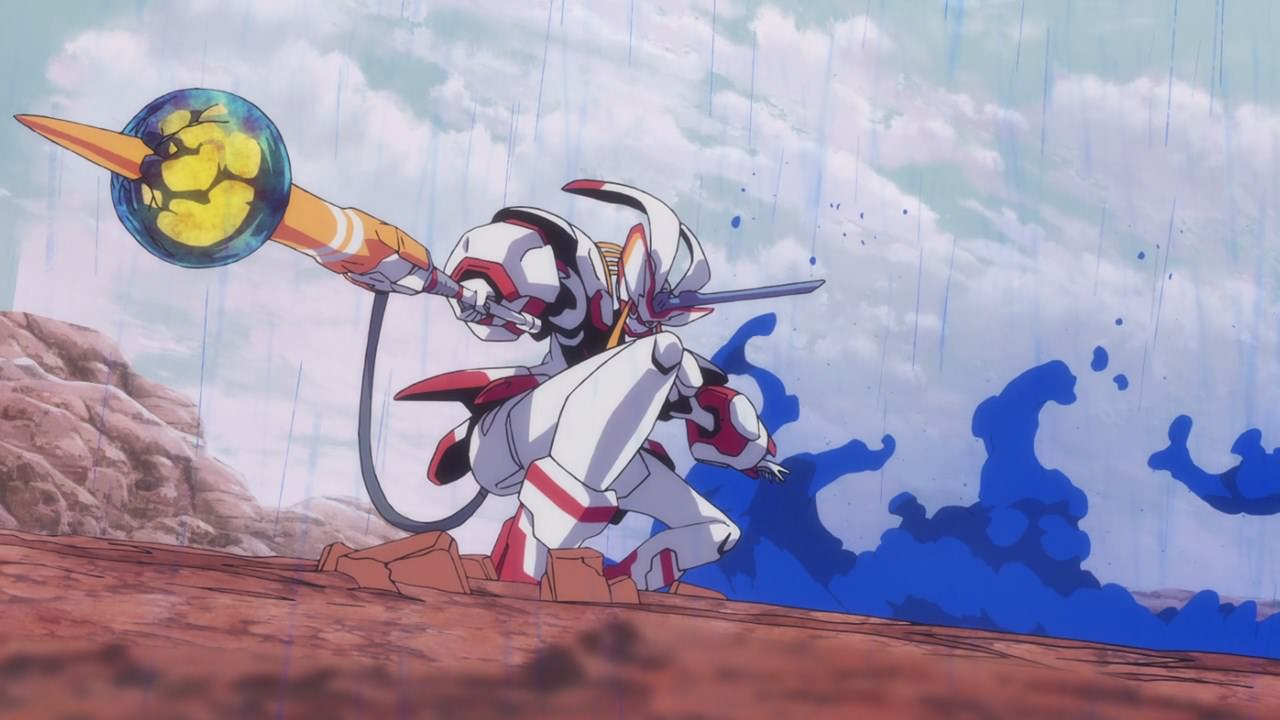 But with that said, the battle is over as the Strelizia destroyed the klaxosaur core and the plantation is safe. Of course, it’s not yet over for the FranXX team… 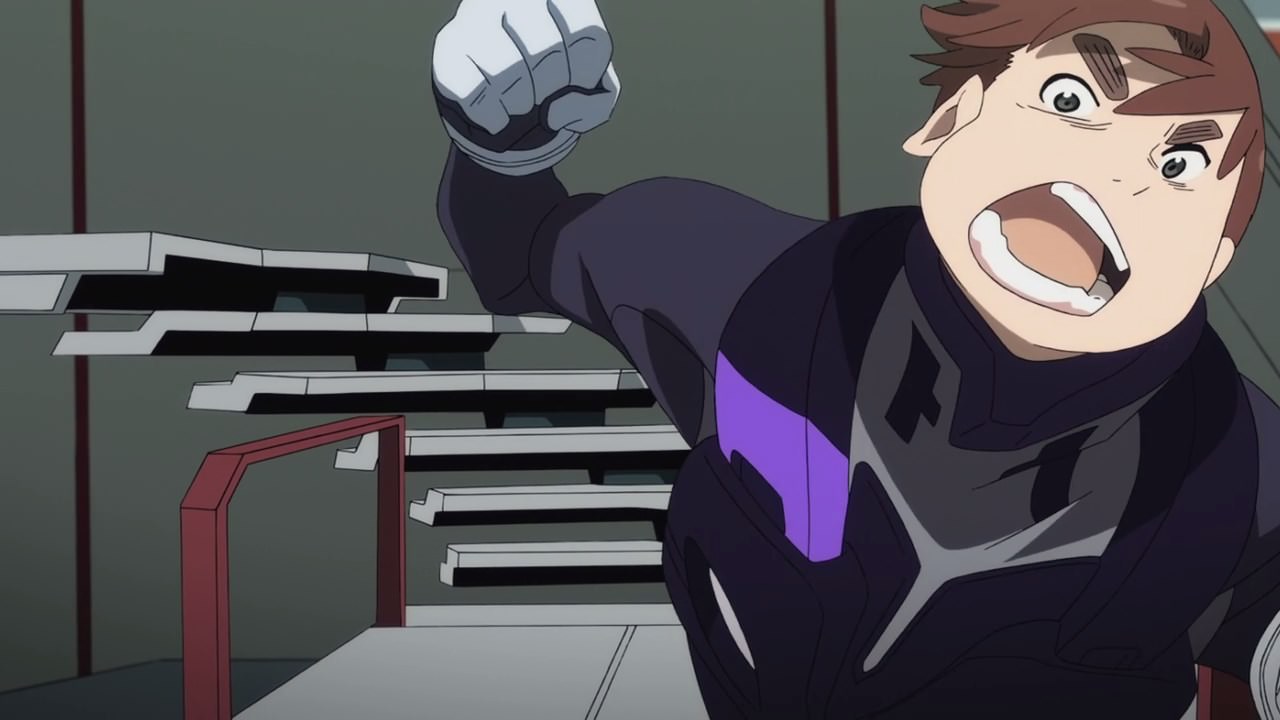 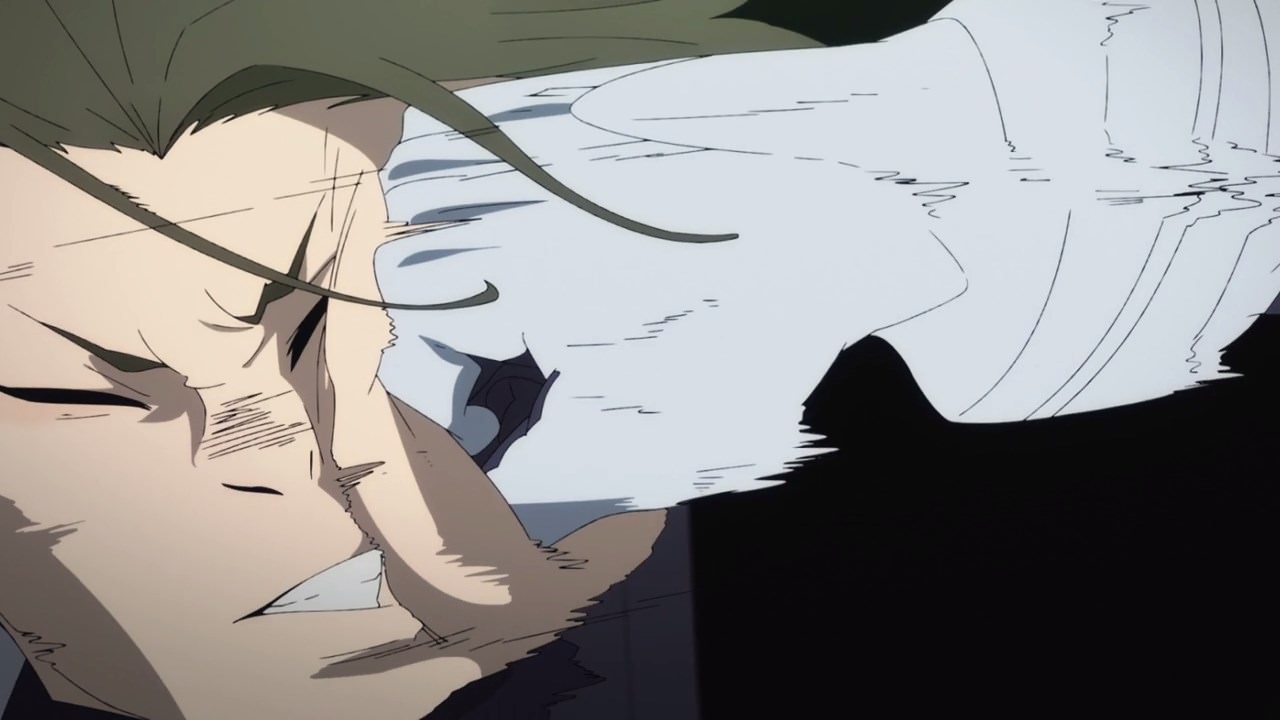 In fact, Code:214 “Futoshi” got very angry towards Code:326 “Mitsuru” that Futoshi punched him in the face for putting Code:556 “Kokoro” at risk.

C’mon, you’ll get mad when your friend got mistreated by someone else, especially when a man hurts a woman! 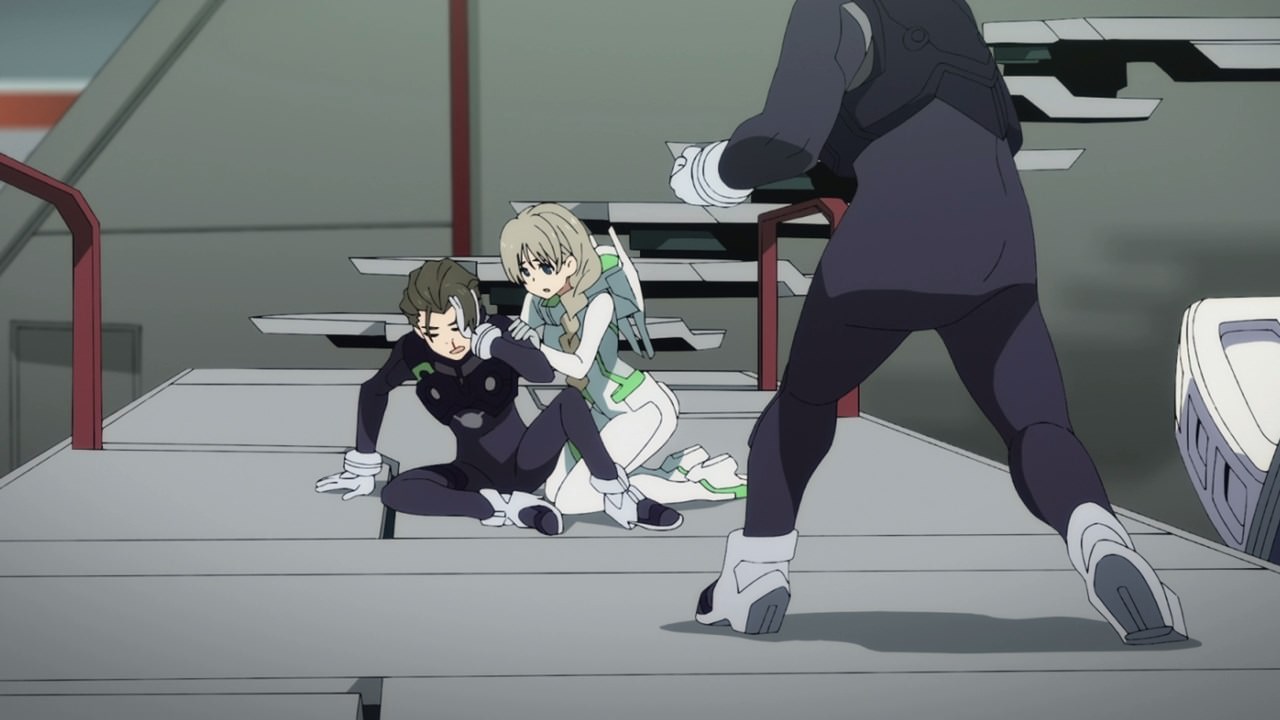 Still, Kokoro is safe and Mitsuru assured to Futoshi that he’ll protect her no matter what. Of course, will this partner change be permanent? Well, it might stick to it since Nana suggested the swap in the first place. 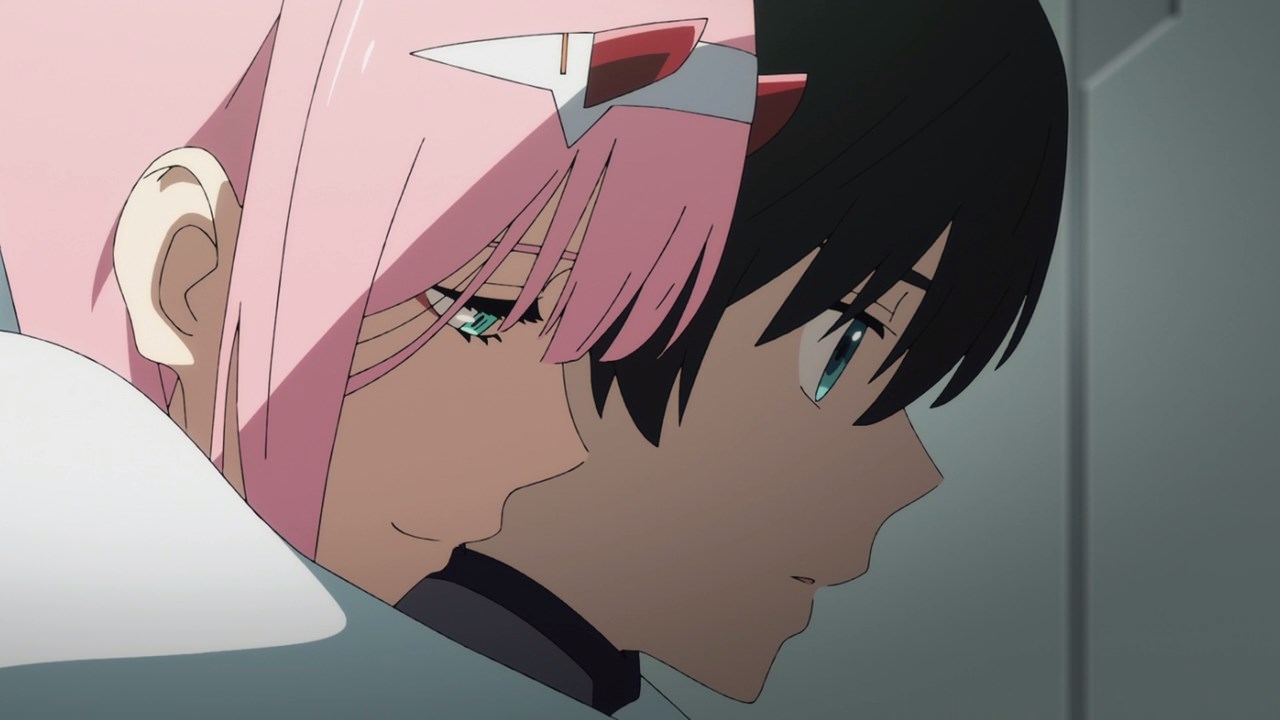 And lastly, here’s Code:002 “Zero-Two” as she tells Code:016 “Hiro” that they’ll stay together until death. Then again, we don’t know if they’ll remain partners until the end of this series.

But that’s about it for this week’s episode as it’s interesting to see Code:326 “Mitsuru” and why he sees Hiro with much contempt. But do I still hate him? Well, yeah since he acted so high and mighty back in Episode 3 when he piloted the Strelizia and almost died after Zero-Two is done playing with him. But you know what, I felt pity towards Mitsuru in the end because even though he felt betrayed easily just because Hiro can’t pilot a FranXX at that time, Mitsuru should continue to believe in others despite not being perfect and such.

On the other hand, I’m curious to see Code:196 “Ikuno” since she wants to be Ichigo’s new partner during the partner swap. Is Ikuno have any sort of feelings towards Ichigo? We’ll find that out next time as we’re reaching closer to the second half of Darling in the FranXX. See ya on the next episode!

3 Responses to Darling in the FranXX Episode #11