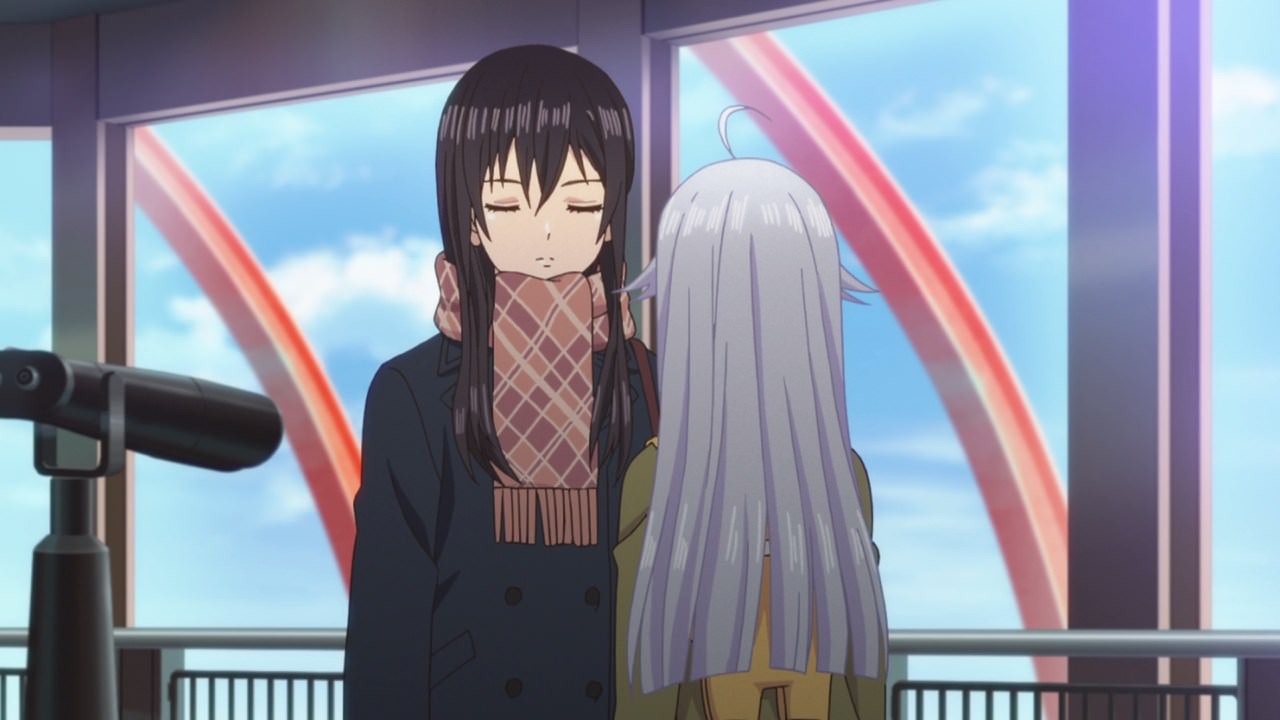 Well, this is the final episode as Mei Aihara is about to accept Sara Tachibana’s confession. But will it be successful though? We’ll find that out later… 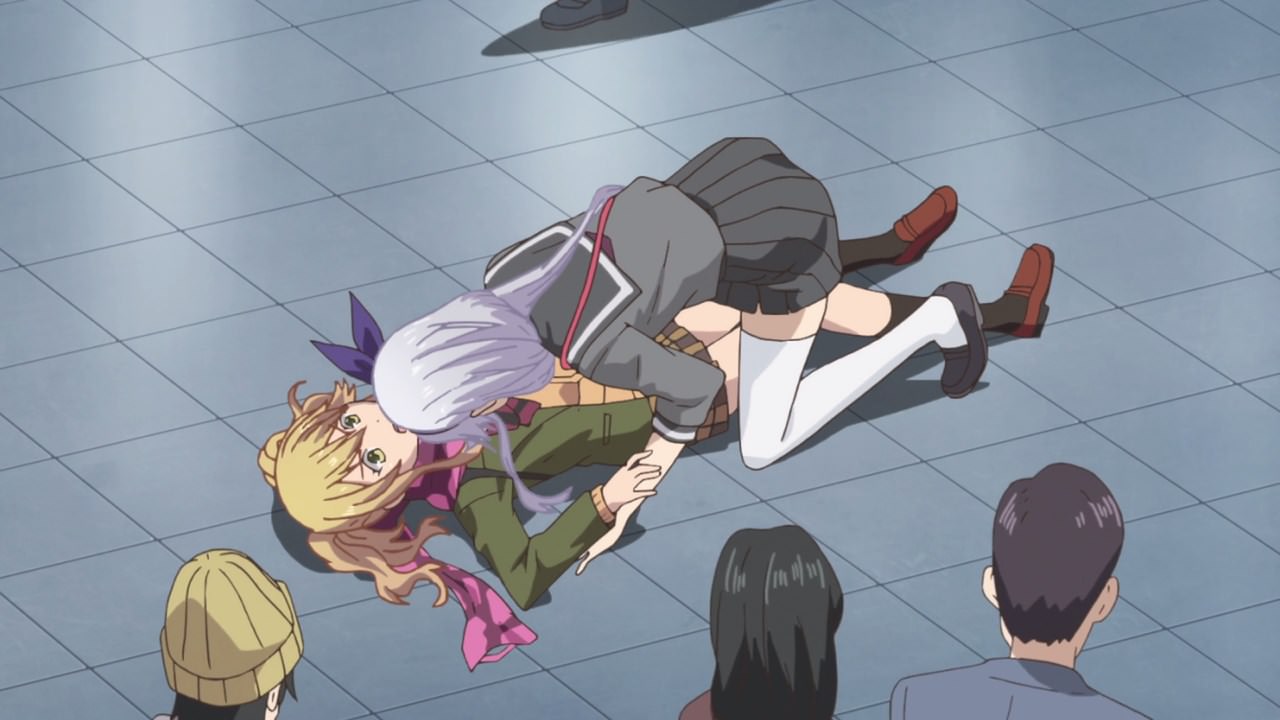 Meanwhile, it appears that Yuzu still wants to see Mei, but Nina refused to let her go. Um girls, don’t do this in public! 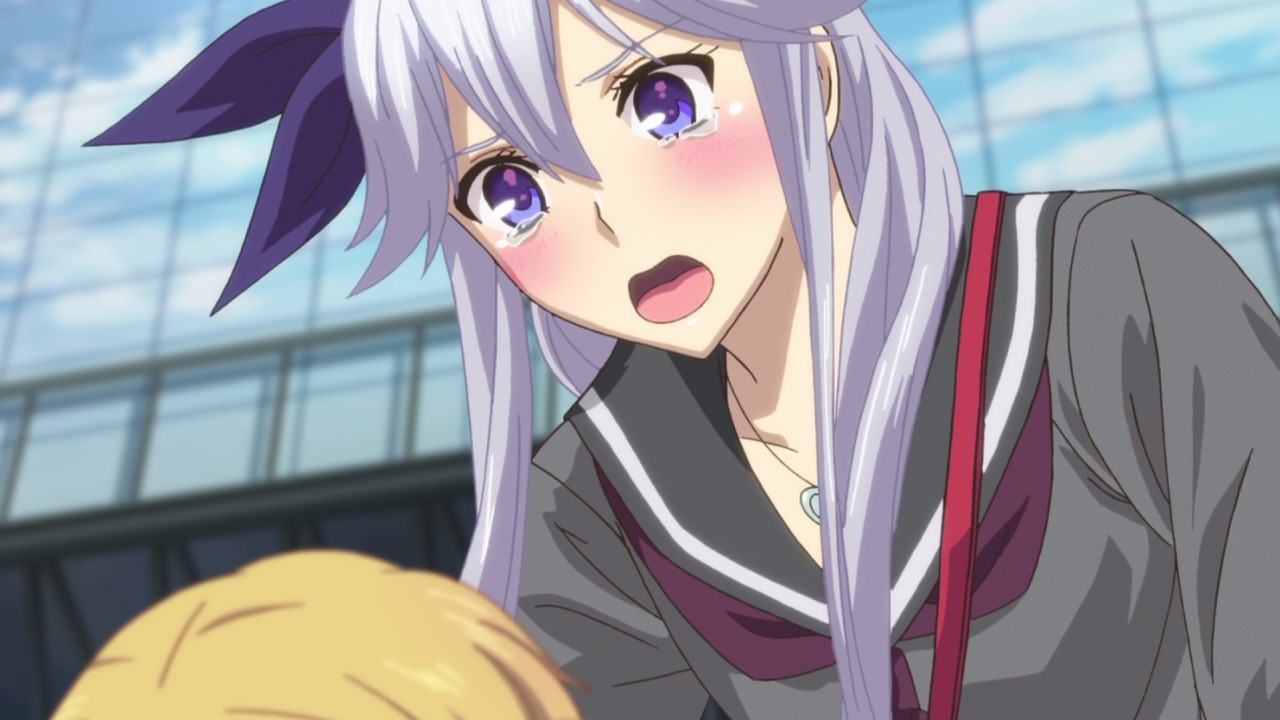 Anyways, Nina told Yuzu not to interfere because her sister Sara wants to get her own happiness instead of supporting someone else.

Well Nina, I know that you’re doing it for your sister’s sake but Sara is supporting Yuzu’s happiness too. 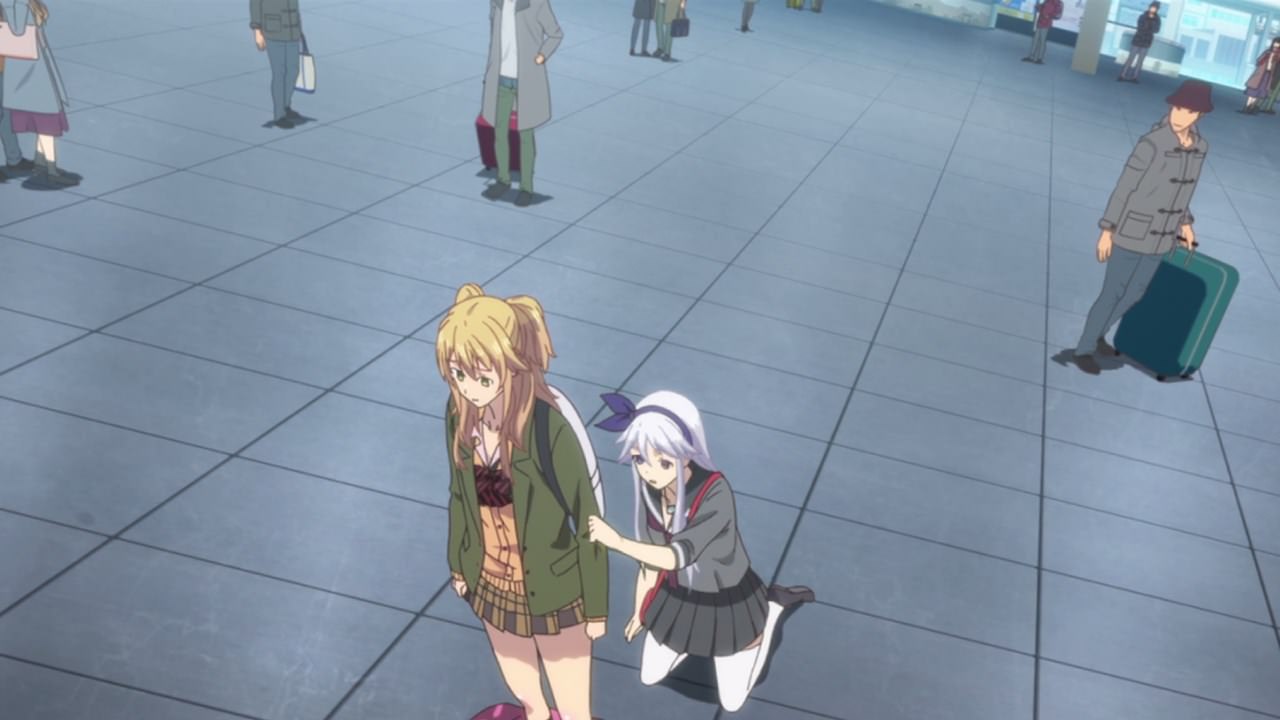 And speaking of Yuzu Aihara, she still want to see Mei as she got a call from Sara Tachibana. Sorry Nina, it seems that your sister wants to support Yuzu after all. 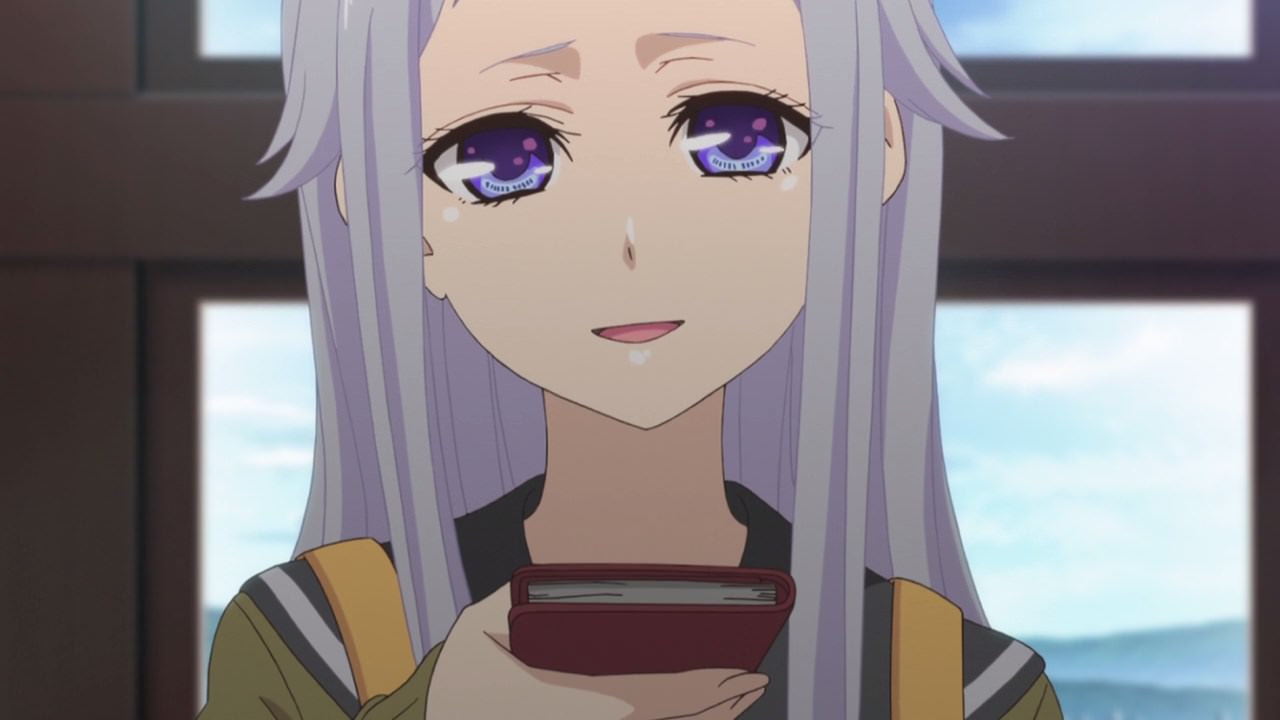 But here’s Sara as she gave something to Yuzu. It turns out that it’s actually her wallet. Silly Yuzu, you sure misplace your important things! 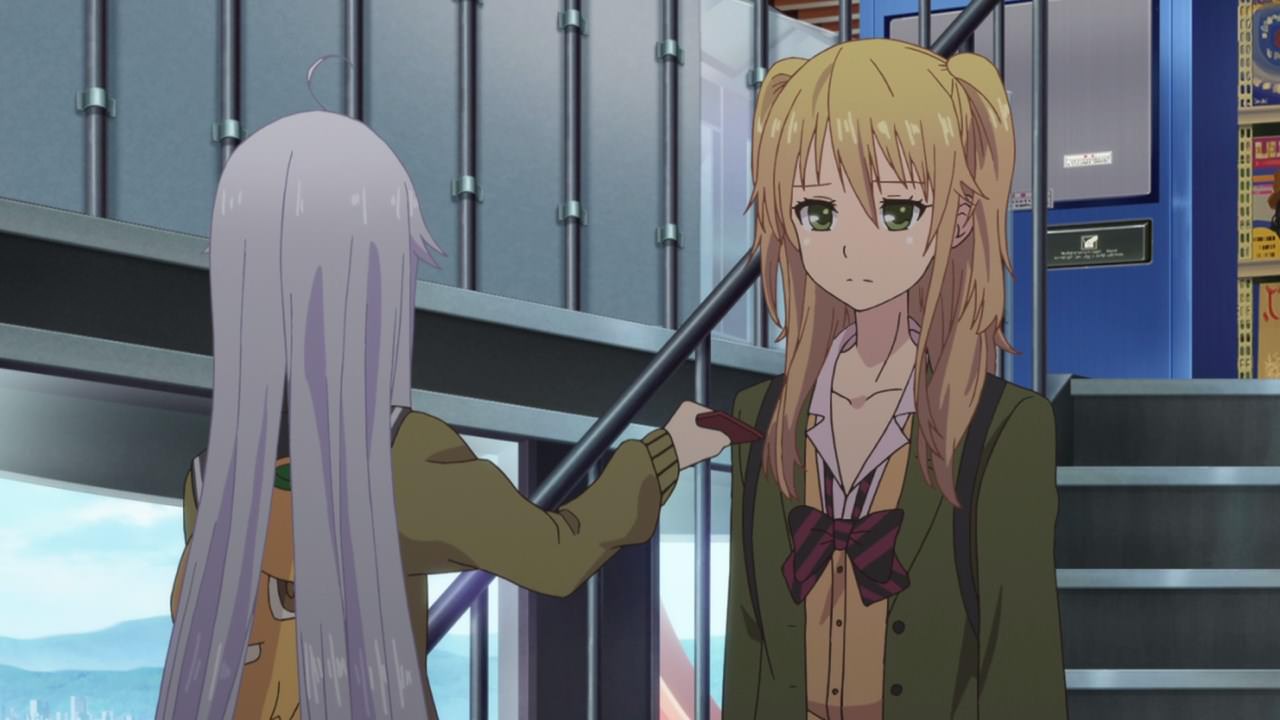 Anyways, Sara Tachibana told Yuzu Aihara that Mei went to the shrine by herself. Oh yeah, it turns out that Mei is not waiting for Sara, yet Sara asked Yuzu if she still wants to reach her step-sister.

Of course, Yuzu will do whatever it takes to get Mei back, so Sara Tachibana gave her blessing to Yuzu and told her to find Mei because she’s a girl who hides her broken heart. 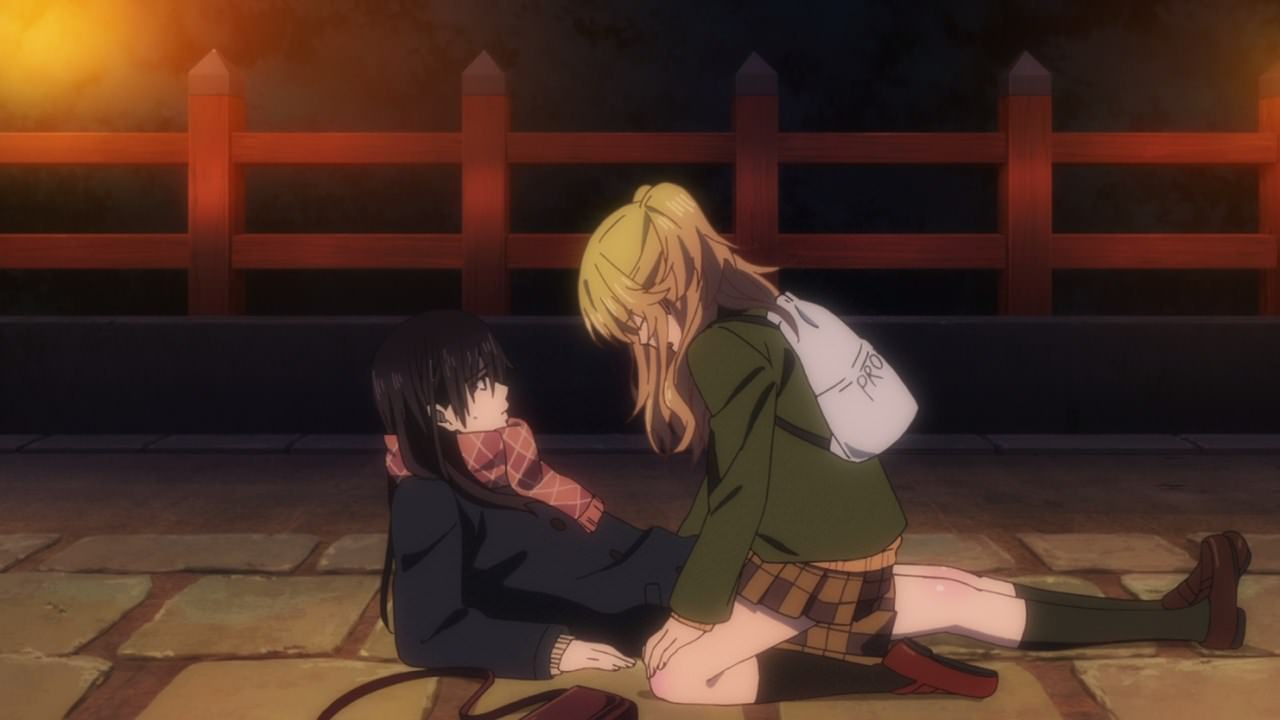 Anyways, Yuzu managed to find Mei at the shrine as she wants to make amends with her estranged step-sister.

C’mon, she might not be perfect, but Yuzu truly loves Mei very much! 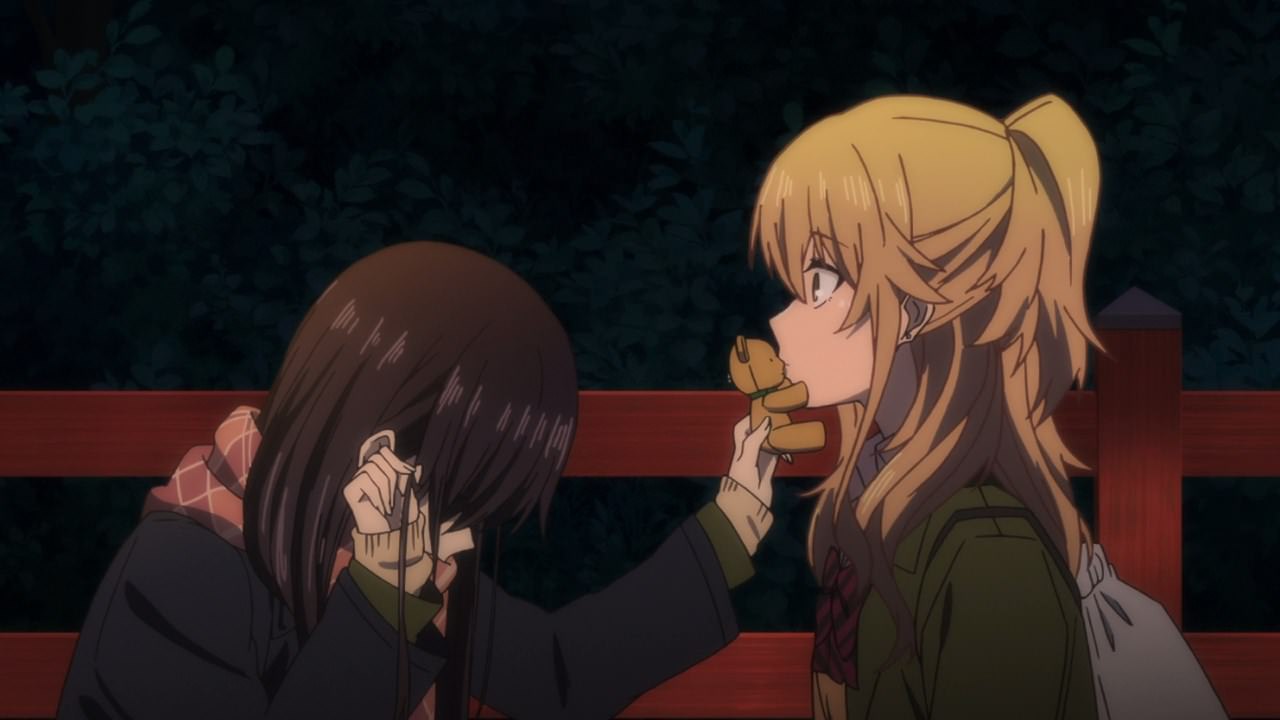 Then again, Mei is such a tease when she put her tiny teddy bear onto Yuzu’s lips. Damn, that’s a nasty block, where’s the damn kiss? 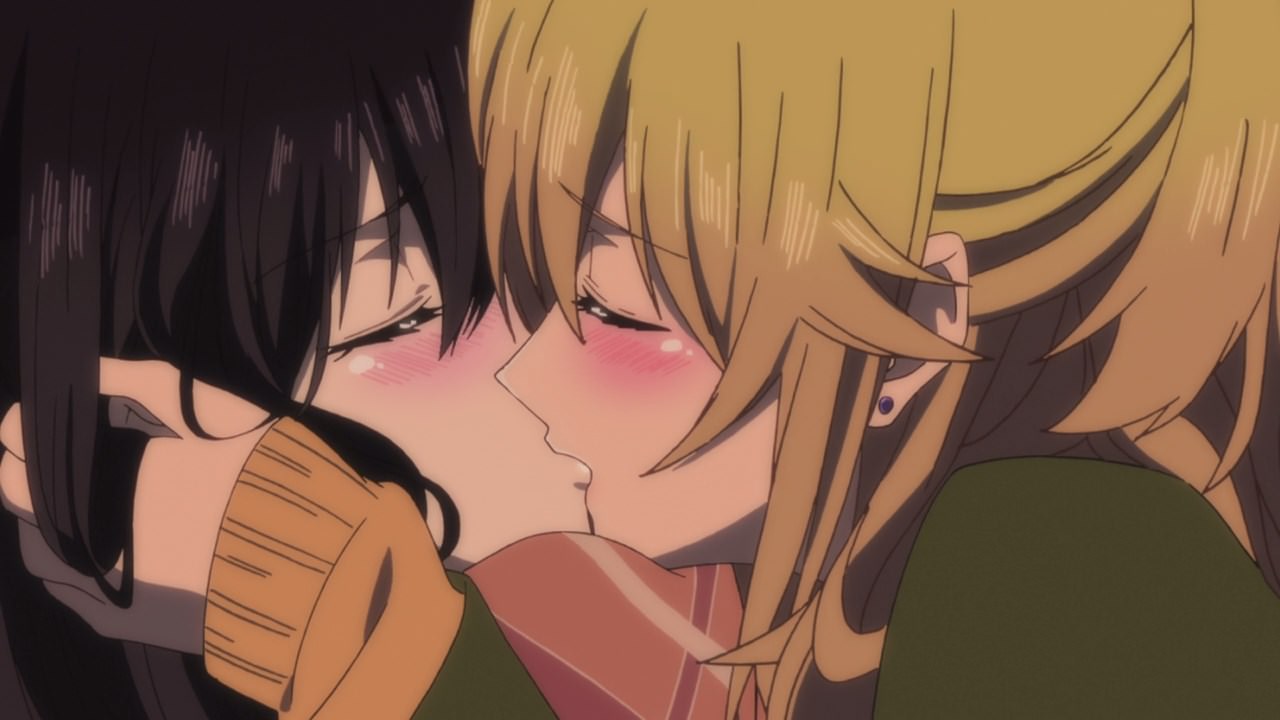 Well, here it is and it’s much better than getting cock-blocked! That’s what I call a genuine kiss between two girls!

In any case, both Mei and Yuzu have finally reconciled and sure enough, they might become lovers at this point… in secret though. 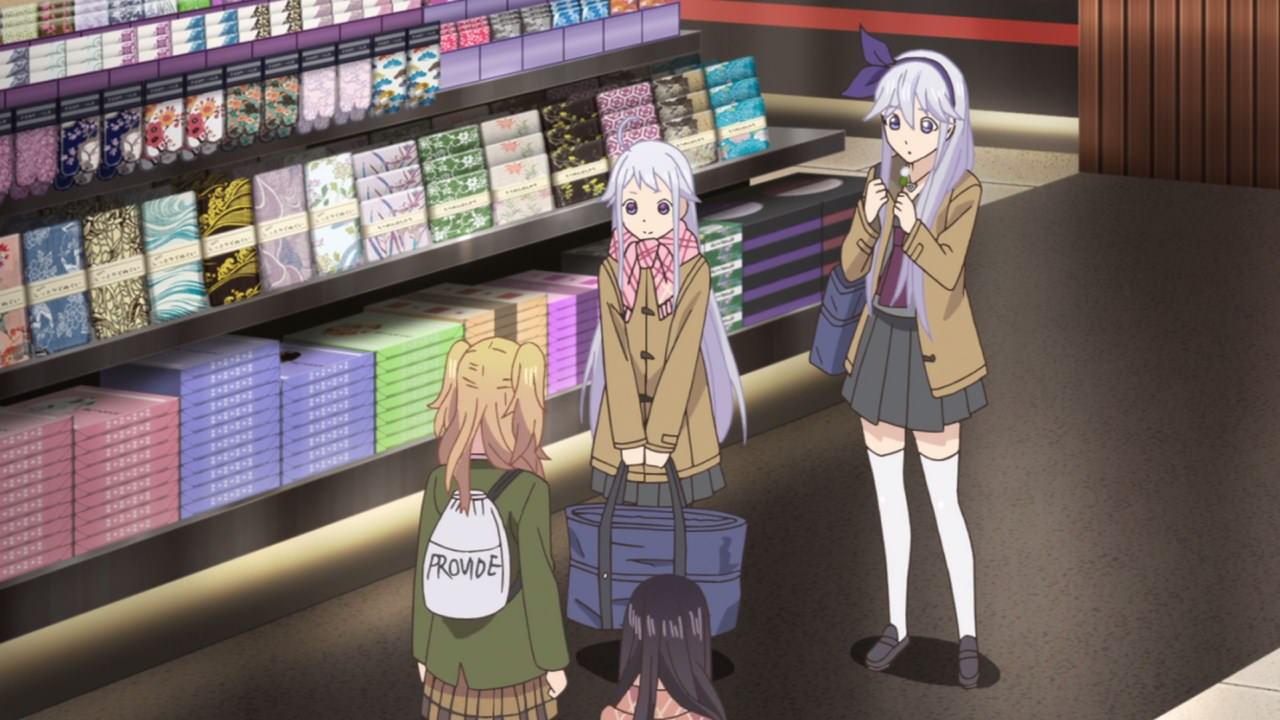 And now, they went back to the Tachibana sisters after some kiss and make up. See, they’re frie- I mean lovers now!

Of course, Sara wants to talk to Mei in private as she wants to tell something important… 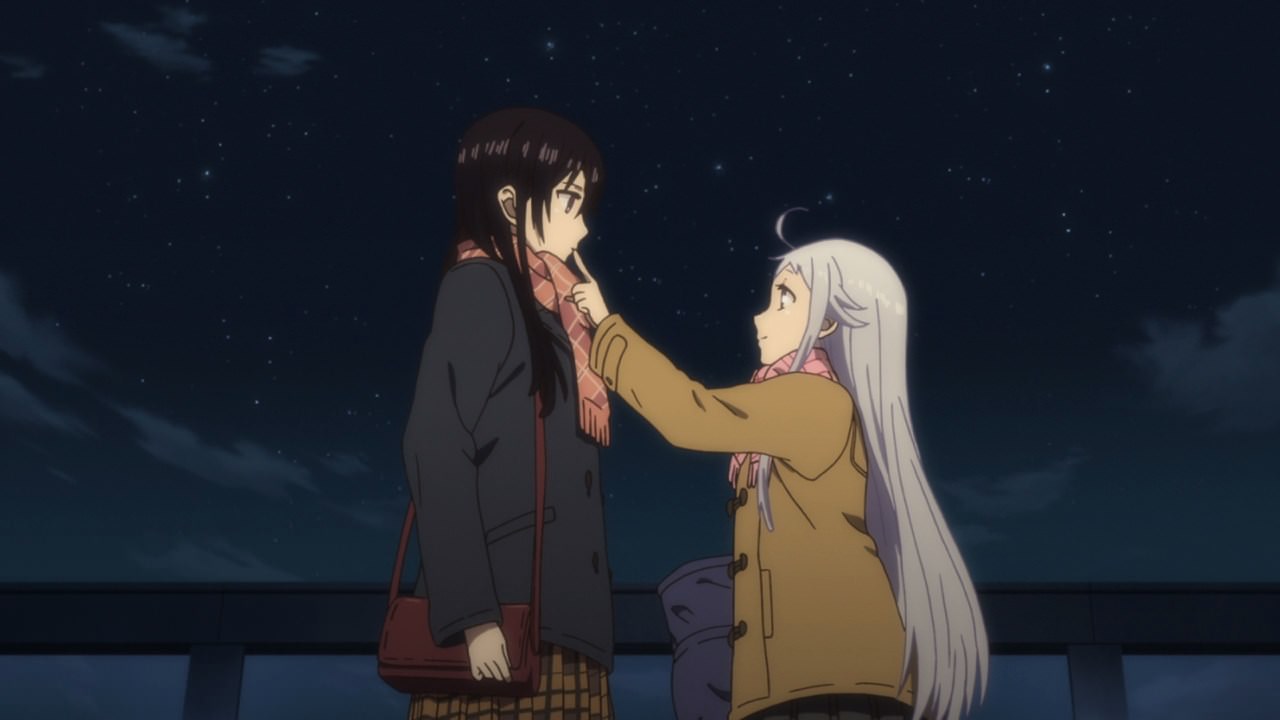 That of course is to find your own happiness as Sara Tachibana told Mei Aihara about it.

C’mon, Sara won’t be happy if Mei can’t be a little bit selfish to the most important person in her life. 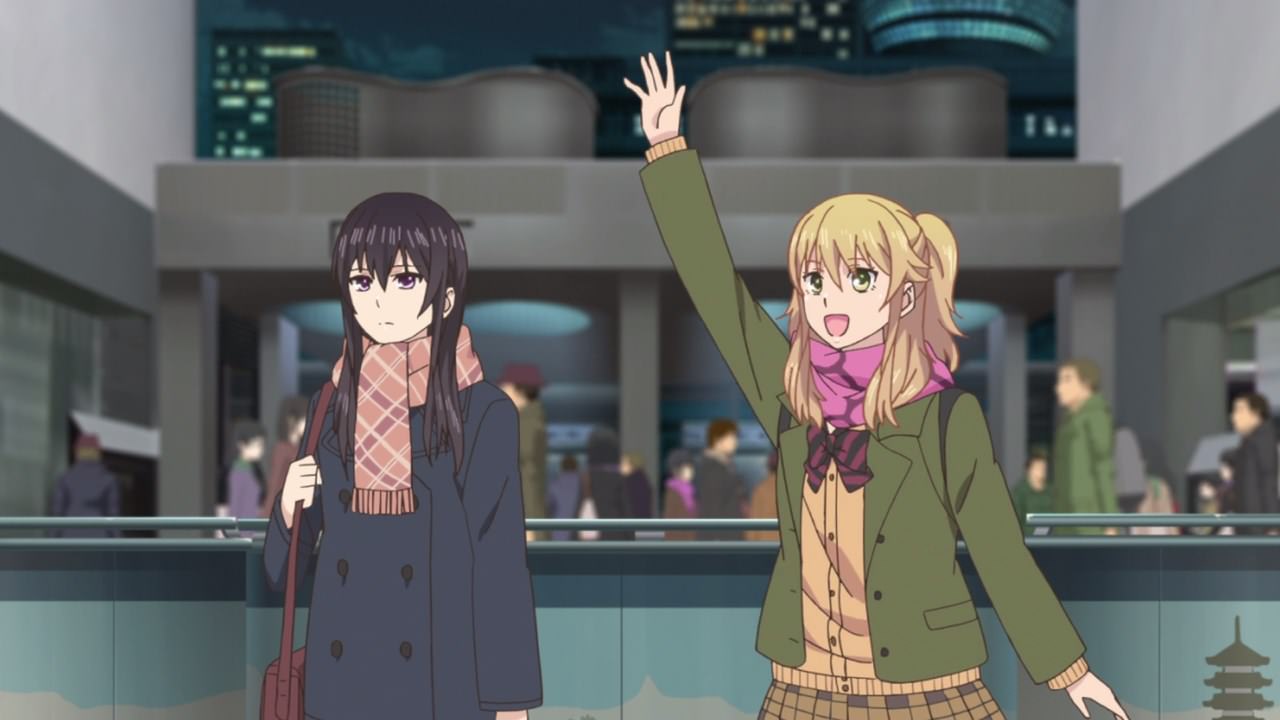 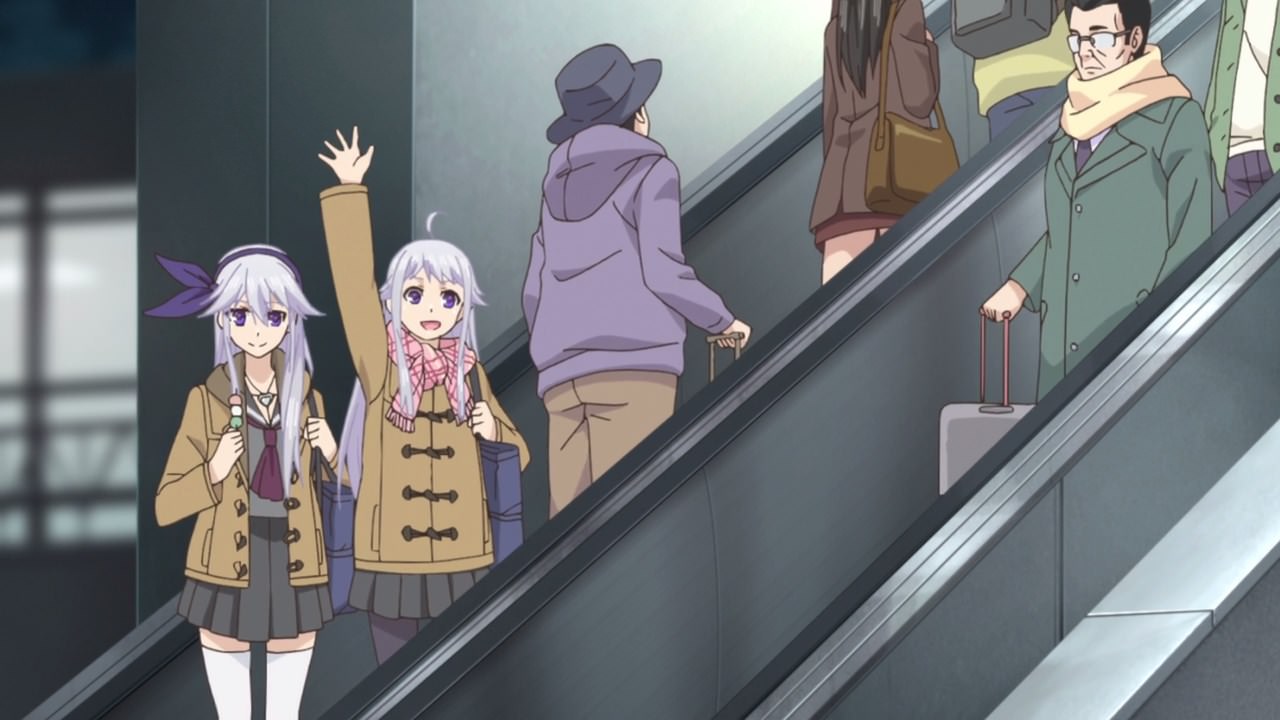 Anyways, it seems that it’s time for Sara and Nina Tachibana to take their leave. Sure that Nina wants her older sister to be happy with Mei Aihara, but Sara wanted to support Yuzu’s love for her step-sister in the end.

Maybe someday, Sara might find someone who’ll make her happy as long as that person isn’t a jerkass. Oh, and I’m hoping that Sara Tachibana will date a girl ’cause I don’t think she won’t be happy in the long run when dating a guy. 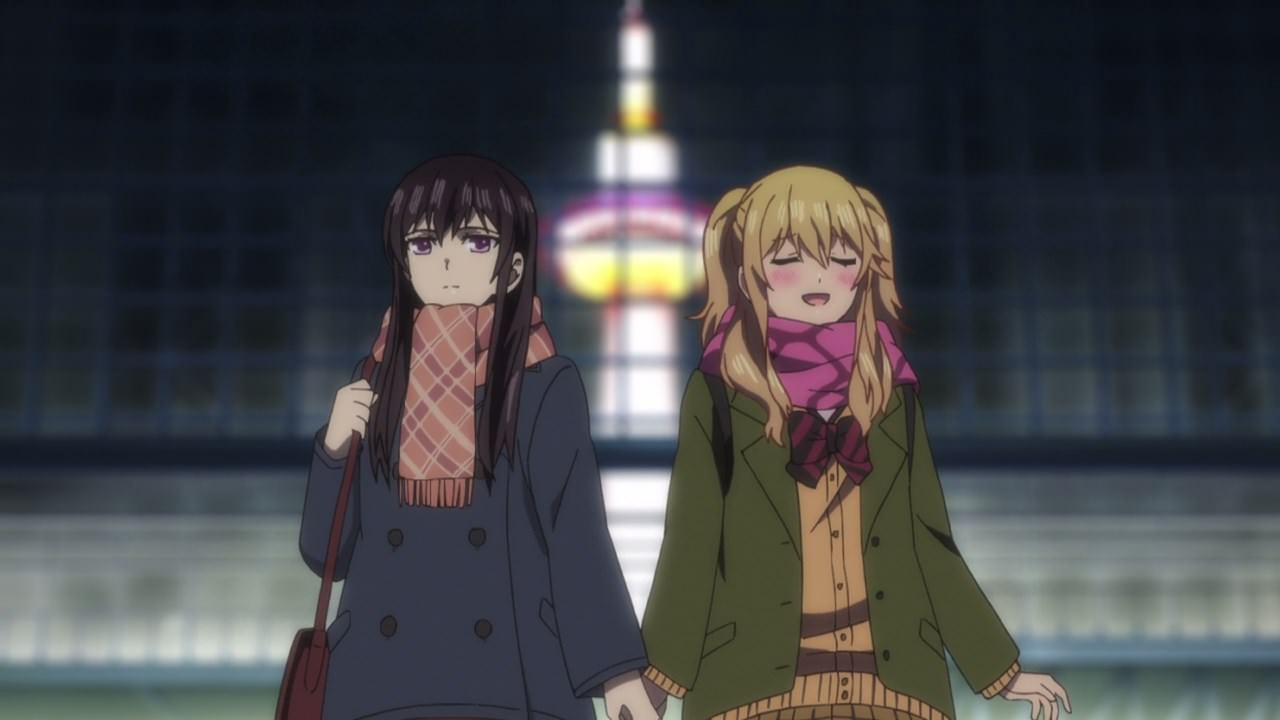 Well everyone, this wild ride that is Citrus has ended as I show you the final shot of Mei and Yuzu Aihara holding hands. Yeah, it’s cute and all that, but Mei did it because Sara told her to do so. But hey, nobody got hurt badly in the end, especially both Mei and Yuzu Aihara in which they got together in the end.

I must say that Citrus is a decent show to watch, although I found some characters that I don’t like much such as Matsuri Mizusawa. Man, I don’t like her for being such a clingy bitch that Matsuri tried to blackmail Mei. Other than that, everything looks decent to watch as there are some interesting moments that happened on this show, such as Mei meeting with her father Shou Aihara after he’s away for so many years, Yuzu saving her step-grandfather even though he hated her, Yuzu getting angry at Matsuri for manipulating her step-sister, the list goes on.

Still, Citrus is somewhat better in my opinion than that cringe-worth show like Netsuzou TRap. With that said, I give props to Passione for this decent anime adaptation and if you want to have another season of this, I’d say no because I’m pretty much satisfied with this ending.