Darling in the FranXX Episode #12 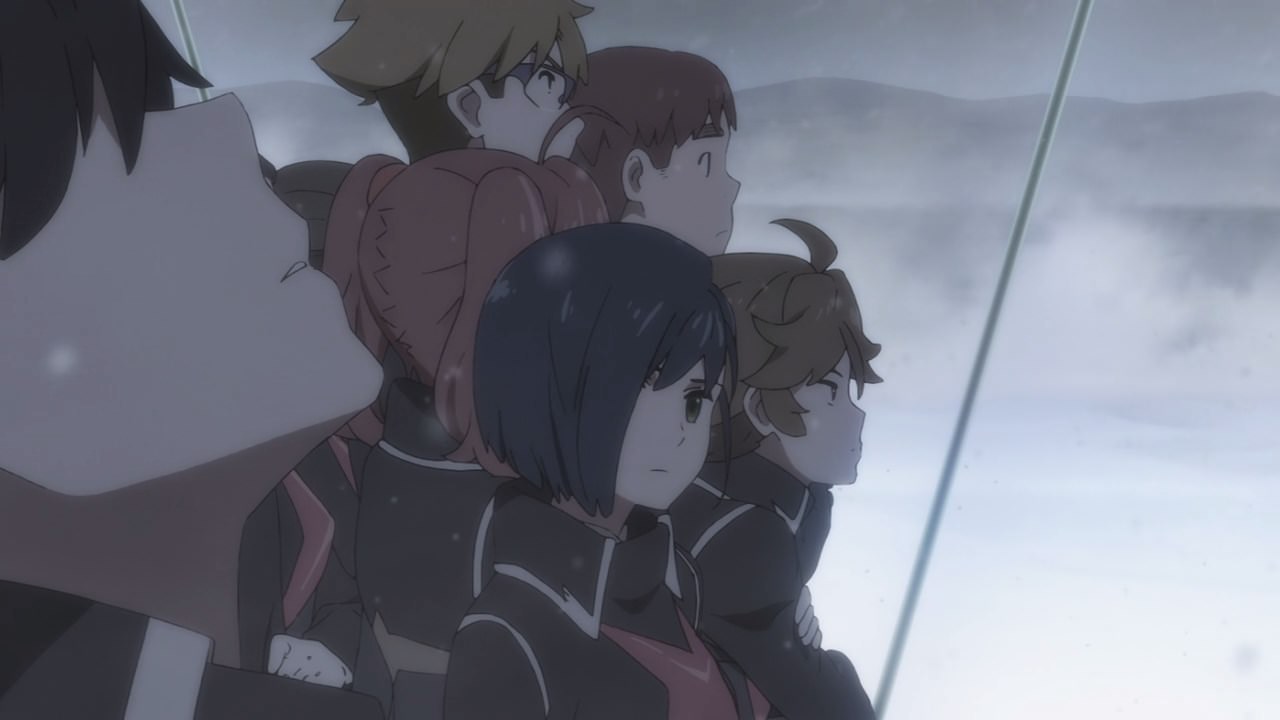 On this 12th Episode, Plantation 13’s FranXX Team will go to a place that’s familiar to them when they were just children. 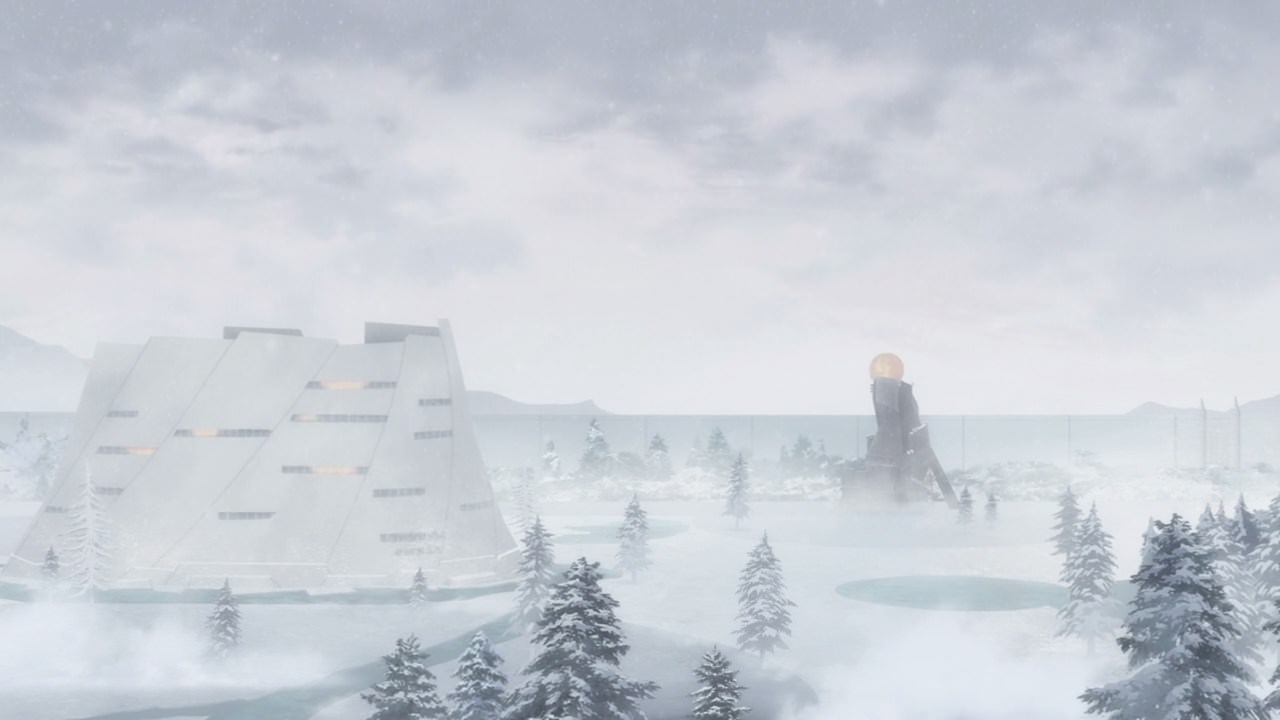 This is The Garden, a place where they grew up together. And standing adjacent to The Garden is The Laboratory where Code:016 “Hiro” and the rest will go there. 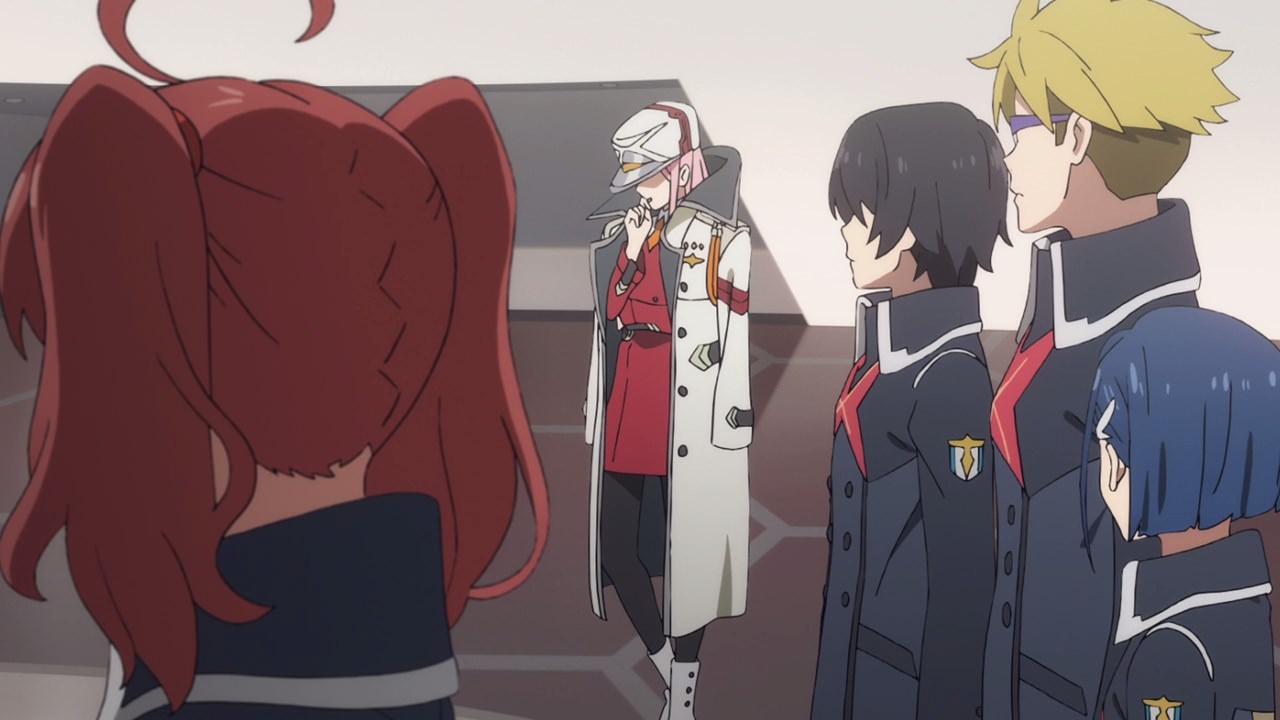 By the way, seems that Code:002 “Zero-Two” will be joining them as she’ll be having some tests.

While we’ll never know the full details of these tests, but let’s assume that it relates to her klaxosaur blood. 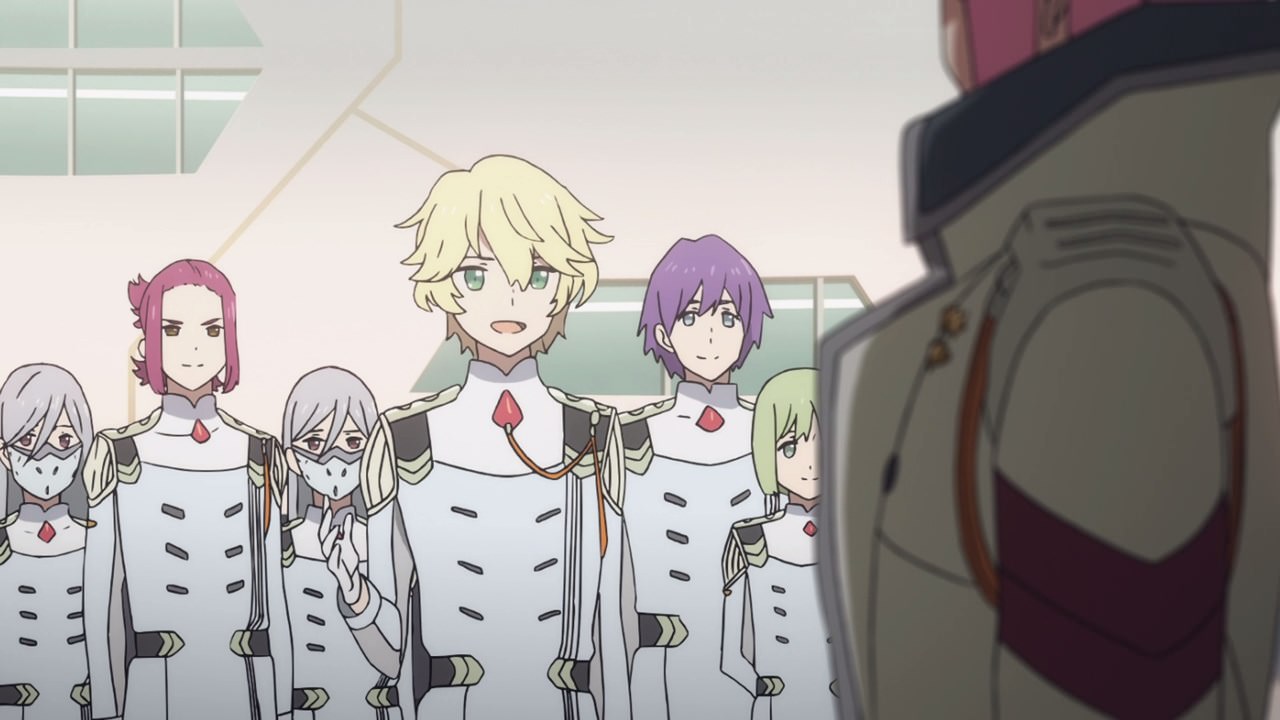 Anyways, 9’α “Nine Alpha” is surprised that Plantation 13’s FranXX Team managed to tame Nine Iota or Zero-Two as the rest of the 9’s couldn’t handle her destructive behavior. But more importantly, he’s curious to see the likes of Code:015 “Ichigo” and Code:016 “Hiro” since Dr. Franxx created this squad out of curiosity. 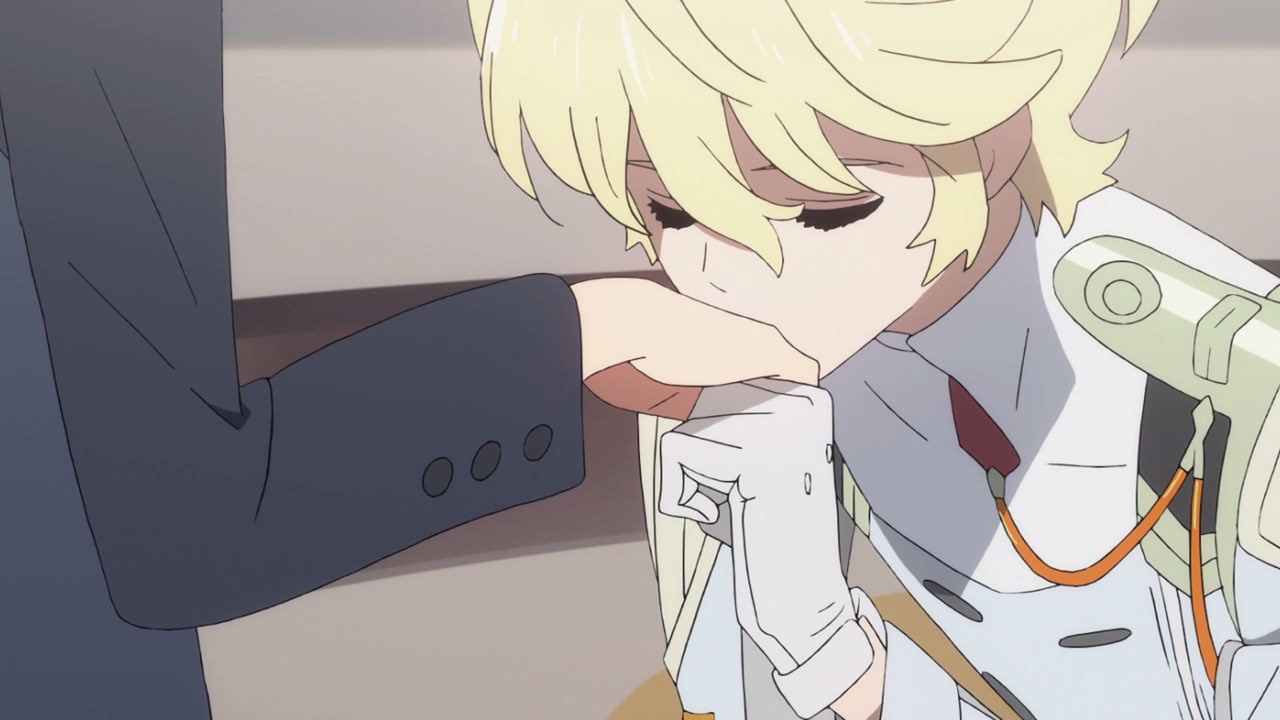 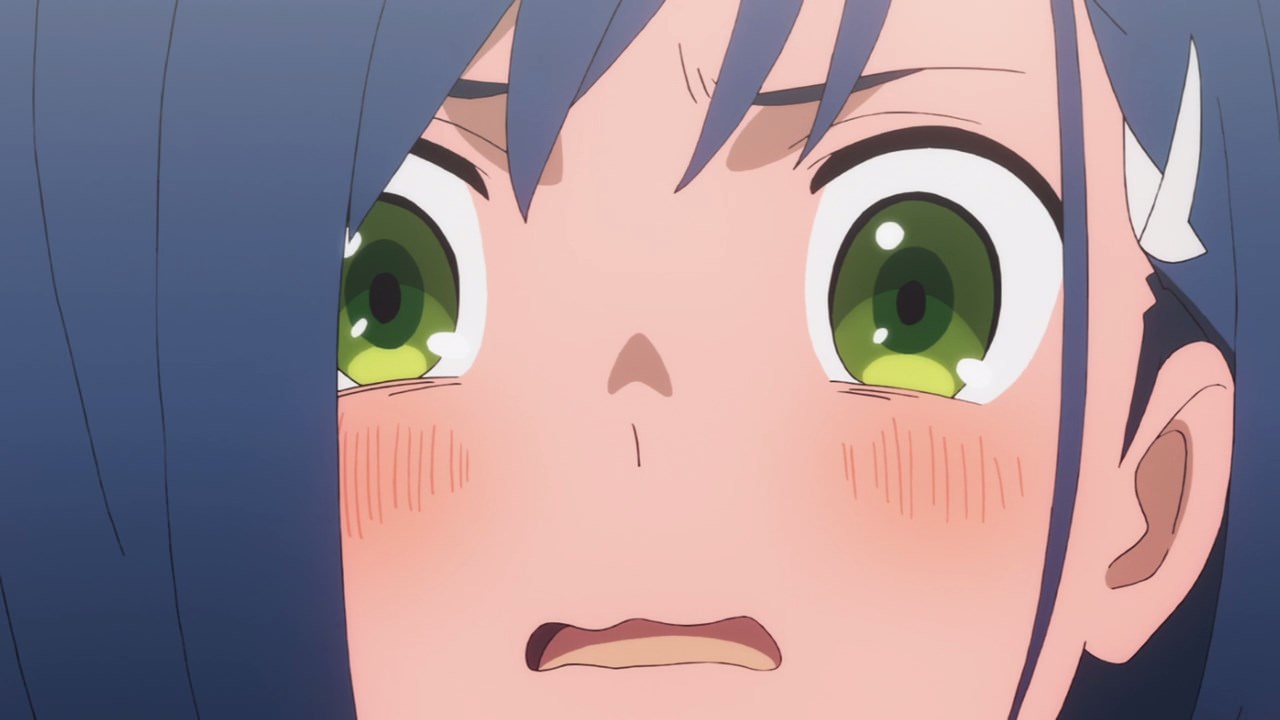 Then again, seems that Nine Alpha got a liking to Ichigo as he kissed her hand. Uh Nine Alpha, you know that Ichigo’s partner is watching right? I guess he didn’t get the memo! 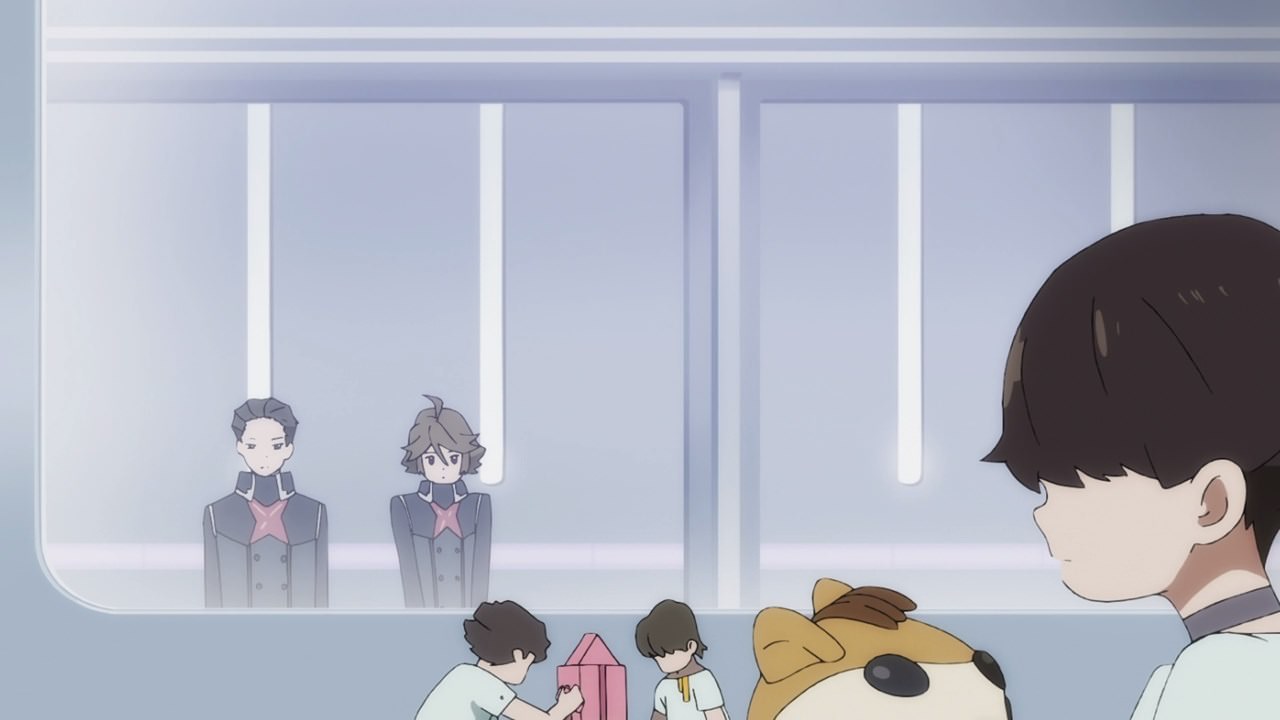 Now then, let’s go back to what’s important as the likes of Code:666 “Zorome” and Code:326 “Mitsuru” explore The Garden where they’re subjected to various tests until they’re fit to be parasites.

But unlike their time which they’re the lucky ones who survived the ordeal, most of the kids inside The Garden are not so fortunate as they’re fully-obedient towards the adult and if they fail, they’re disposed without a second thought of escaping the facility and live to tell the horrible tale of being a lab rat there.

With that said, this place is not being welcomed by the Plantation 13’s FranXX Team and the adults forbid them to interact with the kids. Heck, APE forbid Hiro and his team-mates to set foot into The Garden in the first place! 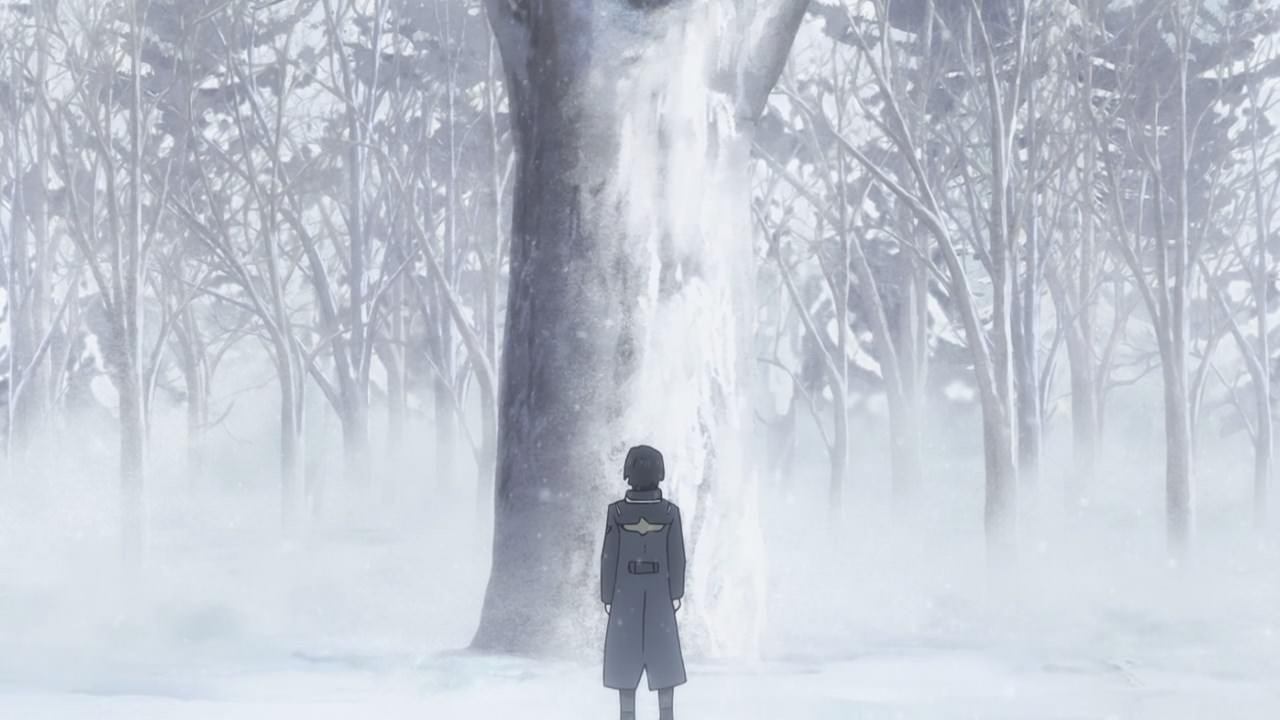 Speaking of Code:016 “Hiro”, he stumbled upon a mistletoe tree where Hiro remembered something from the past… 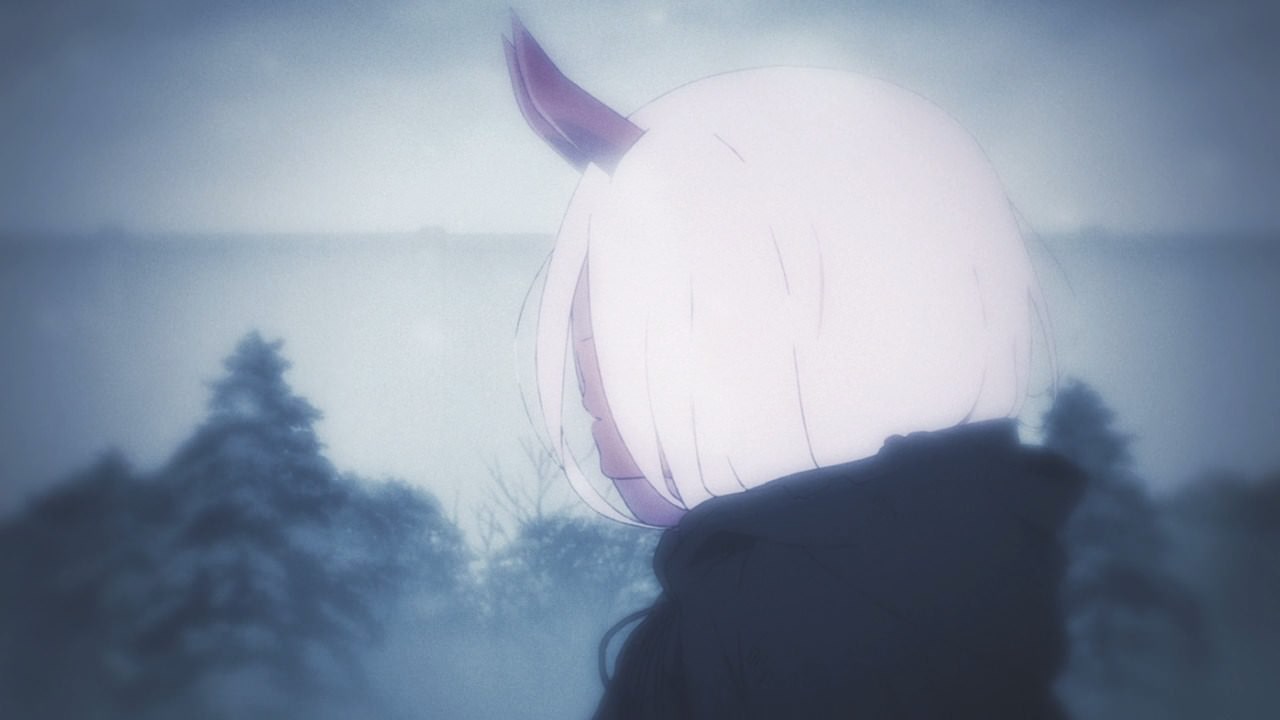 It turns out that he met a human with horns, white hair, and red skin. Hmm, could it be that Hiro previously met Zero-Two back when he was just a kid? This is an interesting find there! 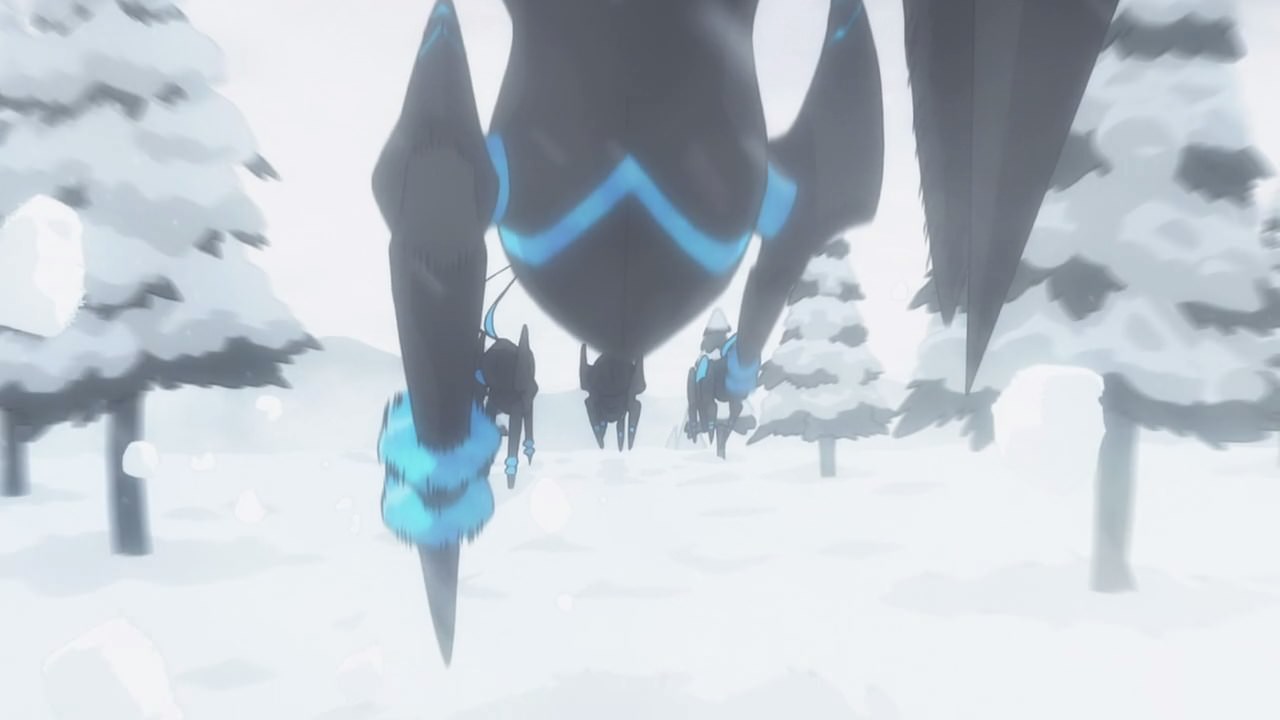 Speaking of klaxosaurs, a pack of Moho-class klaxosaur has arrived at The Garden. While we don’t know what these klaxosaurs up to, but APE doesn’t want them getting closer to their precious facilities. 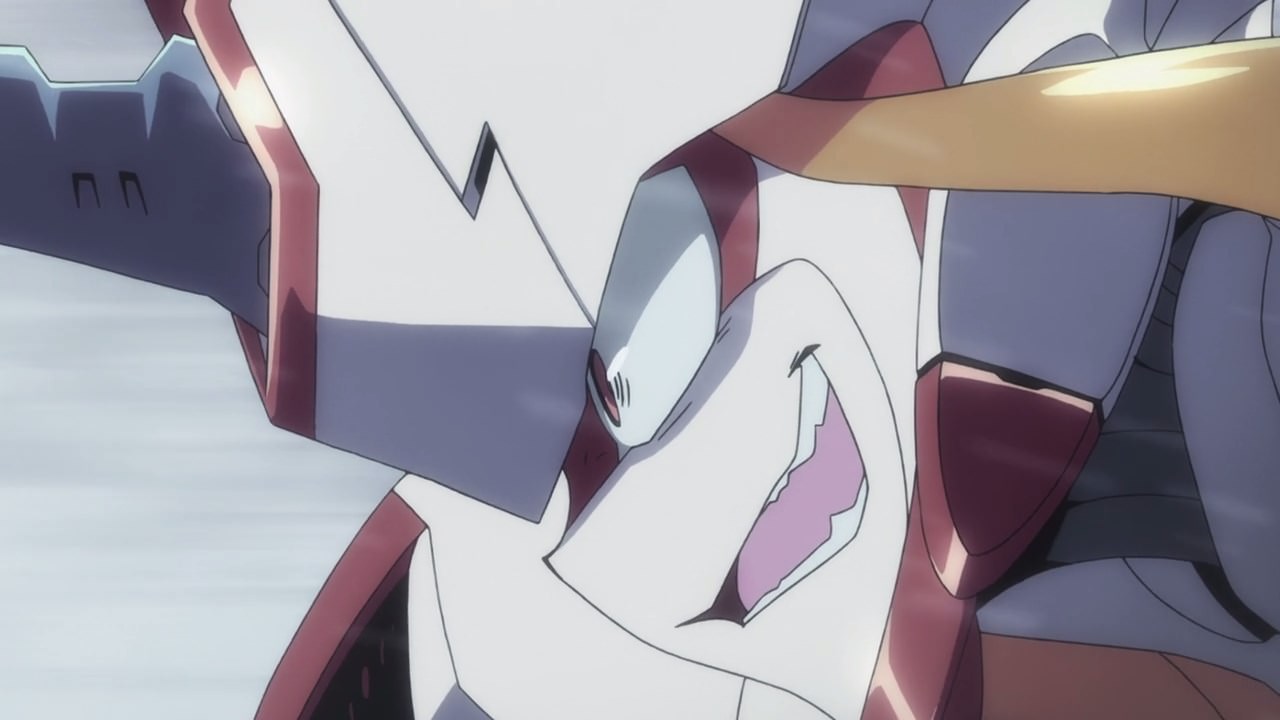 Thus, Plantation 13’s FranXX Team sortied to defend both The Garden and The Laboratory from the klaxosaurs since those facilities are important for Papa and the rest of the adults.

On the other hand, seems that Code:002 “Zero-Two” is getting very aggressive lately as she’s itching to kill those klaxosaurs off. 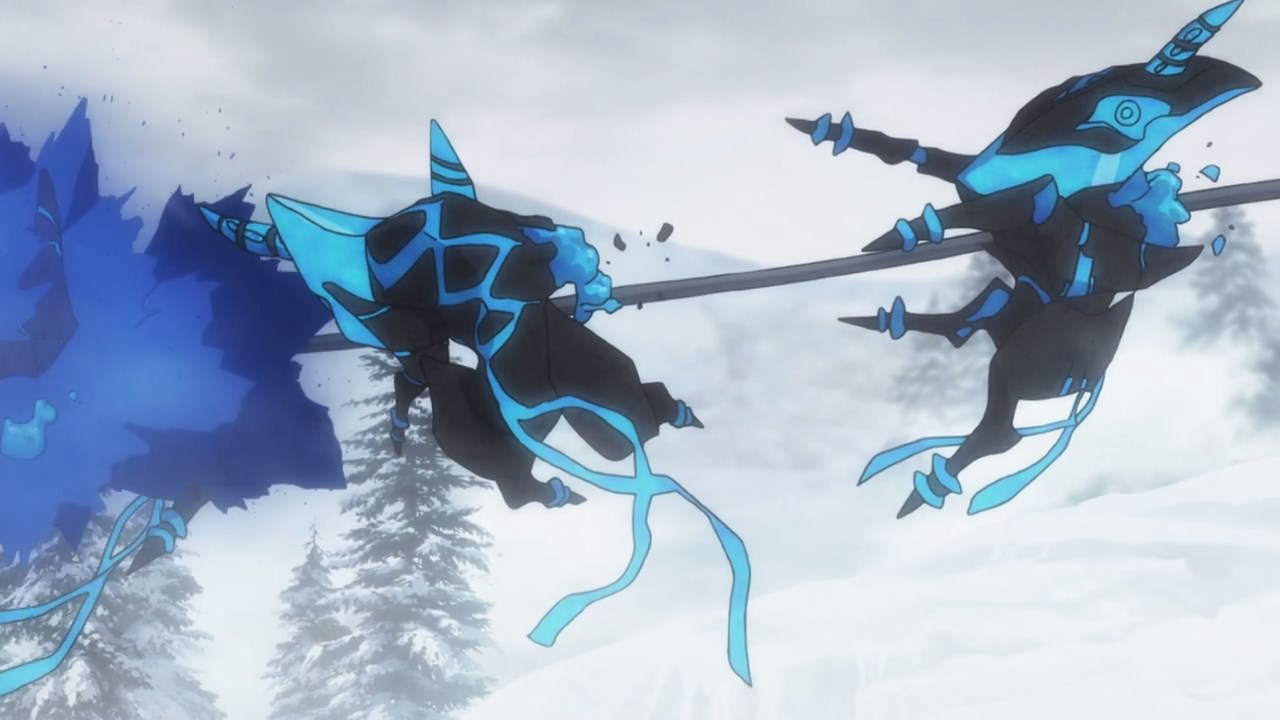 Hell, she managed to kill 3 of them in a row. But then again, Code:016 “Hiro” is worried about her unstable behavior as it wasn’t supposed to be like this when Hiro first met Zero-Two. 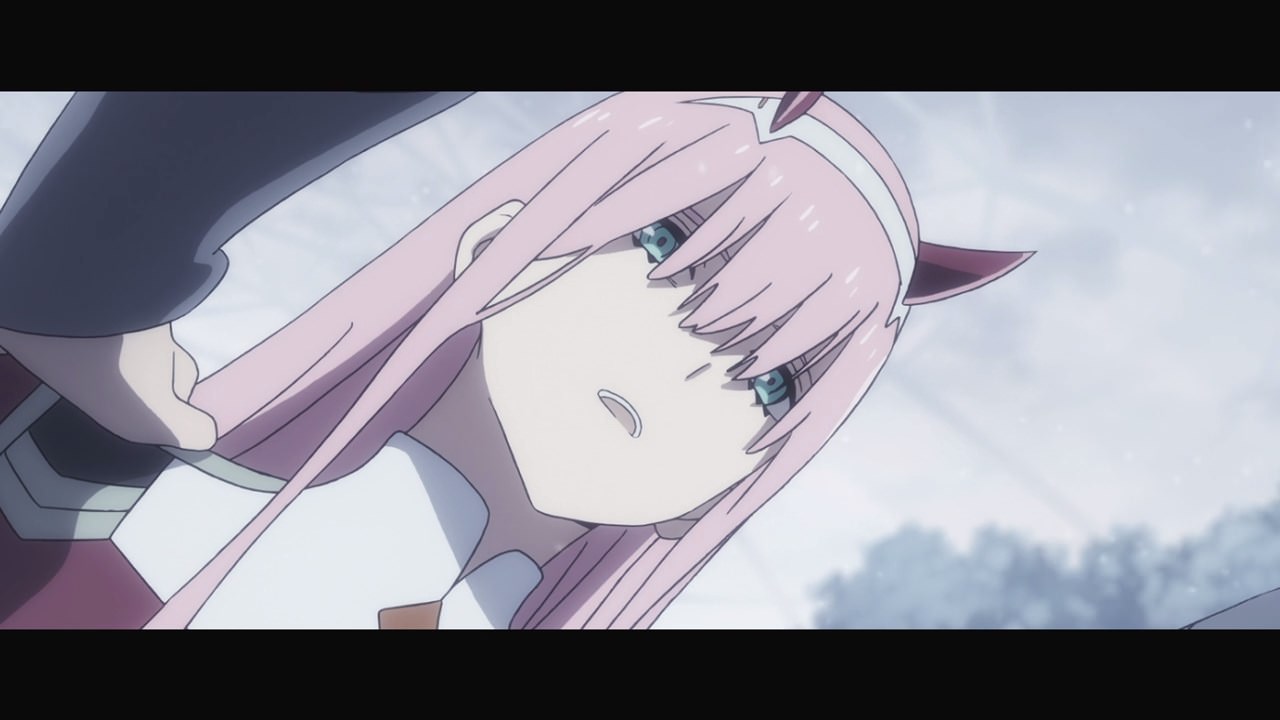 So, Hiro decides to do the most daring thing to calm Zero-Two down. I mean, she needs to be tamed by someone who’s very calm. 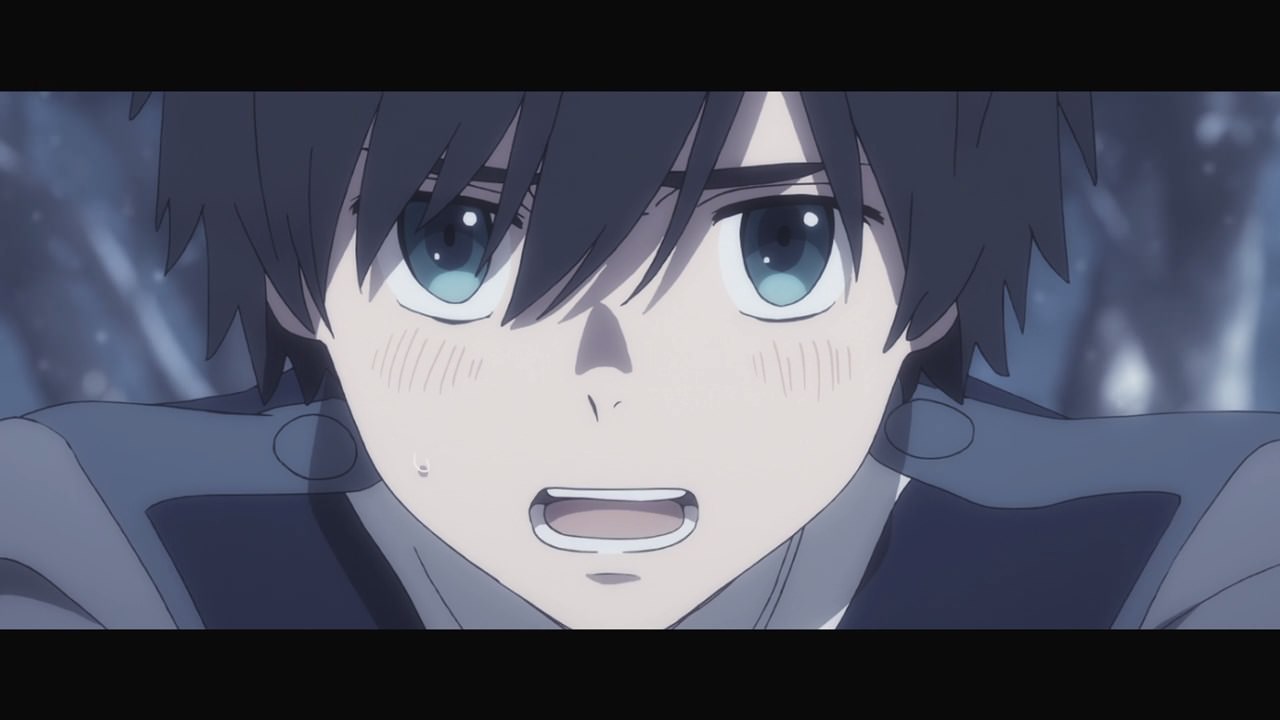 And that’s by saying “I love you!” in front of his partner. Wow, that was brave coming from Code:016 “Hiro” but I have a feeling that he’s gonna regret it in the future. 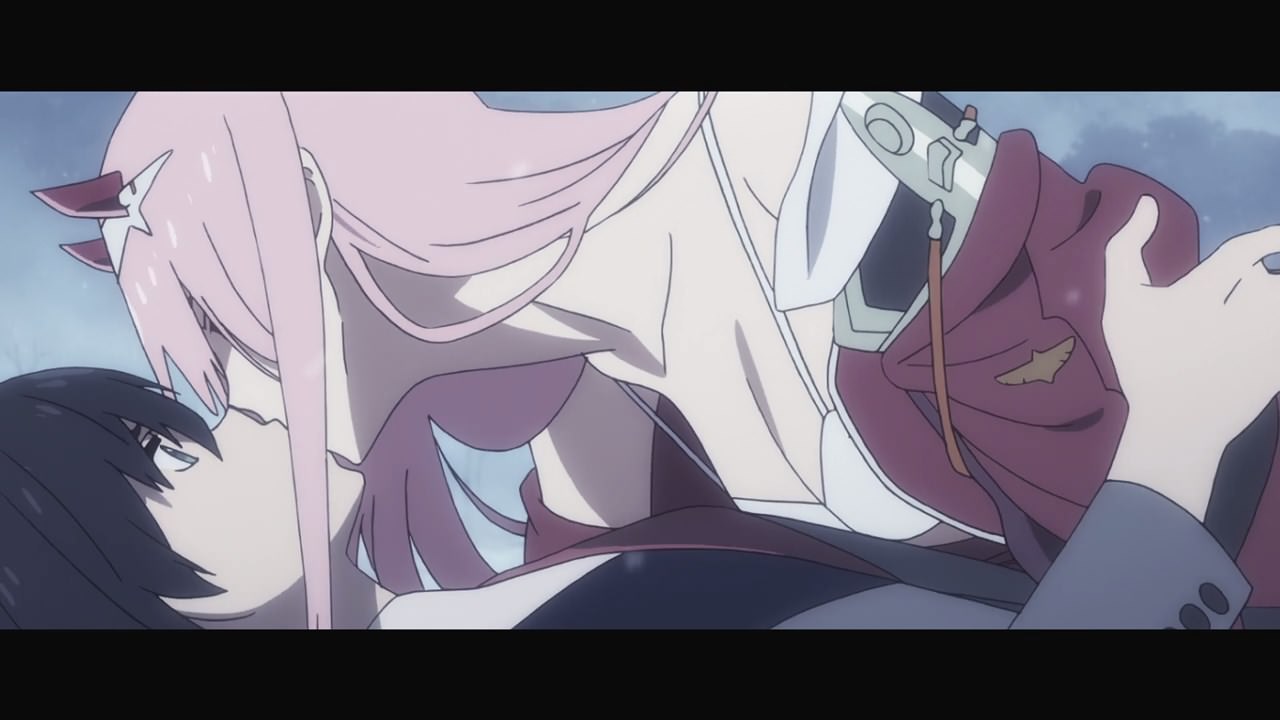 Of course, Zero-Two interprets love as an euphemism for sex as she puts Hiro down and kisses him, but in a rougher action.

Then again, it’s not what he wanted as Hiro earnestly wanted to love Zero-Two in an emotional sense. Unfortunately, she didn’t get it at all because it turns out that Zero-Two is just using him as a tool, or a stepping stone in order to become a human.

Man, that was harsh coming from Code:002 “Zero-Two” as Code:016 “Hiro” puts his trust onto her. Then again, it appears that Hiro didn’t get the memo from Dr. Franxx’s warnings on not to be close to her. Also, the desire for Zero-Two to become human? I don’t think she’s not gonna become one much like how Pinocchio turn from a wooden doll into a human being, because the irony of her actions may affect her partner very much… 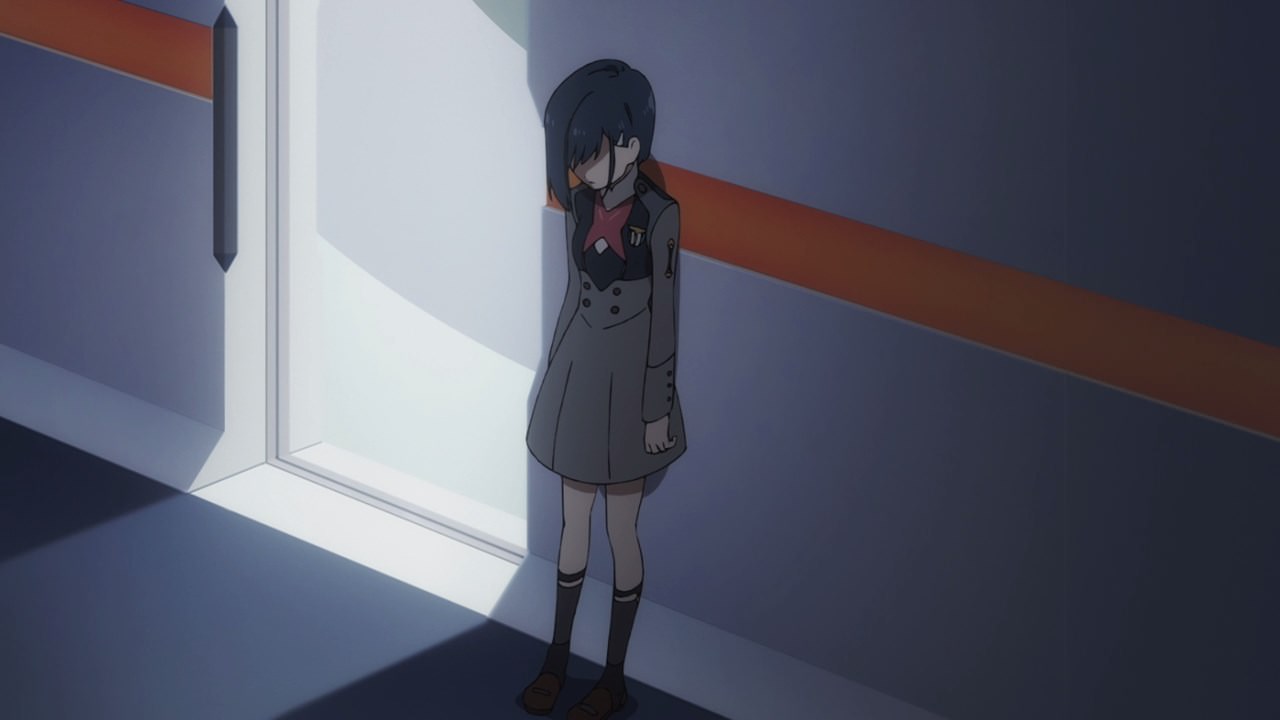 In fact, Code:015 “Ichigo” learned that Code:016 “Hiro” is undergoing a process of saurification, basically turning him into a half-human/klaxosaur hybrid much like Zero-Two. Then again, it appears that the events during Episode 6 has started the saurification for Hiro and he continues to change as we speak.

But that’s the end of Episode 12 and damn, the plot is getting deeper ever since Episode 10 aired and it continues from there. So with the revelation that Code:016 “Hiro” might become a half-human/klaxosaur hybrid, I have a feeling that Papa and his council will take some action if it gets worse for them, even if it means destroy every evidence or even silence those parasites for knowing too much.

Anyways, I’ll see you next time as next month will be the start of the second half of Darling in the FranXX!