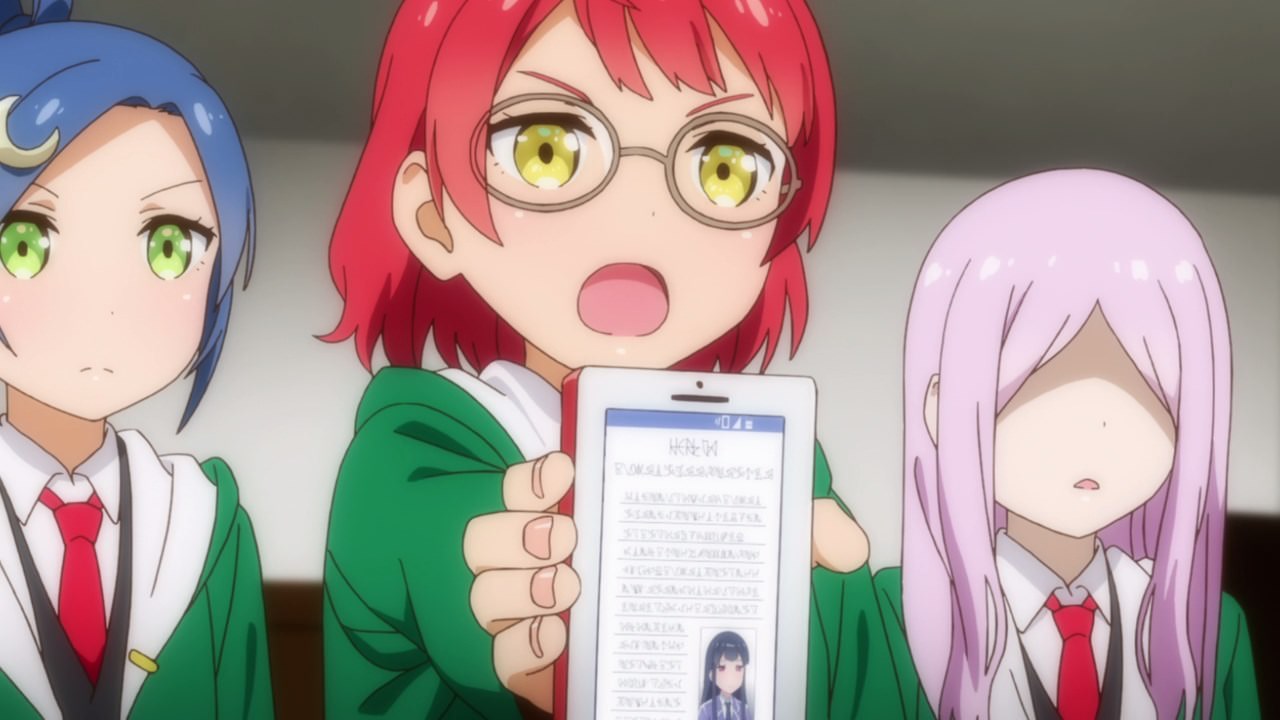 Well, it appears that the American team are in a crisis as both Cameron Welles and Drew Verhoeven has decided to pull out from the competition as they couldn’t stand Lynne Daves’ constant cheating.

How would the Committee allow her to compete is beyond me. Heck, even Lynne’s big sister Angelina couldn’t help it but do nothing to stop Lynne from cheating her way to victory. 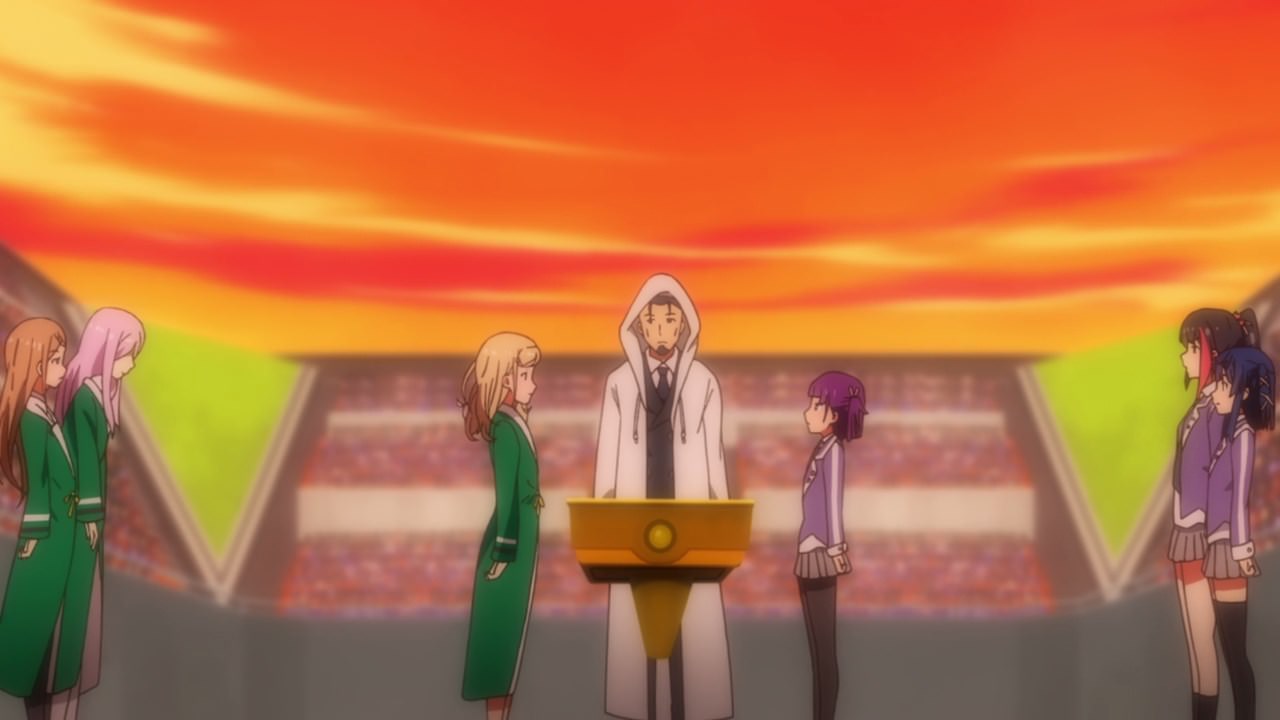 With that said, both Cameron Welles and Drew Verhoeven’s withdrawal has left the American team with only 3 members, the Daves sisters and Lucy Burton.

Because of the changes, it’ll be a 3-vs-3 match with the Japanese team consisting of Hazuki Kagimura, Ariko Kasumi, and Mai Sadohara. Yeah, it’s sucks that Shizuka Tsuchimikado have to pull out because someone from the Committee managed to get a hold of her Origin. 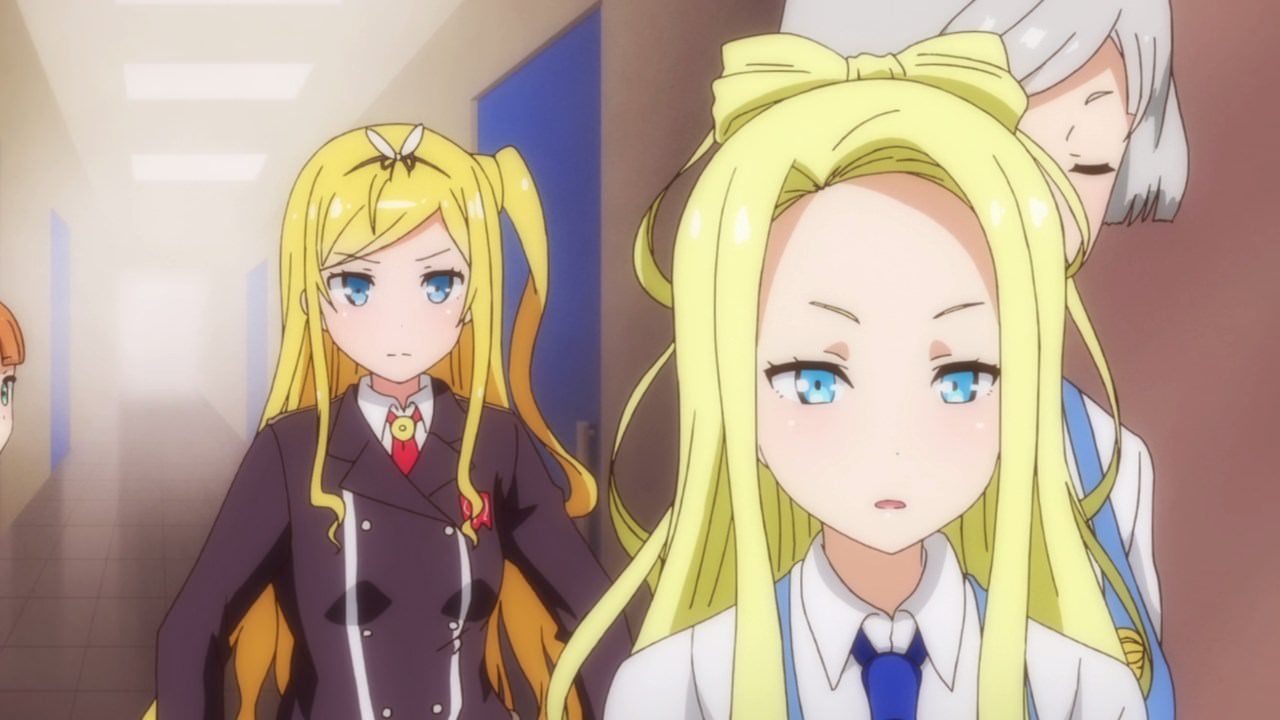 In other news, the British representatives lead by Arthur Pendragon have decided to retire from the Hexennacht tournament due to some urgent news that a great disaster will happen soon and she must do something to stop it from happening.

For Agathe Arier, she’s disappointed that the British team pulled out because of some accident that’s about to happen. But anyways, Team Germany will advance to the finals. 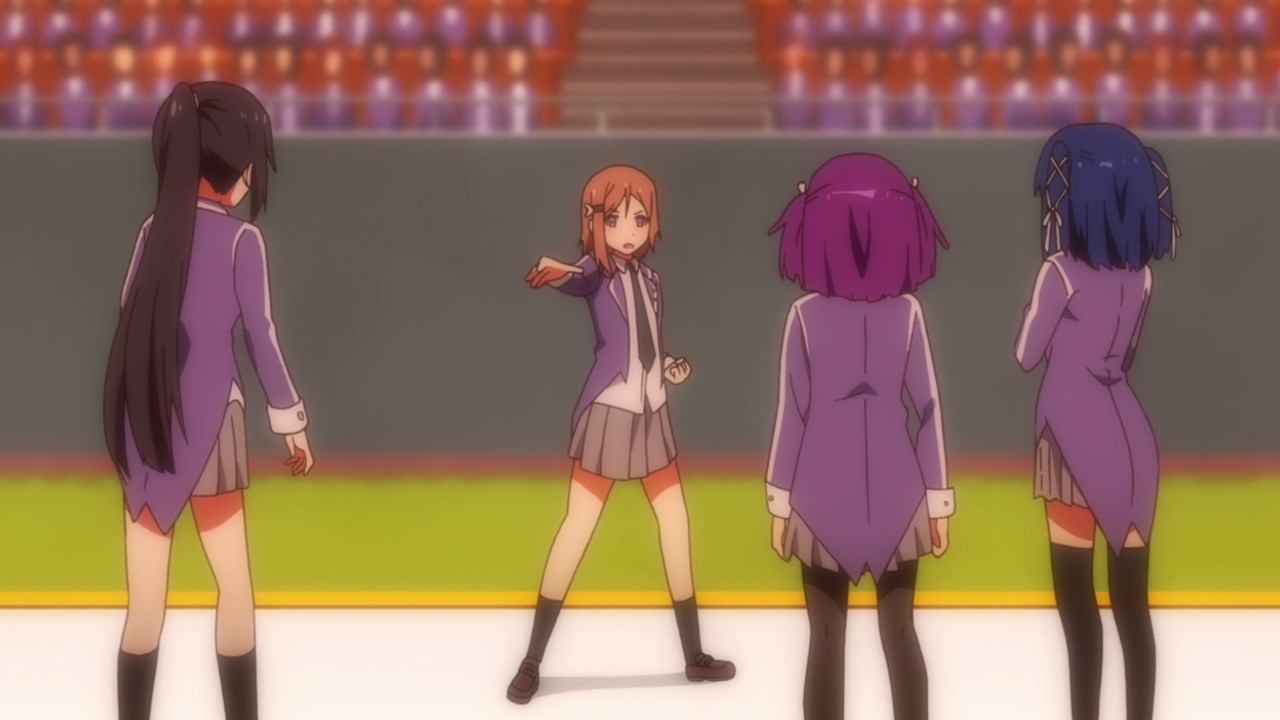 Now let’s go back to the other semi-finals match where it appears that Sachi Hino has arrived to help Team Japan. Um Sachi, you should have joined your teammates before the match proceedings. 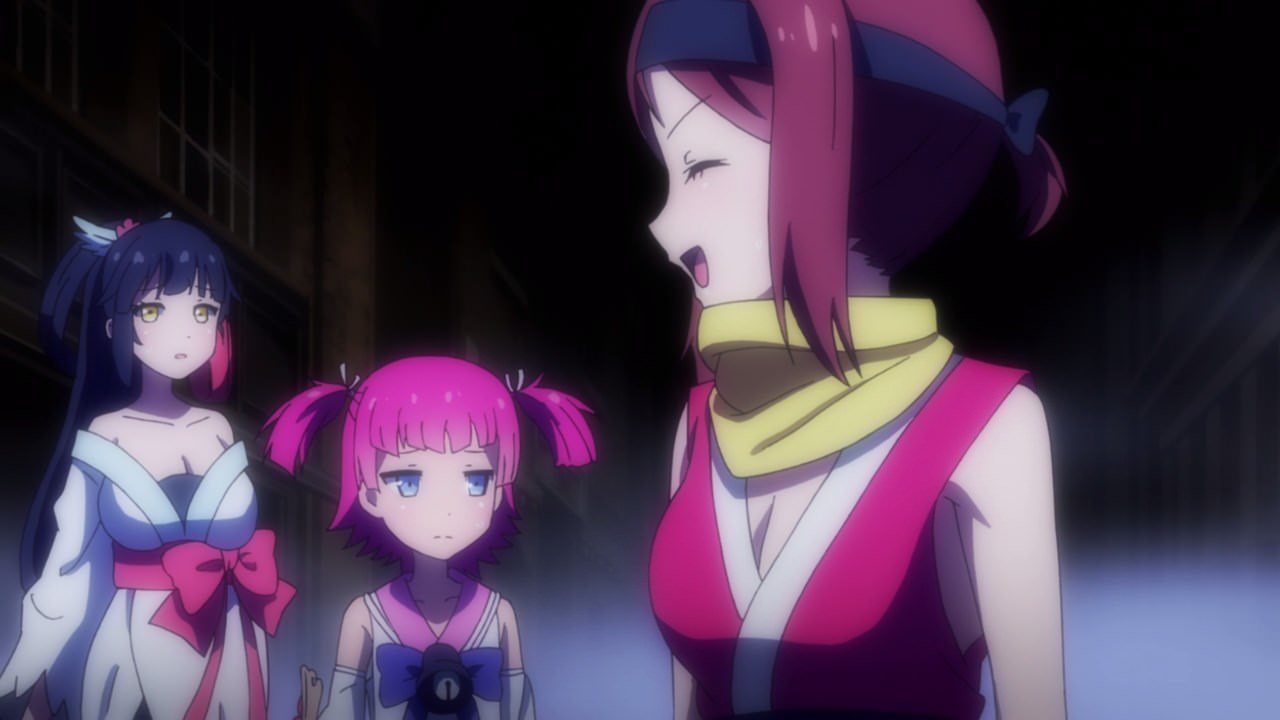 Fortunately, the match officials allow it and now the semi-finals has become a 4-vs-3 match. At this point, the judges simply give up as Mädchen will always intrude the battle. But anyways, Team Japan will face Team America… 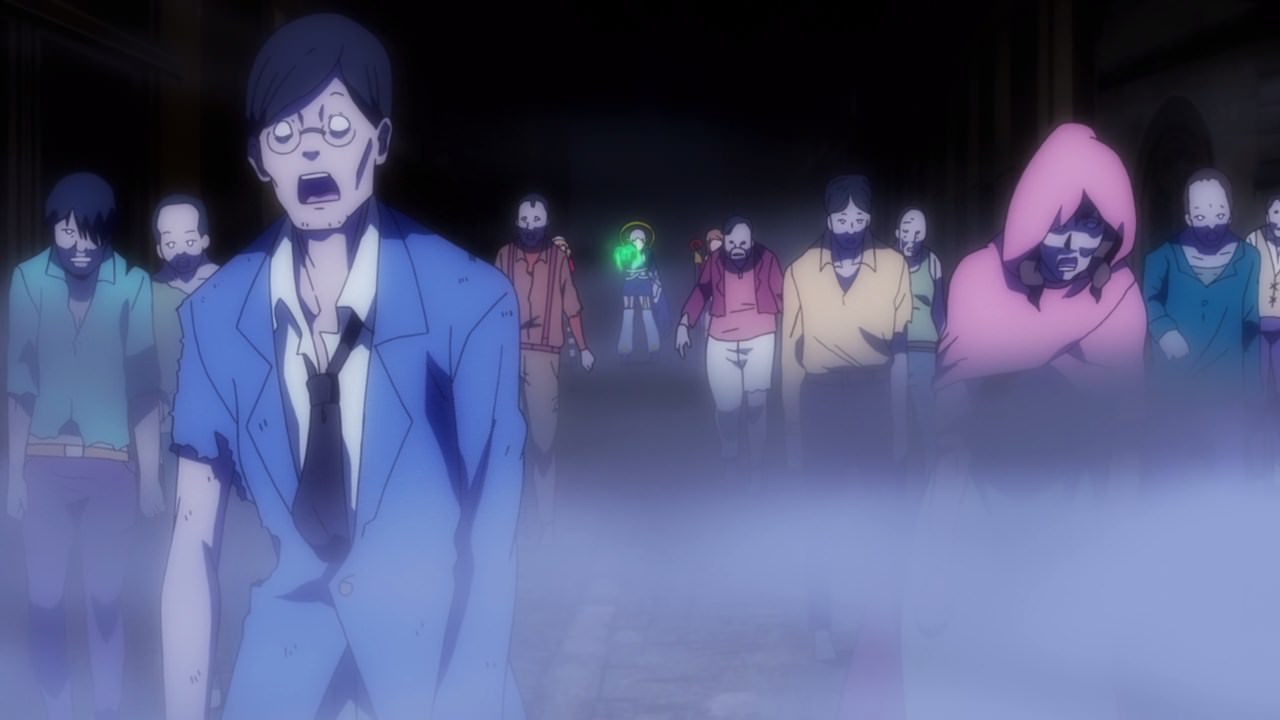 …where it seems that Lucy Burton used her Zombie Origin to summon a horde of zombies. Looks like Lynne Daves wants to overwhelm the opposing team with numbers alone! 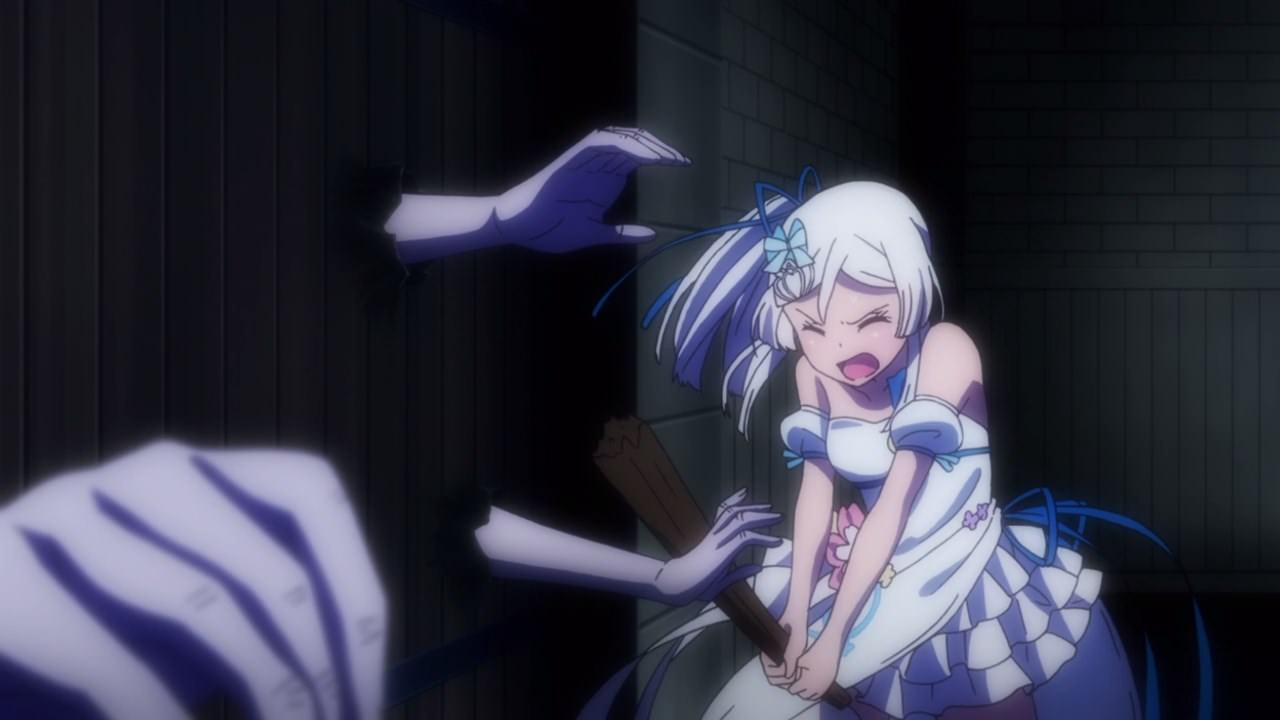 For the likes of Hazuki Kagimura, she doesn’t like horrible things that she and her teammates hide inside the church and block the entrance. Even then, it won’t work! 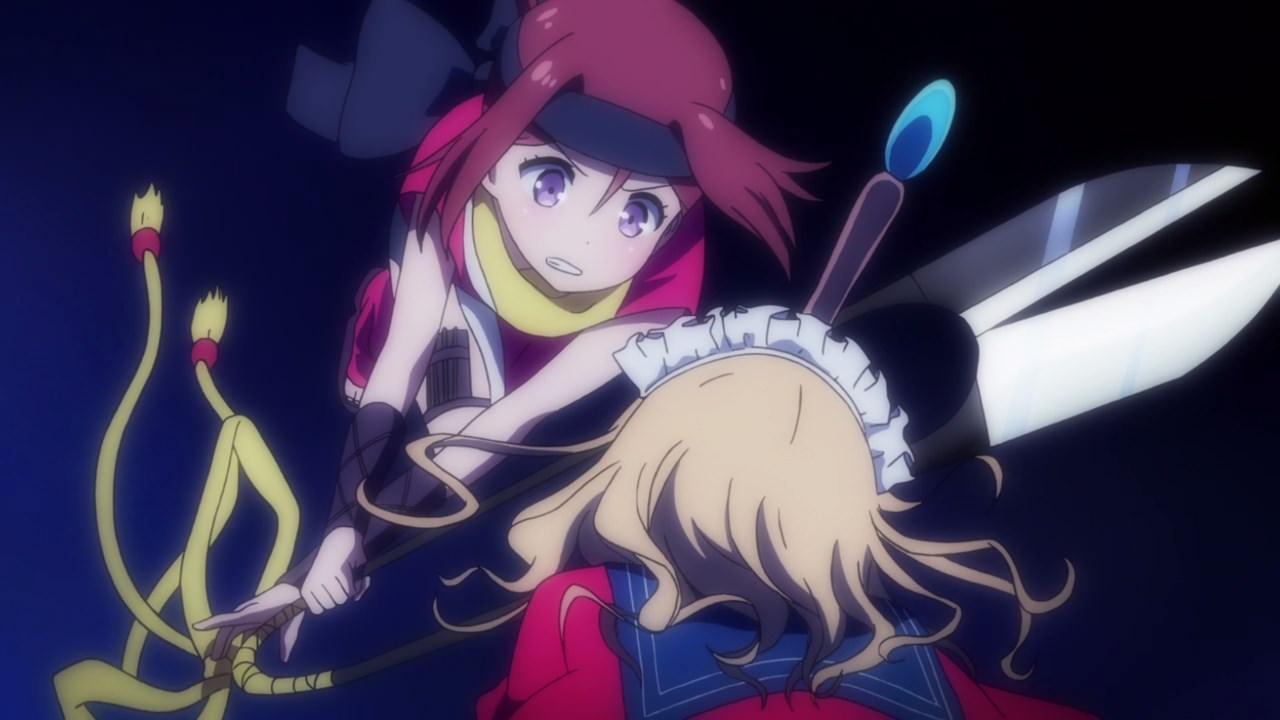 However, those who are outside are still fighting the American team with Sachi Hino used the Origin of Shita-kiri Suzume to cut opponents words for 10 seconds.

Oh and should Sachi speak, the Origin’s effects no longer work and she can’t cut it again. 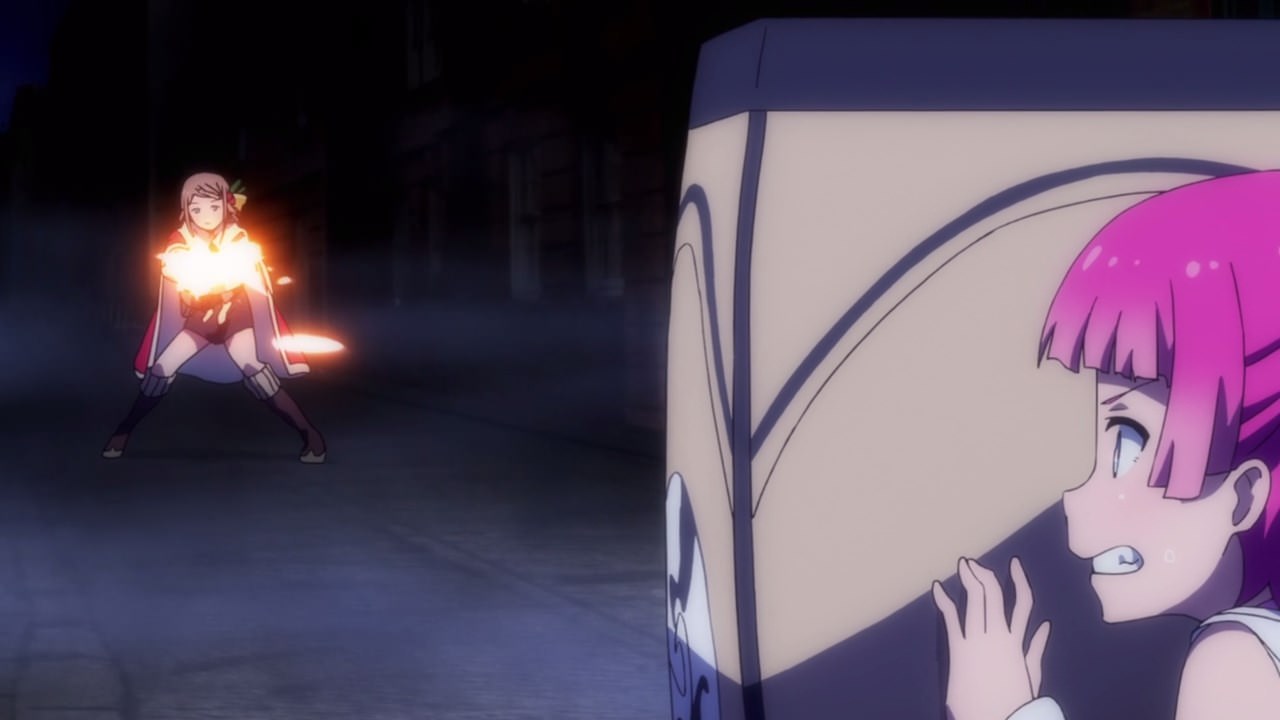 On the other hand, Ariko Kasumi is being cornered by Angelina Daves who used the Origin of Santa Claus to bring a present to Ariko… with bullets.

Seriously Angelina, that’s not how you depict Santa Claus! 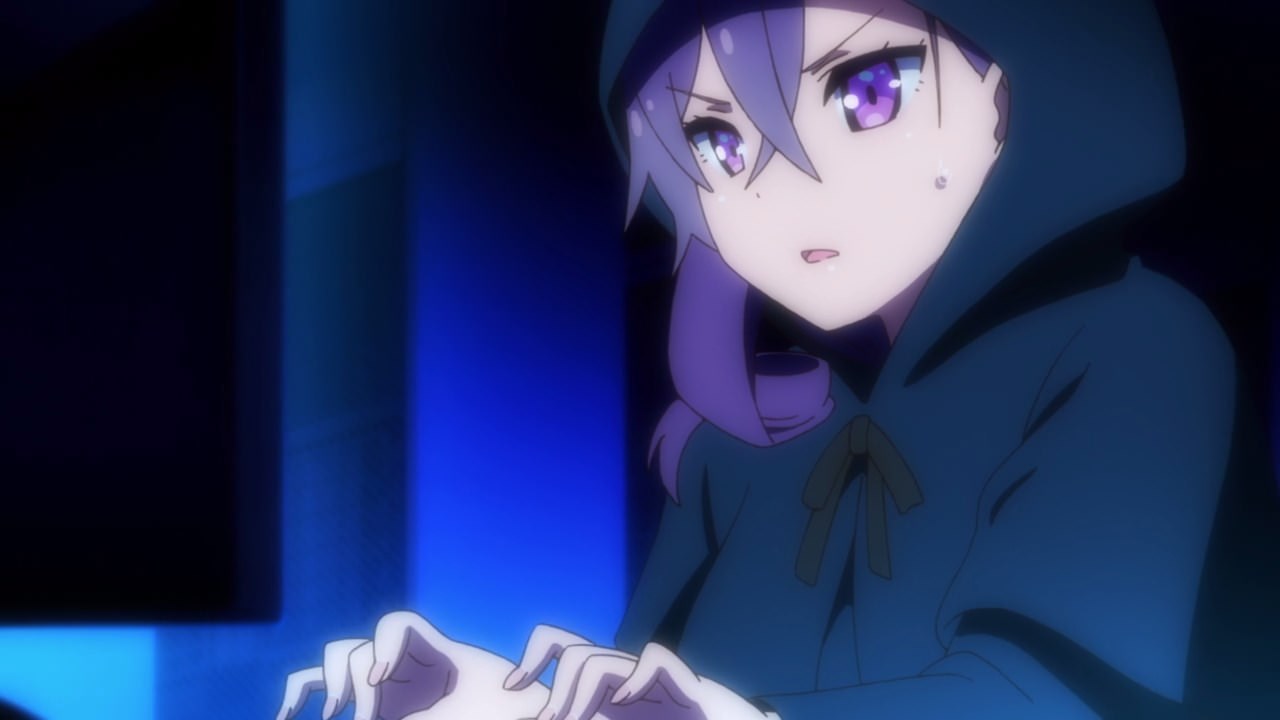 Meanwhile, Principal Sugami is trying to investigate in regards to Shizuka Tsuchimikado’s mother and it seems that she found something. 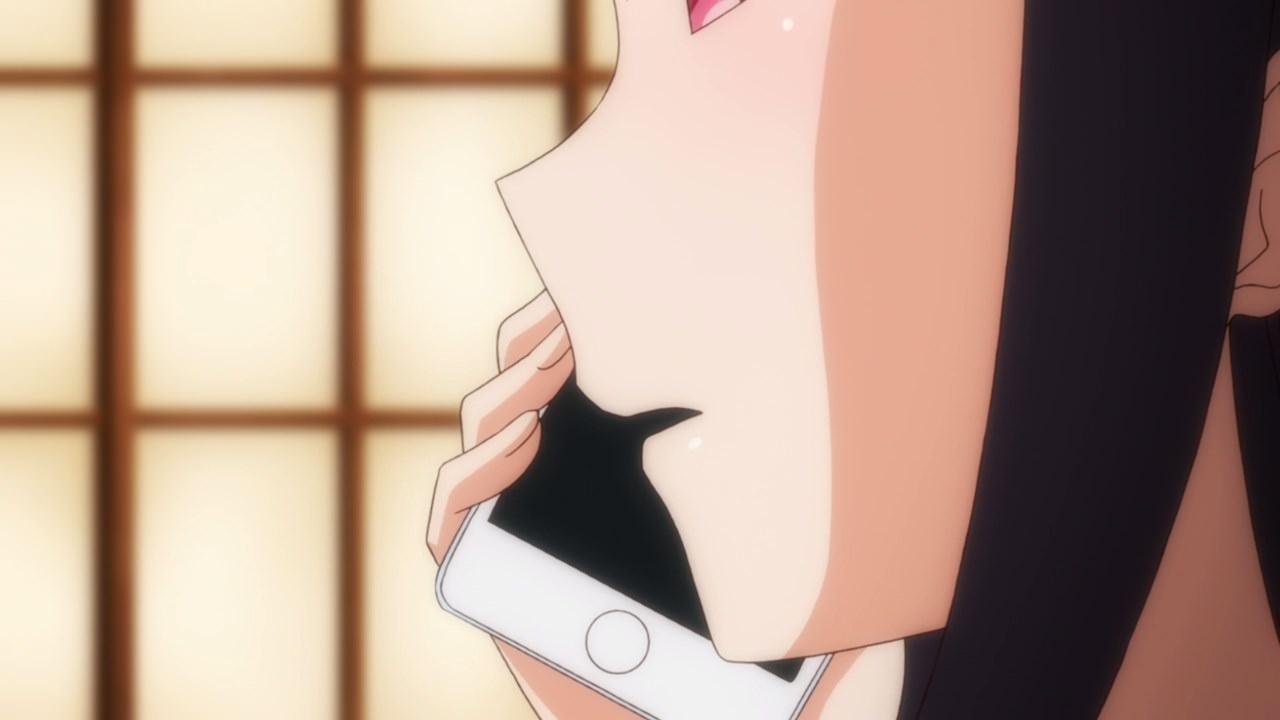 So when Principal Sugami found this important information, she told Shizuka that her mother didn’t fled the battle, but rather that the reports were forged because the Committee was pressured by Lynne and Angelina’s adoptive father James Daves.

Well, it seems that the Committee are morally-bankrupt that they’ll do whatever it takes out unwanted schools to monopolize the Origins, even as far as getting some influence from James Daves who’s known for being an arms dealer. 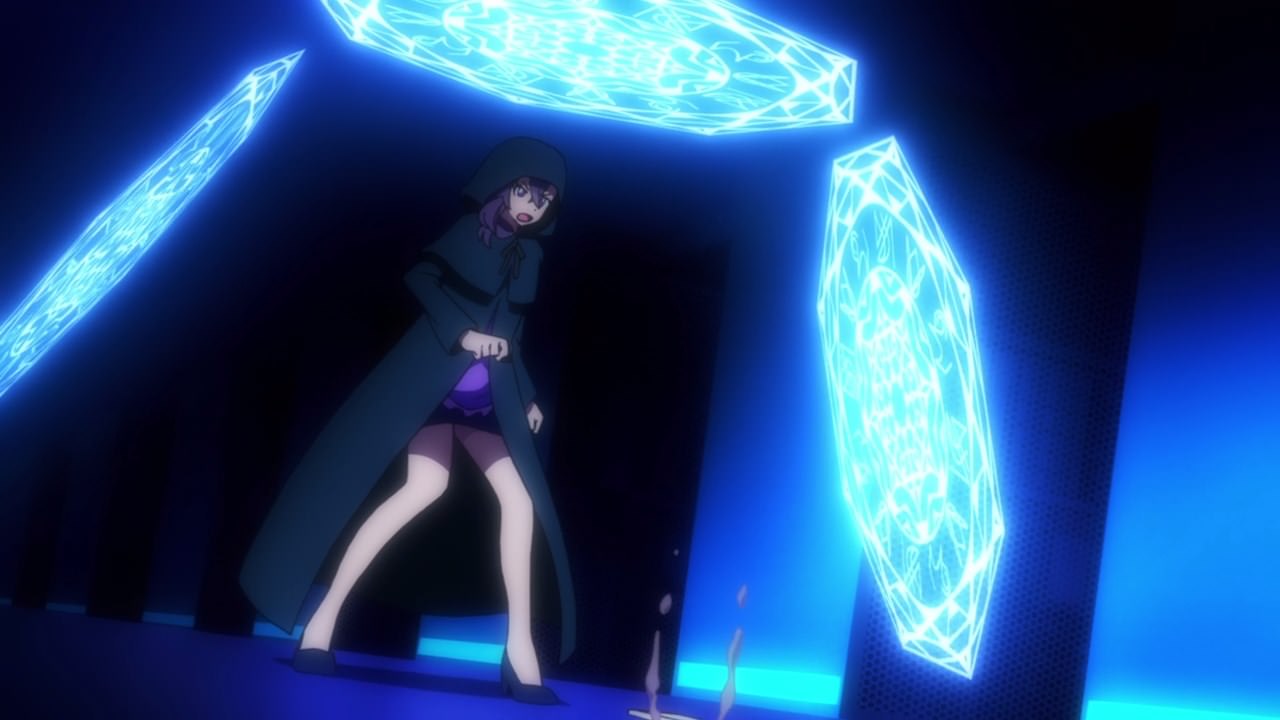 Unfortunately, it seems that someone sabotage Principal Sugami’s attempts to gather evidence regarding James Daves’ collusion with the Committee.

I have to say that the Committee will get away scot-free at the end of this series. 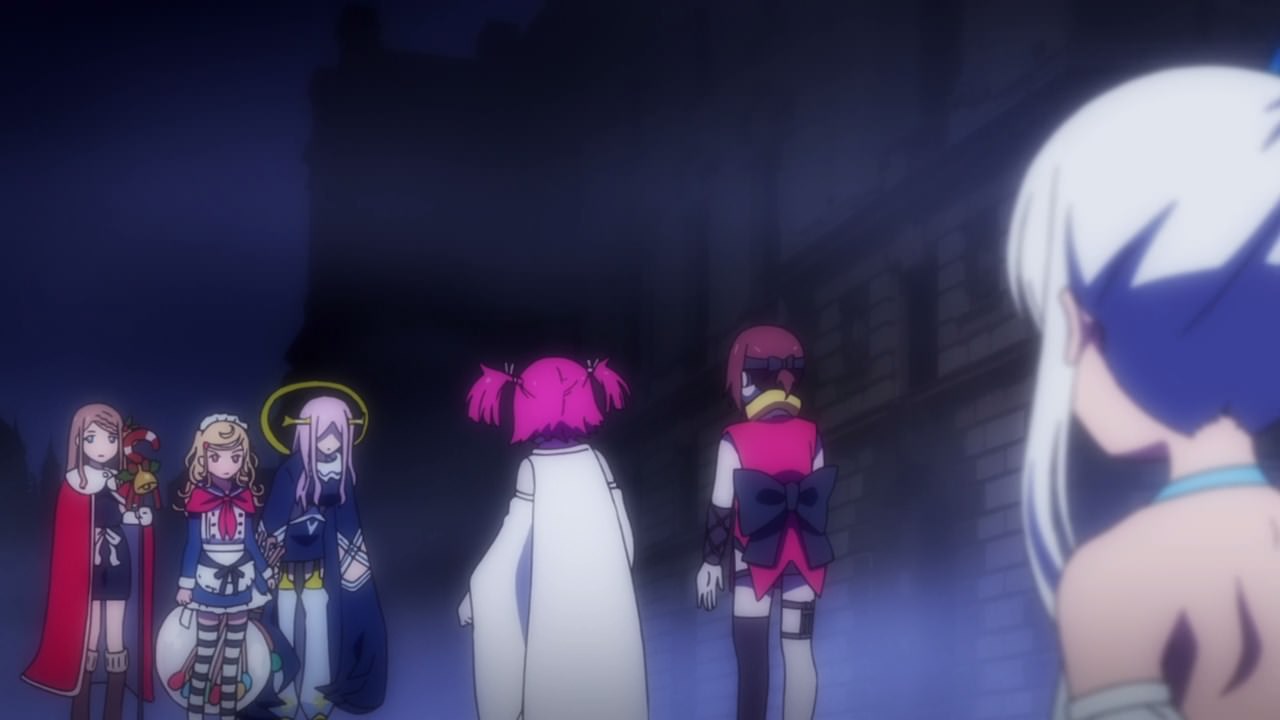 Now let’s go back to the match where Hazuki Kagimura went outside to help both Ariko Kasumi and Sachi Hino. 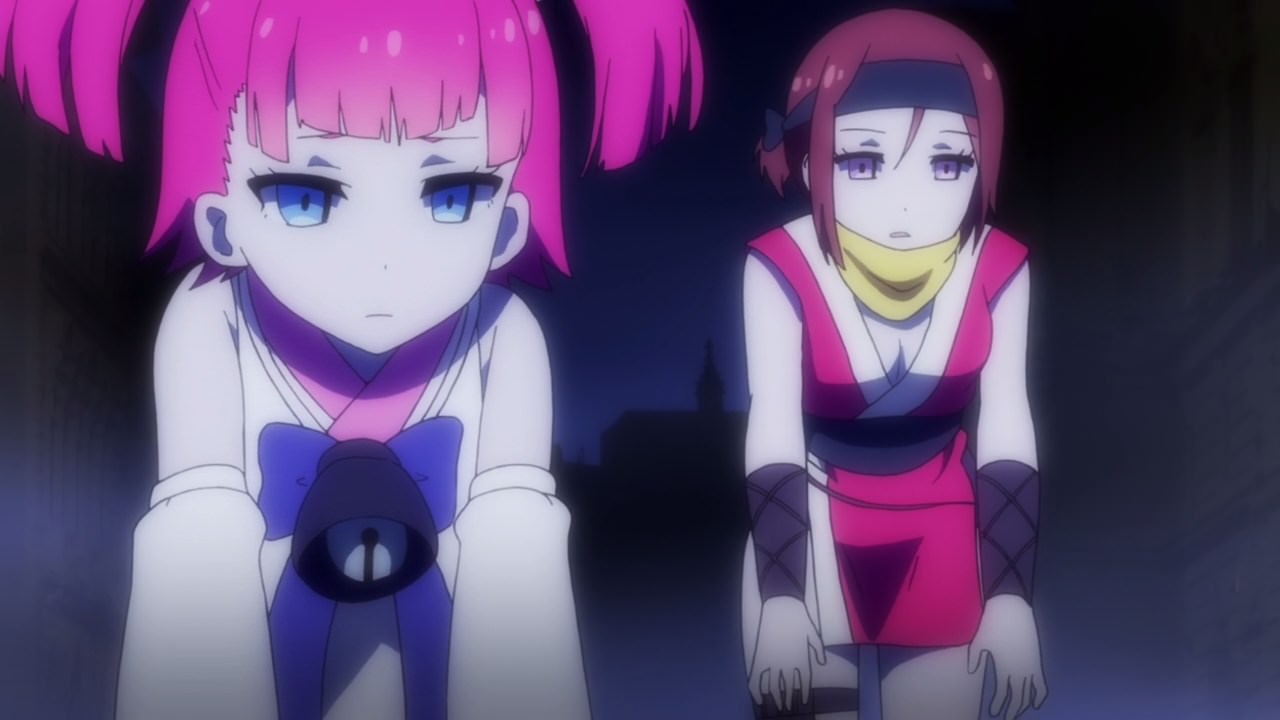 Unfortunately, both of Hazuki’s teammates became zombies thanks to Lucy Burton’s Origin. Ugh, this is a bad situation there! 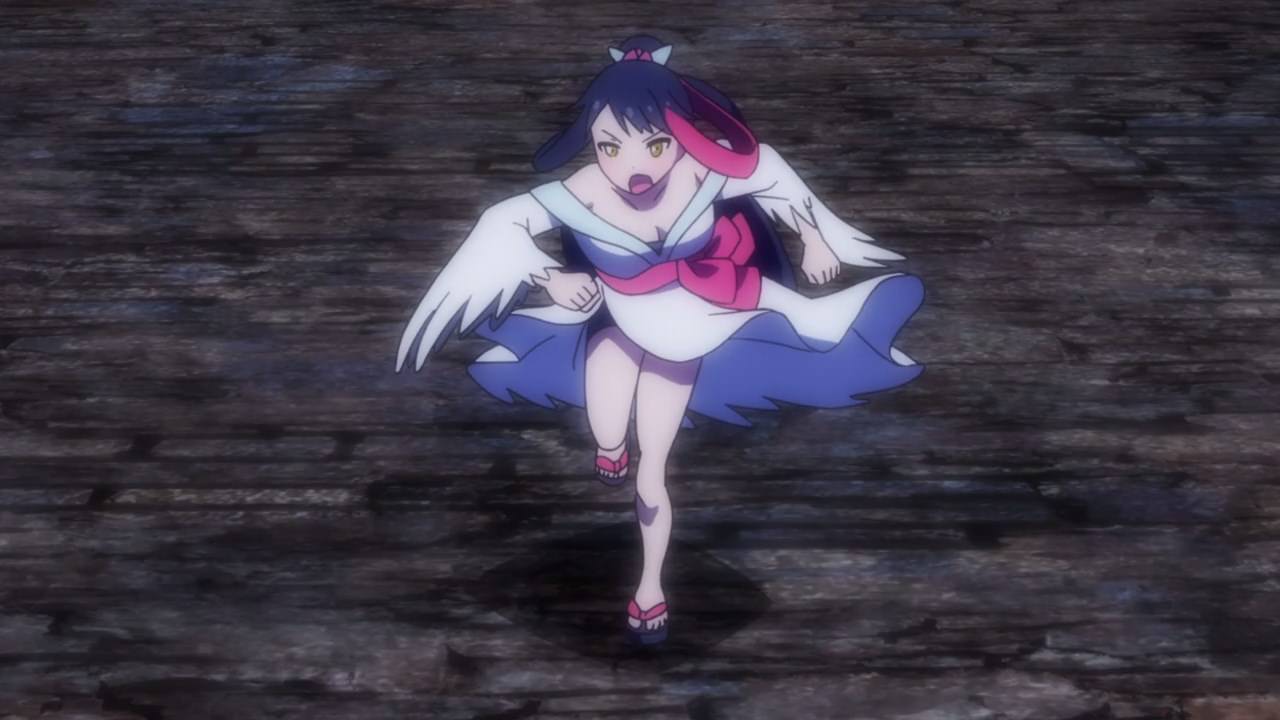 However, Mai Sadohara has decided to take matters into her own hands as she used her surroundings… 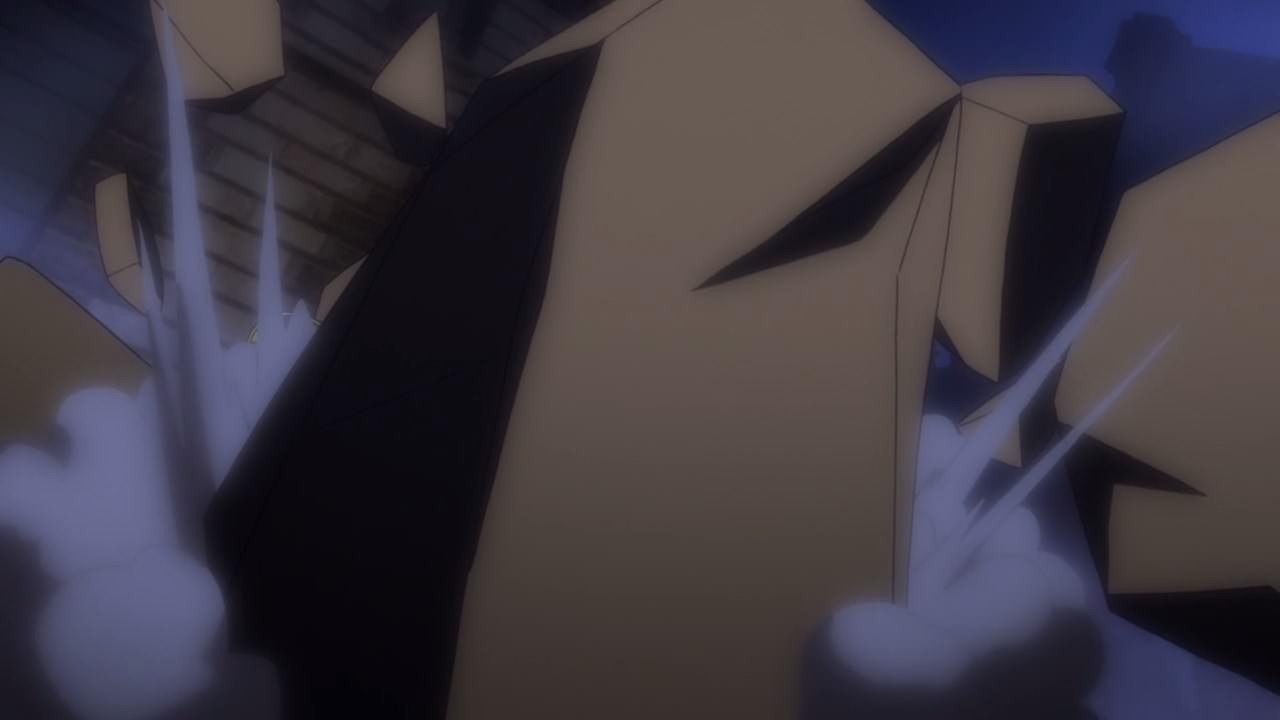 …to topple the whole American team along with Ariko Kasumi and Sachi Hino. Well, that’s the only desperate thing that the Japanese team can do to win. 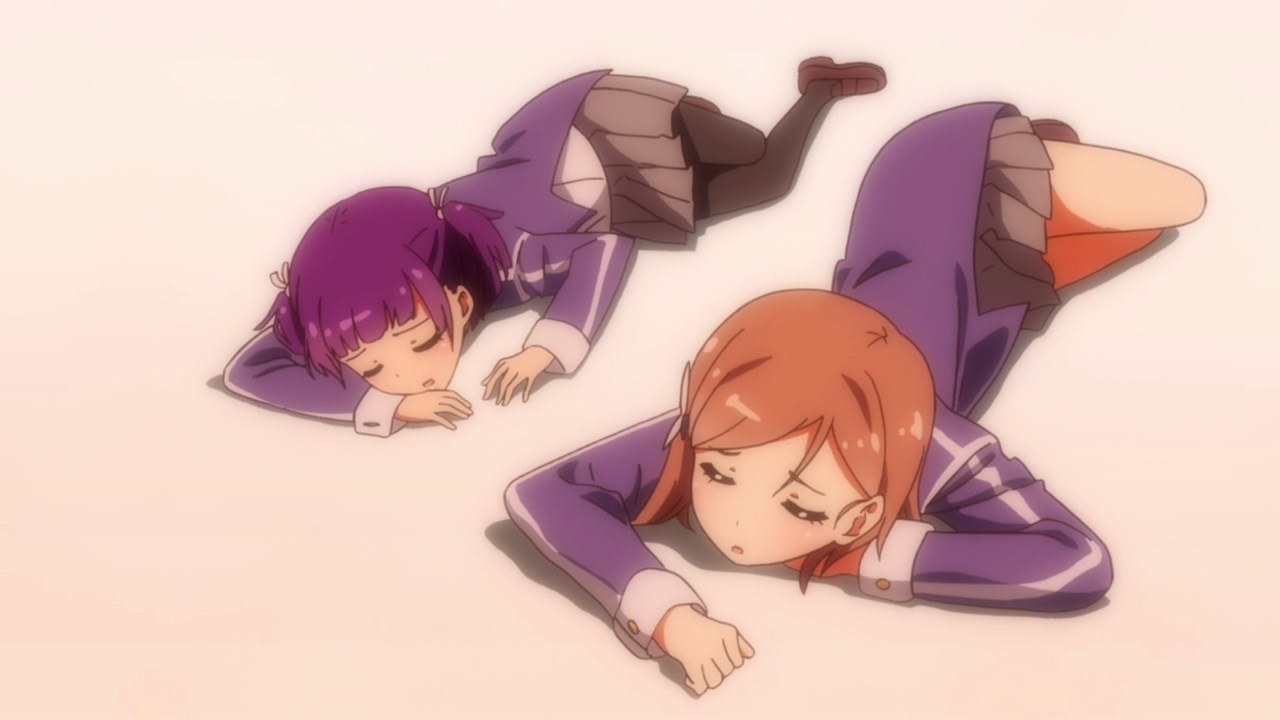 And so, both Ariko Kasumi and Sachi Hino are eliminated and so is Mai Sadohara, which she got caught in her own trap. 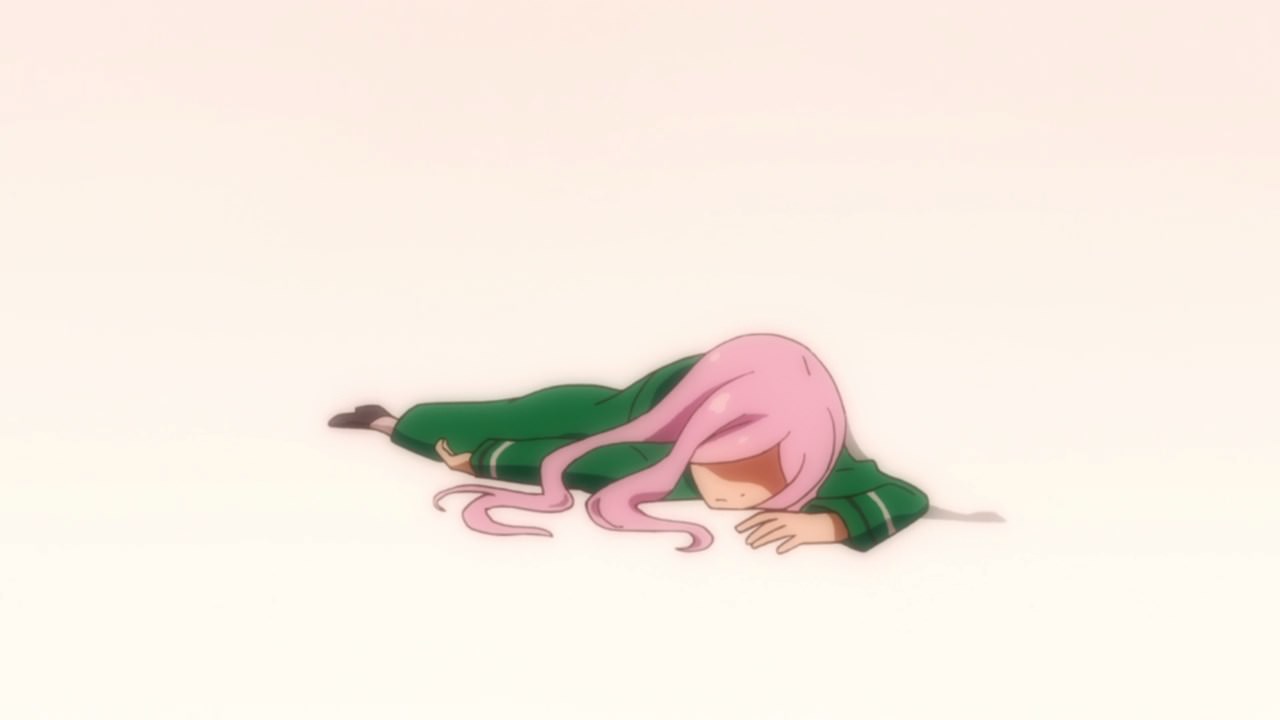 On the other hand, Mai managed to take down Lucy Burton. However, I feel that Hazuki Kagimura will have a hard time beating the Daves sisters by herself. 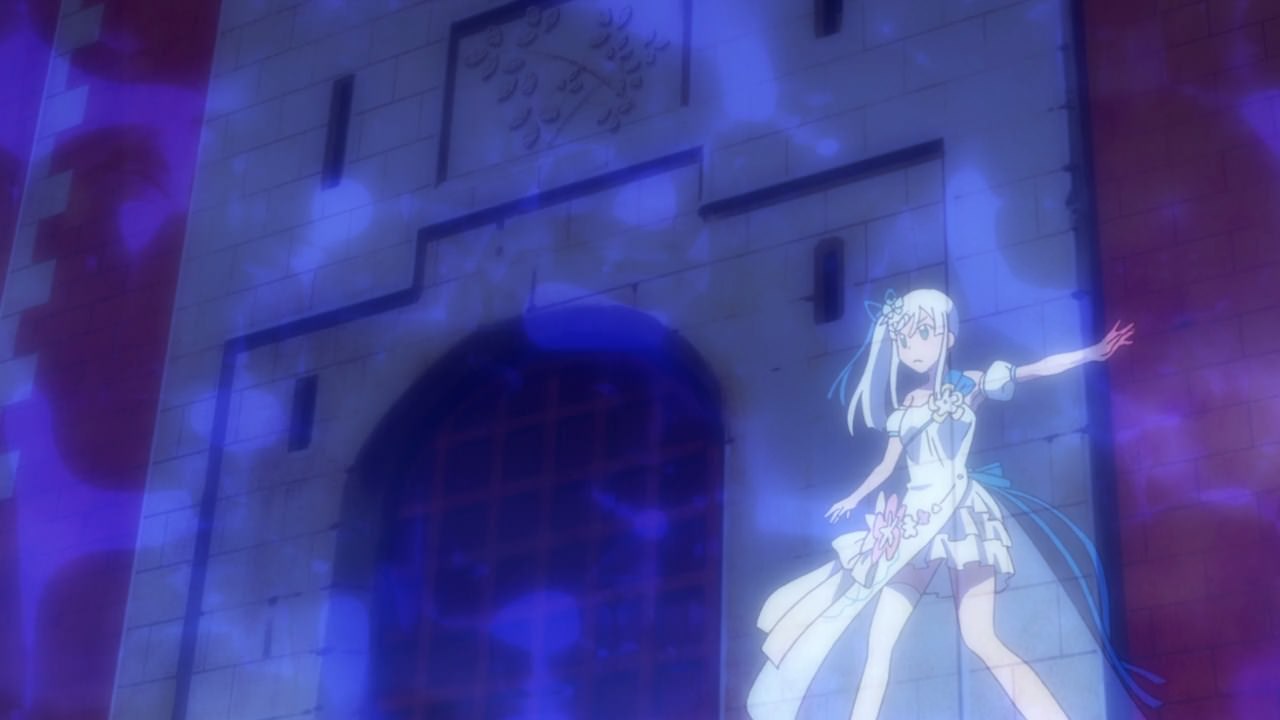 So while she has her Castle to defend herself, Hazuki Kagimura’s Origin won’t last long… 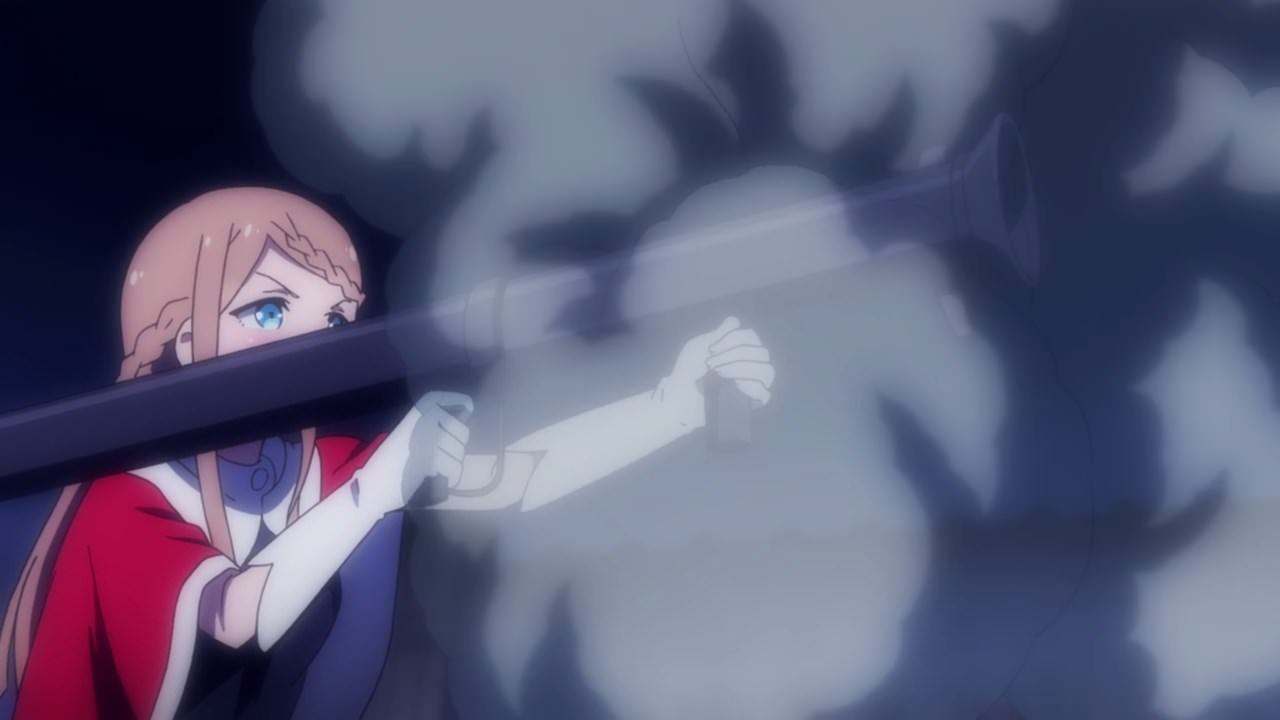 Especially when Angelina Daves pull out a bazooka to fire continuously at Hazuki-chan. 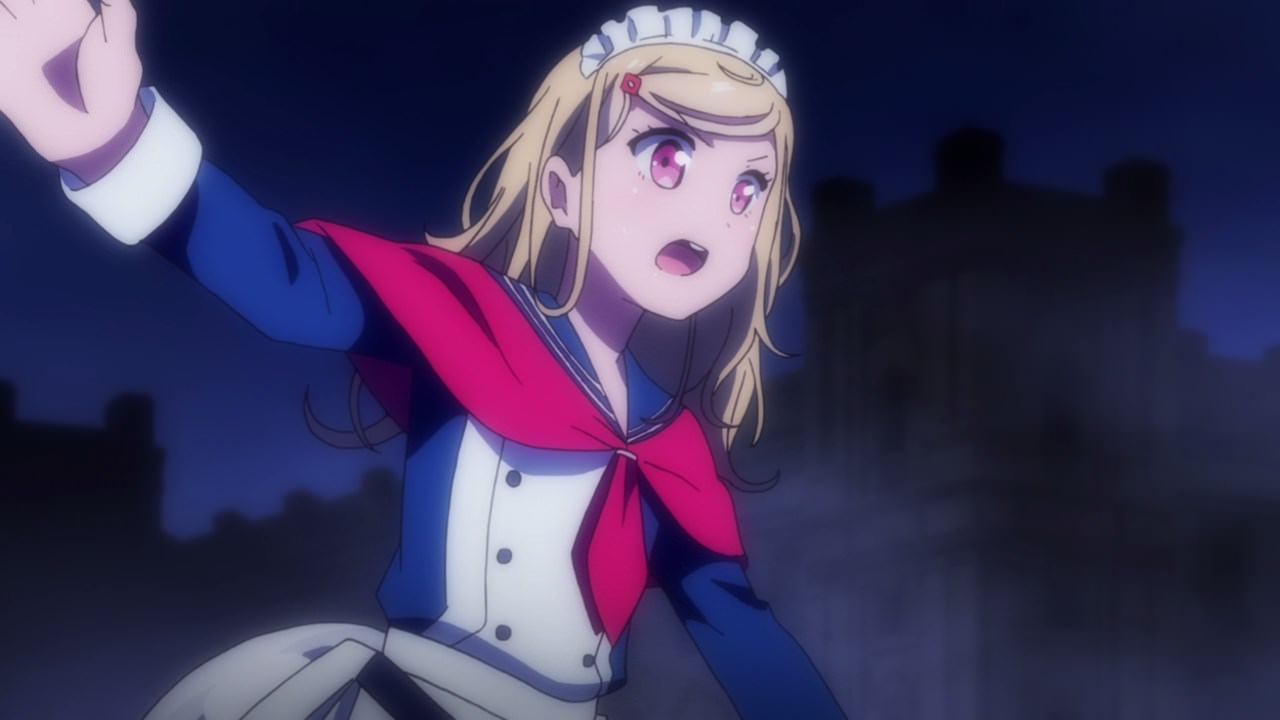 Worst of all, Lynne Daves used all of her matches to summon a familiar that’ll finish Kagimura off. 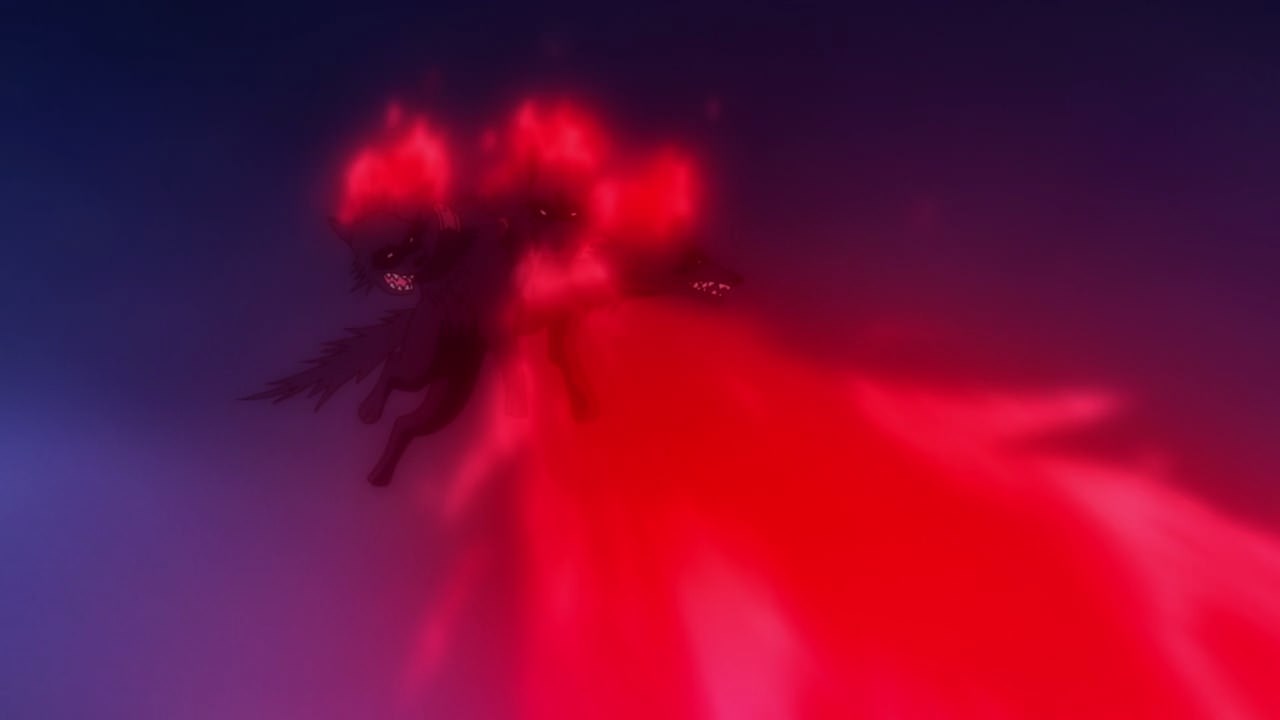 That’s right, it’s a Cerberus and Lynne’s familiar is so nasty that it’s out for Hazuki’s blood.

But you know what, the reason why Lynne wanted to win the Hexennacht so badly, even as far as cheating her way to victory, is because she was molested by priests at the orphanage. Ugh, I can’t stomach the fact that there’s sexual abuse on this episode. It’s no wonder why Lynne is so messed up! 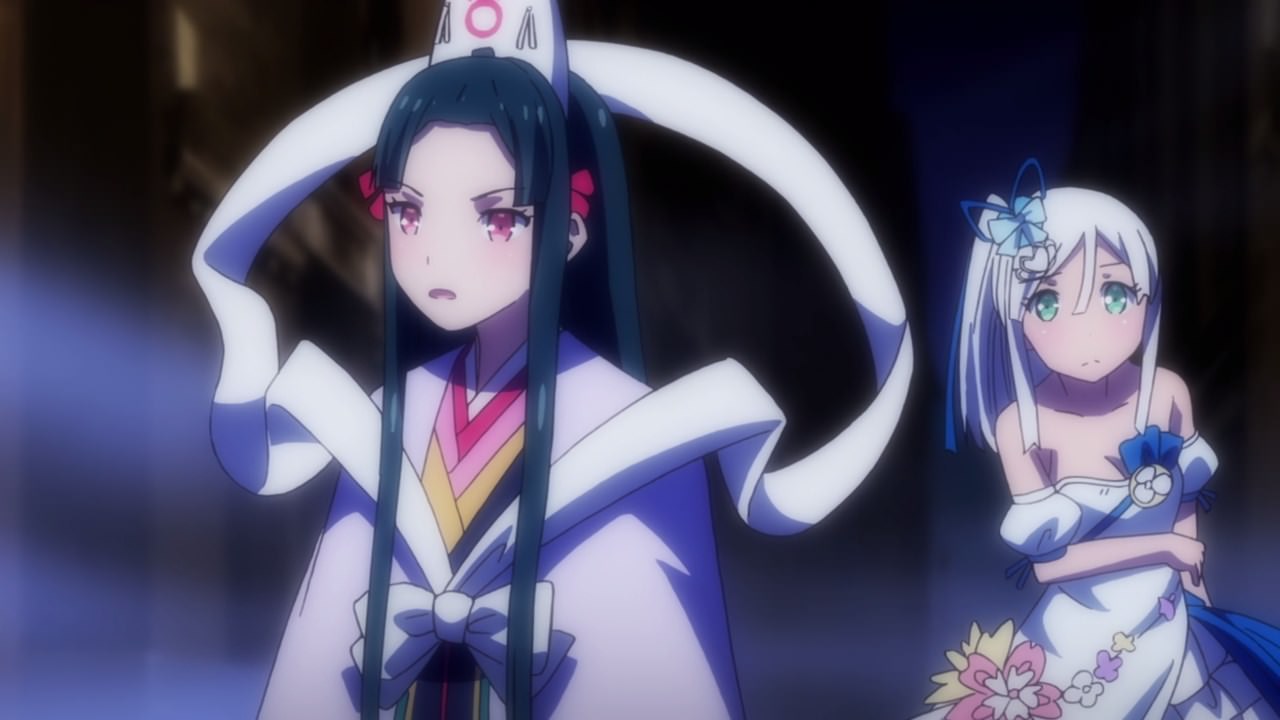 Fortunately for Hazuki Kagimura, it appears that Shizuka Tsuchimikado has arrived with her Origin intact.

Looks like the Committee just gave into Shizuka’s forceful demands instead of sticking their guns on keeping it until the tournament is over. 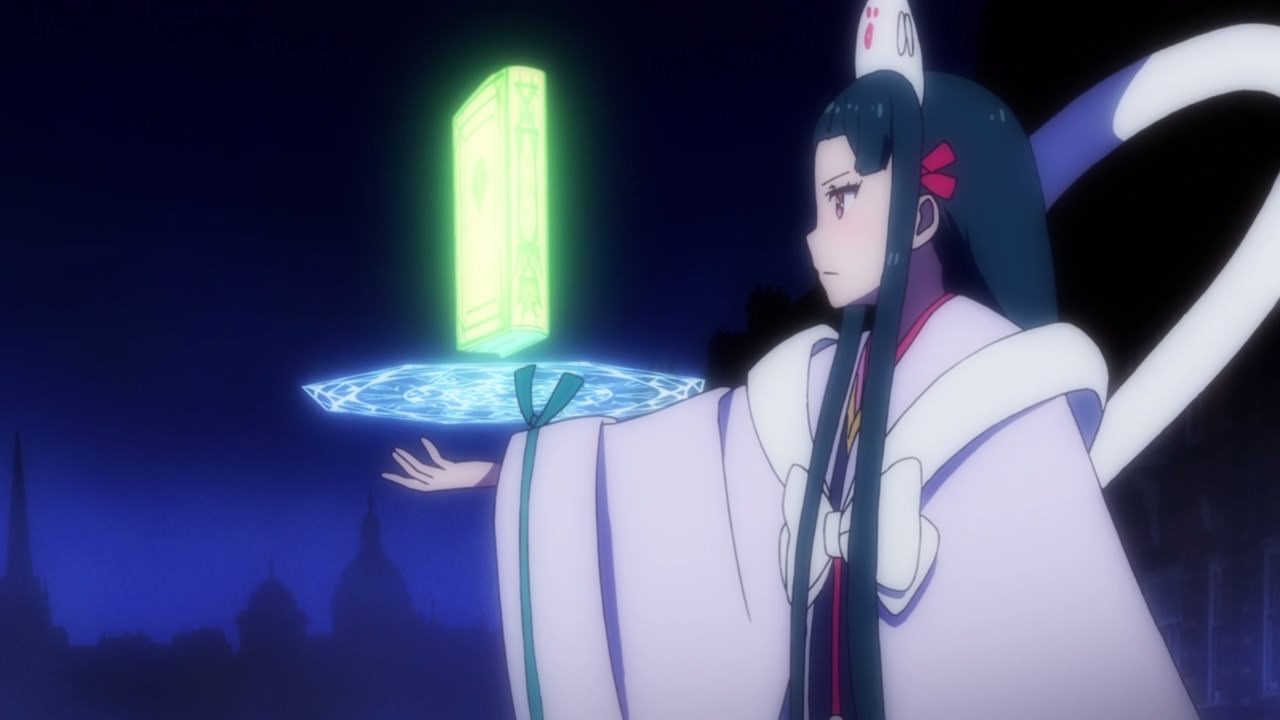 And speaking of Shizuka Tsuchimikado, looks like she decides to take a page from Kagimura’s playbook as she modifies the story of Kaguya-hime. And what those modifications be if you may ask? 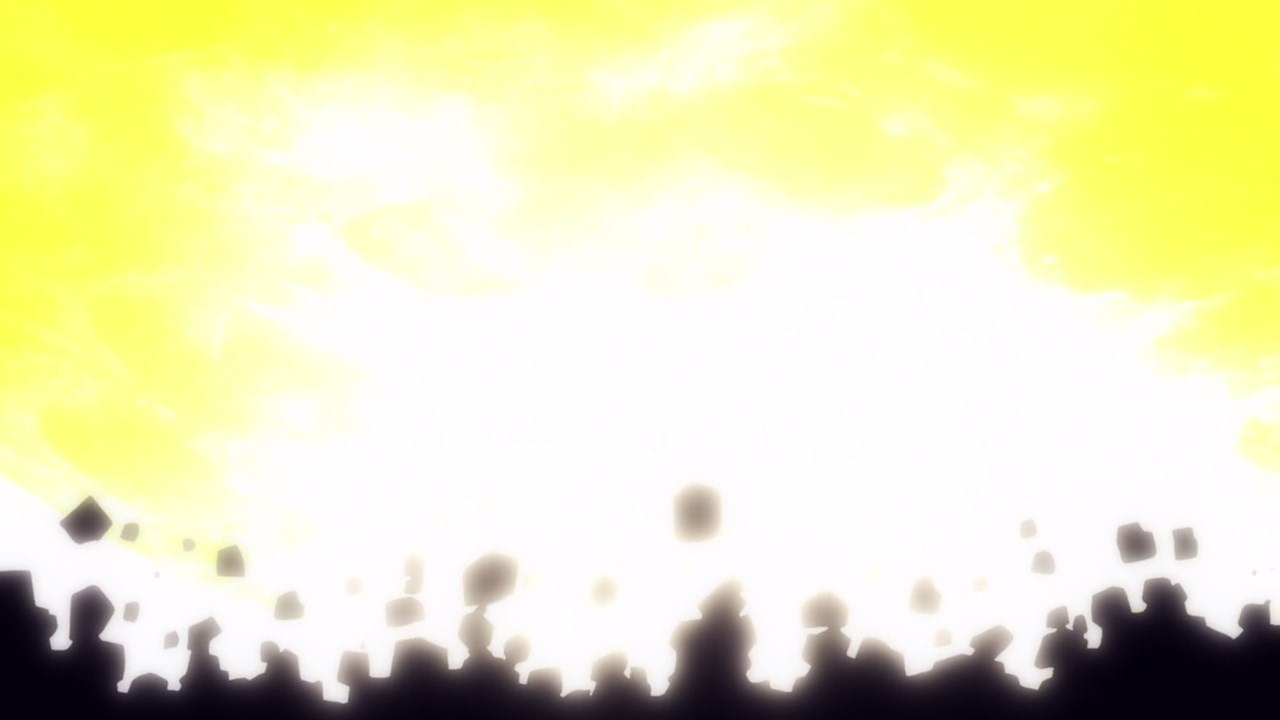 Well, she decides to bring the moon closer to Earth instead of flying away like in the original story.

But you know what, dropping a moon towards the surface is like the opening scene from Mobile Suit Gundam, and it seems that the Daves sisters got caught with it. 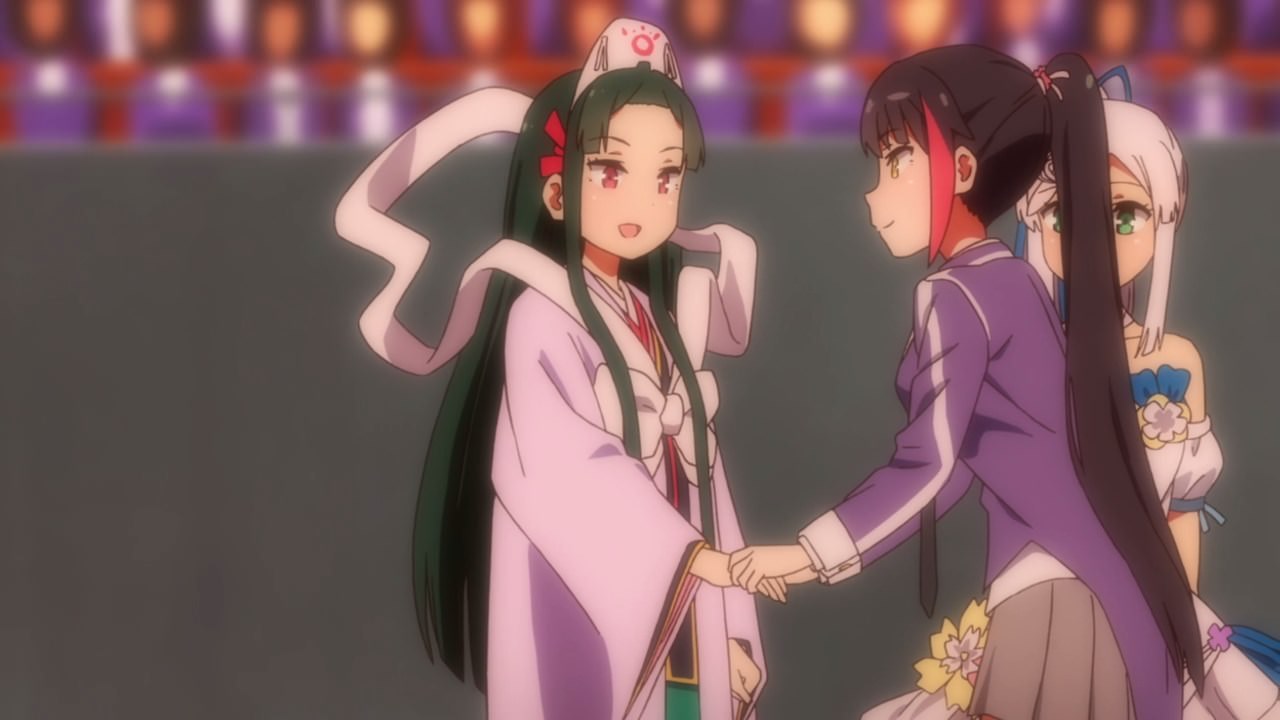 Thanks to Shizuka Tsuchimikado’s intrusion, Team Japan will move to the finals to face Team Germany. Well, glad that Shizuka is back with her Origin at hand! 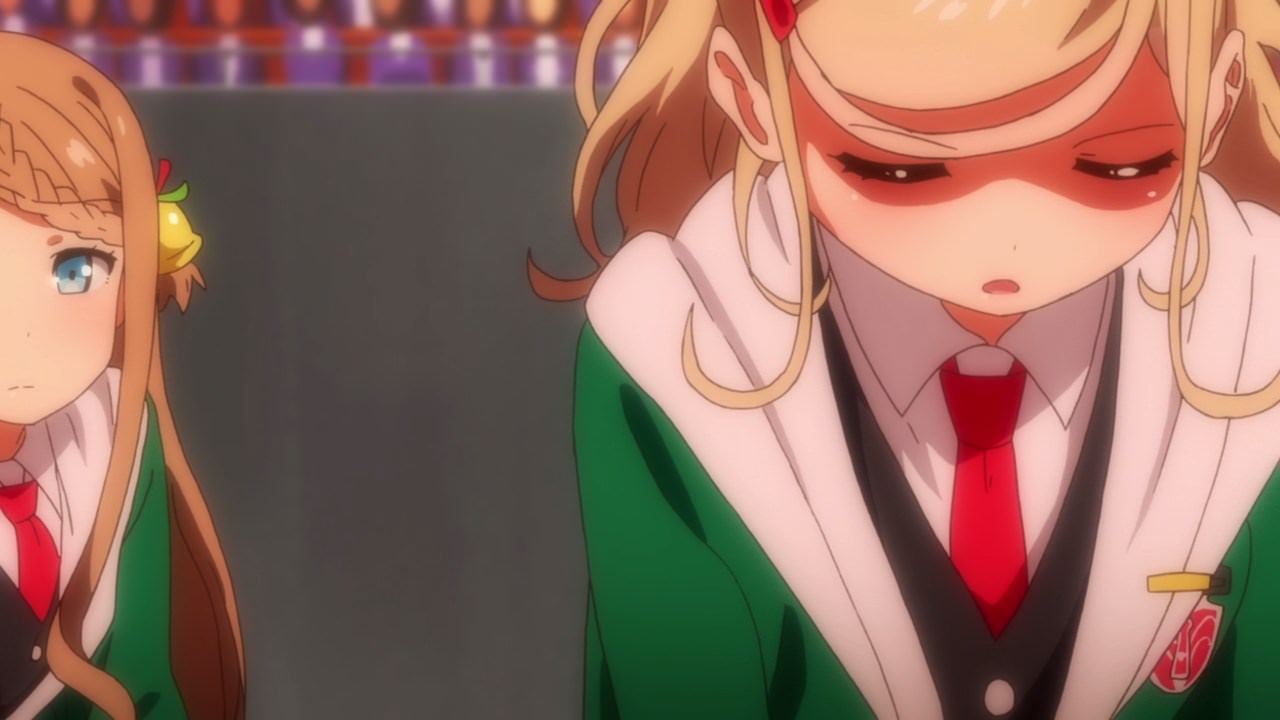 But for Team America, especially Lynne Daves, they’re in a state of denial that they lost to a weak team. Then again, Lynne is mostly affected and I must say that cheaters don’t prosper.

Oh yeah, about her adoptive father James Daves? I doubt that he truly loves his daughters because James is using them to bolster influence towards the Committee. 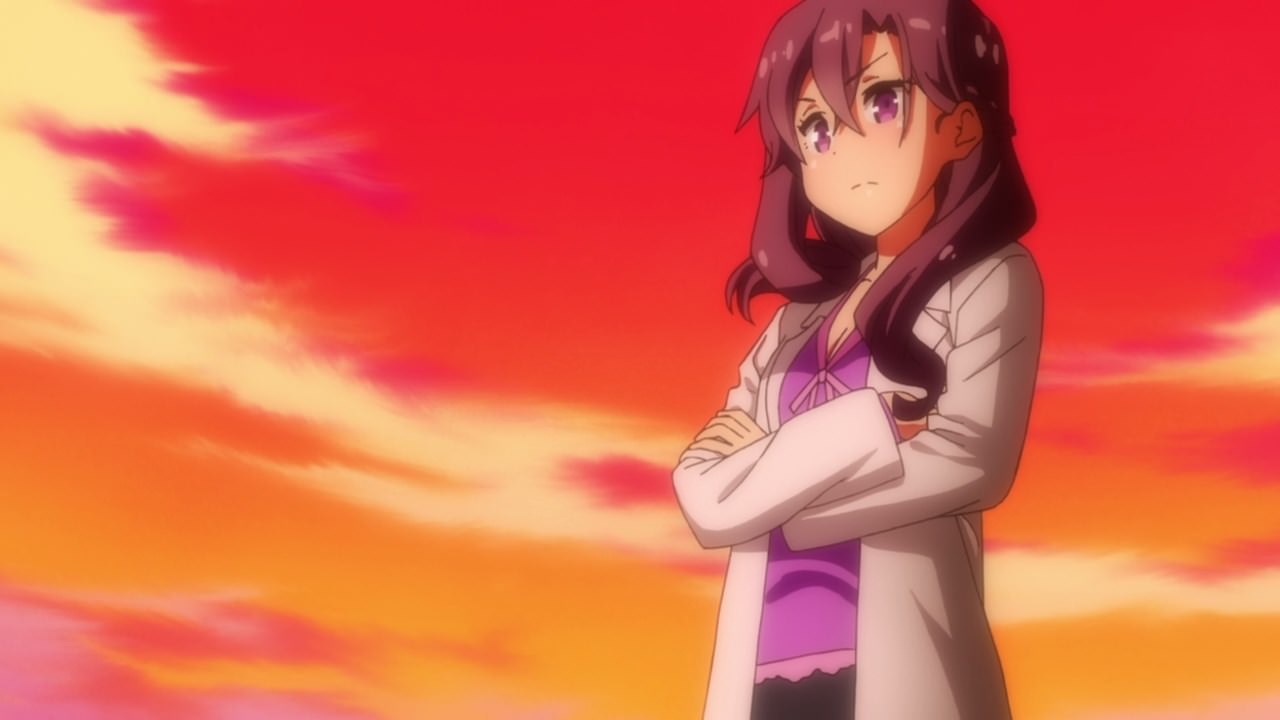 Then again, Principal Sugami suspects that the Committee would simply cut James Daves off just to save their reputation. But even though they wash their hands off from the Daves family, the Committee is full of shitty people!

And that’s about it for this TV run of Märchen Mädchen as the series will be in hiatus indefinitely until Hoods Entertainment announced the final 2 episodes, which I’ve doubt that it’ll happen anytime soon. But you know what, I feel that Märchen Mädchen has an interesting story but I don’t like some aspects of this show like shady practices within the Committee and goddamn cheaters like Lynne Daves. But, the only thing that held Märchen Mädchen back is the abysmal production that the studio took a two-week break. And yet, they didn’t improve until this episode.

So with that said, it seems that Märchen Mädchen will wrap it up in an unforeseeable future. Then again, I fear that they might cancel the show!