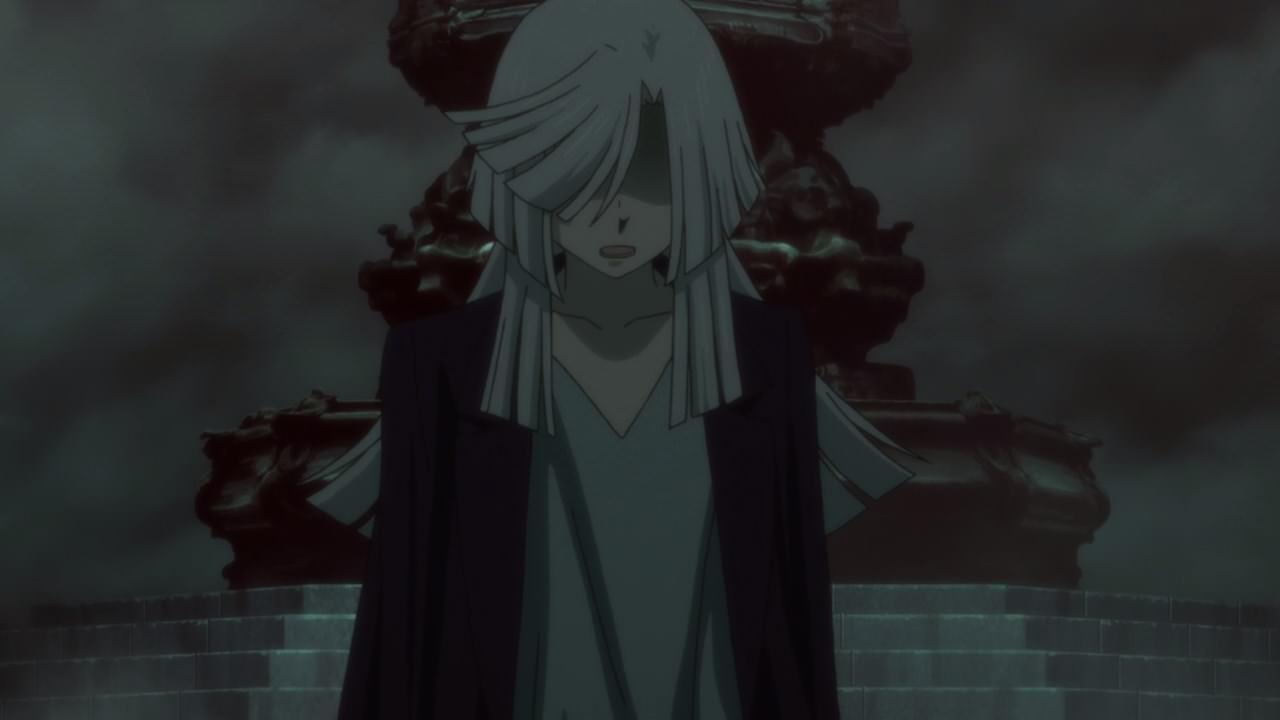 Kept you waiting for this finale of The Ancient Magus’ Bride, huh? Well then, seems that Chise Hatori has managed to find Cartaphilus or Joseph and as you can see, he still hates her guts.

I mean, Chise suffered a lot due to her status as a Sleigh Beggy, yet she got a family to return to whereas Cartaphilus/Joseph was not welcomed by everyone during his lifetime, which he felt bitter about it! 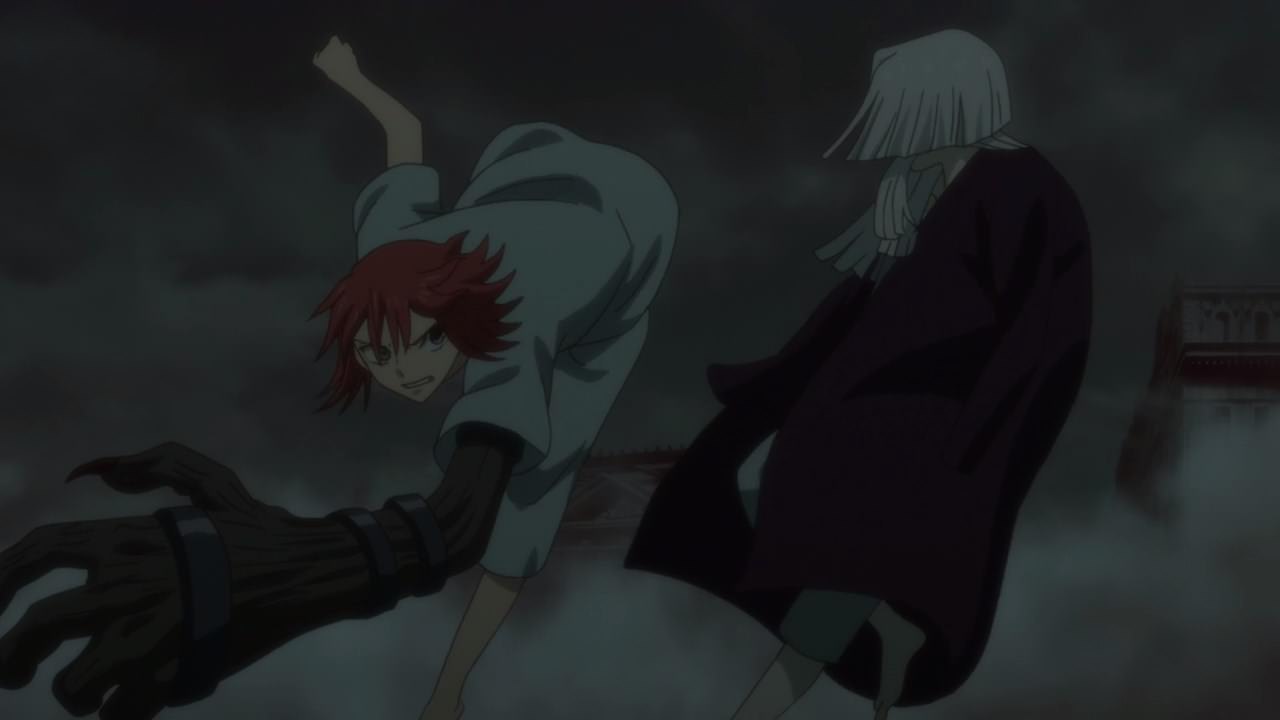 Nevertheless, Chise Hatori wants to beat the shit out of Cartaphilus/Joseph for all the horrible things that he did throughout the entire series. After all, she’s very angry at him! 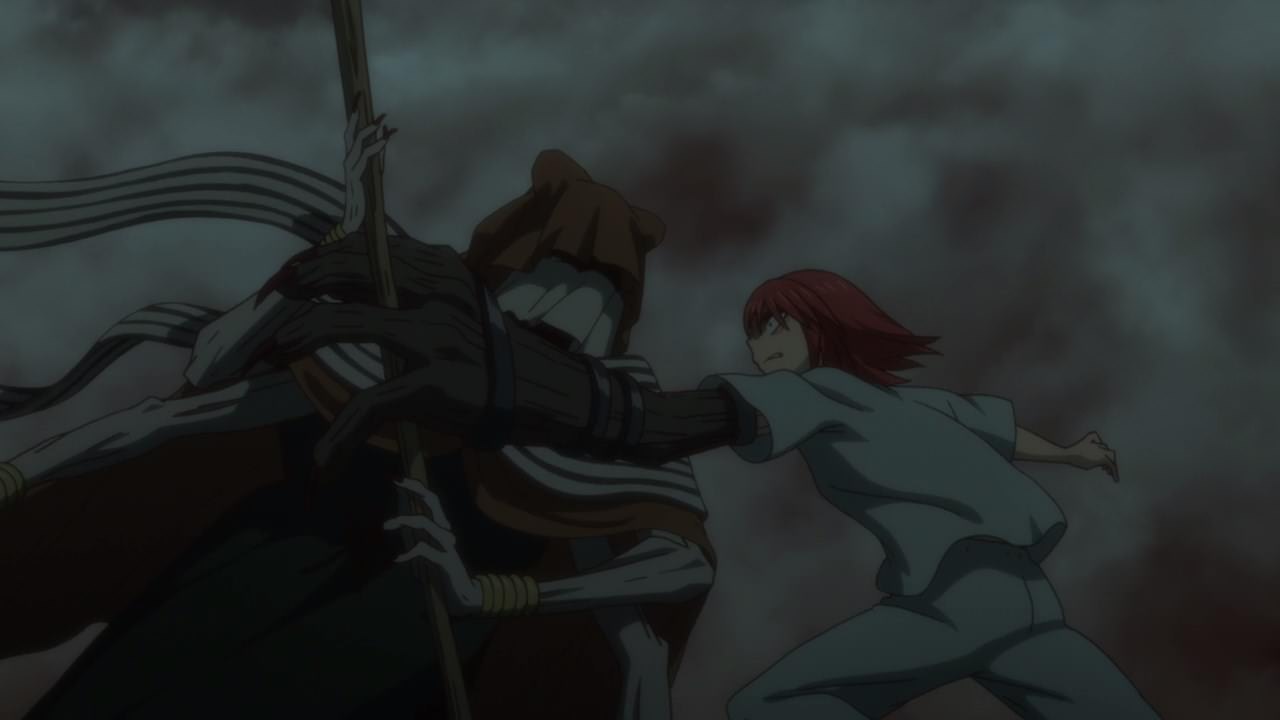 Unfortunately, seems that the Ashen Eye is here to play and ruin Chise’s day. Seriously, this guy is a pain in the ass! 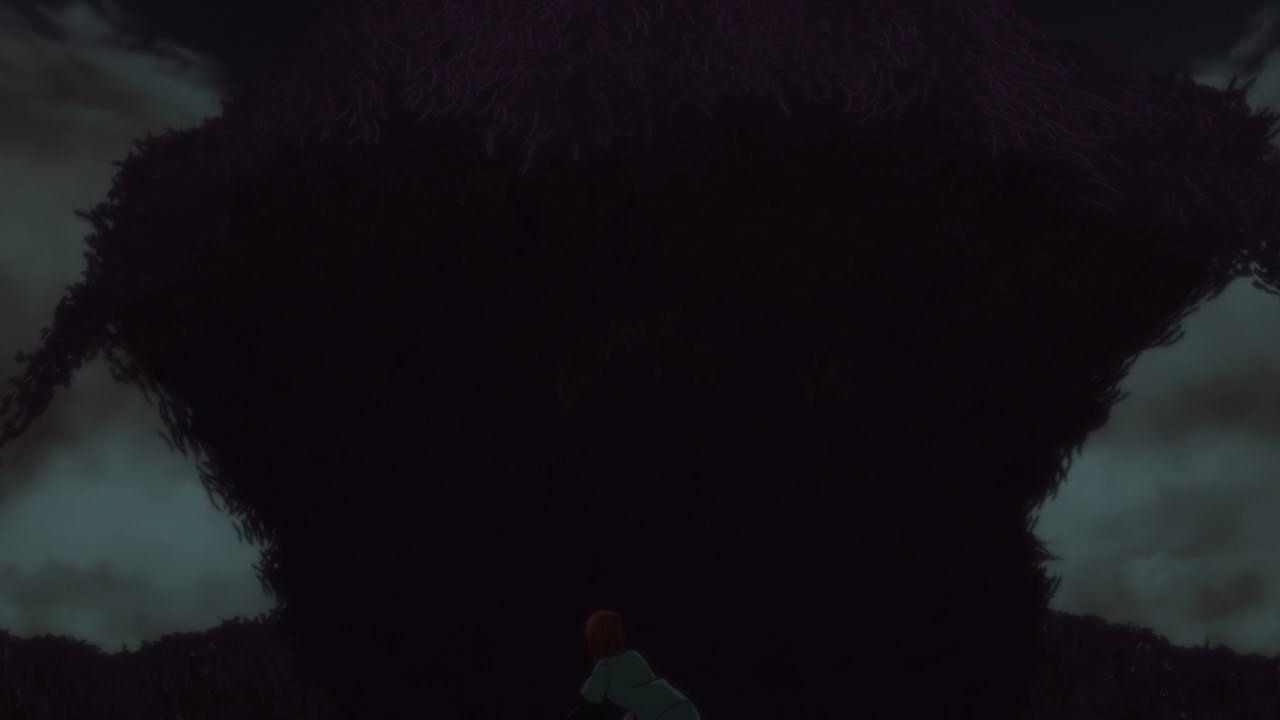 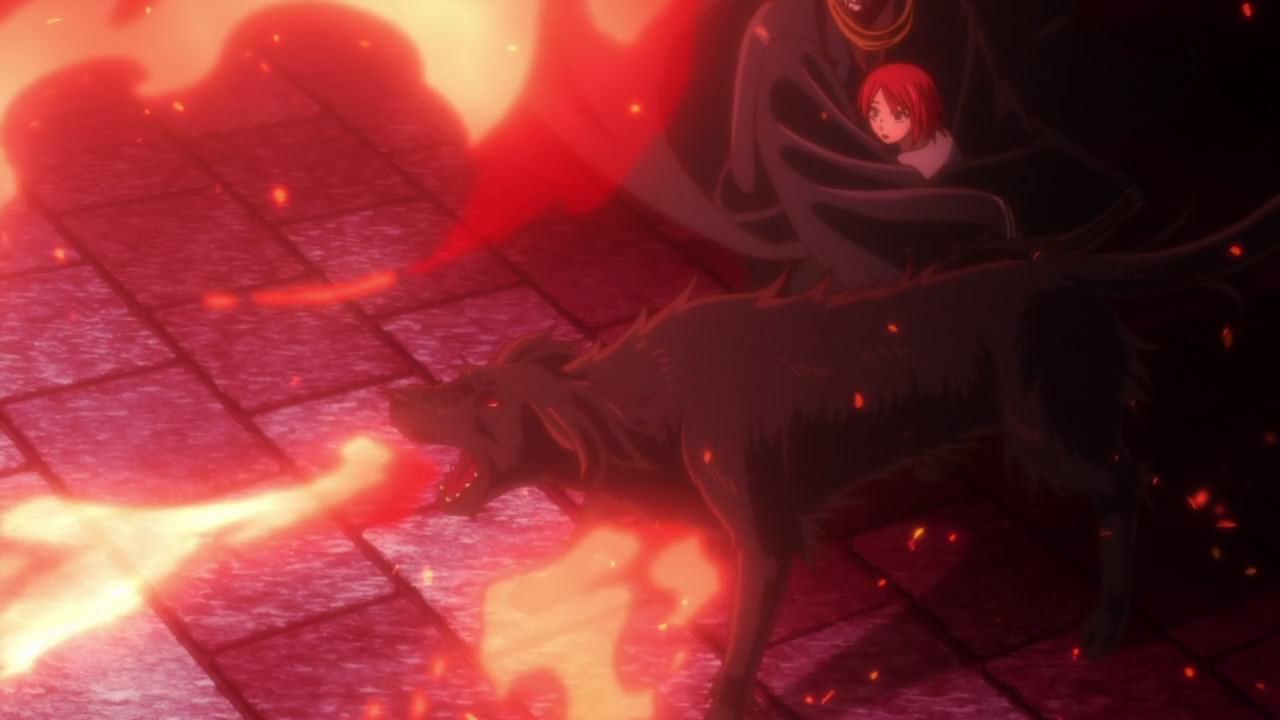 Luckily for Chise, Ruth and Elias Ainsworth came to the rescue to fend off these creepy crawlies off. Glad that they arrived to stop both Cartaphilus/Joseph and the Ashen Eye. 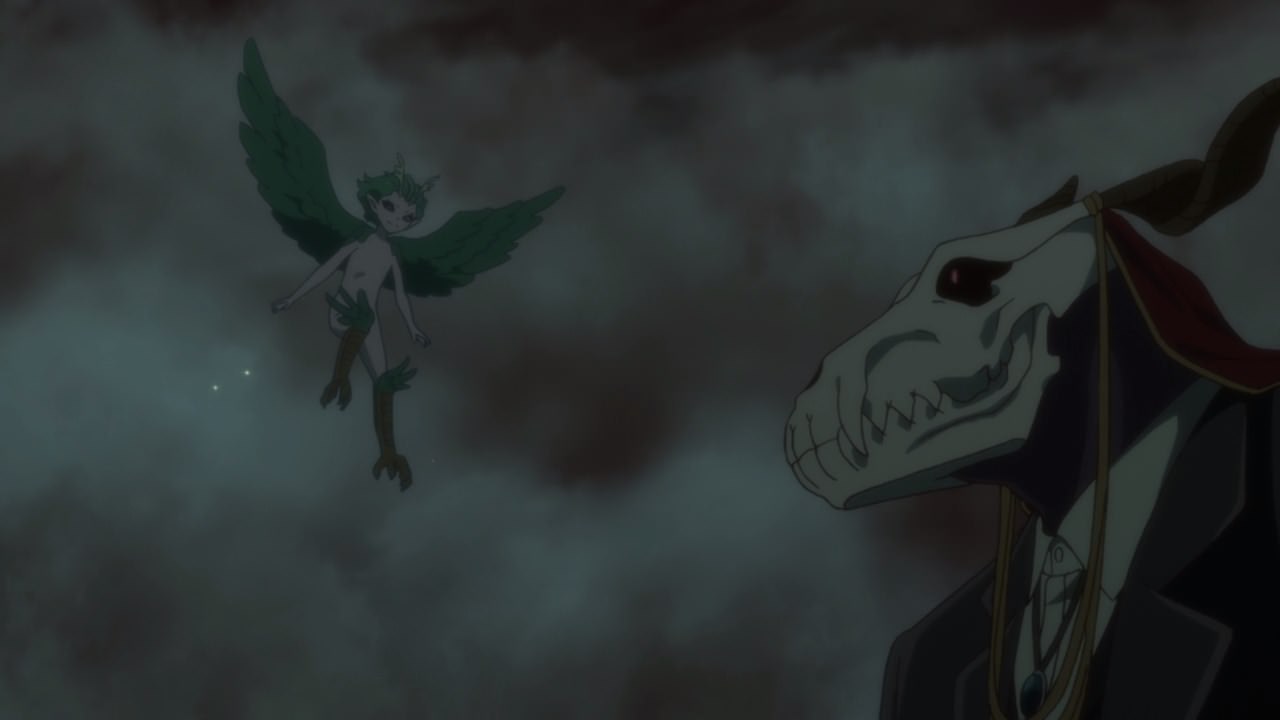 Speaking of Elias Ainsworth, looks like he’ll get some help from an ariel despite being called a failure of a fairy. And what powers might this ariel have if she joined forces with the Thorn Mage? 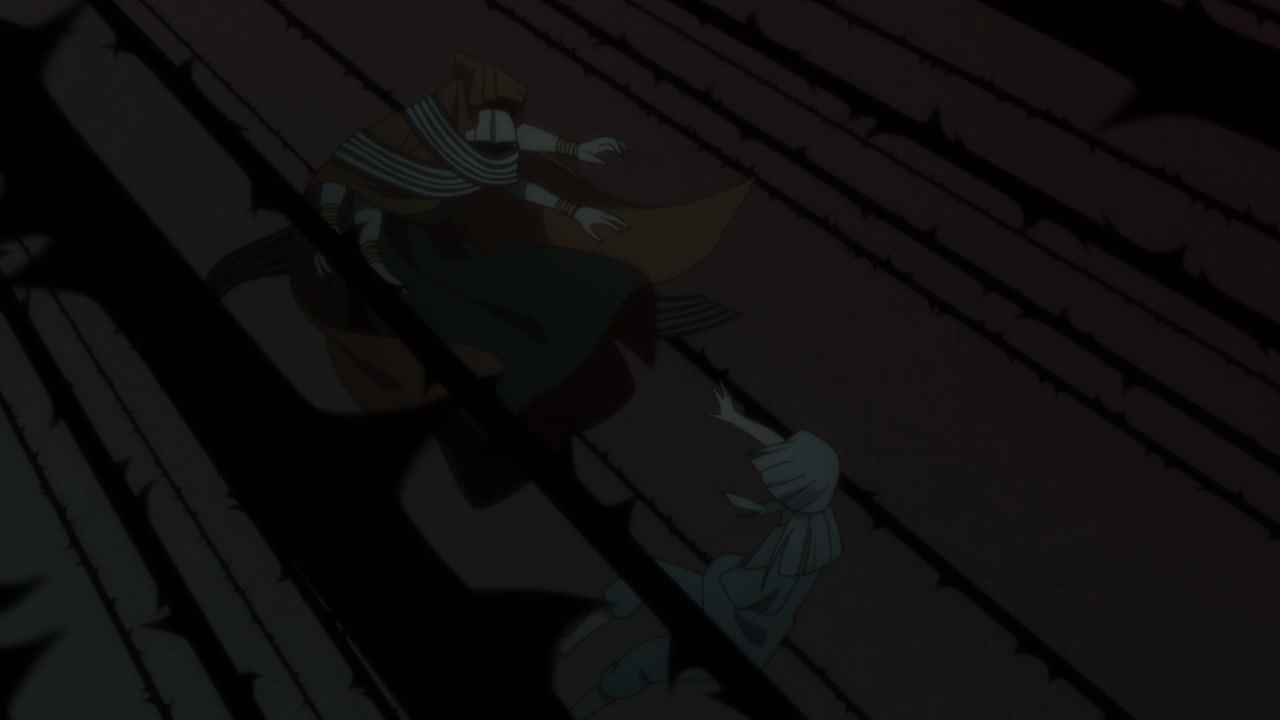 Well, Elias’ magic powers become stronger as he can summon a plethora of vines at the Ashen Eye. 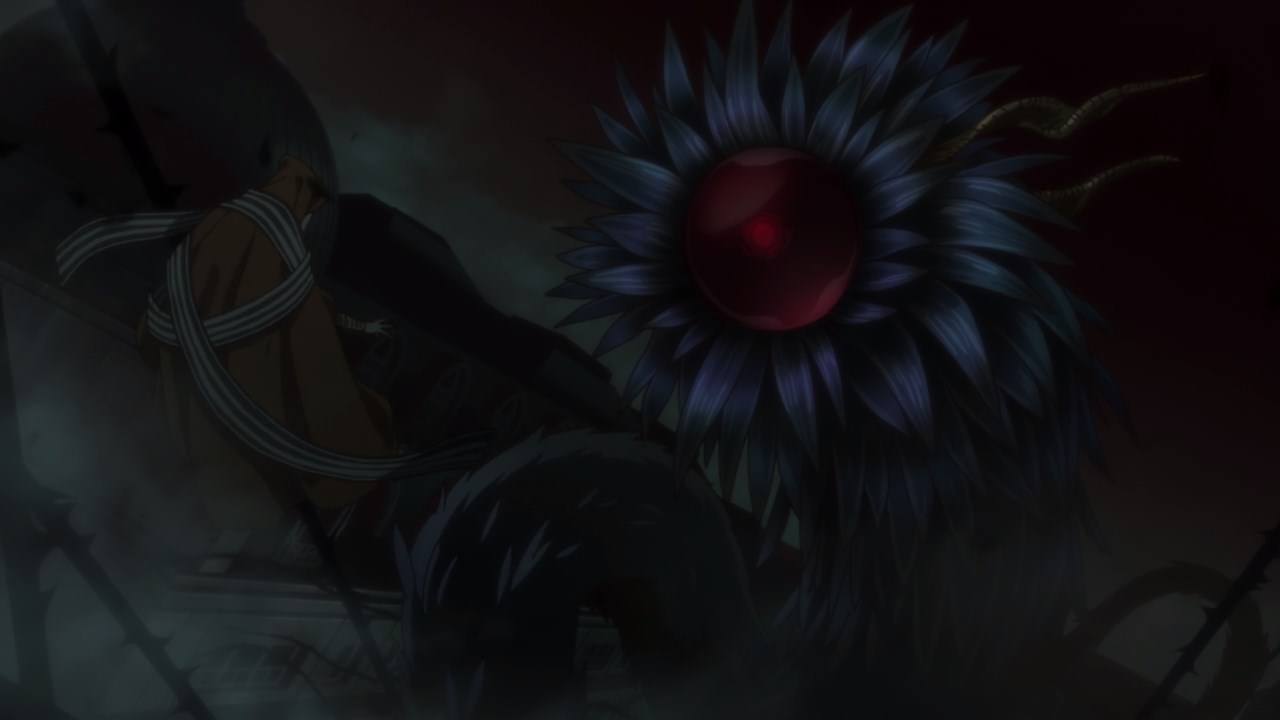 Oh, and the Thorn Mage transformed into some sore of a giant flower that might eat the Ashen Eye should its mouth opened. 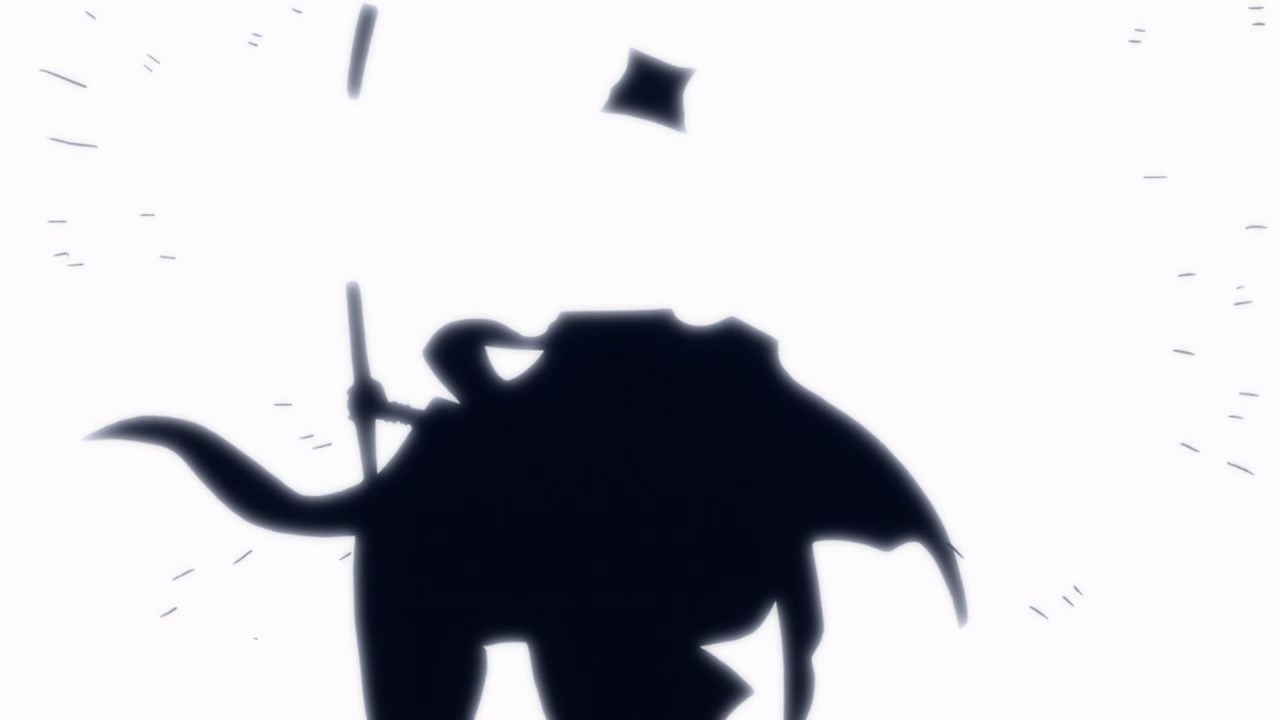 However, Elias opt to cut the Ashen Eye’s head off instead of eating this bastard of a mage. But hey, at least the Ashen Eye got what he deserved! 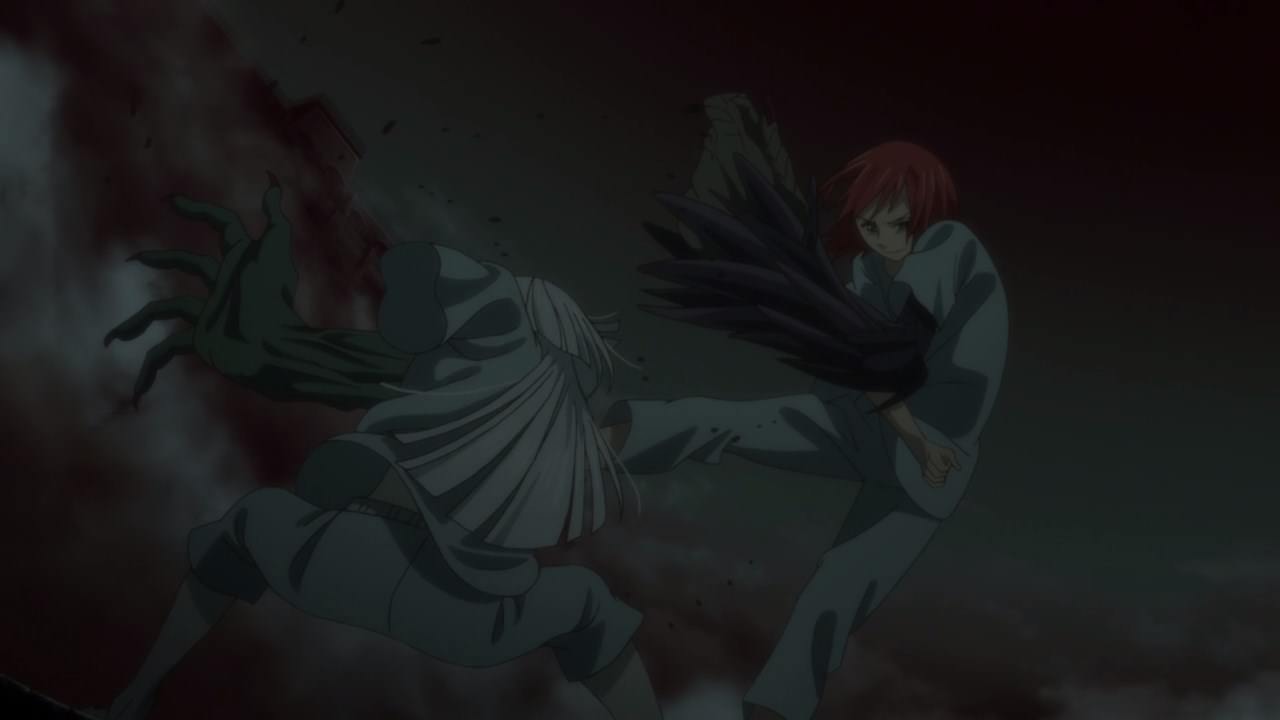 Now that the Ashen Eye got his head cut off, it’s time to stop Cartaphilus/Joseph as Chise grab him to the ground. 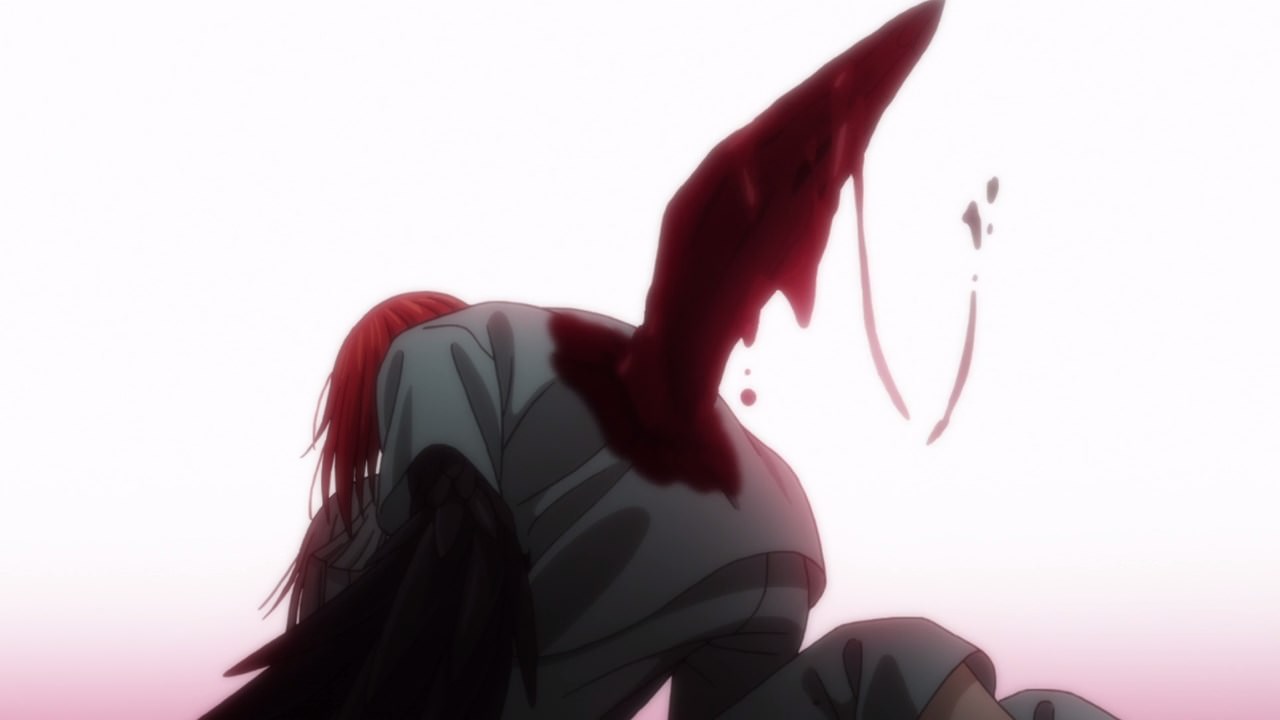 However, Cartaphilus/Joseph has some other plans as he impale Chise Hatori with a vine. Ugh, I can’t bear to watch Chise die like this. 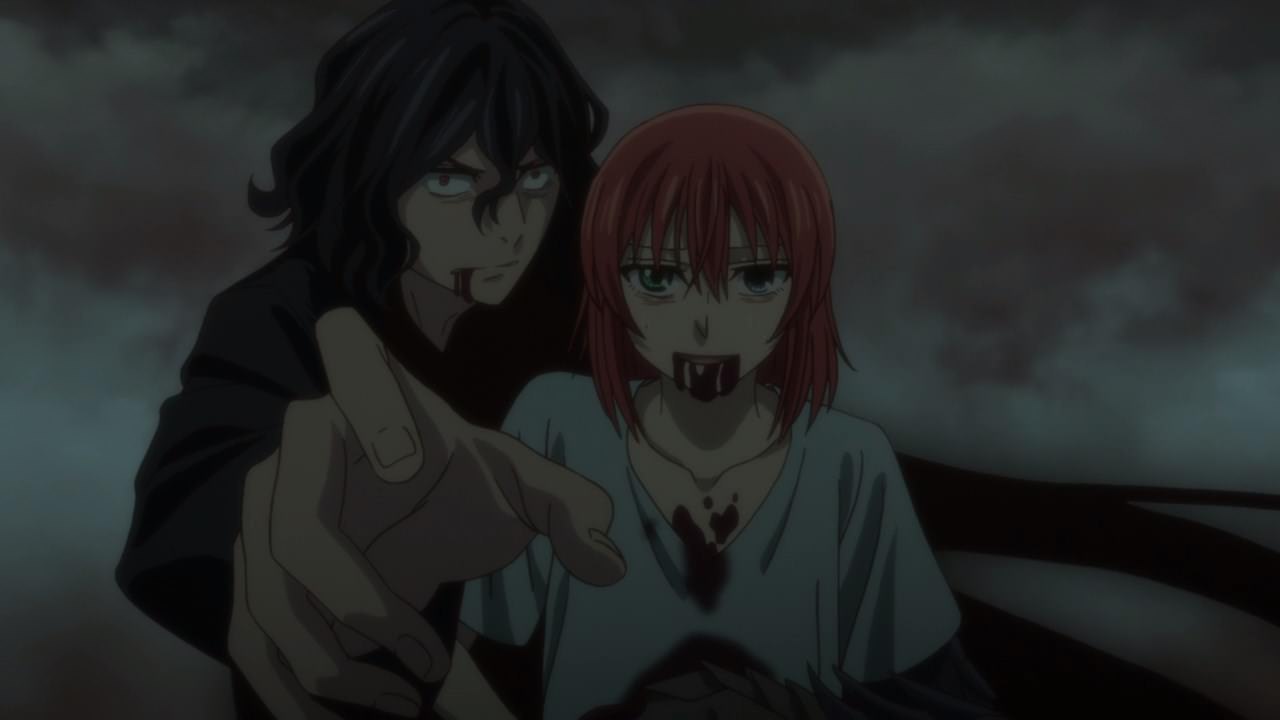 But, that’s what she’s aiming for as Chise used this opportunity to take down Cartaphilus/Joseph with the help of Ruth. And what will Chise’s familiar do towards Joseph? 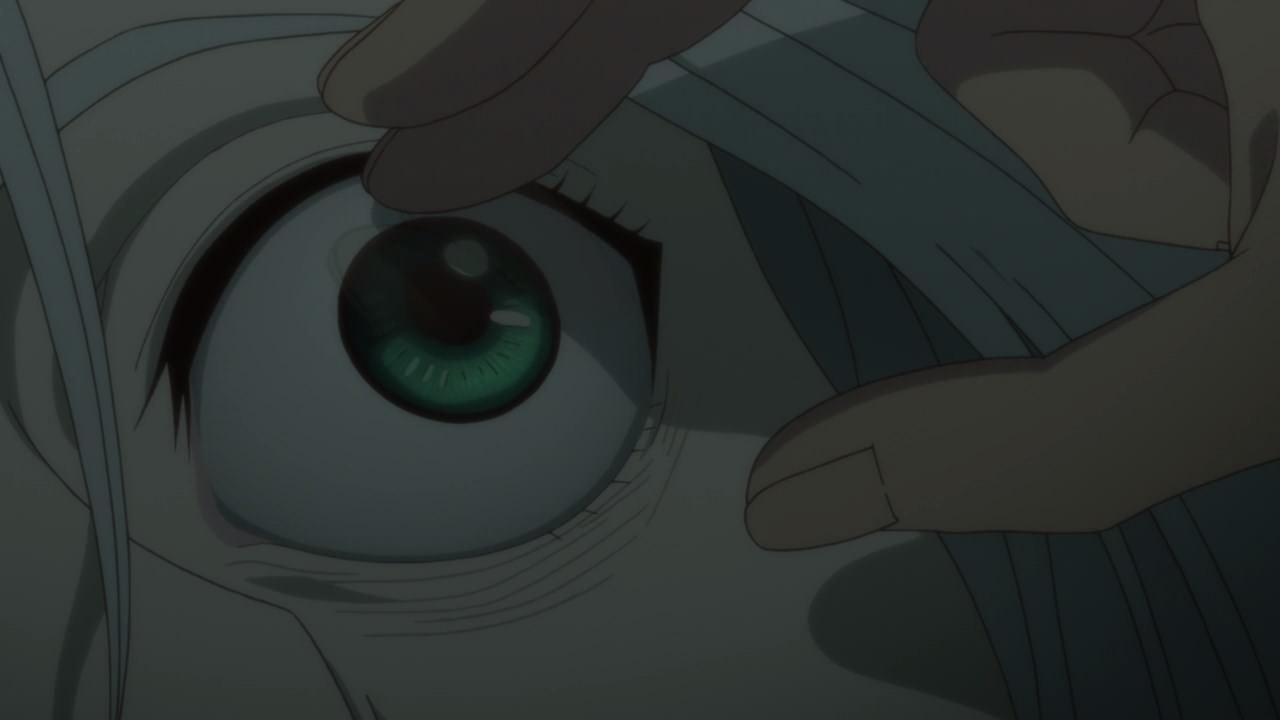 Well, Ruth will pull one of Joseph’s eyes out. Oh yeah, and he’s aiming at his left which originally belonged to Chise Hatori. 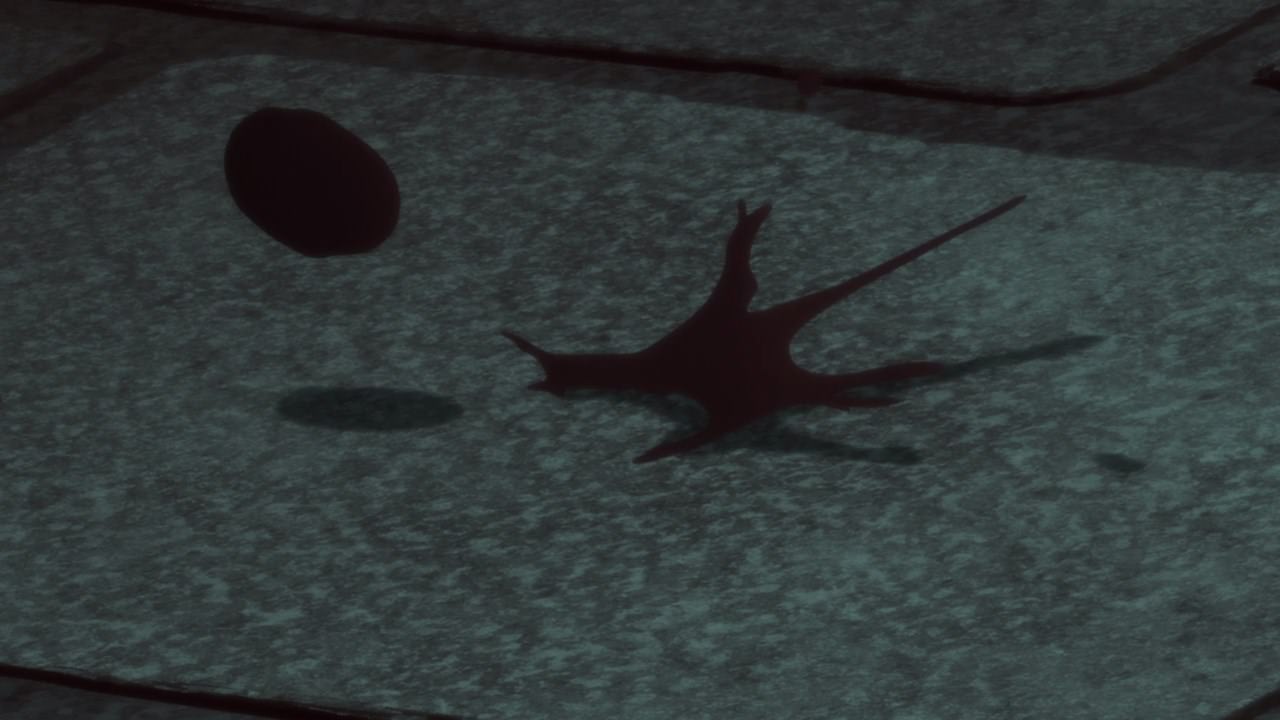 But as you can see, Ruth gutted out Joseph’s left eye in a snap. After all, it originally belonged to her. 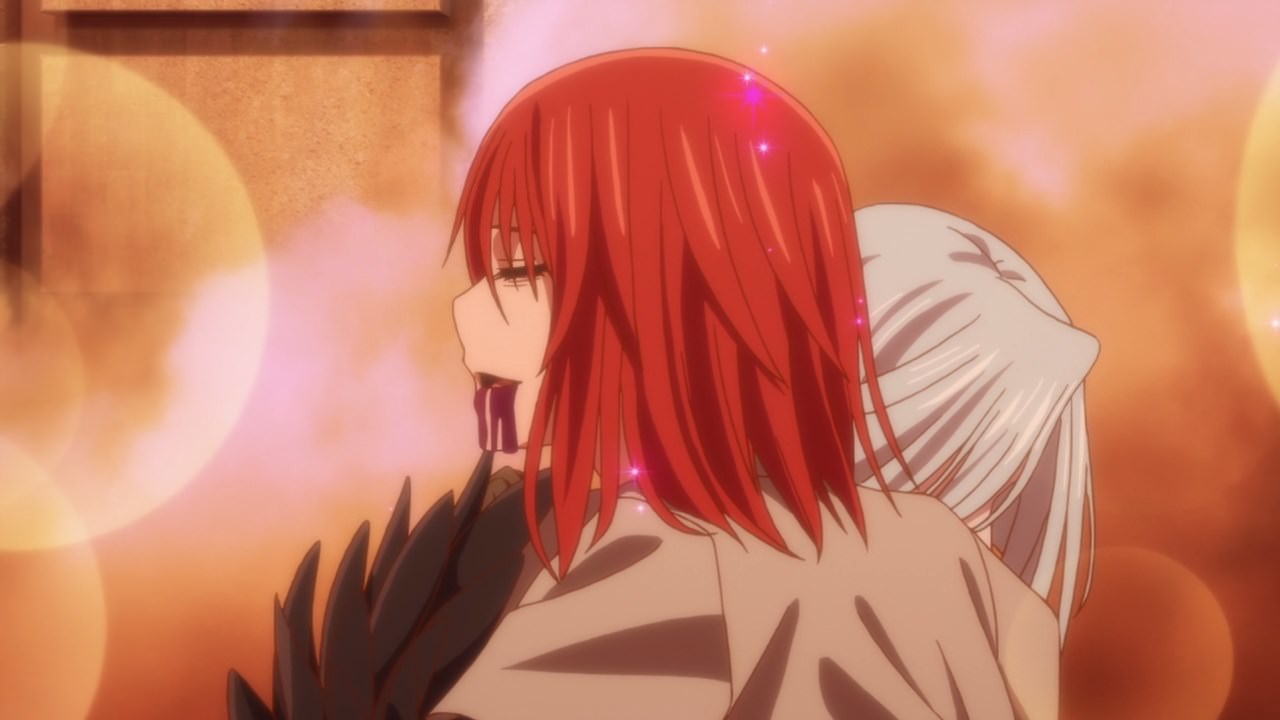 While she wanted to kill him off, let’s not forget that Joseph has Cartaphilus inside of him and he can’t die no matter how hard she try. 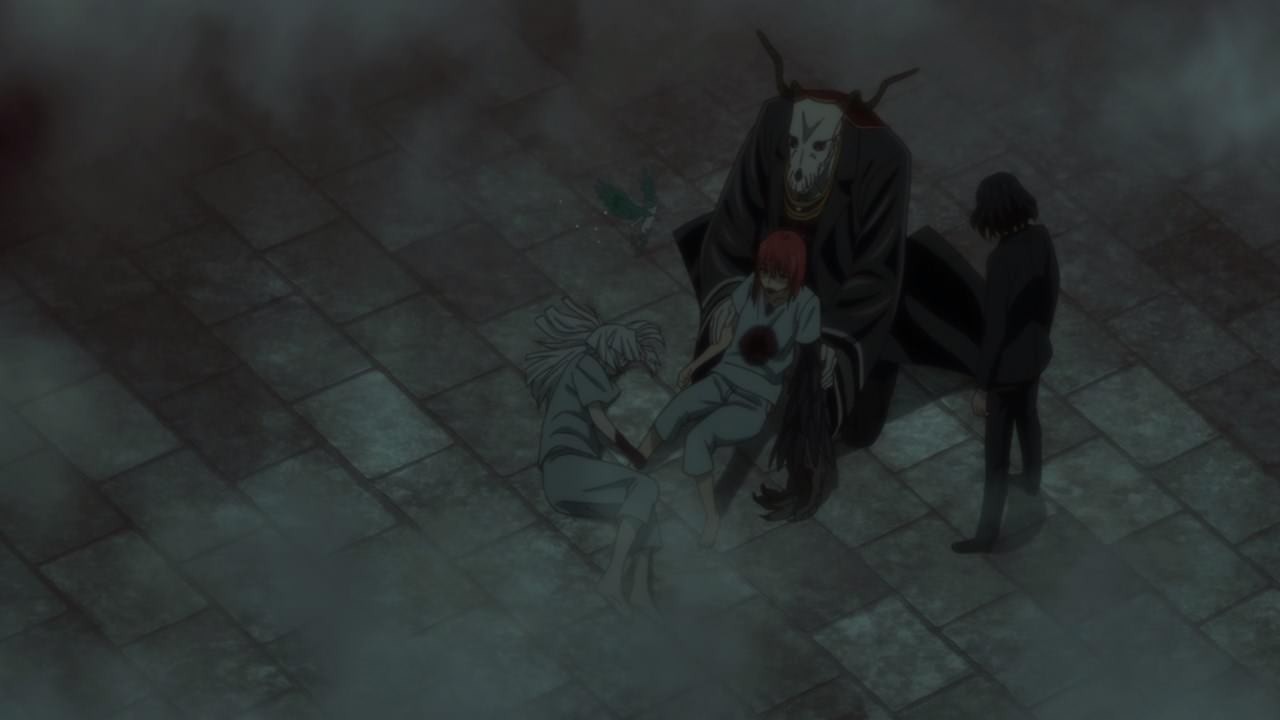 But her lullaby is enough for Joseph as he went into a deep slumber. And with that, it’s all over as Chise Hatori has defeated Joseph despite her grave injuries. 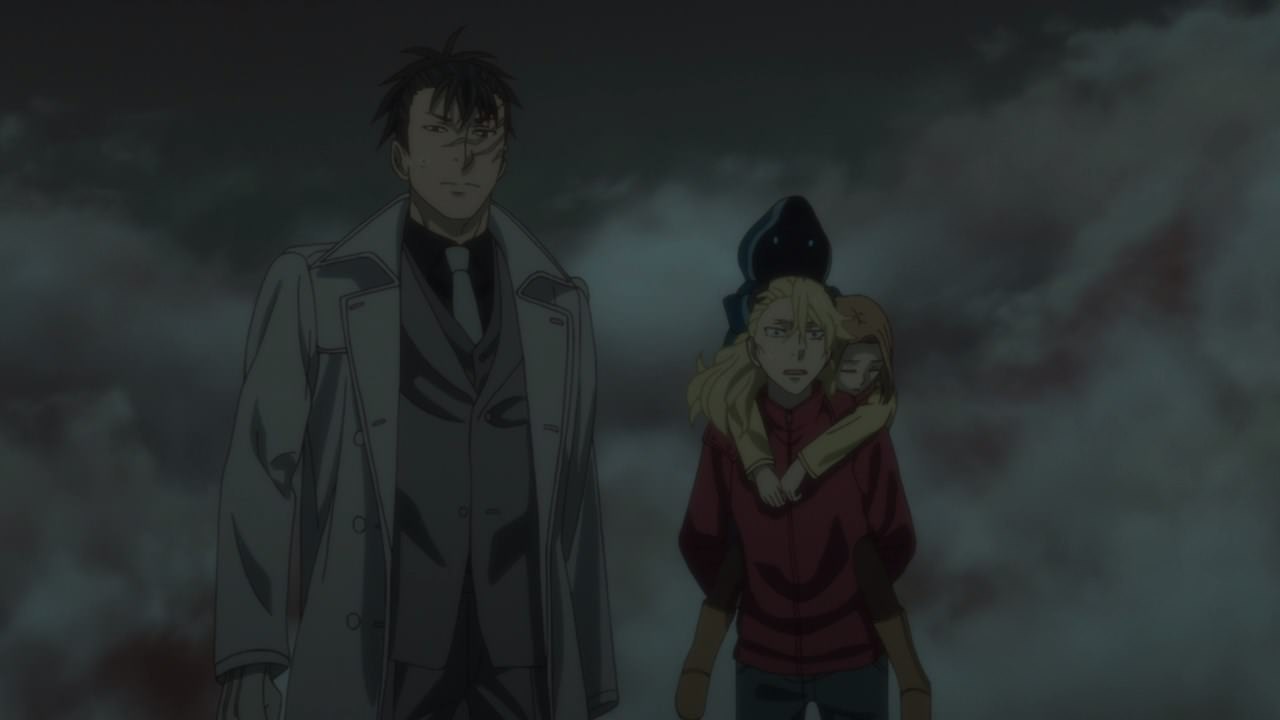 Also, seems that Mikhail Renfred and Alice have managed to rescue Stella Barklem. At least she wasn’t hurt or anything. 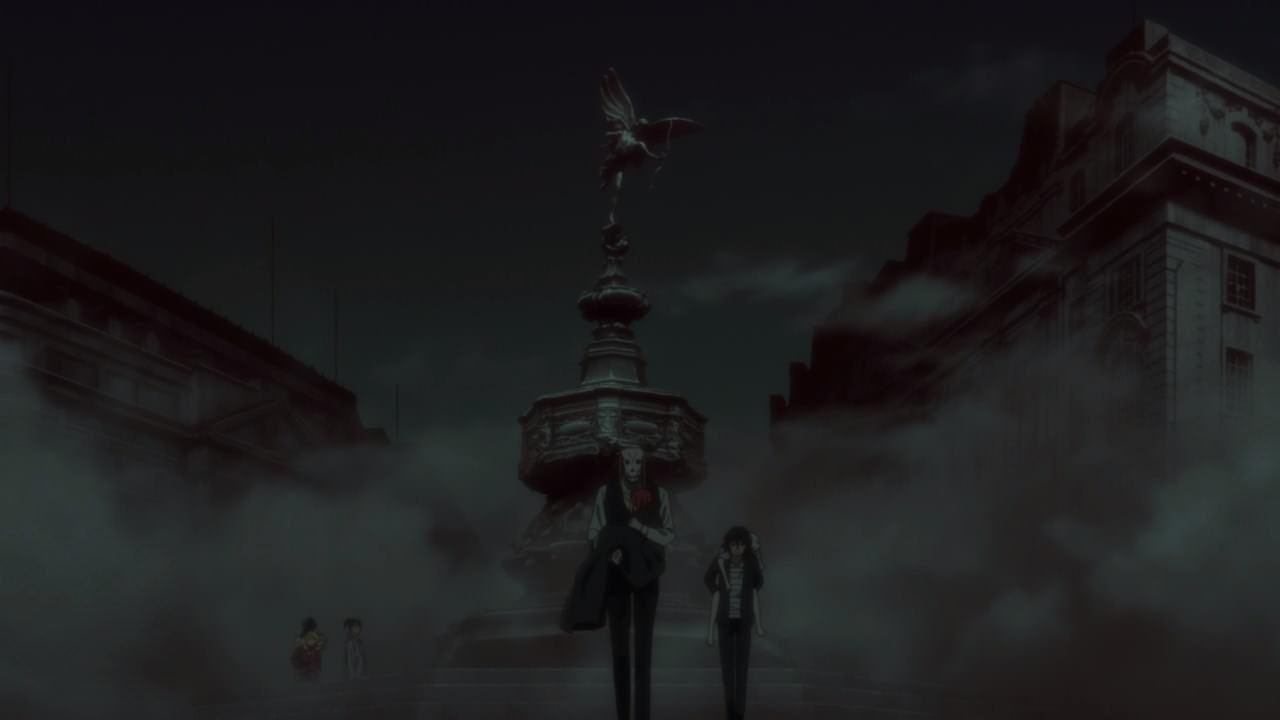 With that said, it’s time to go home as Elias Ainsworth will have to heal Chise’s wounds.

Besides, he and his allies are tired of dealing with Joseph or Cartaphilus anyways now that he’s put to rest. 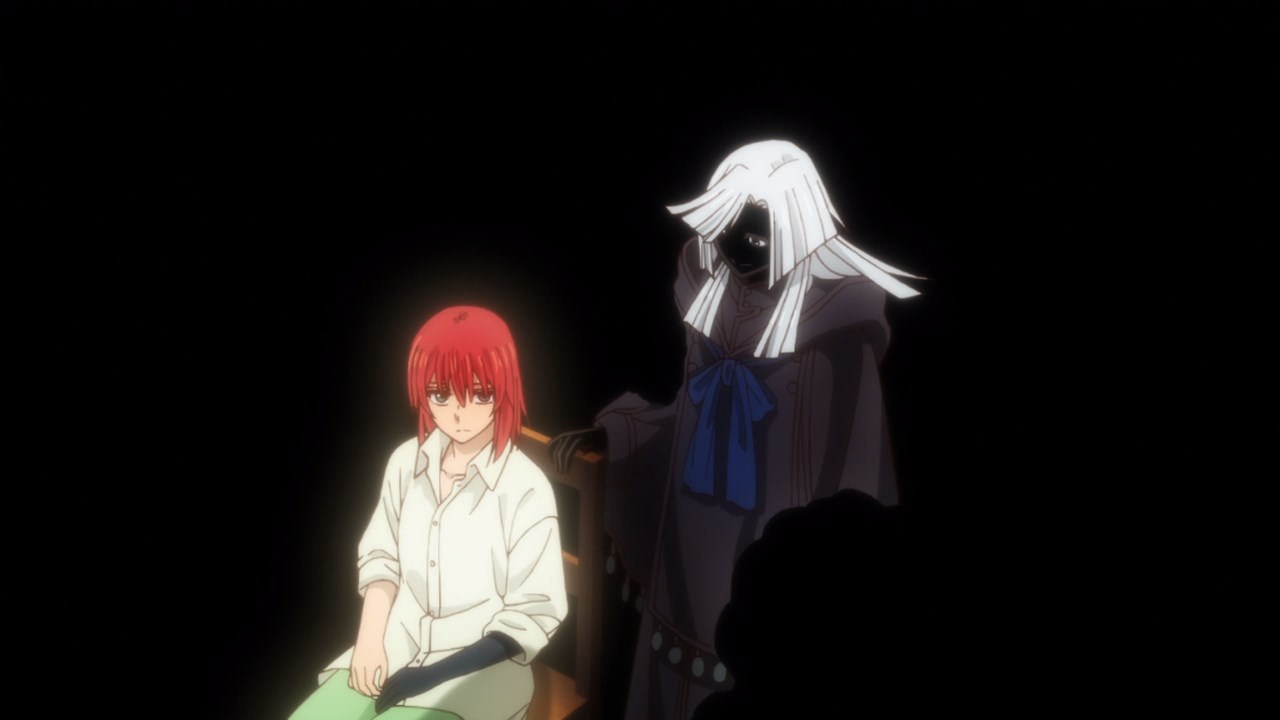 Speaking of Cartaphilus, he decides to keep Chise Hatori alive for the time being, but he warned Chise that the dragon inside her body will someday consume her until she’s dead.

In any case, it’s time for Chise to wake up as Cartaphilus will take his leave. He’ll return someday but we don’t know when will it happen. 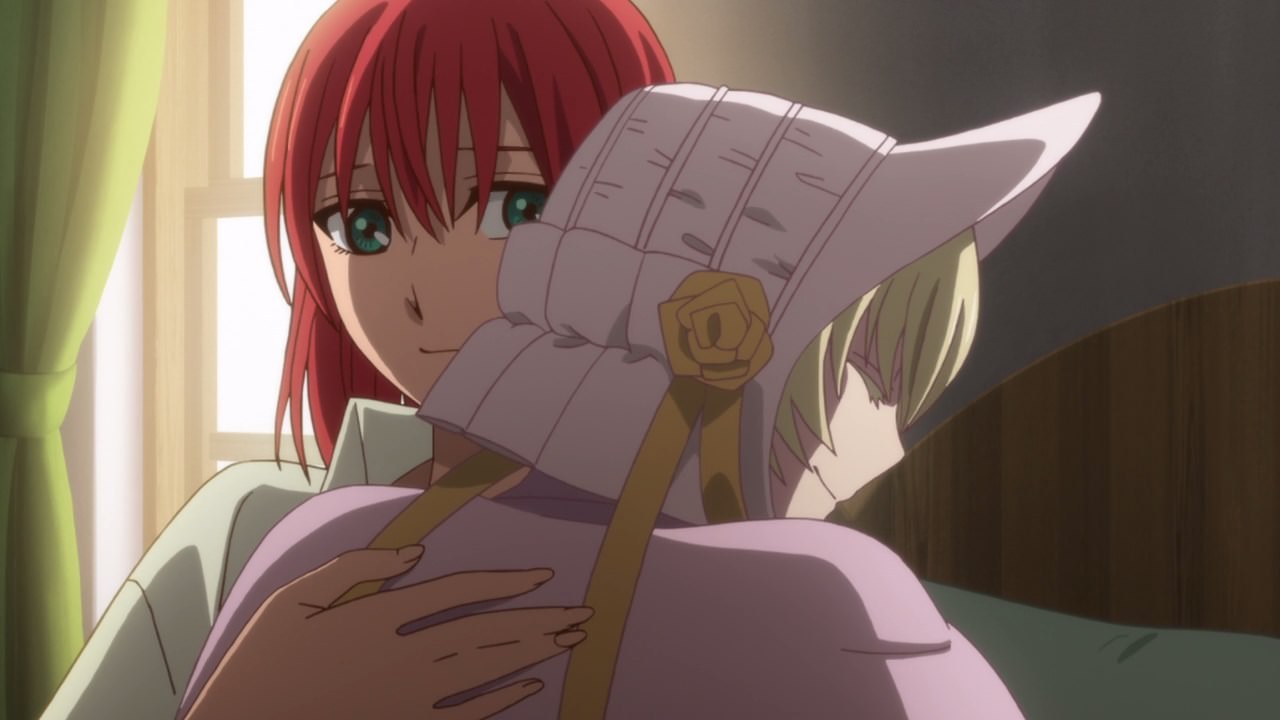 Once Chise woke up from her slumber after Elias put her left eye back, she was greeted by Silky where Elias’ maid is delighted to see her return. 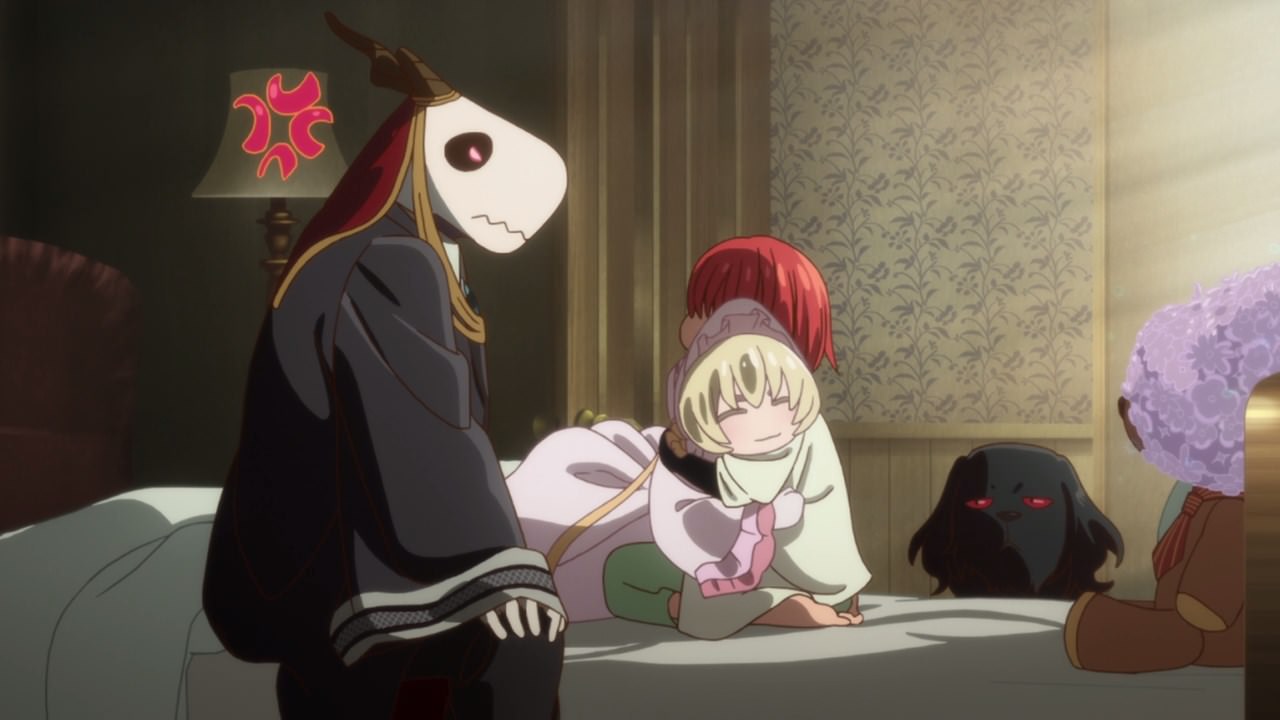 Of course, Chise Hatori is still angry at both Elias Ainsworth and Ruth for attempting to kill Stella Barklem just to keep her alive.

But you know what, it’s time for both Chise and Elias to forgive and move on. Despite being engaged, I think it’s better for them to understand each other, especially when Chise is being targeted by other evil beings. 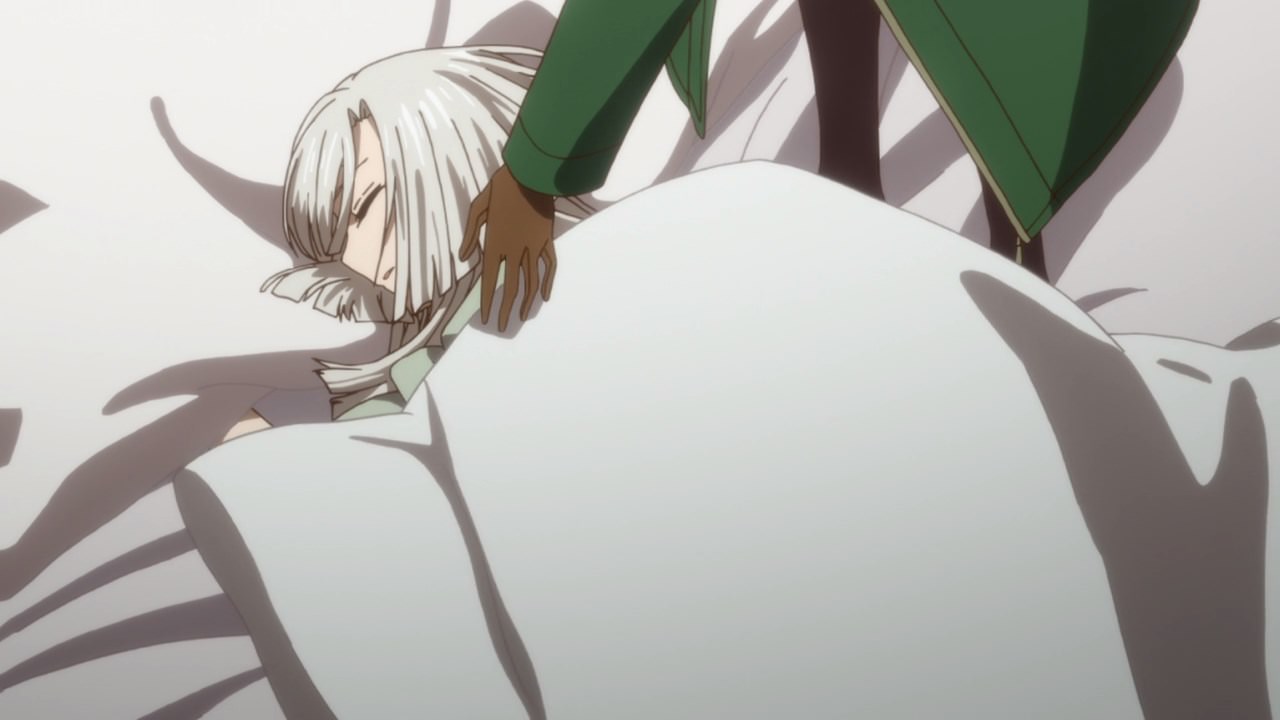 Meanwhile, it appears that Chise Hatori and Elias Ainsworth created an underground chamber and put Joseph there where he continues his deep slumber. 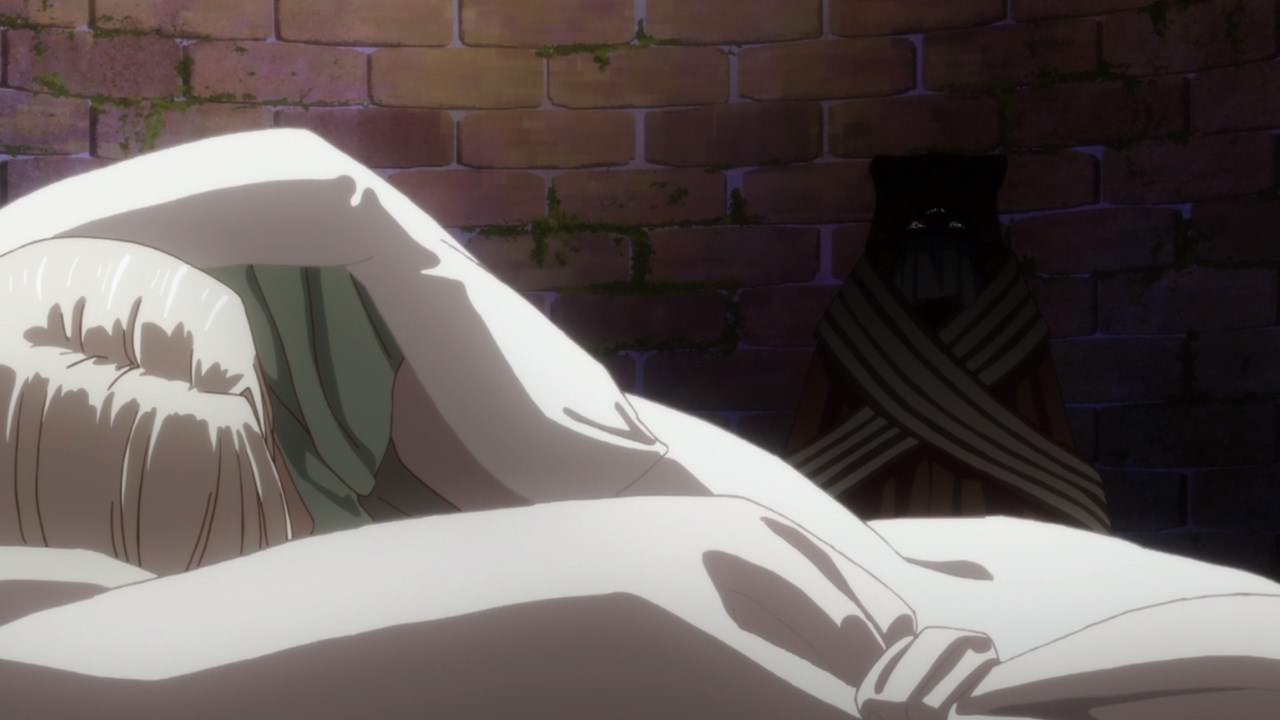 On the other hand, it appears that the Ashen Eye is alive after his head got cut off.

Seriously, I hate this guy for being a troll to not only to the Thorn Mage, but also Chise Hatori. What a scumbag! 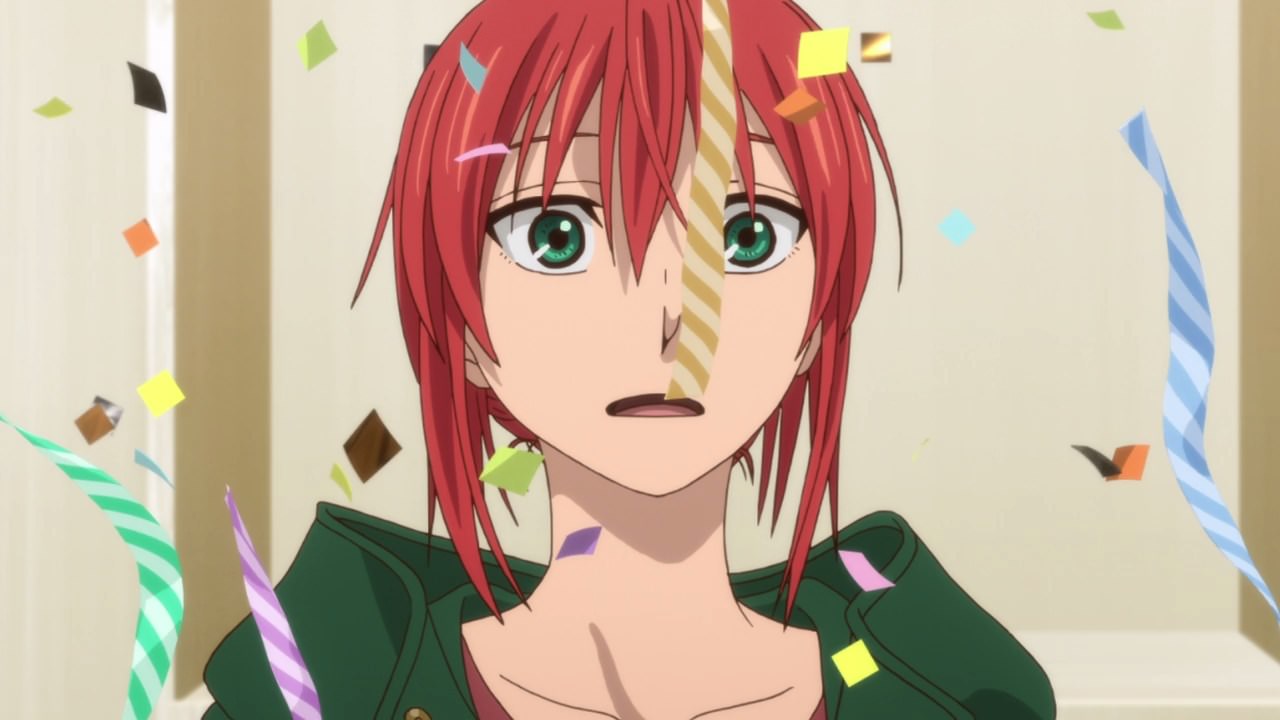 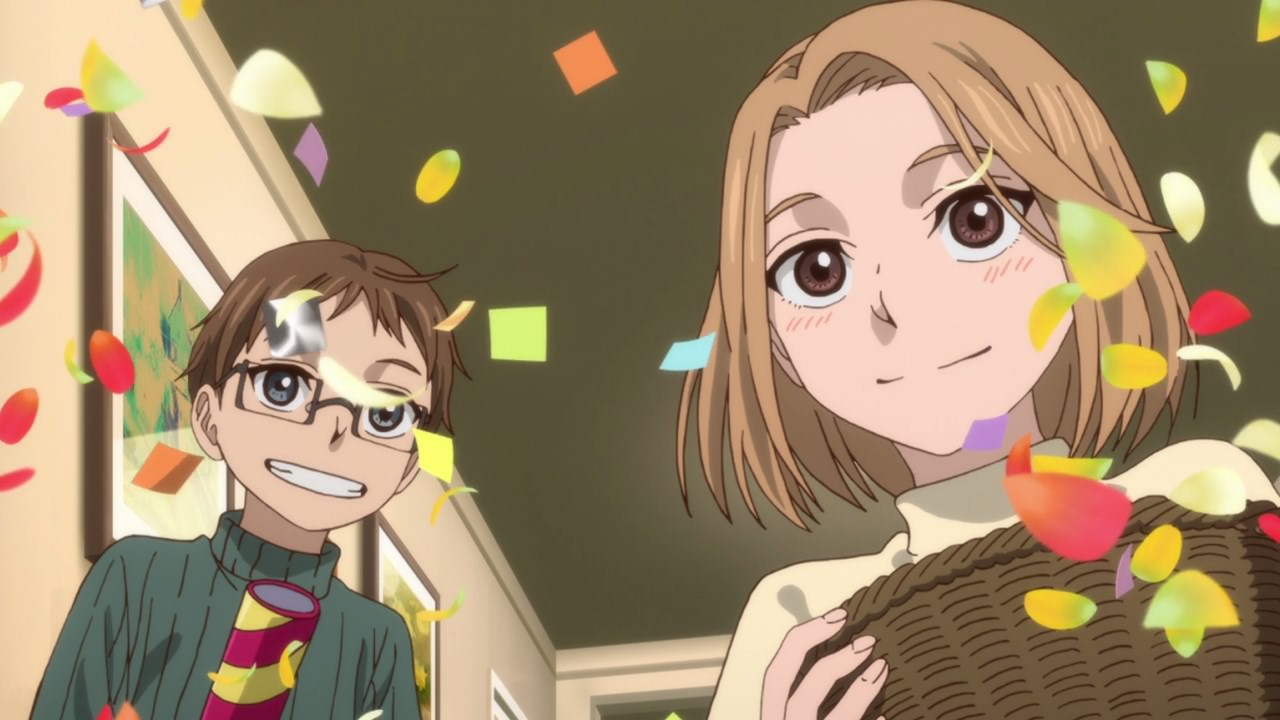 Now let’s move onto something good as Chise Hatori went to the Barklem residence where both Ethan and Stella greeted her a happy birthday.

Well isn’t it nice that Chise got a birthday that’s being celebrated by her friends. I wonder what gift she received from the Barklem family? 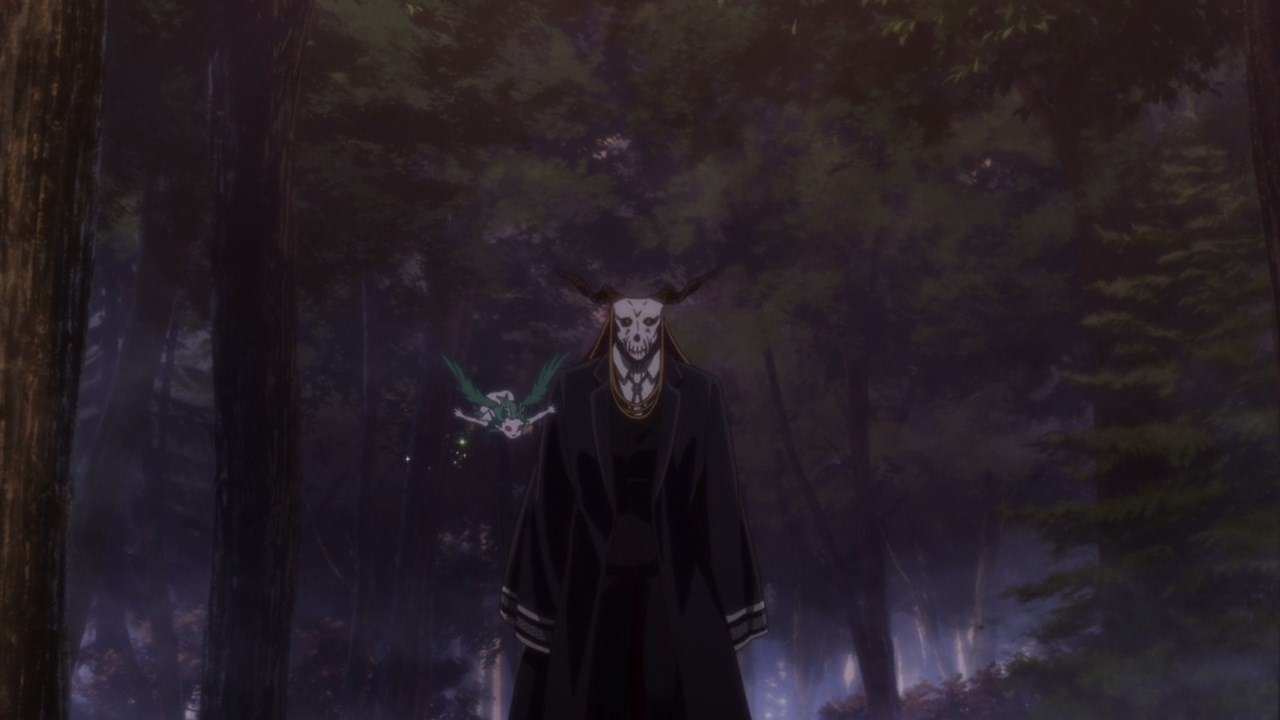 But let’s go back to Elias Ainsworth as he’s joined by an ariel to see Chise Hatori at the forest. 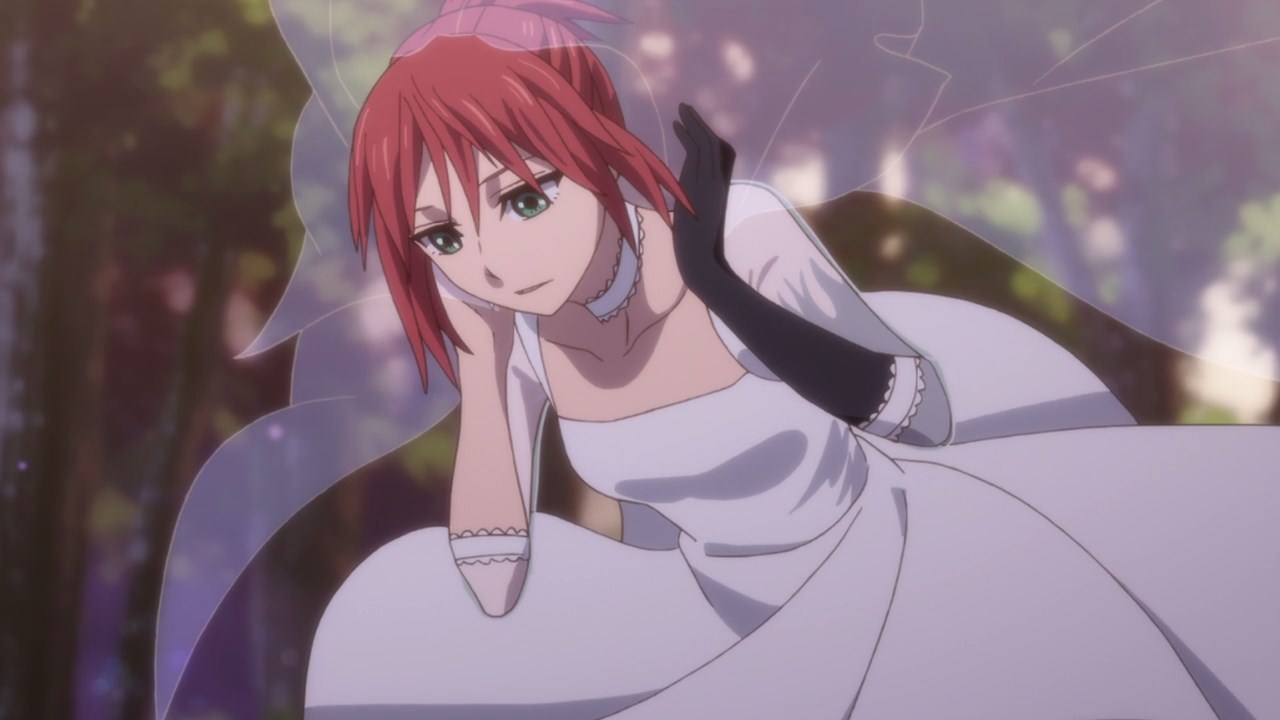 And speaking of Chise, I can’t believe that she’s wearing a bridal dress. Don’t tell me that both Stella and Ethan gave her a dress as a birthday present? 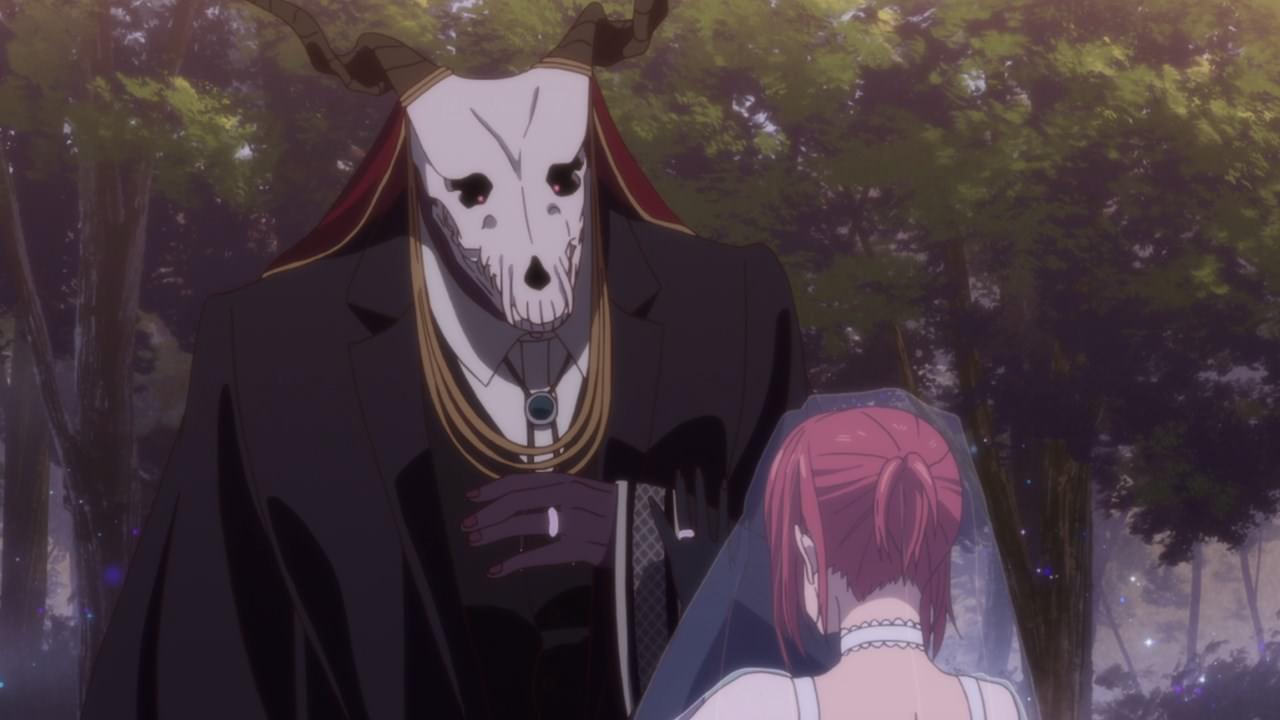 Not only that, but Chise Hatori received a ring from Angelica Burley in which she put it to Elias’ finger apart from hers.

Hmm, I feel that this might be a wedding ceremony. Quick, someone needs to call Simon Cullum because both Elias and Chise are gonna get married today! 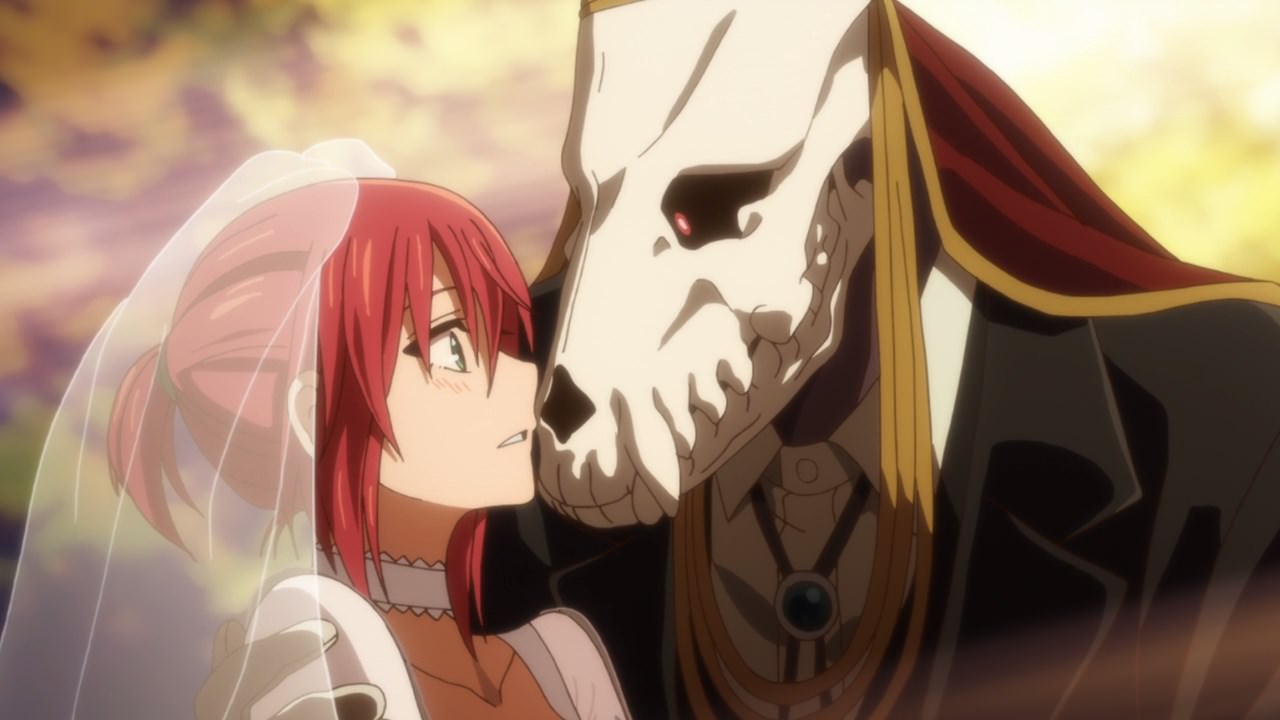 Well everyone, that’s the end of The Ancient Magus’ Bride and I must say that it was a great experience watching this show from beginning till end. Not only the visuals and the soundtrack are amazing, but the story is very engaging where everything is featured from character development to showing off interesting Celtic folklore throughout the show.

Anyways, I’m glad that I’ve picked up The Ancient Magus’ Bride because it’s an amazing TV series to watch, and kudos to Studio WIT for adapting the manga into something very magical. Now that we’re done watching the show, I guess it’s time for Chise Hatori and Elias Ainsworth for a honeymoon!