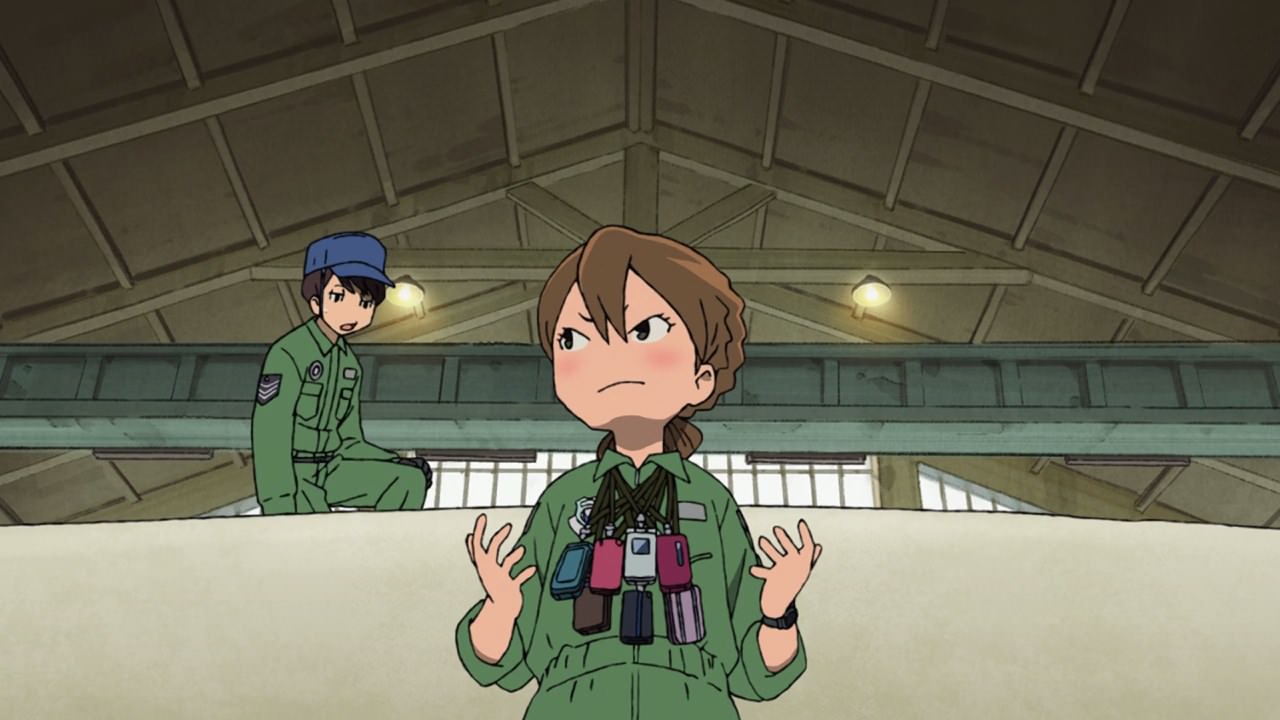 It’s time for a long post for Episode 2 as I introduce you Nao Kaizaki, a D-Pilot cadet who has such great promise because her mother used to pilot one, but it didn’t pan out because the Organic Transporting Flyer doesn’t like Kaizaki much until Hisone Amakasu came to Hangar 8.

But that doesn’t stop Nao Kaizaki from piloting a dragon as she straps herself with a bunch of flip phones, something that Haruto Okonogi would not recommend as the OTF will just simply eat the flip phones. 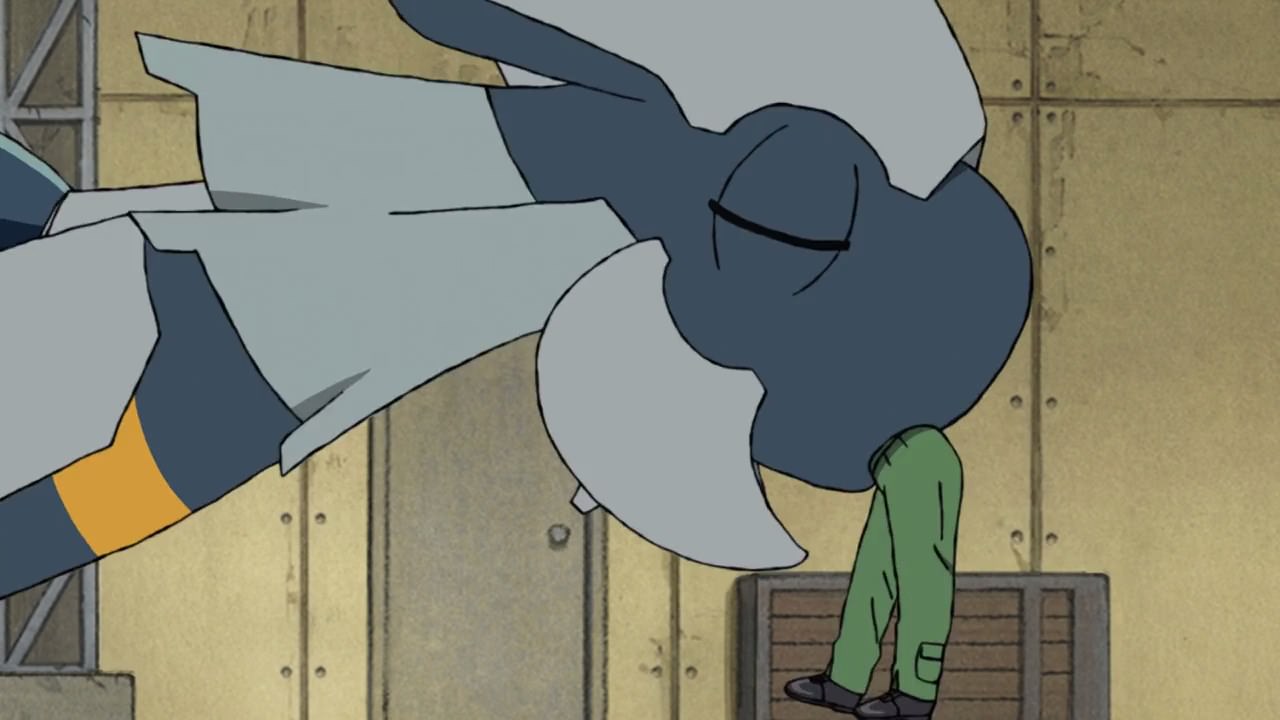 In any case, the Organic Transporting Flyer swallowed Nao Kaizaki whole, much like how this dragon swallowed Hisone Amakasu on the first episode. 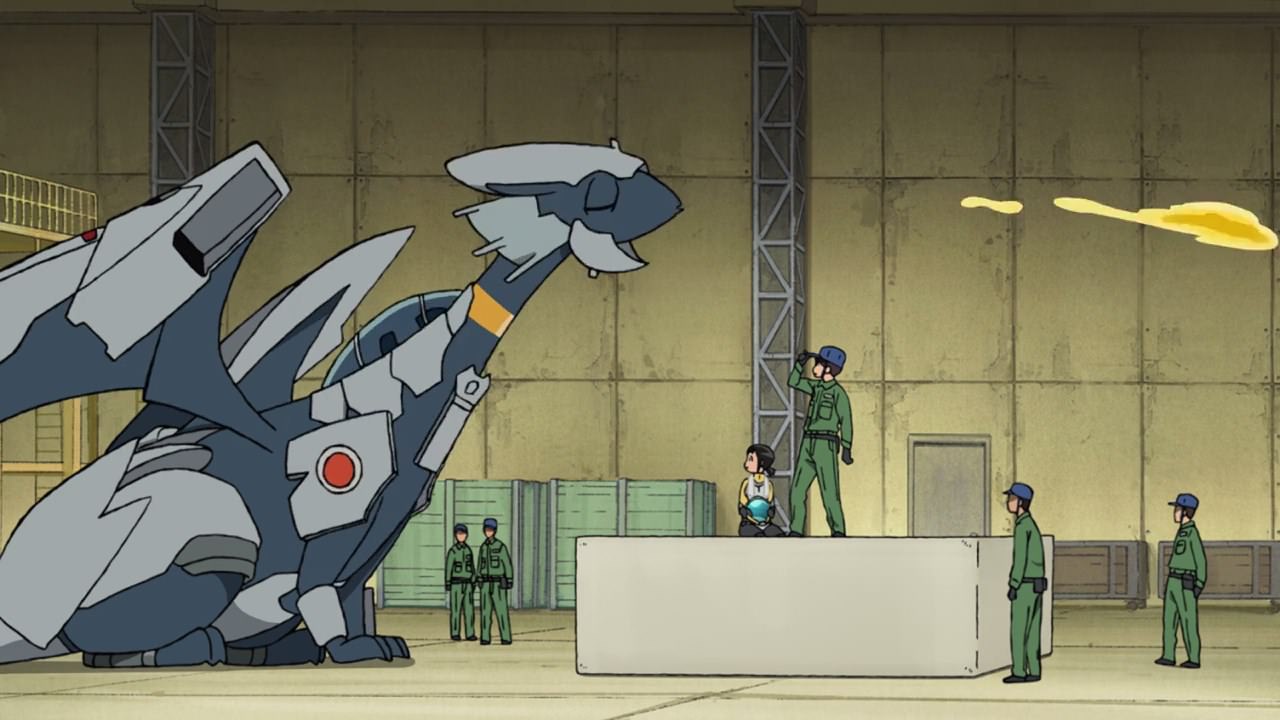 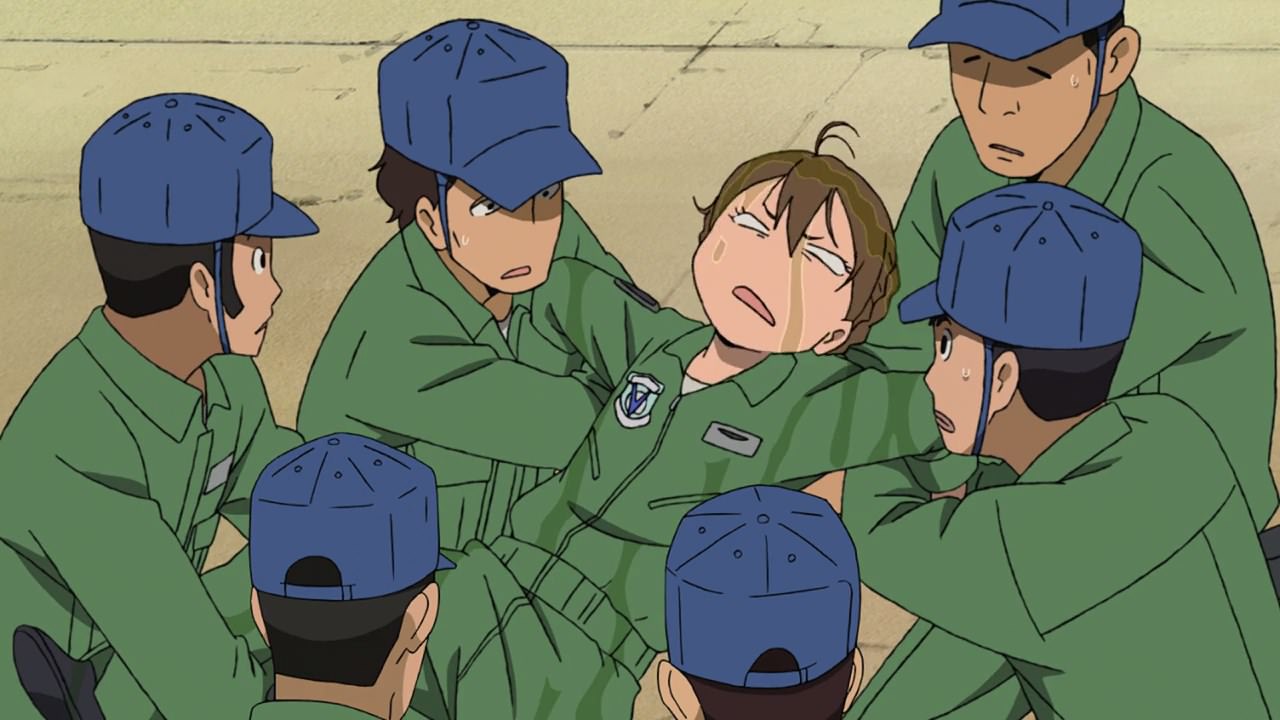 But afterwards, the OTF will simply spit Kaizaki after getting all the flip phones and digest it. Yeah, this dragon still doesn’t like Nao Kaizaki very much. 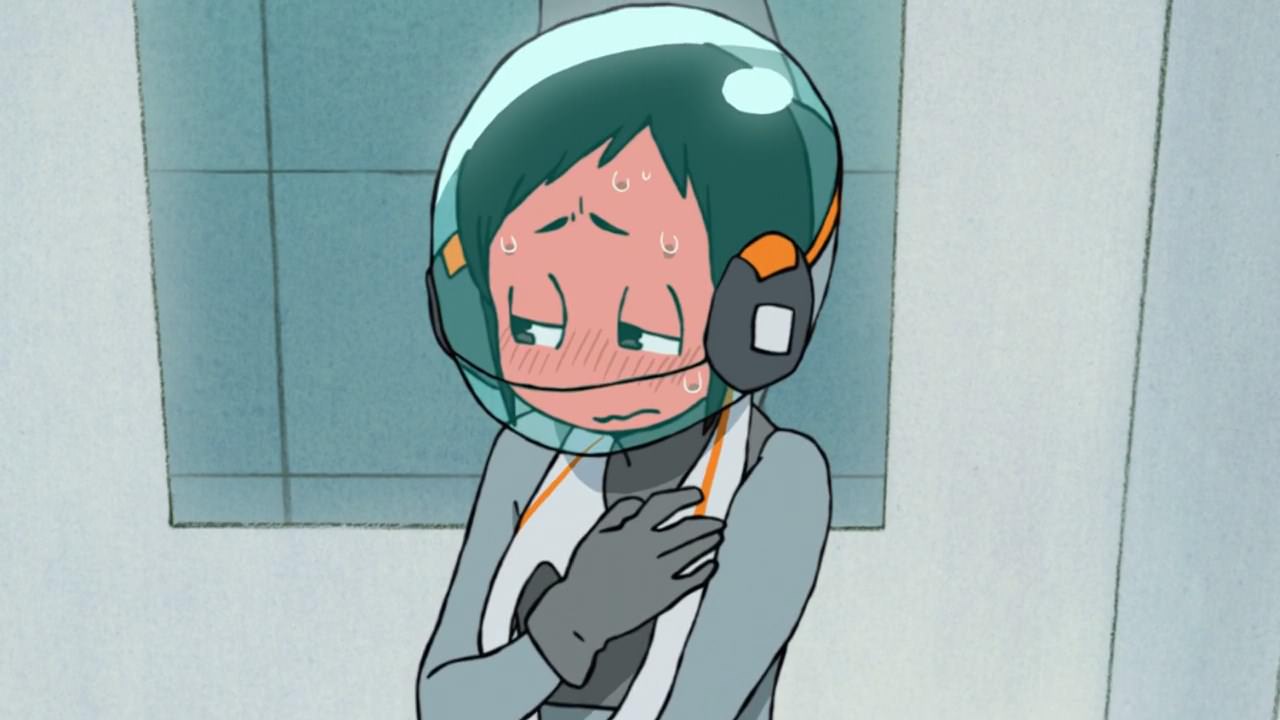 Speaking of Hisone Amakasu, looks like she’s trying out some pilot suits designed by Vice-Director Hiroki Ikushima who just returned to Japan after his overseas trip in Italy. 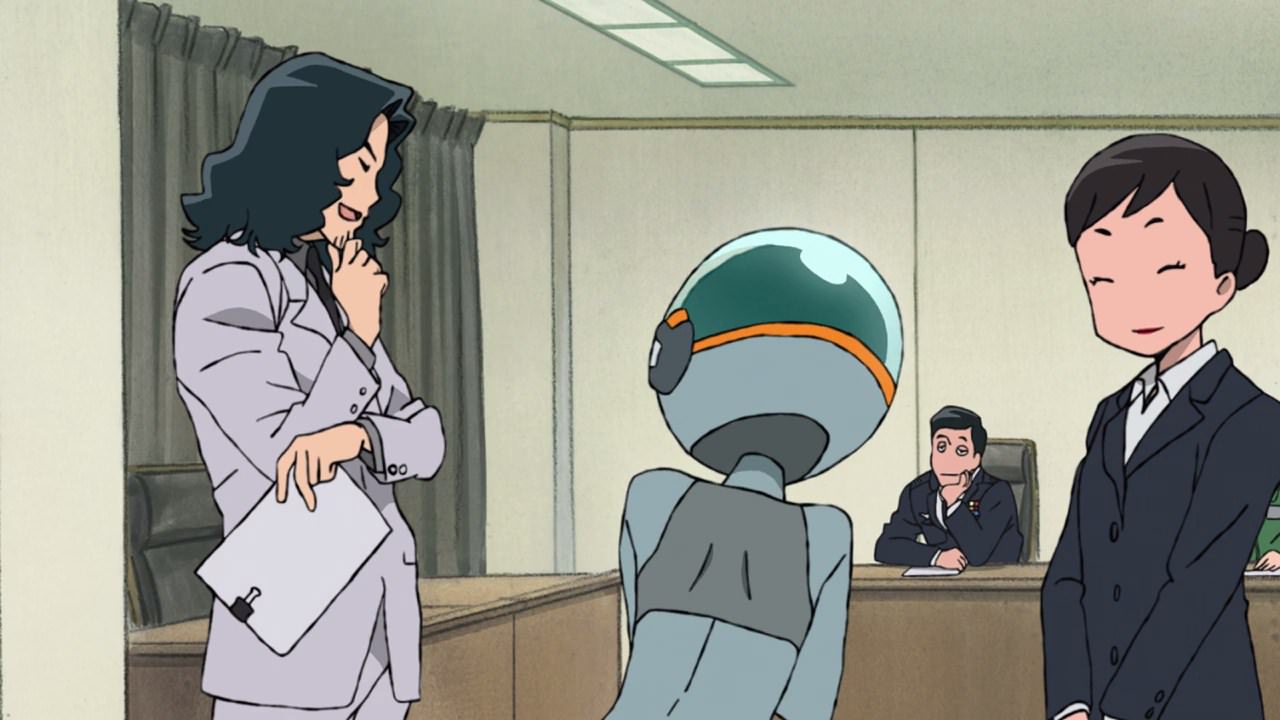 But as you can see, Vice-Director Ikushima is happy that his suit design fits well for the rookie pilot. Heck, even Commander Hiroshi Sosoda agreed.

Of course, Vice-Director Ikushima will have to tweak the pilot suit until its design is finalized. 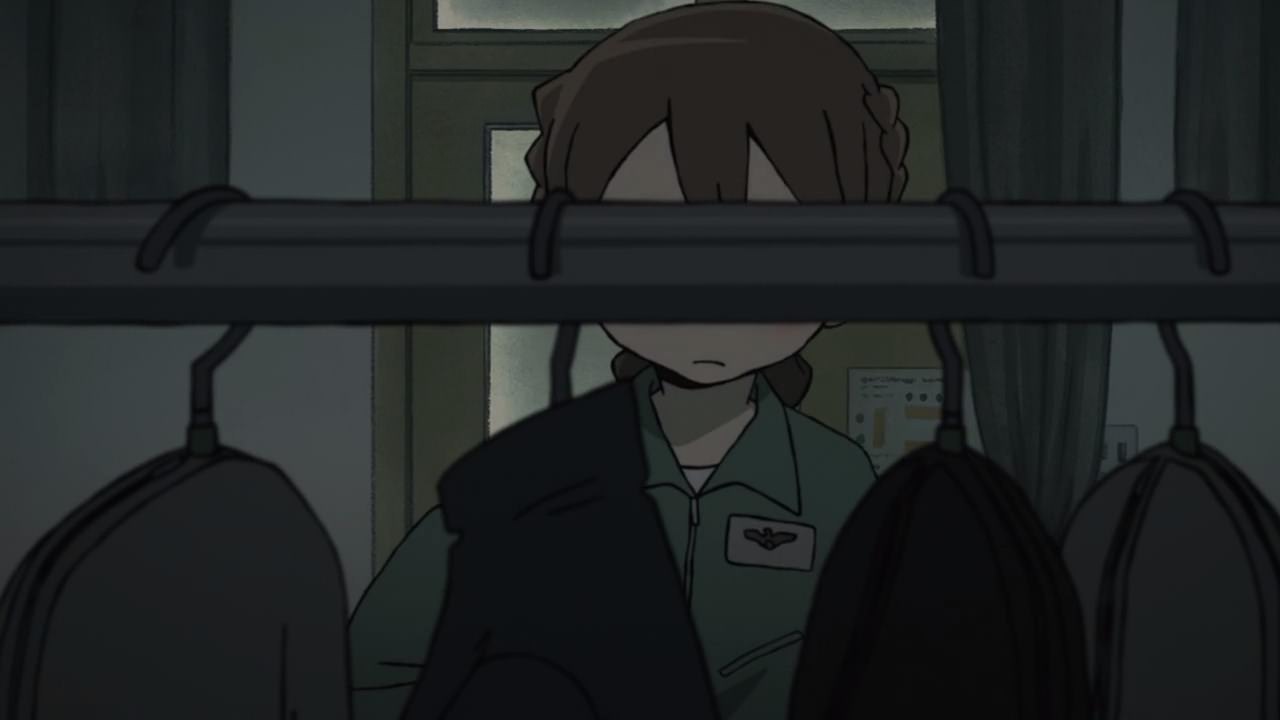 Then again, someone wants to ruin it just because a rookie pilot got to pilot an OTF. That’s right, it’s Nao Kaizaki… 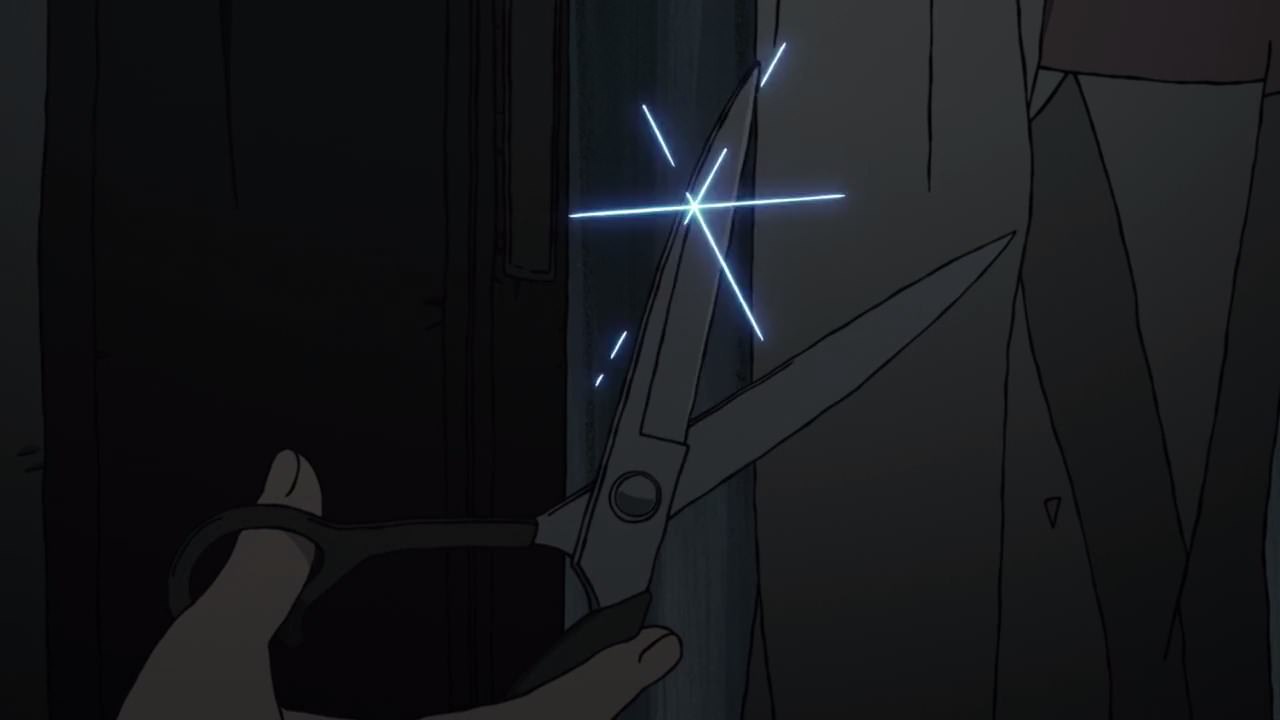 …as she’s gonna do the pettiest thing ever by destroying the prototype pilot suit with nothing but scissors. That’s gone too far there. 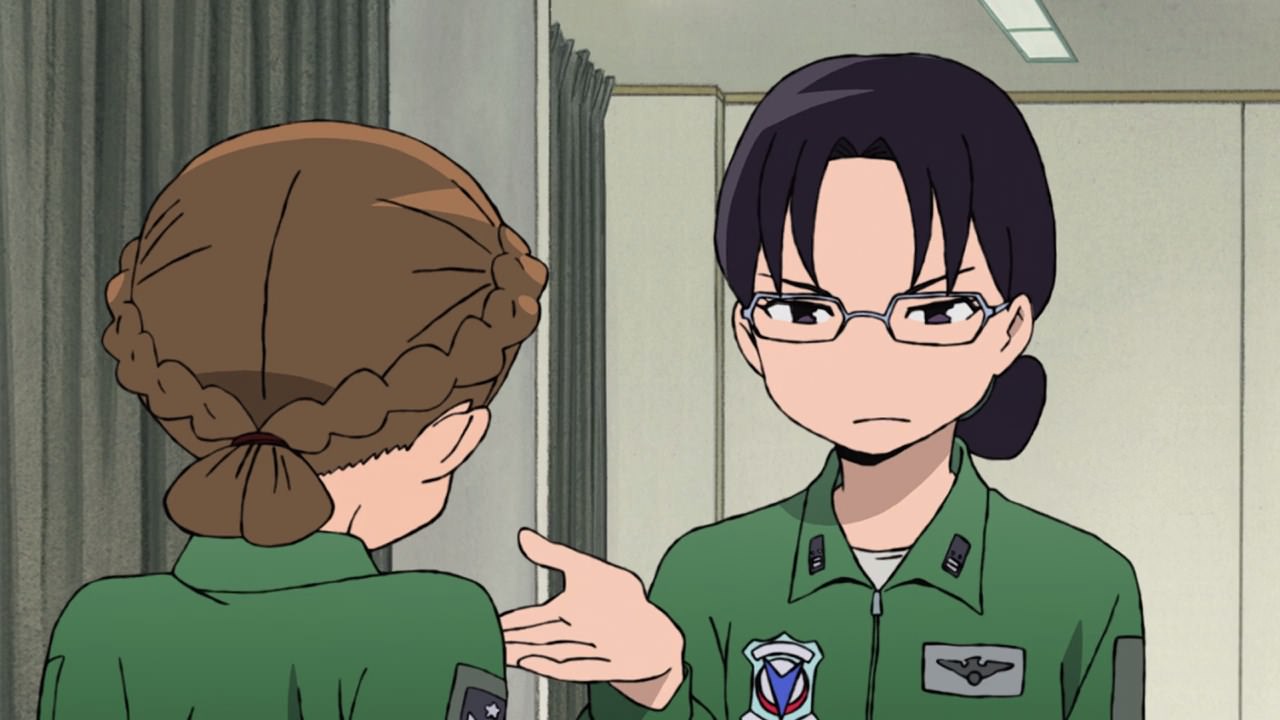 However, Lieutenant Colonel Remi Kakiyasu saw what Kaizaki is doing as she ask the cadet to hand over the scissors.

Sure that Lt. Colonel Kakiyasu understands Kaizaki’s frustration, but she won’t tolerate petty things just because one cadet didn’t get the chance to pilot a dragon. 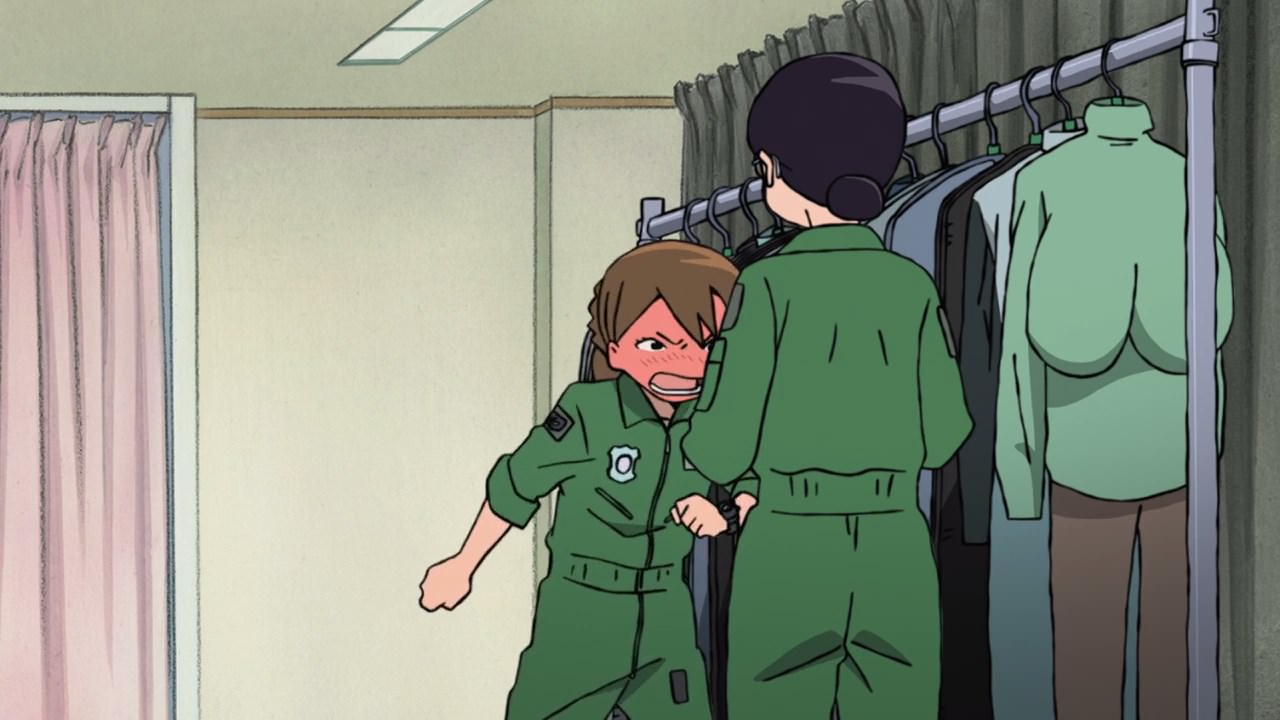 Then again, Nao Kaizaki doesn’t take it as she tells Lt. Colonel Kakiyasu to screw themselves and quit the JASDF. That was mean coming from her. 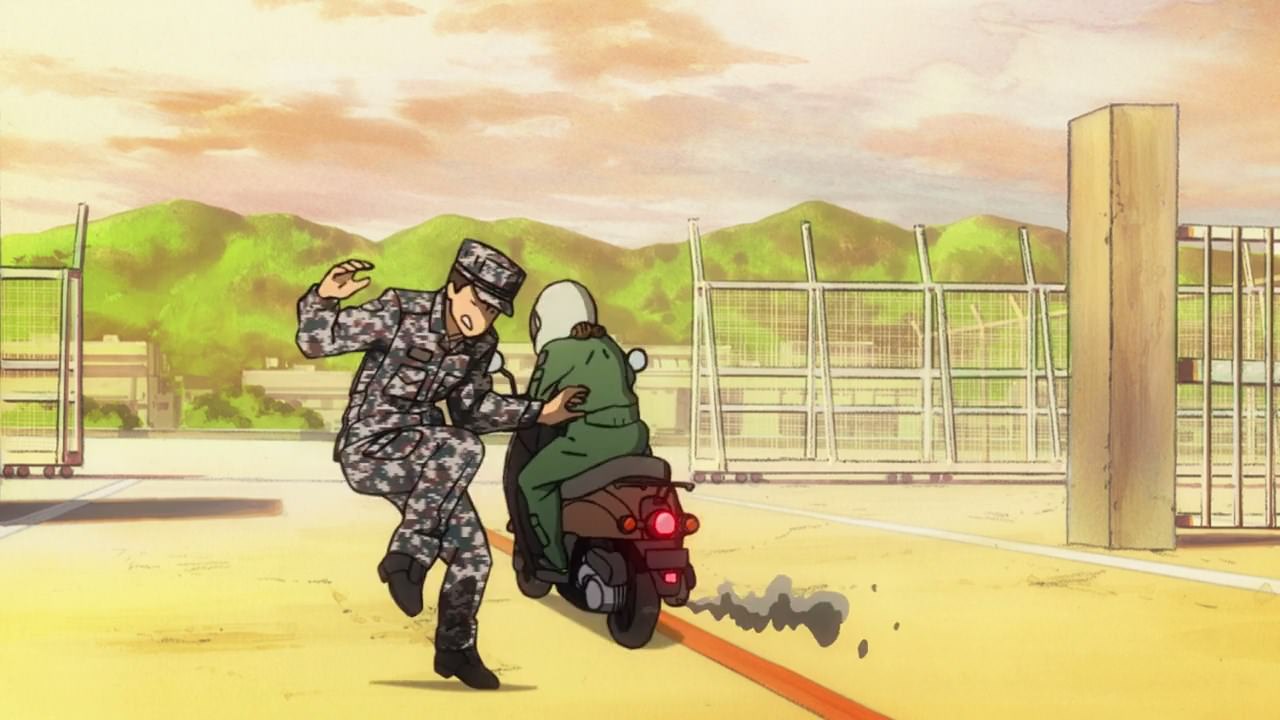 Oh, and she stole someone’s bike just because Kaizaki didn’t get what she wants. Looks like Nao Kaizaki will be court-martialed for desertion! But don’t worry, I’m sure that Kaizaki will return… and face punishment.

However, it turns out that she didn’t return to the base, which worried a lot of the enlisted personnel as having a missing cadet is a big deal. With that said, time for a search party, which is expensive by the way! 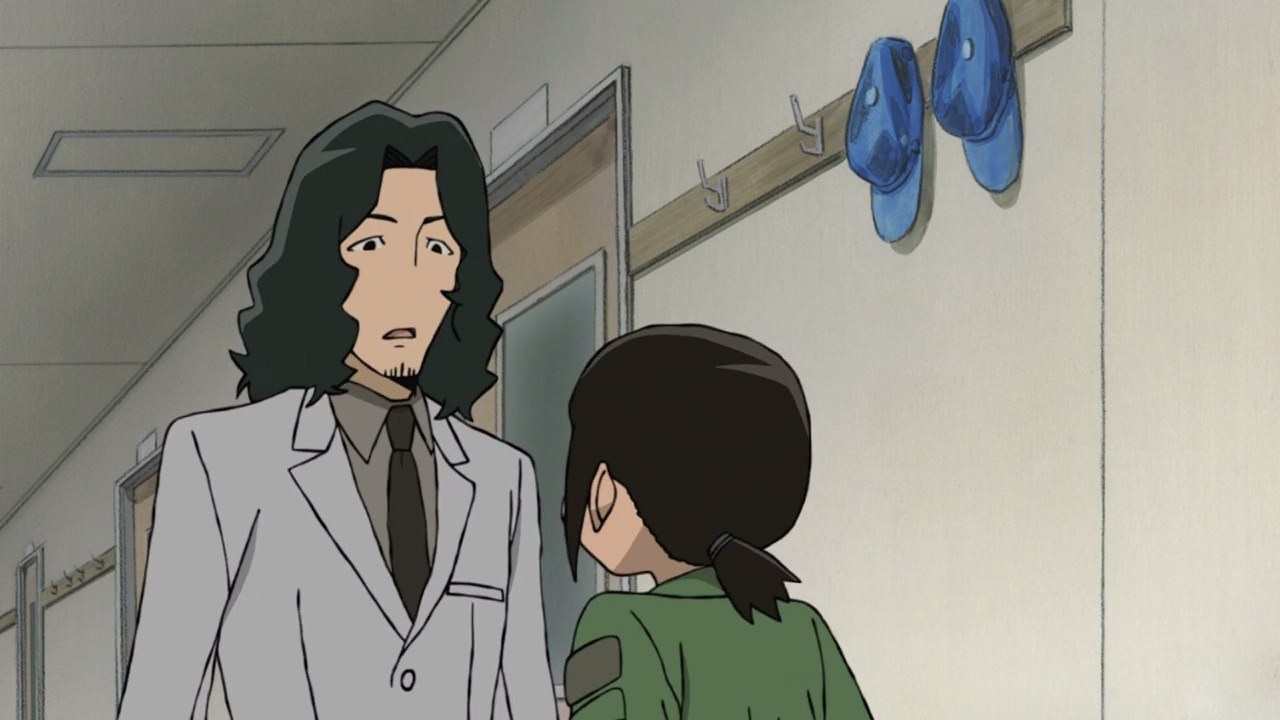 Then again, seems that Hisone Amakasu has volunteered to search for Nao Kaizaki using the OTF.

Oh, and it’s a great timing too because Vice-Director Hiroki Ikushima has just finished his pilot suit for Amakasu. Of course, there’s no time for some test-fitting as Hisone took the suit and put it on. 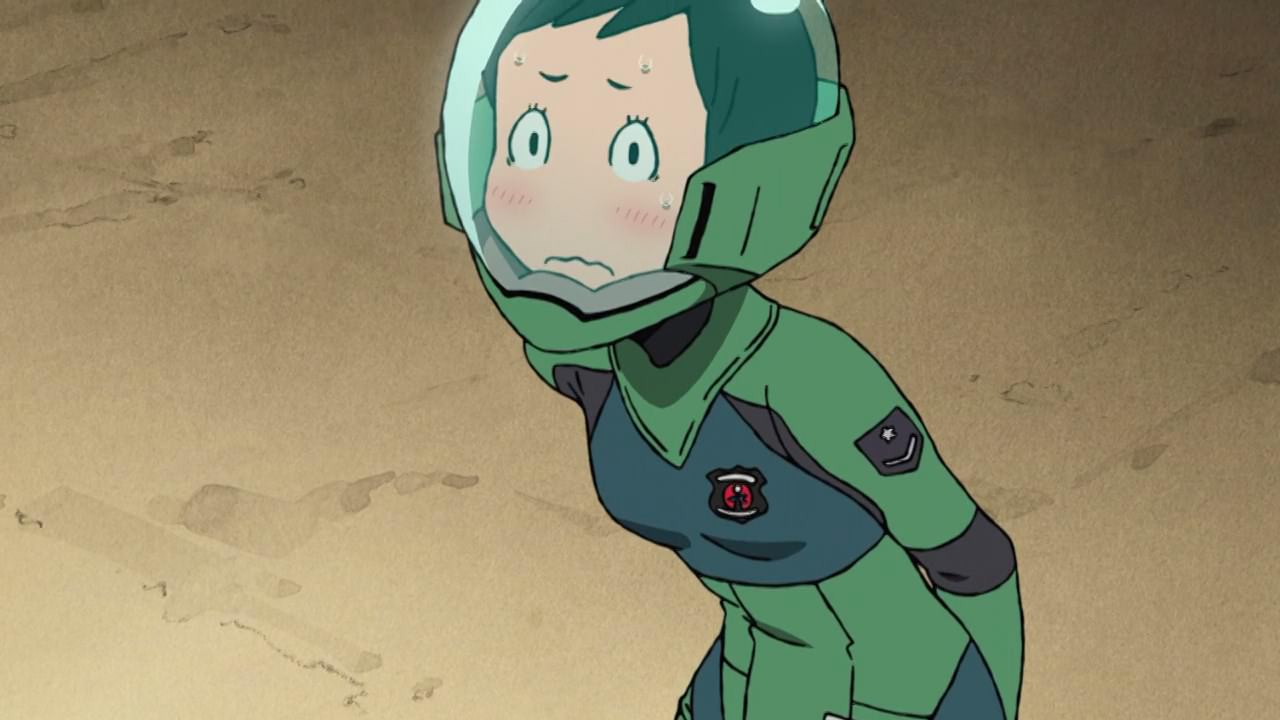 And what do you know, looks like Ikushima’s new pilot suit fits well for Hisone Amakasu, albeit a bit skin-tight. 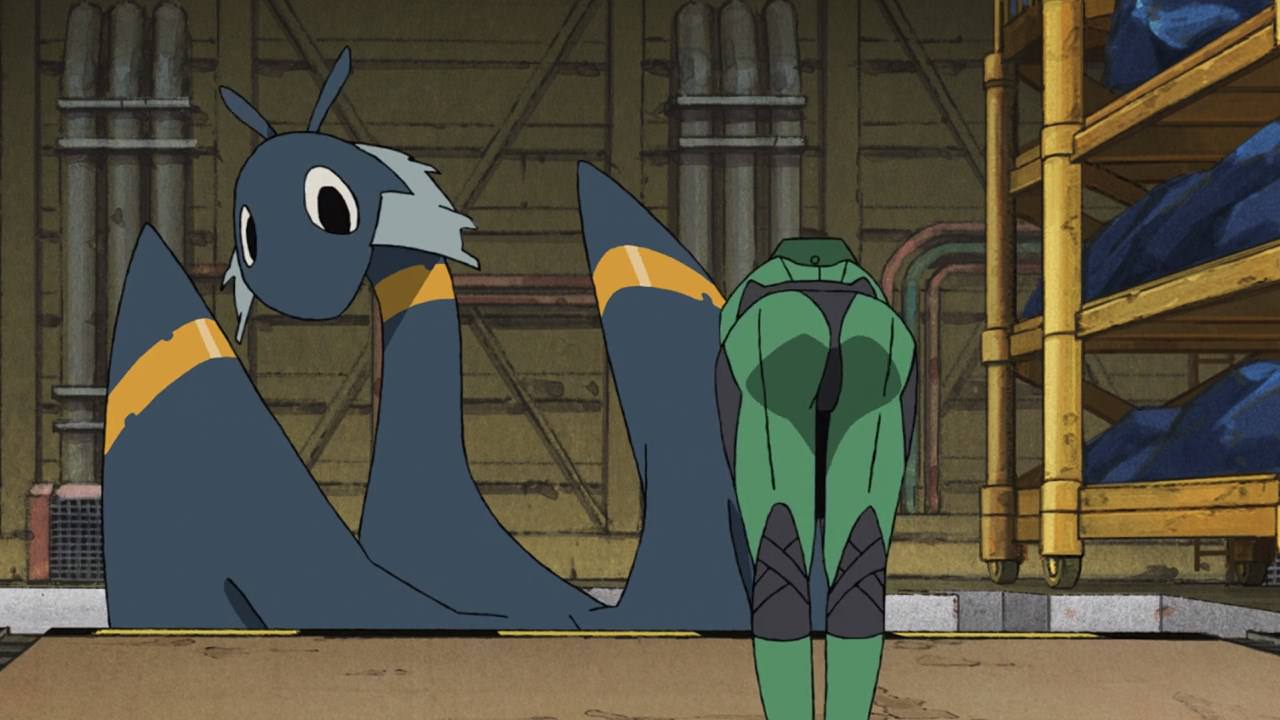 Oh, and I can see that ass from this angle! Dammit BONES, you making me turned on! Anyways, Hisone asked the OTF to help her find Nao-san and apologize for being so half-baked.

Even though she said insensitive things to her, it’s not like Hisone Amakasu hated Nao Kaizaki in the first place as she respects the cadet. And also, Hisone will do her best to be a better D-Pilot from now on. 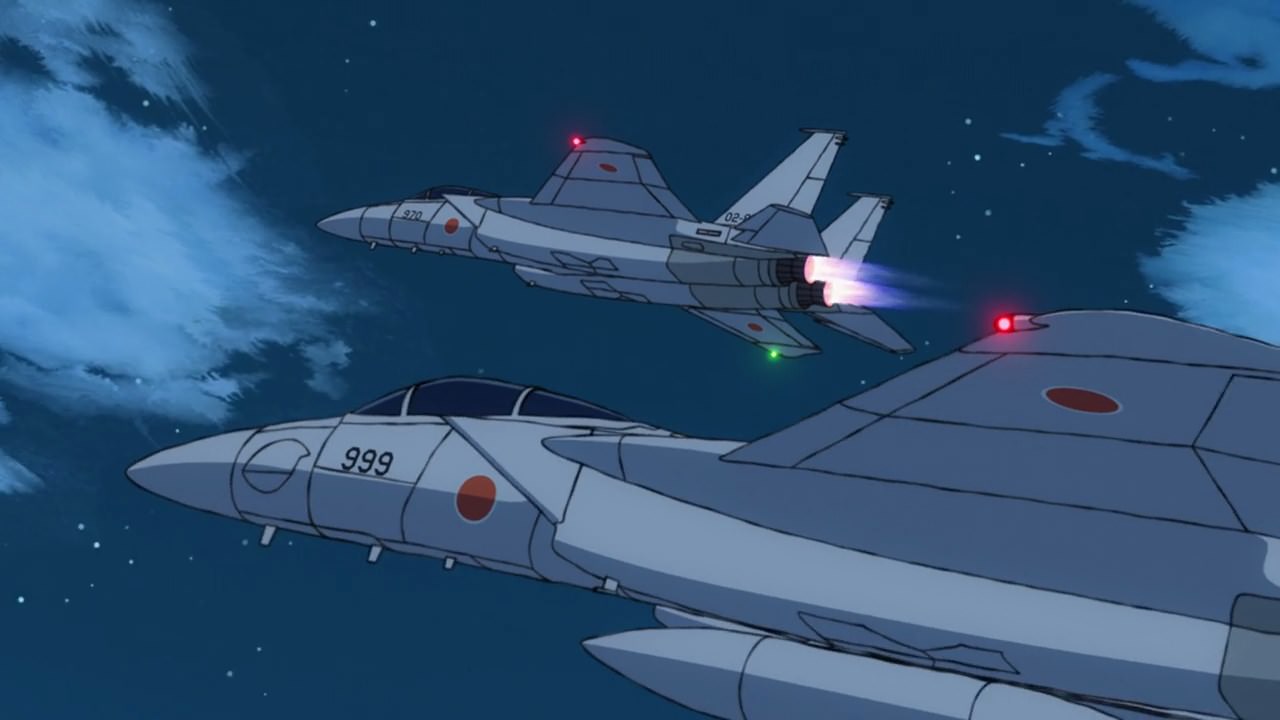 Anyways, the Organic Transporting Flyer accepted Hisone’s apology and went flying with her in order to find Nao Kaizaki. 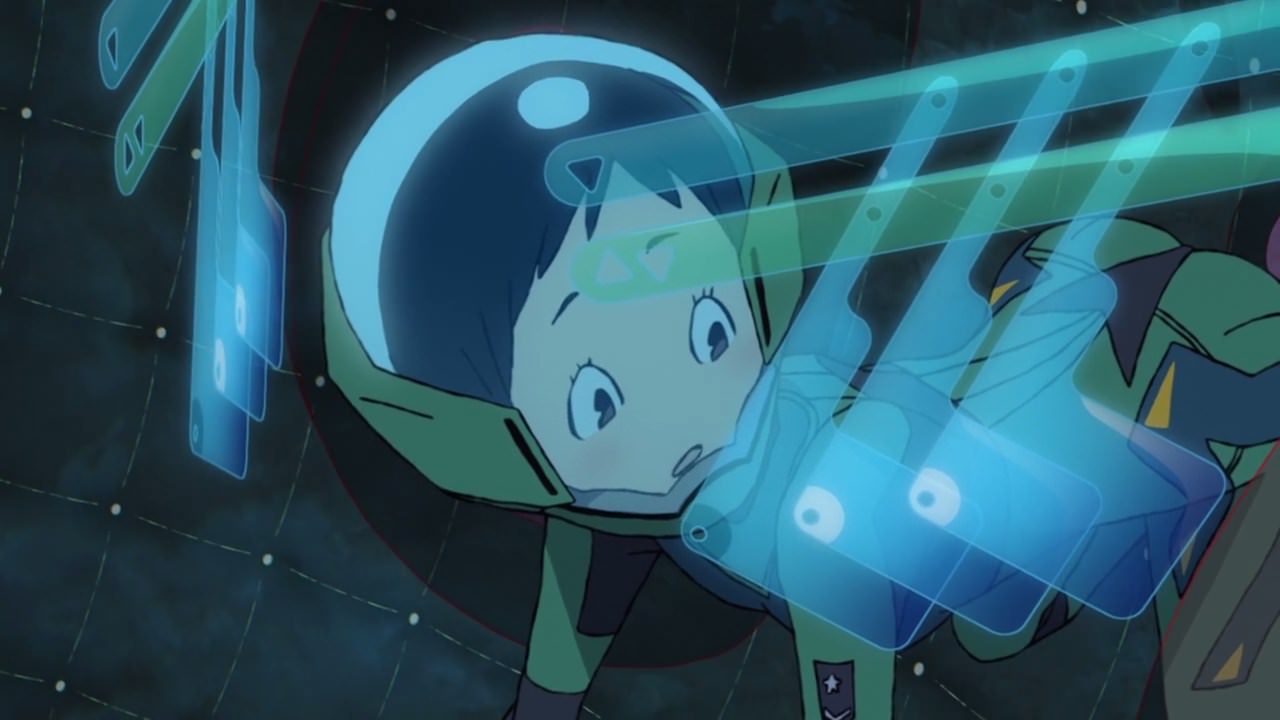 The OTF, now named as Maso-tan, is capable of finding Kaizaki just for her smell alone. Then again, I’m sure that Kaizaki will return to the base when she’s hungry. 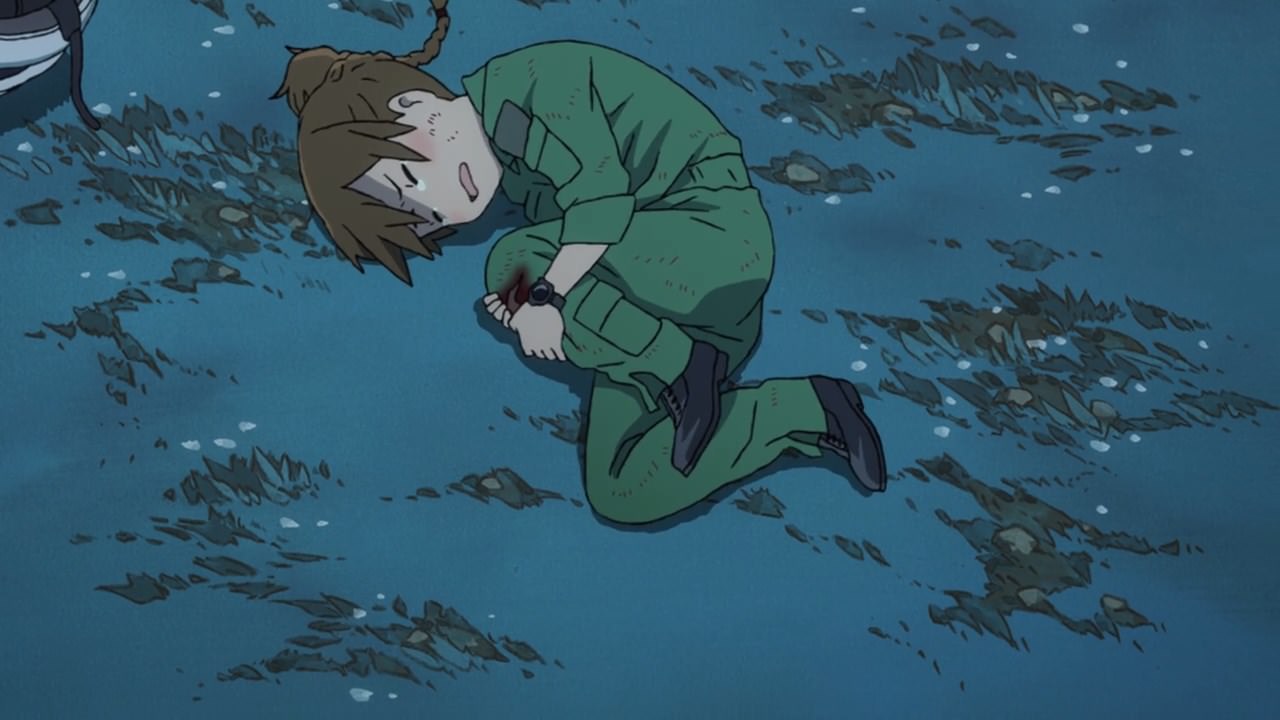 On second thought, I’ll take it back as it turns out that Nao-san crashed her stolen bike and fell off the cliff where she got a broken leg. No wonder she’s gone missing for two days. 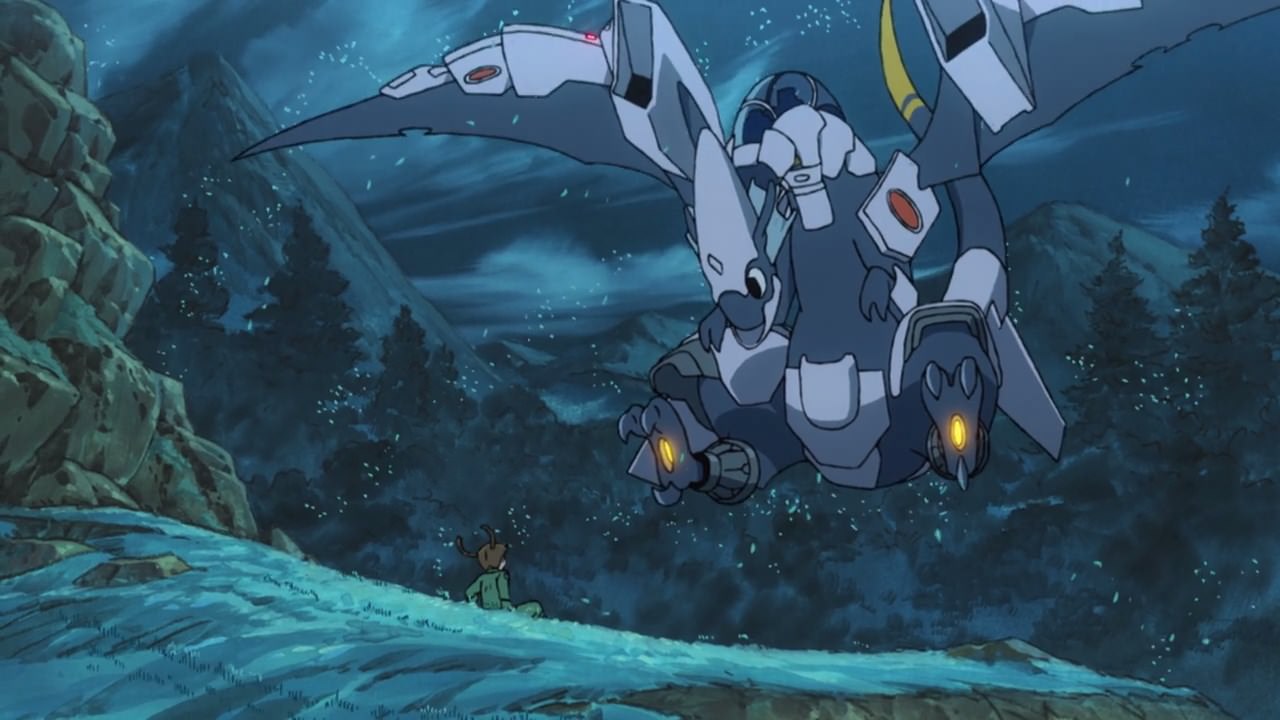 Fortunately, Maso-tan managed to find Nao Kaizaki as the dragon landed like a VTOL airplane. Who needs a Harrier Jump Jet or an F-35B Lightning II when you have a dragon. 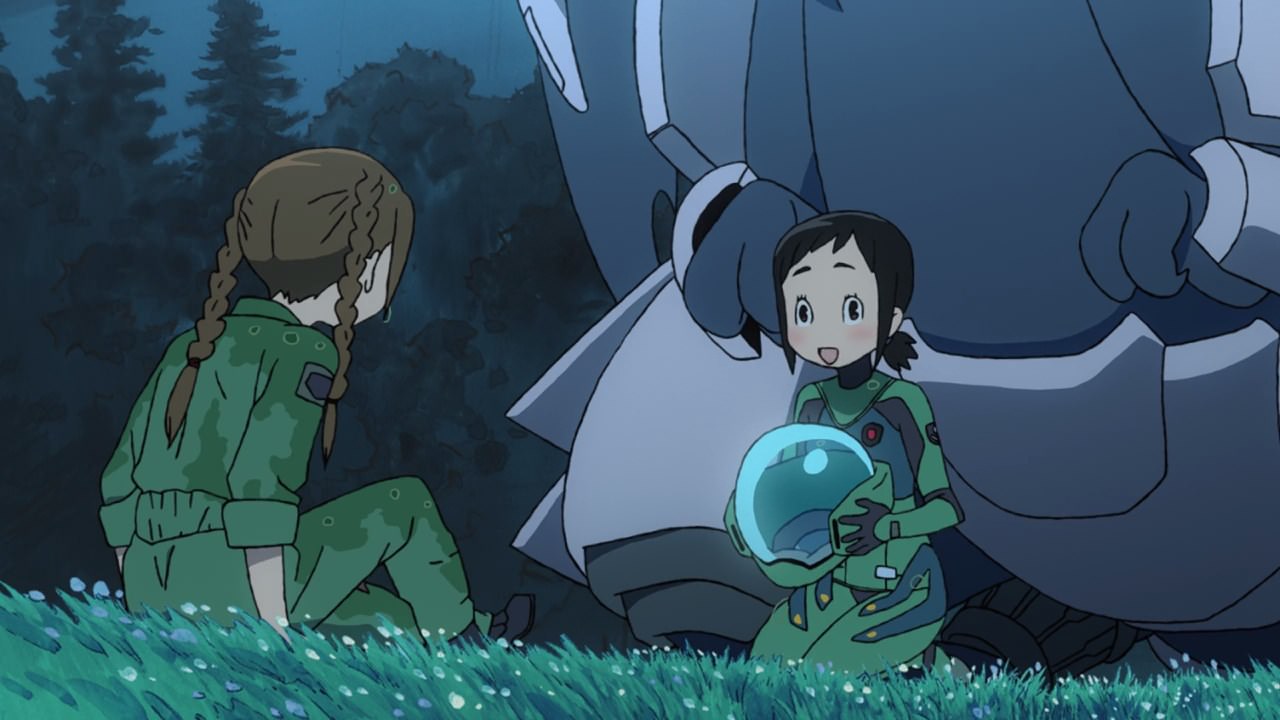 Anyways, Hisone told Nao-san that she’ll be fine once Maso-tan swallows and carries her back to the base.

She doesn’t need any reason to refuse Amakasu’s offer ’cause Kaizaki is injured and she needs some treatment fast. 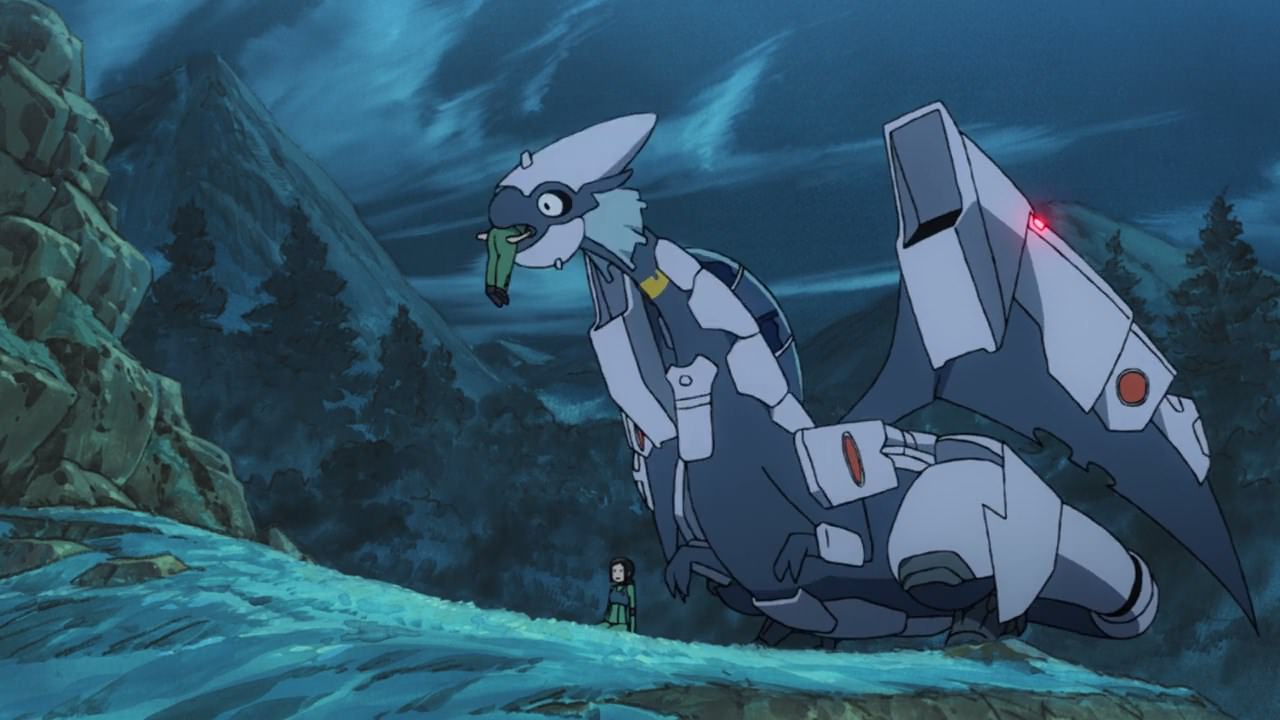 With that said, Maso-tan gobbles Nao Kaizaki whole and carried her back to the base. But wait, if Kaizaki goes back to the Gifu Air Base, she’ll be court-martialed!

Then again, I think Nao Kaizaki will get a light punishment if she remained in the Japan Air Self-Defense Force. If she didn’t, Kaizaki will have to pay a hefty sum for the search party cost. 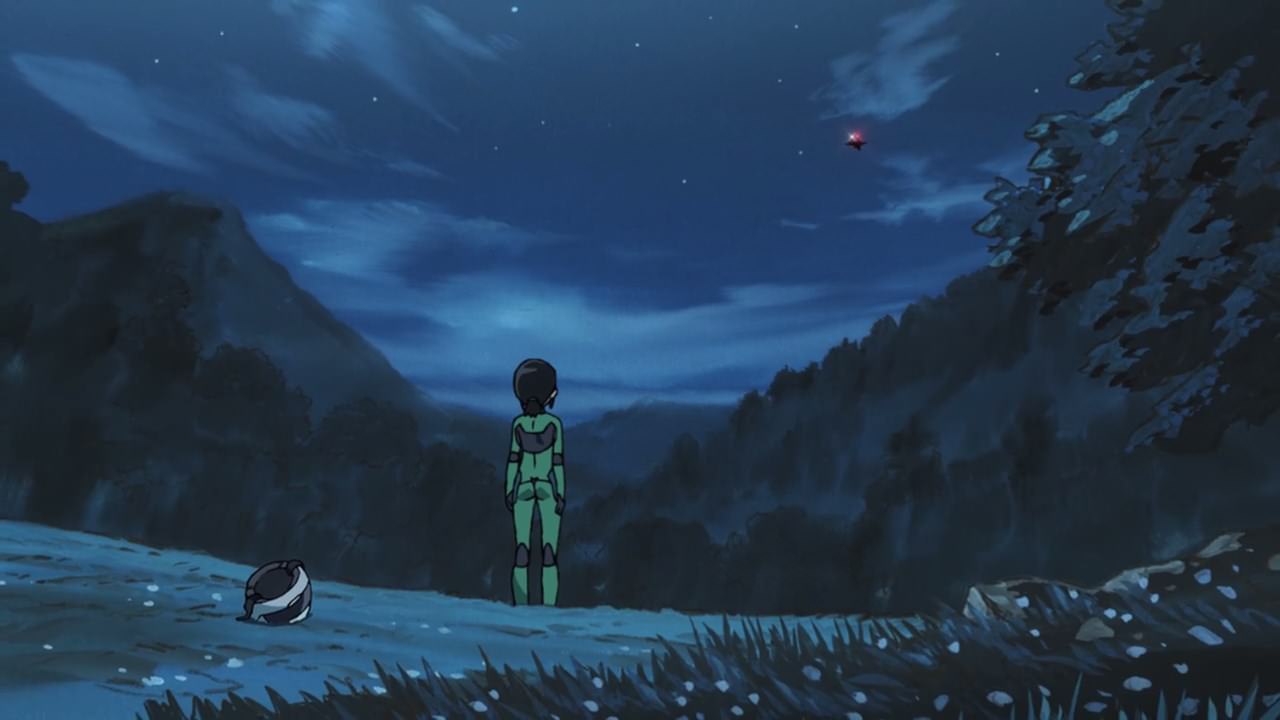 Anyways, looks like all’s well that ends well as Nao Kaizaki has officially becomes a D-Pilot after so many years.

Now the only thing left to do is to have Maso-tan carry Hisone Amakasu back to the air base. Then again, Hisone will just walk back, which is not a good idea! Um Maso-tan, don’t leave Hisone alone.