Darling in the FranXX Episode #15 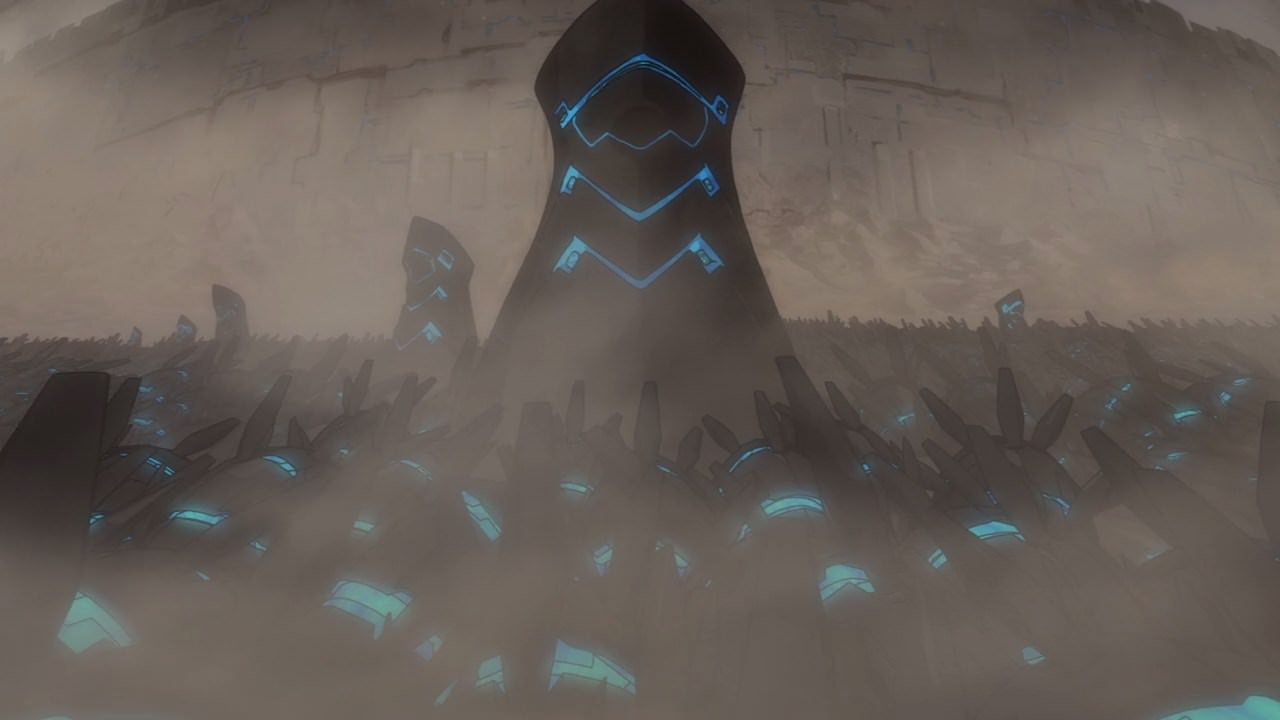 On this week’s episode, Plantation 13’s FranXX Team will partake in a massive mission to reclaim the Gran Crevasse from the klaxosaurs.

This mission will be a turning point for all humanity, but then again I have some doubts on this. 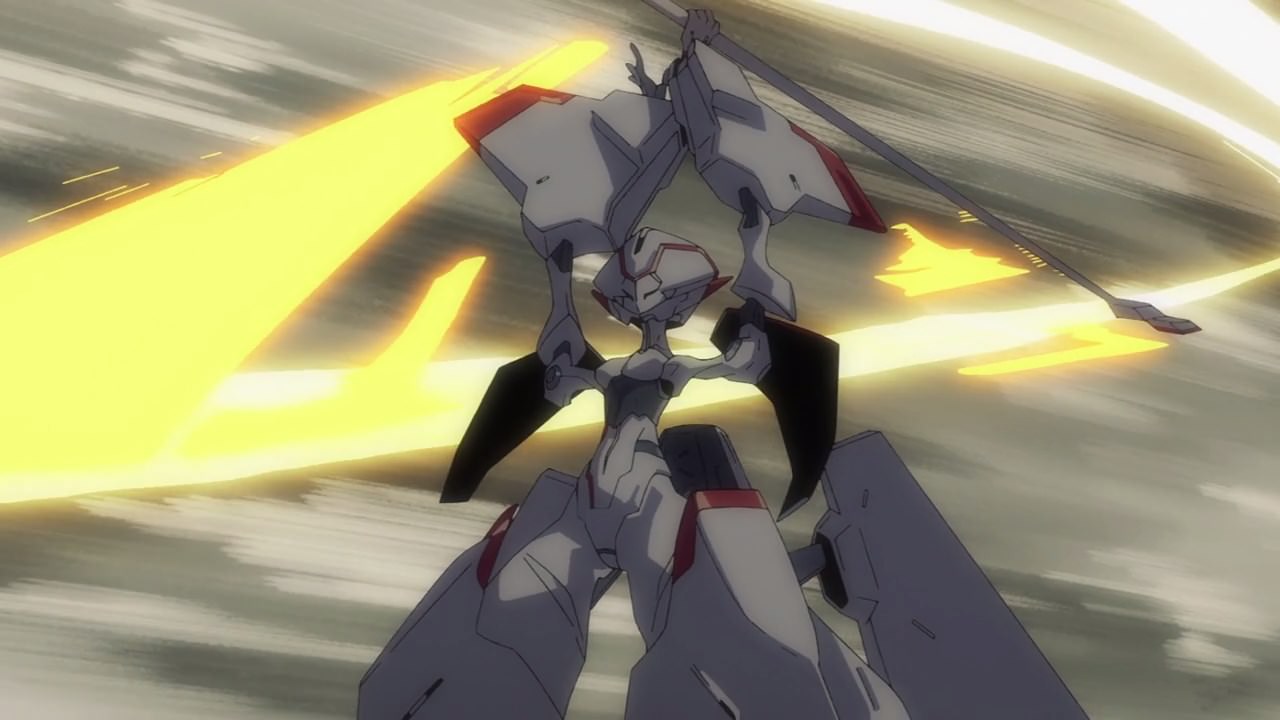 Of course, there are a few people who are capable on carrying out this mission. Case in point, it’s the 9’s as they show that despite having the same FranXX design… 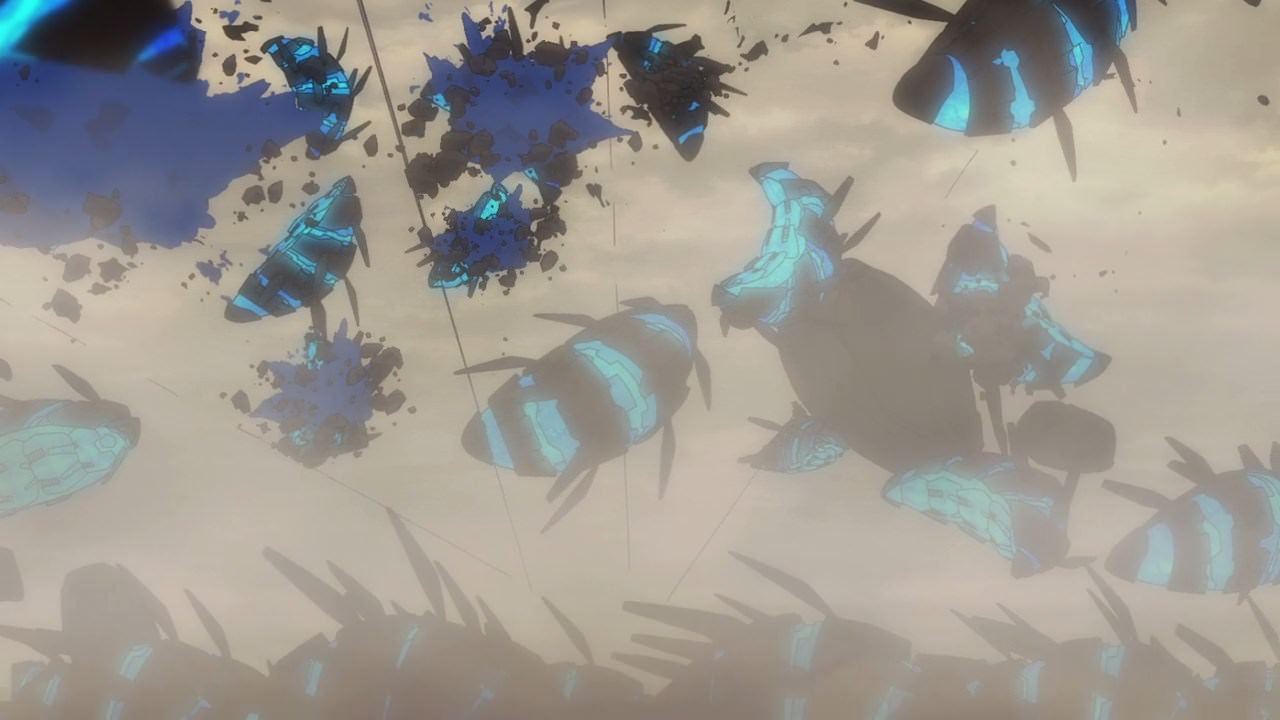 …they’re strong compared to either Plantation 13 or even Plantation 26’s FranXX Team. 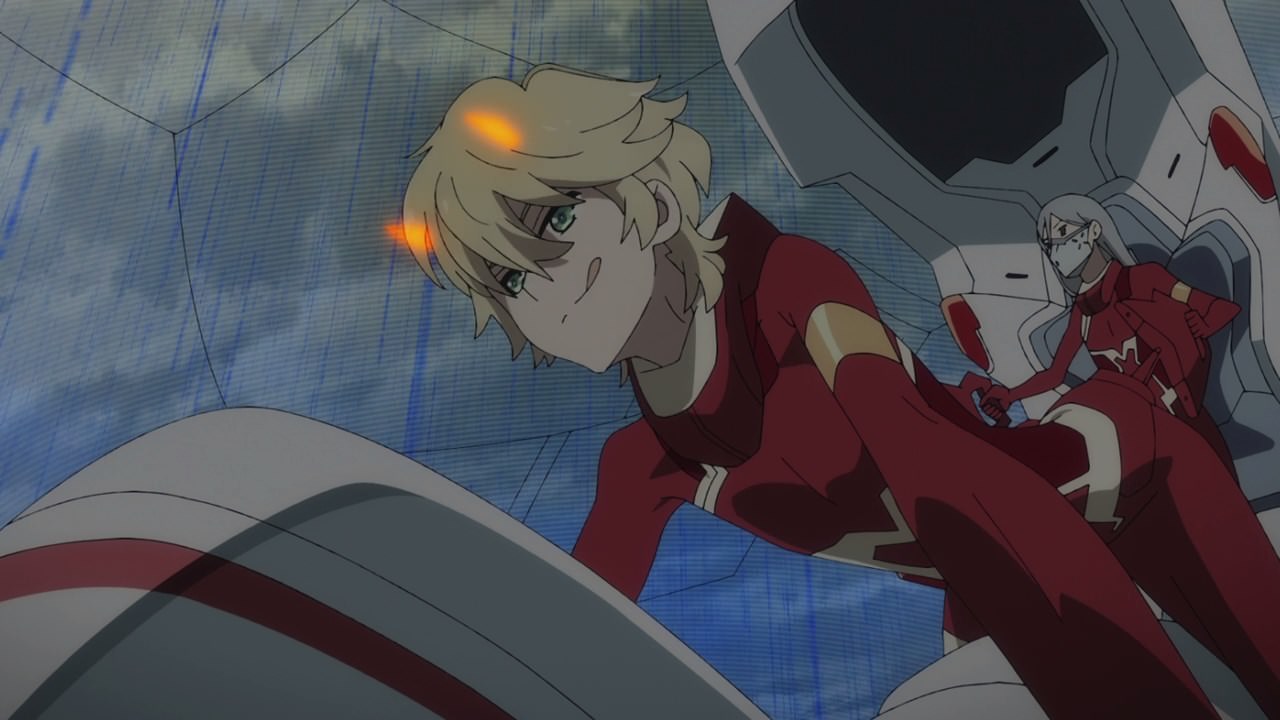 Then again, some of the 9’s like 9’α “Nine Alpha” are powering up the robot while their pistil partners are manning the controls.

Come to think of it, does this position remind you of anything sexual, especially when women takes the lead over men? 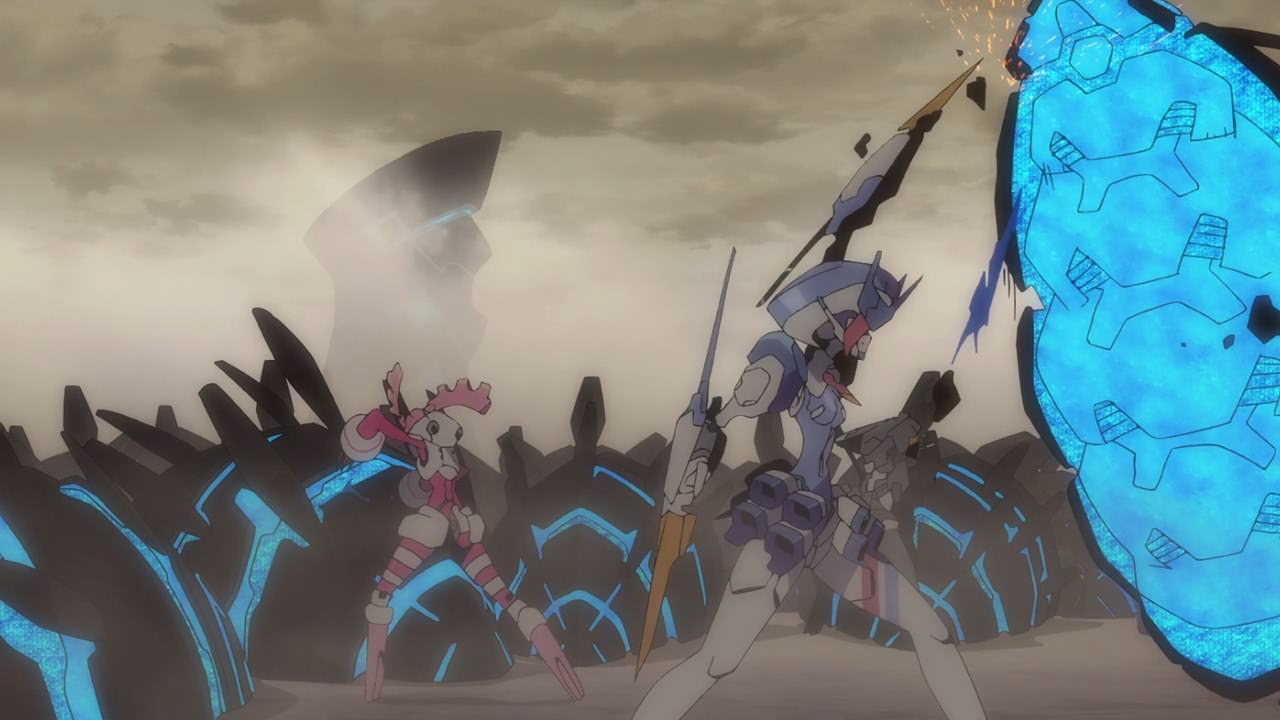 Meanwhile, Code:015 “Ichigo” and the rest are doing fine without Code:016 “Hiro”… or even Code:002 “Zero-Two” for that matter because she’s in another squad.

In any case, this massive mission might take a lot of time to accomplish so I’m hoping that there are no curve balls thrown from the klaxosaurs. 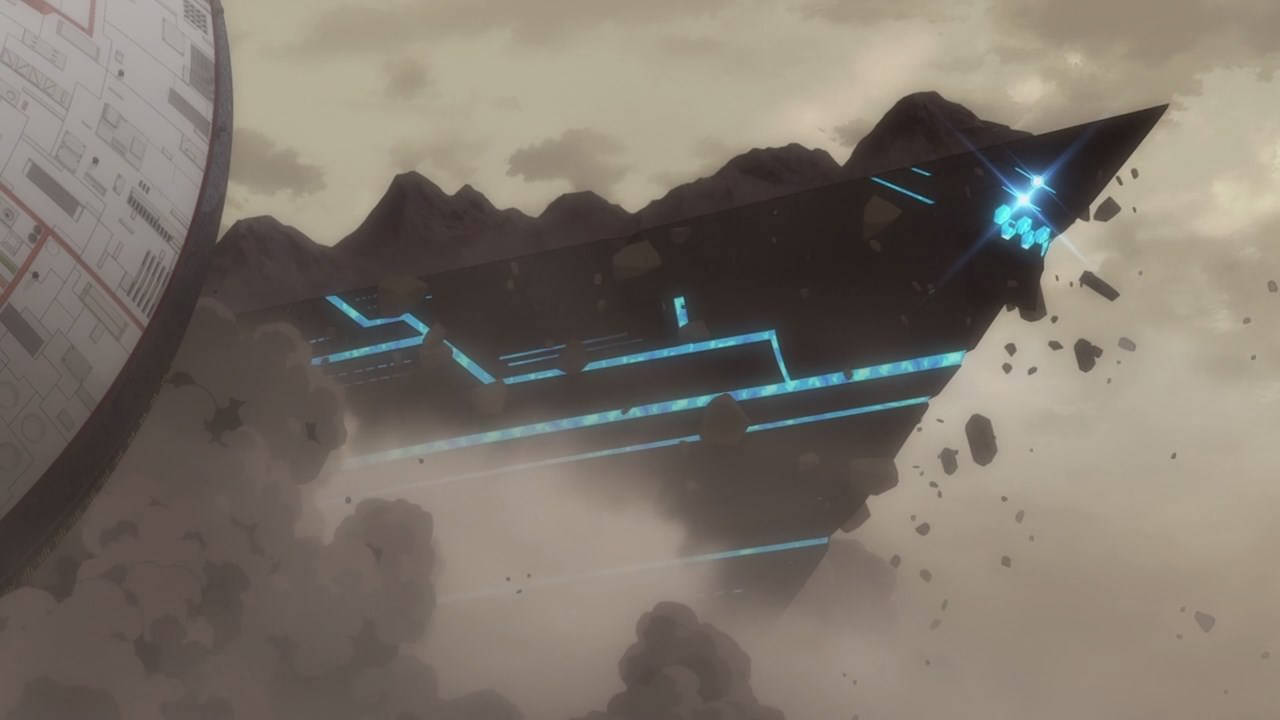 However, it got worse when a Super Lehmann-class klaxosaur appeared from the Gran Crevasse. And I must say that this thing is huge! 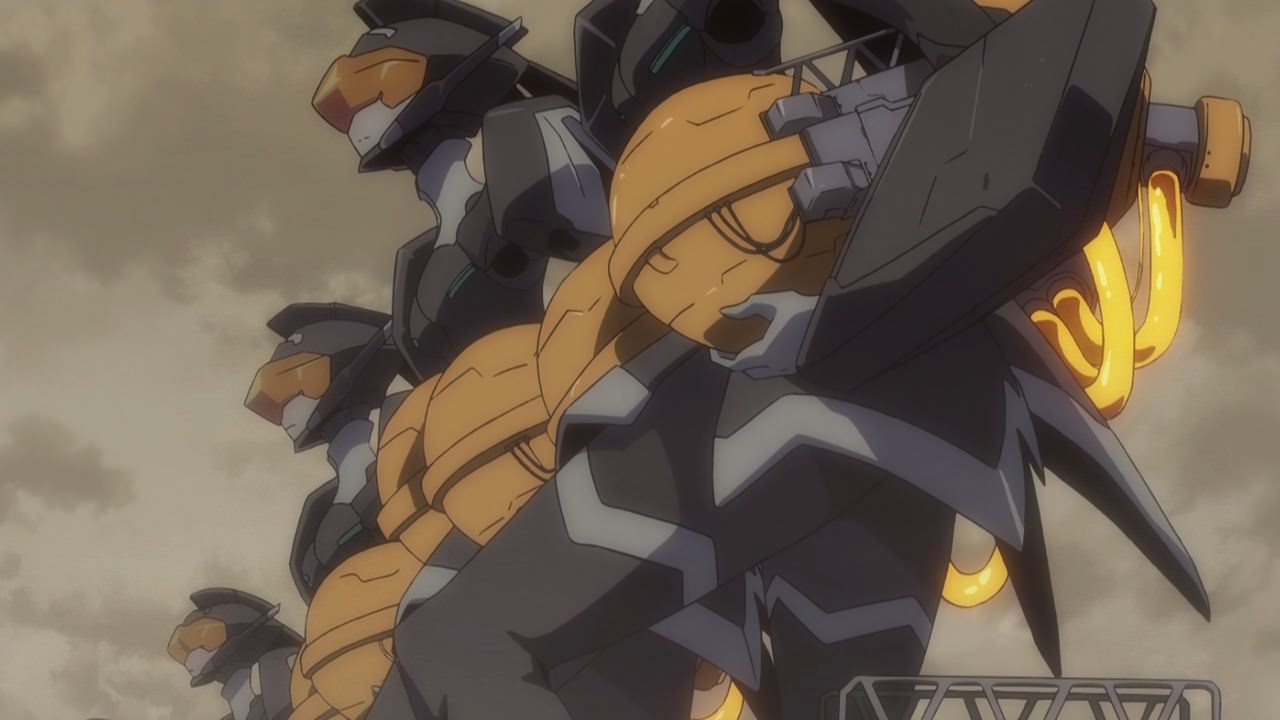 On the other hand, looks like Plantation 26’s FranXX Team will do something different when dealing with a Super Lehmann-class klaxosaur.

What they’re holding is actually explosives. However, they’re not gonna plant the bomb towards the klaxosaur and run away. 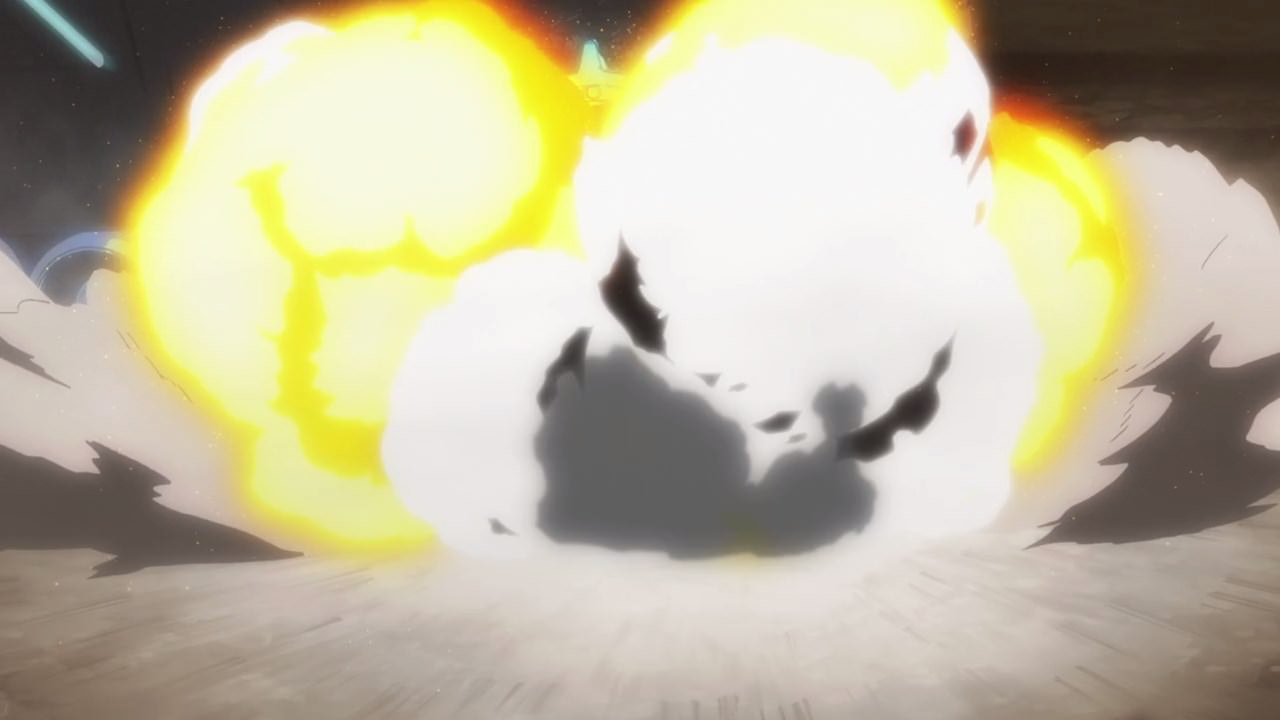 Instead, Plantation 26’s FranXX Team performed a self-destruct sequence by orders from Papa and the council.

Well, we hardly knew these guys and I must say that it’s a proof that Papa don’t care about the parasites’ lives as long as they defeat the klaxosaurs. Even then, it’s not gonna work anyway… 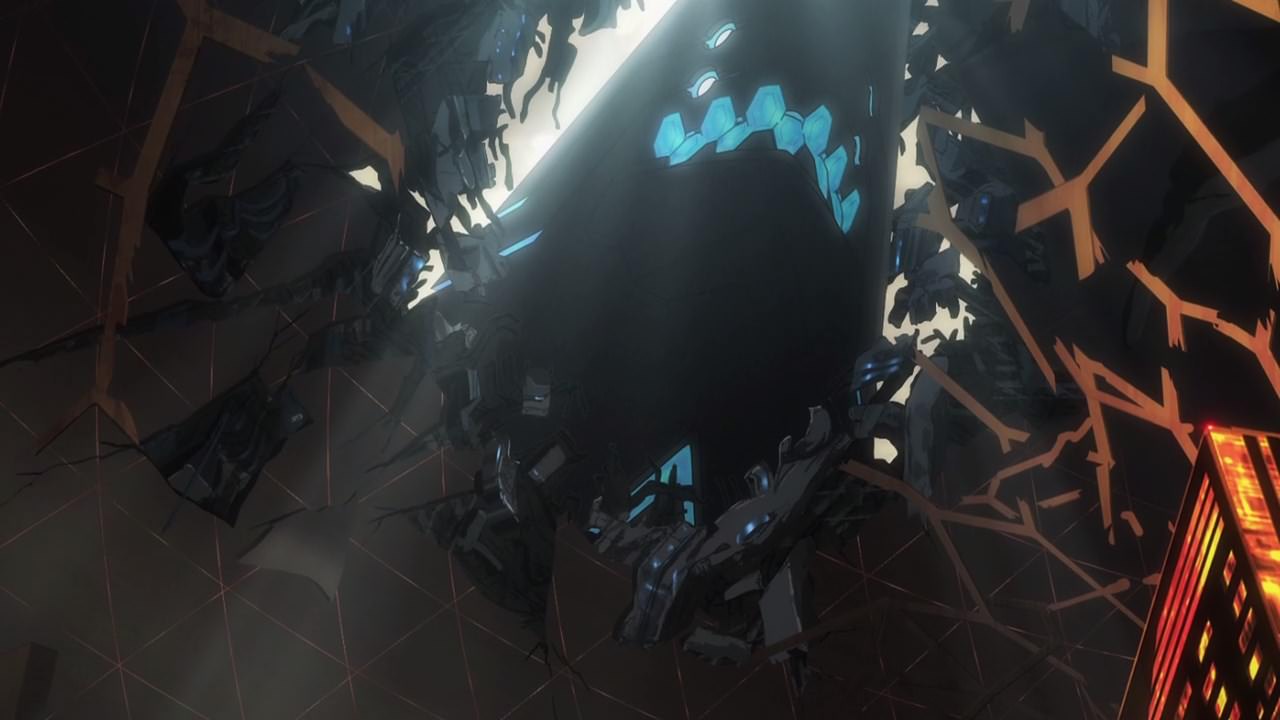 …as the Super Lehmann-class klaxosaur survived and it’s now destroying Plantation 13 and all of its inhabitants. Well, this mission has gone way worse. 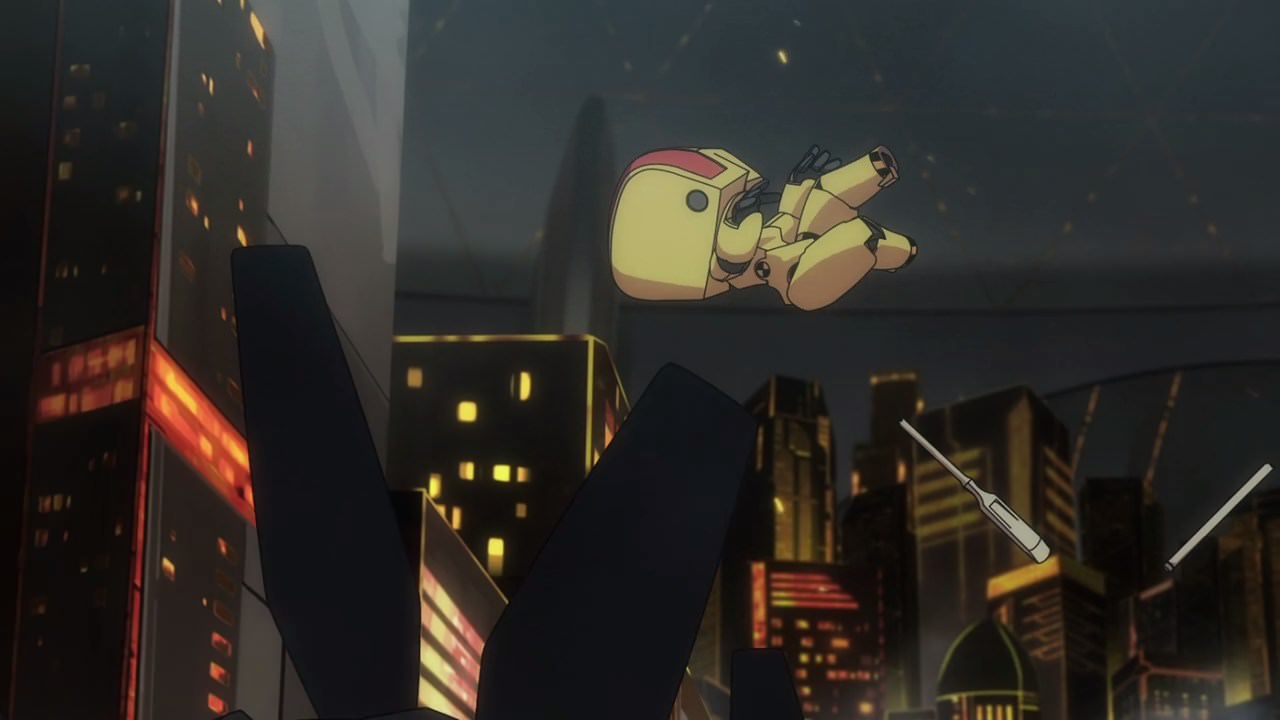 Meanwhile, it appears that someone in a training suit is trying to fight against the klaxosaurs, yet it failed spectacularly as its limbs are torn… 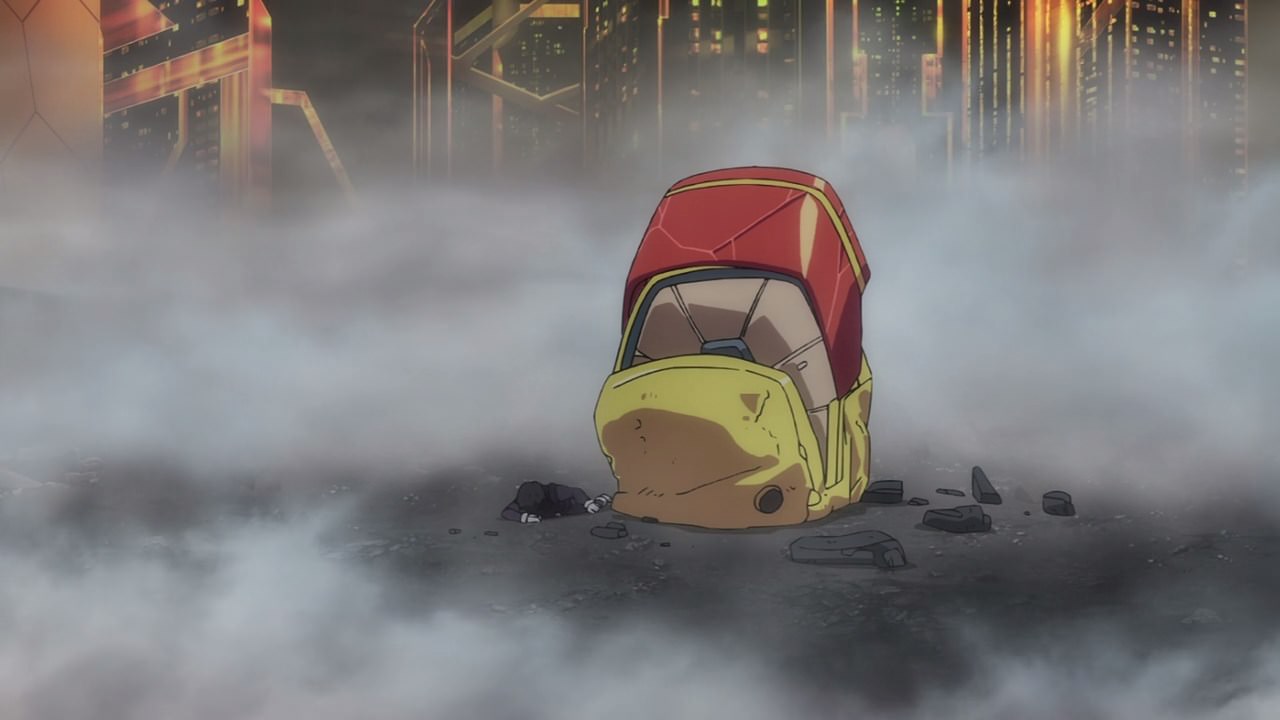 …and its body flung away like a ragdoll. Good thing someone survived as he got out from the training suit. 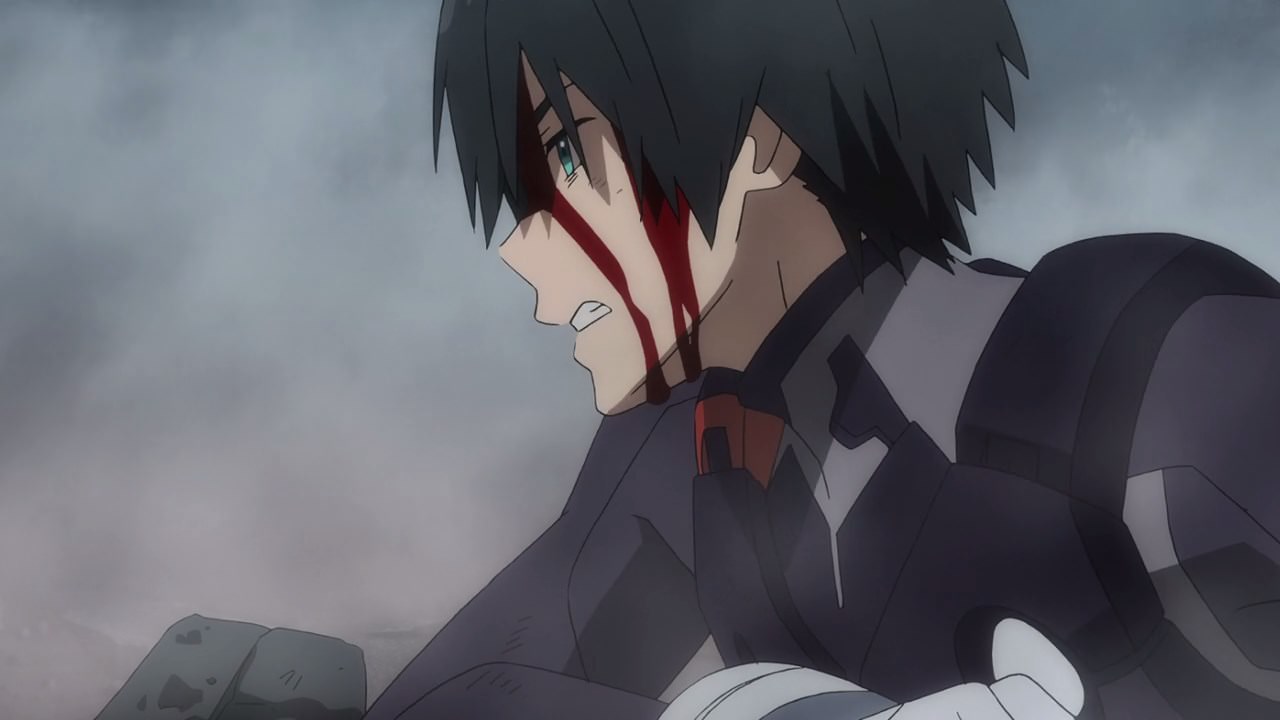 And it’s none other than Code:016 “Hiro” as he decides that he doesn’t want to stay at the sidelines and he wants to see Code:002 “Zero-Two” badly. Well Hiro, I feel ya! 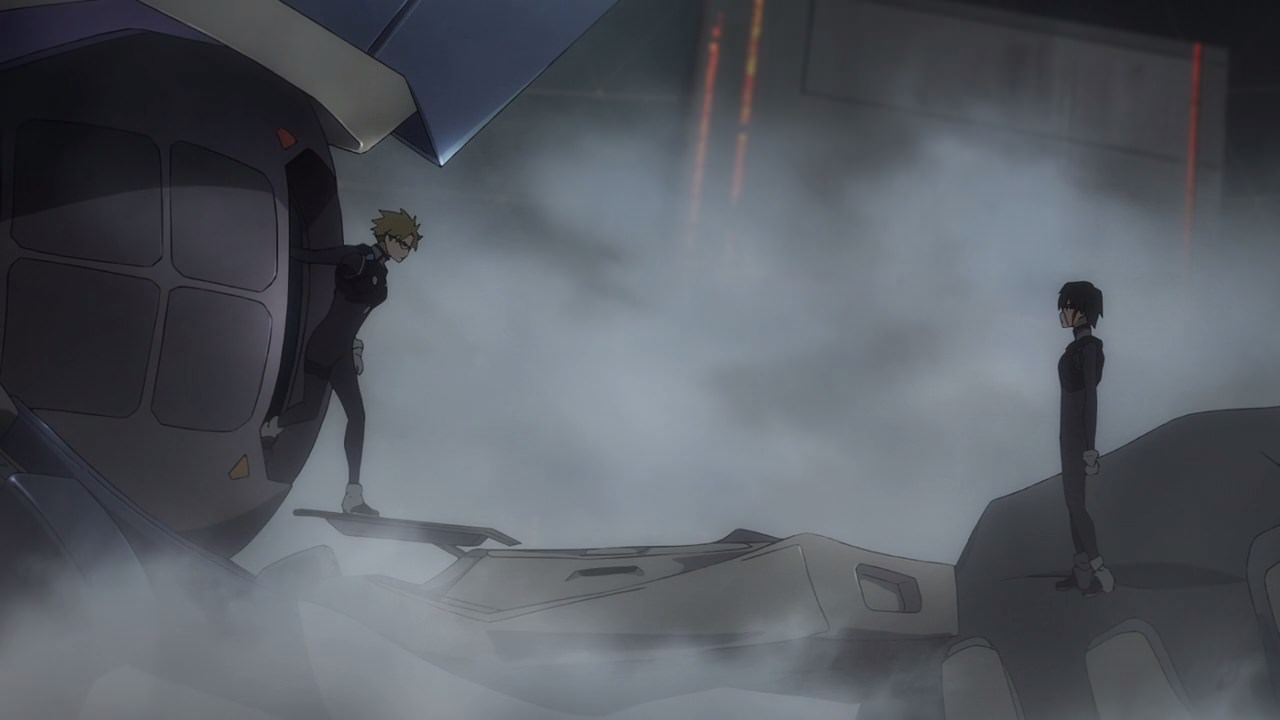 Fortunately, he stumbled upon Code:056 “Goro” where he offered Hiro a ride to find Strelizia and eventually Zero-Two. C’mon, she’s lonely out there.

Of course, Code:015 “Ichigo” might not be happy about this but you know what, I think it’s time for Ichigo to accept that Hiro doesn’t see her as a love interest. 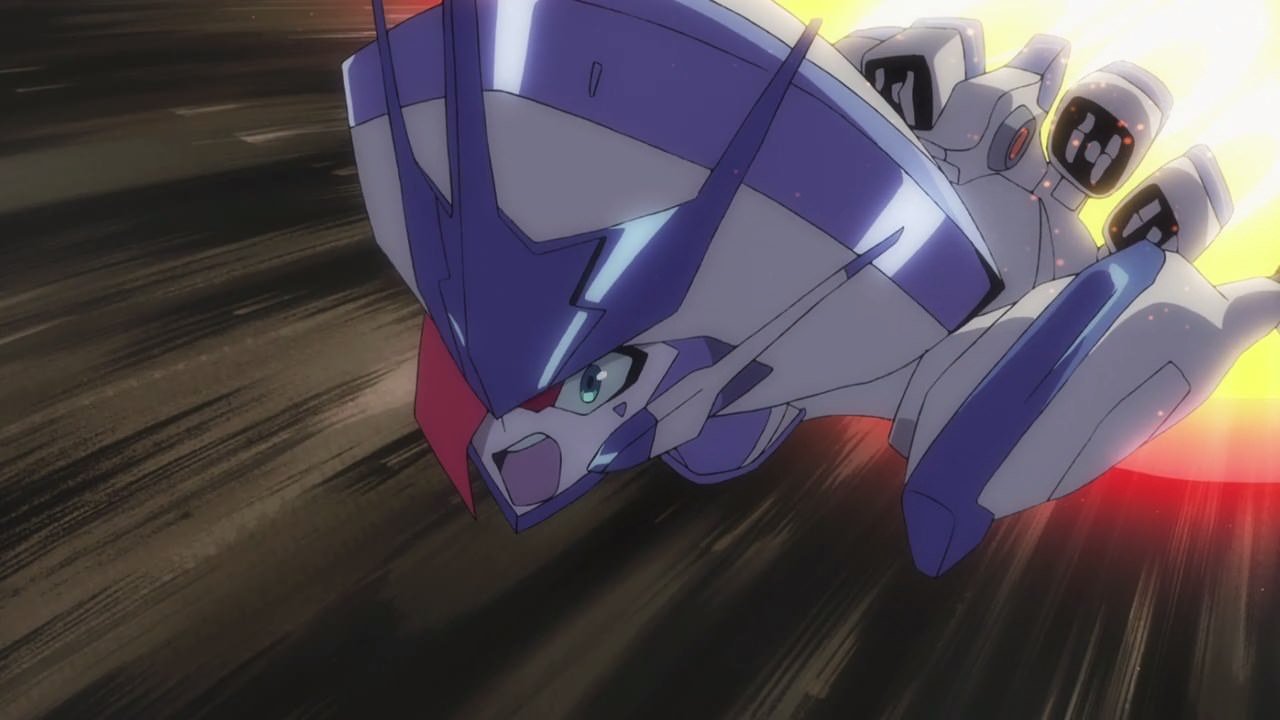 With that said, Ichigo agreed to let Hiro pilot the Delphinium in order to find the Strelizia. 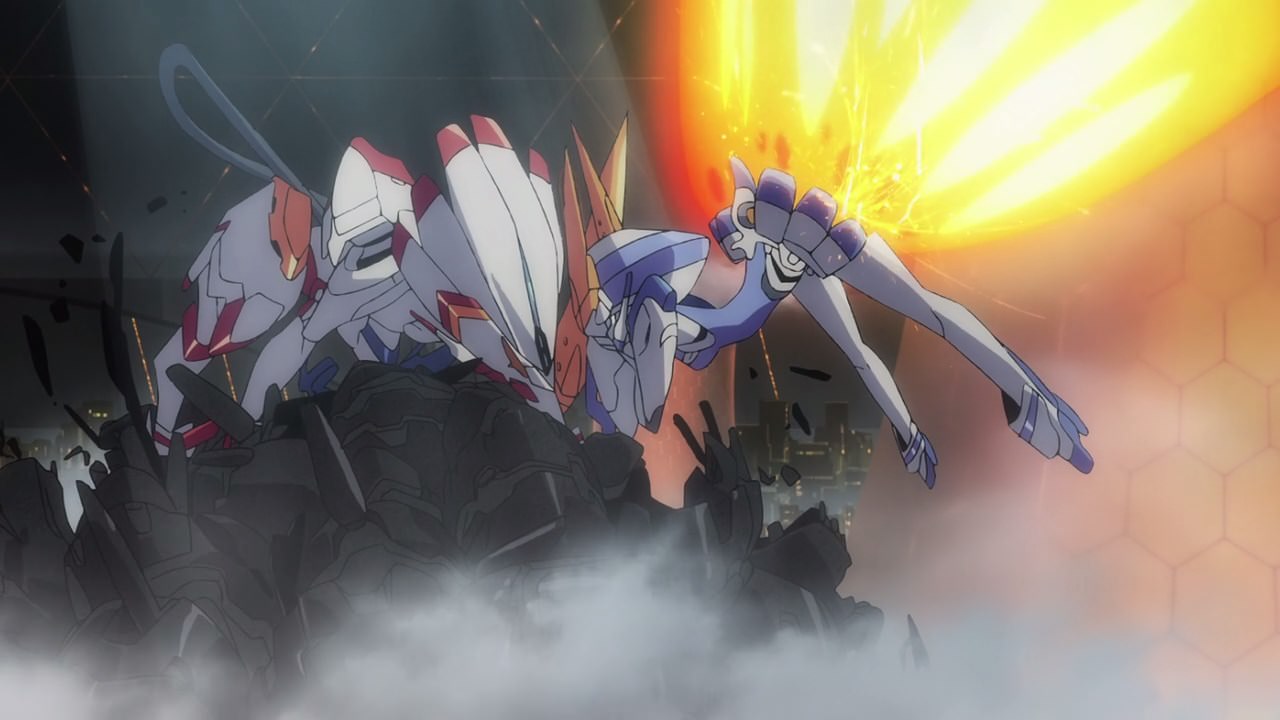 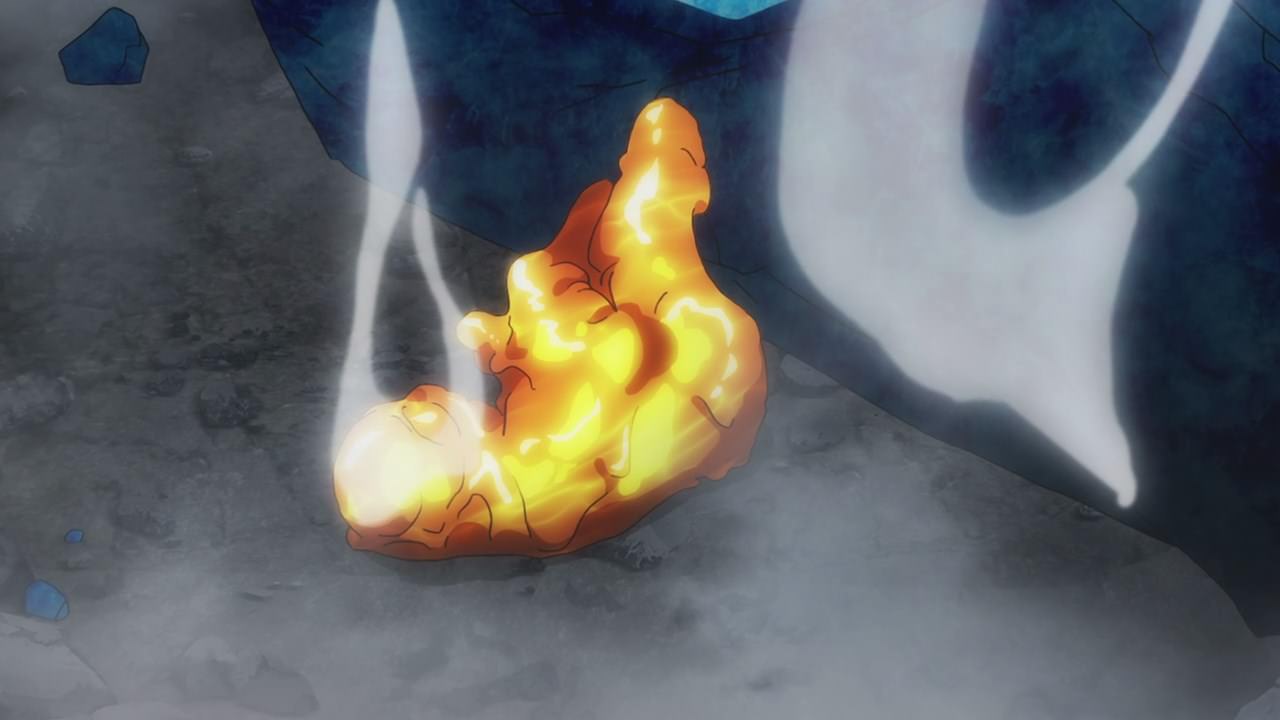 So while Hiro is saving Zero-Two, seems that we have an important discovery regarding the klaxosaurs as its core contains human beings encased in magma.

Hmm, does it remind you of Cross Ange were DRAGONs are actually humans? 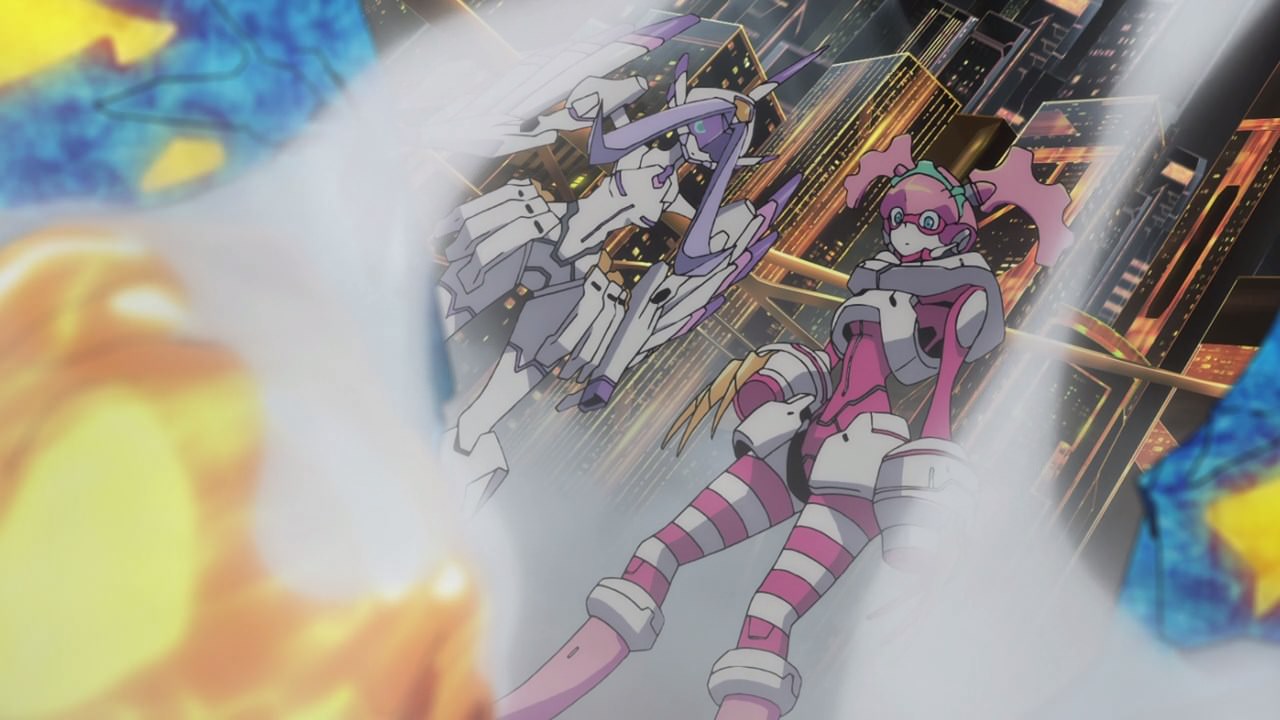 Then again, most of the Plantation 13’s FranXX Team will simply ignore it and continue fighting against the klaxosaurs.

Um guys, this is important because you’re fighting against your kin and your Papa is flat-out lying to you all along! 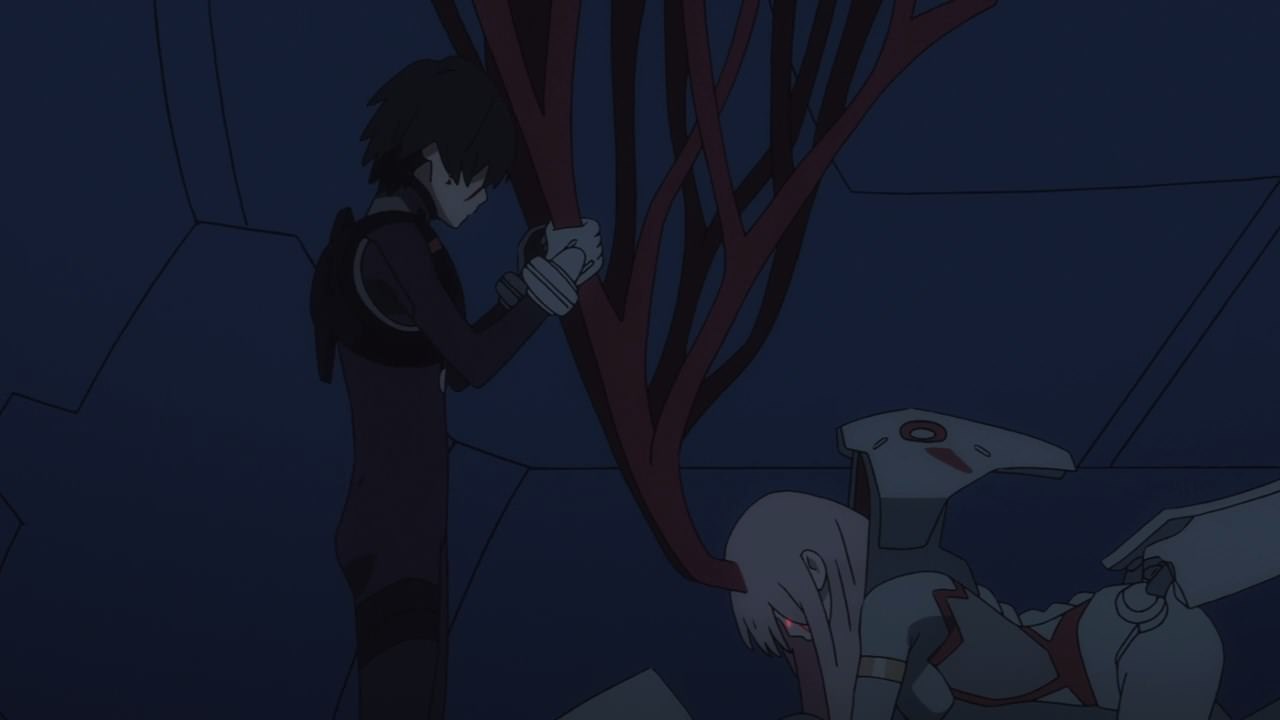 Now let’s go back to Code:016 “Hiro” as he managed to get inside the Strelizia and found Code:002 “Zero-Two” in a horrible state.

I must say that she’s fighting all by herself that Zero-Two is slowly losing her humanity. So, Hiro decided to re-connect with Zero-Two by touching her horns. 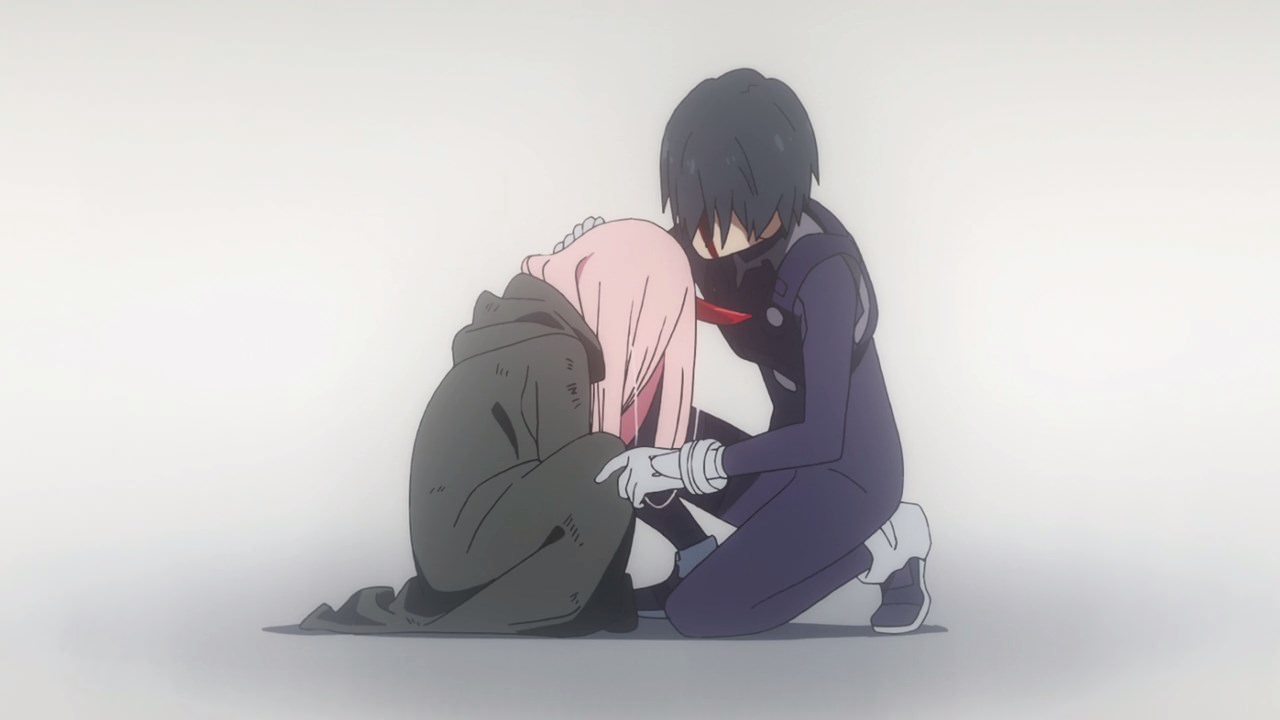 Sure that his memories were altered because APE doesn’t want him to know about Zero-Two’s existence, but he still wants to reconnect with her and explore the outside world together because it doesn’t matter if Zero-Two has klaxosaur blood as long as she has a human heart. 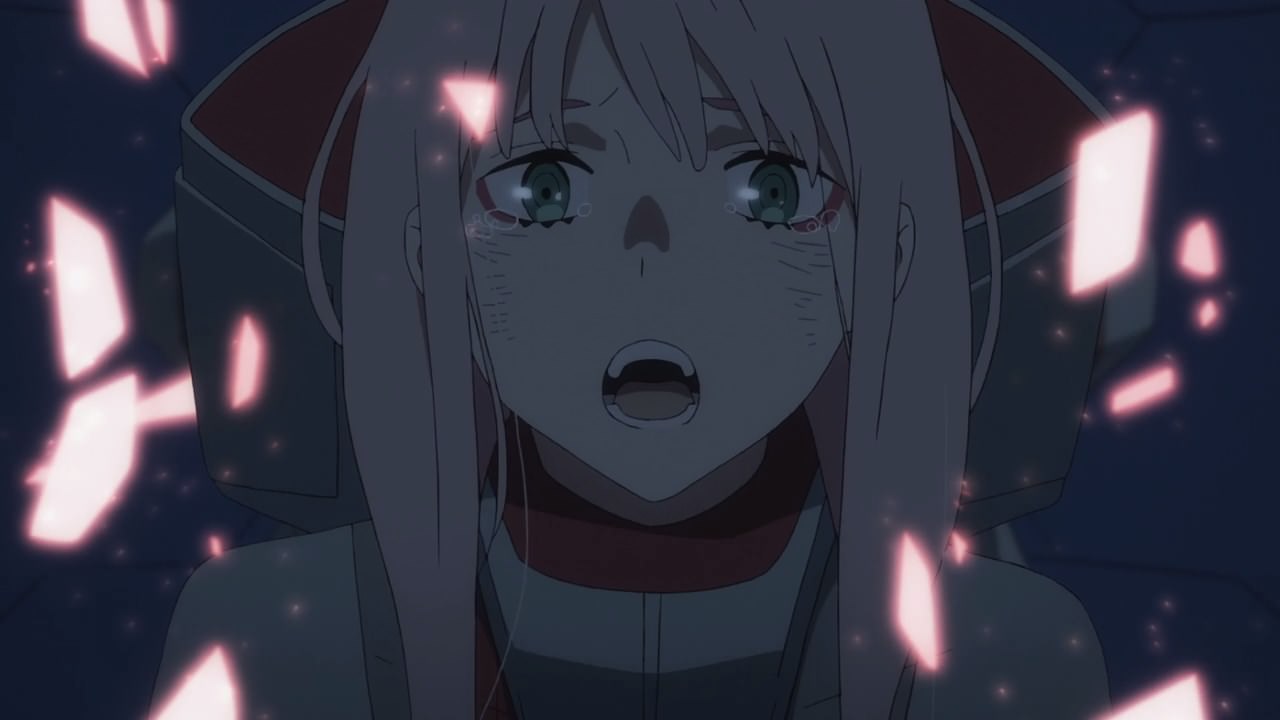 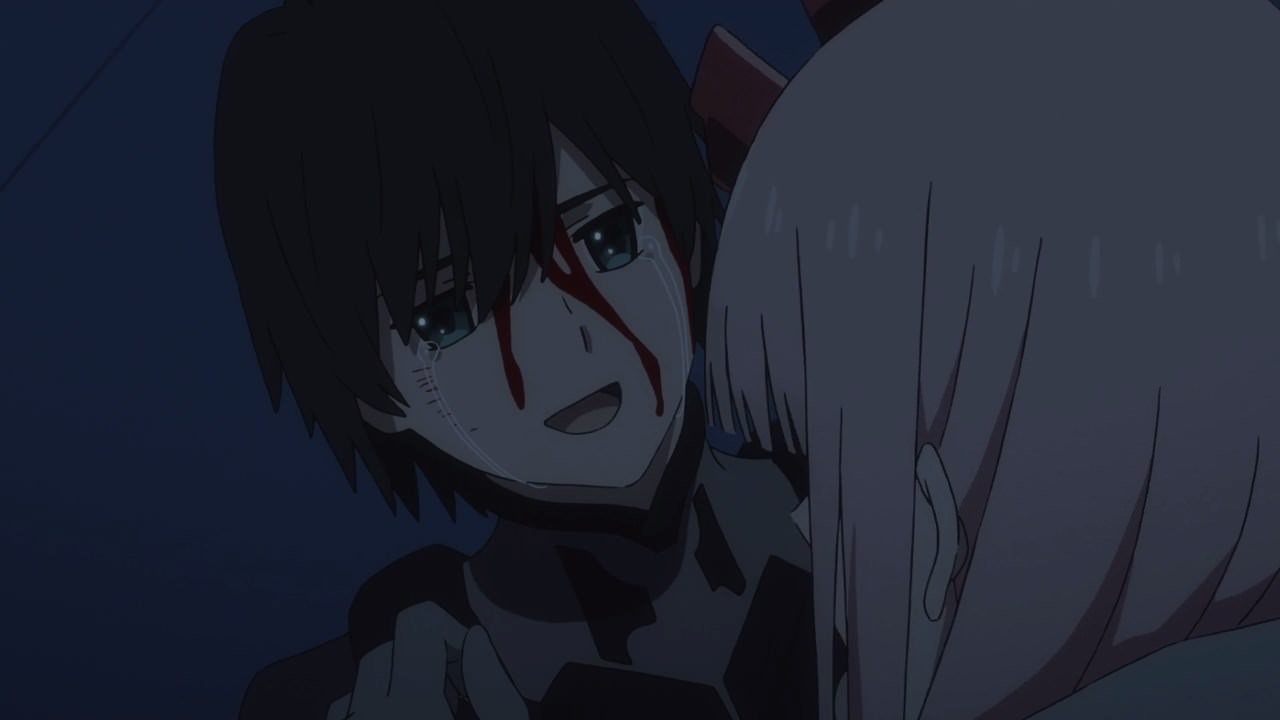 Rather, it’s all thanks to the power of love as Hiro wants to be with Zero-Two forever. Not as FranXX pilots, but intimate partners.

Even though they have some bad times together, both Hiro and Zero-Two will stick together till the end. 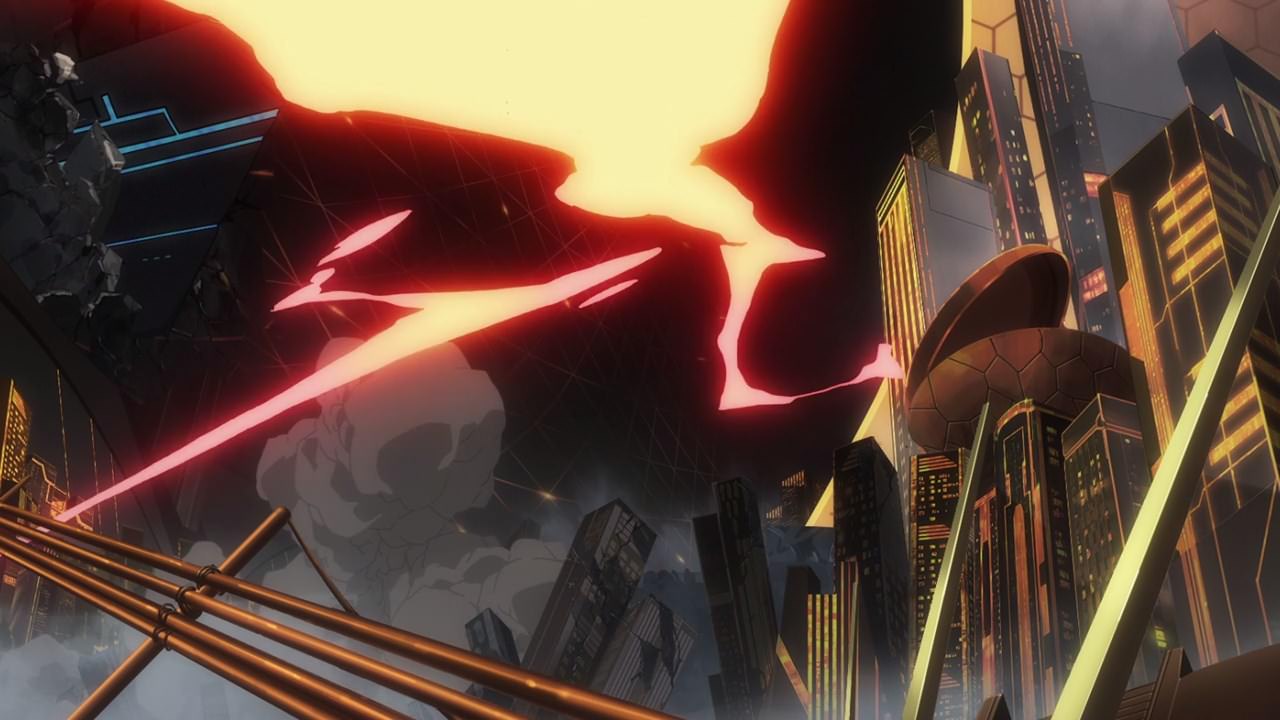 And because of that, there’s a transformation happening inside Plantation 13. It seems that Dr. Franxx was surprised that a new evolution within Strelizia is reached. 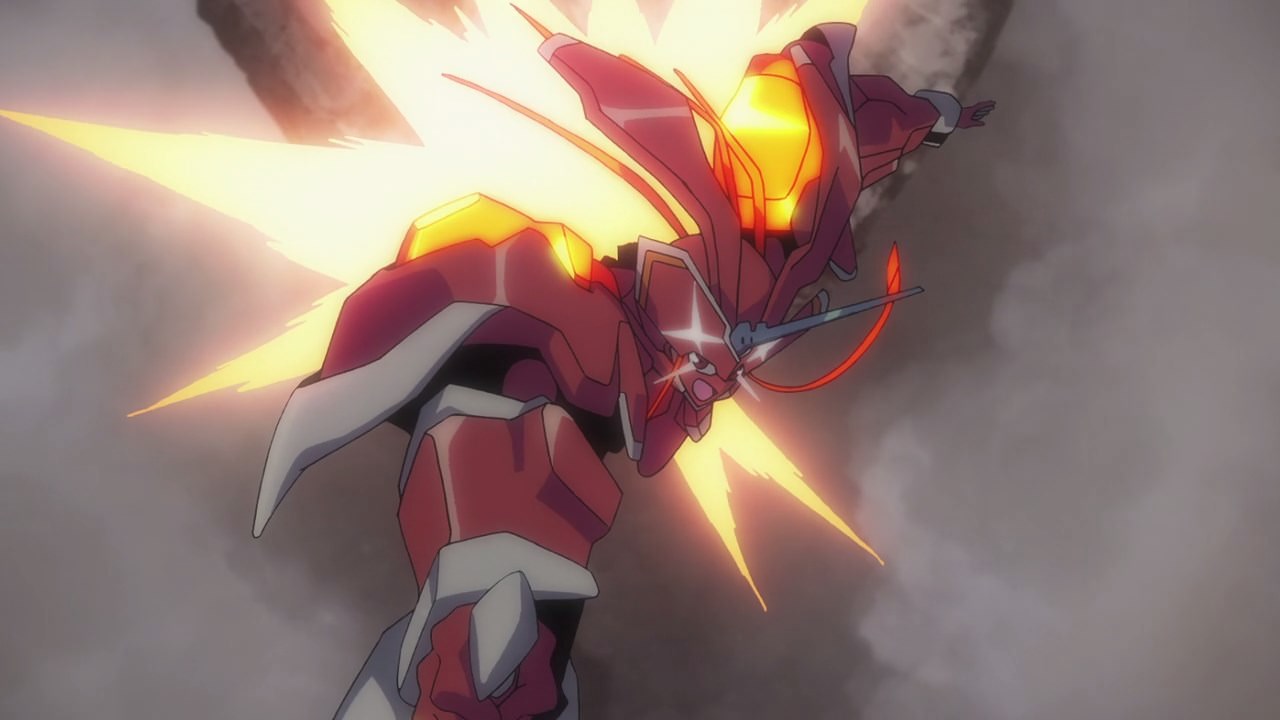 In any case, Strelizia transformed into its humanoid form. This time, it’s colored red to match Zero-Two’s red suit from earlier episodes. Oh, and to match her previous red klaxosaur skin too. 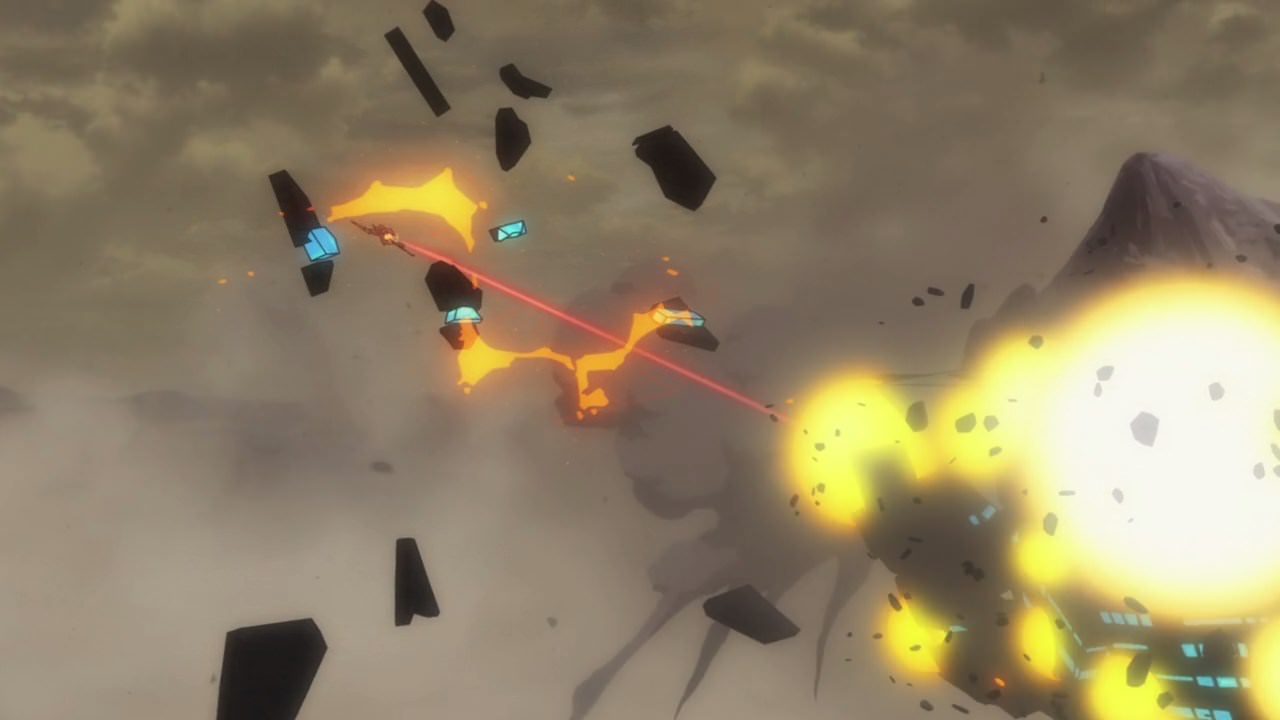 With that said, both Hiro and Zero-Two managed to destroy the Super Lehmann-class klaxosaur in a single thrust. By the way, that’s a sexual joke… and a lame one. 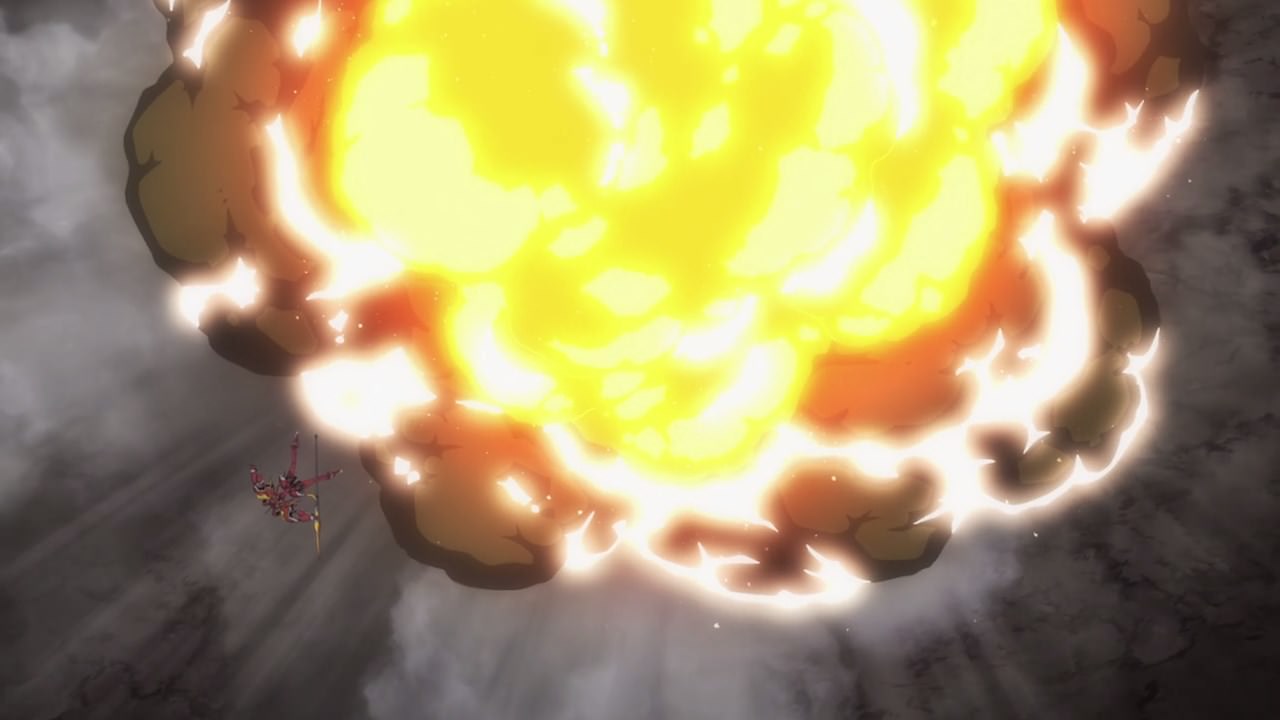 Eventually, they managed to reclaim the Gran Crevasse after defeating the Super Lehmann-class klaxosaur. I’m so happy that the power of love between Hiro and Zero-Two overcome the odds and not only that, but the whole Plantation 13’s FranXX Team recognized their union (except for Ichigo in which she’s salty about it).

With that said, it’s mission accomplished and even though many lives were lost, humanity has finally gained leverage over the klaxosaurs. Now all that’s left to do is to destroy the core and call it a day. 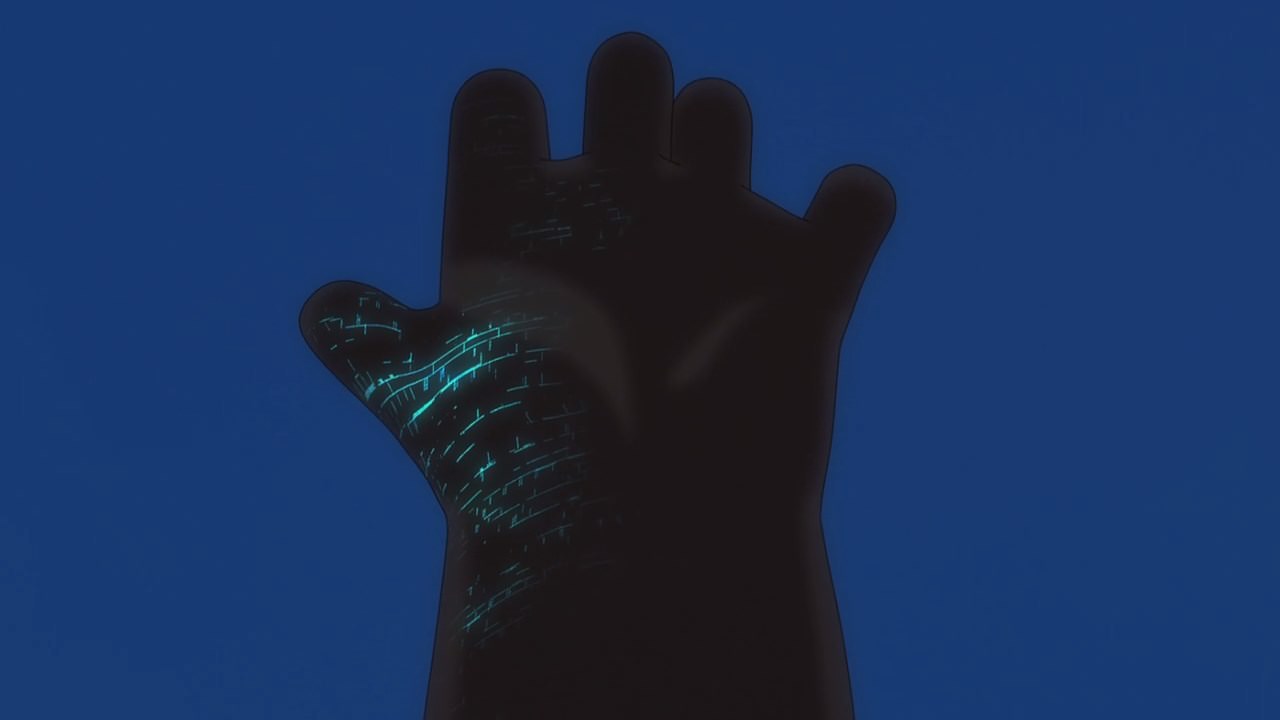 But then, a giant hand appeared out of nowhere and it’s about to swat everything. 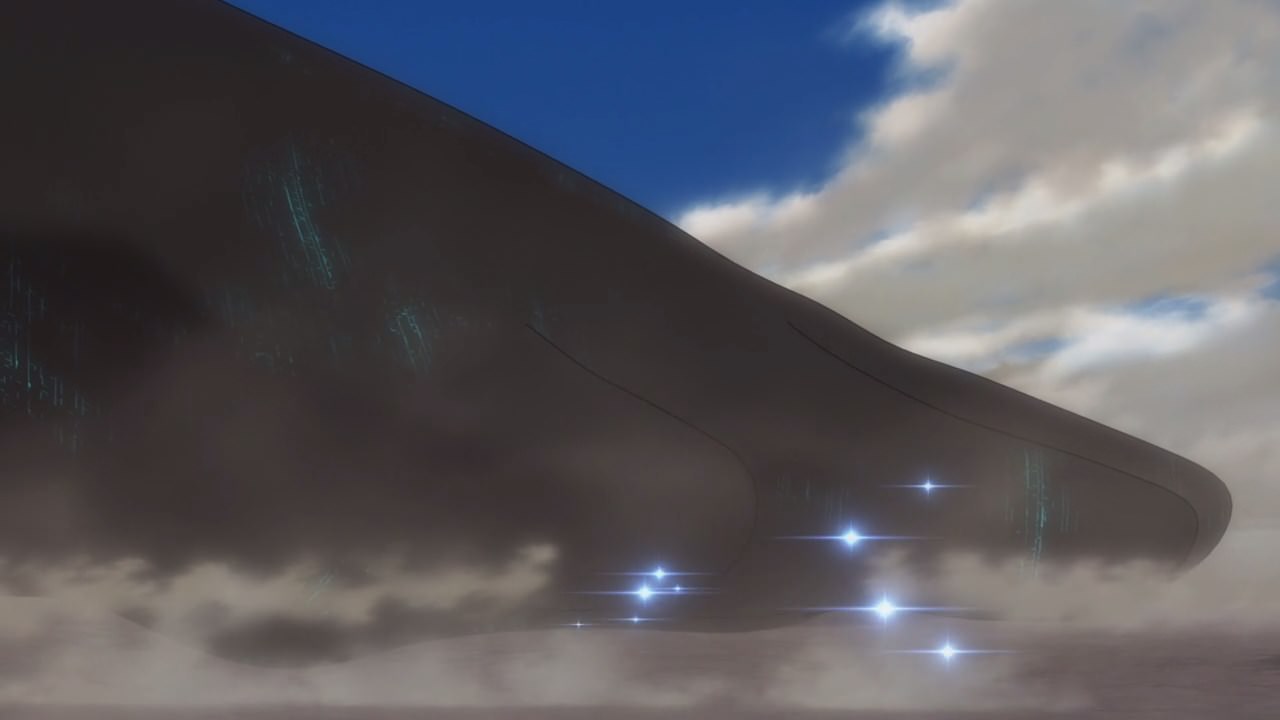 This includes the core of the Super Lehmann-class klaxosaur, Plantation 13, everything in one fell swoop. At this point, this might be the end of this show indefinitely! 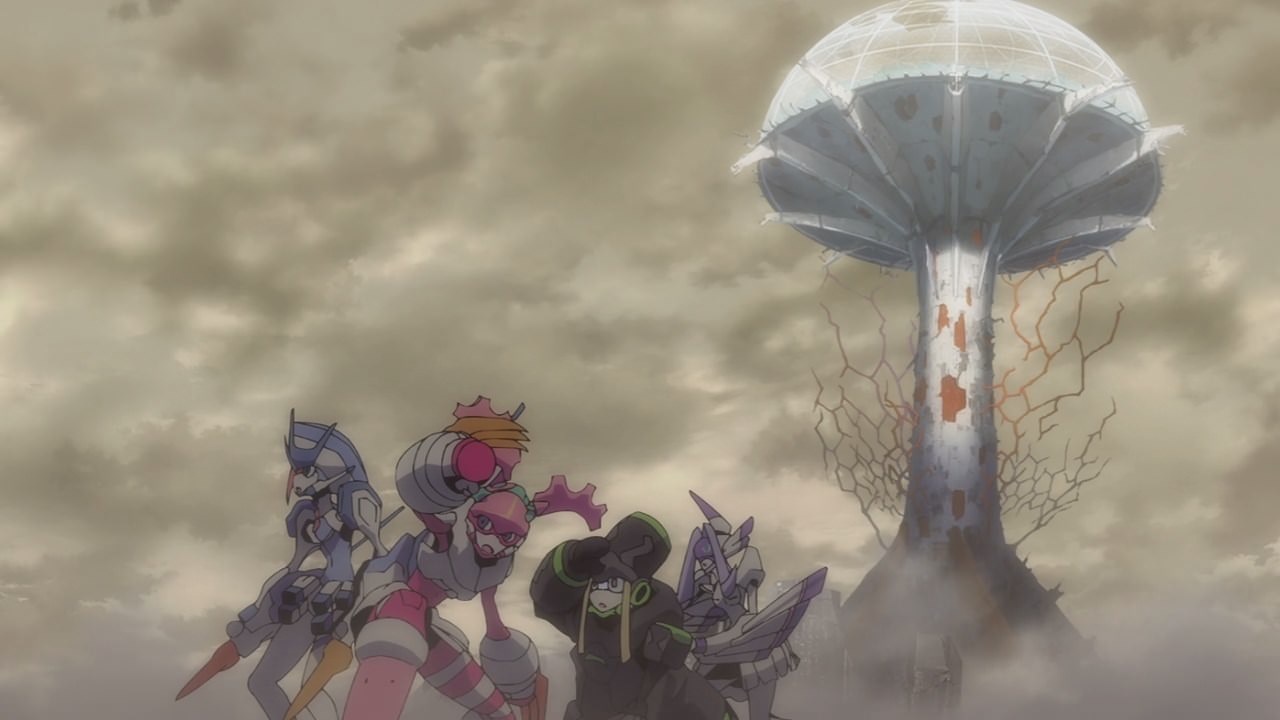 But strangely enough, the remaining 4 FranXX from Plantation 13 survived. What’s going on here and where’s both Hiro and Zero-Two?

Anyways, that’s the end for this epic episode and man, so many things happened from Hiro reconnecting to Zero-Two to the revelation that the klaxosaur are actually humans. Hmm, now I have a feeling that Papa and the council are actually the bad guys, yet we still don’t know what happened to them.

With that said, I’ll see ya next time and I have to say that there’s gonna be more answers next week.

1 Response to Darling in the FranXX Episode #15