Let’s start this episode with Issei Hyoudou getting flirted with Xenovia Quarta, although Xenovia is just saying that she can’t use her Durandal right now. Yeah, we can’t forget that he’s aiming to be the Harem King and also, it’s nice to hear Risa Taneda’s voice again.

With that said, it’s time for Kuoh Academy’s school trip in Kyoto, which is Rias Gremory’s favorite place in Japan. C’mon, she loves everything Japanese!

But first, let’s talk about Issei going inside to the collective conscience of past Ddraig users after Ajuka Beelzebub tweaking his evil pieces. Oh, and if you’re talking about the time when Ajuka did that back in Highschool DxD BorN? Let’s just say that some viewers felt that it didn’t happen. But you know what, if you wish to have an accurate anime adaptation of Volumes 5 to 8, give Passione and Kadokawa some money and they’ll deliver it as OVA episodes.

Now I’m done with my rambling, let’s go back to what’s happening right now as Issei Hyoudou couldn’t talk to the past Ddraig users as they’re filled with despair after using Juggernaut Drive.

That’s until he met Elsha, the most powerful female Ddraig user who was interested in Issei after donning the title of Oppai Dragon, much to Ddraig’s woes.

Oh yeah, aside from having big tits, Elsha is here to give you something to the current Red Dragon Emperor…

…which turned out to be a box from one of the strongest Ddraig users named Belzard, who managed to defeat Albion twice in his lifetime.

Oh yes, this box contained something that’ll drastically strengthen Issei Hyoudou in the future… if he has a stronger resolve that is. Of course, the hint is already there if you’ve watched the finale of Highschool DxD BorN.

Now then, let’s go back to Kyoto where the 2nd year students are enjoying the marvelous sites of the old capital. Heck, they even buy souvenirs too.

But anyways, Irina Shidou, Asia Argento, and Xenovia Quarta are having fun at Kyoto, even though the last two are devils. But that’s okay because they have a special permit.

As for Issei Hyoudou, he prays for the shinto gods to grant his wish of becoming the Harem King. Well, at least he didn’t get a headache because it’s okay to pray for various gods in Shintoism.

However, it seems that he was interrupted when Kunou arrived, accusing Issei of stealing her mother Yasaka away.

Um Ms. Kunou, I don’t think Issei Hyoudou kidnap Yasaka since he and his friends have just arrived in Kyoto. Oh well, seems that she can’t accept any explanation from a devil.

Anyways, Issei and his harem have no other choice but to fight against Kunou and her youkai friends, although they’re not gonna kill them nor destroy any surroundings. 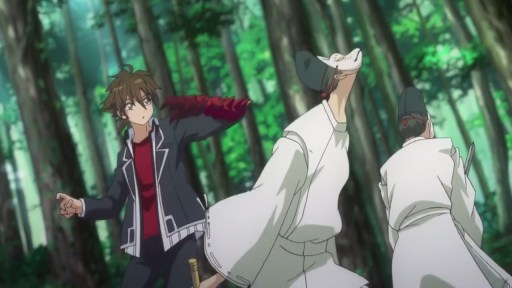 With that said, they managed to get away from Kunou’s henchmen by knocking them out cold. It’s better than killing them off or they might get in trouble.

Now let’s move onto the next scene where Rossweisse forbids Issei to go to the girls’ bathroom.

But that’s okay for Issei because he’ll do anything to get past to the promised land full of naked ladies. Well, good luck to him ’cause Rossweisse ain’t a pushover… 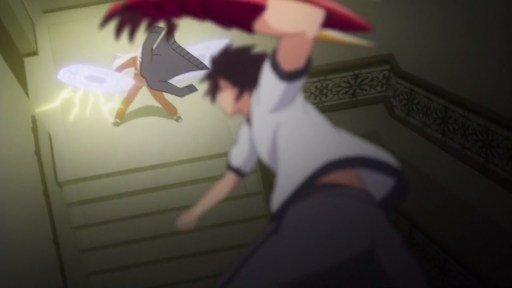 …especially when Issei pushed her berserk button which Rossweisse doesn’t like to be called a valkyrie without a boyfriend.

Well, that was sad but Issei won’t hold back when his desires are tingling right now.

In fact, he got behind on Rossweisse and perform a Dress Break on her. Well, looks like this valkyrie let her guard down.

Oh, and it seems that Rossweisse has some lovely boobies that Issei-kun loved it at first sight. Glad that he performed a Dress Break on her.

But for Rossweisse, she’s embarrassed and frustrated that her tracksuit got completely ruined and it costs 980 yen. Oh, and she can’t get married anymore because her naked body was seen by Issei Hyoudou.

But you know what, Issei will just add Rossweisse to his harem anyway but for now, he needs to graduate high school first and become stronger! Oh yeah, feel free to open the pic for the full view.

Back at the Gremory household, seems that Akeno Himejima is curious on Rias Gremory’s breasts. Even though her tits are bigger, Akeno felt that Issei gets stronger when he pushes Rias’ tits.

So, Akeno tries to find out by fondling Rias’ breasts. But here’s the thing, Rias Gremory’s breasts are very sensitive compared to Akeno Himejima so yeah, it’s no wonder why she’s being called as the Switch Princess!

As for Koneko Toujou, seems that she’s full of envy as her breasts haven’t grown yet. But you know what, Koneko’s chest will eventually grow as she gets older. 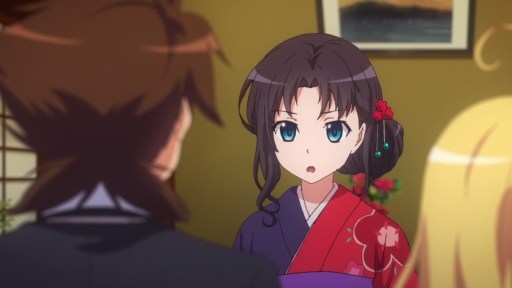 Lastly, here’s Serafall Leviathan as she’s here at Kyoto for an important meeting with various youkai in Kyoto.

Of course, Serafall is alarmed that the leader of the youkai Yasaka went missing and she suspects that the Khaos Brigade is behind it. 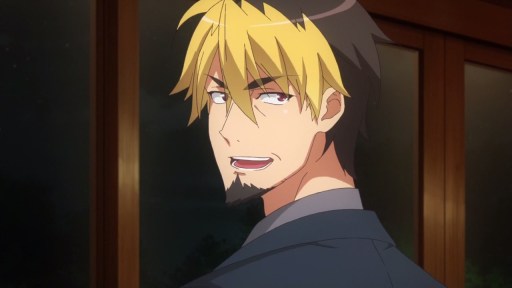 However, Azazel told Issei and his friends that there’s nothing to worry about as he and Serafall will take care of it. Sure that Azazel wants them to enjoy the school trip, but the Occult Research Club and the student council can’t afford to lower their guard down.

With that said, looks like things are about to heat up on the next episode as I have a feeling that the ones who are responsible for kidnapping Yasaka will appear. Maybe that guy with the staff at the end of Episode 0 will make his entrance together with his posse, so I can’t wait for that next week!