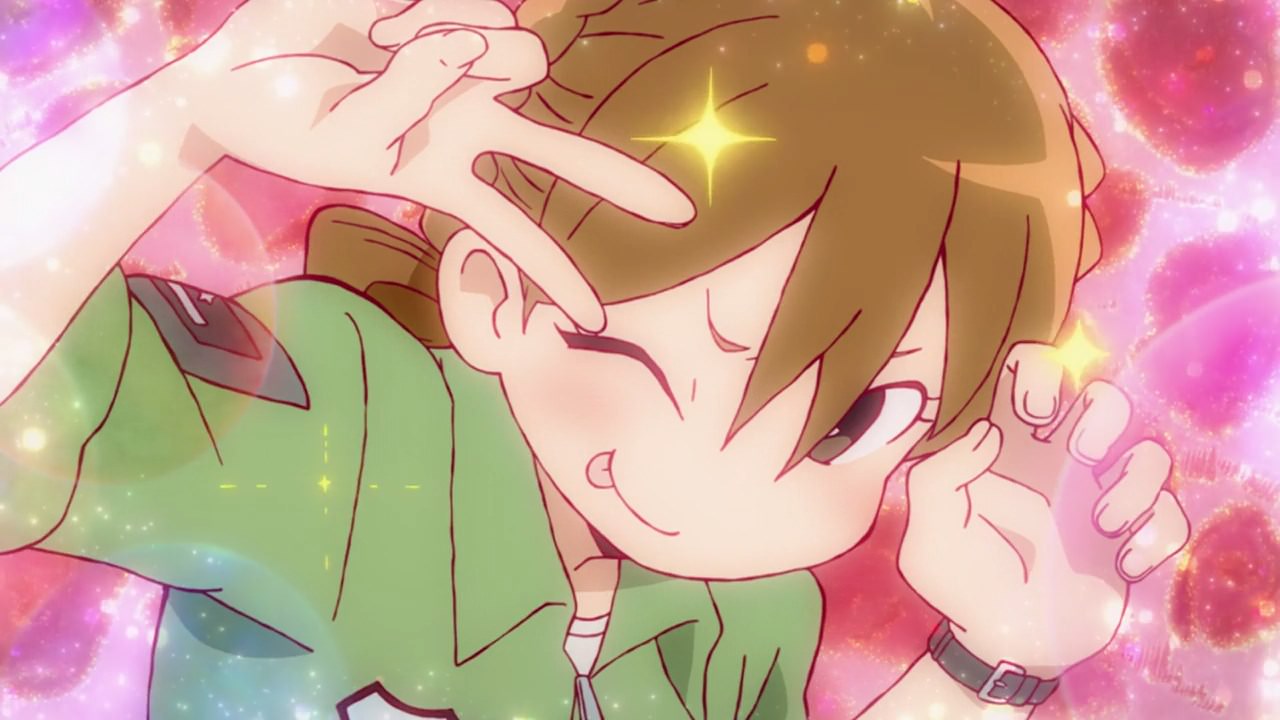 Here’s Nao Kaizaki as she’s trying to come up with a cool TAC name, like “Sexy Jaguar” for example complete with a ridiculous face that everyone might laugh at her.

Then again, Nao-san’s TAC name might be the most embarrassing one she came up with! 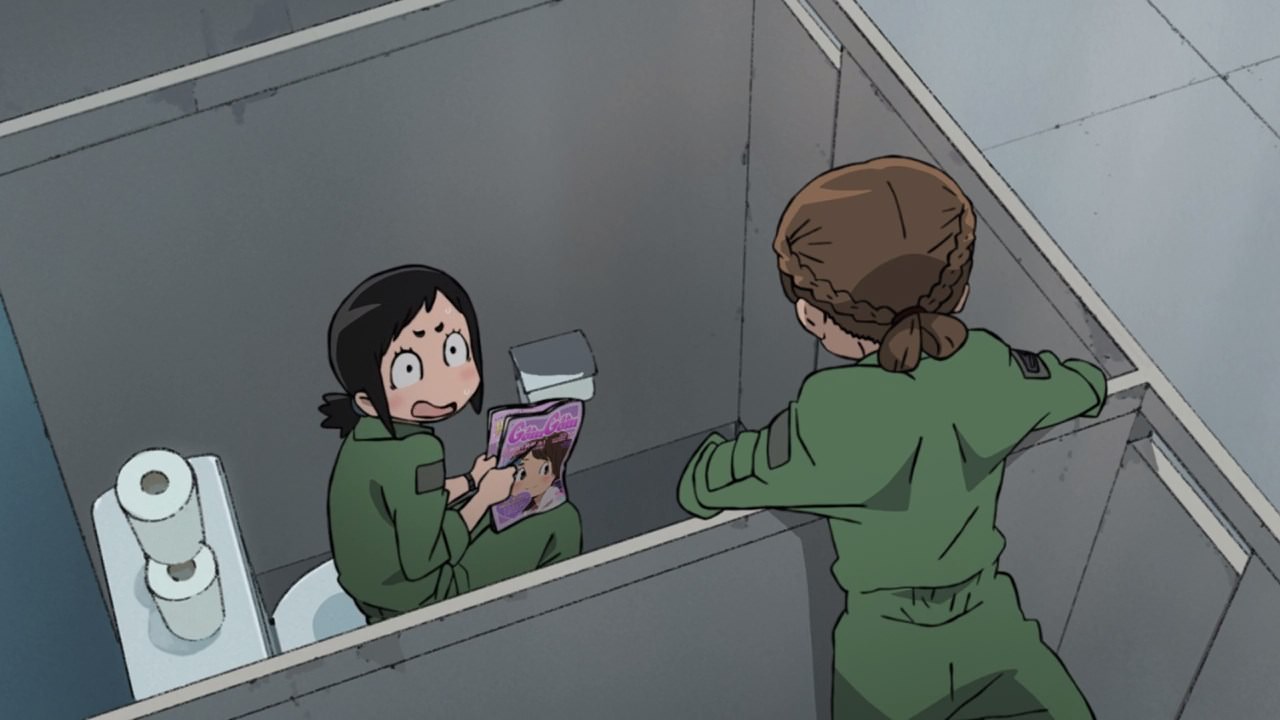 Heck, even Hisone Amakasu heard about Kaizaki’s TAC name and though that it was the lamest thing ever. I must say that Hisone is brutally honest when it comes to other people! 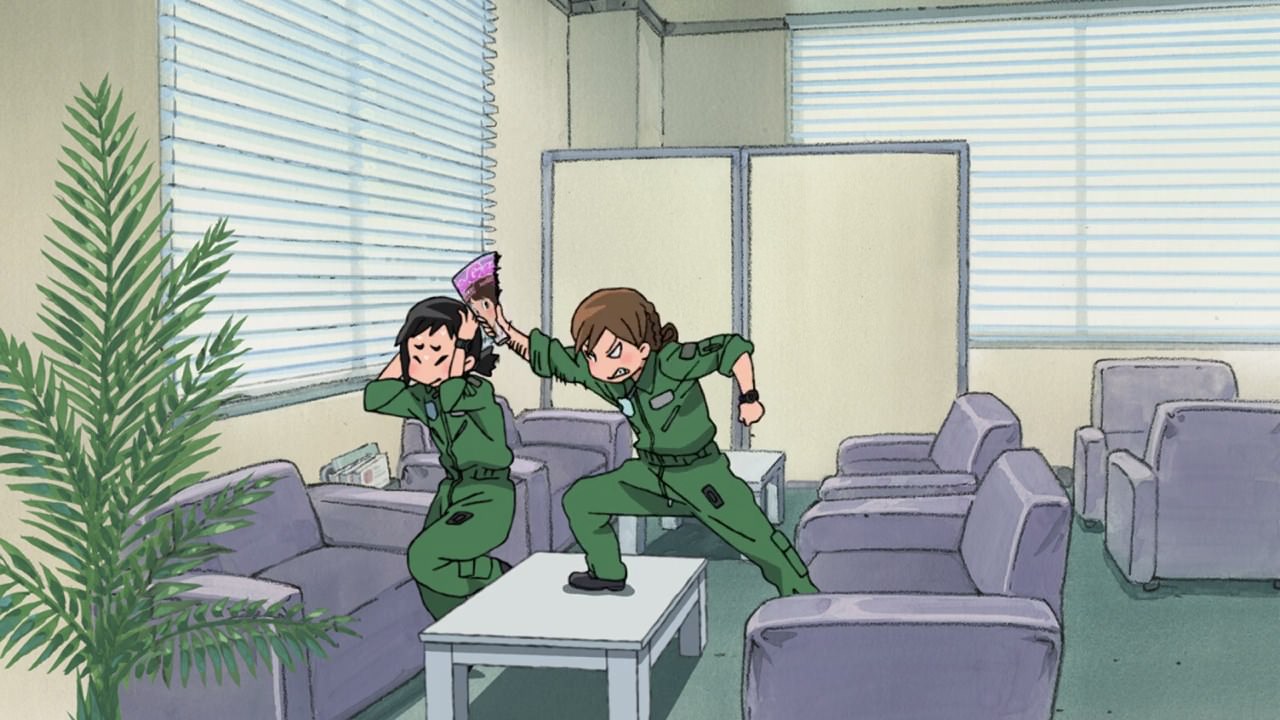 Therefore, Nao Kaizaki smacks Hisone Amakasu with a magazine. Well, she should have kept her thoughts to herself. 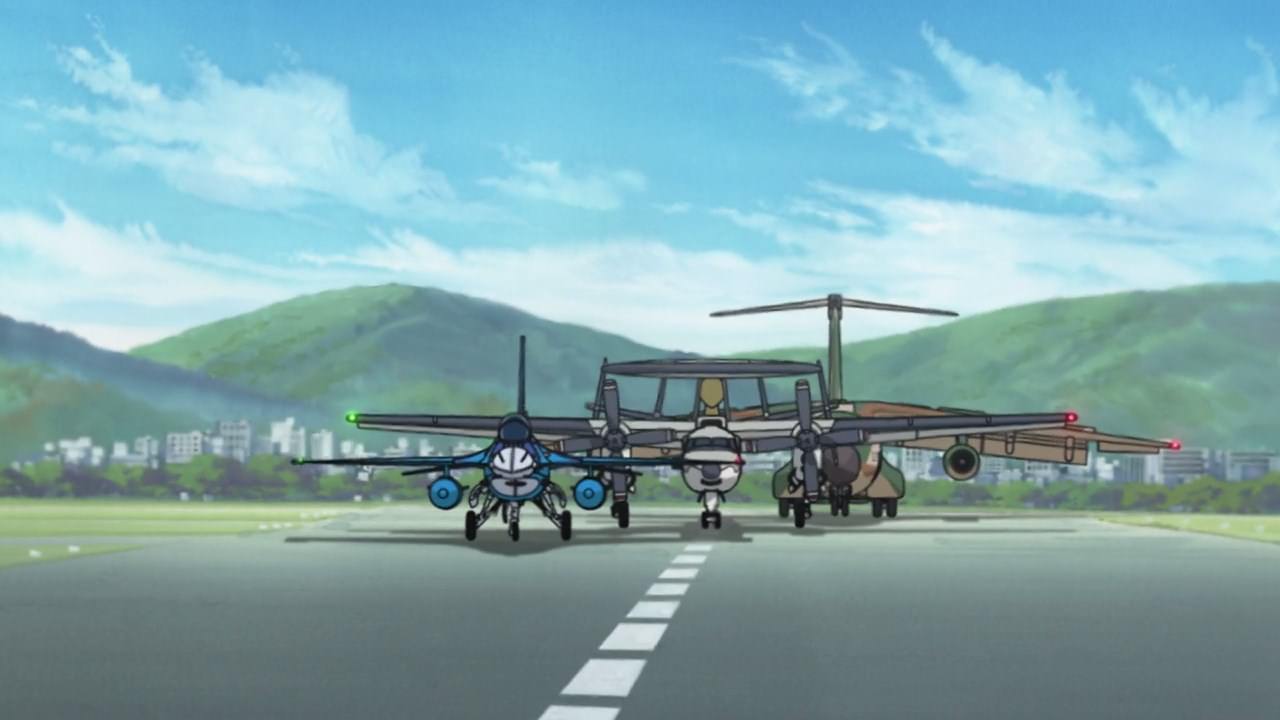 Now then, seems that we’ll have more D-Pilots coming into Gifu Air Base, complete with their Organic Transporting Flyer with different sizes and shape. 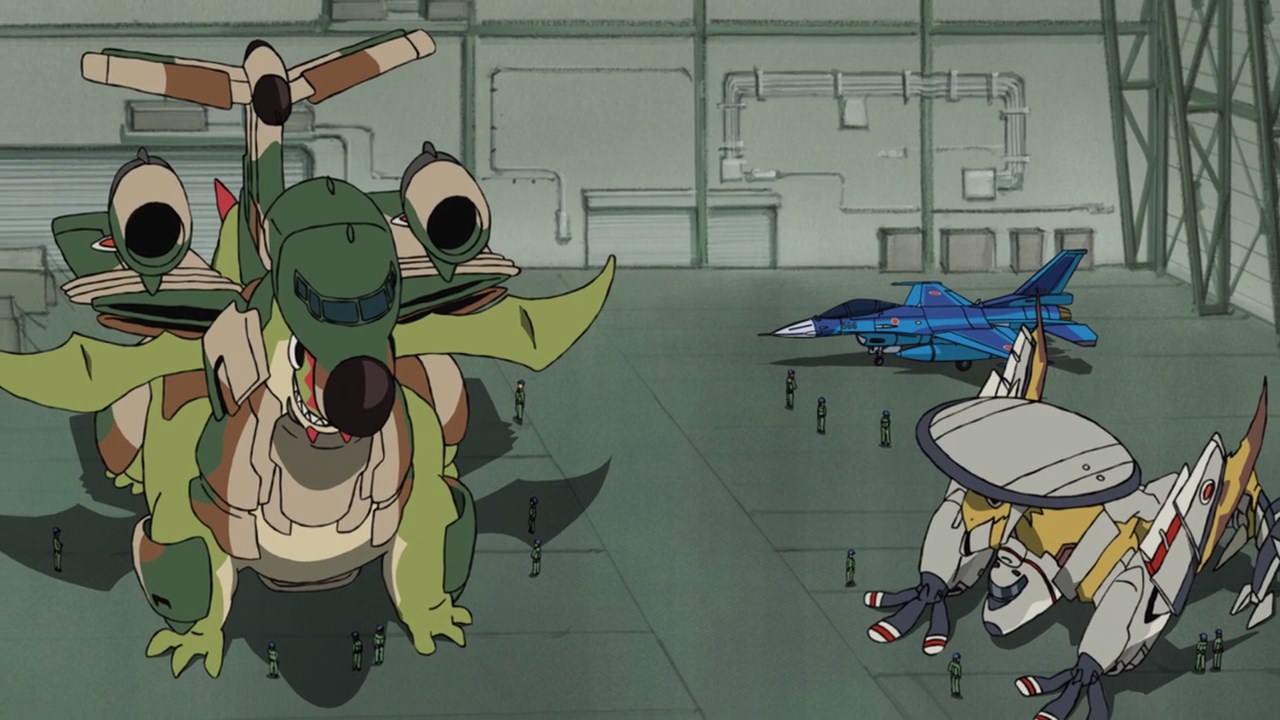 Heck, they even transform from an aircraft into a dragon too. Well, except for the blue Mitsubishi F-2 fighter jet which still retains its form. I wonder if the OTF is okay being stuck around as an aircraft? 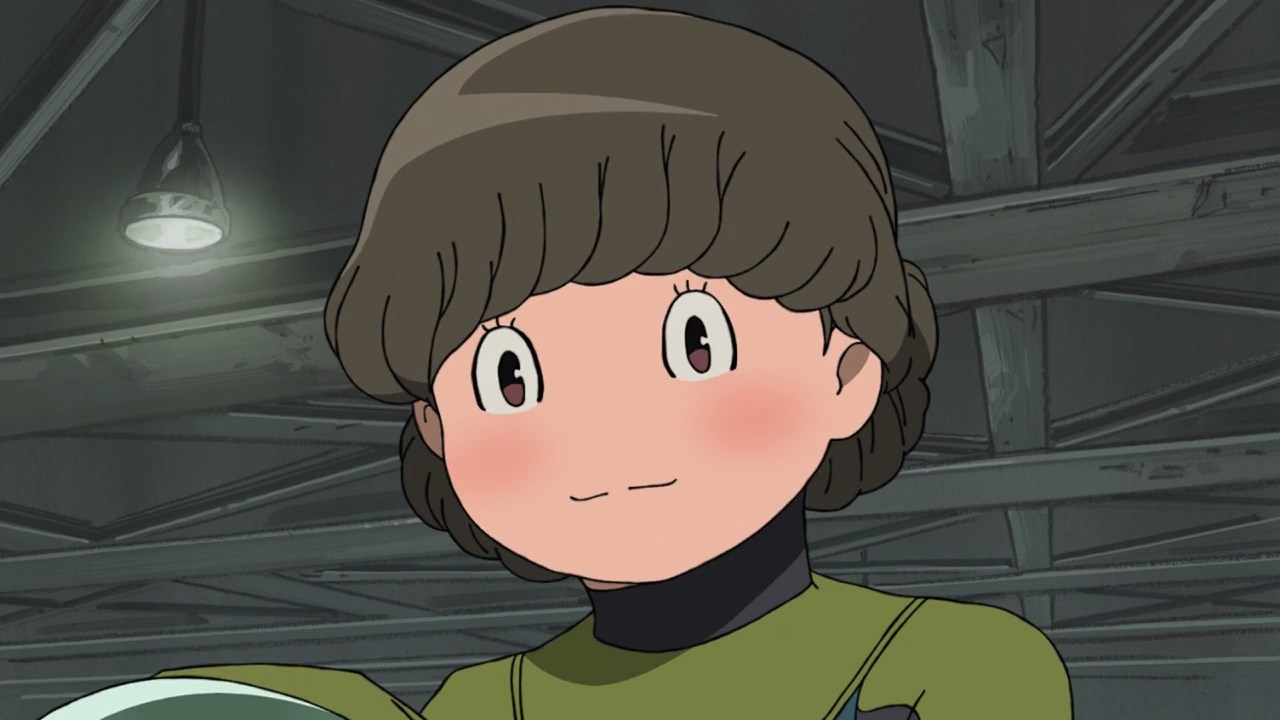 But anyways, here are the D-Pilots that’ll be joining in starting with Technical Sergeant Mayumi Hitomi, TAC Name “Morris”.

Despite being large, Mayumi is quite a nice girl and she’s very fond towards her C-1 Transport OTF “Futomomo”. 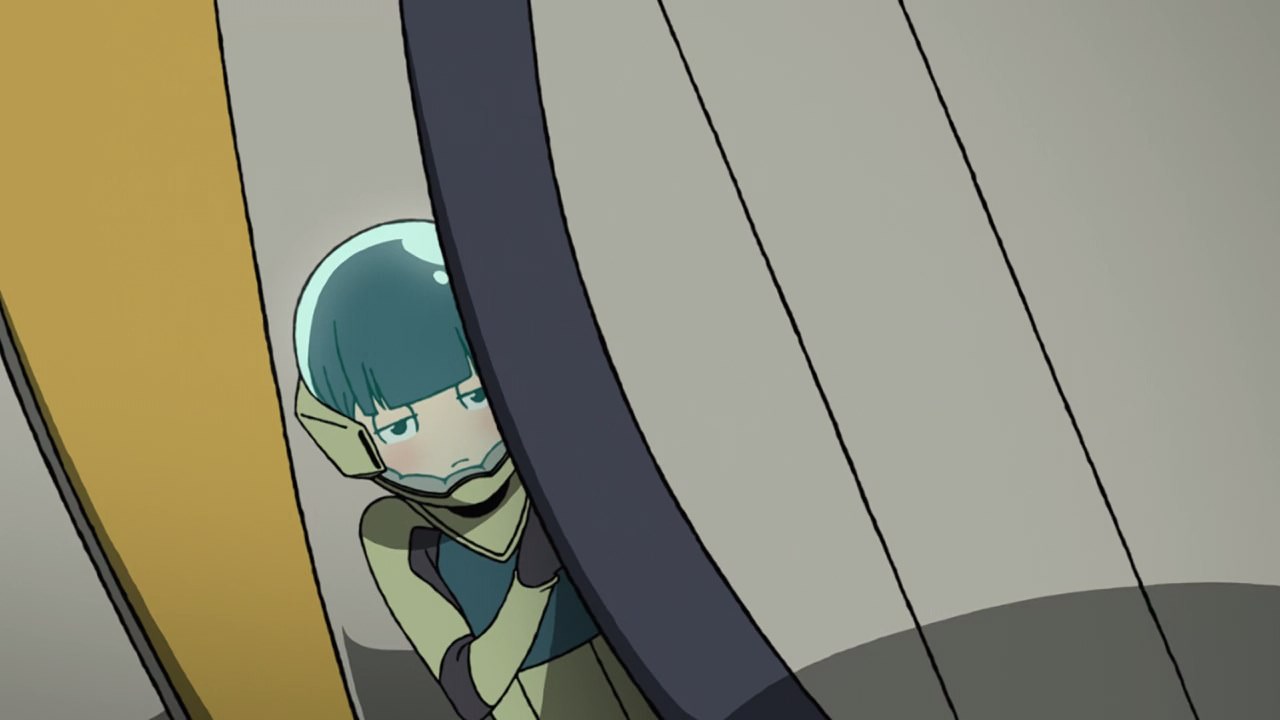 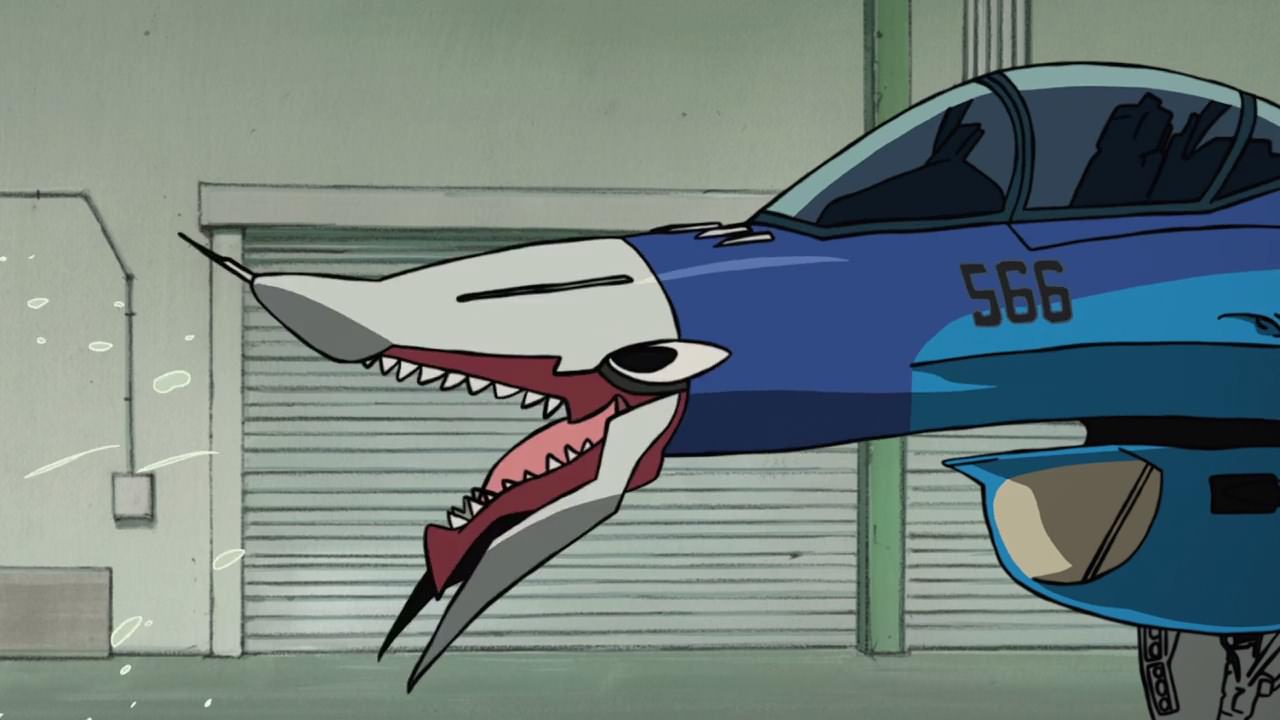 Well, seems that we’re gonna see the last D-Pilot as F-2 OTF just spit her out. 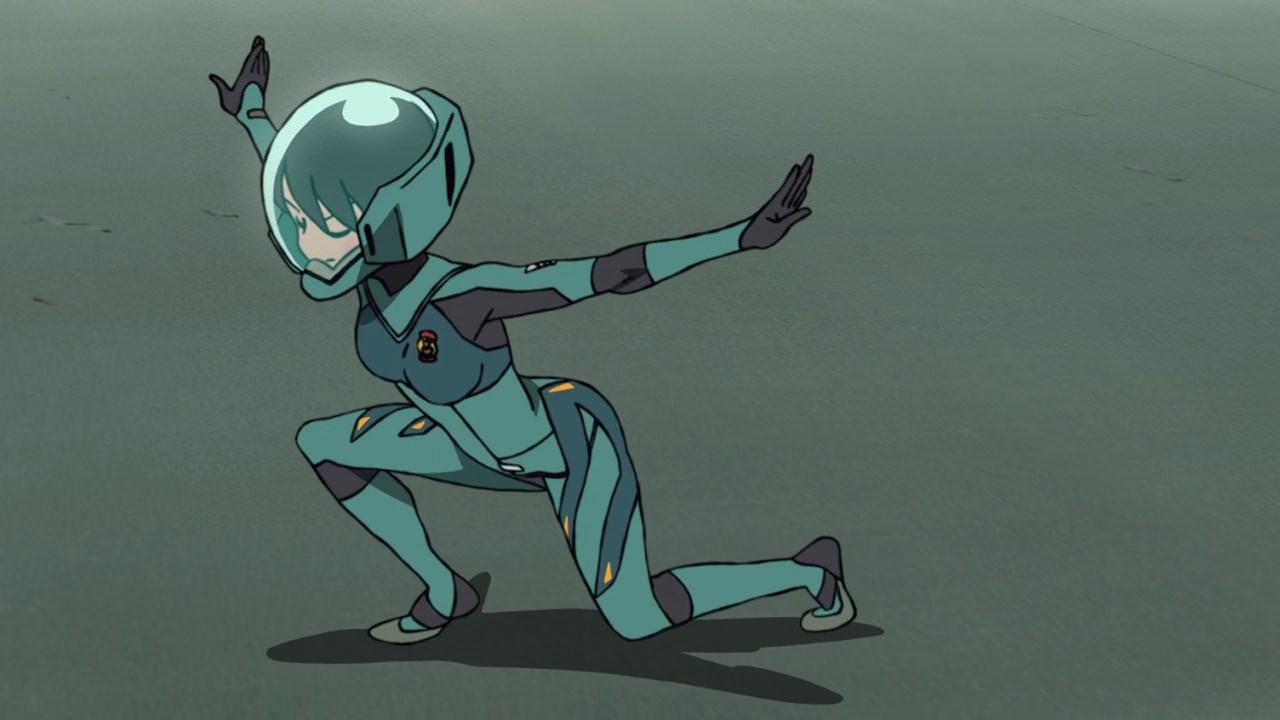 This is Senior Master Sergeant Eru Hoshino, TAC Name “Penguin”, who is the most serious and uptight D-Pilot around. 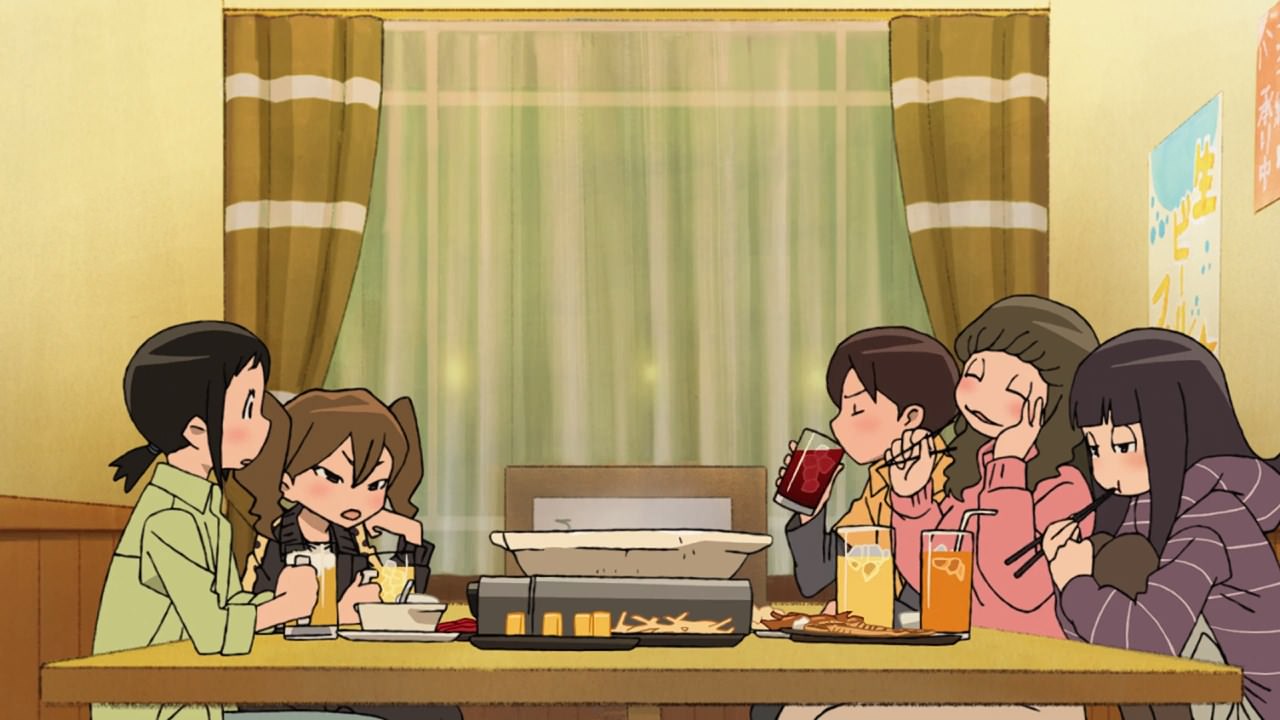 And they only way to interact with one another is by going to a pub and drink some booze.

Then again, Eru Hoshino is not interested on talking with the likes of Hisone or even everyone as she thinks that everyone looked and act weird. 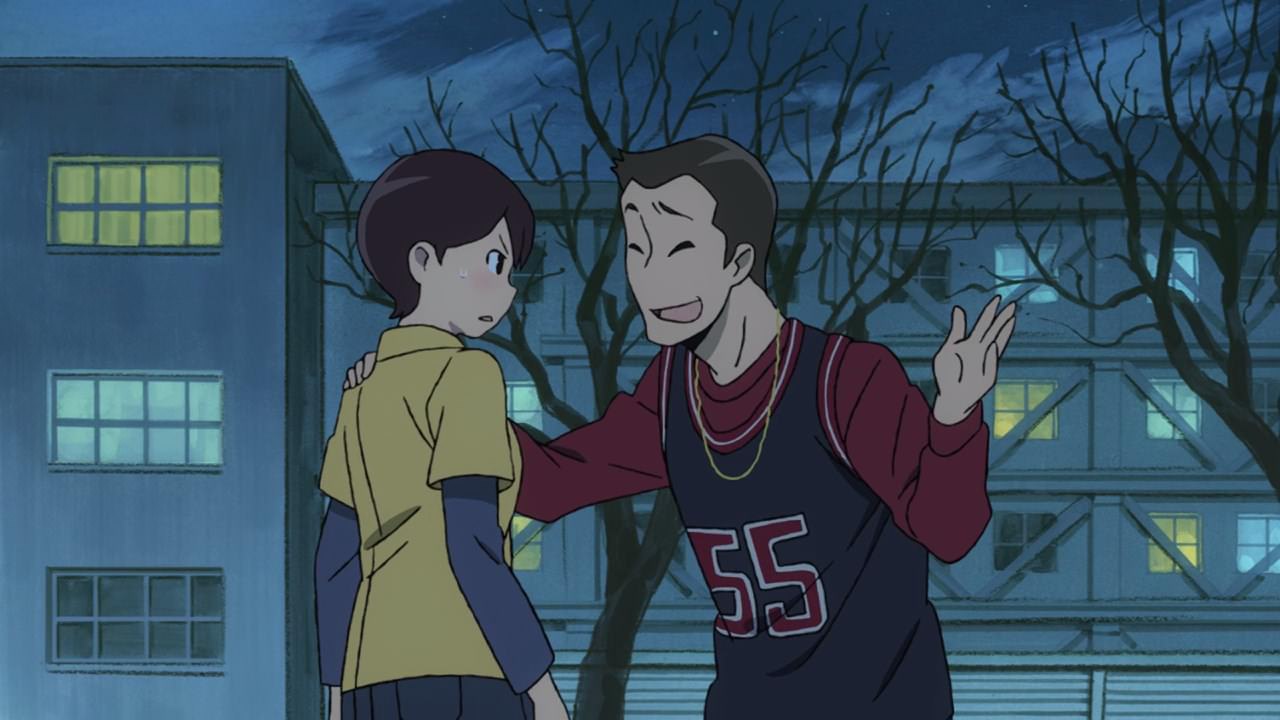 On the other hand, here’s Flight Leader Zaitou as he wants to invite Eru Hoshino for a drink, even though she already went to the bar with her fellow D-Pilots.

Y’know Yutaka Zaitou, you should give up on Eru Hoshino because if you continue to pursue her even though she doesn’t like to, Hoshino might report you for sexual harassment! 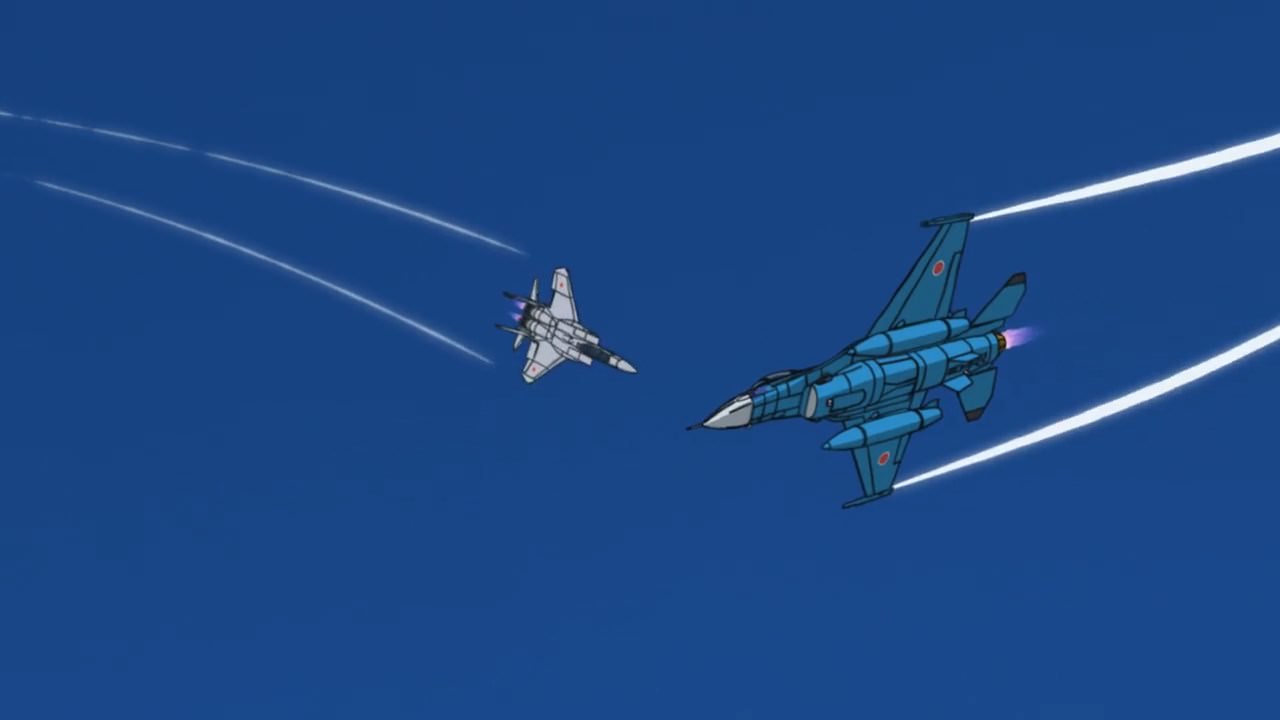 Anyways, time for a mock mission where the D-Pilots are supposed to go to a rendezvous point while avoiding the aggressors.

However, it appears that Eru “Penguin” Hoshino decides to split from the formation and tries to take out the aggressors by herself. 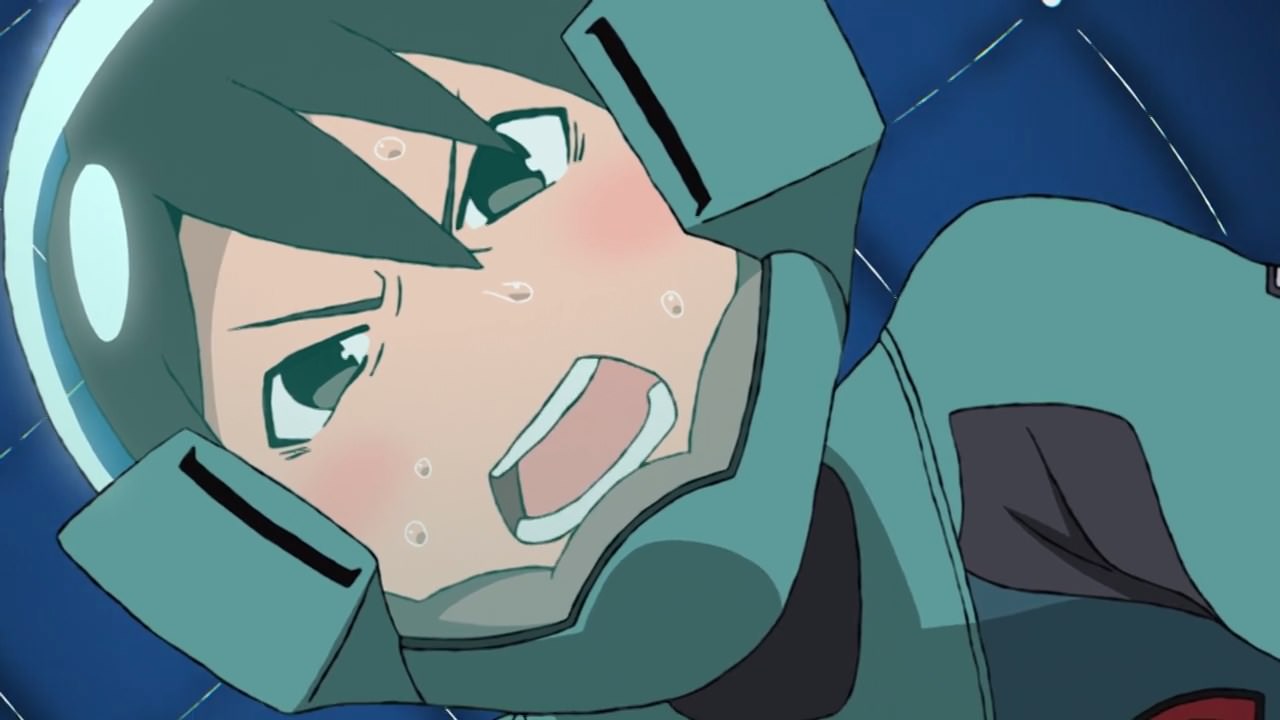 And here’s Master Sergeant Hoshino as I must say that she’s trying too hard to become the best female fighter pilot.

You know, it would be nice if she loosen up a bit because Eru is distancing herself from her fellow D-Pilots and even her Organic Transporting Flyer which Hoshino just call it as “F-2”. Really, does she have no care about her OTF at all? 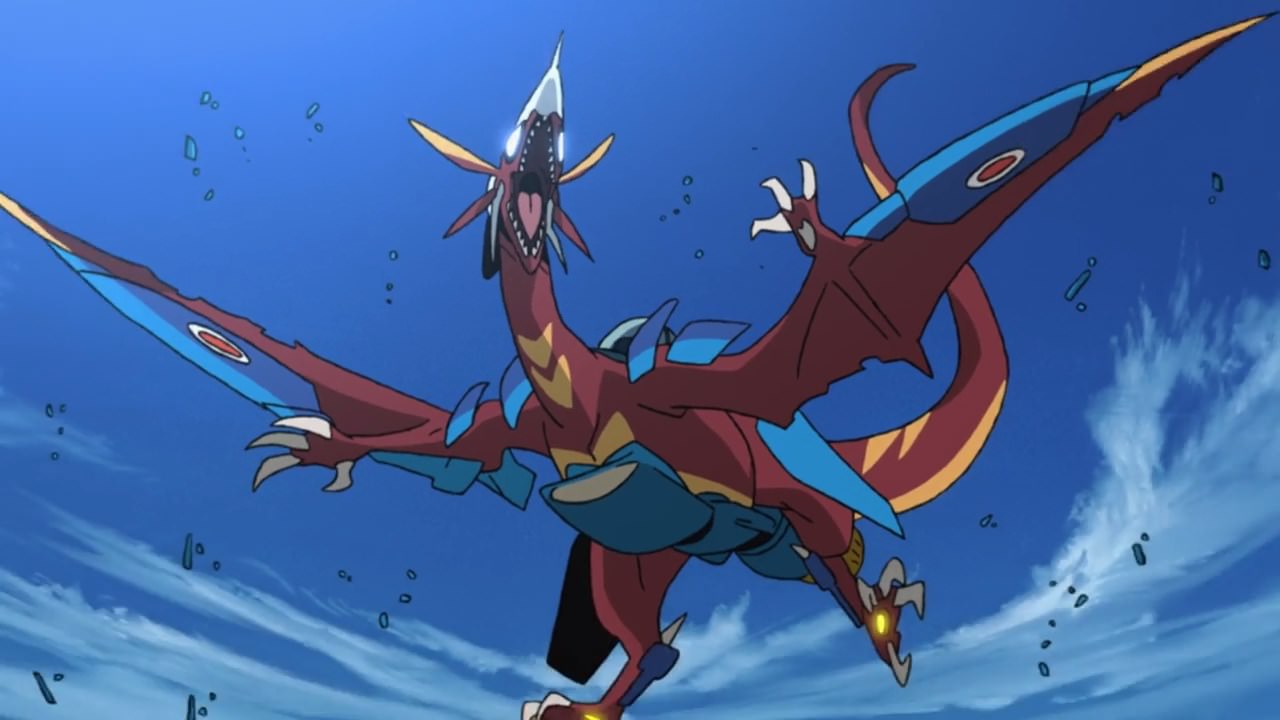 Speaking of Hoshino’s OTF, looks like F-2 has decided to spread out its wings since being a fighter jet puts more strain on its muscles.

Well, seems that the mock mission will be postponed as Eru Hoshino’s OTF went berserk! 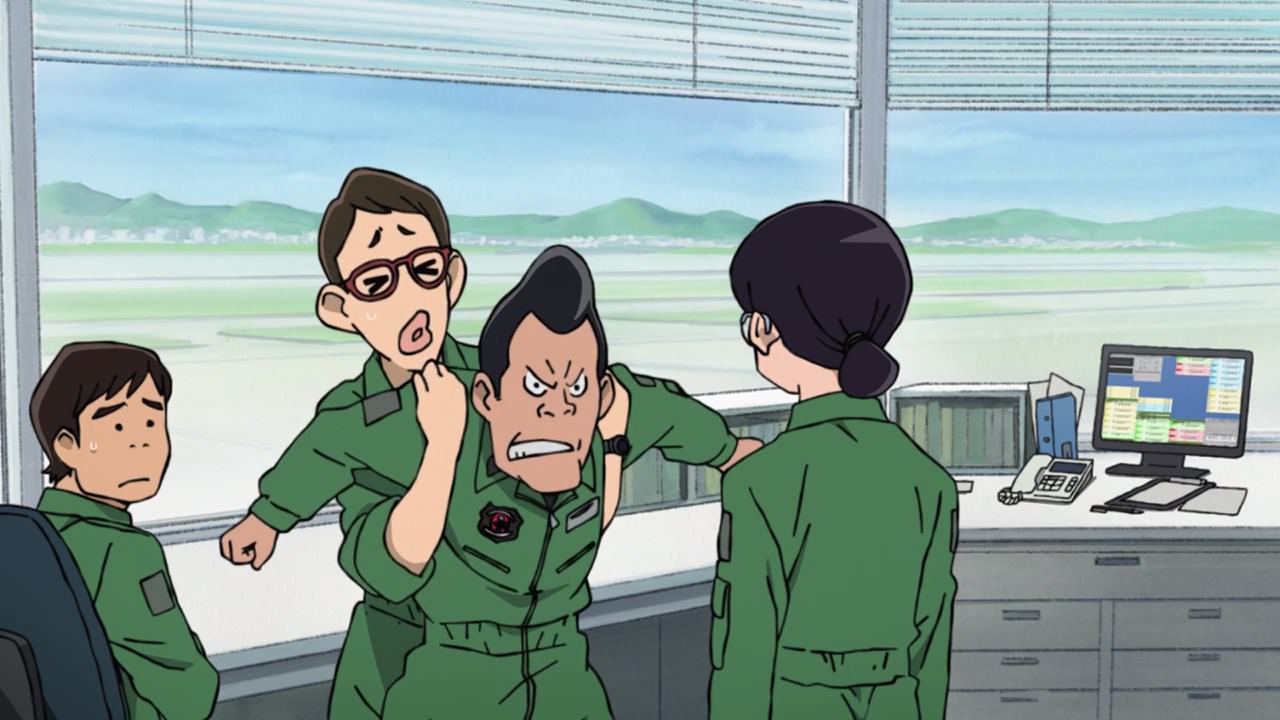 For Shingo Maezawa, this is unacceptable as he lashed at Remi Kakiyasu for her lack of supervision. But you know what, it’s Eru Hoshino’s fault for not treating her OTF like a friend.

With that said, looks like the D-Pilots will need to reassess themselves before engaging in real missions, especially Hoshino. 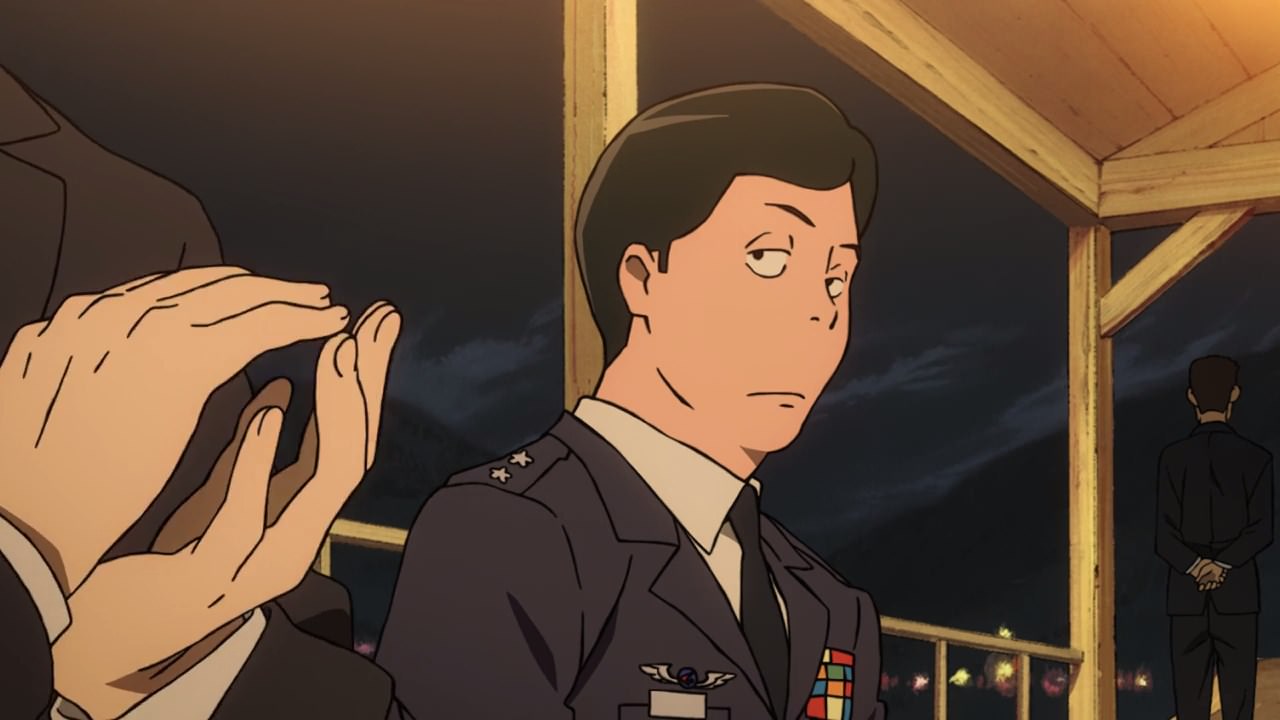 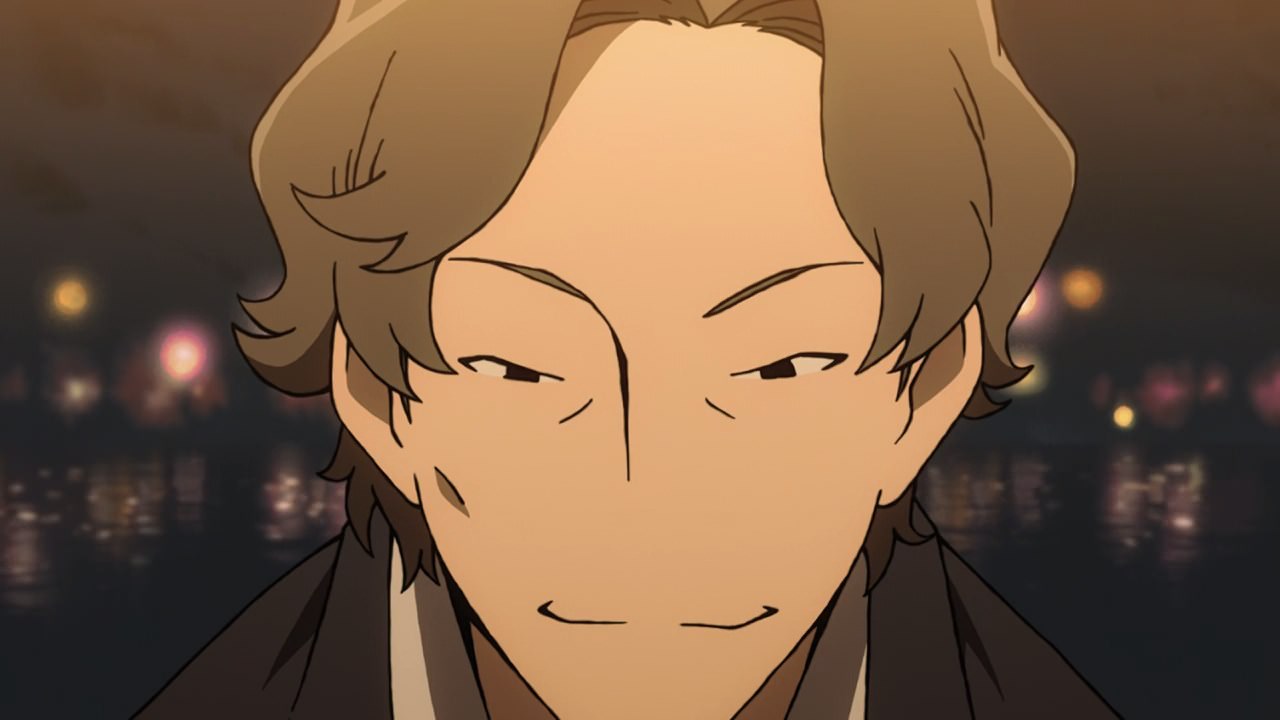 This is Administrative Vice-Minister Iiboshi and I have a feeling that he’ll be the antagonist of this show. Hmm, I wonder what his role will be other than looking like a bad guy?

With that said, I’ll see you next time and while I’m happy that we got more D-Pilots, I feel that they need to work together if they’re worthy of serving the Japan Air Self-Defense Force.