Darling in the FranXX Episode #16 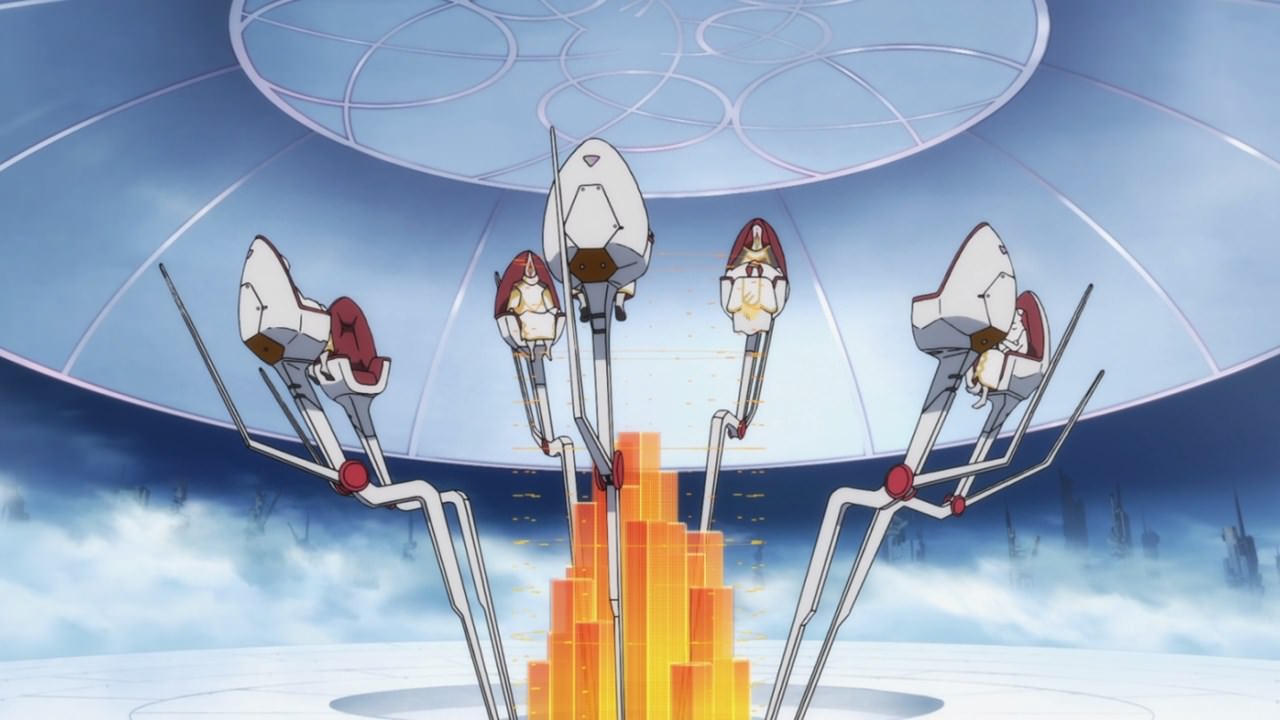 Well, here’s Papa and his nebulous council again as they’re reaching closer of defeating the klaxosaurs after reclaiming the Gran Crevasse, at the expense of various plantations and parasites who risked their lives to take back that precious piece of land.

But you know what, they don’t care on sacrificing their kids as long as they benefit for themselves and one more thing, they’re not on Earth but rather the council is in outer space where they look over the Earth from a safe distance. Yeah, they’re pretty apathetic towards the rest of humanity, mostly the kids. 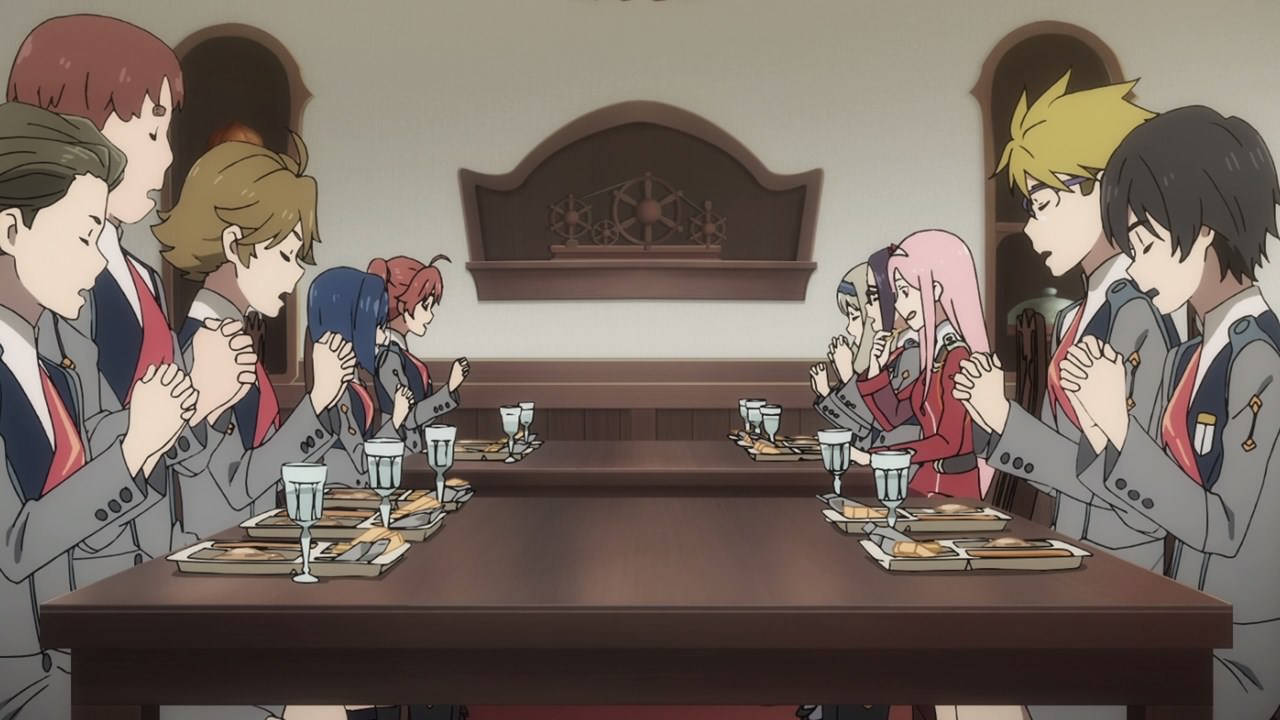 Speaking of those kids, it’s been a month since that major offensive and unfortunately for the likes of Code:016 “Hiro” and Code:002 “Zero-Two”, their food supplies and other necessities will be dried out ever since Papa and the council decided to stop giving them, letting them die inside Mistilteinn.

It’s no surprise there given that the parasites are expendables to Papa and the rest of the nebulous council. Worst of all, they don’t know how to survive without the help from the adults, especially from Nana and Hachi since they’re forbid them to help those kids. How useless those adults are! 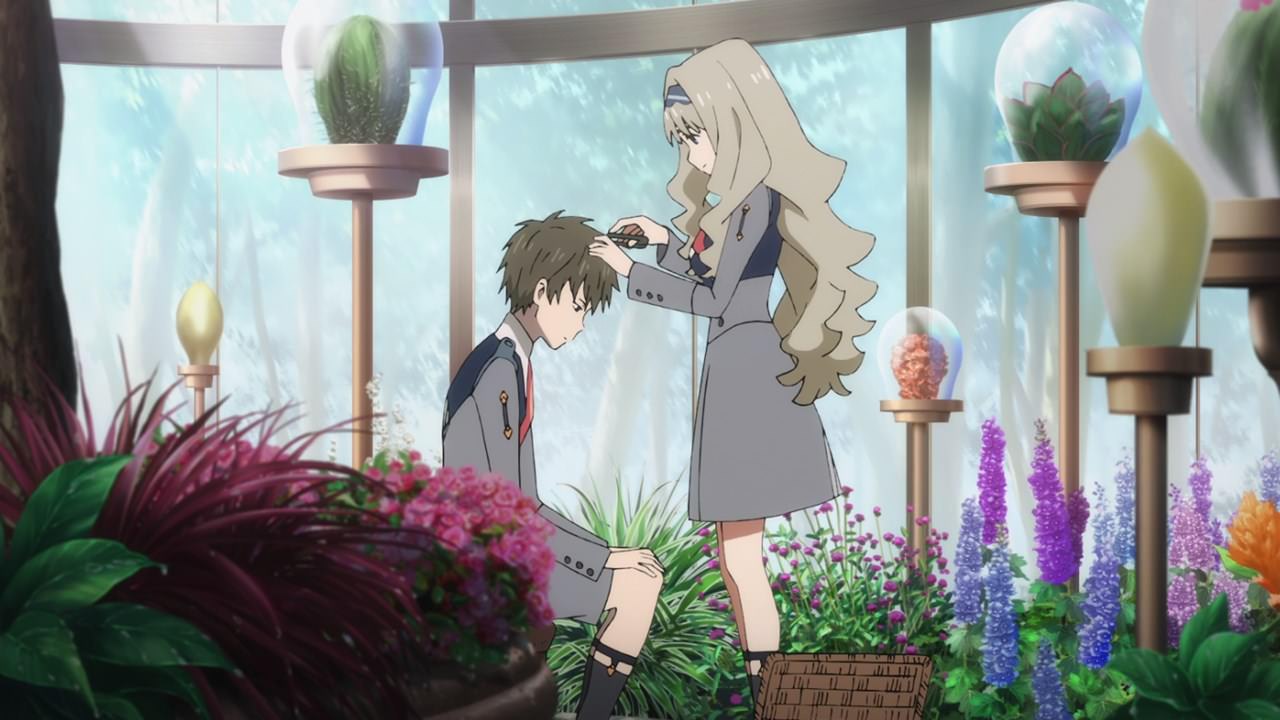 Meanwhile, here’s Code:326 “Mitsuru” as he’s getting a haircut from Code:556 “Kokoro”. Still, Mitsuru doesn’t know on whether to forgive Hiro or not after forgetting his promise. 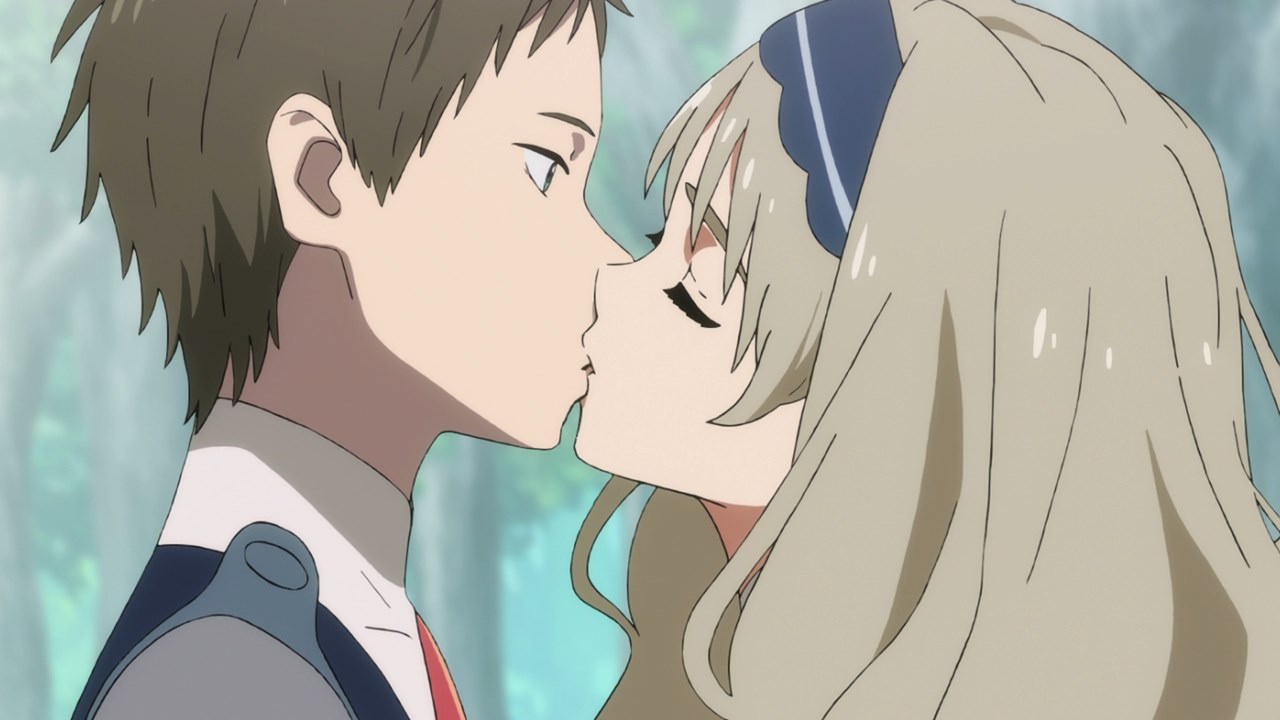 However, he got a kiss from Code:556 “Kokoro” in which Code:214 “Futoshi” might not like it after all. Damn, he got NTR’d but we’re already know that Kokoro is secretly a bitch!

Now then, here’s some naked skinship between Code:390 “Miku” and Code:002 “Zero-Two” at a river. By the way, seems that Zero-Two changed a lot after the previous episode and now she’s very much integrated into the squad.

Oh yeah, while they’re having fun at the river even though their water supplies are running thin, Zero-Two noticed something on Miku’s hair…

Turns out that she’s getting some strands of white hair. Hmm, don’t tell me that the kids are rapidly aging? Damn, I can’t believe that they won’t survive as adults after all! 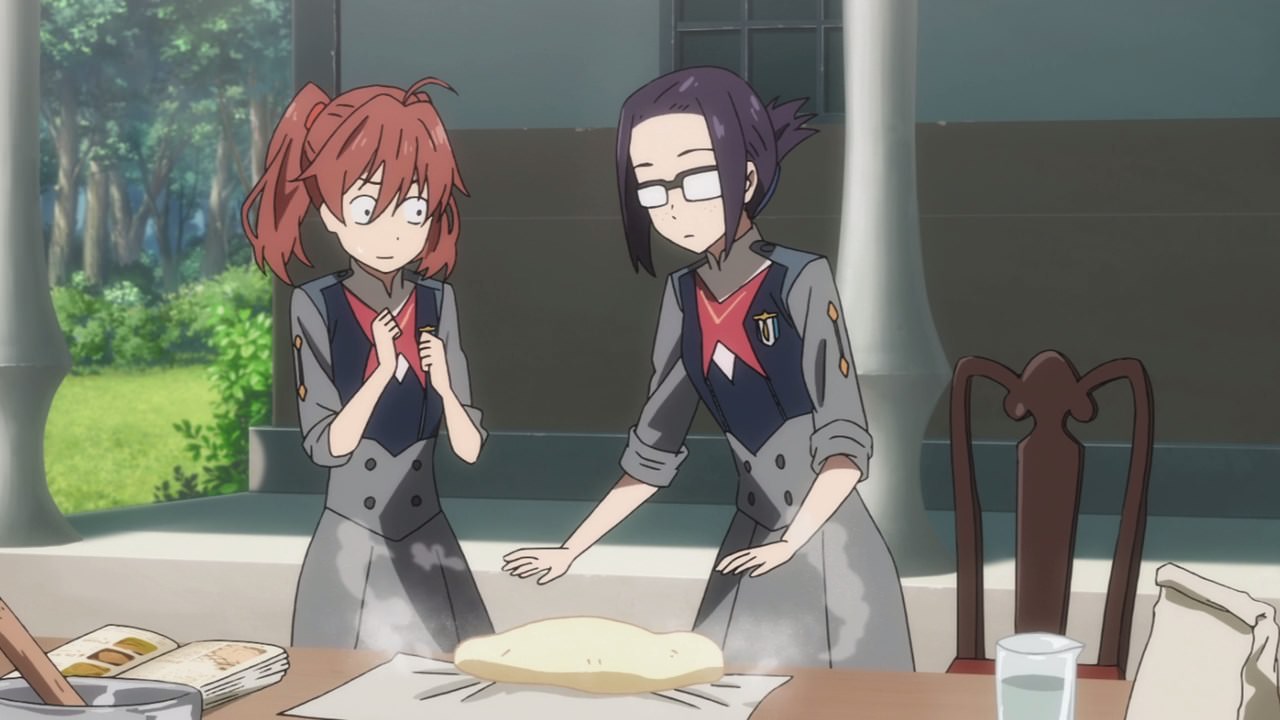 After bathing at the river, it’s time for those kids to learn how to cook food since their caretakers mysteriously went away. I guess they don’t want to deal with the likes of Code:390 “Miku” and Code:196 “Ikuno” anymore.

But that’s okay as they’ll manage to cook by themselves just by reading one of the books at the library. We don’t know on whether they’ll make an edible meal or not. 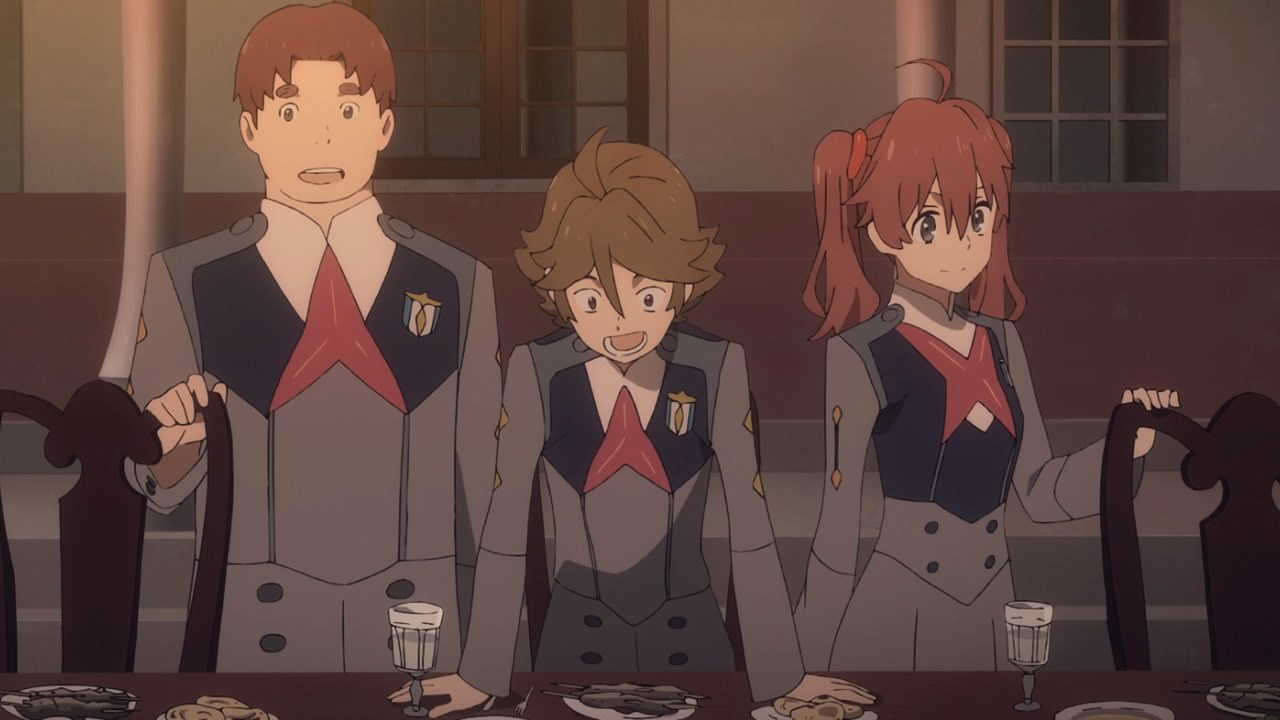 Still, they managed to make a decent meal which is a good start for those parasites who’ve just started their survival without the adults’ supervision.

Now then, the only thing that they need to do is to not get sick because I have a feeling that piloting a FranXX might shorten their lifespan. 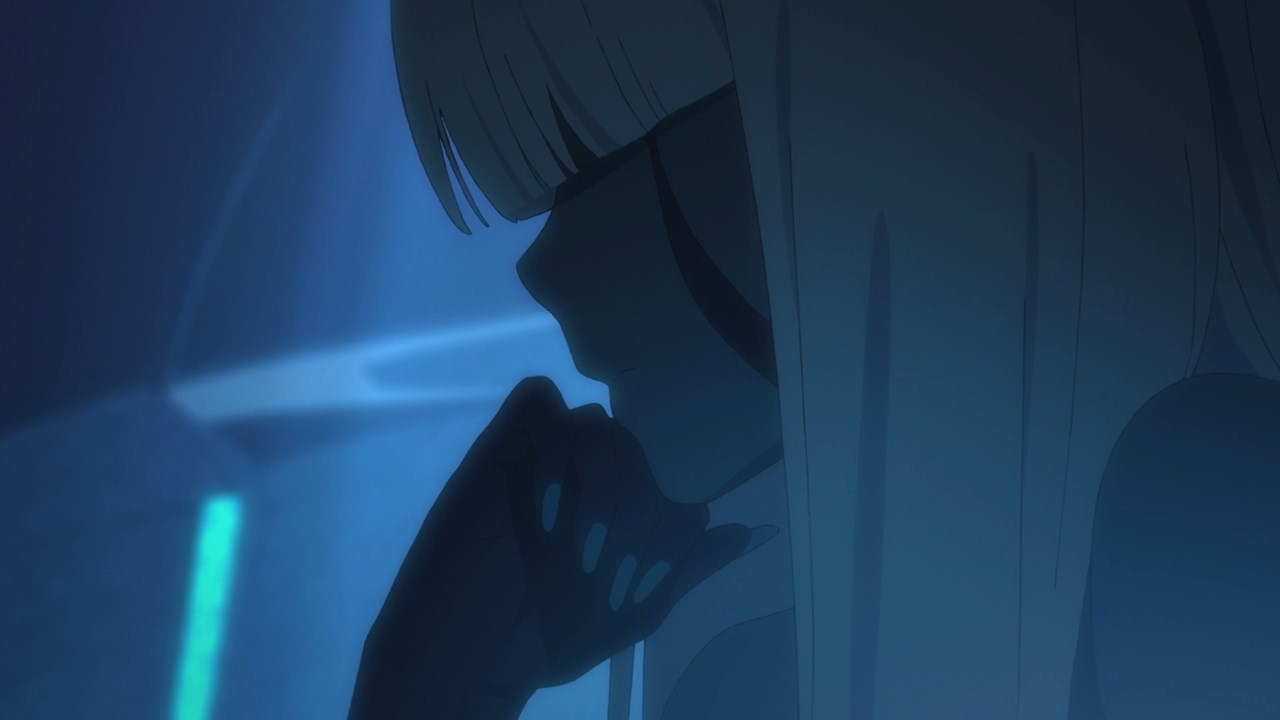 One last thing, it appears that we have another humanoid klaxosaur. But unlike Zero-Two, this one might be the leader of all klaxosaurs and Papa has somewhat of a grudge towards this princess.

Anyways, I’ll see you next time as the remaining parasites from Plantation 13 are now being cornered by the klaxosaurs and also the adults from APE. This is kinda depressing if you think about their situation!