Legend of the Galactic Heroes: Die Neue These Episode #07 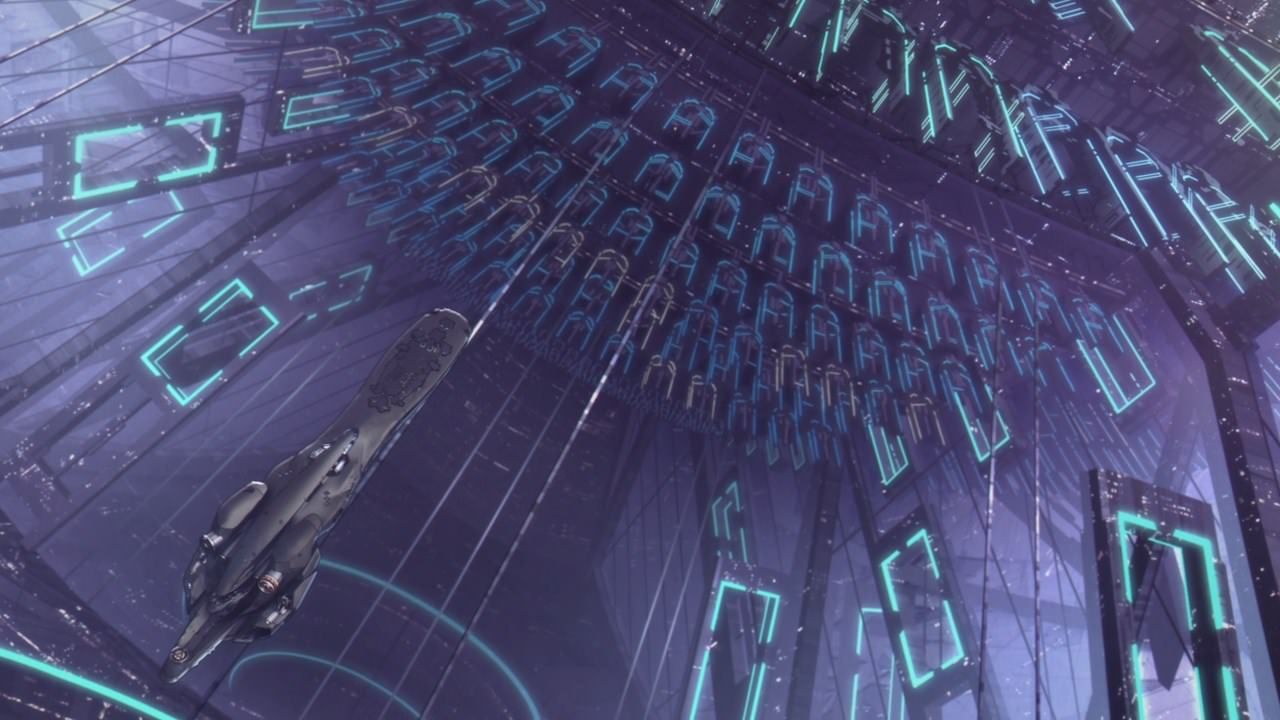 And now, it’s time for the conclusion of this epic mission to capture Iserlohn Fortress from within. This is a risky mission for the Rosen Ritter, especially Captain Walter von Schönkopf, where he and his comrades will be captured and deported back to the Galactic Empire.

By the way, Captain Schönkopf have some unpleasant memories in the Galactic Empire where his grandfather is being accused of plotting to overthrow the current Goldenbaum Dynasty. Thus, Walter von Schönkopf and his family escaped to the Free Planets Alliance where they’re living in exile. 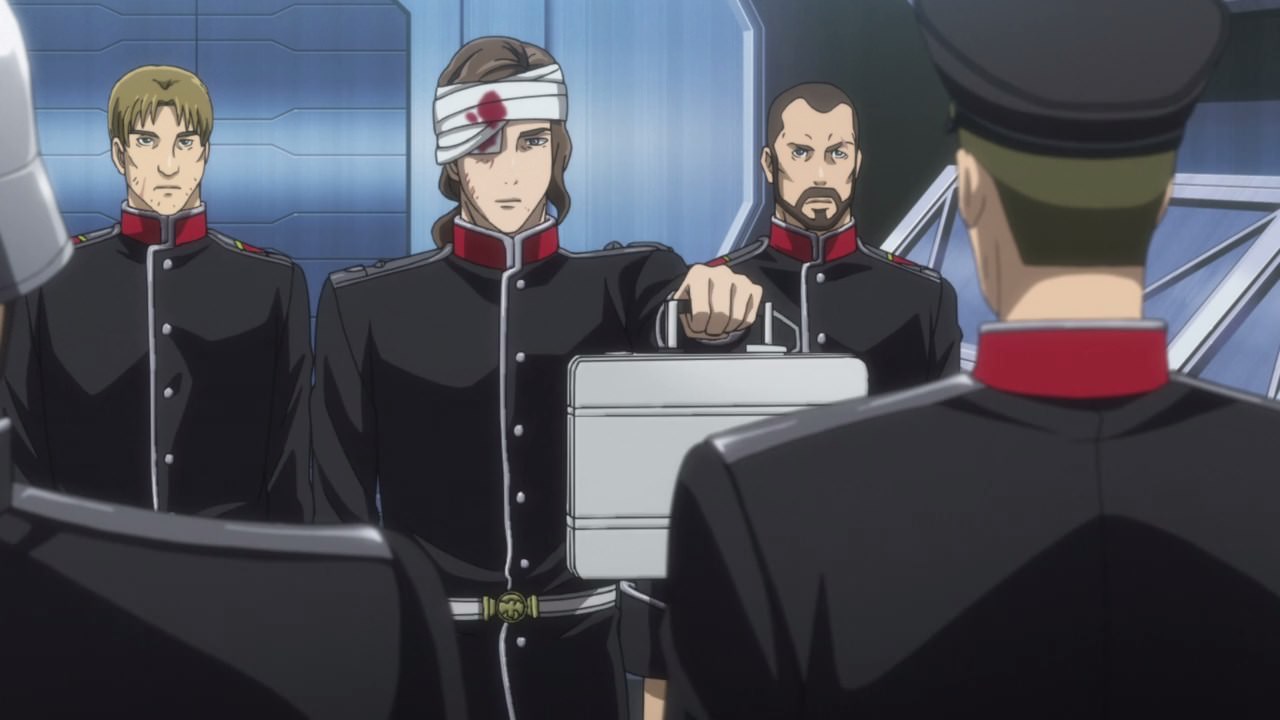 Now let’s move onto the mission where the first step is cleared for Captain Schö- I mean, Lieutenant Commander Laeken and his two subordinates.

Here., Lieutenant Commander Laeken told Lieutenant Mann that they stole some sensitive information from the Alliance during their espionage mission, so he wants to see Fortress Commander Admiral Thoma von Stockhausen immediately to discuss this matter. 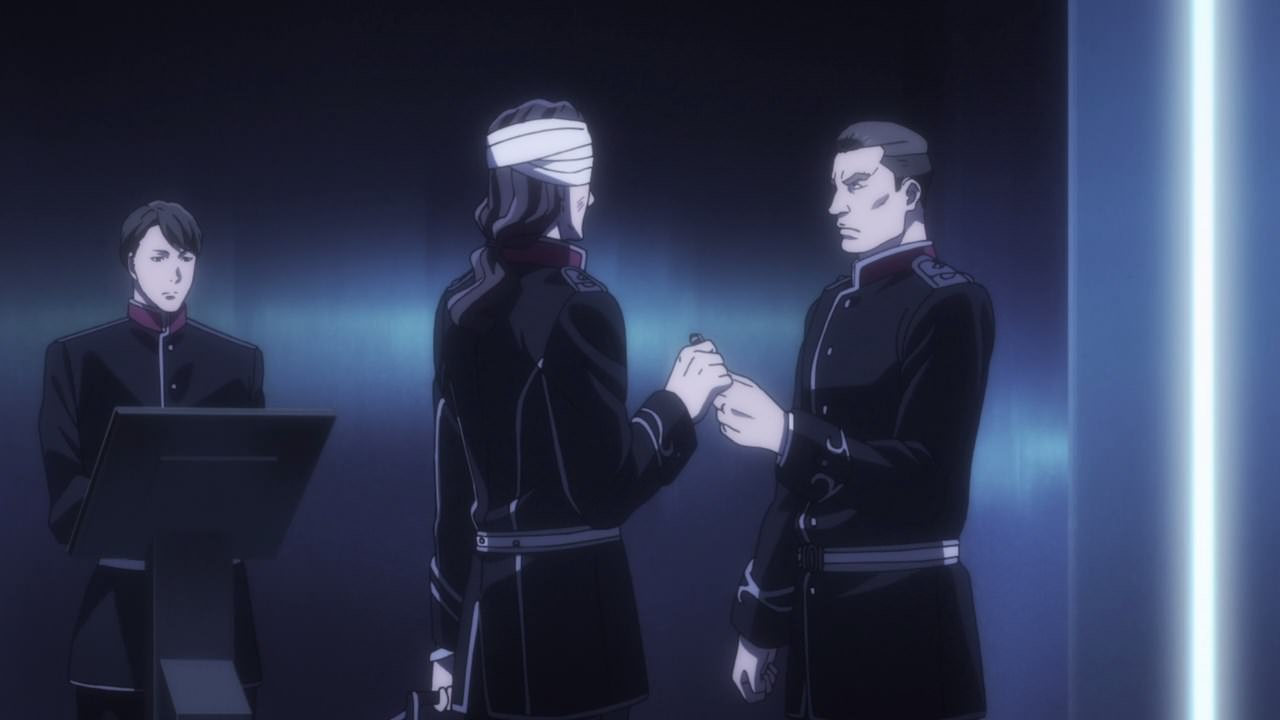 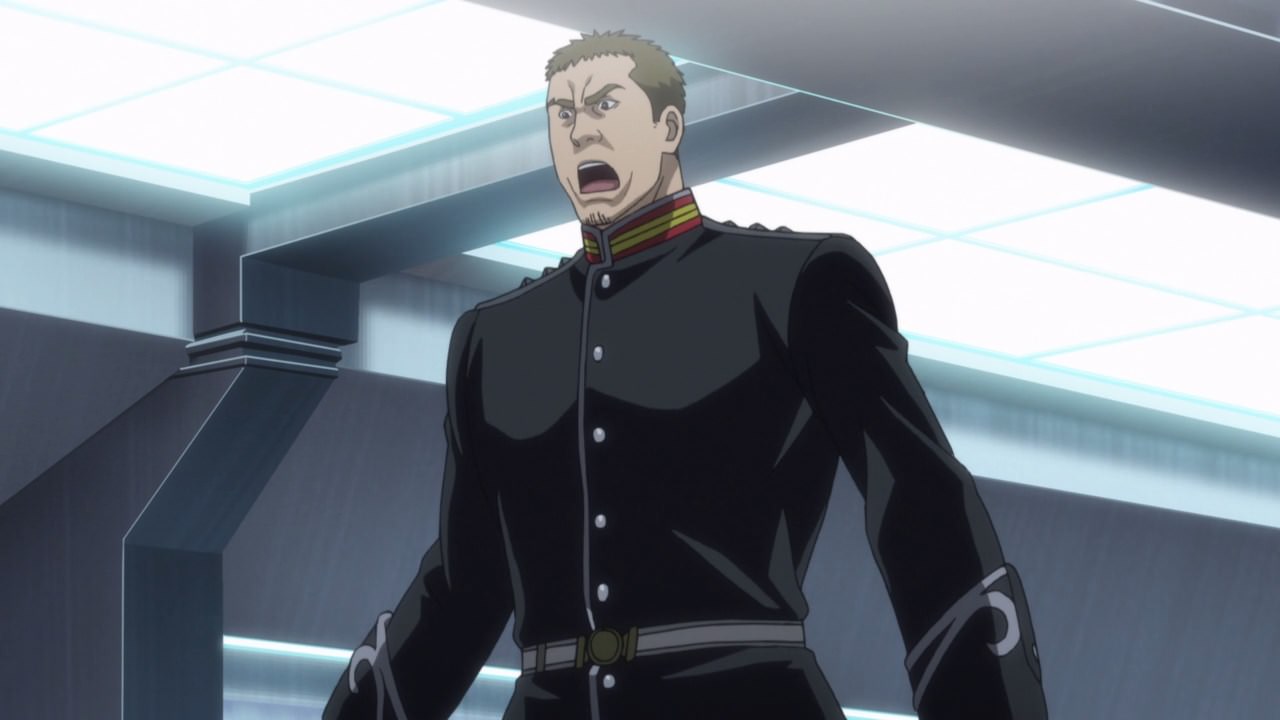 Then again, Fortress Commander Admiral Stockhausen wants to see Lieutenant Commander Laeken at once because there’s not much time to go through security checks when the Free Planets Alliance will make their next move. 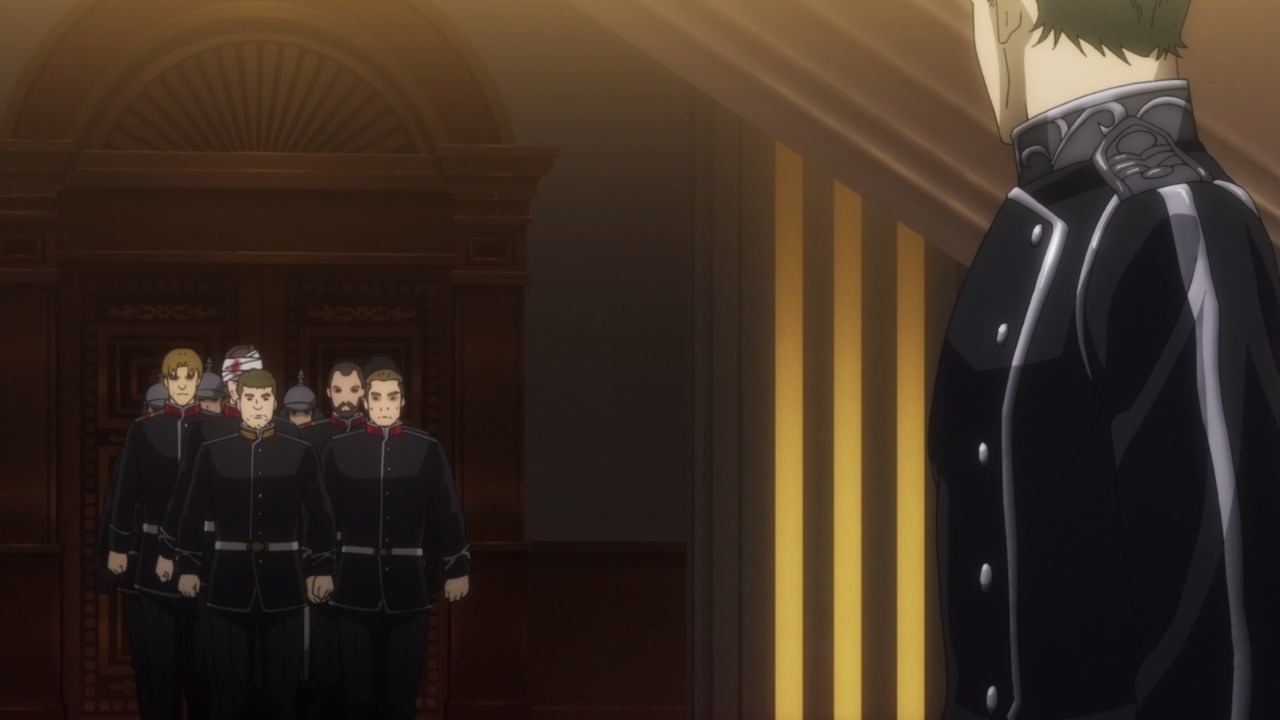 Anyways, Lieutenant Commander Laeken and his two subordinates have arrived at the control room where they’ll meet the Fortress Commander.

Let’s hope that things will go smoothly when the Galactic Empire got a hold of the secret documents. 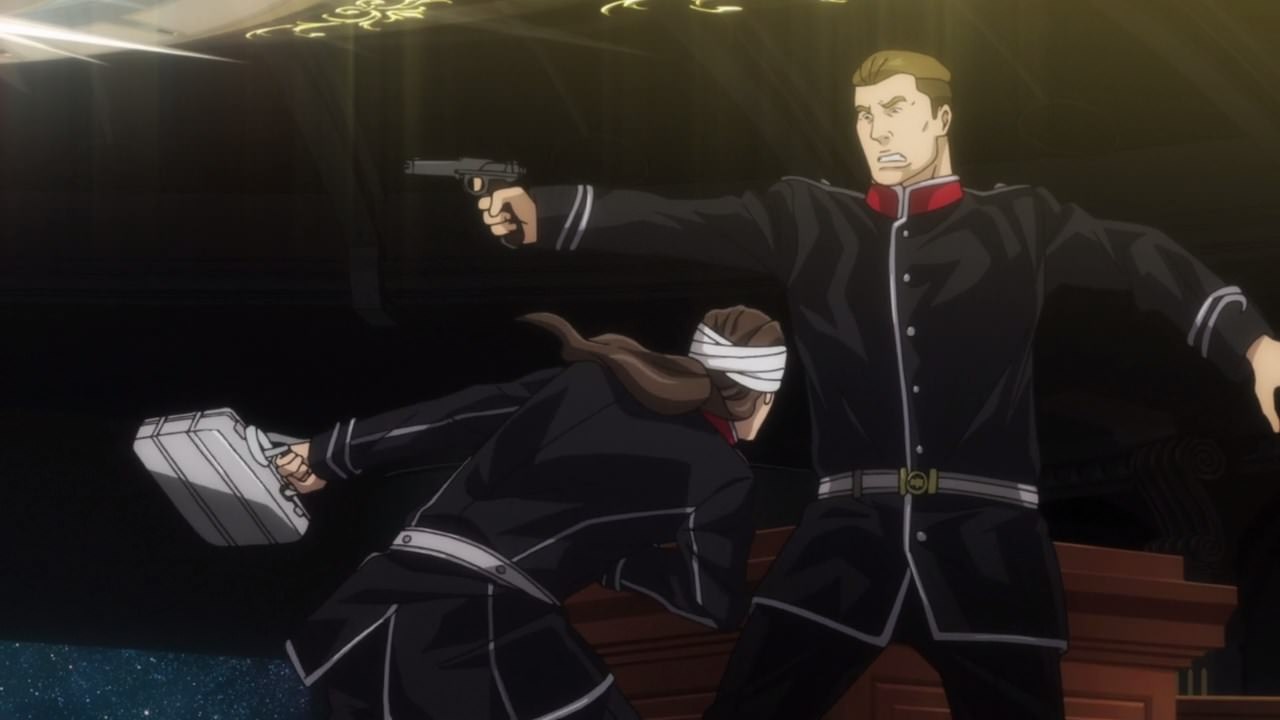 However, Lieutenant Commander Remler will try to stop the leader of the Rosen Ritter so what will Captain Schönkopf do? 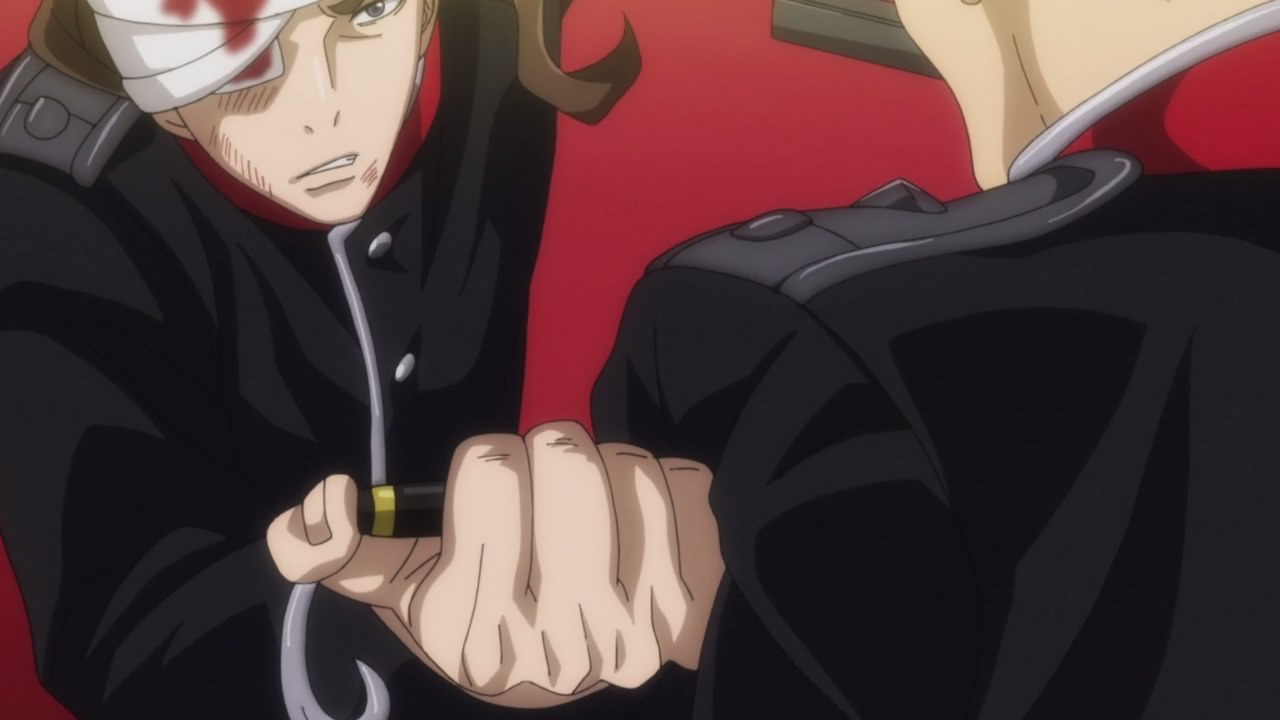 By using his trusty pen of course as Captain Schönkopf stab it towards Lieutenant Commander Remler’s arm. I must say that the pen is mightier than the sword! 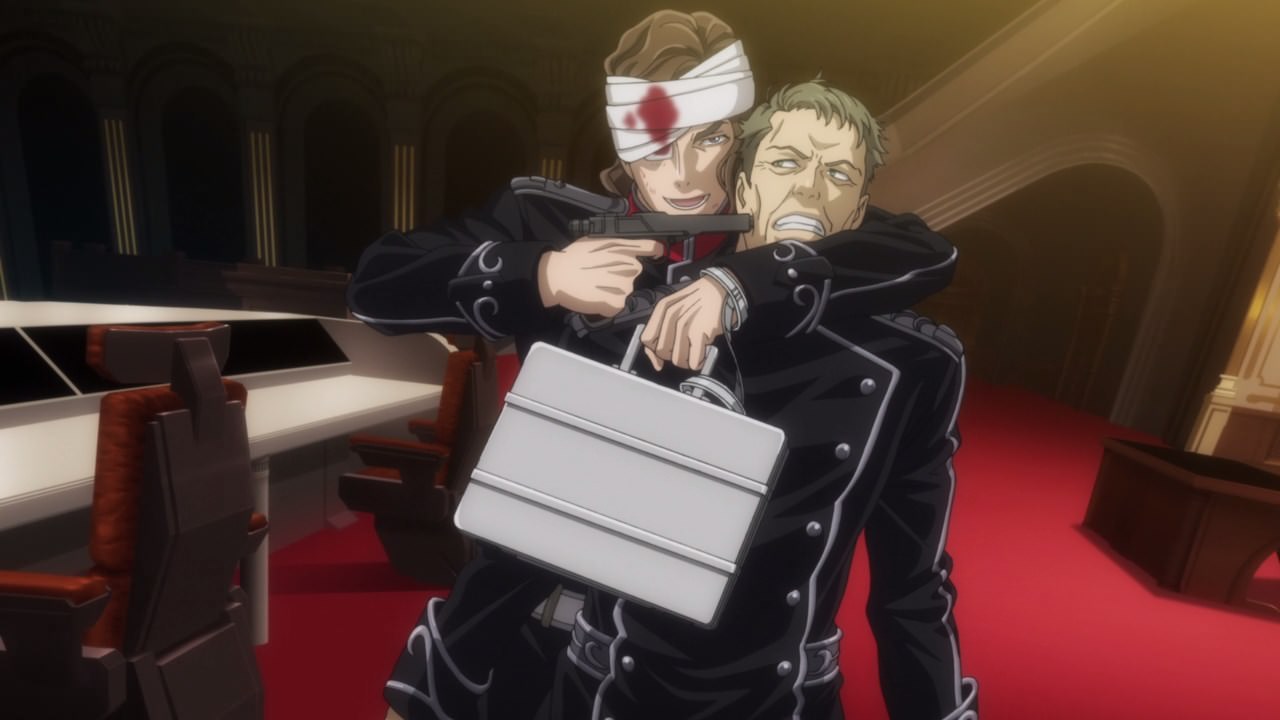 Afterwards, Captain Schönkopf took Admiral Stockhausen as his hostage as he told everyone to surrender. If not, this suitcase which contain Seffle particles will blow the entire fortress into space dust if someone would fire a gun.

While Admiral Thoma von Stockhausen offered him a pardon if he defect to the Galactic Empire, let’s just say that Captain Walter von Schönkopf will have to refuse on his offer because he doesn’t want to betray Rear Admiral Yang Wen-li and besides, he still wants to have sex with the girls at the Free Planets Alliance so yeah, he has some preference over the girls at the Empire. 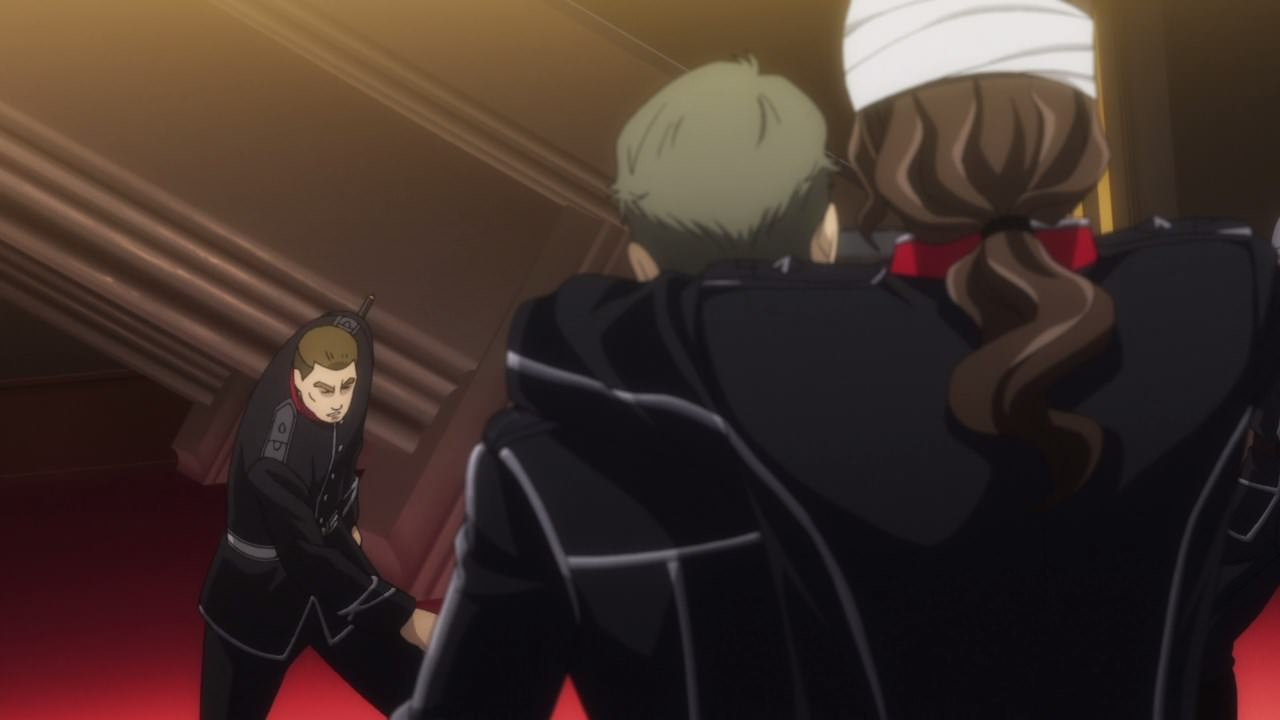 And so, the entire Iserlohn Fortress has been taken over by the Rosen Ritter. Hell, even Lieutenant Commander Remler couldn’t believe it.

As for them, they’ll be put to sleep and they’ll lock them up in a cell somewhere! 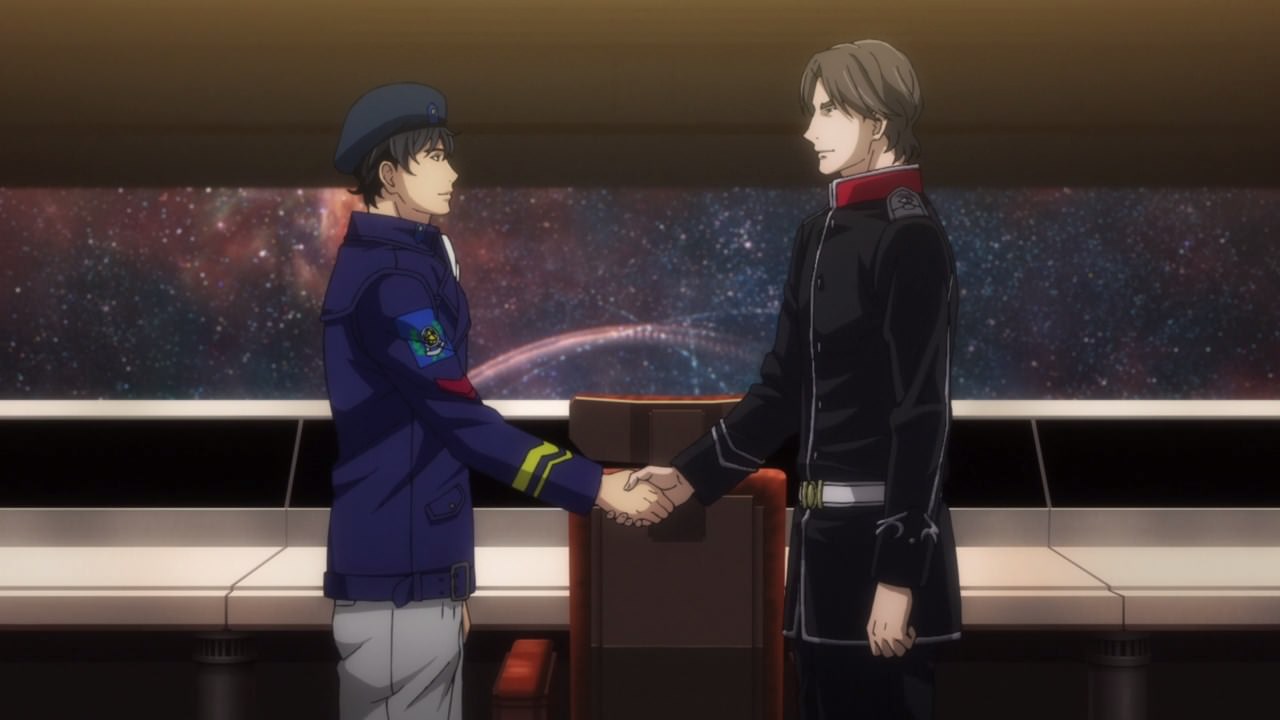 With the fortress now at the hands of the Free Planets Alliance, Rear Admiral Yang Wen-li congratulates Captain Walter von Schönkopf for his stunning performance of passing security checks and taking the Fortress Commander as his hostage.

Well, I have to say that Rear Admiral Yang’s plan paid off and now it’s up to the Fortress Garrison Admiral Hans Dietrich von Seeckt and his fleet to respond. 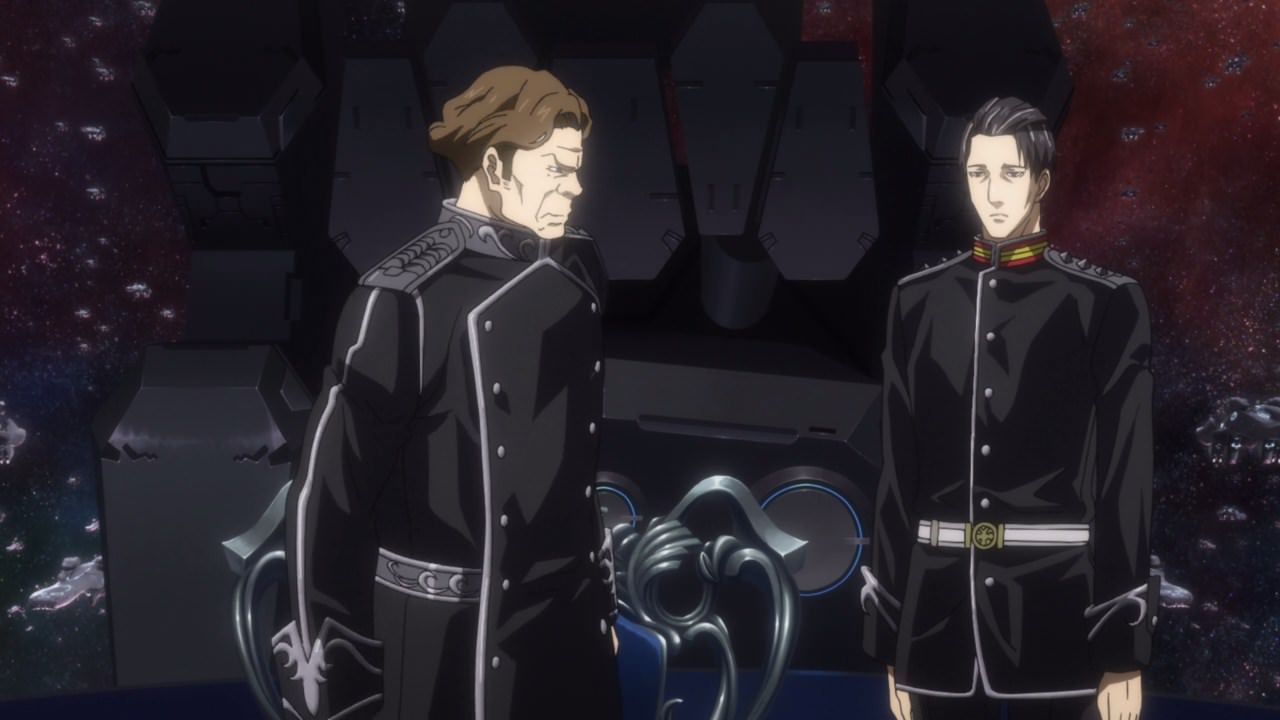 Unfortunately for Admiral Hans Dietrich von Seeckt, he decides to go back at the Alliance-held Iserlohn Fortress, ignoring Captain Paul von Oberstein’s suggestions on not to return to the corridor as it’s a trap.

Man, it’s not just the Free Planets Alliance who have incompetent officers but also the Galactic Empire. I guess the Goldenbaum Dynasty appointing those blue blooded individuals in military positions, despite having little to no knowledge about war and tactics, is truly baffling. 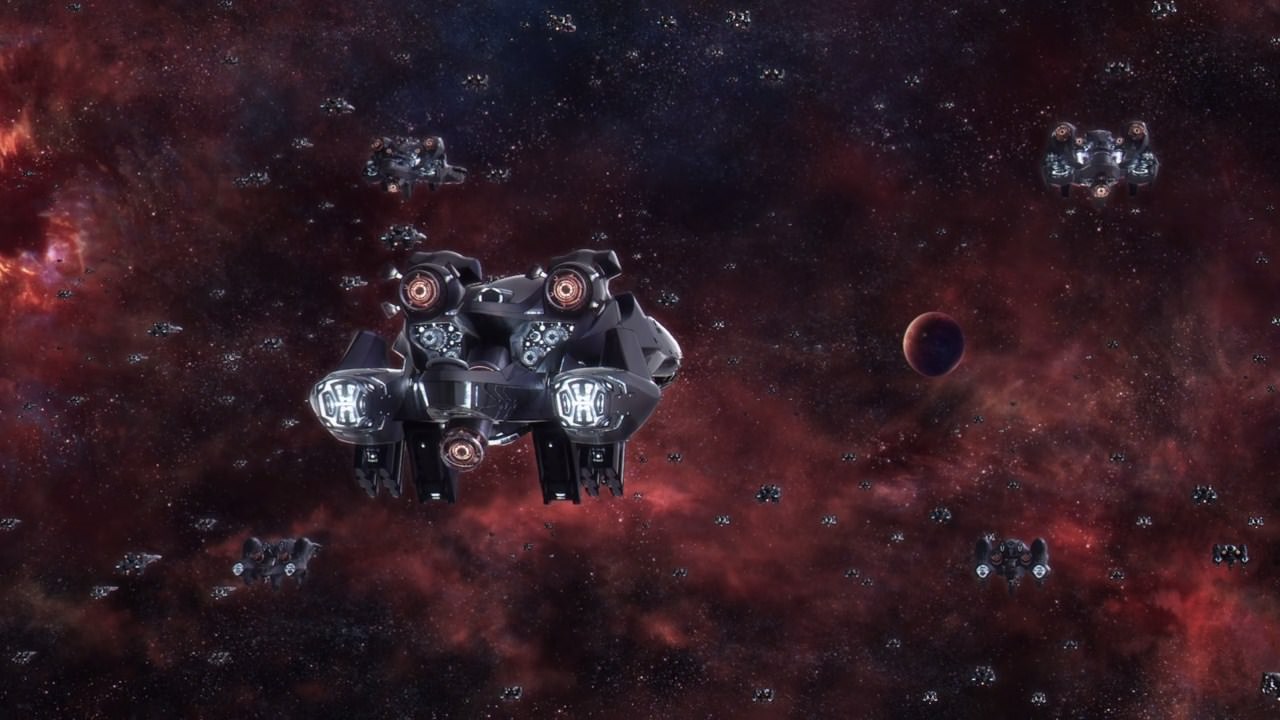 Thus, Admiral Seeckt’s fleet has decided to return to the Iserlohn Fortress, not knowing that the 13th Fleet have already taken over the impregnable fortress.

As for Captain Oberstein, he left Admiral Seeckt’s flagship because it’s a waste of time talking with a shallow-minded buffoon. 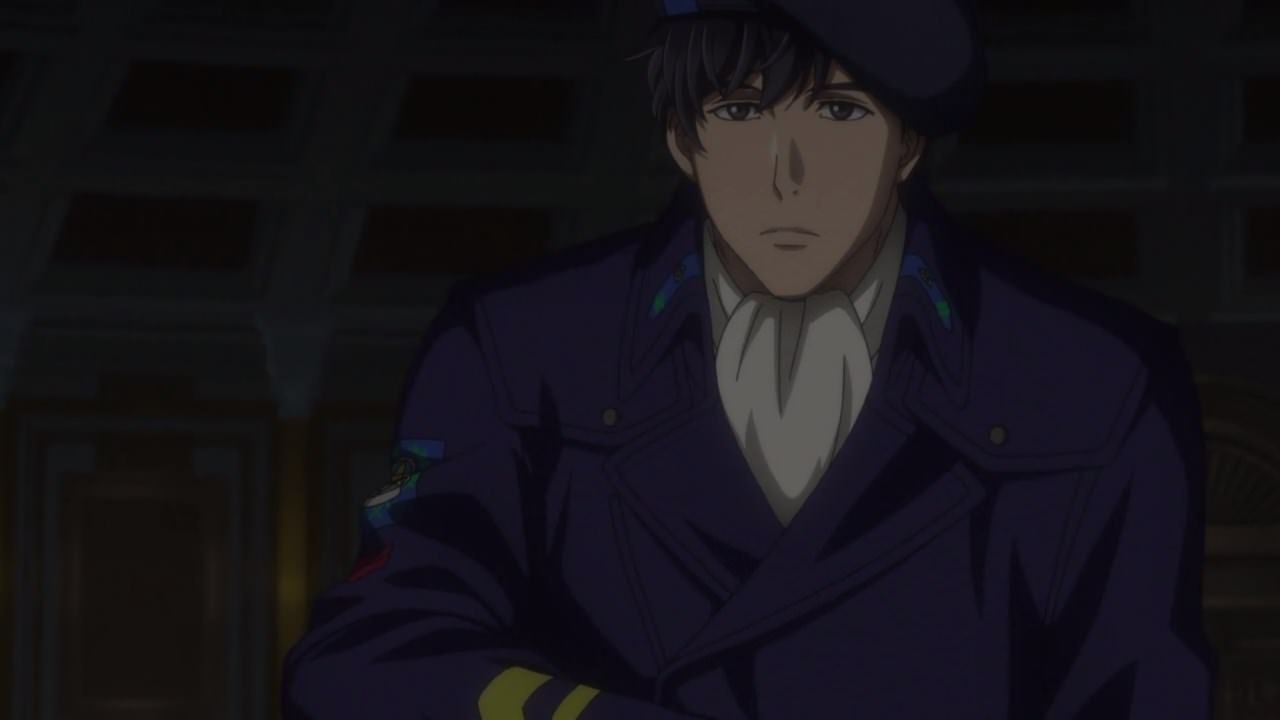 With the Fortress Garrison Fleet returning to the fortress, it seems that the only logical conclusion for Rear Admiral Yang Wen-li is to force them to retreat should they continue their advance.

I mean, it’s bad judgment to charge towards the enemy despite having an advantage like capturing a fortress for example! 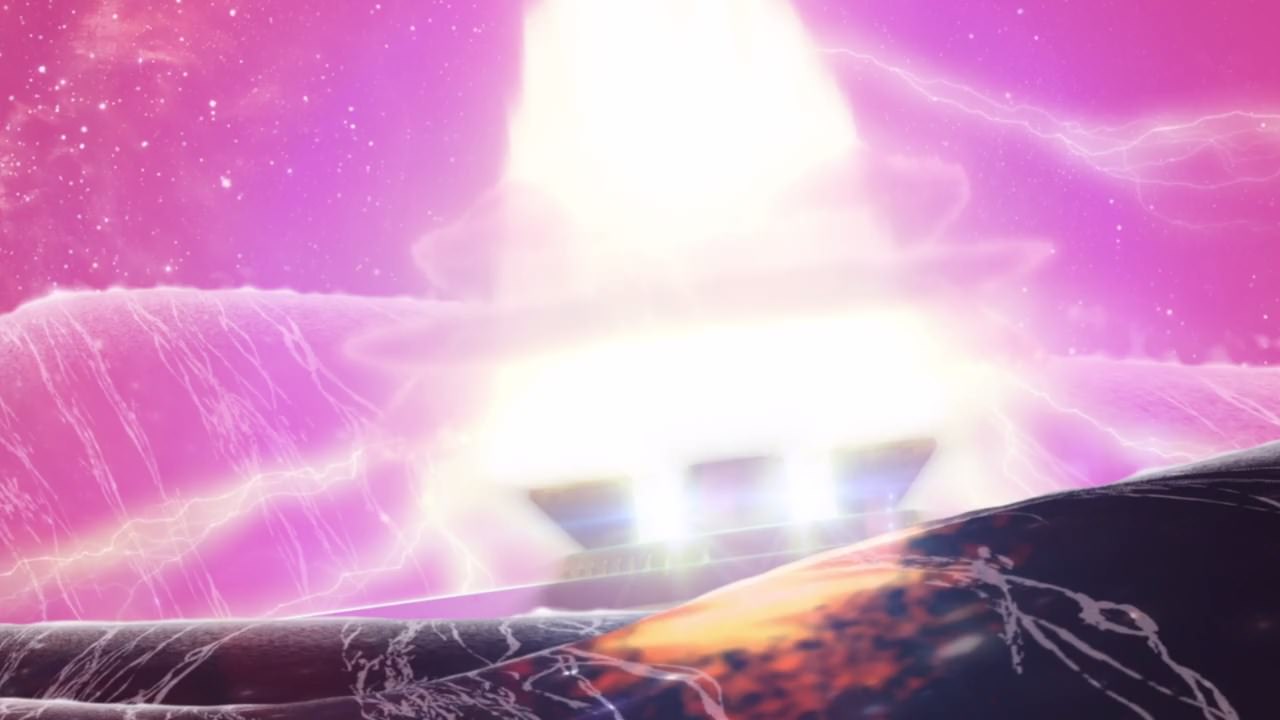 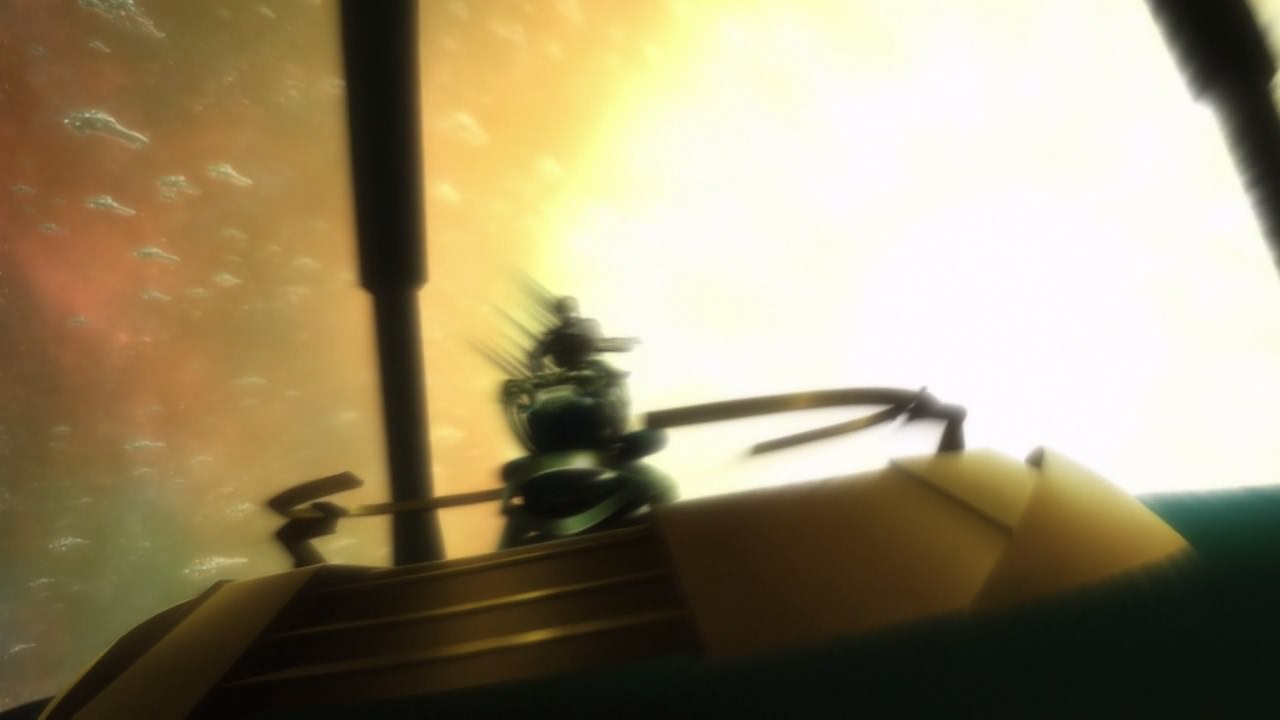 And as for the Fortress Garrison Admiral, he didn’t stand a chance as Hans Dietrich von Seeckt and his ship goes down with it! 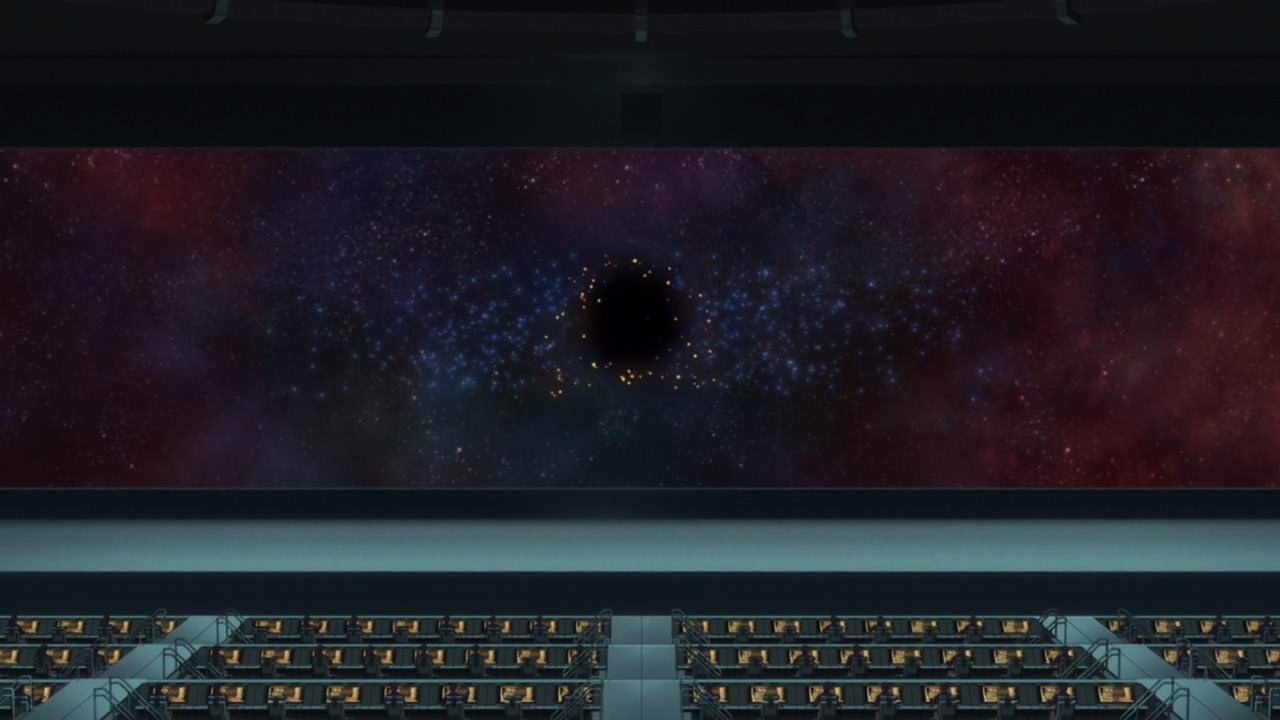 And so, the Fortress Garrison Fleet will make their retreat now that their flagship has been destroyed. Thus, the battle to capture the Iserlohn Corridor is finally over.

I have to say that it was a major victory for the Free Planets Alliance as they managed to pull an impossible task thanks to Rear Admiral Yang Wen-li’s 13 Fleet and the Rosen Ritter. Hell, I give kudos to Captain Walter von Schönkopf for completing a mission in a badass way! 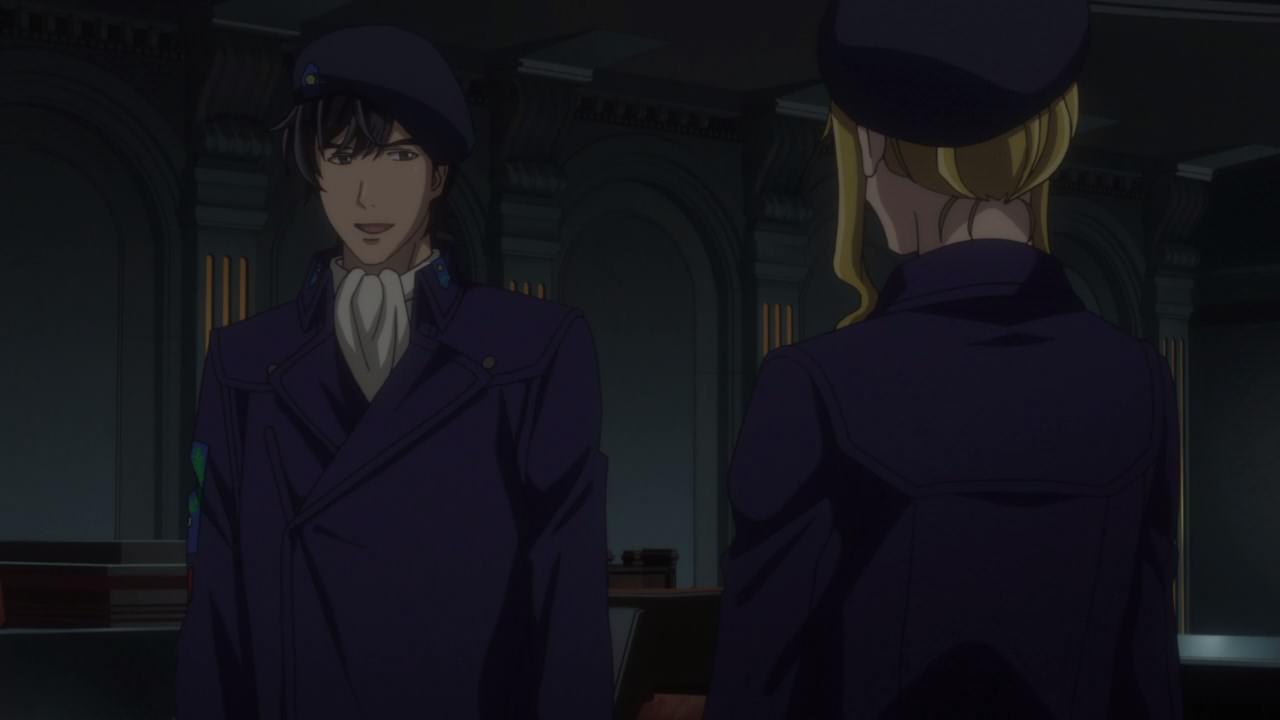 For Rear Admiral Yang Wen-li, it seems that his reputation towards Chairman Job Trunicht and his supporters will be normalized as they’ll be forced to recognize him for his military achievements.

However, I think it’s time for Yang Wen-li to retire early as he told Sub-lieutenant Frederica Greenhill that he won’t pull another impossible stunt again. I mean, it’s stressful to handle war that Rear Admiral Yang will have to grab a bottle of whiskey and drink his sorrows away for killing millions of people. Then again, how long will his retirement last? 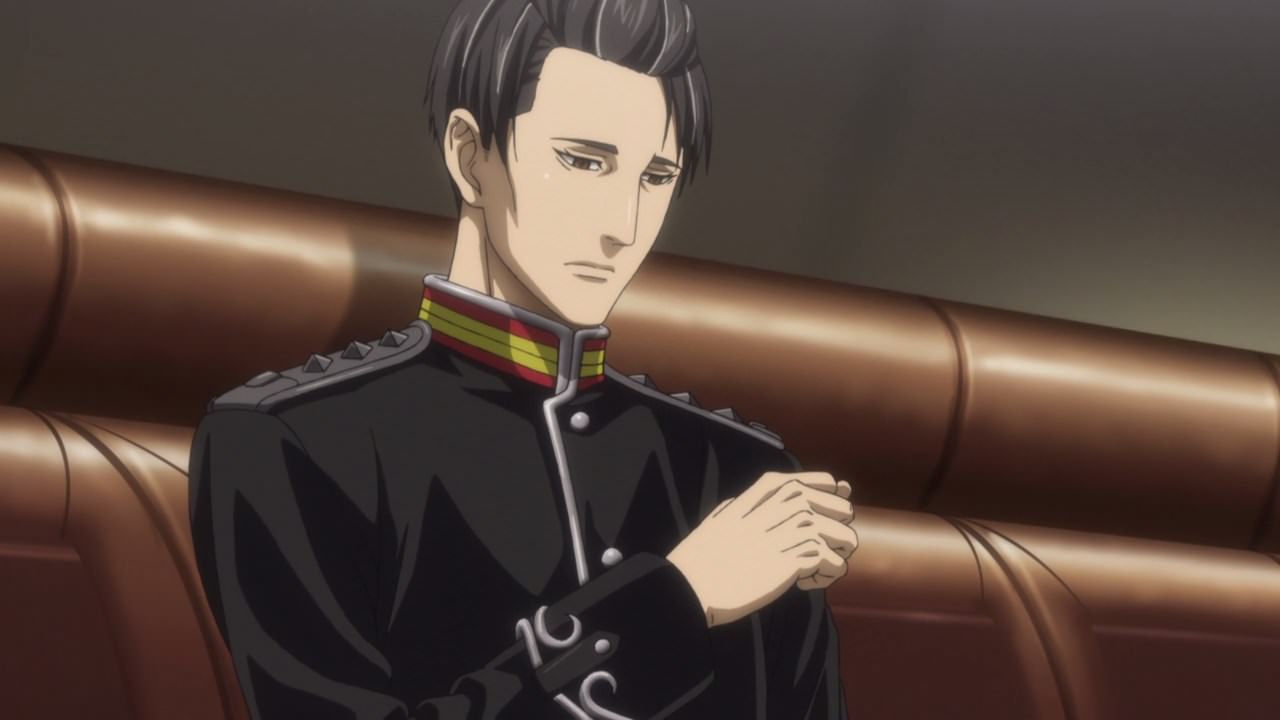 As for Captain Paul von Oberstein, he managed to escape safely but the higher-ups will blame him for losing the Iserlohn Fortress and letting Admiral Hans Dietrich von Seeckt killed by the powerful Thor Hammer.

Well, Captain Oberstein did nothing wrong, it’s just that the Fortress Garrison Admiral is so stupid that’s all! 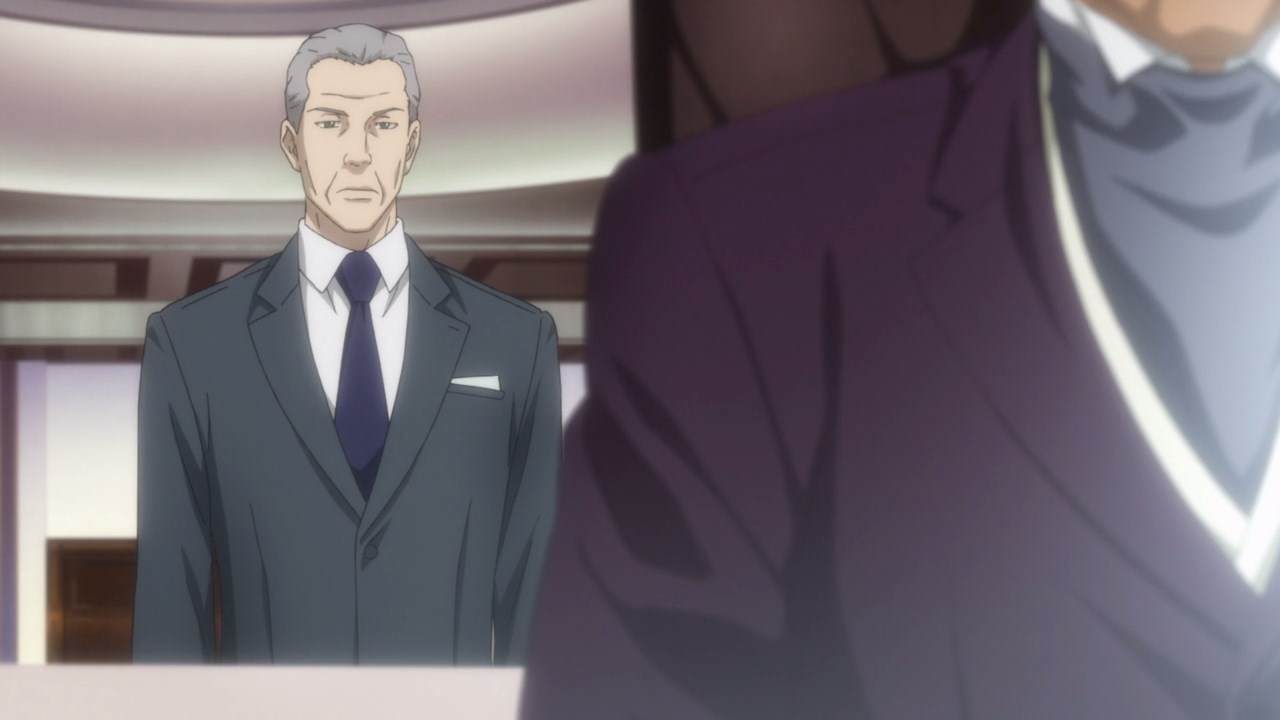 Meanwhile in the Dominion of Fezzan, Nicholas Boltik told the Landesherr that the Iserlohn Fortress was captured by the Free Planets Alliance, all thanks to Rear Admiral Yang Wen-li and his brilliance on the battlefield.

Now then, who is this Landesherr of the Dominion if you may ask? 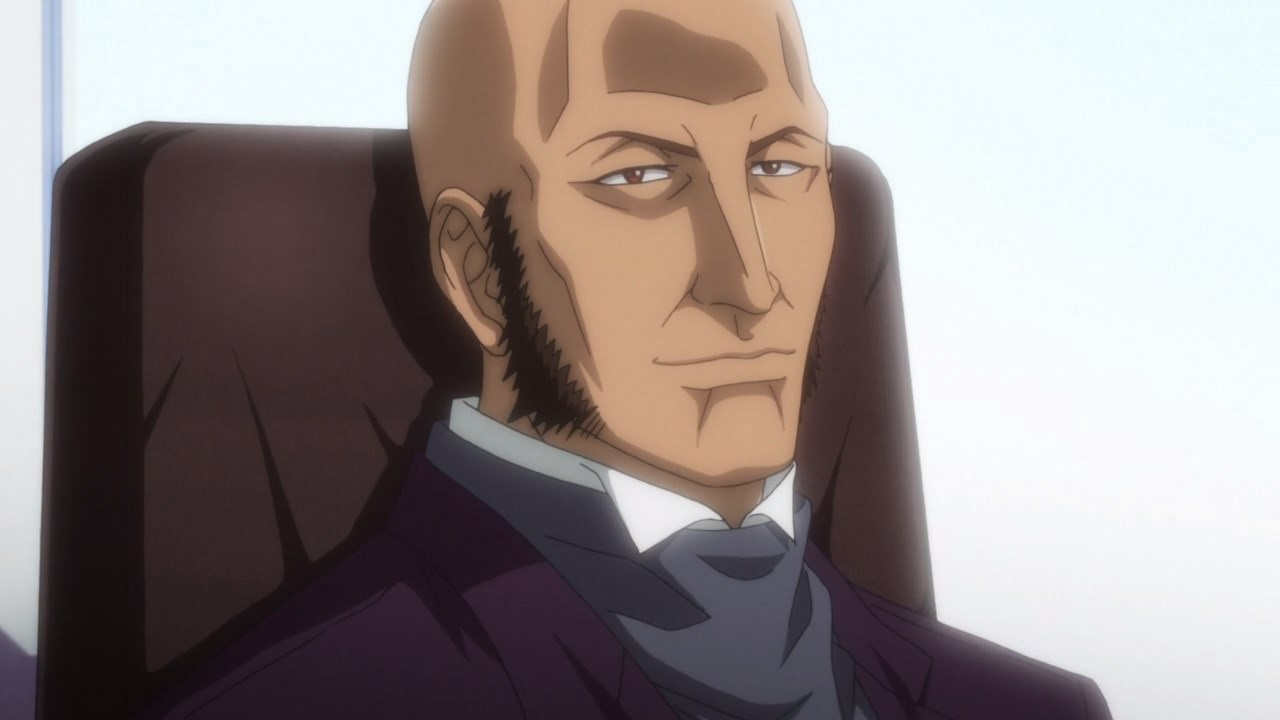 Well, it’s none other than Adrian Rubinsky as he’s interested in Yang Wen-li ever since he saw how the Rear Admiral managed to avoid a total defeat during the Battle of Astarte. Then again, I feel that Adrian Rubinsky is quite mysterious.

Anyways, that’s about it for this episode as I’ll see you next time. I can’t wait for the Galactic Empire to react, especially Fleet Admiral Reinhard von Lohengramm.