We got some great news on this episode as Koyume Koizuka got her manga serialized. Congratulations to Koisuru Koyume, I have to say that she did improve much from the first episode! 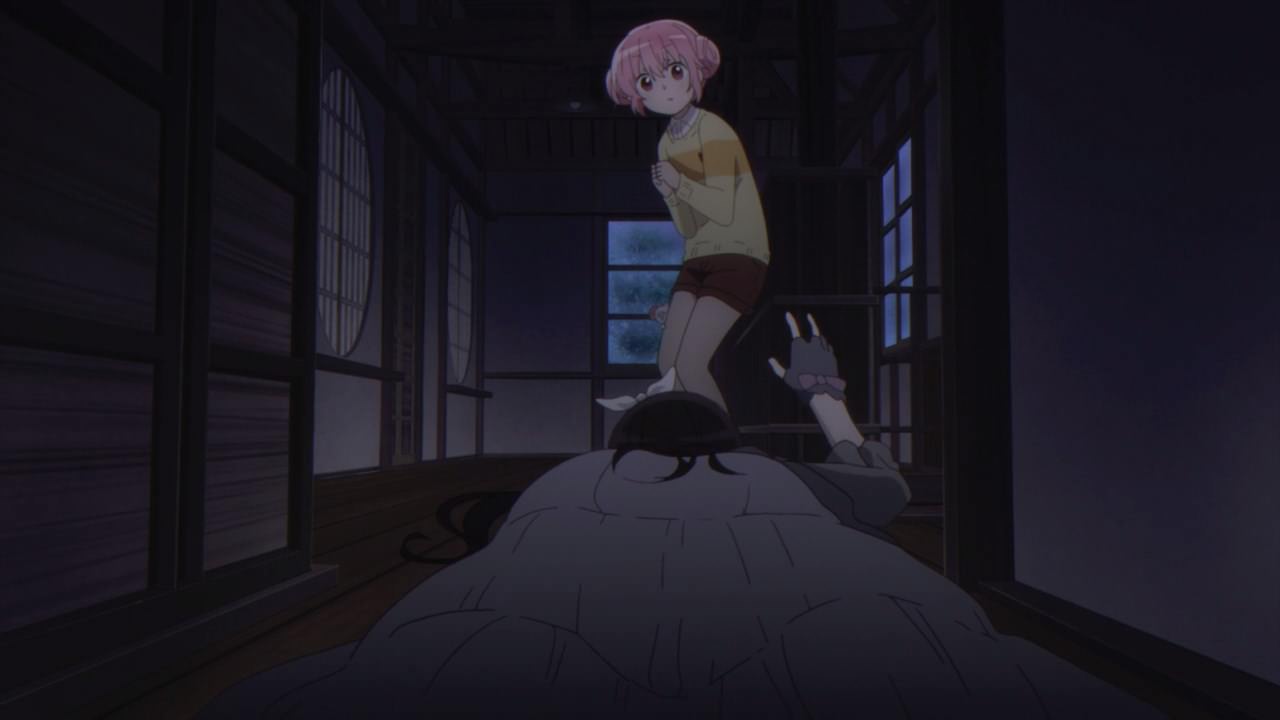 That leaves Kaoruko Moeta the only one who doesn’t have a serialized manga. However, seems that she’ll encounter something horrible… 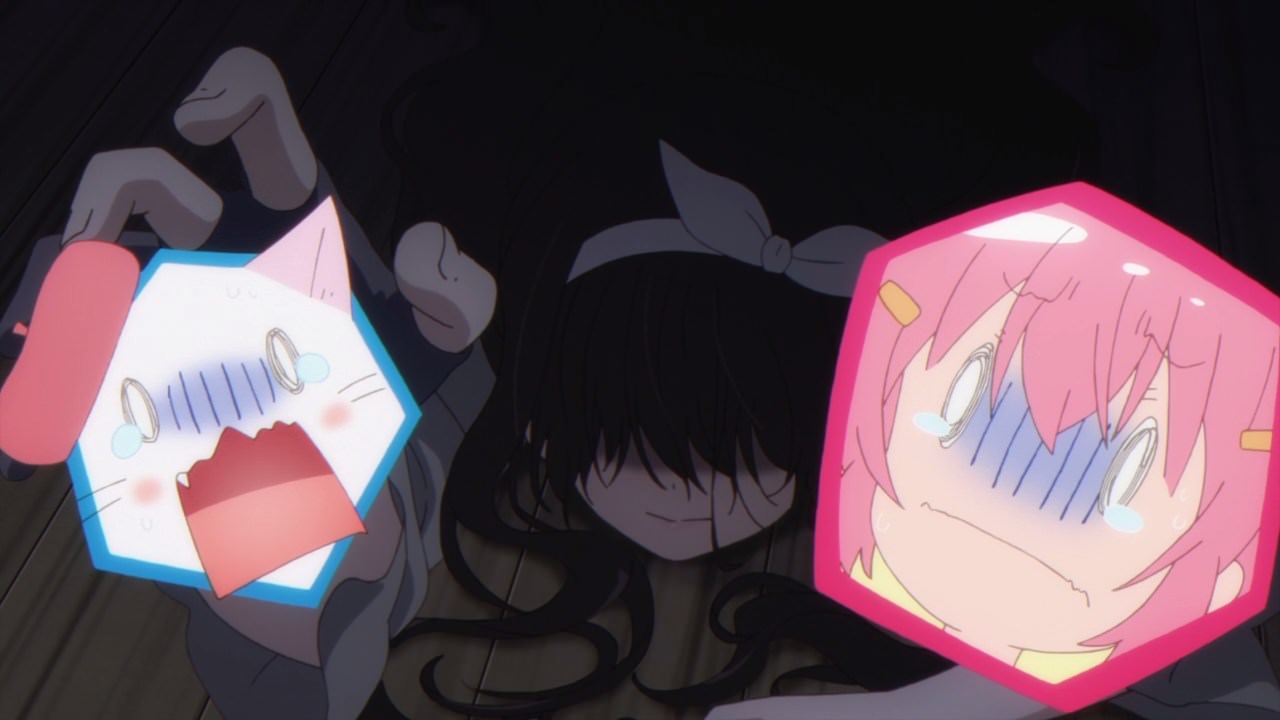 …or should I say a familiar sight as Suzu Fuura is crawling on the floor, begging to sacrifice a person who can finish her manga.

I have to say that not only Kaos-sensei is afraid, but also Nyaos who’s also afraid! But you know what, let’s help Fuura-sempai. 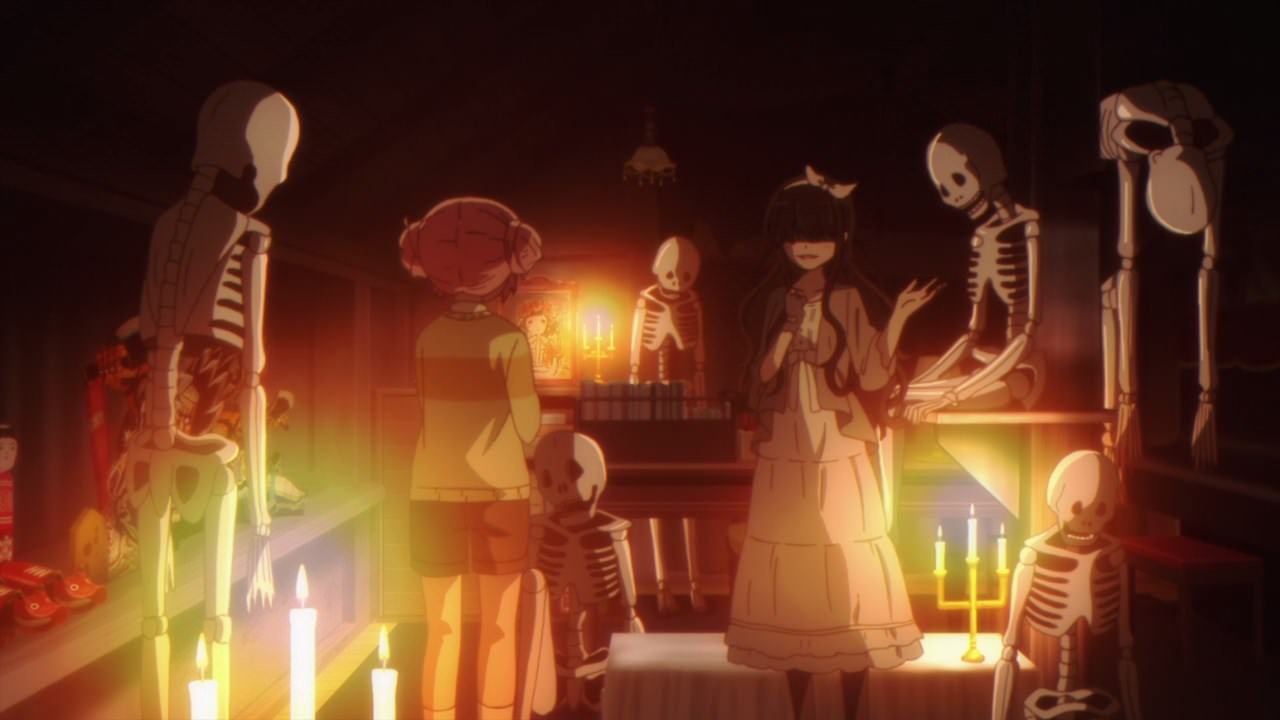 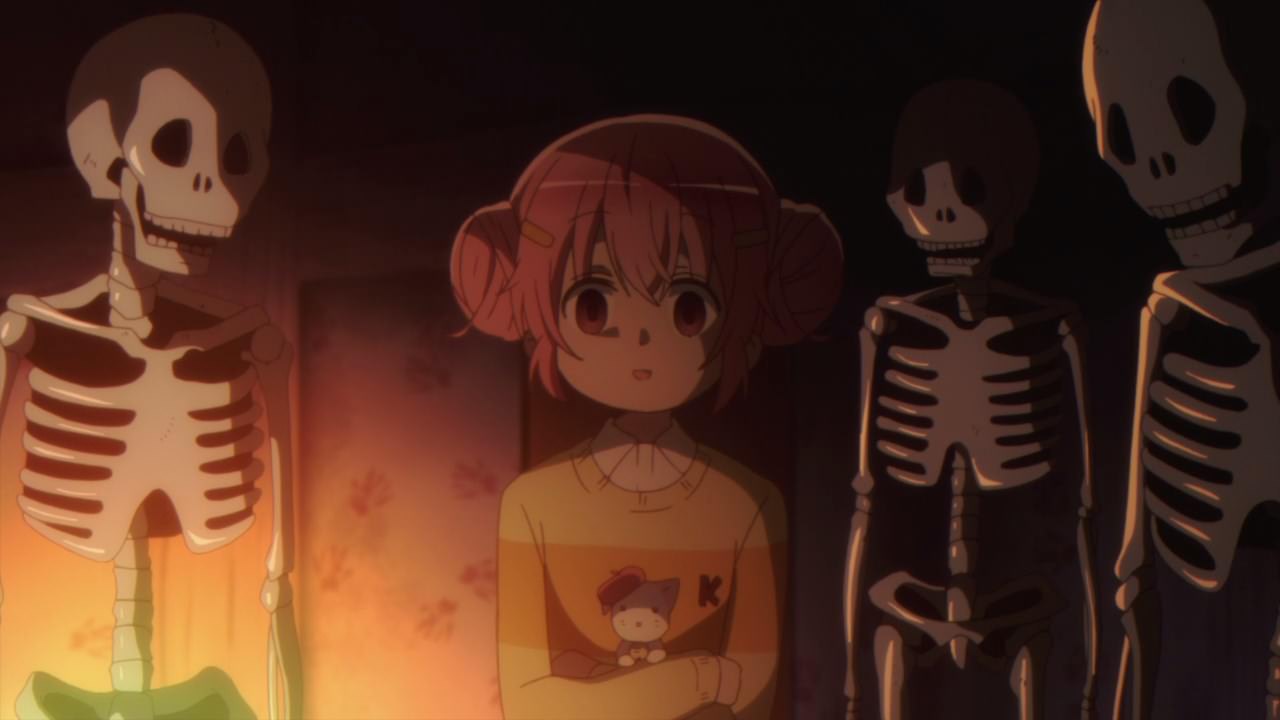 Unfortunately for Kaos-chan, Suzu Fuura’s room at the attic is both surreal and creepy that Kaoruko Moeta simply fainted at the sight of skeletons and dolls.

By the way, Suzu Fuura came from the Tohoku region, specifically Aomori prefecture, which is the same region that Kaoruko Moeta came from. 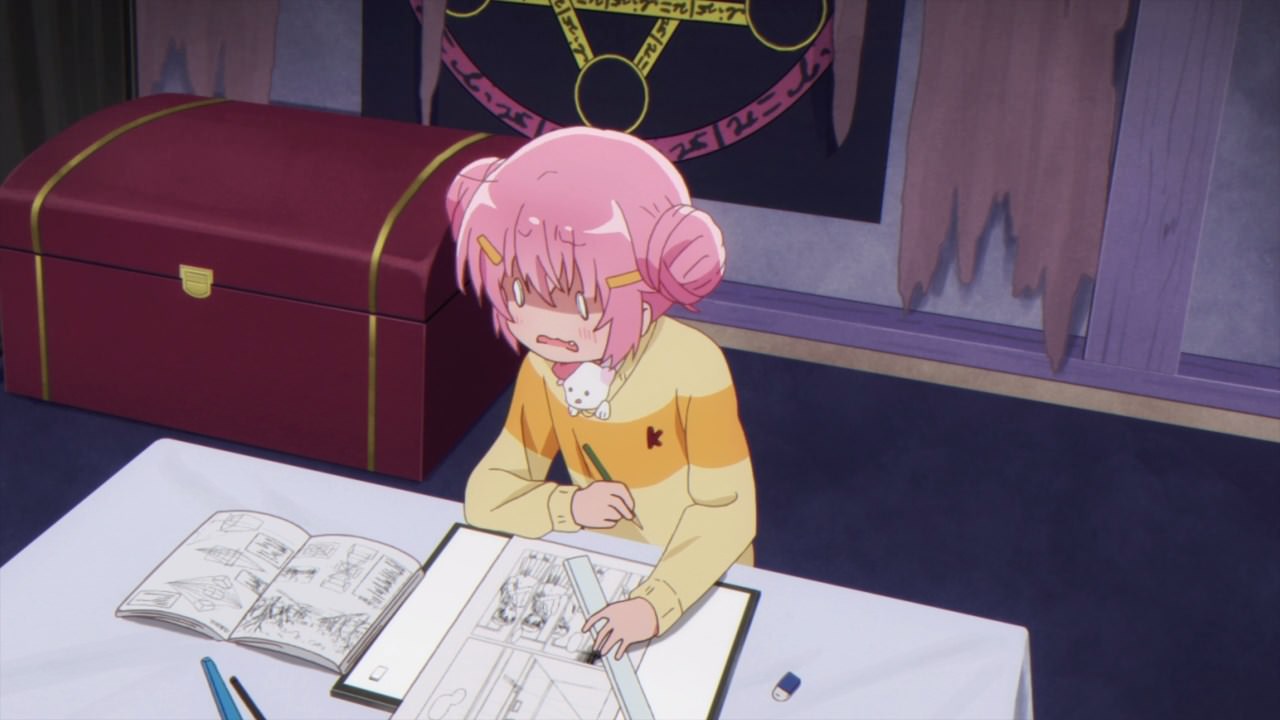 Anyways, Kaoruko Moeta will help Suzu Fuura by drawing the background. Well, it’s the only thing that she could do because inking and putting screentone is out of the question.

C’mon, Kaos-chan has a weak heart when it comes to handling creepy imagery. 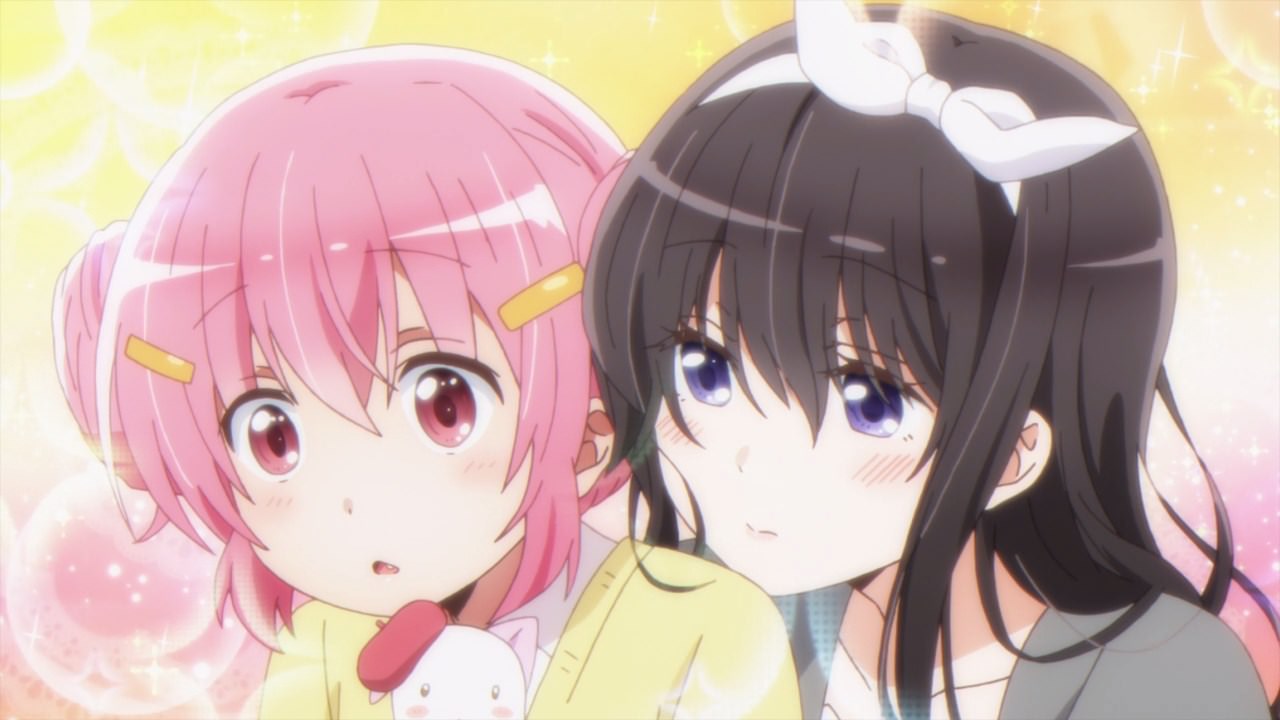 On the other hand, here’s Fuura-sempai as she’s teaching Kaos-sensei on how to draw better backgrounds. I must say that Fuura-sempai is still cute up-close. 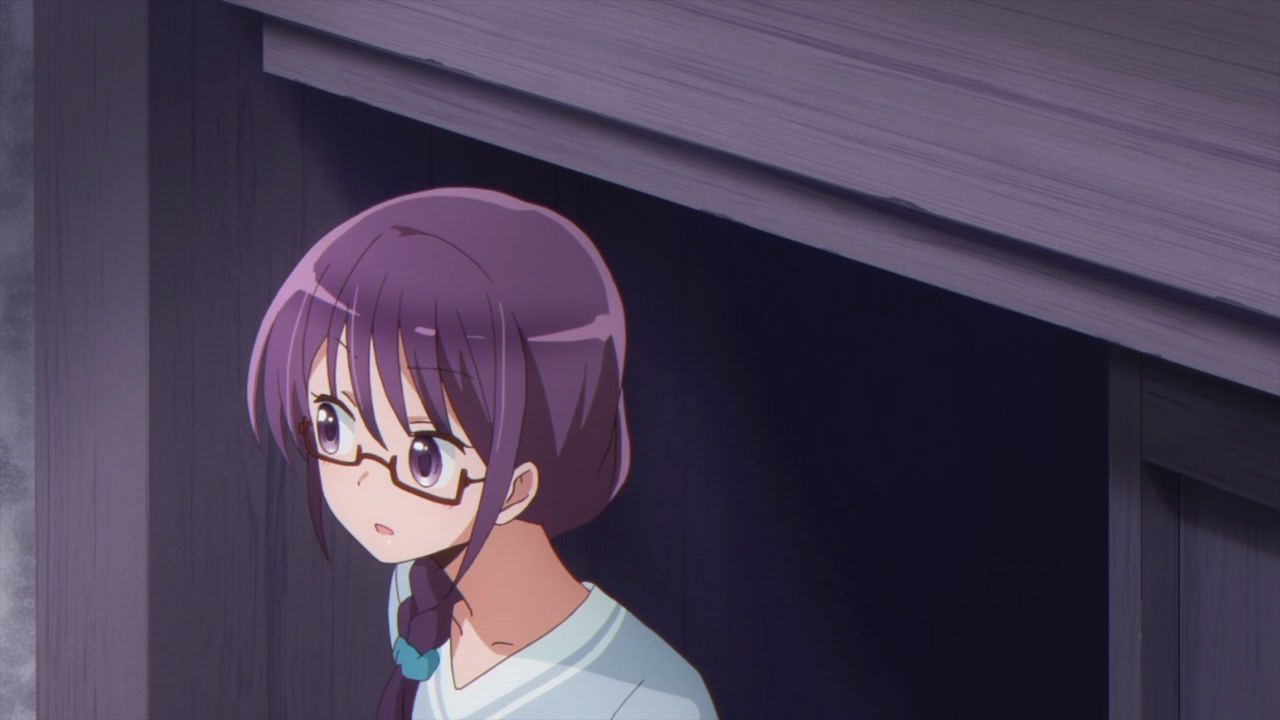 Now then, here’s Ruki Irokawa as she’s checking on whether Kaoruko Moeta is okay or not. 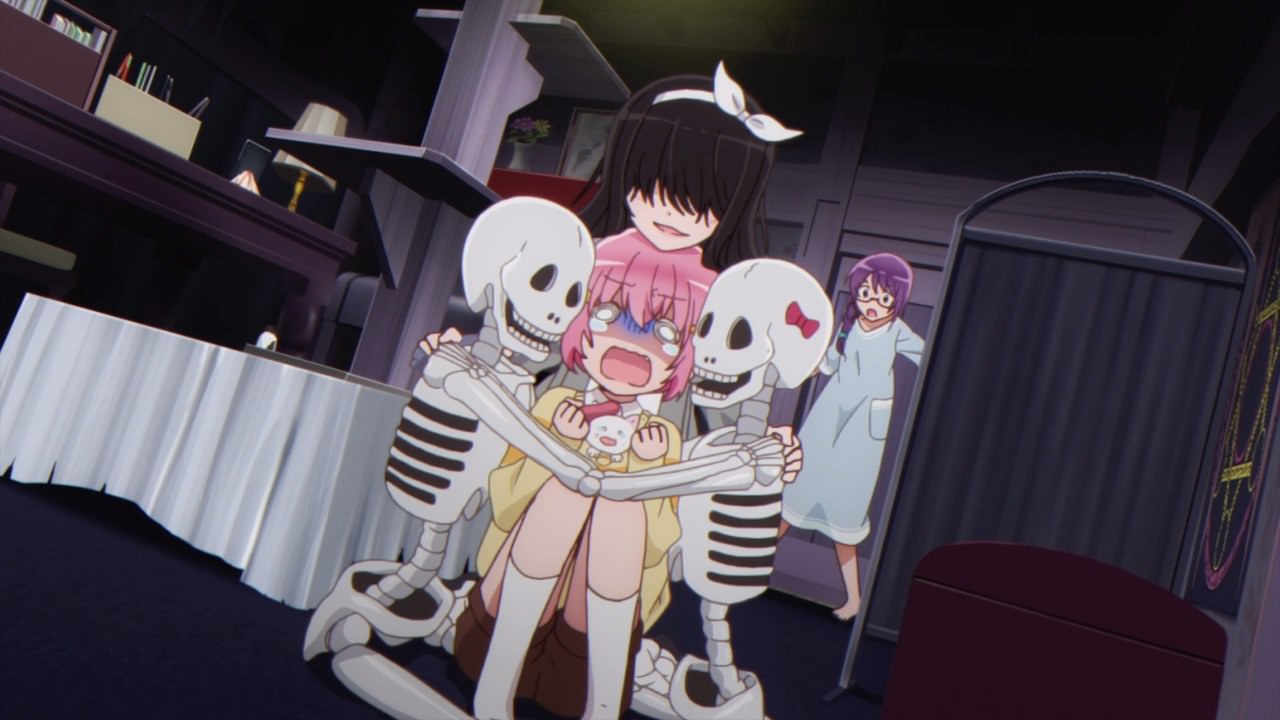 However, seems that Kaos-sensei is not okay as she’s surrounded by skeletons. Um Fuura-sempai, you shouldn’t bring your skeletons and gave it to Kaos-chan.

By the way, it looks like Kaos-chan’s drawing skills has improved thanks to Suzu Fuura, so it’s not like she didn’t do anything. 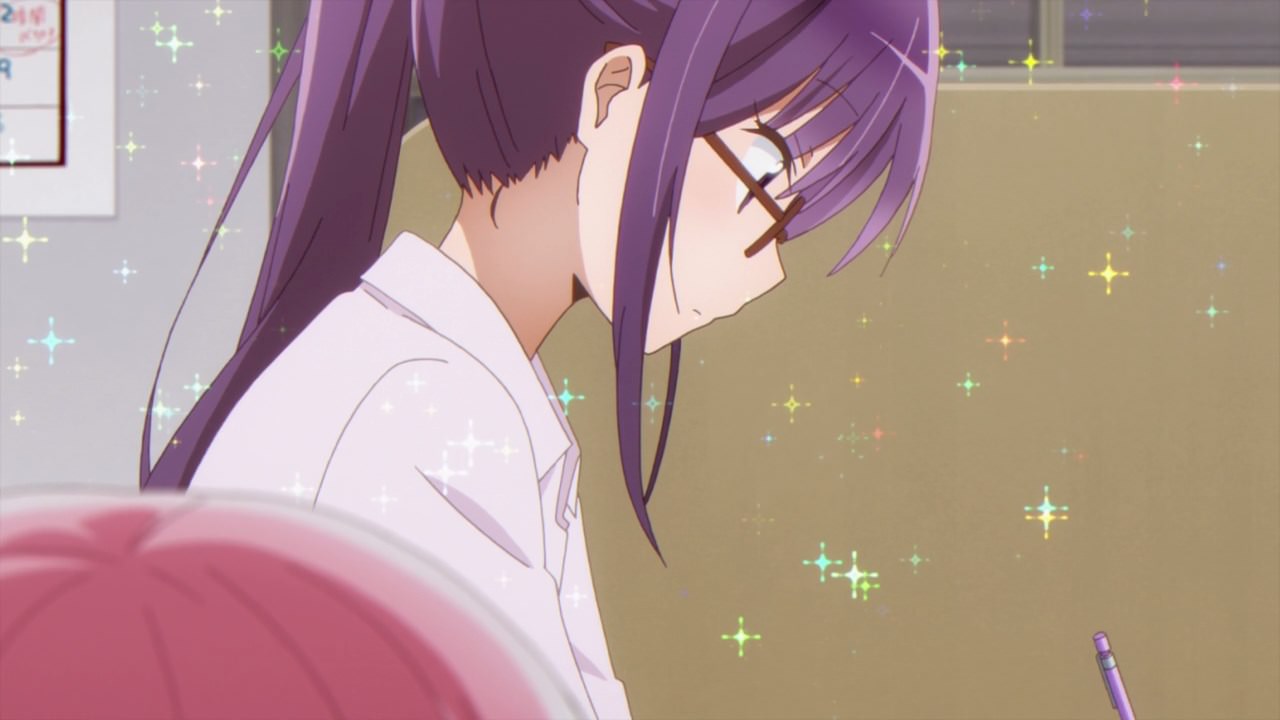 But let’s talk about Ruki Irokawa as she’s currently wearing glasses that Kaos-sensei is fascinated by her. 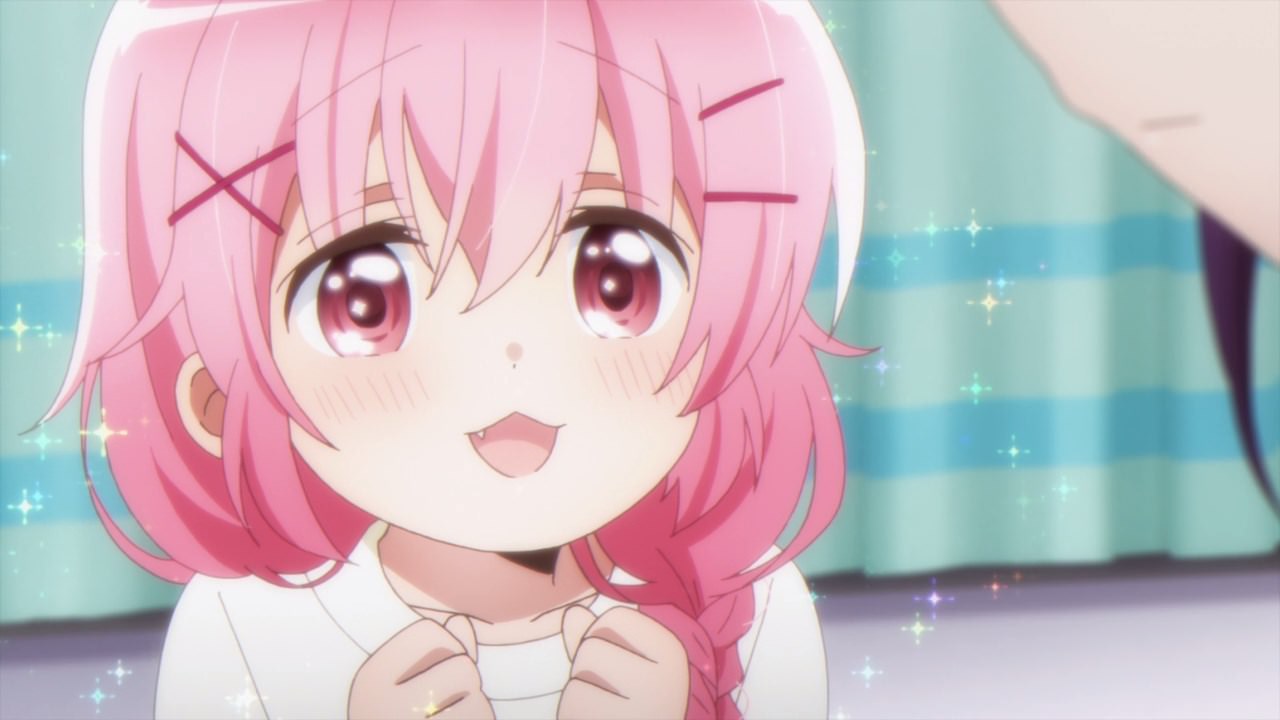 I mean, look at her astonishing expression. She knows that Rukki looked so moe with her glasses on. 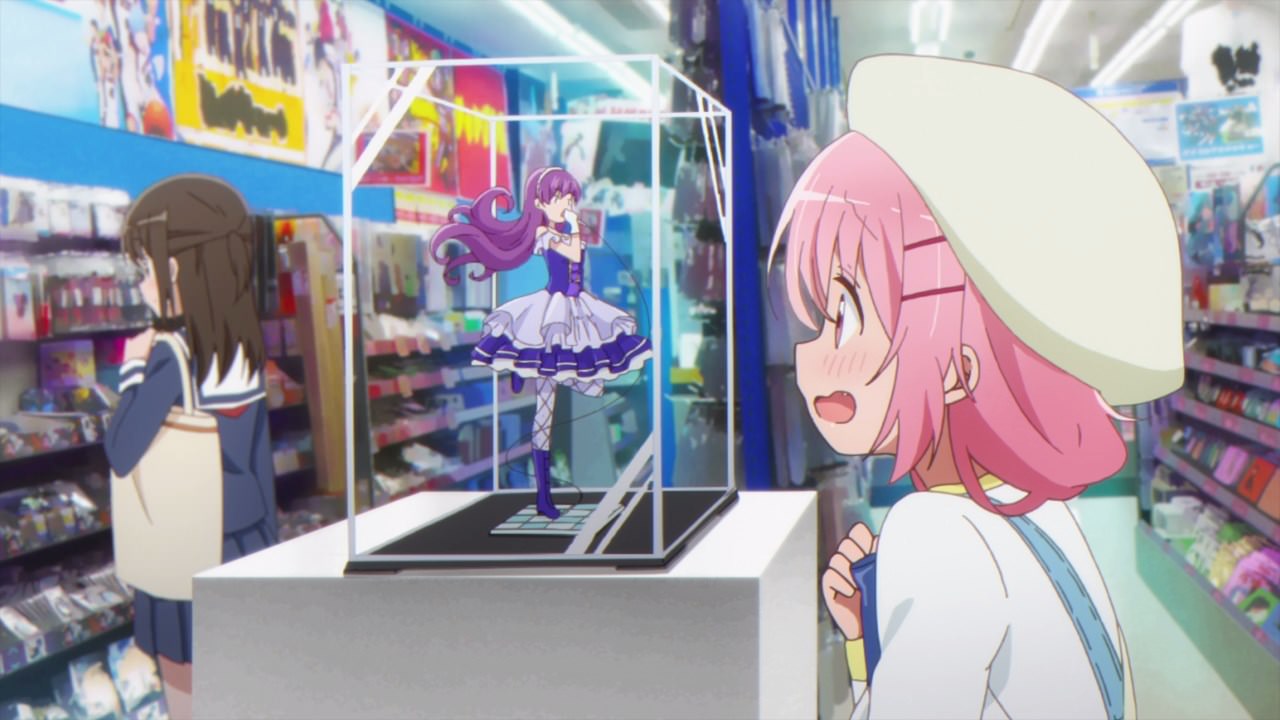 So, Kaos-sensei went to the holy place called Akihabara in order to become a holier person… by buying anime figures of course.

Um Kaos-chan, are you supposed to buy glasses since you’re inspired by Ruki Irokawa to wear one? Then again, Kaos-chan wants to go for her hobbies first. 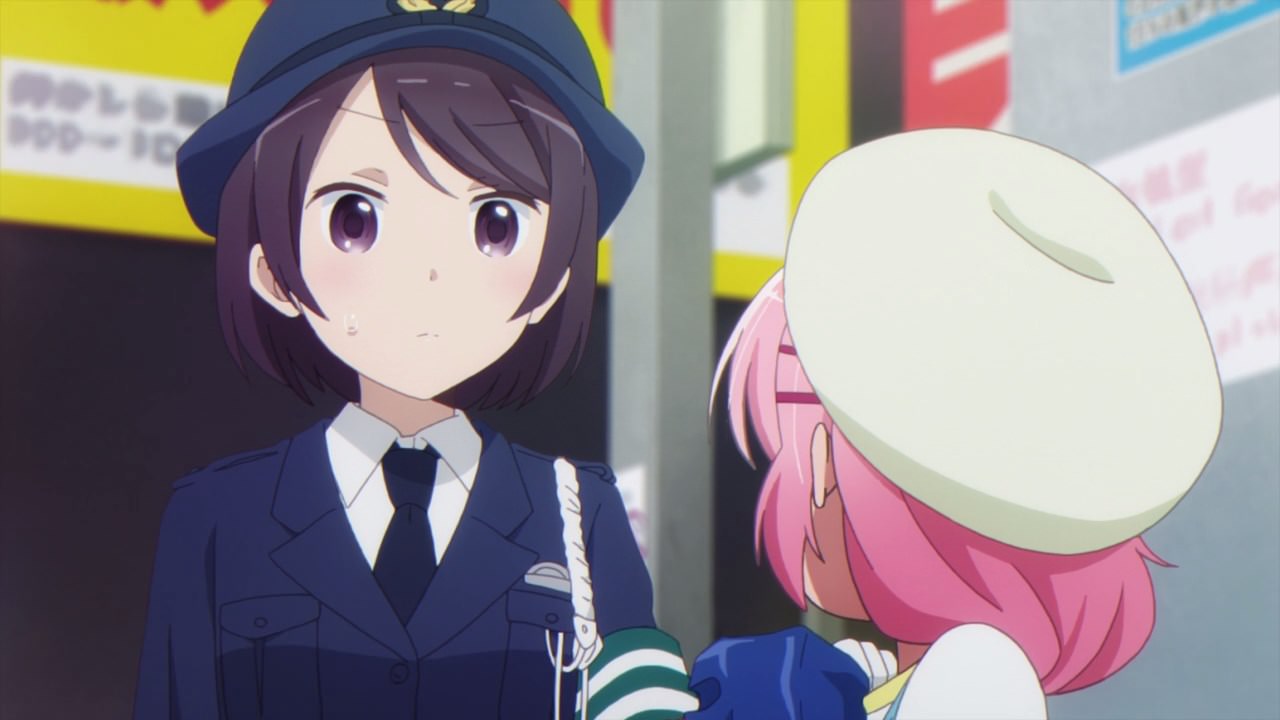 After buying some figures, Kaoruko was caught by a policewoman which she ask Kaos-chan on where her parents are. 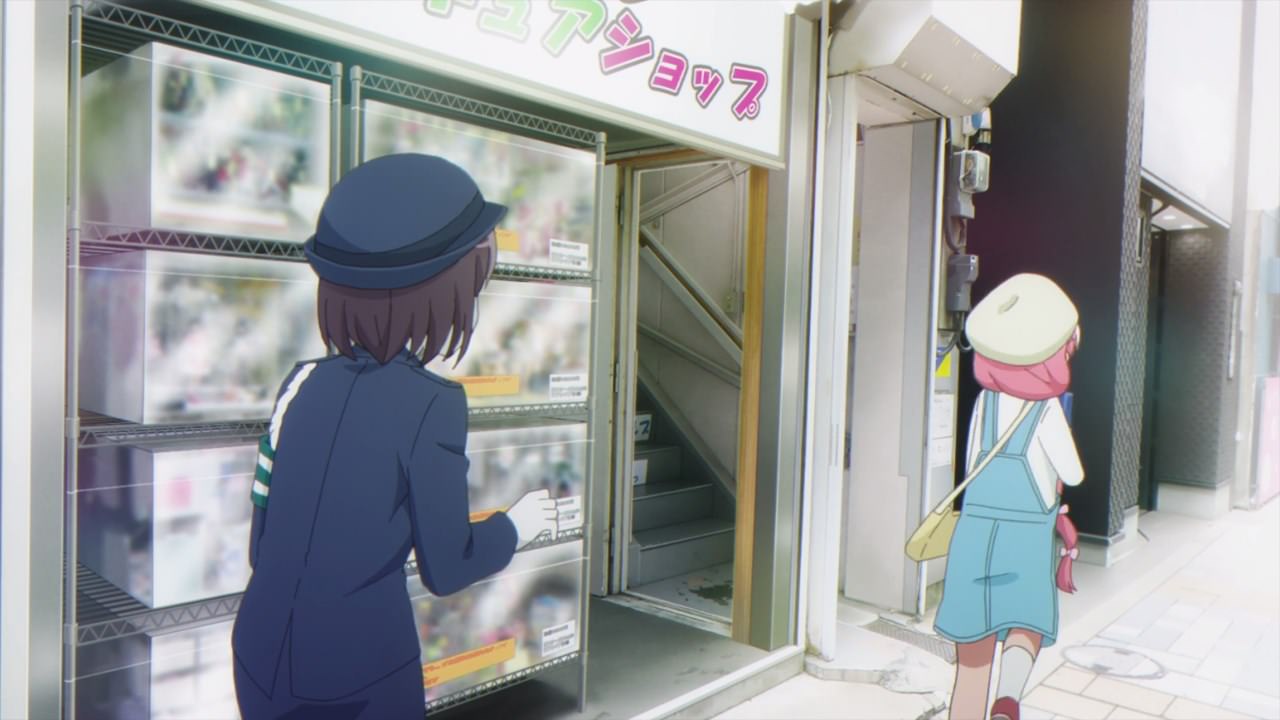 Anyways, Kaos-sensei ran away from the police because she doesn’t want to be placed in the lost and found section.

Then again, I think Kaos-chan will get lost as she doesn’t know how to get back home. I mean, Akihabara is a big place. 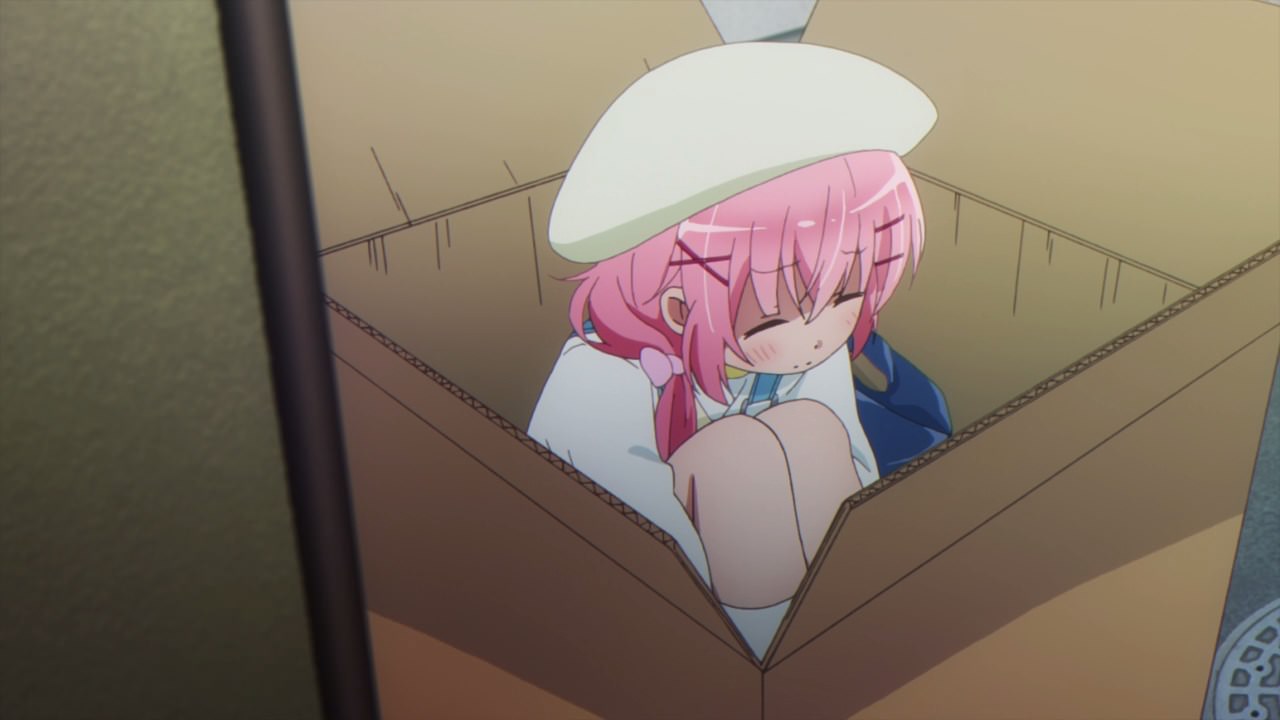 And so, Kaoruko Moeta went into hiding in hopes that someone would find her like a lost kitten. 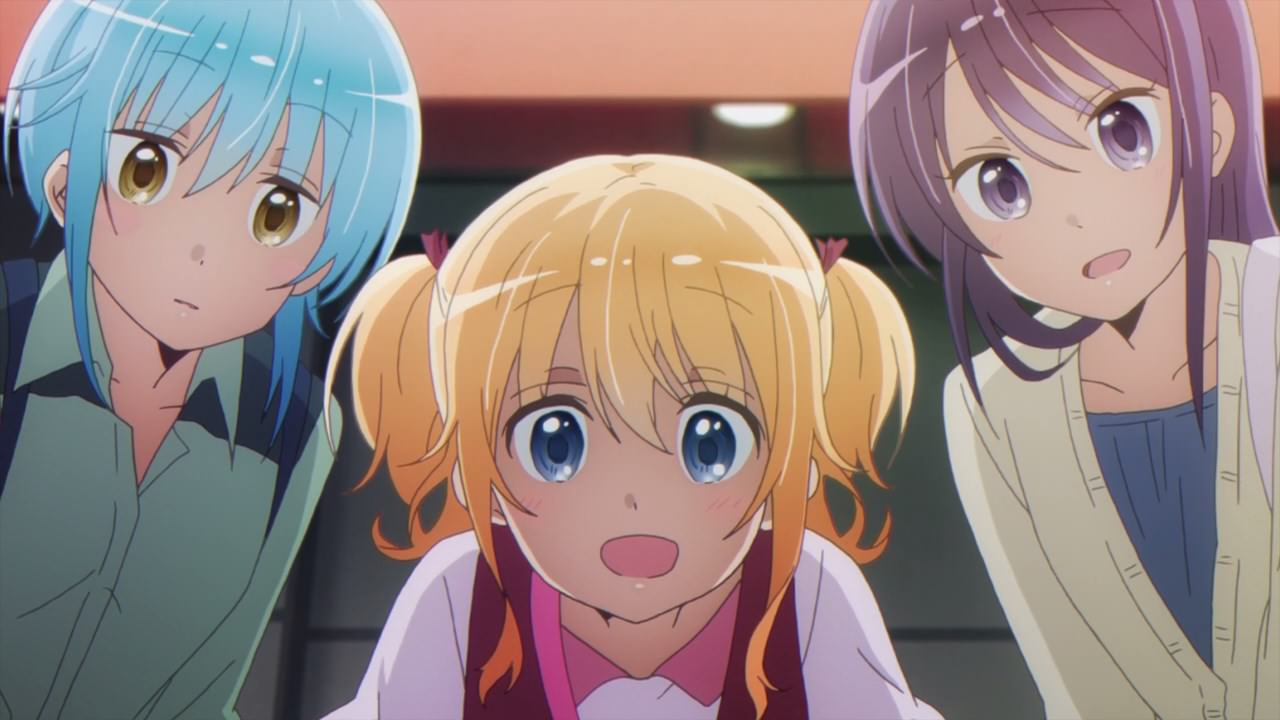 Fortunately, her friends have managed to find her after seeing her tweets. Well, at least she won’t have to go to a police station and call her parents to pick her up 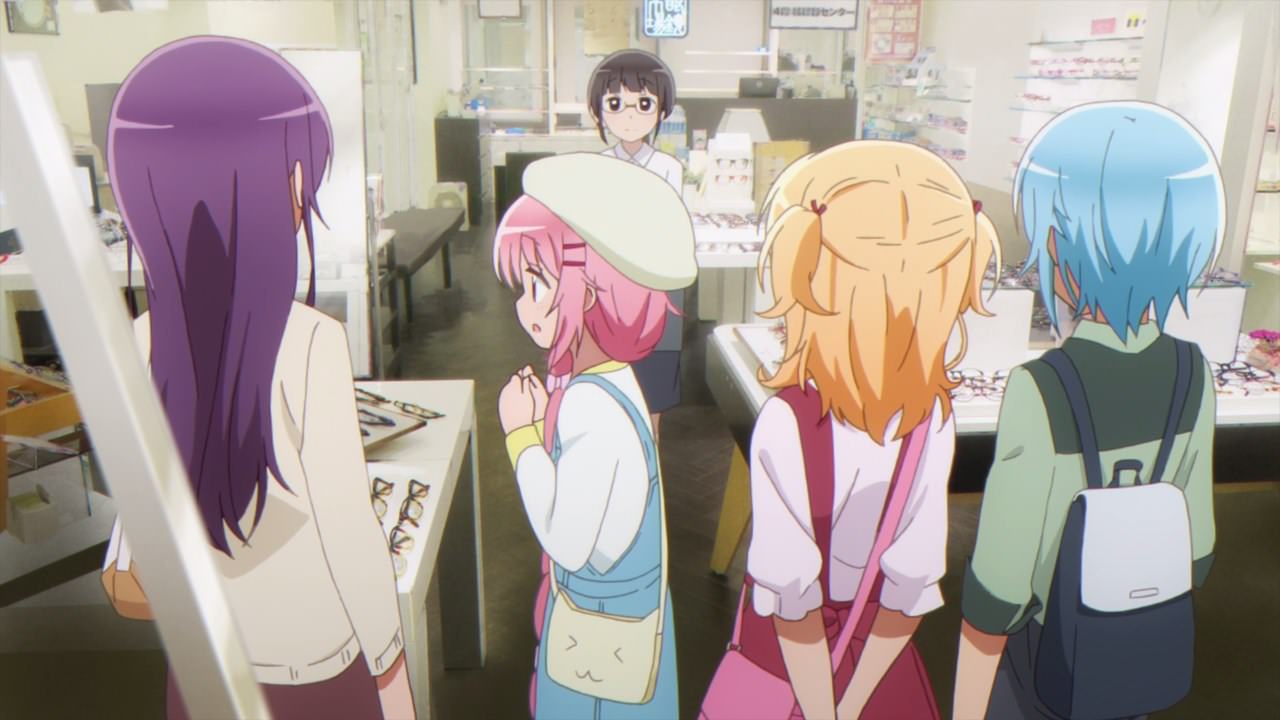 Afterwards, they went to an eyeglasses shop where Kaoruko Moeta will try out some glasses that’ll suit her taste.

Of course in truth, the reason why she needs glasses is to lessen the eye strain, which is helpful when Kaos-sensei is using a computer. 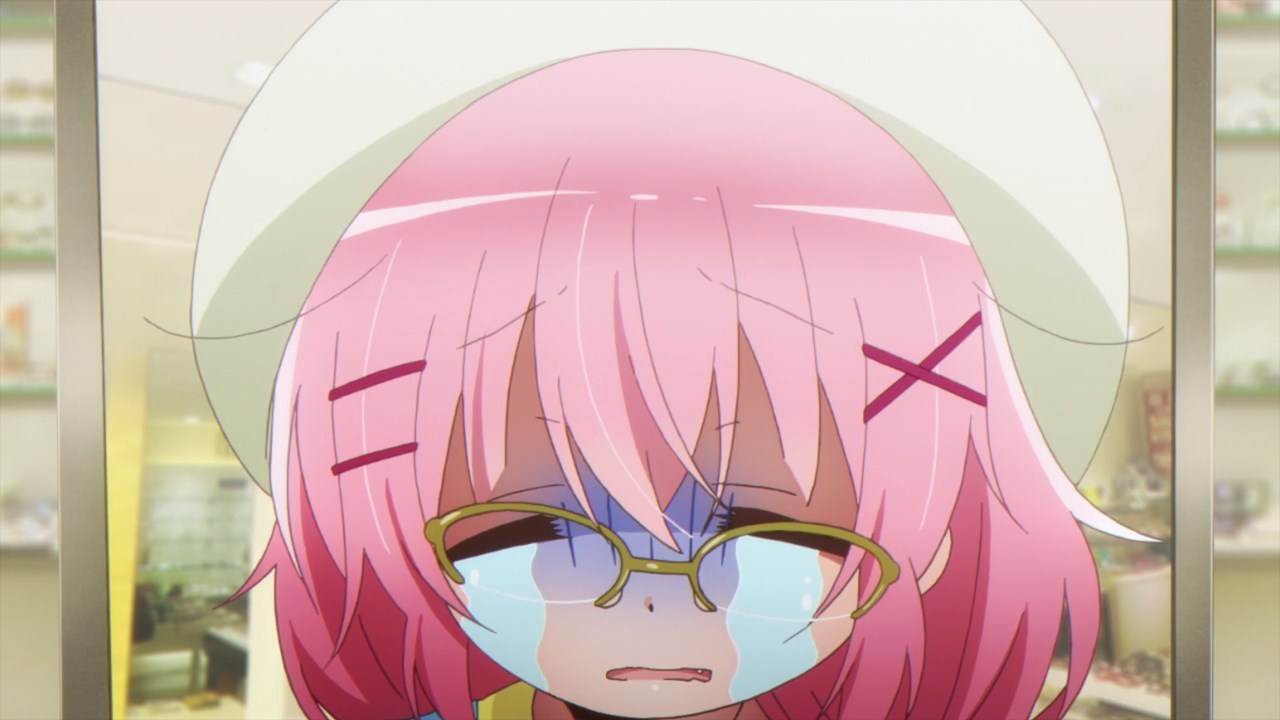 But then again, Kaos-chan is conscious about her style rather than her health. What, you want to make yourself look moe with glasses? 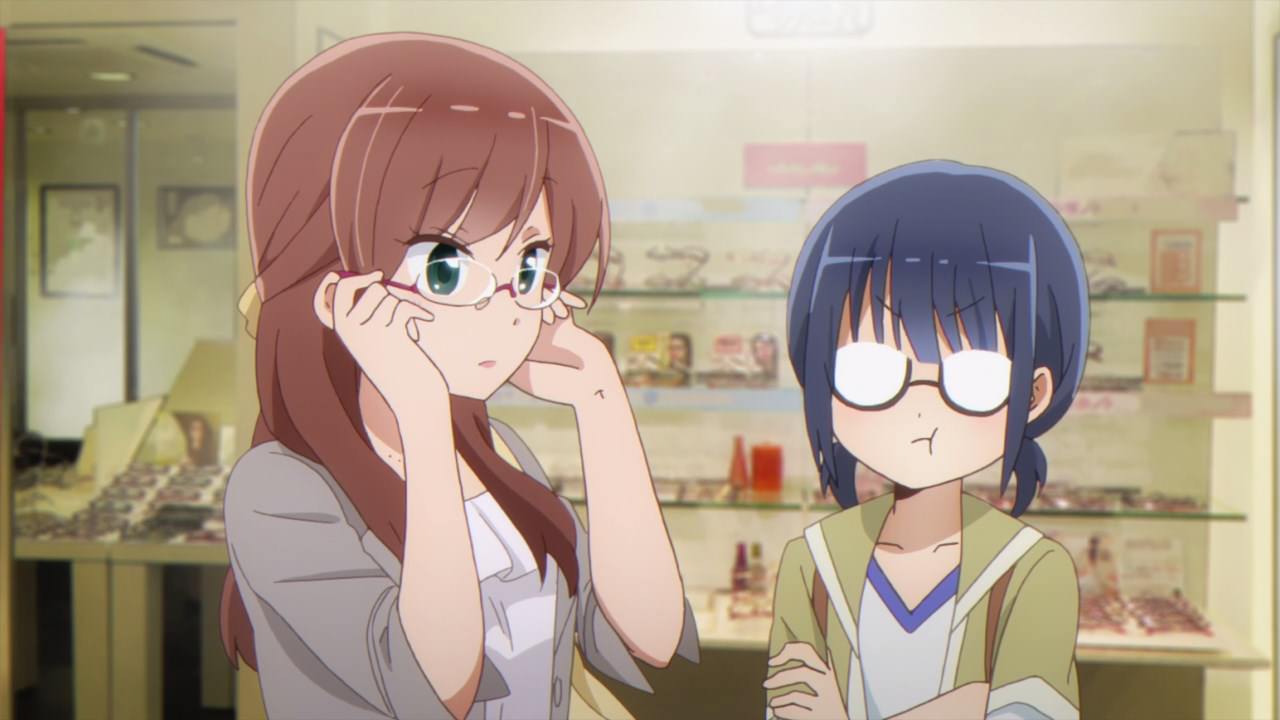 Meanwhile, here’s Mayu Amisawa as she brought Miharu Nijino to get some eyeglasses. Then again, Nijino-sensei wants to wear glasses so she can be like a real teacher.

Um girls, eyeglasses are used to correct your vision and reduce eye strain. 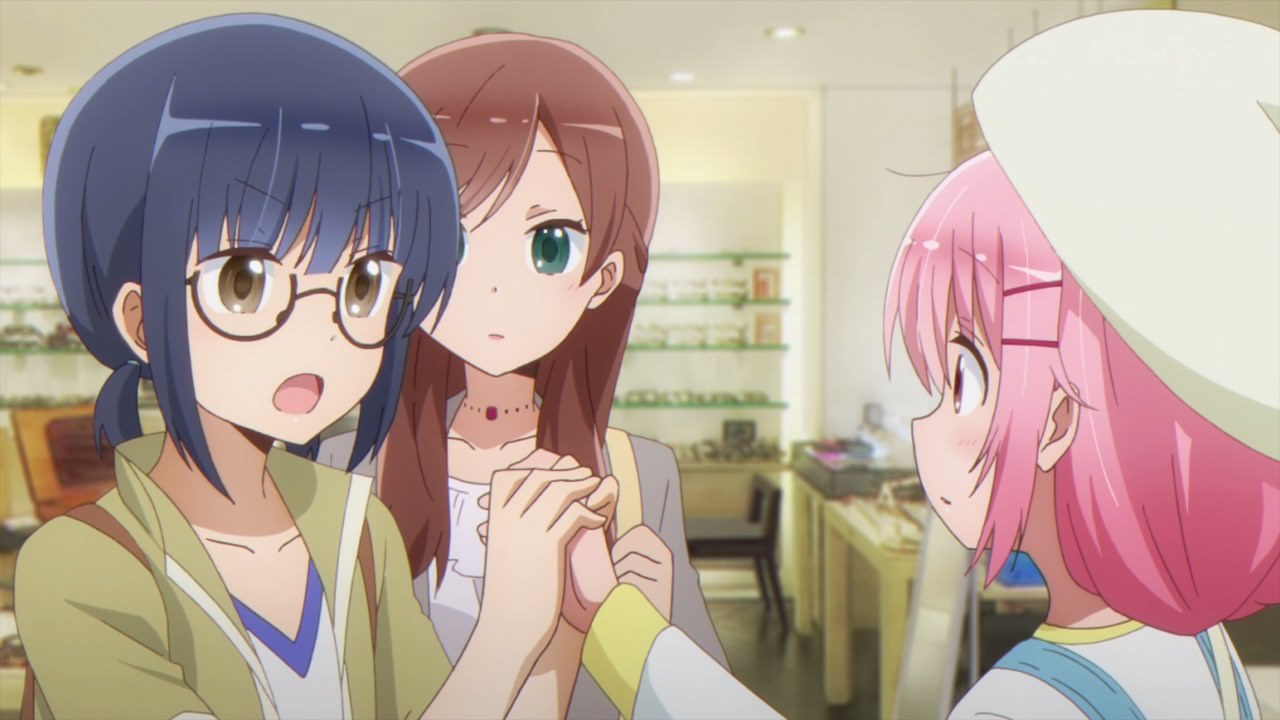 Speaking of Mayu Amisawa, she recommend Kaos-chan on getting eyeglasses because the benefit of having one is to see clearer and sharper images as if it is high definition.

Seriously, that’s not how eyeglasses works. Then again, it makes your vision look clearer than before! 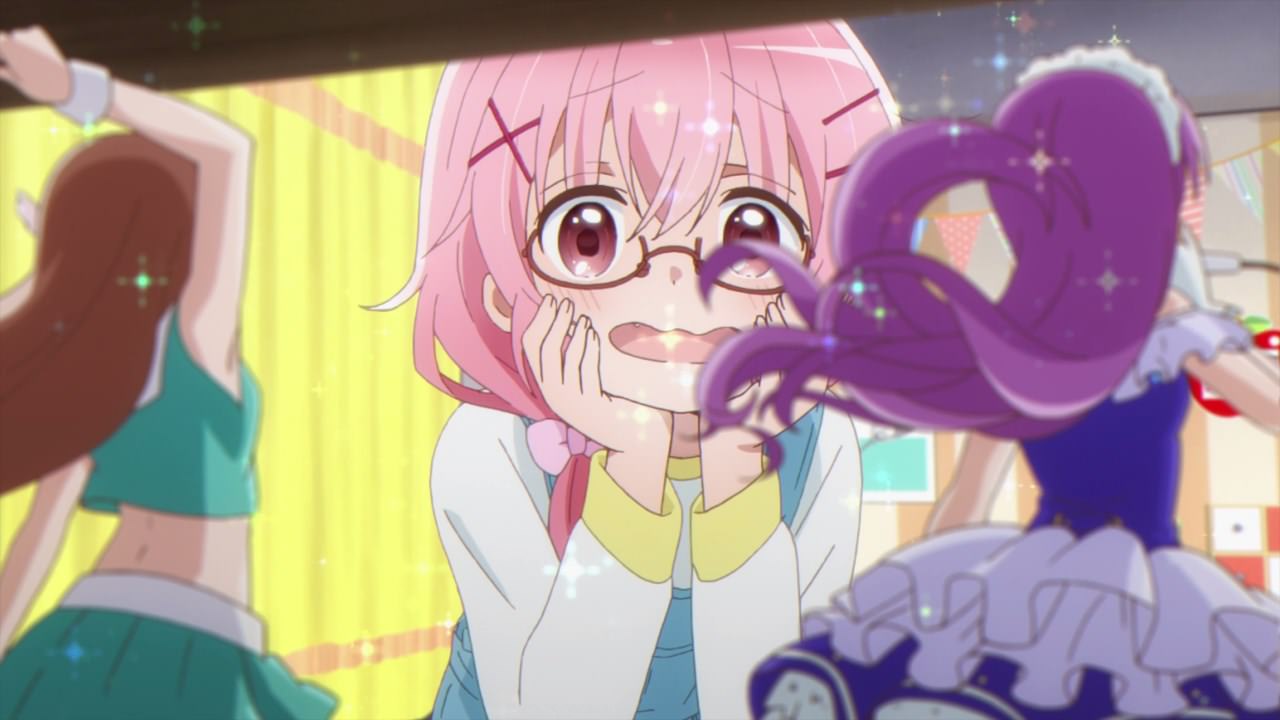 In the end, Kaoruko Moeta bought a pair of eyeglasses and as you can see, her vision is clearer now as if everything is in high definition. Then again, wearing eyeglasses means that Kaos-sensei saw how her drawing sucks.

With that said, I’ll see you next time and let’s hope that Kaos-sensei will have a serialized manga in the future… or not.