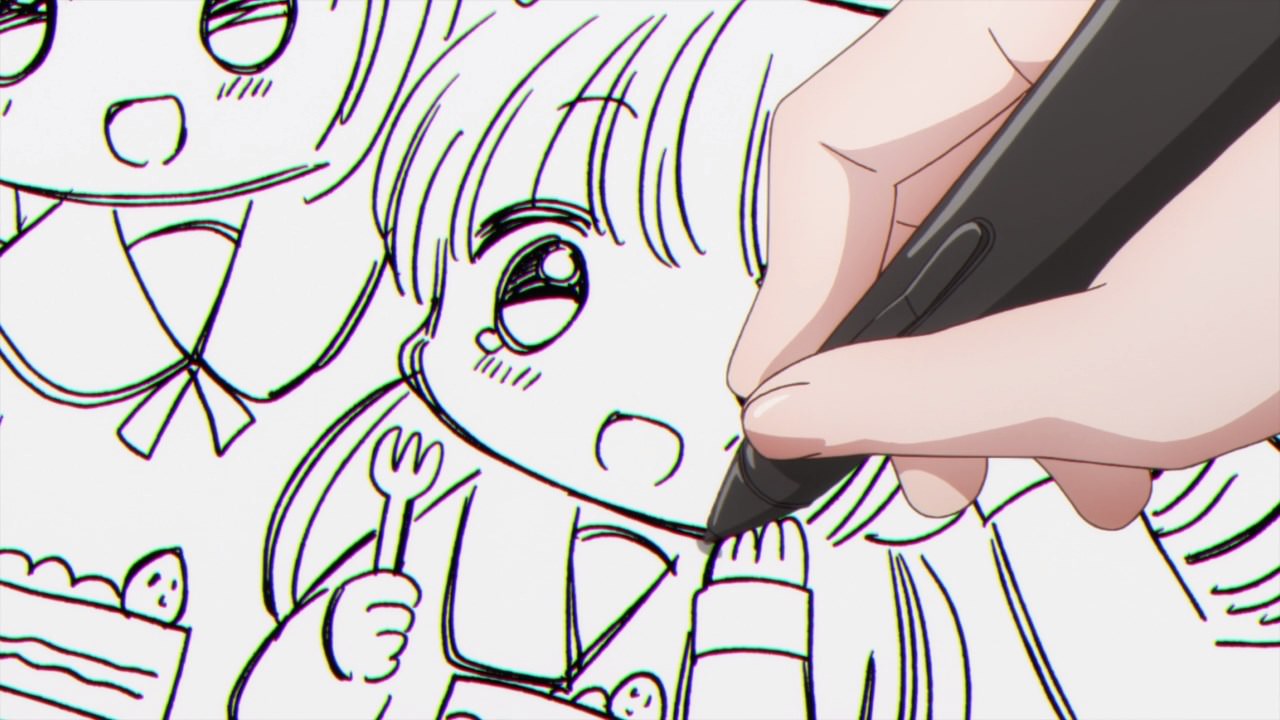 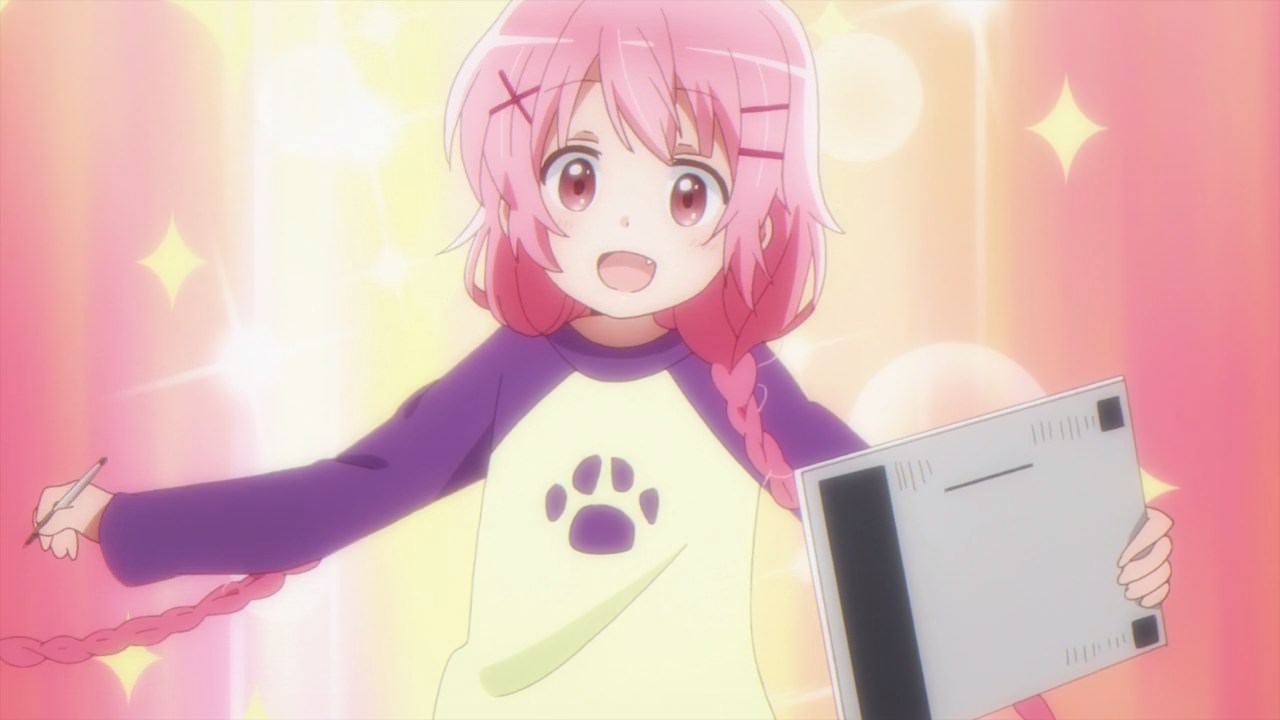 Here’s Kaoruko Moeta again as she’s just finished her storyboard for her new manga. Let’s hope that it gets serialized! 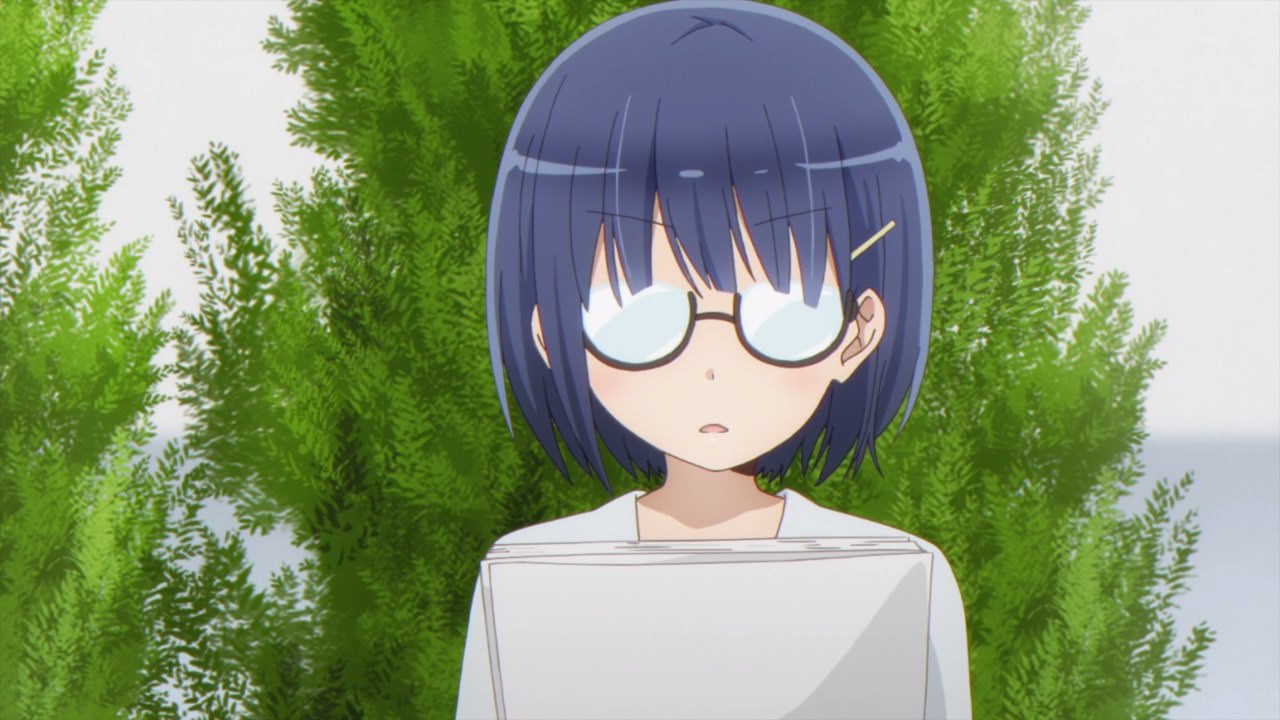 Unfortunately, Mayu Amisawa is very harsh as she rejected Kaos-sensei’s storyboard simply because it has the same face for all the characters. 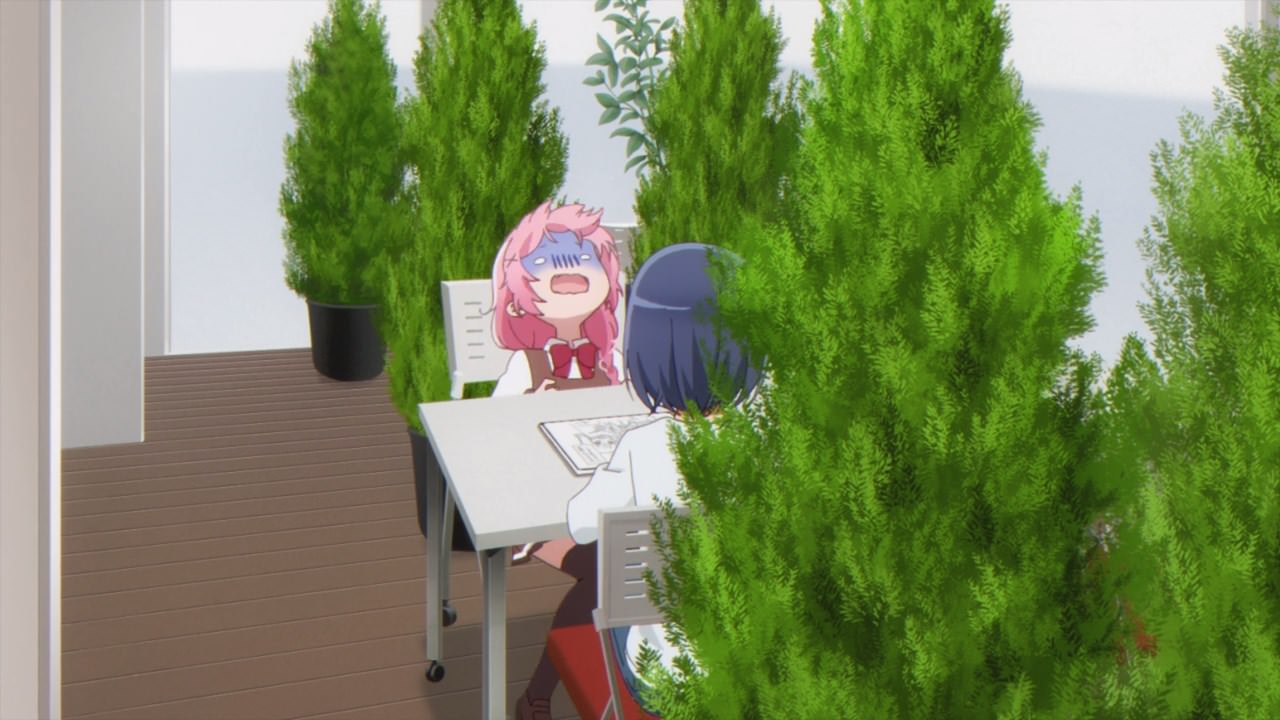 In any case, another rejection from her editor as Kaos-sensei goes down. In fact, that rejection is so bad that she might lose her faith as a mangaka. Say it ain’t so! 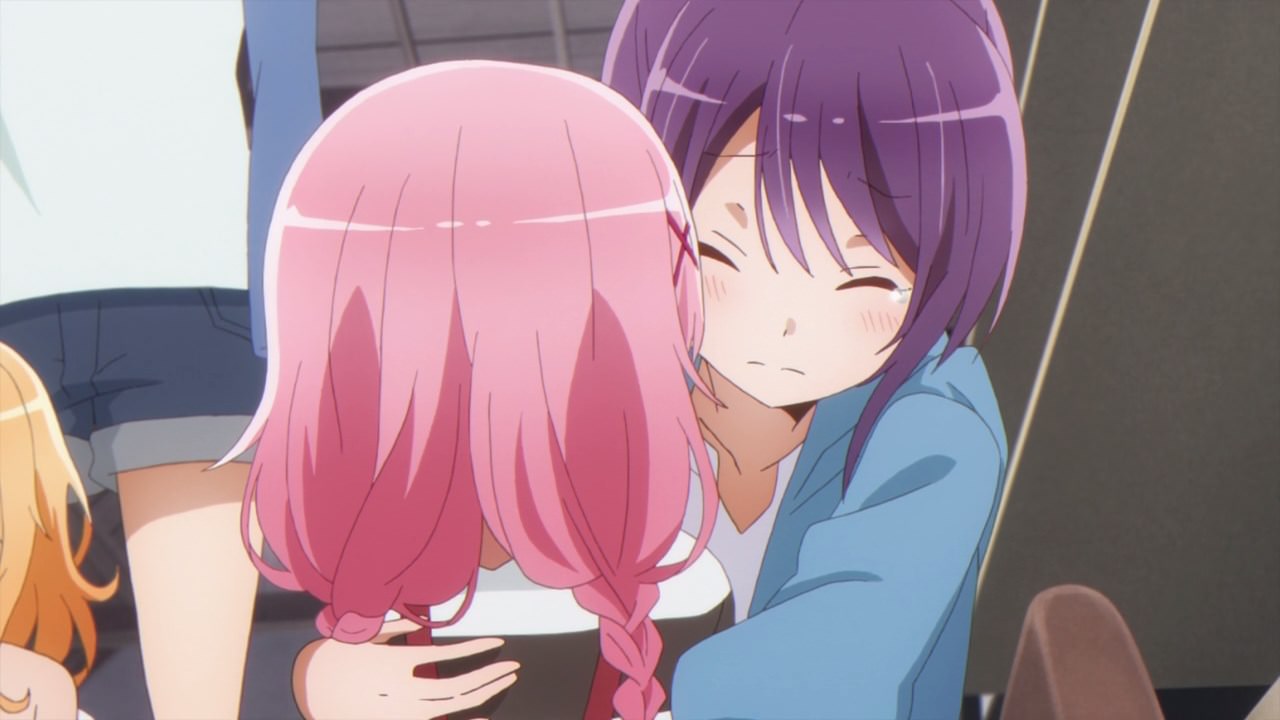 However, the likes of Ruki Irokawa and Koyume Koizuka are here to support Kaoruko Moeta through thick and thin until her manga is serialized.

Then again, Kaos-sensei felt that she’s being left behind as her friends got their works serialized in various weekly/monthly magazines. Seriously Kaos-sensei, don’t be so negative! 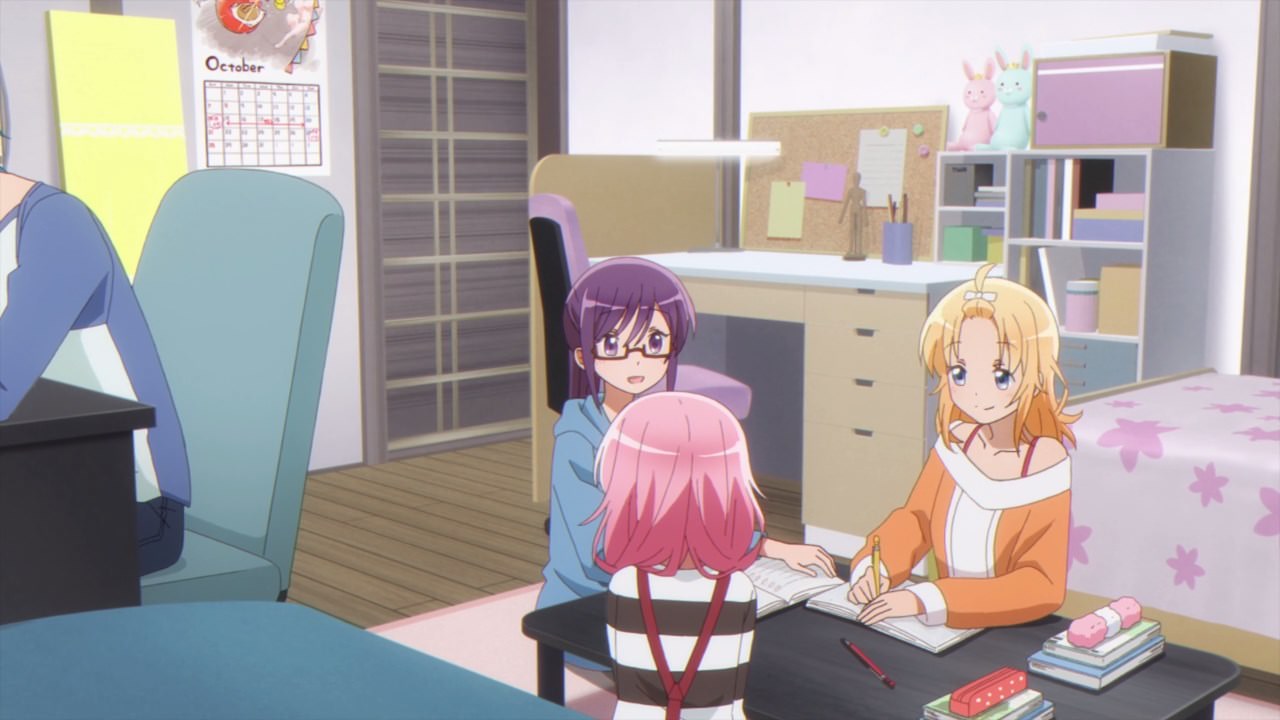 For now, it’s time for them to study for the upcoming exams. I mean, they need to balance their school life and their jobs or they’ll get in trouble (except for Kaoruko Moeta). 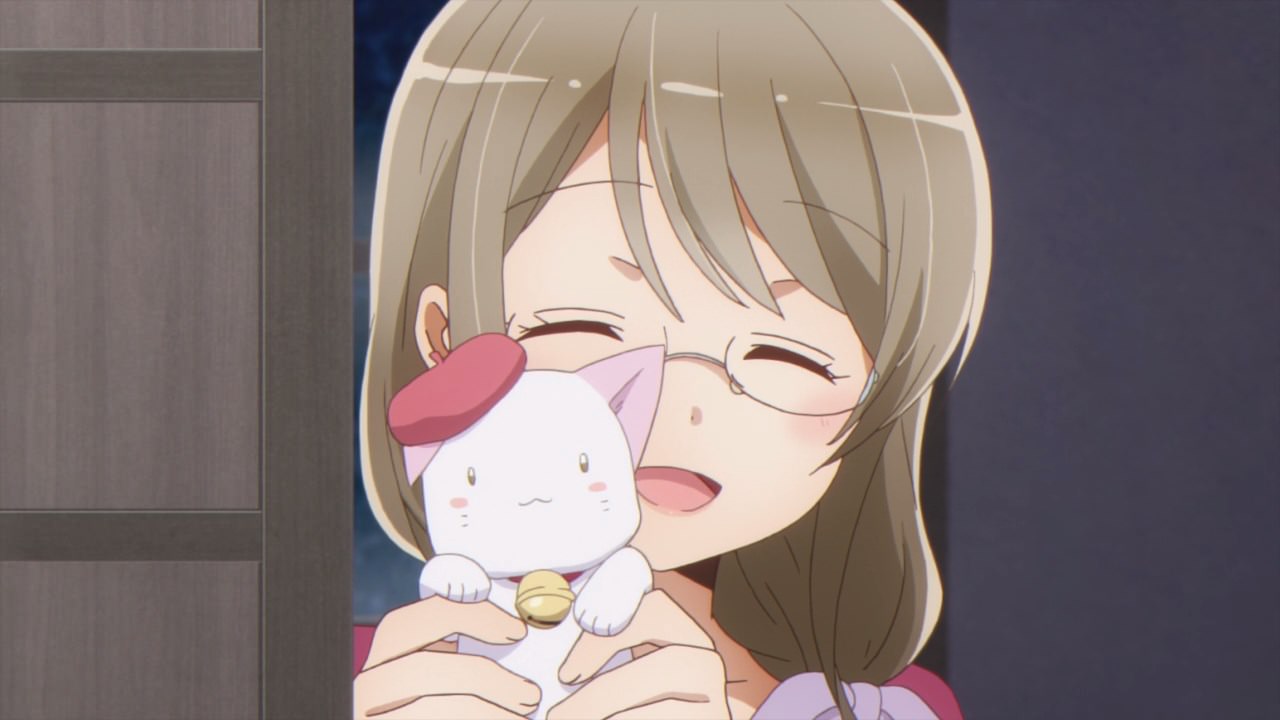 Oh and if they’re in trouble, there’s Ririka Hanazono as she brought Nyaos-sensei to calm them down if they stumbled something.

After all, pulling an all-nighter is hard if you’re trying to cram all of the lessons for the upcoming tests. 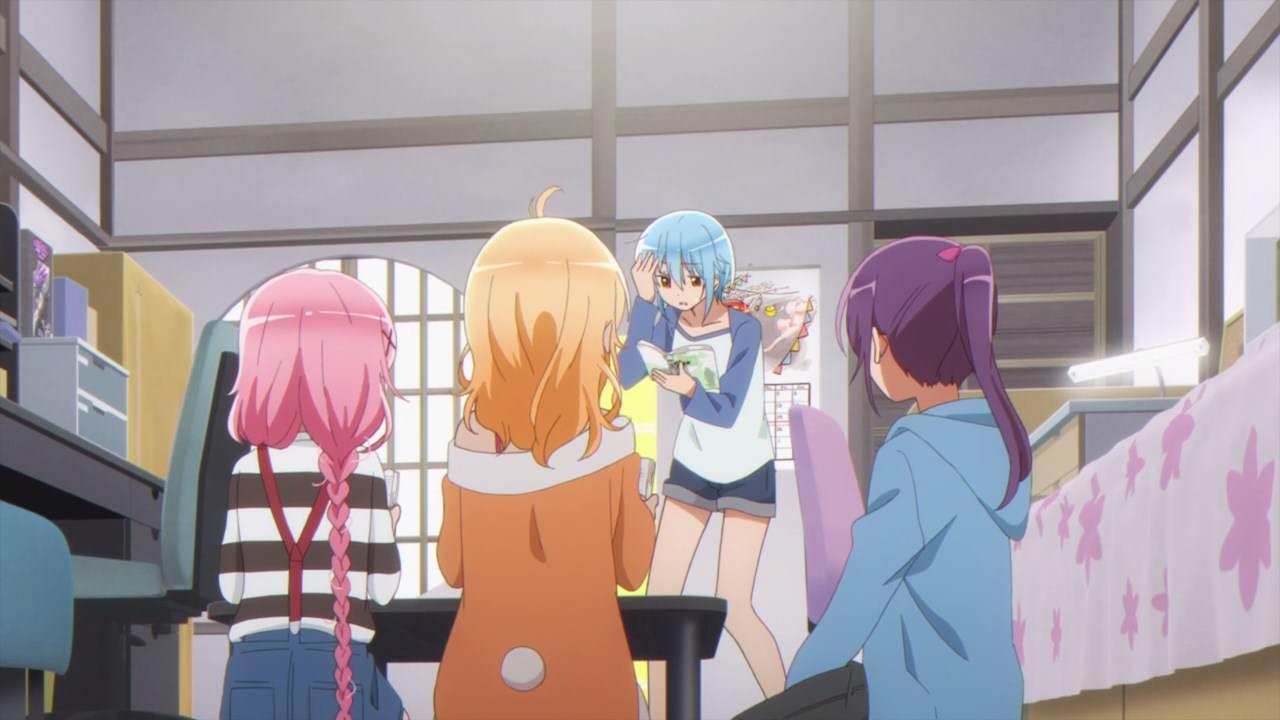 Unfortunately, not everyone are keen on studying for the upcoming exams as we have Tsubasa Katsuki.

Even though she’s done with her manuscript, her mind is still drawn to her manga as Tsu-chan still acts like a dark hero. Seriously Tsu-chan, get serious on your studies for once! 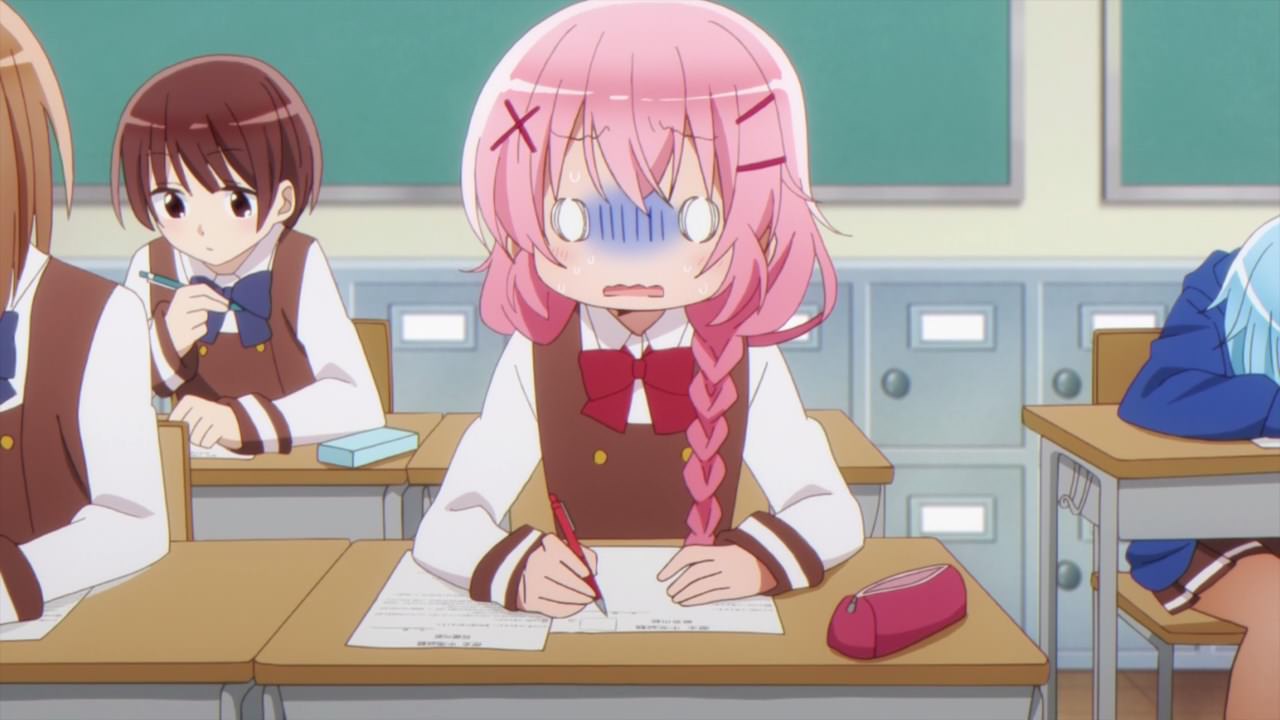 But now, it’s time for the test as most of them barely pass the exams, or did poorly in the case of Koyume Koizuka.

Well, seems that Koyume won’t be doing her manga as she’ll be taking supplementary lessons after school. 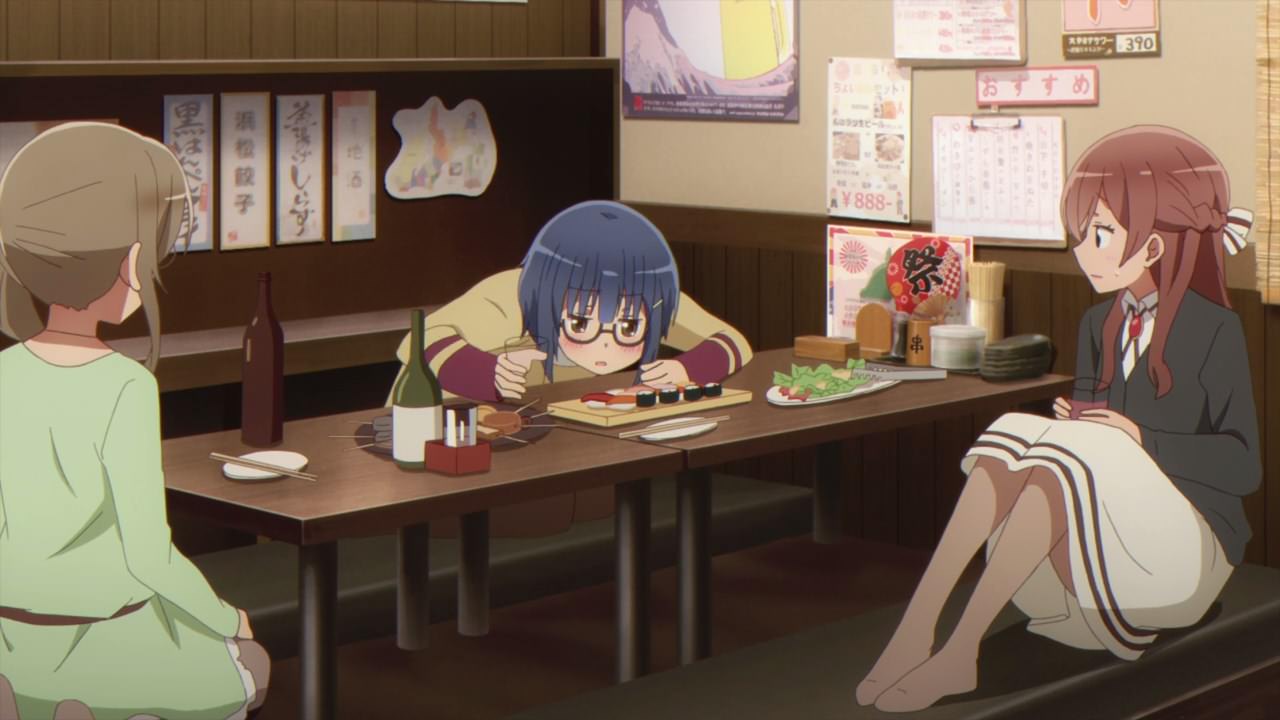 Now then, let’s focus on Ririka Hanazono, Mayu Amisawa, and Miharu Nijino as it turns out that they’re actually friends. Then again, Mayu is sobered up that she blames herself for rejecting Kaos-sensei’s manuscripts and storyboards.

Speaking of these three ladies, they had a history together that they joined a manga club at some point in their lives. 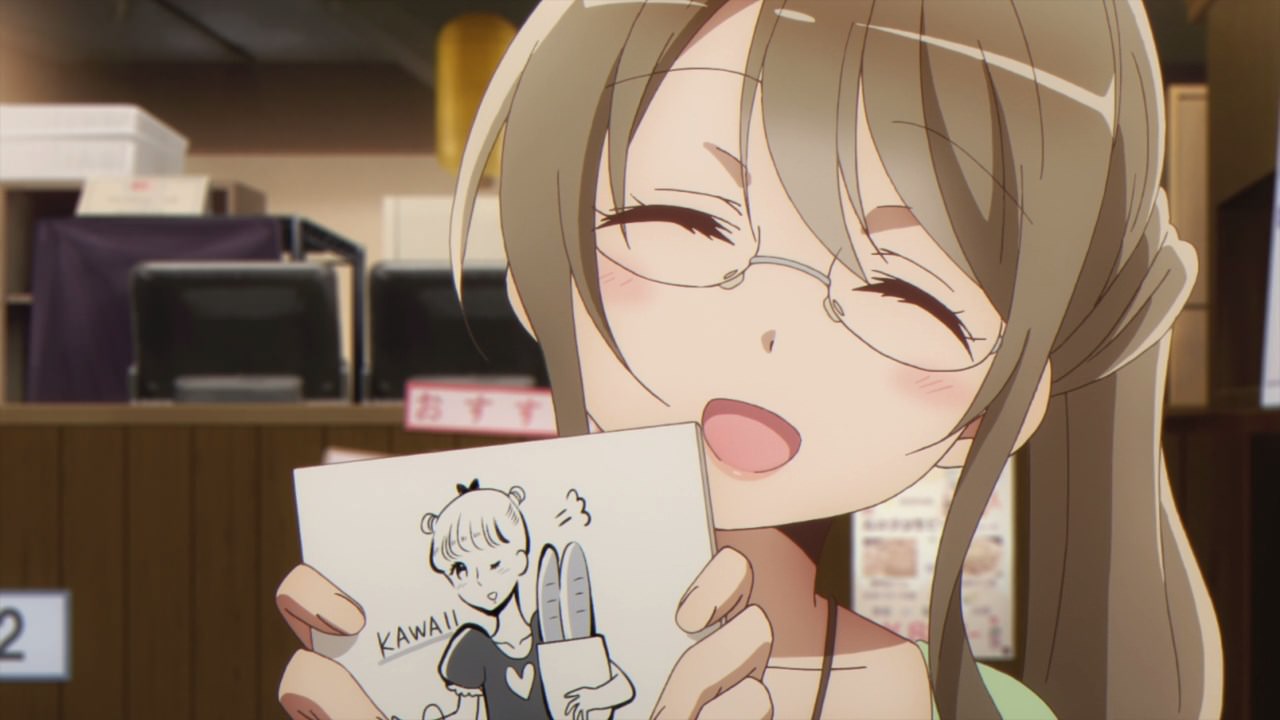 In fact, Ririka-san brought a manga that they made together during their manga club years. Yeah, it looks amateurish but it’s very significant for them. 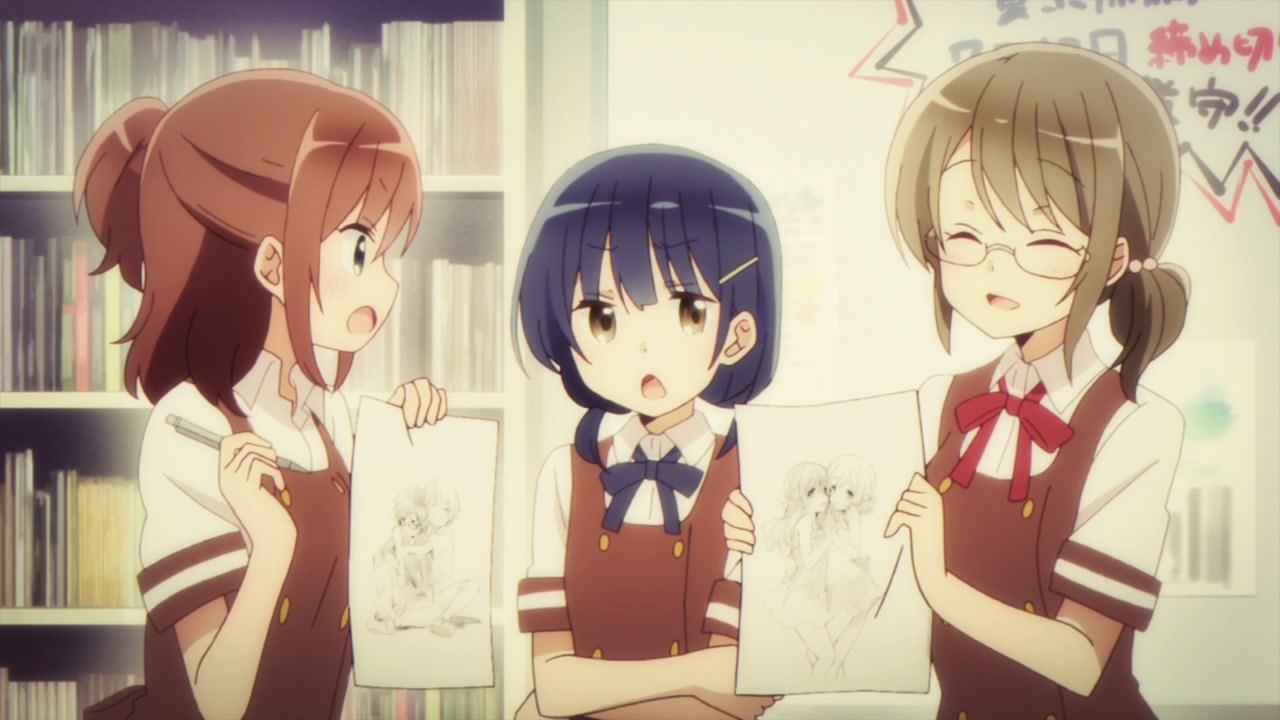 In any case, I must say that it’s fascinating to see these ladies drawing up manga at some point.

While Ririka Hanazono is known for the yuri genre, I wonder what genre that both Mayu Amisawa and Miharu Nijino took during their stay at the manga club? 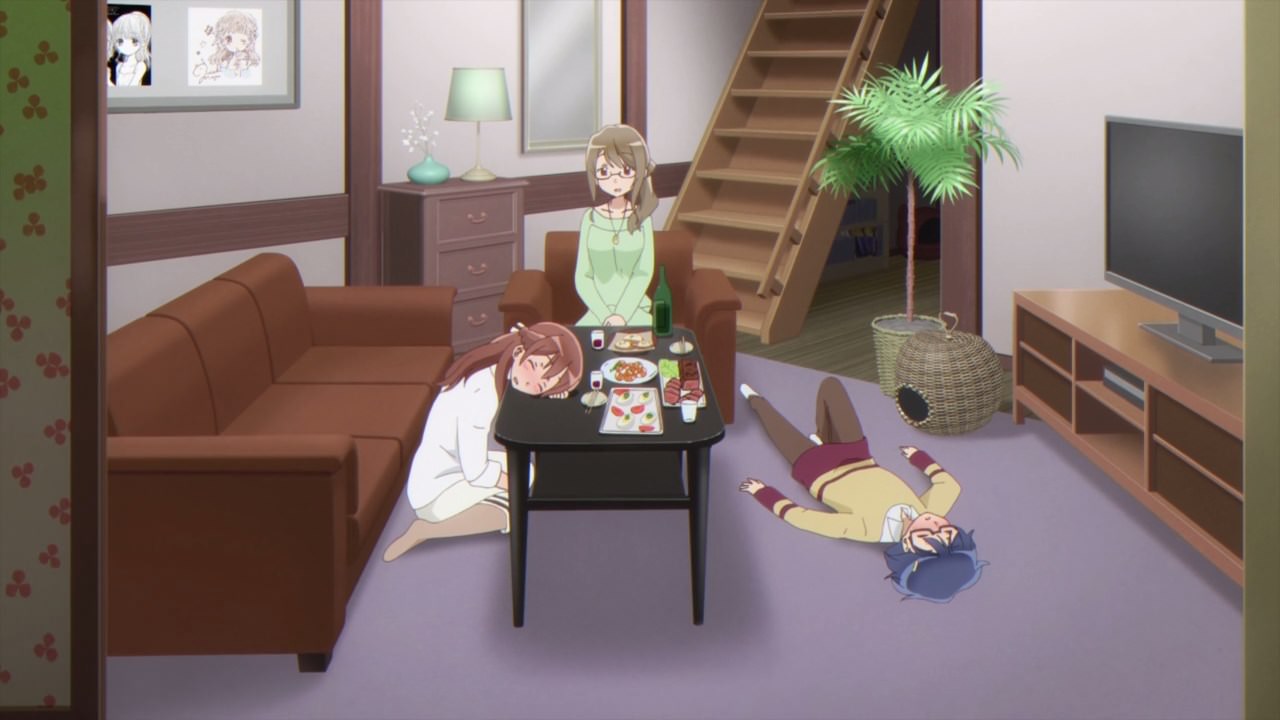 Now then, they continued their chat at the dormitory and man, both Amisawa and Nijino-sensei are tipsy that they couldn’t stand up… except for Hanazono.

By the way, it seems that the dormitory will be demolished in the future, which is bad for a certain Kaoruko Moeta given that she lived far away from Tokyo. 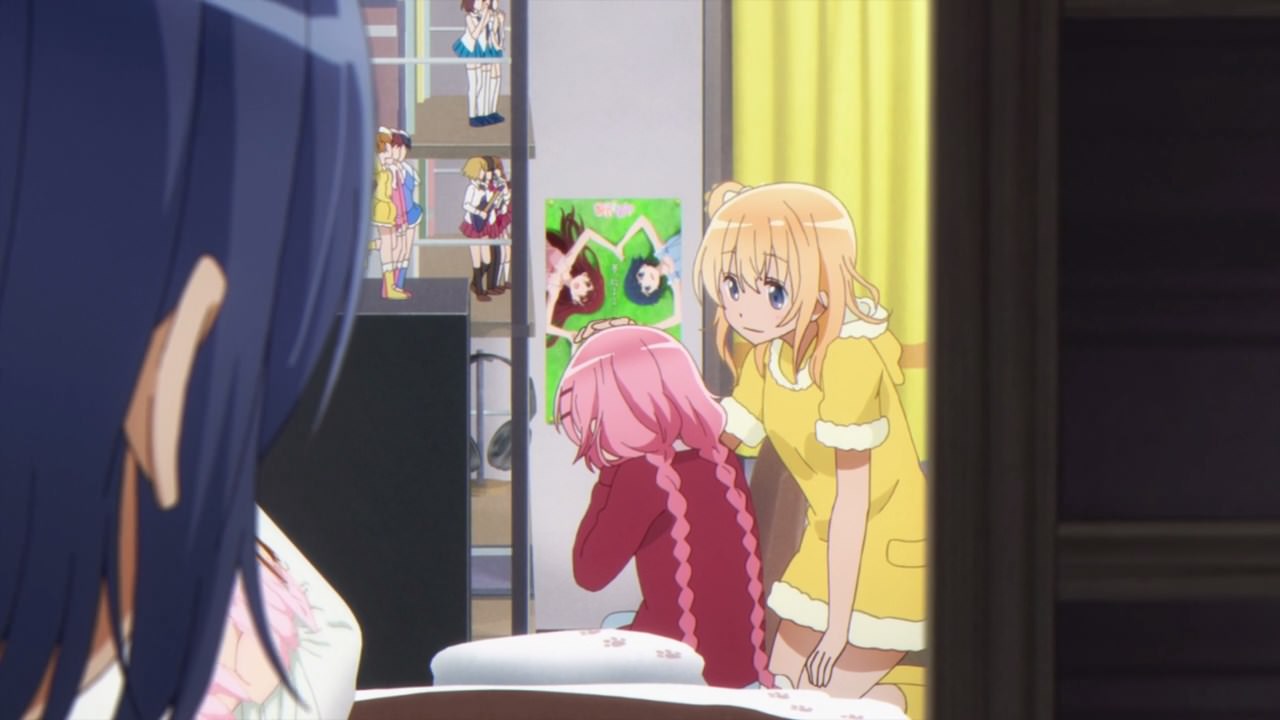 Speaking of Kaoruko Moeta, it seems that she’s still depressed that no matter how much she try to create interesting stories, her manga gets rejected every single time by her editor Mayu Amisawa. 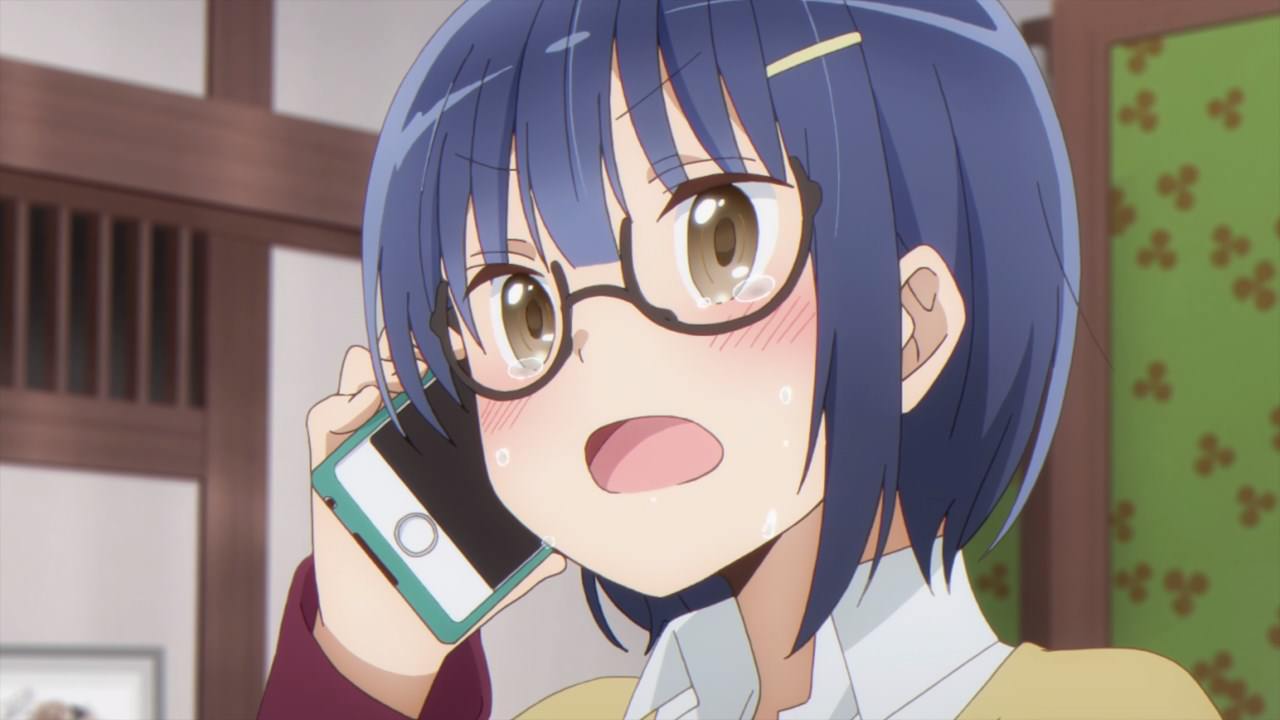 However, Mayu Amisawa told Kaos-sensei on the phone to not give up and make interesting stories no matter what. Well, that’s a good way to motivate poor Kaoruko Moeta! Still, it’ll take a long time for her to get her work serialized.

In any case, that’s about it for this episode of Comic Girls. While it’s interesting to see Amisawa, Hanazono, and Nijino-sensei having a history together as members of a manga club, I wonder when will this series throw a bone to poor Kaos-sensei after all that rejections? Anyways, I’ll see you next time!