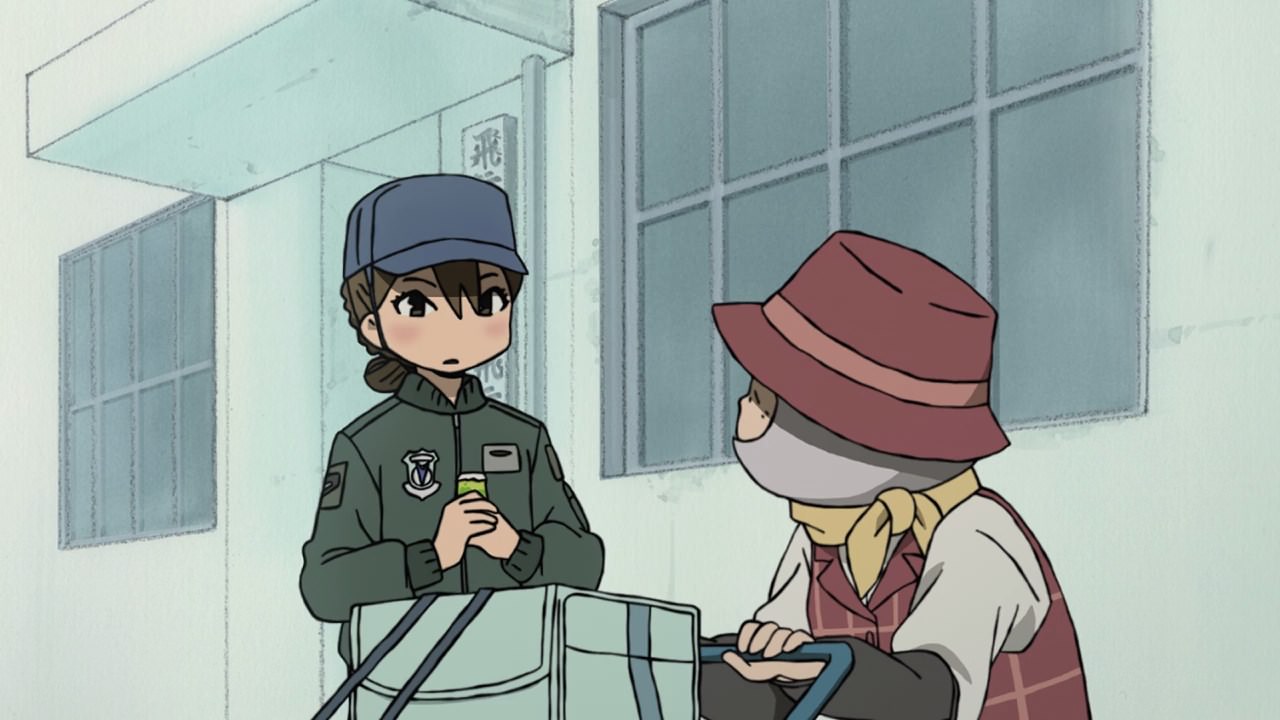 Back at the Gifu Air Base, Nao Kaizaki is getting a drink from this mysterious old lady named Sada Hinomoto.

Oh, and it’s a limited-edition kiwi flavor which is nice to have one. 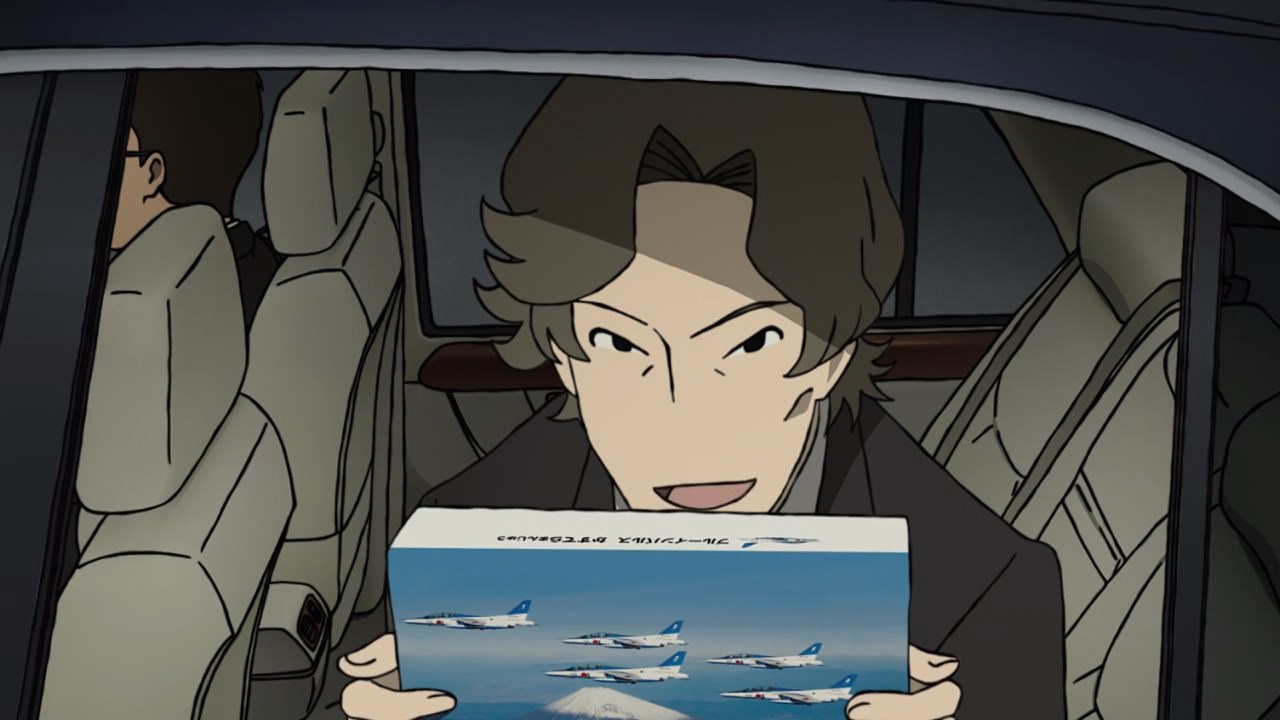 Hmm, for some reason, this vice minister sure has a penchant for sweets and other delicacies. 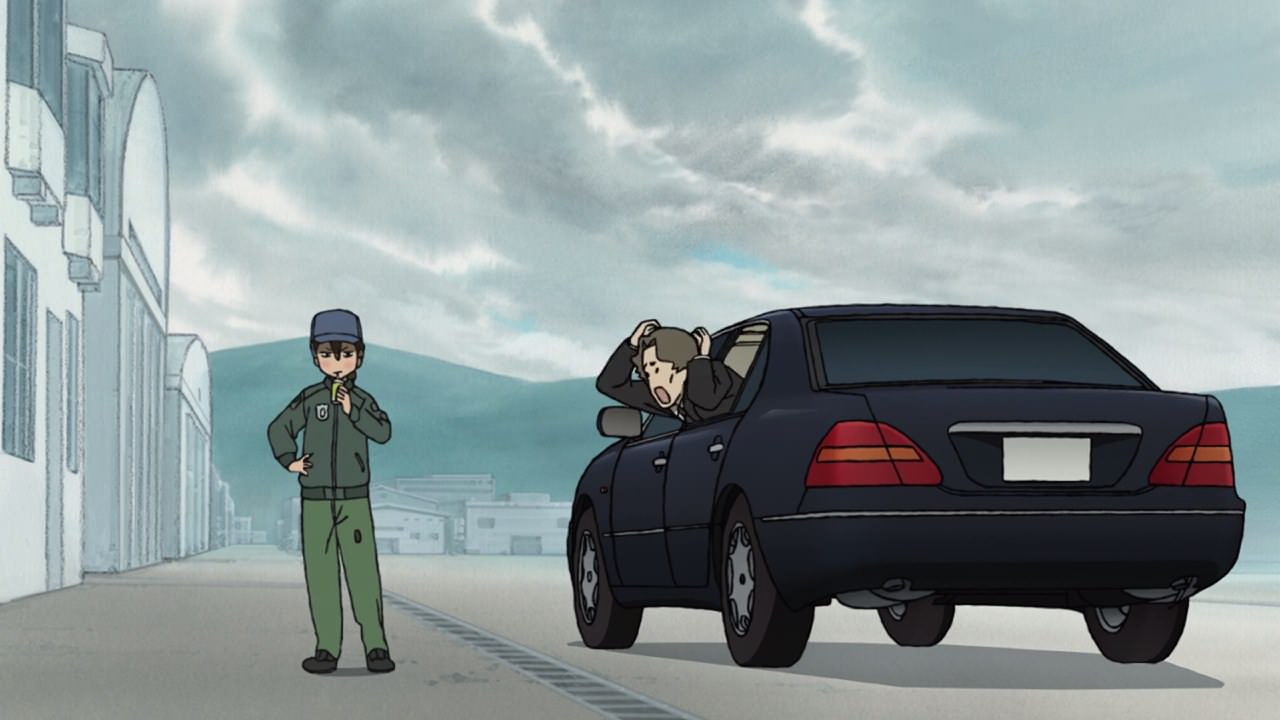 But as for Kaizaki, she’s not gonna trade her drink because Nao doesn’t like custard. 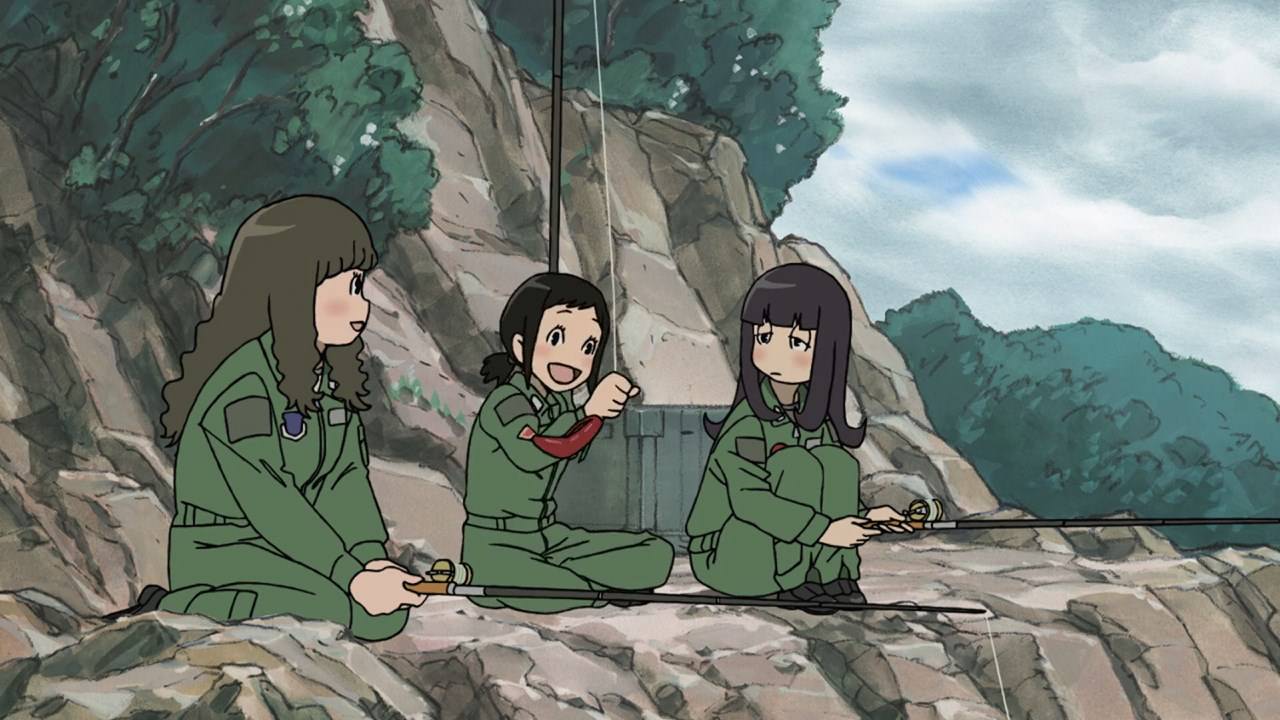 Now let’s return to the island where Hisone Amakasu and the rest are spending their time getting food to eat until the last day.

I mean, it’s not like they want to get out of this island quickly. The only person who does that is Eru Hoshino, which she’ll abandon her OTF “F-2” behind. 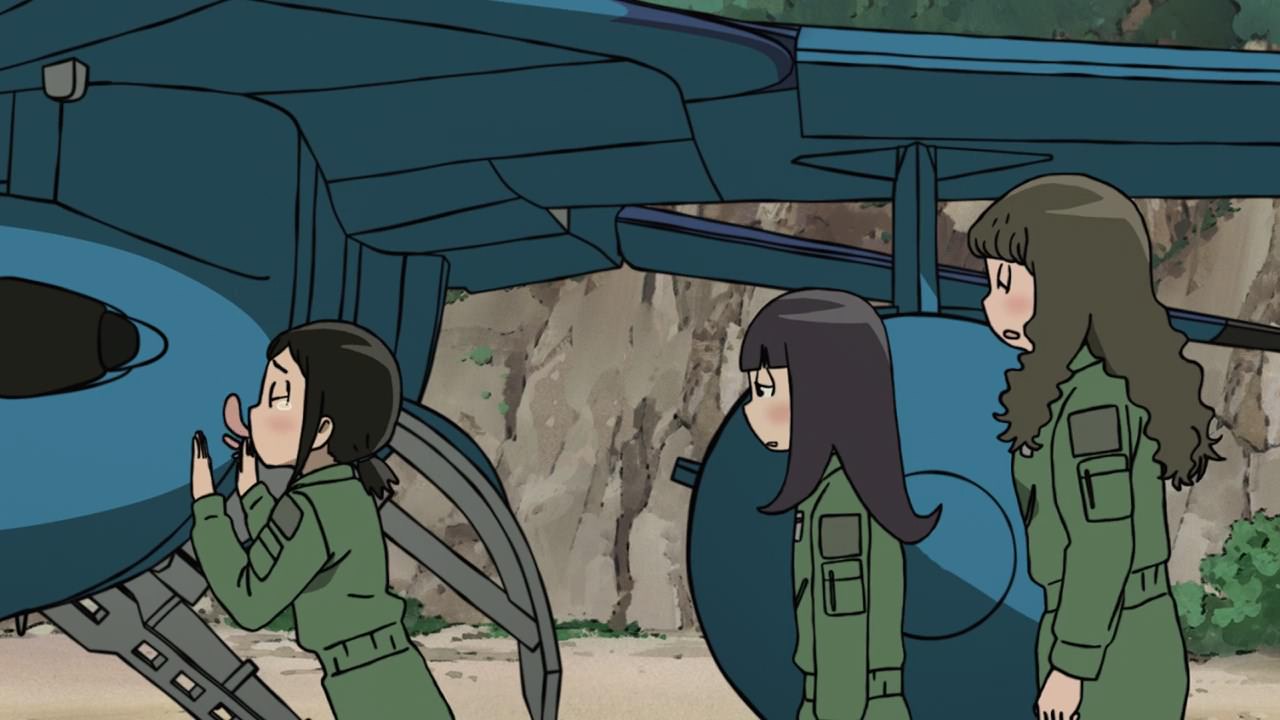 Speaking of Eru’s F-2, Hisone approached the OTF and licked its metal skin which is soaked in seawater.

Well, at least these girls are worried about F-2’s well-being, which they now call it as Ken-san. 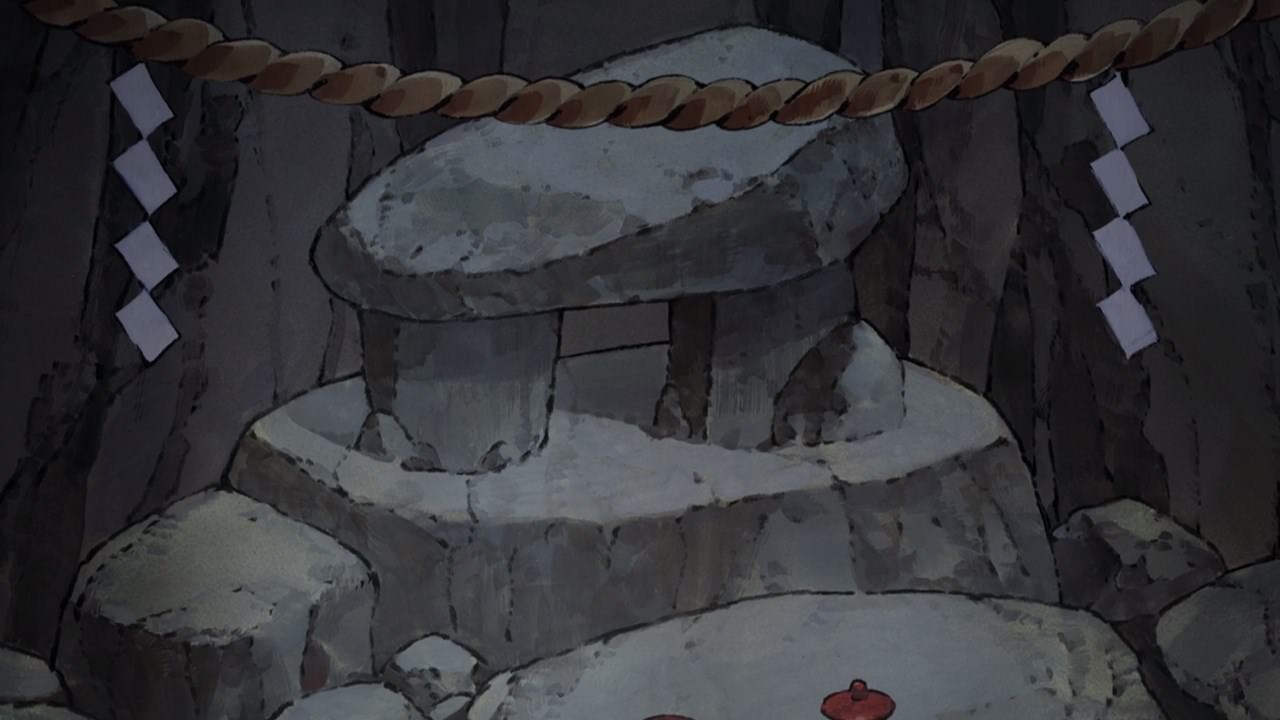 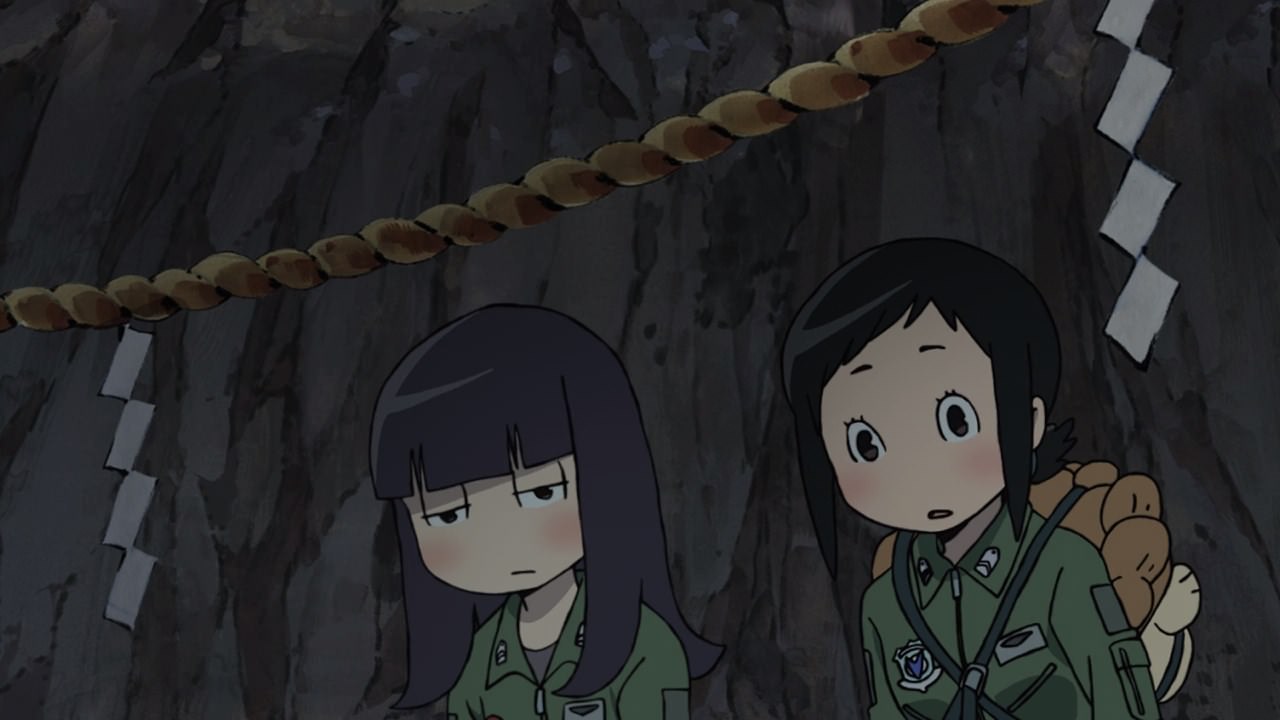 Meanwhile, Hisone Amakasu and Ririko Kinutsugai went to the shrine/pond where Kinutsugai thinks that this place is linked to the OTFs. It’s no wonder why those dragons don’t want to go home yet! 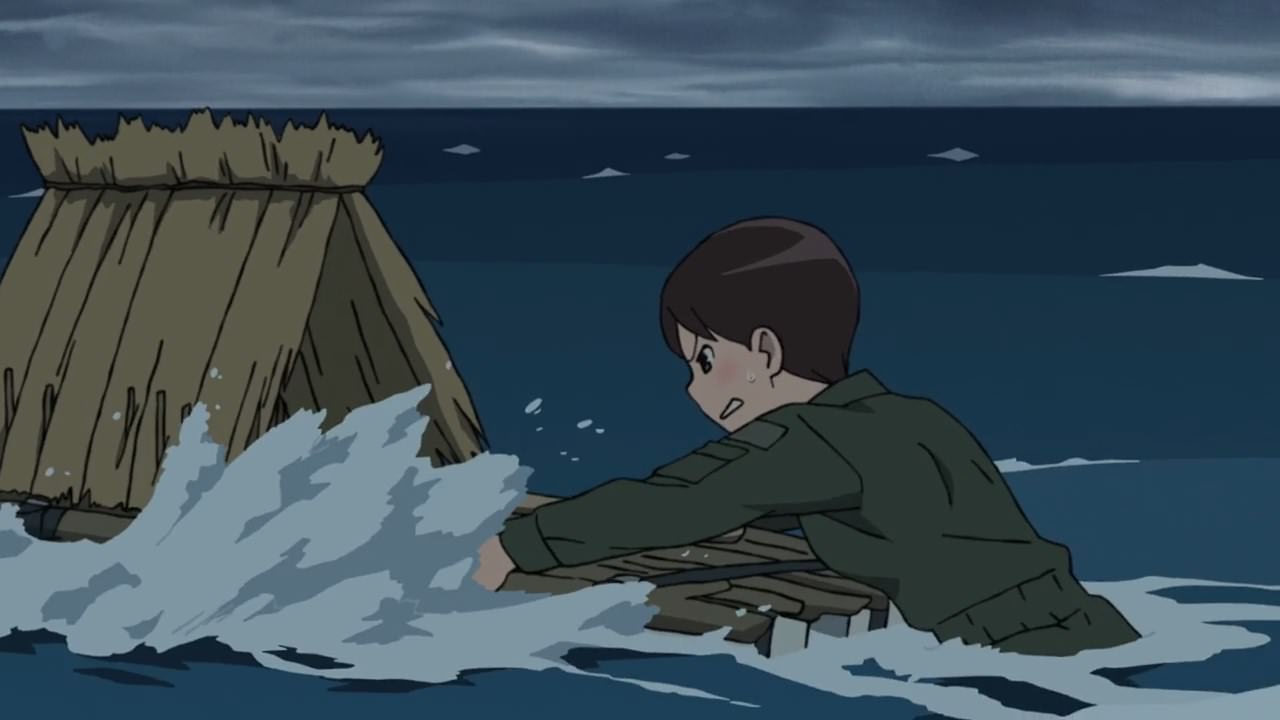 Well, the only one who wants to return to Gifu Air Base (and abandoning her OTF) is Eru Hoshino as she just finished her raft. 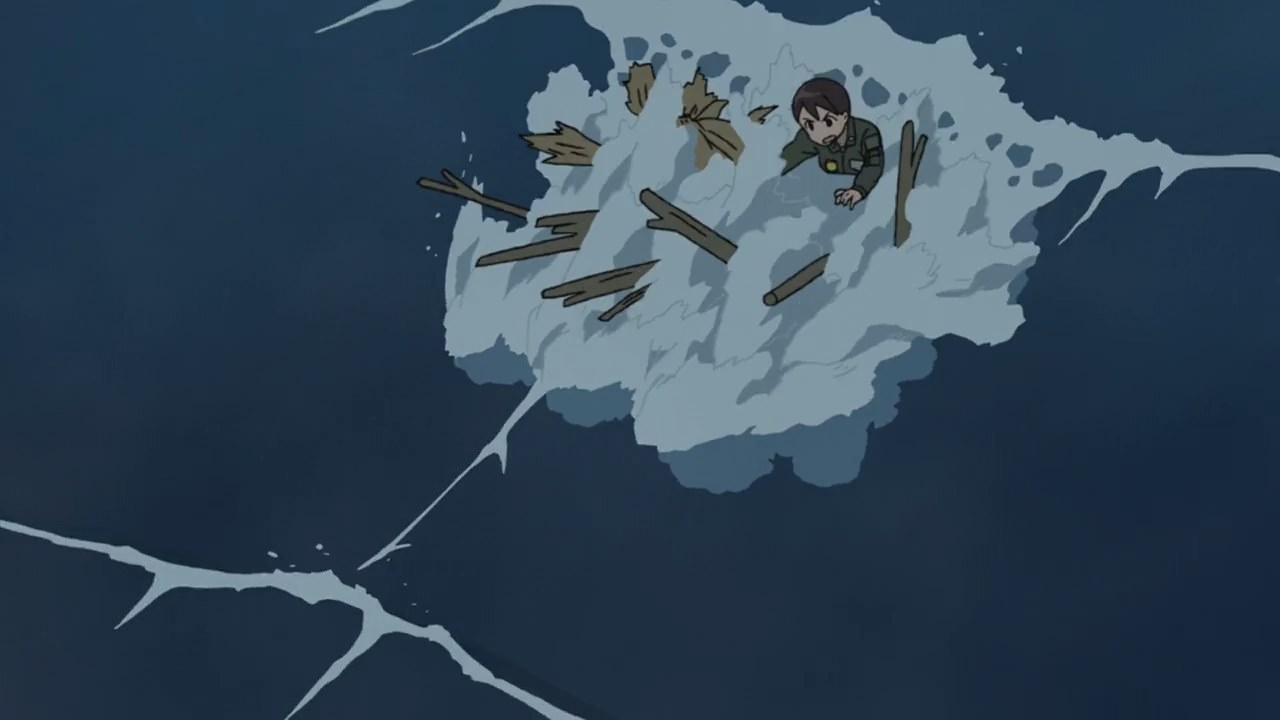 Unfortunately, the Senior Master Sergeant got washed away as sailing through rough seas is a bad idea.

Seriously Eru Hoshino, why don’t you just wait for the JASDF and save you… and then kick you out from the OTF program. 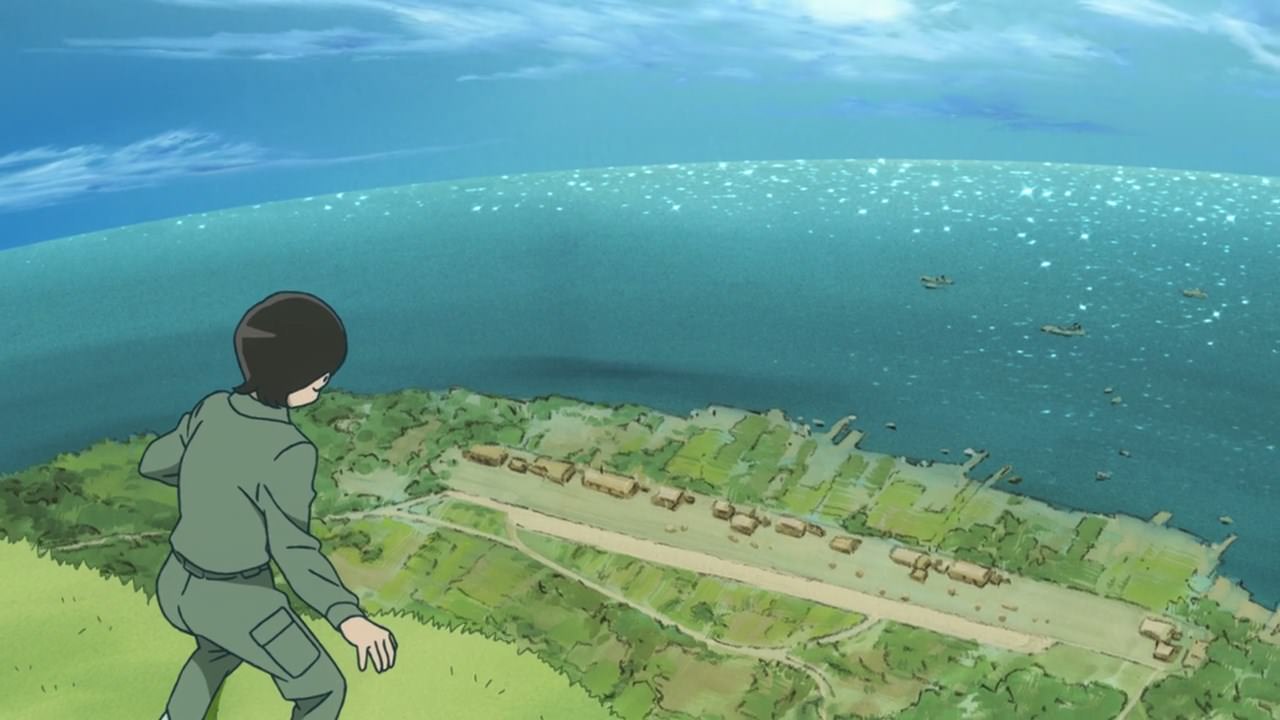 Now then, let’s go deeper as we explore Eru Hoshino’s dream sequence where she’s stumbled on a different time-line, mainly the early years of the Showa period. 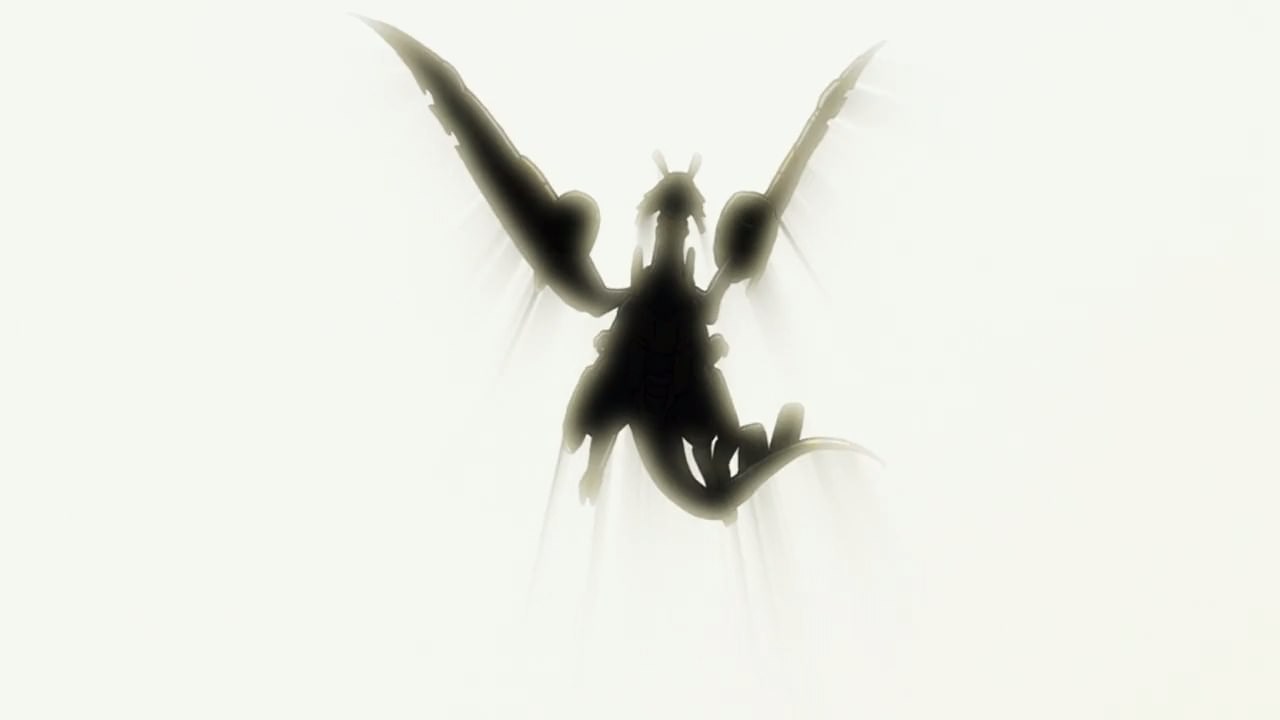 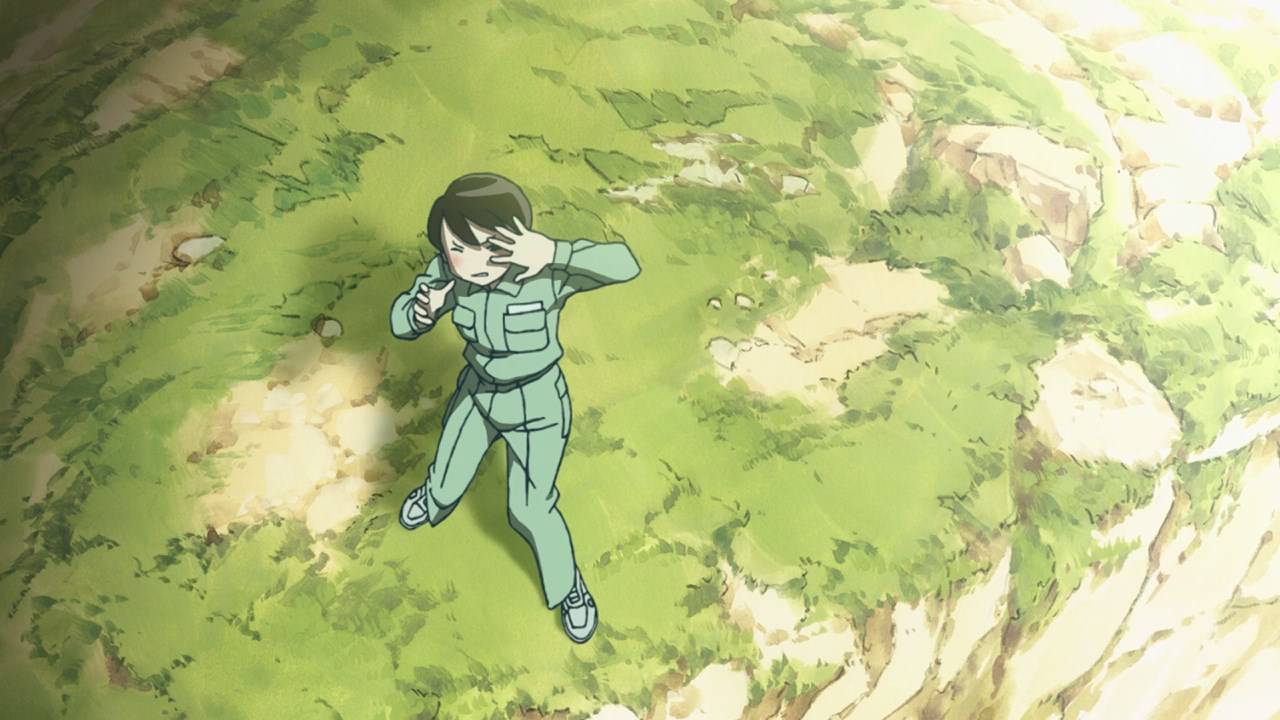 There, the Senior Master Sergeant saw an Organic Transporting Flyer flying with the sun behind its back. 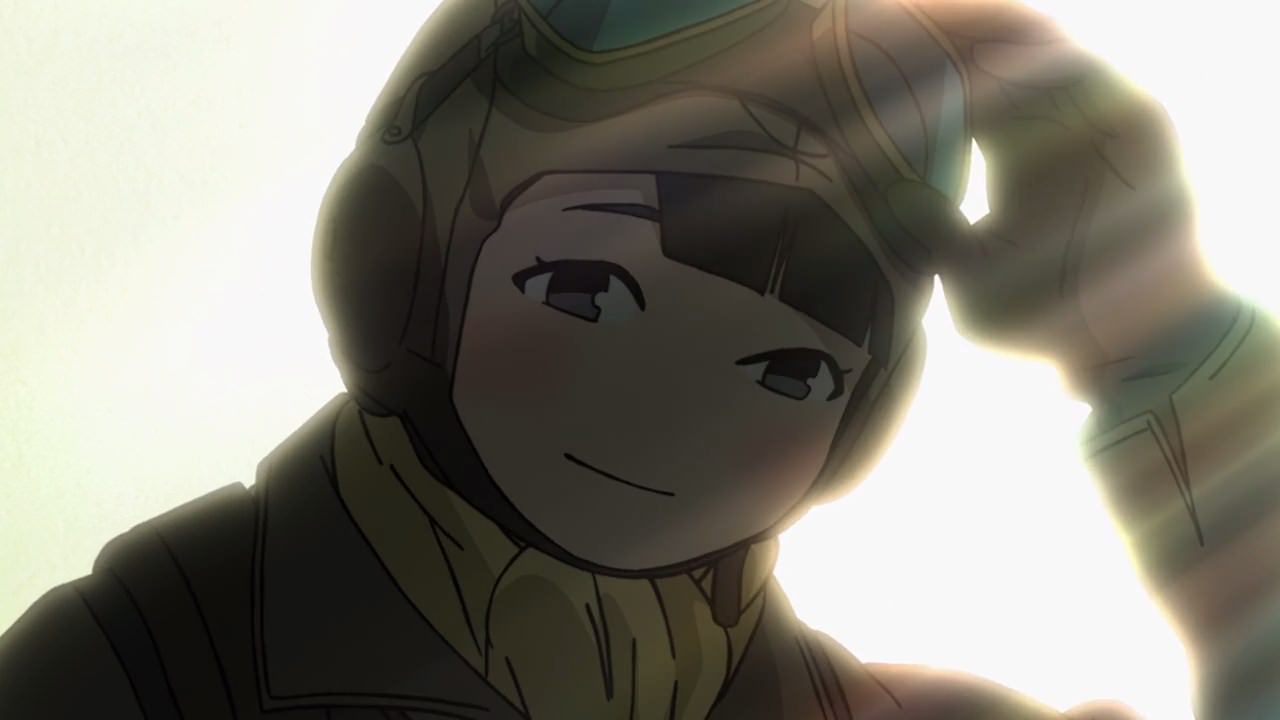 Oh, and she also saw a D-Pilot too. Then again, I wonder if this D-Pilot is actually a young Sada Hinomoto? 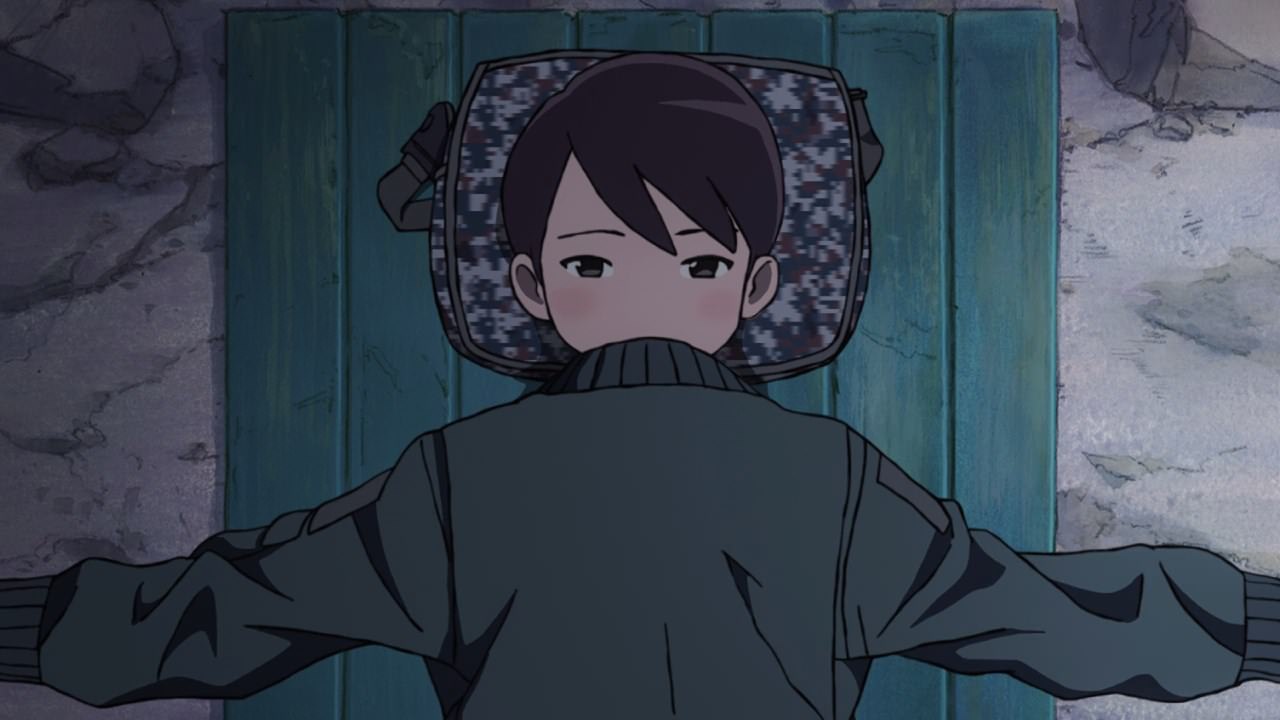 Anyways, Eru Hoshino woke up after being rescued by Hisone Amakasu and her fellow D-Pilots. 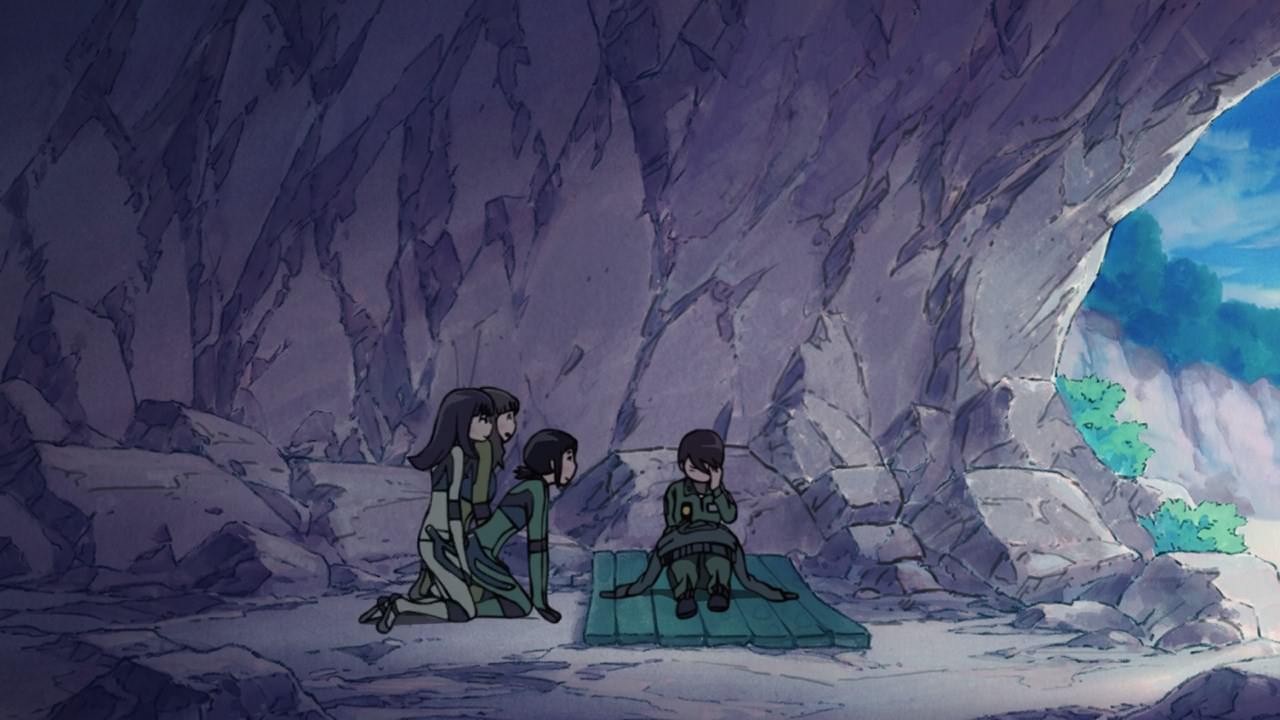 Of course, the reason why they rescue Hoshino is not just because they found her at a shore somewhere, but it was her OTF F-2 (or Ken-san) who alarmed them that the Senior Master Sergeant is in trouble. 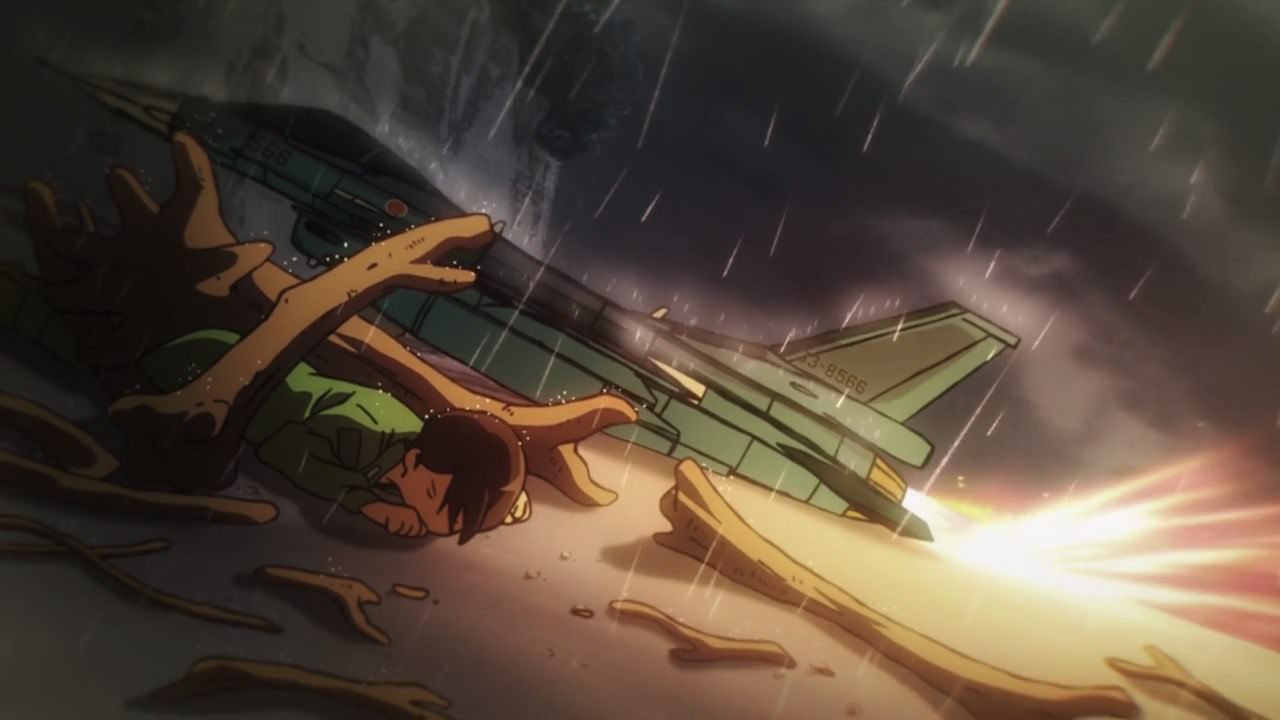 As you can see, F-2 (or Ken-san) used its thrusters to get their attention. I must say that Eru’s OTF is one hell of a dragon even though she’s mistreating it much. 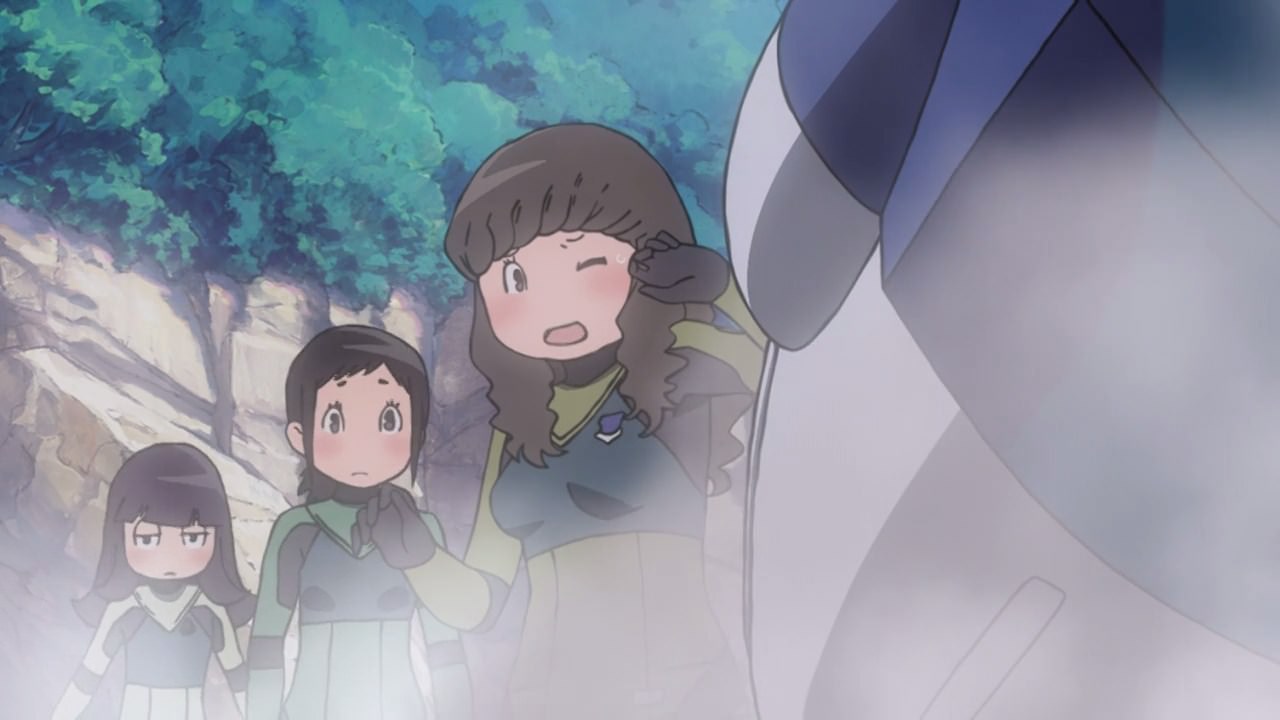 Unfortunately, seems that Ken-san used its thrusters a bit much that the OTF started overheating.

Hisone and the rest tried to convince Ken-san to transform into its dragon form, but Eru’s OTF couldn’t do it. 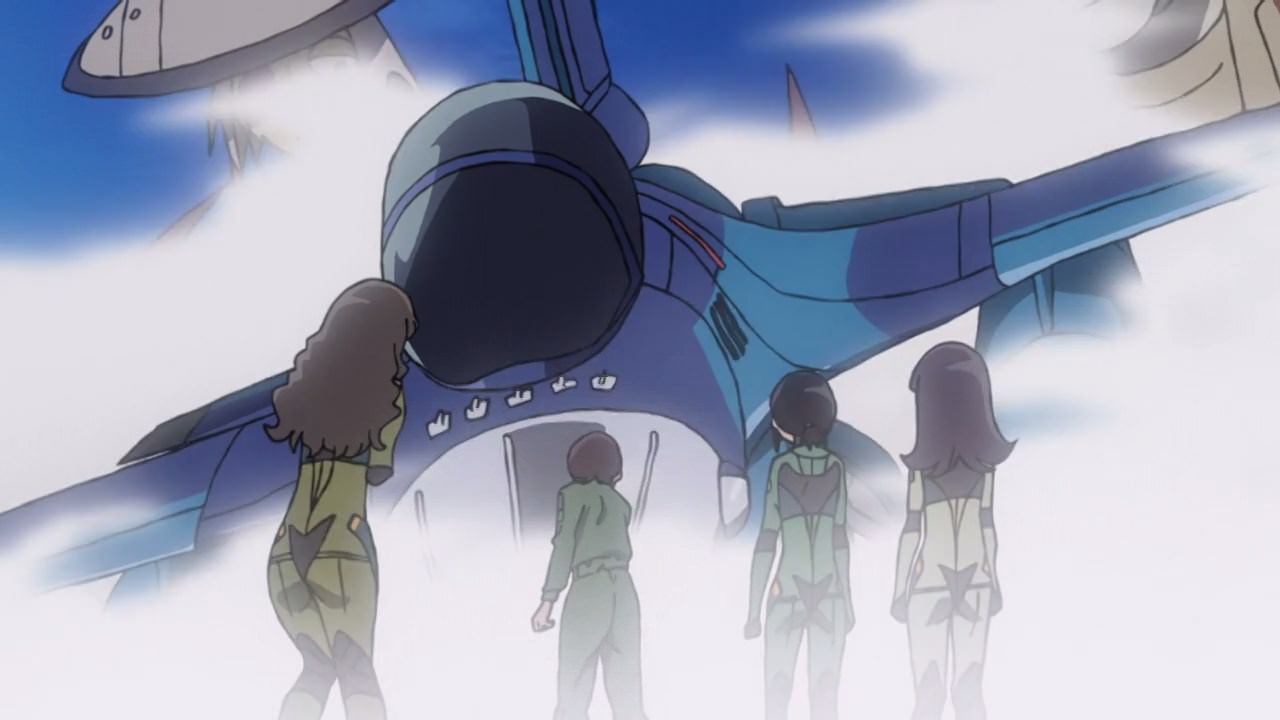 That’s until Eru Hoshino got up on her bed and approached her OTF. By the way, her OTF is not named as either F-2 or even Ken-san for that matter. 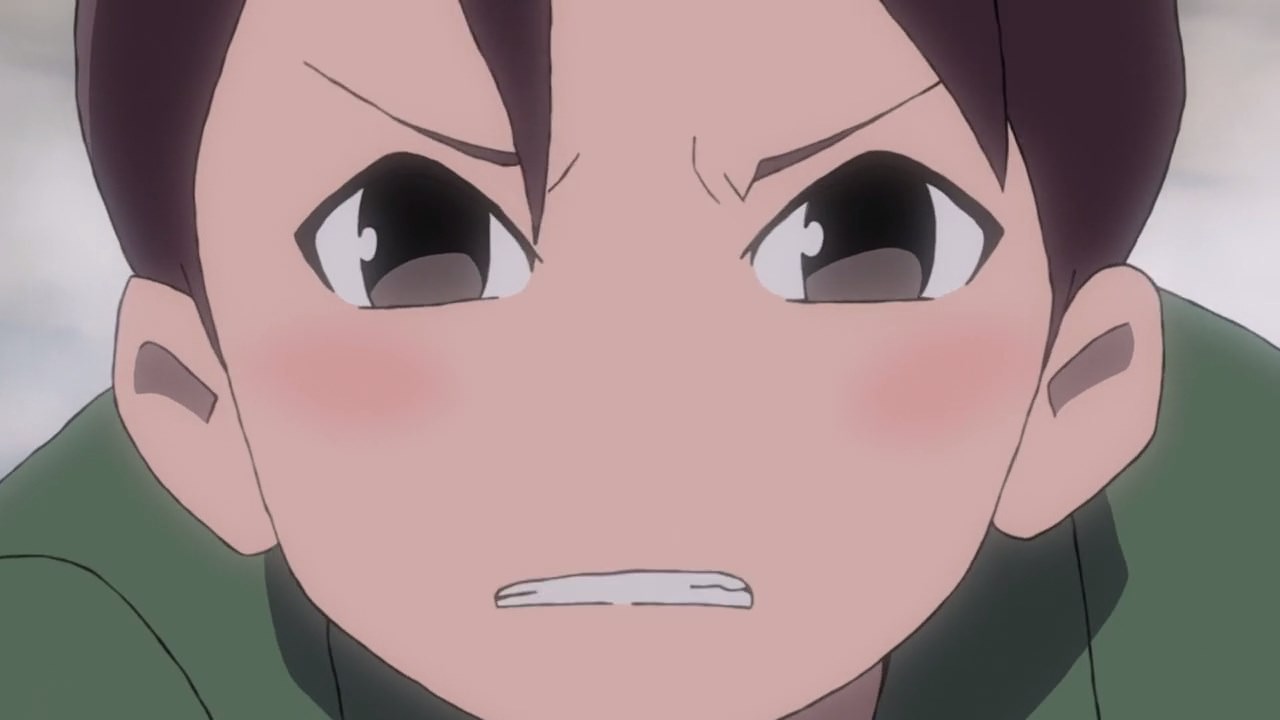 In fact, Senior Master Sergeant Hoshino realized that the F-2 she’s piloting is not a real thing, but a dragon. Oh, and its name is none other than Norma. 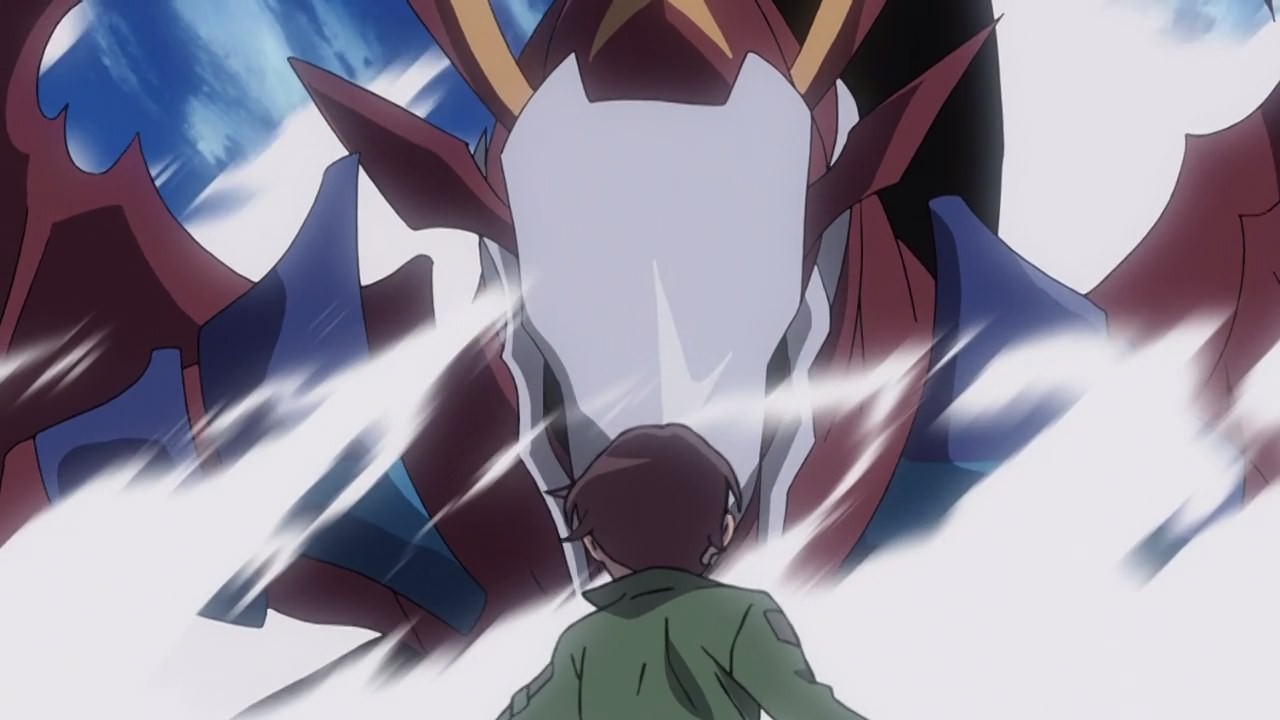 And after saying that name, F-2 or Norma transformed back into its dragon form. Yeah, it’s a bit stuffy and hot on maintaining its fighter form for so long! 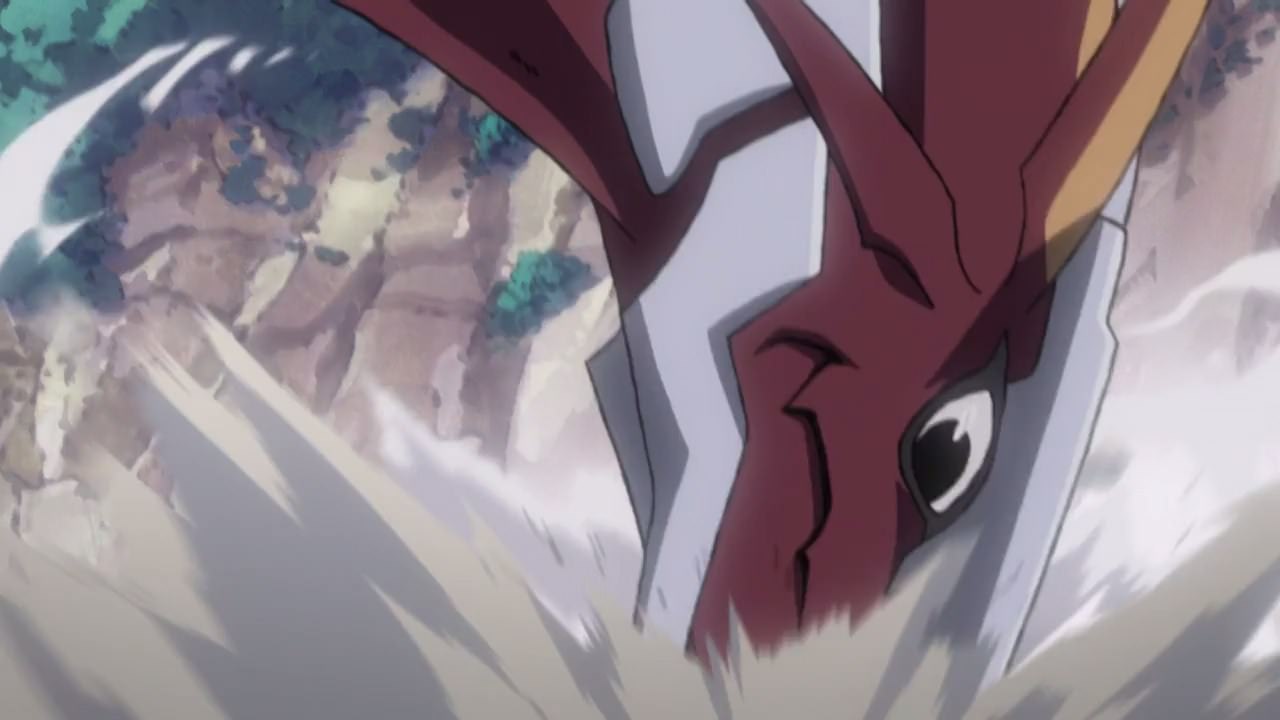 With that said, Norma proceeds to gobble Senior Master Sergeant Hoshino up because that’s how dragons do… 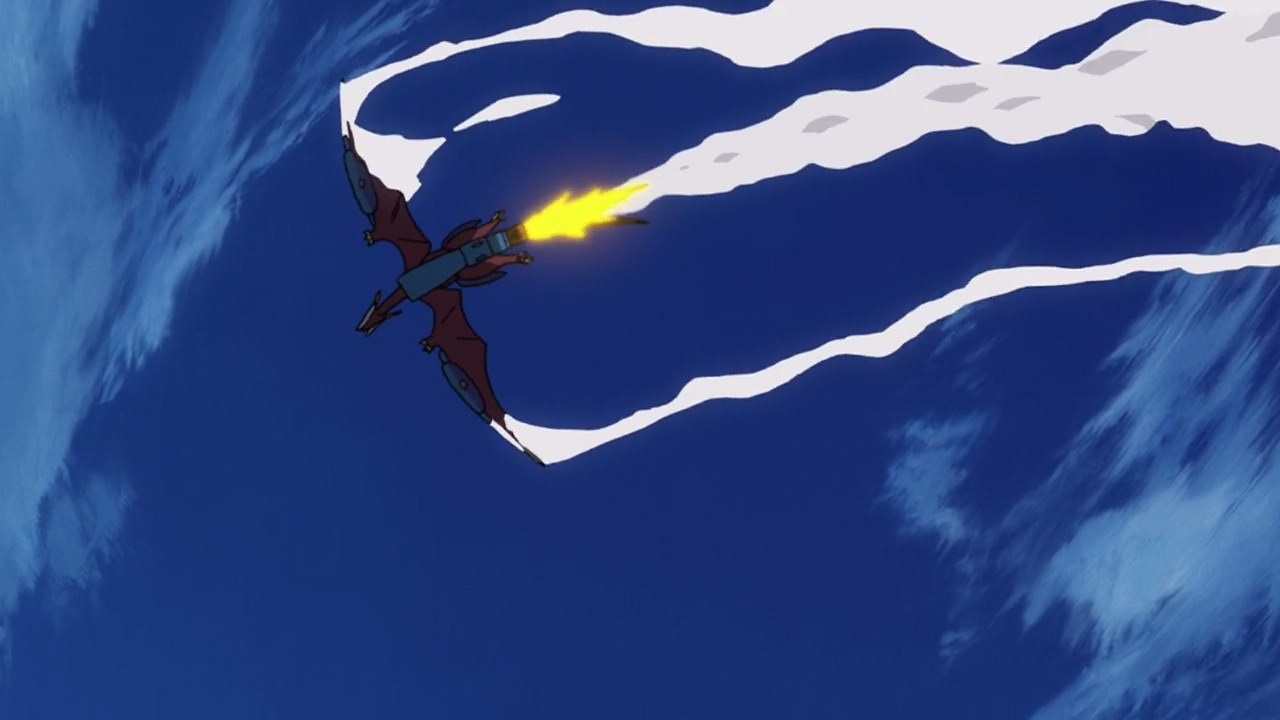 …and fly away to cool itself down. Well, looks like Norma will live to fly another day. 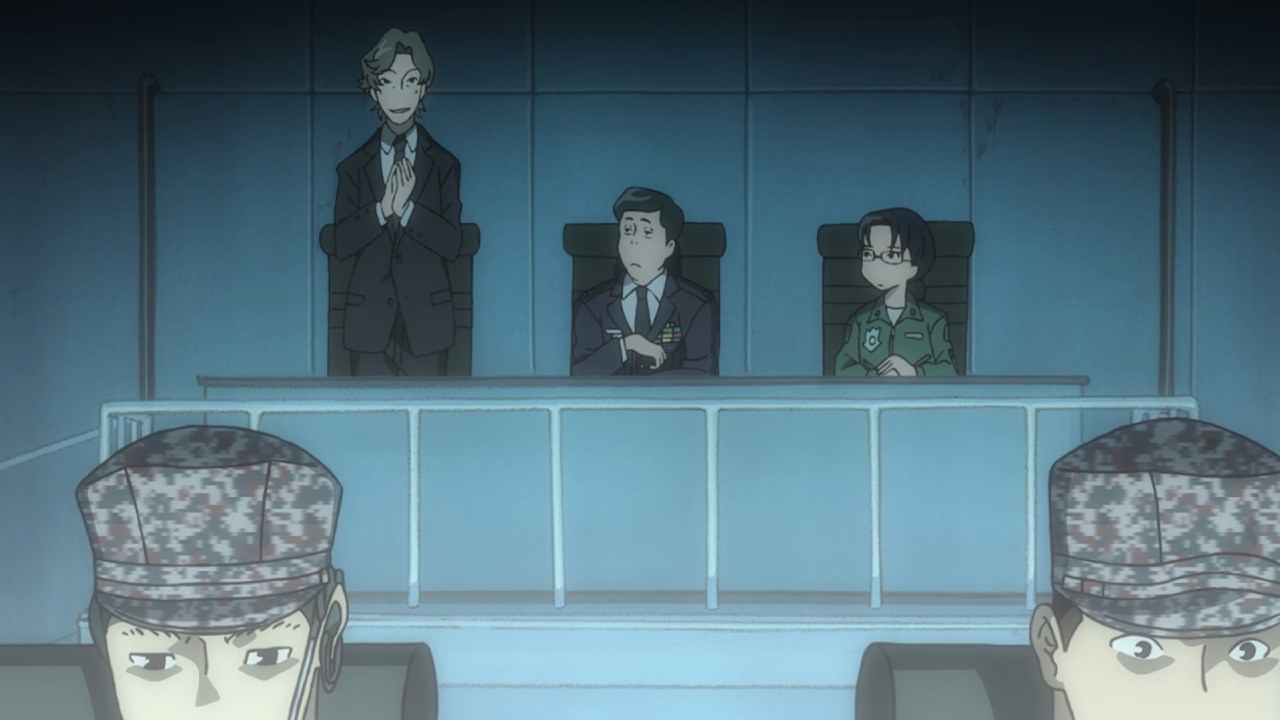 Meanwhile, both Administrative Vice-Minister Iiboshi and Commander Hiroshi Sosoda are delighted that the D-Pilots managed to overcome the week-long survival test, especially Eru Hoshino where she finally recognize her F-2 as a dragon.

Because of this, seems that the girls can finally go home instead of being rescued by the Japan Air Self-Defense Force. Y’know that they might lose their license if they wait for too long. 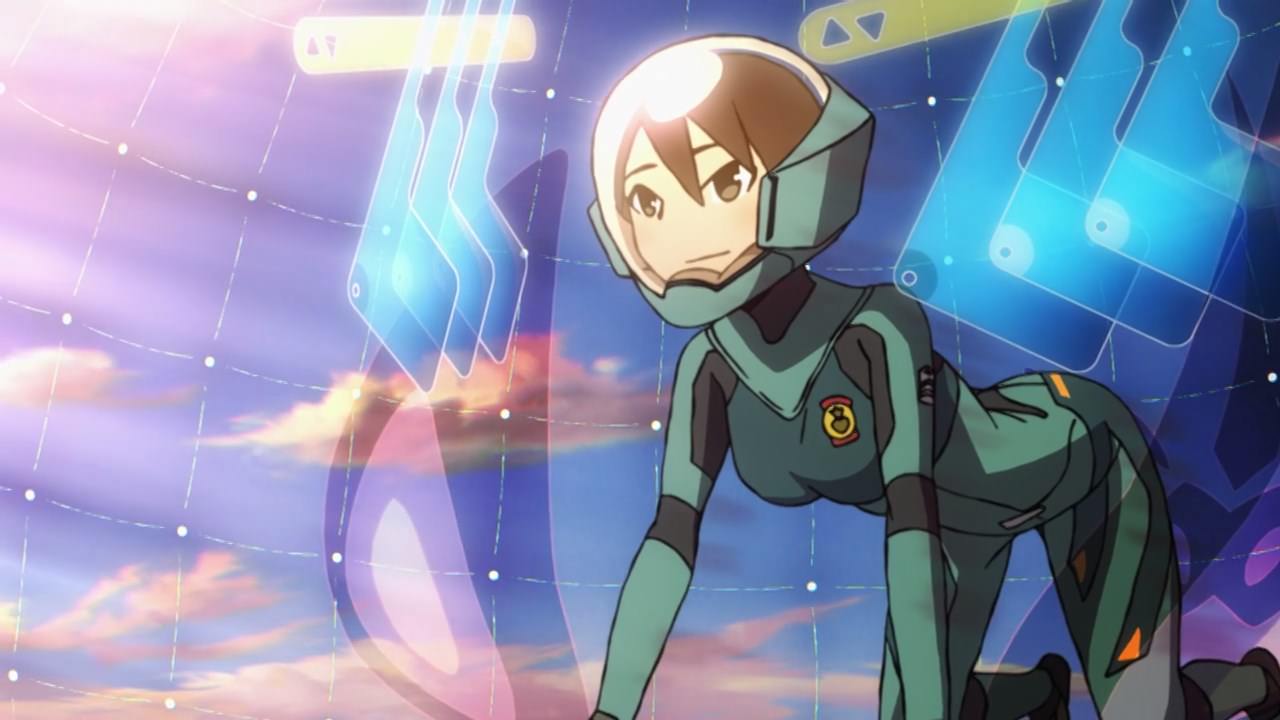 Of course, it’s just the beginning for her as with Norma, Eru can fly freely together with her fellow D-Pilots! And seriously, she needs to treat her OTF dearly or Norma might go berserk again. 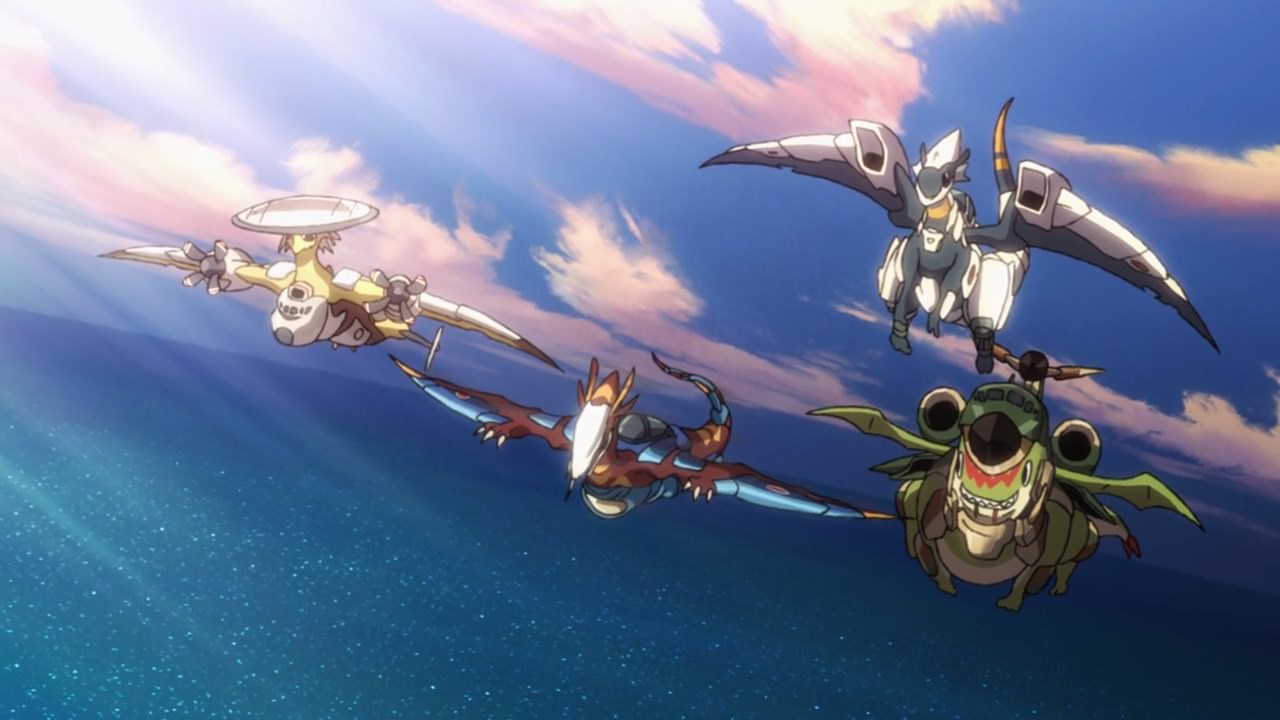 Looks like it’s time for me to end this episode as the D-Pilots will arrive at the Gifu Air Base shortly.

Now then, if only Nao Kaizaki will get her own Organic Transporting Flyer real soon…