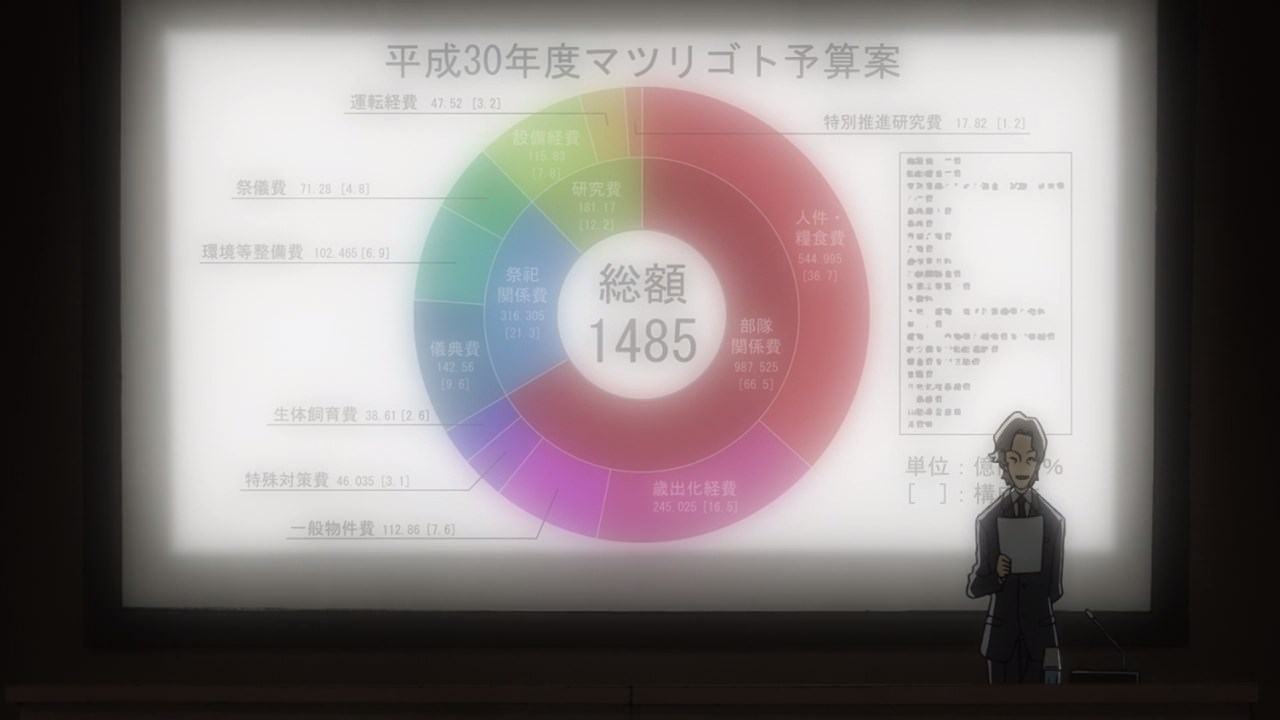 On this week’s episode, Administrative Vice-Minister Iiboshi proposes a plan towards the higher brass in regards to the D-Pilots and their complete sub- I mean integration to their Organic Transport Flyer via a special ritual.

Problem was the cost of performing this ritual is more than a trillion yen that no one will fit the bill for Iiboshi’s plan. For now, his only focus is to find a way for the D-Pilots to completely attach to their OTFs and the only keyword that Vice-Minister Iiboshi can think of is “Love”. 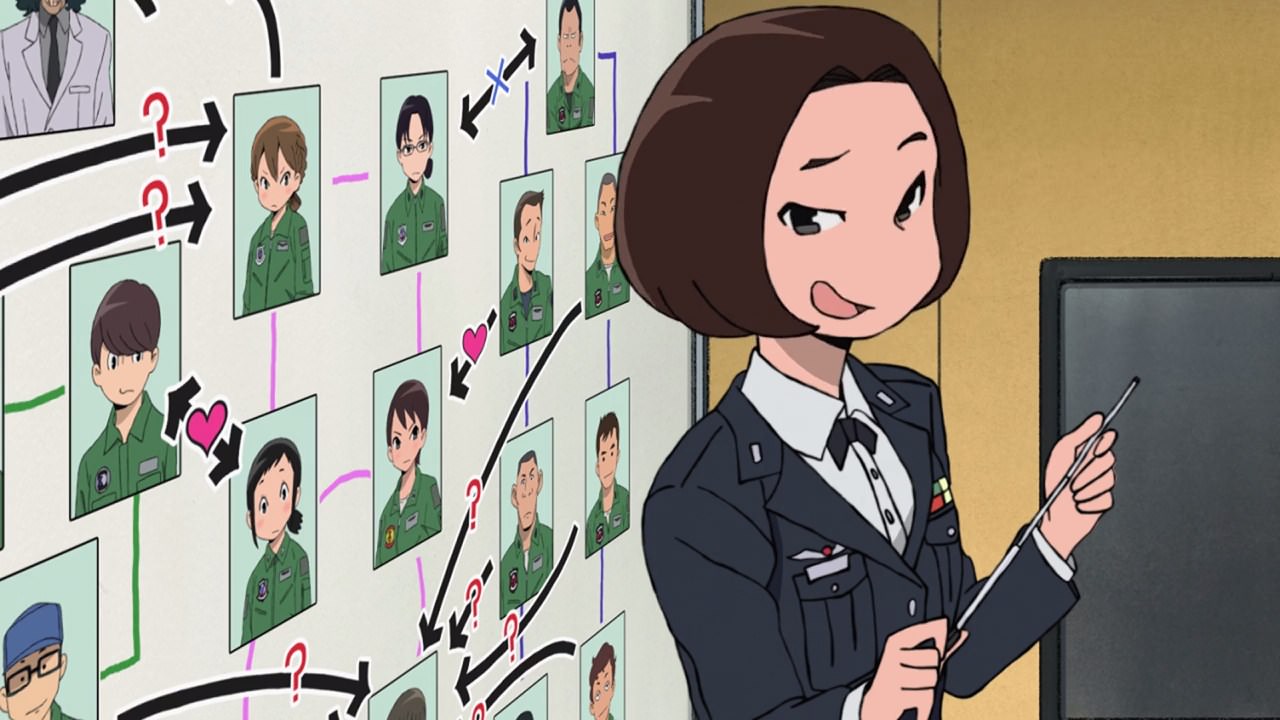 That’s where Staff Sergeant Akishima comes into play as she wants some staff from the Gifu Air Base to make the D-Pilots fall in love in them… and then break their hearts until the D-Pilots submit themselves to their OTFs. 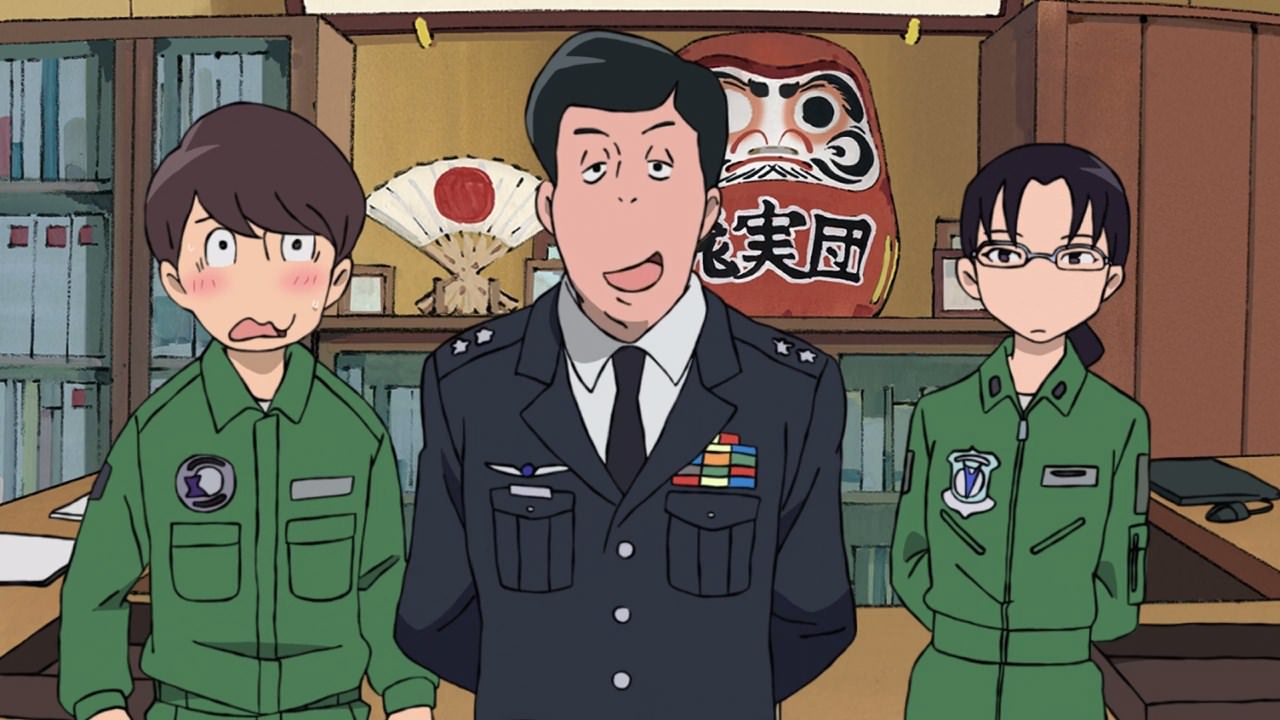 Yeah, it’s a simple and deadly plan that Haruto Okonogi, who has rumors that he’s in love with Hisone Amakasu, found it absurd. As for Lieutenant Colonel Remi Kakiyasu and Commander Hiroshi Sosoda, they’re okay with this plan.

Well, we can’t help it but to follow Iiboshi’s orders and while this plan won’t include Nao Kaizaki for now (since she doesn’t have her own OTF), the only thing they need to deal with are Hisone Amakasu, Mayumi Hitomi, and Eru Hoshino. Wait, what about Ririko Kinutsugai? 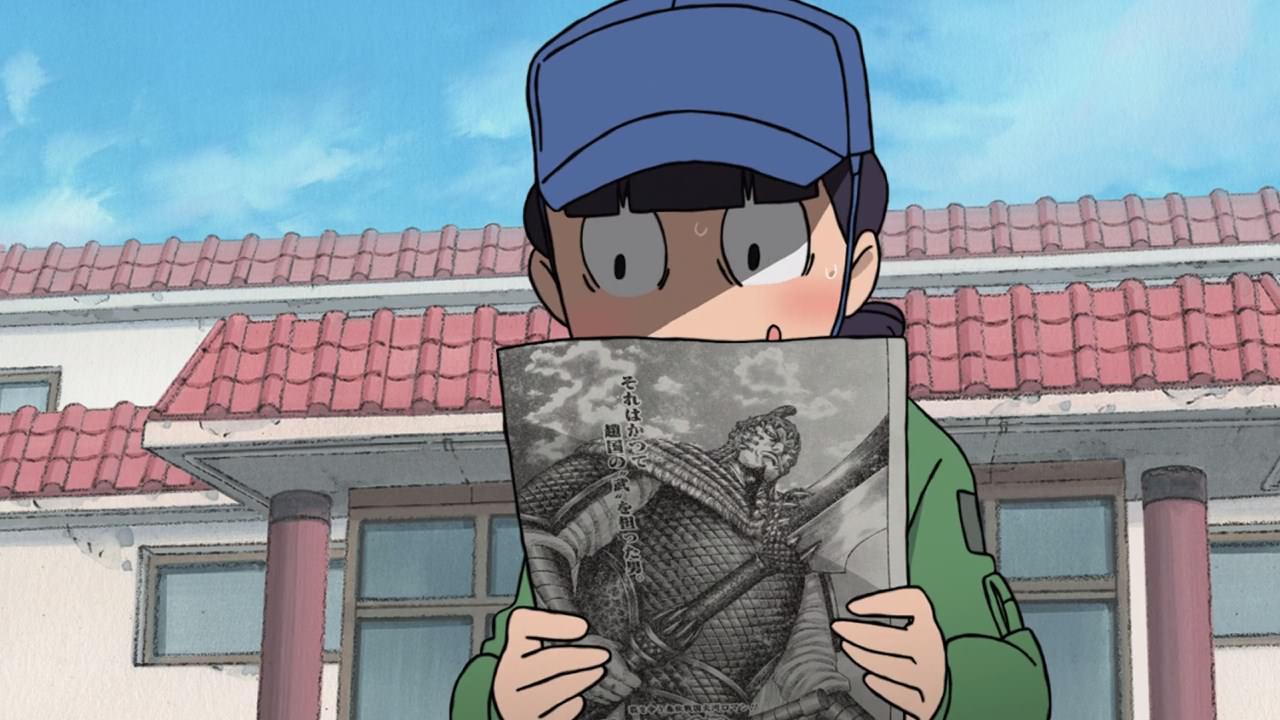 Oh, seems that Jimmy (or Lilikos) is not interested in intimate relationship as she wants to read a chapter of Yasuhisa Hara’s Kingdom from Weekly Young Jump.

Fortunately, she found a page that was scattered on the ground. Hmm, I have a feeling that it’s a trap. 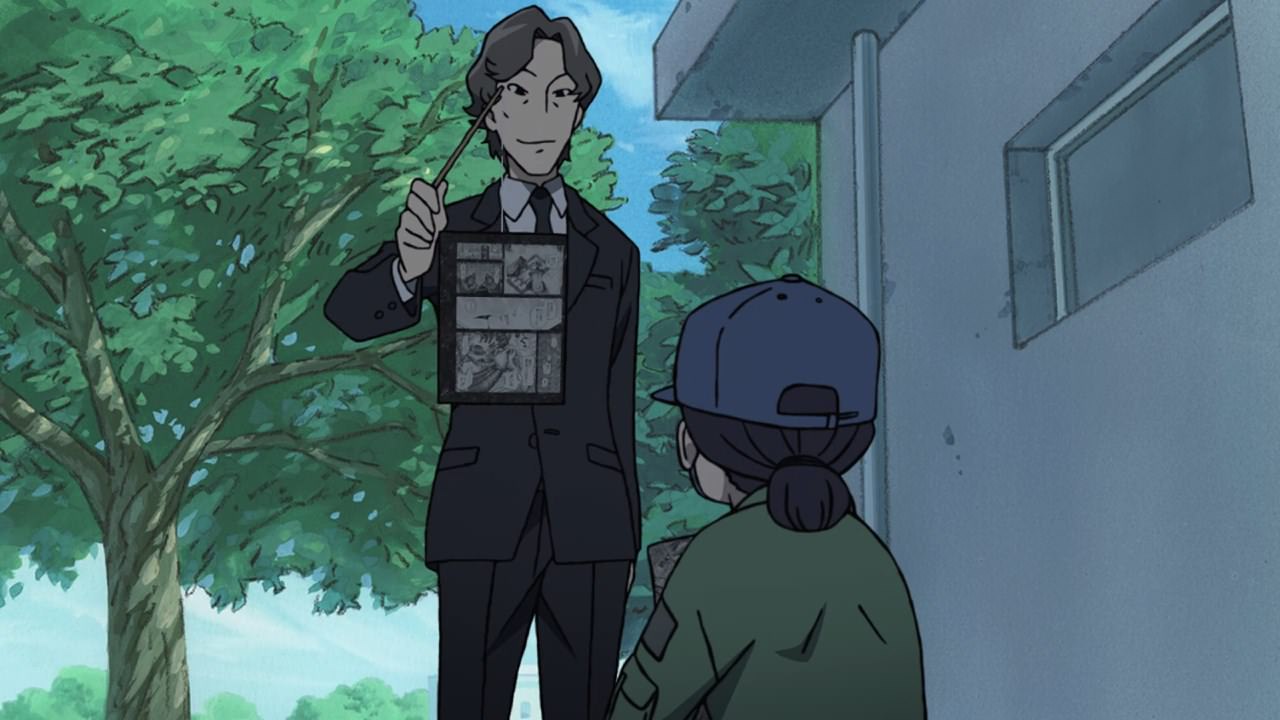 Why yes it is as Administrative Vice-Minister Iiboshi is baiting Ririko Kinutsugai on giving her a page of the latest chapter.

Anyways, Iiboshi asked Kinutsugai a favor on snooping in some info on the D-Pilot’s preferences, especially their potential boyfriends, in exchange for a page of the latest chapter of Kingdom. Oh, and he’ll throw in the chapter for the next issue too. Come to think of it, is Vice-Minister Iiboshi has sone connection with Shueisha? 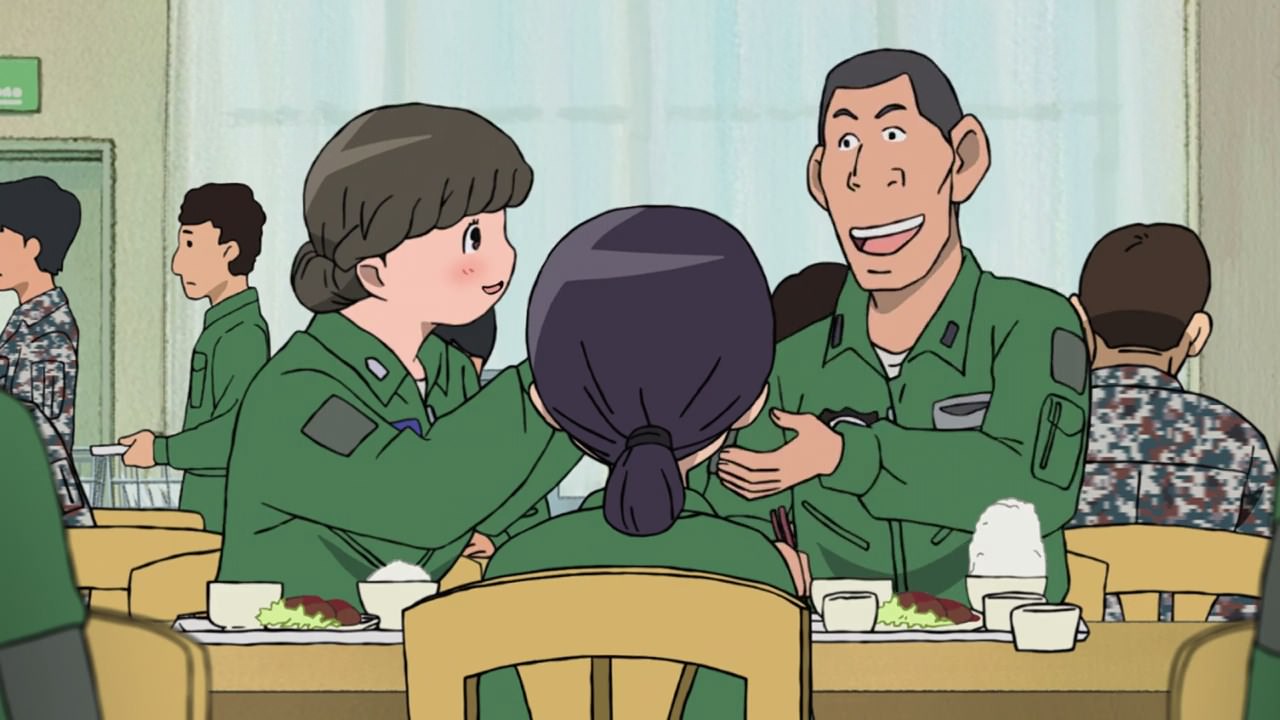 Now then, let’s start things off with Mayumi Hitomi. While I wanted to start off with Eru Hoshino, let’s just say that we already know that she hates Yutaka Zaitou for being a creep. 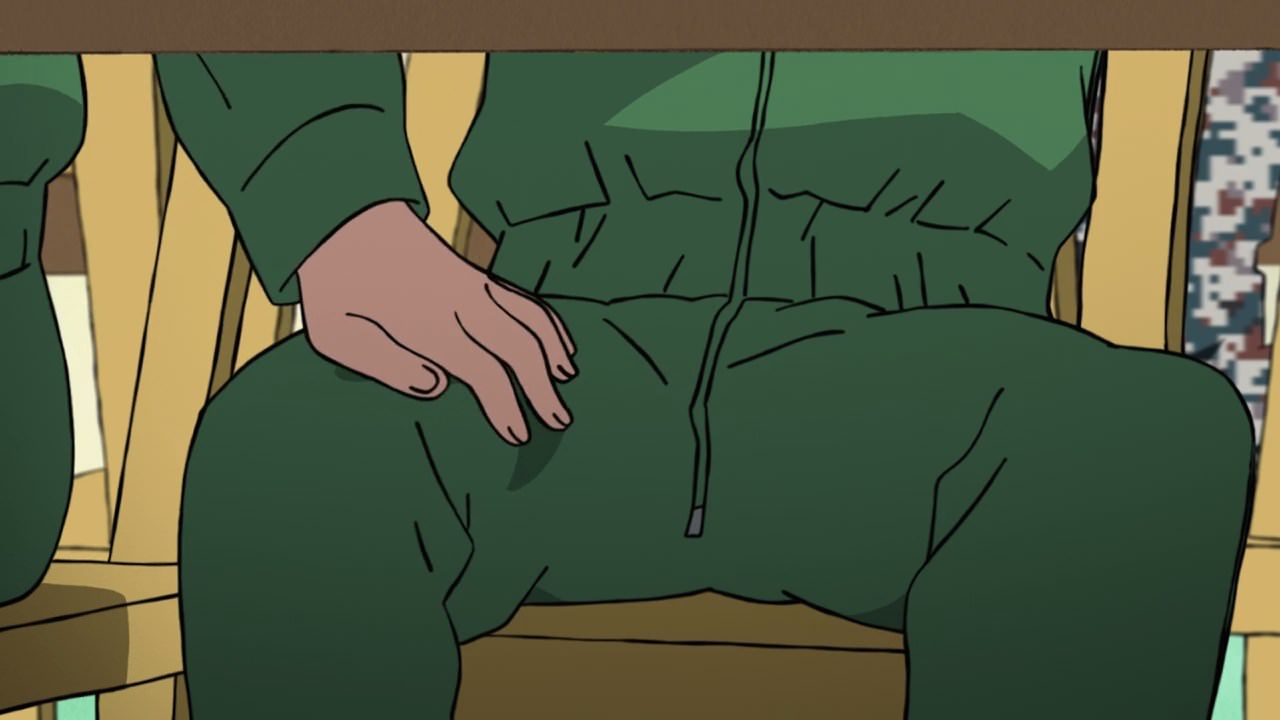 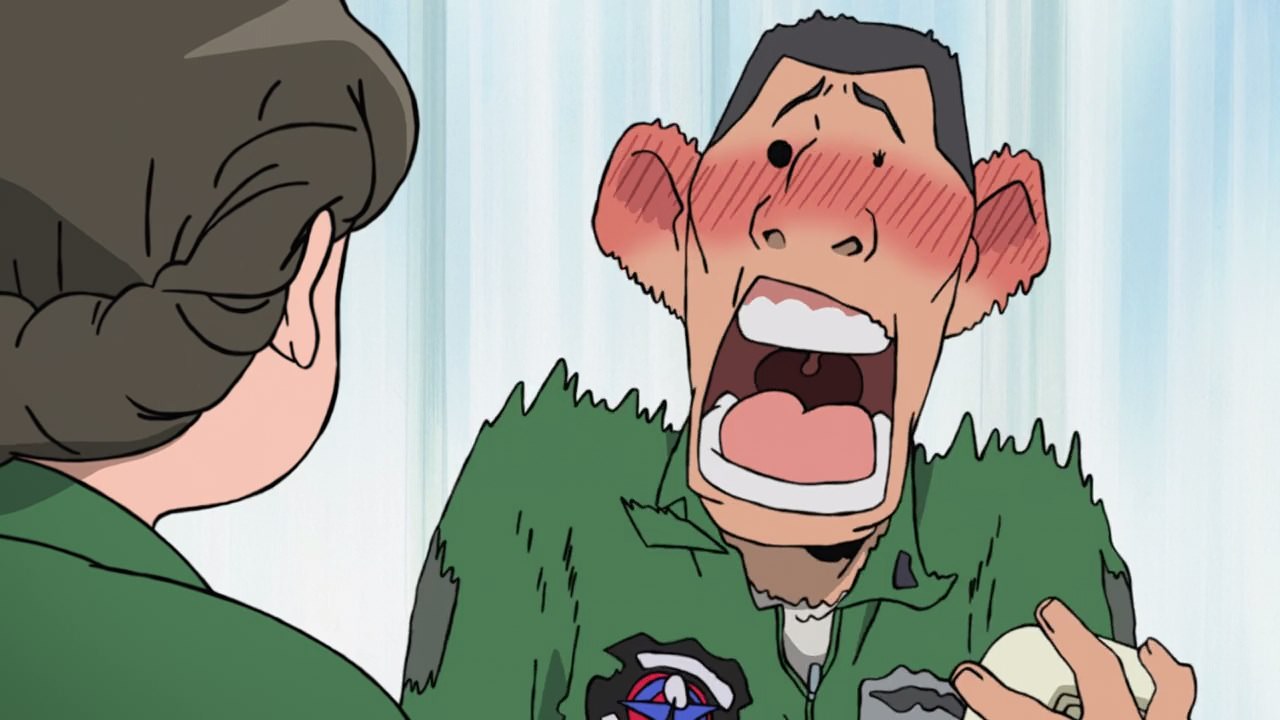 But then again, seems that Technical Sergeant Hitomi has some curiosity when it comes to men, especially down their crotches.

Oh boy, looks like Mr. Pilot has popped up a boner after being touched by Mayumi’s soft hands. That’s hella lewd there! 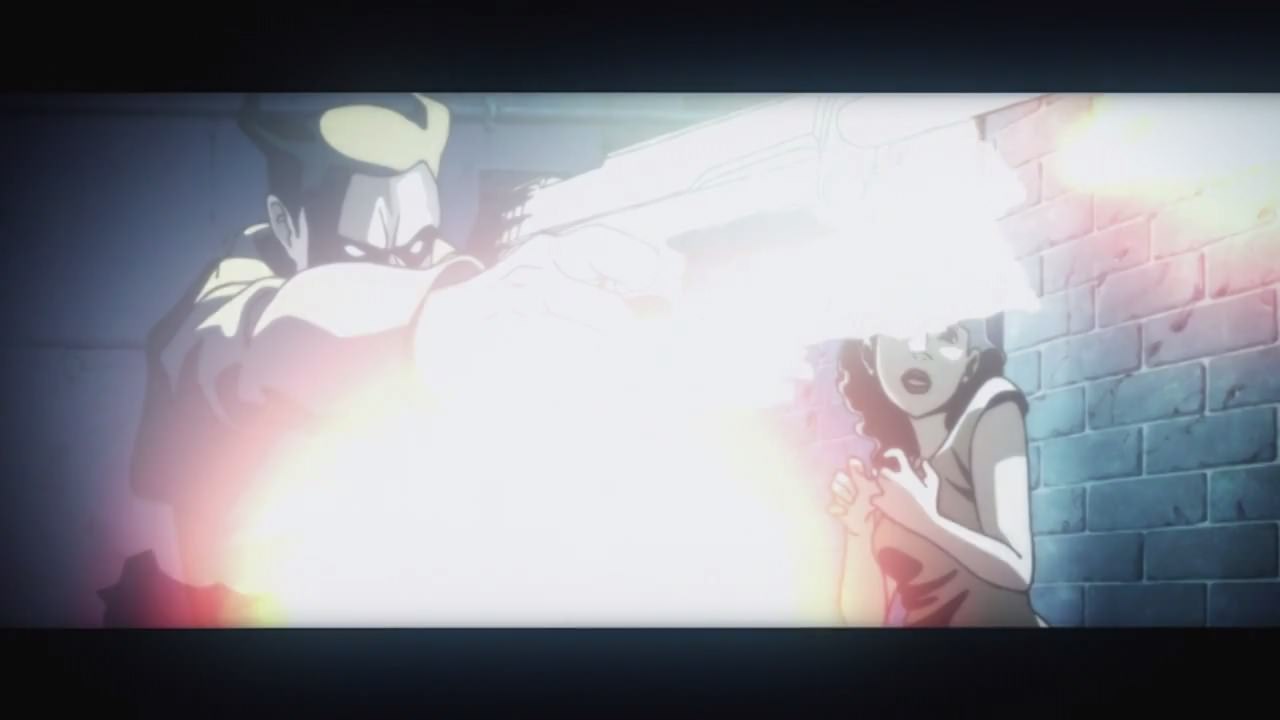 Meanwhile, let’s move onto Haruto Okonogi as he invited Hisone Amakasu for a date. Don’t worry, Okonogi got permission from Commander Sosoda since it’s part of the mission.

Anyways, Okonogi and Amakasu went to a cinema where they watched a cheesy horror movie. Well, we’ll not gonna talk how bad the movie is. 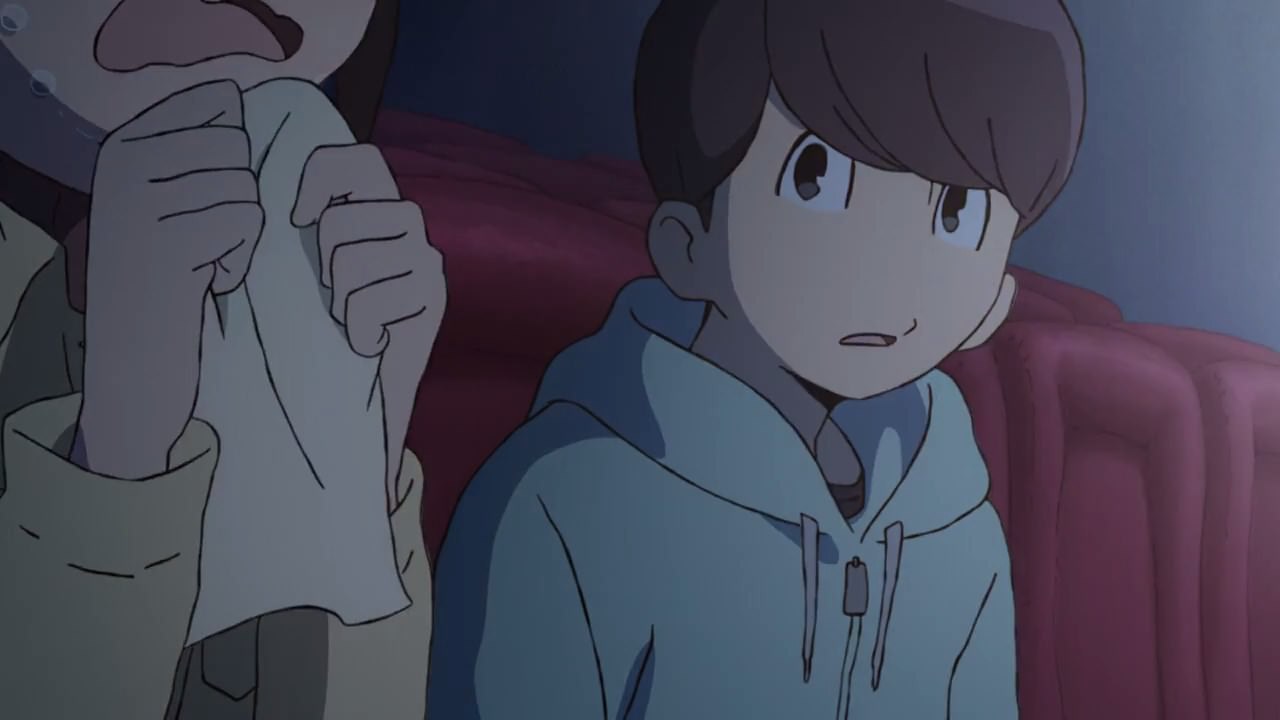 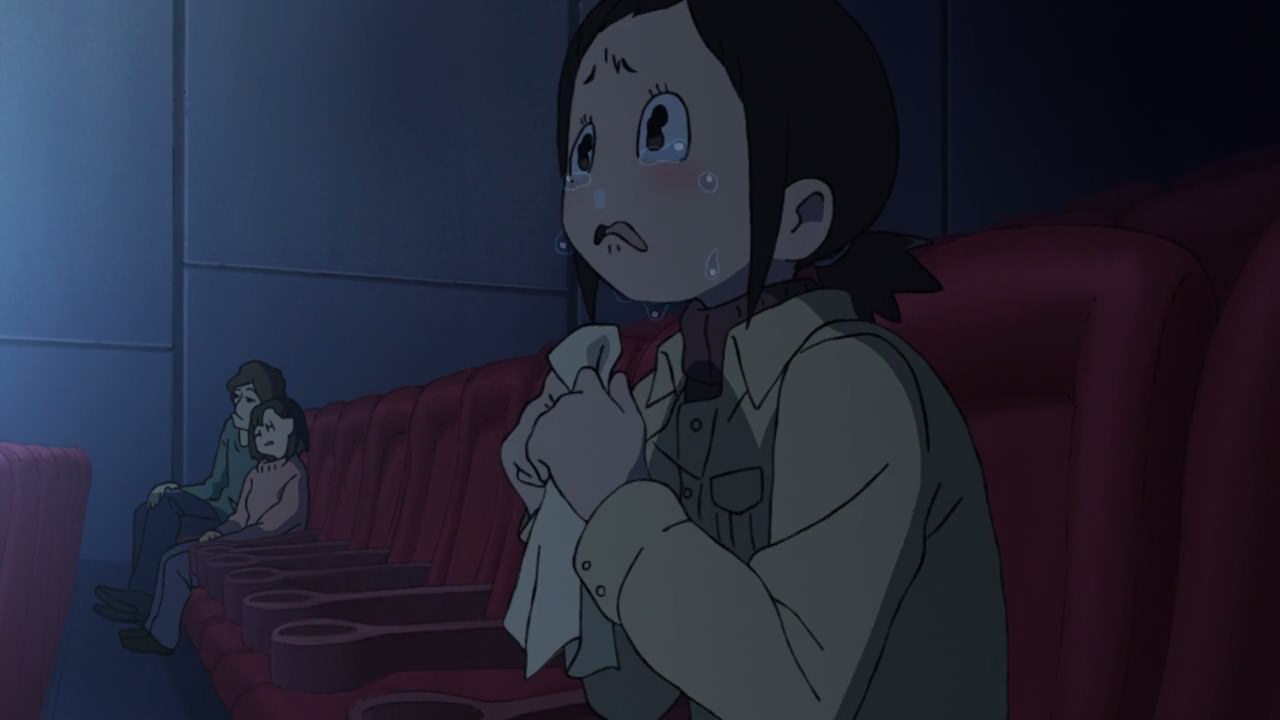 But, Haruto Okonogi saw Hisone Amakasu crying a lot after watching it. No, she’s not crying about the shoddy quality, Hisone is in tears because the characters die in a gruesome manner.

In any case, seems that they finished watching the movie so what’s next for both Haruto and Hisone? 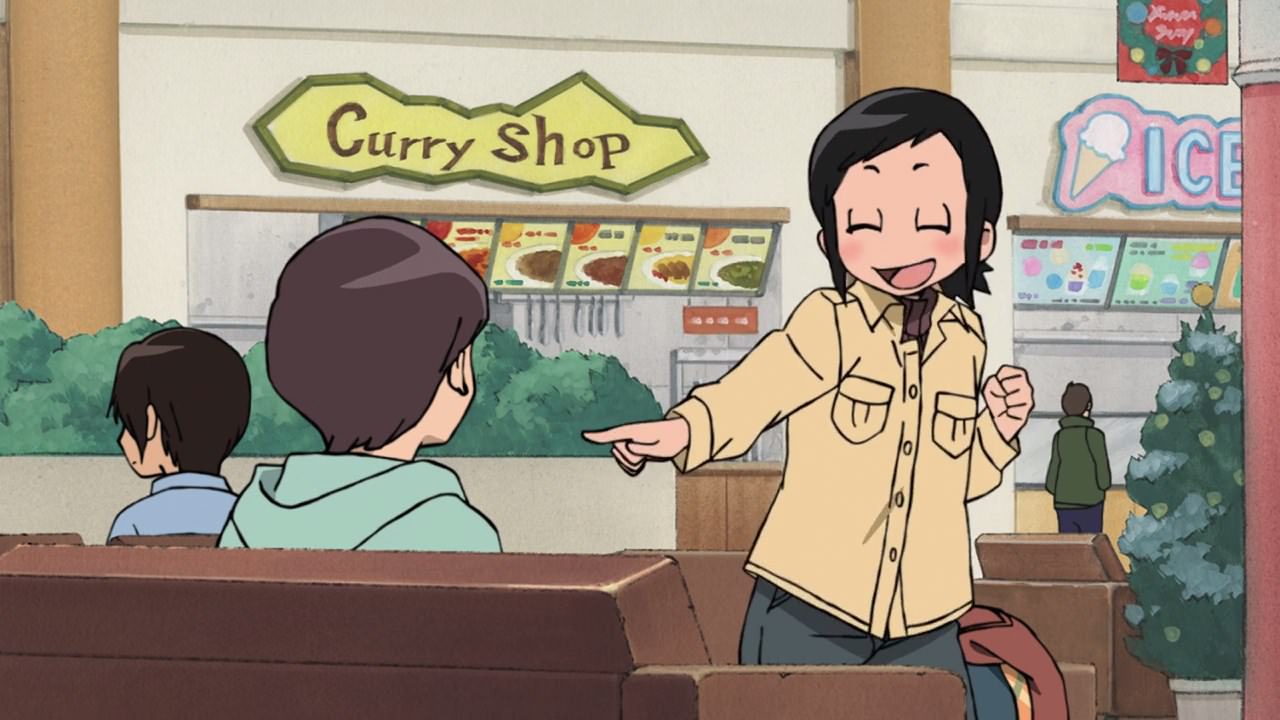 Well, they decided to hang out at a food court and they’re having a good time as they talk about their lives and such.

By the way, seems that Haruto went to Gifu Air Base because of his parents since they’re somewhat linked to the dragons. Wait, is Haruto’s family are actually shrine priests? 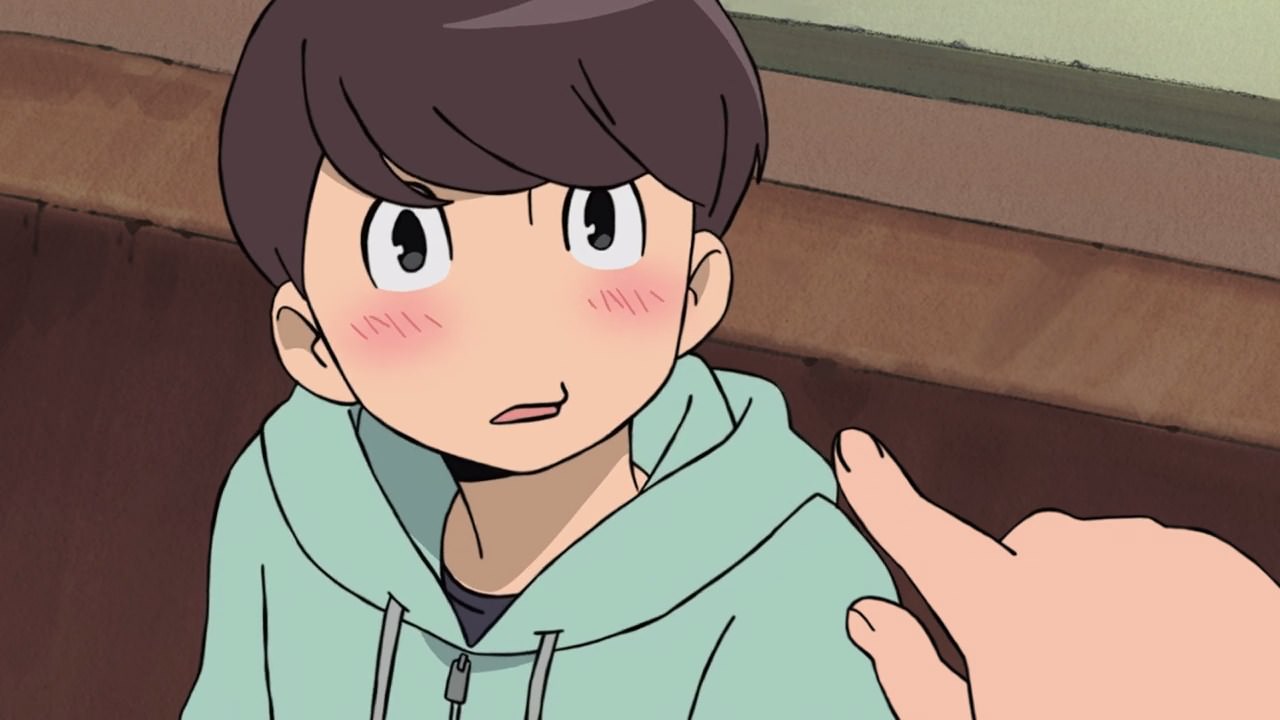 With that said, looks like both Haruto Okonogi saw Hisone Amakasu will remain friends for now. Just friends!

Then again, looking at Haruto’s face means that he can’t break Hisone’s heart. Don’t give up there, Okonogi! 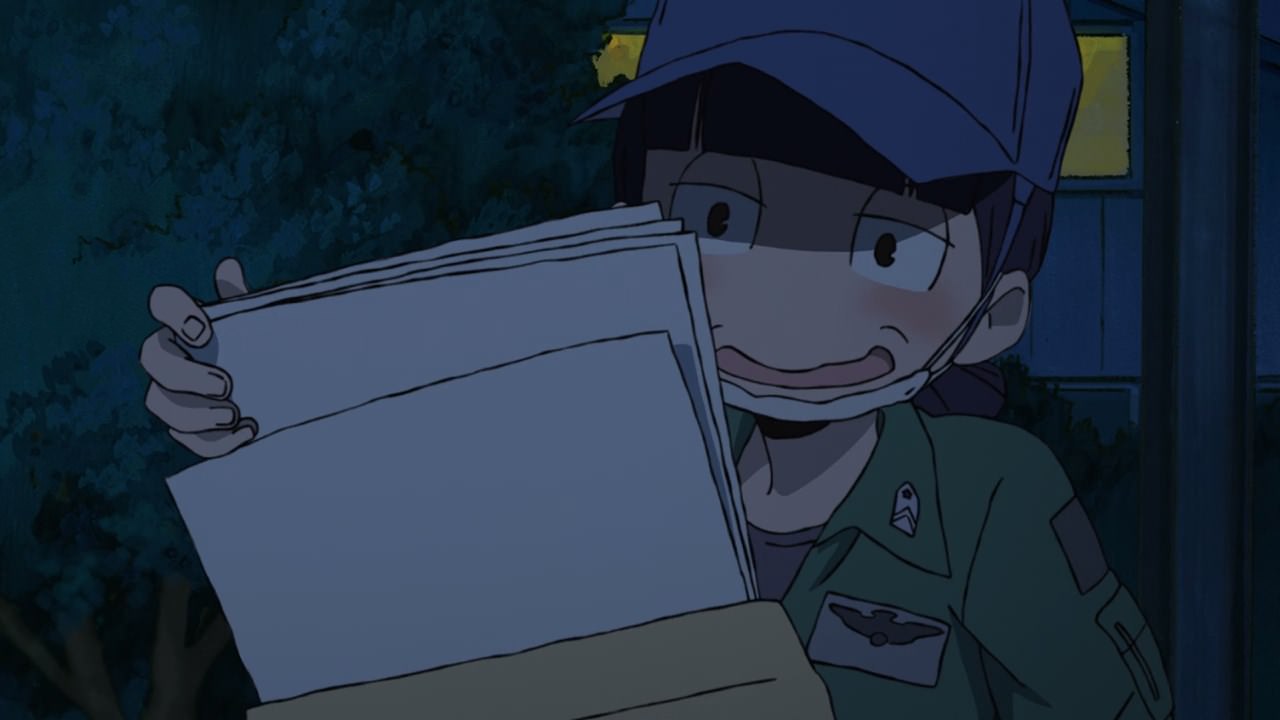 Lastly, let’s go back at Ririko Kinutsugai as she got the next chapter of her favorite manga after a day of finding her fellow D-Pilots’ likes and dislikes. 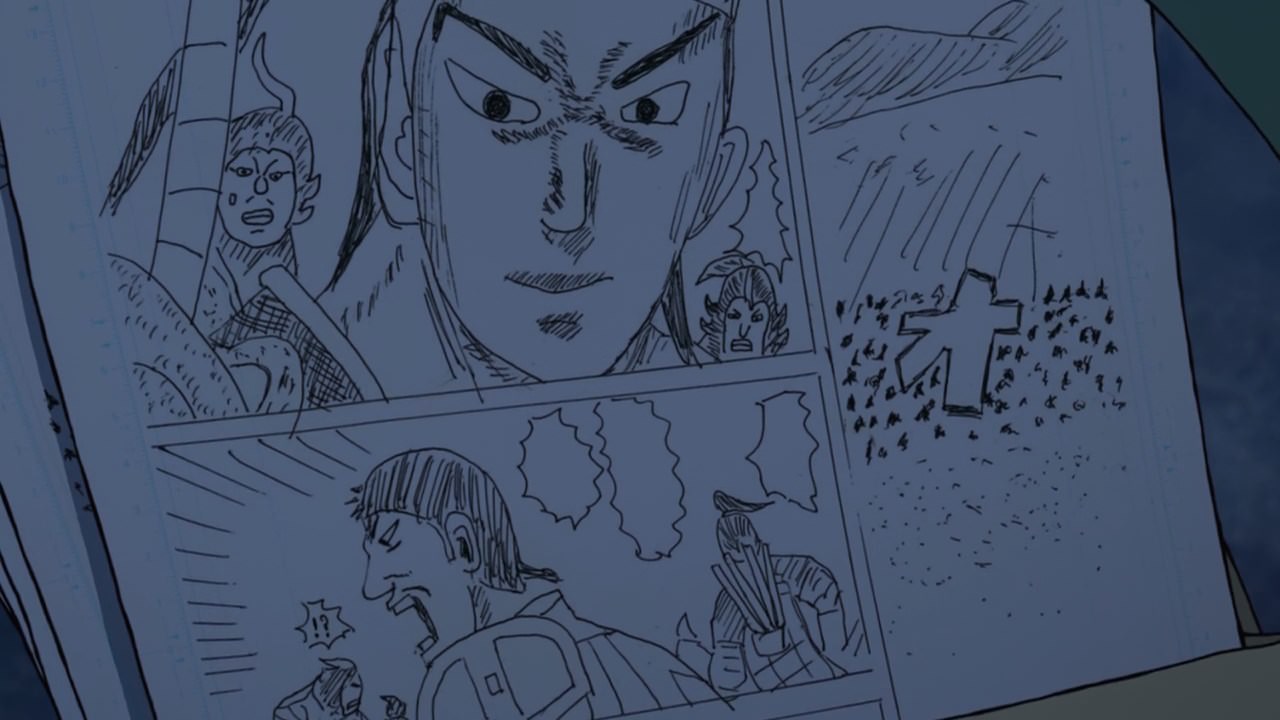 Unfortunately, what Jimmy got was an inferior version of the next chapter of Kingdom. Well, it’s either the author made a shitty version or it’s just that Vice-Minister Iiboshi duped Kinutsugai.

Well guys and girls, that was an interesting episode in regards to Haruto Okonogi and his relationship to Hisone Amakasu. Sadly, he can’t do the deed as Haruto saw Hisone as a cheerful girl despite having no personal space when doing a monologue to herself.

Now then, I’ll see you next time as it appears that Administrative Vice-Minister Iiboshi has managed to take a glance on Sada Hinomoto. I wonder what his obsession towards that old lady?