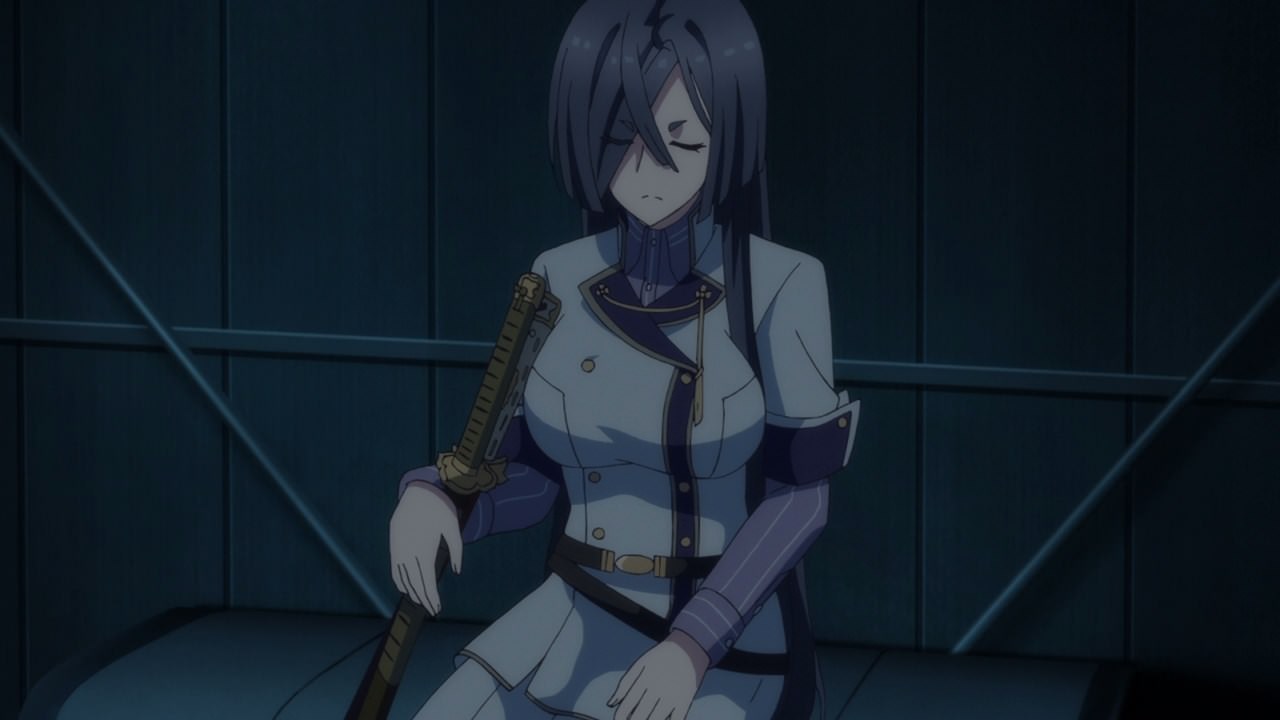 Here’s Yukari Origami to start this week’s episode as she’s taking a rest after fending off the toji from Ayanokouji Martial Arts School while protecting Princess Ichikishima at the same time. 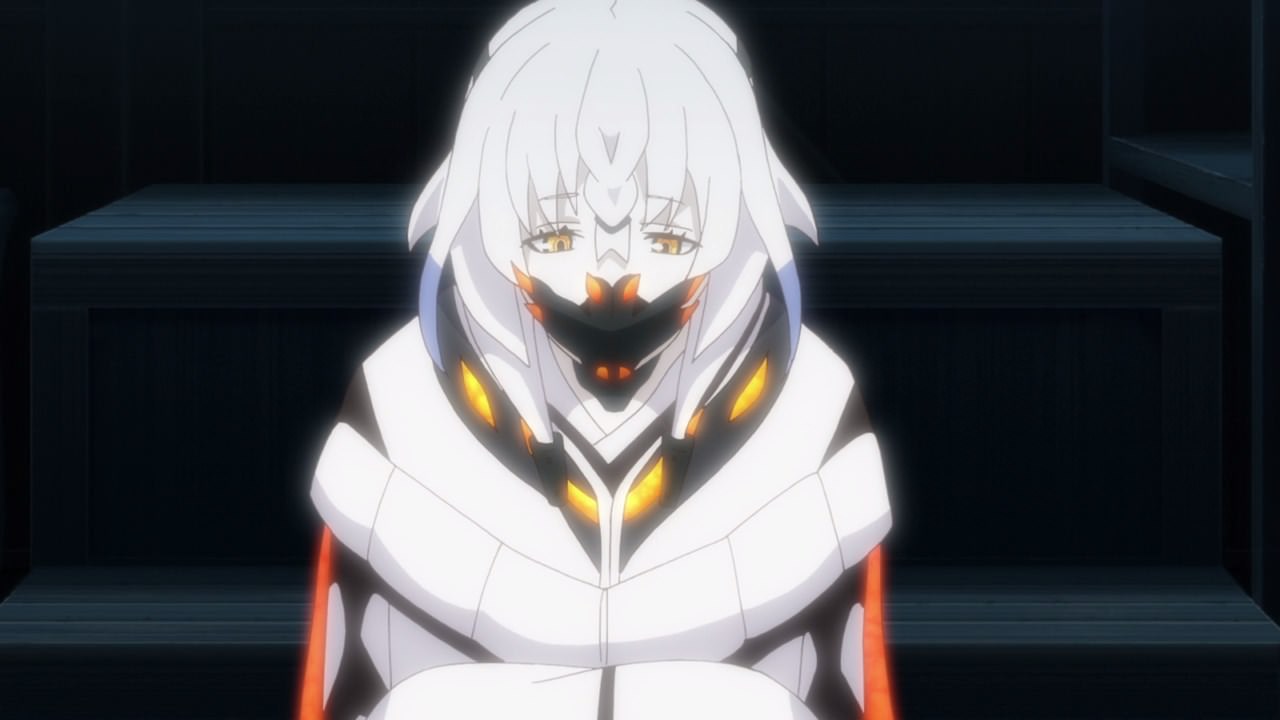 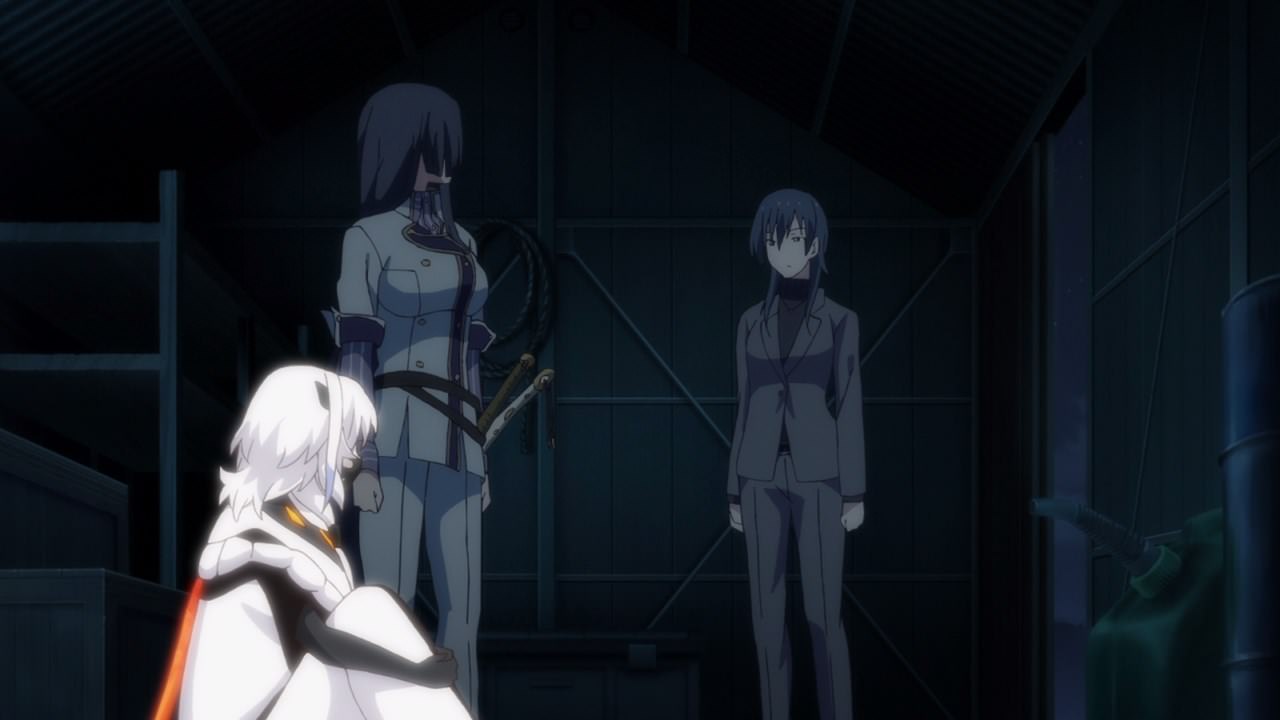 On the other hand, here’s President Yuzuki Souraku as she’s not here to apprehend both Yukari Origami and Princess Ichikishima as President Souraku wants Yukari-sama to condemn her for various crimes ranging for letting Yume Tsubakuro die to forcing her students to undergo an enhancement program under Yukina Takatsu.

But you know what, Yukari Origami wants to be condemned instead of Yuzuki Souraku as she’s the one who orchestrated the entire mess in the present after sealing Princess Tagitsu 20 years ago. 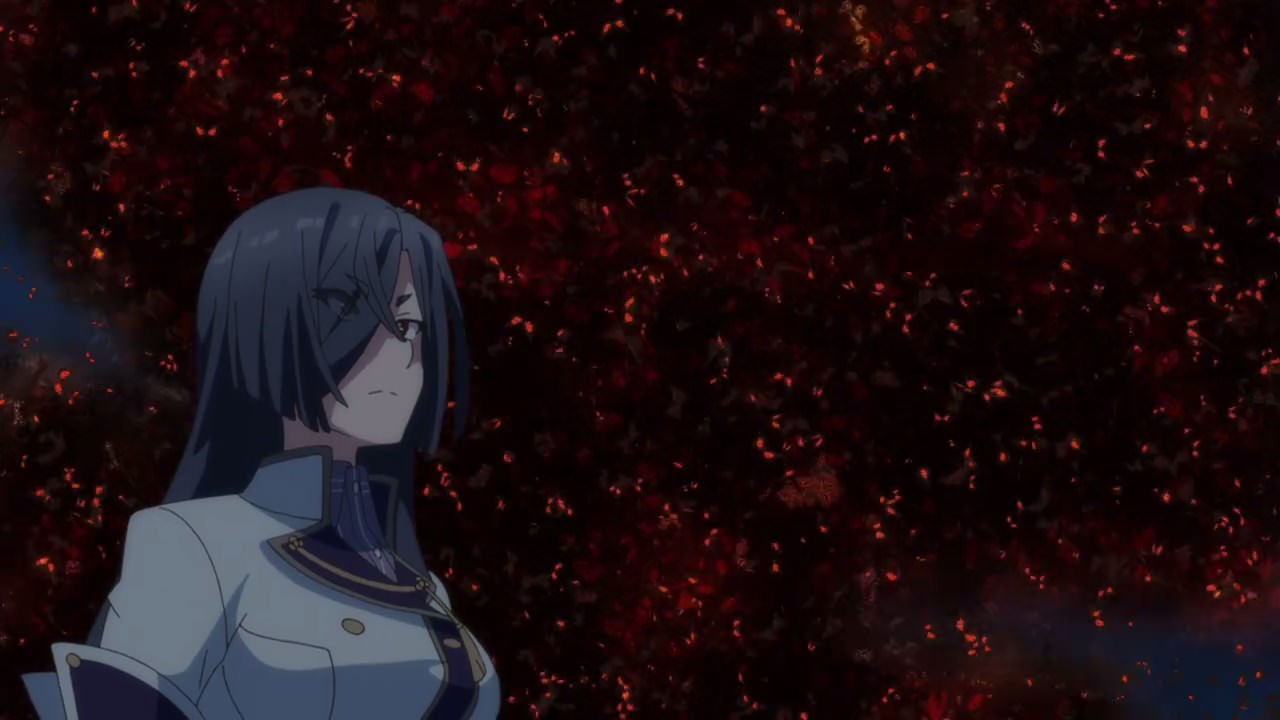 Now then, seems that their conversation got interrupted when a certain imperial guard has appeared, including her swarm of aratama insects. 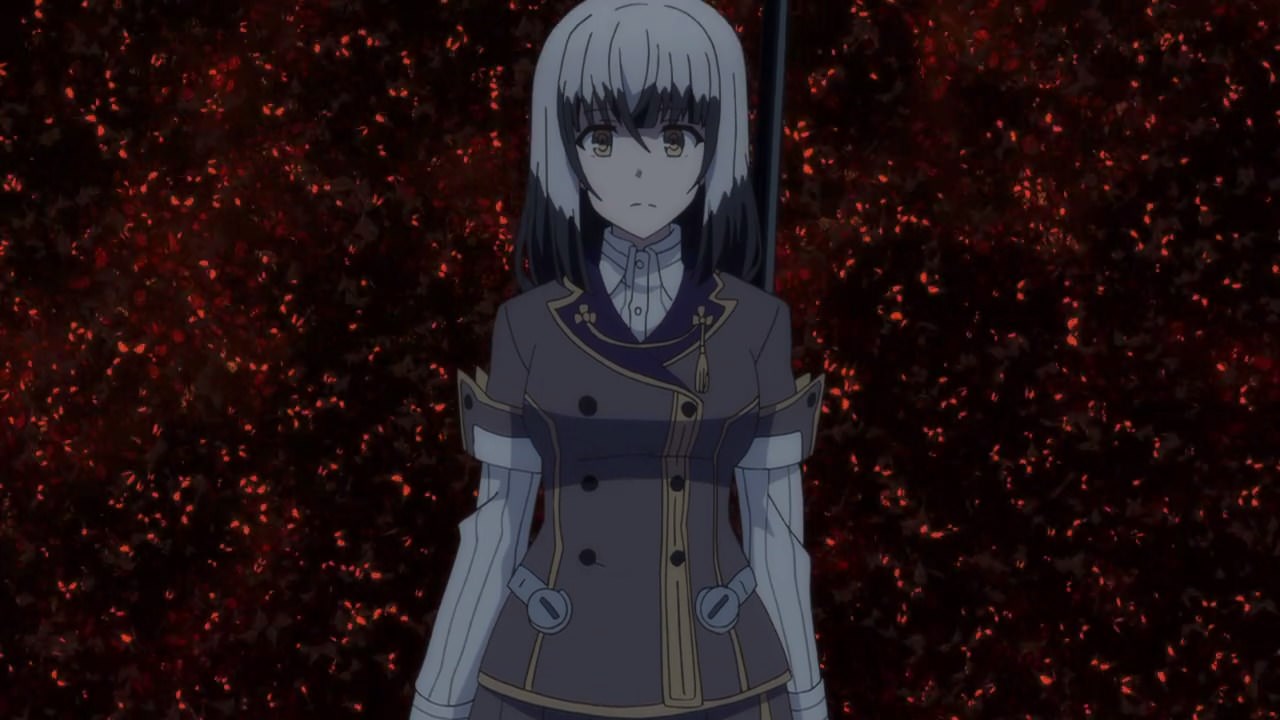 Yup, it’s Yomi Satsuki as she’s here to do the dirty work of capturing Princess Ichikishima and defeating Yukari Origami. 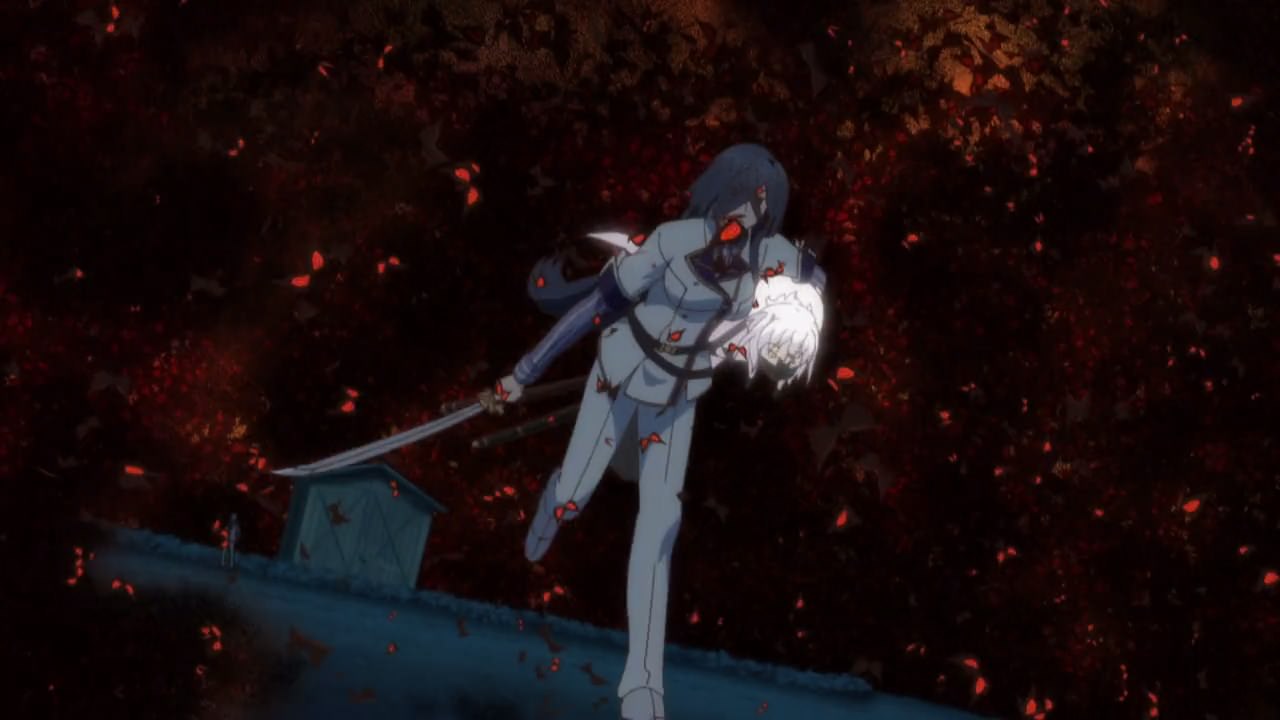 Then again, Yukari-sama doesn’t want to deal with Yomi Satsuki as she runs away together with Princess Ichikishima… 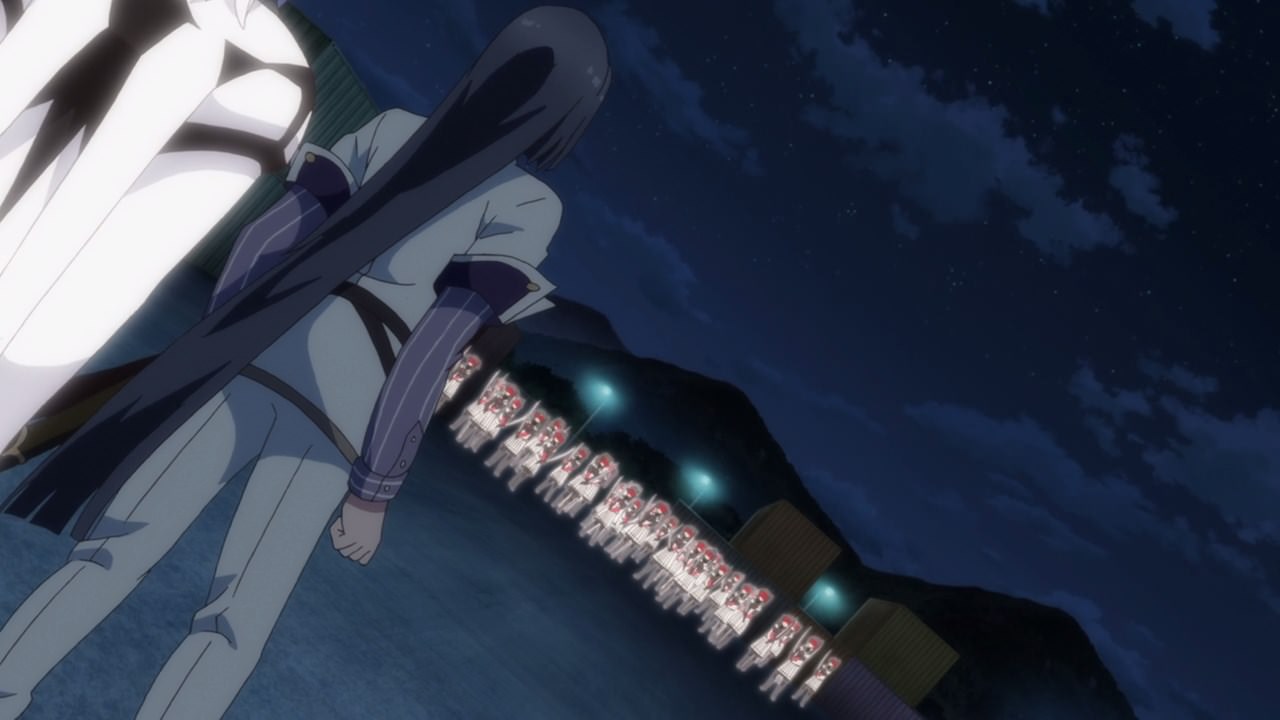 …only for Yukari Origami to encounter the toji from Ayanokouji Martial Arts School. Damn, what a bad timing that was! 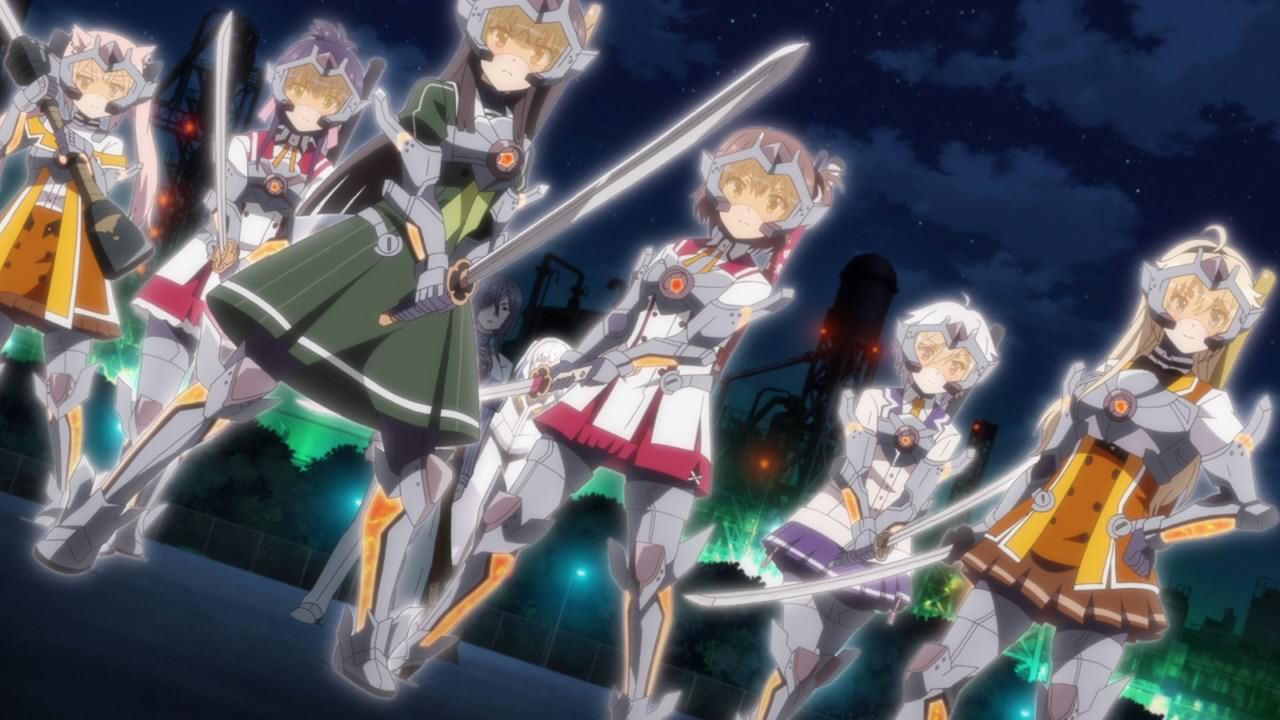 However, Yukari-sama and Princess Ichikishima are lucky today as Kanami Etou and her friends have arrived to rescue them.

Of course, Yukari Origami will just run away together with Princess Ichikishima. Um Yukari-sama, I think you should have a bodyguard or two if you want to escape. 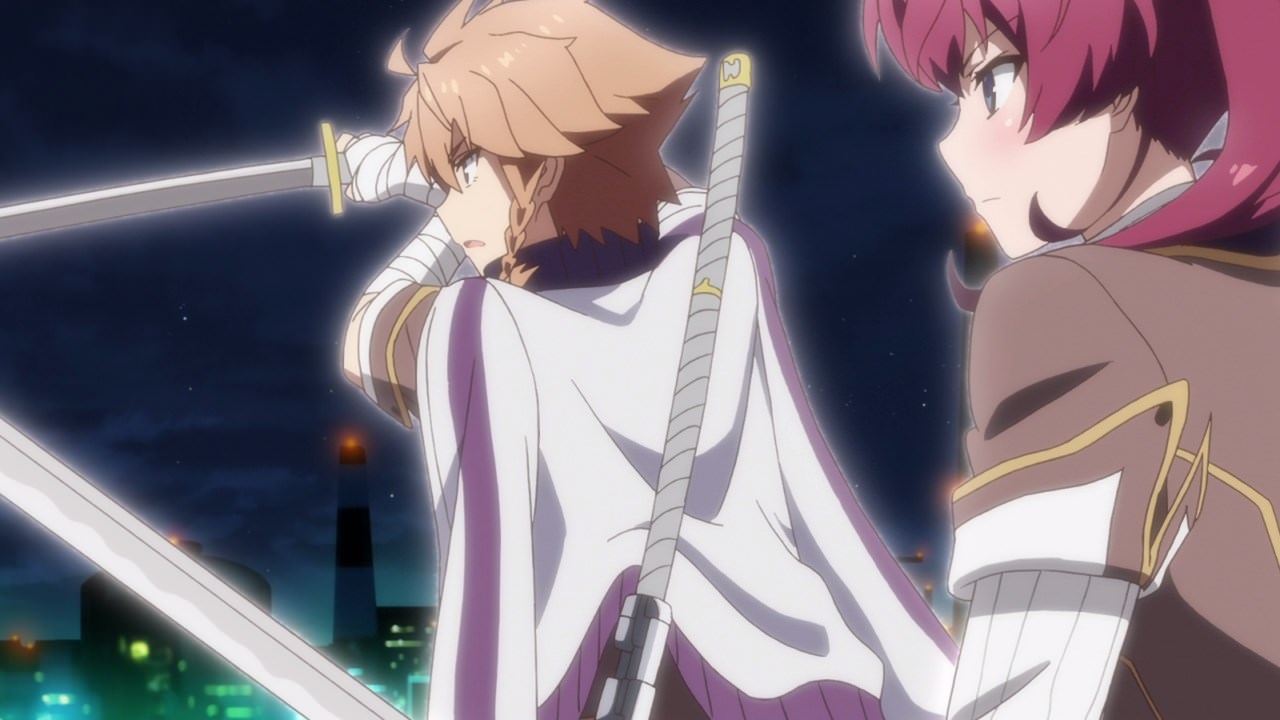 Meanwhile, here’s both Maki Shidou and Suzuka Konohana as they’re here to save Yomi Satsuki before it gets worse. 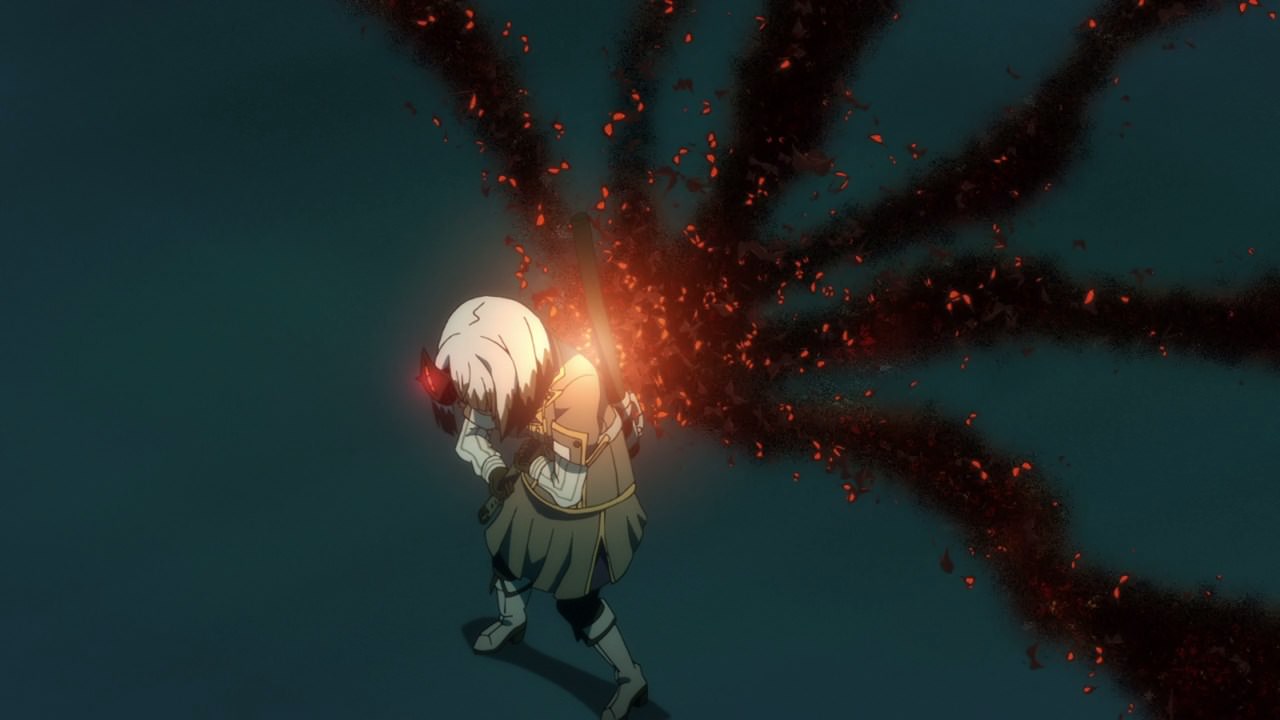 Then again, she’s beyond salvation as Yomi unleash her powers by stabbing herself. Ugh, using pain to get stronger is very nasty! 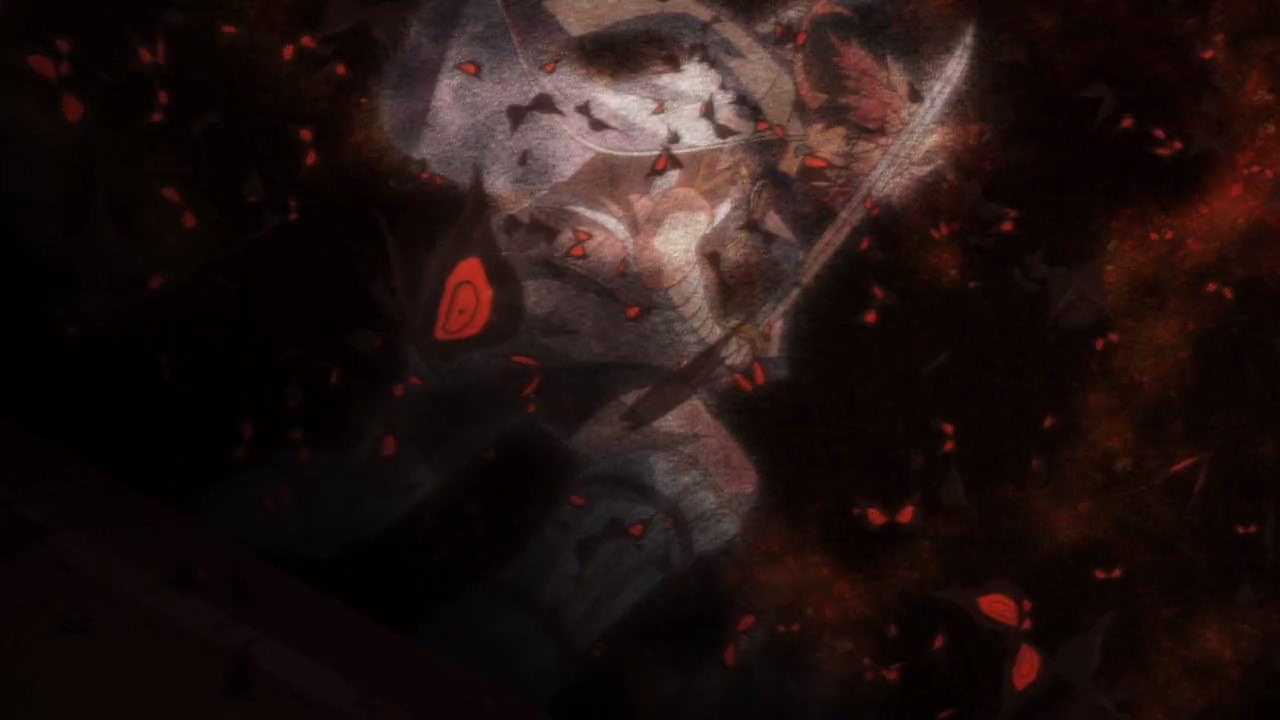 As a result, Yomi summons a large swarm of aratama towards Maki which she couldn’t move because of it. 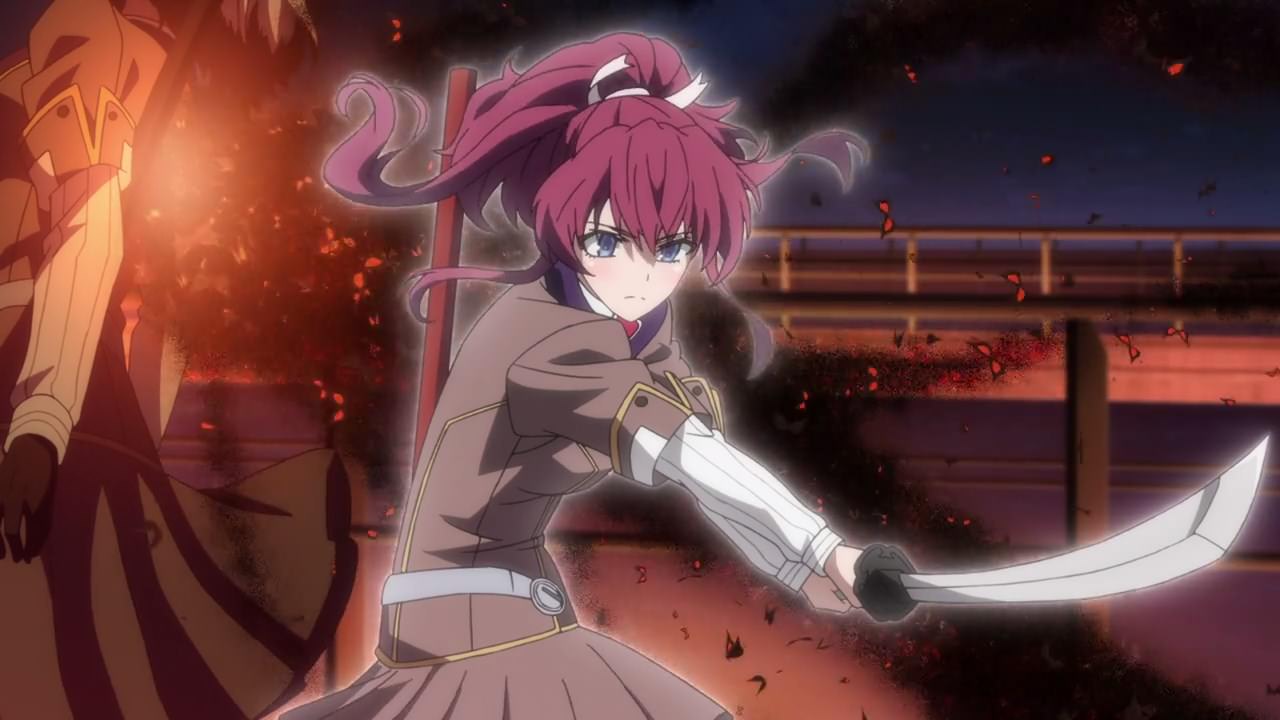 Fortunately, Suzuka managed to sneak in from behind and deliver a slash towards Yomi. Then again, Konohana has no other choice but to end Yomi Satsuki’s life. 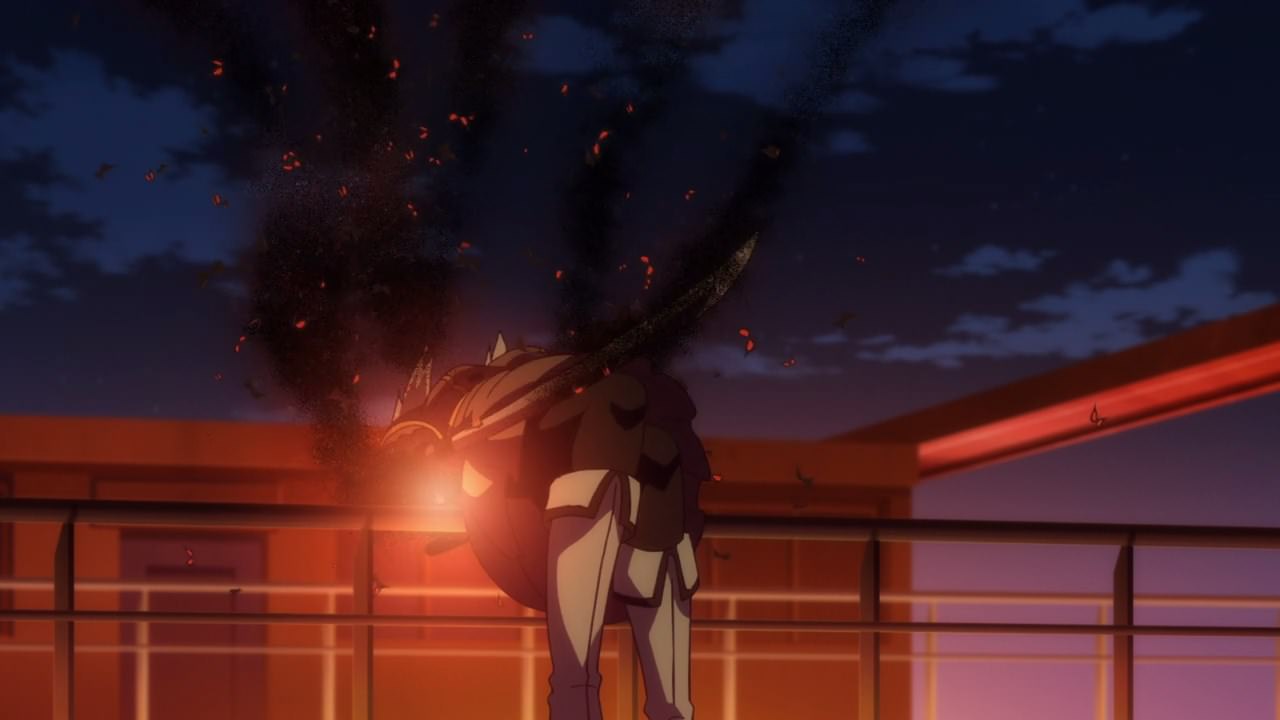 But you know what, it’s a shame that Yomi decided to stick with the abusive Yukina Takatsu instead of joining both Maki Shidou and Suzuka Konohana. 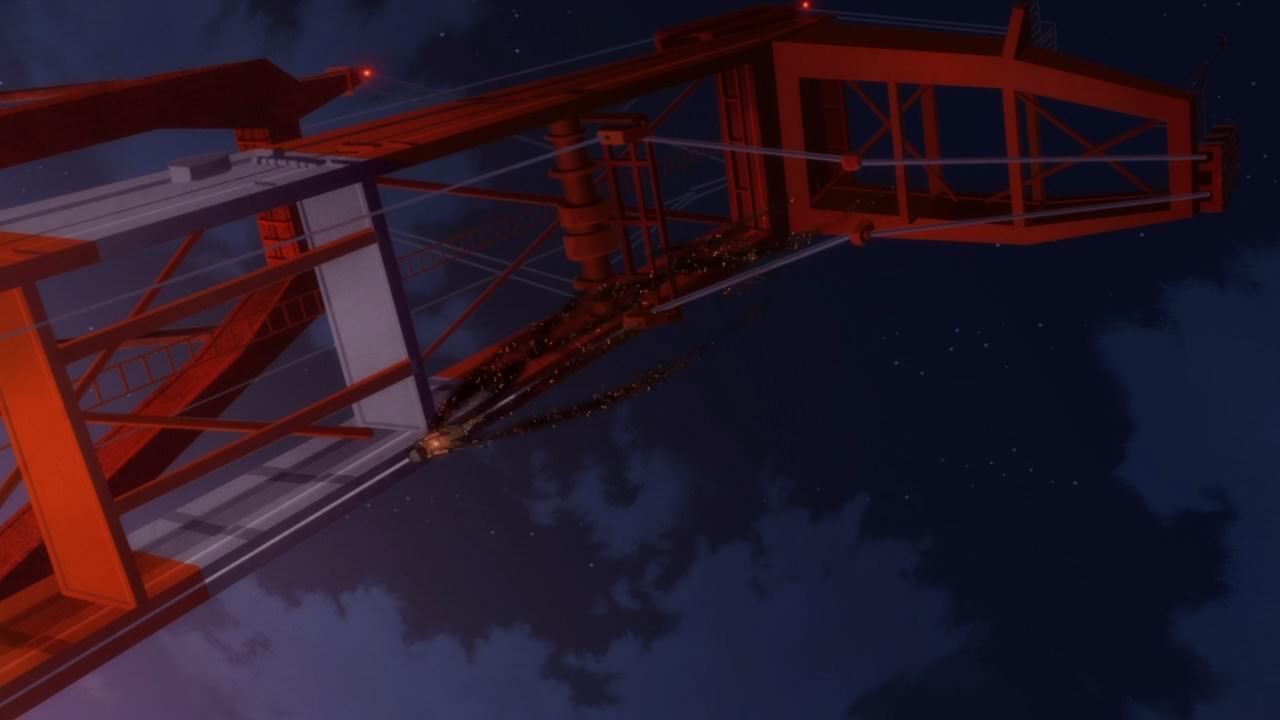 In the end, Yomi Satsuki died as she fell down from the crane tower. We’ll sure gonna miss her together with Yume Tsubakuro. 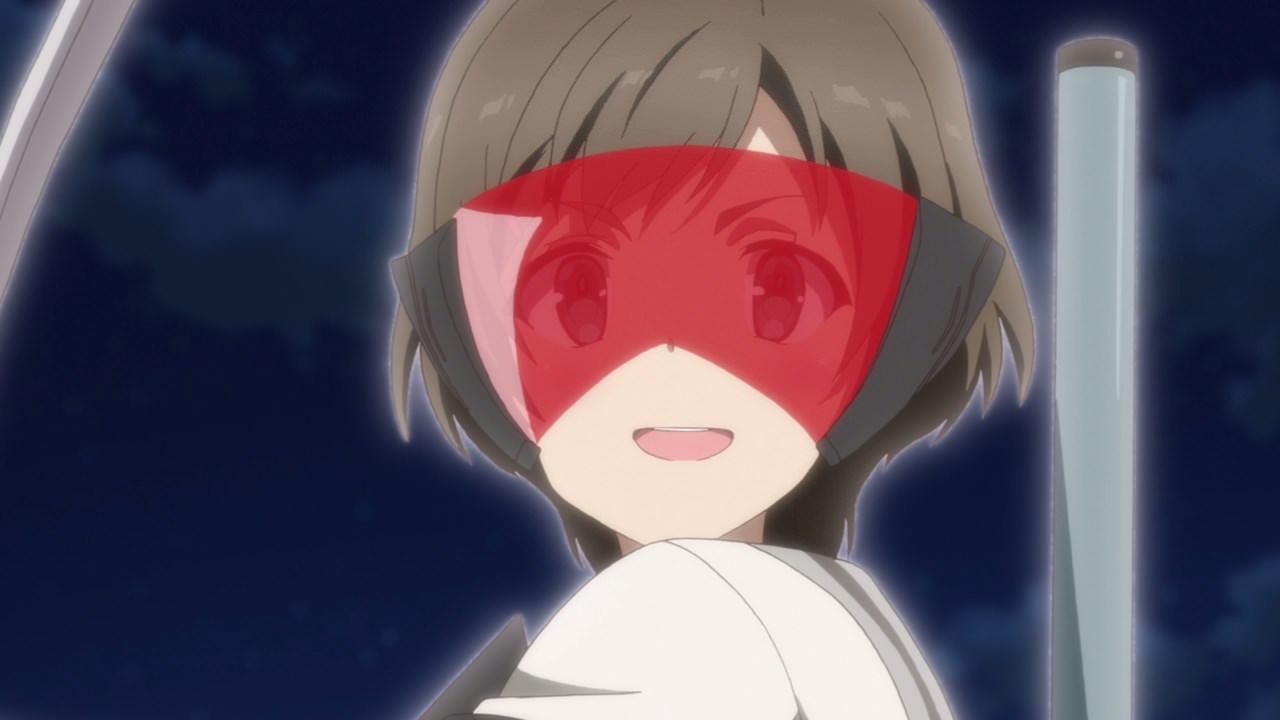 Now then, let’s move onto Round 2 between Ayumu Uchizato and Kanami Etou as Ayumu told her idol that she got stronger thanks to Yukina Takatsu’s enhancements.

Then again, it’s not really her true strength as injecting noro through her body not only makes her powerful, but it makes Uchizato very insane. 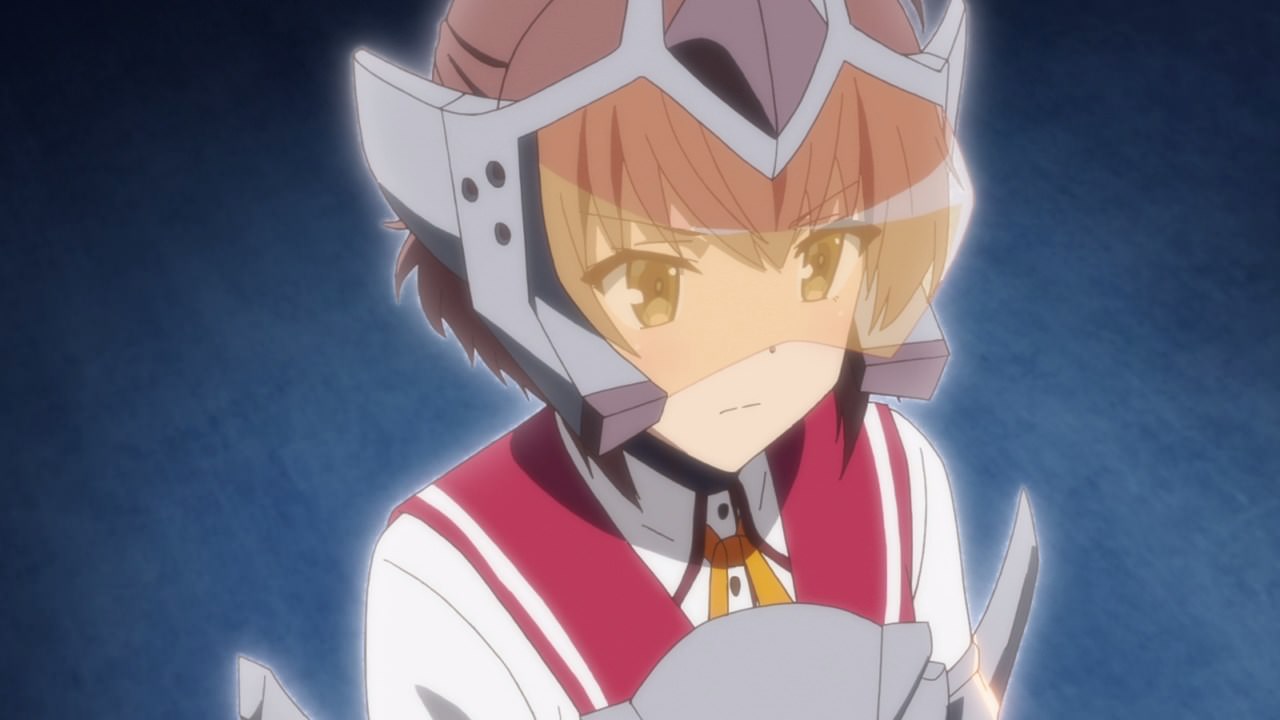 Heck, even Kanami Etou knows about it. Damn, it was a wasted potential for Ayumu Uchizato to become a deranged enemy instead of an ally to Kanami Etou. 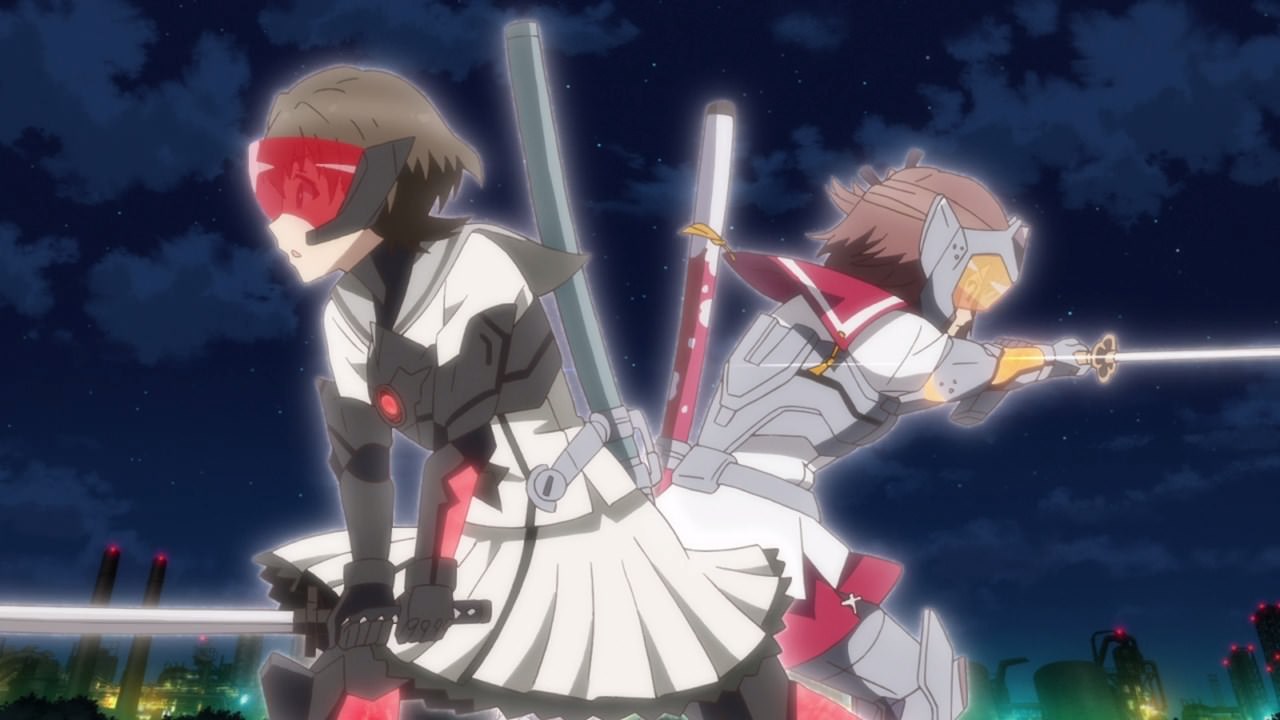 Therefore, it’s time for Kanami to defeat Ayumu with a single stroke. It goes to show that you get stronger naturally by training instead of going under the knife. 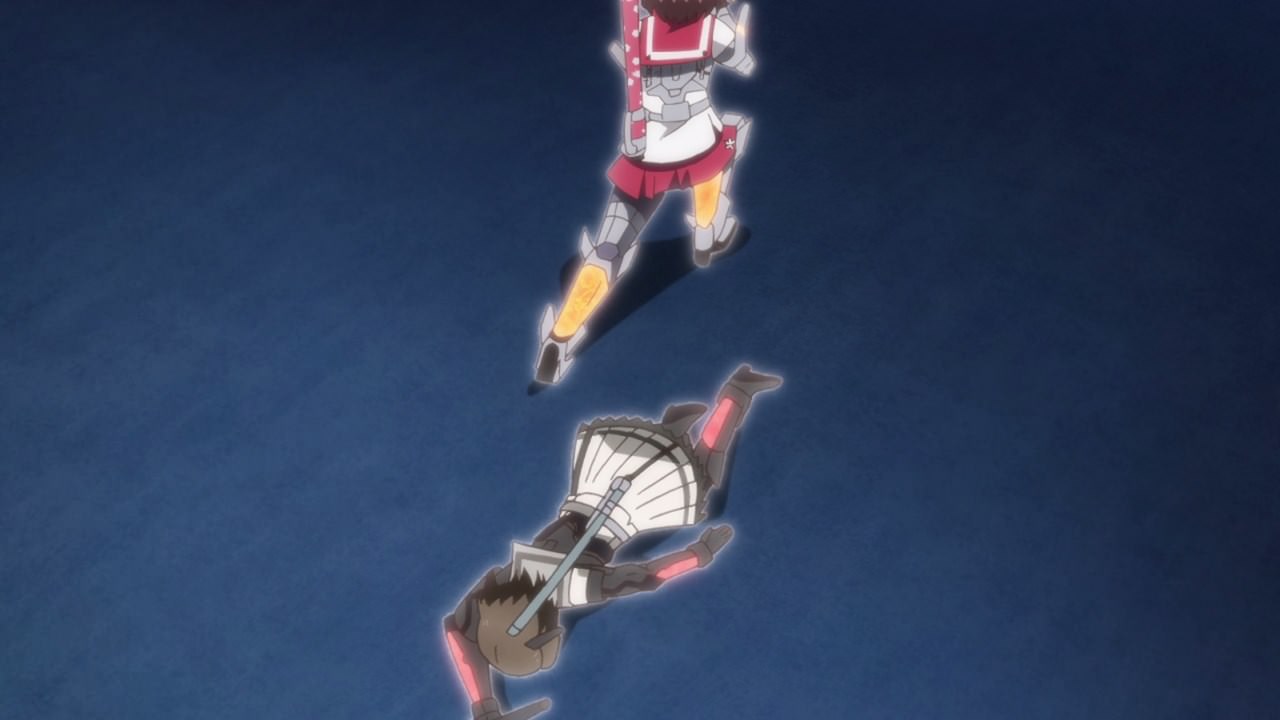 As for Uchizato, she’s not gonna die as Ayumu got knocked out. Well, glad that it’s over and now let’s move back to Yukari Origami and Princess Ichikishima. 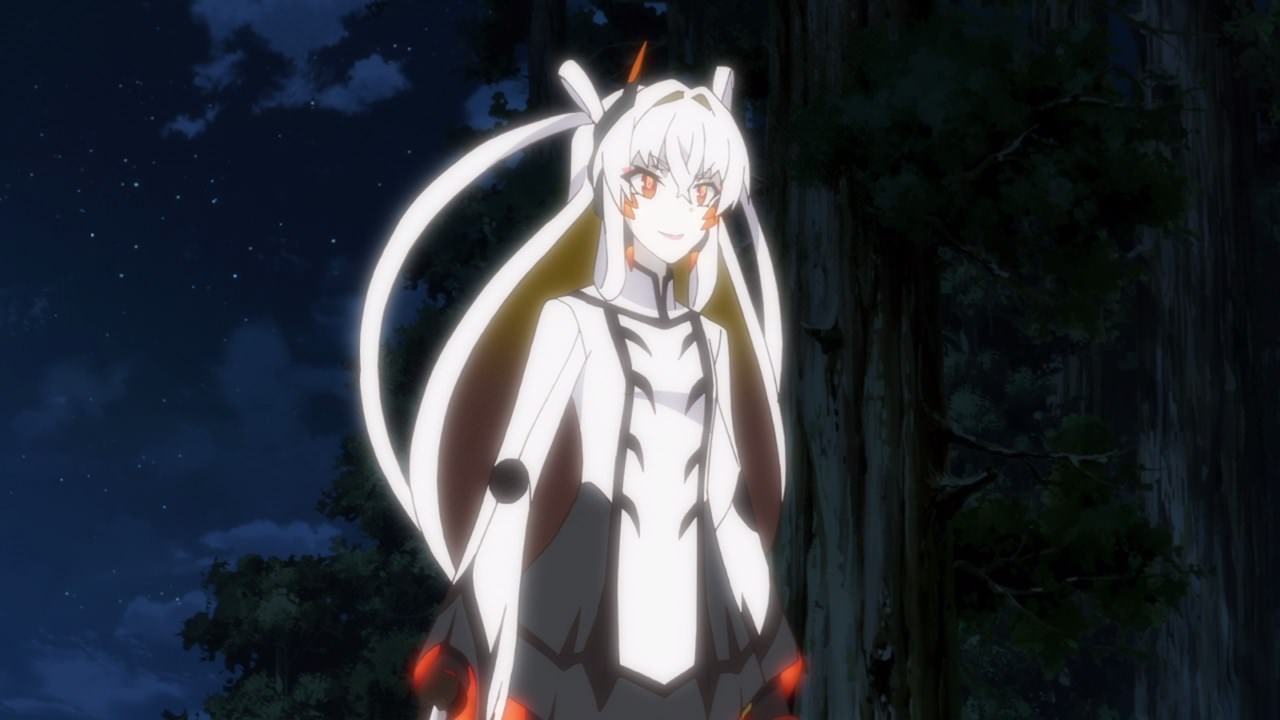 Sadly, they bump onto Princess Tagitsu as she wants to take Princess Ichikishima and absorb her in order to achieve her perfect form. 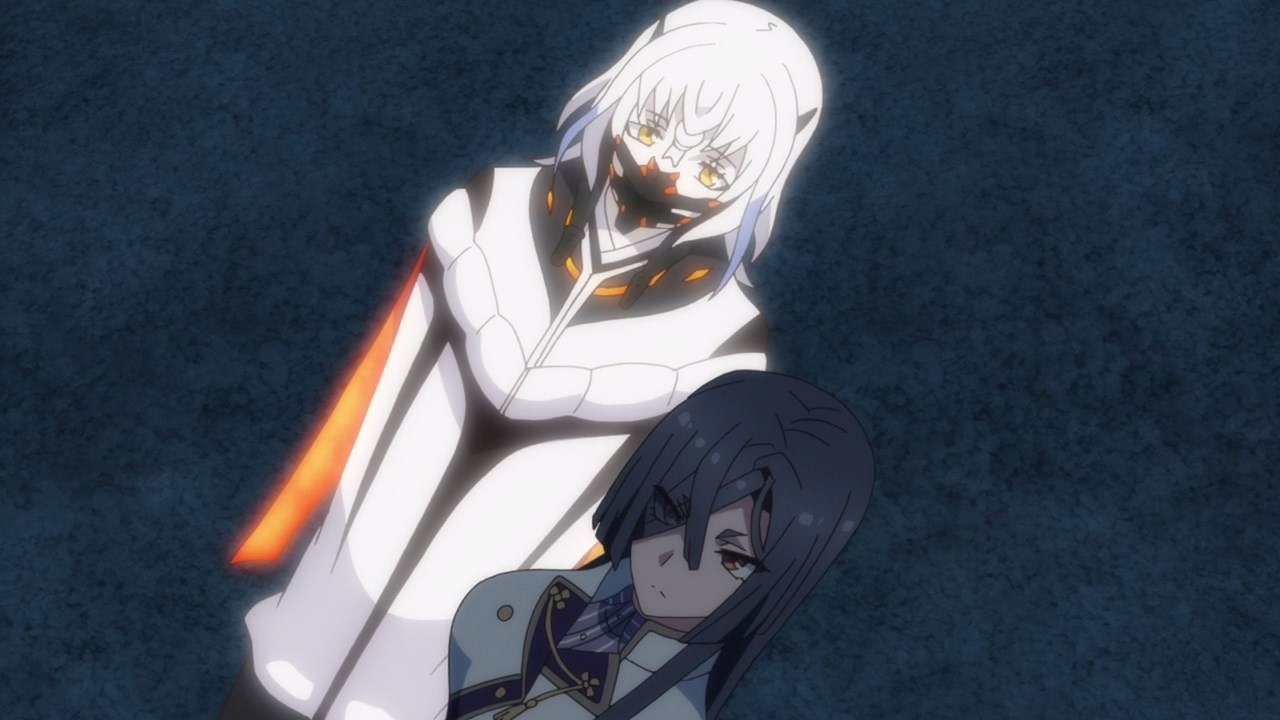 Not by a long shot though as Yukari-sama promised to Princess Ichikishima that she’ll protect her at all cost. I must say that it was a bold proclamation from the former head of the Origami family! 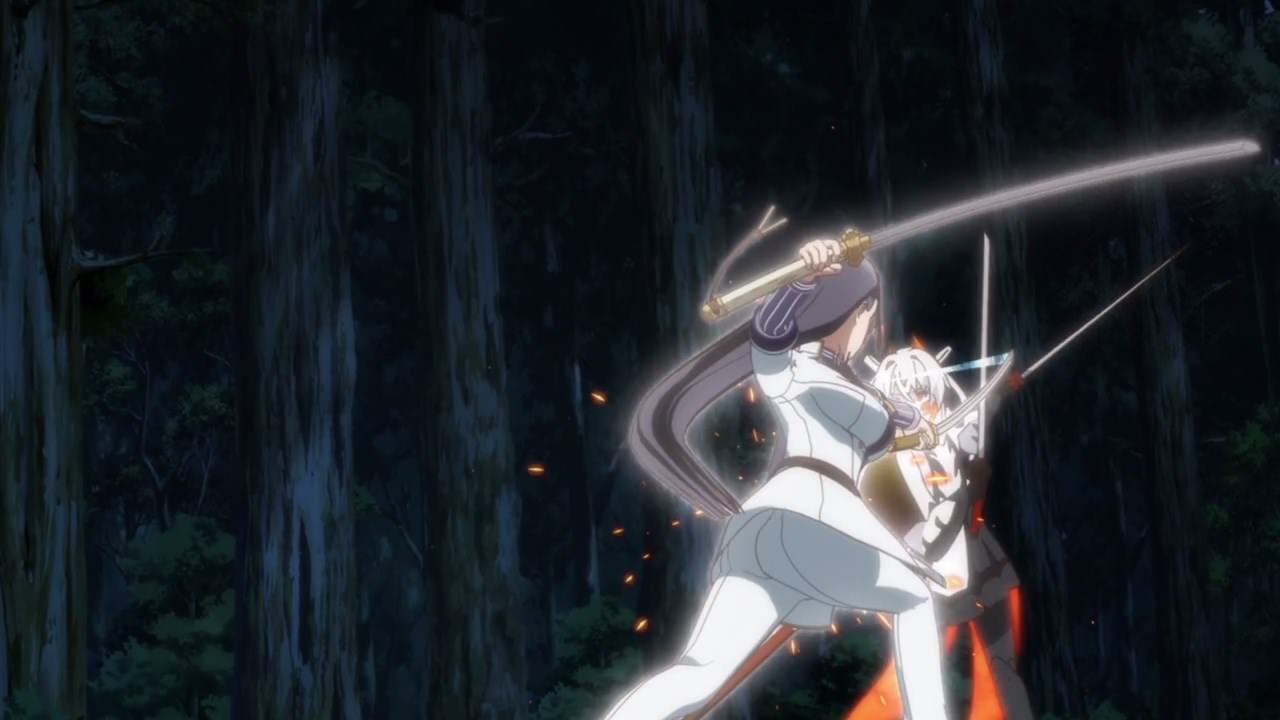 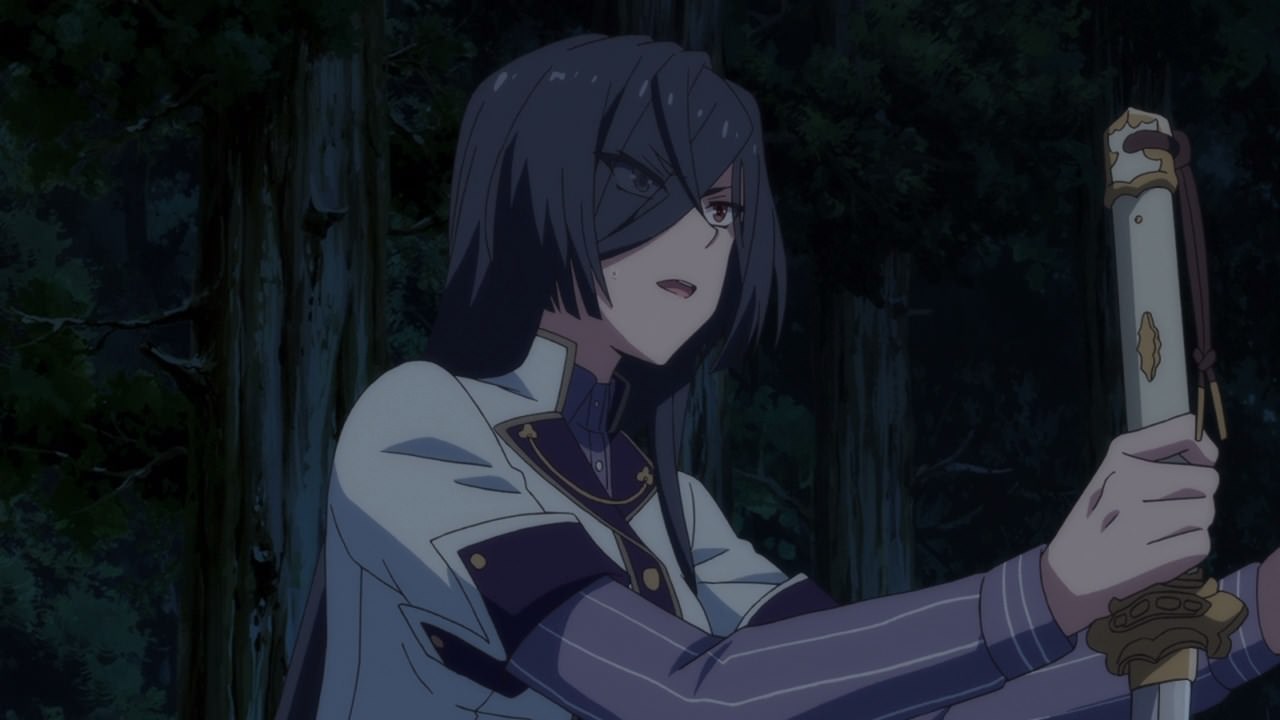 And coupled with her small skirmishes against the Ayanokouji students, seems that Yukari-sama is very tired that it gives Princess Tagitsu the opportunity to kill her on the spot. 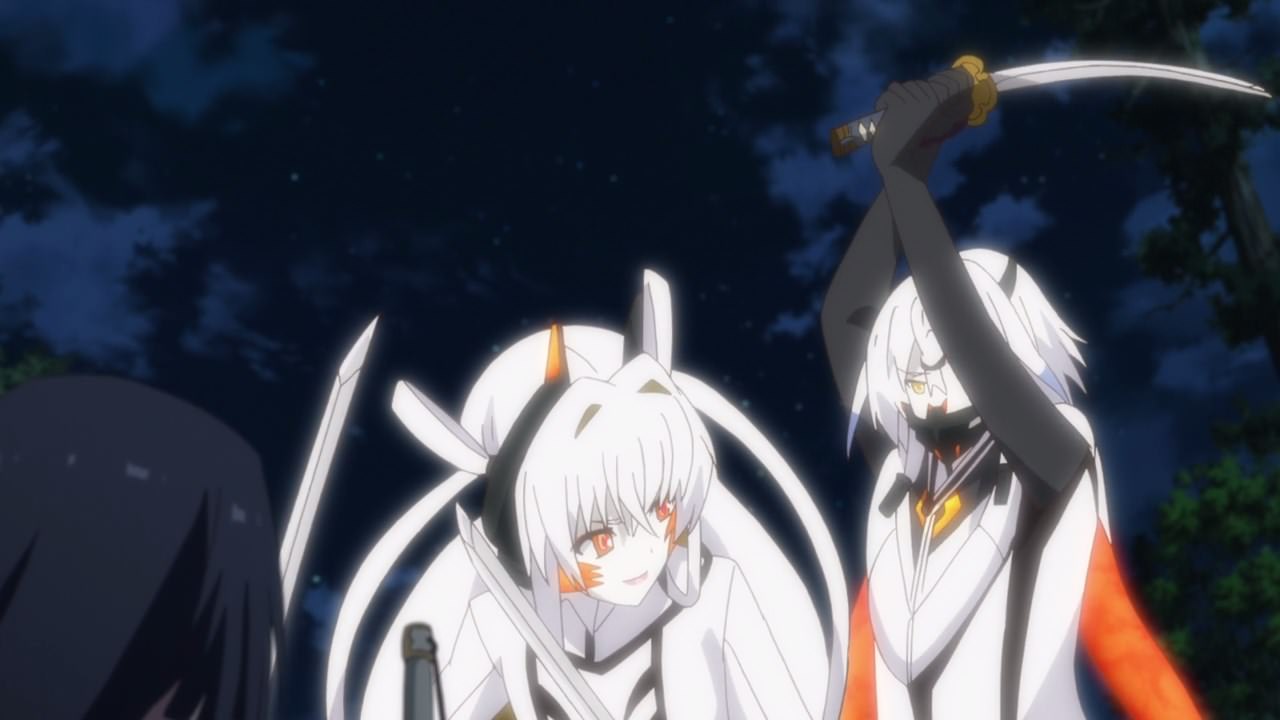 Not on Princess Ichikishima’s watch though as she went in to defend Yukari-sama from Princess Tagitsu. I’m surprised that Ichikishima can put up a fight. 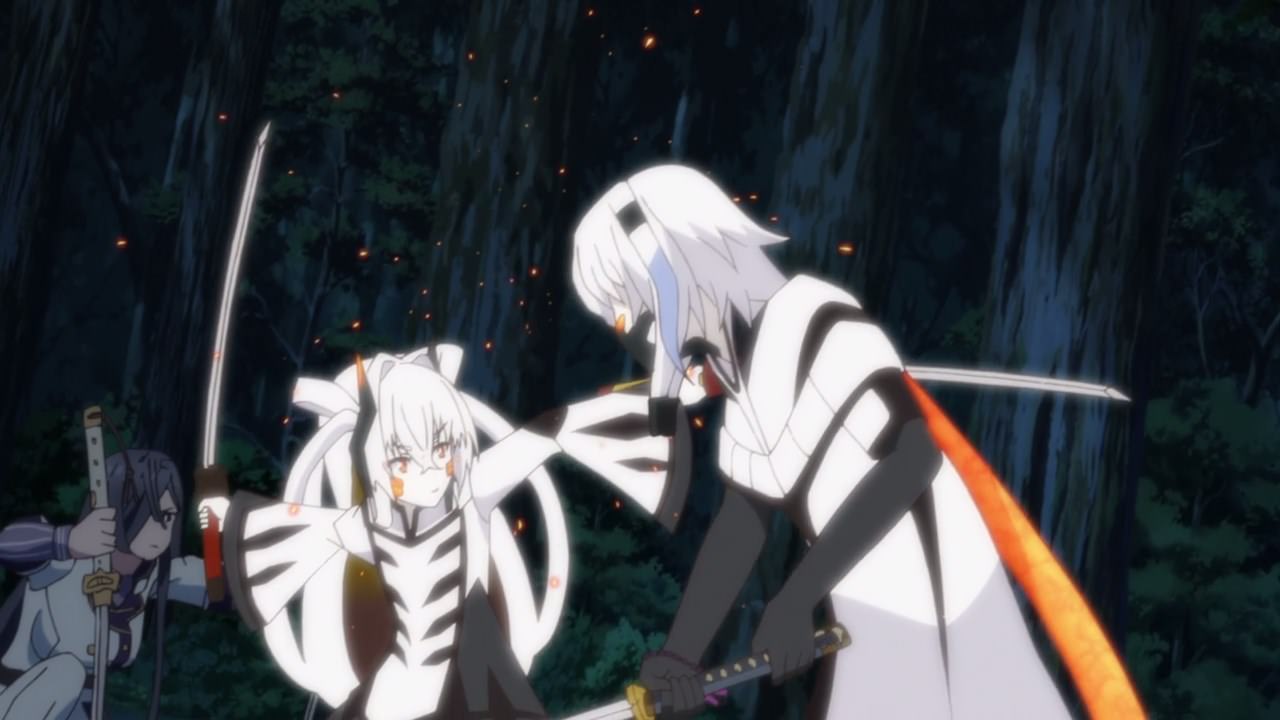 Then again, Princess Ichikishima doesn’t want to get absorbed by Princess Tagitsu so she decides to run away and find some help right after parrying Tagitsu’s attacks. 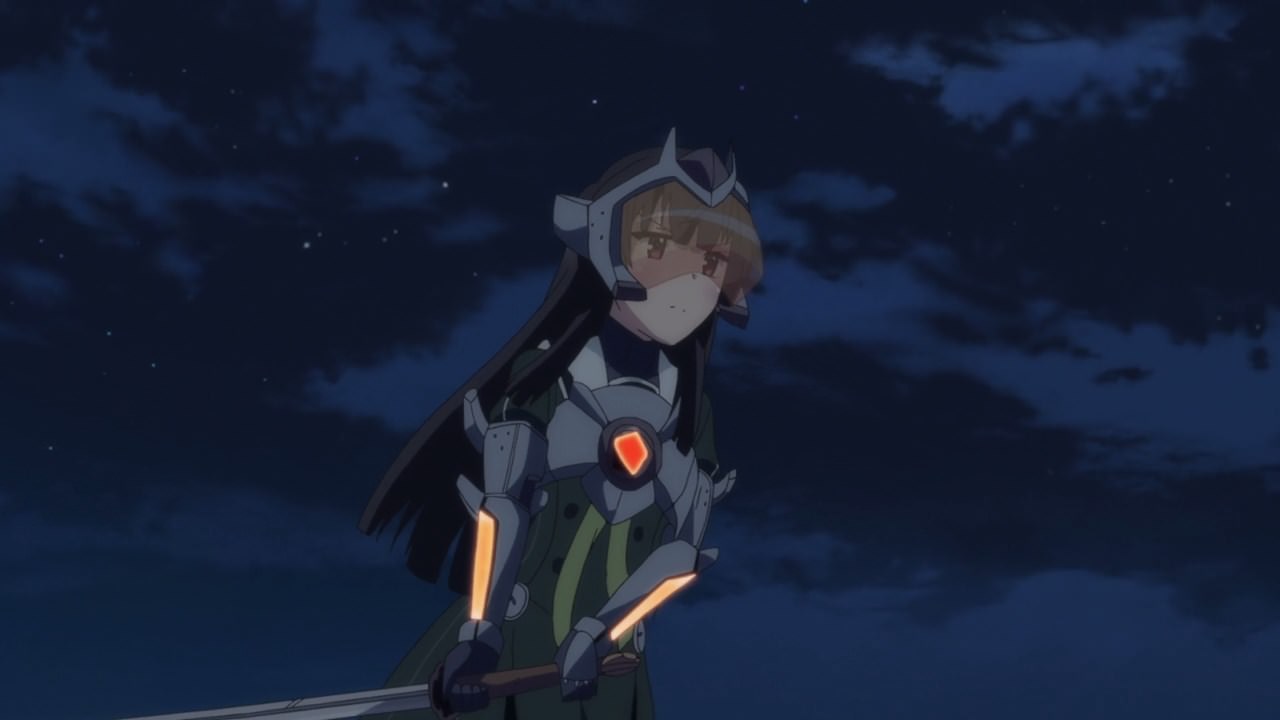 Now let’s go back to Hiyori Juujou as she’s finding Yukari Origami. Well, it was Ayumu Uchizato and her toji mates from Ayanokouji Martial Arts School who are at fault for blocking her way. 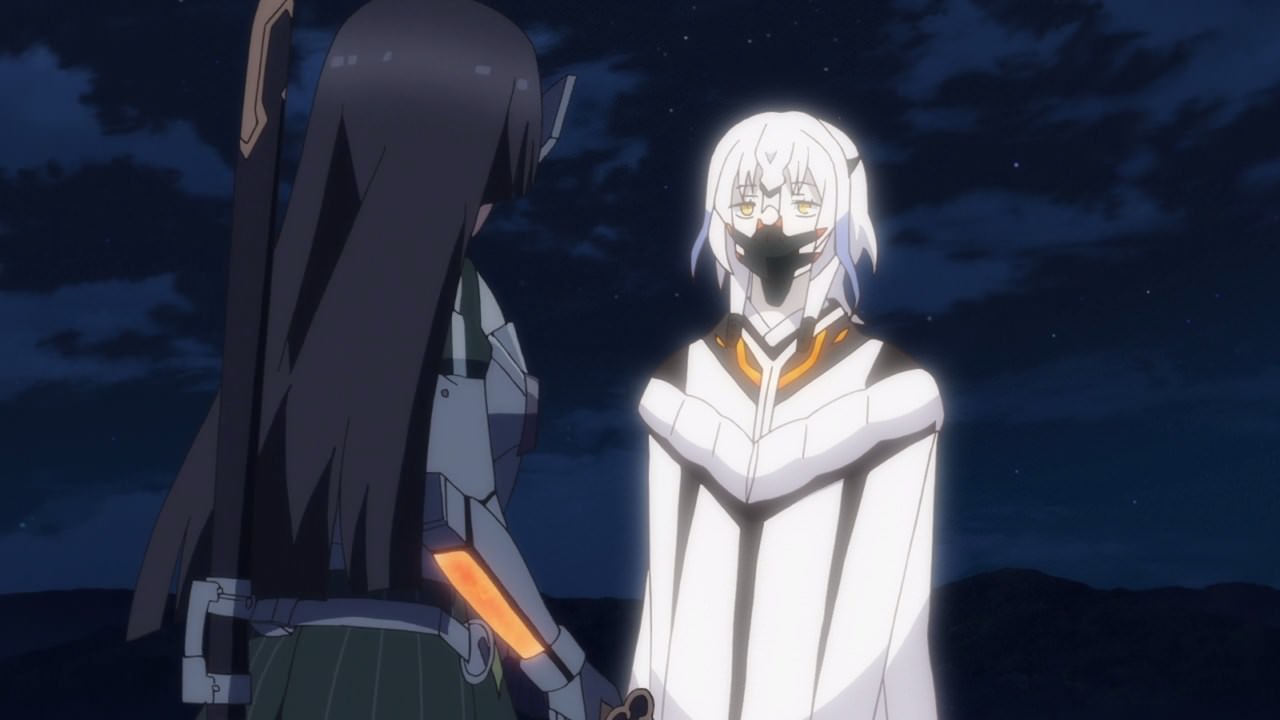 Sure that Hiyori Juujou will come to Yukari-sama’s aid, but Princess Tagitsu is stronger than her. 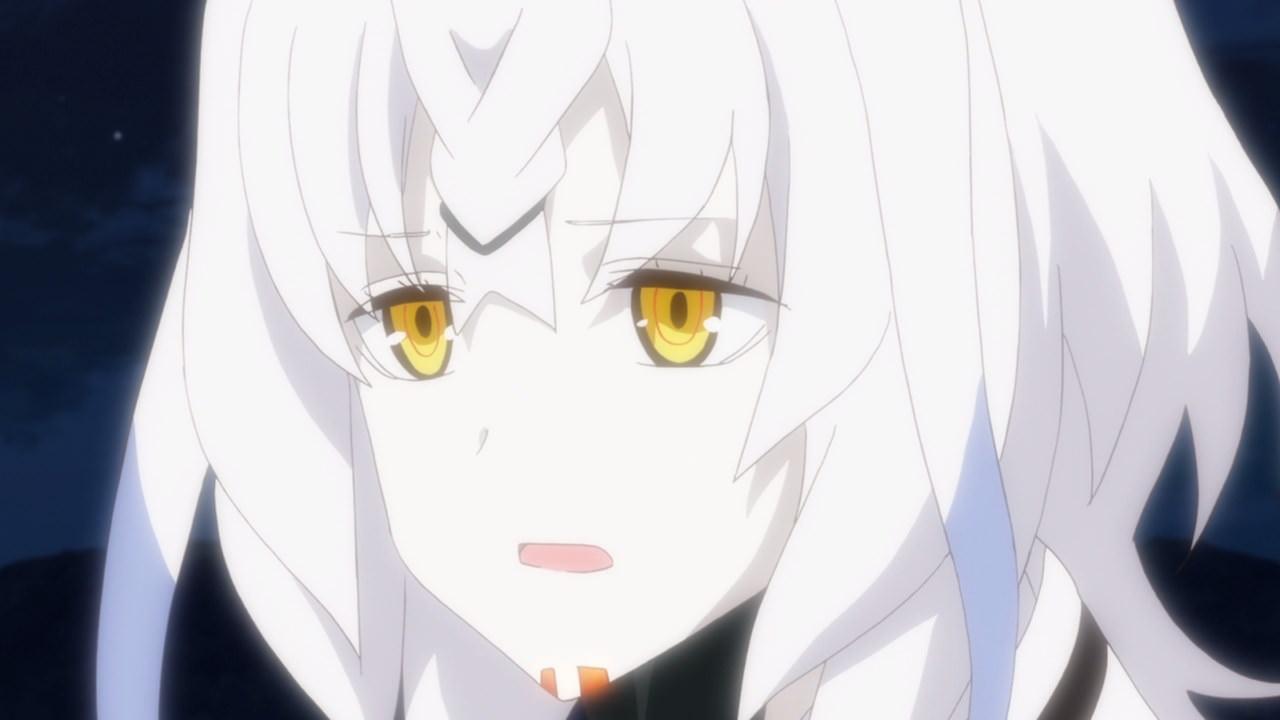 So, the only way to rescue Yukari Origami is for Princess Ichikishima to fuse with Hiyori Juujou. Oh, and she’s serious as Ichikishima took off her mask.

Of course, the question is whether Hiyori will take Princess Ichikishima’s offer or not since she still has a slight grudge against Princess Tagitsu. I mean, her mother died because of a botched attempt to seal the great aratama away. 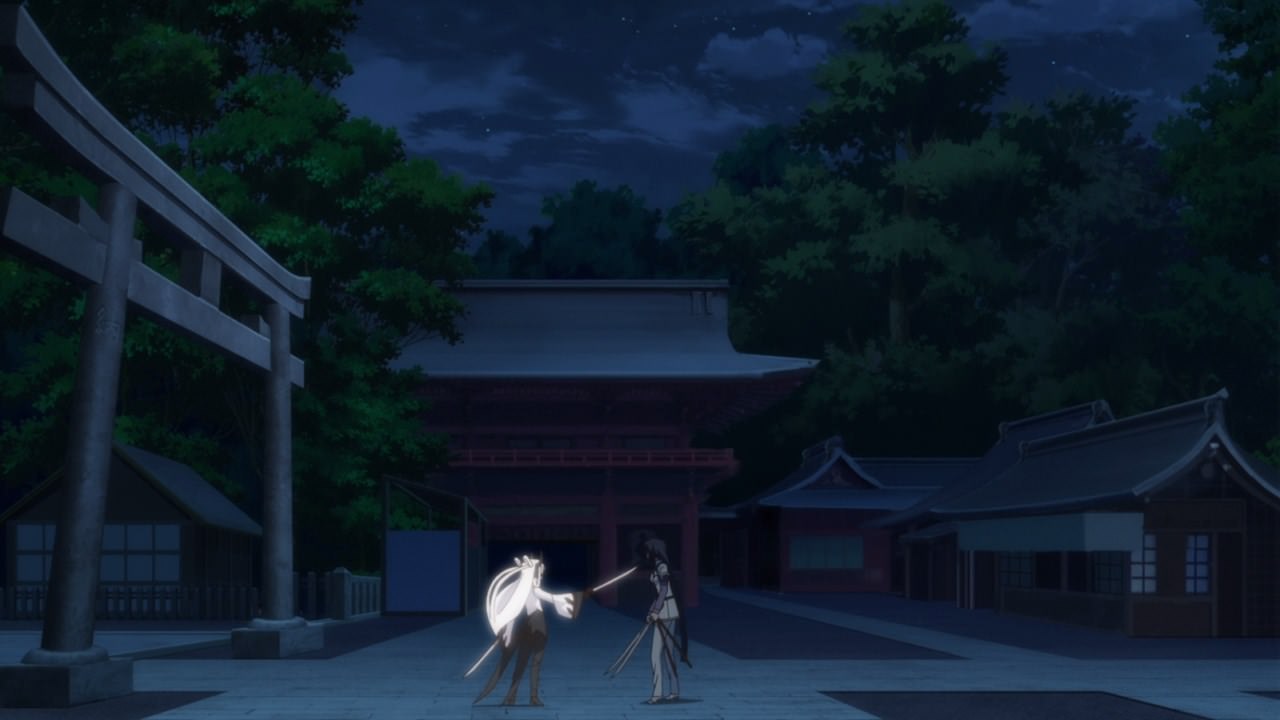 Meanwhile, it seems that Yukari Origami has been cornered as Princess Tagitsu is about to defeat her at this shrine. Oh boy, I can’t bear to watch this! 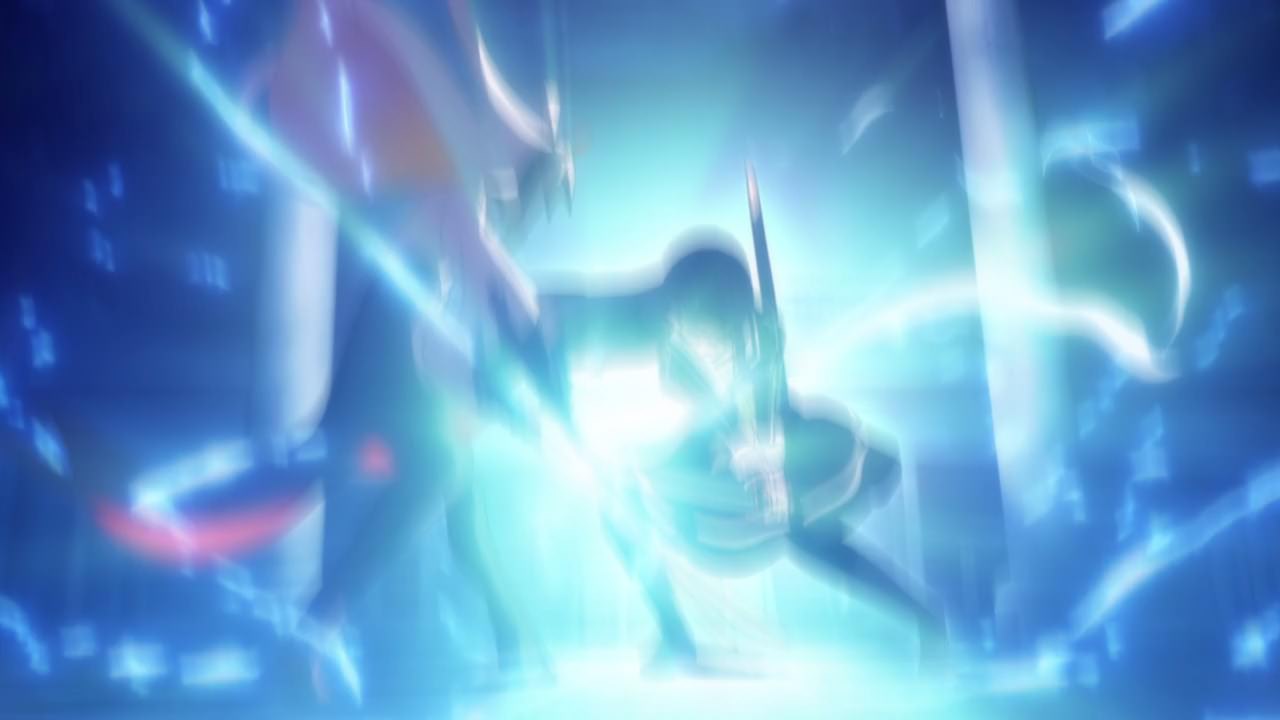 Suddenly, Princess Tagitsu was startled when a certain Hiyori Juujou made a surprise attack on her. Come to think of it, Hiyori is a bit different than usual. 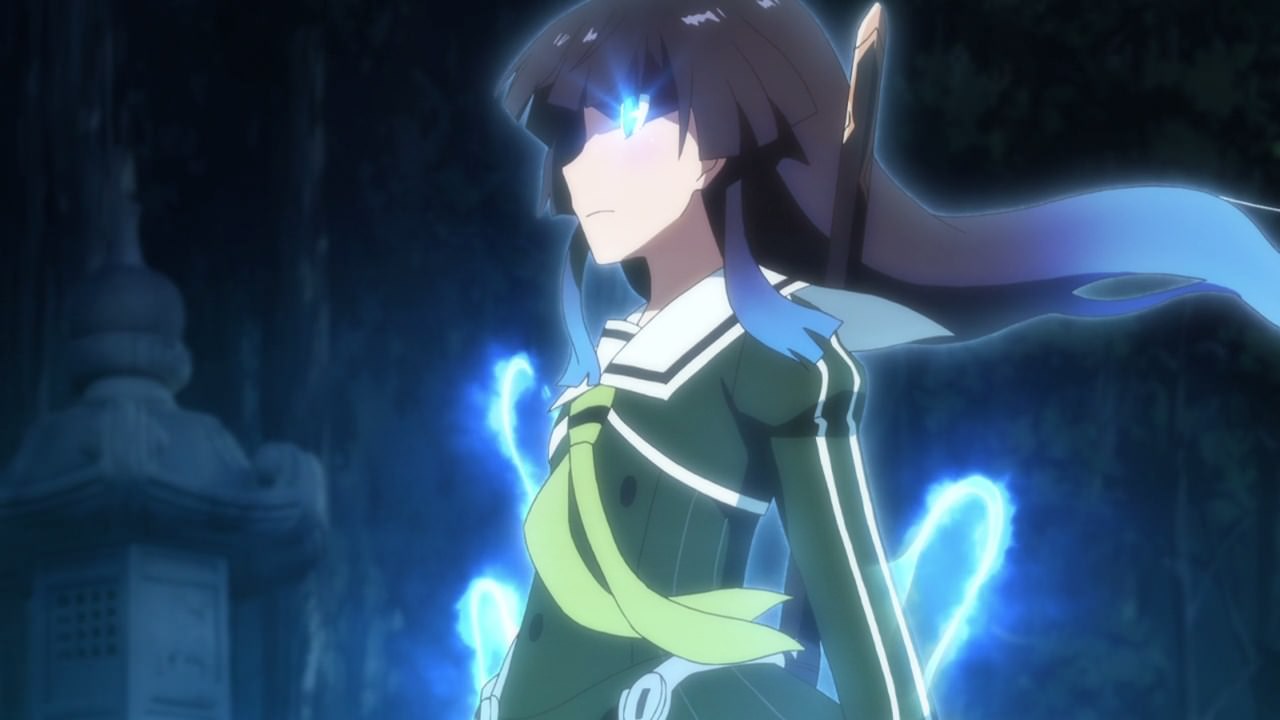 It turns out that Hiyori Juujou has fused with Princess Ichikishima in order to become stronger. What the fudge, she’s not even the main character of this anime series!? Oh wait, Hiyori is one half of the protagonist of Toji no Miko together with Kanami Etou.

In any case, what a surprising turn of events during the last portion of this week’s episode. Still, I’m worried that it’s not enough to defeat Princess Tagitsu. Worse, she might even suck Hiyori’s new powers onto herself. Who knows what will happen next time…