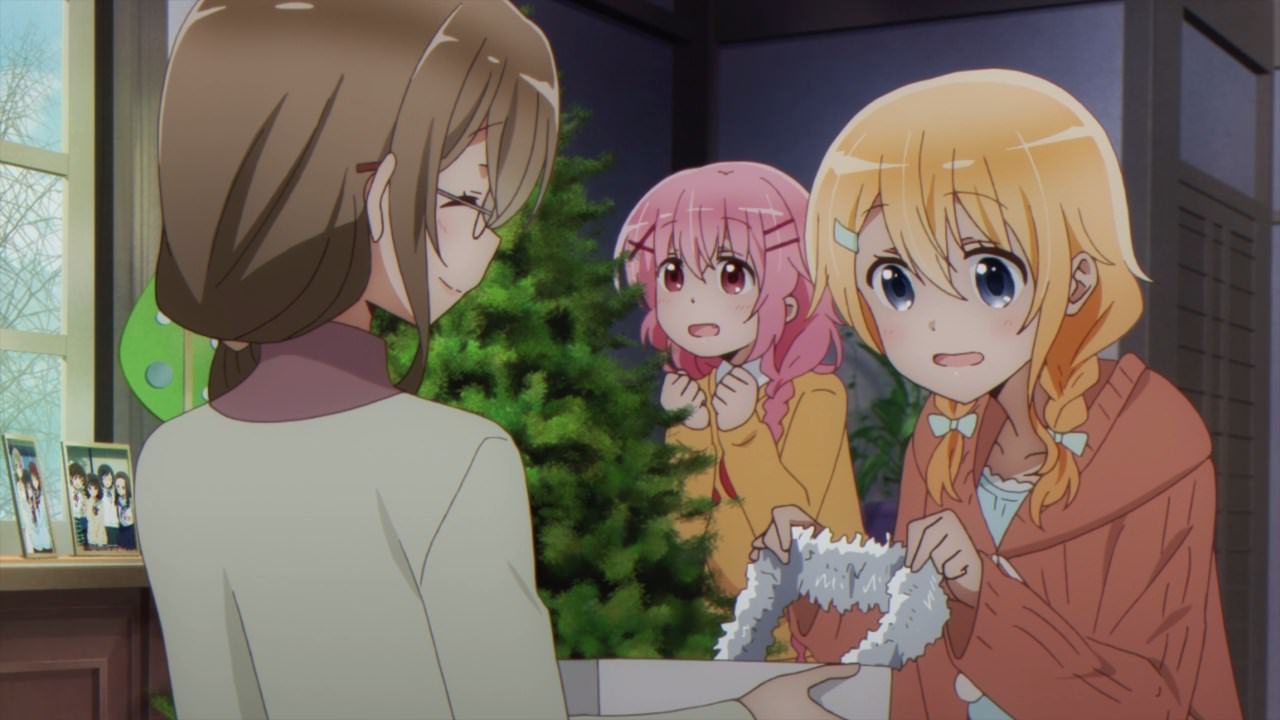 Christmas is here in Comic Girls where Ririka Hanazono gave Kaoruko Moeta and Koyume Koizuka some decorations and a tree. C’mon, this is the season to be jolly!

Of course, there’s one person who’s not keen on celebrating Christmas. No, it’s not Tsubasa Katsuki… 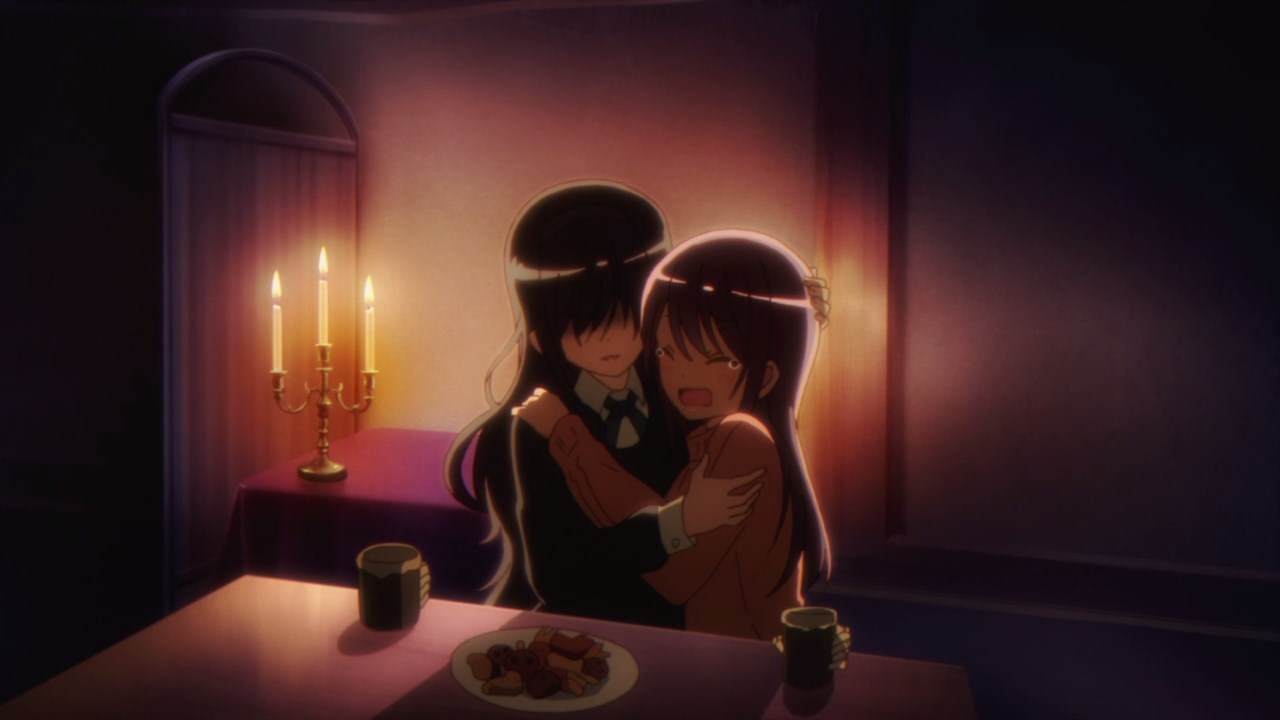 But rather, it’s Ruki Irokawa as she hates Christmas that Rukki spends her time with Suzu Fuura.

Why she hates Christmas? Well, Christmas is the day where couples make out all day long, and Ruki Irokawa couldn’t think of a story on her teens’ love manga as she didn’t got a boyfriend. Um, you should have a date with Tsu-chan!

You know what, there’s another way to celebrate Christmas (or Christmas Eve) for Rukki… 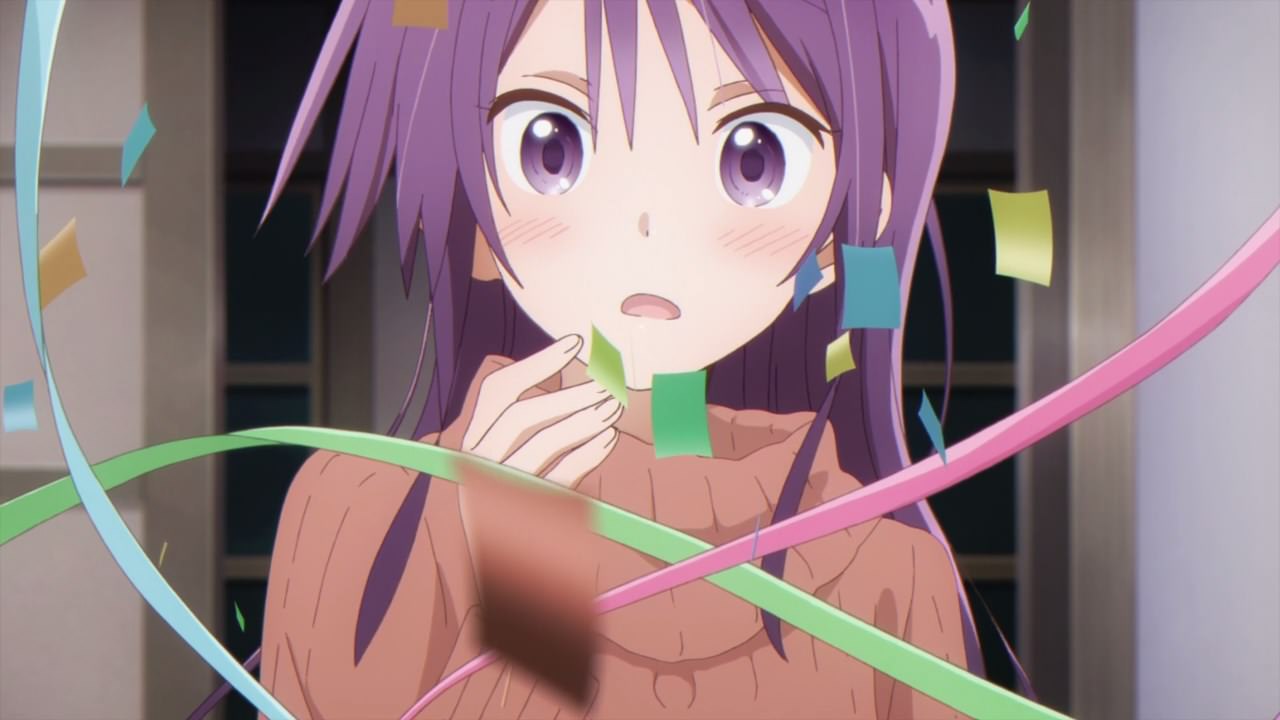 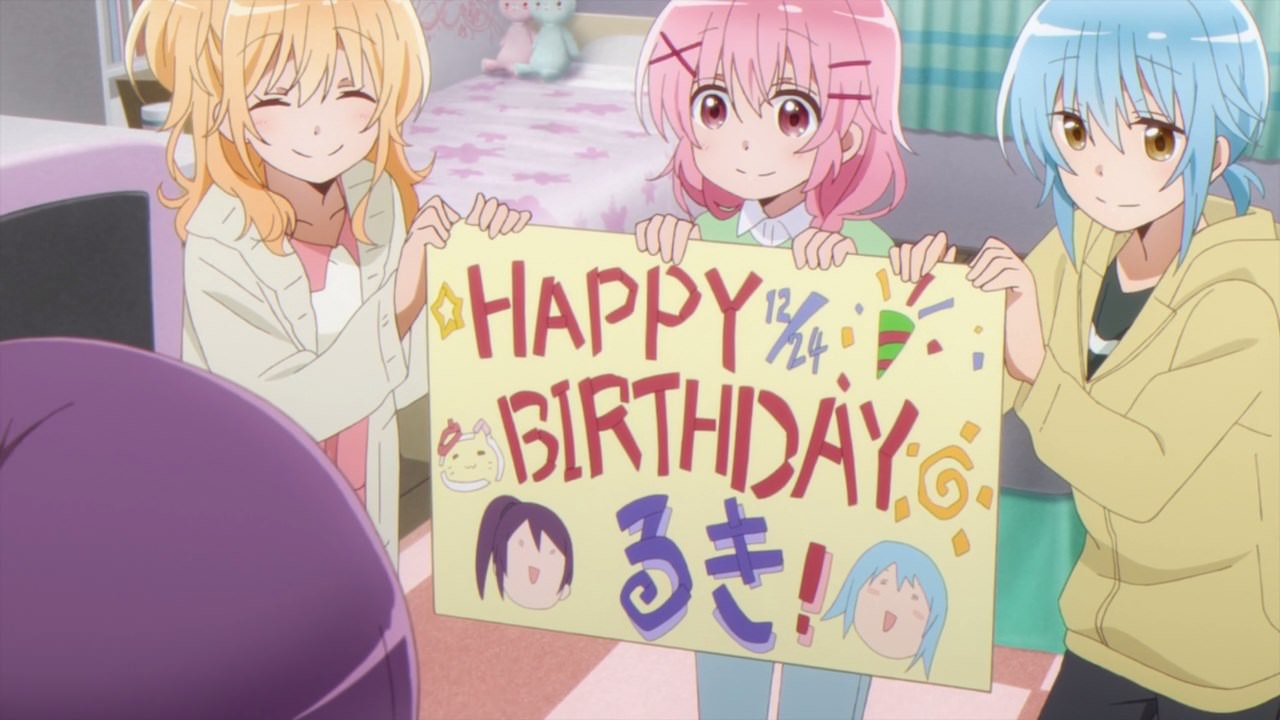 …as it turns out that she’s having a birthday party together with her fellow mangaka at the dormitory.

Well Ruki Irokawa, I hope that you enjoy your time on this special occasion with your friends! 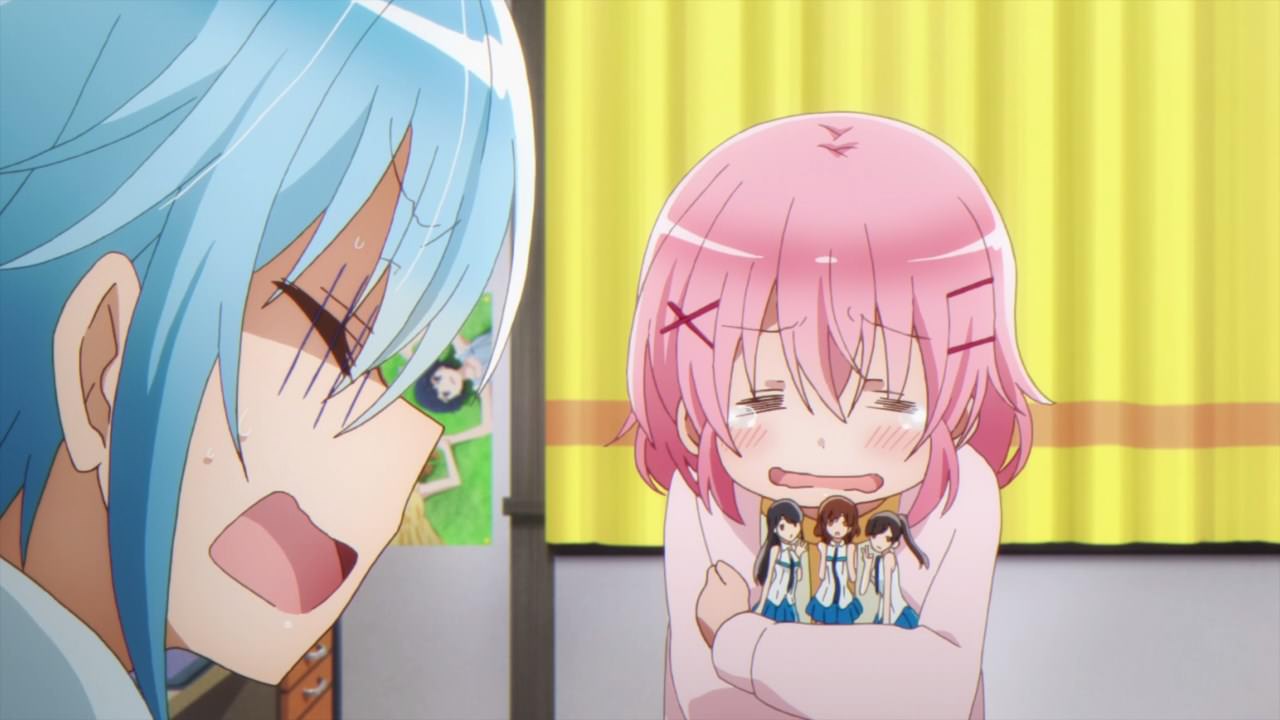 After Christmas, it’s time for their winter break. Sadly, Kaos-chan won’t go back home to her parents as they went to Hawaii, leaving Kaoruko Moeta alone at the dorms.

So, Tsubasa Katsuki invited Kaos-chan to her house. Of course, she needs some preparation in order to return back home… 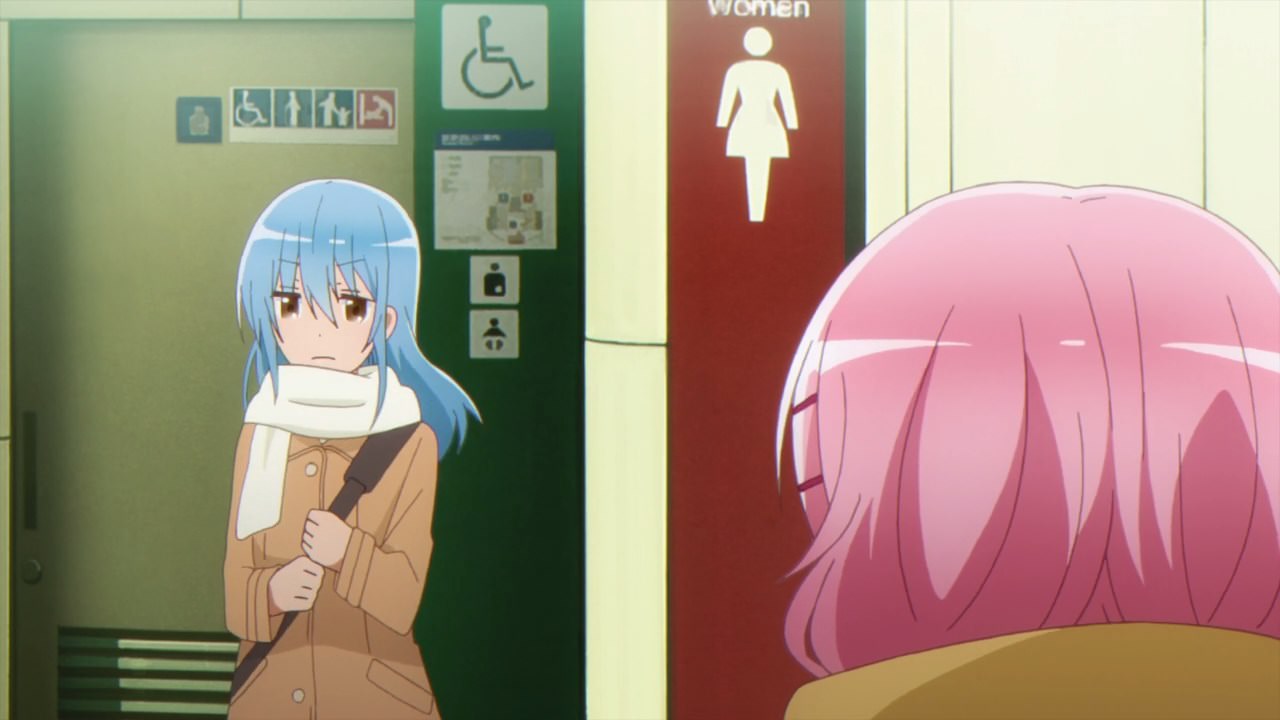 In fact, Tsu-chan needs to change her appearance like putting a wig because you see, her family is very special and you might be in for a surprise. 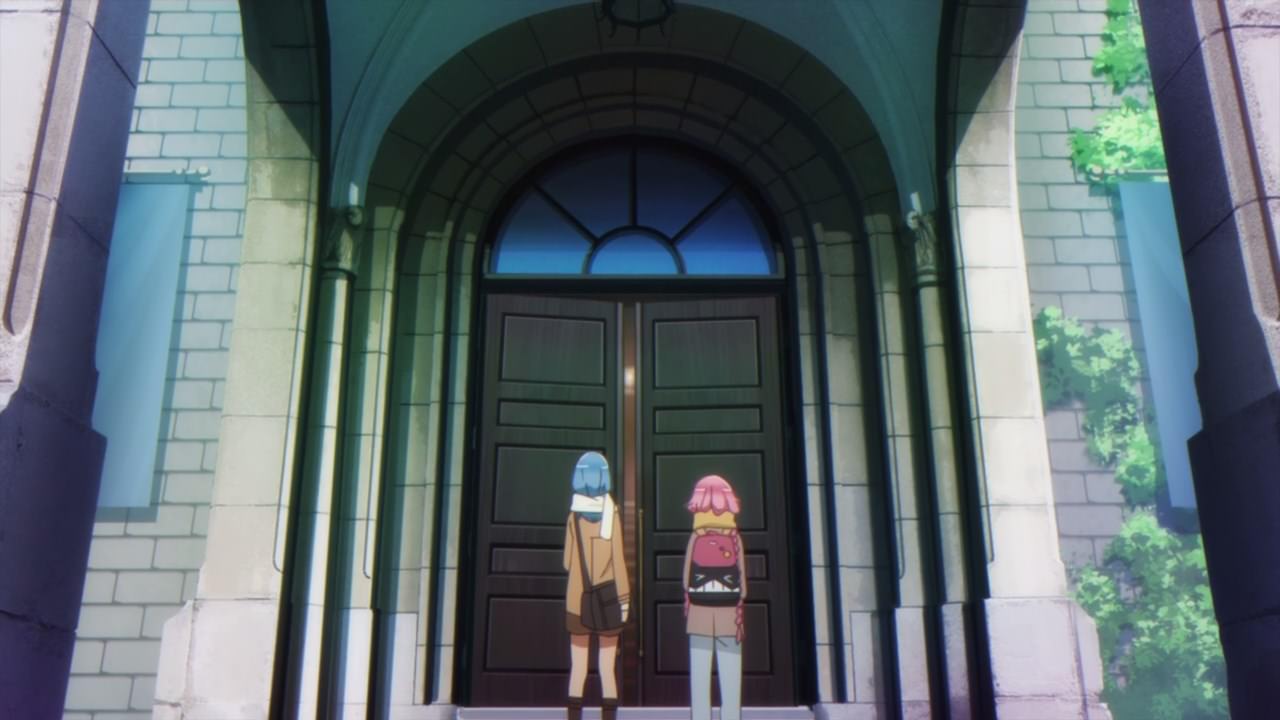 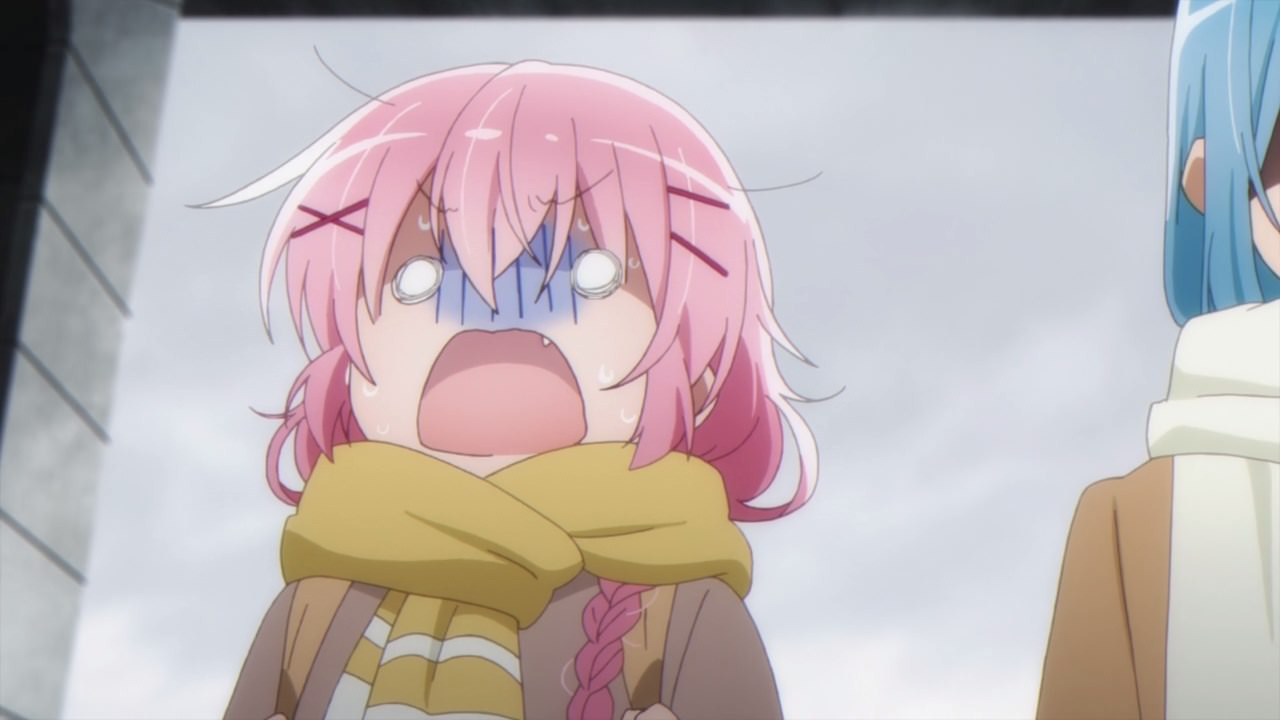 So when Tsubasa Katsuki invited Kaoruko Moeta to her house, she’s freaking surprised to see how big Tsu-chan’s house is. It’s more like a castle fit for a final boss! 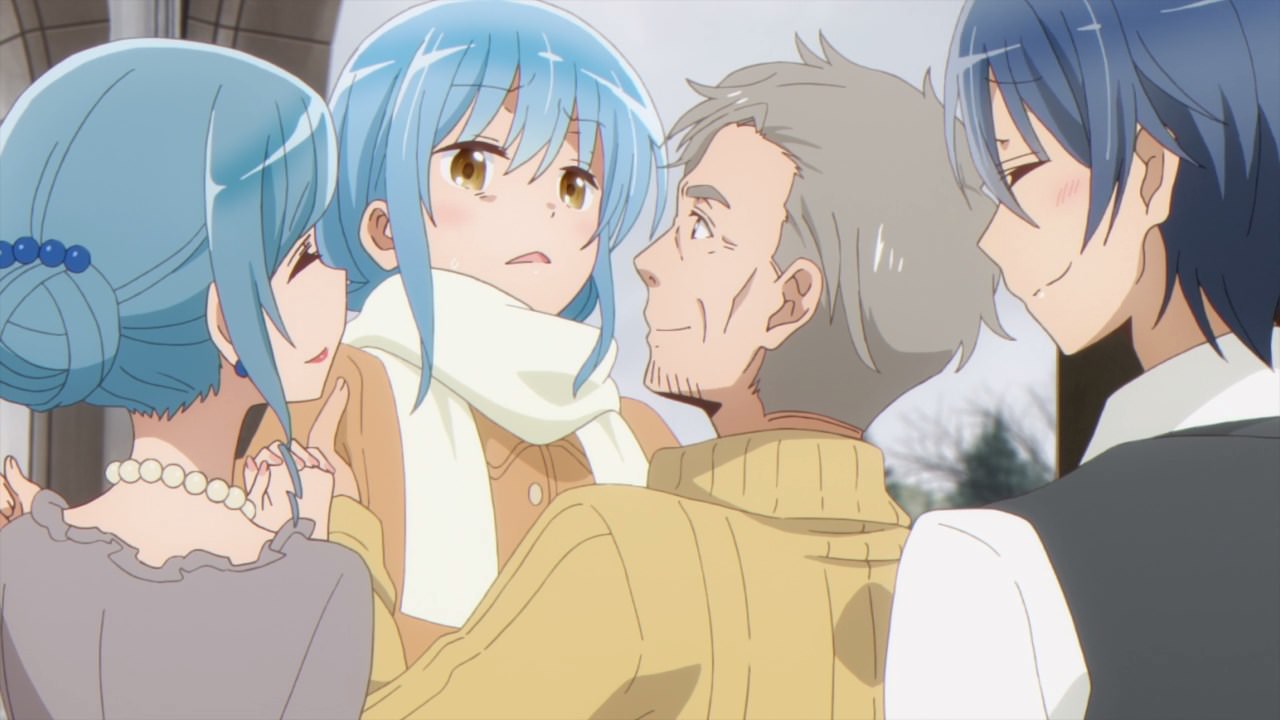 And here’s Tsubasa’s family as they’re happy to see her again after such a long time!

Heck, they’re expecting her to be the brightest student at some prestigious school, but the truth is that Tsu-chan spends her time drawing manga which she can’t tell it to her parents or even her elder brother. 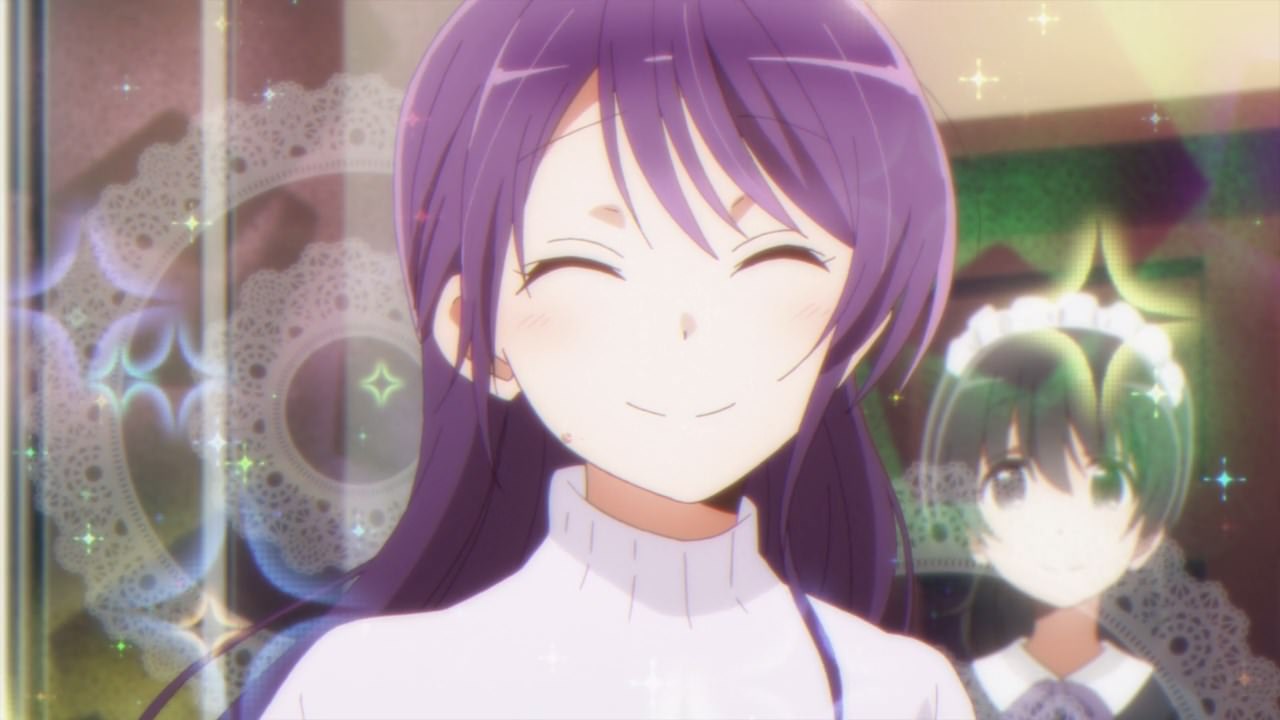 Fortunately, Ruki Irokawa has arrived to defend Tsubasa because she doesn’t want anyone to learn Tsu-chan’s secret identity as WING V. Glad that Rukki is here! 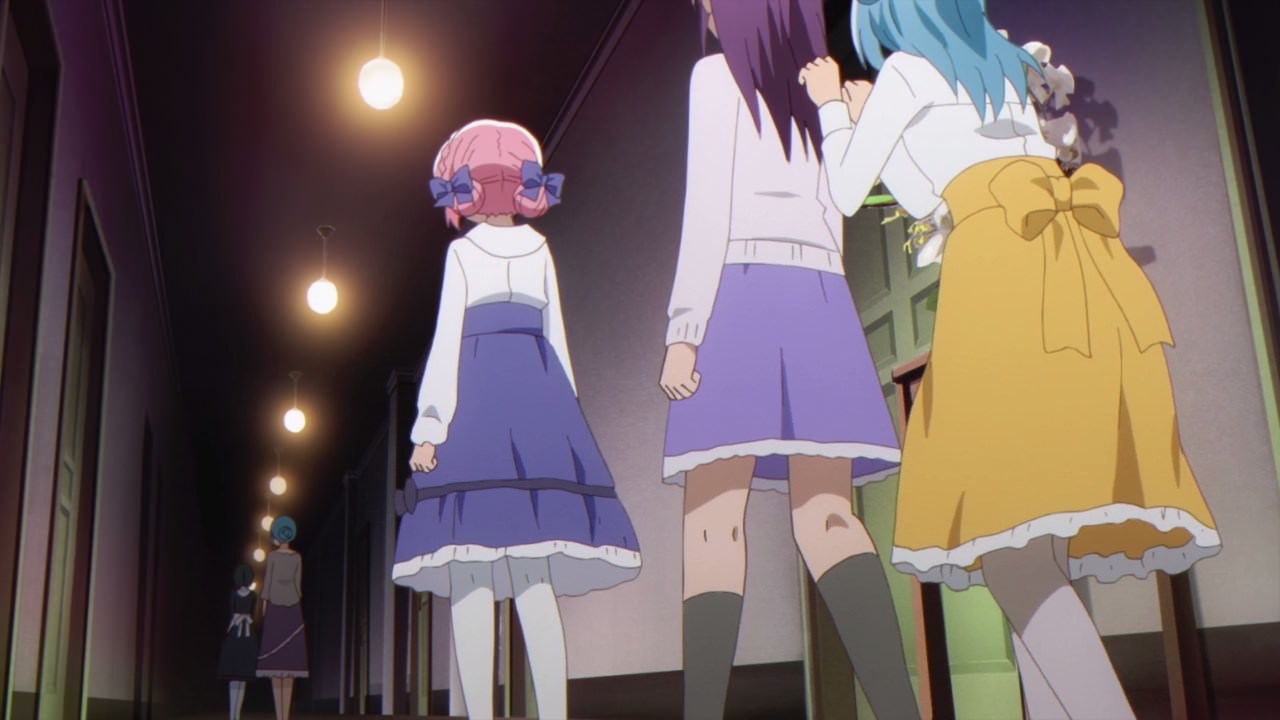 Oh, and to give you an idea of why Tsubasa is scared about her manga career being exposed? I’ll present you Mrs. Katsuki as she told her daughter that she doesn’t like Tsubasa engaging in other activities such as drawing manga. 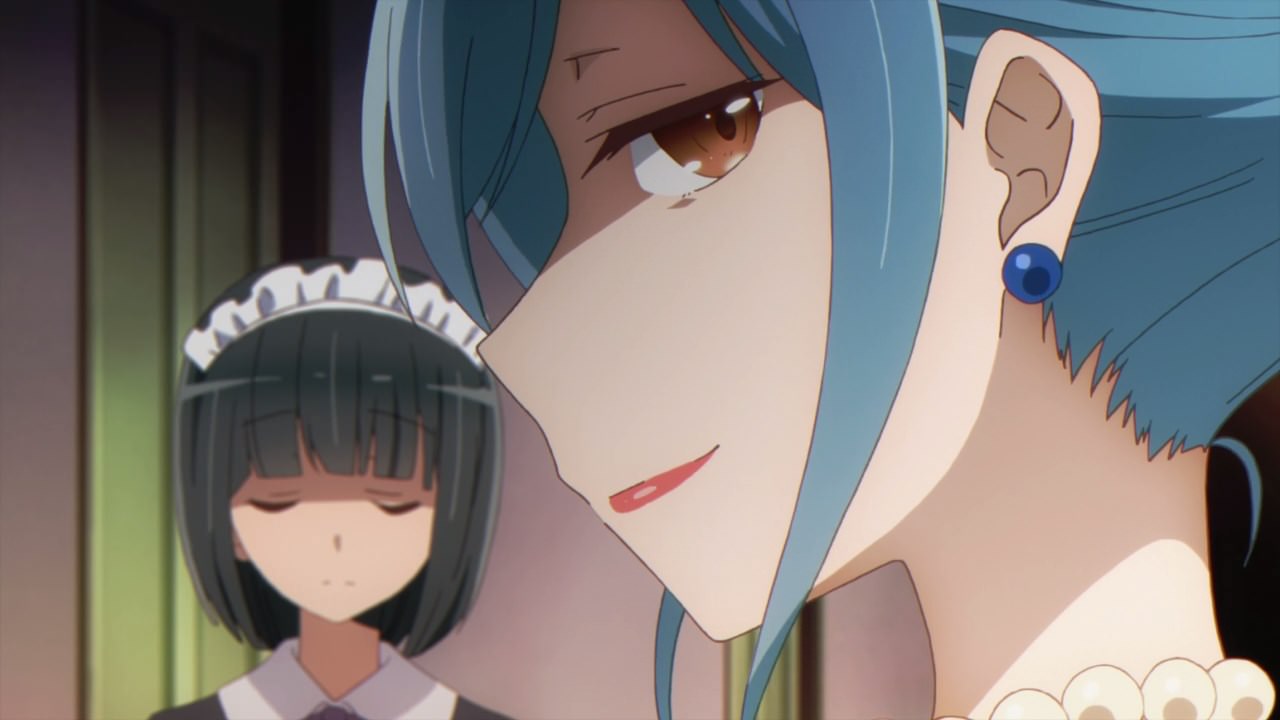 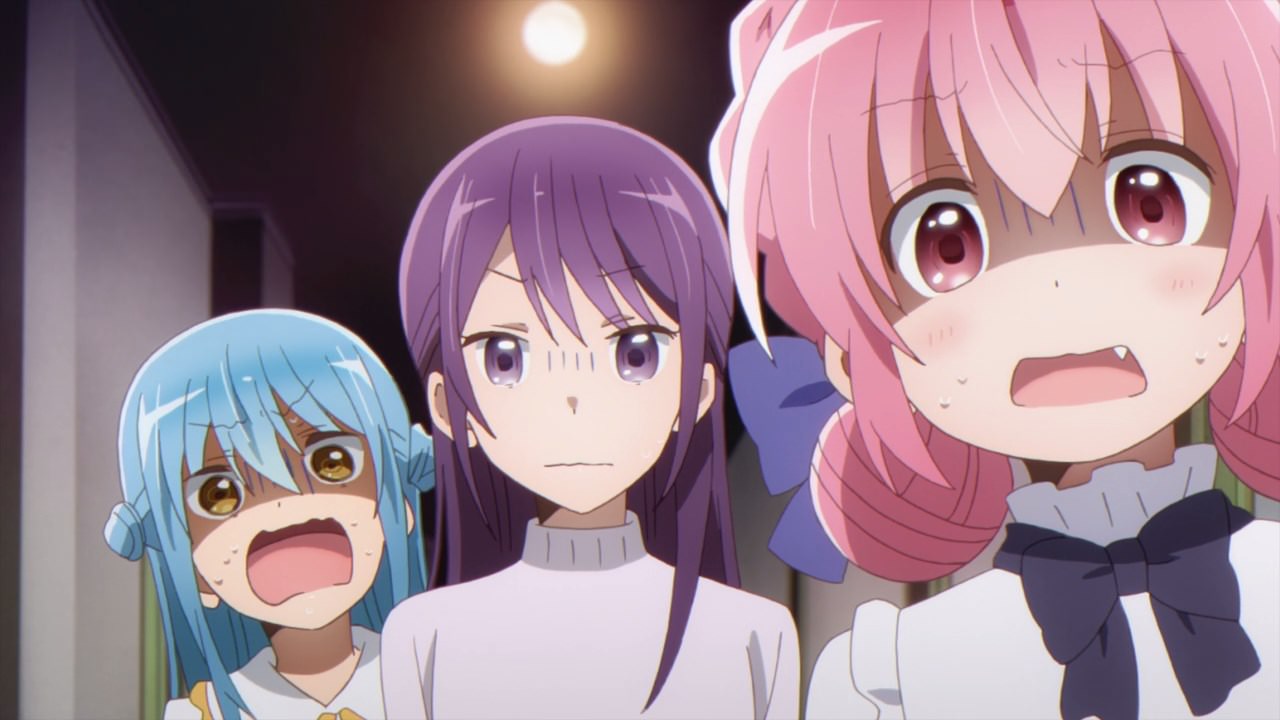 See Mrs. Katsuki’s face, you know that she’s serious about forbidding Tsubasa on joining the manga industry, even though it’s too late for that as Tsu-chan is an accomplished mangaka.

With that said, let’s hope that Tsubasa’s manga career remains a secret for eternity as she’s freakin’ scared to tell her parents about it! 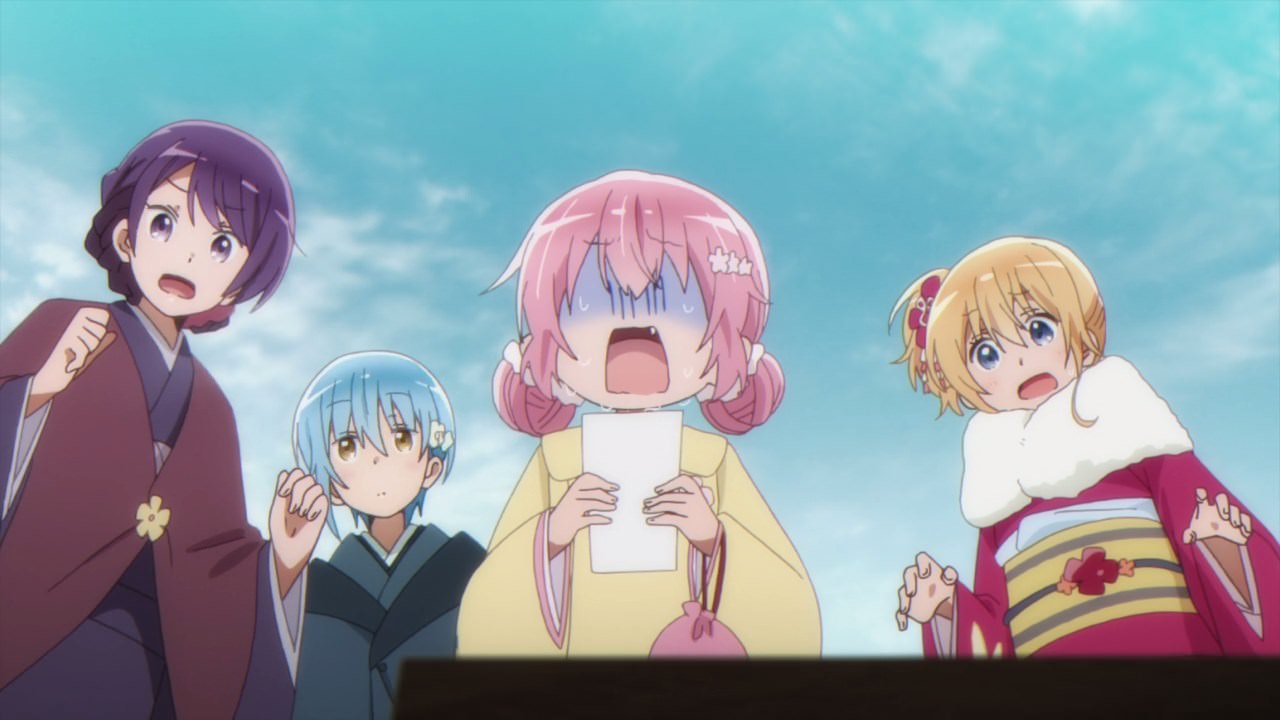 And now, it’s time for the bring in the new year as the girls are praying for their success, although Kaoruko Moeta is depressed upon getting a bad fortune. 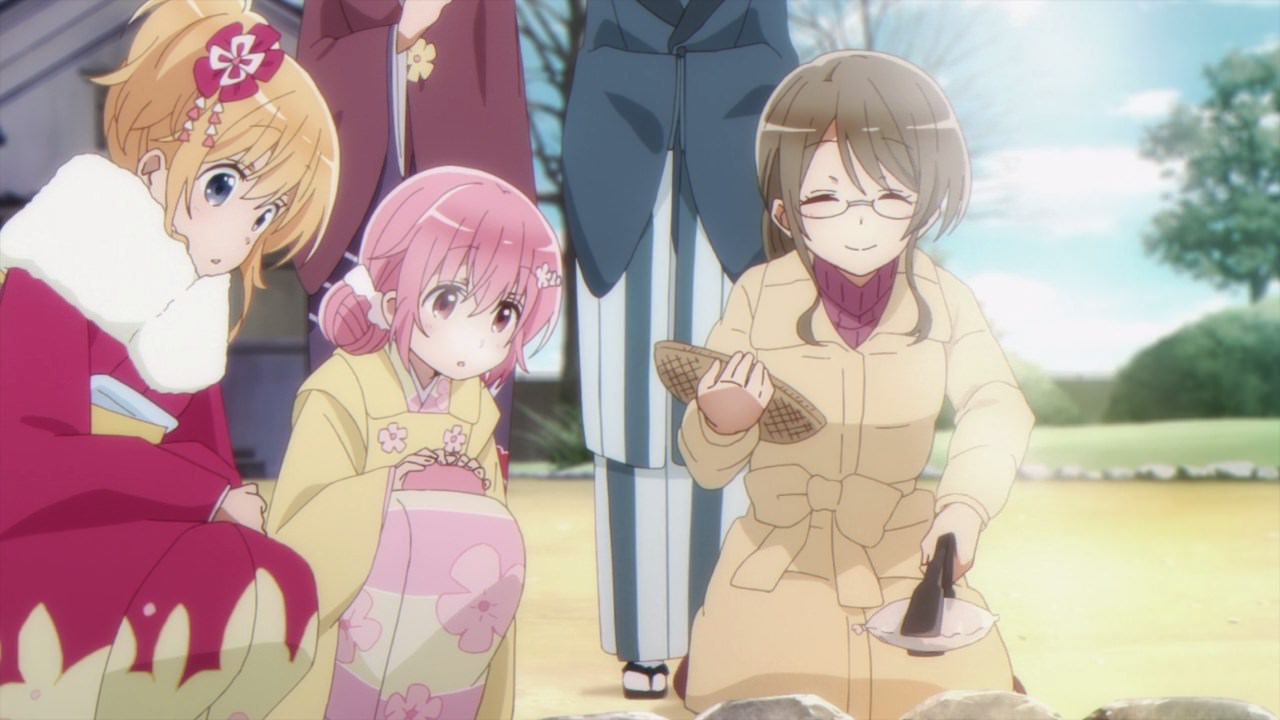 But you know what, I think she’ll get better as Ririka Hanazono brought some sweet potatoes to cook and eat.

Of course, the bonfire needs a lot of fuel to get it the flame going. Fortunately, Kaos-sensei has an idea… 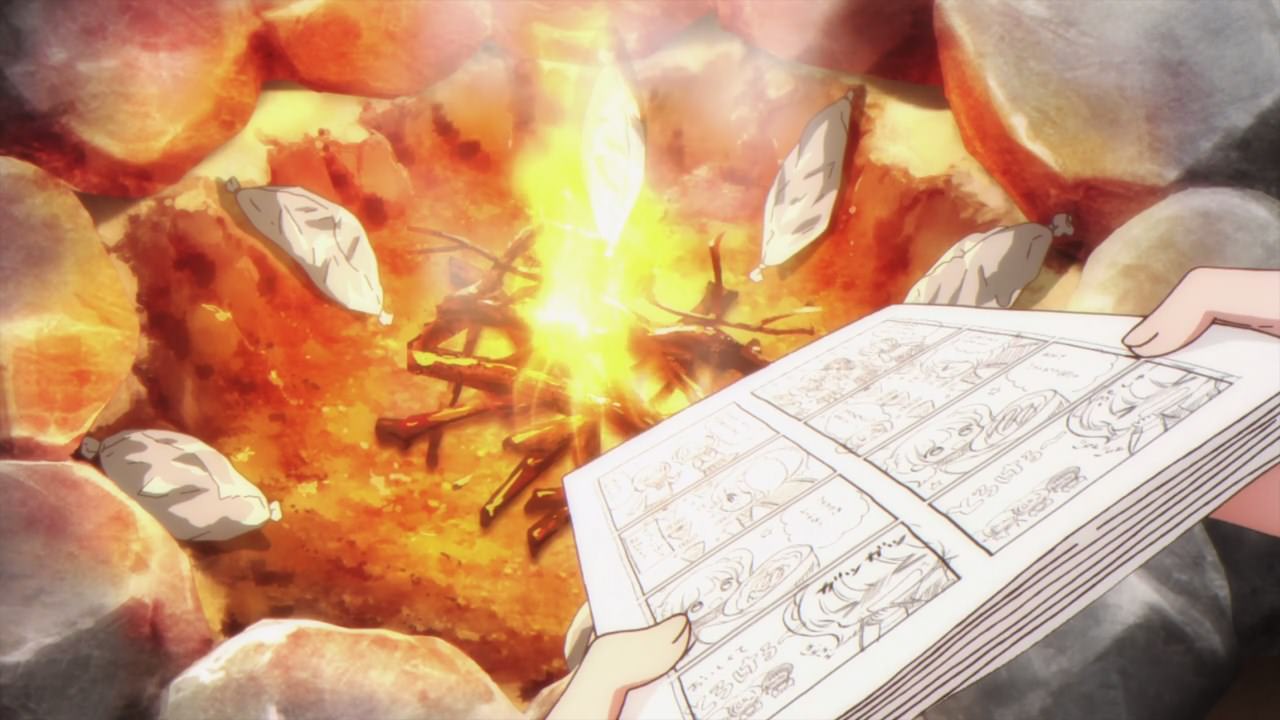 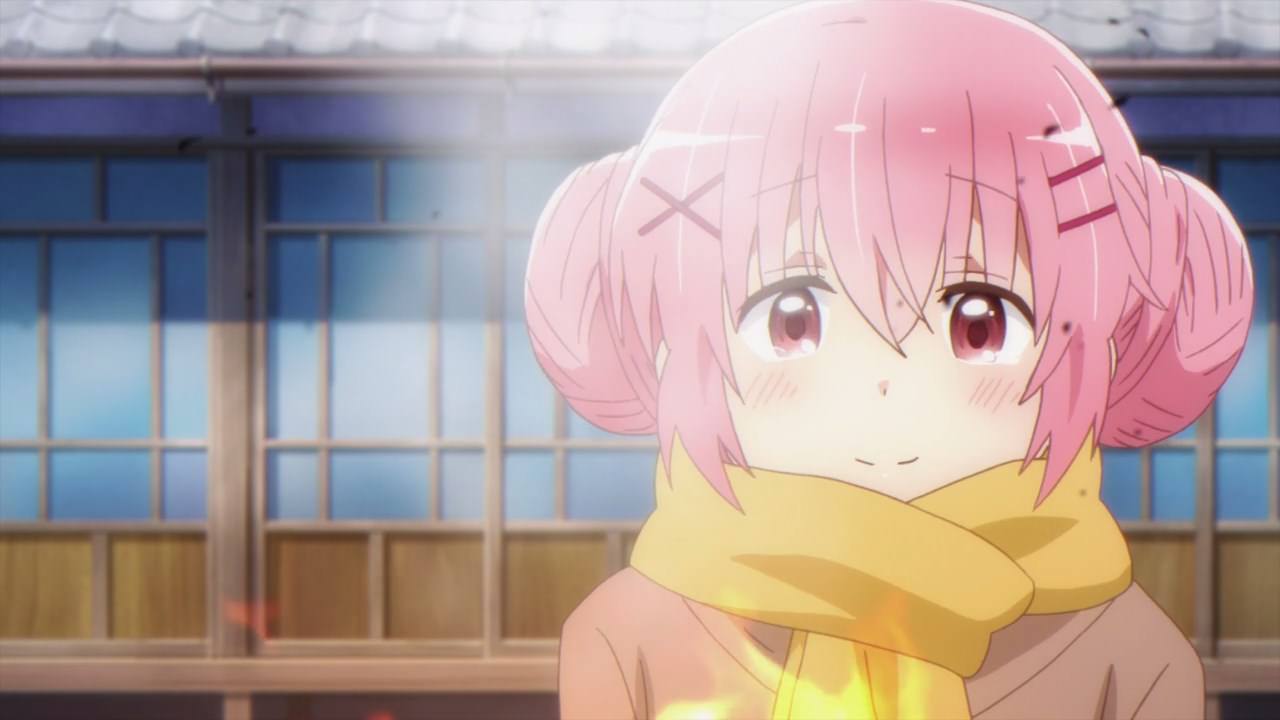 In fact, Kaoruko has a lot of rejected storyboards that she can throw at the bonfire. While it’s sucks that her stories have some potential to be masterpieces, I guess Kaos-chan wants to move on and improve in order to kick-start her manga career!

Anyways, there’s two more episodes to go before closing this series out. Will Kaoruko Moeta get her manga serialized or die trying? We’ll find that out next week!