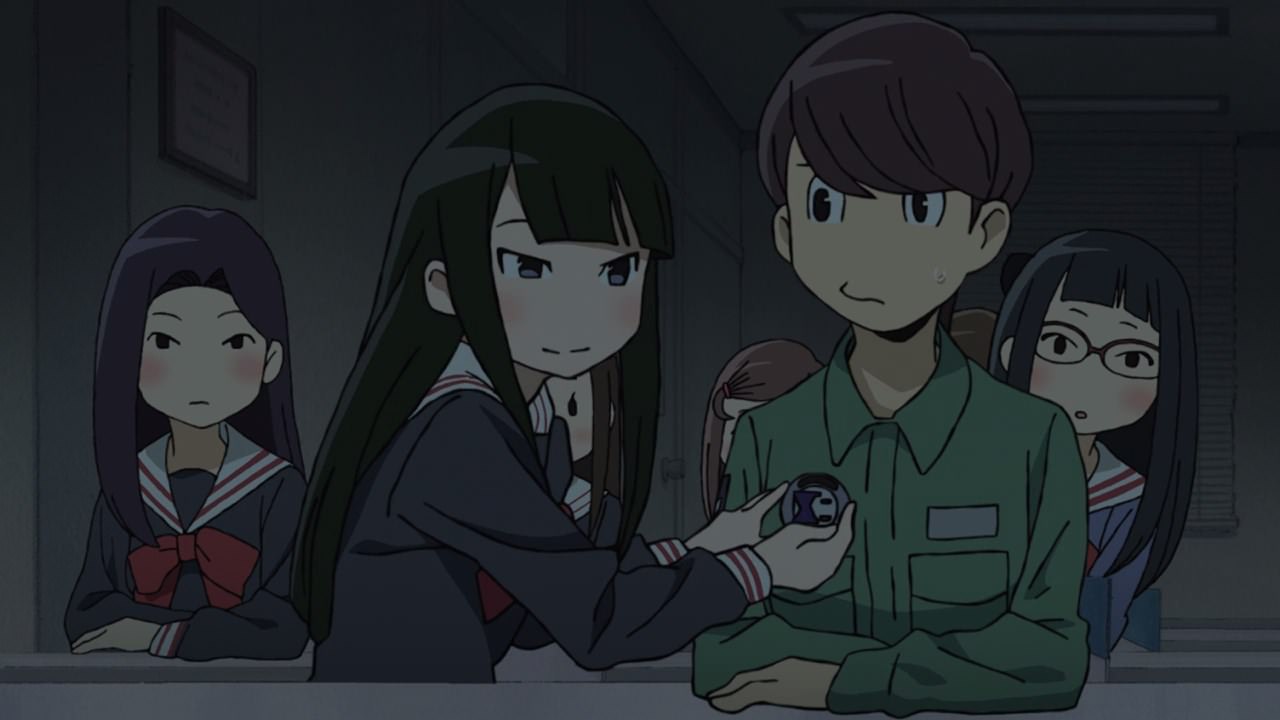 As you can see, seems that Natsume-san is very clingy towards Haruto. Um Misumi, you know that you’re a miko and you can’t show affection towards your childhood friend in public! 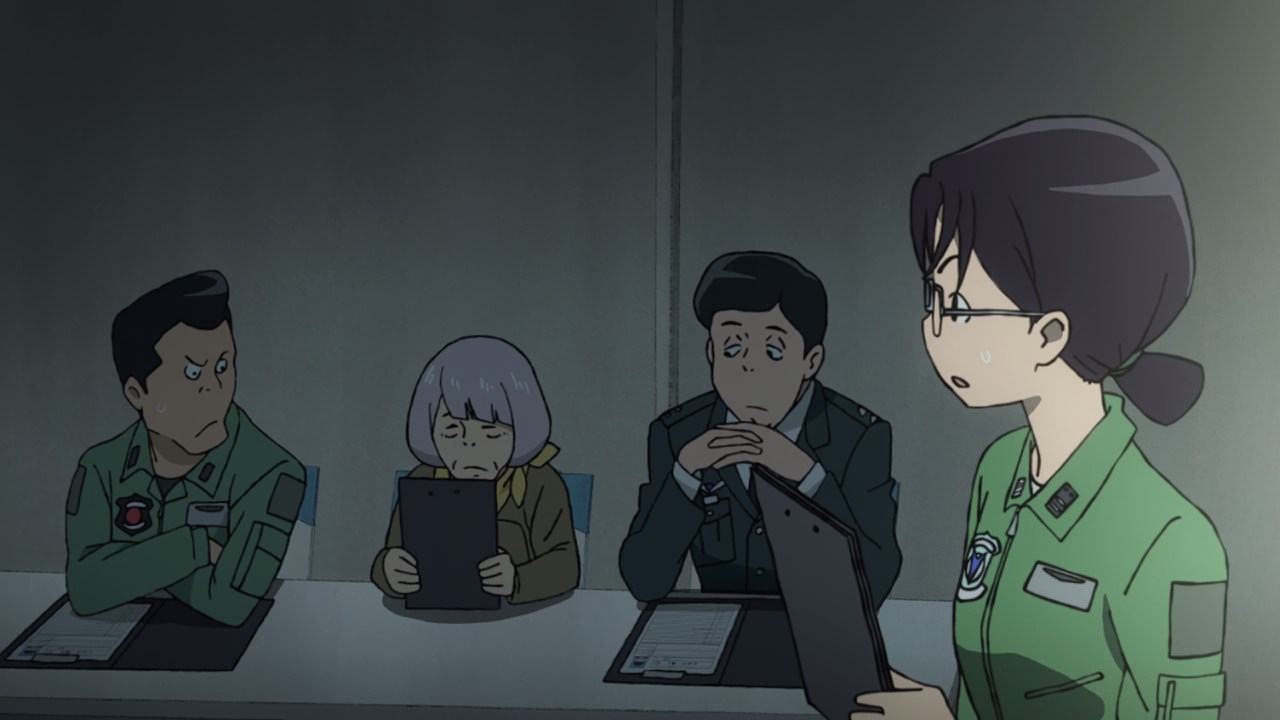 Heck, even Sada Hinomoto is very annoyed that she wants to continue the briefing in peace. Oh well, seems that Natsume is deeply in love with Haru-kun! 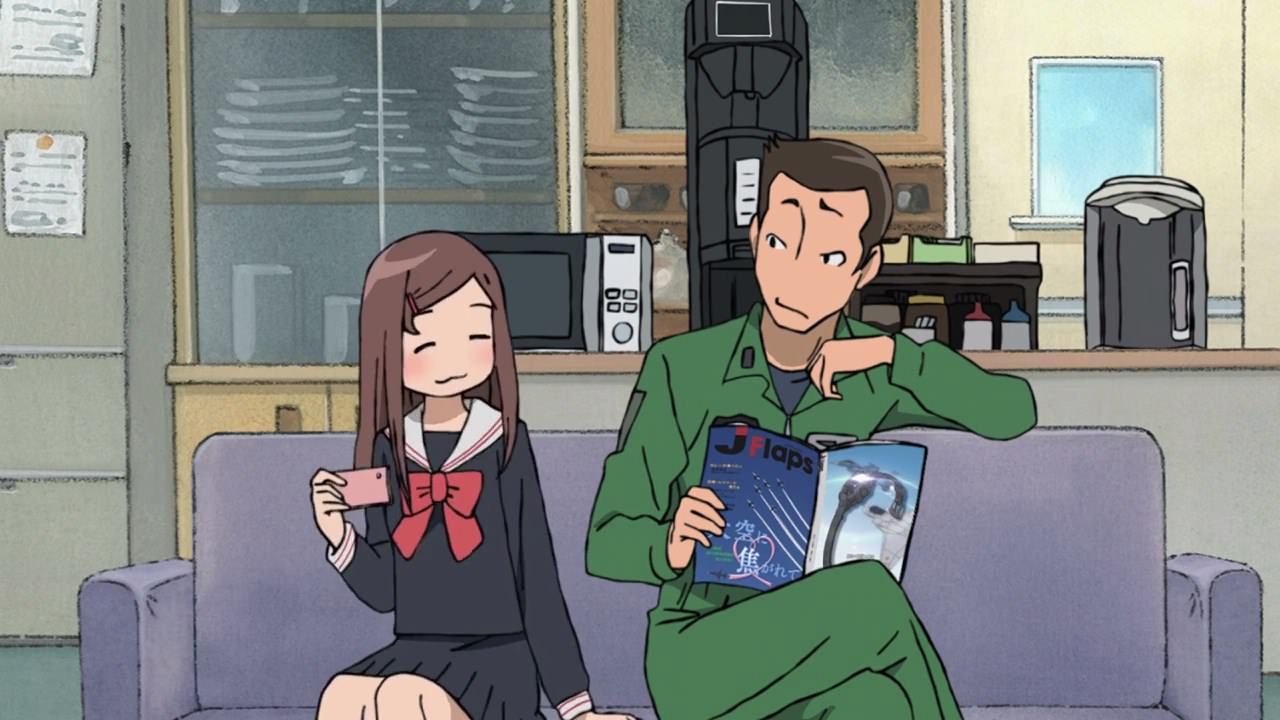 On the other hand, looks like Natsume’s fellow mikos are doing impure things like scoring a date with one of the fighter pilots, even though most of them are minors.

Oh yes, here’s Flight Leader Yutaka Zaitou as he’s taking a selfie with one of the shrine maidens. 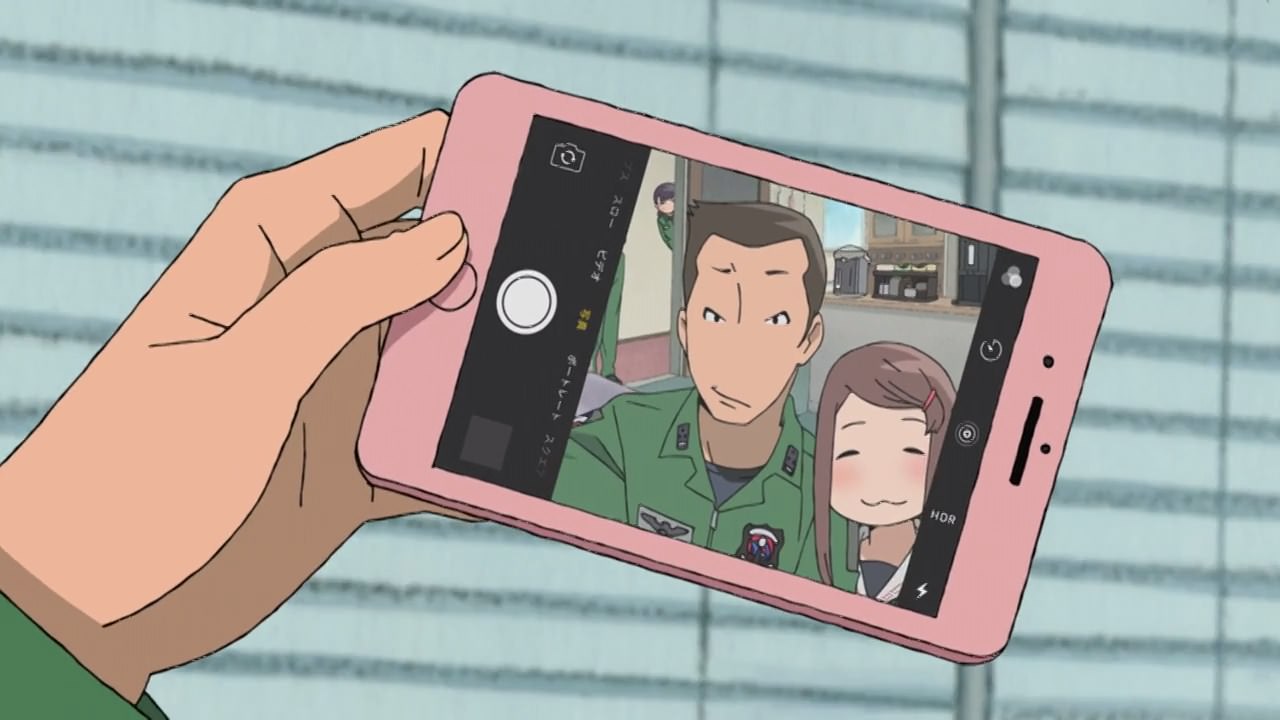 But then, Yutaka Zaitou saw Eru Hoshino through the screen and stop taking a selfie with a miko. Well, glad that he decided not to take a picture with a minor. 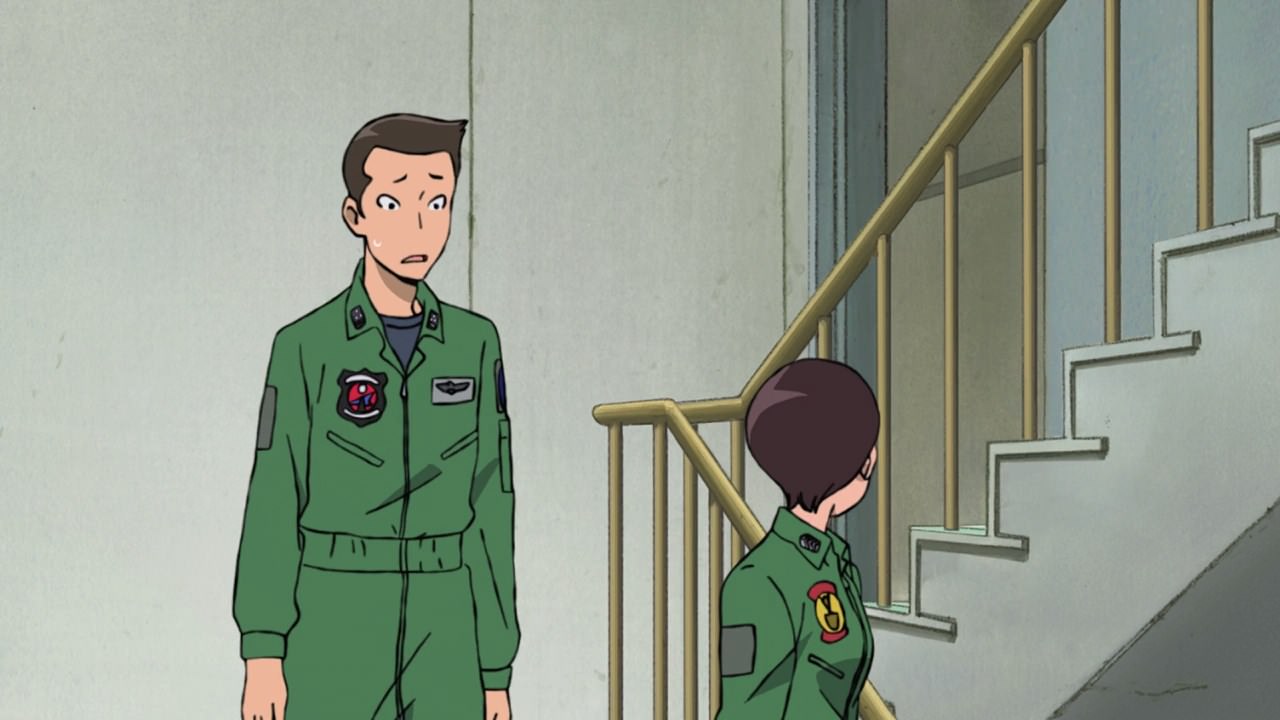 Anyways, Flight Leader Yutaka Zaitou tries to clear up some misunderstandings towards Hoshino, but she had enough and walked away ’cause Zaitou is a scumbag! 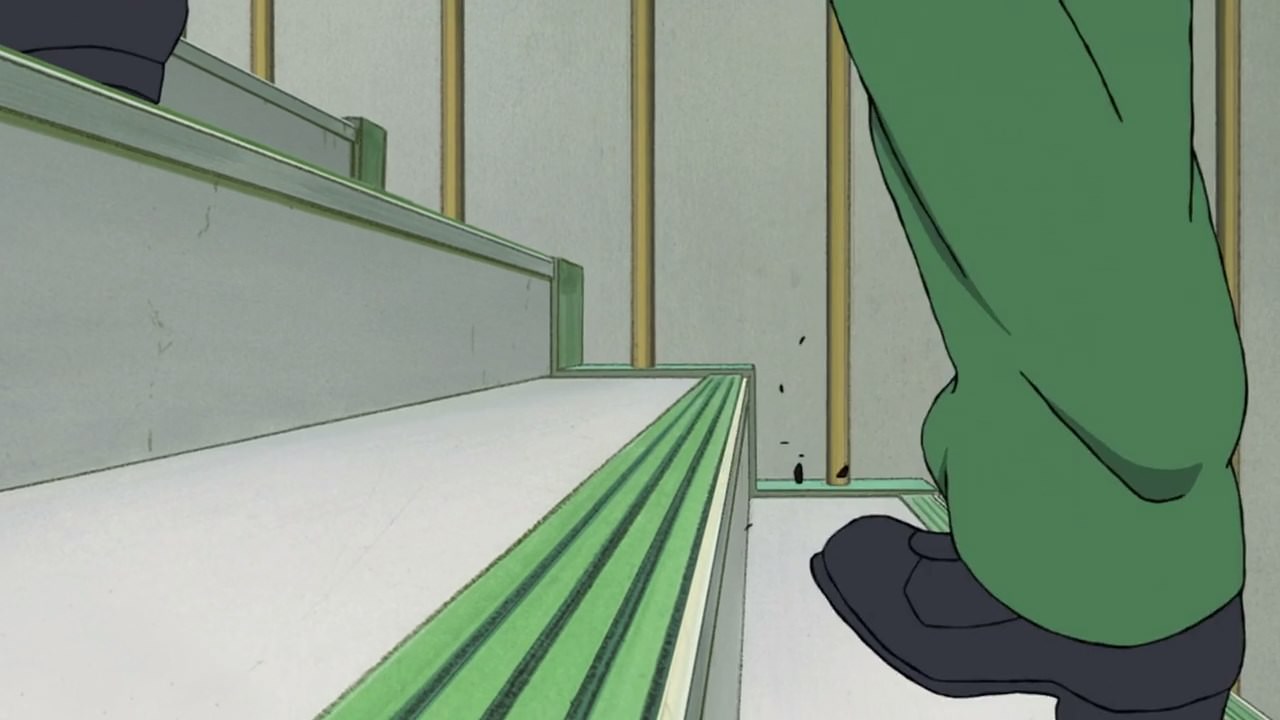 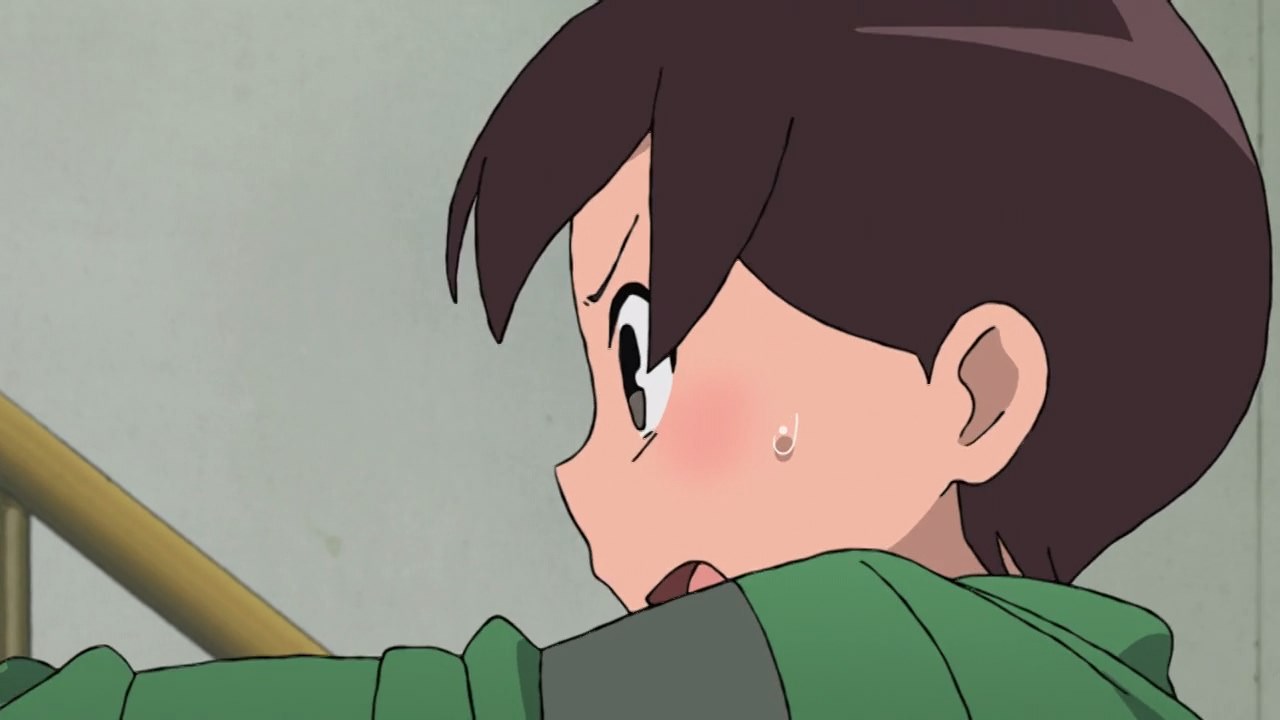 That’s until Senior Master Sergeant Eru Hoshino tripped and she’s about to fall down the stairs. Ugh, I can’t bear to watch this! 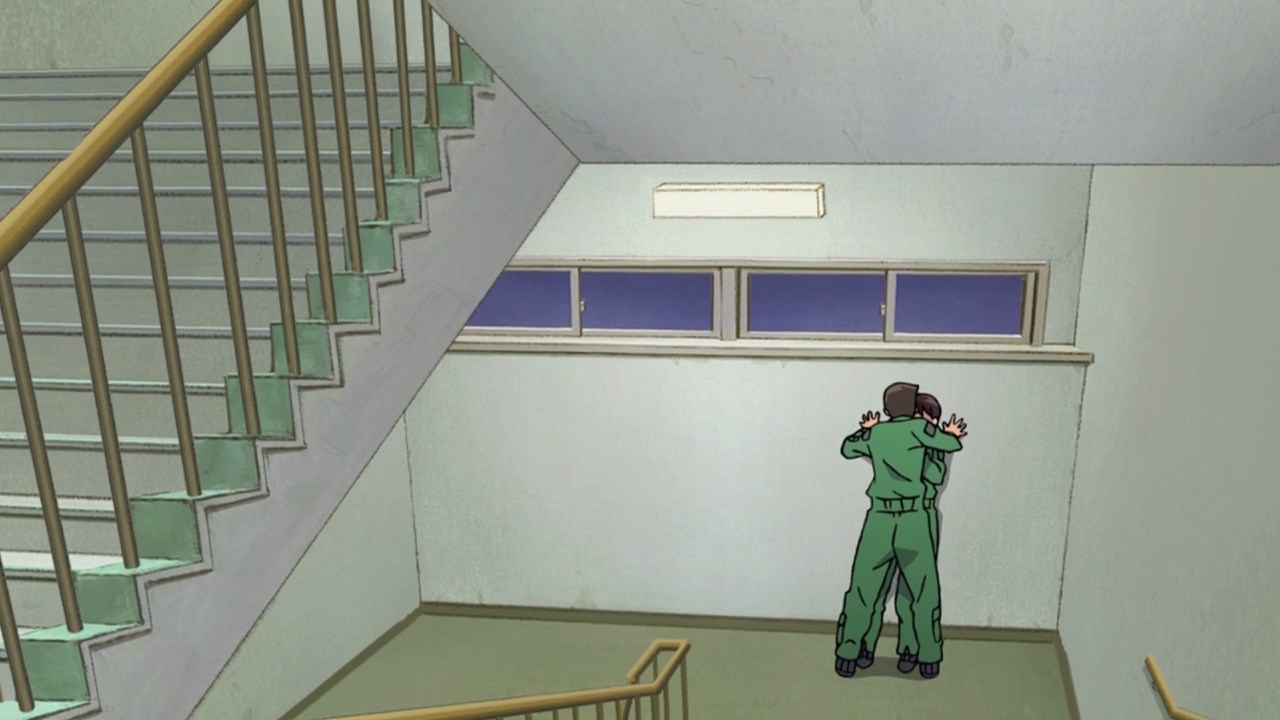 Fortunately, Yutaka Zaitou managed to save Eru Hoshino from hitting her noggin. But then again, something is off… 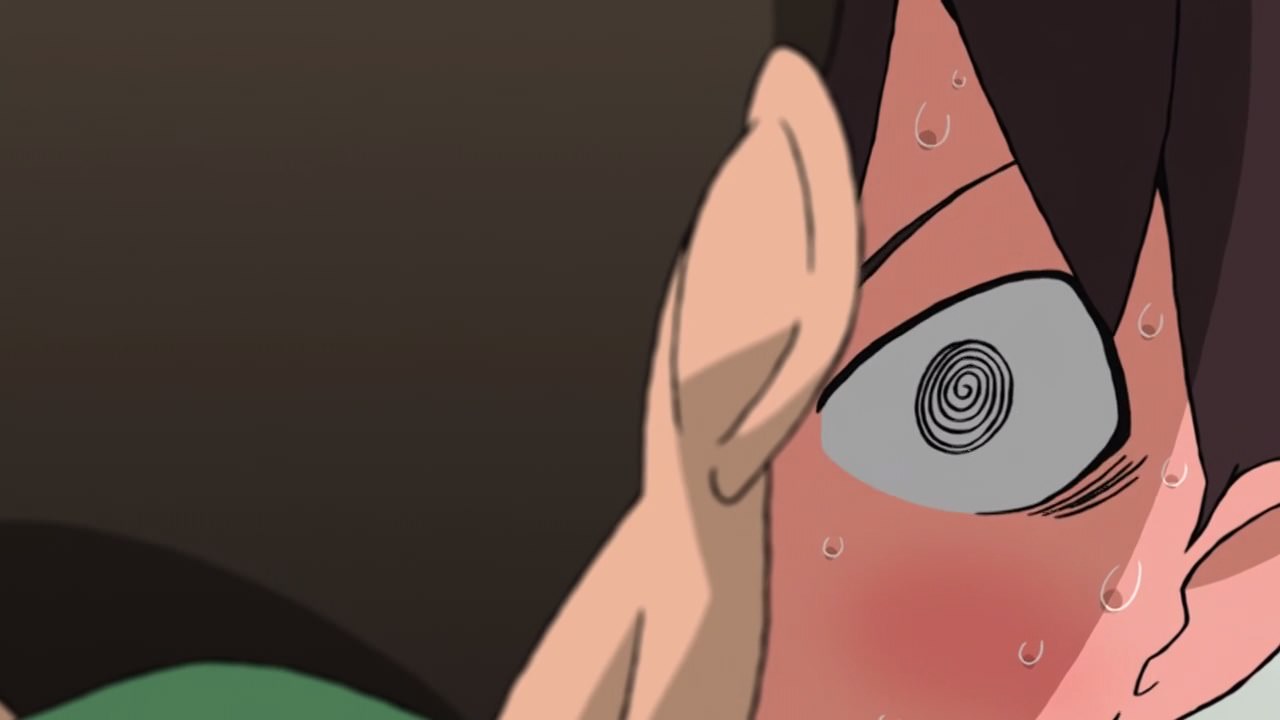 Turns out, Zaitou accidentally kissed Hoshino in the lips. Oh, and did I mention that it was her first? Yeah, this is the worst thing that happened to Eru’s life! 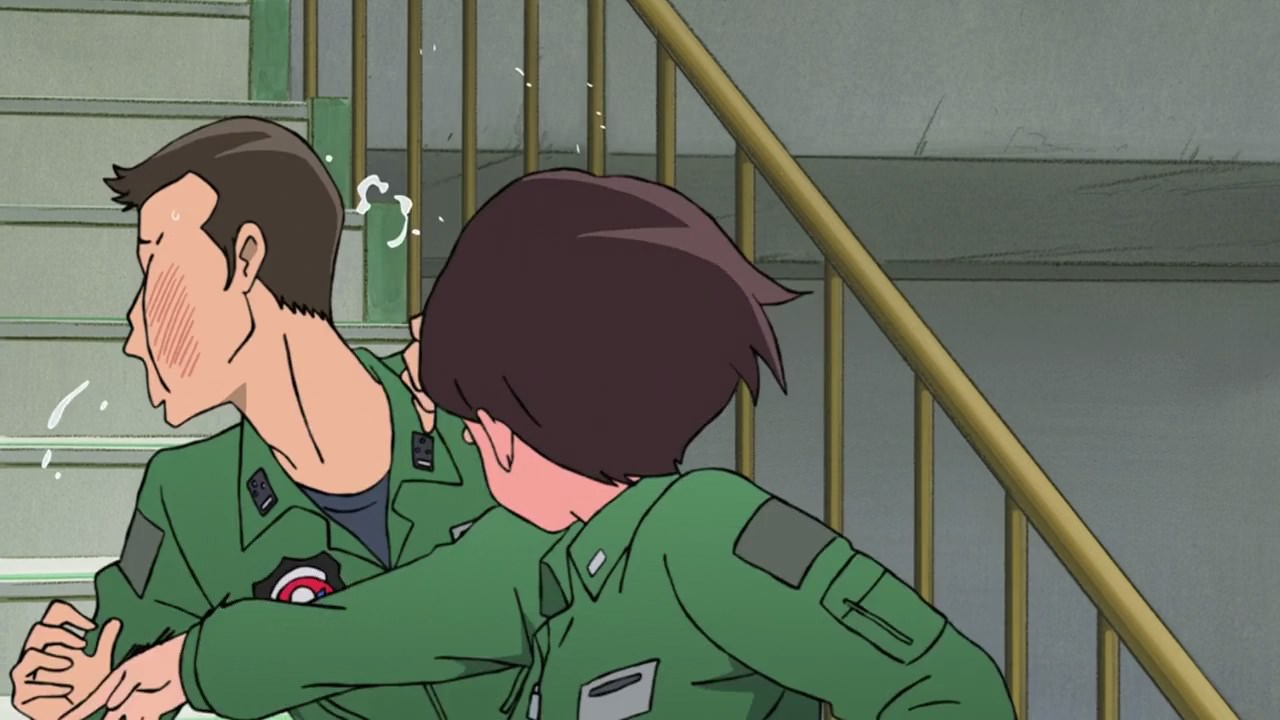 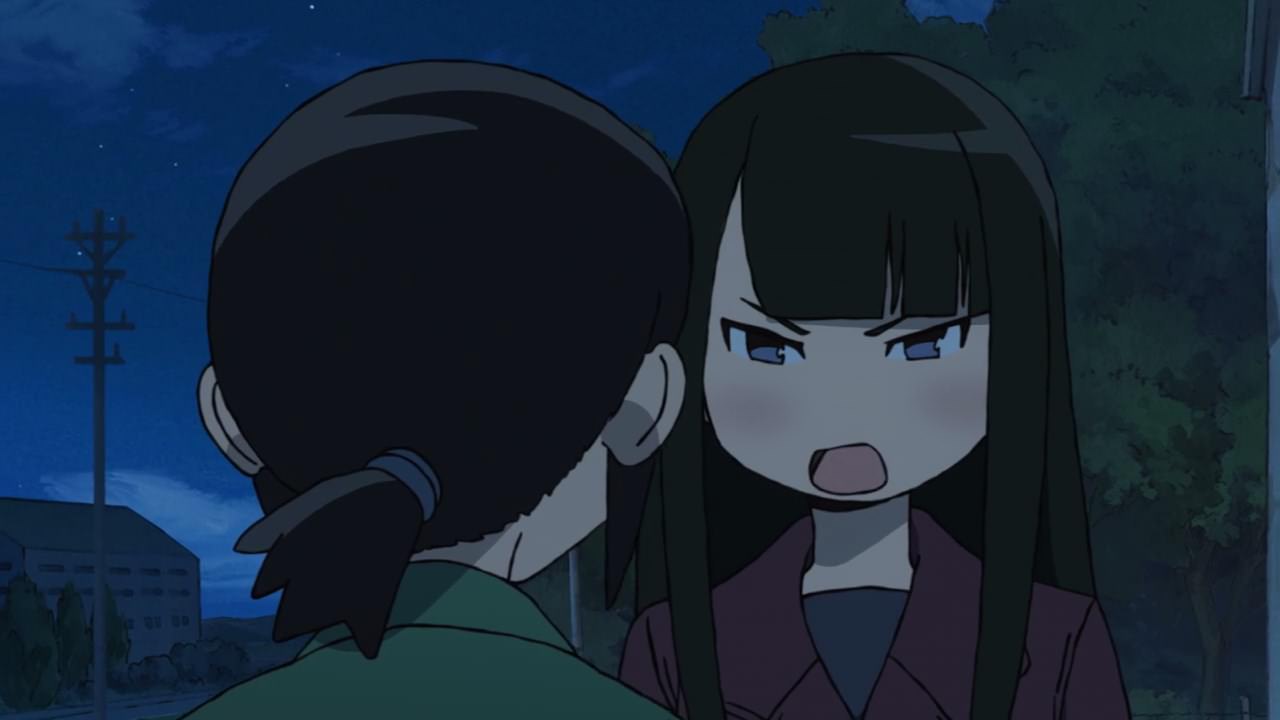 Meanwhile, here’s Hisone Amakasu as she’s confronted by Natsume Misumi in the middle of the night.

There, Natsume told Hisone that she loves Haruto Okonogi and asked the D-Pilot if she’s in love with her childhood friend. Well, Natsume pulled no punches on asking Hisone about her relationship with Haru-kun! 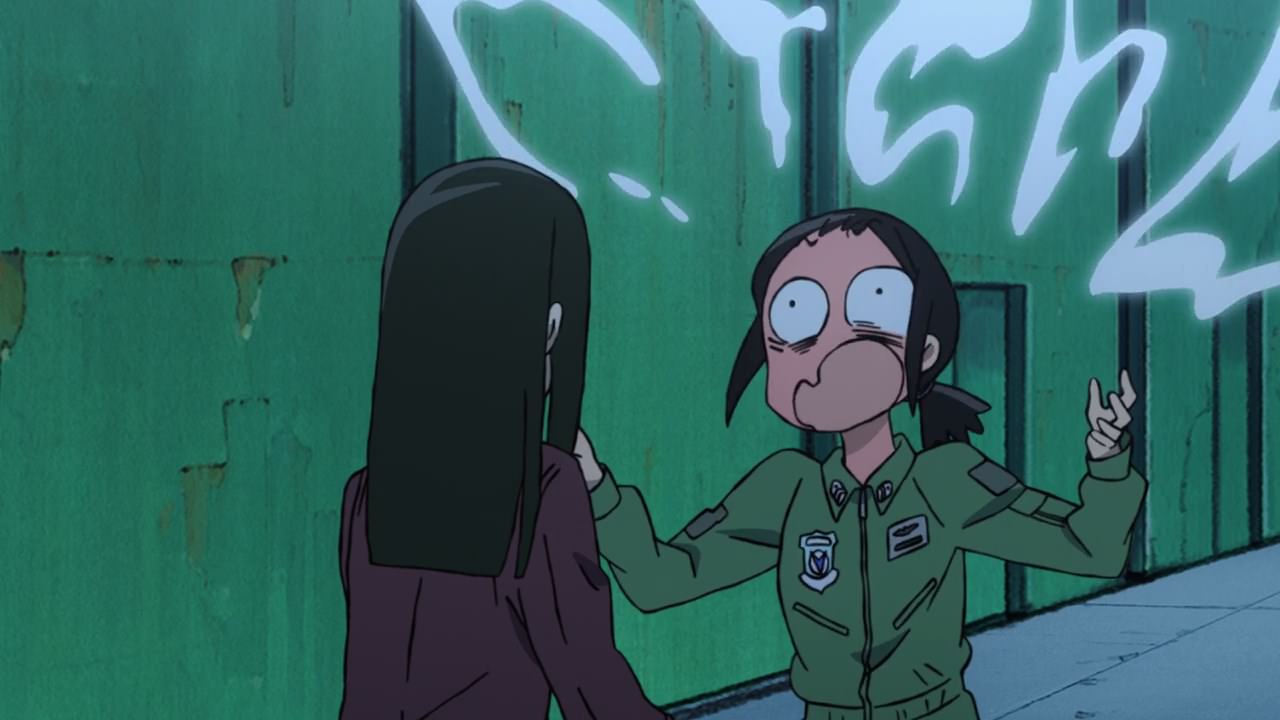 Unfortunately for Amakasu, seems that her face has gone red and started screeching like a banshee.

Damn, I must say that Misaki Kuno’s vocal chords might get broken because of her high-pitch scream! 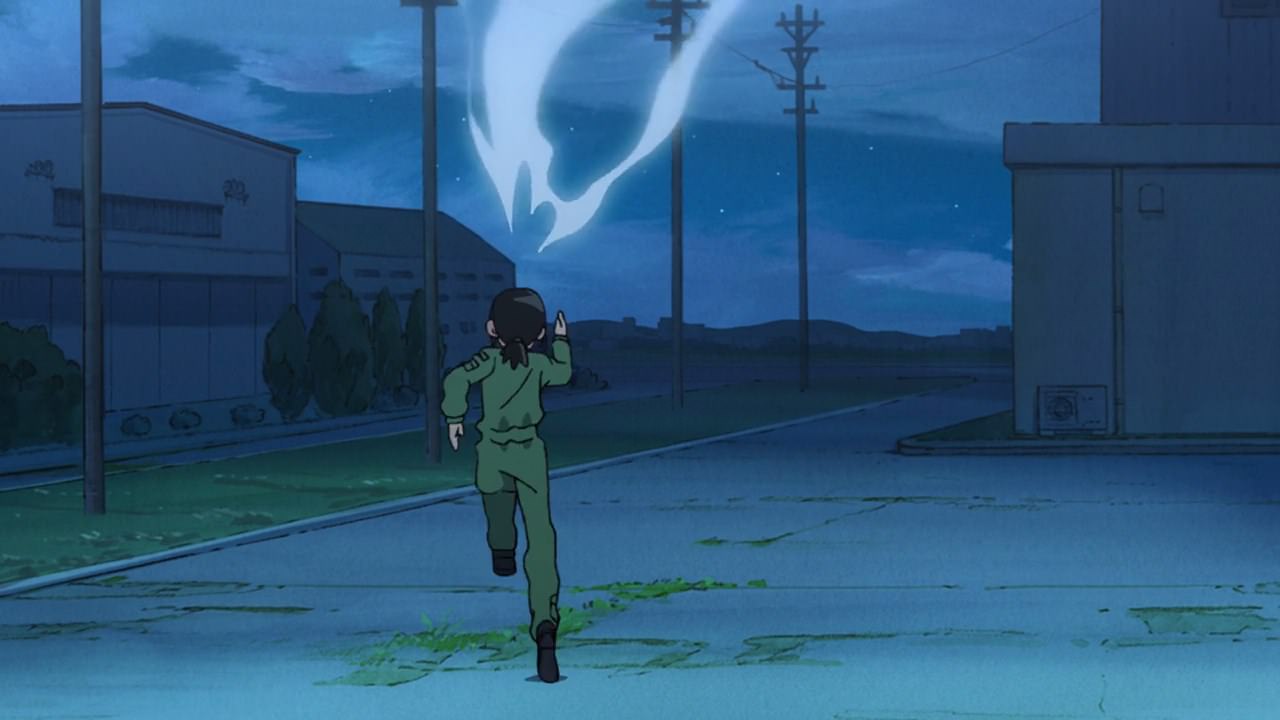 In any case, Hisone Amakasu went to her dorms like a choo-choo train. Seriously, I think she’s in love with Haru-kun! 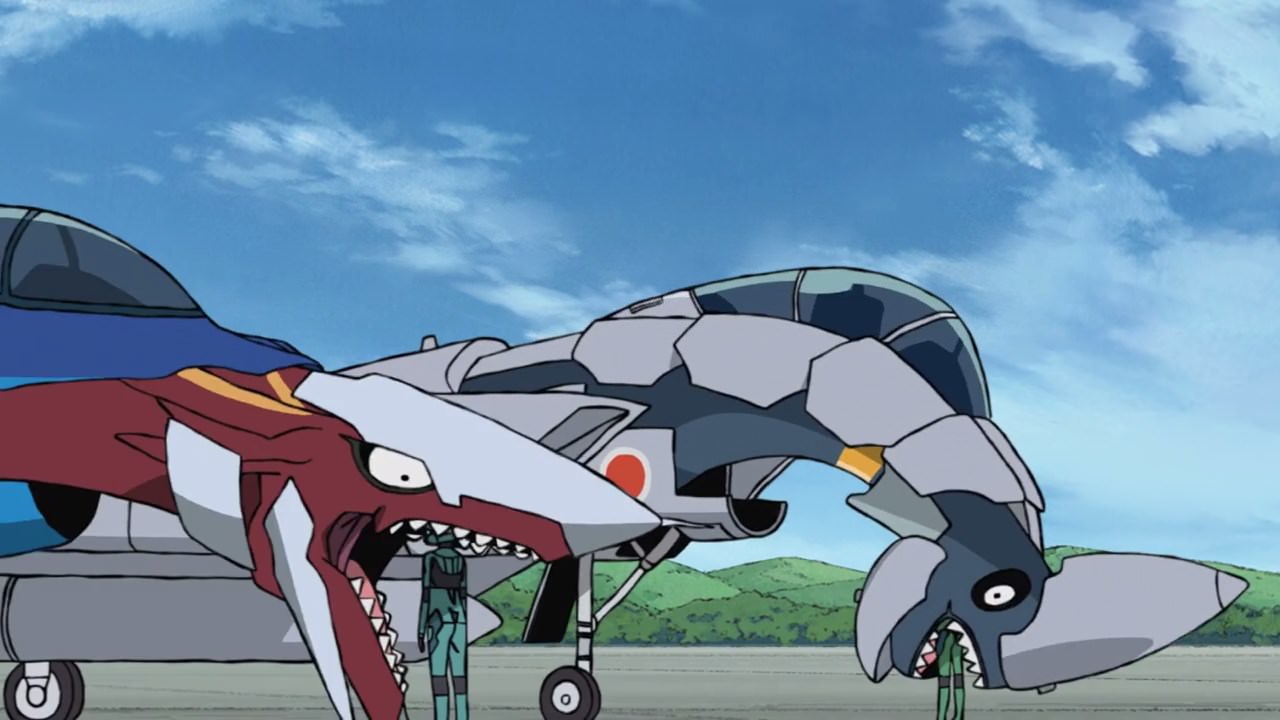 Now then, it’s time for another training in preparation for the Ritual as both Eru Hoshino and Hisone Amakasu got swallowed up by their respective Organic Transporting Flyers as usual.

But then, something is off as Amakasu and Hoshino’s pilot suits are starting to dissolve.

Wait, that doesn’t seem right as Director Hiroki Ikushima put a lot of effort to make his pilot suits tough and comfortable for the D-Pilots. 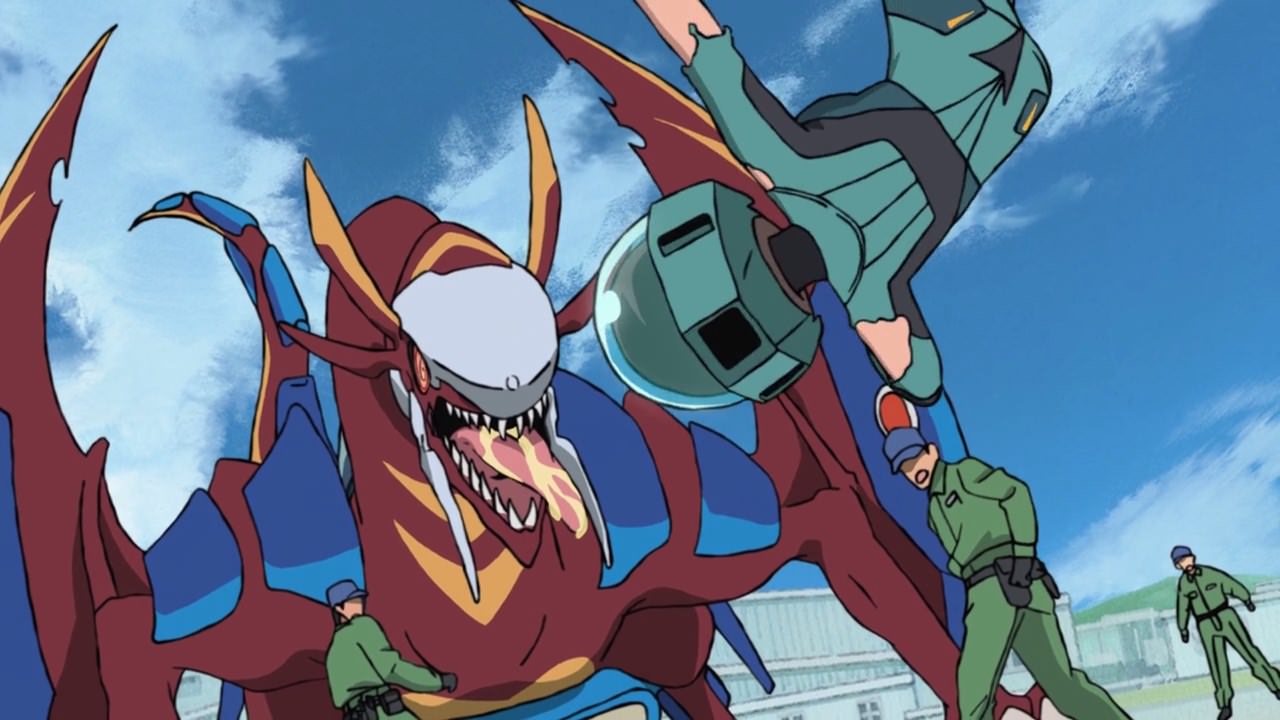 Anyways, it turns out that both Norma and Maso-tan are acting weirdly upon swallowing their respective D-Pilots.

In fact, the reason why the pilot suits are melting faster is because both Norma and Maso-tan are trying to digest them. Fortunately, Norma managed to spit out Eru Hoshino before she becomes dragon food. 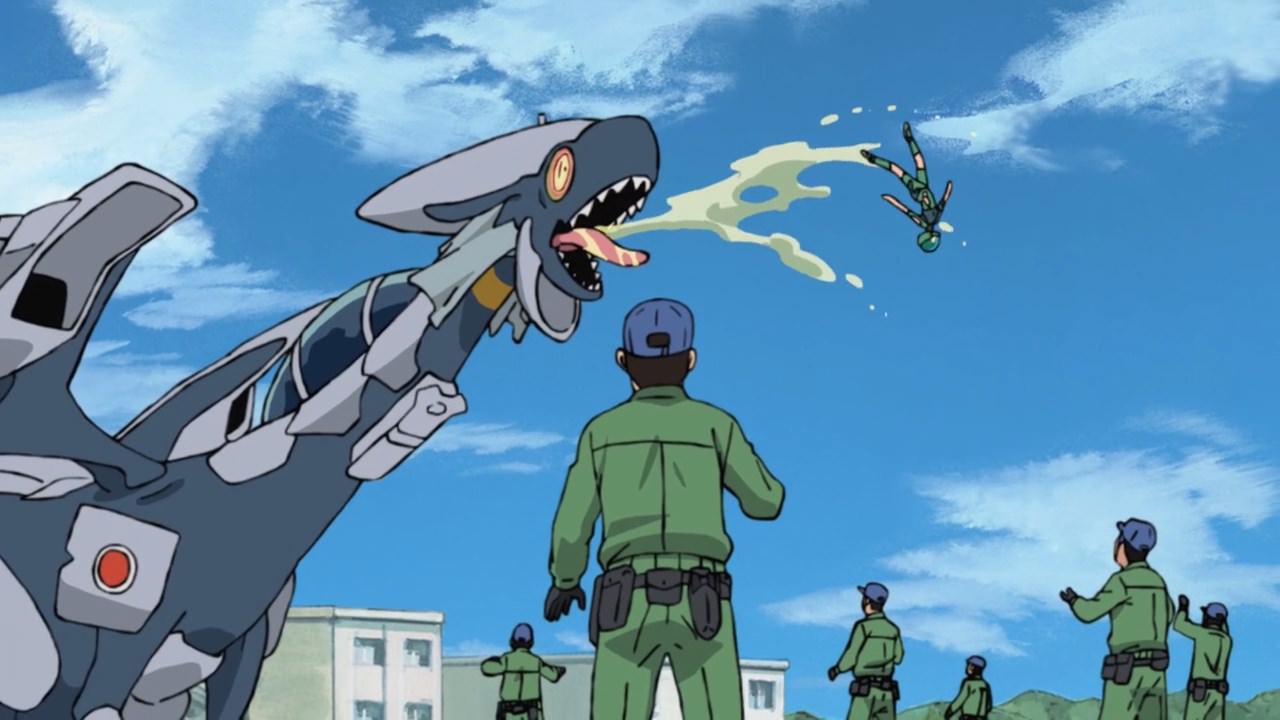 Also, Maso-tan spit out Hisone Amakasu too which means that both D-Pilots are safe. Still, what’s going on with both Maso-tan and Norma’s sudden change of behavior. 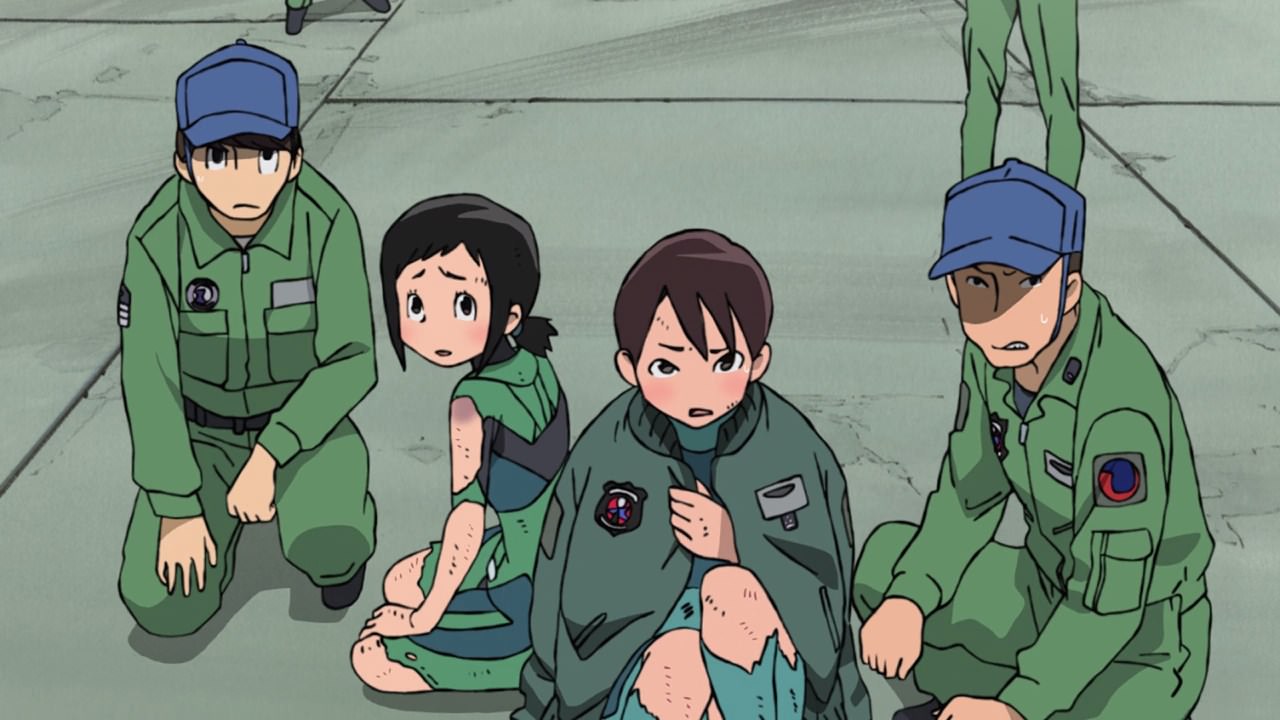 So while Amakasu and Hoshino are tending their burned skin got to the dragon’s strong gastric acid, they were approached by Administrative Vice-Minister Iiboshi and explained to them regarding this rare phenomenon. 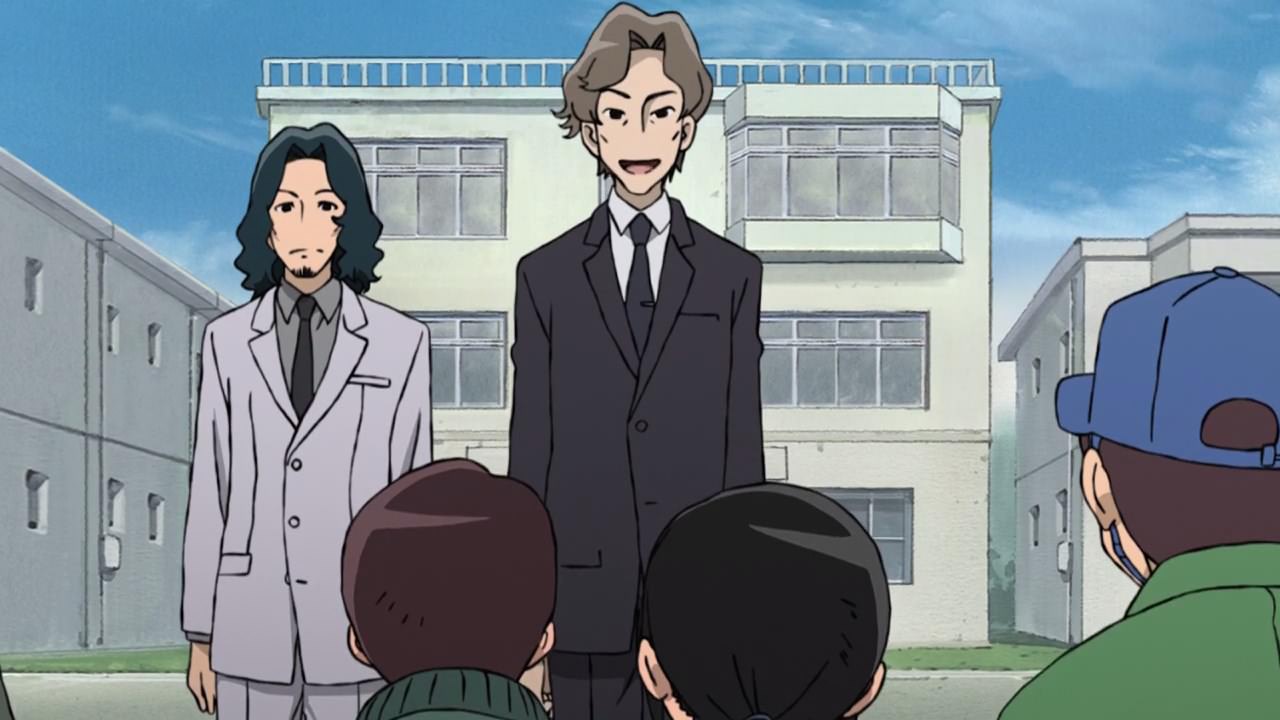 Oh, and the trigger of it is because both Hisone Amakasu and Eru Hoshino are harboring romantic feelings towards other people apart from dragons. Basically, Vice-Minister Iiboshi doesn’t like D-Pilots having emotions to the opposite sex which is why he wants to destroy their pure hearts back in Episode 7 so that they’ll devote their lives to their OTFs.

Well, I must say that I was shocked after watching Episode 9! Of course, what will Hisone and Eru do now that they can’t pilot their respective Organic Transporting Flyers? With that said, I’ll see you next time!