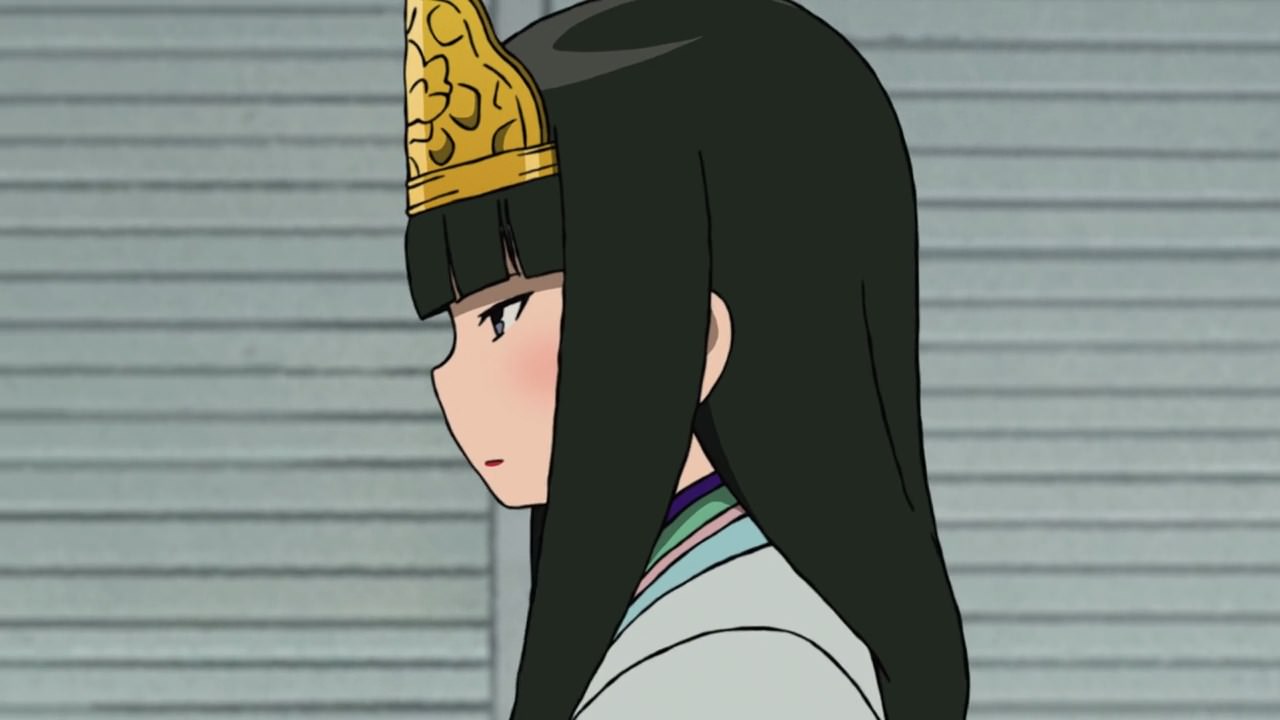 Well everyone, it appears that the gods have chosen Natsume Misumi as Binden-sama who will guide Mitatsu-sama to its rightful place.

Still, we don’t know what happened to Hisone Amakasu though… 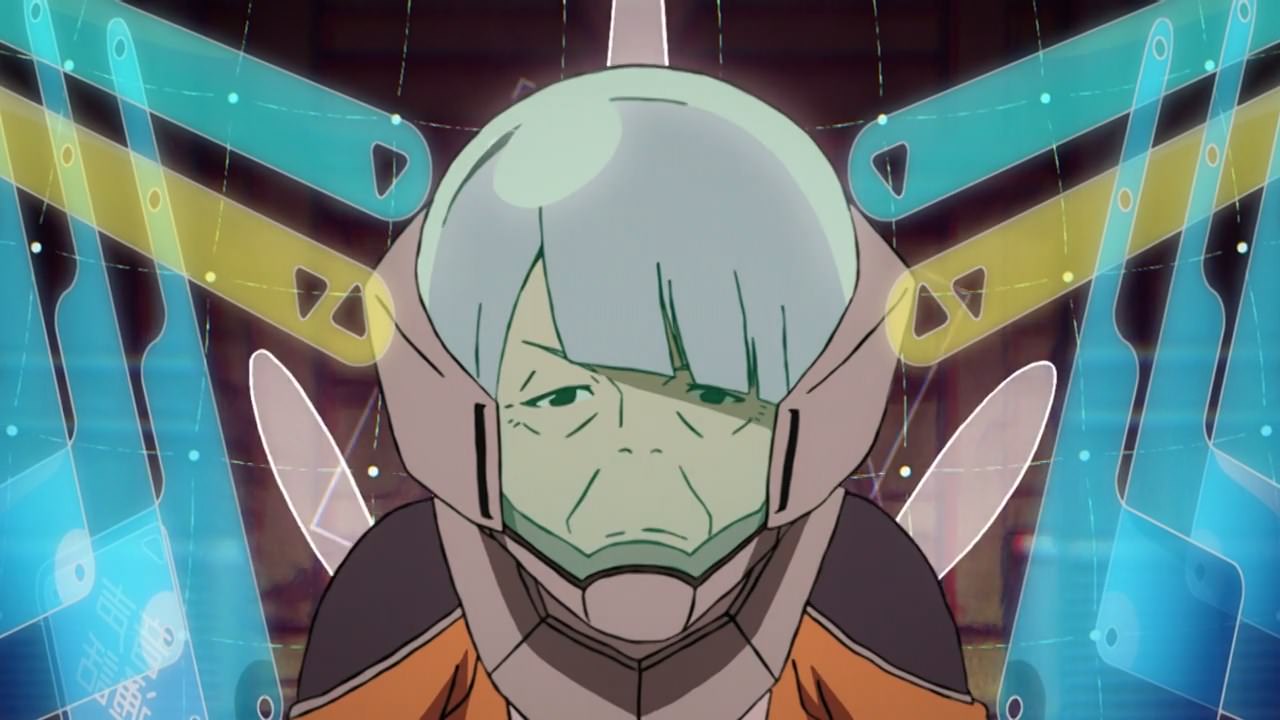 On the other hand, looks like the Joie lady Sada Hinomoto will become a D-Pilot again as she rides Maso-tan for the Ritual.

Then again, I wish Nao “Sexy Jaguar” Kaizaki would pilot Maso-tan since she’s a D-Pilot after all. 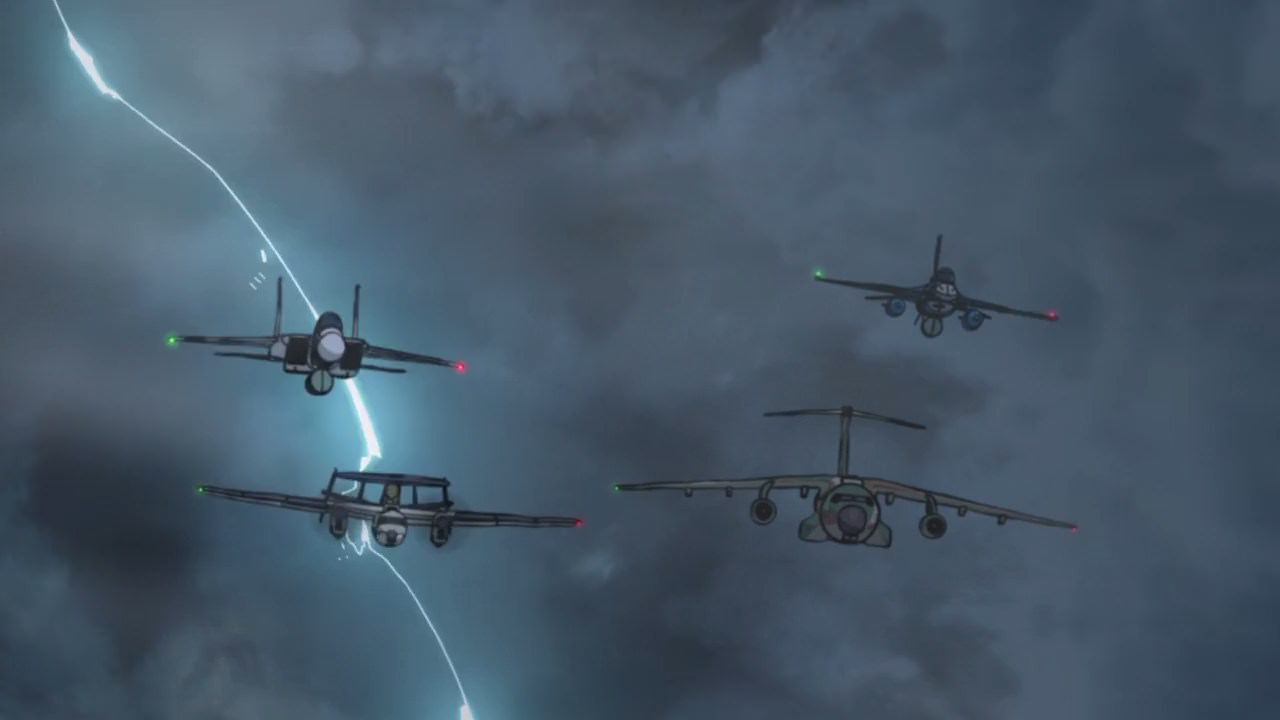 Anyways, it’s time for the Ritual where the D-Pilots will fly their Organic Transporting Flyer through the eye of the storm.

Sure that it’s dangerous for pilots to get closer to a typhoon but this one is different. 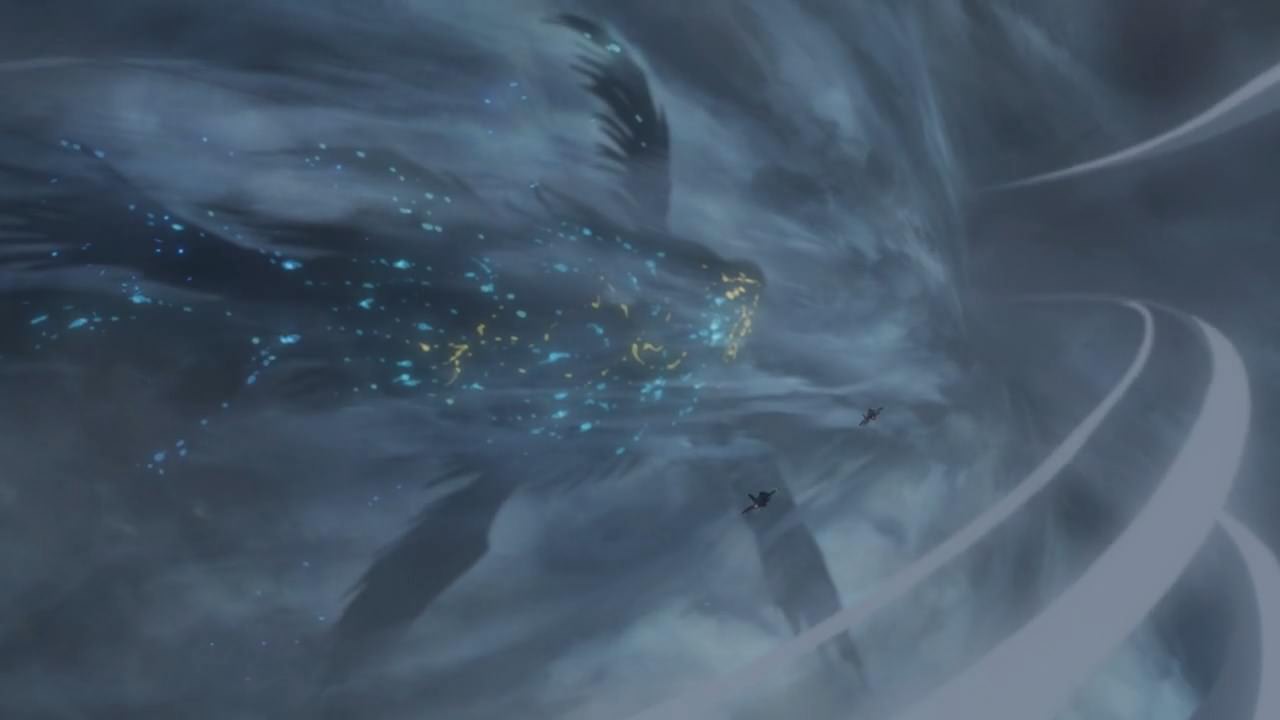 That’s because inside the storm lies Mitatsu-sama who looks like a giant goldfish from a distance. Yeah, its massive size dwarfs that of Futomomo. 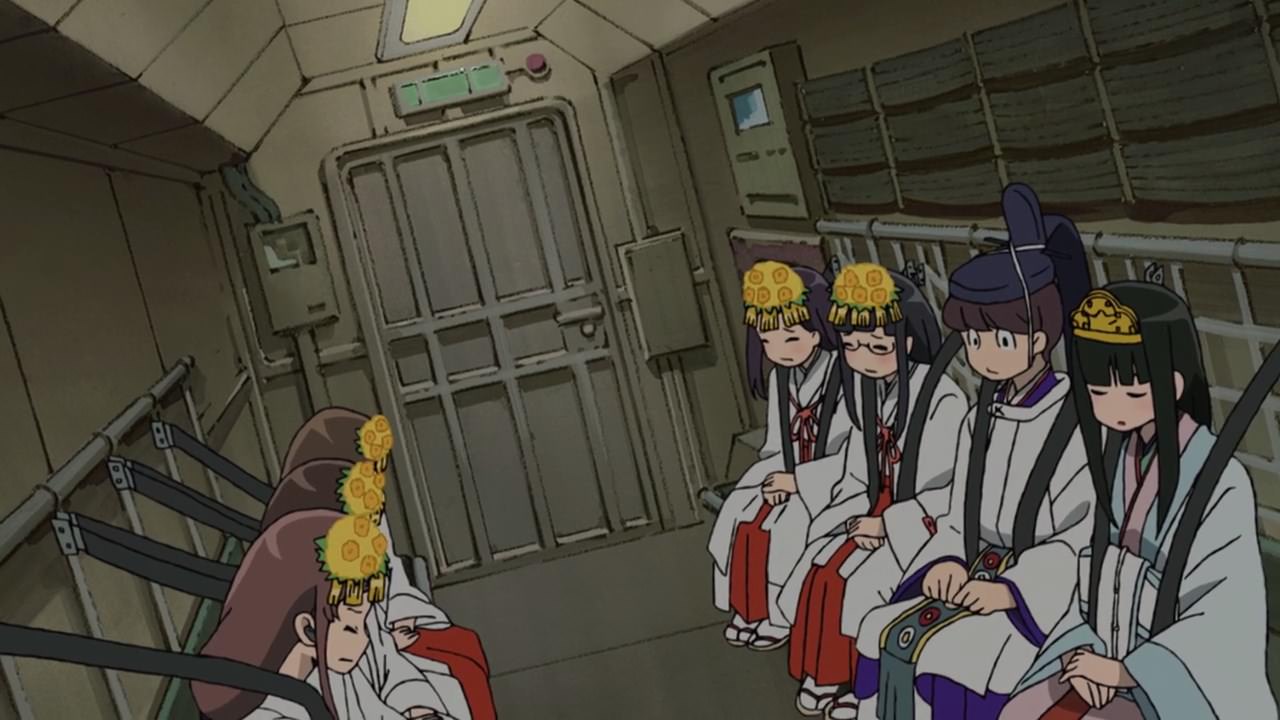 And speaking of Futomomo, Technical Sergeant Mayumi Hitomi’s OTF is carrying Haruto Okonogi and the shrine maidens towards Mitatsu-sama.

In any case, let the Ritual begin but where’s Hisone Amakasu anyway? 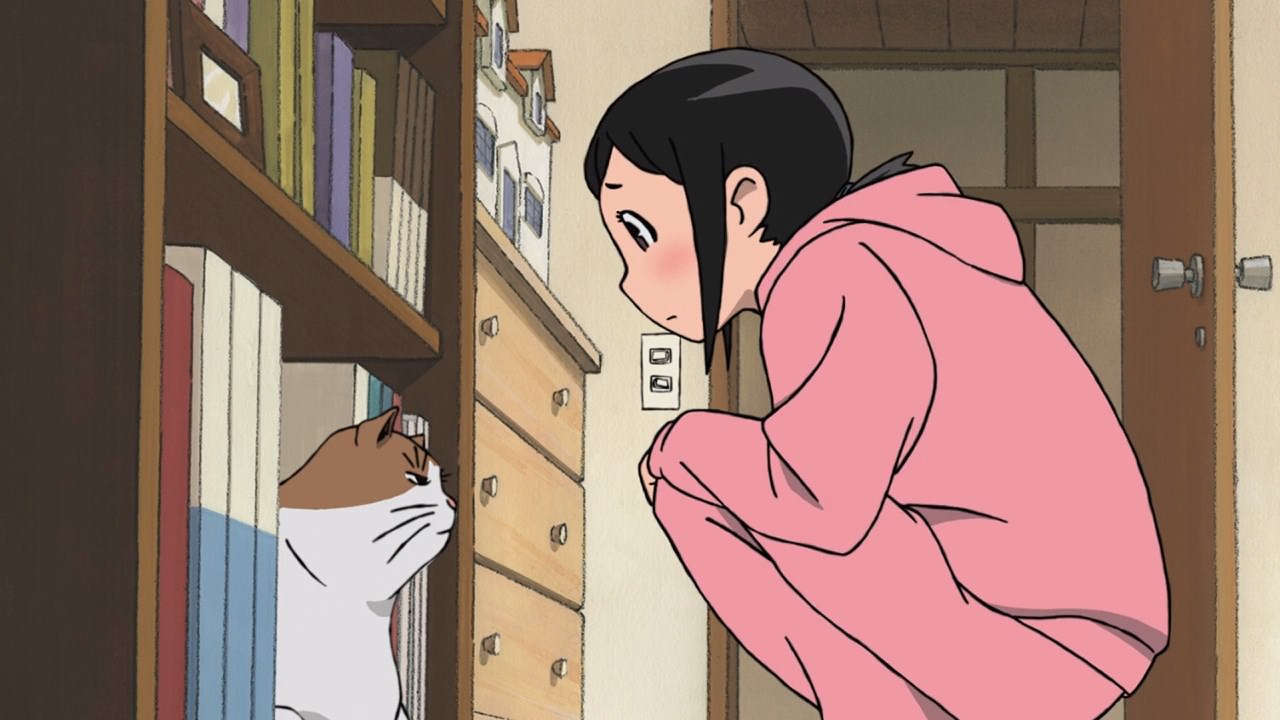 Well, Hisone is at her house playing with her pet cat Goro. Yeah, it sucks that she has to leave the Japan Air Self-Defense Force due to the anastomosis that prevents her from piloting Maso-tan.

But you know what, Hisone Amakasu still miss her fellow D-Pilots and Haruto Okonogi, which Hisone admits that she has fallen in love with him ever after Episode 7. 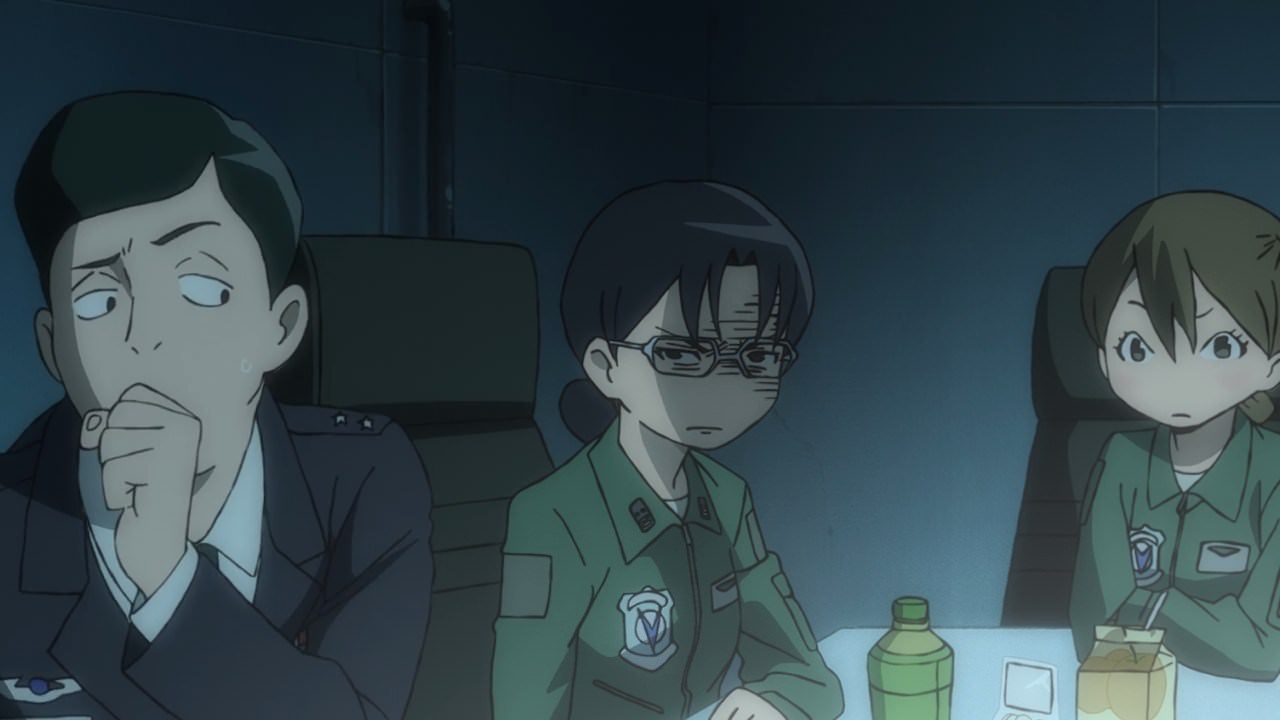 Now let’s go back to the JASDF where Commander Hiroshi Sosoda, Lt. Colonel Remi Kakiyasu, and Nao Kaizaki are watching the Ritual from a mobile command center. Oh yeah, Administrative Vice Minister Iiboshi is in too.

Anyways, seems that Lt. Colonel Kakiyasu is still pissed at Amakasu for quitting the JASDF on the eve of the Ritual, thinking that Hisone doesn’t take her job seriously. But you know what, nothing is perfect and I have to say that Remi Kakiyasu is just placing all of her hopes towards Hisone Amakasu in order to become the best D-Pilot, something that Kakiyasu failed to do in her lifetime. 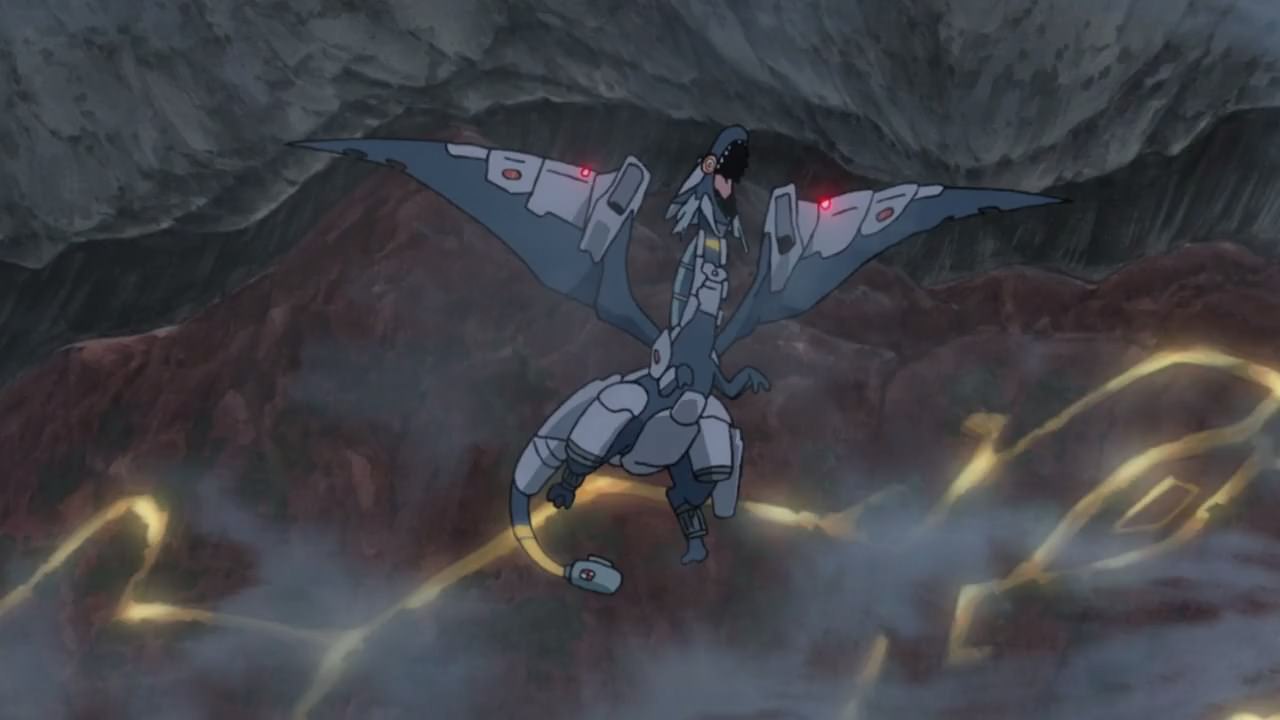 Moving back to the Ritual where it seems that we have a problem with Maso-tan. Looks like the anastomosis is acting up again! 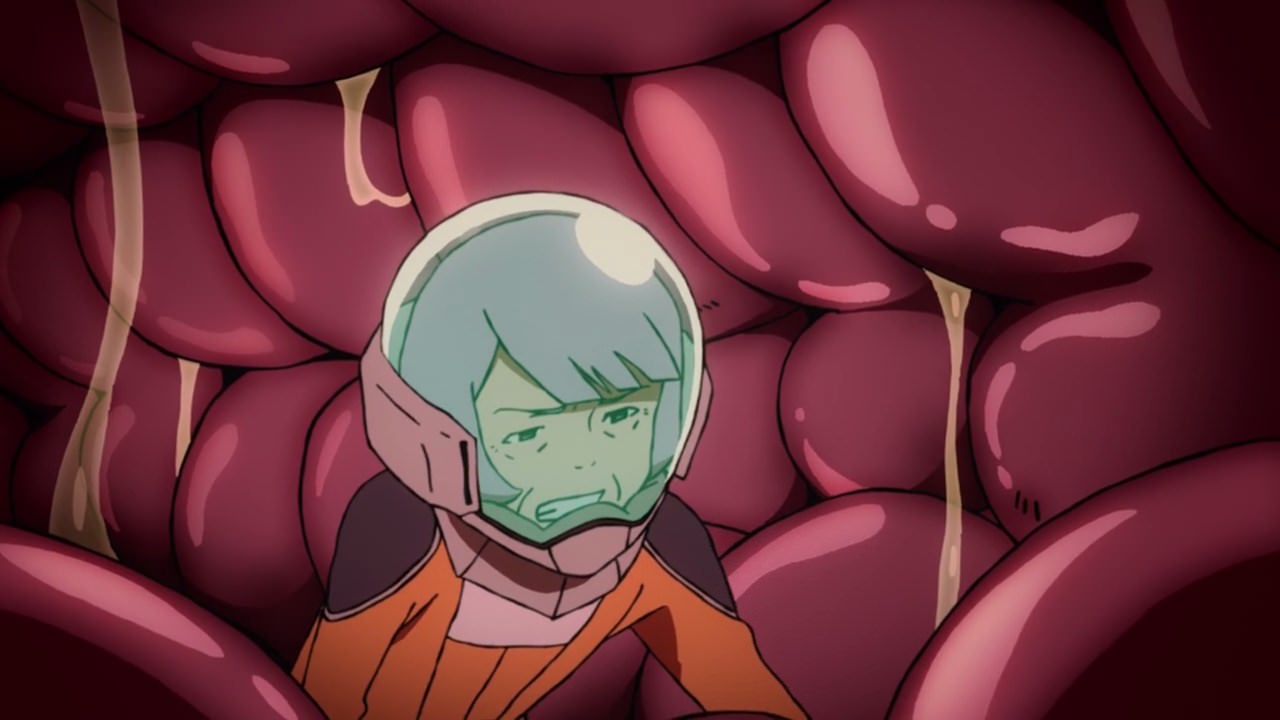 And this time, it’s Sada Hinomoto as she’s about to get digested by Maso-tan.

Wow, seems that Sada-san has some lingering feelings that it affects Maso-tan greatly. But the reason for having the anastomosis right now is far deeper for Hinomoto… 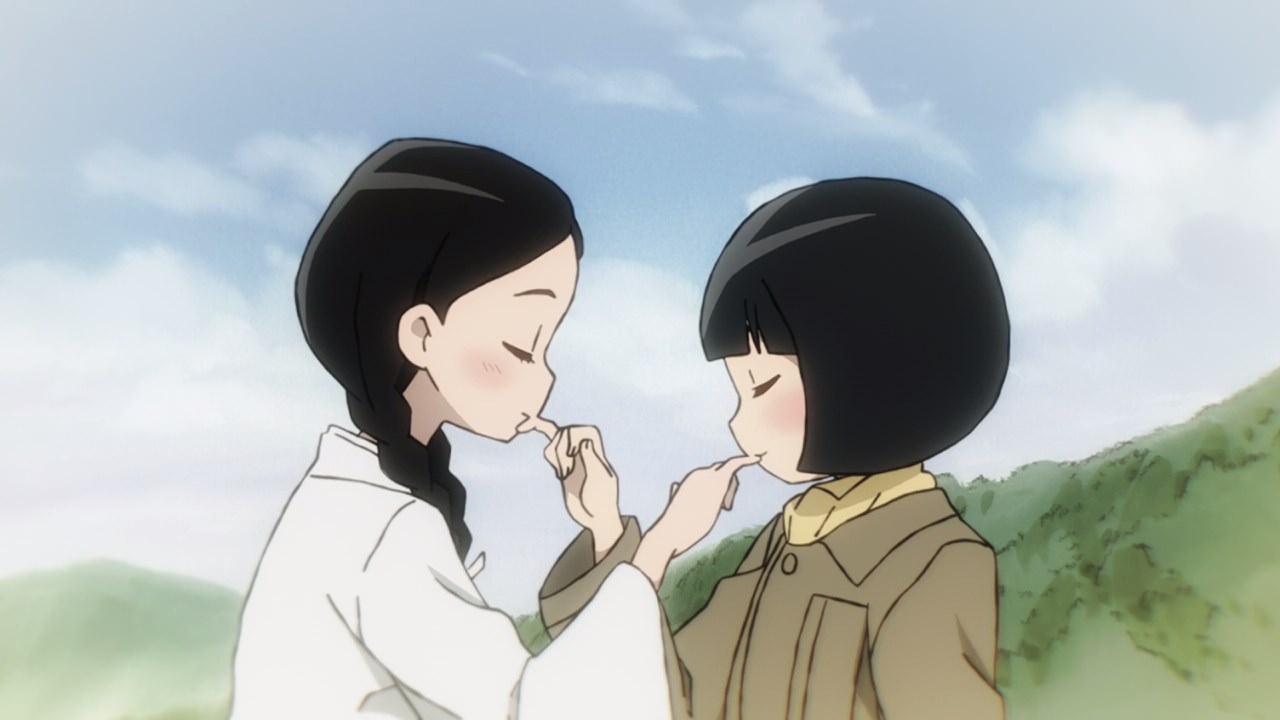 In fact, she has deep regrets over the loss of her best friend Yae-chan. I mean look at them, these girls have some intimate feelings for each other. It’s no wonder why Sada-san has the anastomosis at this crucial moment. 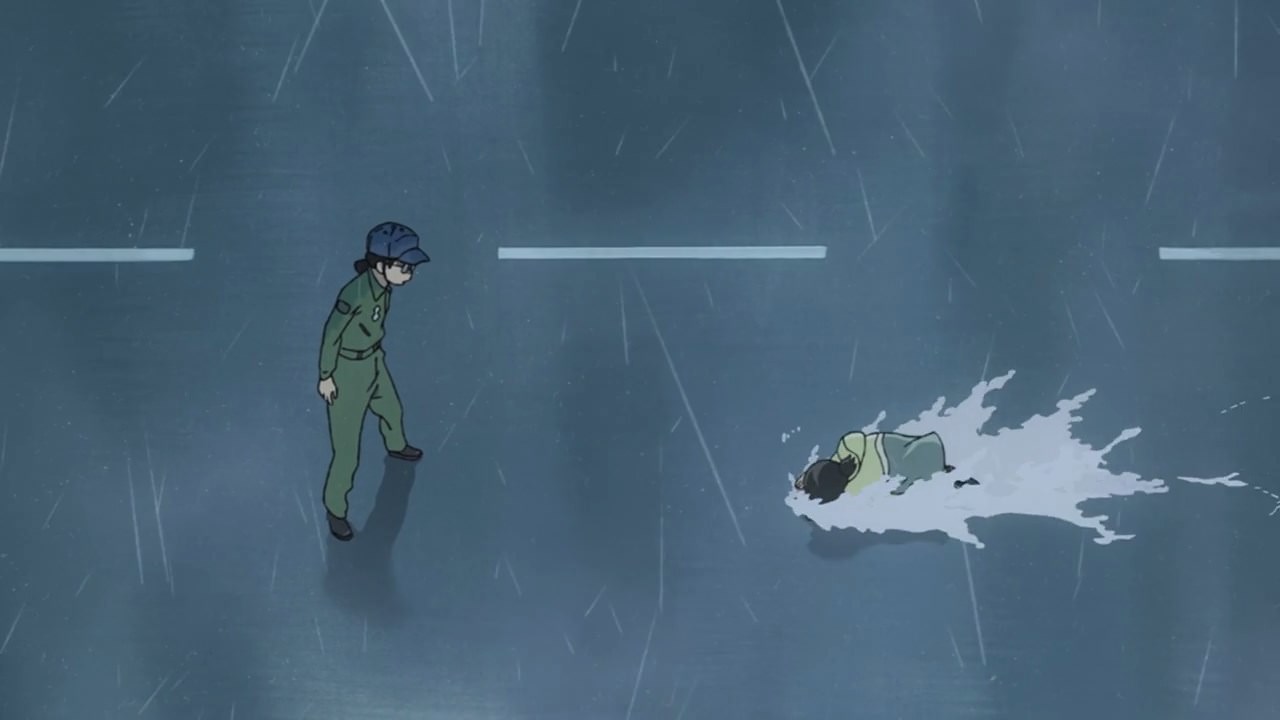 Anyways, let’s go back to Hisone Amakasu where she heard Maso-tan’s voice that Hisone went outside to see her OTF.

However, she encountered the Japan Air Self-Defense Force where Hisone performed a sliding dogeza at Lt. Colonel Remi Kakiyasu. 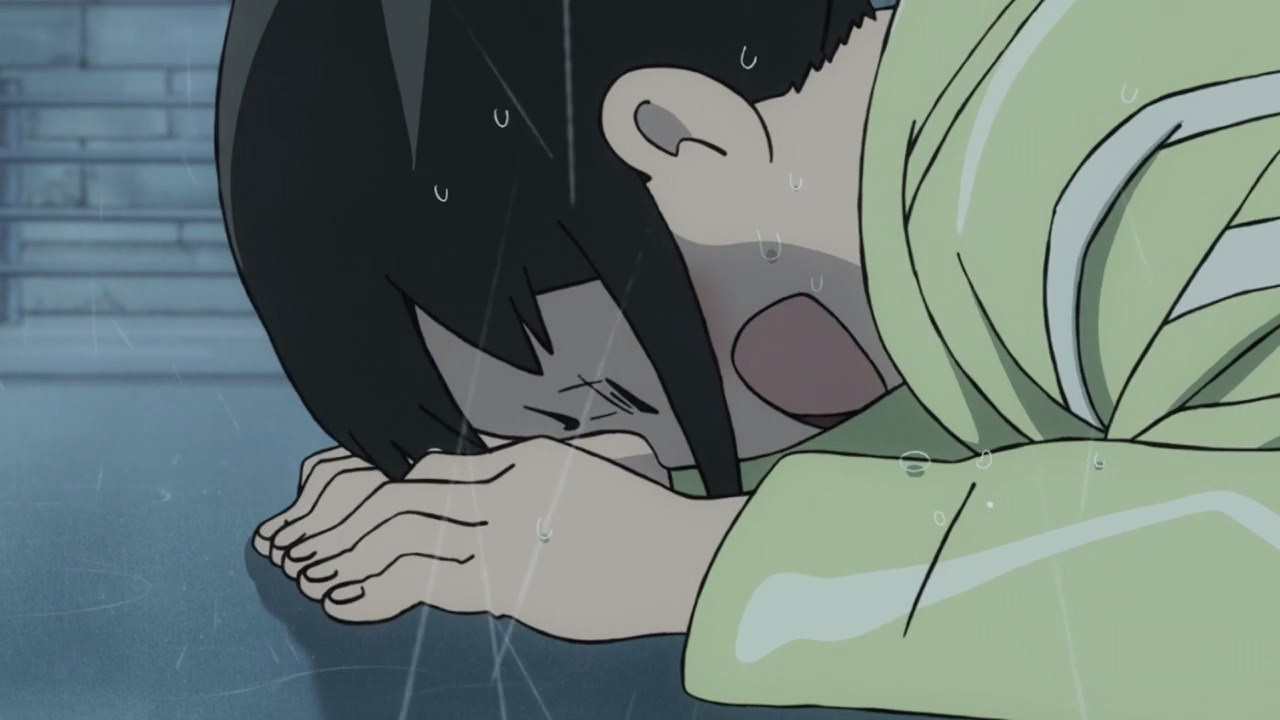 Anyways, Hisone told Lt. Colonel Kakiyasu that even though she’s a trashy human being who has no purpose in life, Amakasu realized that she now has friends to protect like Okonogi and Kaizaki.

It’s all thanks to Maso-tan that Hisone met some people and she told Kakiyasu that Maso-tan is very precious towards her. Well, I have to say that Hisone Amakasu is being honest. Scratch that, she’s very honest to everything! 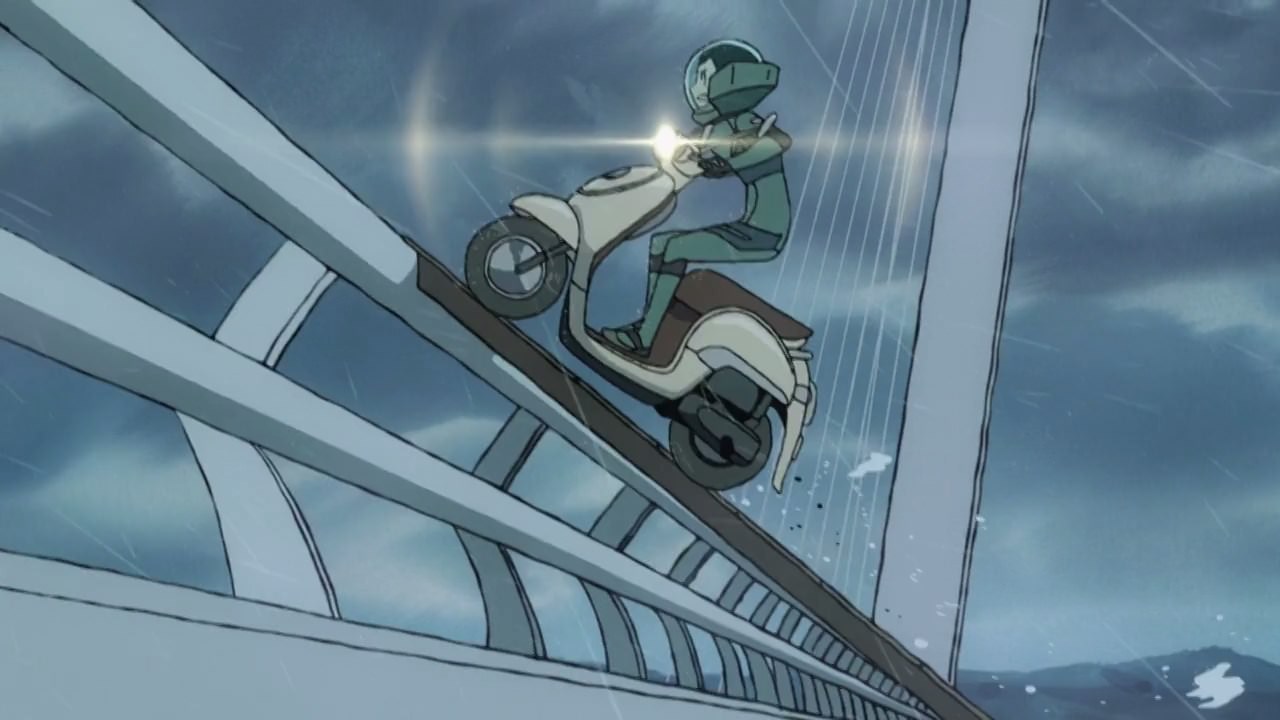 In any case, looks like Lt. Colonel Remi Kakiyasu is convinced that Hisone Amakasu is still worthy as a D-Pilot, although she’s now a civilian rather than a military personnel.

Now then, the only thing that Amakasu can do is to jump off the bridge so that Maso-tan can catch her… 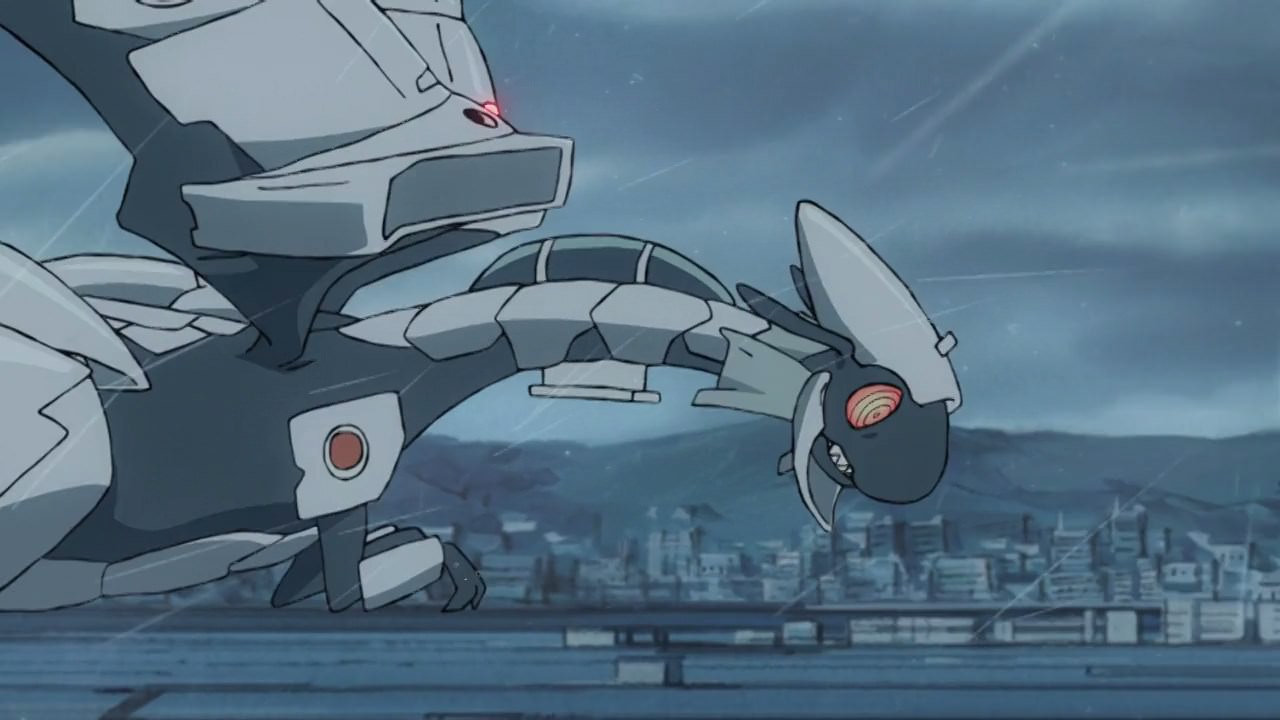 …by eating Hisone of course. Don’t worry, it’s not like Amakasu’s body got chomped in half or anything gruesome! 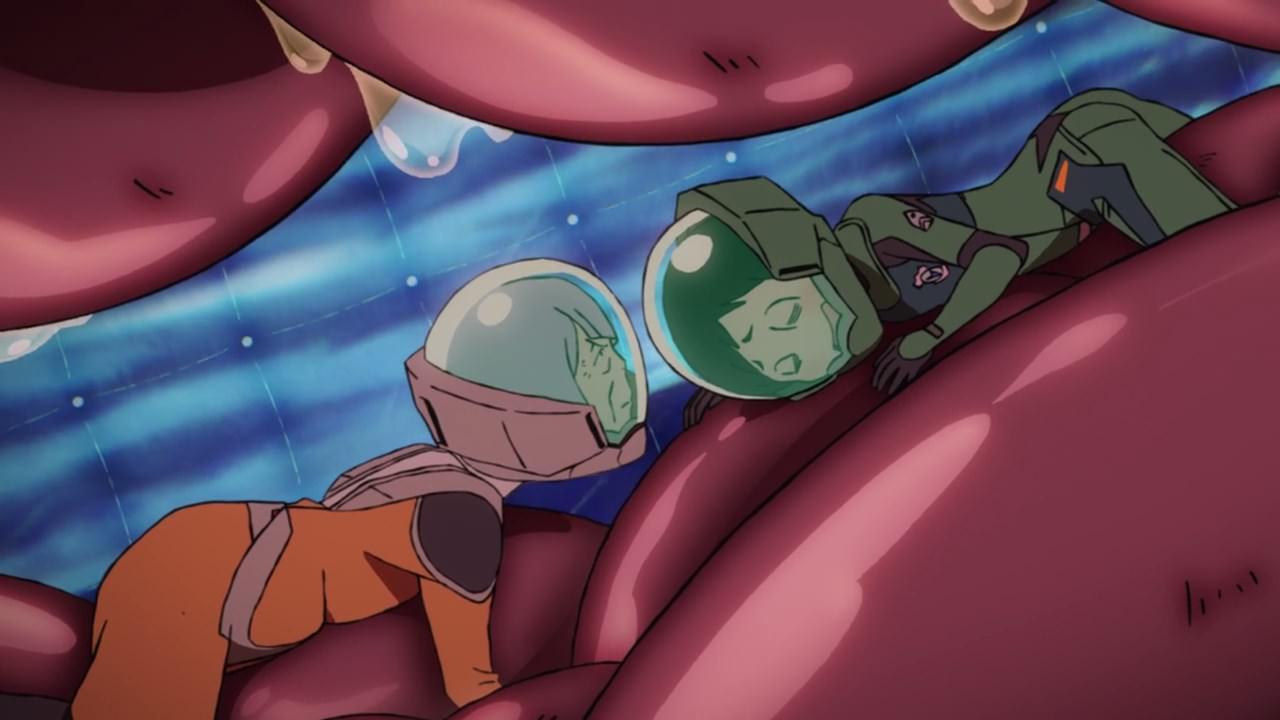 And here’s Hisone Amakasu calming Maso-tan down until the effects of the anastomosis subsides. Glad that Hisone is here to the rescue that Sada Hinomoto is surprised to see a young D-Pilot taming an Organic Transporting Flyer. 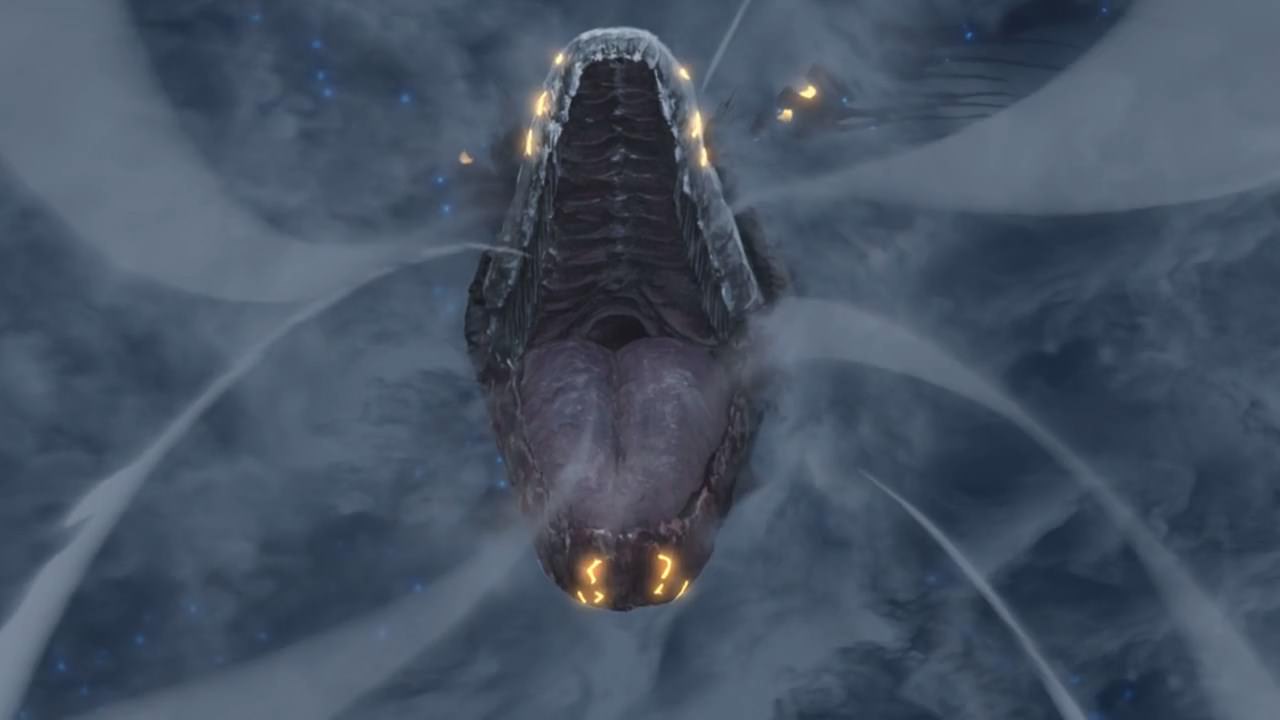 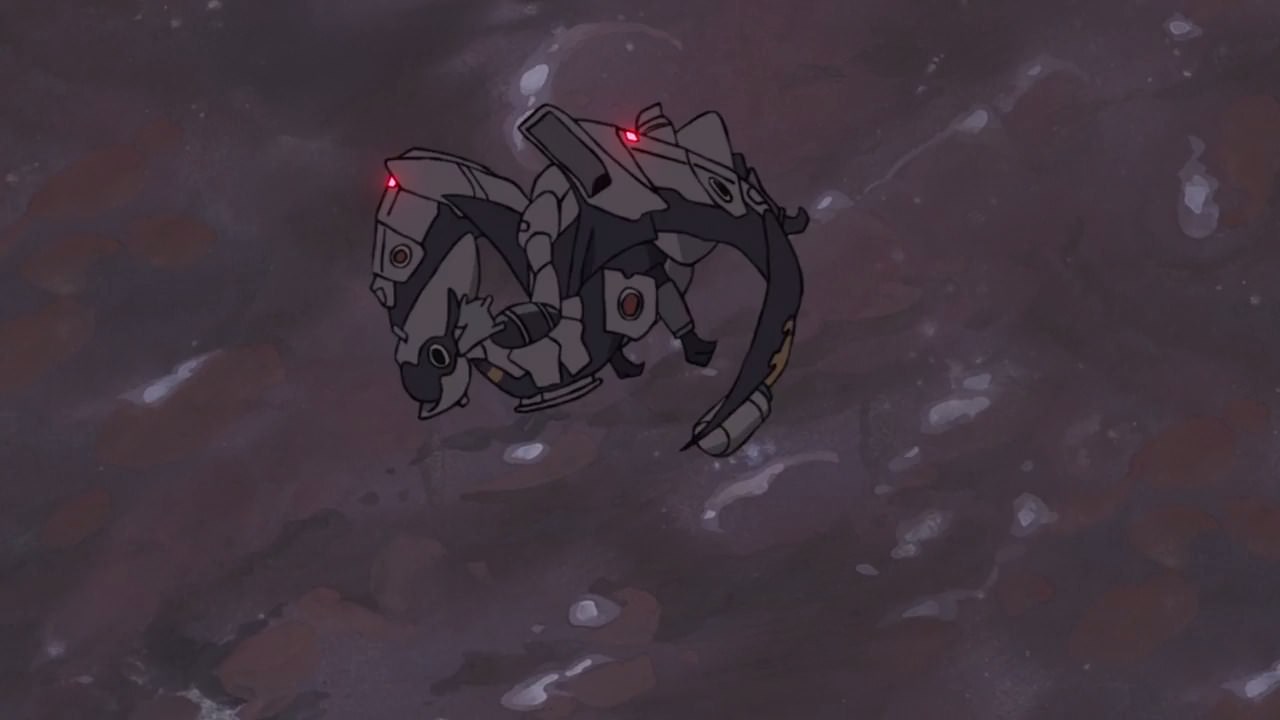 Now then, it’s time for the final stages of the Ritual as the OTFs are swallowed by Mitatsu-sama until they reached to its belly. A big dragon eating up a smaller dragon is so damn wrong! 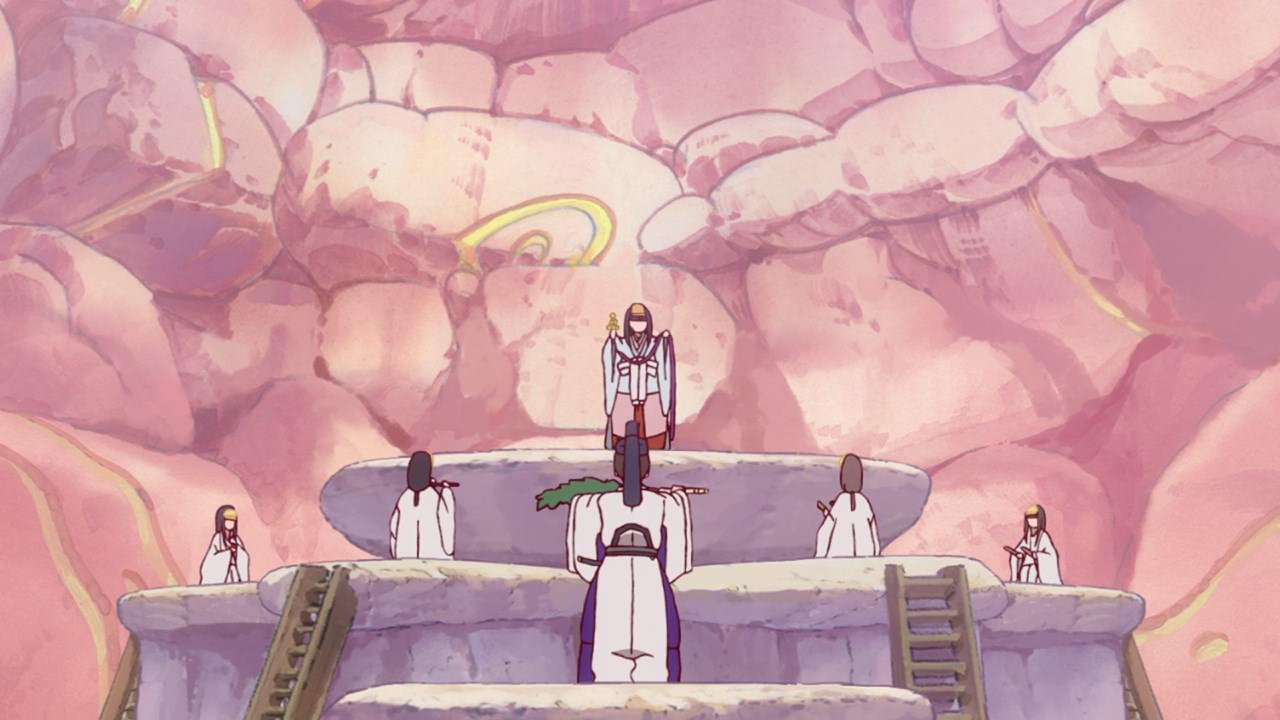 After they reached Mitatsu’s belly, it’s time for the real show to begin with Senior Vice-Steward Haruto Okonogi leading the rites while the shrine maidens perform a lullaby until Mitatsu-sama falls asleep upside-down.

Yup, this is gonna be the most crucial part of the Ritual that it takes dedication to send Mitatsu to its resting place at Fushido island. 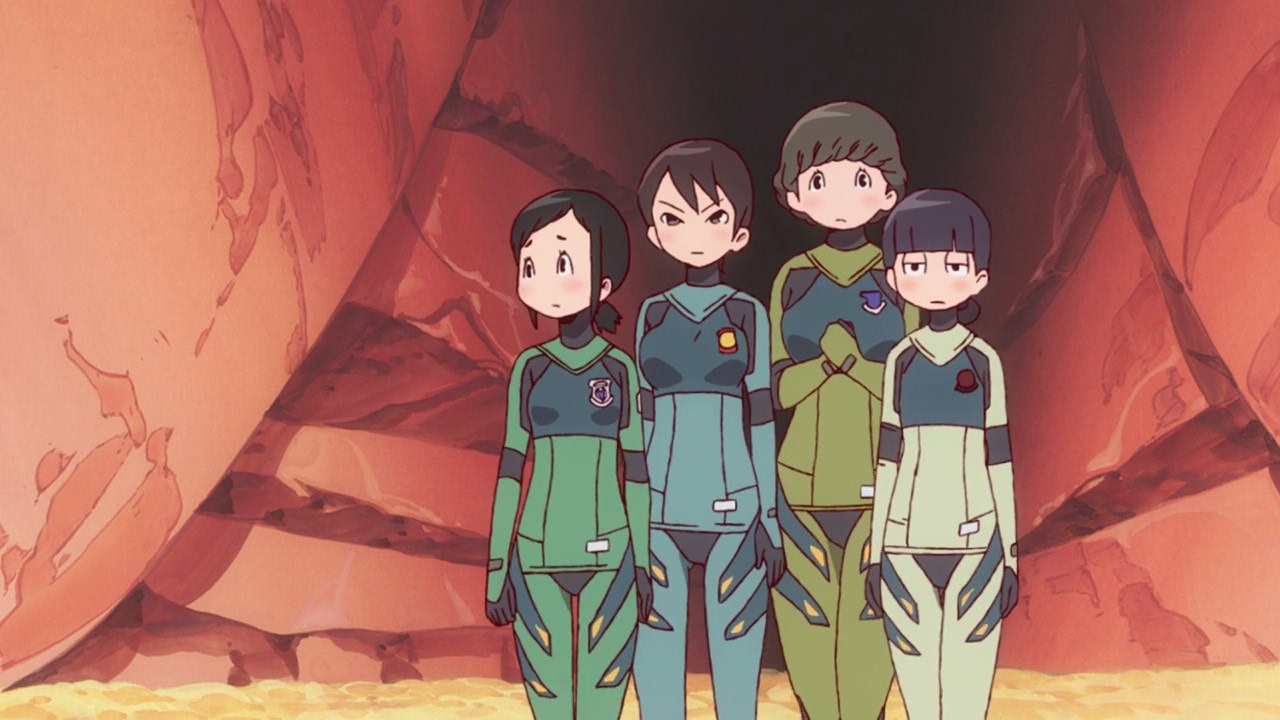 Meanwhile, the D-Pilots are here as they still need to participate in the Ritual inside Mitatsu’s belly. Yeah, it’s not like they’ll act as bodyguards for the entire time. 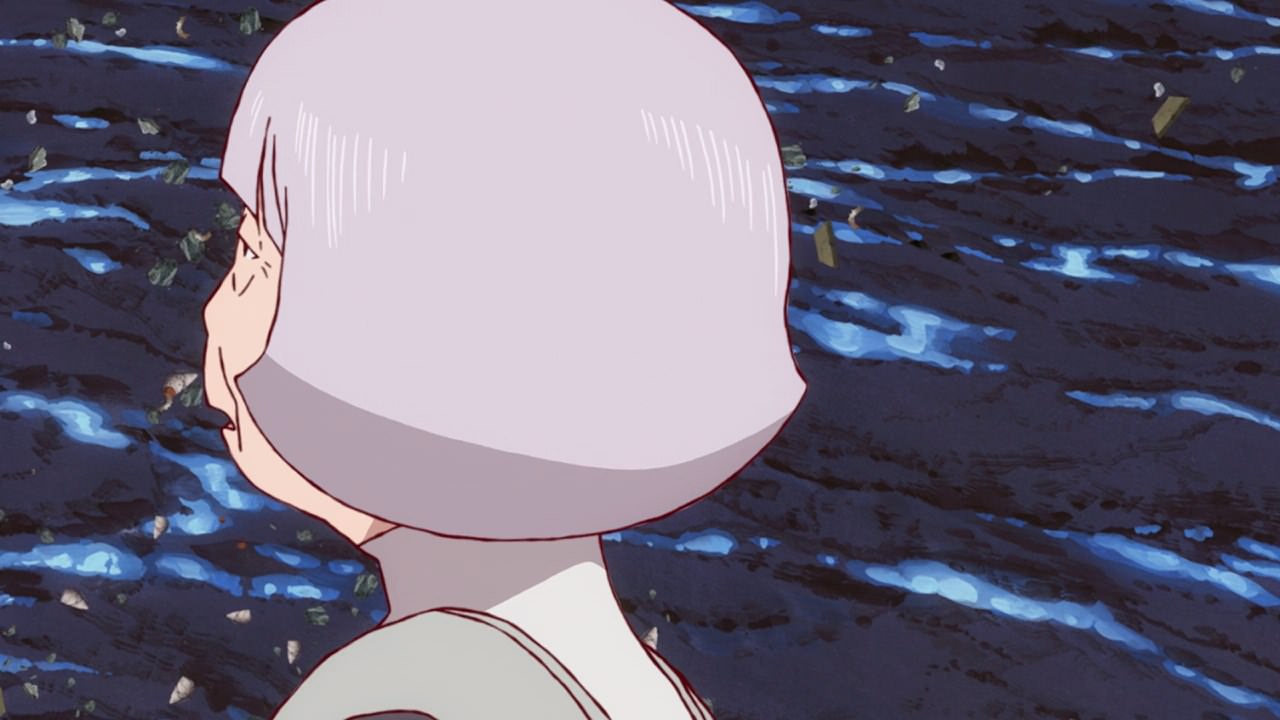 However, it seems that Sada Hinomoto told Hisone Amakasu and the rest regarding the horrible truth of the Ritual.

Sure that a Binden is needed to put Mitatsu-sama to rest and send the deity to its resting place in Fushido, but there’s more to it than meets the eye. 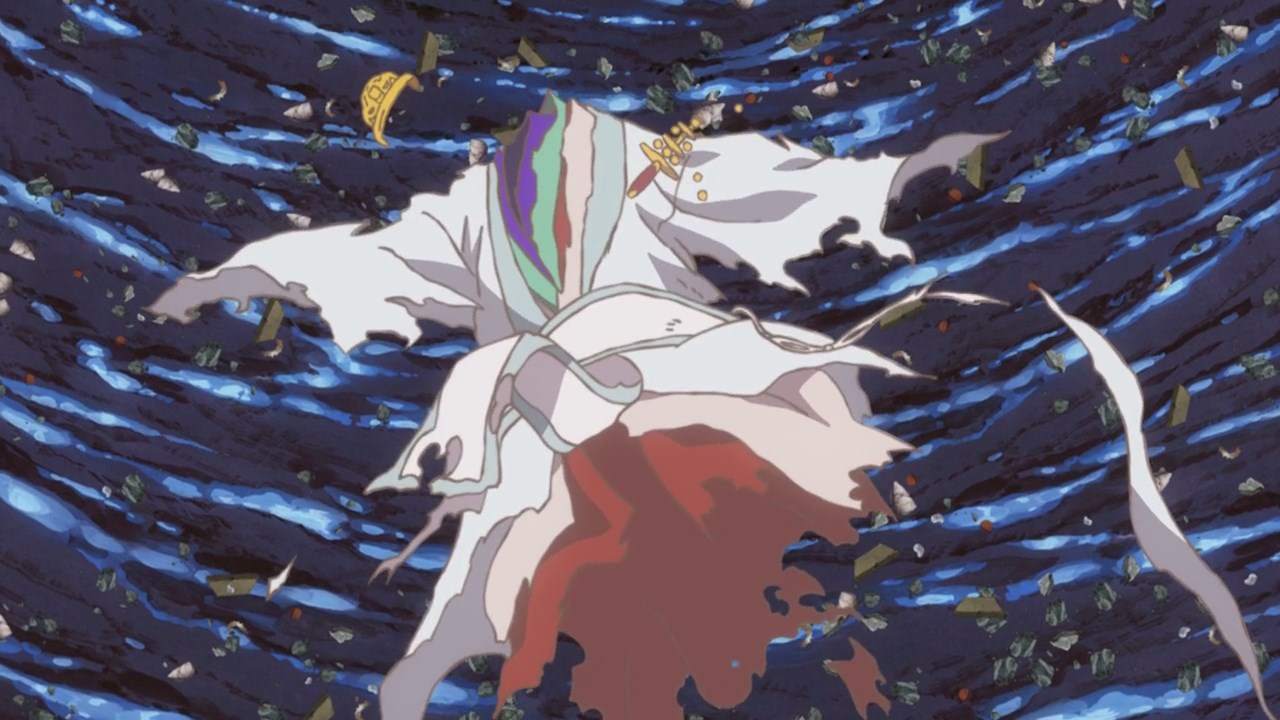 See that torn clothes over there? That’s what remains of Sada’s friend Yae, which means that the Ritual involves around sacrificing one miko in order to put the dragon to sleep. Case in point, it’s the chosen Binden named Natsume Misumi.

Yeah, this series has turned dark for the worst now that it involves killing someone in order for the Ritual to be successful. Then again, is Natsume Misumi is okay about this? I mean, she’s in love with Haruto Okonogi that Natsume won’t have a chance to fully-convey her feelings towards him. As for Hisone Amakasu, I have to say that she changed a lot ever since she met Maso-tan, but I think she and her D-Pilots will have to find another way to put Mitatsu-sama to its resting place without sacrificing anyone.

Well then, looks like I’m done watching this week’s episode and now I’m looking forward for the last episode!