Darling in the FranXX Episode #24 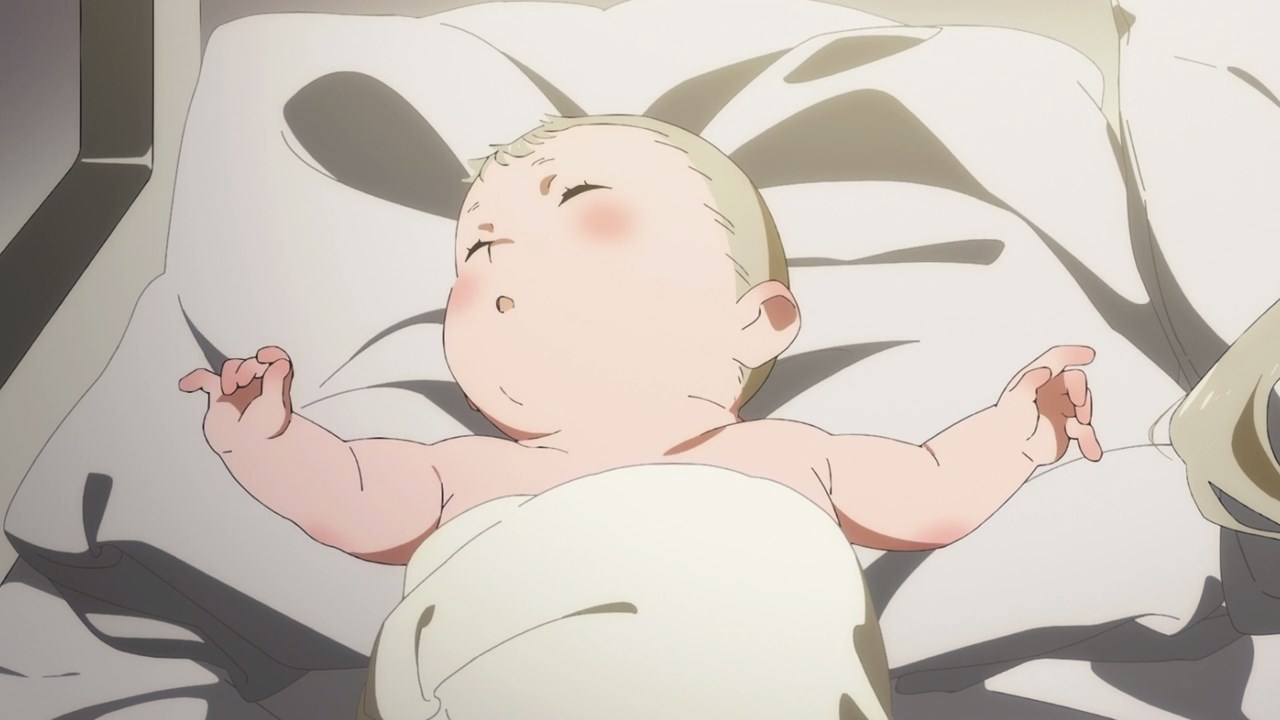 Well everyone, seems that a few years have passed since Hiro and Zero-Two left the stars to fight against VIRM.

And look what we have here! Looks like Mitsuru and Kokoro got a baby girl named Ai, which is fitting for that name because she was born from the love between these two former parasites. 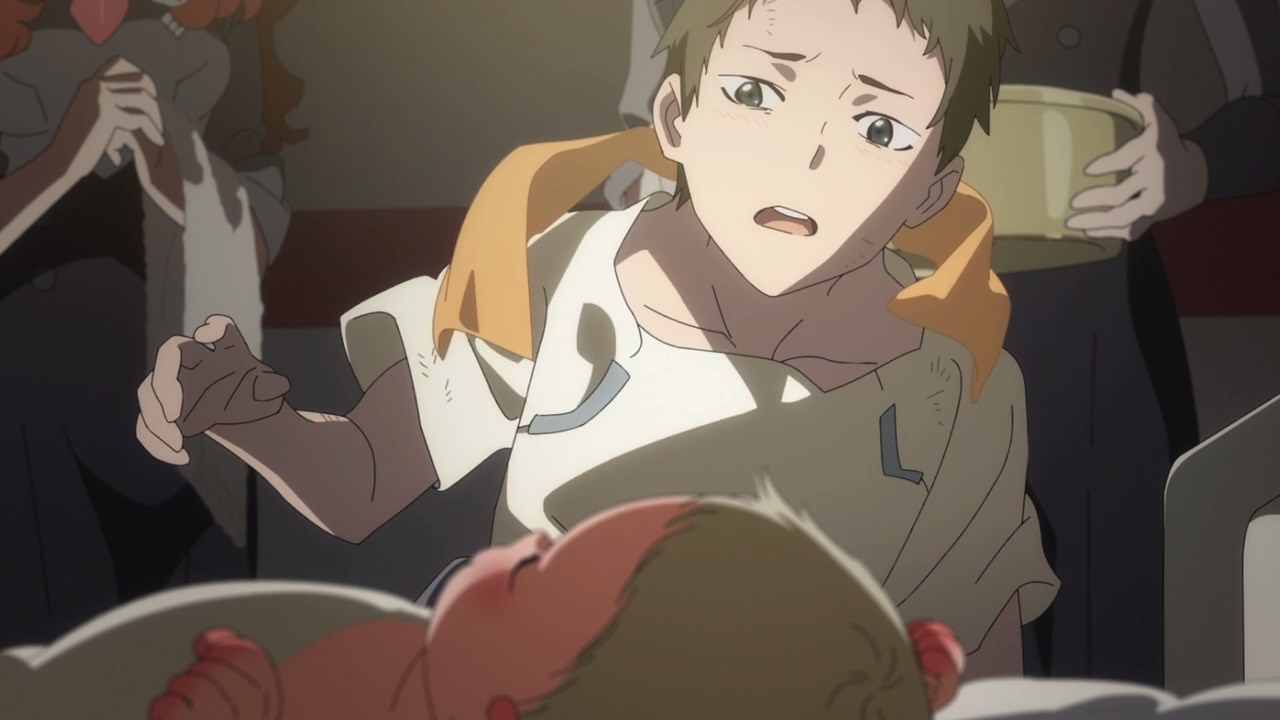 For Mitsuru, it seems that he’s overjoyed that he’ll become the father of Ai-chan. Aww, isn’t it cute? 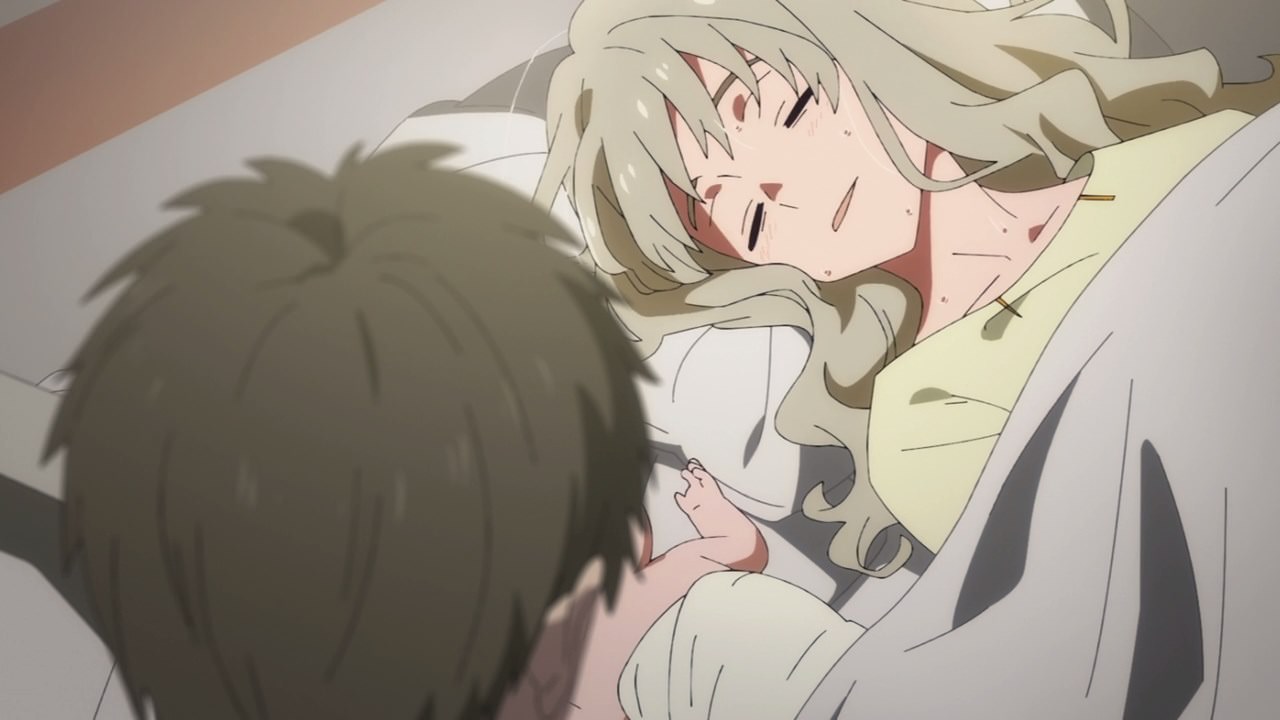 Same thing goes with Kokoro as she’s happy to have her first-born child. It was truly a remarkable breakthrough for the future of humanity! 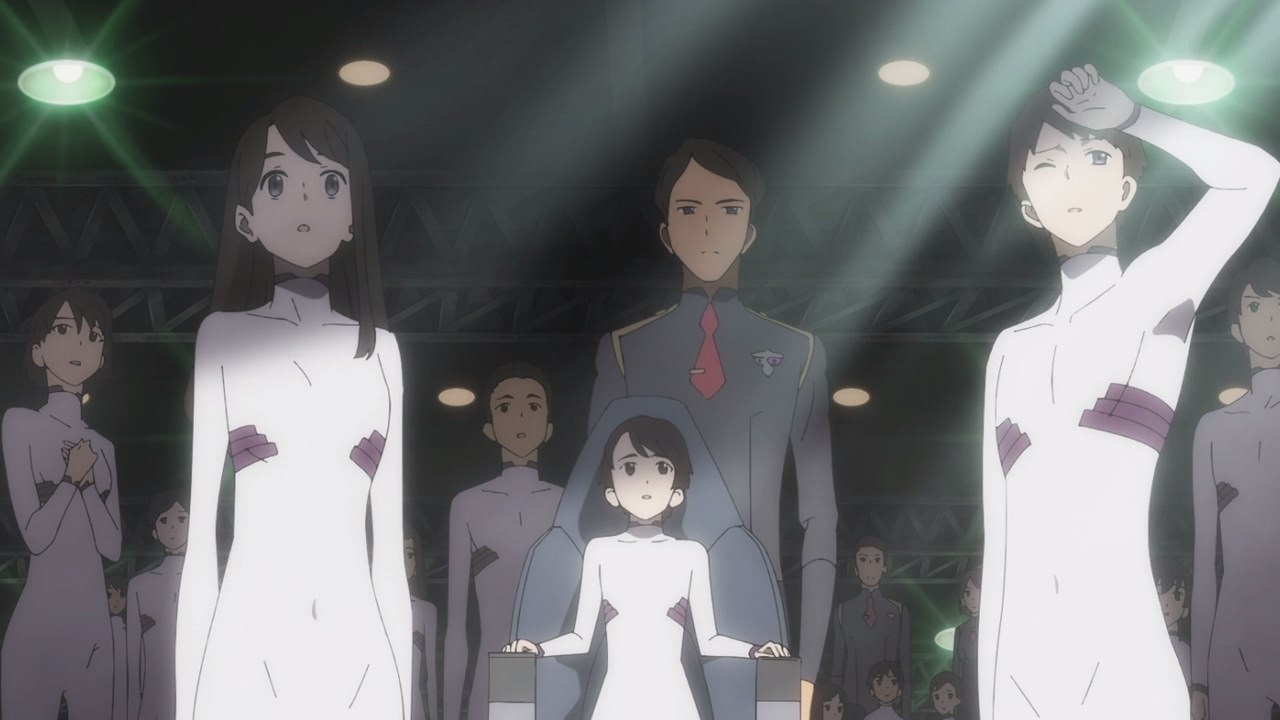 Meanwhile, looks like we have some good news as Nana, Hachi, and the rest of the surviving adults found more parasites who was supposedly disappeared but it appears that Dr. Franxx put them in cryostasis.

But now, seems that they finally woke up from their deep slumber as they’re now living their new lives of rebuilding human civilization instead of fighting against the klaxosaurs. 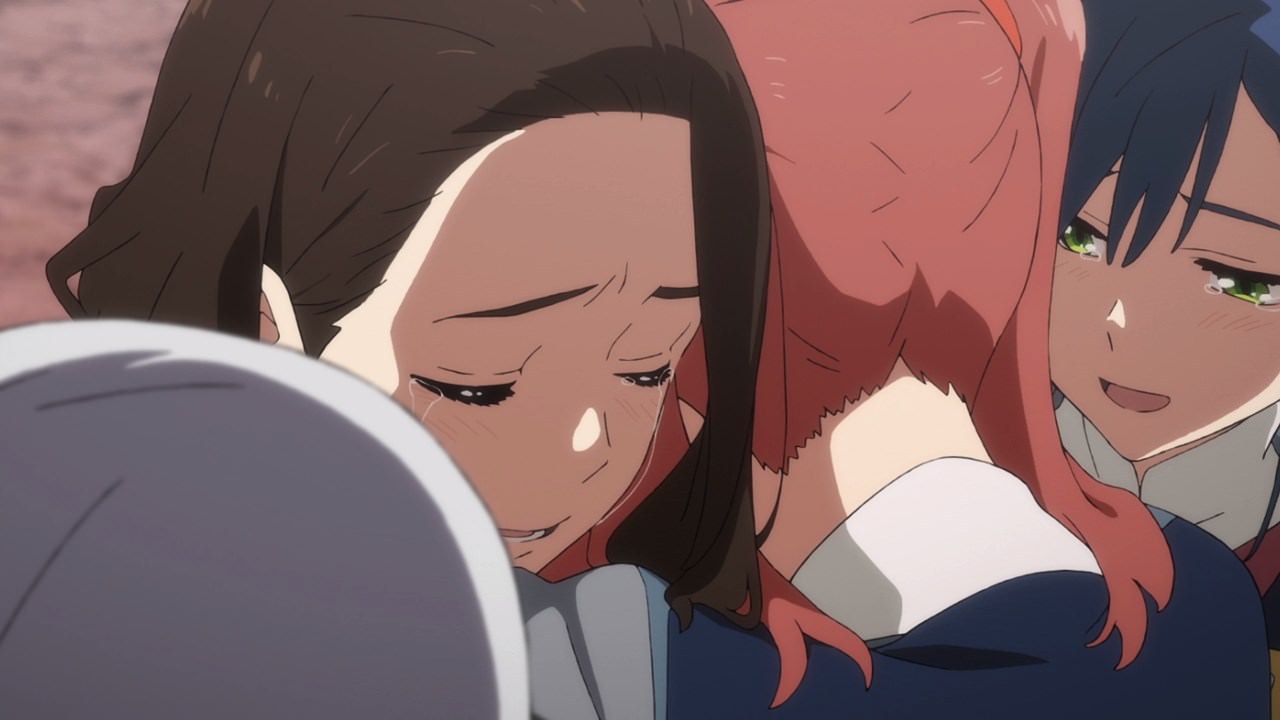 This includes Code:703 “Naomi” who was originally the partner of Code:016 “Hiro”, but it seems that she was cast away in favor of Code:002 “Zero-Two”.

By the way, this is the time that I’ll stop using the code designation from here on out because really, they’re no longer soldiers anymore. 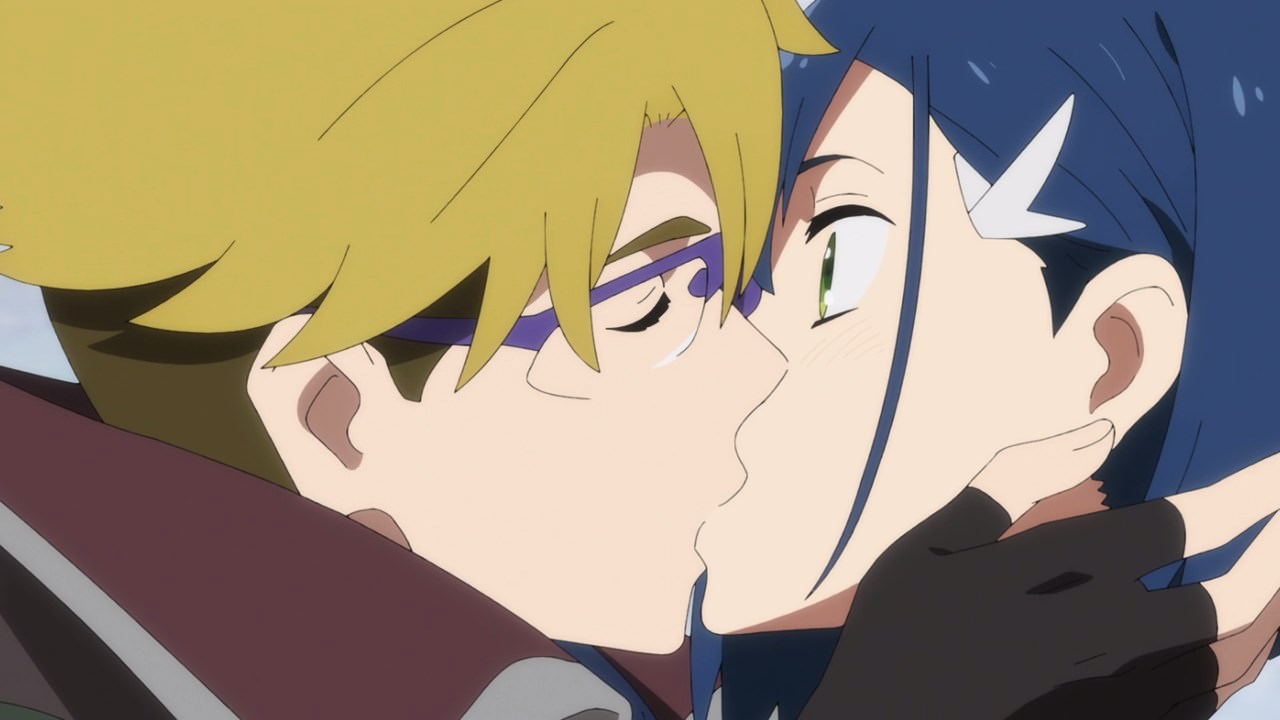 Lastly, it’s time for some last-minute hookups as we have Goro kissing Ichigo in the lips as he goes on an adventure to find remaining minerals other than magma energy, plus some parasites in order to reconstruct civilization for the future of Earth and the remaining human population.

Yeah, I’m glad that Goro has managed to stick with Ichigo after she’s trying to become Hiro’s lover throughout the series. But you know what, Ichigo already move onto better things as she becomes Goro’s girlfriend. Still, it would be nice if Hiro and Zero-Two are here on Earth… 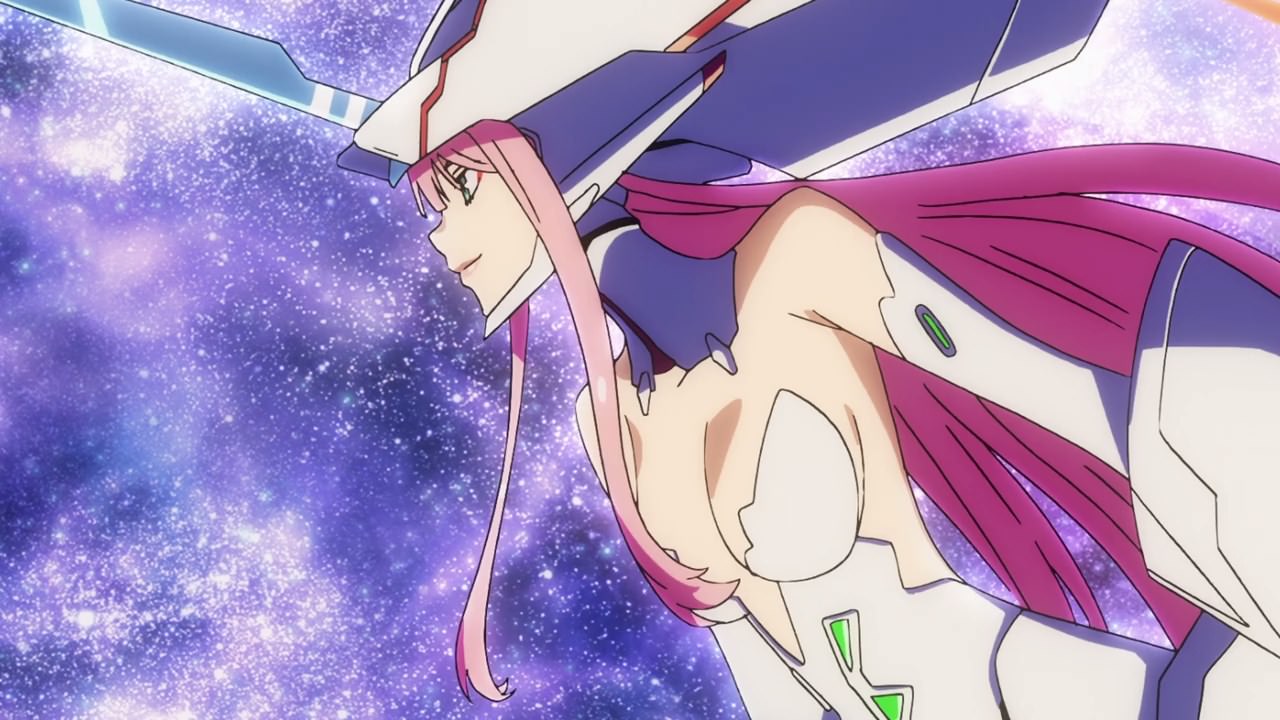 However, both Hiro and Zero-Two needs to destroy VIRM once and for all as Strelizia True Apath is now inside the enemy territory. 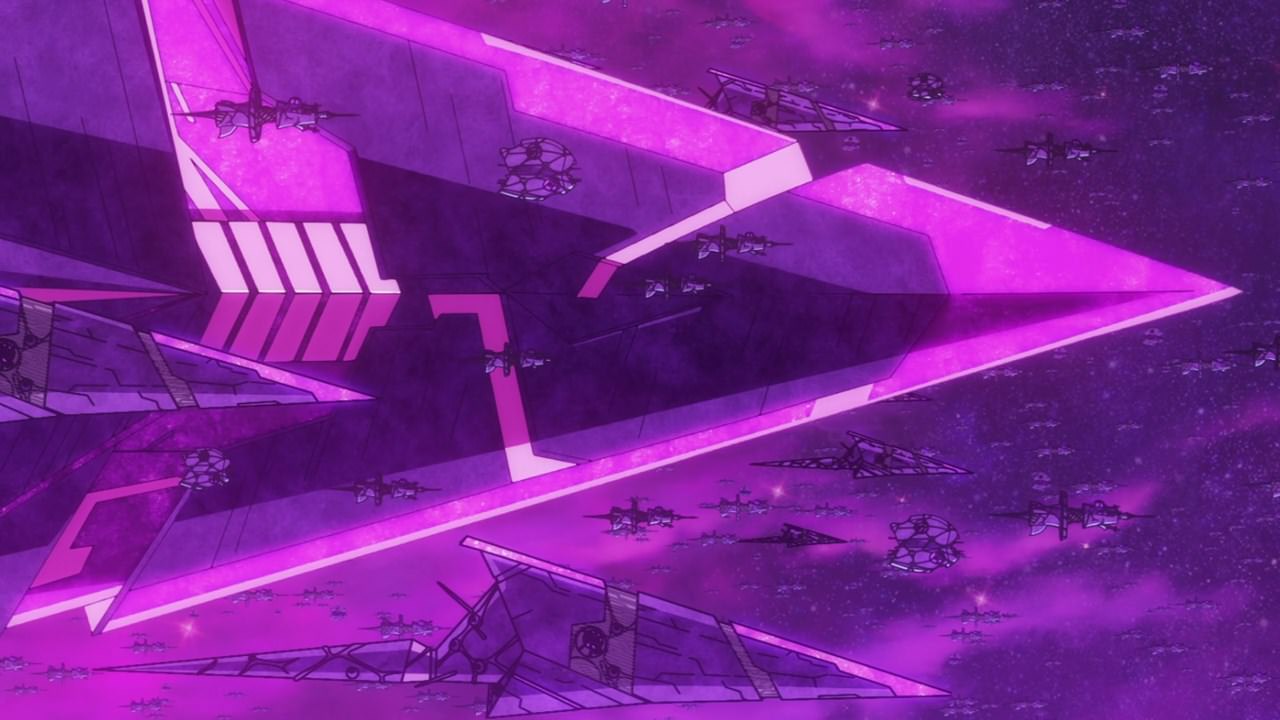 And as for VIRM, seems that they managed to reverse-engineer Hringhorni in such a short time that they send dozens of spears towards Strelizia True Apath. 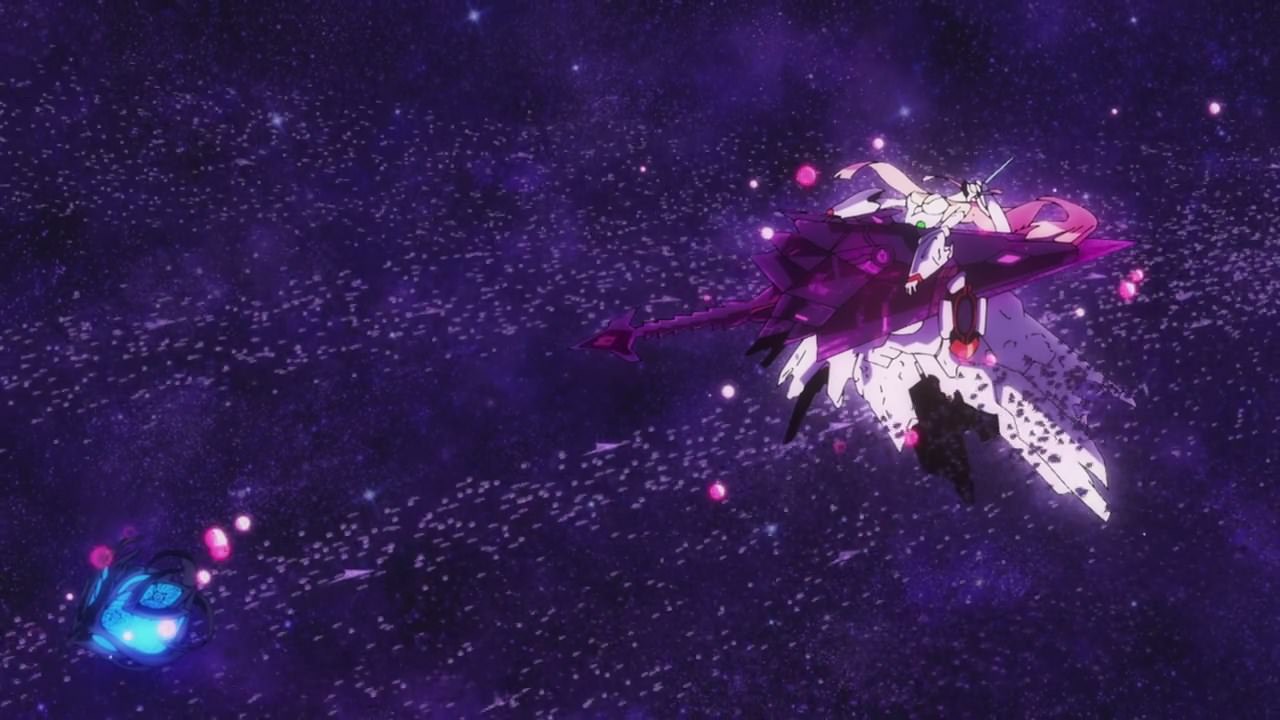 And look, seems that VIRM delivered a devastating hit towards Strelizia True Apath. Even worse is that Hiro lost consciousness, which is not good for Zero-Two because without him, their final attack will end in failure. 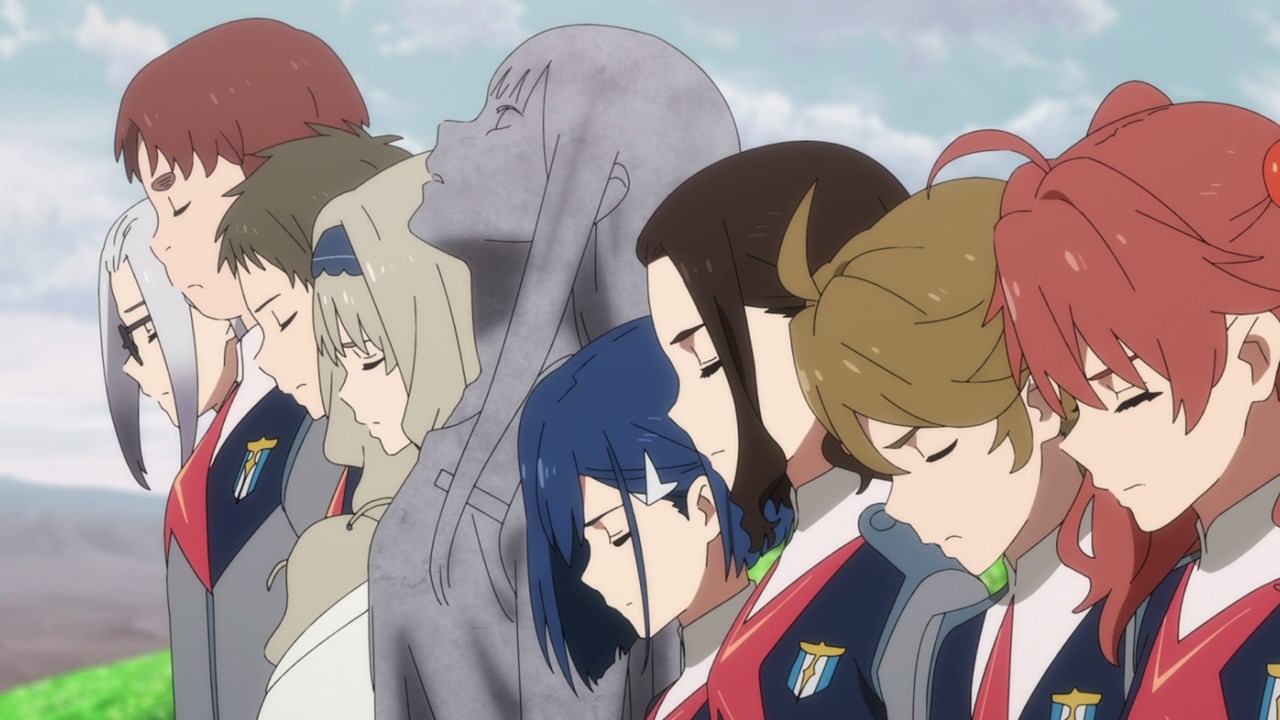 But, there’s still hope as everyone rallied and gave their energy to both Hiro and Zero-Two. Now, the only thing left to do is for Hiro to regain consciousness!

Fortunately, Zero-Two managed to bring Hiro back from the brink of death as she told her darling that everyone is cheering him on to return and fight the enemy together. After all, two birds are better than one when facing VIRM!

With that said, Zero-Two gave Hiro the all-important kiss of life, just to wake him up from losing his consciousness forever. 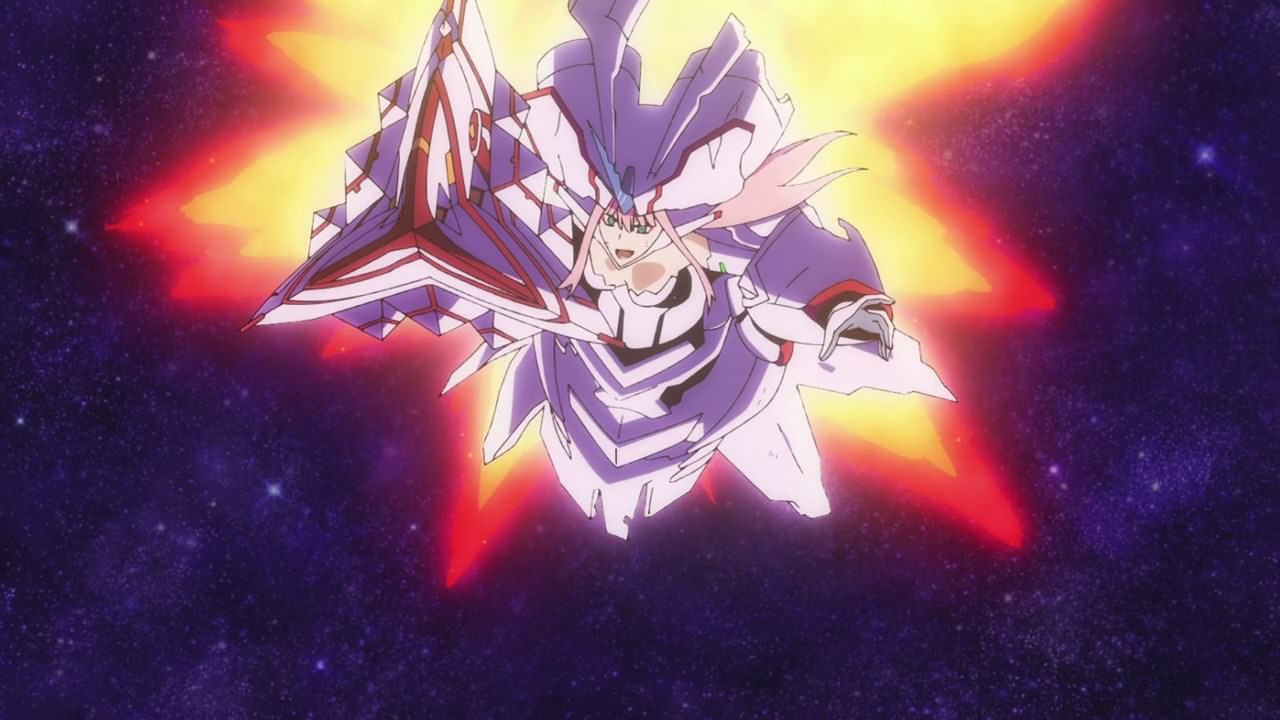 And once Hiro returned, it seems that Strelizia True Apath not only got its groove back but the giant FranXX got its spear Hringhorni back.

Still, I wonder if this is the original Hringhorni or it’s just a clone? 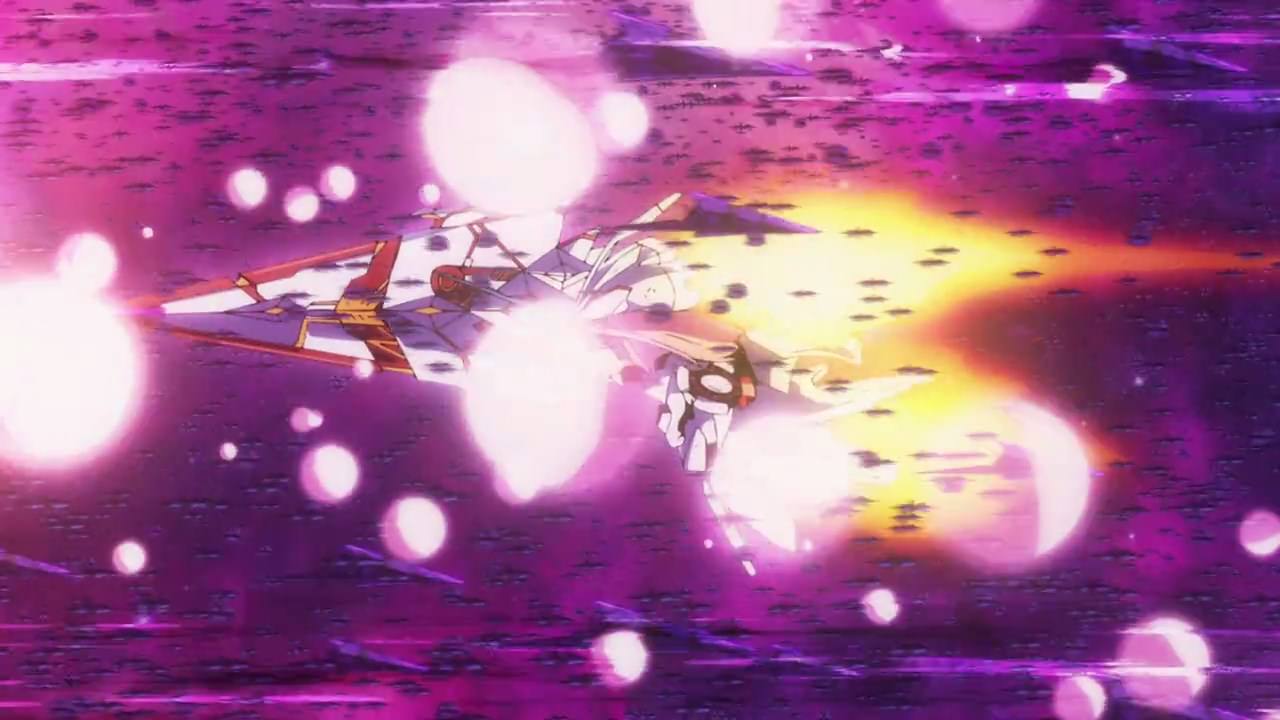 Whatever it is, Hiro and Zero-Two will finish the fight once and for all against VIRM. C’mon, it’s all or nothing! 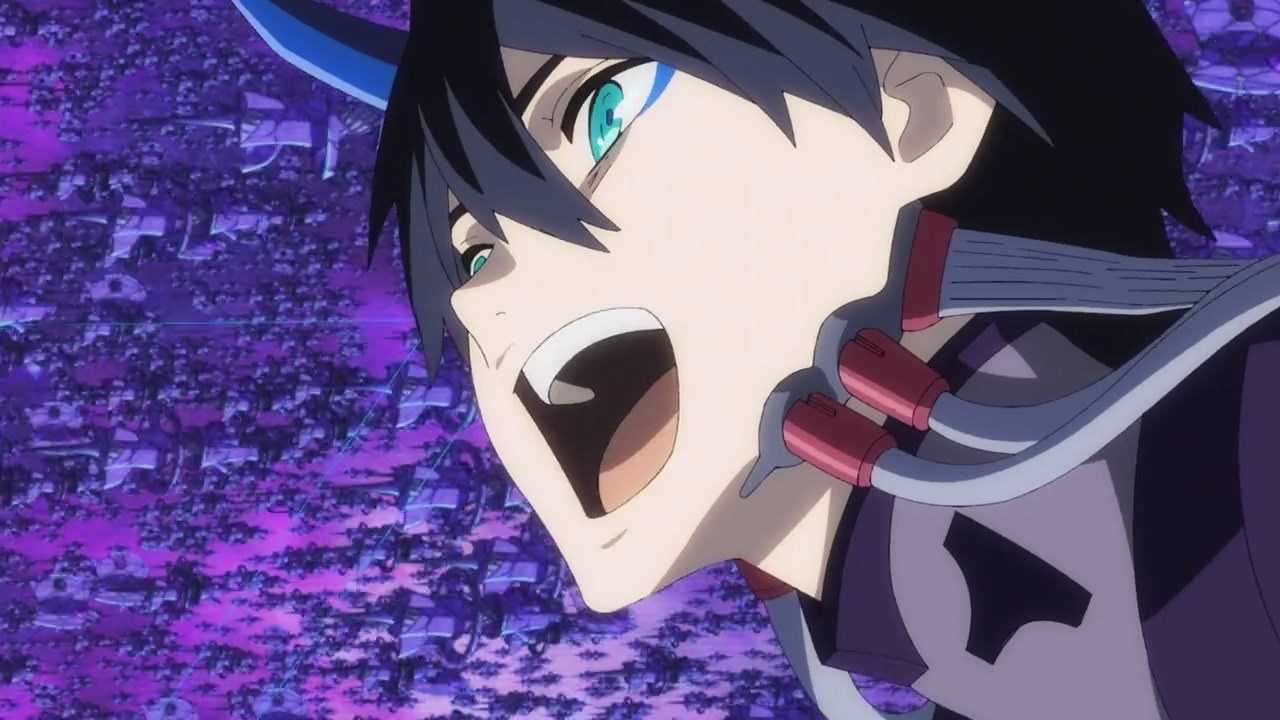 For Hiro, he’s happy to be with Zero-Two until the end because they’re unstoppable. Let’s hope that Hiro and Zero-Two returned to Earth… 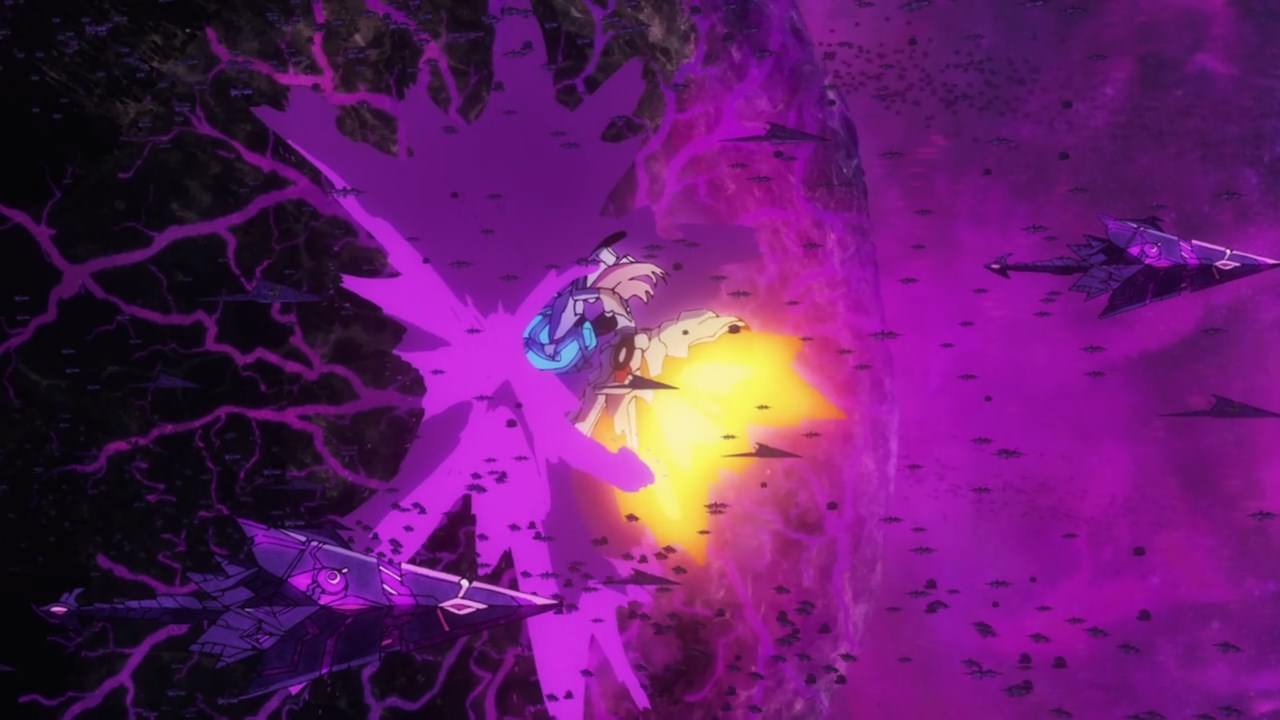 …once they planted the bomb towards VIRM’s home planet. Then again, I have a feeling that there’s no turning back on this final attack against a malevolent hive mind. 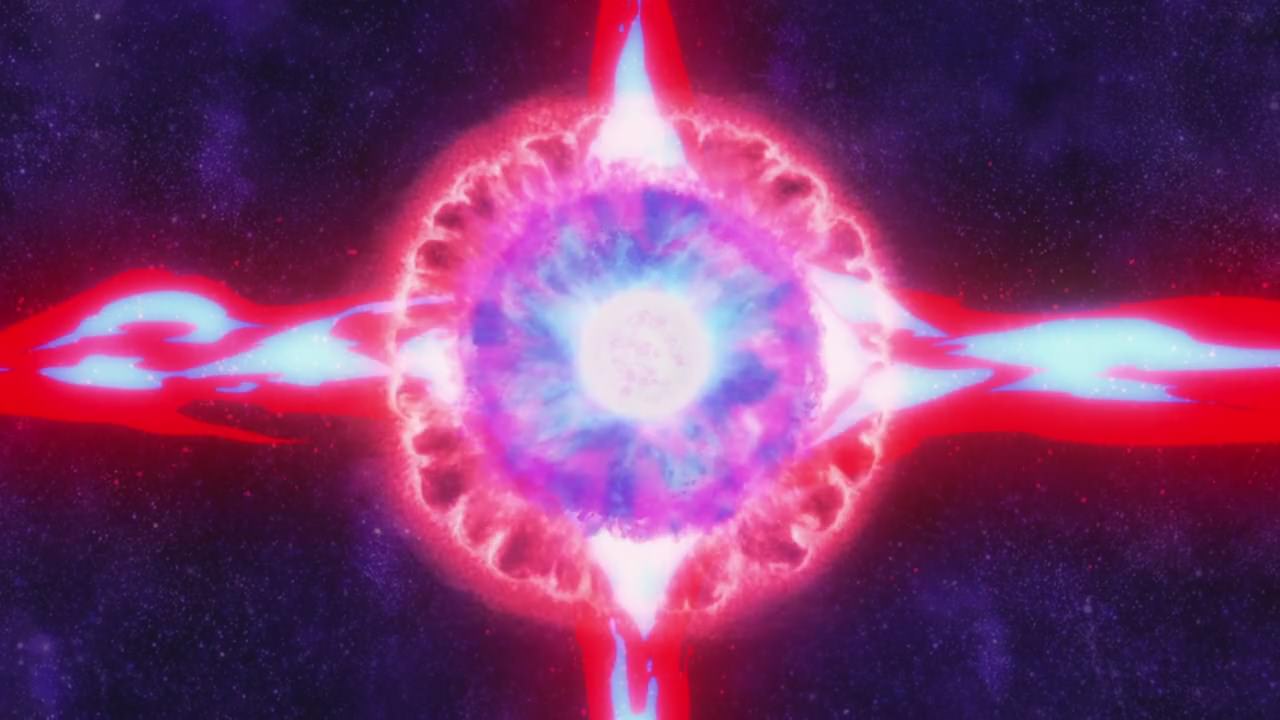 With that said, the bomb exploded as VIRM’s home planet is destroyed. Of course, VIRM is still around but unfortunately, it’ll be a long time for them to recover until they’re ready to destroy what’s left of humanity and the klaxosaurs.

As for the klaxosaurs (or klaxo sapiens), they returned to Earth where they became part of the planet. I mean, they need to rebuild Earth after VIRM siphoned all of its resources. However, there’s some sad news as both Hiro and Zero-Two died, but their spirit lives on as they’ll see their friends rebuild their home planet. 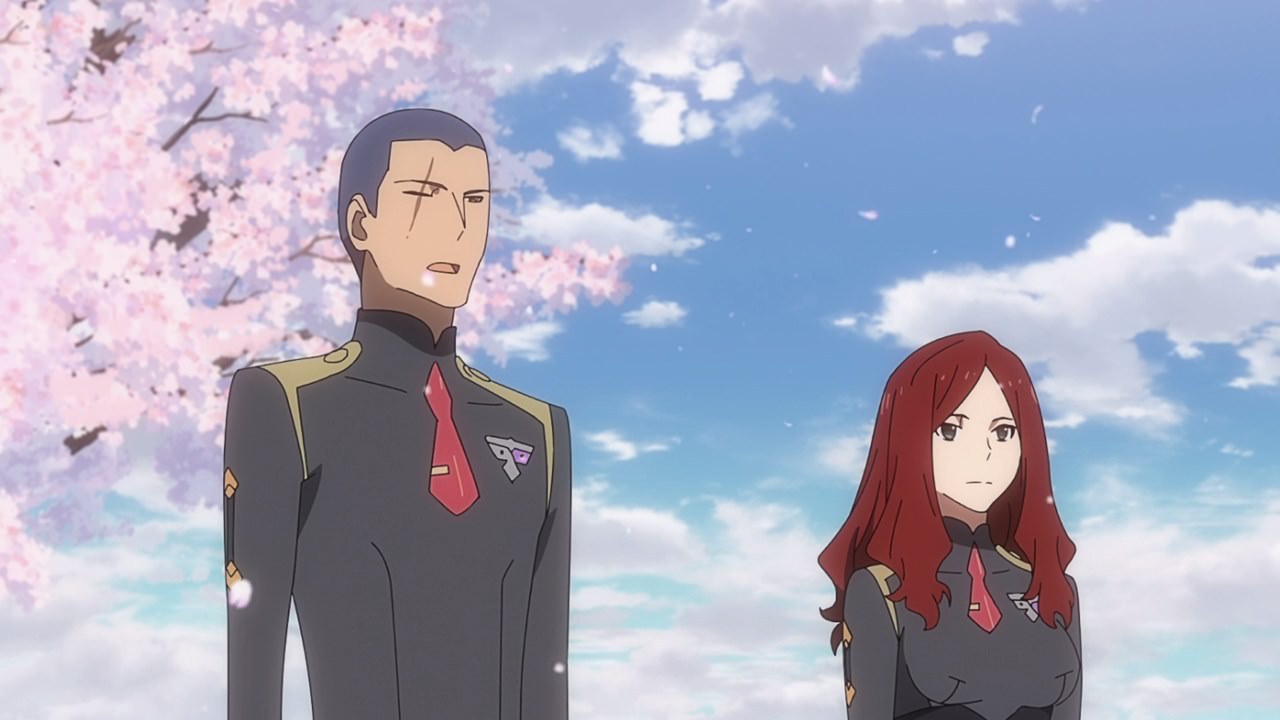 And now, time for the epilogue as humanity restored civilization thanks to the guidance of both Hachi and Nana.

Unfortunately, seems that they’re only ones left as most of their fellow immortal adults simply disappeared, including the new Nana. Still, both Hachi and Nana changed a lot and really, their role of guiding the parasites to rebuild Earth was so significant that they should give a reward for their efforts. 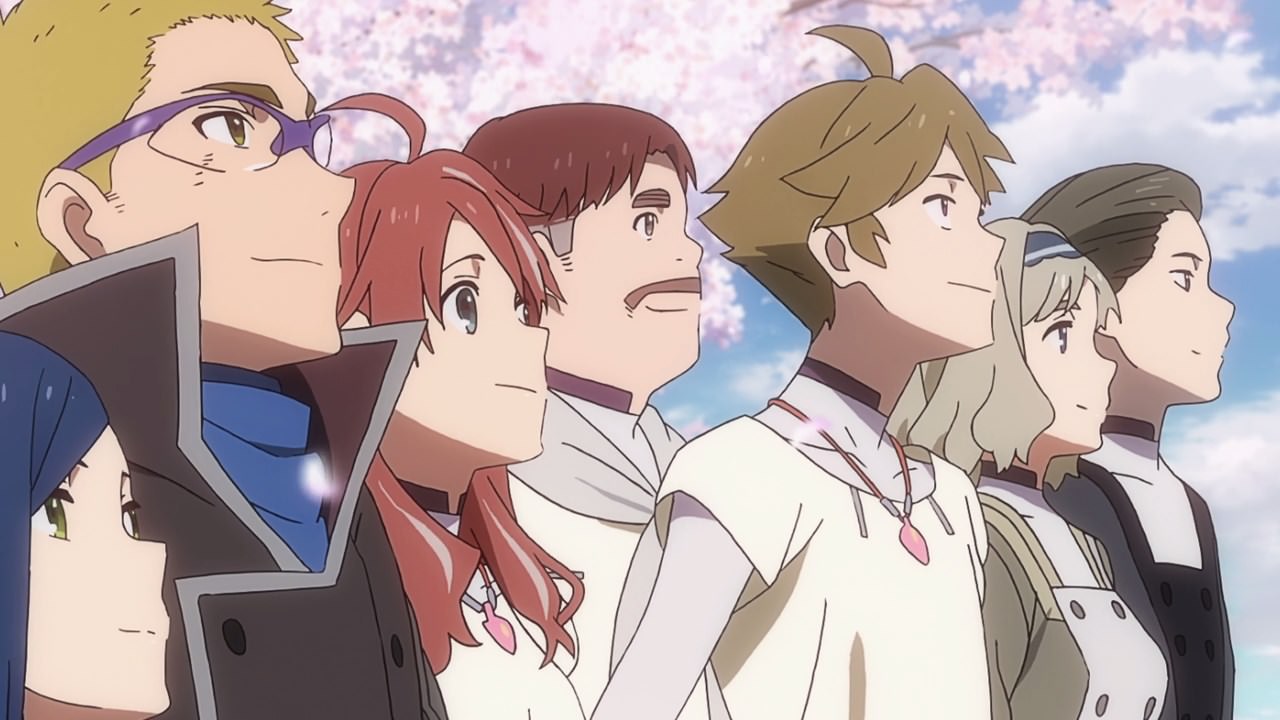 As for the former parasites, they become proper adults after many years with Goro and Ichigo expecting their first-born child in the future, while Mitsuru and Kokoro’s family are growing with their fourth child coming soon.

I have to admit that everything changed since Zero-Two came to their lives and with the help of Hiro as he gave them names, their lives are now peaceful as they’ll become responsible for the future of Earth. Well, the most significant change that I saw is Mitsuru whose life was turned from a cynical child who lost faith in Hiro (due to his mind being wiped clean) to a lovable and respectable man to both Kokoro and his children.

Others like Futoshi and Zorome changed a bit, although the question is whether the latter have hooked up with Miku or not. As for Futoshi, I think he finally moved on to become the best baker in the entire Earth. Just kidding, but I’m hoping that he got a wife to keep Futoshi company. 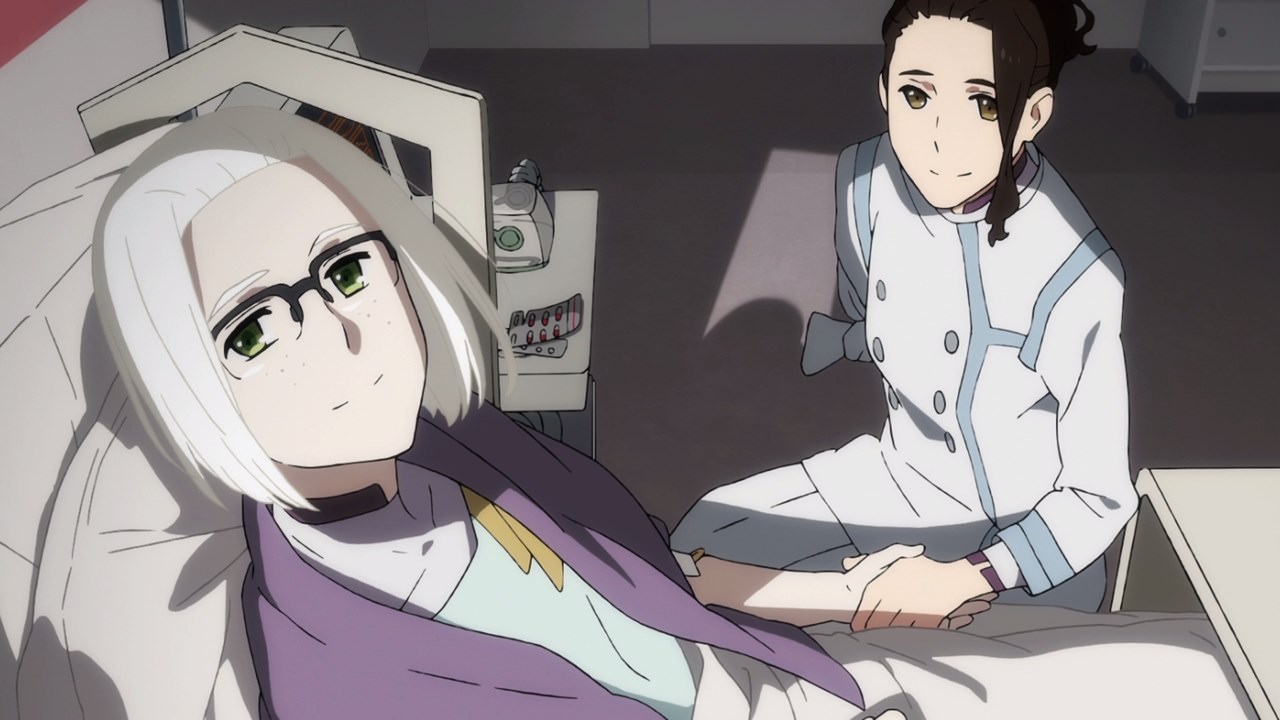 Also, here’s Ikuno as she spends her remaining life with Naomi. Of course, her life will not end in vain as it turns out that Ikuno is responsible for finding a permanent cure to the rapid aging of all the parasites, as well as healthcare for pregnant woman so that they can deliver the baby safe and sound.

Yes, I must say that we’re gonna miss Ikuno and while her love towards Ichigo will remain unrequited, at least she can die happily in peace with Naomi at her side. 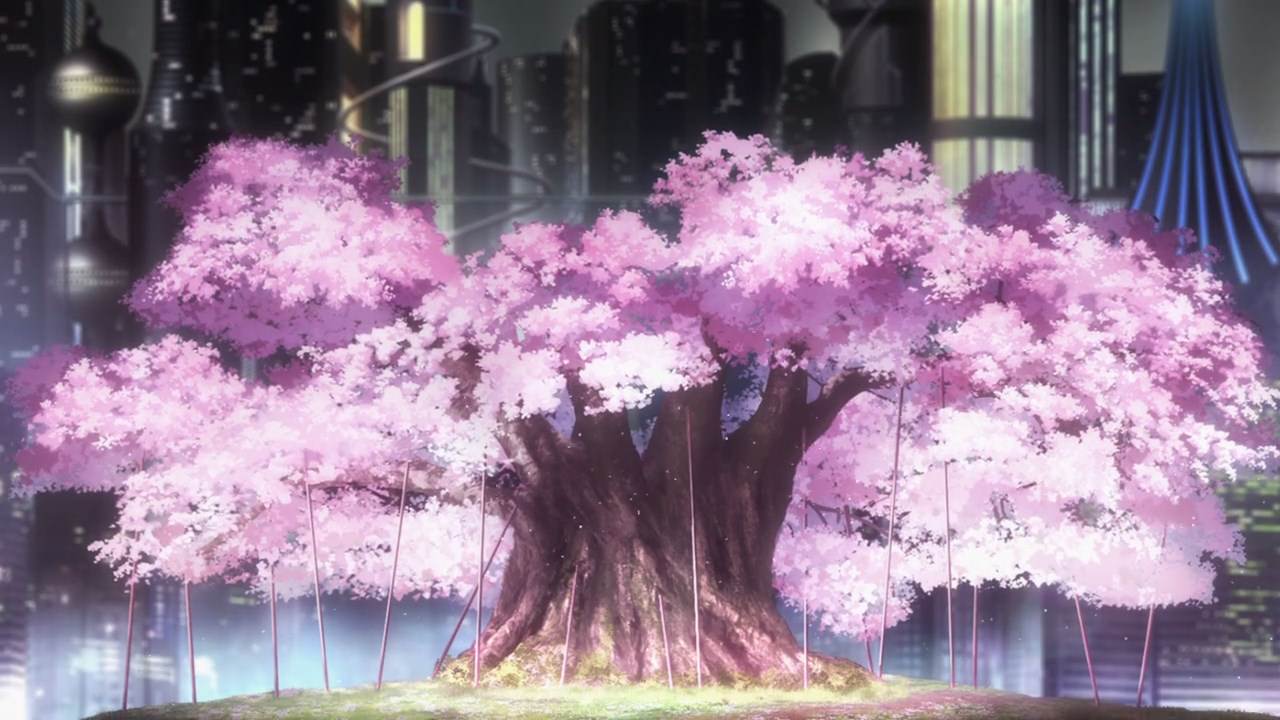 And with that, let’s end this series with the shot of a cherry blossom tree as Darling in the FranXX not with a whimper, but with a bang as Earth and humanity’s future is secured.

Well, I must say that even though it’s not the perfect show to watch due to some inconsistencies here and there despite having great animation, at least there’s light at the end of the tunnel for Plantation 13’s FranXX Team and the rest of the former parasites as they’re living peacefully.

Sadly, the remaining members of Plantation 13 have passed away as they never got to see the return of both Hiro and Zero-Two. 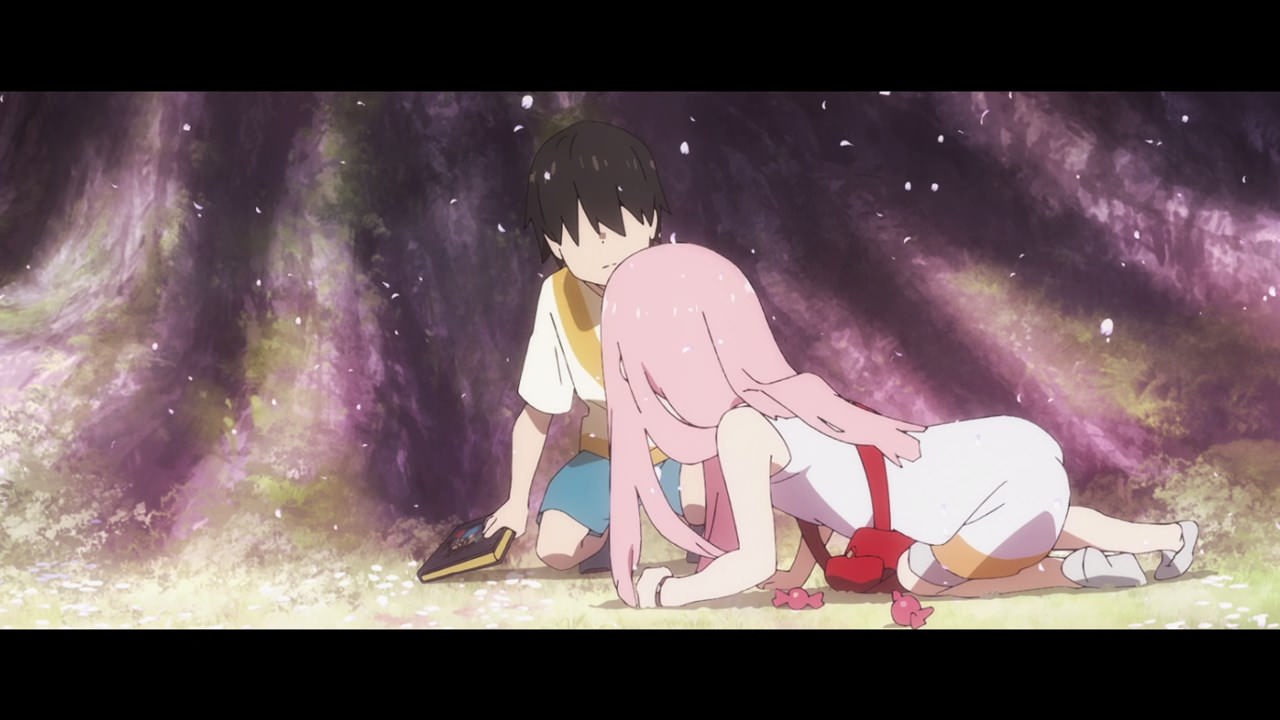 Then again, seems that both Hiro and Zero-Two have returned in another form as their bond will begin anew on this new peaceful era.

Anyways, that’s about it for Darling in the FranXX! Good night everyone!