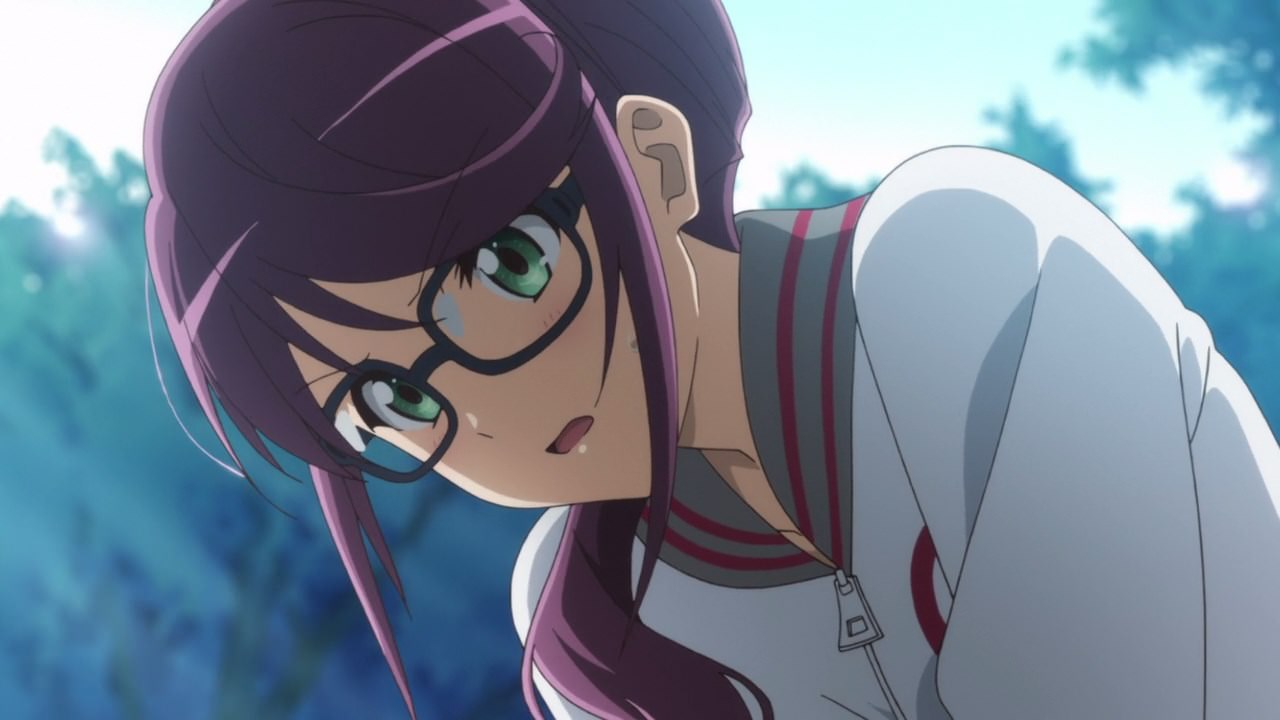 This is Junna Hoshimi and you probably remember her from last week’s episode as she lost to Karen Aijou back in Episode 1.

Of course, it’s just the beginning of the Revue Starlight auditions as it’s not just Junna who’s vying for the Top Star, but Hikari Kagura who is still angry towards her childhood friend. 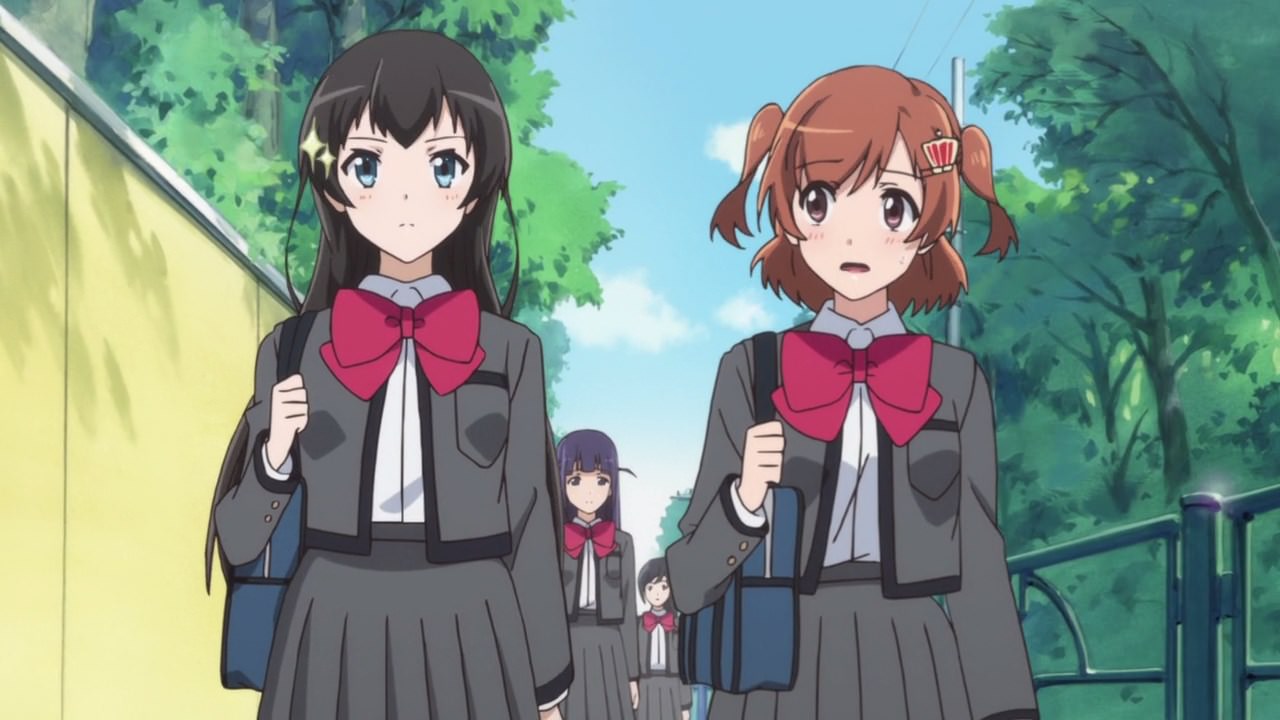 Speaking of Hikari, she’s trying to avoid Karen Aijou because she doesn’t like an outsider like her barging into the audition without getting a notification from that talking giraffe.

Then again, the giraffe let Karen in because it’s amusing to see Aijou having a dream to perform at the stage together with Kagura. So yeah, Hikari can’t do about it! 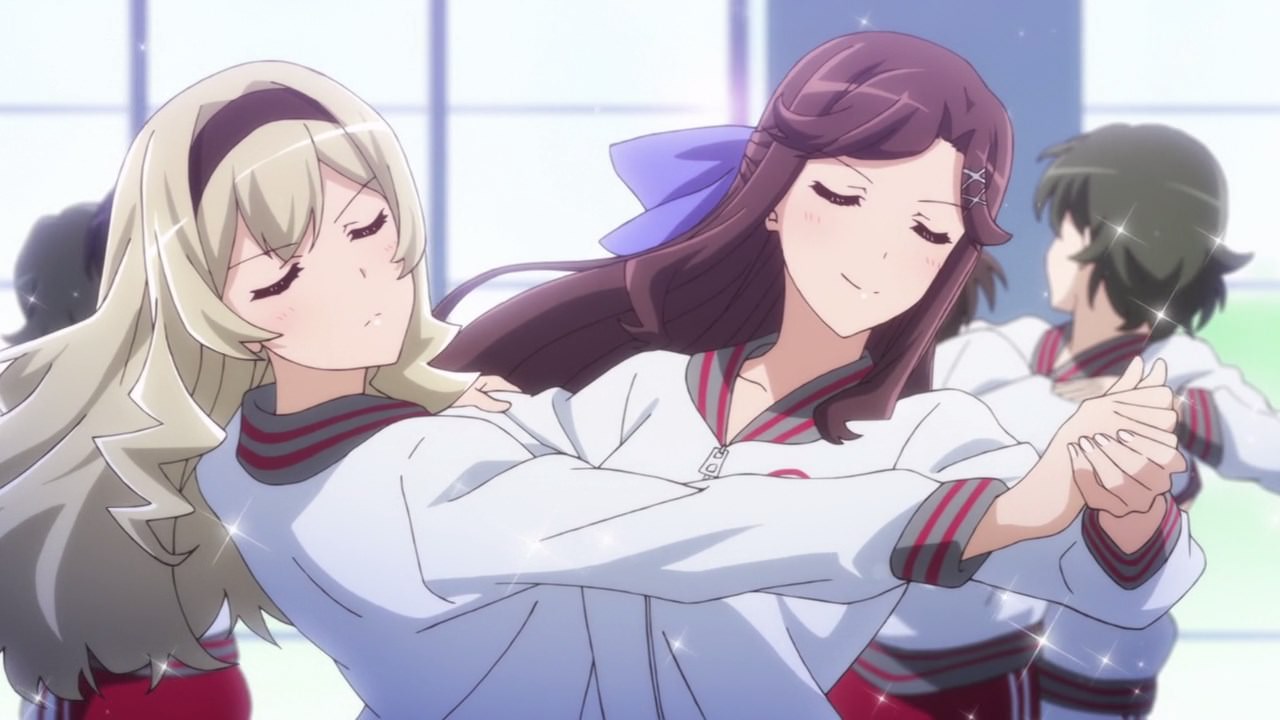 Meanwhile, let’s introduce some more characters as we have both Claudine Saijou and Maya Tendou, two students who are at the top of the pack within Seisho Music Academy.

Of course, both Claudine and Maya are rivals to each other where the former is acting since childhood, while the latter has 2 famous actors as her parents. 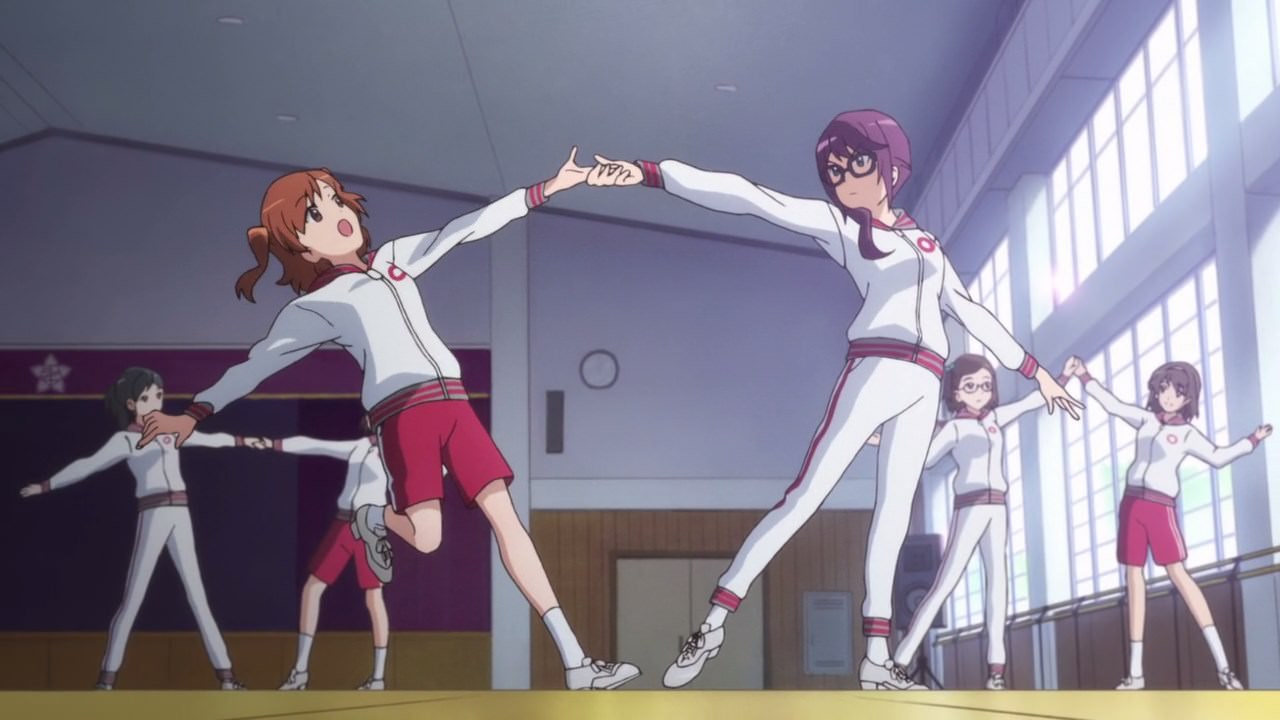 On the other hand, here’s Karen Aijou as she’s paired up with Junna Hoshimi. Unfortunately, Karen is not that talented as she struggled most of the time.

But hey, Karen has big dreams and a big heart to boot so she tries her best to perform no matter what! 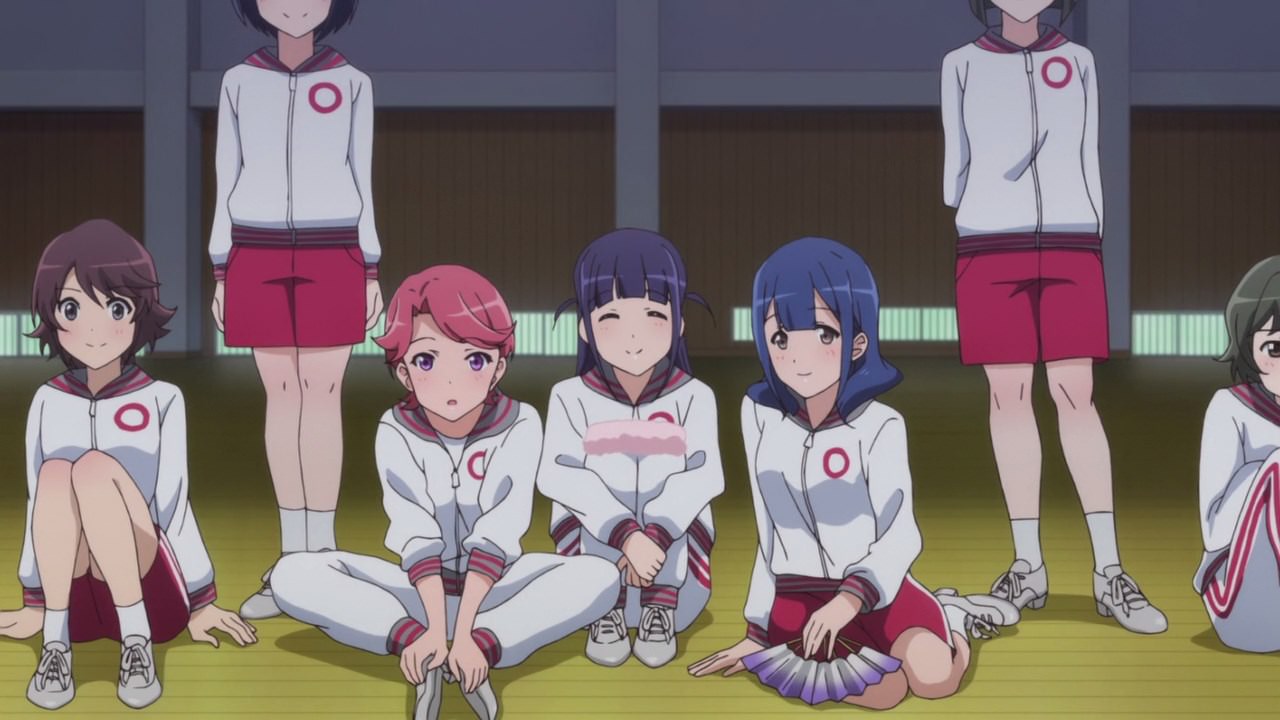 Also, here’s more characters and while I’ve already introduced Mahiru Tsuyuzaki, there’s both Futaba Isurugi and Kaoruko Hanayagi as they watch their classmates practice with their dance steps. 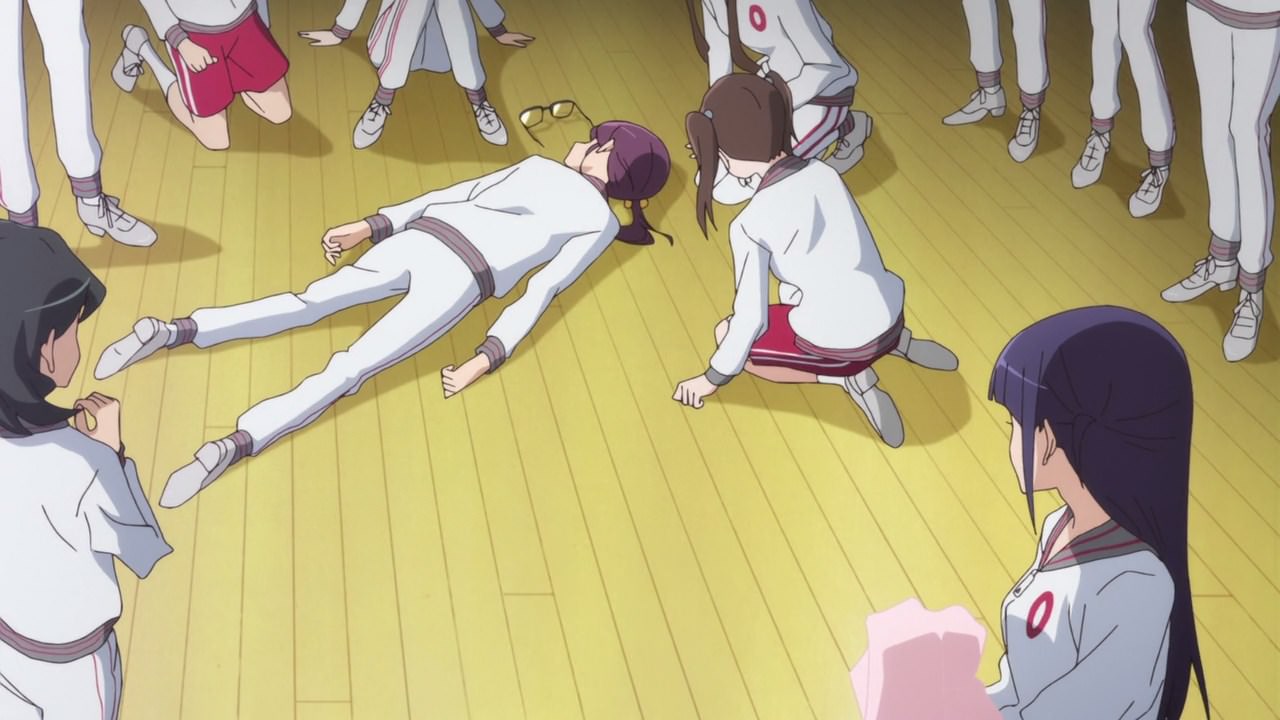 However, seems that there’s a mishap as Junna suddenly collapsed due to exhaustion. Turns out that she’s doing exercise in the morning for longer periods that Junna has no time to rest. 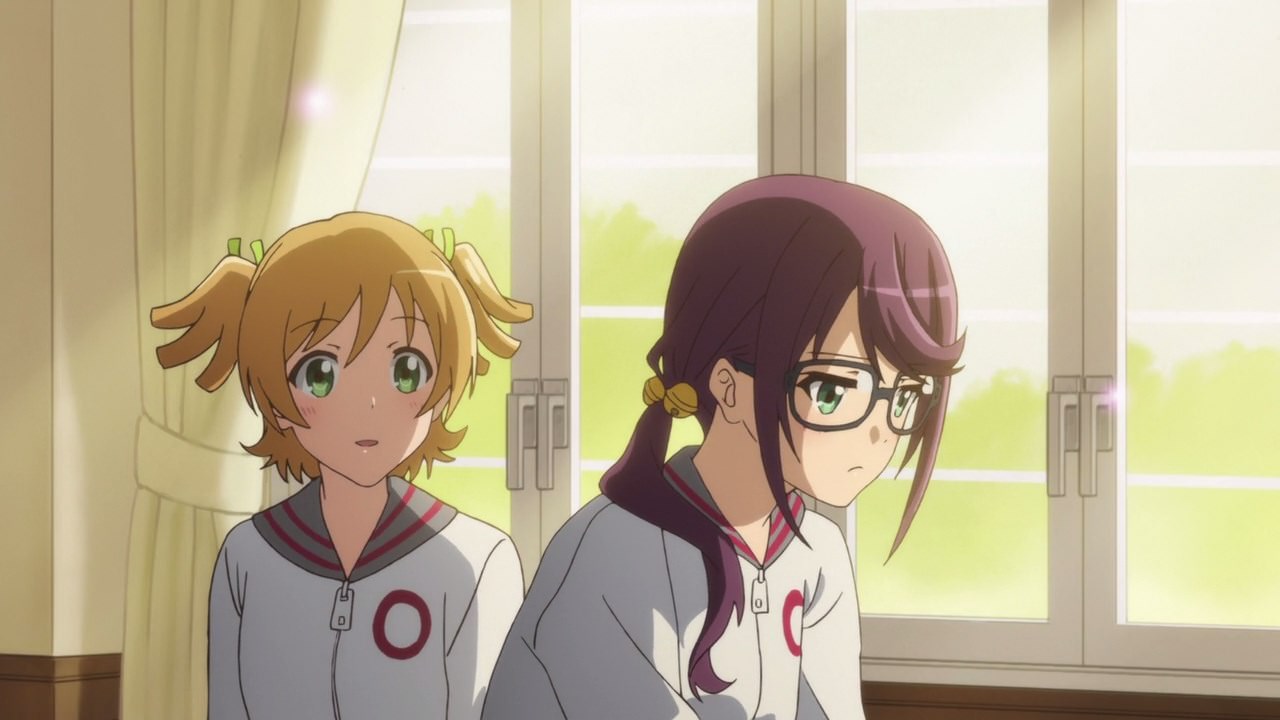 Still, Junna Hoshimi is determined to be on the stage as soon as possible, because she had that dream of becoming a special person instead of being in the shadows studying all the time.

With that said, looks like Junna will have to get up from her bed ’cause the 2nd day of the audition will start soon, although Nana Daiba told her to take it easy. 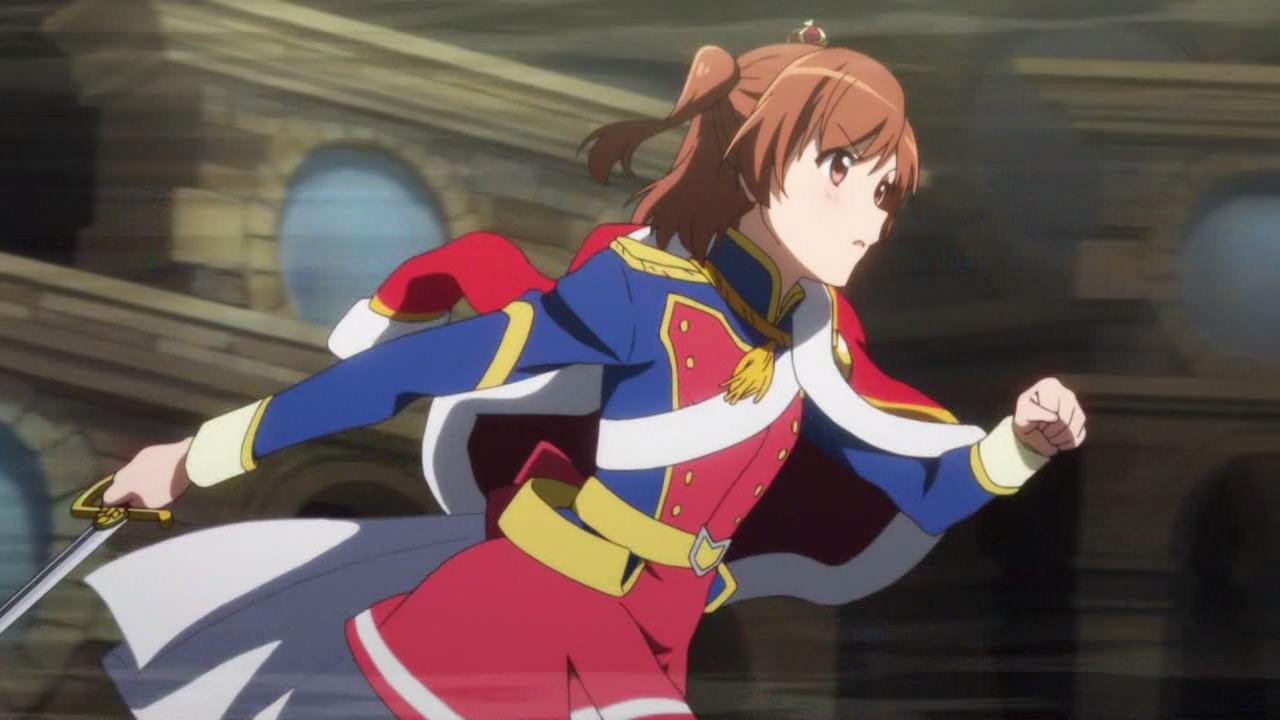 And so, the 2nd day begins with Karen Aijou taking the stage once again. Of course, she’s gonna have a hard time earning that sweet Position Zero… 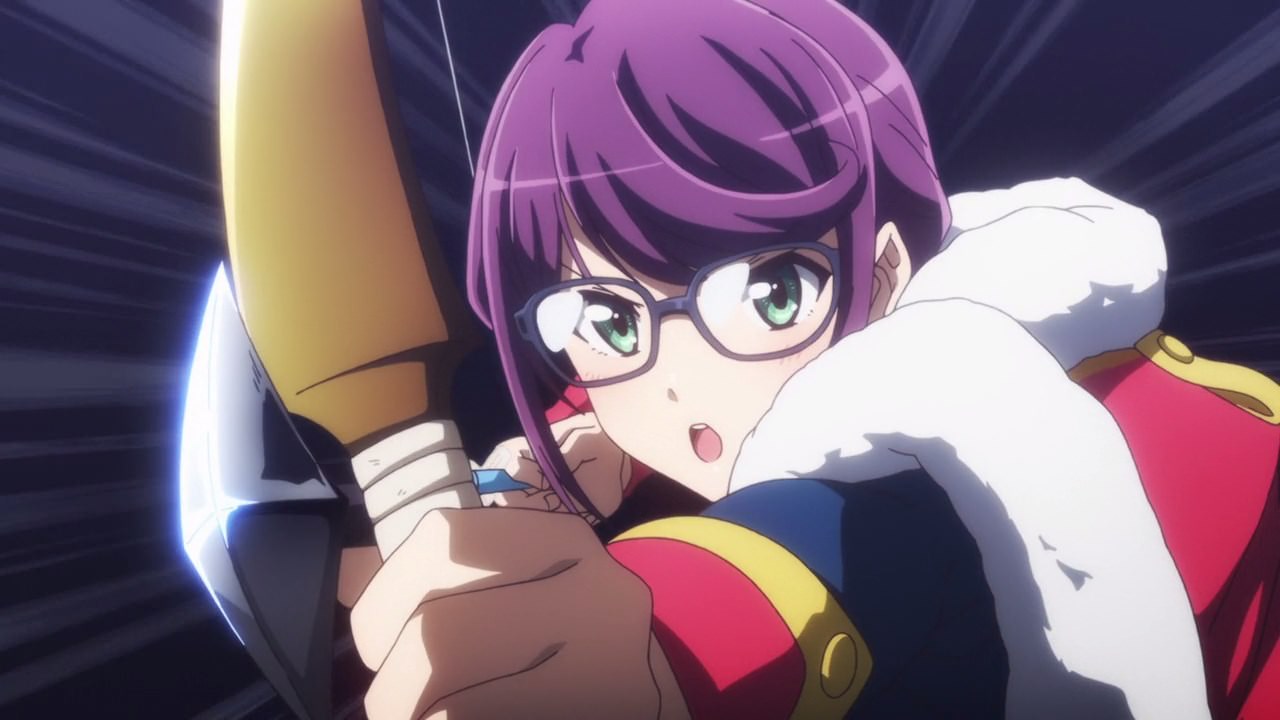 …especially when she’ll have to face Junna Hoshimi again. Oh, and she’s not gonna make the same mistakes from the previous one as Junna is somewhat crafty with her bow and arrow. 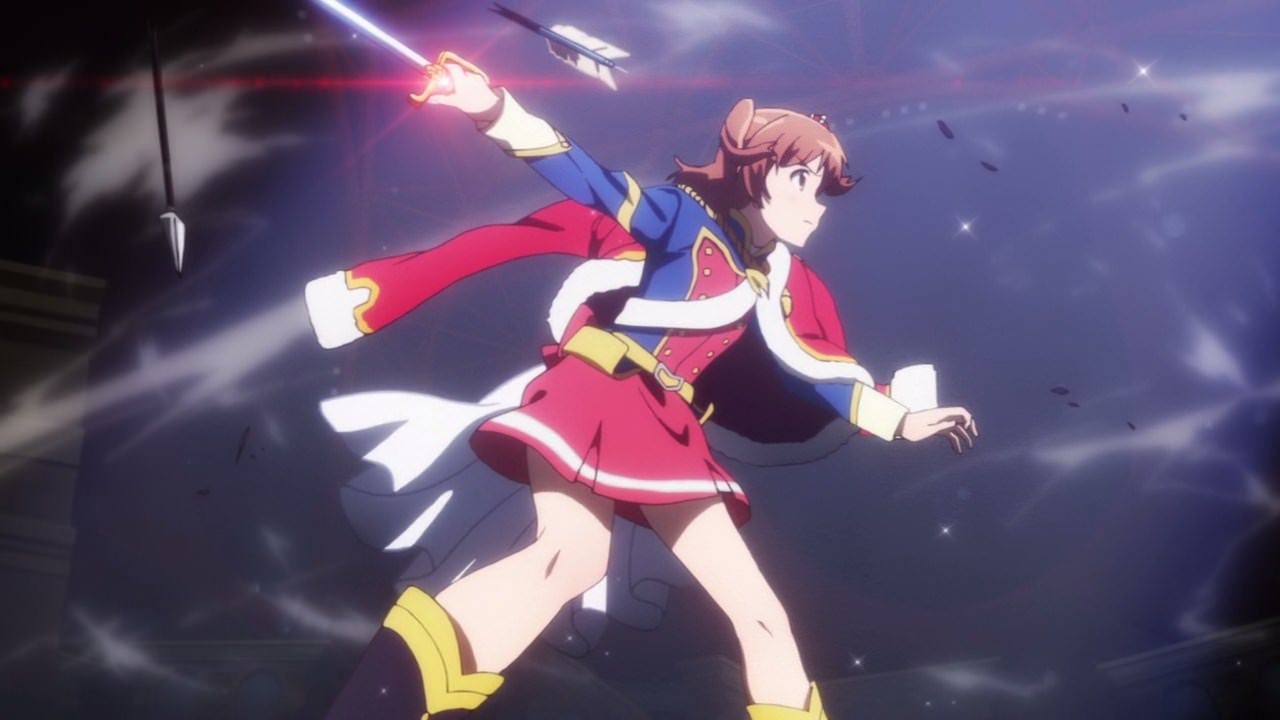 Then again, Karen is stronger because she’s the main character of this story as she deflects Junna’s arrows like a champ! 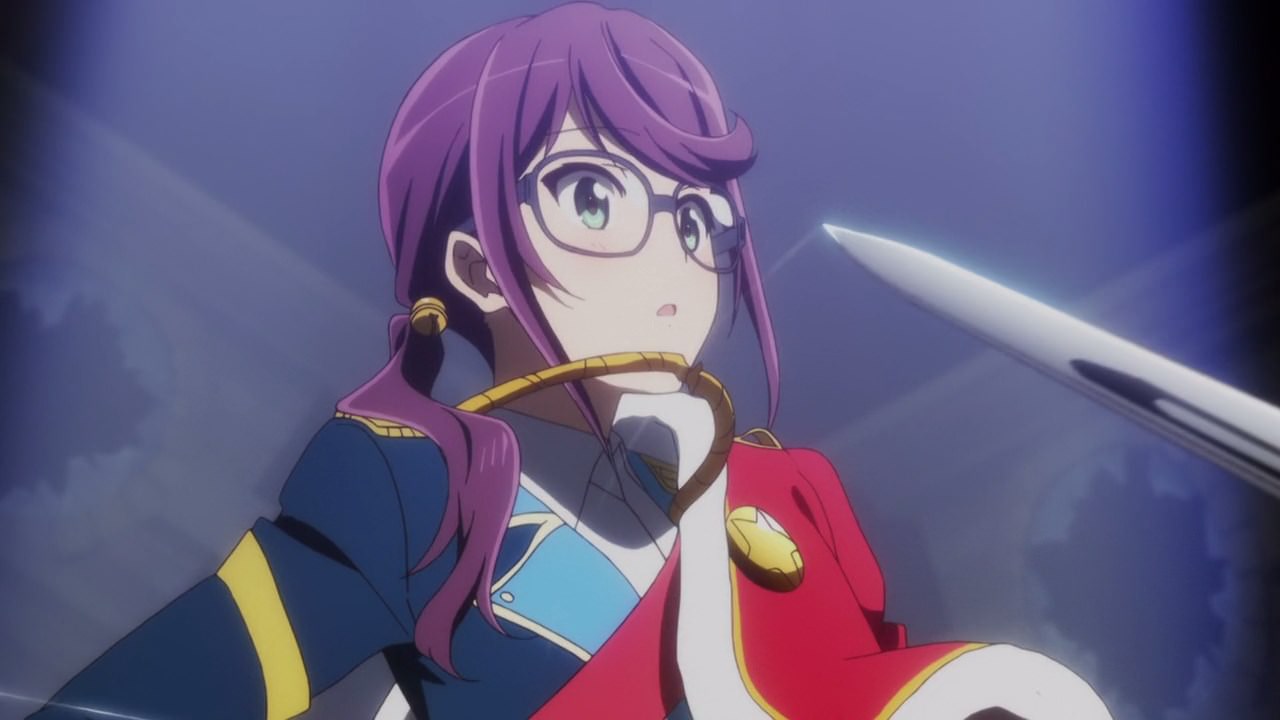 Oh, and she managed to beat Hoshimi by cutting the rope that holds her coat. Touché, Junna! 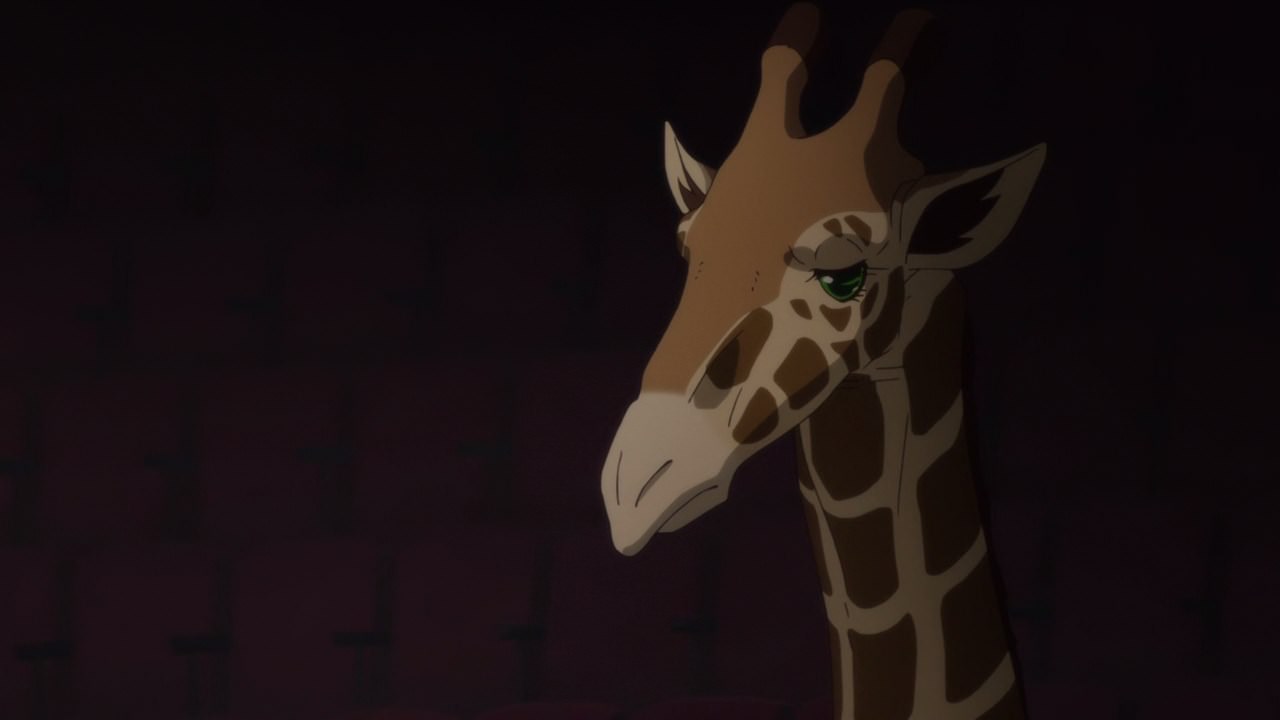 Well everyone, seems that we saw another victory by Karen Aijou as the giraffe was impressed by Karen’s performance. Of course, the giraffe understands why Karen suddenly thrust into the audition because of her shared dream with Hikari Kagura.

But as for the aftermath, seems that Junna has no hard feelings towards Karen as Hoshimi wants to see how far Aijou can go during the audition. Of course, there are various Stage Girls who wanted to become the Top Star of Revue Starlight… 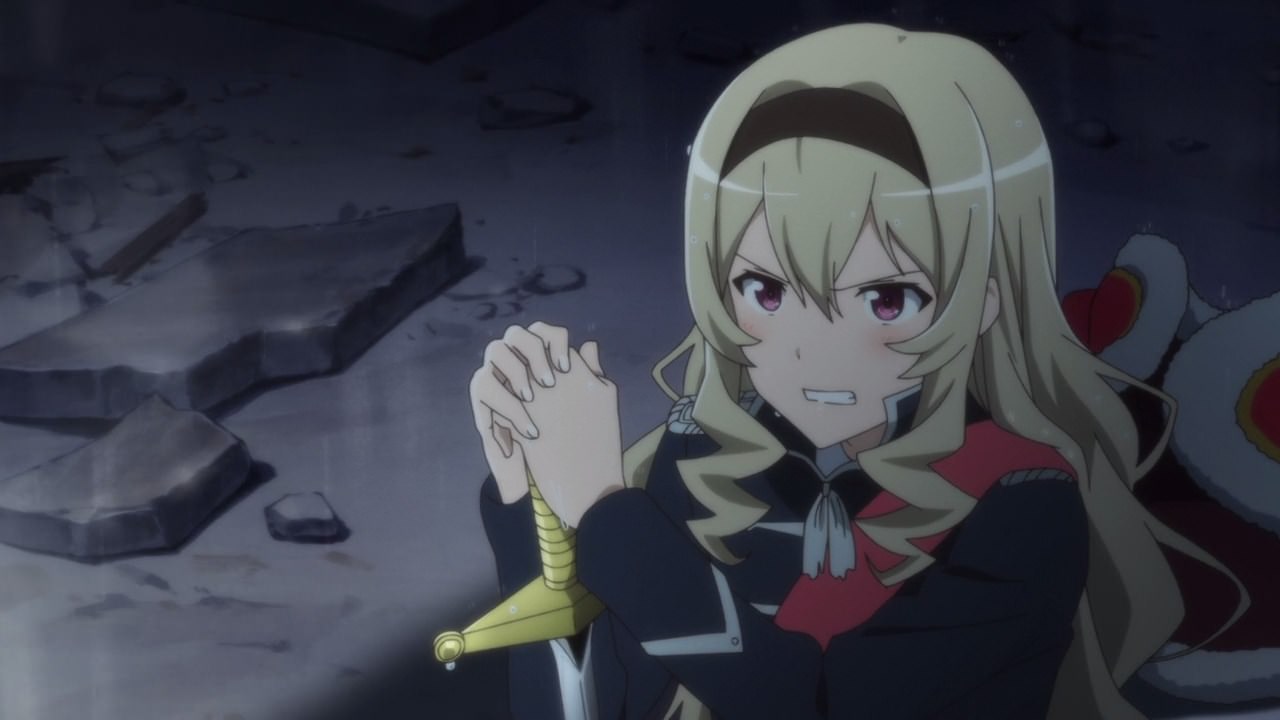 Case in point, here’s Claudine Saijou as it’s clearly shows her frustration towards her loss… 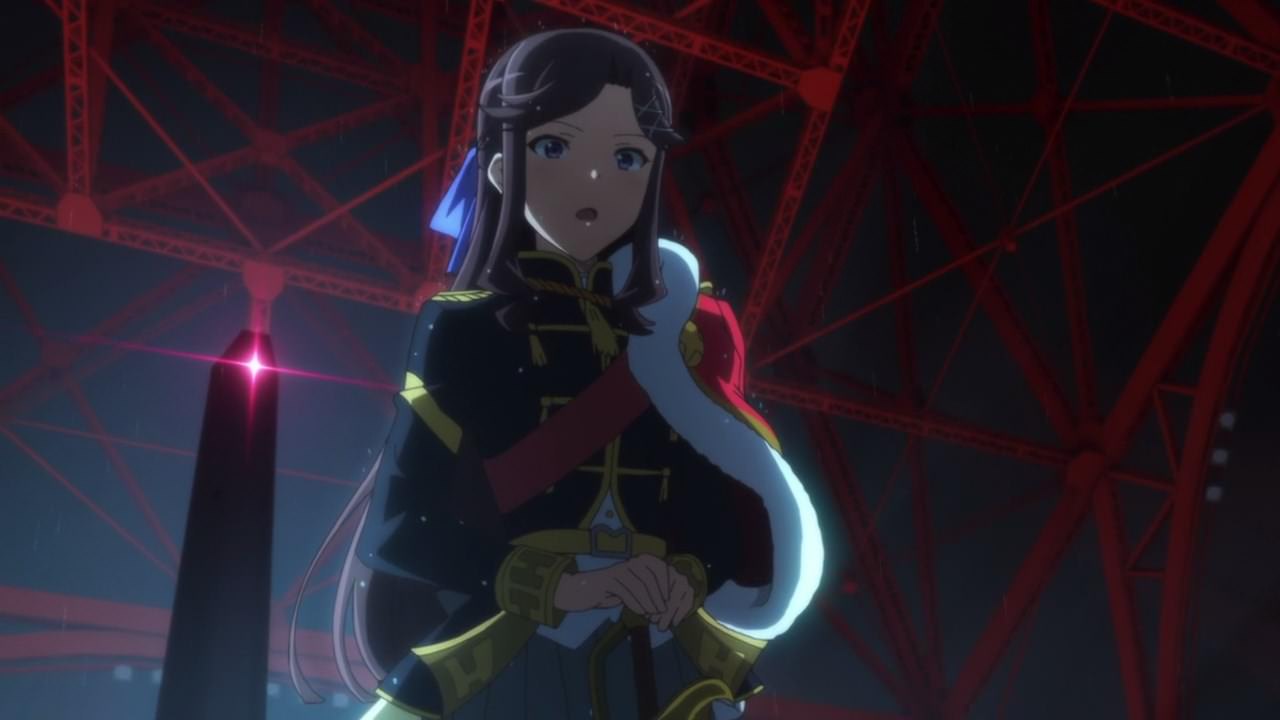 …against Maya Tendou of all people. Oh and by the way, Maya is currently the number one Stage Girl vying for the coveted Top Star position. So yeah, Karen’s road to join the troupe and become the Top Star is still very long!

With that said, seems that Shoujo Kageki Revue Starlight is getting interesting. Of course, I feel that some of the cast will join the audition and we’ll see various reasons on why they want to become the Top Star of the troupe. Not just Hikari, but the likes of Mahiru or even Nana. Anyways, I’ll see you on the next episode!