Free! Dive to the Future Episode #03 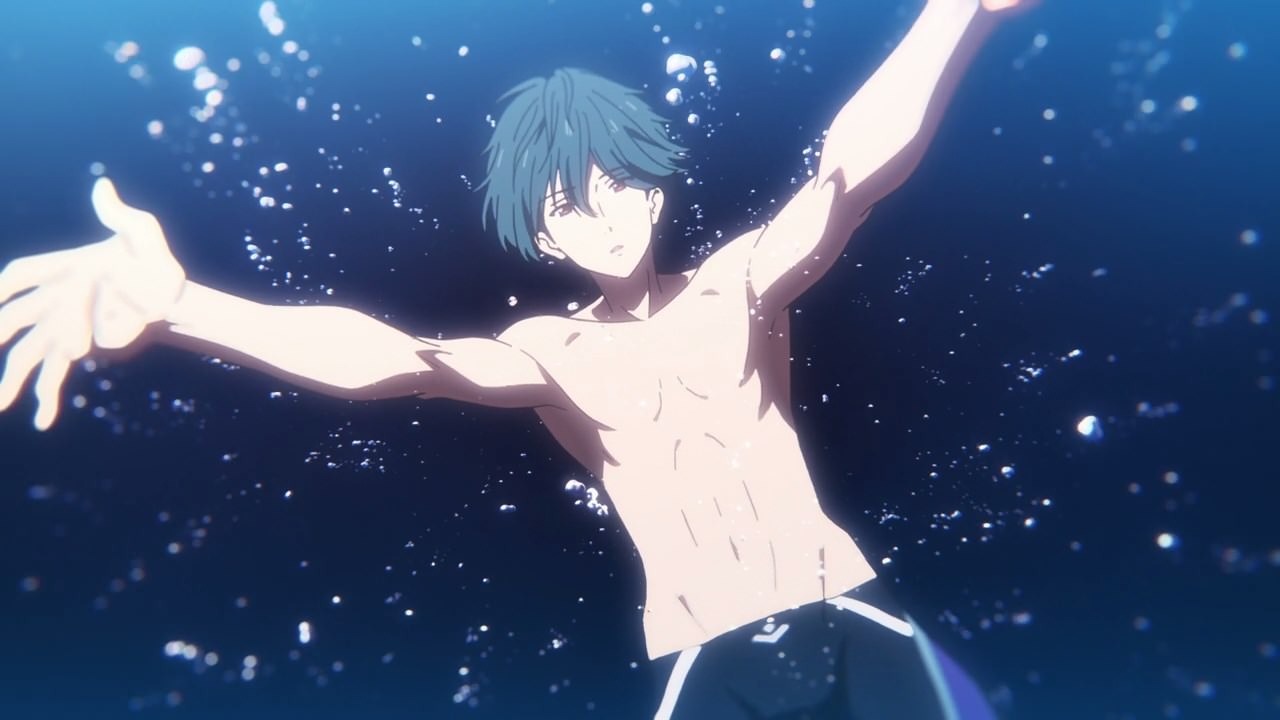 Here’s Ikuya Kirishima and while he briefly talked to Haruka Nanase that he has no hard feelings towards him and his friends, the truth is that Ikuya is deeply hurt. So much that his heart is completely shut and dedicated his life to master every stroke and compete in individual medley competitions. Heck, he went as far as going to the United States to train there.

So yeah, Ikuya Kirishima is very lonely and the only person who can rely on for now is his friend Hiyori Toono, who also went to America to become a better swimmer. Oh and about this screenshot? Let’s just say that Ikuya pushed himself too much that he almost drowned a couple of times. 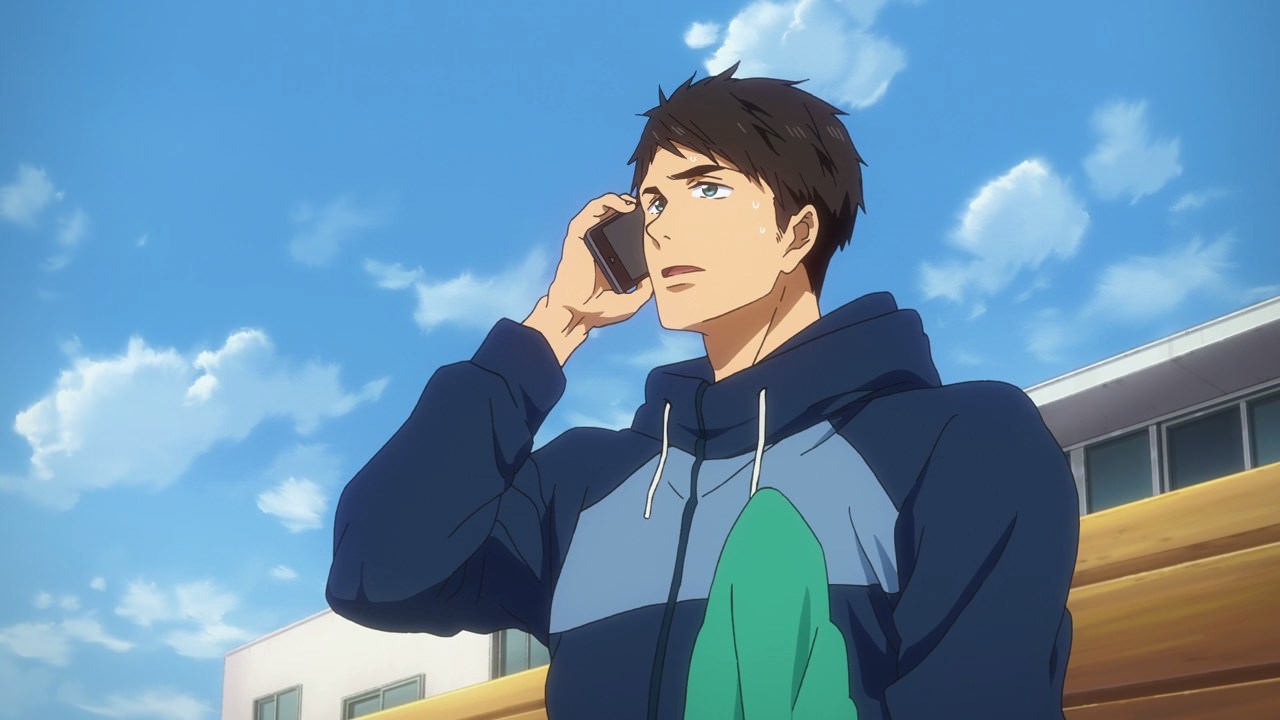 Now let’s go back to the present where Sousuke Yamazaki has returned, although he’s still recovering from his injured shoulder.

Also, Sousuke learned that Ikuya Kirishima has returned according to Makoto Tachibana. 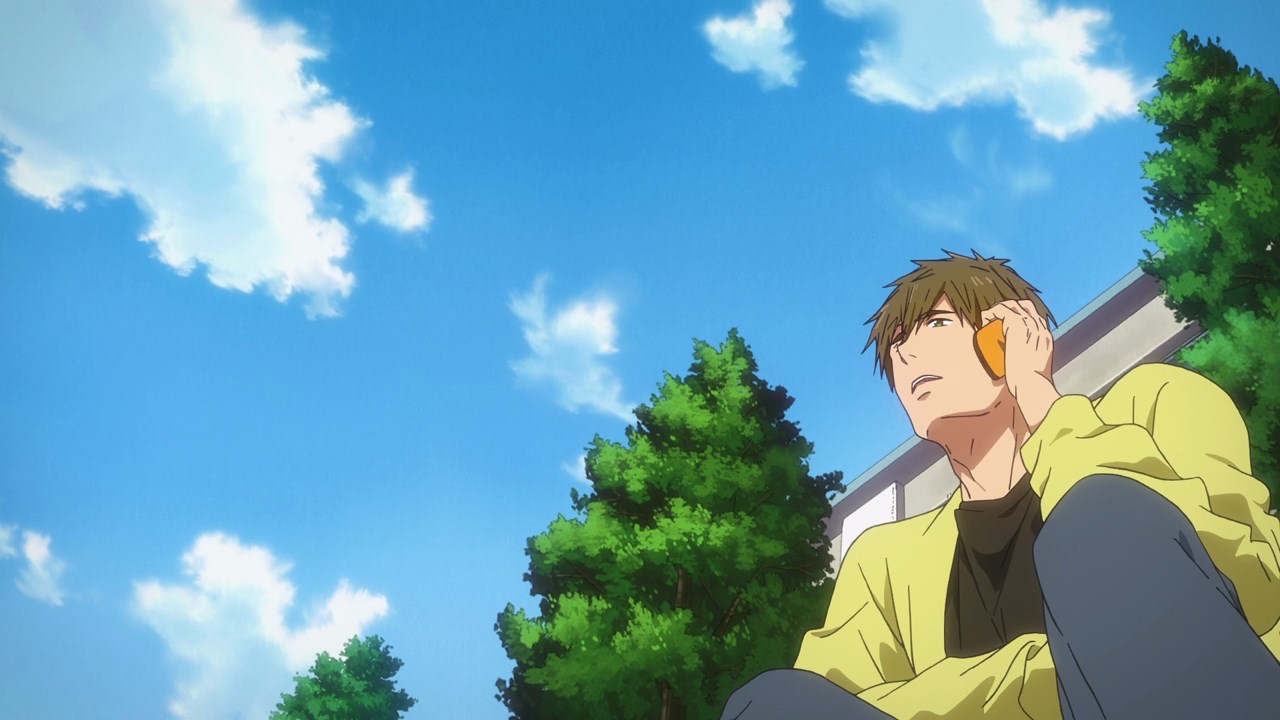 And speaking of Makoto, he and his middle school friends will plan to visit Shimogami University and see Ikuya.

But given that Ikuya Kirishima is busy with his training, coupled with Hiyori Toono stopping everyone who disturb him, seems that Haruka Nanase and his friends will have a hard time reaching him out. Really, I think Ikuya needs some help from his friends! 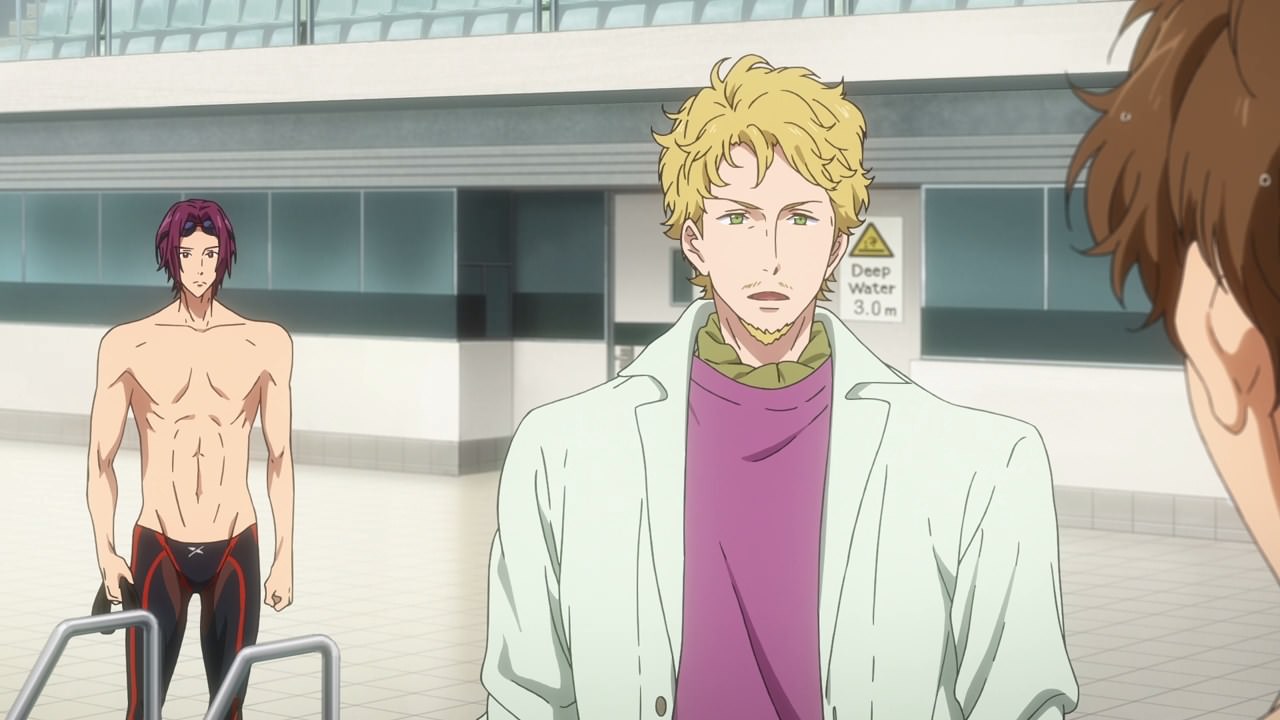 Finally, we now return to Australia where Rin Matsuoka encountered a Japanese swimmer where this guy asked Mikhail to train him, but he refused to do so simply because Mikhail has a different taste when it comes to muscles.

You know what, I think Mikhail will be good friends with Gou Matsuoka since she loves muscles too! 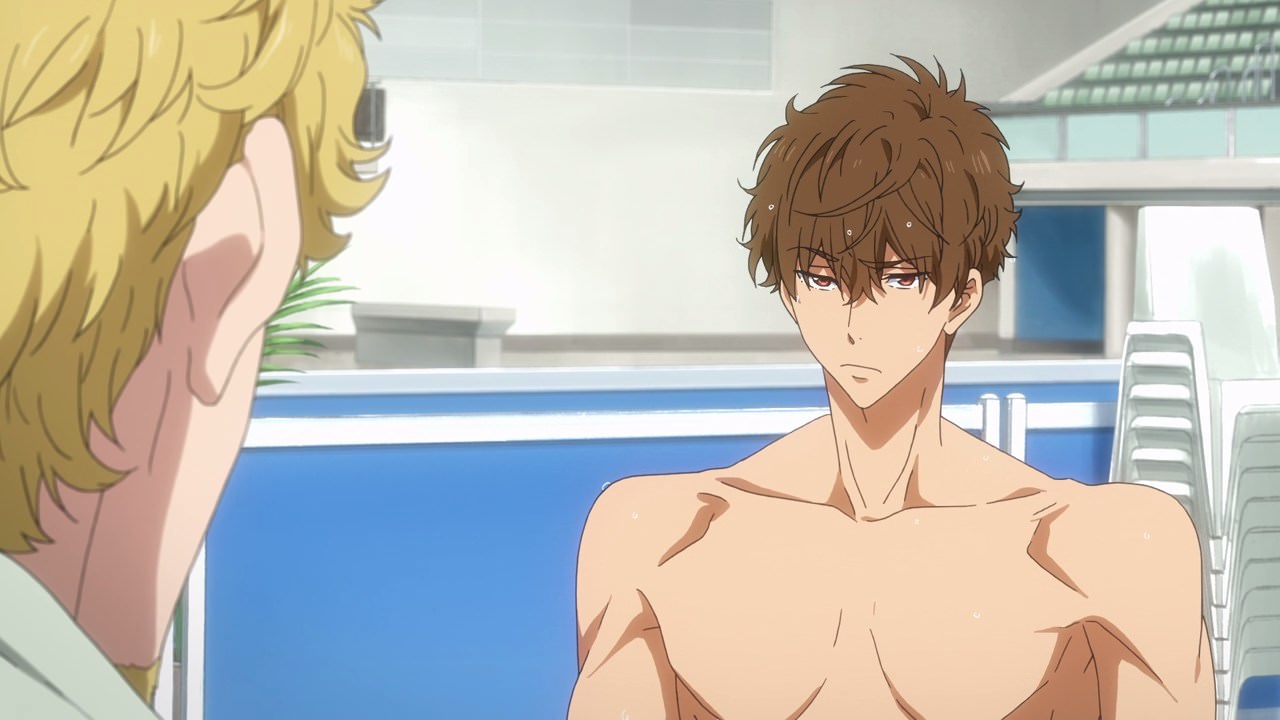 Anyways, this is Natsuya Kirishima who is Ikuya’s big brother and he’s a former member of Iwatobi Middle School’s swim club, which means that he knows about Haruka Nanase, Makoto Tachibana, etc.

And unlike his little brother Ikuya, Natsuya is carefree and a bit brash as even though he trained in the United States, he still wants to be the best swimmer around by challenging everyone around the world. Basically, he’s the Ryu of this series. 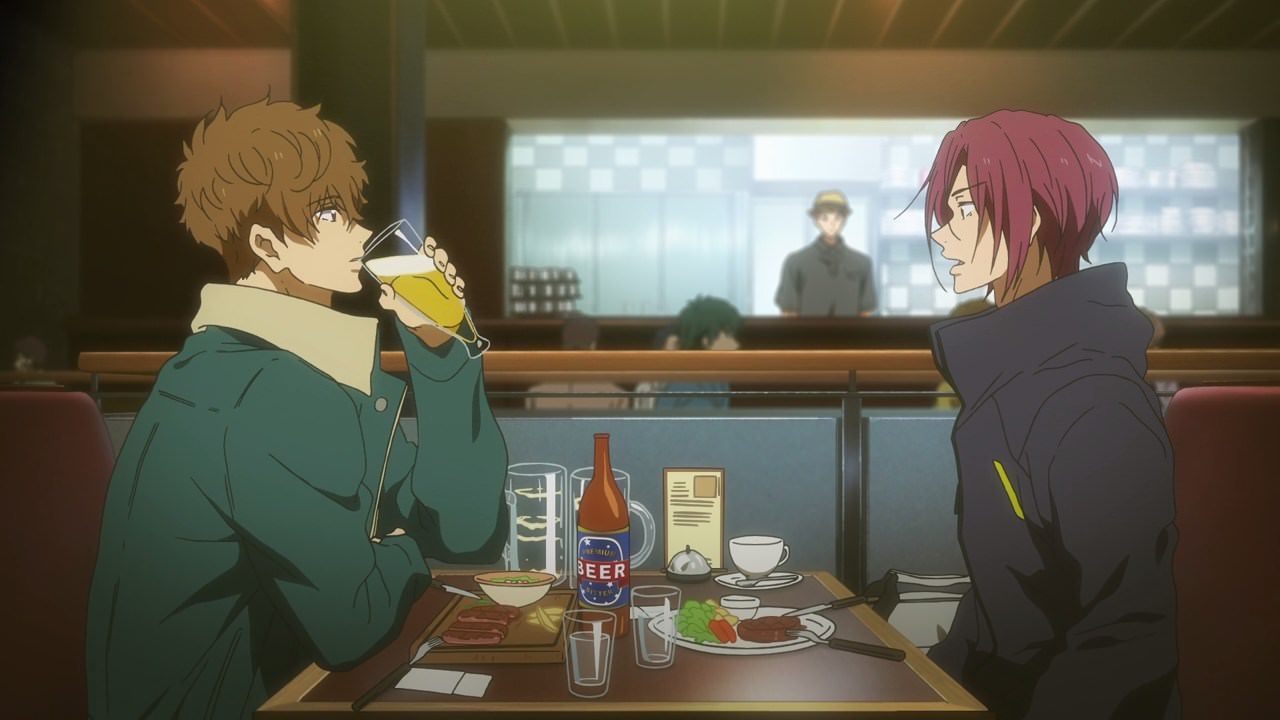 In any case, Natsuya wants to stick around in Australia for a bit longer because he still wants Mikhail to train him. But you know what, Natsuya doesn’t need some formal training from some dude because he’s stronger already. Now, he spends his life travelling around the world, drink booze, and compete for prize money, although Natsuya should check on his brother from time to time even though Hiyori is doing it 24/7.

Well, I must say that Rin Matsuoka will have a roommate in the form of Natsuya Kirishima because even though he’s somewhat of a drunkard and a brash swimmer, he’s quite interesting as Natsuya might help Haruka and his buddies on opening Ikuya’s heart. But then again, I think that he’ll spend his time beating Rin, all while drinking a mug or two. Anyways, I’ll see you next time!