Posted on September 9, 2018 by benigmatica 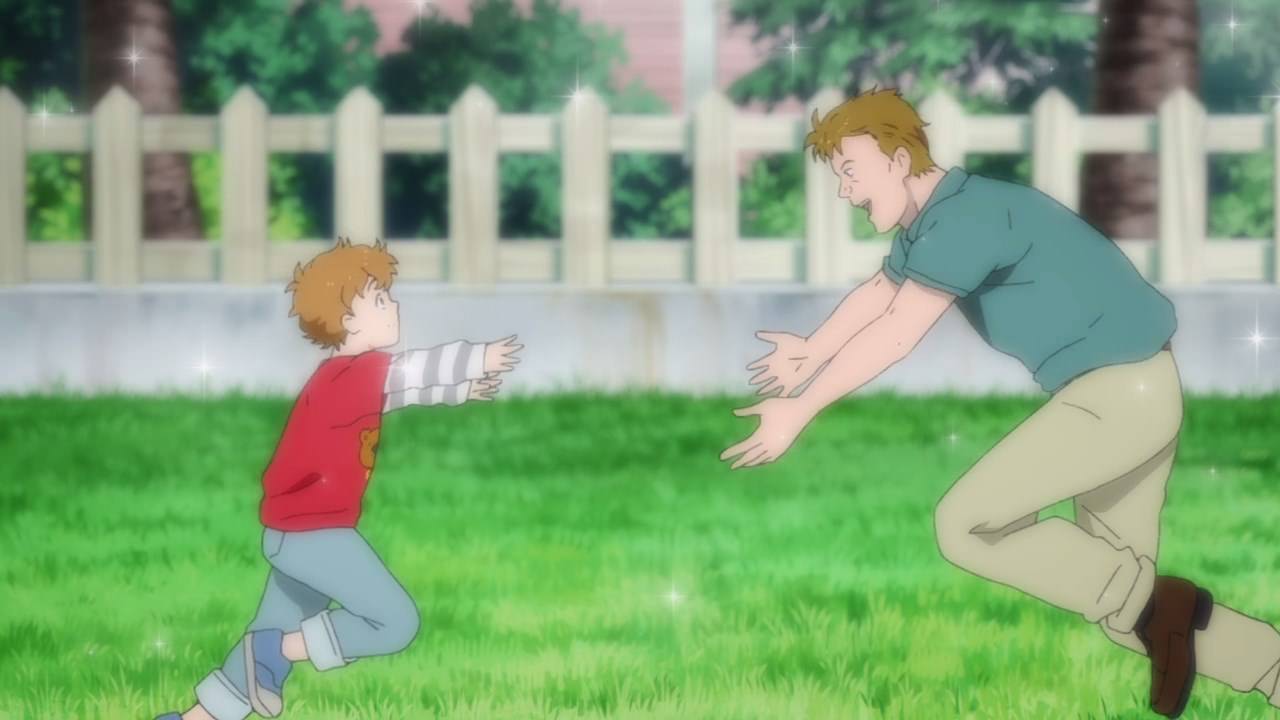 Looks like the gang are now in California as Max Lobo reunites with his son Michael. How sweet! 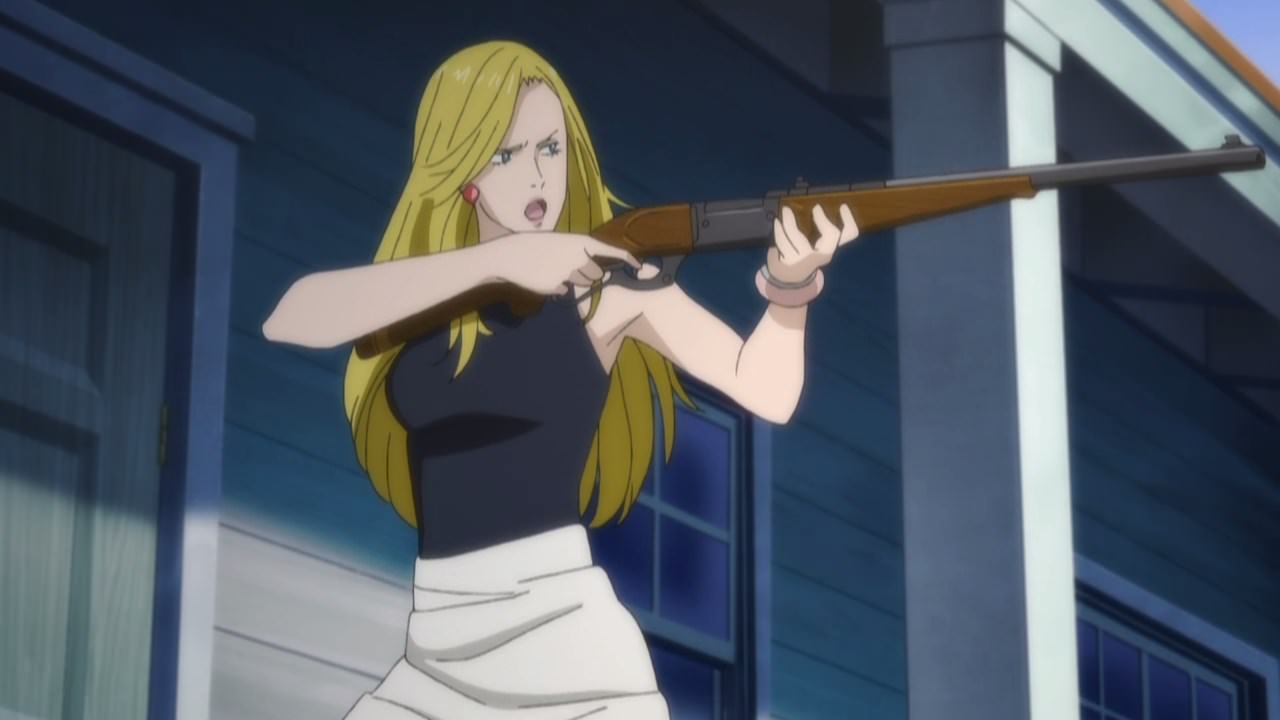 But then again, we have Max’s ex-wife Jessica where she threatens to shoot him with a shotgun if Max get closer to her son. And really, it’s one complicated mess when his/her parents are fighting over them. 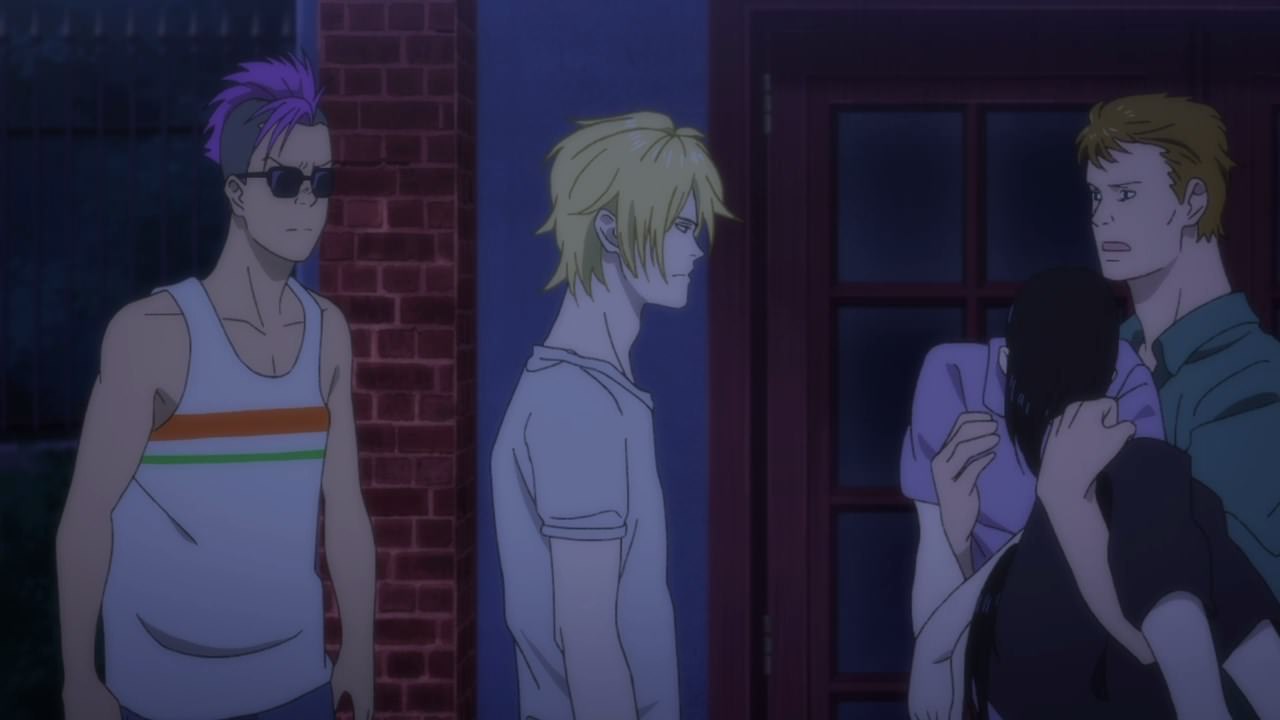 Now then, let’s move onto the next scene where Ash Lynx and the gang went to 102, 42 Westwood, Los Angeles where they found a guy who got collapsed after some goons stormed the mansion and hit him in the noggin. 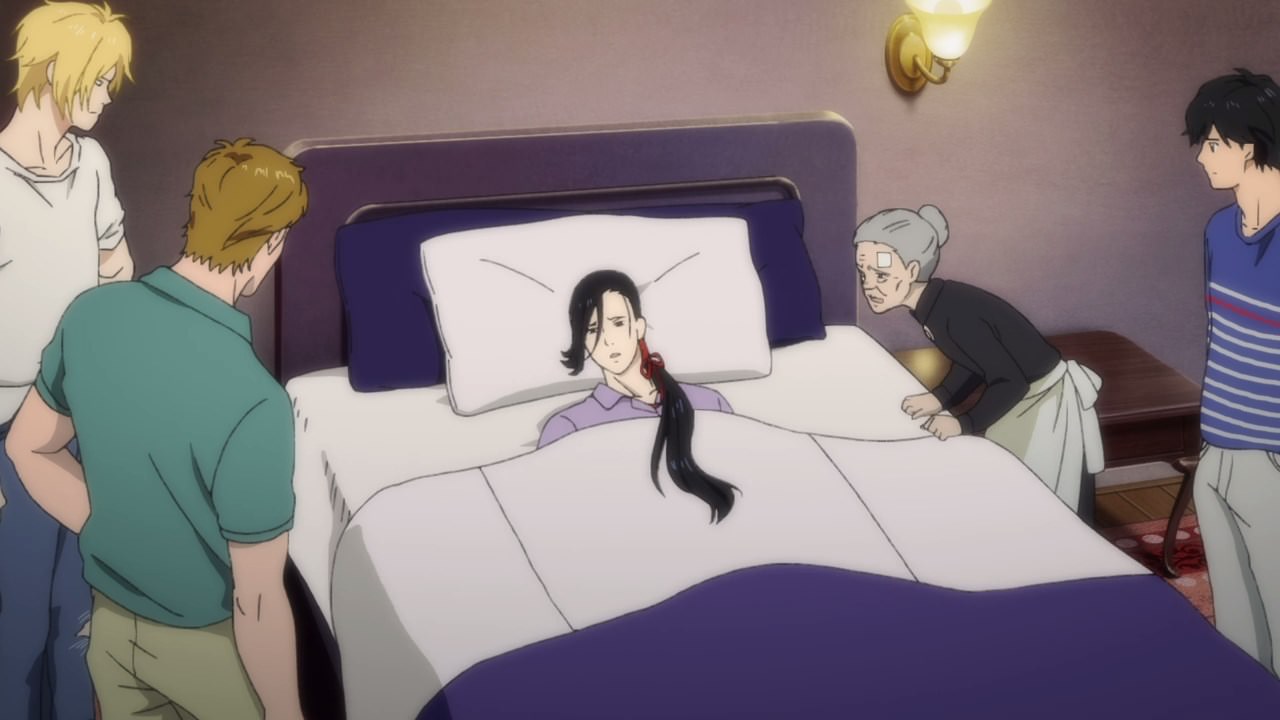 Fortunately, this guy is okay as he introduced himself as Yau-Si Dawson, the adopted son of Alexis Dawson.

Speaking of the Dawson family, Alexis is the older brother of Abraham Dawson but Yau-Si explains that his father disappeared 6 months ago. 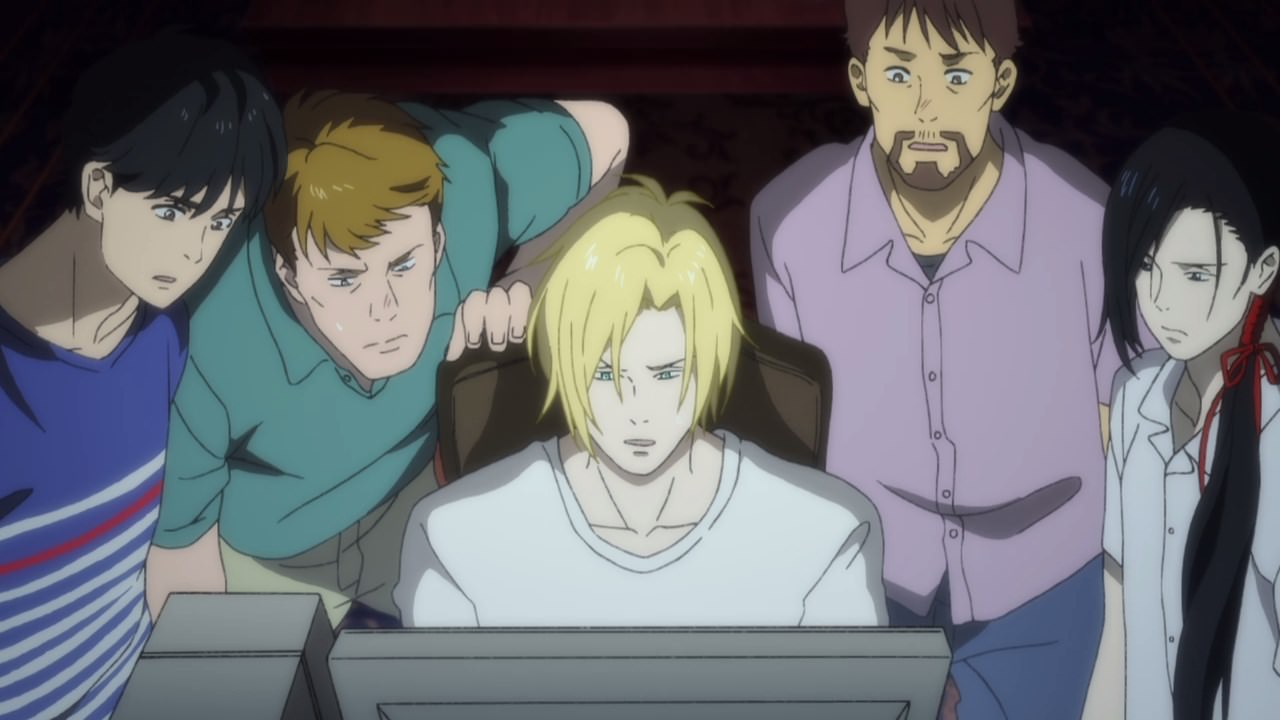 And since Ash Lynx and the gang are here at the Dawson mansion, they waste no time on hacking Alexis’ computer to find some clues on Banana Fish.

Yes, it’s a drug that makes people go crazy until they become a vegetable state. However, it turns out that while they found the schematics of the drug, nothing else important was found. 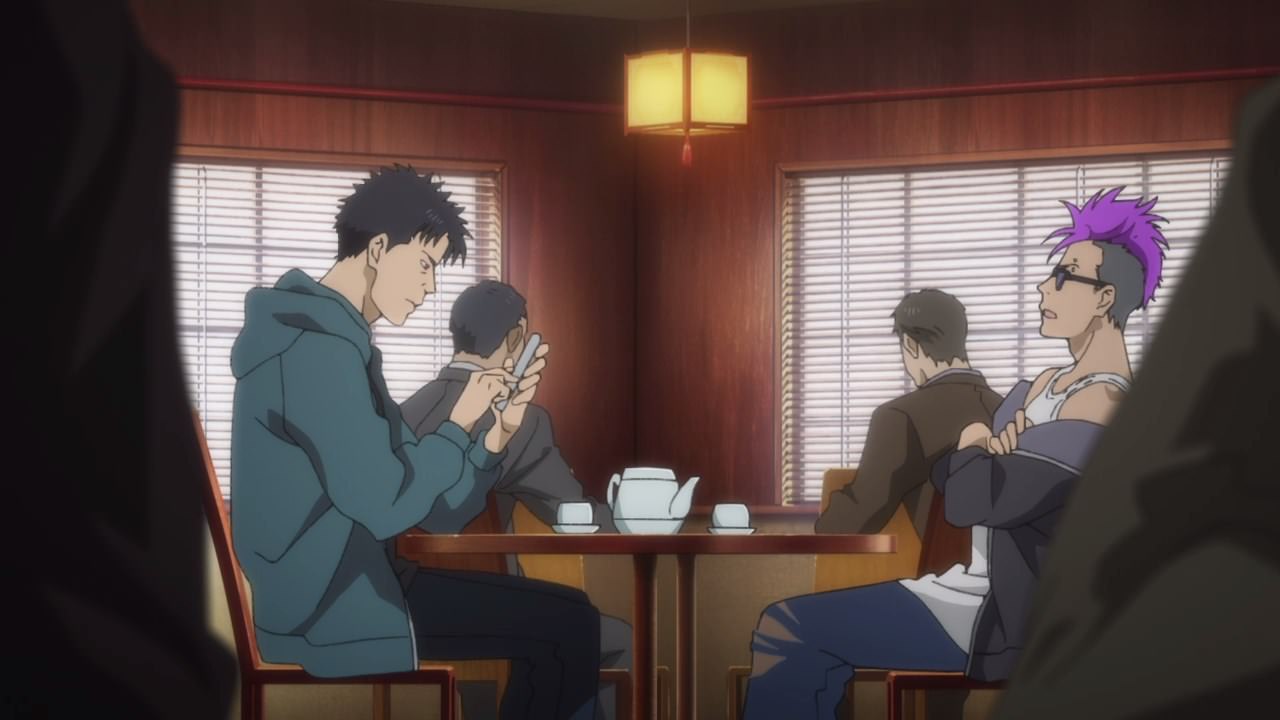 Meanwhile, Shorter Wong went to Chinatown, Los Angeles to meet a friend and talk about various things ranging from reminiscing memories with Nadia, to finding more information about Yau-Si Dawson. 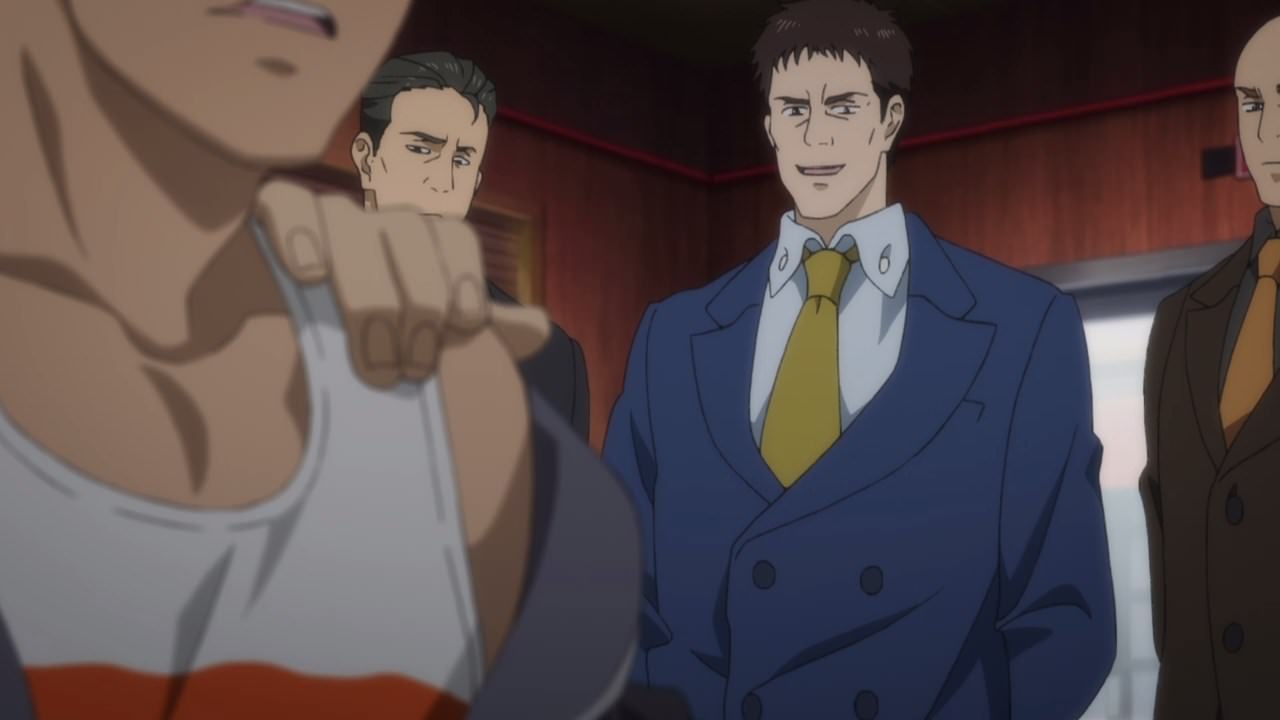 Unfortunately, Shorter should have gone to another place as he’s now captured by a guy named Lee Hua-Lung. By the way, the guy named Mr. Lee who appeared in Episodes 5 and 6 is Hua-Lung’s eldest brother Wang-Lung.

Anyways, Hua-Lung told Shorter to follow Yut-Lung’s orders or he’ll be toast. Oh, and his sister Nadia will be in danger if Shorter didn’t follow it. So, who is this Yut-Lung guy he speak of? 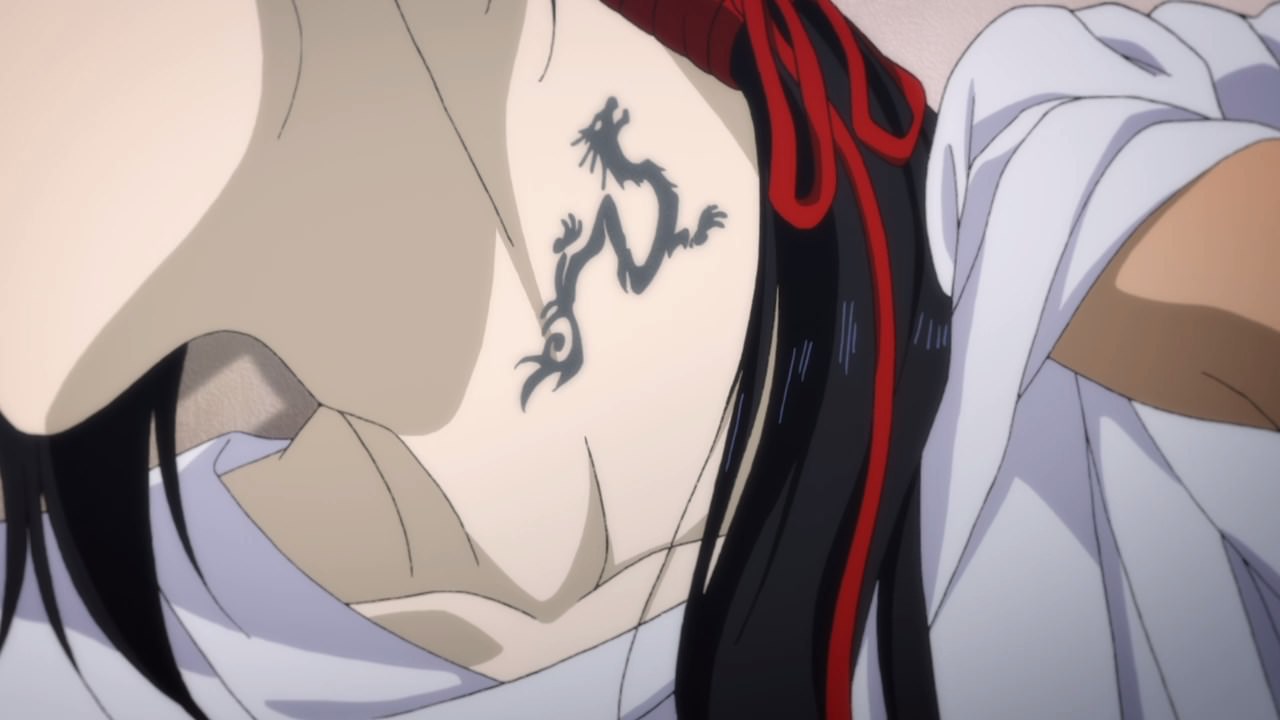 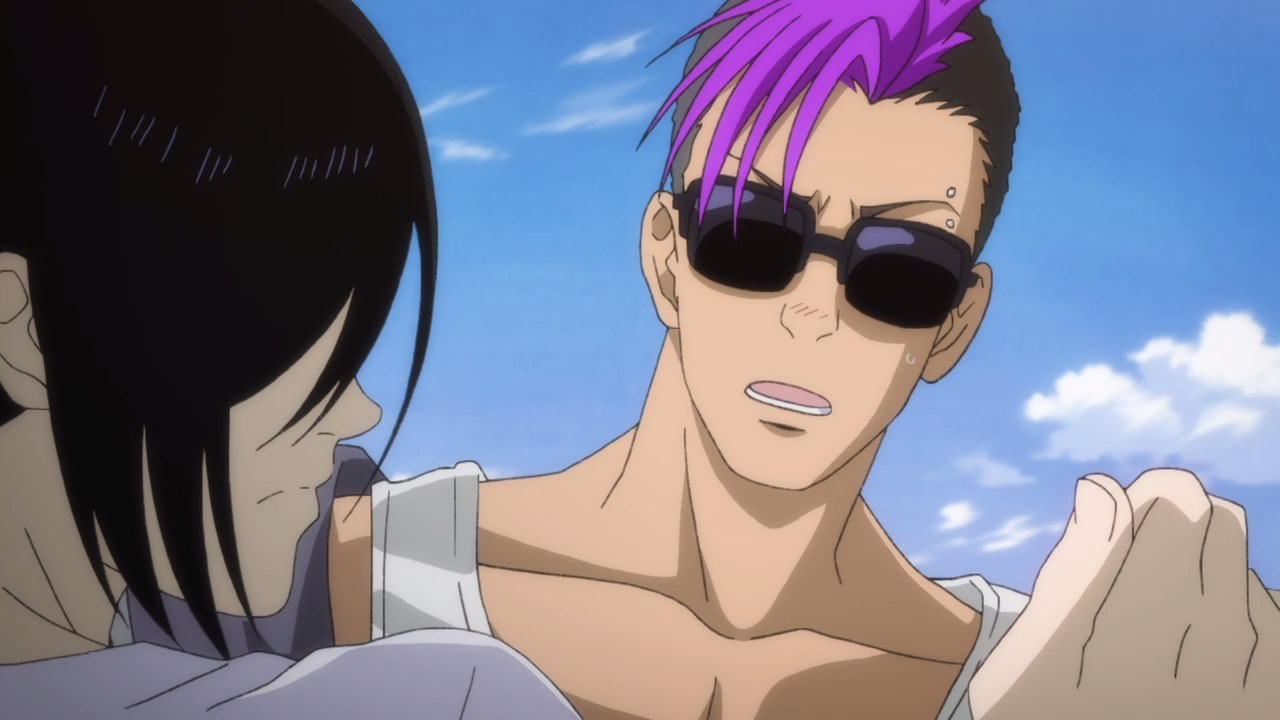 Well, we’re about to find out as Shorter Wong got suspicious of Yau-Si Dawson that Shorter pushed him to the wall, only to find a dragon symbol in his neck.

Oh yeah, and this is important because this symbol represents the Lee clan, which surprised Shorter Wong as the Lee clan are the ones who gave him and his sister a better life in America… until they shake hands with Dino Golzine that is. 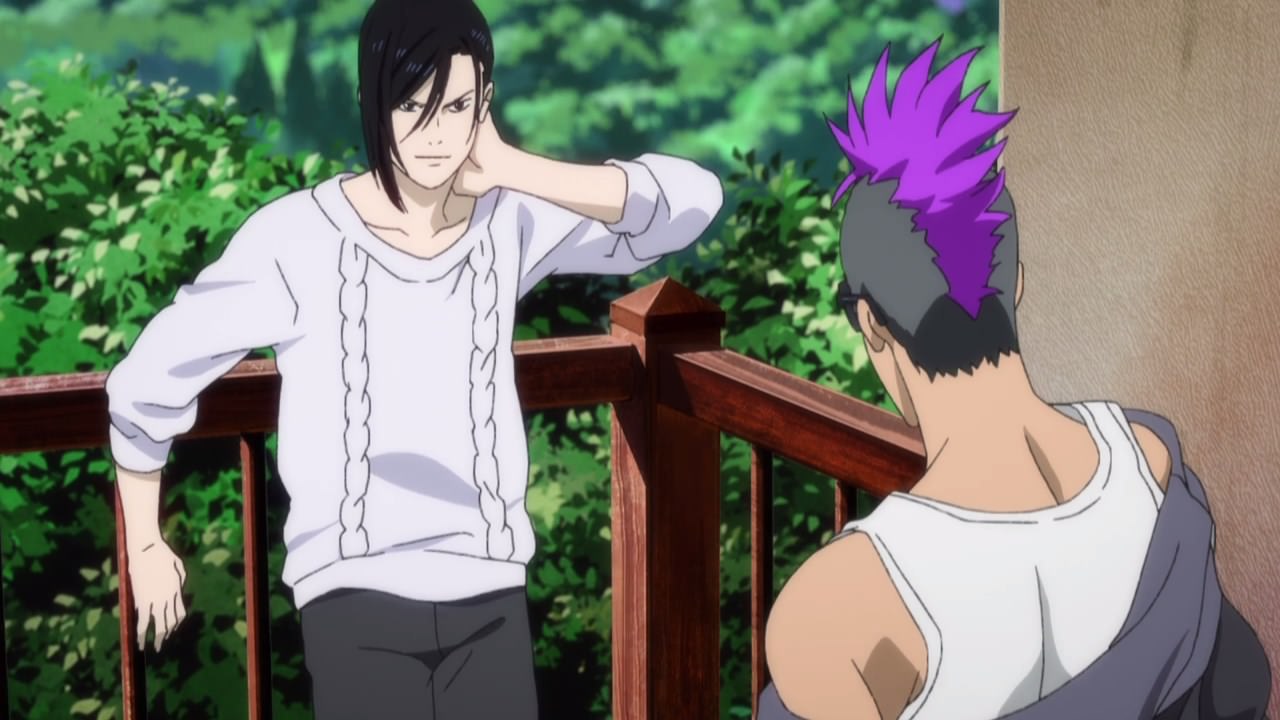 Anyways, turns out that Yau-Si Dawson is just a pseudonym of Lee Yut-Lung as he orders Shorter Wong to spy on Ash Lynx, which he doesn’t like it because he and Ash are buddies and he can’t betray his friend.

Of course, Yut-Lung will threaten his sister’s safety should Shorter disobeys him. So yeah, Shorter Wong is in a tight spot right now! 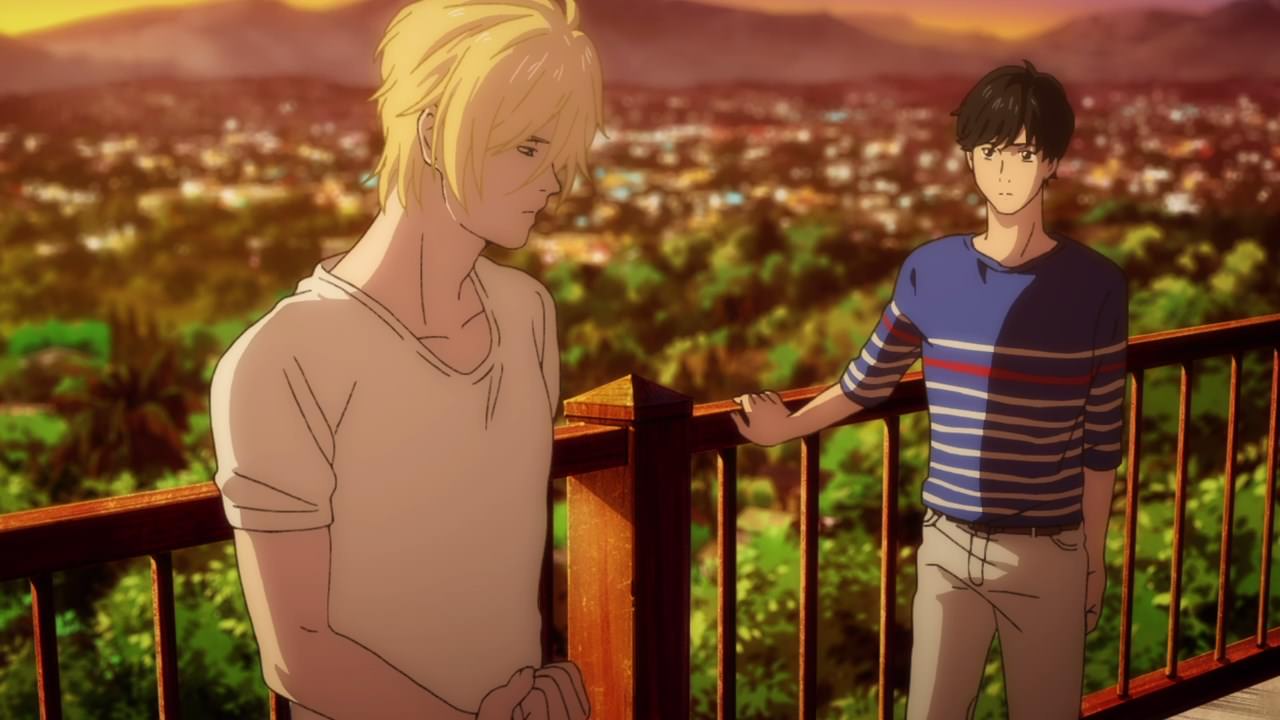 Lastly, here’s Ash Lynx as he told Eiji Okumura to leave Japan because it’s no longer a case of revenge, but rather a conspiracy on a national scale that it’s very dangerous for an outsider like Eiji to dig deeper into Papa Dino’s mess.

After all, Ash is giving Eiji a chance to save himself from being killed by the mafia, as he doesn’t want to lose his loved ones like Skip and Griffin. However, Eiji is determined to see it through the end, although Shunichi Ibe is worried sick about him. Still, I’m hoping that other than Eiji who’s very stubborn, no one will get caught in Ash Lynx’s revenge plot. 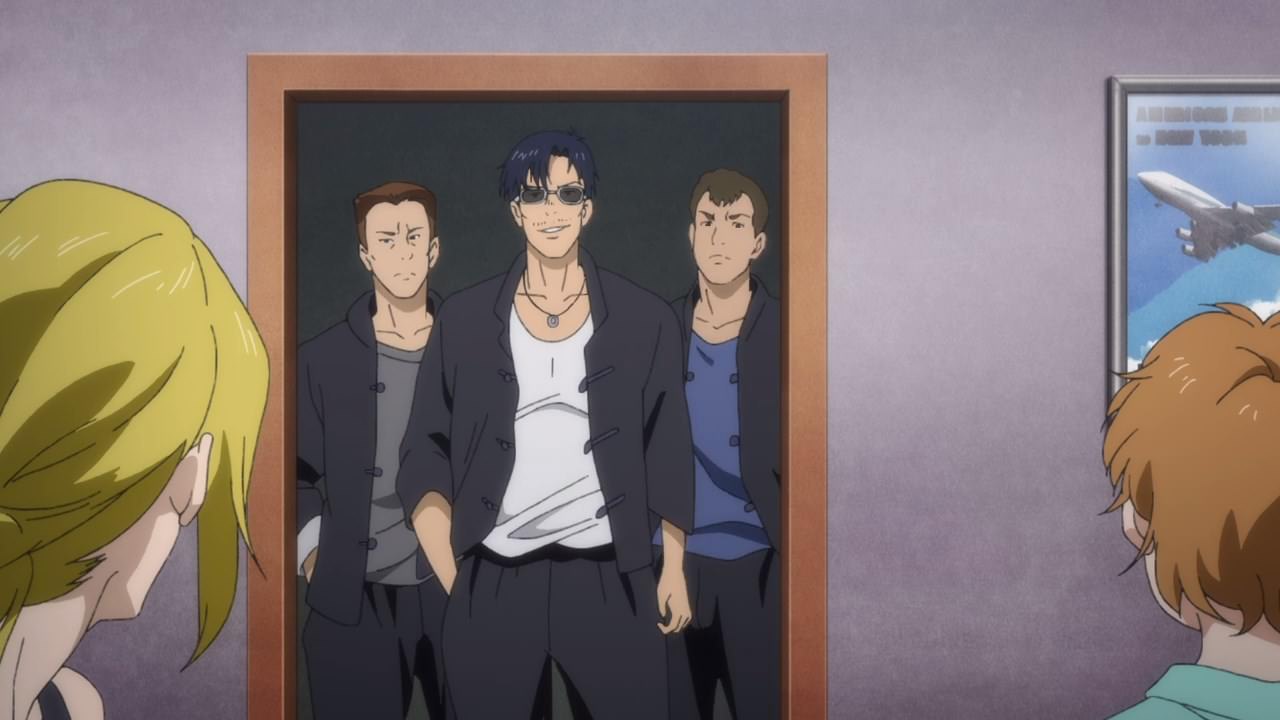 Then again, I spoke too soon as some thugs visited Jessica’s home and I have a feeling that they’re from the Corsican mafia. Hell, I’m worried that these guys might kidnap Michael and rape Jessica! 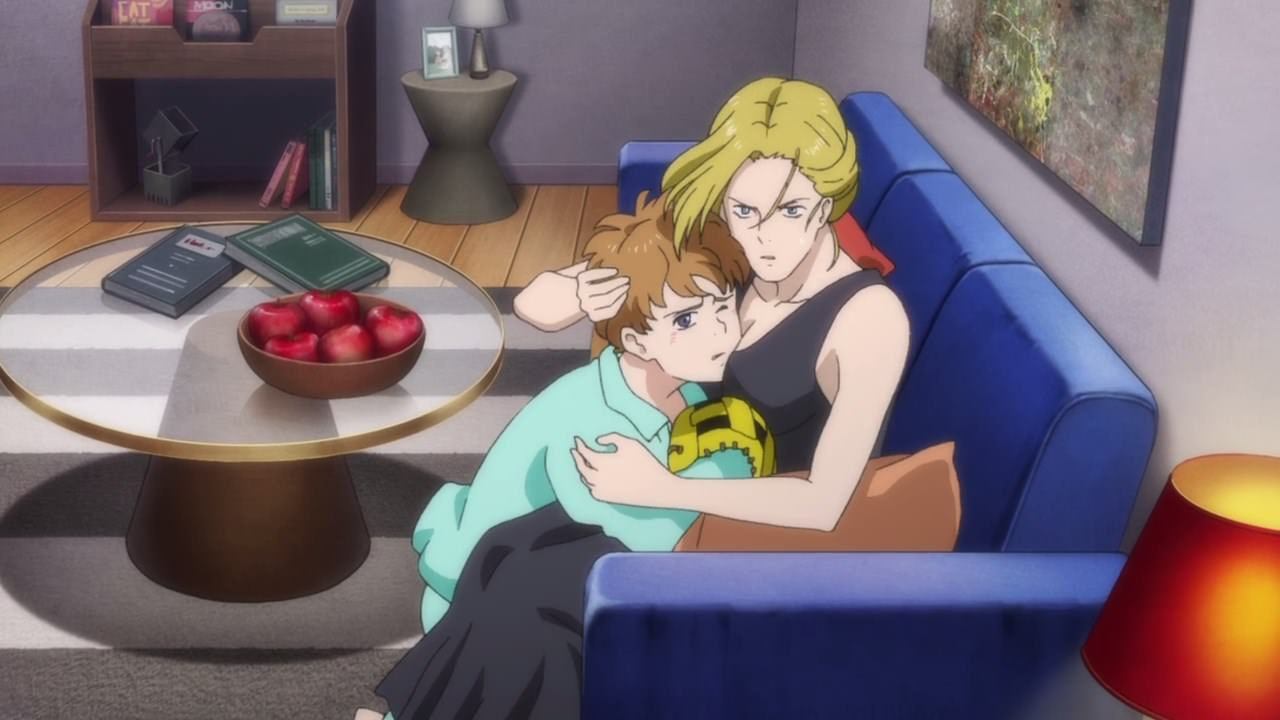 Anyways, looks like this series is getting serious now that Ash Lynx and his buddies are now digging deeper into a conspiracy… and it’s all because of a single drug that killed Griffin.

I’m hoping that everything will be fine on the next episode, but I doubt that since I need to watch someone die!