Free! Dive to the Future Episode #11 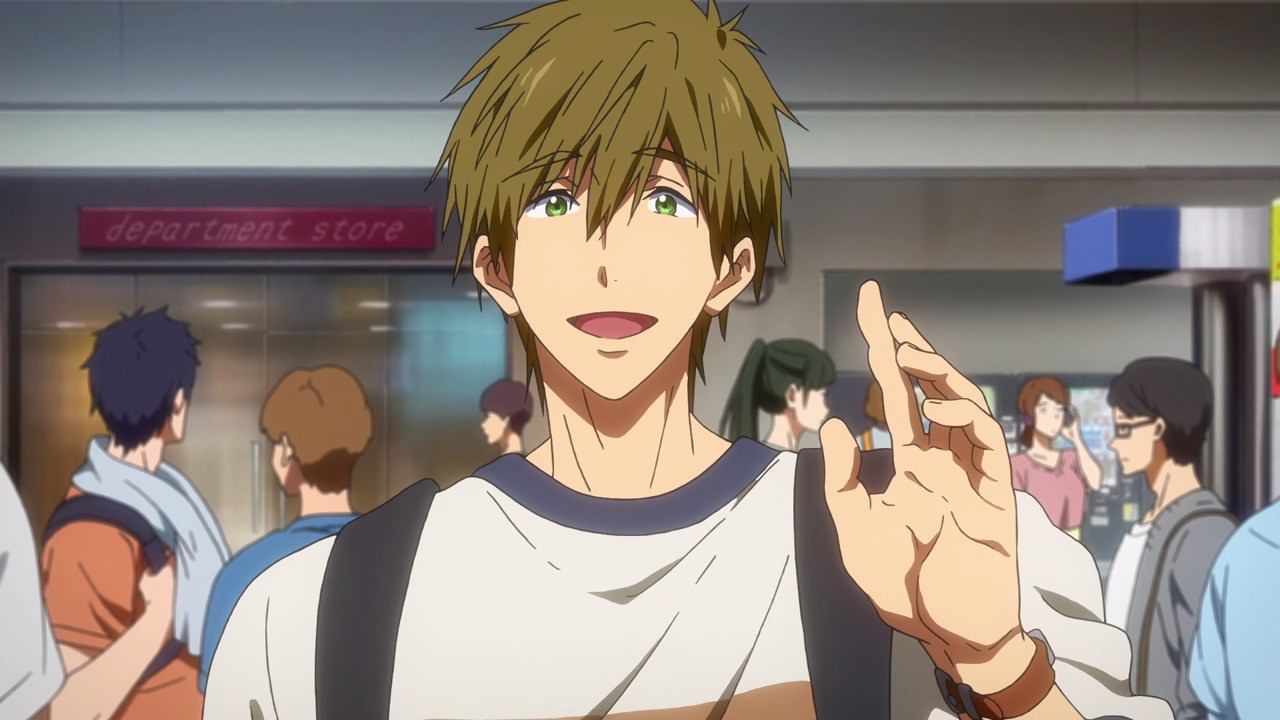 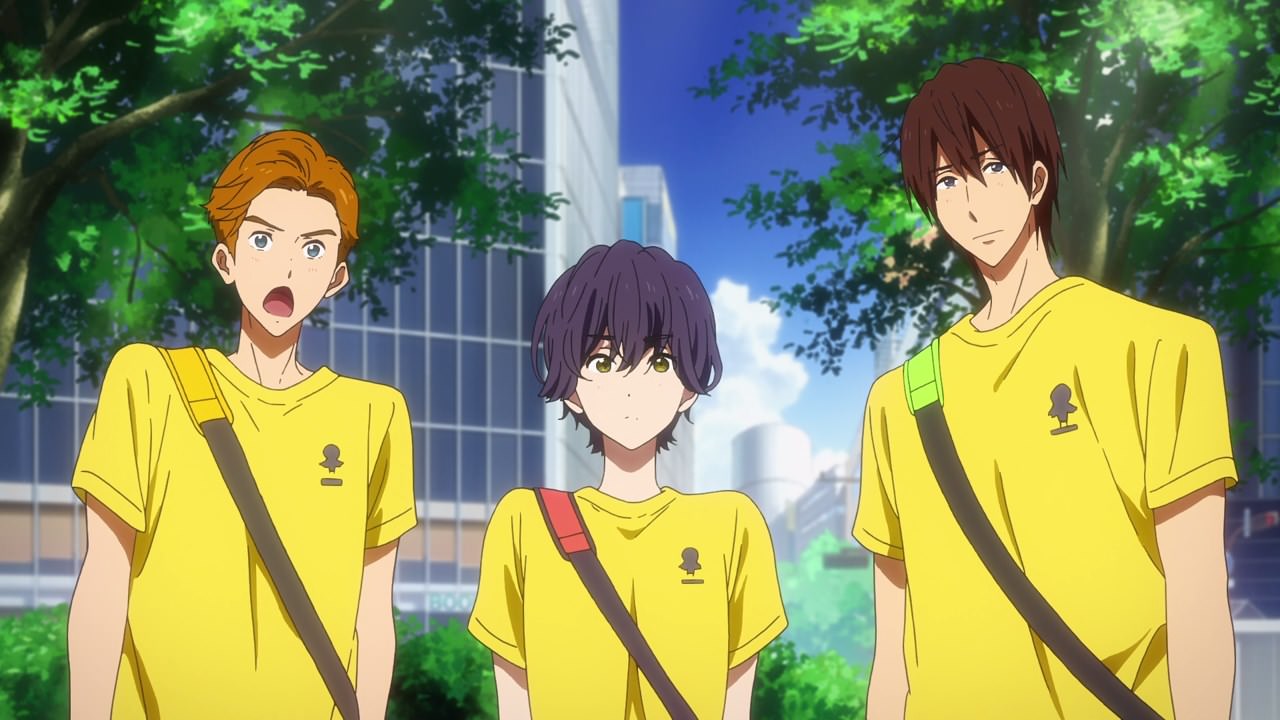 This is Makoto Tachibana as he’s here to say hi to his new members of the Iwatobi High School’s Swim Club. Of course, Romio, Ayumu, and Shizuru are somewhat nervous upon meeting an alumnus.

Still, both Romio Hanahune and Shizuru Isurugi will have their chance on qualifying for the nationals next year. Right now, they’re just gonna cheer both Nagisa Hazuki and Rei Ryugazaki. 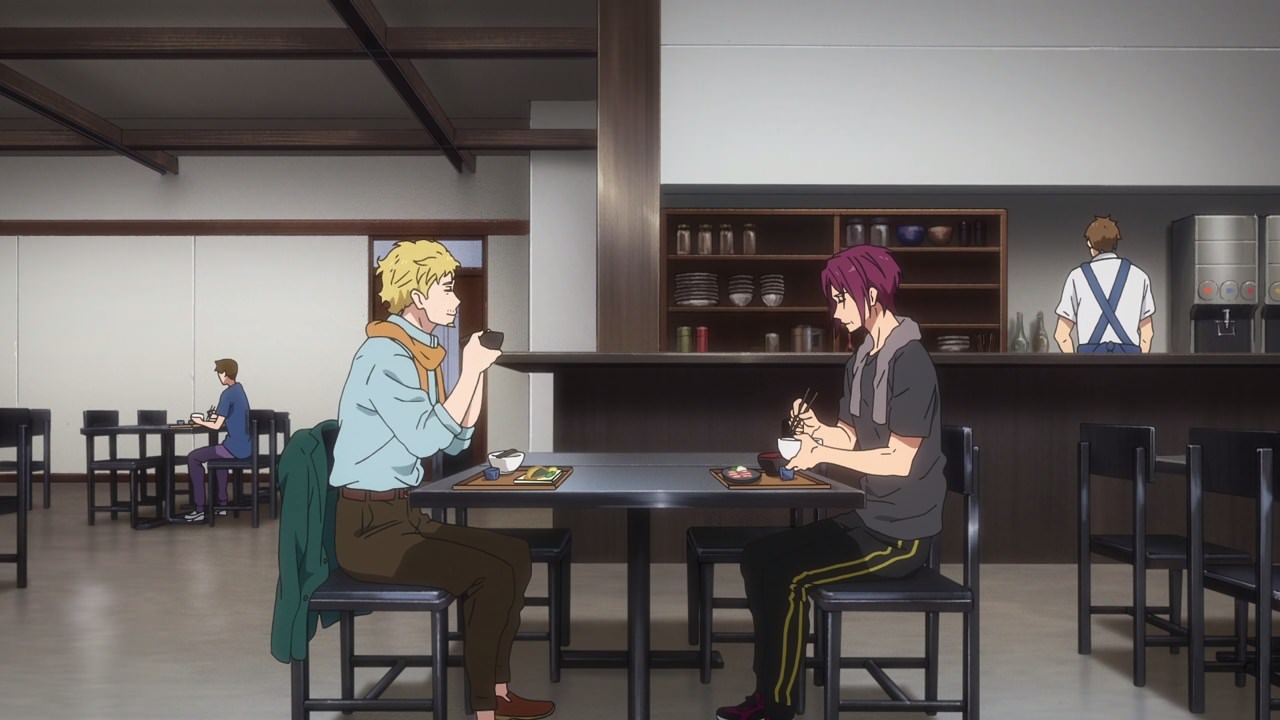 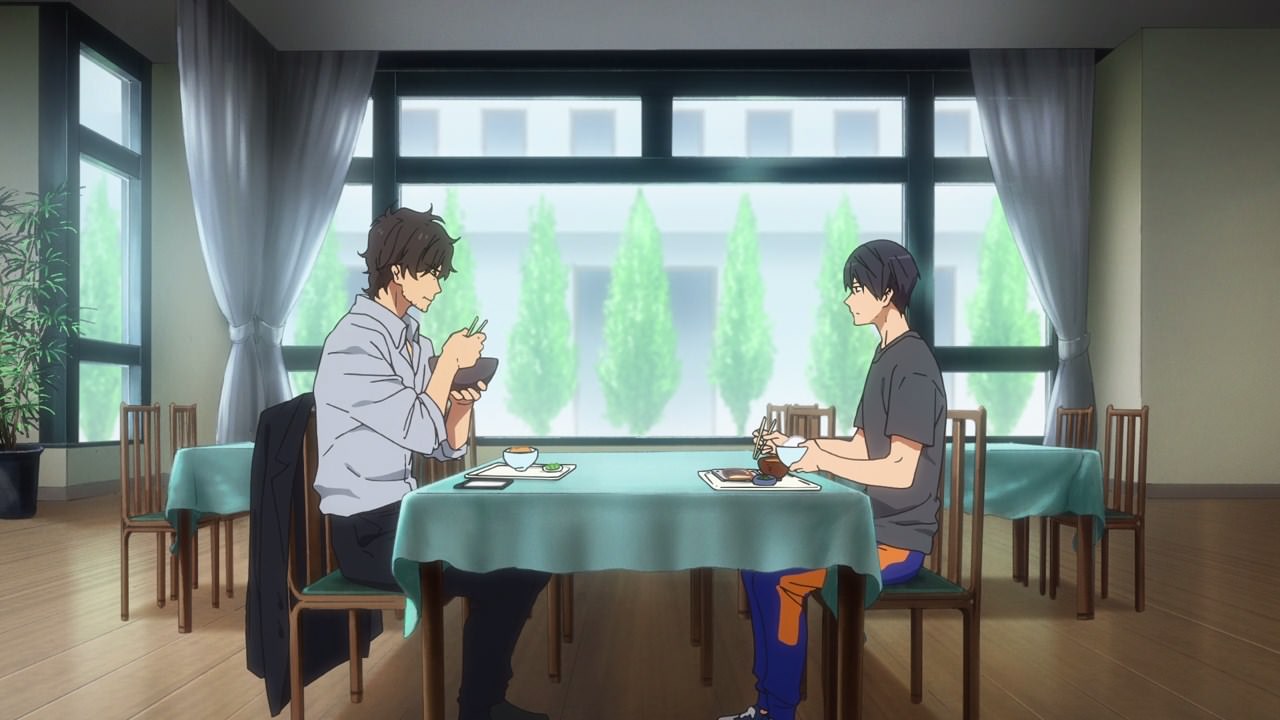 Meanwhile, here’s both Rin Matsuoka and Haruka Nanase where they spend their time with their respective coaches. They’ll sure get back to training, but everything else feels so quiet. 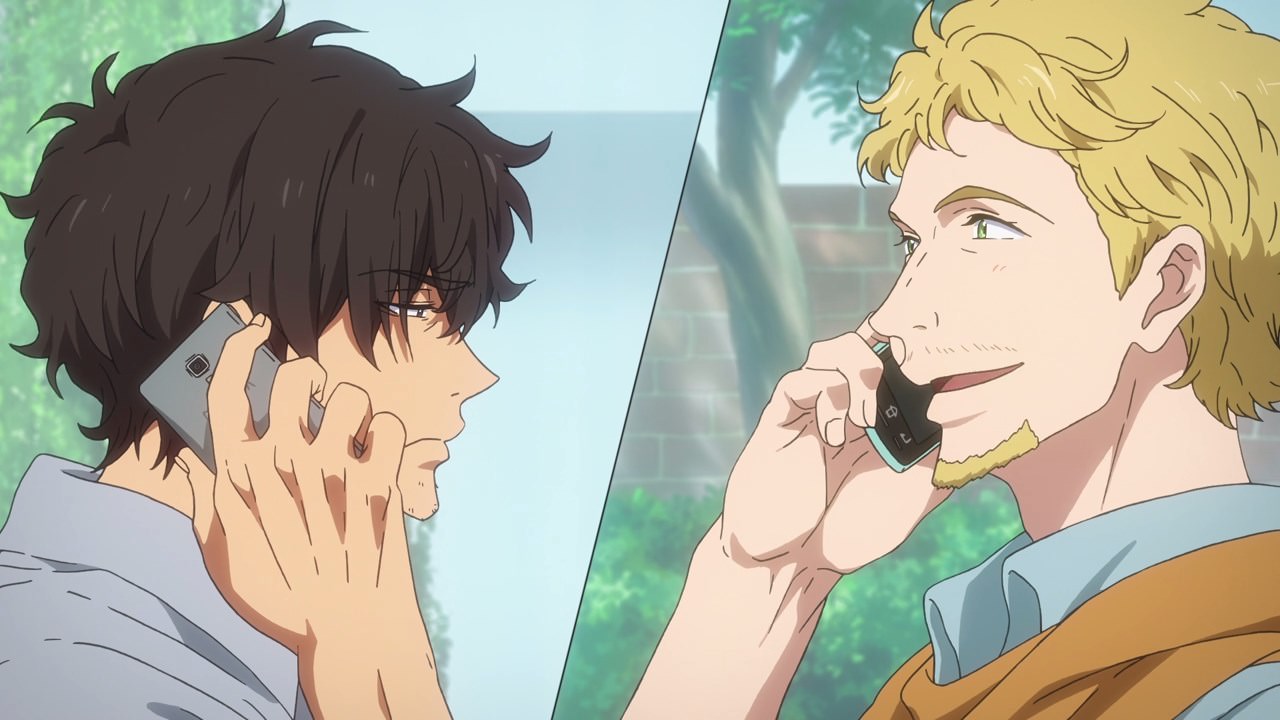 That’s until Mikhail Makarovich called Ryuuji Azuma in which he wants to say hi to his rival. Then again, Ryuuji-san is somewhat annoyed towards a muscle freak like Mikhail. 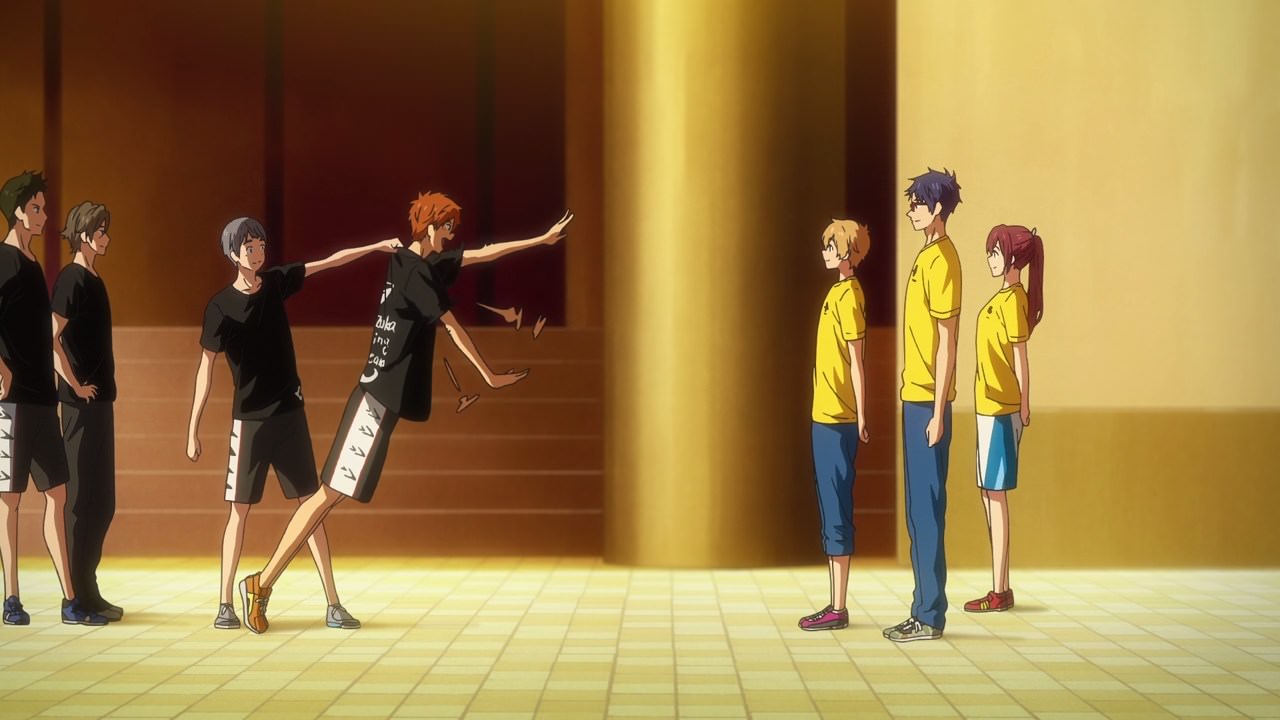 Now let’s go back to the Iwatobi High’s Swim Club when they met their Samezuka counterparts. Of course, Momotarou Mikoshiba is very happy to see Gou “Kou” Matsuoka since he’s infatuated with her. 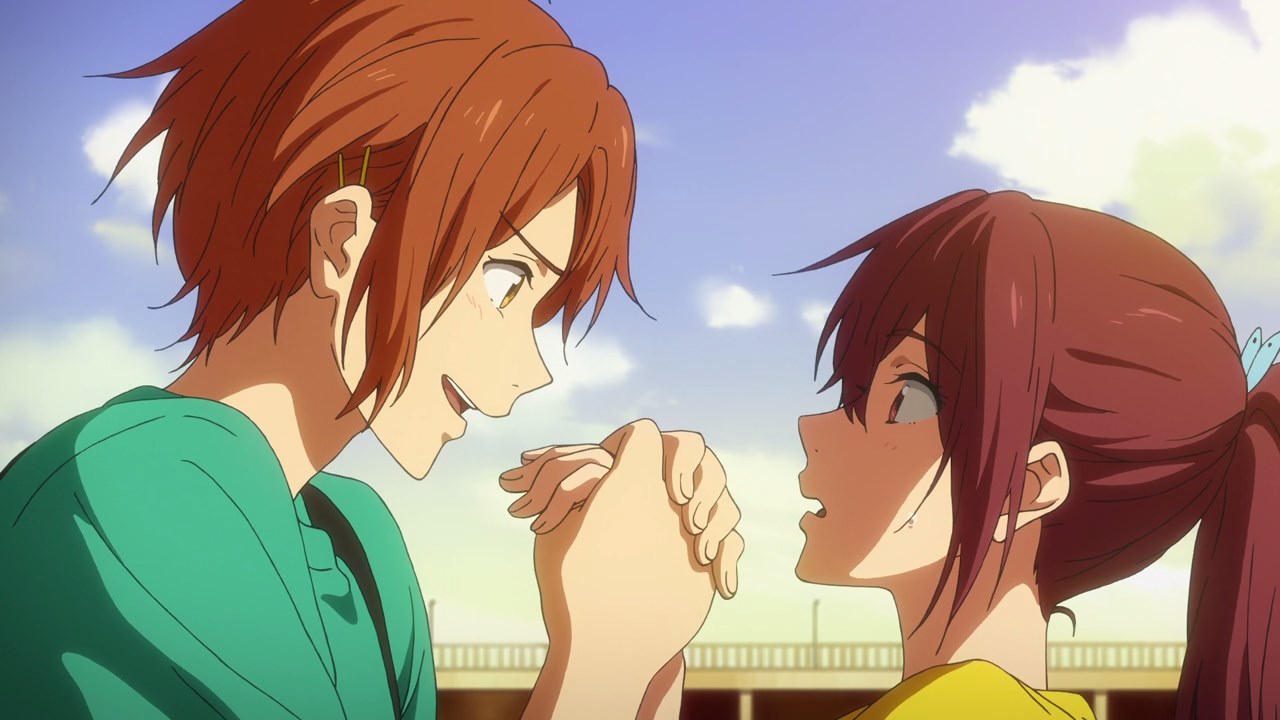 On the other hand, Isuzu Mikoshiba makes an appearance as she finally met her comrade when it comes to muscles. Well Gou-san, I hope you enjoy talking about buff men with Isuzu-san! 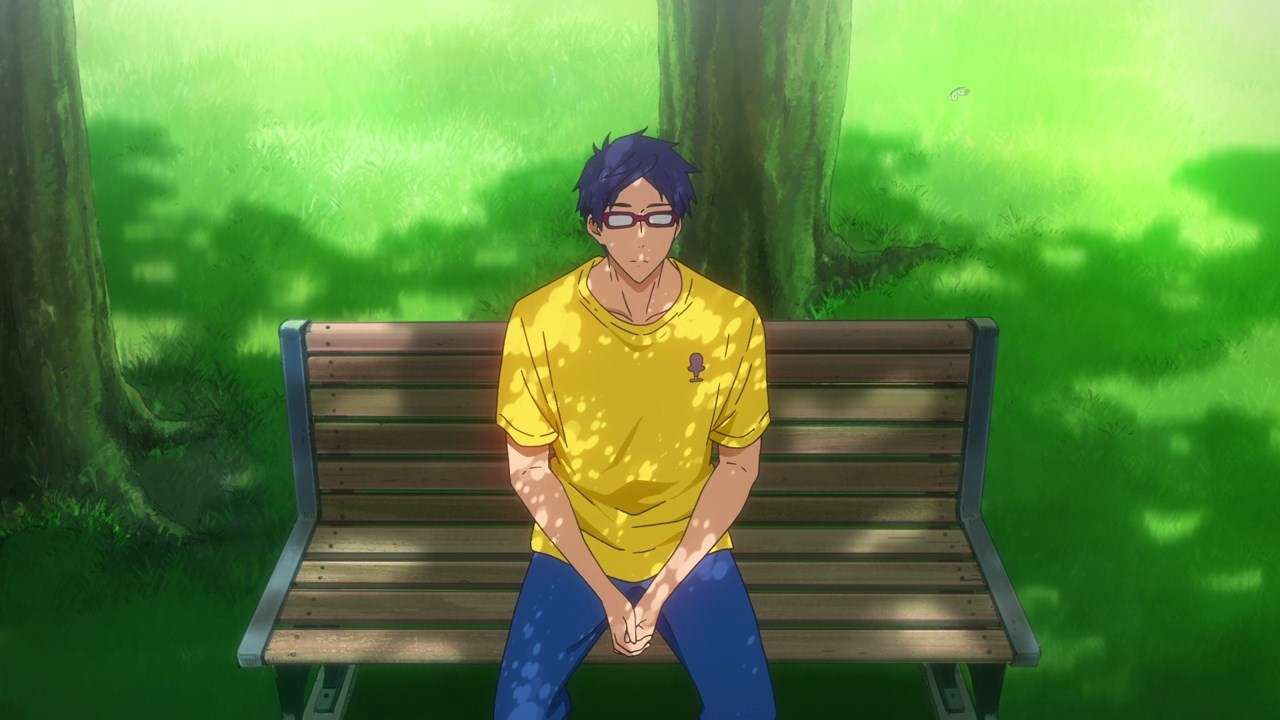 Moving onto the national tournament and while everyone is prepared to win it all, here’s Rei Ryugazaki as he’s somewhat nervous. Was it anxiety that he might not make it farther or something else? 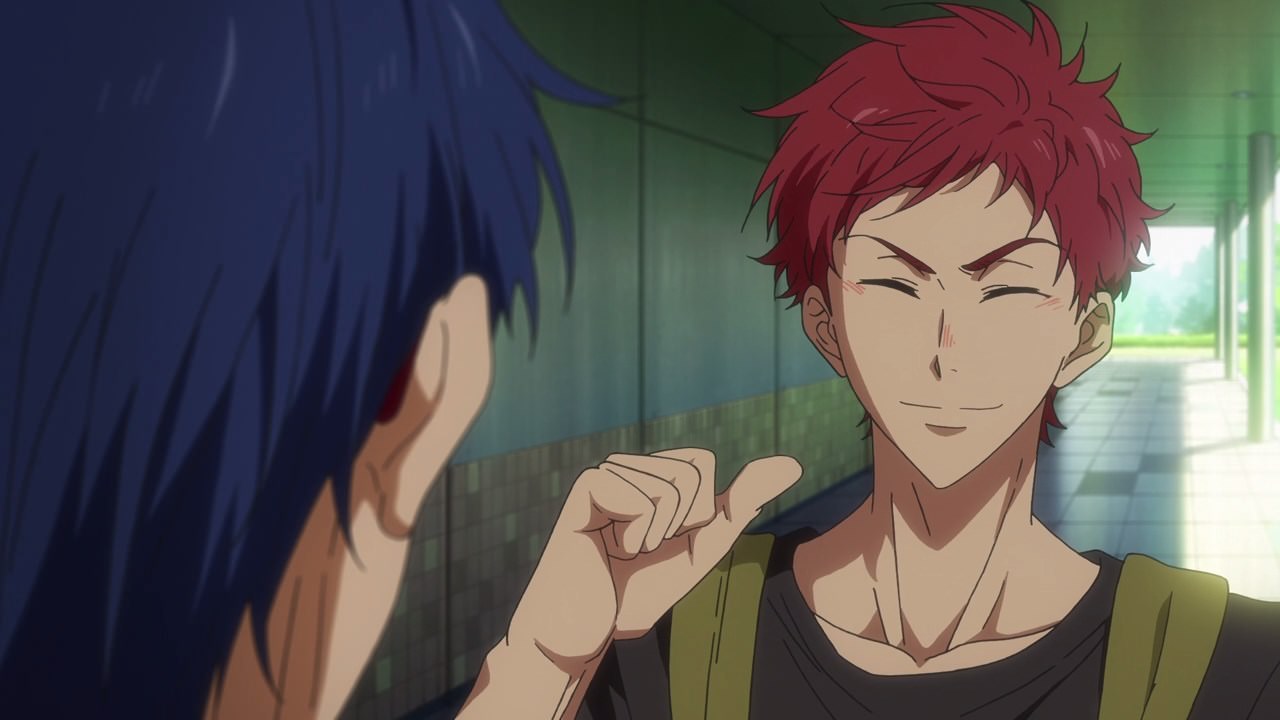 Fortunately, seems that Rei’s worries have gone away when he met Asahi Shiina, which it turns out that they met before. Man, I have to watch the movies after this! 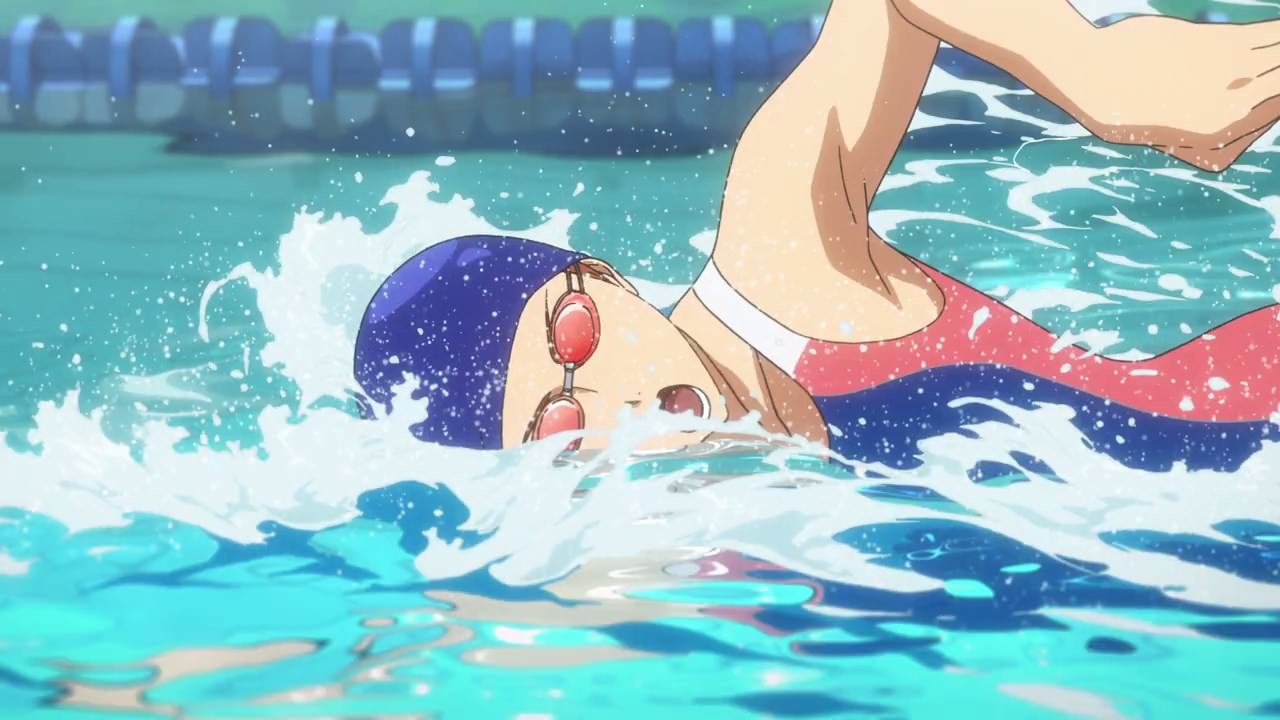 Now then, it’s time to begin the national tournament where we start things off with Isuzu Mikoshiba. I have to admit that she’s not only a good swimmer, but also a cutie! 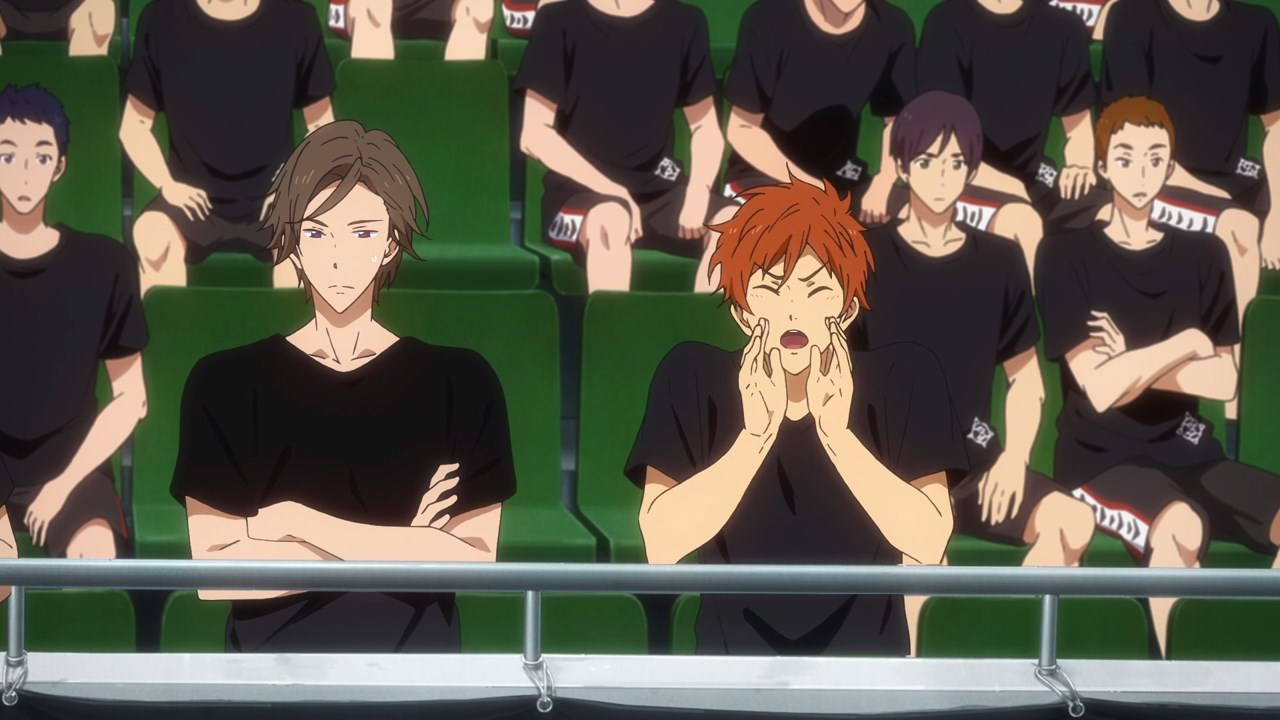 Heck, even Izusu’s little brother Momotarou is cheering her on. I’m hoping that he could do great in his event! 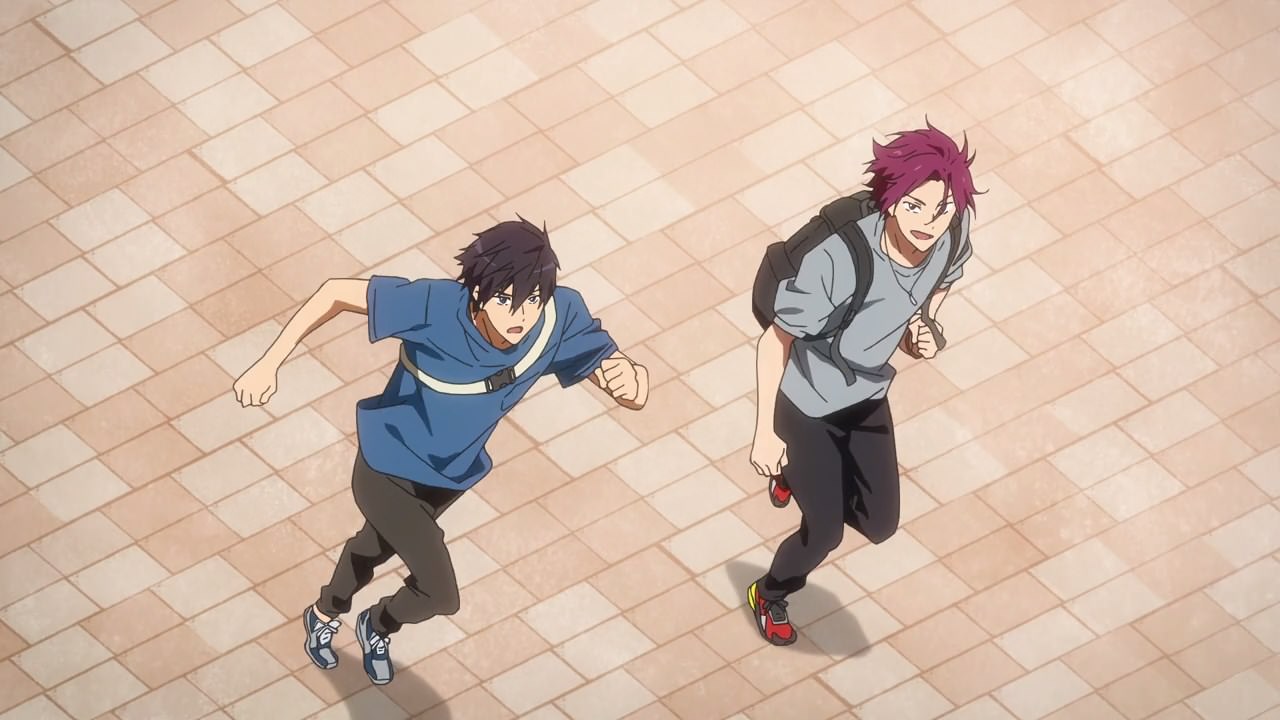 Meanwhile, here’s both Haruka Nanase and Rin Matsuoka where they’re running towards the venue. Let’s hope that they can make it. 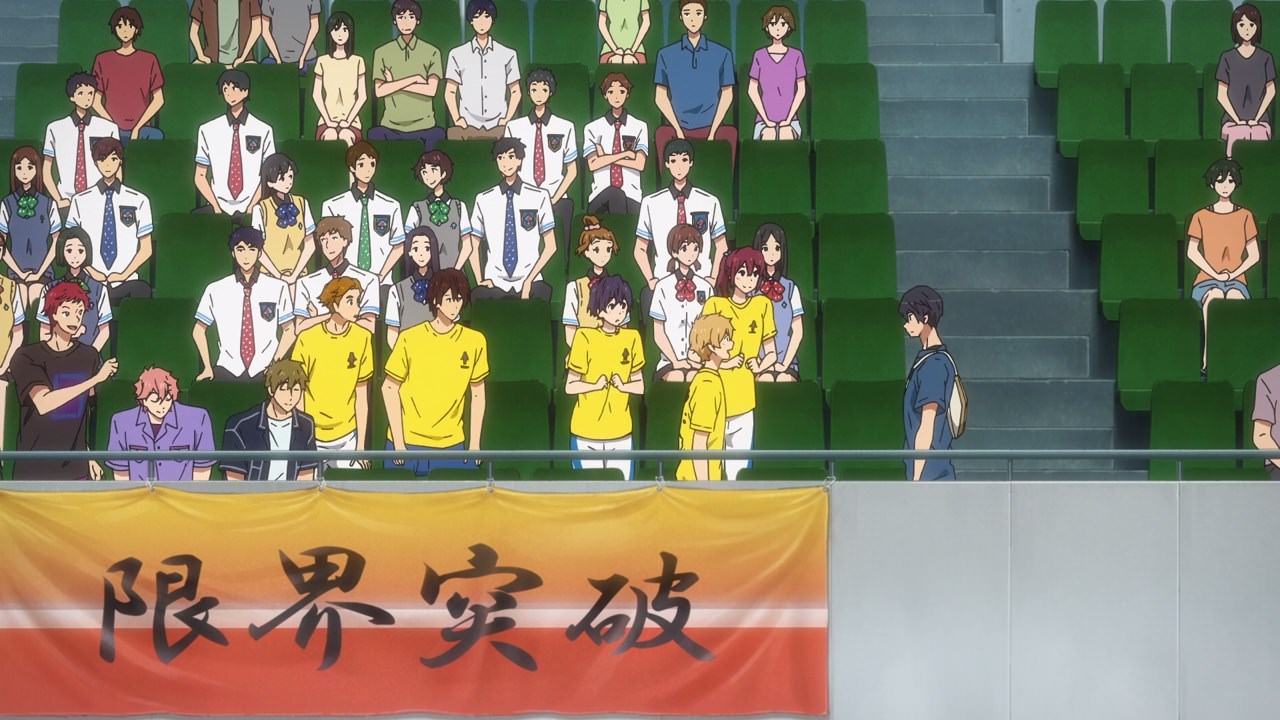 Fortunately, they managed to make it in time for the butterfly stroke event as Haruka Nanase went to the Iwatobi High section to see his buddies. Let’s hope that he won’t miss this moment… 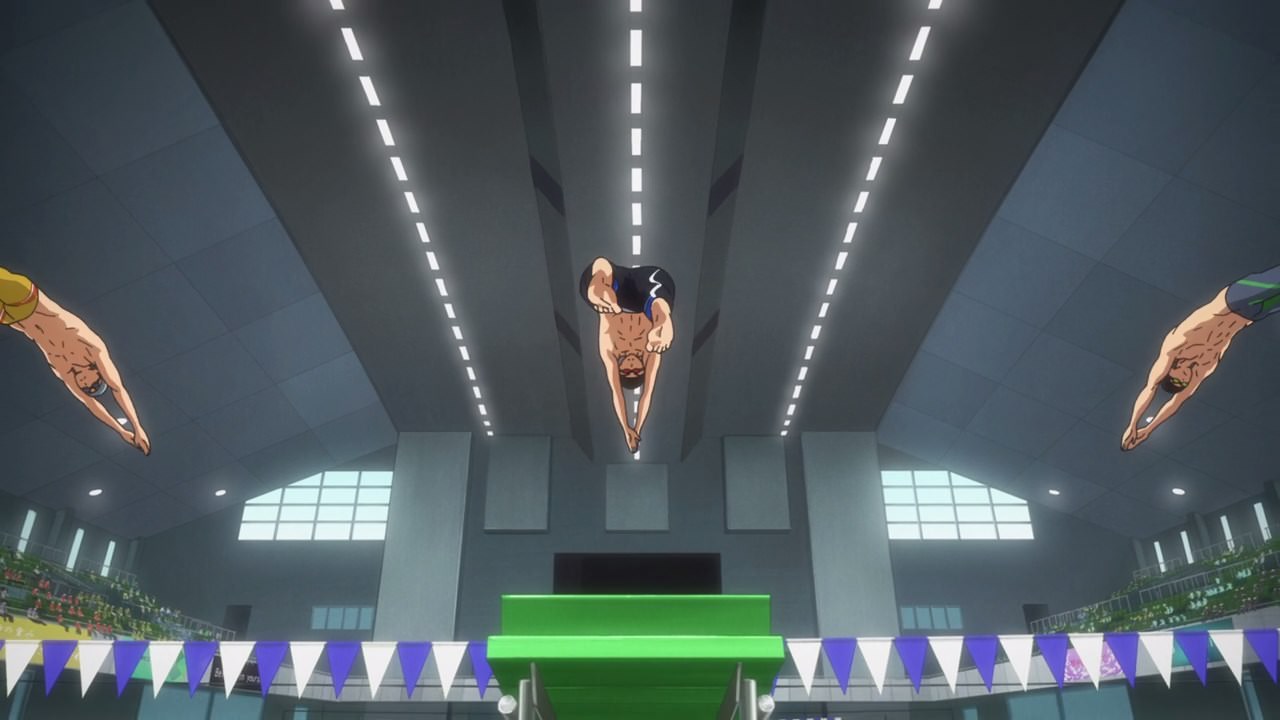 …as the butterfly stroke event begins. For Rei Ryugazaki, this is his last chance of glory as he goes all-out for this event. 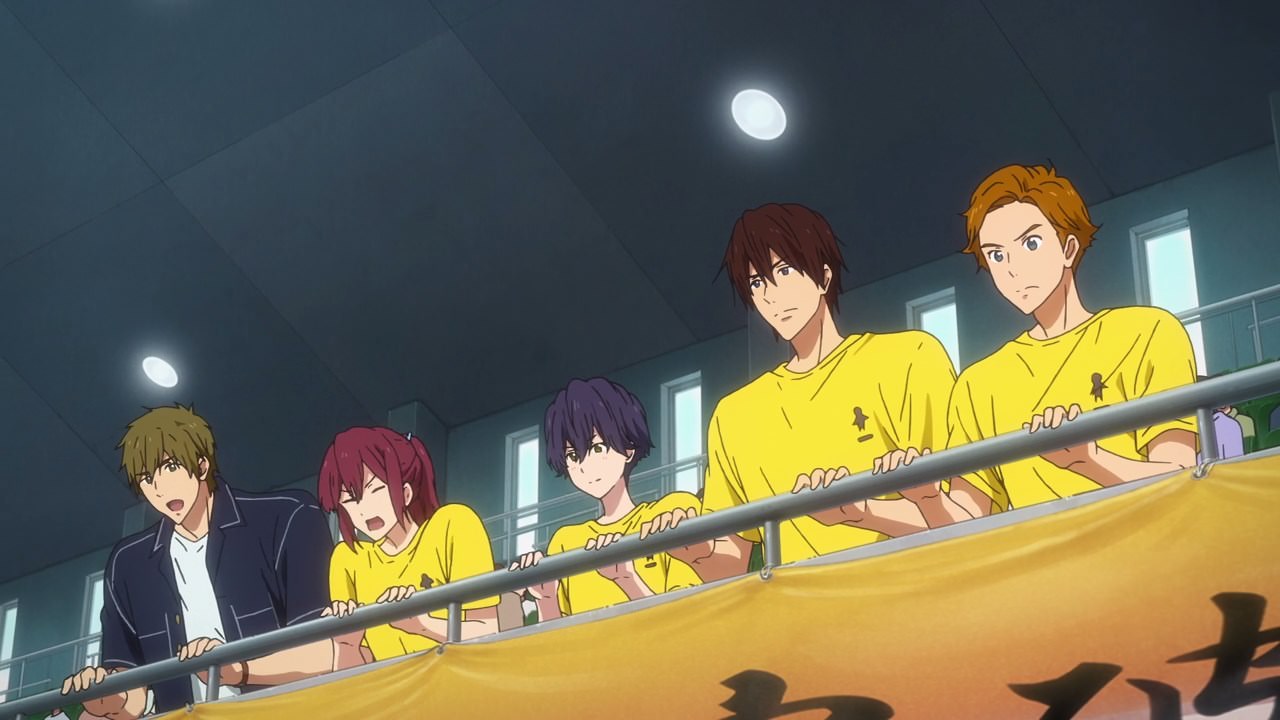 Even his teammates, both former and current, are cheering him on as Rei is moving closer to the finish line. 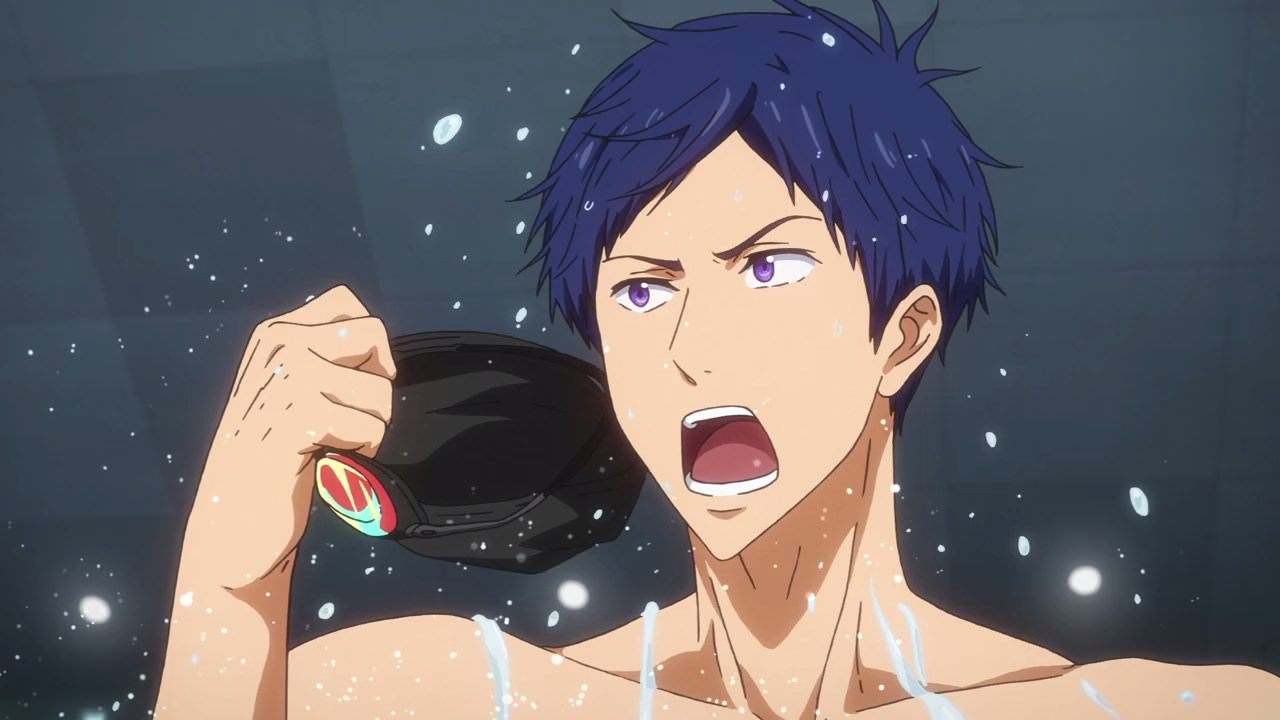 Luckily, Rei Ryugazaki got first place in the 100m butterfly stroke event and broke his personal record. While he didn’t qualify for the finals, Rei didn’t have any regrets on competing in the nationals. 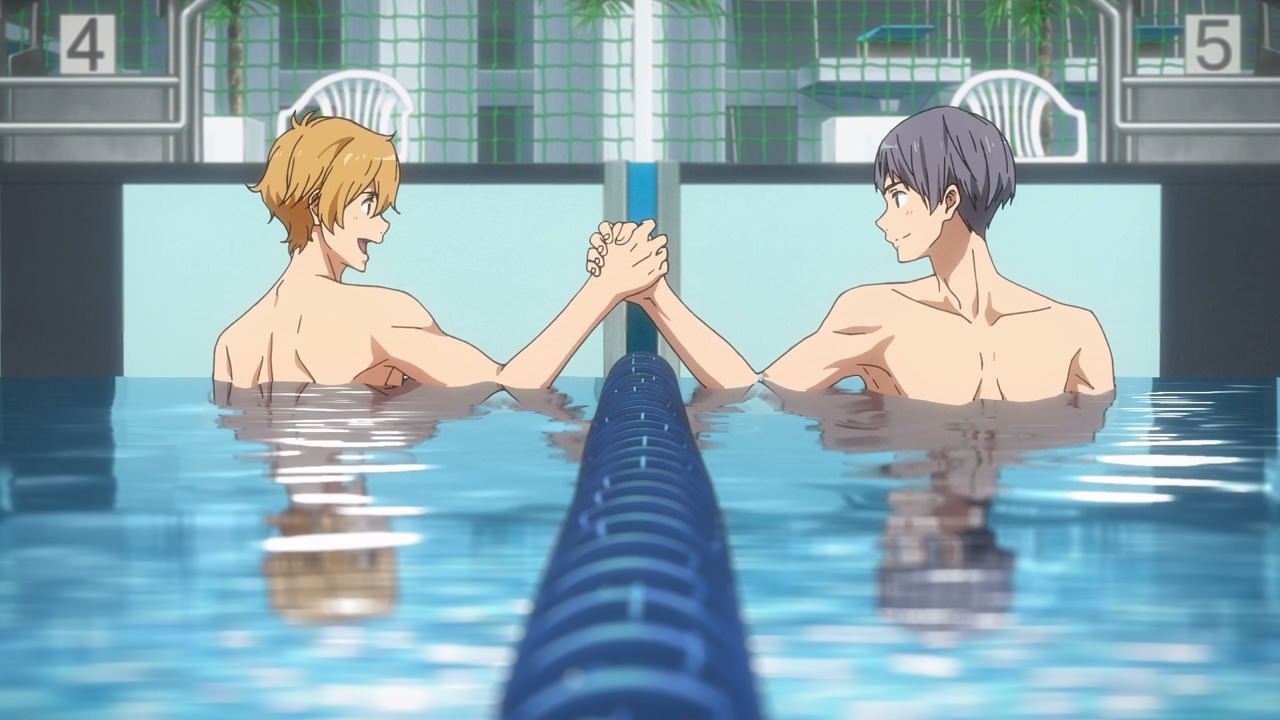 On the other hand, looks like the 100m breaststroke event is finished with Aiichirou Nitori coming on top over Nagisa Hazuki.

While I don’t know if either boys have qualified for the finals, I’m happy that both Nagisa and Aiichirou showed some sportsmanship in the end. Well guys and girls, I’m happy that they did their best in the national tournament! 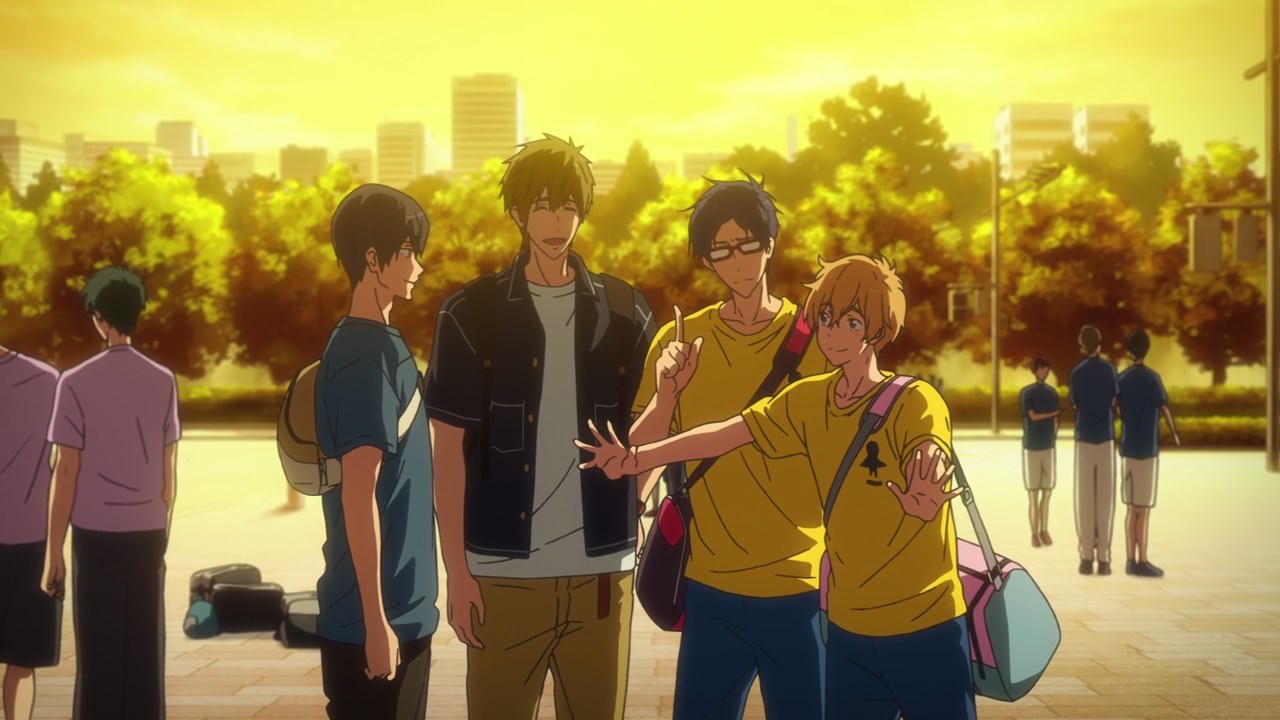 And now, both Nagisa Hazuki and Rei Ryugazaki are currently sharing their stories to both Haruka Nanase and Makoto Tachibana. Isn’t it nice to see them together and talk about their glory days and their future.

With that said, the next episode will be the last one as Haruka Nanase is ready for the All-Japan International. Now that he saw both Nagisa and Rei’s performance, seems that he’s fired up!