Posted on November 4, 2018 by benigmatica 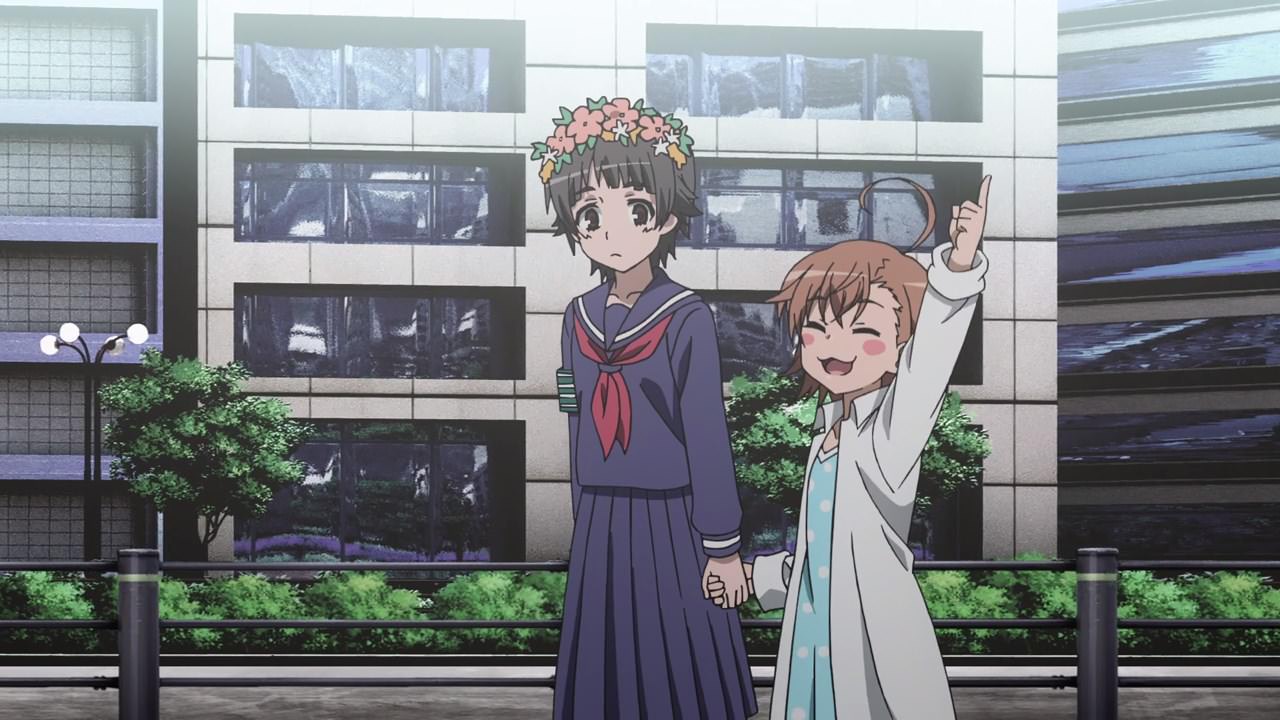 Oh look, it’s Last Order and she’s being accompanied by Kazari Uiharu because she wants to go to the amusement park. Sadly, Last Order won’t be joined by Accelerator because he has business to take care of.

By the way, if you’re curious on what item that SCHOOL actually stole from the previous episode, I’ll tell you now and I’ll show you what it looks like. 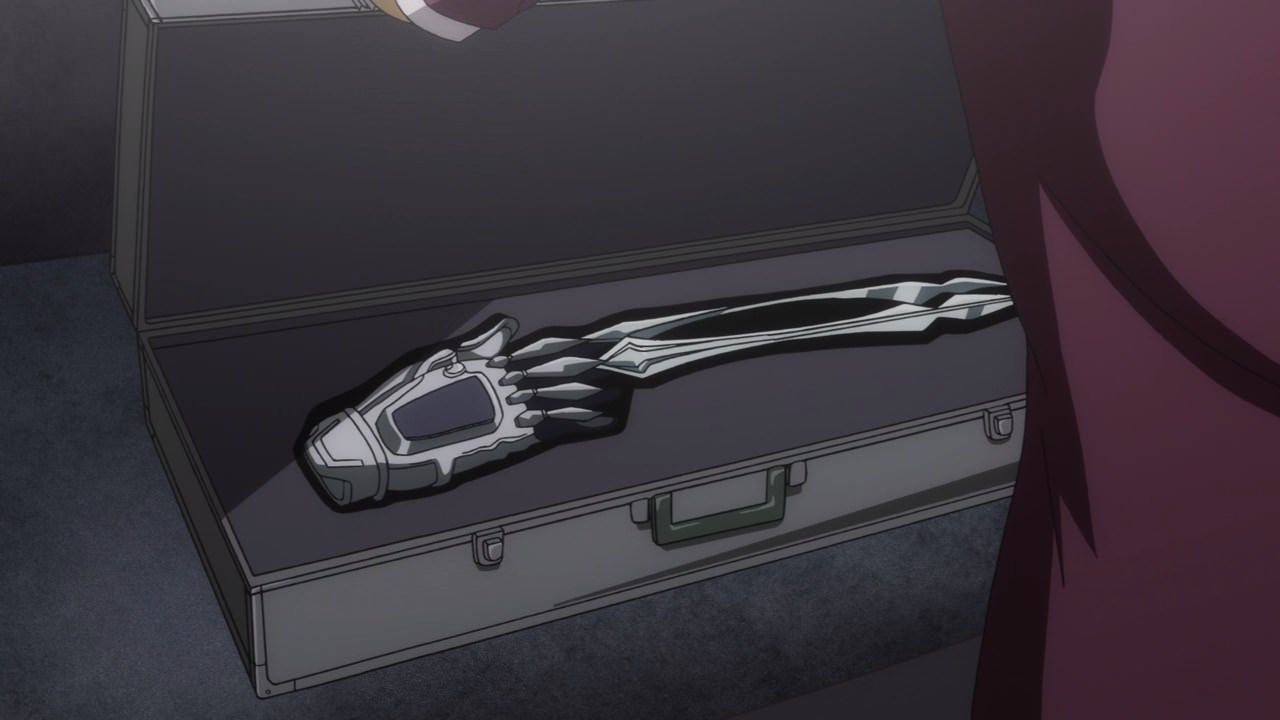 Anyways, this is the nano-particle object interference adsorption manipulator, also called Tweezers because this gauntlet has two extensions to both index and middle fingers.

Hence, you can use this thing as a pair of deadly tweezers and it’s also used to gain access to Aleister Crowley’s domain for some reason. 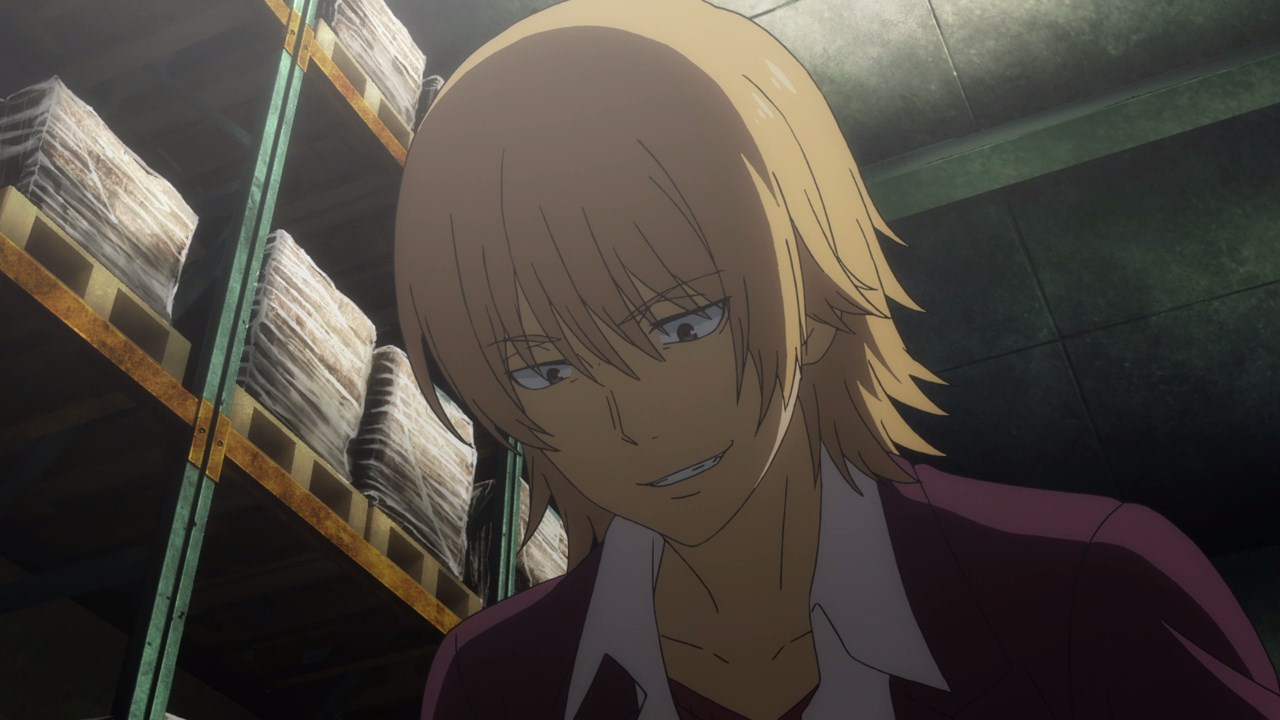 Now then, I would like to introduce you to Teitoku Kakine, another Level 5 esper who’s also the leader of SCHOOL.

Yup, he’s calling the shots of not only assassinating Monaka Oyafune in the previous episode, but Teitoku managed to get his hands on the nano-particle object- Dammit, I’m just gonna call it as Tweezers! 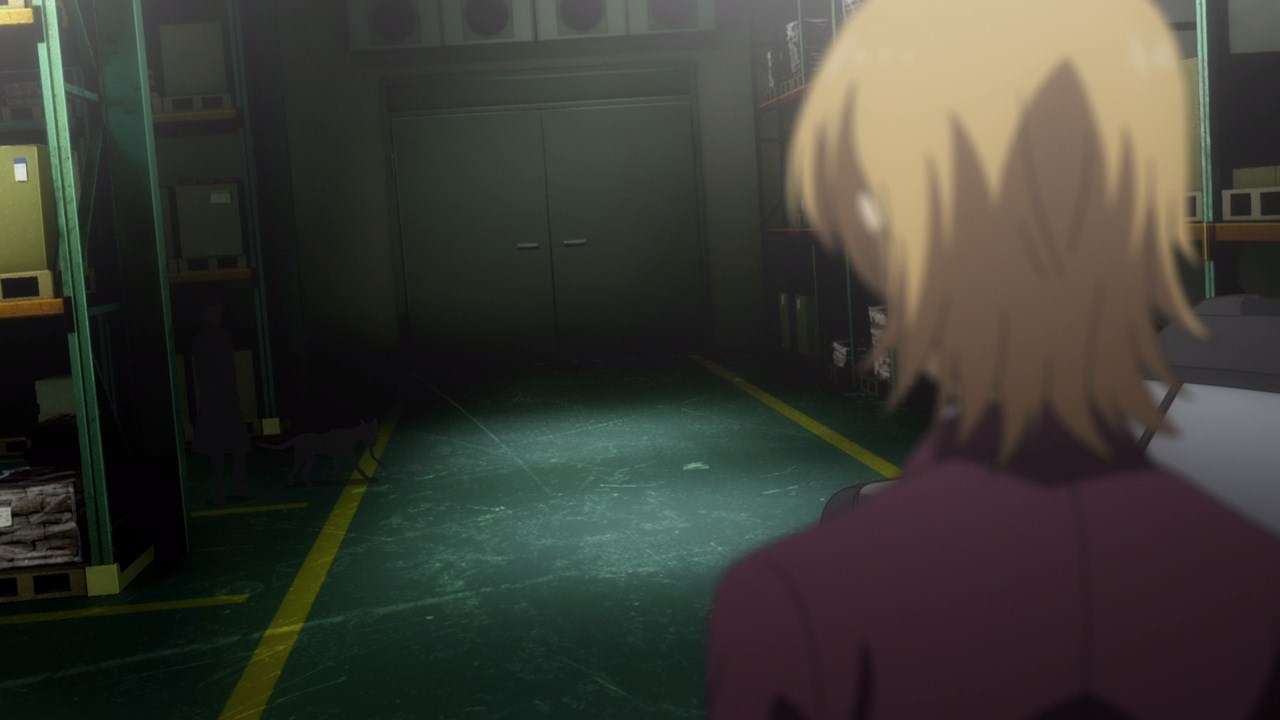 On the other hand, seems that someone is interrupting Teitoku Kakine as a member of MEMBER appeared. Man, what’s with these organization names? Are they making an RPG on this anime? 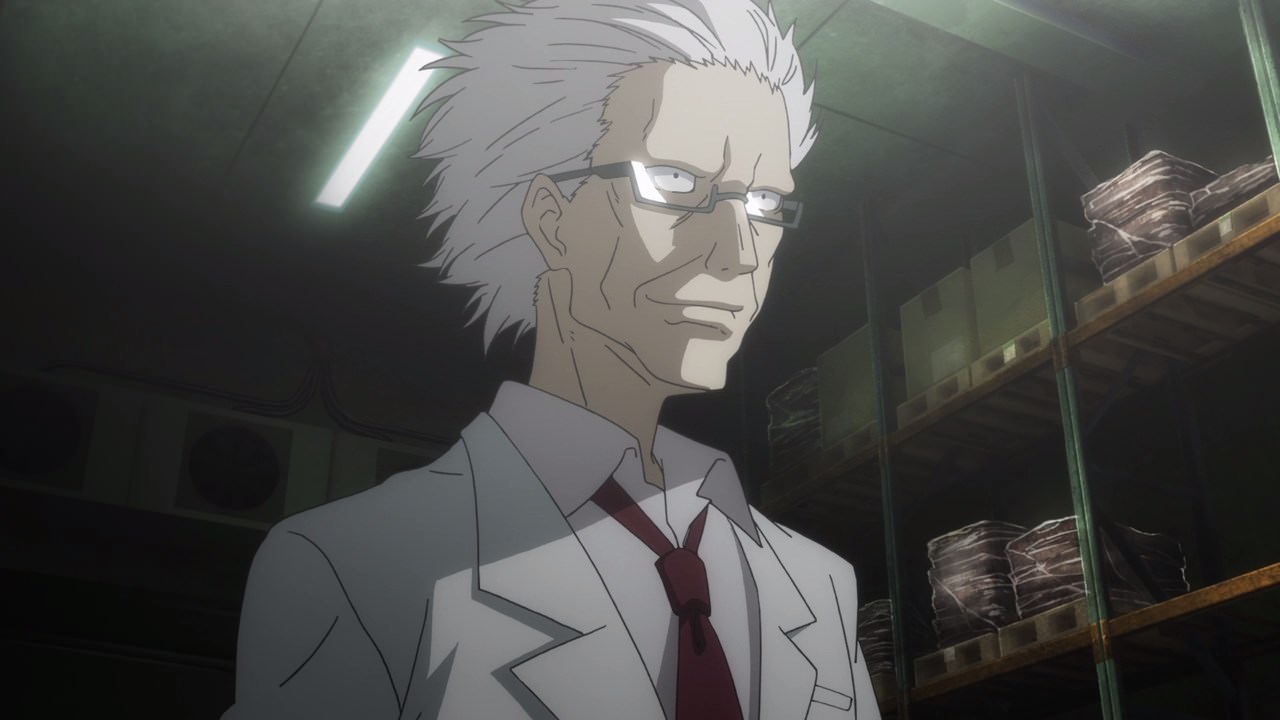 Anyways, this is the Professor and he’s here to take those Tweezers back from Teitoku’s hands. After all, MEMBER doesn’t want a rival organization roam free inside Academy City. 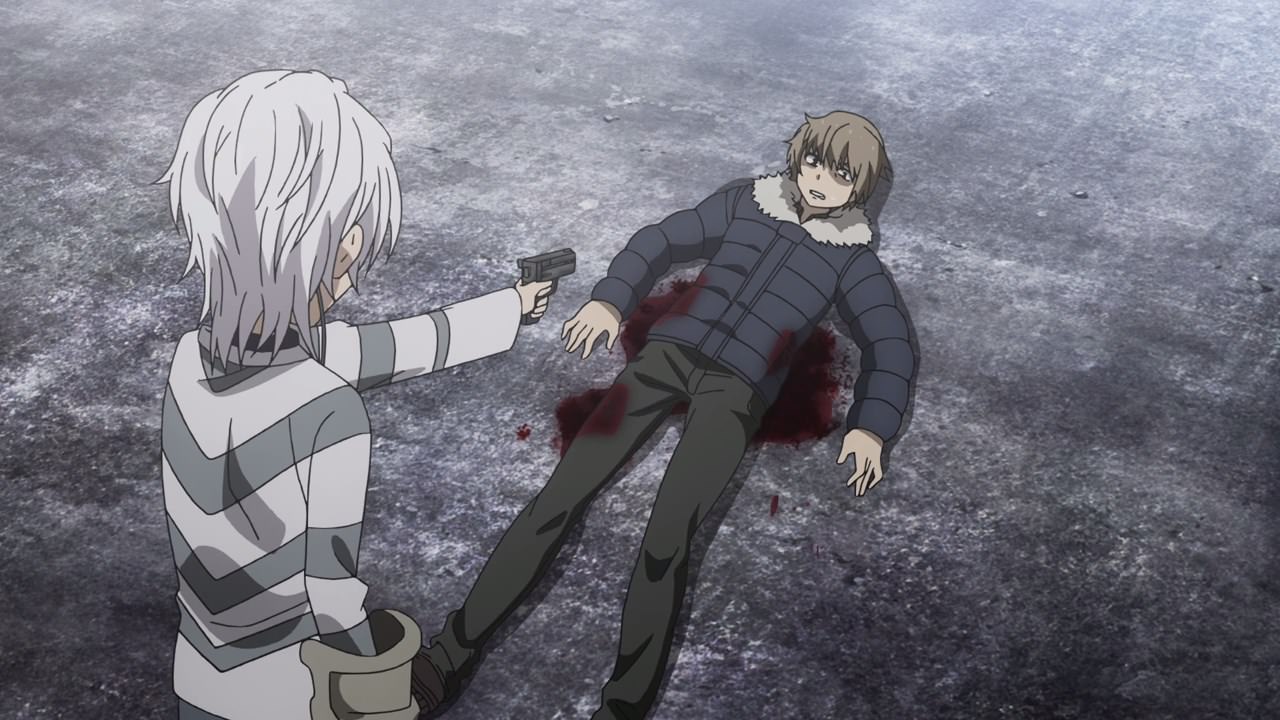 However, seems that MEMBER is having some trouble with Saraku getting cornered by a certain Accelerator. 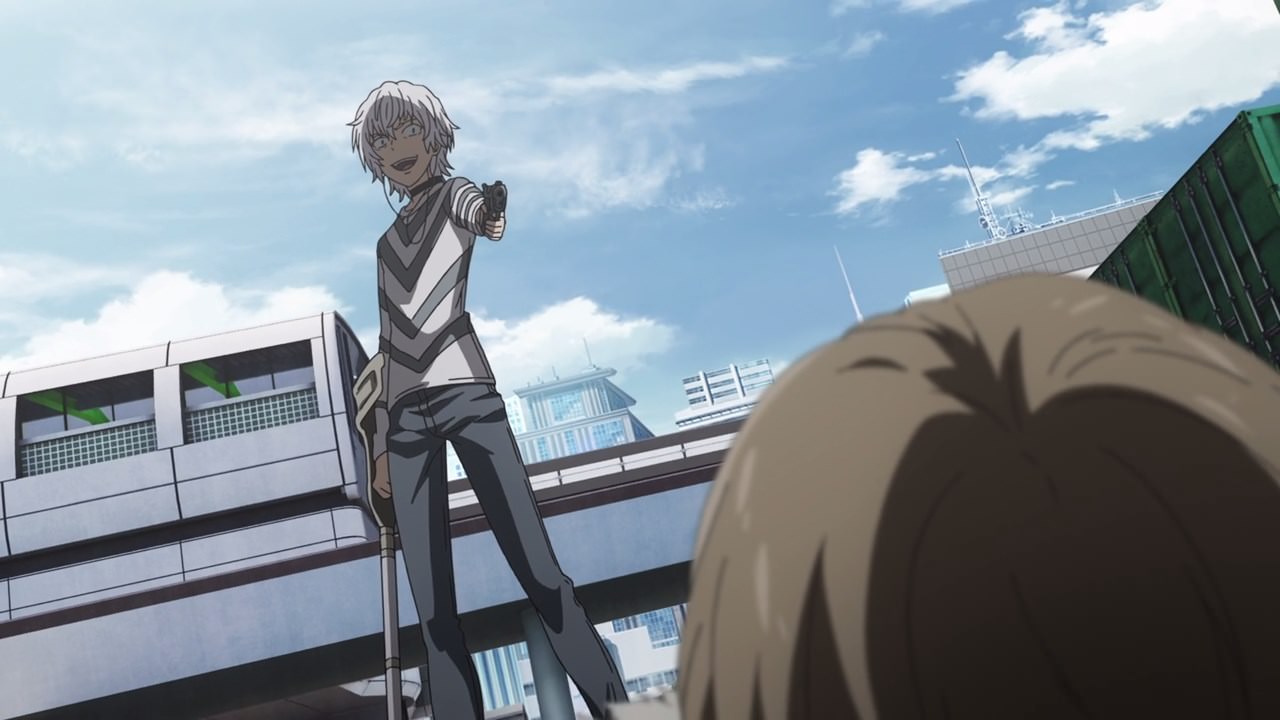 That’s right, this Level 5 esper doesn’t give a fuck about Saraku and his teleporation ability as he can just use his vector-bending powers to hit his target. Basically, Saraku is fucked up! 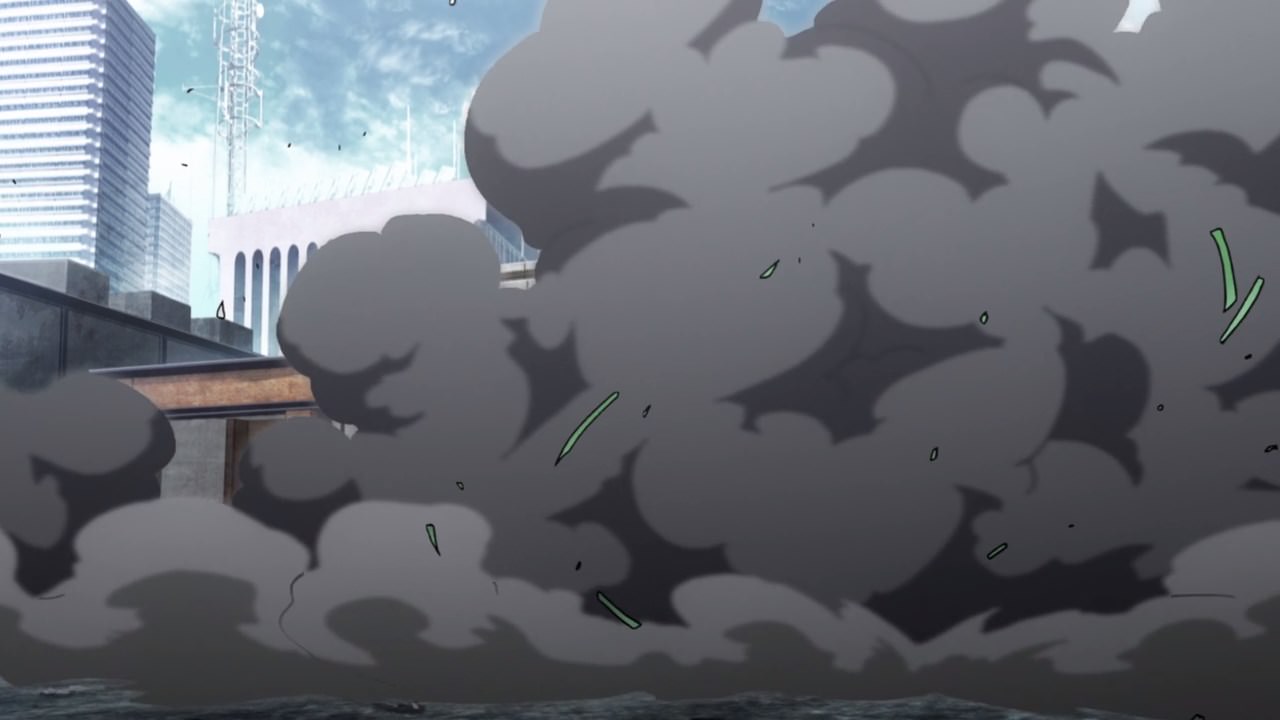 Meanwhile, let’s go back to Teitoku Kakine as he finished beating the Professor with a bang! 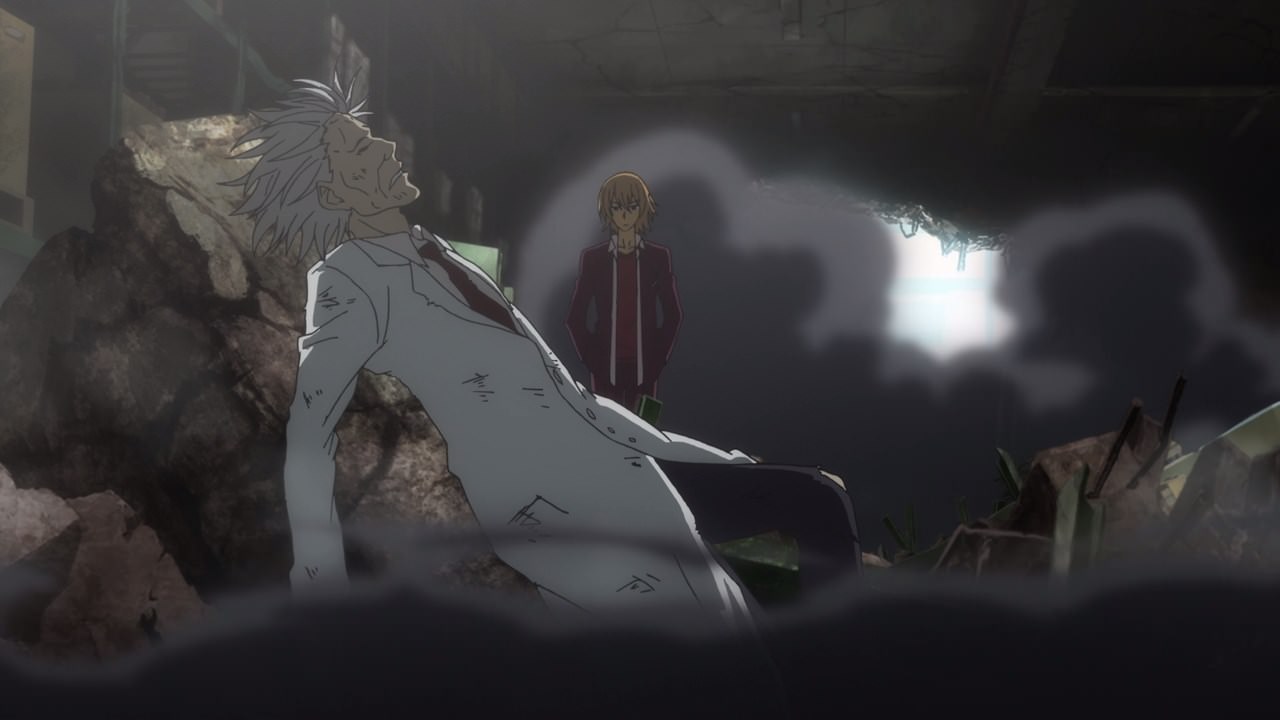 And seriously, the Professor is not that strong compared to Teitoku’s yet-unnamed esper power. With that said, looks like MEMBER is out of the game. 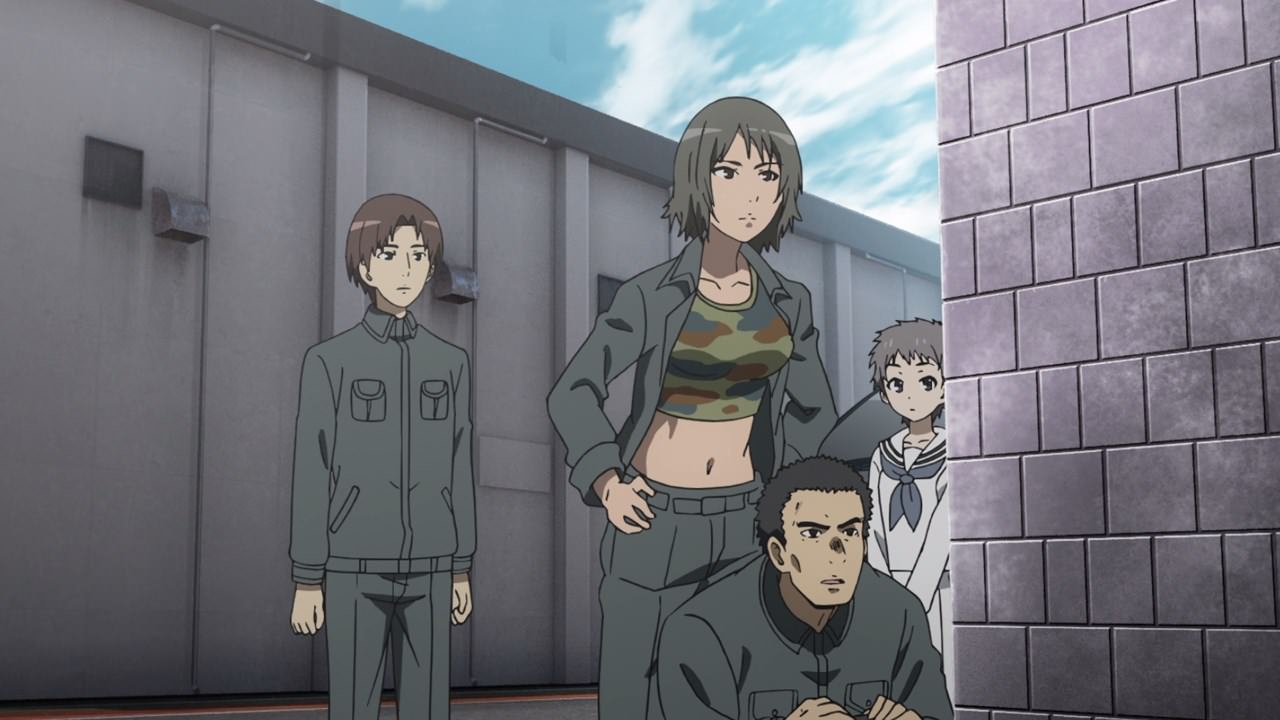 Now let’s move onto another place where we have another group called BLOCK. By the way, these are the ones who want to turn Academy City into an anarchic wasteland with Tatsuhiko Saku and Megumi Teshio leading the charge.

Oh, and they’re accompanied by Yamate and a normal school girl named Tetsumou. Now then, BLOCK is planning to overthrow Academy City into disarray by sending 5,000 mercenaries into the city. 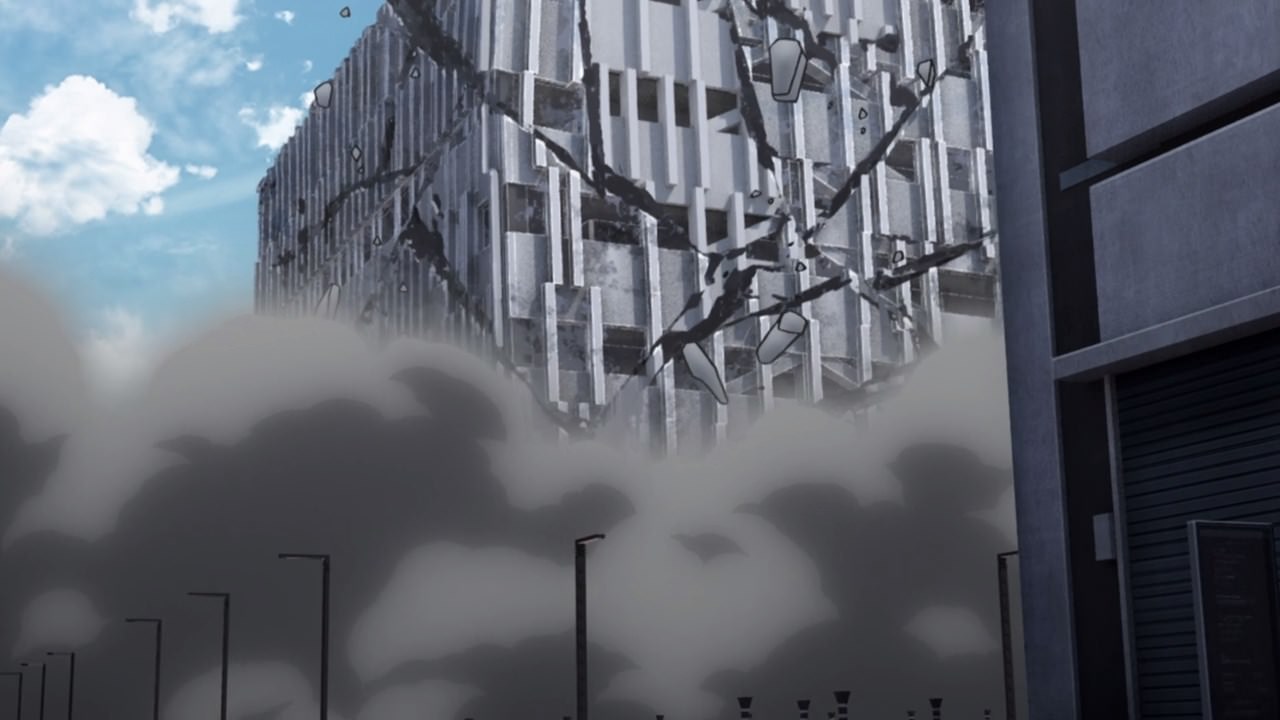 But then, both Tatsuhiko and Megumi are surprised when a building exploded out of nowhere. Man, who would do such a thing? 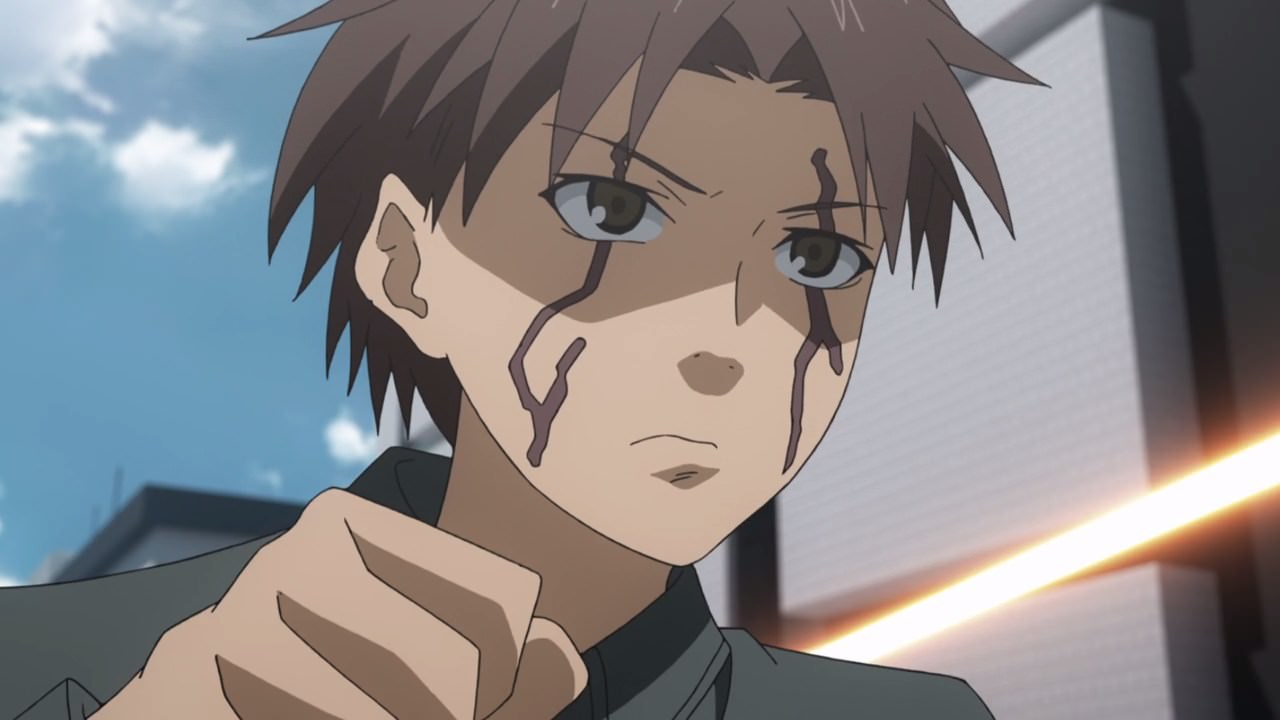 Turns out, it’s Yamate. Just kidding, it’s Mitsuki Unabara as he used his magic powers to disguise himself as one of the BLOCK members by using someone’s skin, as well as using an obsidian knife to destroy an object or even a human being.

By the way, he’s not Mitsuki Unabara as this guy is actually Etzali, using Mitsuki’s appearance as he doesn’t have a real form yet. Man, it’s been a long time since I’ve watched To Aru Majutsu no Index that I couldn’t remember some of the characters. 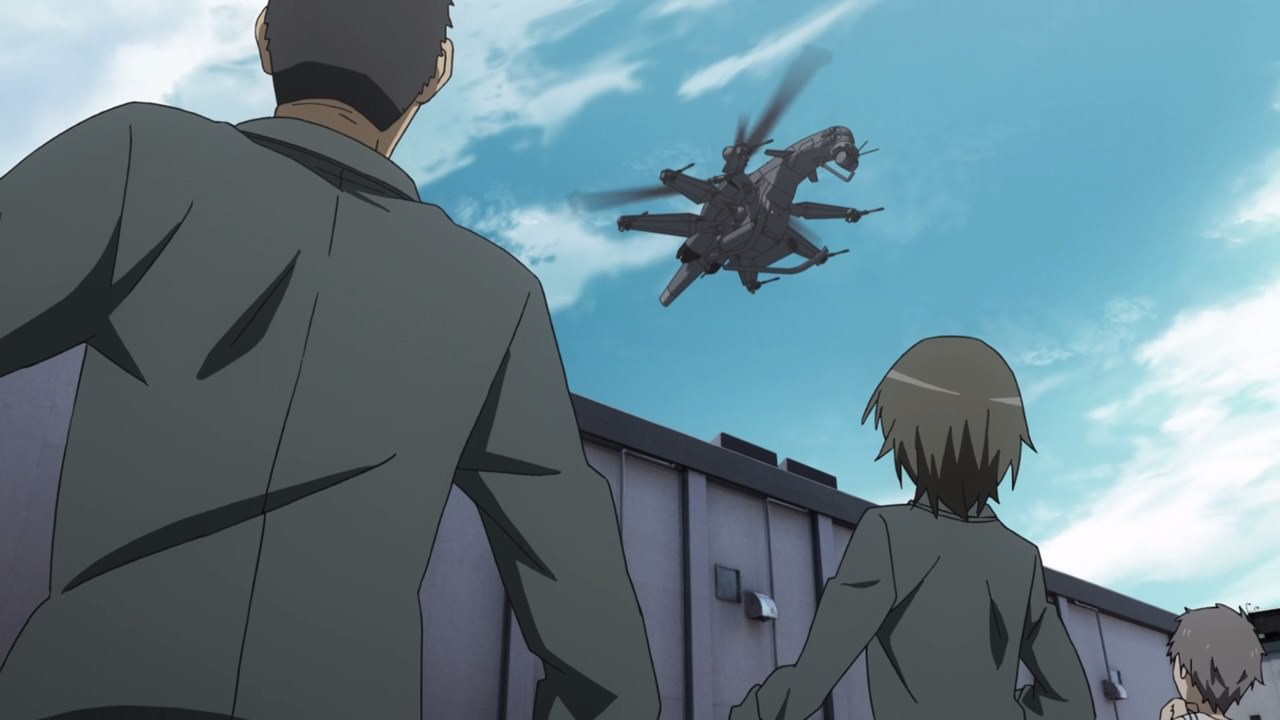 Anyways, Etzali managed to escape thanks to blowing up a building, which the Academy City send their unmanned helicopters to attack the mercenaries. 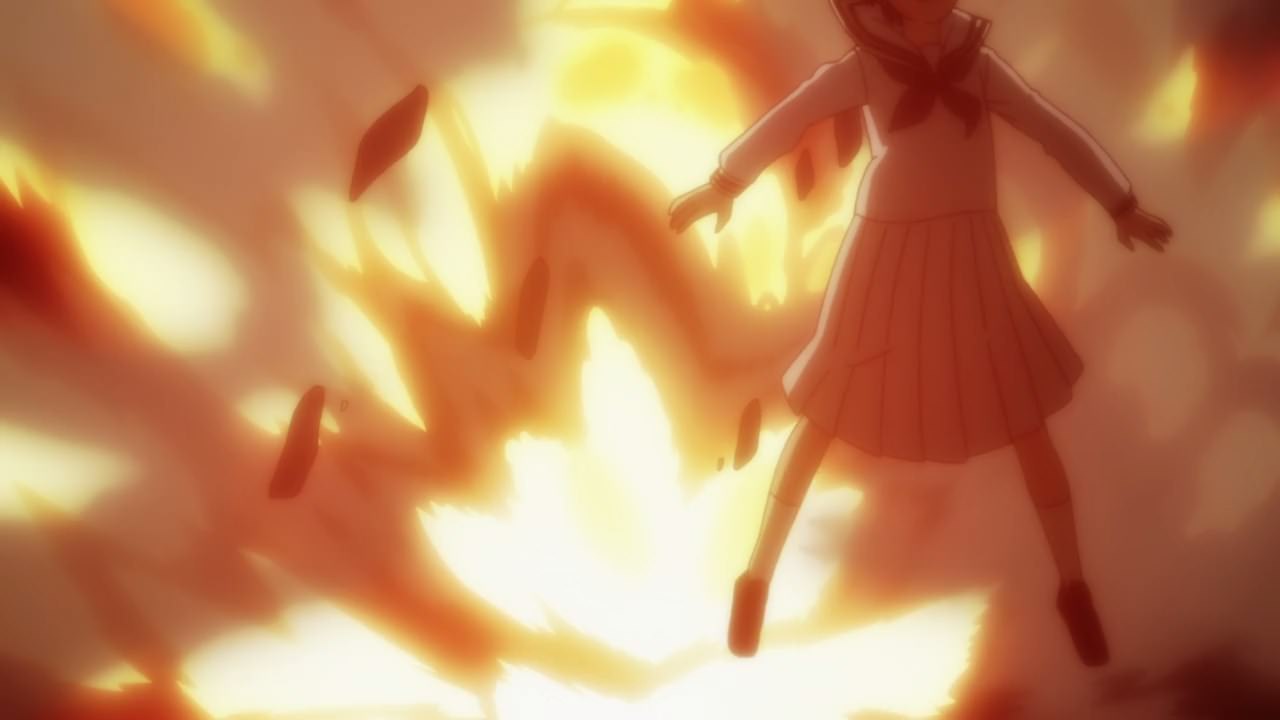 And really, these helicopters won’t spare anyone including Tetsumou, which I believe that she didn’t survive.

In any case, both Tatsuhiko and Megumi made their retreat together with the remaining mercenaries. 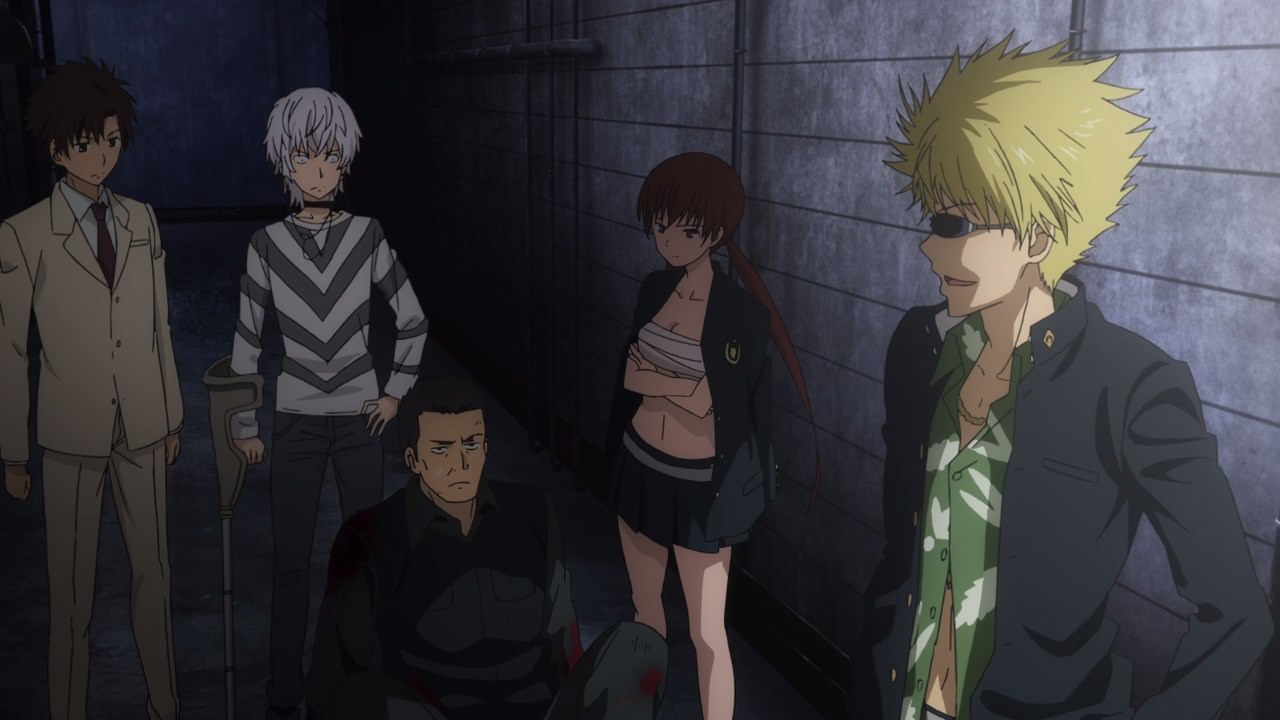 Of course, a few of them got captured by GROUP which they learned about their plan on attacking a juvenile hall at the 10th District, which is part of their greater plan to overthrow the current government of Academy City. 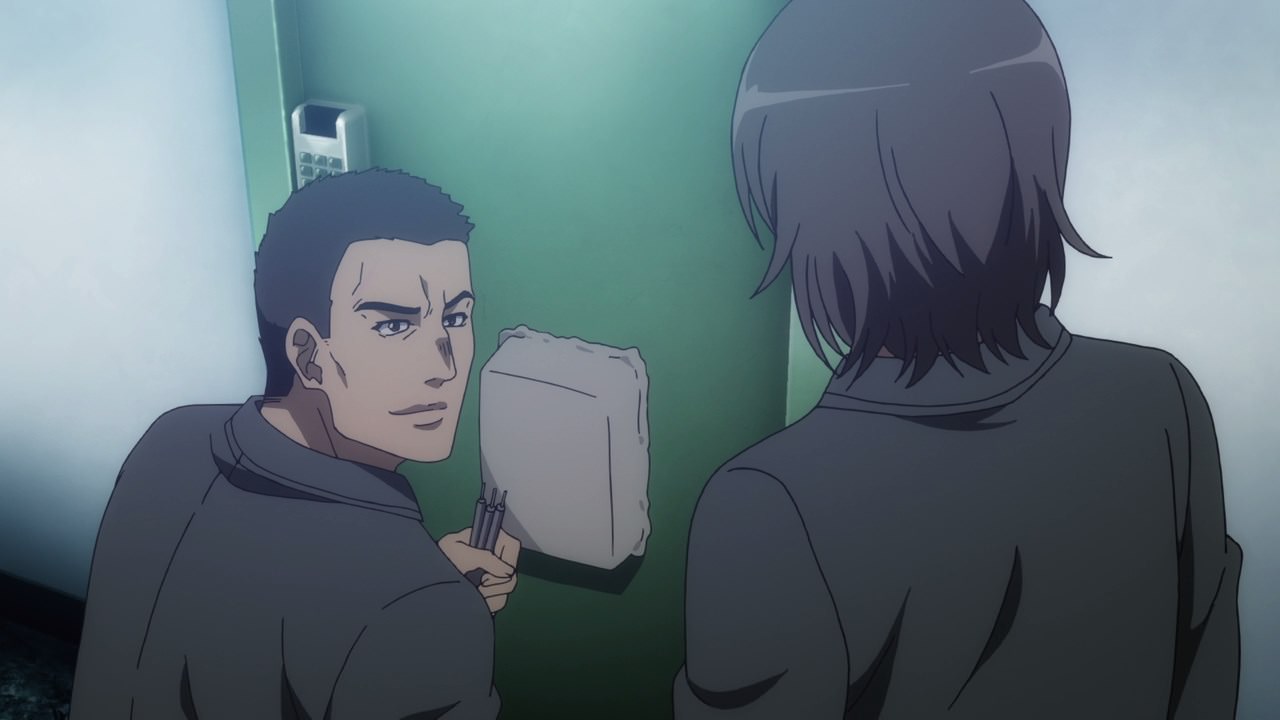 Anyways, it turns out that both Tatsuhiko Saku and Megumi Teshio are planning to capture Awaki Musujime’s buddies, and use them as bargaining chips as they want to use her Move Point ability to transfer them to Aleister Crowley’s fortified building and attack him.

Then again, they need to free the inmates first and that’s why Tatsuhiko place those plastic explosive on those doors and blow it up, but Megumi doubt that. 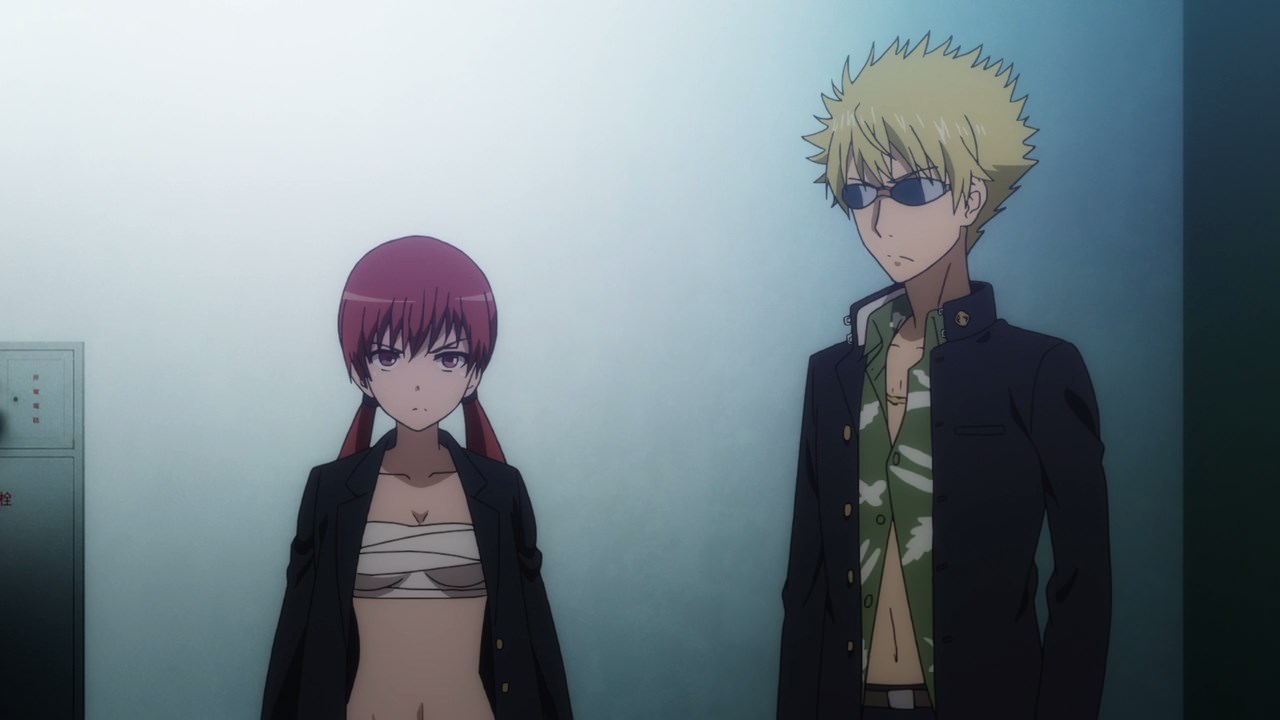 Speaking of the Move Point user, Awaki Musujime is here along with Motoharu Tsuchimikado as they’ll stop this mercenary group from achieving their goals. C’mon, who wants the Academy City turn into Anarchy City? 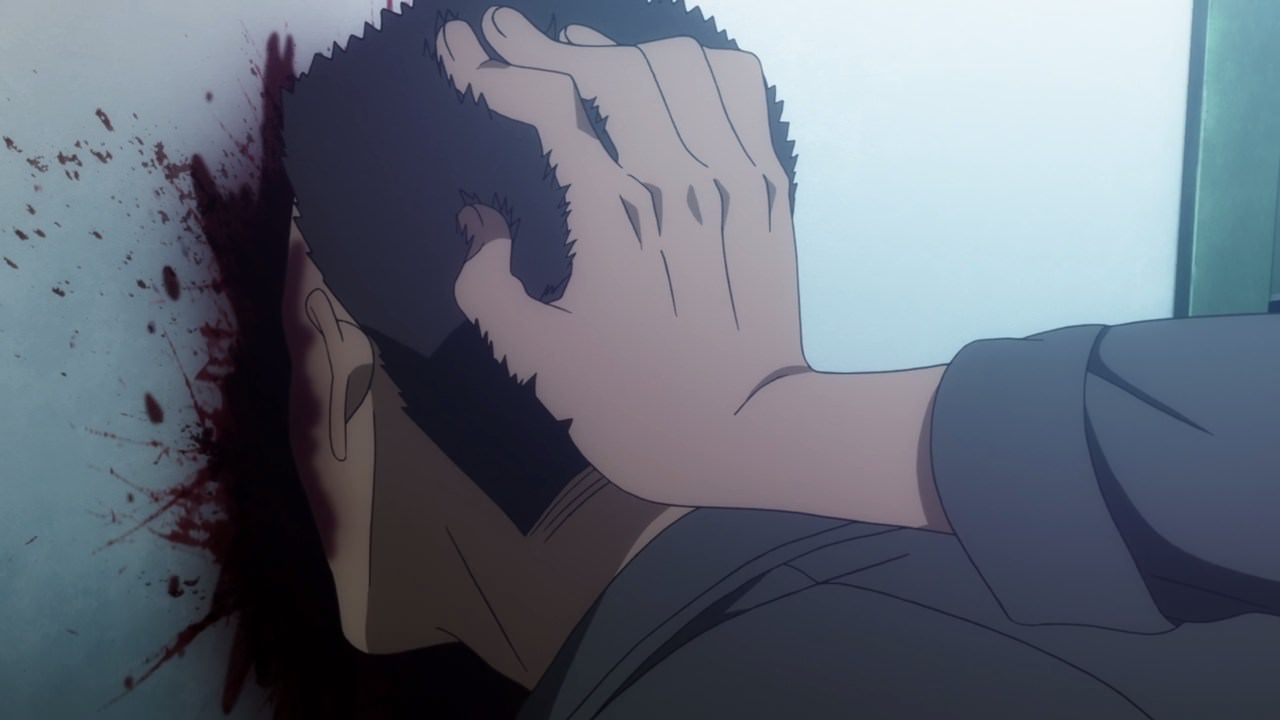 On the other hand, looks like Tatsuhiko Saku got his face slammed into the wall and man, that’s gotta hurt! 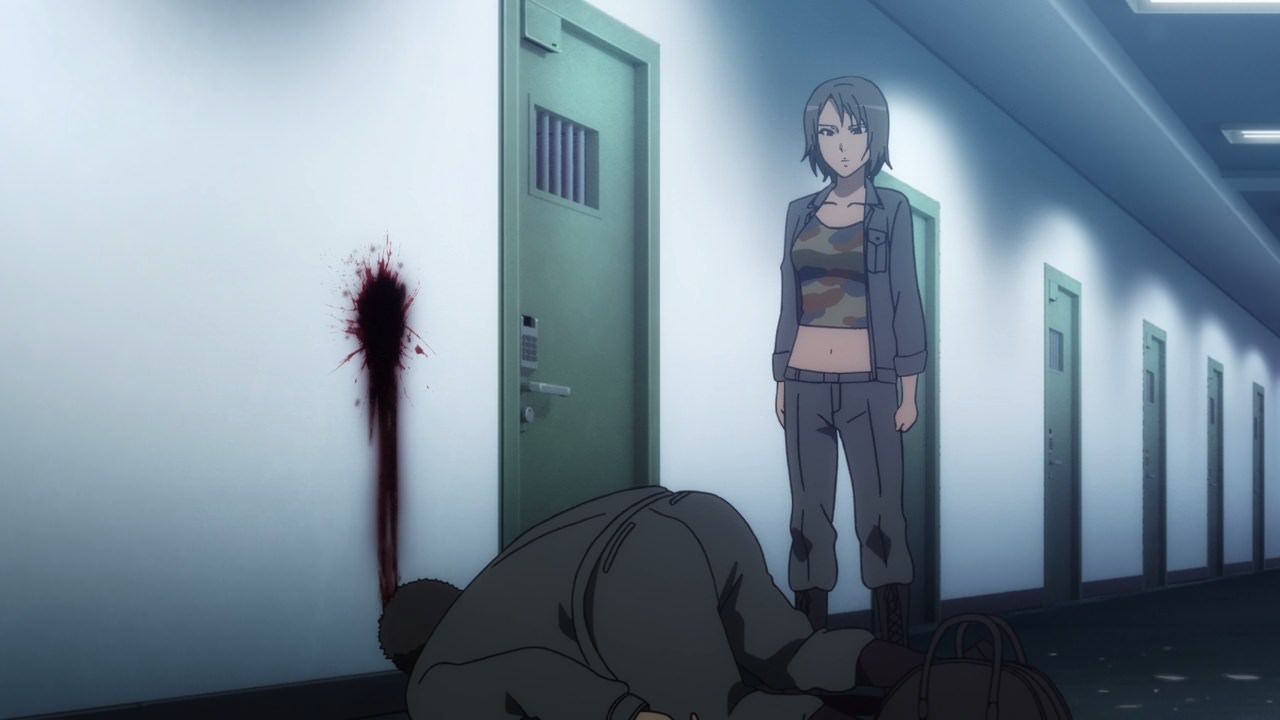 Anyways, now that Awaki Musujime is here in person, looks like Megumi Teshio won’t have to resort to take her friends as hostages as she’ll have to convince Musujime to use her esper powers against her will. 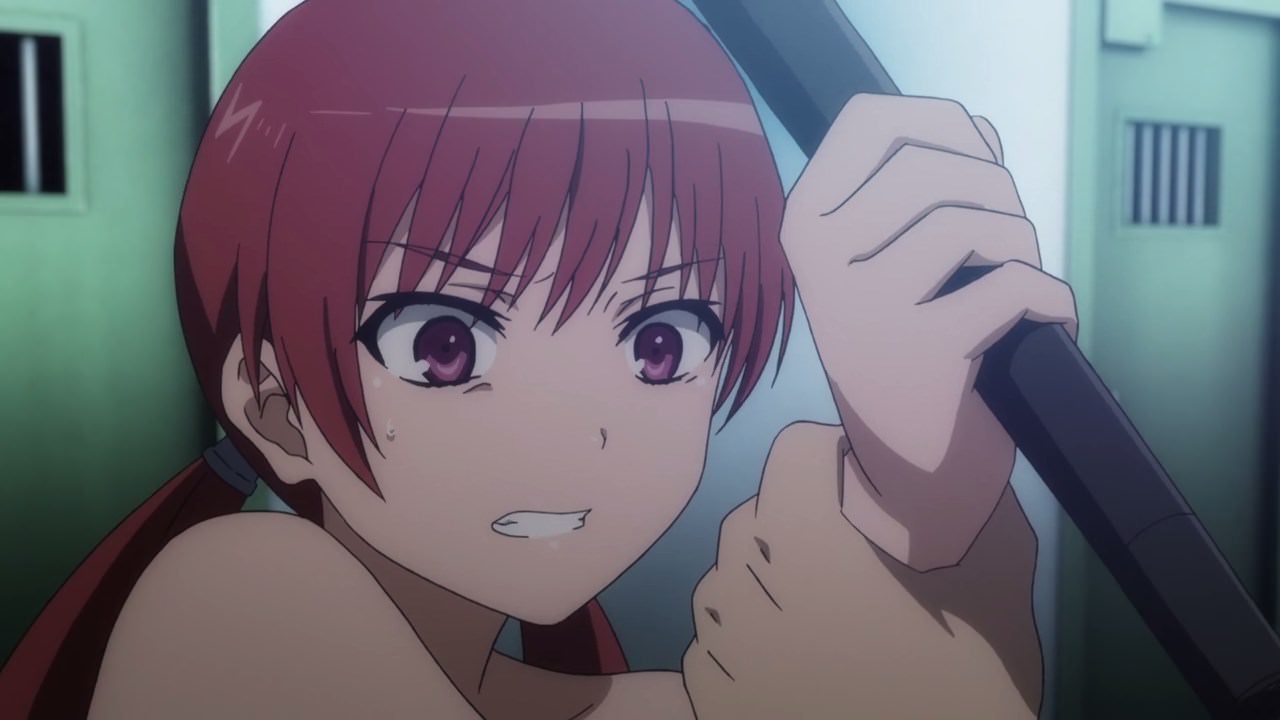 And the only way to do that is to break Awaki’s hands as Megumi is a capable fighter who doesn’t need psychic powers to overwhelm her opponents. 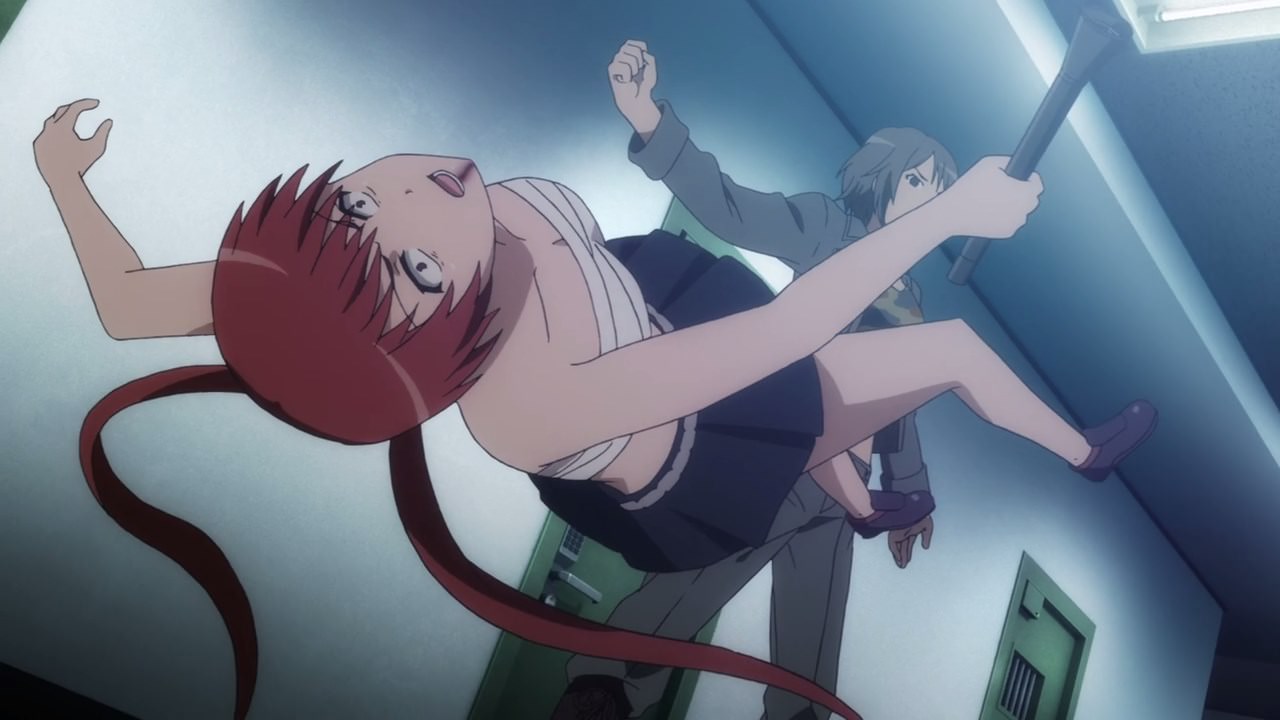 In any case, looks like Awaki Musujime is put into a corner thanks to Megumi Teshio.

And speaking of Megumi, she has her reasons to confront Aleister Crowley because Teshio doesn’t want to be a pawn to him and his mysterious scheme. 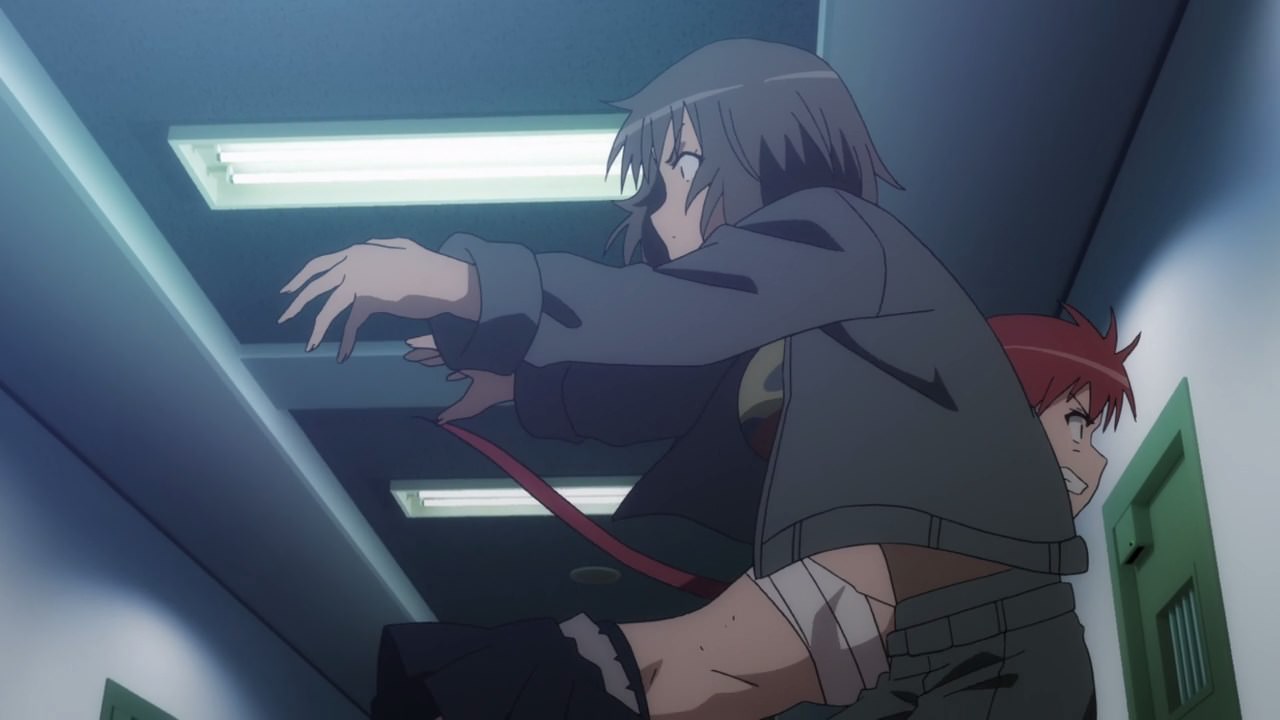 But despite her intentions, Awaki Musujime won’t give up against Megumi Teshio as she retaliate and deliver a sucker punch to Megumi’s gut. 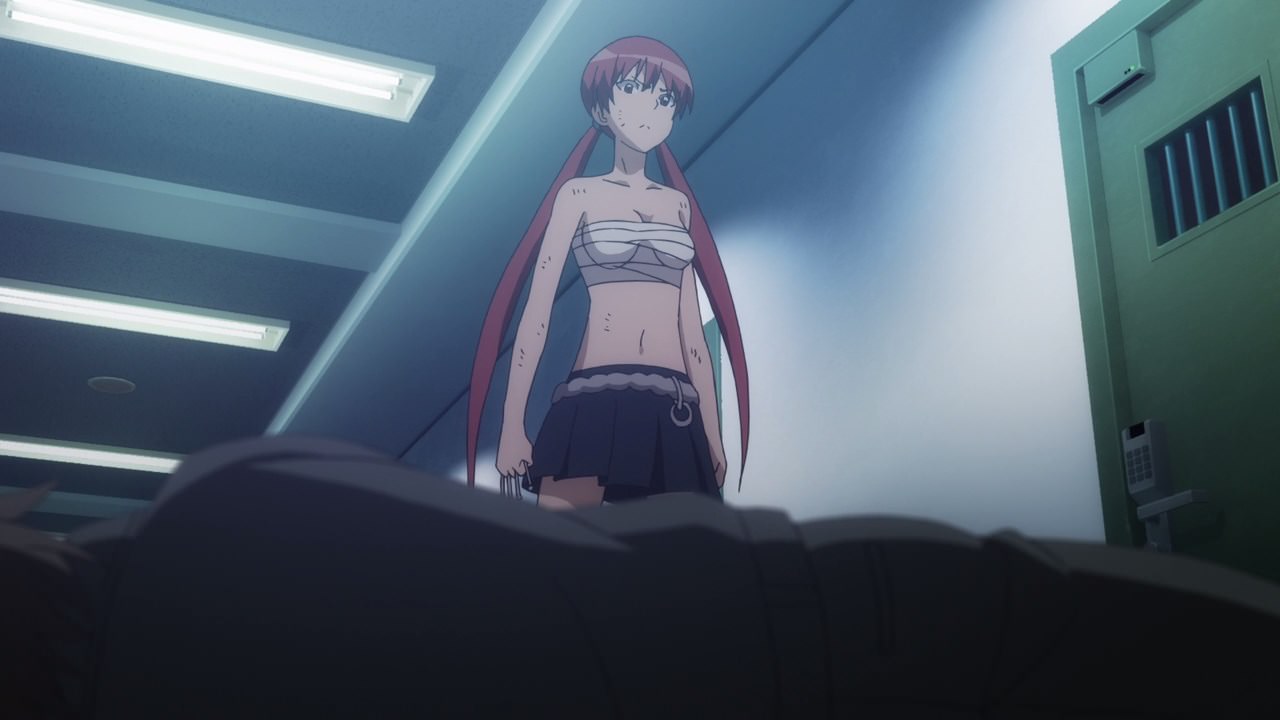 With that said, looks like BLOCK’s attempt to put Academy City into disarray has failed now that both Tatsuhiko Saku and Megumi Teshio are defeated. However, it’s not yet over… 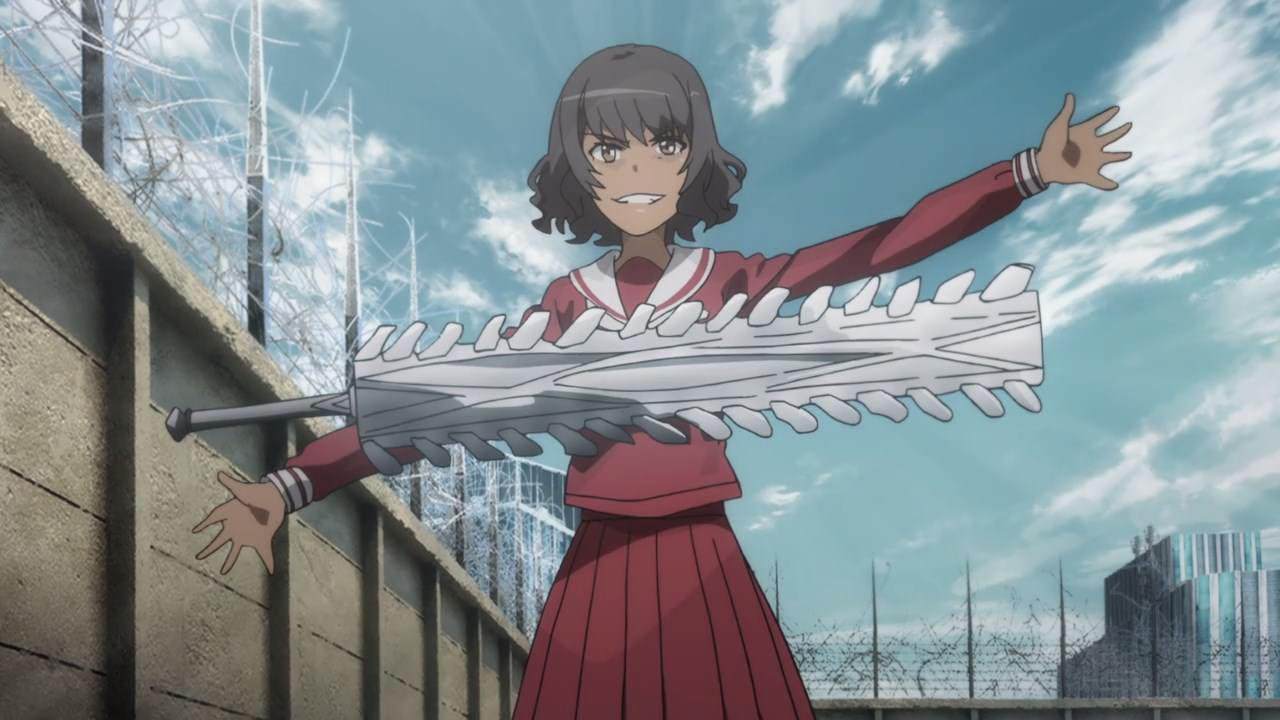 Because it turns out, there’s one more battle that’s happening outside the juvenile hall, with Etzali taking on Xochitl in which she branded him as a traitor. 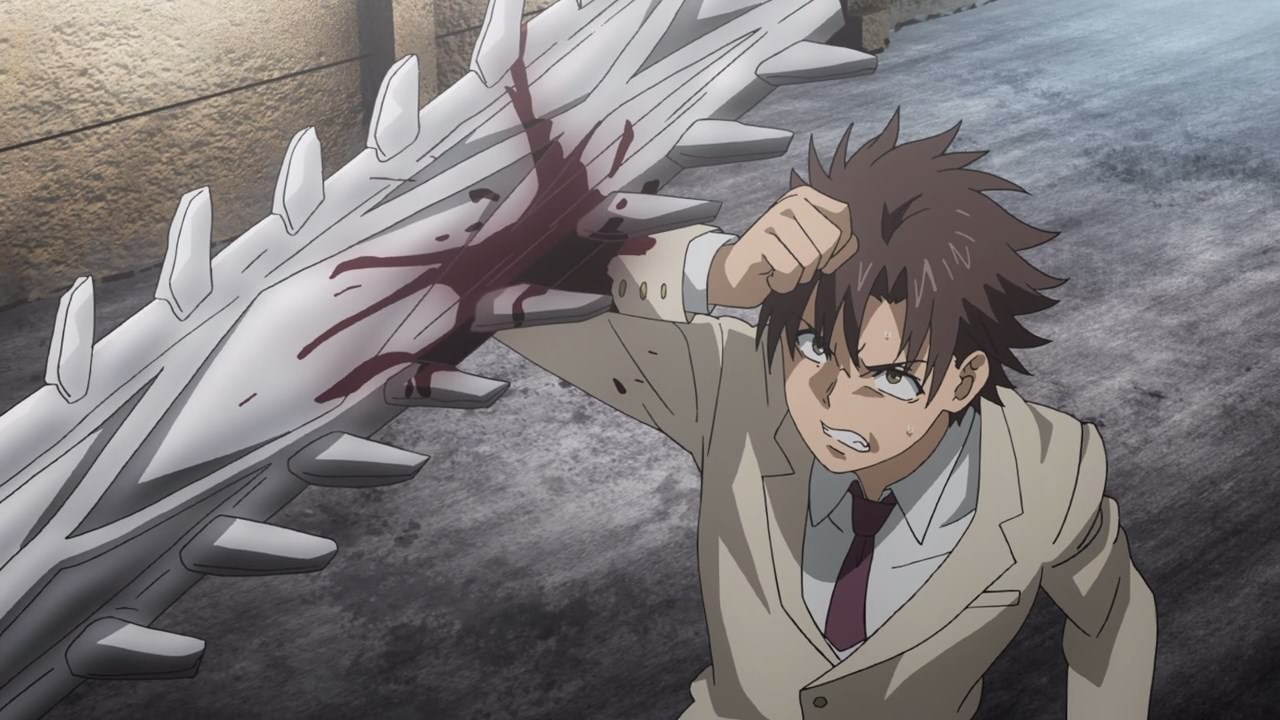 Oh yeah, Xochitl is wielding a saw-like sword called a Macuahuitl in which she whacked Etzali’s arm, but not cutting it as her weapon couldn’t slice bones effectively. 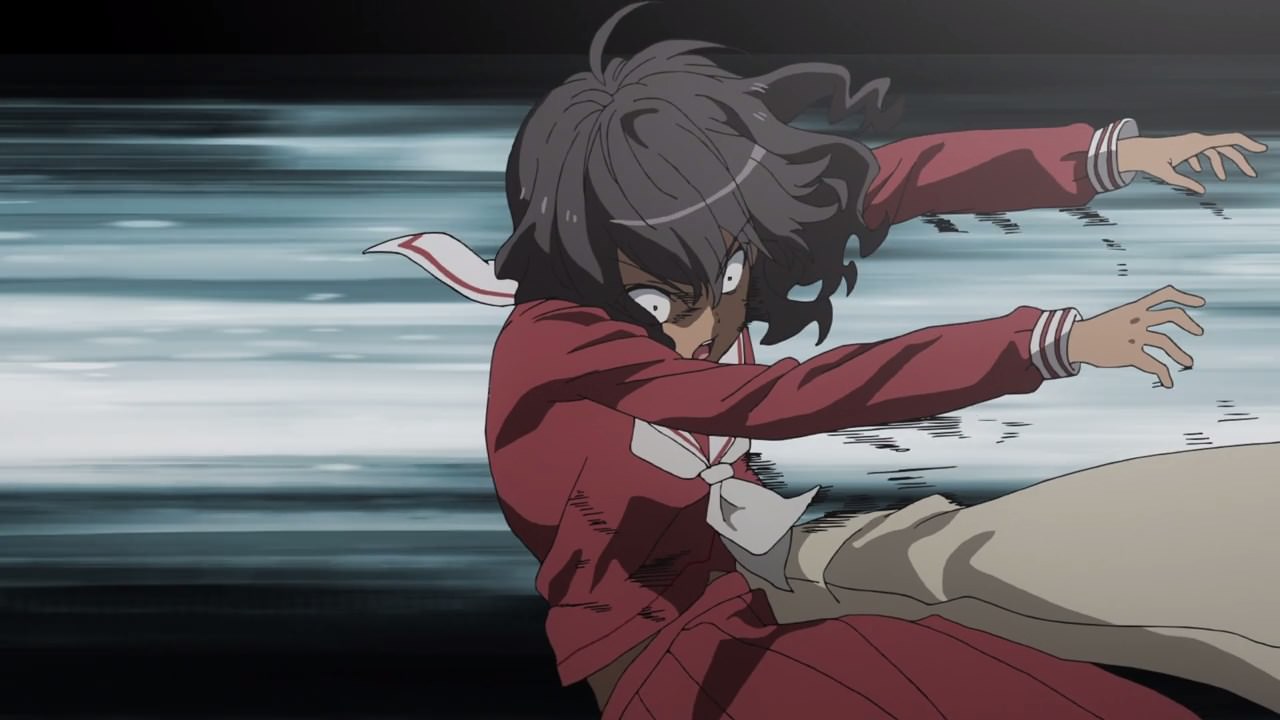 But that gives him a chance to kick Xochitl down. He may have broken bones, but Etzali emerged as the winner. However, he’s not gonna kill Xochitl because it’s not his principle. 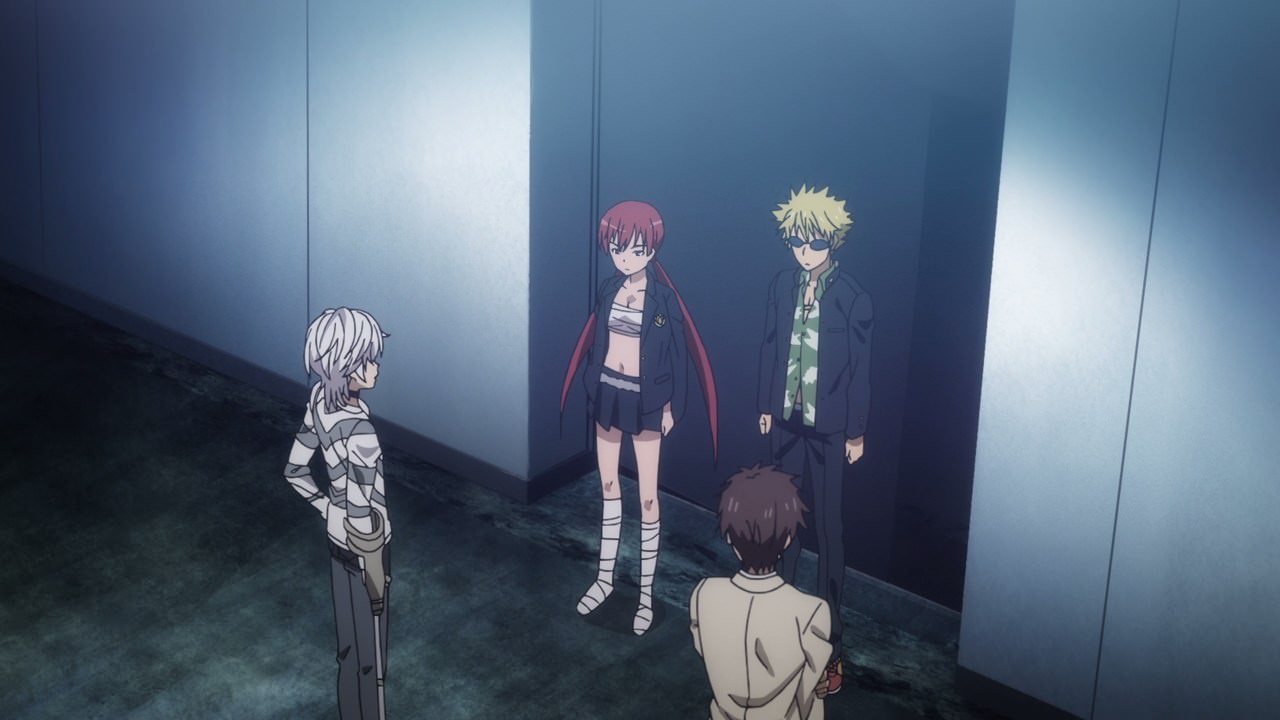 Well then, GROUP is done cleaning up everyone’s mess that their rivals made in Academy City.

Everything is safe now but then again, I wonder what happened to ITEM especially towards Frenda Seivelun and Saiai Kinuhata? 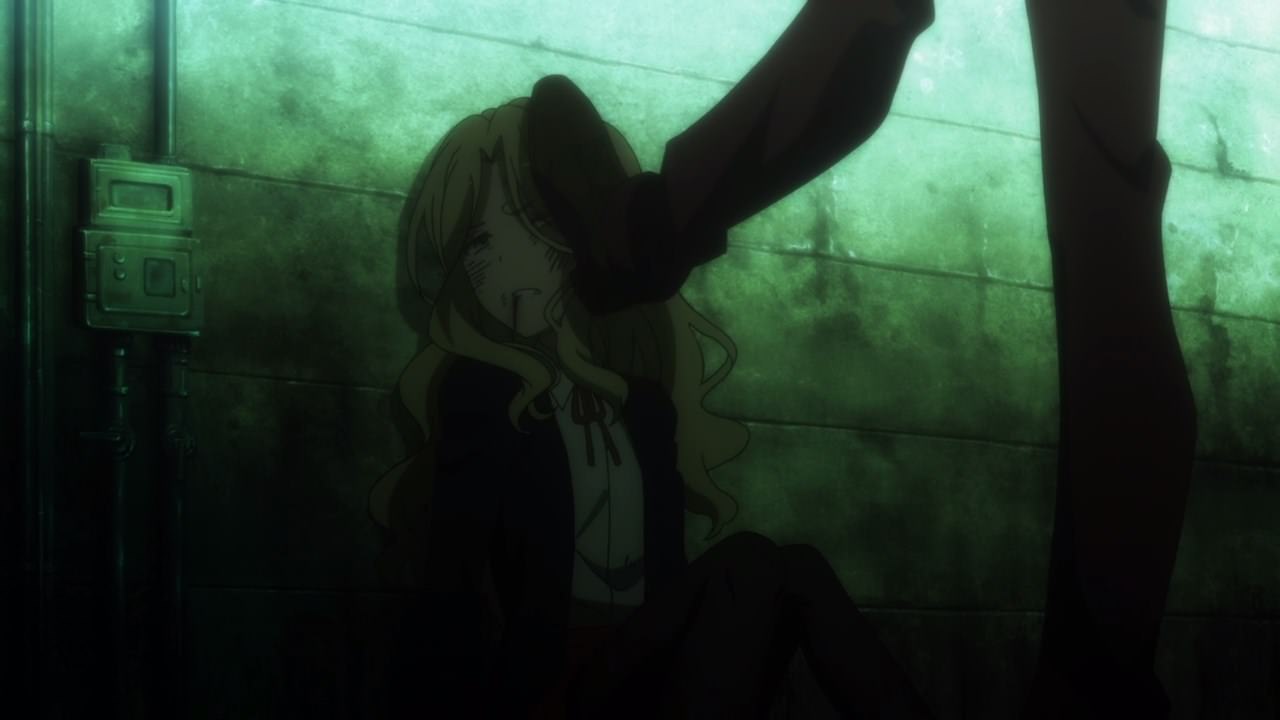 Well, there’s Frenda Seivelun but it seems that she’s being beaten up by someone else… 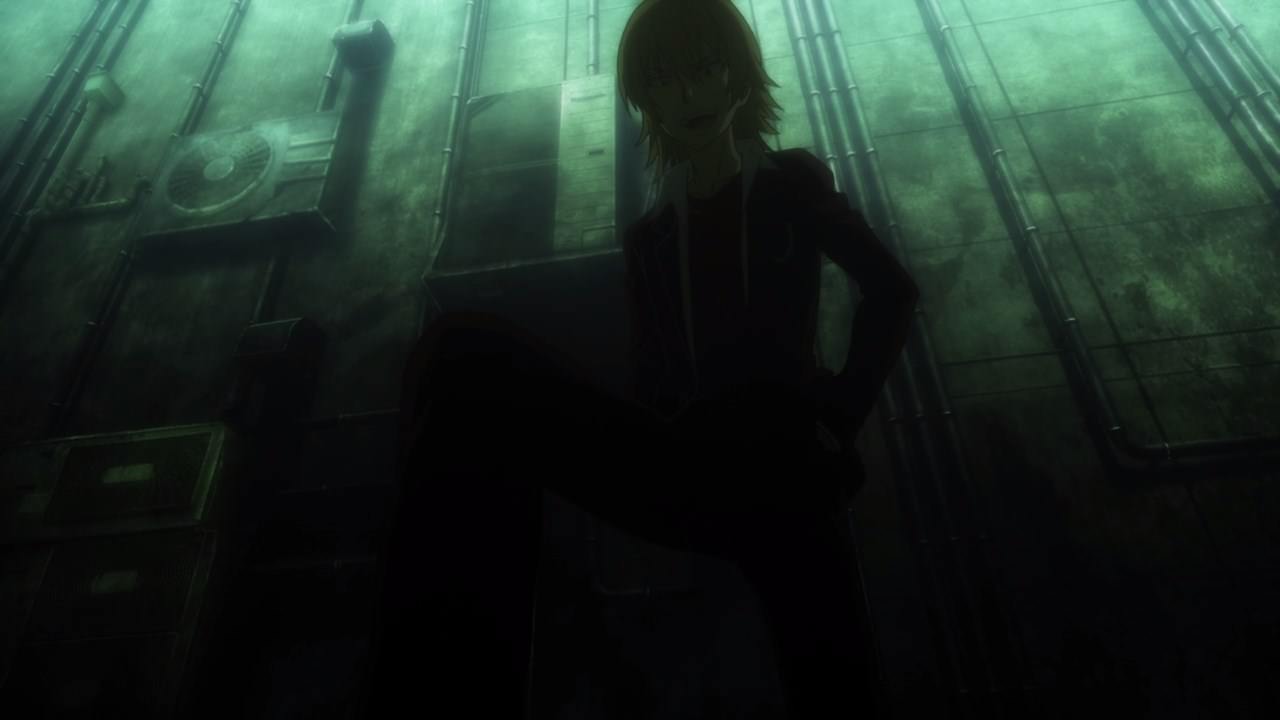 Someone like Teitoku Kakine as he toyed Frenda like a ragdoll until she told him about the location of her comrades. What an asshole! Then again, where’s Saiai Kinuhata?

Anyways, tune in next time and let’s hope that someone would save Frenda and Saiai.