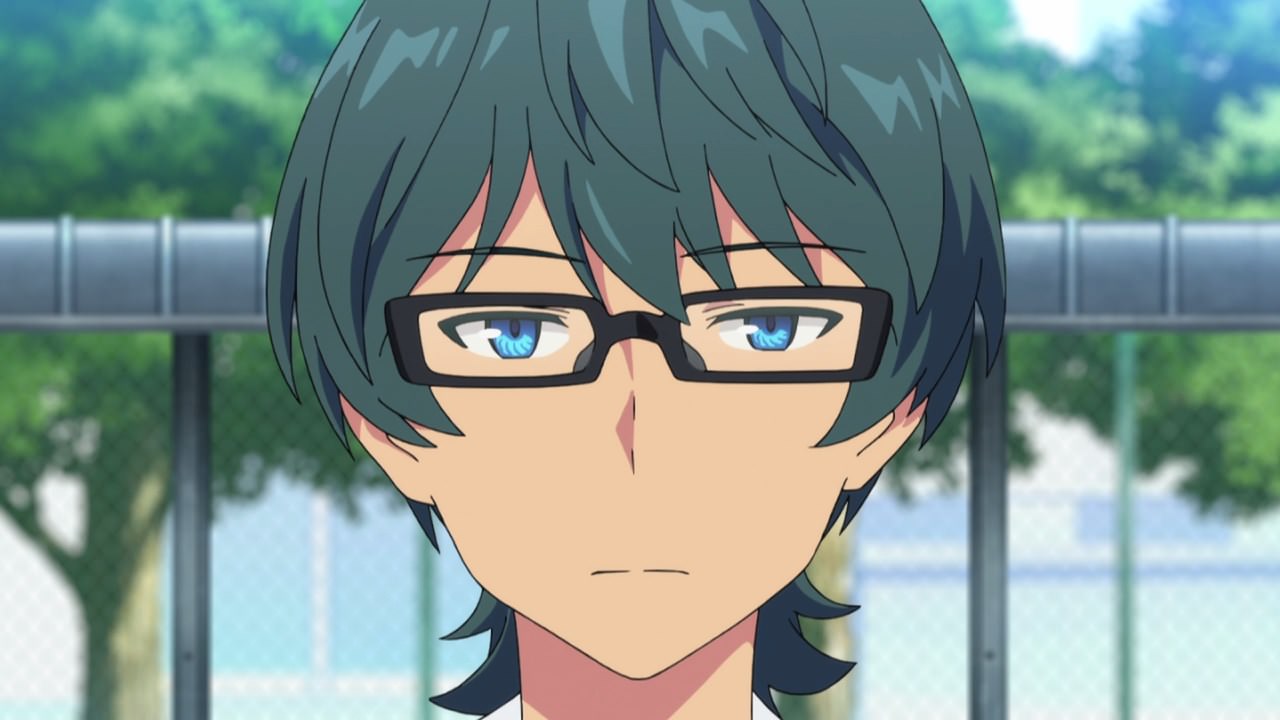 Well, this is what Shou Utsumi’s face looks like after hearing Yuuta Hibiki’s story about Akane Shinjou being the goddess of Tsutsujidai and the perpetrator behind the kaiju attacks.

And as you can see, Shou doesn’t believe in Yuuta’s words because in his mind, Akane did nothing wrong. 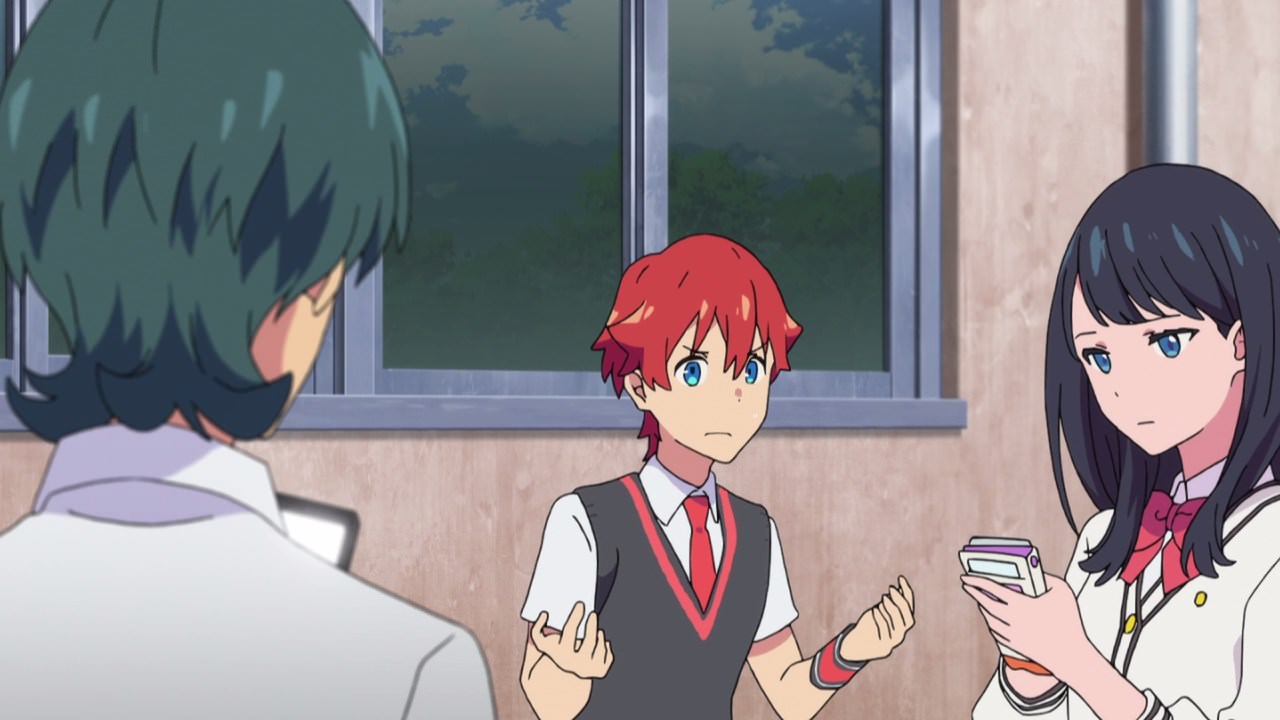 Even Rikka Takarada was not convinced that Akane Shinjou will do such a thing like erasing people that she doesn’t like.

In any case, seems that Shou and Rikka are thinking that Yuuta is crying wolf to then, despite the fact that he’s telling the truth and let’s not forget that Max is there as his witness. 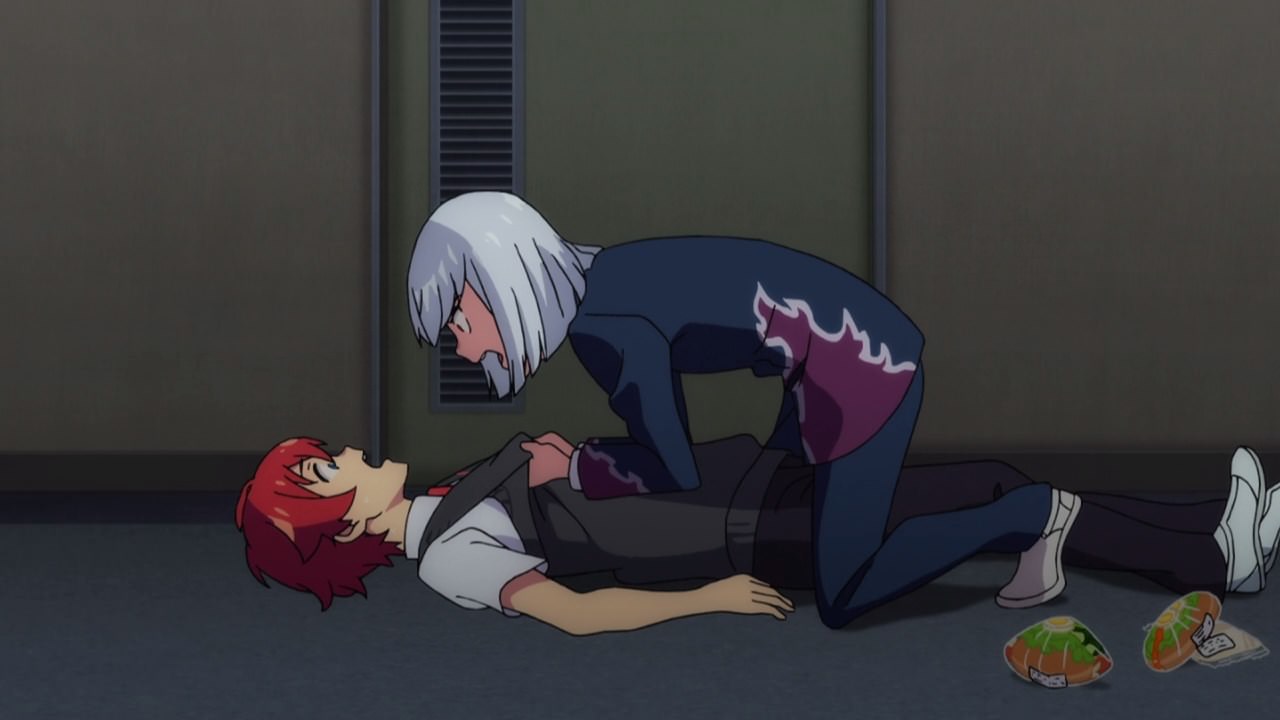 On the other hand, here’s Anti as he pounced at Yuuta and told him to summon Gridman. Of course, Yuuta told Anti that it only be possible if there’s a kaiju roaming around the town.

But you know what, it would be better if Anti transforms into his kaiju form. That’ll be the the time for Gridman to show up. 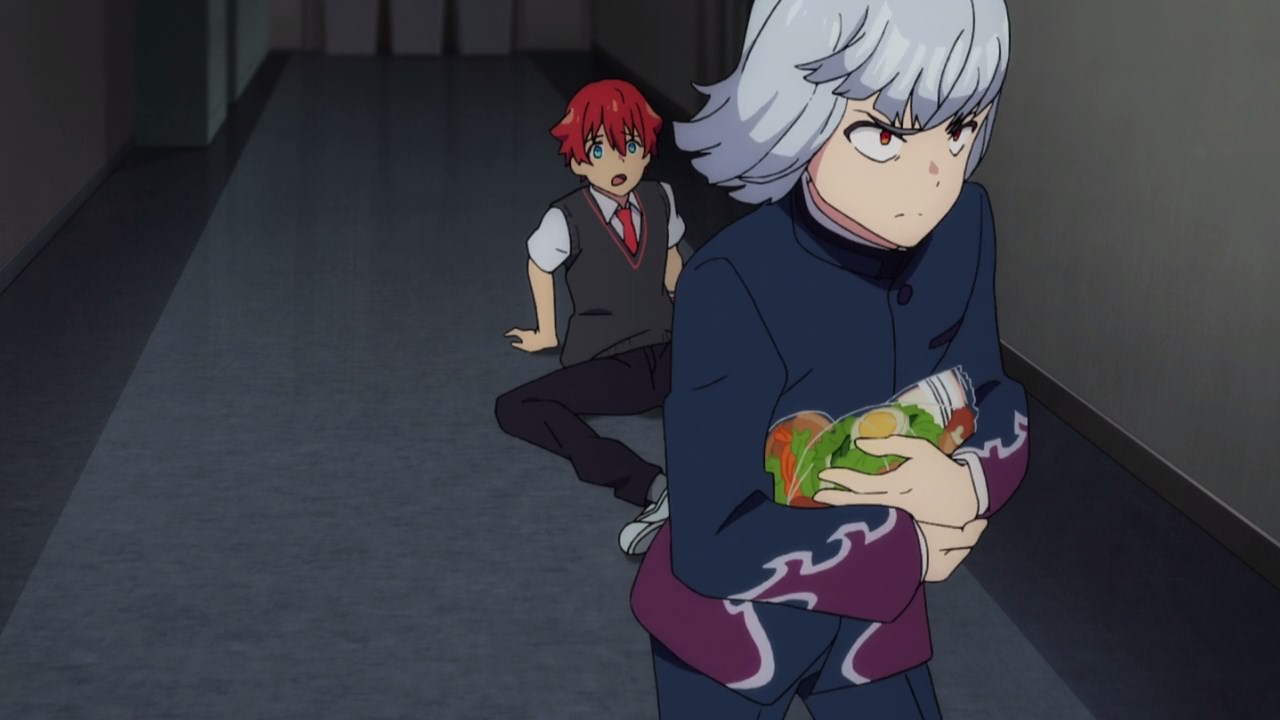 However, Anti decided to run away for now and took Yuuta’s lunch. That’s… horrible!

Well to be fair, Anti is hungry and the reason why he doesn’t have food to eat is because Akane treats him like dirt. 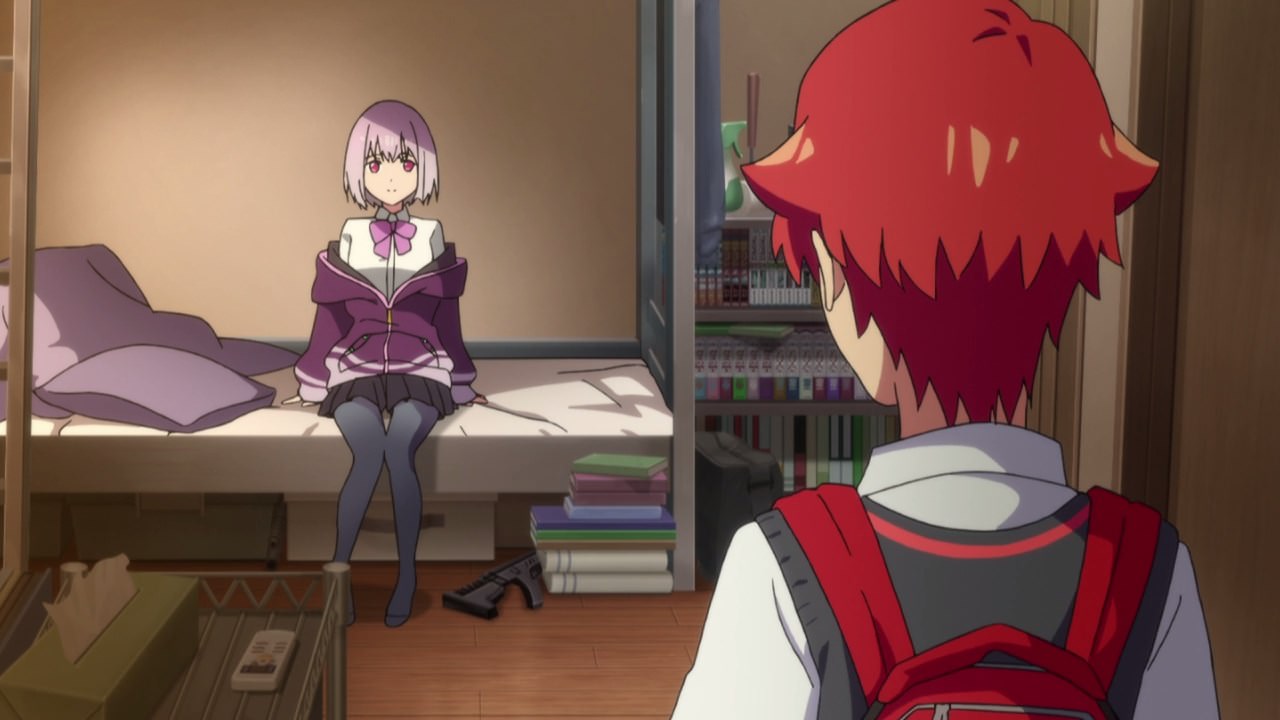 And speaking of Akane Shinjou, she’s inside Yuuta’s apartment where Akane wants him to join forces and rule Tsutsujidai forever. After all, she know that Yuuta is Gridman.

But of course, Yuuta Hibiki won’t do that because as long as there’s kaiju around, he’ll protect everyone as the host of the hyper agent. Sorry Akane, but you won’t convince a good guy like Yuuta! 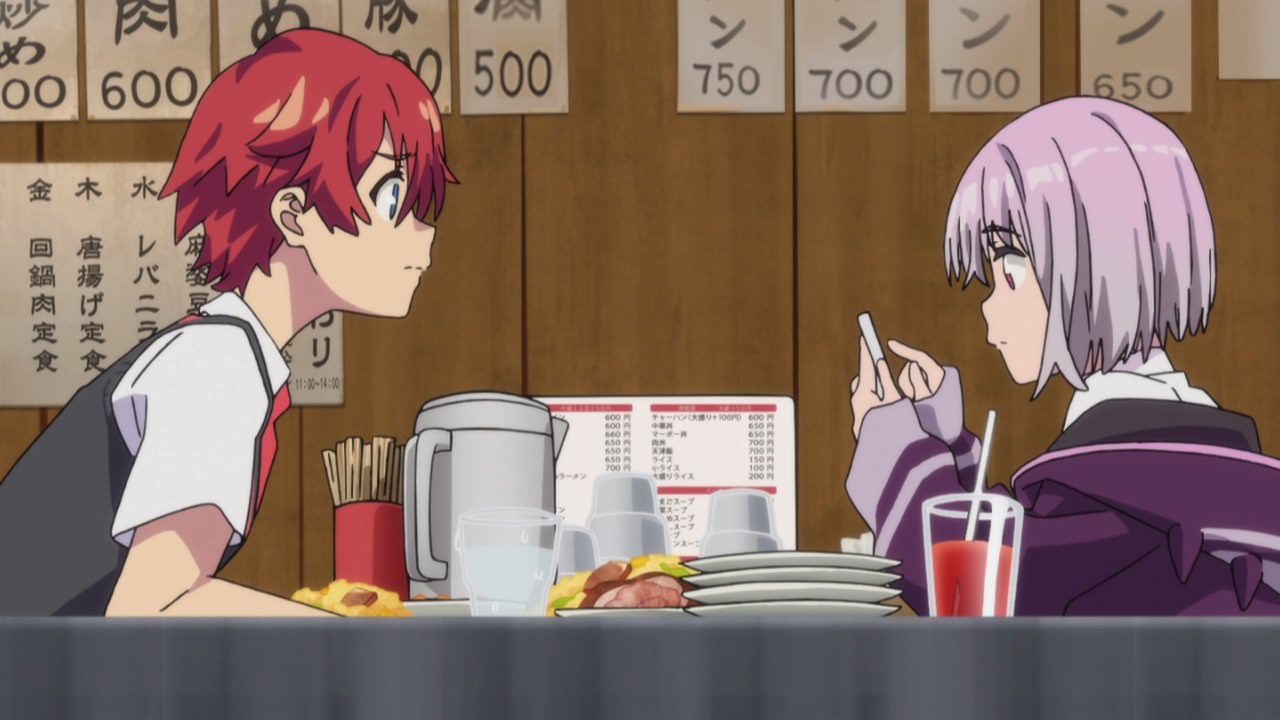 Still, Akane won’t give up on recruiting Yuuta to the dark side as she invites him for dinner. Oh, and she invited a surprise guest too. 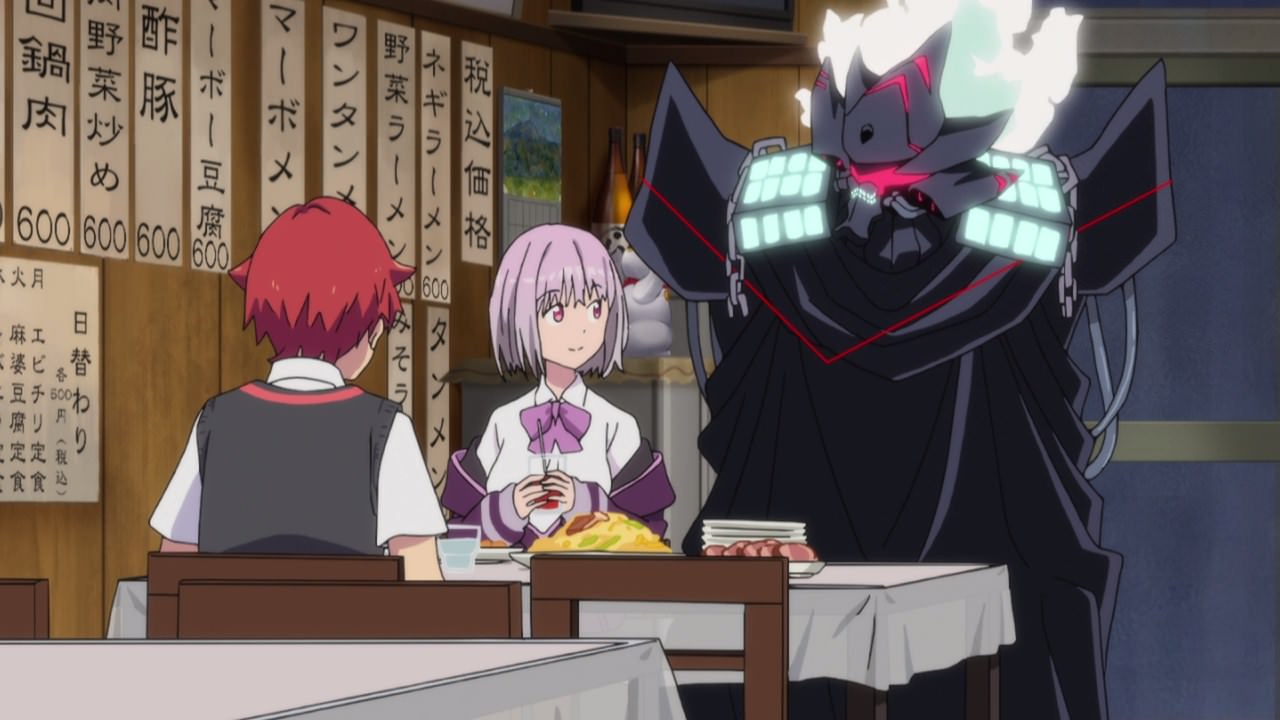 Said guest happened to be Alexis Kerib as he finally appeared in the real world (or should I say Akane’s world).

Damn, this is the worst dine-in experience ever now that Yuuta will have to deal with the main villain of this show! 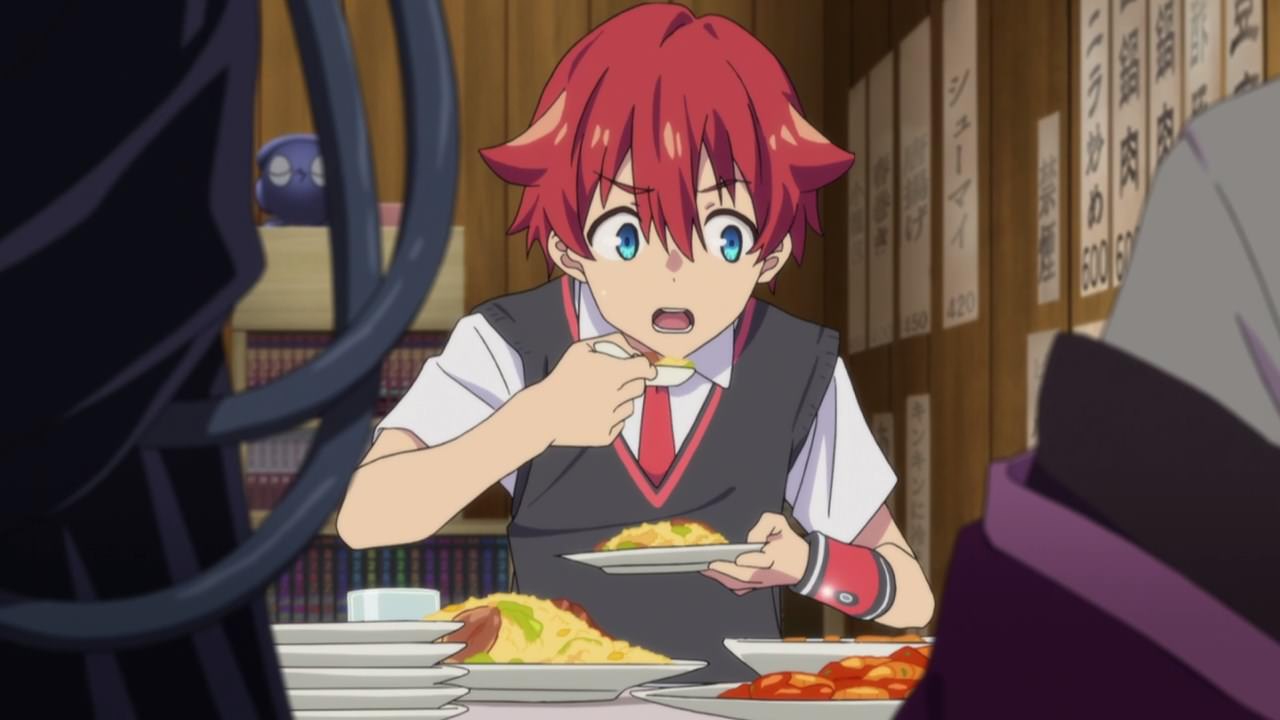 As for Yuuta Hibiki however, seems that he’ll have to cut his dinner short as there’s a kaiju on the loose.

But wait a minute, Alexis Kerib is there and he’s responsible for turning Akane Shinjou’s creations into giant monsters. Basically, there’s no way a kaiju would appear as Alexis Kerib is at the restaurant.

Then again, if Alexis Kerib is there, who’s summoning a kaiju at this hour? 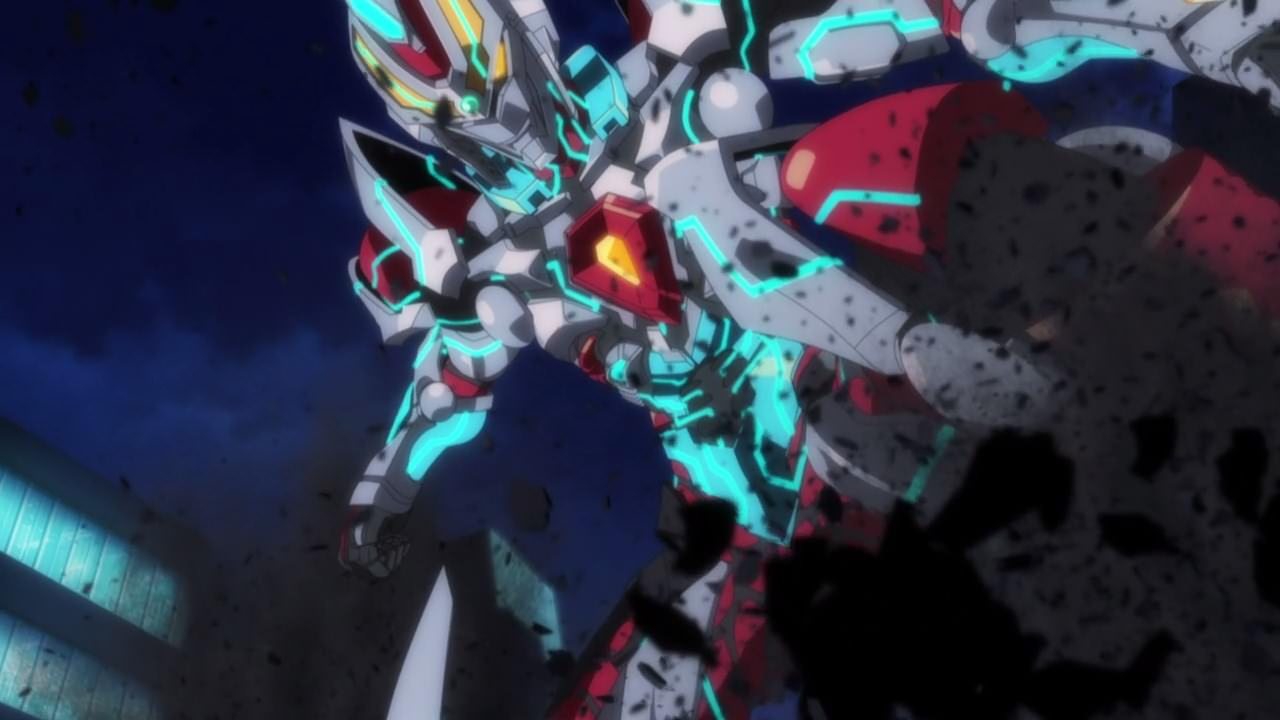 With that said, time for Yuuta Hibiki to transform into Gridman and defeat… 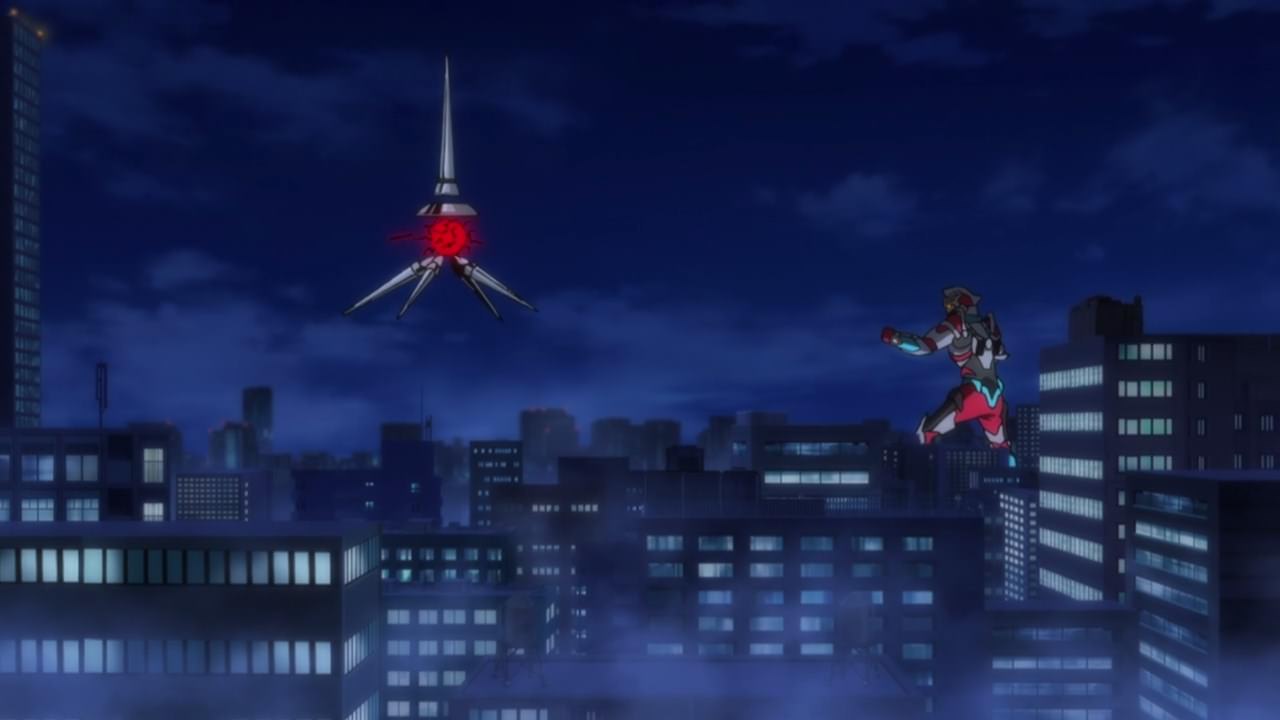 …this UFO thing? Wait, is this the monster of the week? It looks so small compared to Akane’s creations. 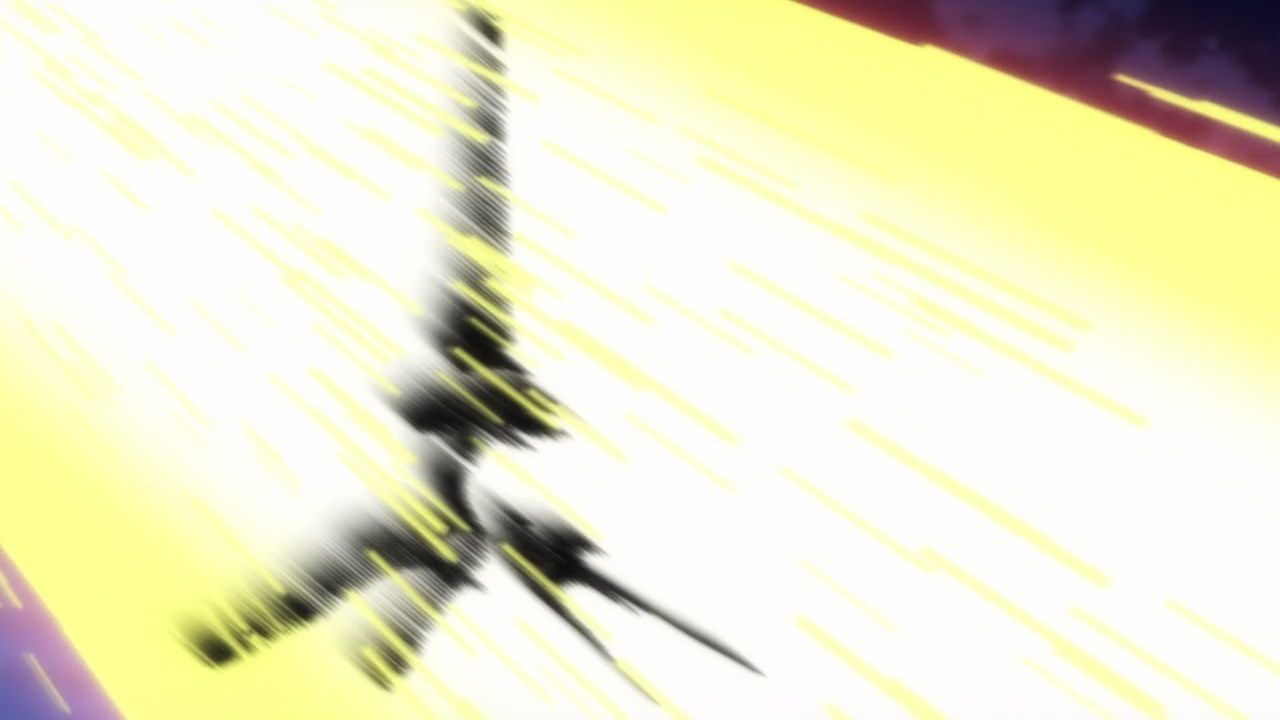 Oh well, time to destroy this thing with Grid Beam and head home. Man, this is an easy fight! 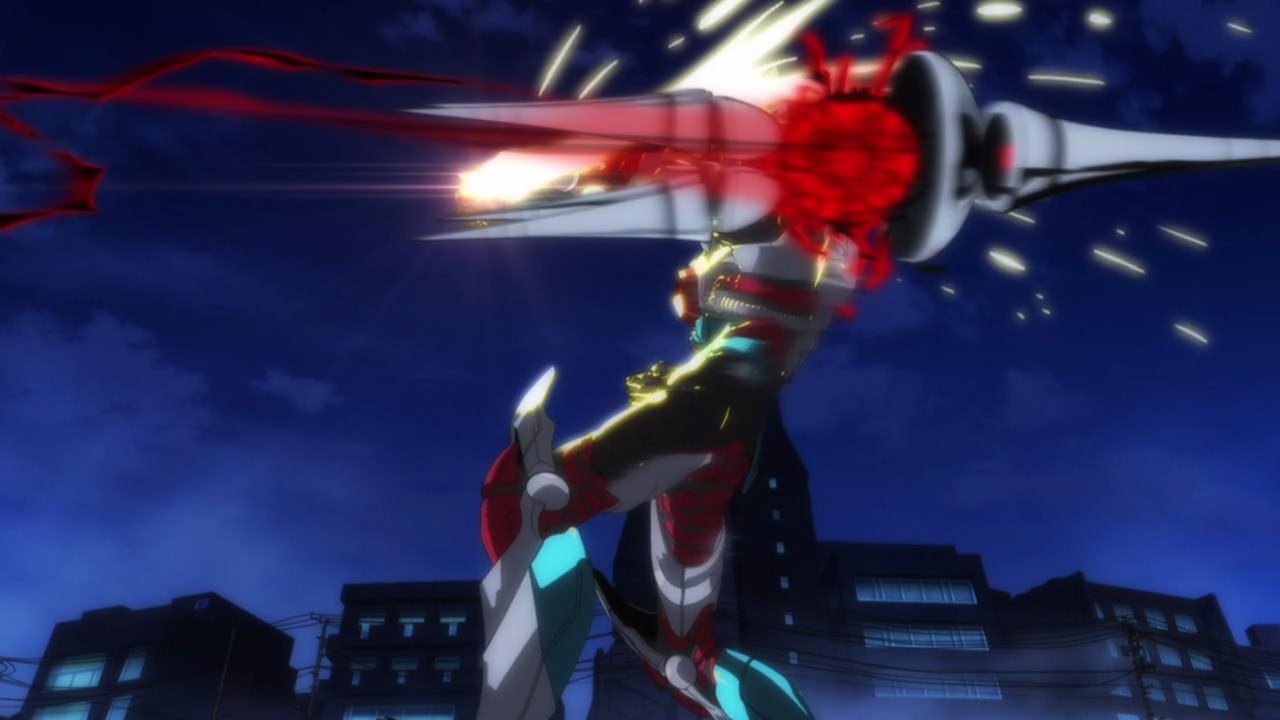 Except that it doesn’t as this UFO thing regenerates itself and attacks Gridman using its speed as an advantage. Well, this is very annoying. 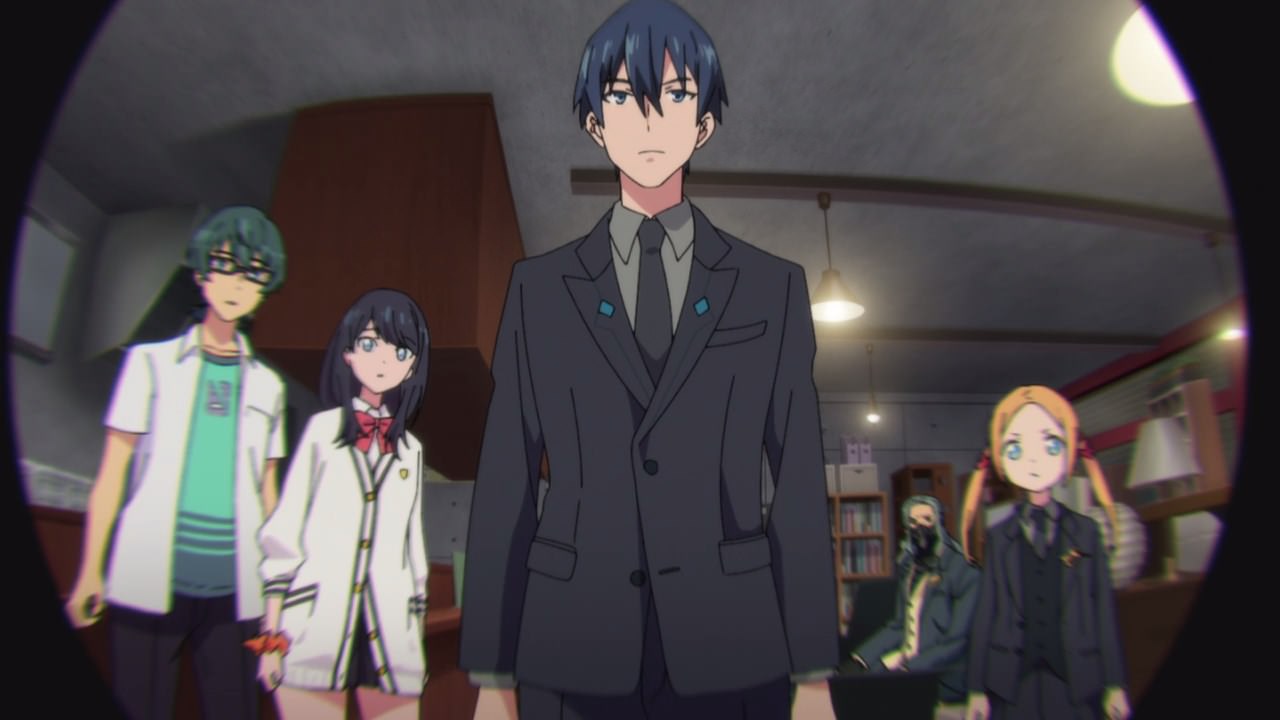 With that said, looks like Gridman will need some help as Vit steps up to aide the hyper agent… 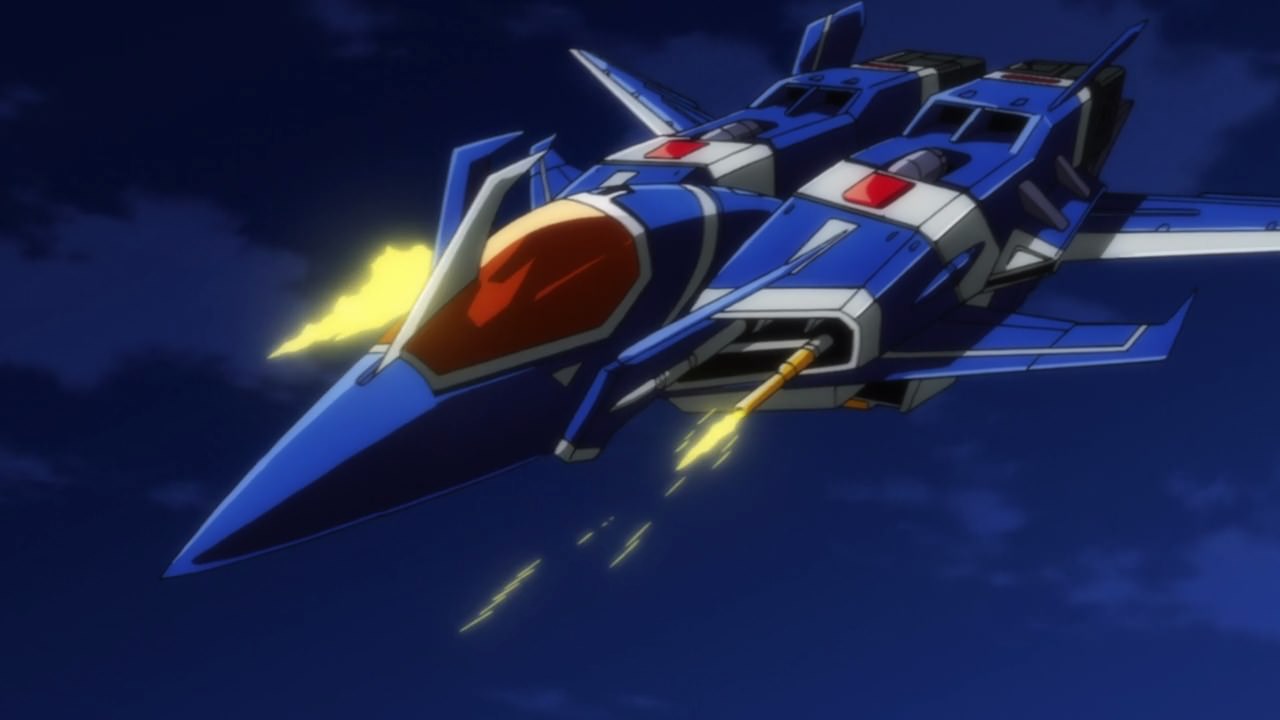 …and transforms into Sky Vitter, the last Assist Weapon to appear and he’s helping Gridman on defeating the enemy. 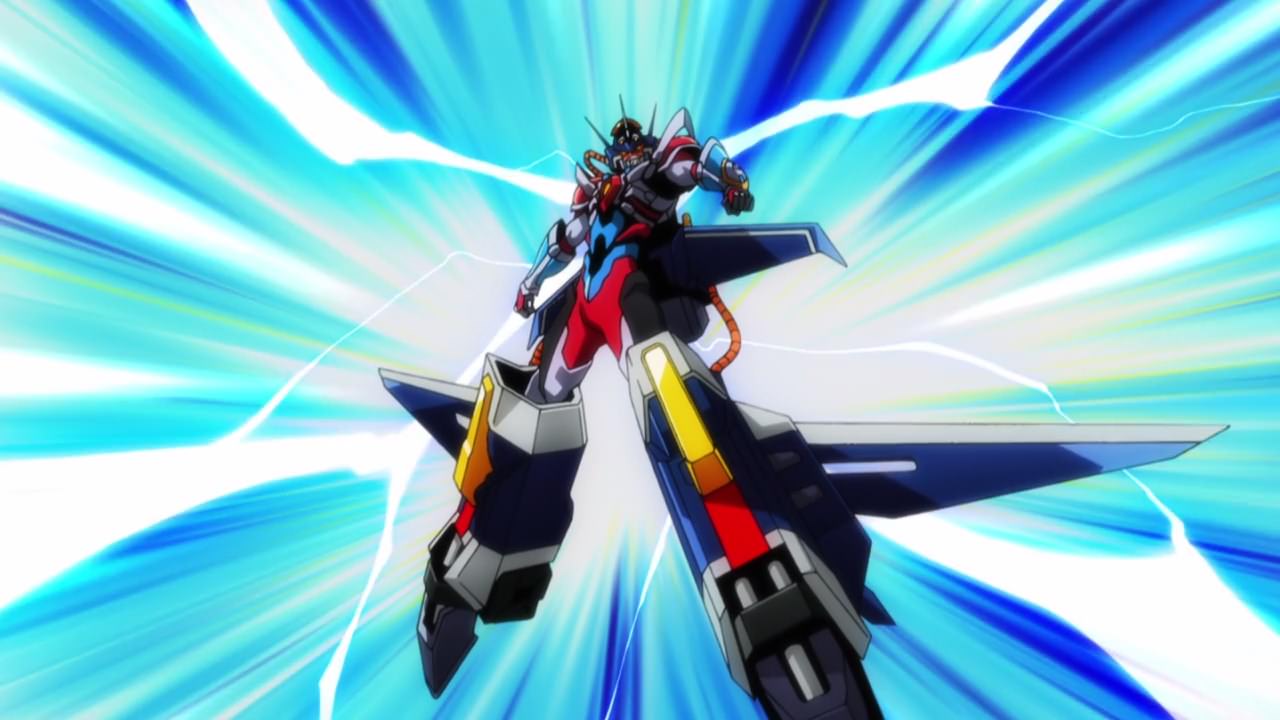 Oh, and let’s not forget that Sky Vitter can merge with the hyper agent to become Sky Gridman which is capable of flight. 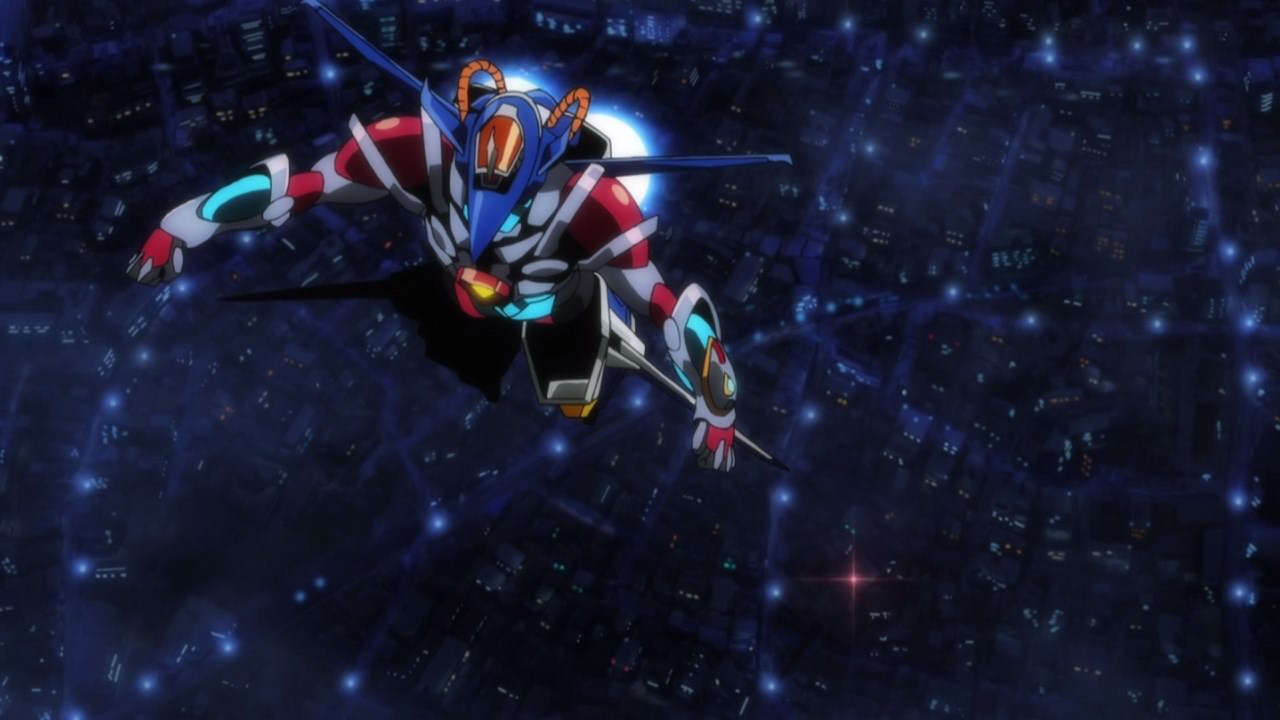 And speaking of flight, the hyper agent can outrun against this UFO-like drone with ease. 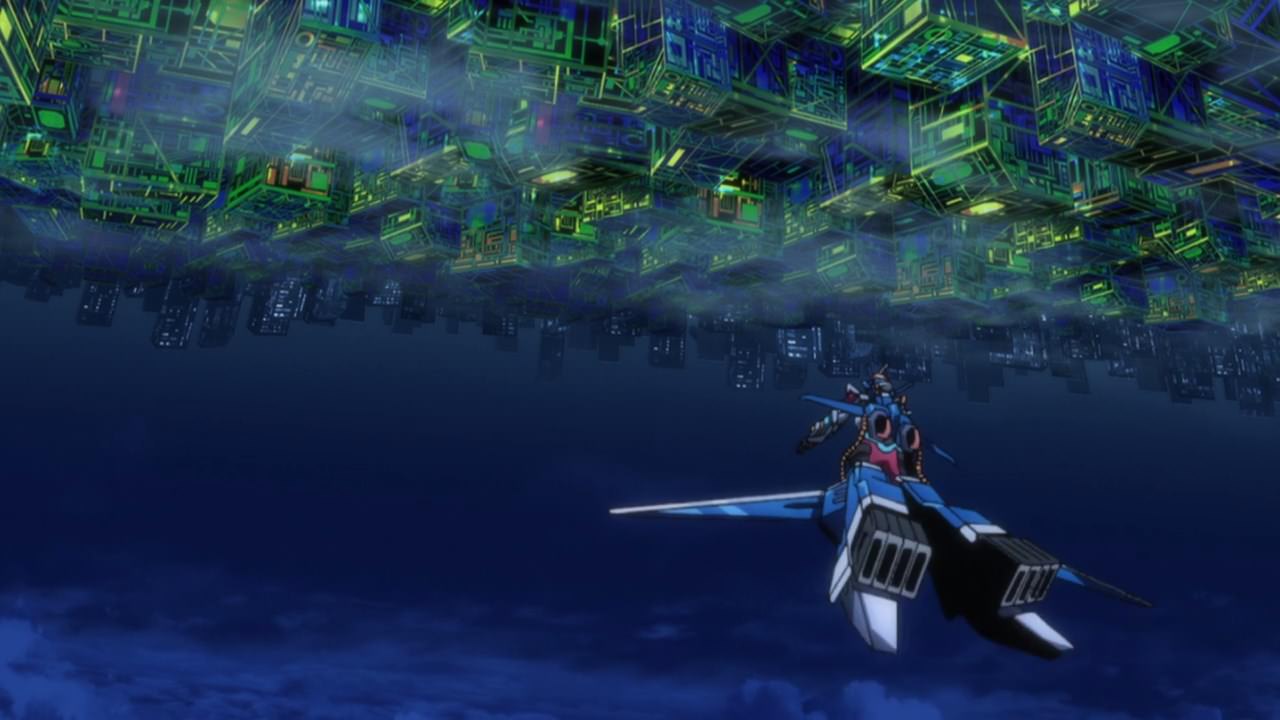 Then again, seems that Gridman went too far against his enemy. But more importantly, there’s a city above the sky. What’s going on here?

Anyways, this is the Computer World from the original tokusatsu show Denkou Choujin Gridman and come to think of it, I strongly believe that Akane’s world is a freaking virtual space where everything are made with ones and zeroes. 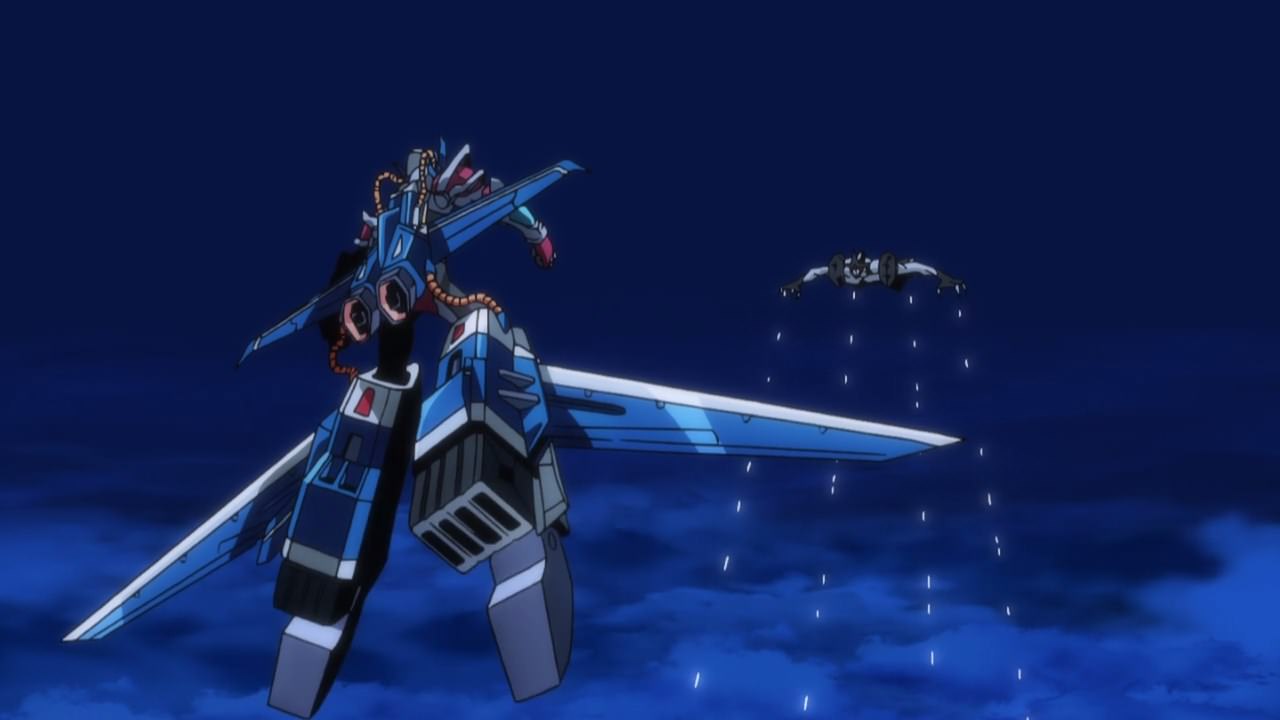 Now then, it’s time to finish the enemy of the week as it turns out that this UFO-like drone is being controlled by this flying kaiju. 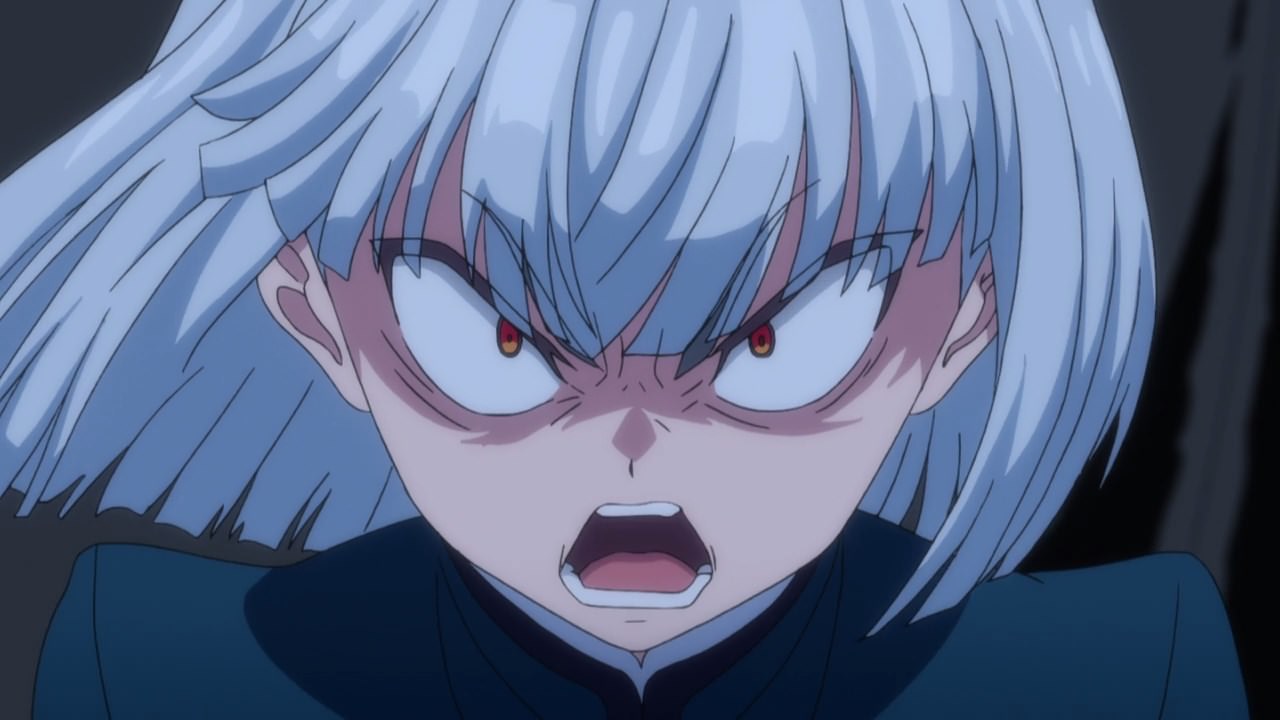 Also, it turns out that this kaiju was created by Anti, which I was surprised that a kaiju like him can create another kaiju without Akane’s help.

And the reason why he did such a thing? Because Anti wants the hyper agent to come out so that he can kill Gridman. Gotta say that his single-mindedness to kill Gridman by any means is fascinating, yet annoying at the same time. 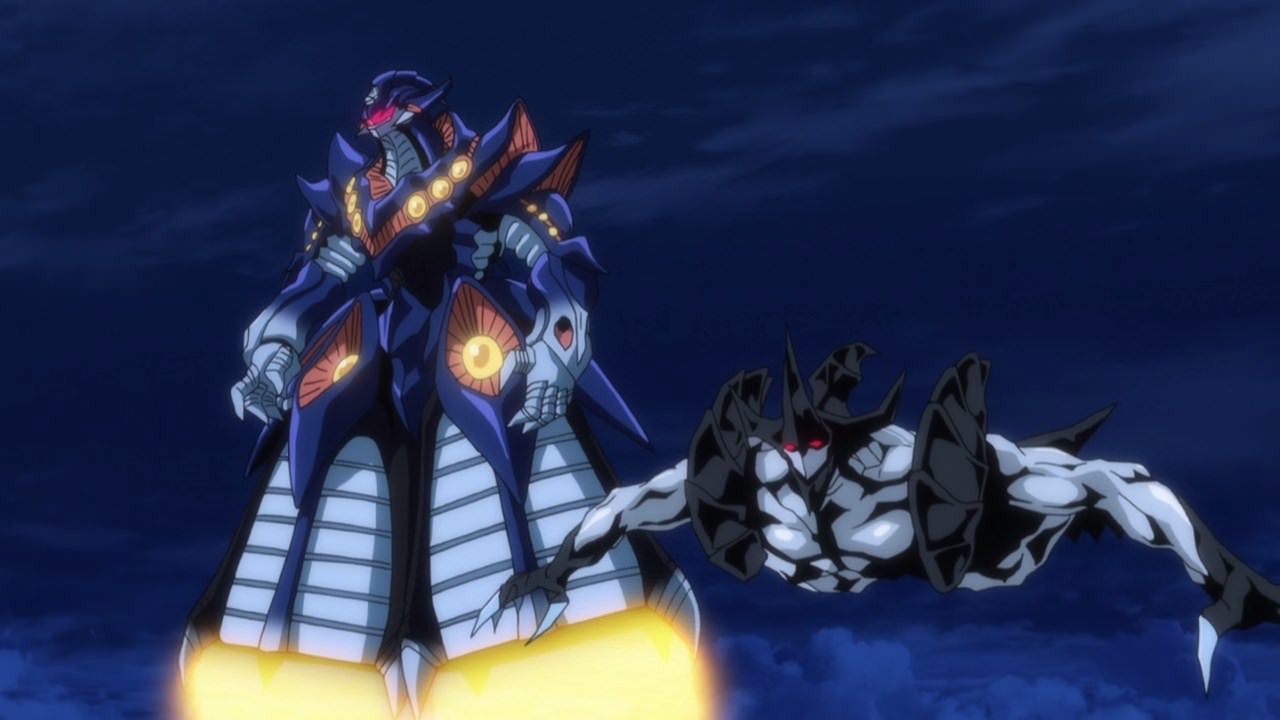 And one last thing, Anti copied Sky Gridman’s abilities. Not surprising since he was created for the sole purpose of murdering Gridman. 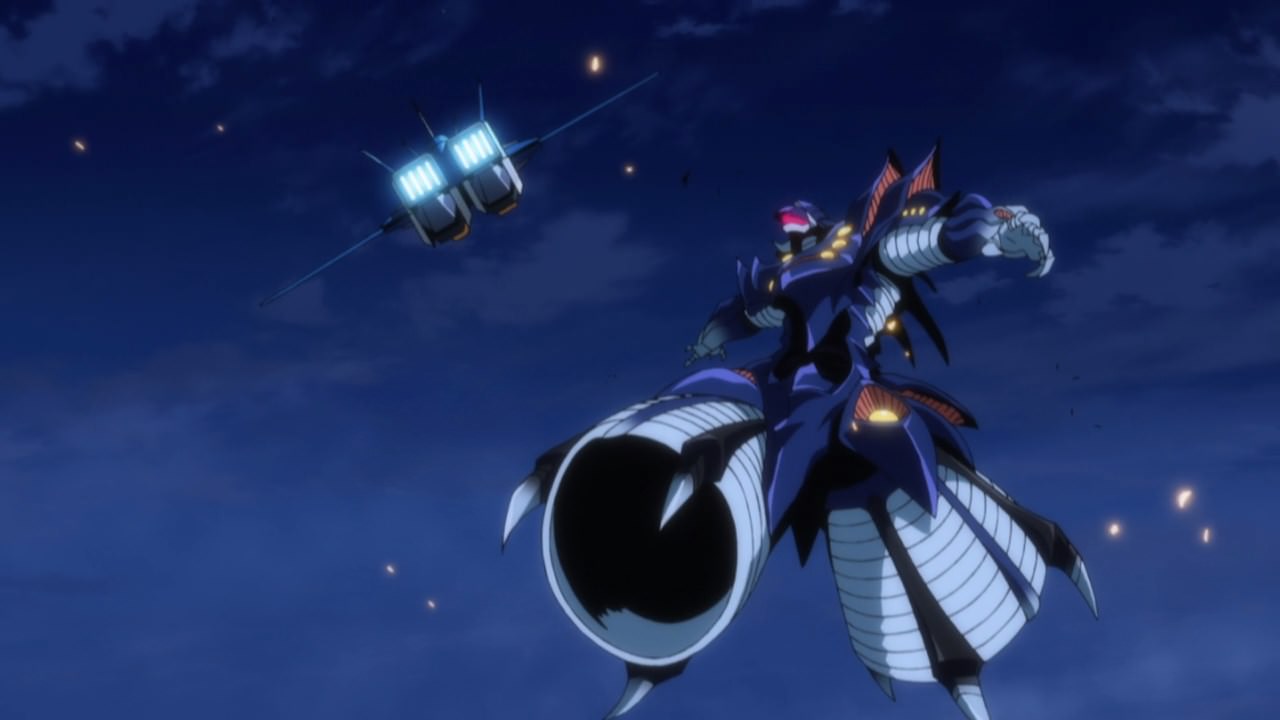 But enough talk about him as Sky Vitter will take care of Anti by ramming it. But what about the hyper agent? 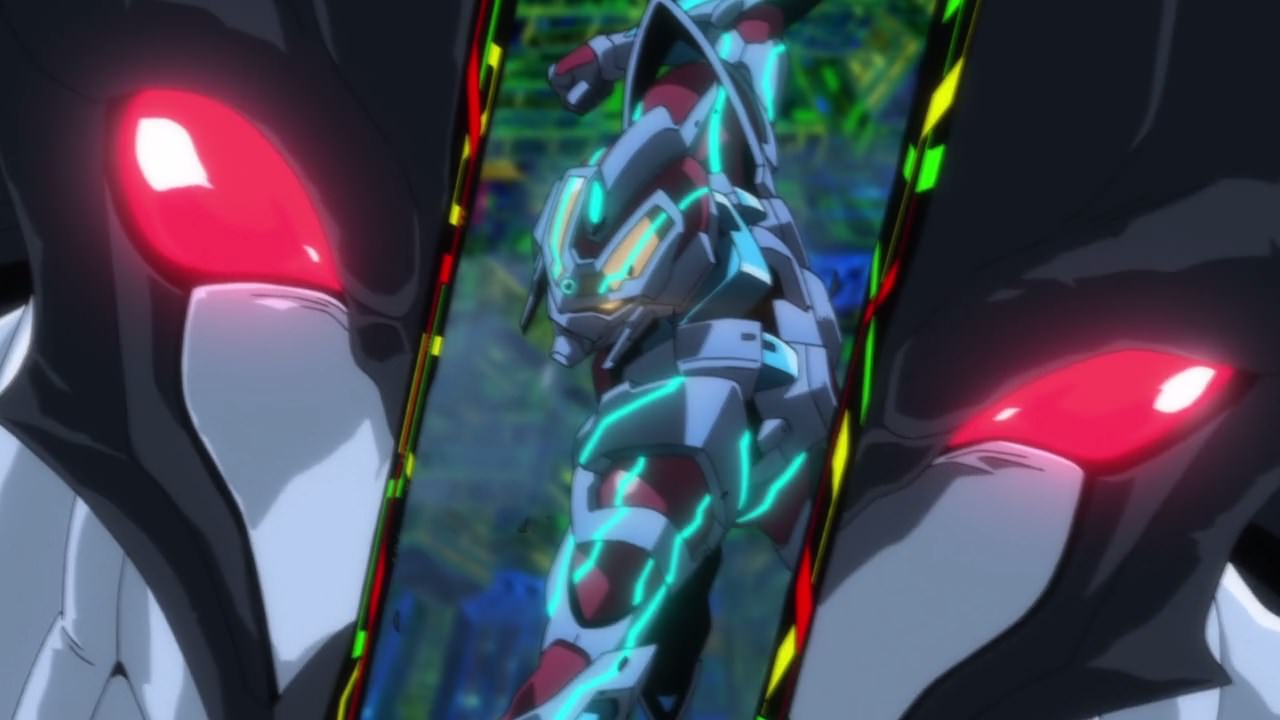 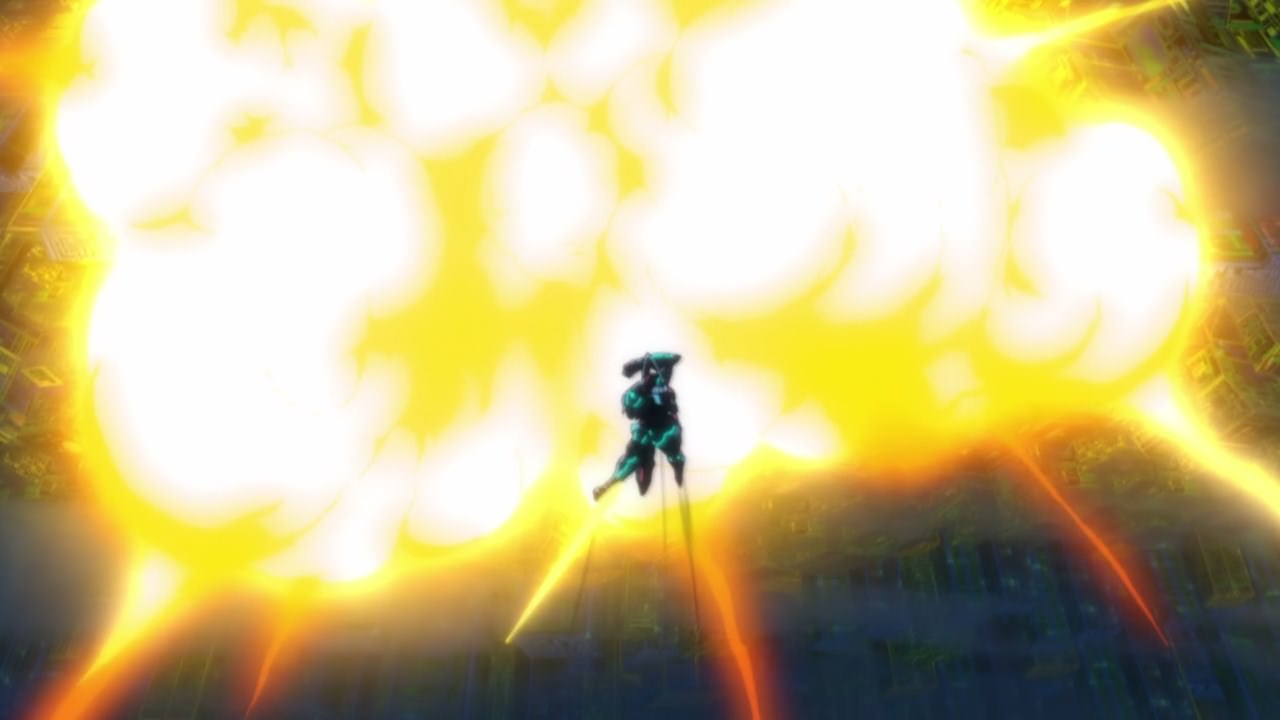 That takes care of this week’s monster and its drones. Still, Gridman will have to deal with Anti. 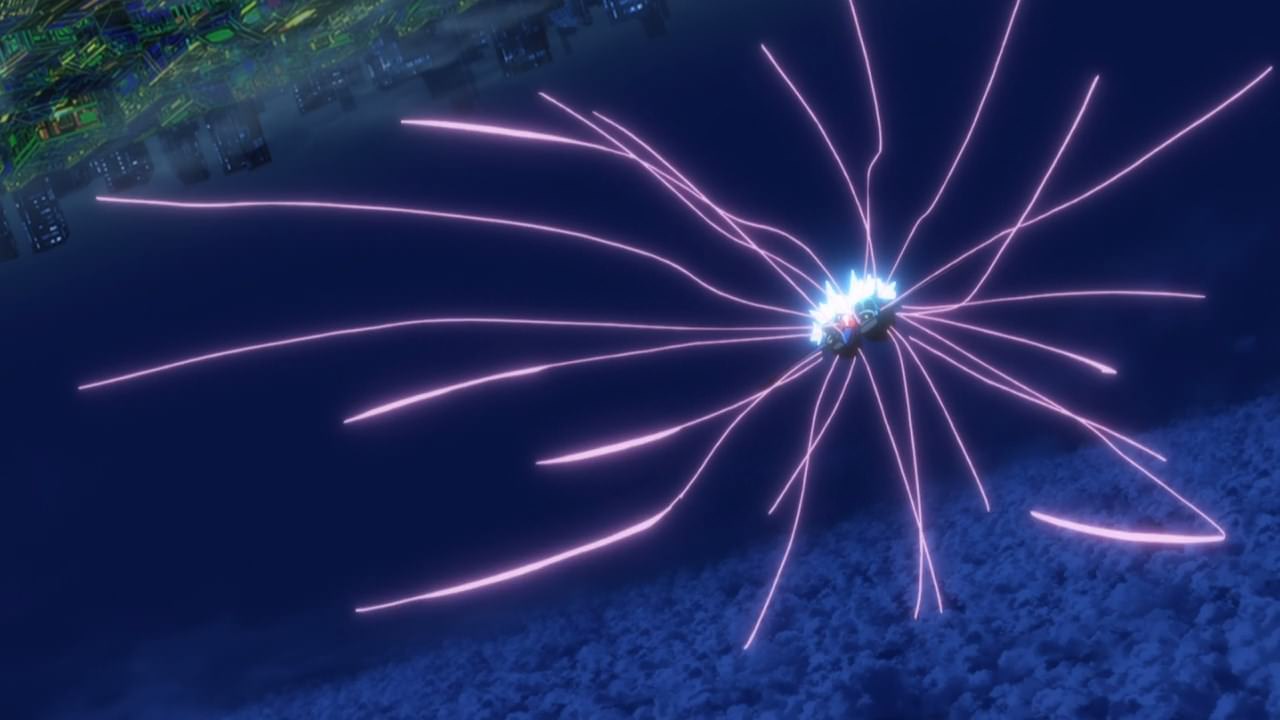 Fortunately, Sky Vitter will take care of that with the power of Itano Circus, using homing lasers instead of missiles. 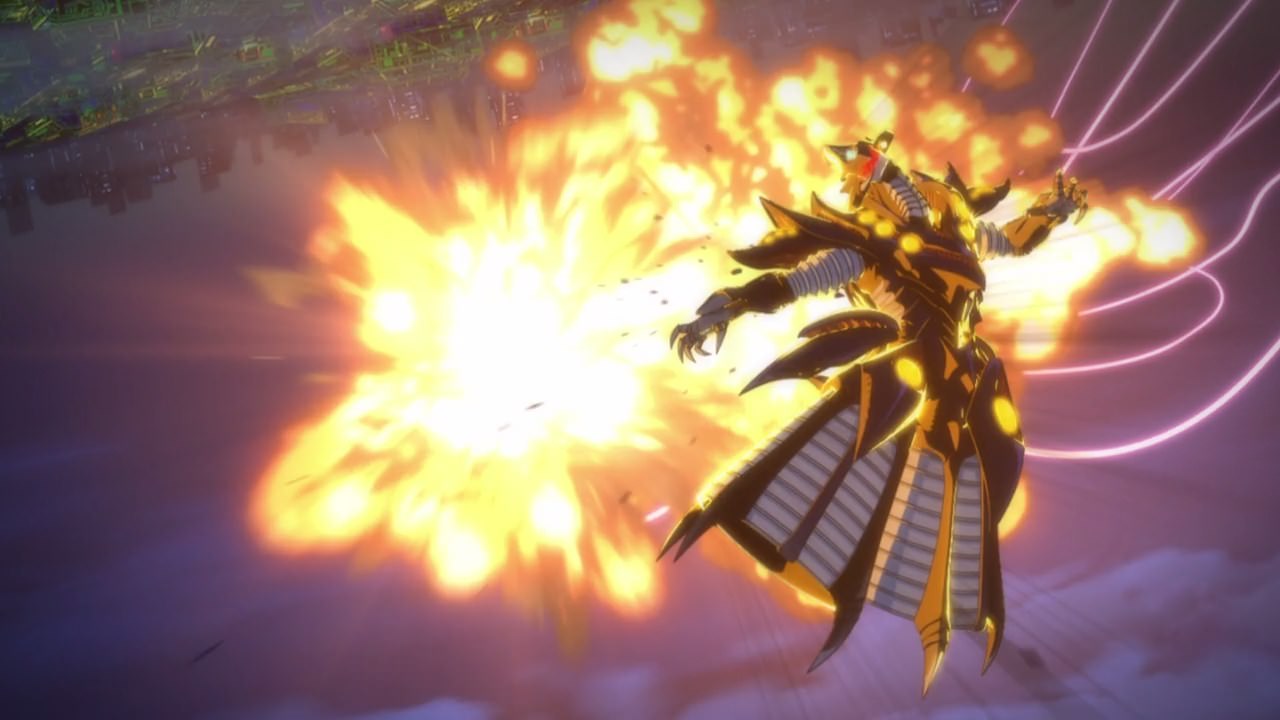 Well, looks like Anti is blasting off again as he failed to kill the hyper agent. And quite honestly, Akane thinks that he overstayed his welcome. 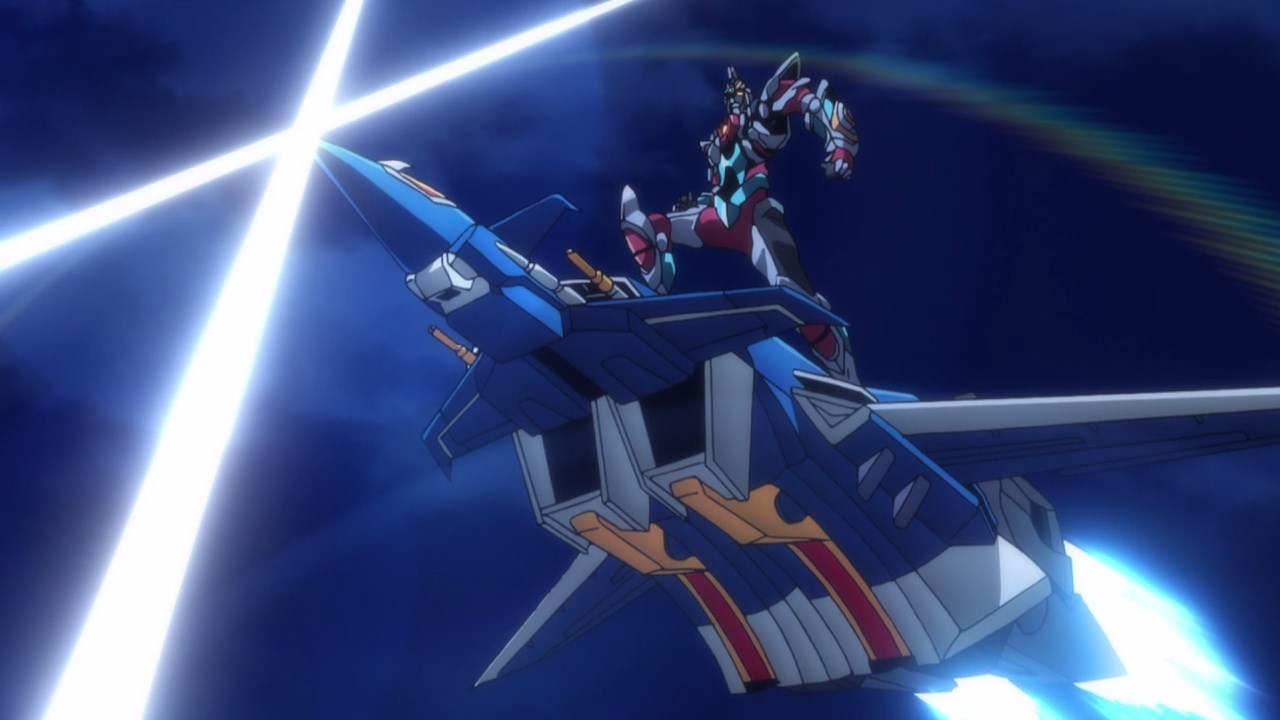 Anyways, the town is saved yet again as Sky Vitter and Gridman defeats another kaiju and kicked Anti’s ass. 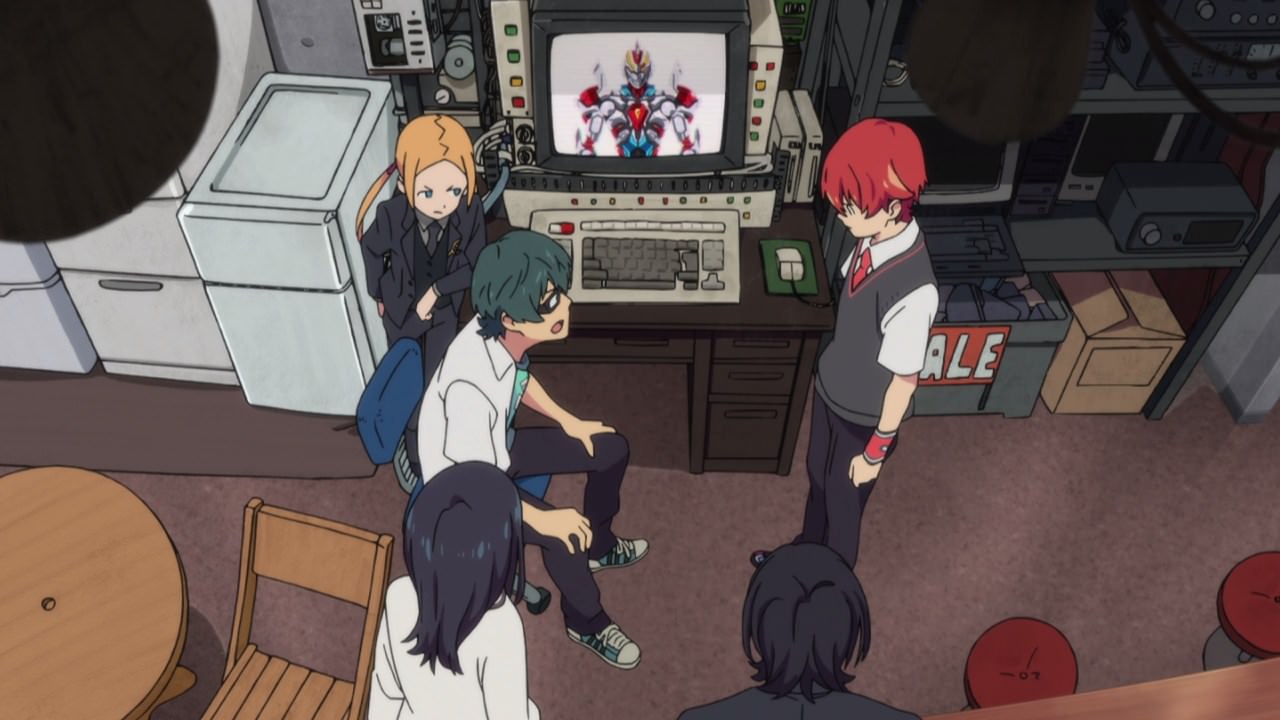 Then again, neither Rikka Takarada nor Shou Utsumi would believe to Yuuta Hibiki’s words that Akane Shinjou is the antagonist with Alexis Kerib helping her. This is sad. Alexa, play “youthful beautiful” by Maaya Uchida.

Ah screw that meme, Rikka and Shou needs to learn the truth right now or it’s too late! 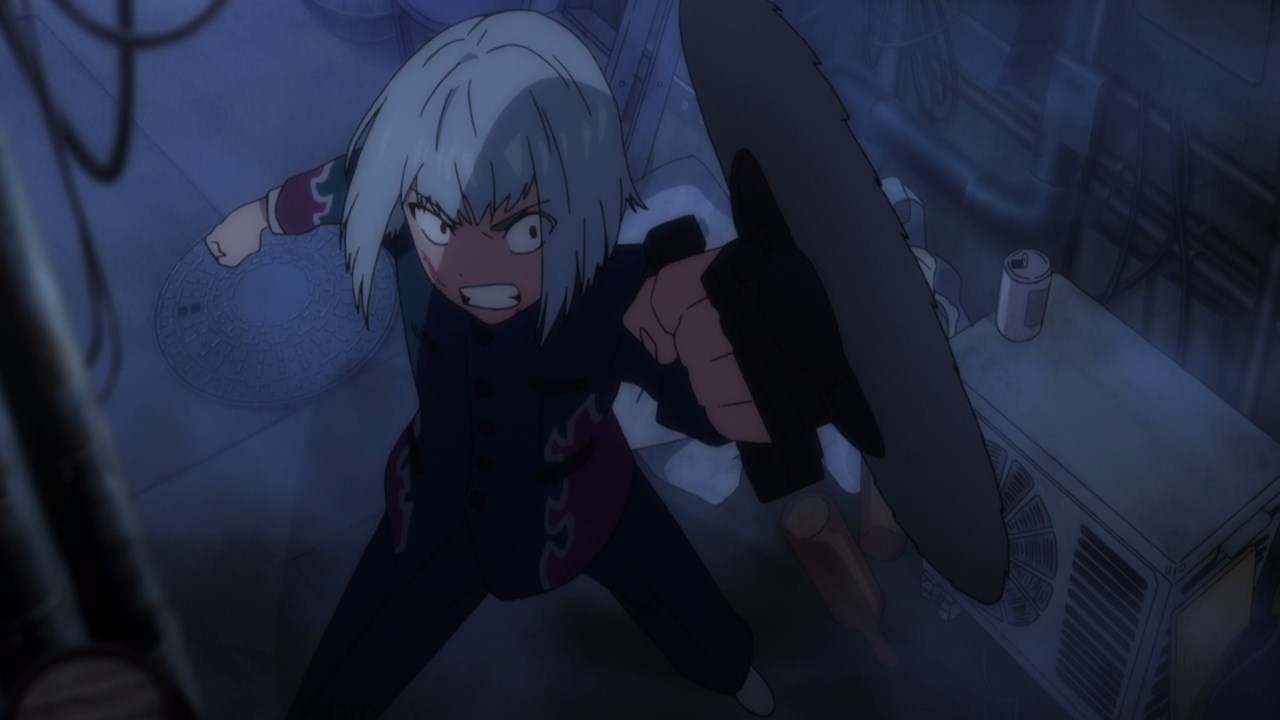 Meanwhile, here’s Anti as he encountered someone who wants to get rid of him. 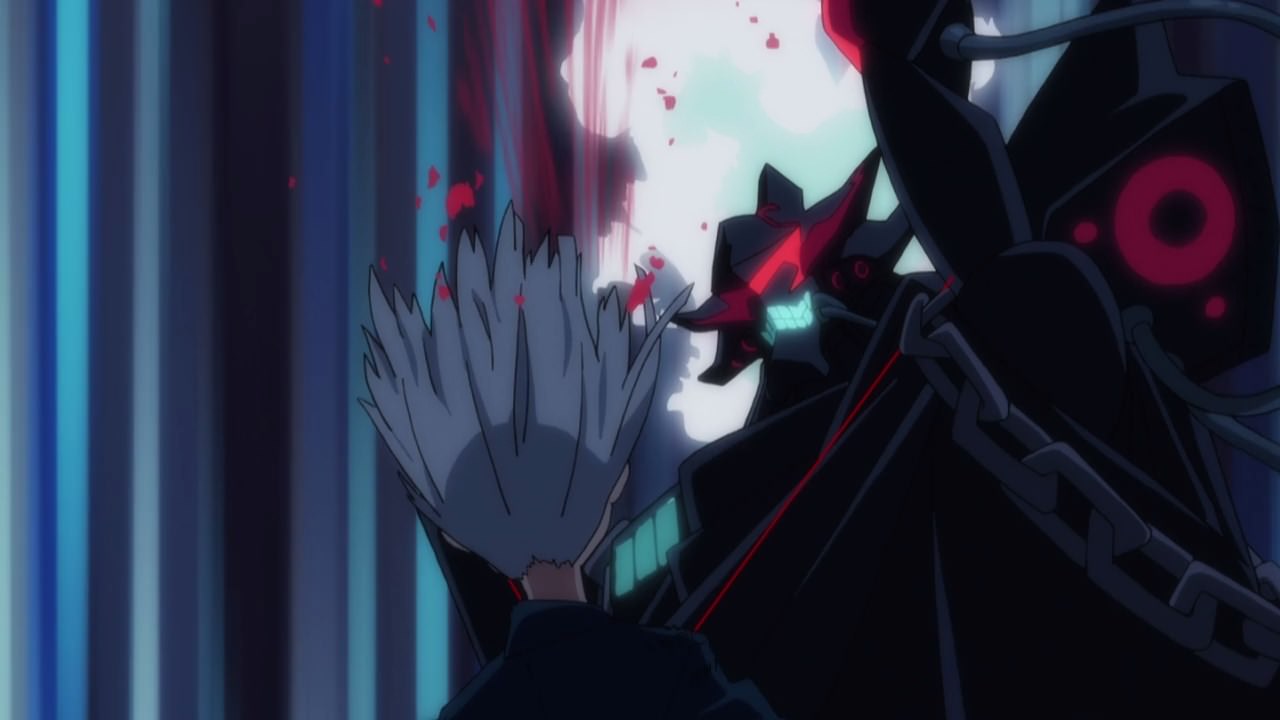 Someone like Alexis Kerib as he had enough of Anti’s failure and thus he kills Anti off with a circular saw. 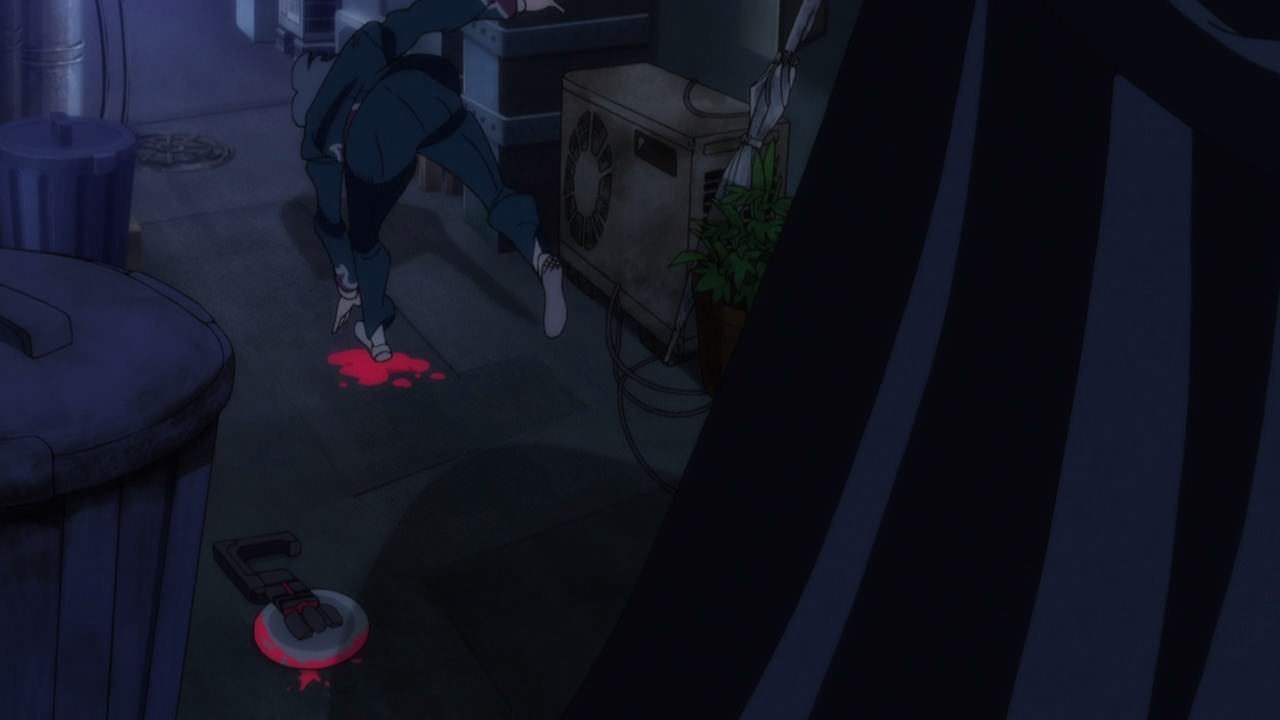 Then again, Anti lived to fight another day, albeit losing an eye because Alexis didn’t cut his head in half.

With that said, the plot is getting thicker and thicker as Yuuta Hibiki learns the truth beyond Tsutsujidai’s facade, especially the existence of the Computer World. Heck, Yuuta might know who he really is if he found the right pieces. Anyways, I’ll see you next time!