Hey guys, this is Rio Futaba as the real one is currently staying at Sakuta Azusagawa’s place because of her doppelganger, who was created because Rio created an account to take a selfie of her most valuable (yet annoying) assets.

However, turns out that it’s a bad idea because not only would took notice of Futaba’s photos and some asshole will prey on her, but it annoys the hell out of Saki Kamisato who doesn’t like her boyfriend getting stolen by someone like Rio Futaba as she points that out to Sakuta Azusagawa. Honestly, I feel that Saki Kamisato is somewhat annoying. 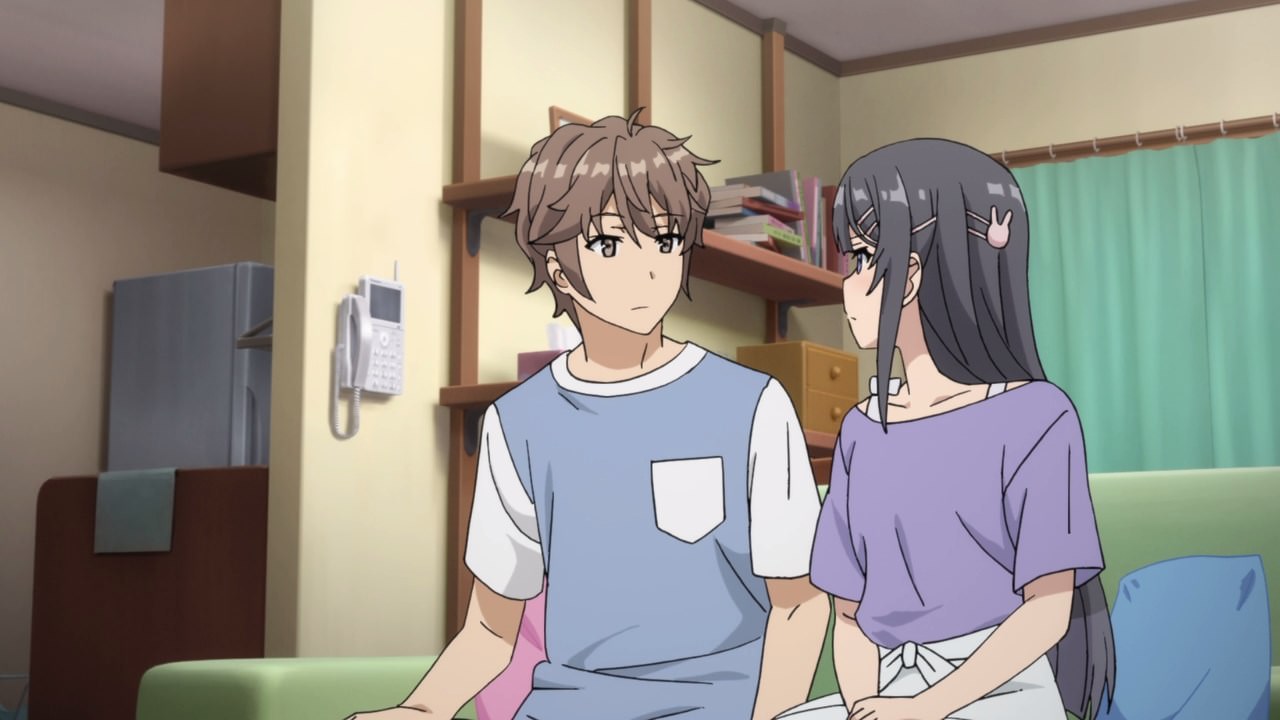 Meanwhile, here’s Mai Sakurajima as she told Sakuta that they can’t be together in public, something that’s quite sad for Azusagawa. C’mon, Mai-sempai is a celebrity compared to a normal guy like Sakuta-kun. 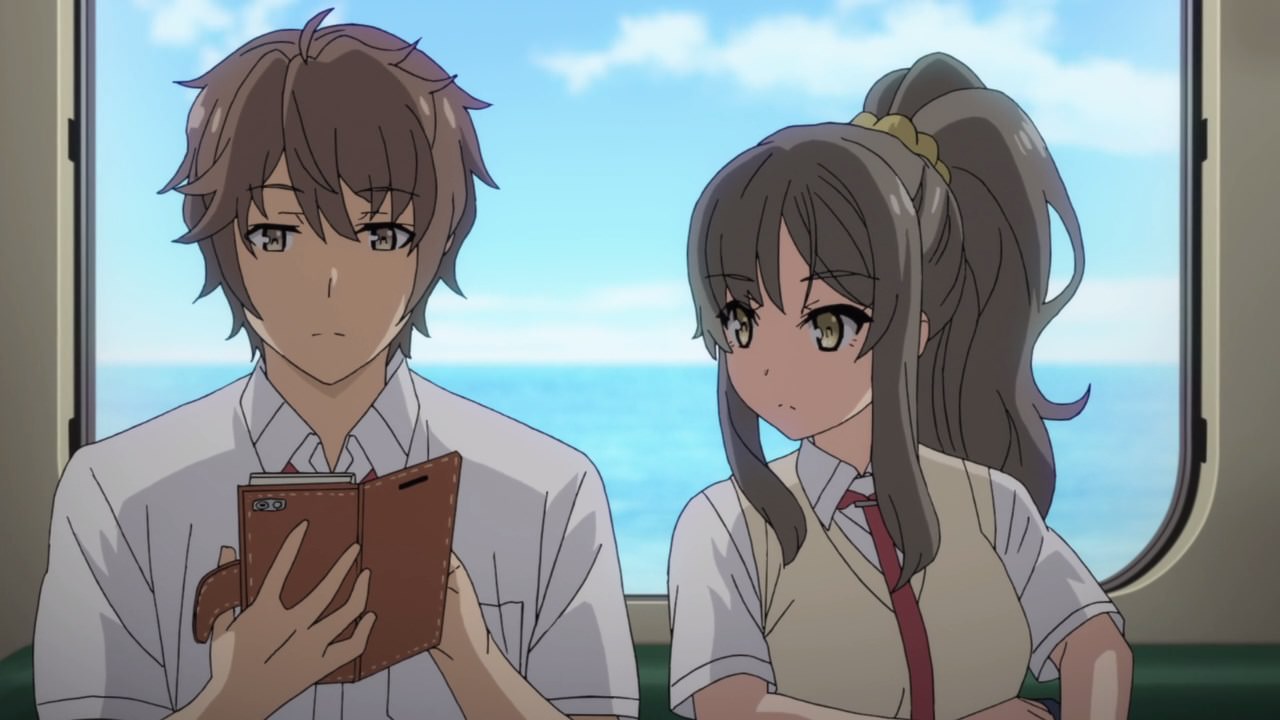 Now then, let’s move onto the fake Rio Futaba as she told Sakuta Azusagawa about her ever-growing body, particularly her breasts, that Futaba took photos of herself.

Then again, Rio felt guilty of doing such stupid things and besides, Futaba has an inferiority complex where despite her big bosom, she really hate her body. You know what, I think Rio’s body is fine, but taking selfies of her assets would have a lecherous person hunt Futaba down and rape her. 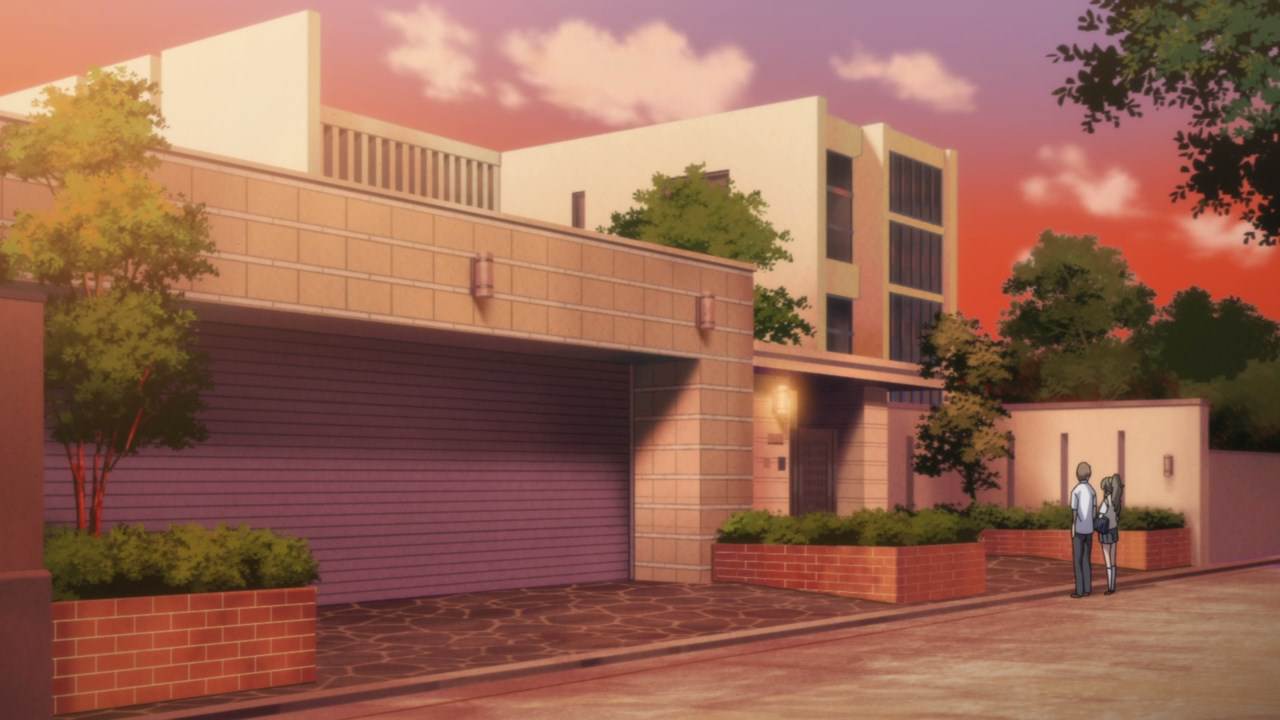 Anyways, looks like Rio Futaba will have to bring a bodyguard like Sakuta Azusagawa to her house, which turned out be a freakin’ mansion. Oh, and her parents are in Europe because they’re busy with work, which leaves Rio and Sakuta staying at this house… by themselves.

Of course, Rio would call Mai-sempai if Sakuta did something horrible like molesting her and other forms of sexual harassment. Yeah, Azusagawa should put some restraint when sleeping with a girl like Rio Futaba. 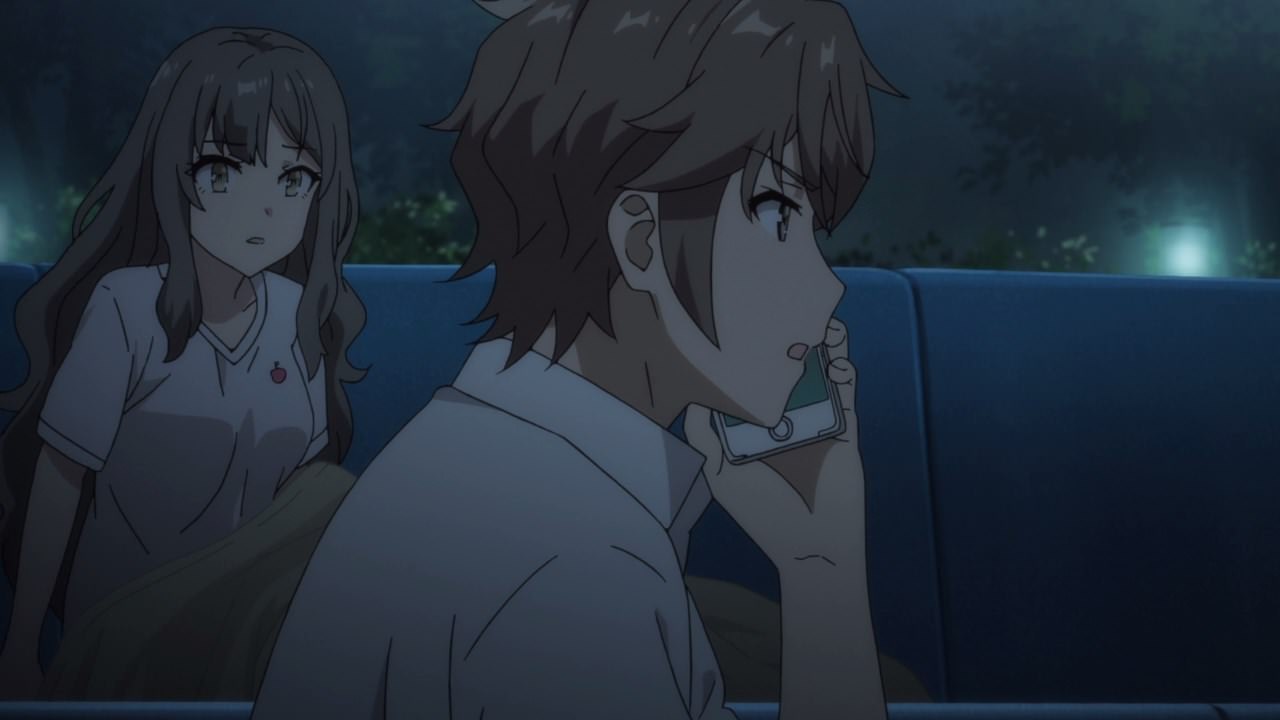 And speaking of Sakuta, he decides to call a friend that’ll put the doppelganger at ease. I wonder who that person is? 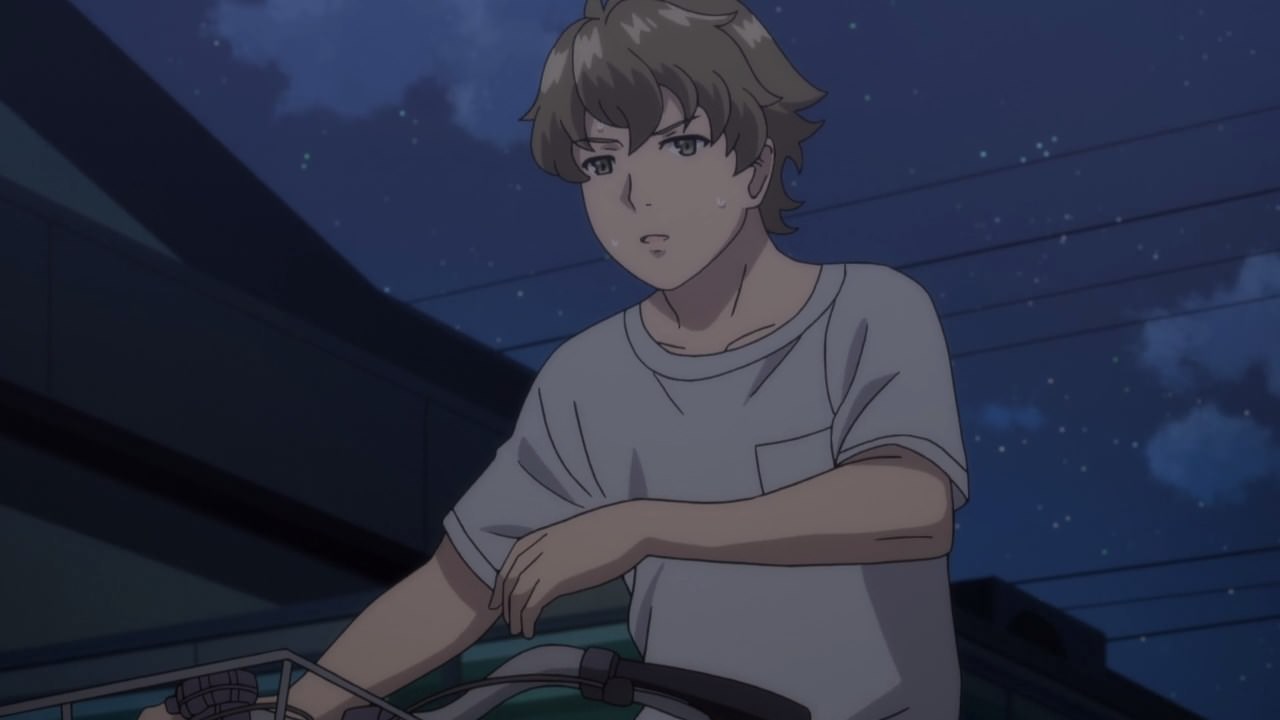 Well, it’s none other than Yuuma Kunimi as he pedaled his way to meet up with Sakuta and Rio. While he usually spends his time with his girlfriend, Yuuma had an argument with Saki so he went to his friends for the time being. 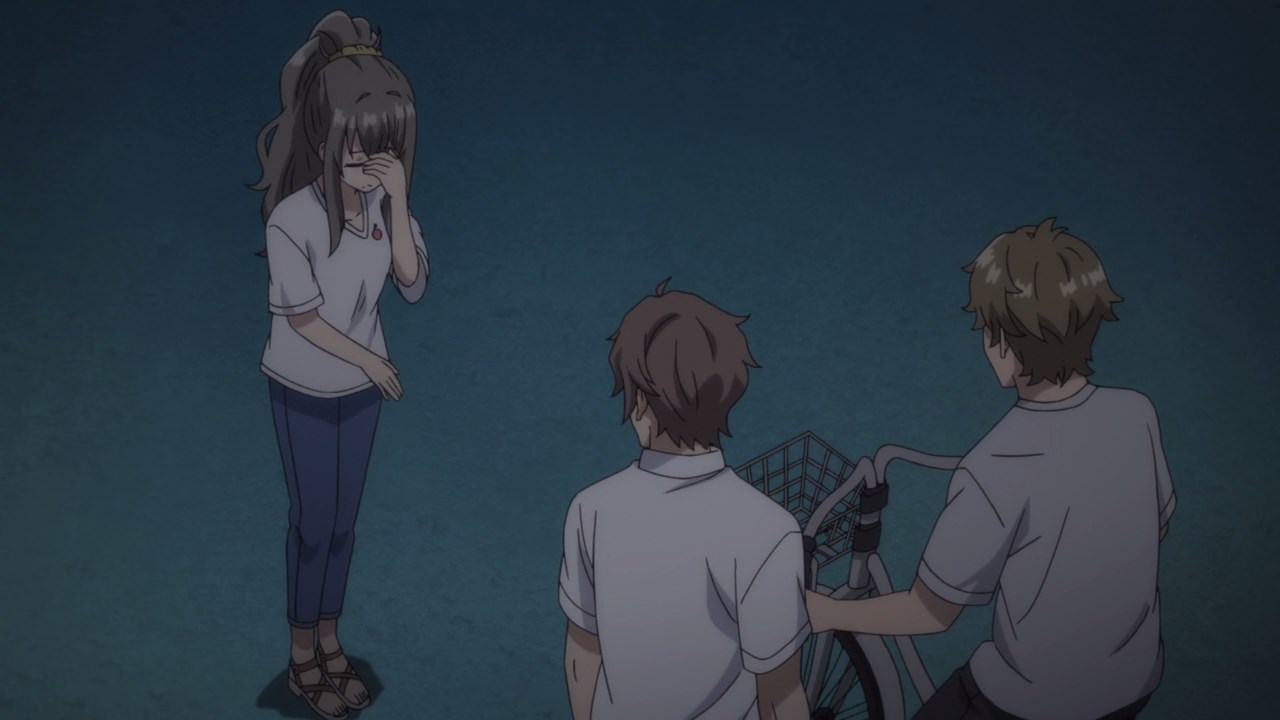 As for the fake Rio Futaba? Well, she’s happy to see Yuuma Kunimi that she was moved into tears. You may thank Sakuta Azusagawa for calling Yuuma in the middle of the night. 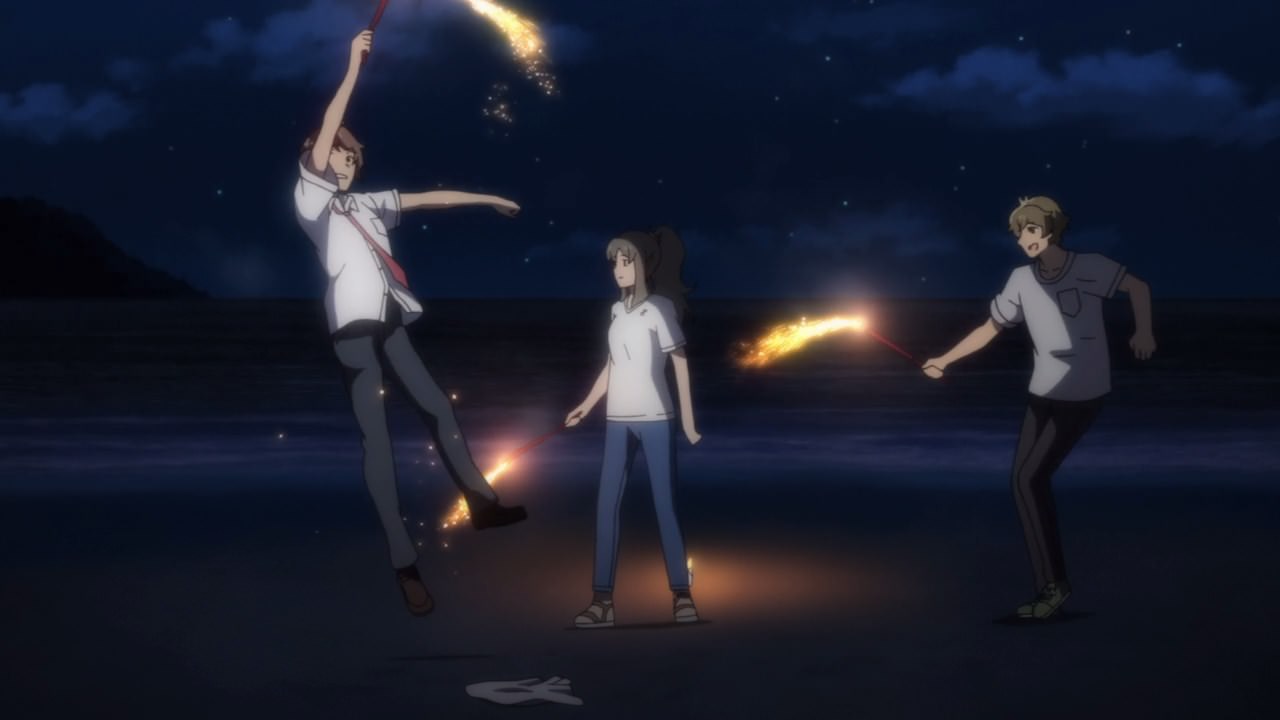 And so, the trio spent their time at the beach by lighting up some fireworks. After all, it’s summer and what a better way to spend it is some sparklers, roman candles, and firework fountains. 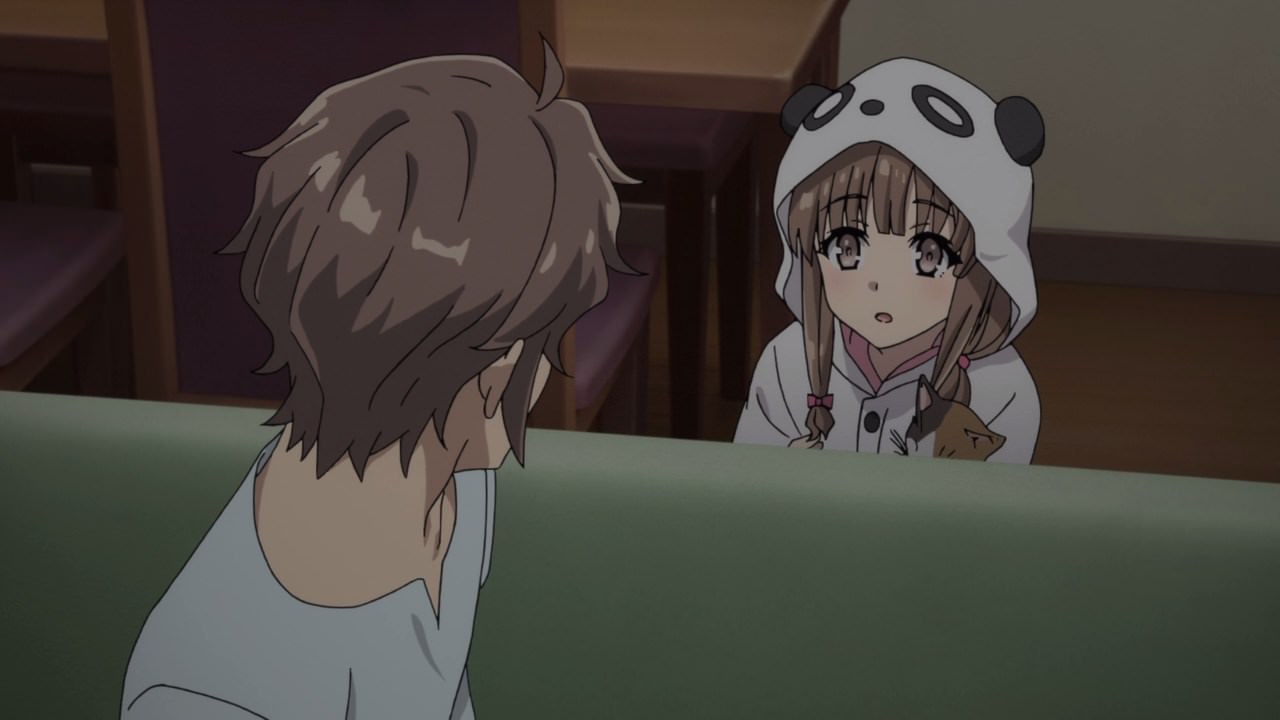 But after spending the night having fun at the beach, his sister Kaede told him that Rio went shopping. Hmm, why did she went outside on this unusual day? 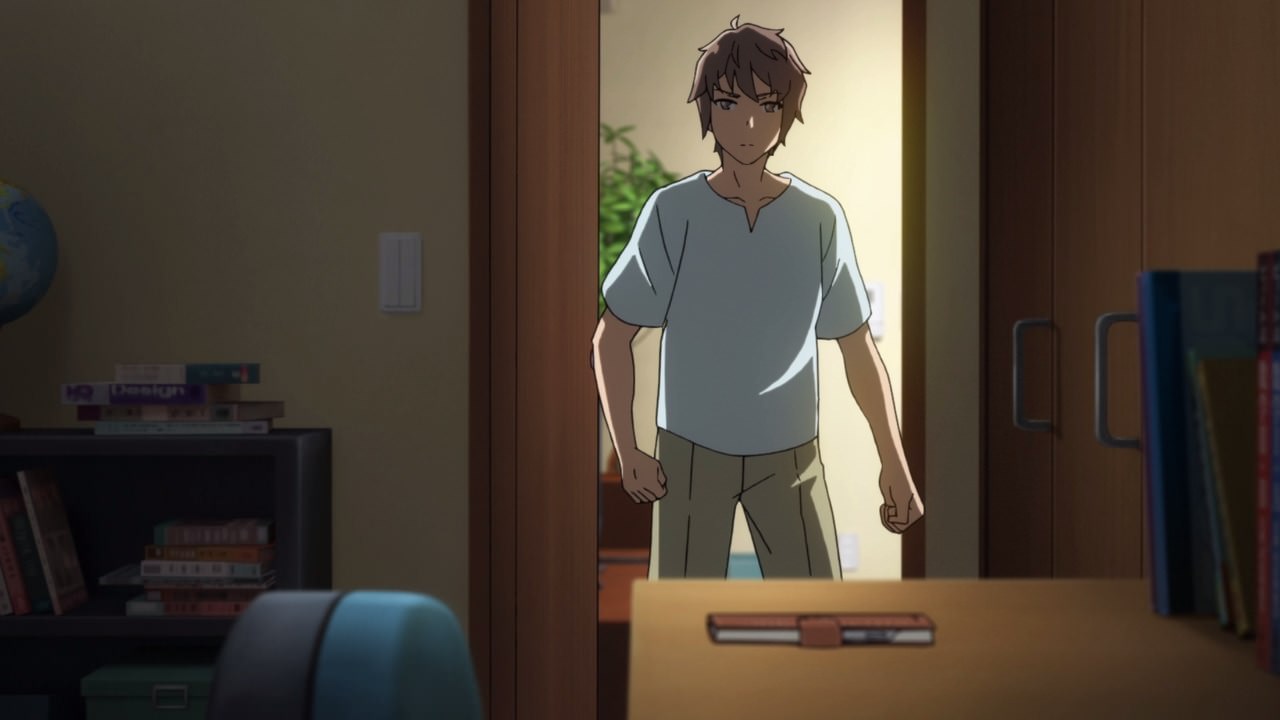 Also, Rio left her cellphone which annoys Sakuta-kun that it’ll be hard for him to find Futaba outside of his apartment.

But the reason why Futaba left is because she saw a photo of her doppelganger hanging-out with her two friends. 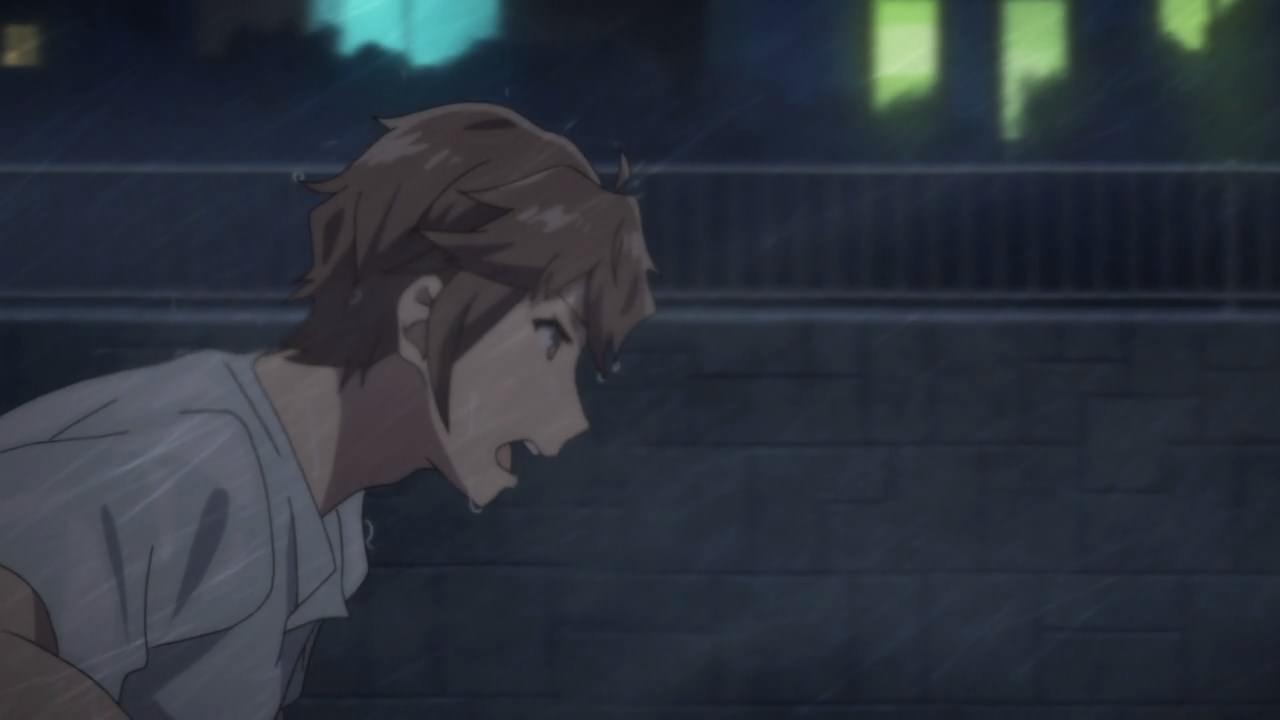 Oh, and did I mention that there’s a typhoon? Yeah, it’s dangerous outside but that doesn’t stop Sakuta Azusagawa from finding Rio Futaba despite the heavy rain and strong gusts of wind. 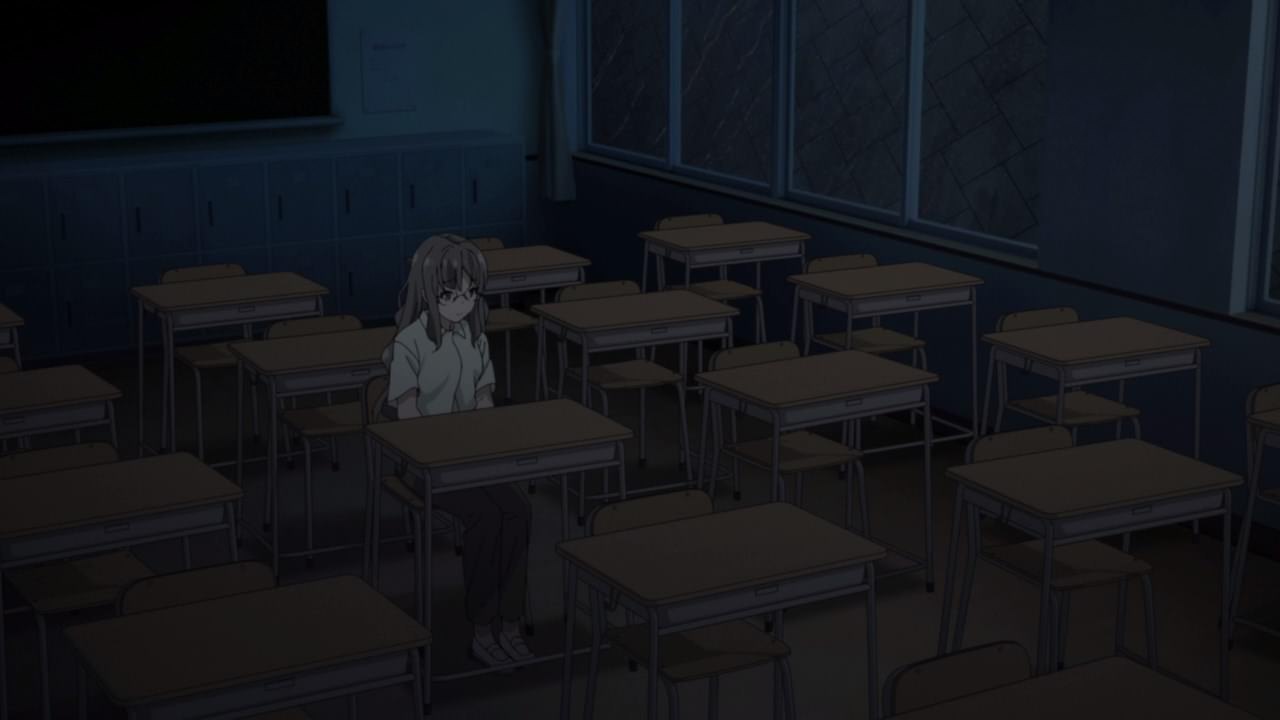 In any case, turns out that Rio Futaba went to Minegahara High School as she decided to disappear from this city and eventually everyone because the real Rio thinks that the doppelganger is better than her. 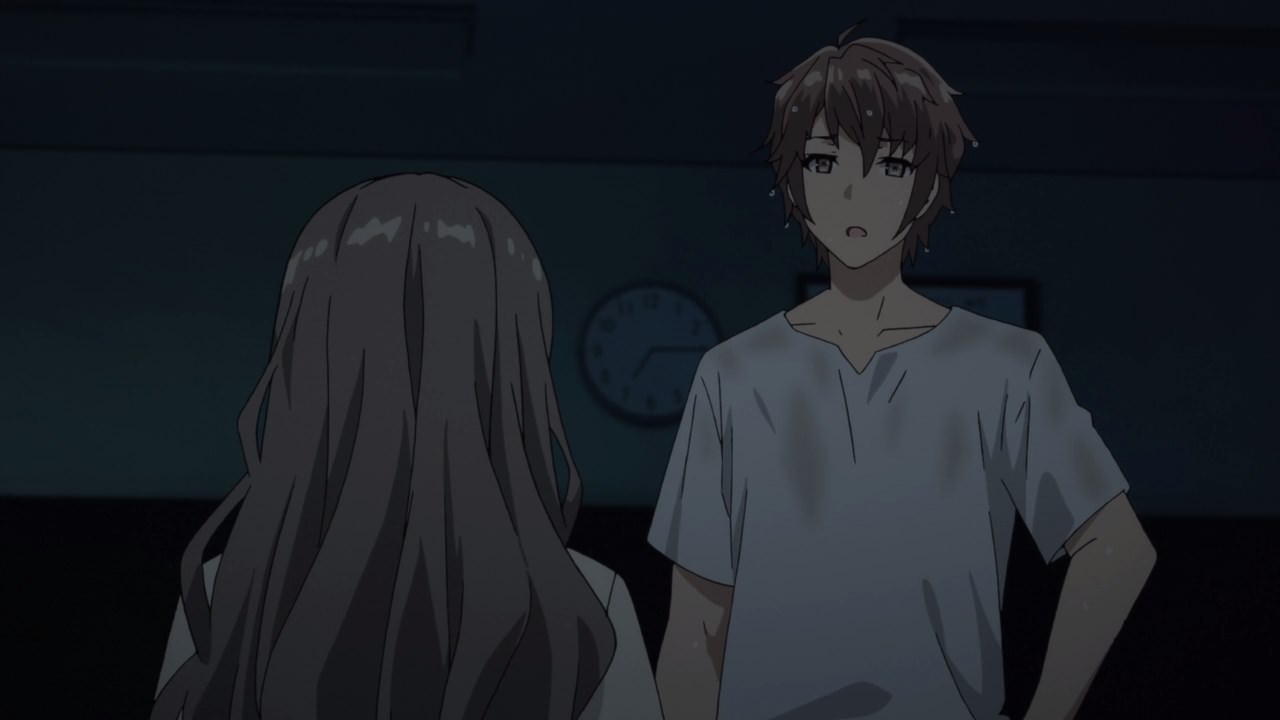 Then again, that’s not the case as Sakuta Azusagawa managed to find Rio and told her to meet up with him and Yuuma on August 19 at Enoshima for the fireworks display.

Um Sakuta, do you have something to say to Rio like “please don’t disappear from this world because you’re my friend” and other stuff? Man, I have to say that he’s insensitive to others sometimes! 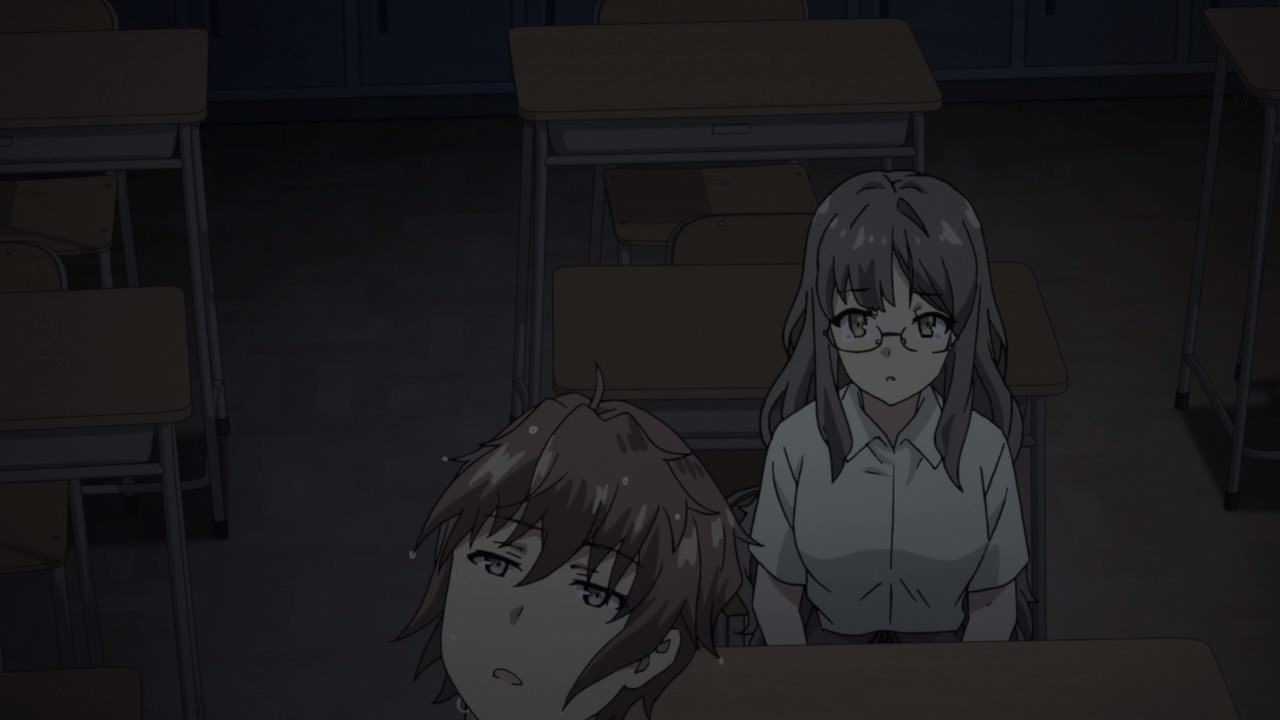 Regardless, Azusagawa finally found Futaba as he collapsed due to exhaustion. Oh, and let’s not forget that he went through the rain without a coat. 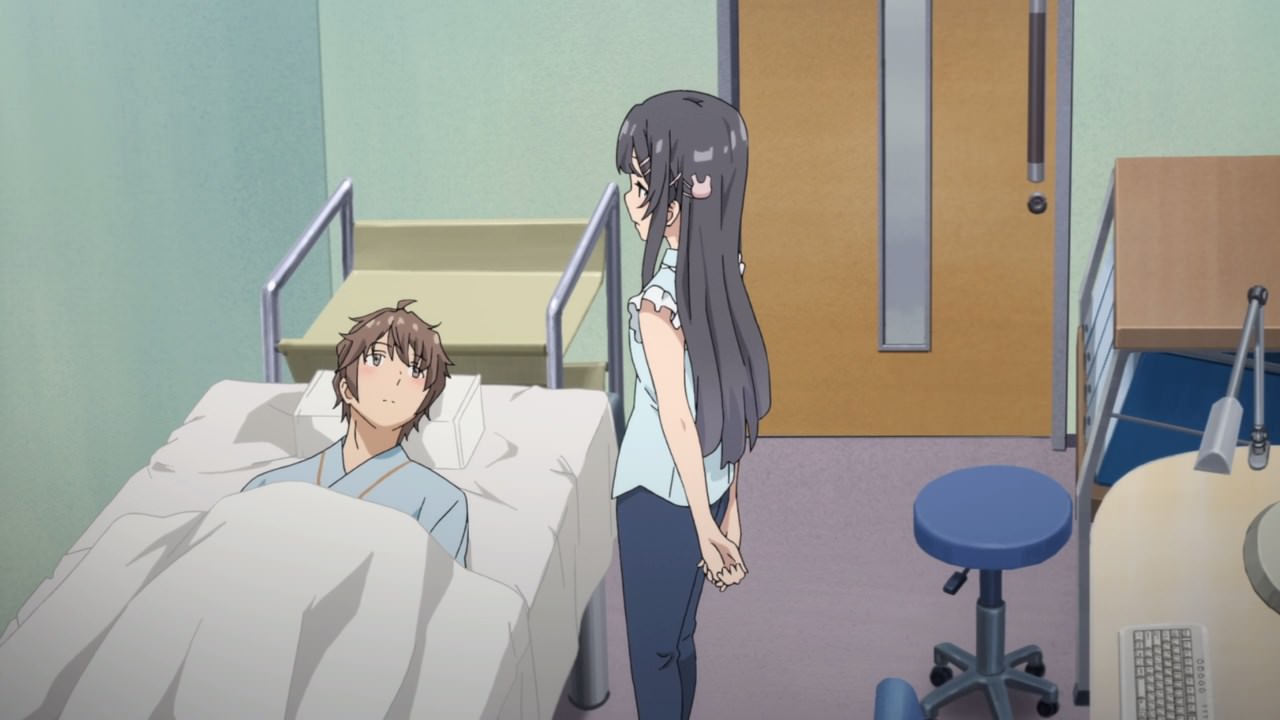 Still, Sakuta Azusagawa somewhat end up in a hospital as Mai Sakurajima woke Sakuta up and told him that it was Rio Futaba who took him in. Speaking of Rio Futaba, what happened to her? 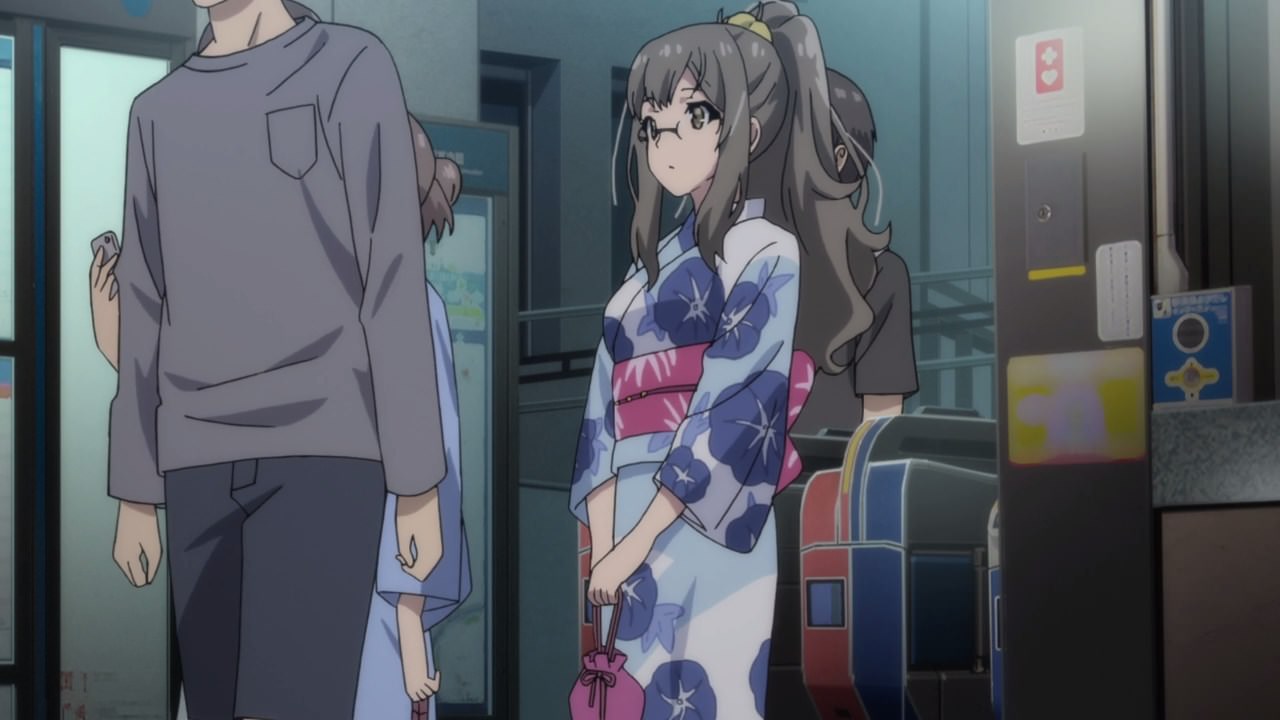 It turns out that her Puberty Syndrome has been cured, which means that the real Rio and her doppelganger have merged into one.

Now, Rio Futaba is wearing a yukata and sporting a ponytail, all while keeping her glasses on because that’s what she looks like. Glad that her problems are solved and man, Rio Futaba is so damn cute! 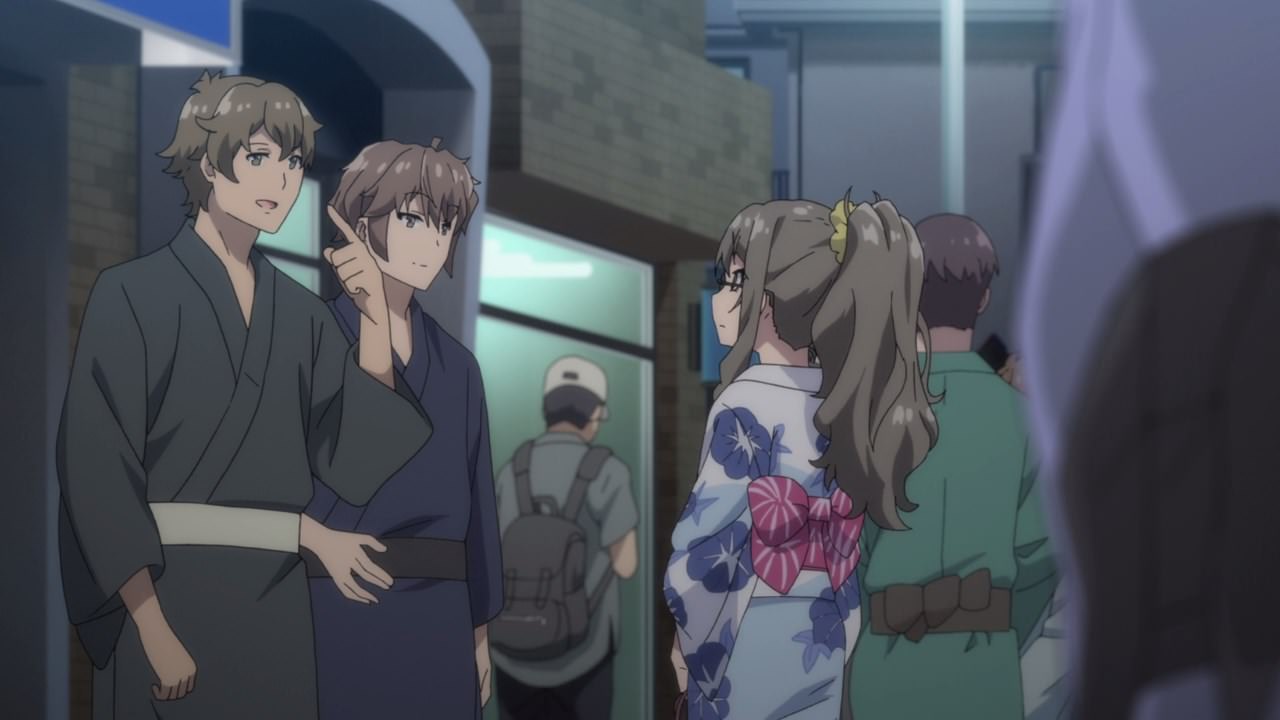 Even Yuuma Kunimi and Sakuta Azusagawa commented that Rio looks gorgeous in her yukata. Still, it sucks that Futaba can’t become Kunimi’s girlfriend because he has Kamisato. I guess they’ll remain friends! 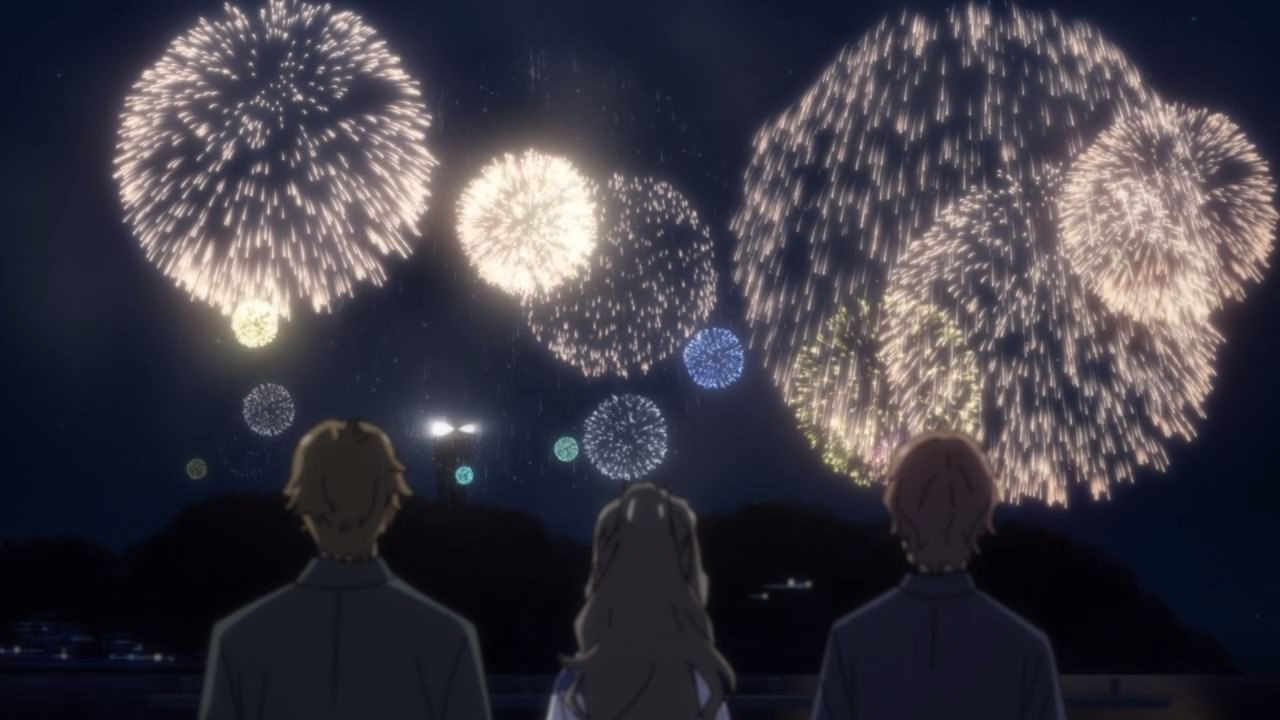 Well then, looks like we’re done watching this two-part story arc of Rio Futaba and all I can say is that she’s an interesting character where despite being smart and having a nice body, Rio has some insecurities on herself due to a guy she has a crush with. Of course, the lesson learned here is that you need to show your true feelings without holding back (or create another doppelganger), which is why Rio Futaba told her feelings to Yuuma Kunimi despite the eventual rejection.

With that said, it was a good story arc and I’ve enjoyed watching how Sakuta Azusagawa solved Rio Futaba’s Puberty Syndrome even though he didn’t do much other than giving her and Yuuma some hints so that they’ll took notice. Now then, let’s move onto the next story arc…