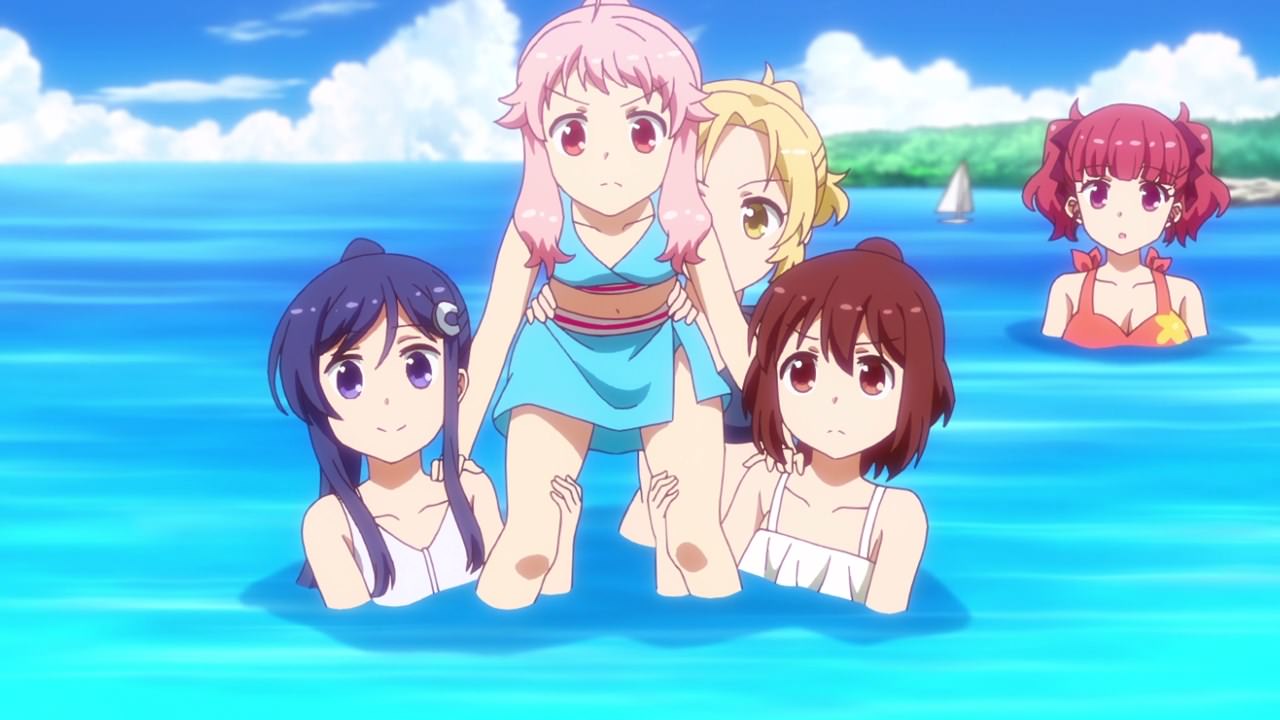 On this penultimate episode, the girls from Kaminoki High School’s cheerleading club are still honing the bodies and skills part of their training camp regiment.

Even if they’re bathing at the ocean, Kohane Hatoya and the rest are practicing for the biggest stunt ever, the shoulder straddle. 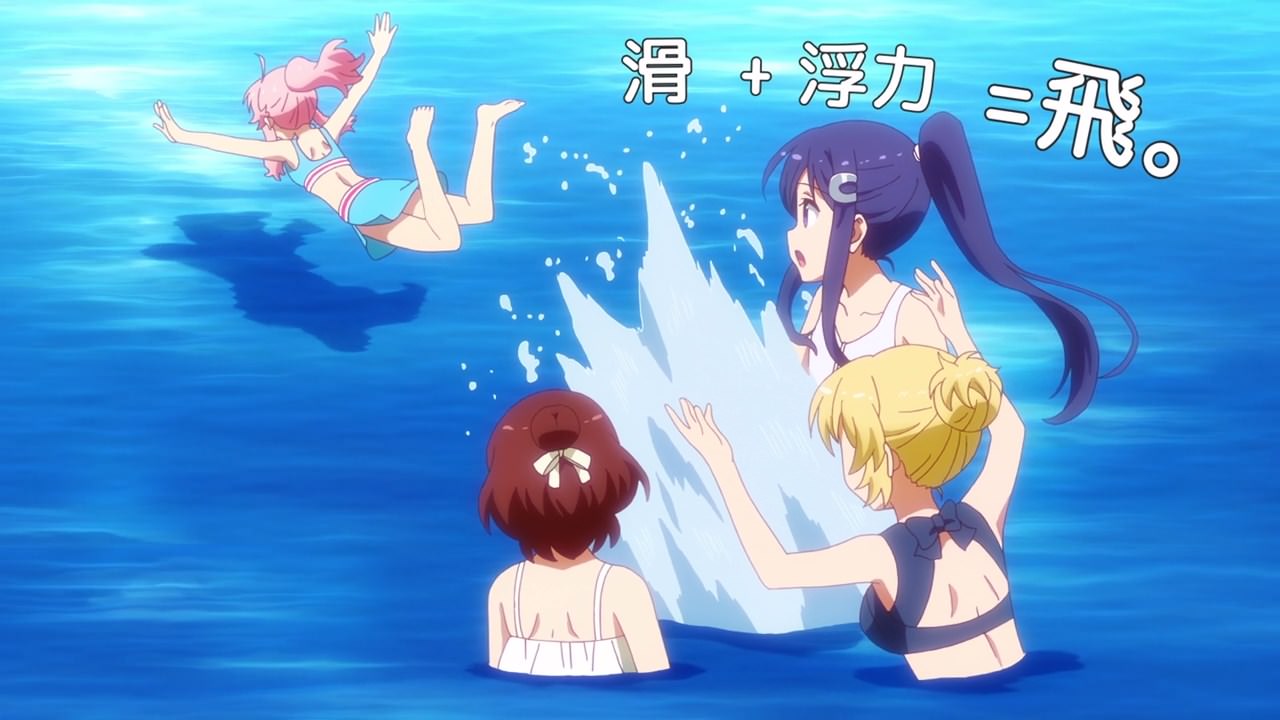 Then again, seems that they’re having trouble balancing and getting the stunt right, especially Kohane where she just flung around like a pebble skipping over the water surface.

You know what, I think Kohane needs more Cheer Power to not fall over. 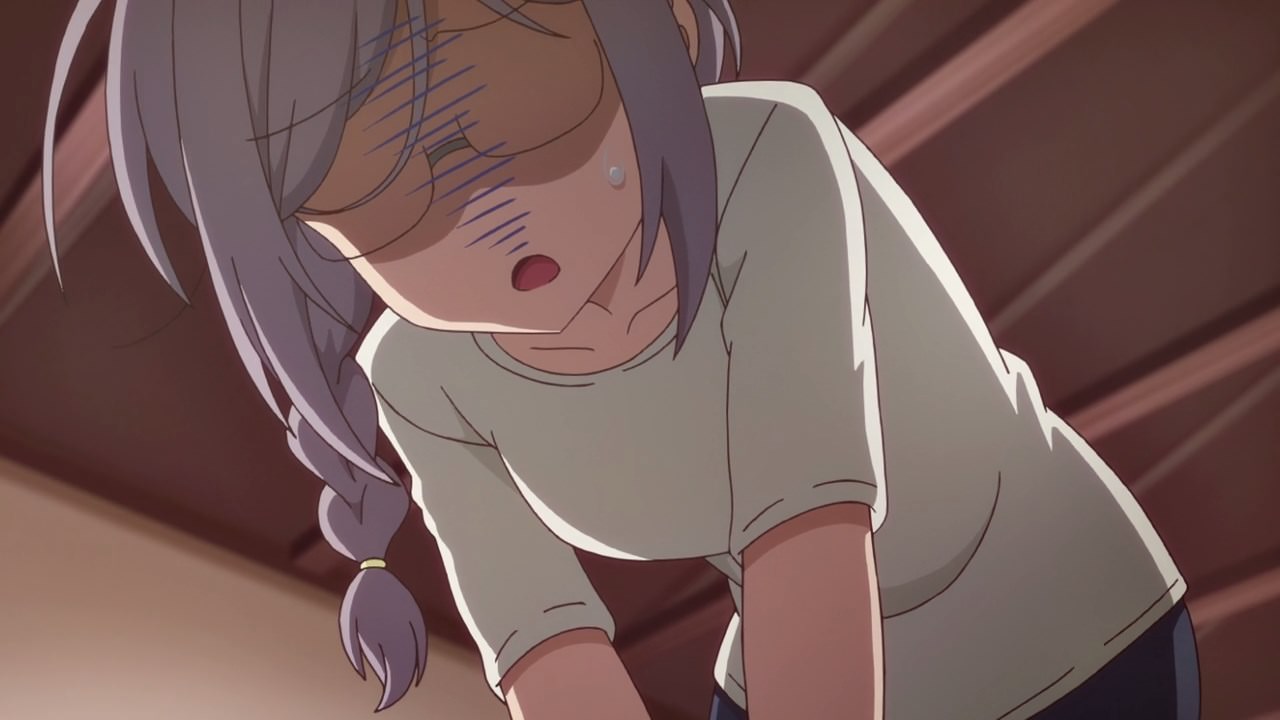 Meanwhile, here’s Inukai-sensei and I almost forgot about her. Still, Inukai-sensei is pretty tired as always but she wants to help the students… 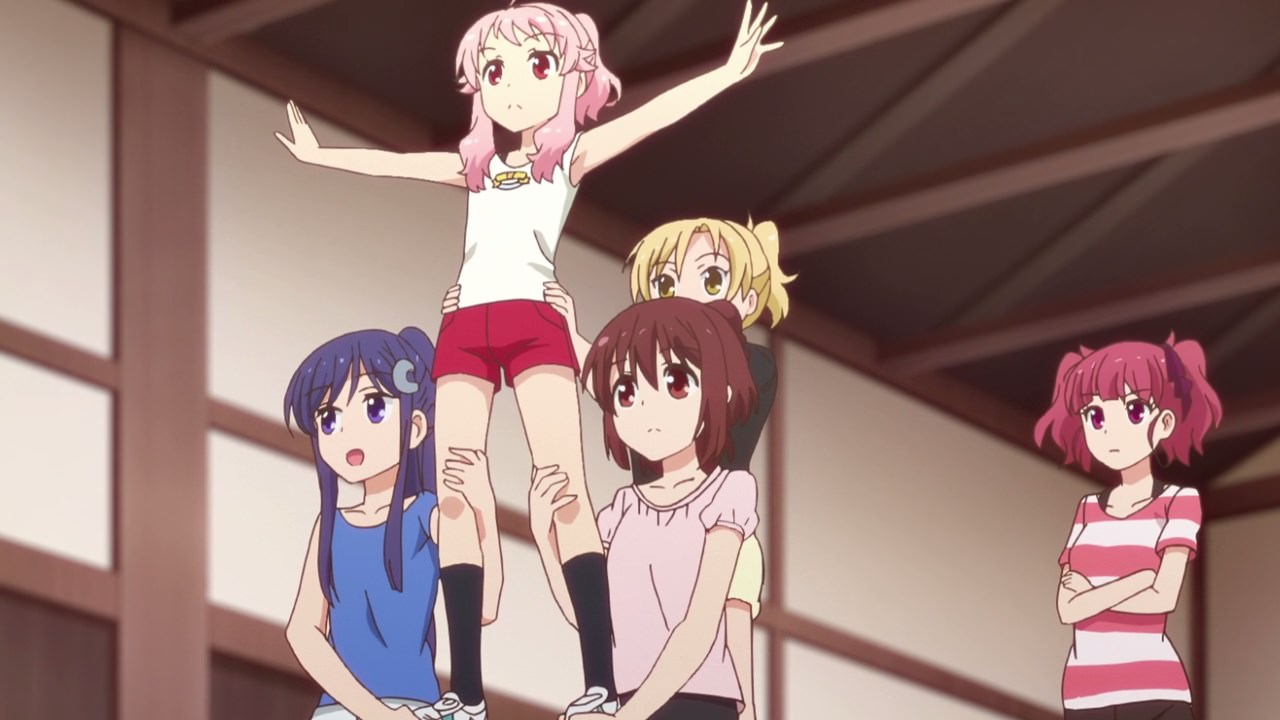 …by becoming a human vaulting box so that Hatoya can practice her lifting skills. Well Inukai-sensei, good luck over there! 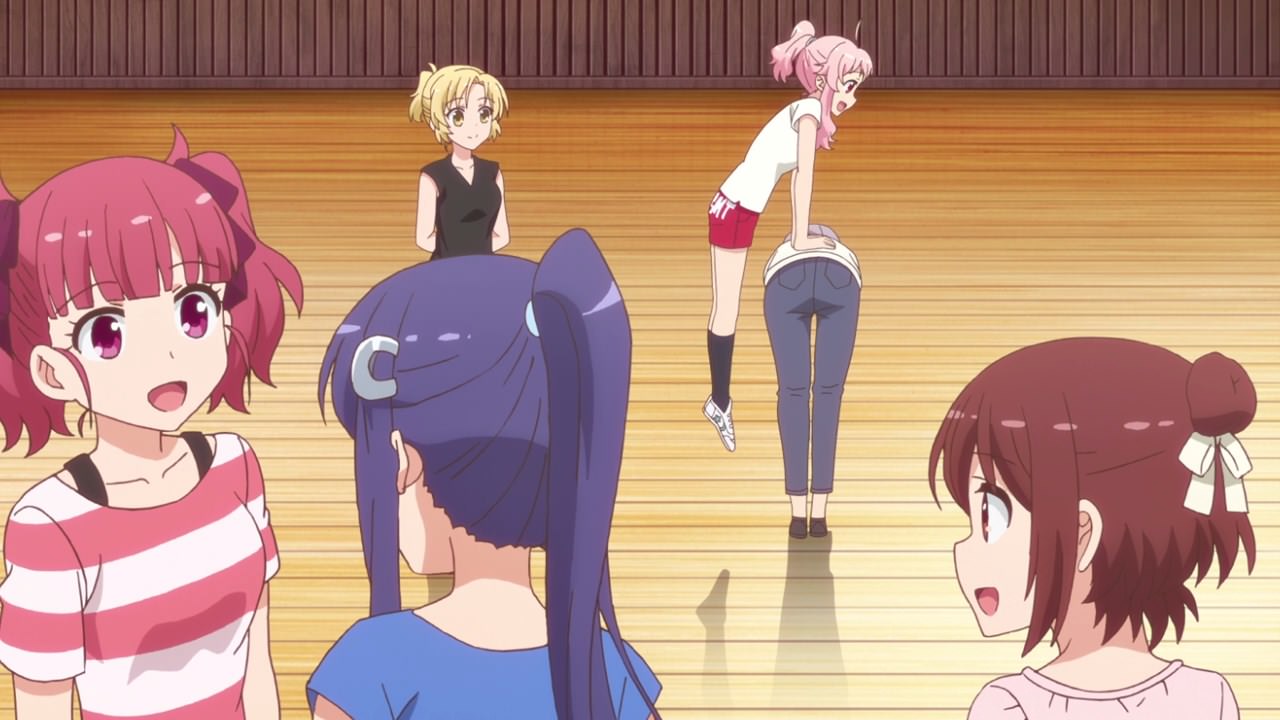 Now then, we return to their attempt to perform a perfect shoulder straddle starting with the double base thigh stand where Uki Sawatari will carry Kohane Hatoya from the shoulders. Sounds simple, right? 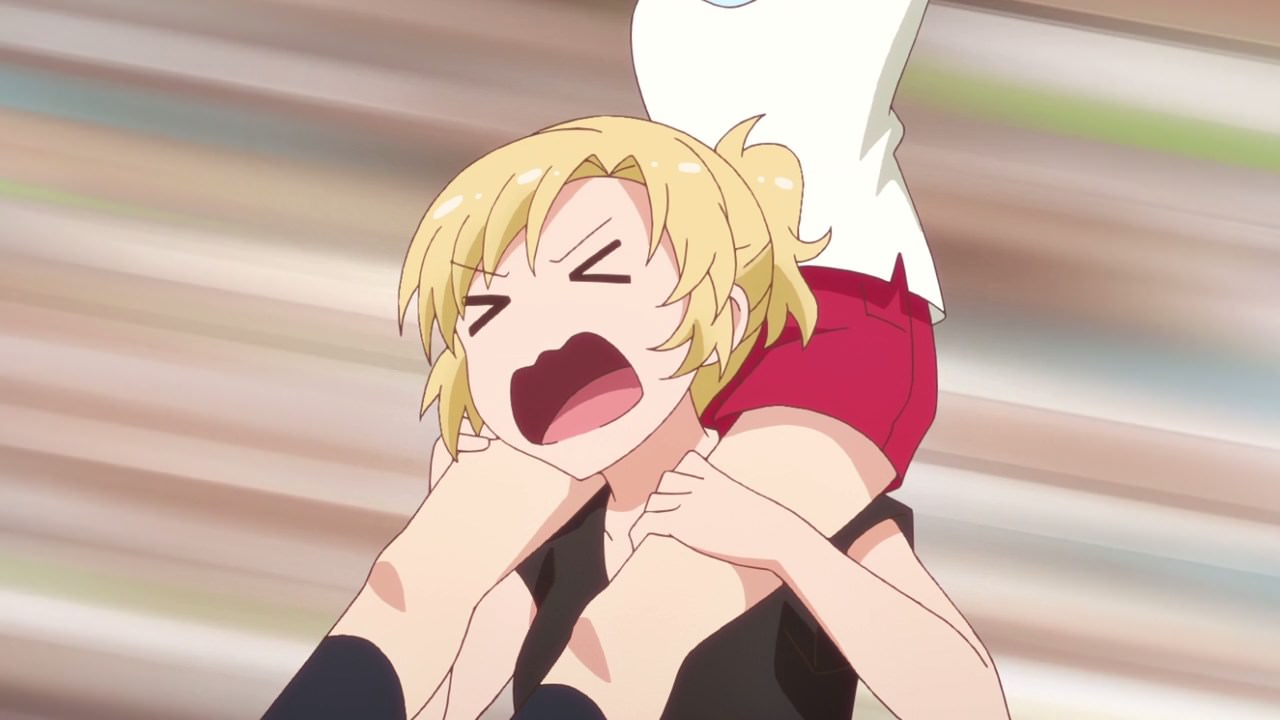 I mean, Uki can carry Kohane like a gorilla ’cause she so strong. However, the reason why she wants to carry Hatoya is because Sawatari wants to feel her thighs. Cheeky move there! 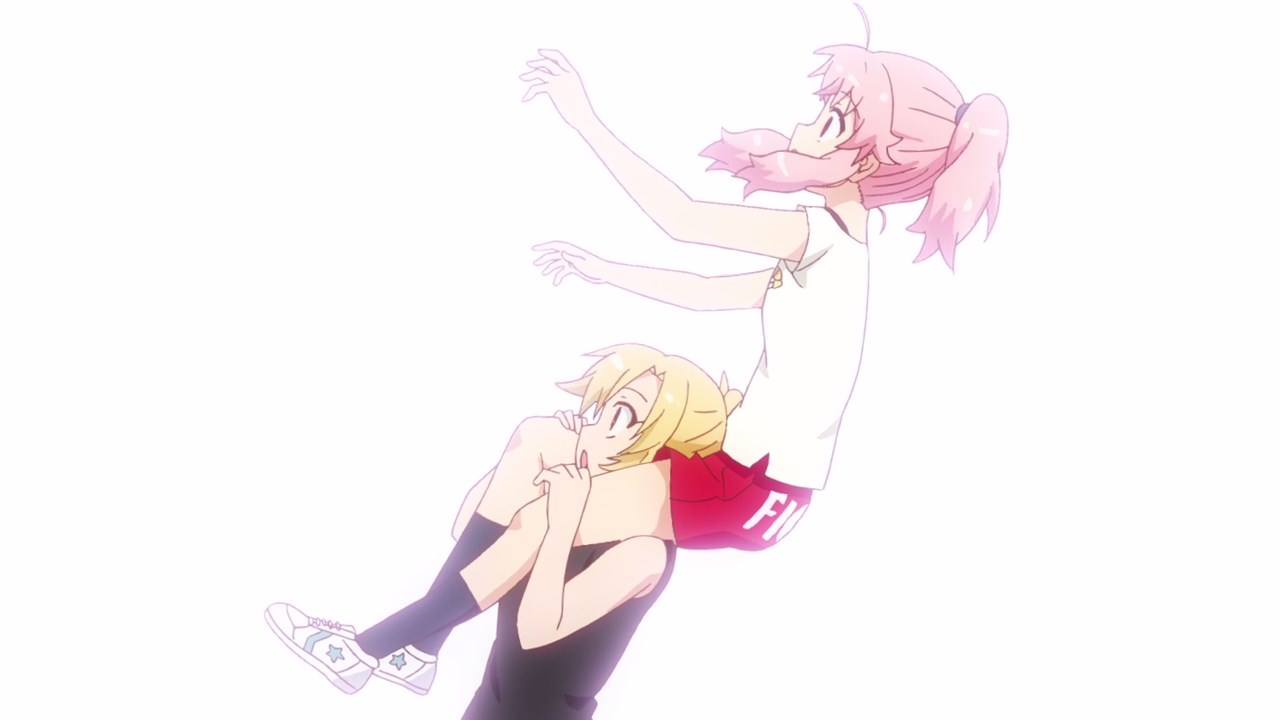 Unfortunately, Uki’s fascination over Kohane’s thighs has distracted her that she and her friend are gonna fall down and injure themselves.

Then again, Kohane Hatoya will get hurt a lot as she’s gonna get slammed like a wrestler. 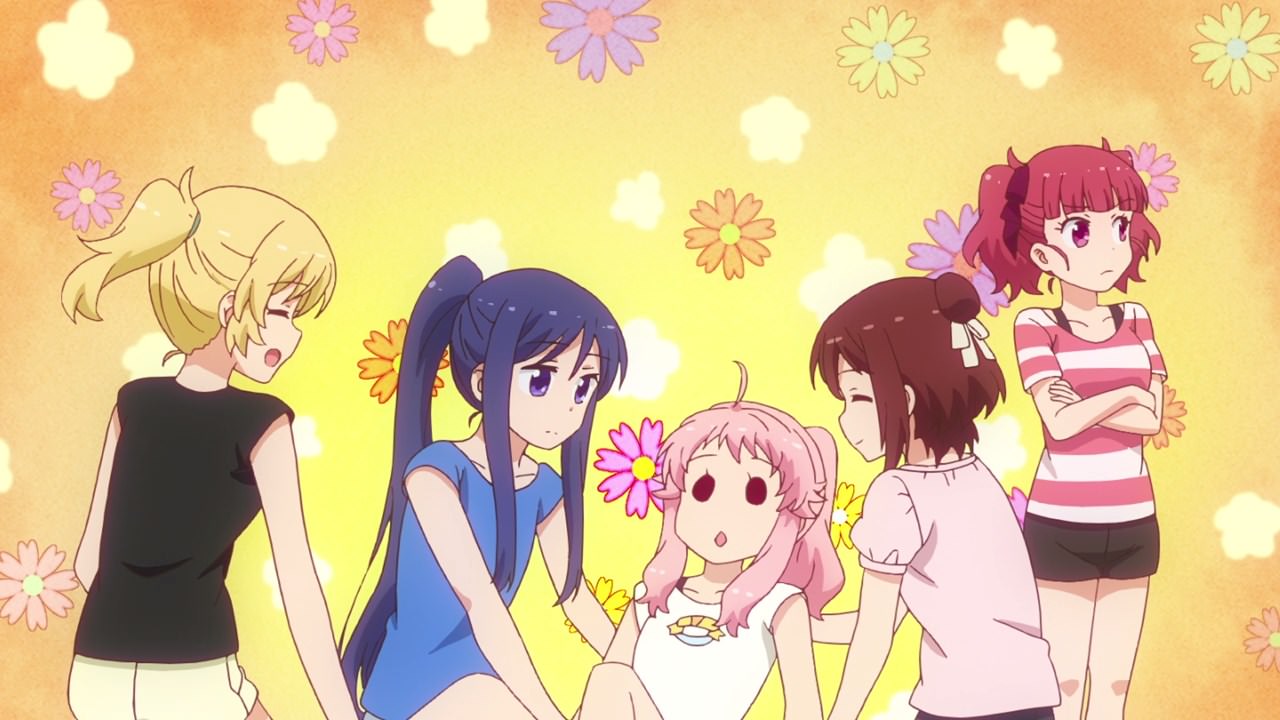 Good thing Hizume Arima and the rest managed to catch them before they fell to the ground and have broken bones.

But seriously, that was a close call for both Uki and Kohane. Let’s hope that they’ll be careful when performing that stunt… 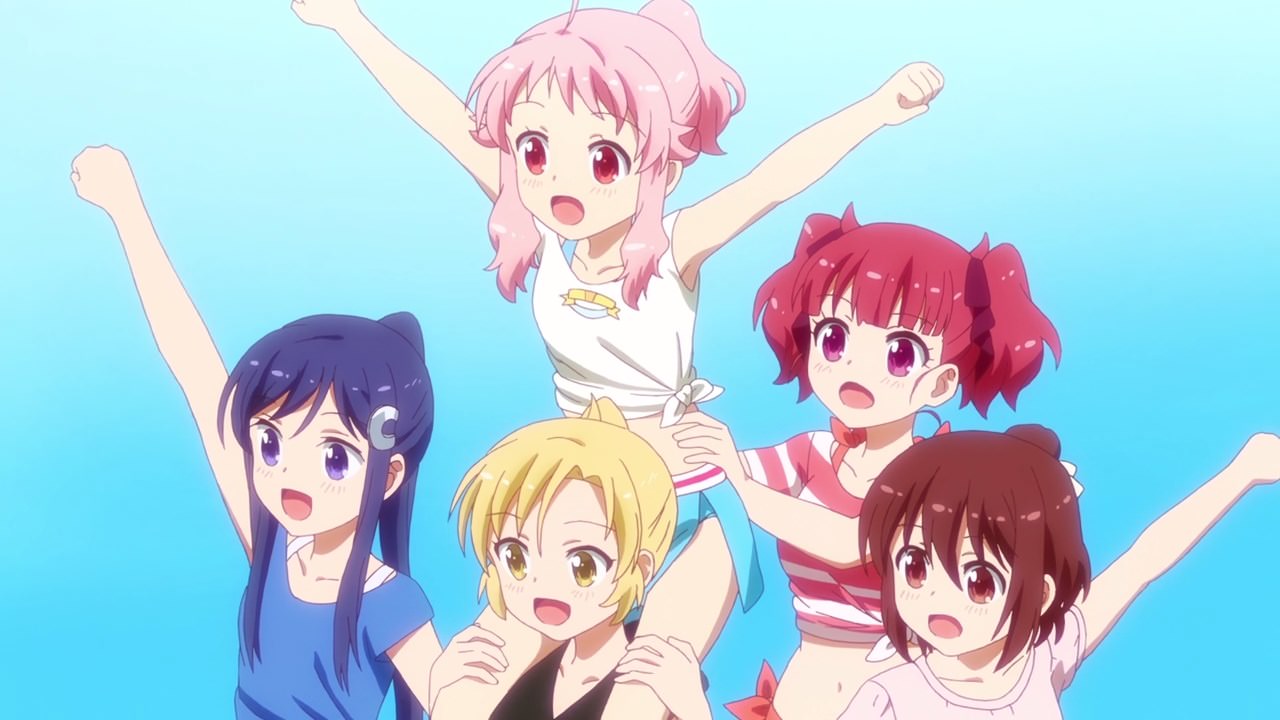 …in time for a local event where Kaminoki High School’s cheerleading club participated as a culmination of her week-long training.

All I can say that they managed to pull it off in the short amount of time. Now then, the trickiest part will be for Kohane to dismount from Uki’s shoulders. 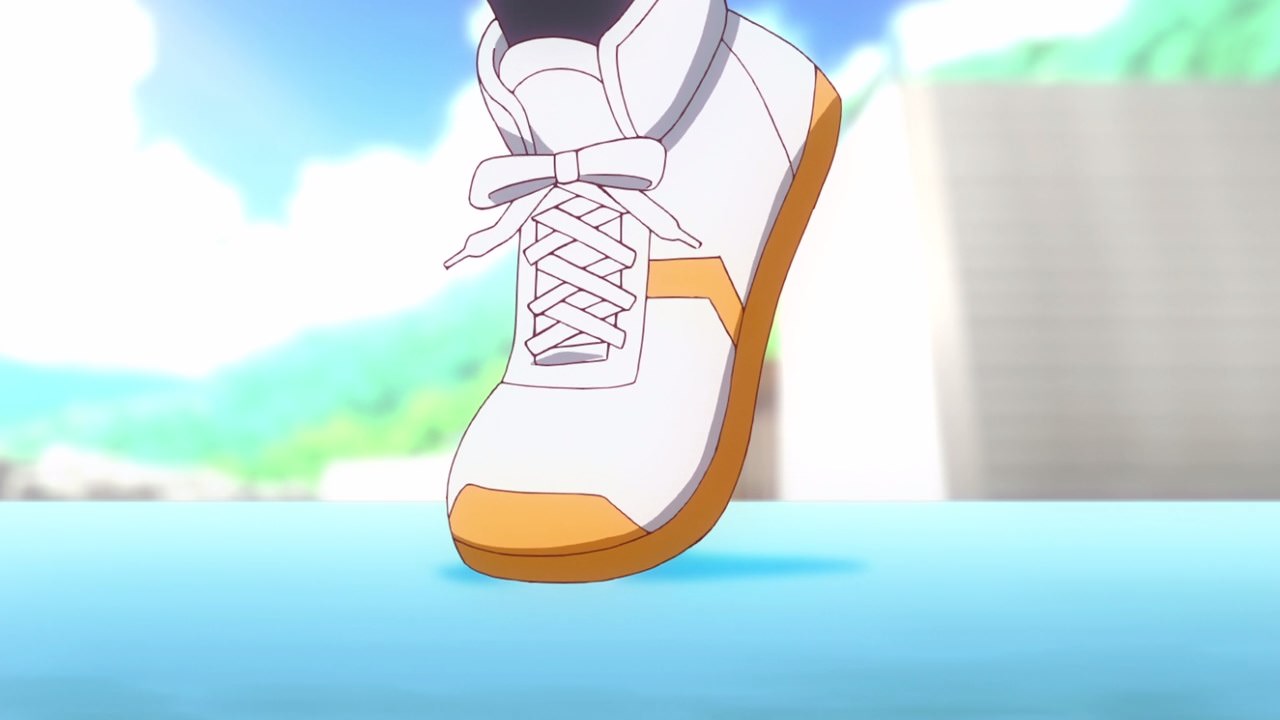 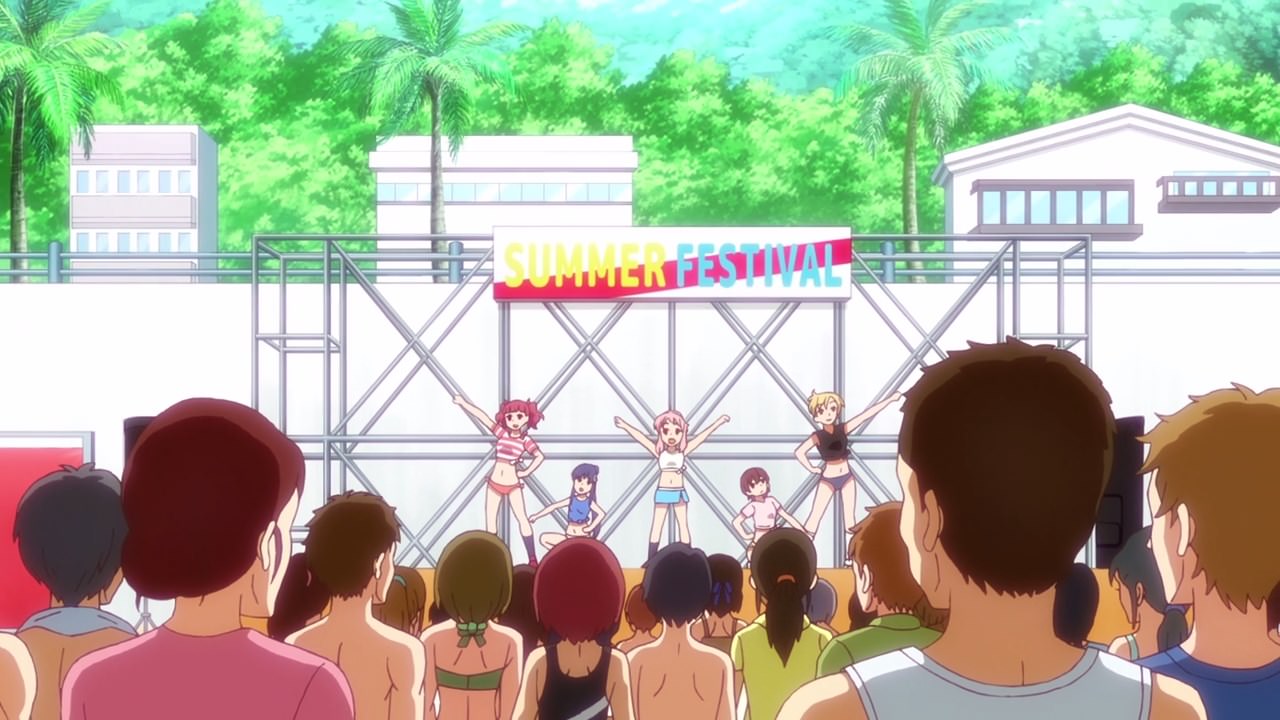 And you know what, she did it too as Kaminoki High School’s cheerleading club performed the stunt well and managed to impress the entire crowd. I guess they’re ready for the upcoming high school cheerleading competition. 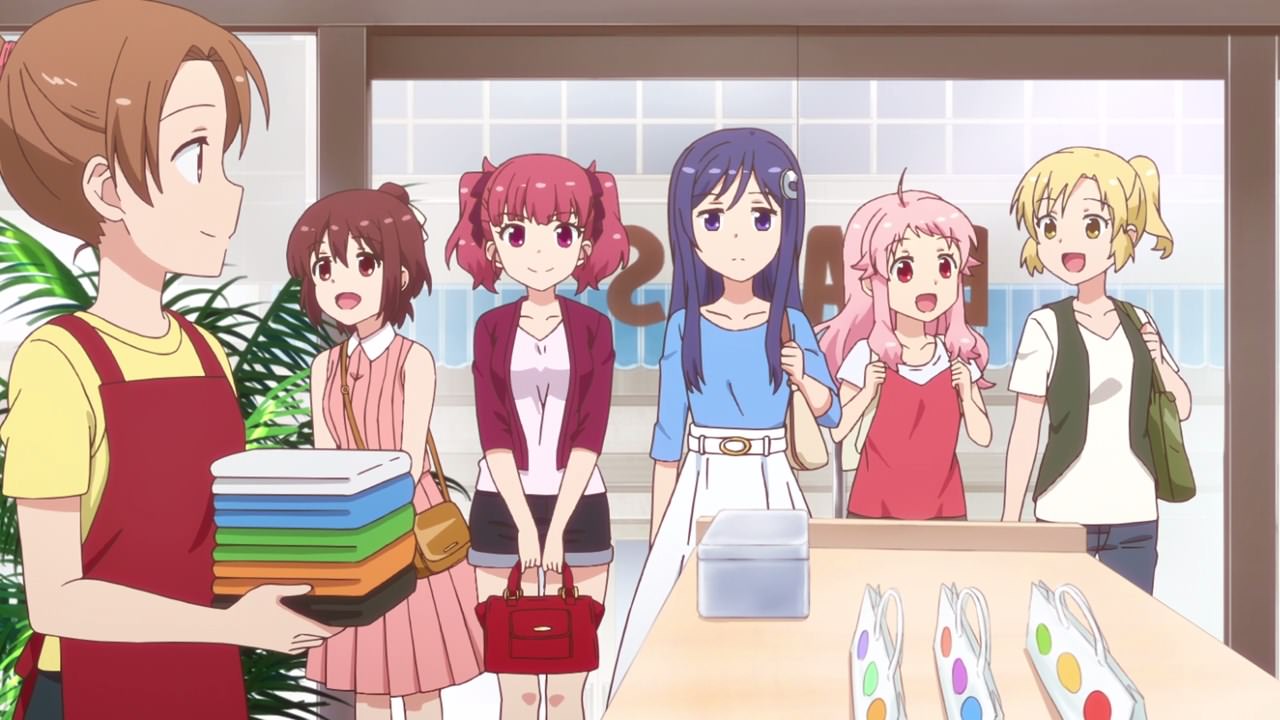 Of course, they need some matching uniform as they went to the cheerleading shop to buy pre-made uniforms or ask them to create one using their original design.

While I wish they could create uniforms by themselves, it seems that the girls have different tastes when it comes to various aspects such as color, what fabric they use, etc. In any case, let’s hope that the store clerk will help them choose the right uniform. 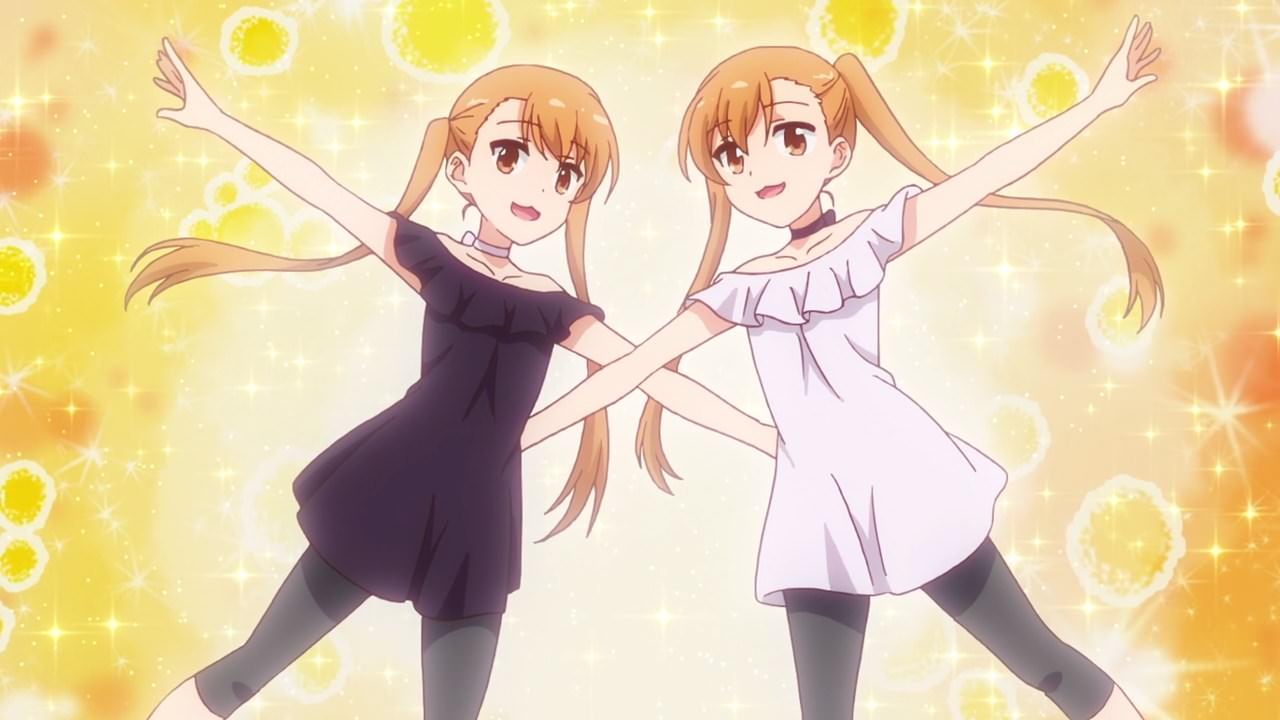 On the other hand, we have new characters introduced named Tamako and Suzuko Nekoya. As you can see, they’re twins and they’re actually Hizume Arima’s former teammates. 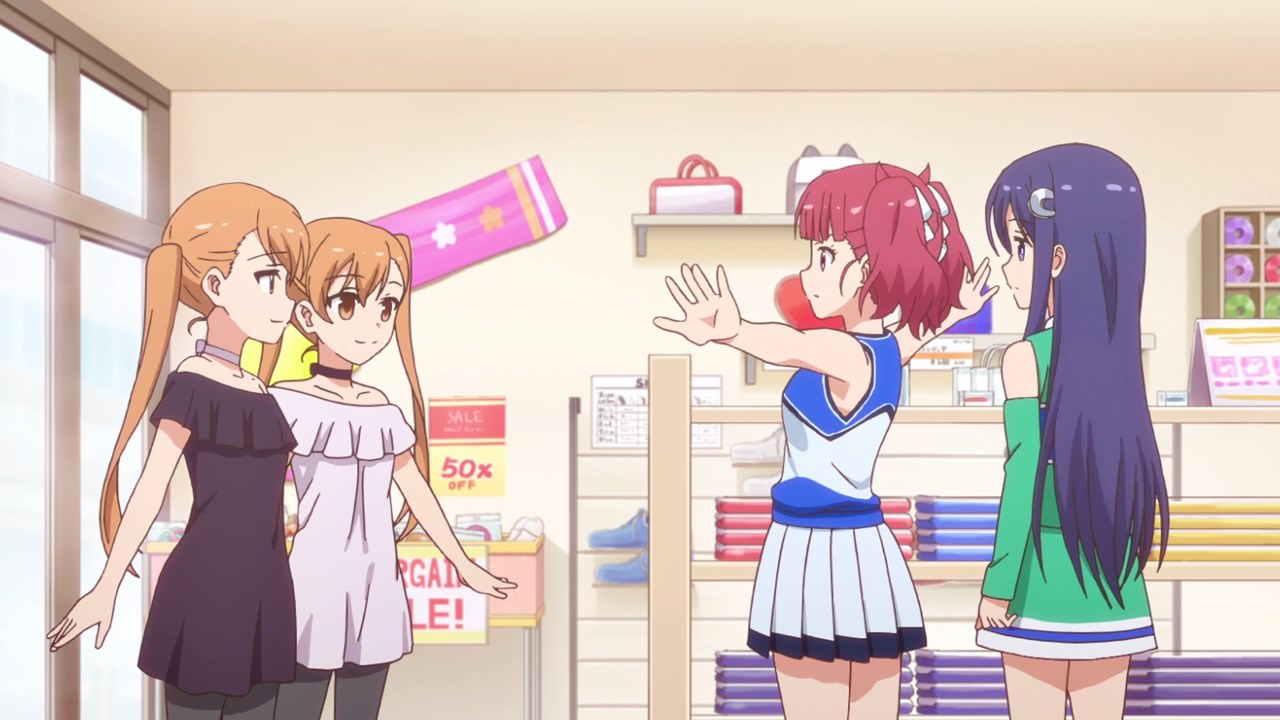 Also, they’re here to rub salt on Arima’s wounds as the Nekoya twins are happy that she didn’t come back to her old team, which gives both Tamako and Suzuko the chance to shine. Seriously, they don’t mince words when saying bad things to Hizume.

Still, Hizume Arima has new teammates which they treat her nicely. Oh, and let’s not forget about Kana Ushiku who will defend Hizume because in her eyes, Hizume-sempai is so amazing! C’mon Ushiku, you love Arima don’t you? 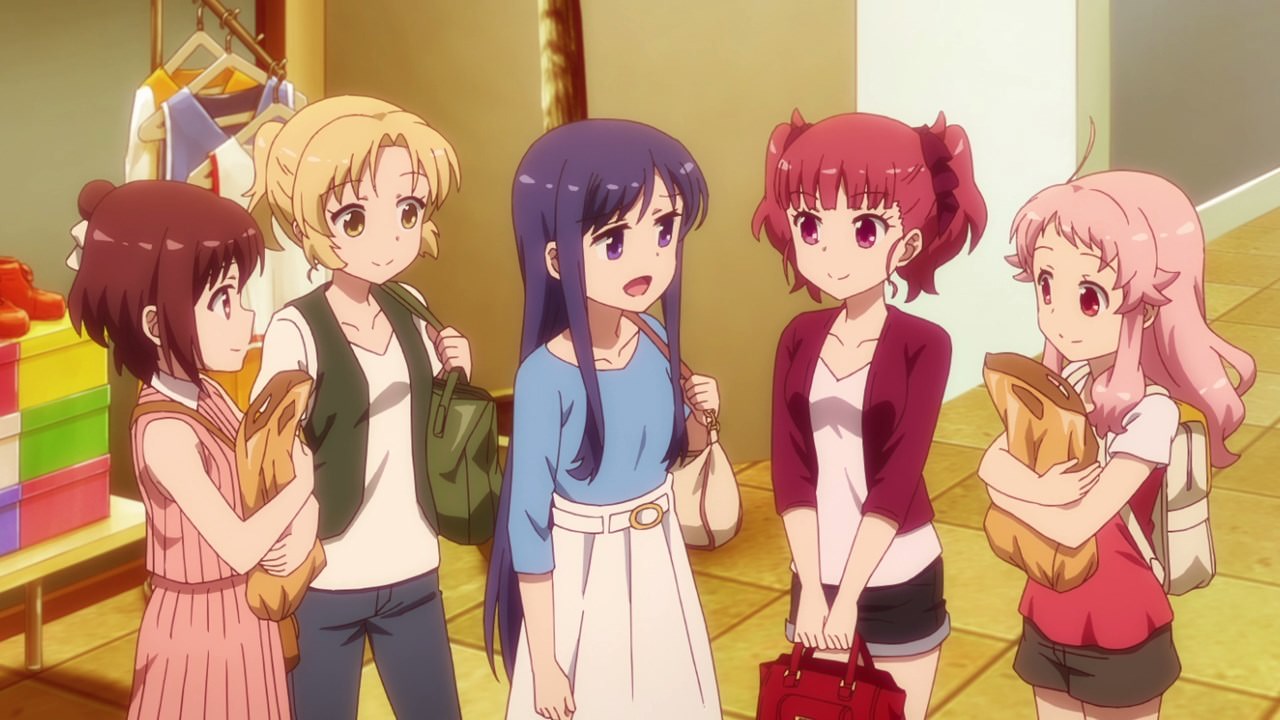 And so, they managed to buy some matching uniforms for the upcoming high school cheerleading competition. Well, they took a long time to choose before settling to a uniform that they can agree on.

But that’s about it for this episode of Anima Yell! Let’s hope that Kaminoki High School’s cheerleading club will show Hizume’s former teammates that they can perform stunts and hype up the entire crowd on the final episode. Oh, and I’m hoping that Kohane Hatoya has enough Cheer Power to do well in the competition!