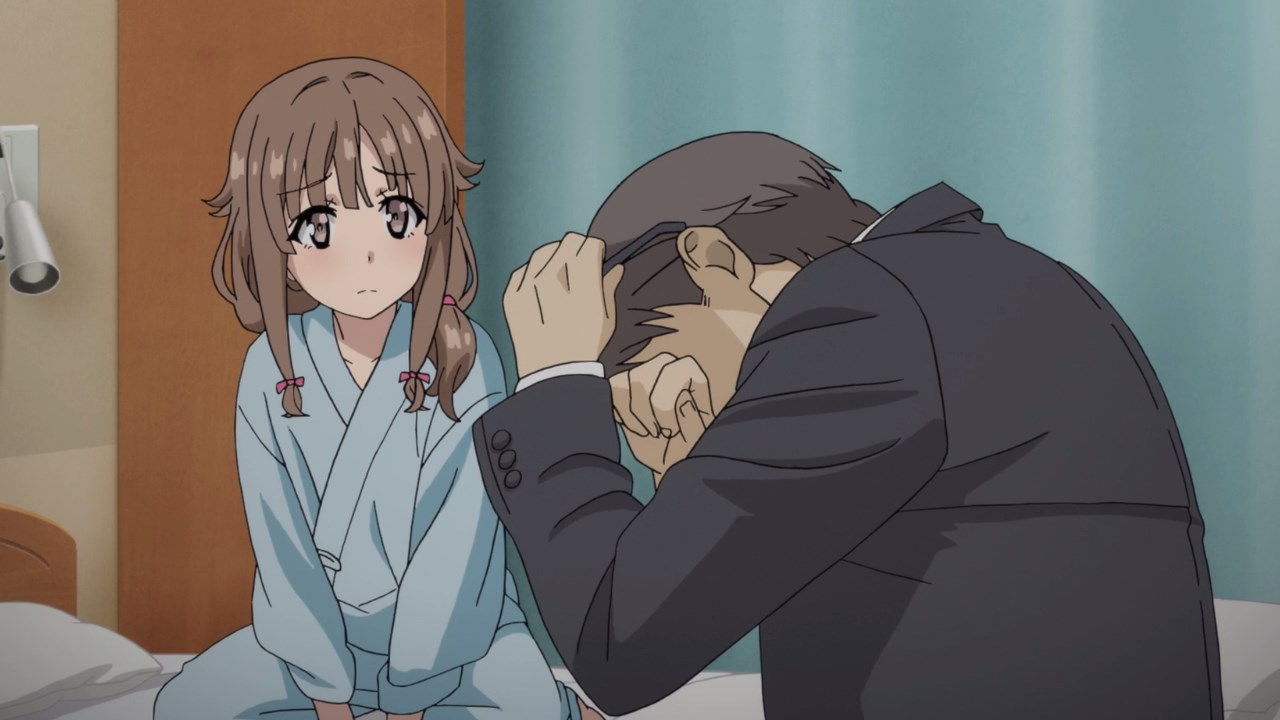 Well everyone, this is the final episode of Seishun Buta Yarou and after 2 years since she got Puberty Syndrome, Kaede Azusagawa’s memories have returned in which her father is very happy about it. 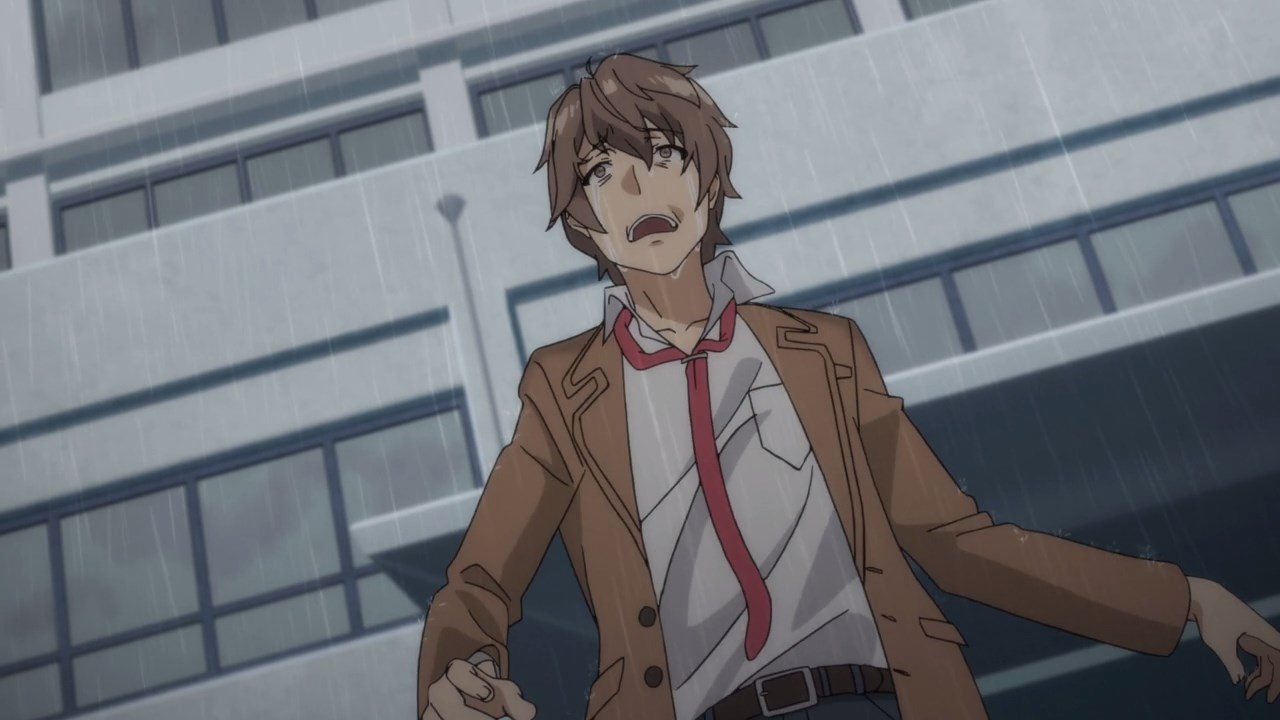 But for Sakuta Azusagawa however, this means that his 2 years that he spent time taking care of his sister went nothing. Her promise to see the pandas again and go to school on the next day? Gone!

Damn, Sakuta is an emotional wreck today as those 2 years were thrown away in a snap. Seriously, this guy needs Mai Sakurajima to hug him but she’s currently on a film shoot in Kanazawa. 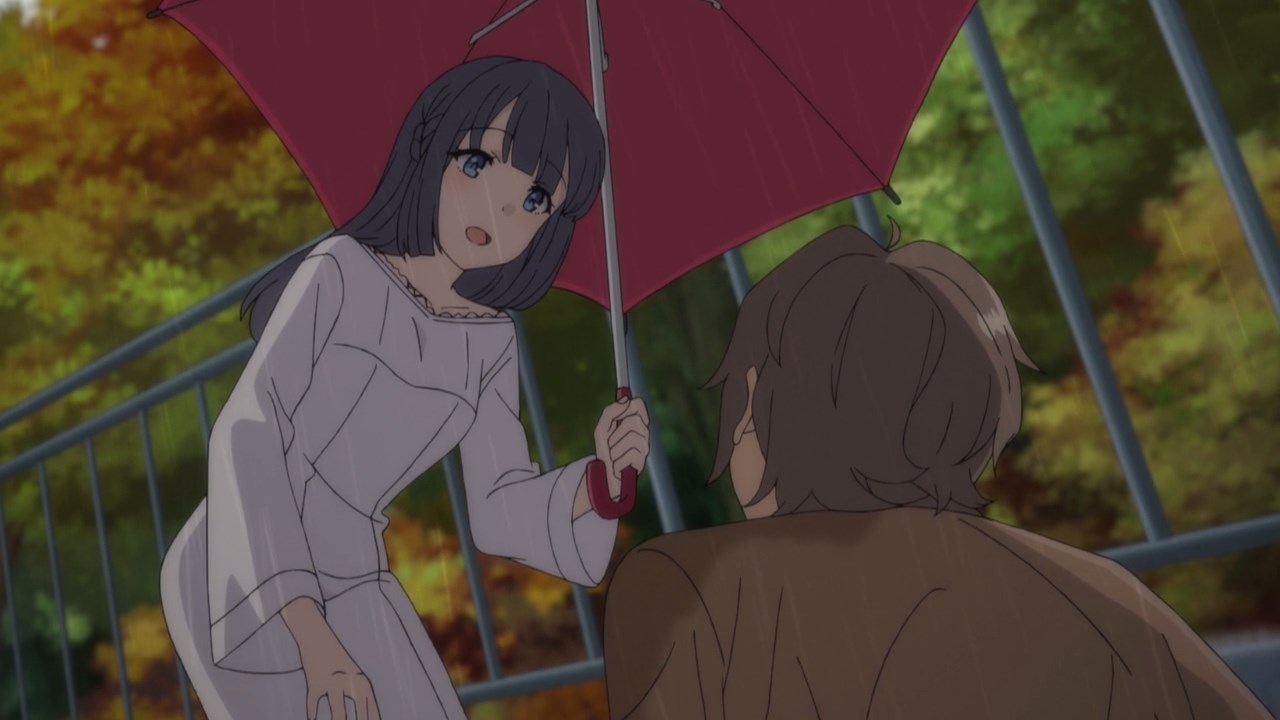 That’s until an unexpected person appeared to help Sakuta out. And man, it’s none other than the older Shoko Makinohara as she’s here to save Sakuta from despair much like 2 years ago. 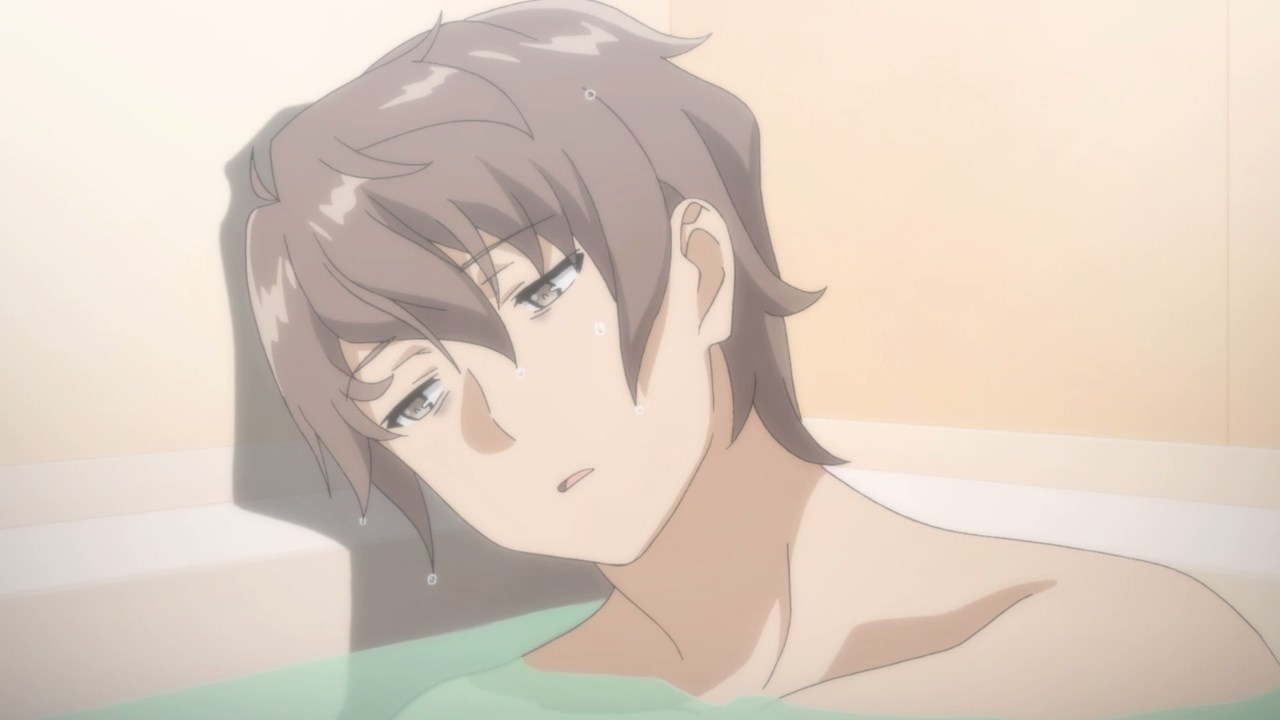 Of course, Shoko-san needs to bring him home and put Sakuta into a hot bathtub, because it’s raining outside and he might catch a cold.

Still, Sakuta is such an emotional wreck that he dazed and confused at this point. 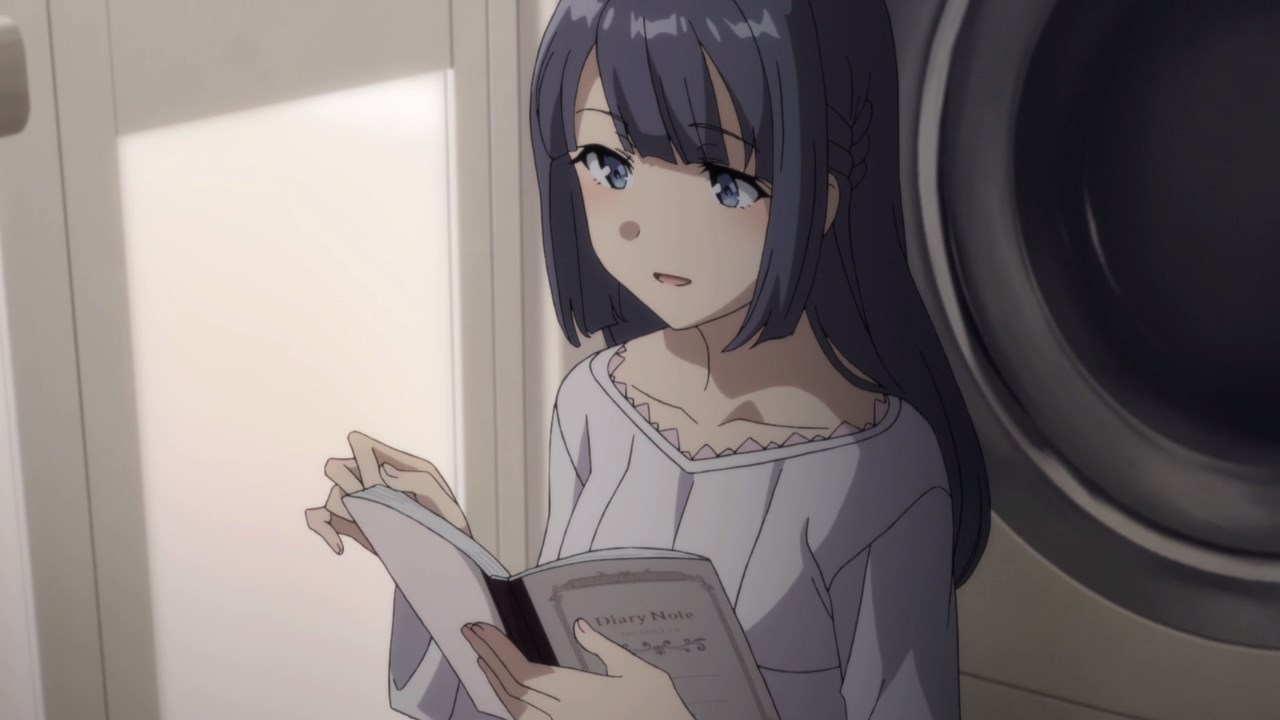 But that’s until Shoko-san read Kaede’s diary in which she told about how Kaede wants to create happy memories before her inevitable recovery.

In other words, Shoko Makinohara wants to tell Sakuta Azusagawa that he needs to accept everything, including her decision to reclaim her previous memories. But you know what, if she loses her current memories, Sakuta will remind Kaede about it since he’s a big brother to her. 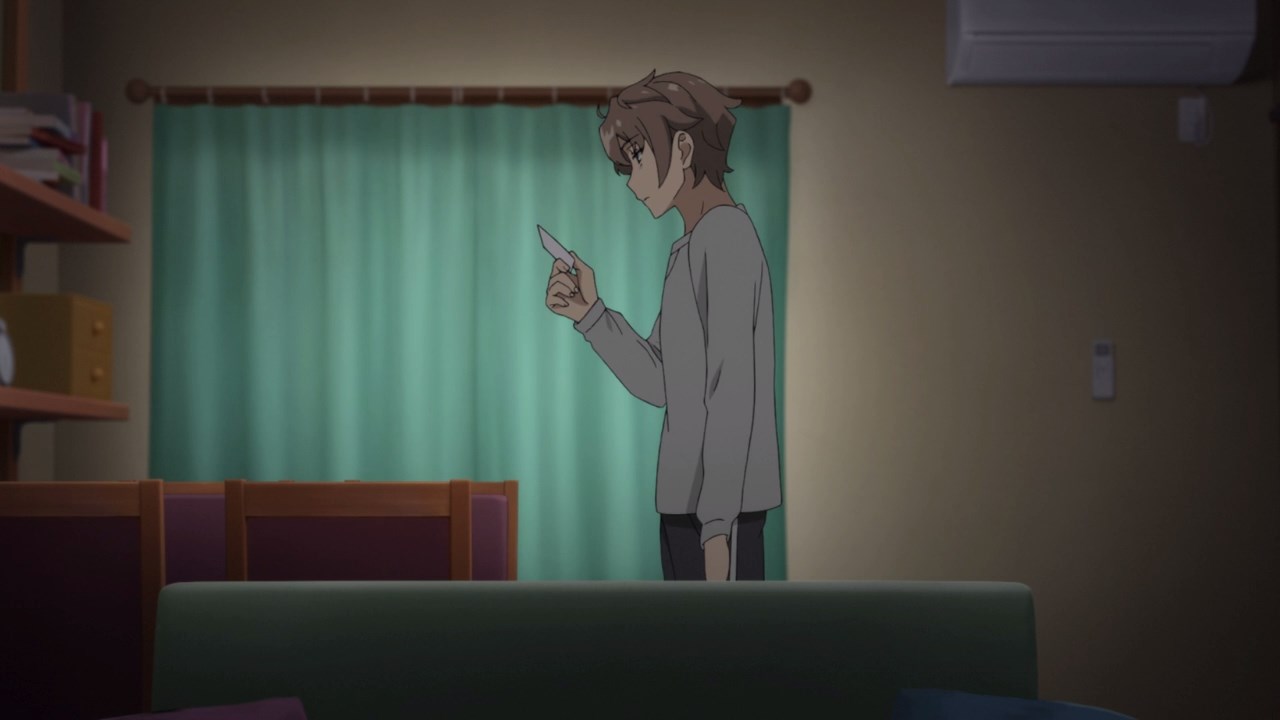 The next day, Shoko Makinohara is gone where she left a parting letter to Sakuta Azusagawa, which he didn’t manage to have a short chat with her since Sakuta woke up from his deep slumber.

And really, it’s sucks that Shoko didn’t explain why she disappeared a few years ago after Sakuta attended Minegahara High School. More importantly, there’s another question of whether the older Shoko was just a figment of Sakuta’s imagination. 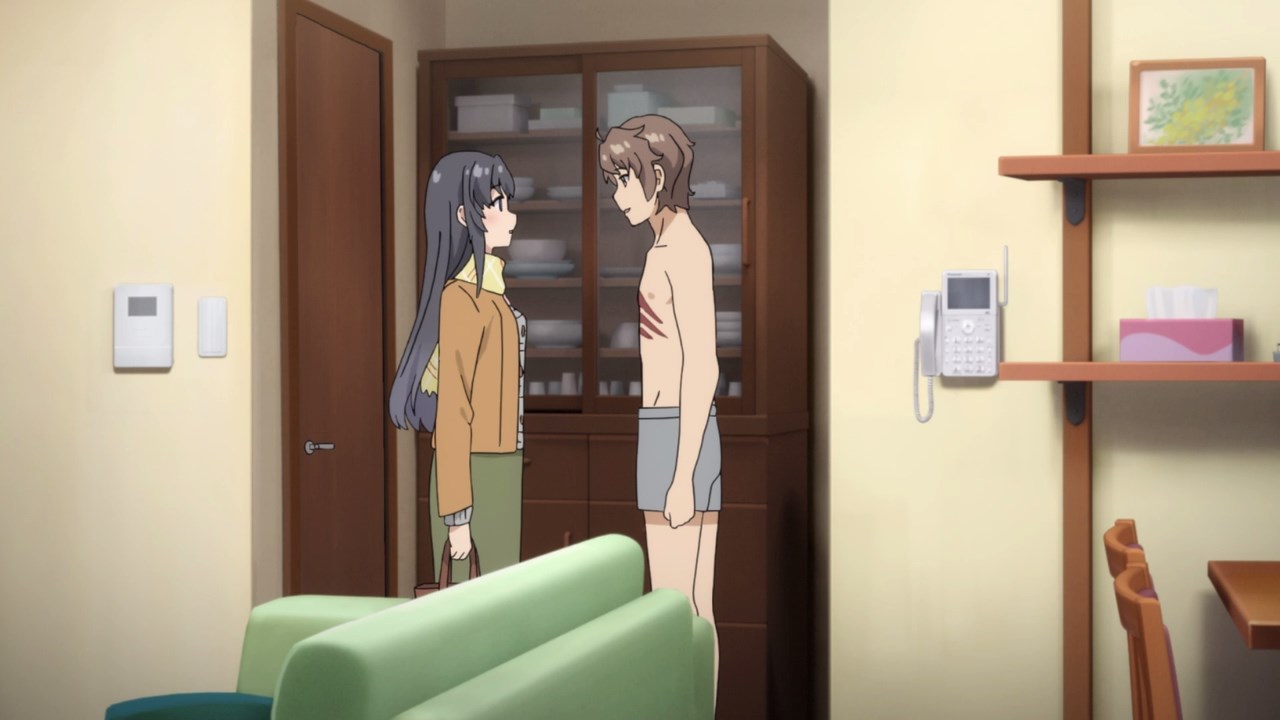 Now then, let’s move onto the next scene where Mai Sakurajima paid a short visit at the Azusagawa residence.

C’mon, she missed Sakuta very much and let’s not forget that Mai-sempai is also worried about Kaede-chan. 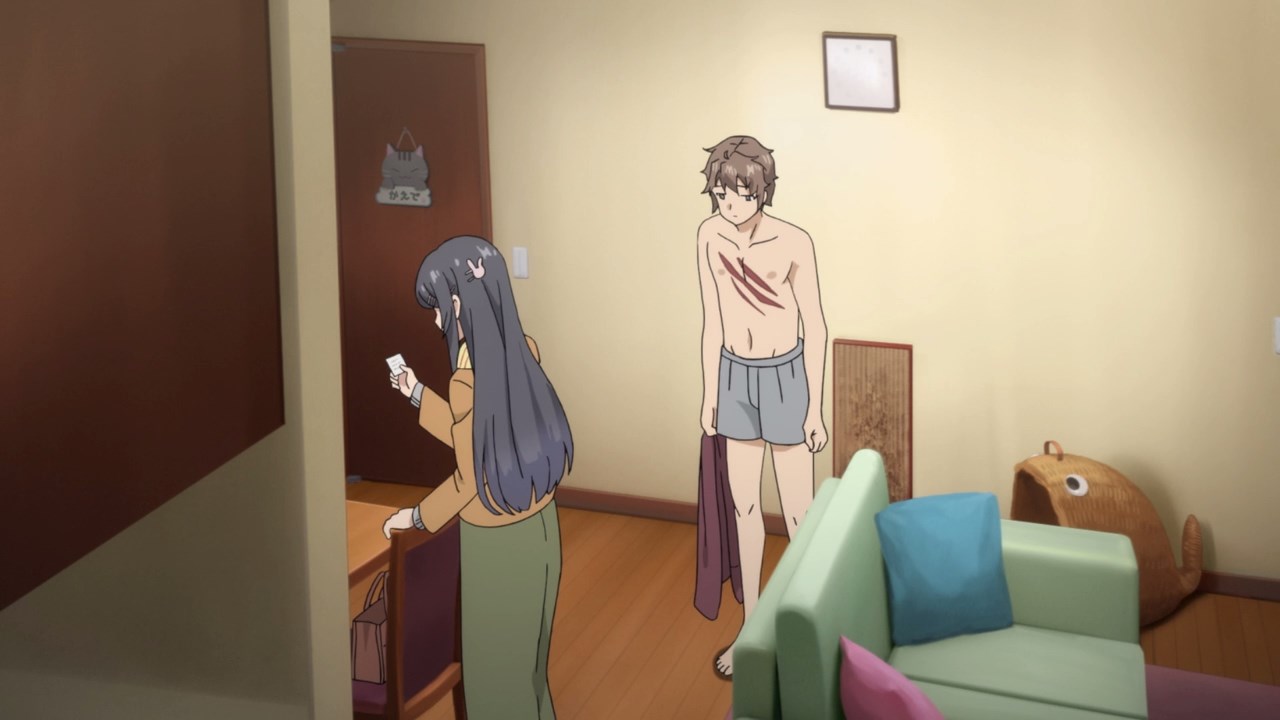 However, it seems that her visit is unnecessary once she got a hold of Shoko’s parting letter.

Well Sakuta, you should have hide that letter somewhere. Also, put some clothes on will ya? 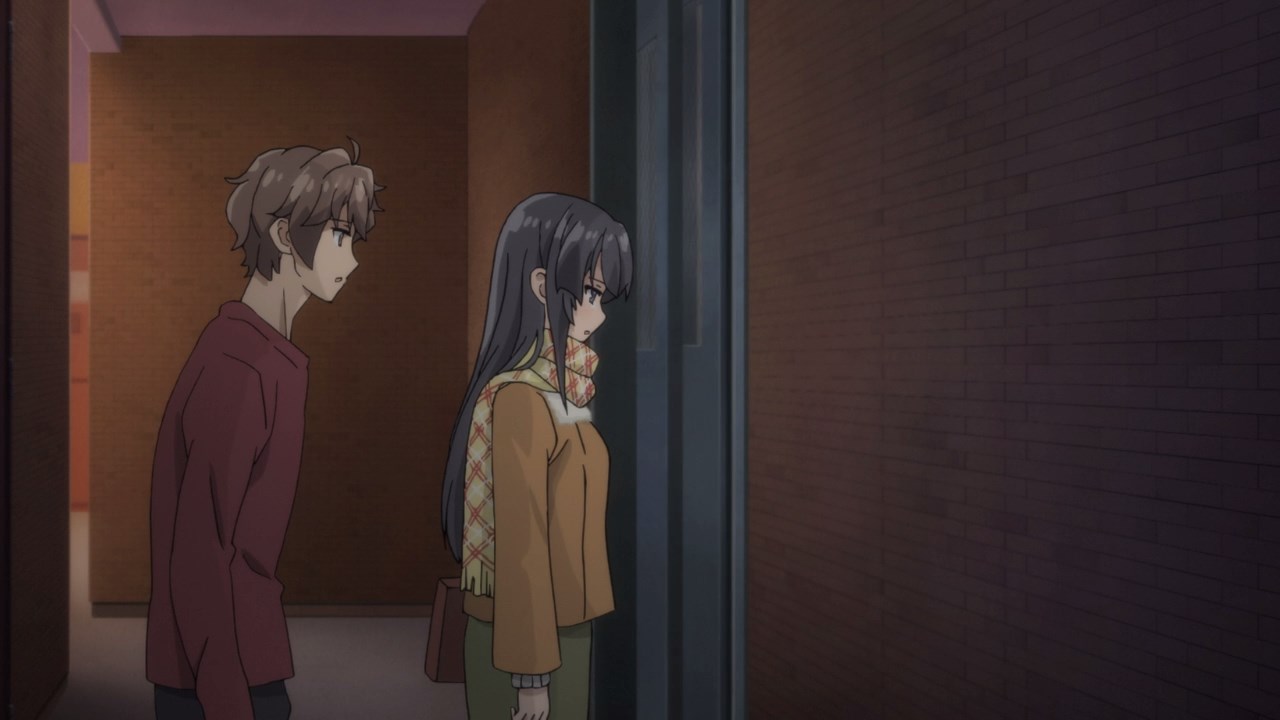 But by the time Sakuta Azusagawa wore his shirt, Mai Sakurajima is about to take her leave as she felt that there’s no need for her to help Sakuta and Kaede.

C’mon Mai-sempai, Sakuta wants you and it doesn’t matter when you arrive at his place as long as he still loves you dearly! Then again, Mai continues to go down the elevator and return to the film shoot. 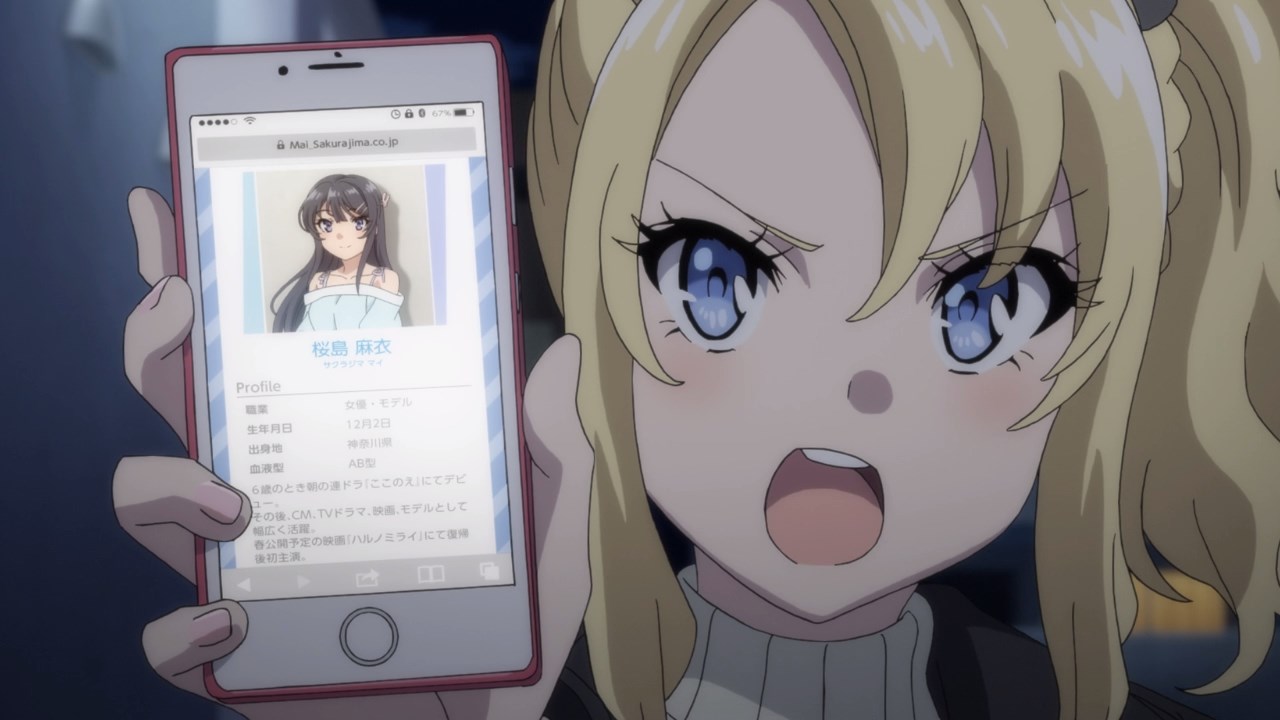 But on December 2 however, Nodoka Toyohama told Sakuta Azusagawa to see her half-sister since she’s celebrating her birthday.

As her boyfriend, Sakuta will have to make Mai-sempai happy. Otherwise, she might dump him. 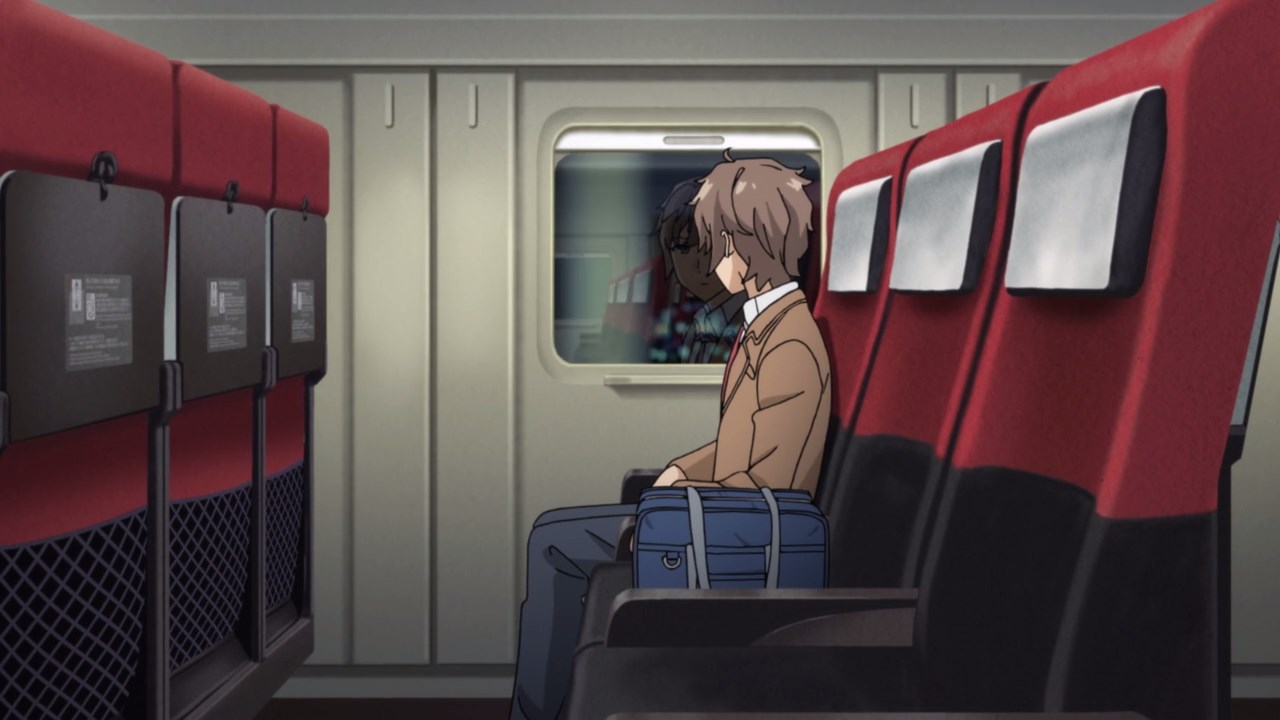 Anyways, Sakuta board a train towards Omiya in Saitama Prefecture. Man, I hope he makes it there because Mai-sempai will be very lonely without him. 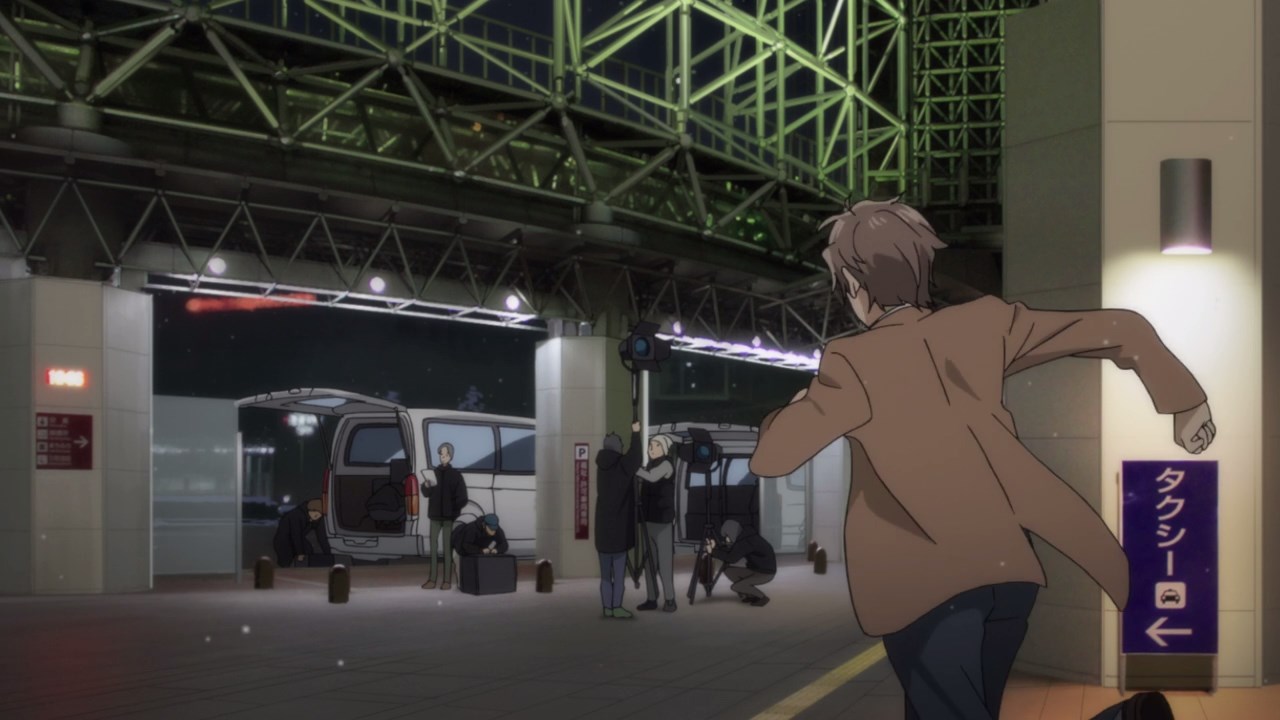 Now then, Sakuta arrives in Omiya but it seems that he’s already too late as the film crew are about to depart for their next shoot. 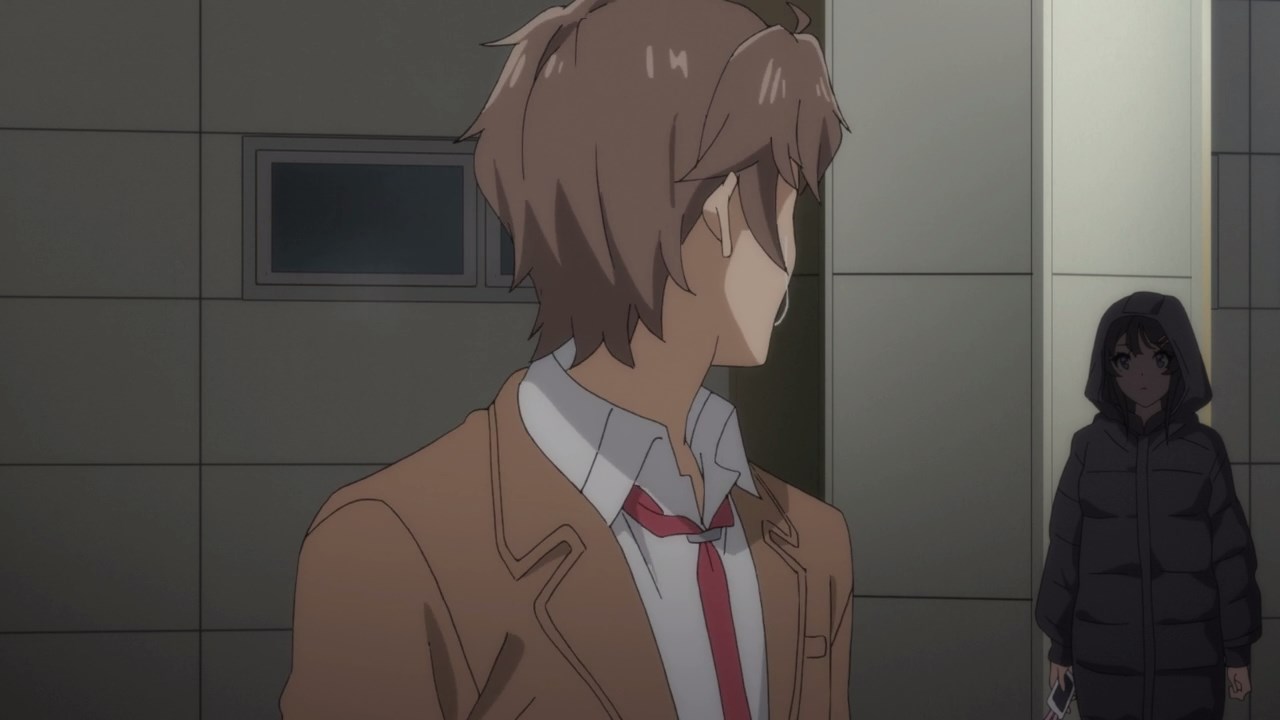 That’s until Mai Sakurajima appeared in a black hoodie and called him out as she’s waiting for him. Well, looks like Sakuta won’t have to go home empty-handed anymore. 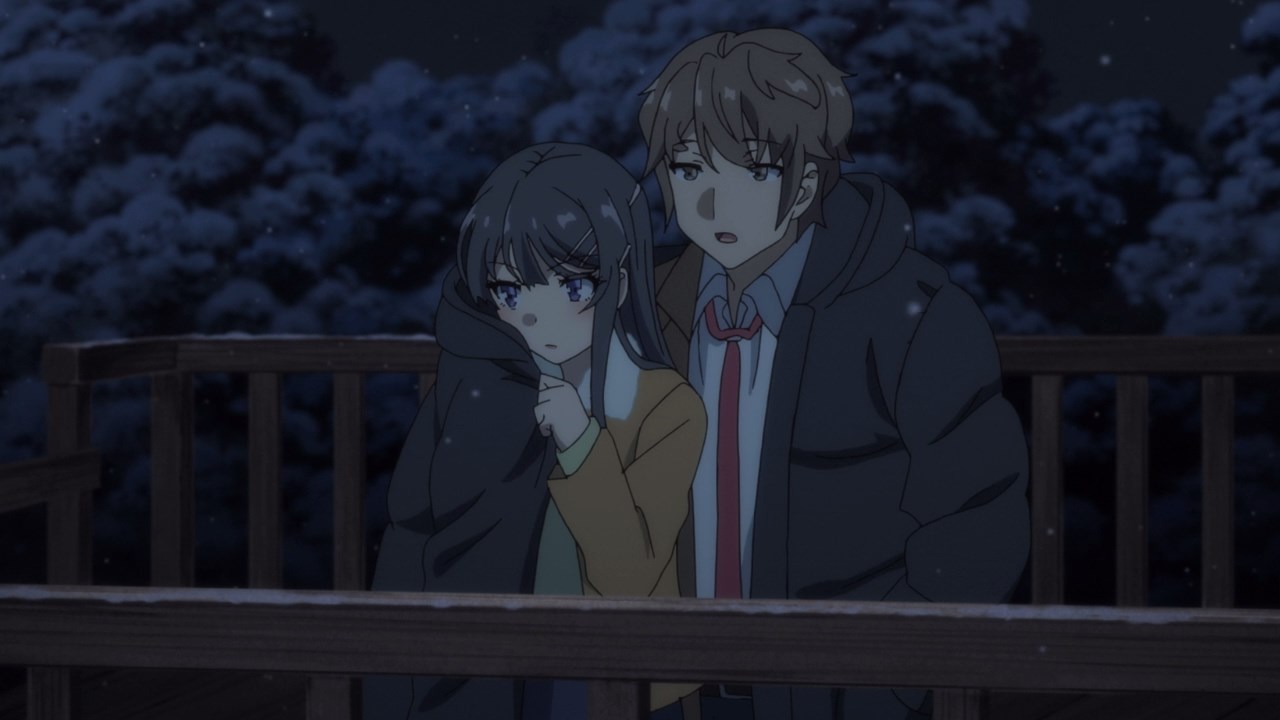 Anyways, it’s time for them to spend their lovey-dovey time by themselves… for a short time since her birthday is gonna end soon and Mai-sempai will have to finish the film shoot on time.

Still, it’s nice that both Sakuta and Mai are reaffirming their relationship as they apologize to each other over their slight misunderstanding when Shoko Makinohara paid a short visit. Again, it’s reassuring that they’re still together at the end of the day. 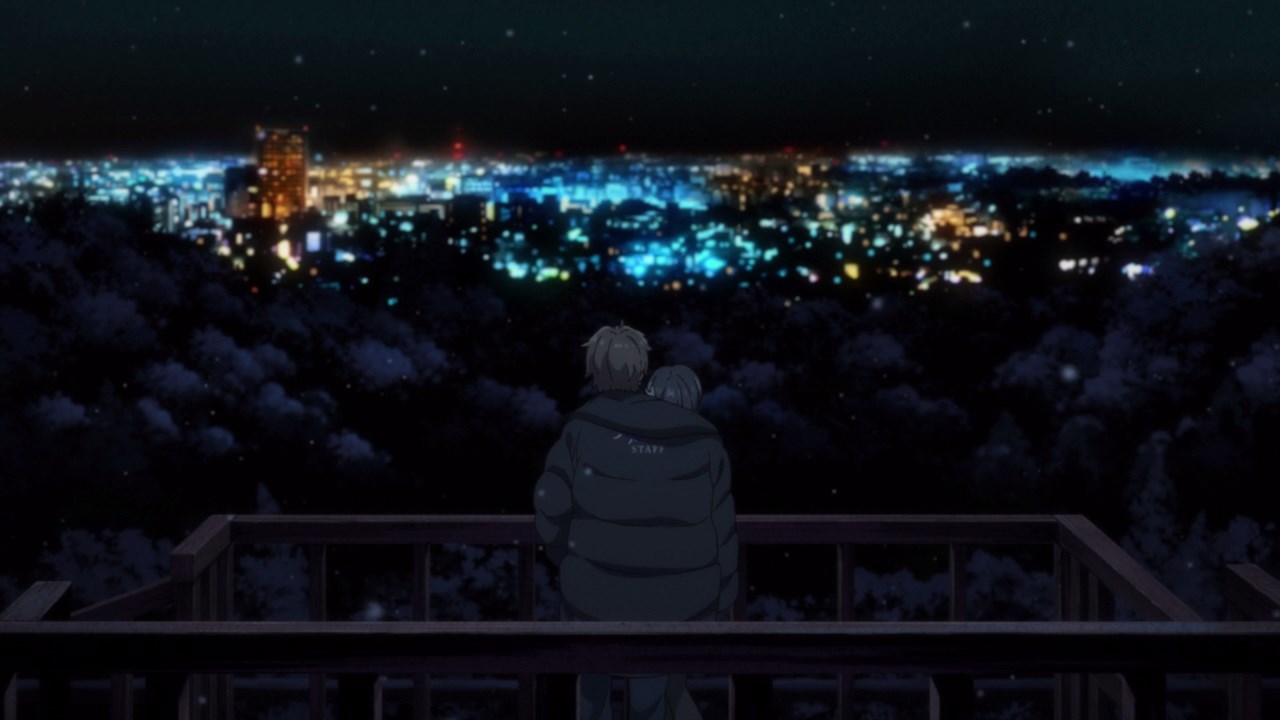 And that’s about it for Kaede Azusagawa’s story arc, thus signifies the end of Seishun Buta Yarou TV series.

Now for the story arc itself, I like how Kaede wants to take the initiative on moving away from her trauma by taking small steps of returning to the outside world. Then again, it went nothing when Kaede’s Puberty Syndrome went magically disappeared, thus reverting to her previous memories and all of her 2 years of being a docile young sister got thrown away. Fortunately, Kaede kept a diary at hand in which Sakuta will tell her what happened to those 2 years that she missed, and let’s hope that he invites his sister to visit the zoo and see those pandas again.

As for the entire series, CloverWorks did a good job on adapting Hajime Kamoshida’s light novel series, quite a step-up from their previous works such as Slow Start. Sure that there are some imperfections and it seems that it reminds me of the Monogatari series, but overall this show is quite good from beginning to end. I give props to them for making Seishun Buta Yarou into a fine anime series to watch because it deals with personal anxieties that affects them and around it. 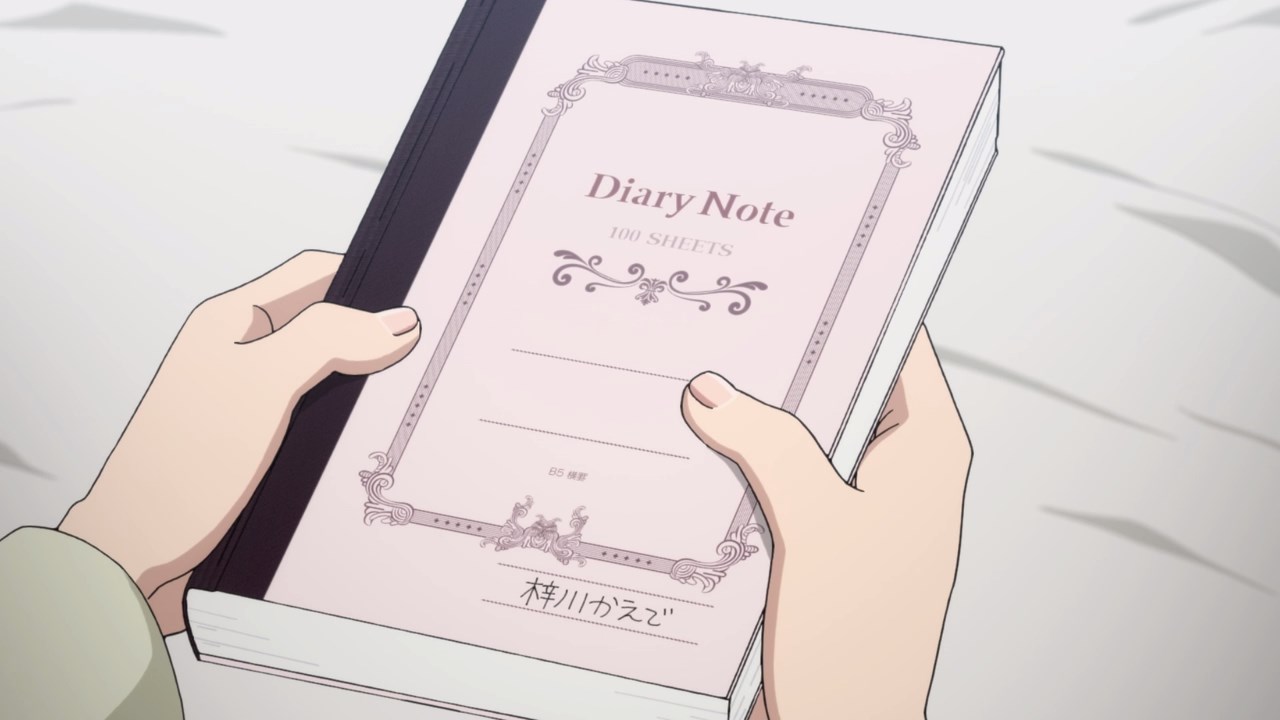 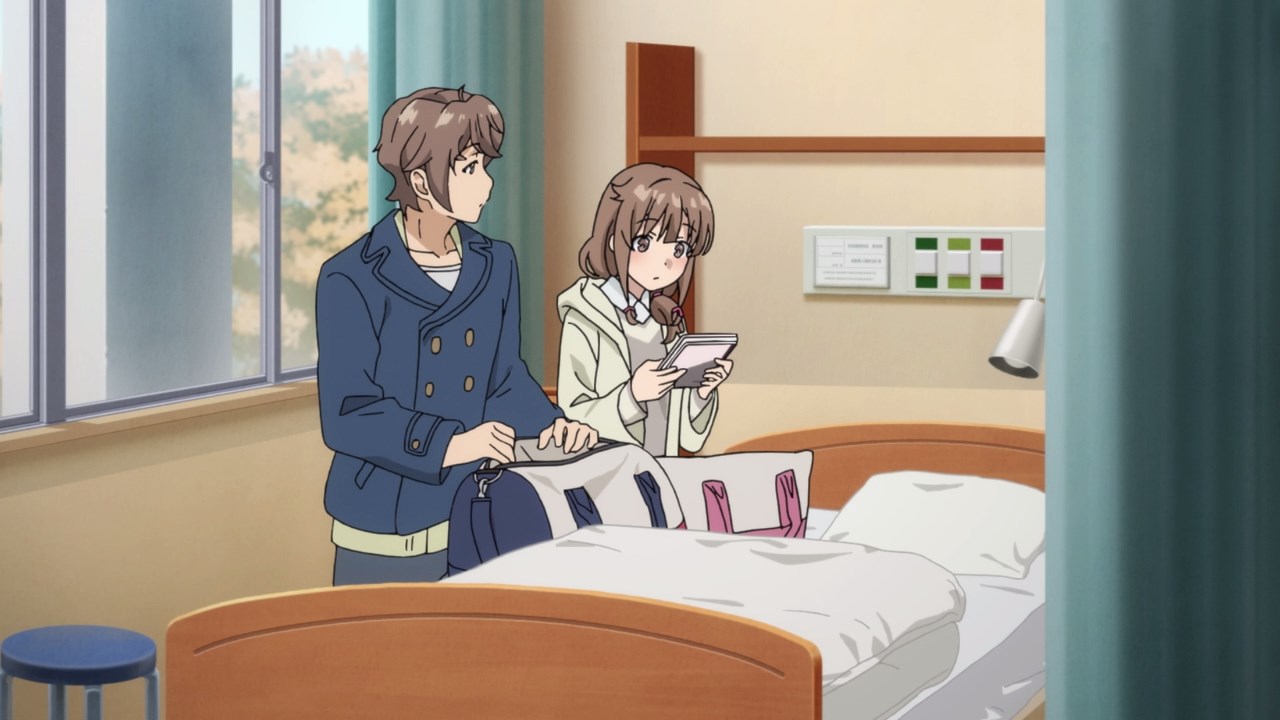 And now for some epilogue as Kaede Azusagawa is about to return home. Still, she has a long way to go to remember those 2 years as a docile sister to Sakuta. In any case, the future looks bright for Kaede-chan as she might return to society and see Kotomi Kano again after being ostracized by bullies.

One last thing, it appears that the story might not be over as there’s a movie coming up where it’ll feature Shoko Makinohara and her whereabouts. I’m looking forward for that in the future!