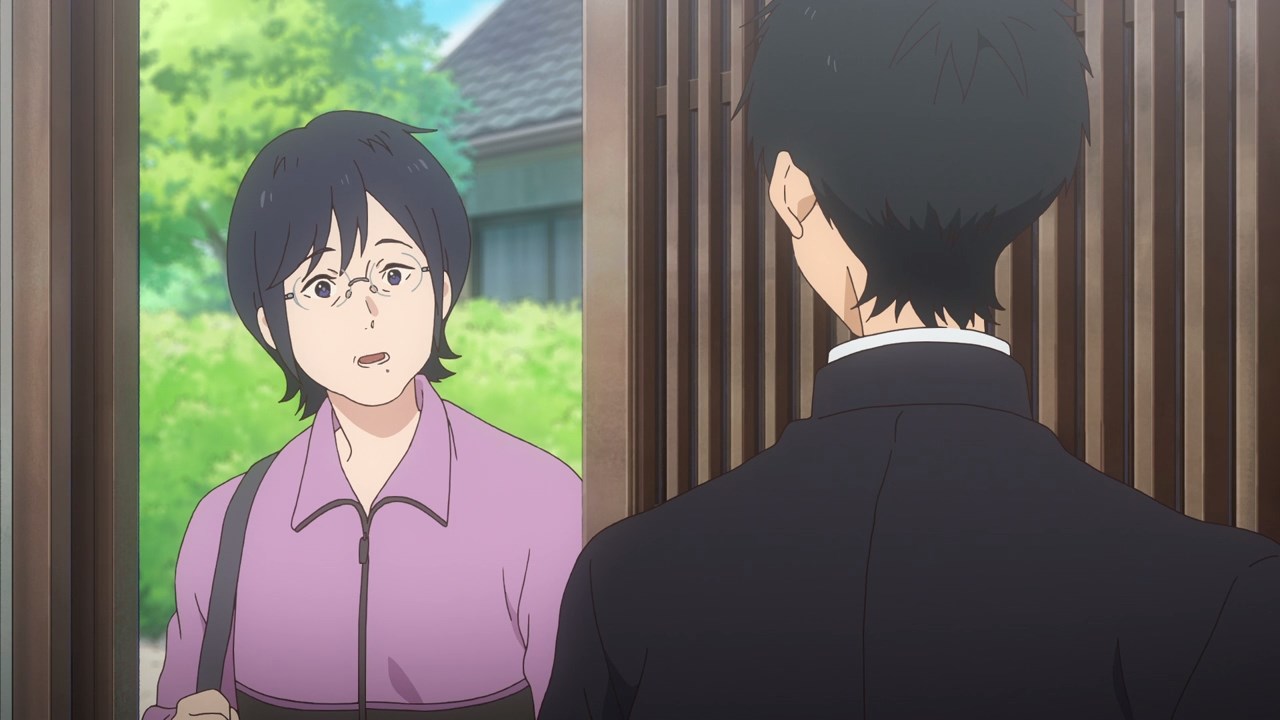 Well then, seems that after Seiya Takehaya walked out in the rain, he got a fever in which his mother told Minato Narumiya that her son won’t go to school today.

Gotta say that he should have an umbrella at hand but I guess Seiya is in a foul mood lately that he didn’t bring out his umbrella at that time. 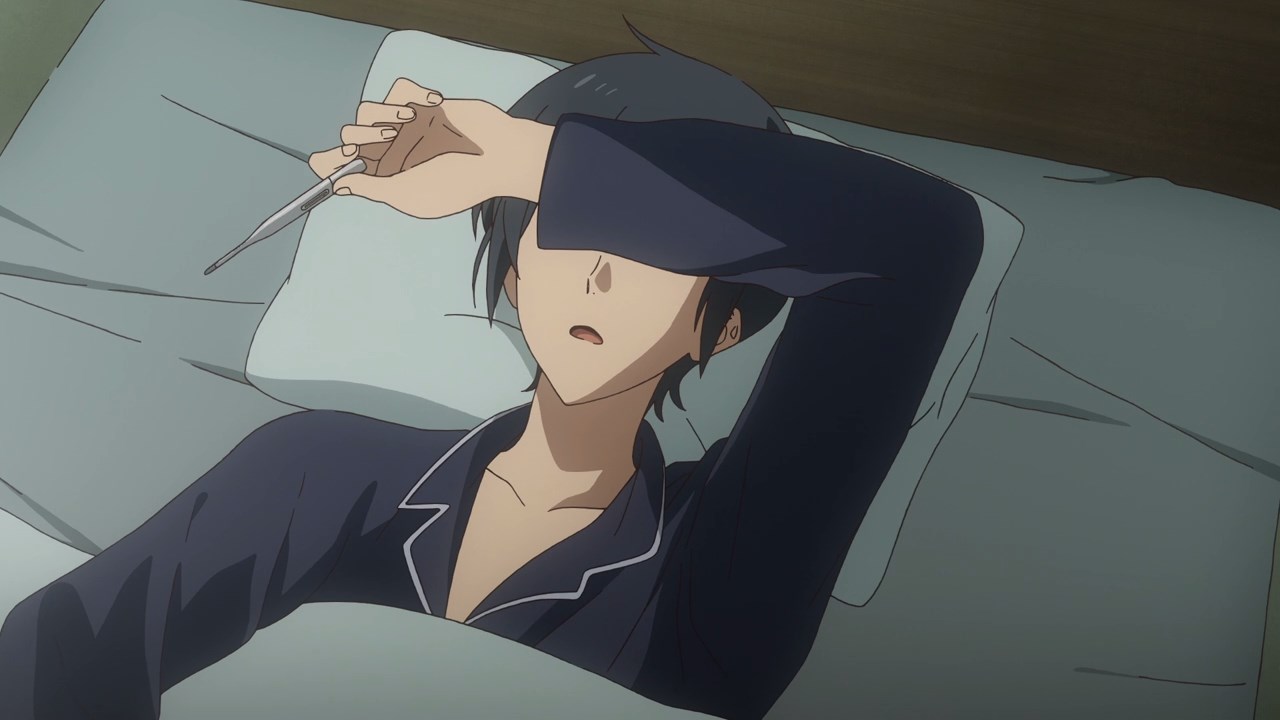 In any case, here’s Seiya Takehaya as he’ll be staying in bed for a while until his fever went away.

But you know what, I think this would be the time for Seiya to calm down and reassess himself, from his commitment in kyudo to his friend. 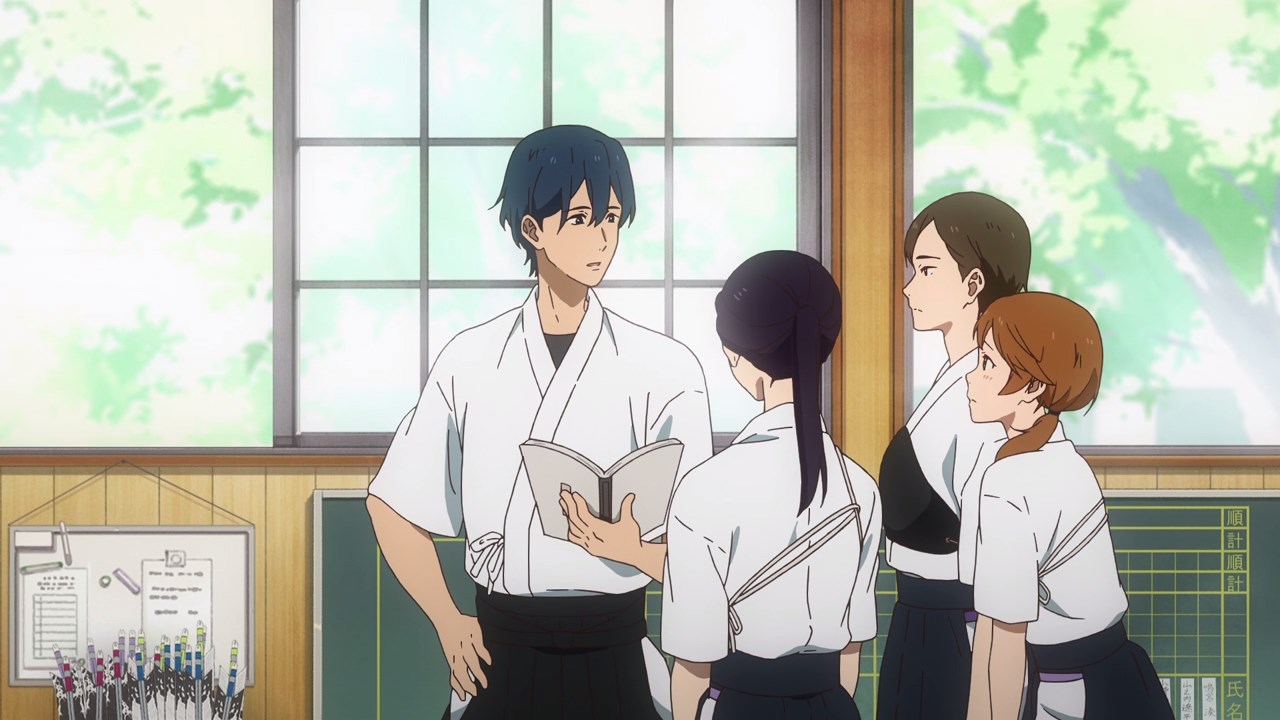 But because of Seiya’s absence, seems that the boys are bickering once again as Rika Seo and the rest of the girls told Masaki Takigawa about it. 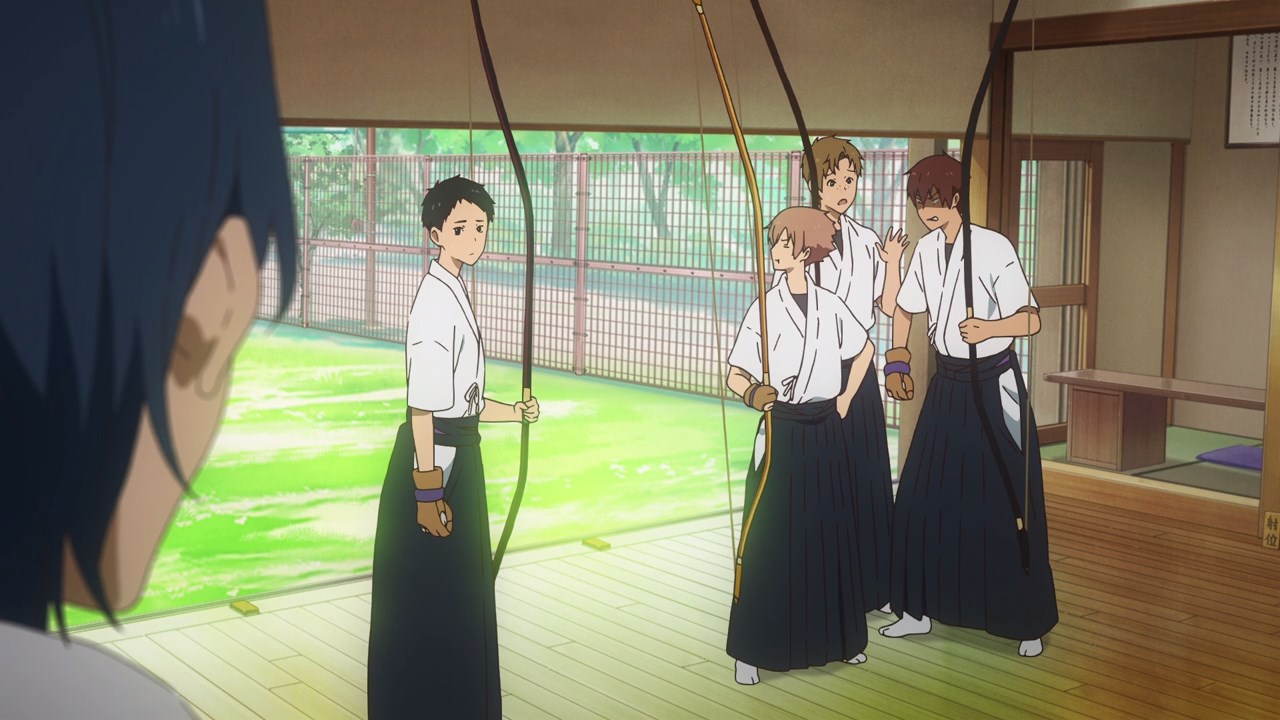 See? They’re fighting among themselves without Seiya stopping them. Even Minato Narumiya couldn’t do anything about it. 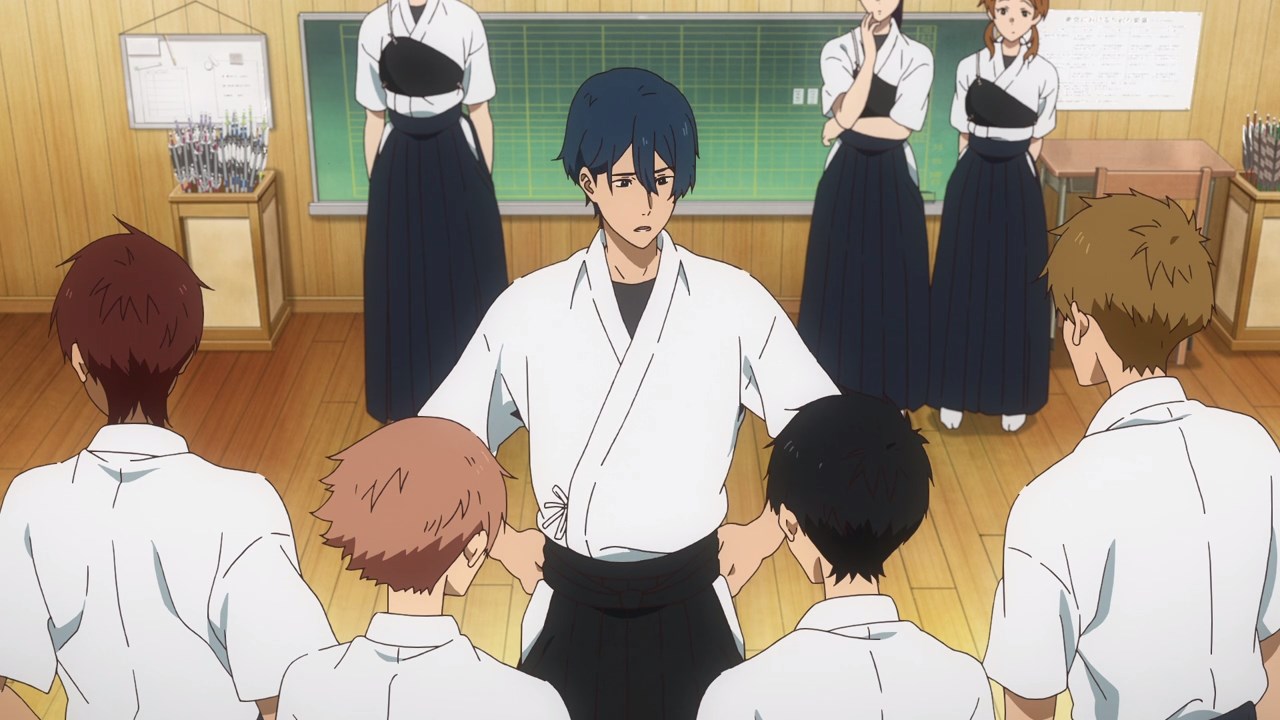 With that said, looks like it’s time for Masaki Takigawa to act like a proper coach for once and told them not to fight each other ’cause it’ll be bad for them to bicker around during the nationals.

Well, at least a light scolding will teach them a lesson but at the end of the day, Masa-san is not the perfect coach. 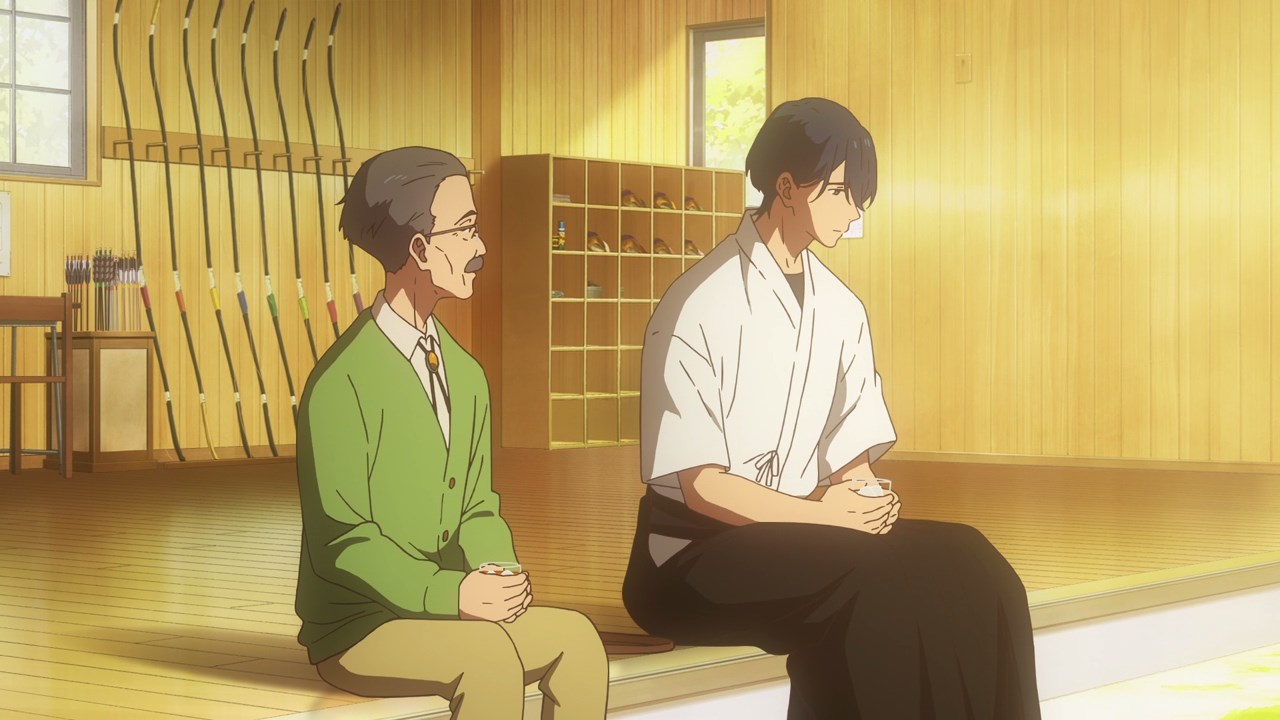 Heck, he even laments his limitations and faults when Masaki Takigawa talks to Tomio Morioka about his time when his grandfather asked him if he loved archery or not.

Of course, he felt so pressured of answering it other than “Yes” back then but honestly, Masa-san wants to love kyudo in his own way. Still, I feel that if he wants everyone to love archery, Takigawa needs a lot of convincing and understanding to have his students love the sport, especially Takehaya. 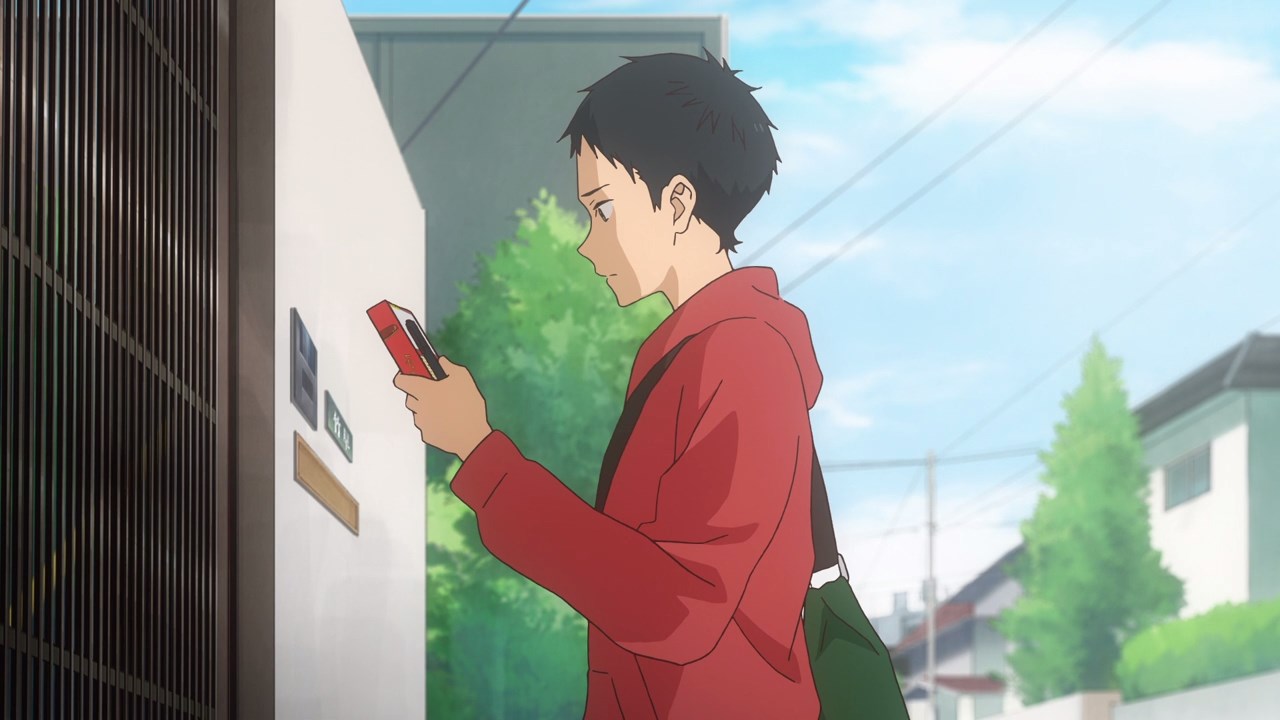 Now then, it’s time for Minato Narumiya to visit the shrine together with his club-mates. But first, he paid a visit to Seiya Takehaya’s house…

…where Minato brought something special to his friend. That’s right, Seiya’s favorite chocolate snack and I’m sure that he’ll love it! 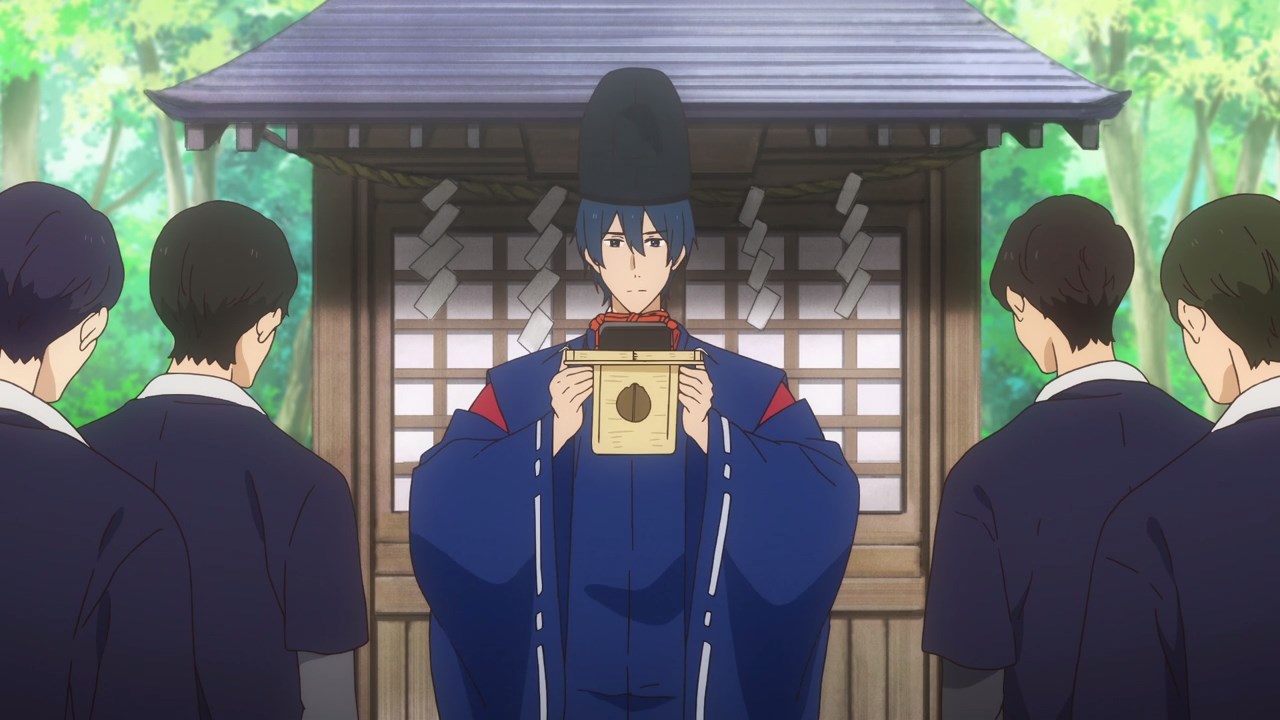 Anyways, it’s time for the ritual to begin as Masaki Takigawa presides it as a priest. I must say that he looks so divine! 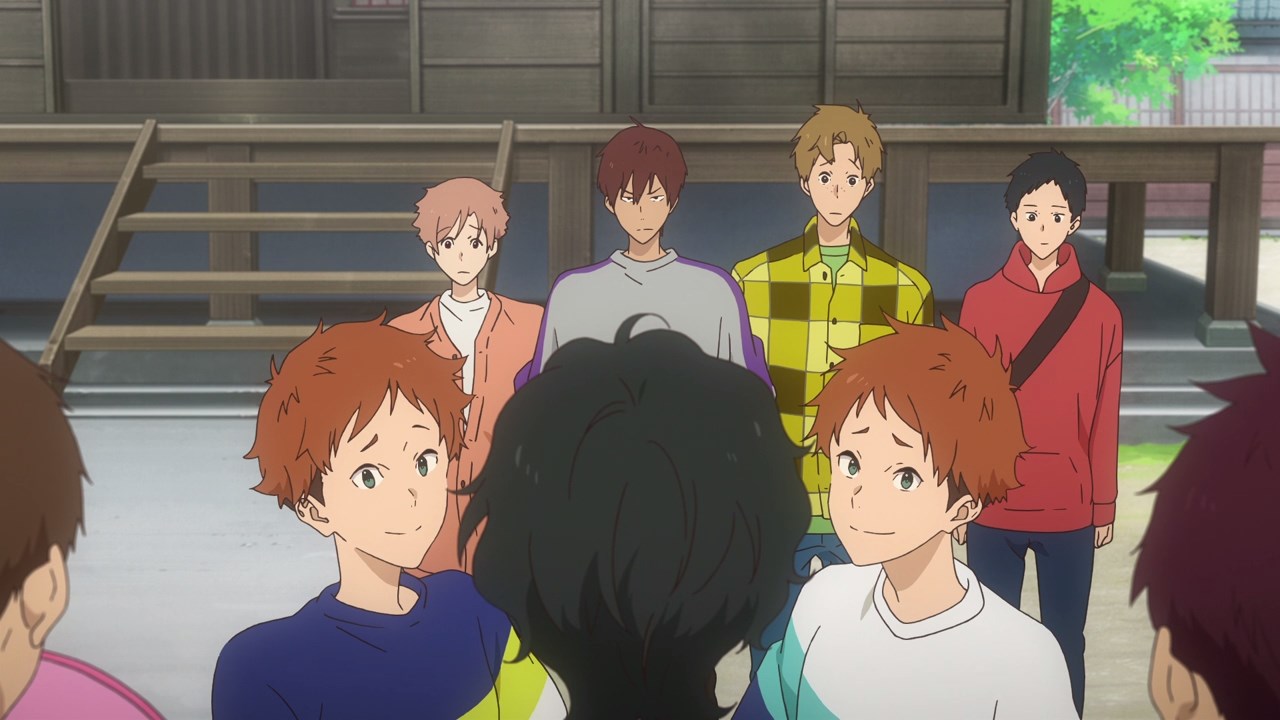 On the other hand, Kirisaki High School’s archery club are here too but unfortunately, the Sugawara twins still continues to bash the boys from Kazemai with Senichi and Manji telling their captain that they’re the lamest archers ever.

You know, I think Hiroki Motomura and Daigo Sase should tell the twins not to mock them. Otherwise, they might get target panic themselves since they shoot real fast. After all, the sport of kyudo needs patience to line up their target and fire their arrows. 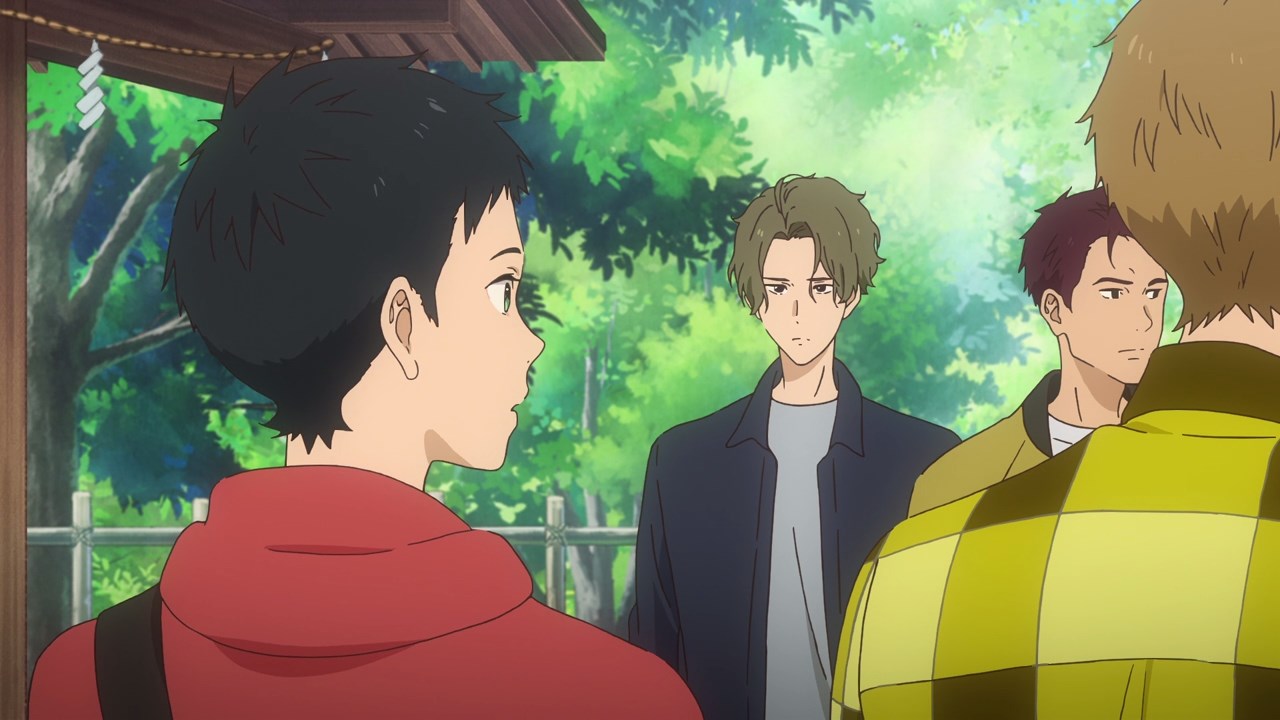 Also, here’s Shuu Fujiwara in which he told Minato Narumiya in regards to Seiya Takehaya, like how he took up archery simply because Minato took the sport as well. While it’s not bad for his friend to take up archery, Shuu says that Seiya took archery because he’s doing it for someone else, not for himself.

Still, Minato will help Seiya since they’re best buddies, but Shuu warned him that he’ll eventually realize that his friend is slowing him down. 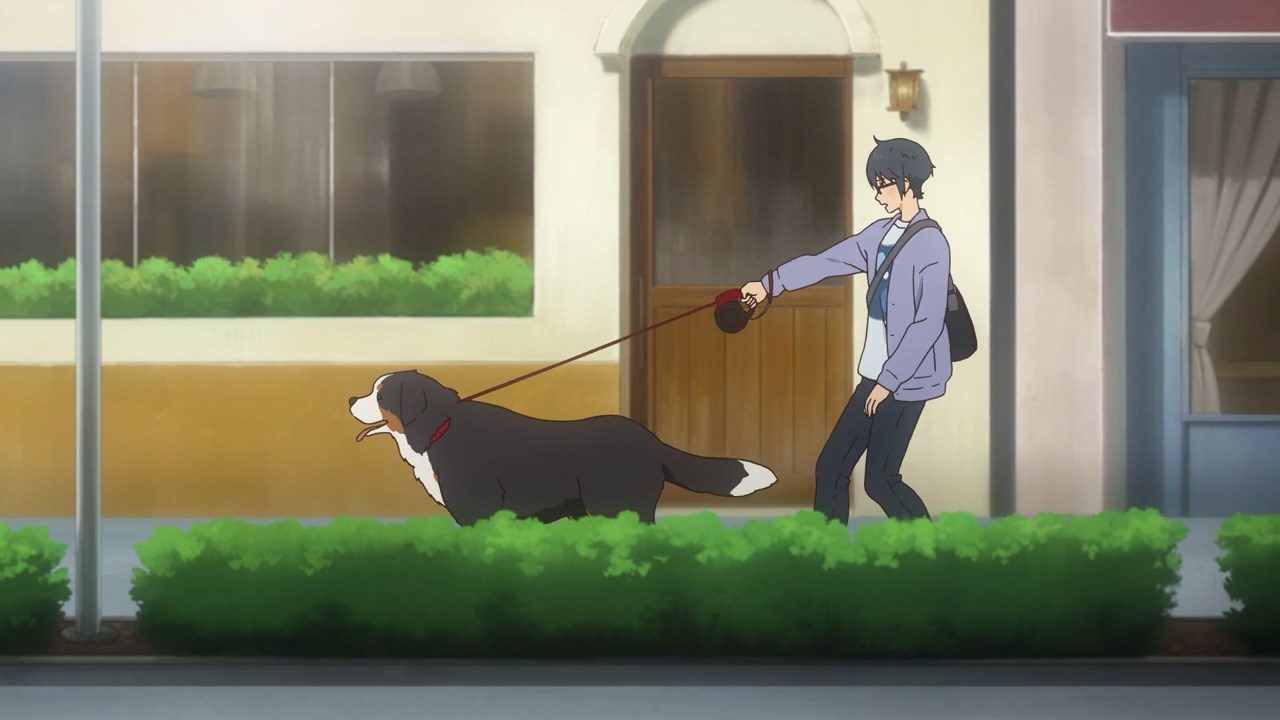 Speaking of Seiya Takehaya, he went outside with his dog Kuma for a short walk. I’m not sure if he can go outside since Seiya is feeling under the weather right now. 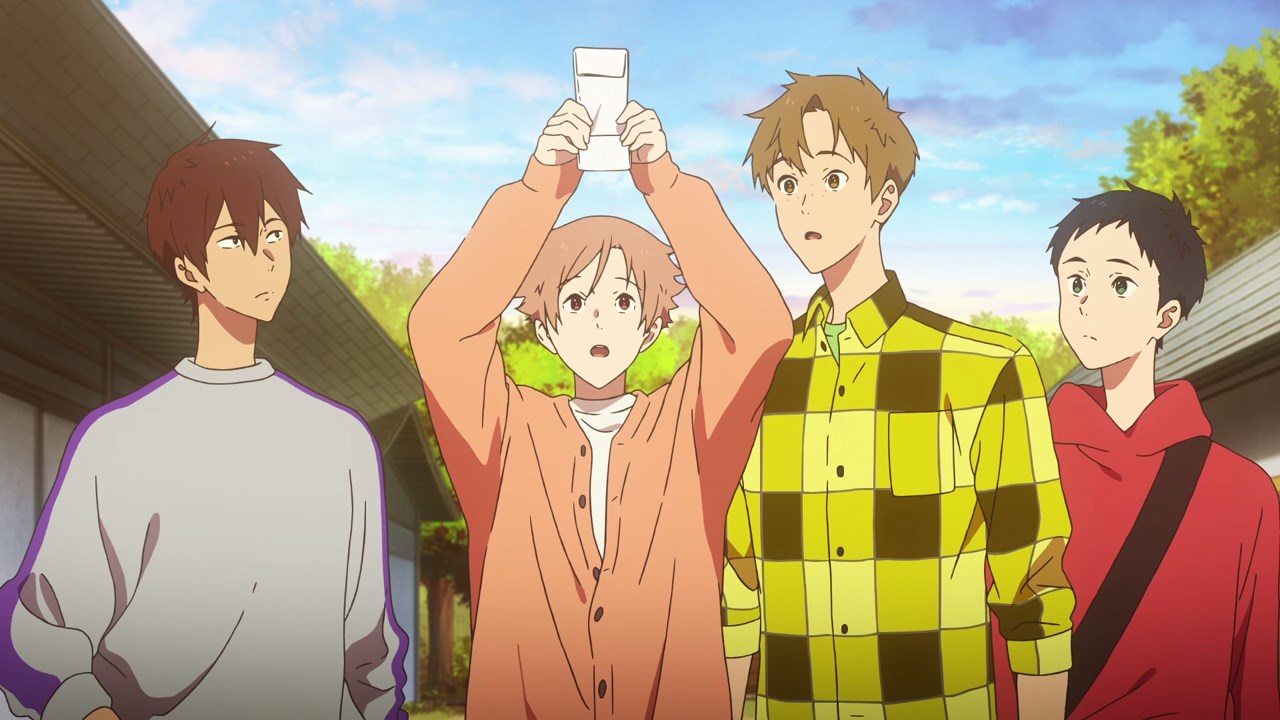 Now then, let’s move onto the next scene where Kazemai High School’s archery club got their fortune, although it seems that they only got a “normal” good fortune. At least it’s not a bad one! 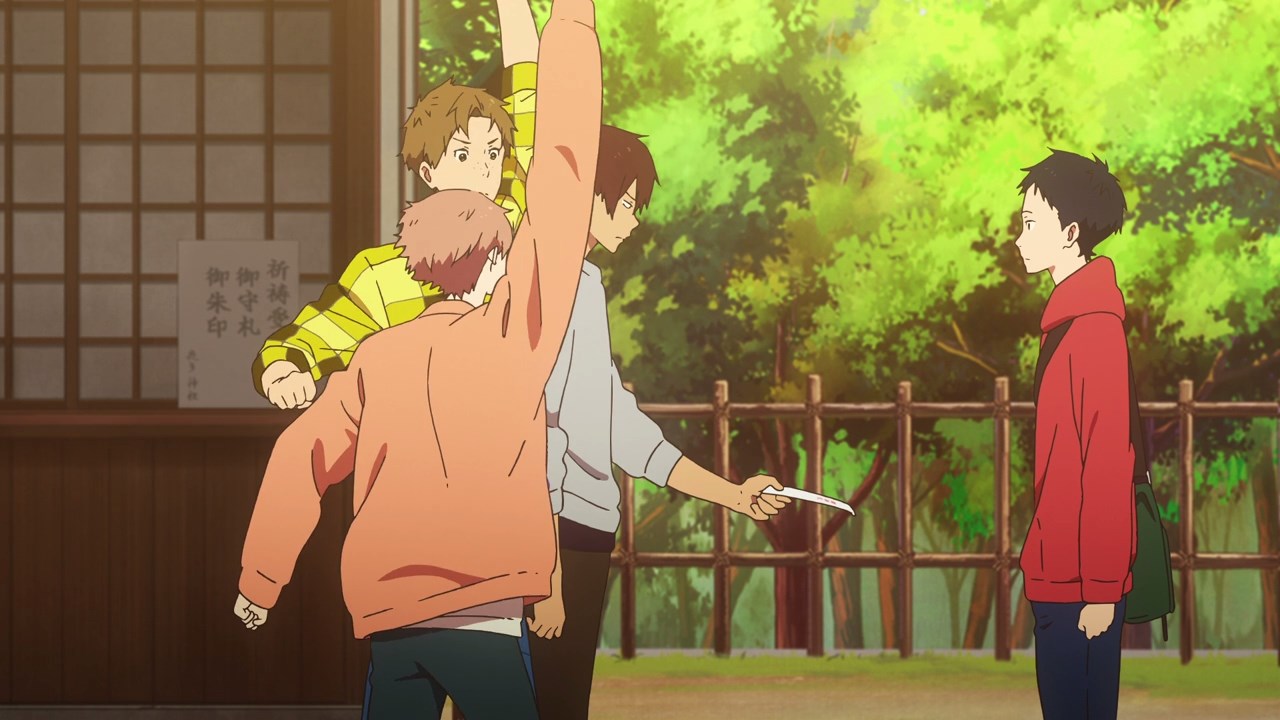 But you know what, let’s make it special by transferring both Nanao Kisaragi and Ryohei Yamanouchi’s energy onto that charm.

Not sure it’ll work though but hey, it’s the thought that counts! Then again, I think they should pay a visit at Seiya Takehaya’s home. 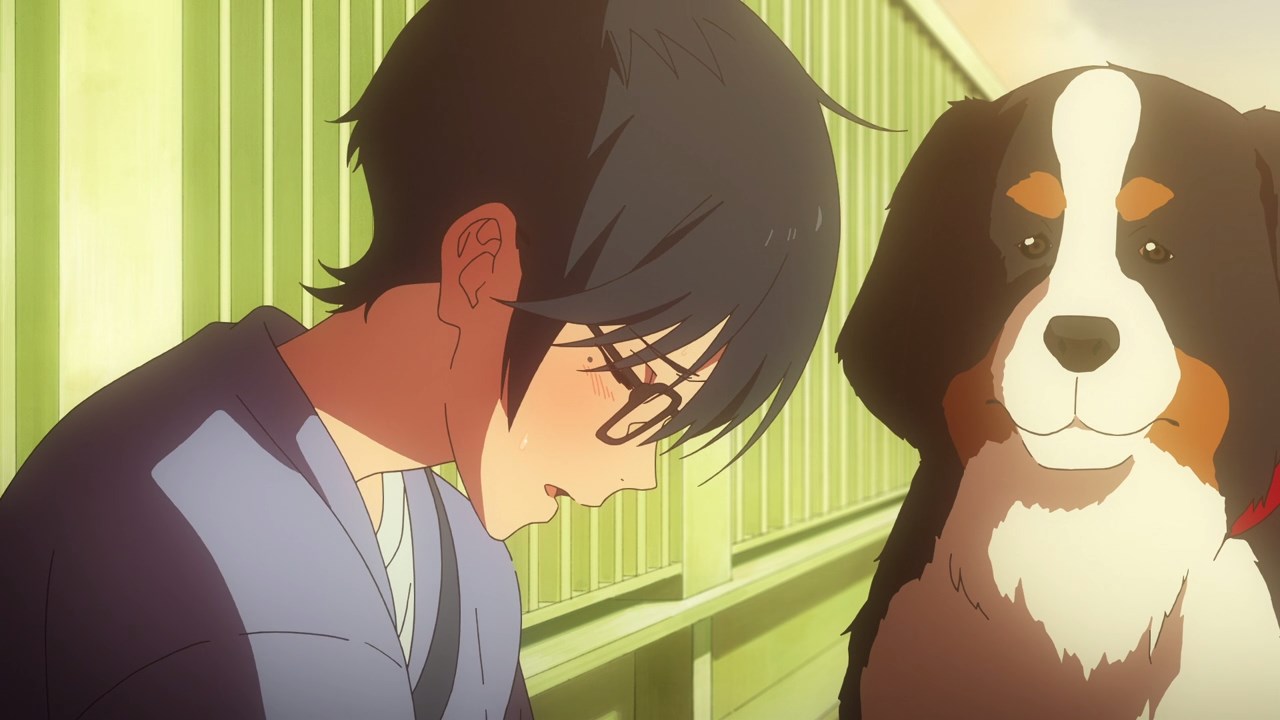 Or rather, they should find Seiya Takehaya as he’s outside and his fever is acting up. Also, not a good idea to stay in public places like footbridges. 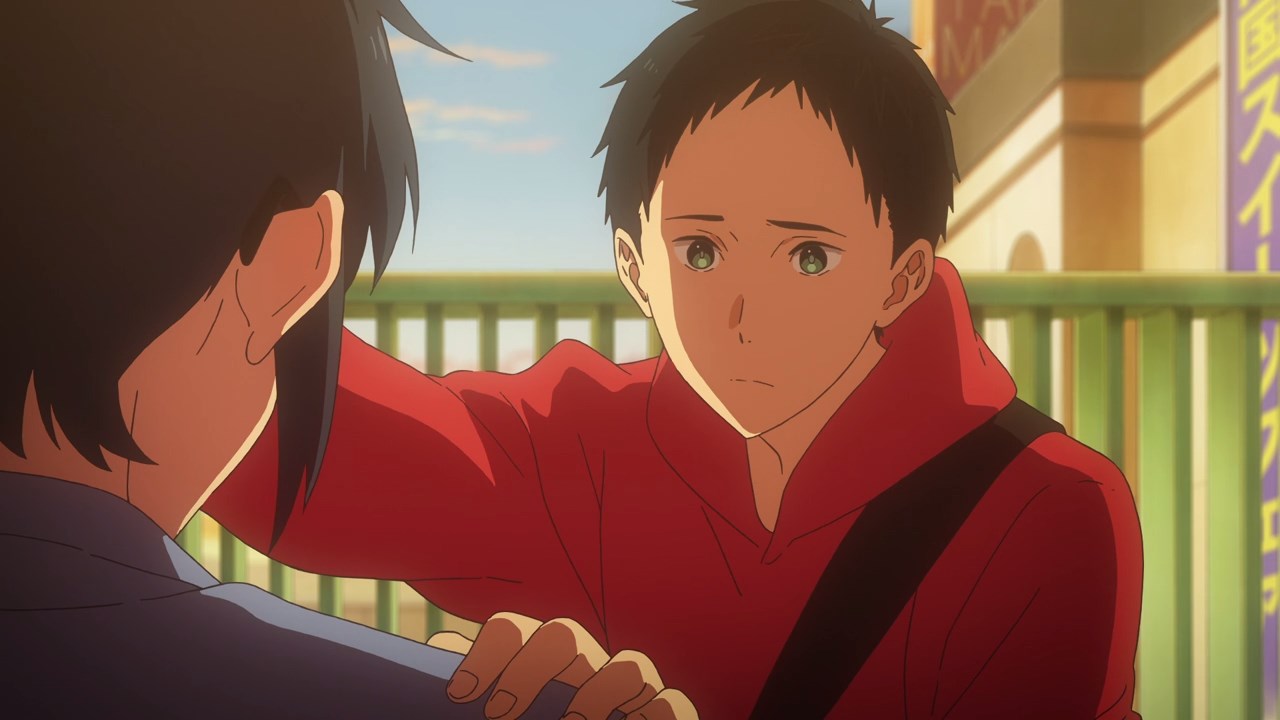 Fortunately, Minato Narumiya has arrived to pick him up as he’s surprised that his friend got a really high fever. Well, Seiya Takehaya should have stayed home and rest. 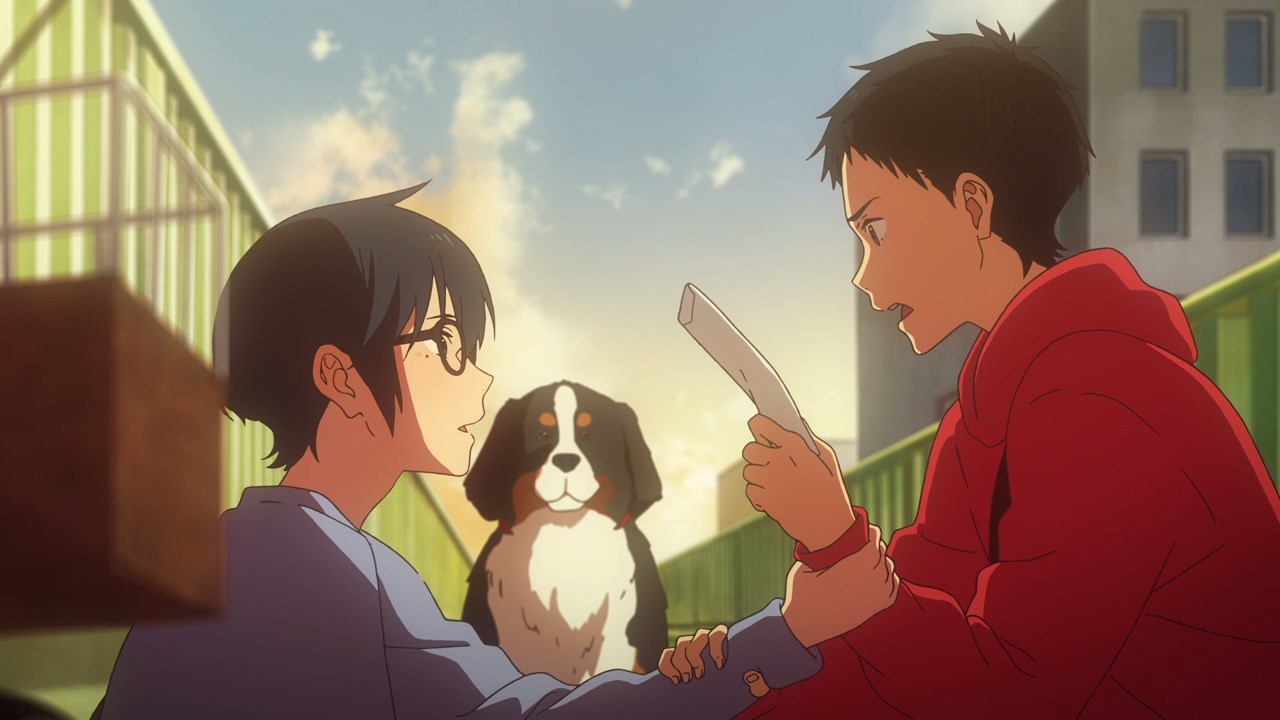 Also, Minato told Seiya that he’ll be waiting for his return as Narumiya gave Takehaya the good-luck charm. Oh, and the chocolate snack too since Minato wrote “I’m waiting” on the box.

But anyways, it’s nice that they reaffirm their friendship despite Shuu Fujiwara’s warnings. C’mon, they’re childhood friends after all! Still, the boys will have to train harder if they want to go further into the national tournament.