The Rising of the Shield Hero Episode #02 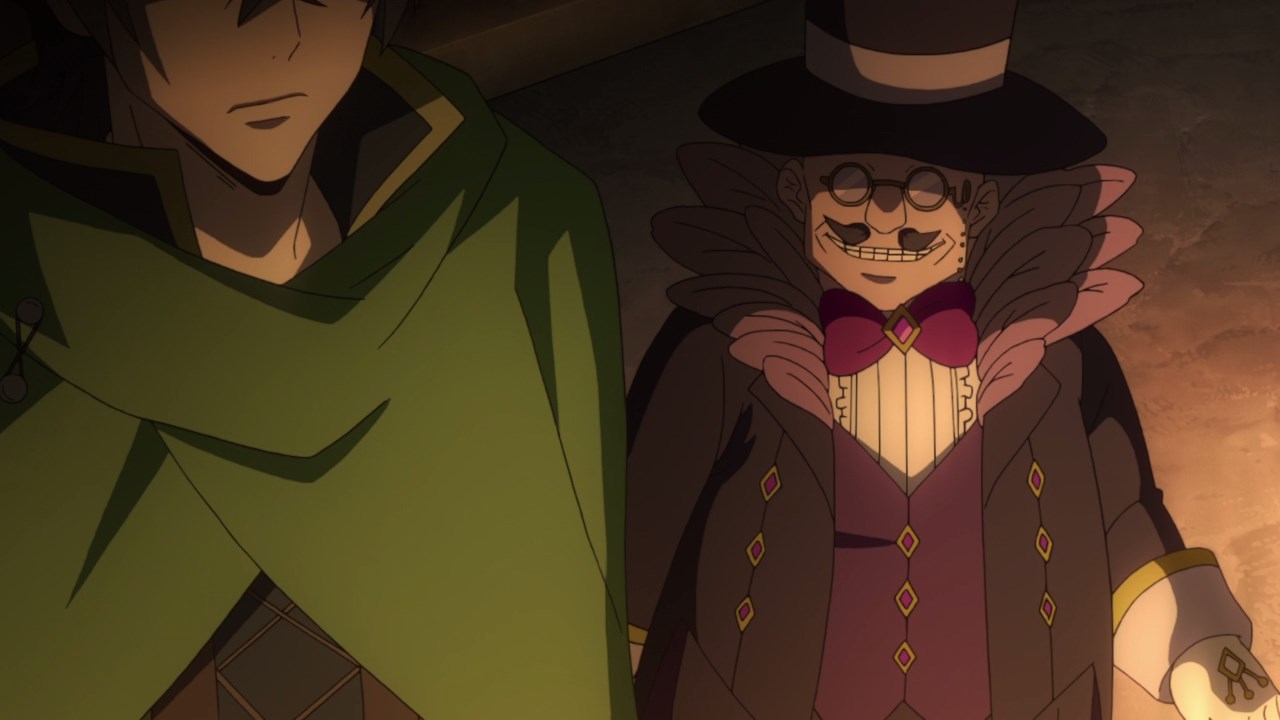 Well everyone, it looks like the Slave Trader is urging Naofumi Iwatani to find a suitable slave and buy it. Don’t worry though, Naofumi will buy one in just a minute! 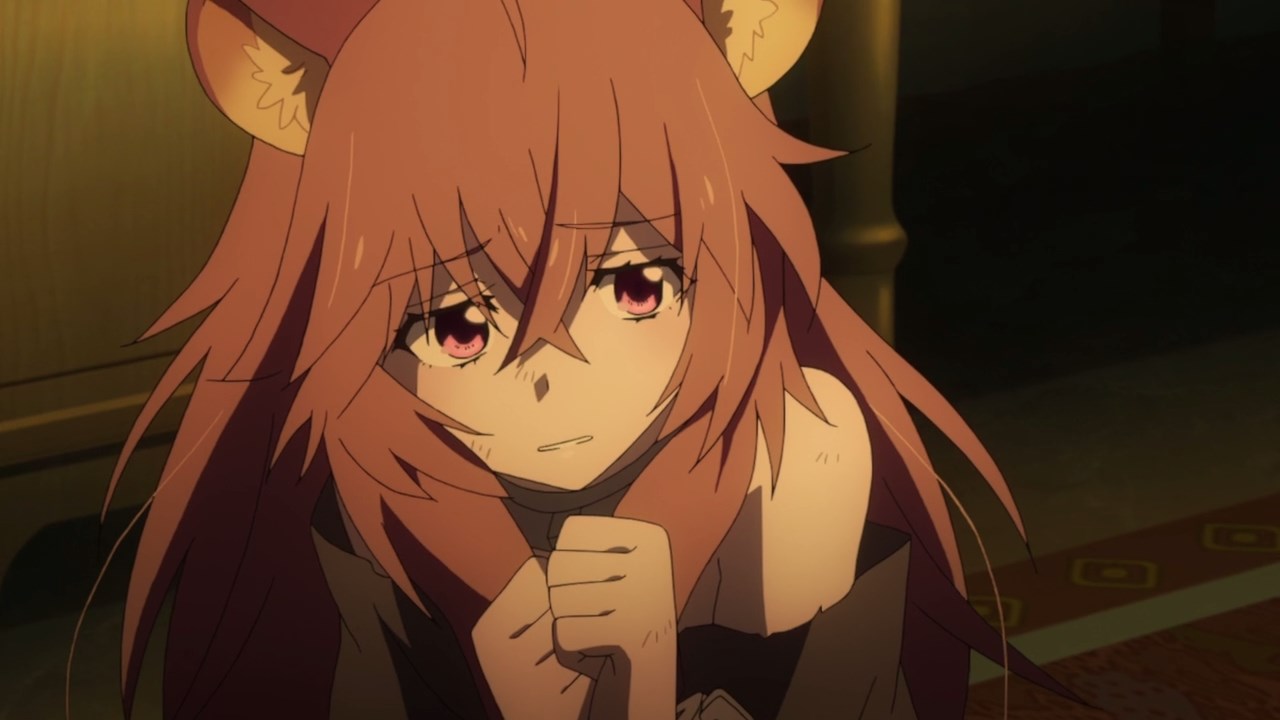 Anyways, this demi-human is named Raphtalia and Naofumi will train her to become a fighter because the Shield Hero can only defend all the time. 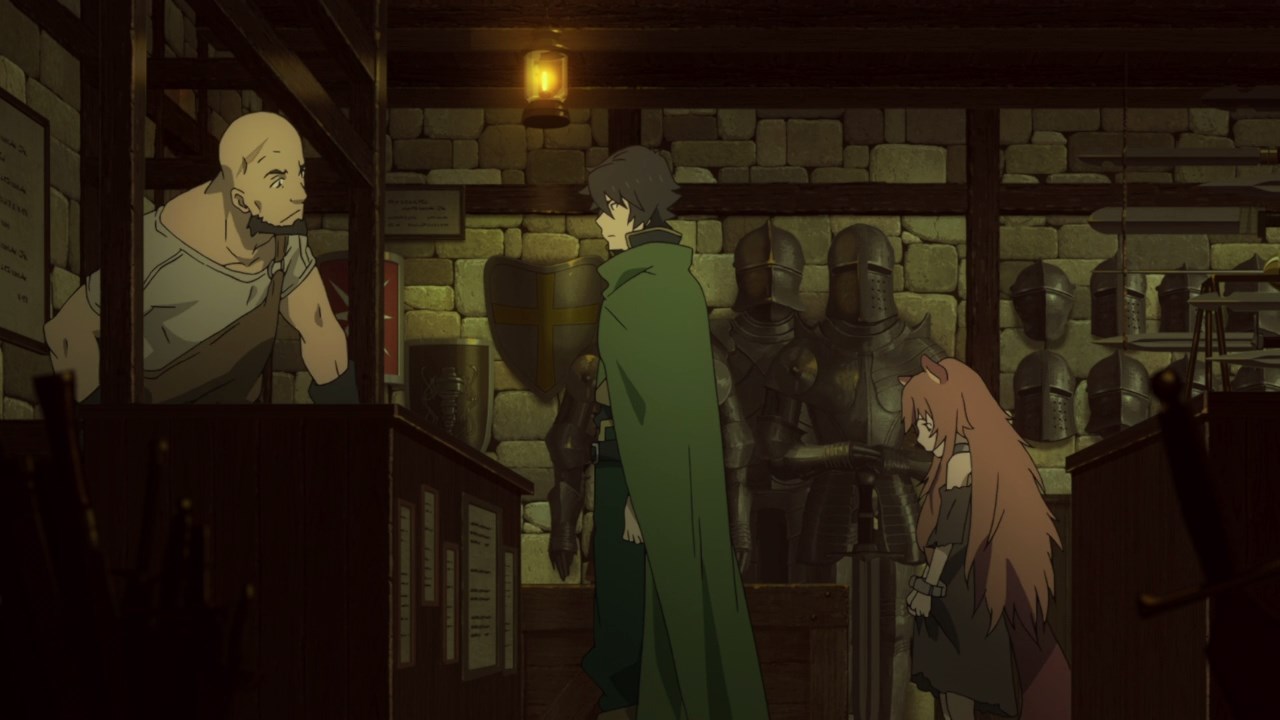 But first, time to visit the Blacksmith as Naofumi bought a knife so that Raphtalia can use it. I mean, it wouldn’t make sense if Raphtalia doesn’t have a weapon to kill monsters. 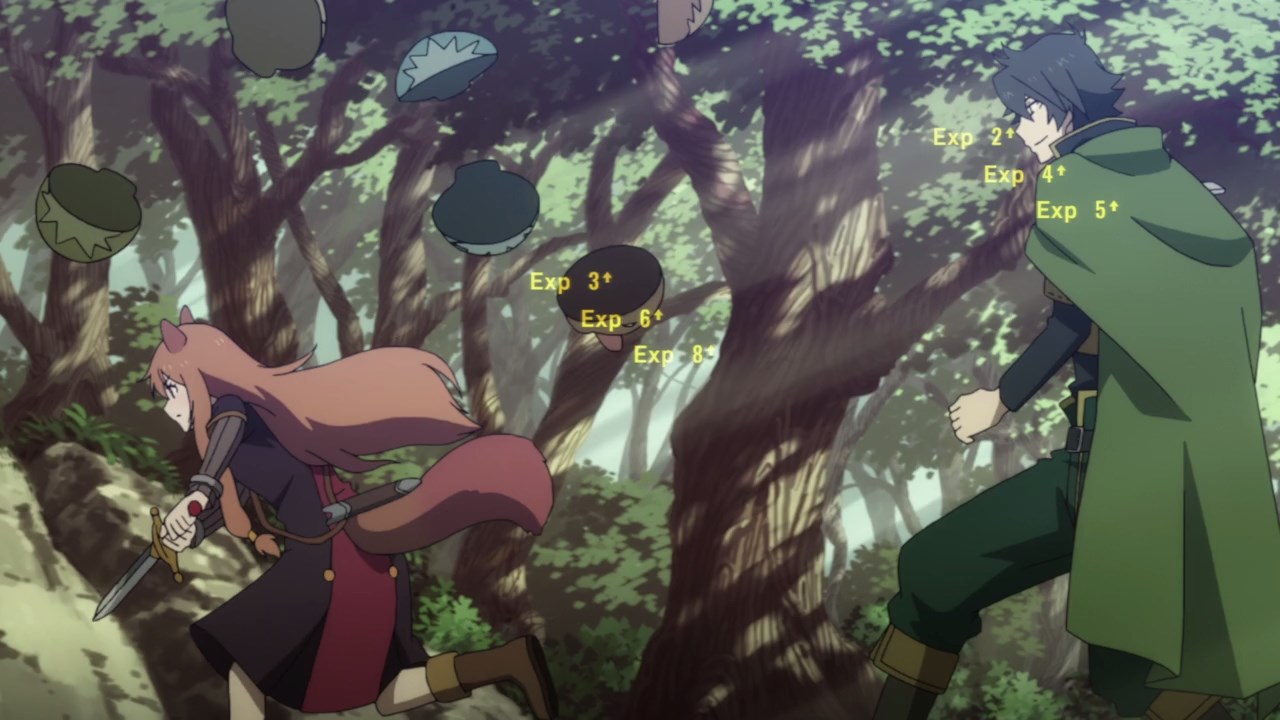 In any case, Naofumi teaches Raphtalia to fight until she can defeat monsters with some help from her master.

Oh yeah, they share experience points in which they can level up and become stronger. By the way, Naofumi didn’t gain any experience when he’s with Myne. 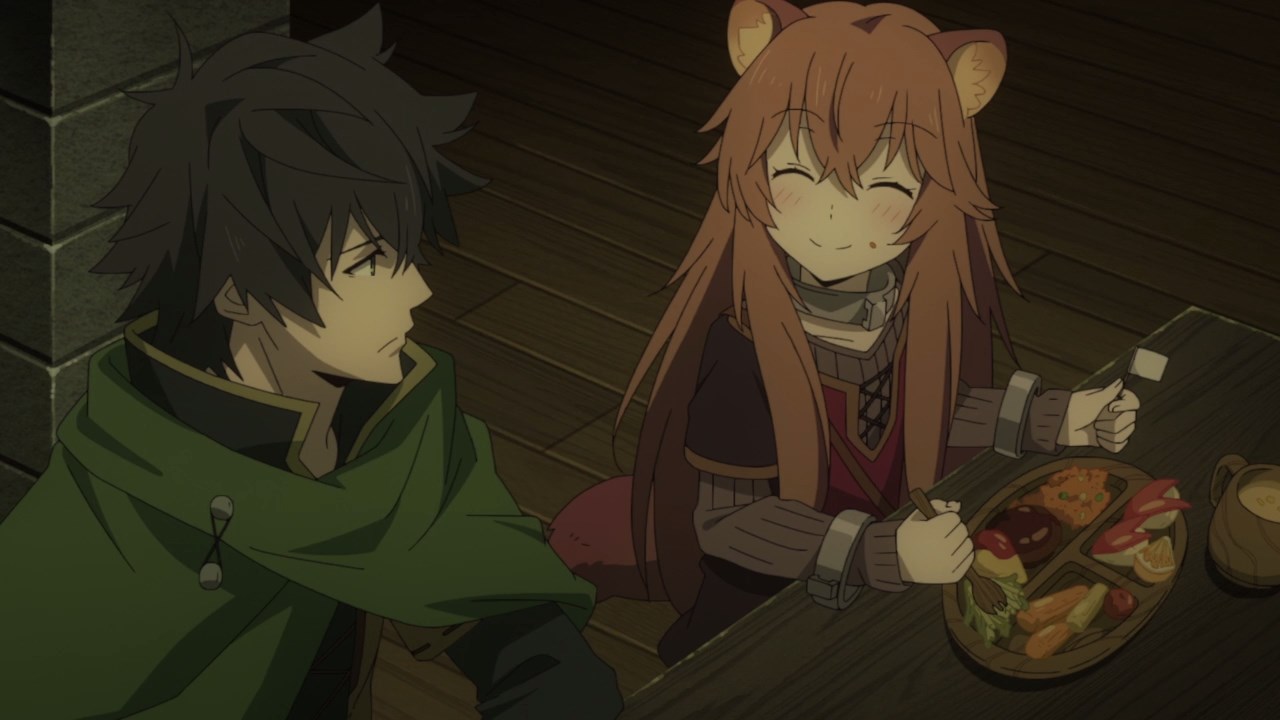 And once they’re done hunting monsters, Naofumi treats her food because Raphtalia can’t fight on an empty stomach. Well, at least she’s being treated fairly compared to her previous owners, who really treat Raphtalia like dirt because she’s a demi-human.

And by the way, the Shield Hero is being associated with demi-humans, which is why the entire kingdom of Melromarc treats him horribly. But that’s okay for Naofumi as he doesn’t need their terrible support anyway as he and Raphtalia will survive on their own, even though Naofumi couldn’t taste anything because of that betrayal. 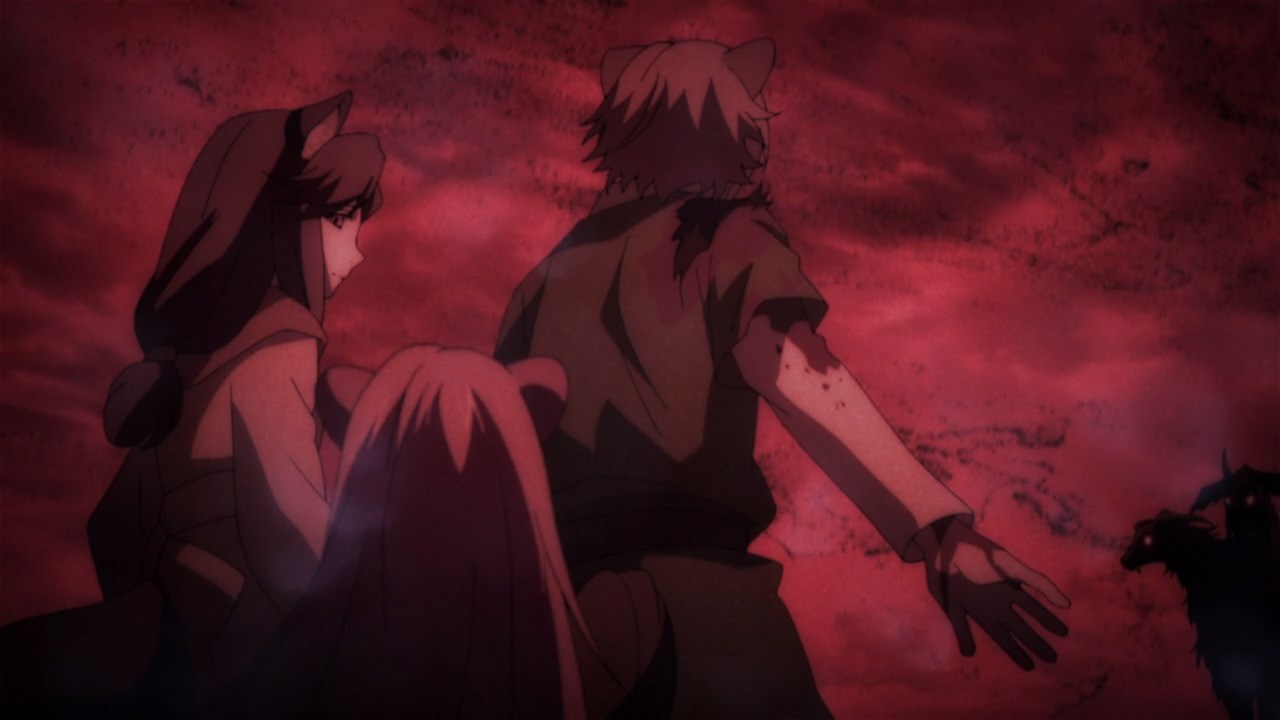 On the other hand, it appears that Raphtalia is having bad dreams where she saw her parents die while defending her from this Cerberus during the first Wave of Catastrophe.

For Raphtalia, it was a bad experience that she cries every time Raphtalia remembered her parents being eaten. 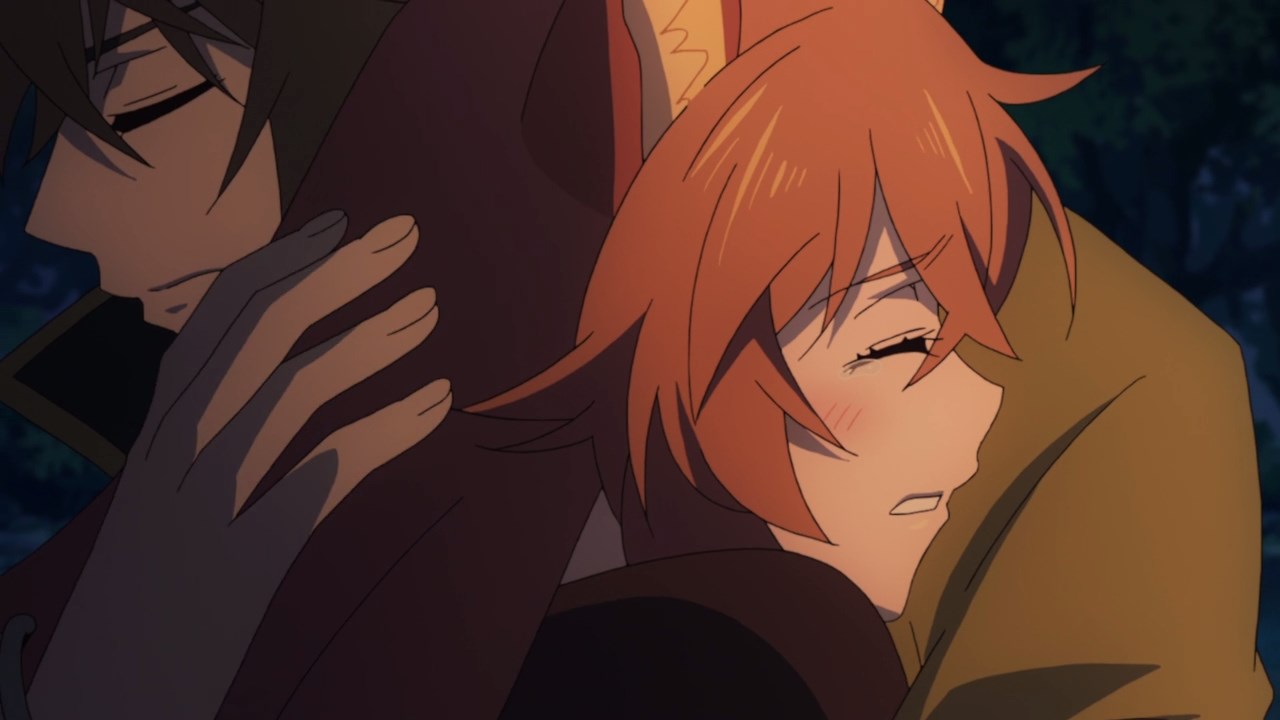 Fortunately, Naofumi is here to calm her down. I mean, it’s saddening to lose someone you love, especially when you’re living in an unpredictable fantasy world where death might come around the corner. 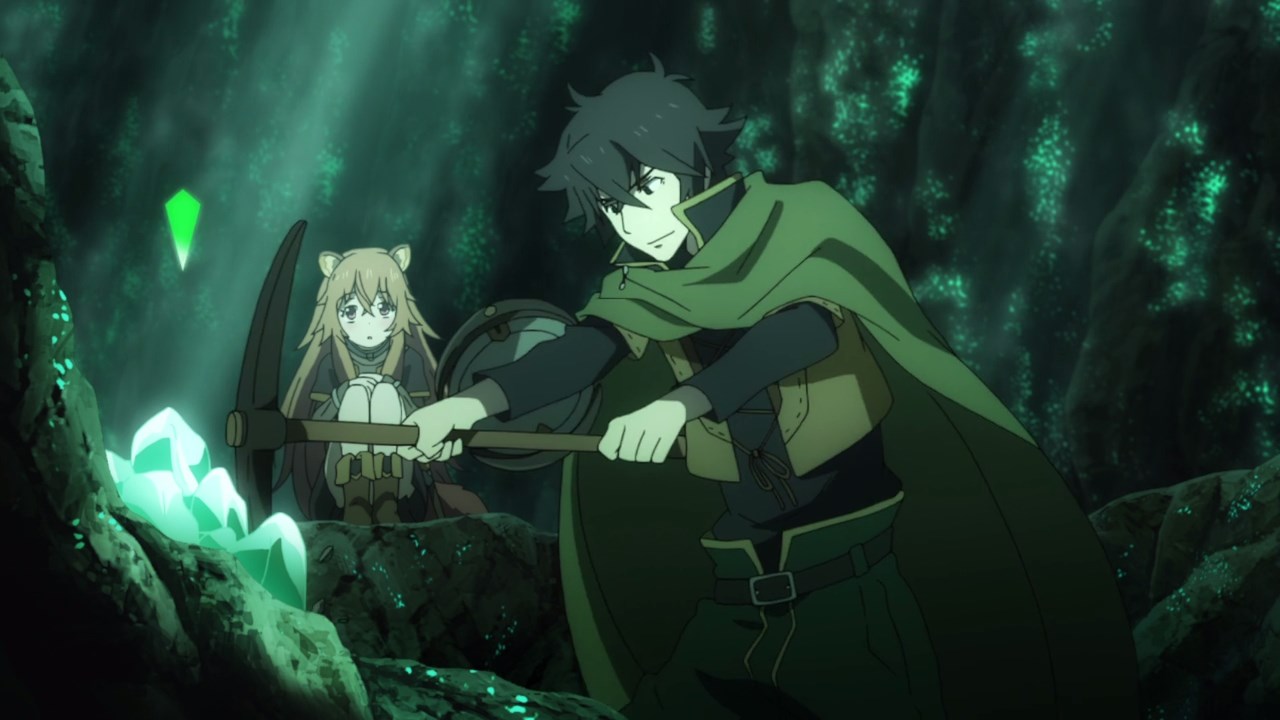 Now then, let’s move onto the next scene where Naofumi went to the caves and start mining ores to sell. I mean, he needs to earn more money in order to sustain himself and Raphtalia on this harsh world. 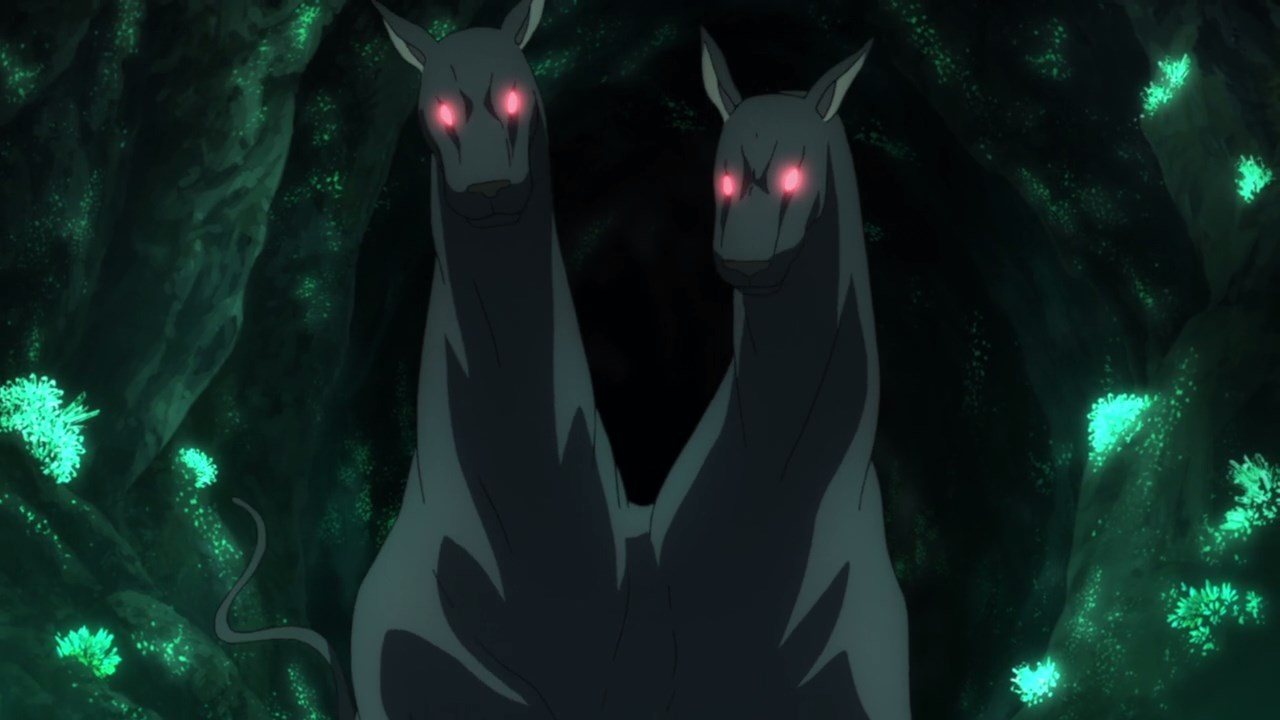 Oh and by the way, the caves are littered with monsters like the Orthros, a two-headed dog monster who’s somewhat related to the three-headed Cerberus.

And given that Raphtalia has some trauma when it comes to dog monsters, seeing Orthros makes her pretty scared that she or even Naofumi might die! 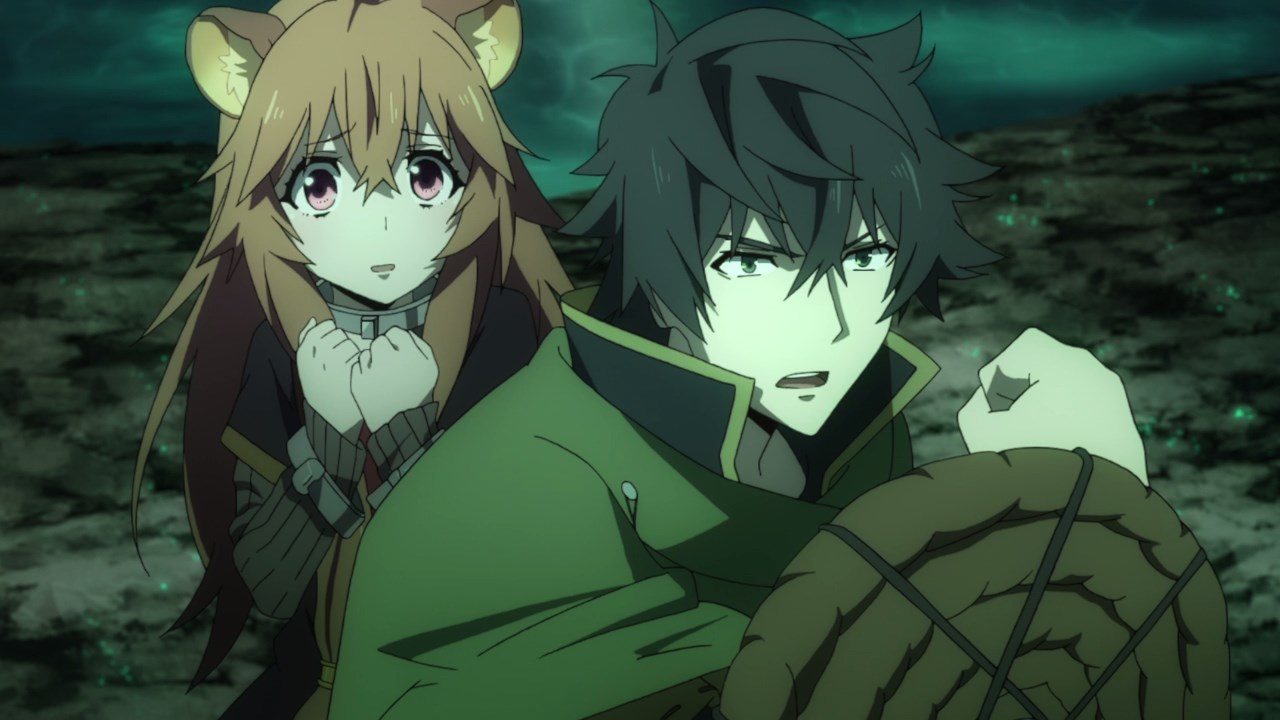 But for Naofumi however, he wants her to fight the Orthros not just because she’s a slave to the Shield Hero, but Naofumi wants Raphtalia to overcome her trauma. 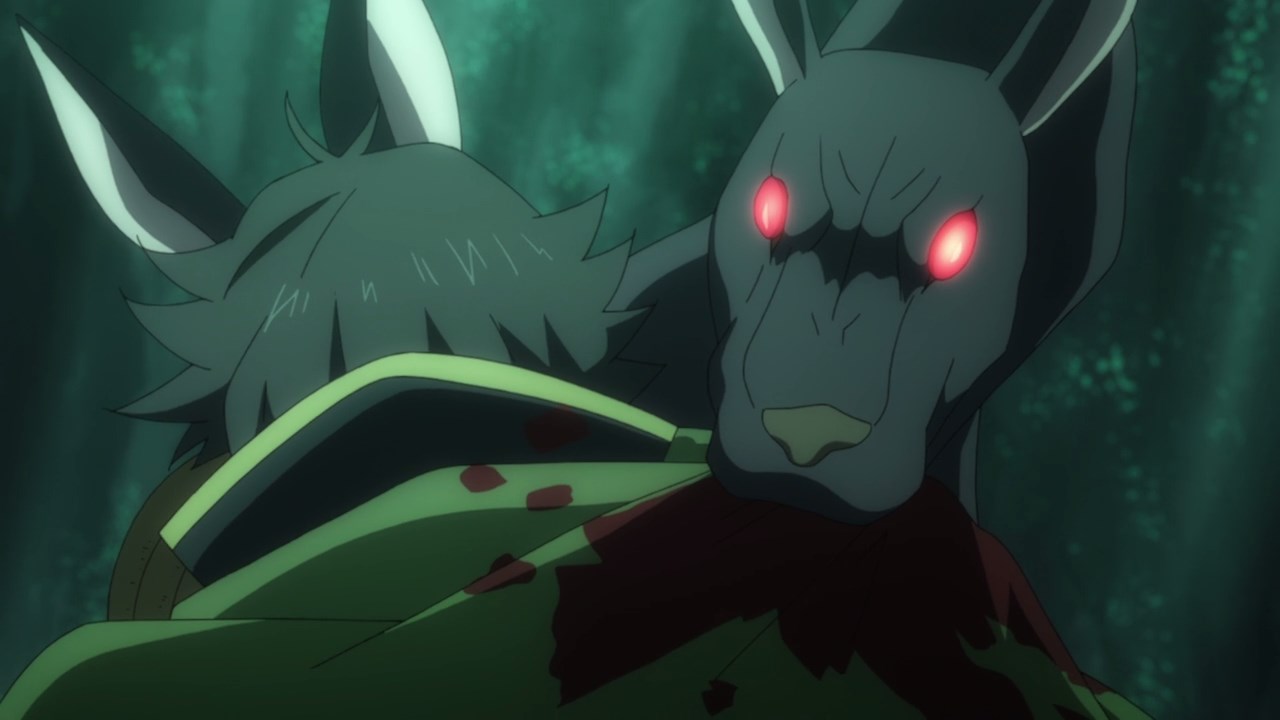 In any case, Naofumi will use his body as bait so that Raphtalia can kill the Orthros, although he might die if his slave can’t do anything because of her trauma. 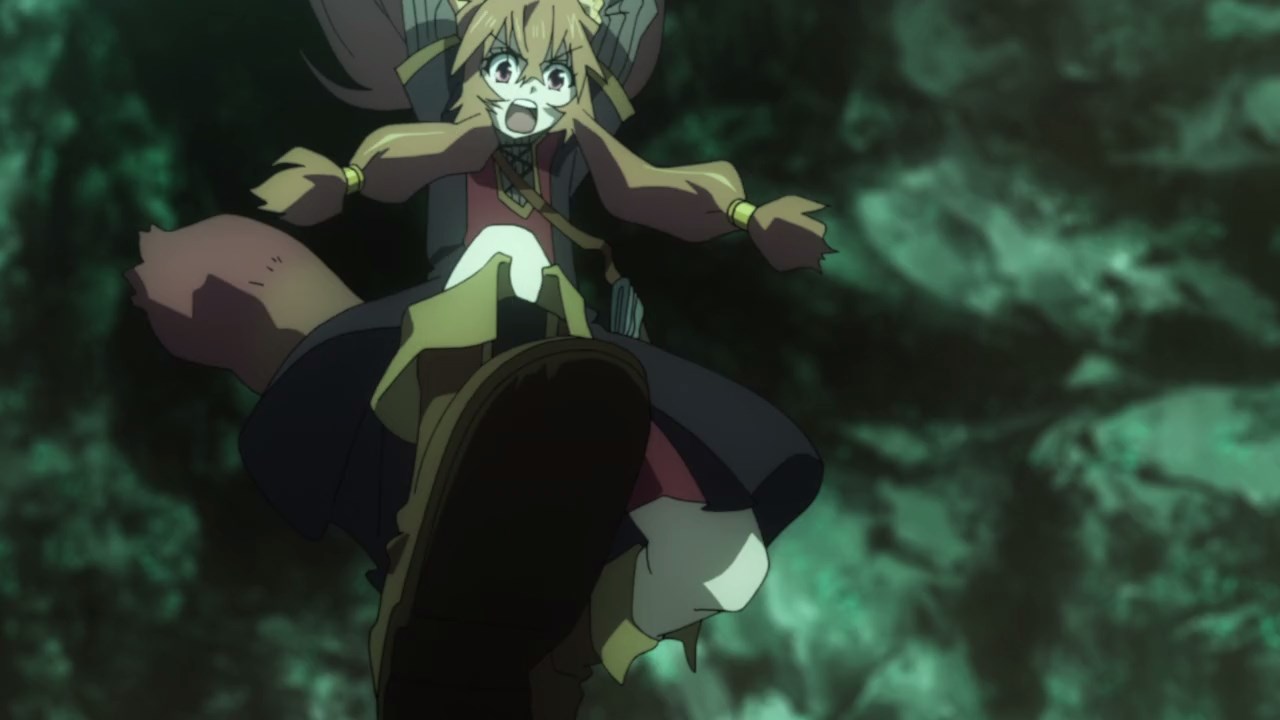 But you know what, if she can’t fight, Raphtalia won’t survive and thus she cast aside her fears and saves her master. 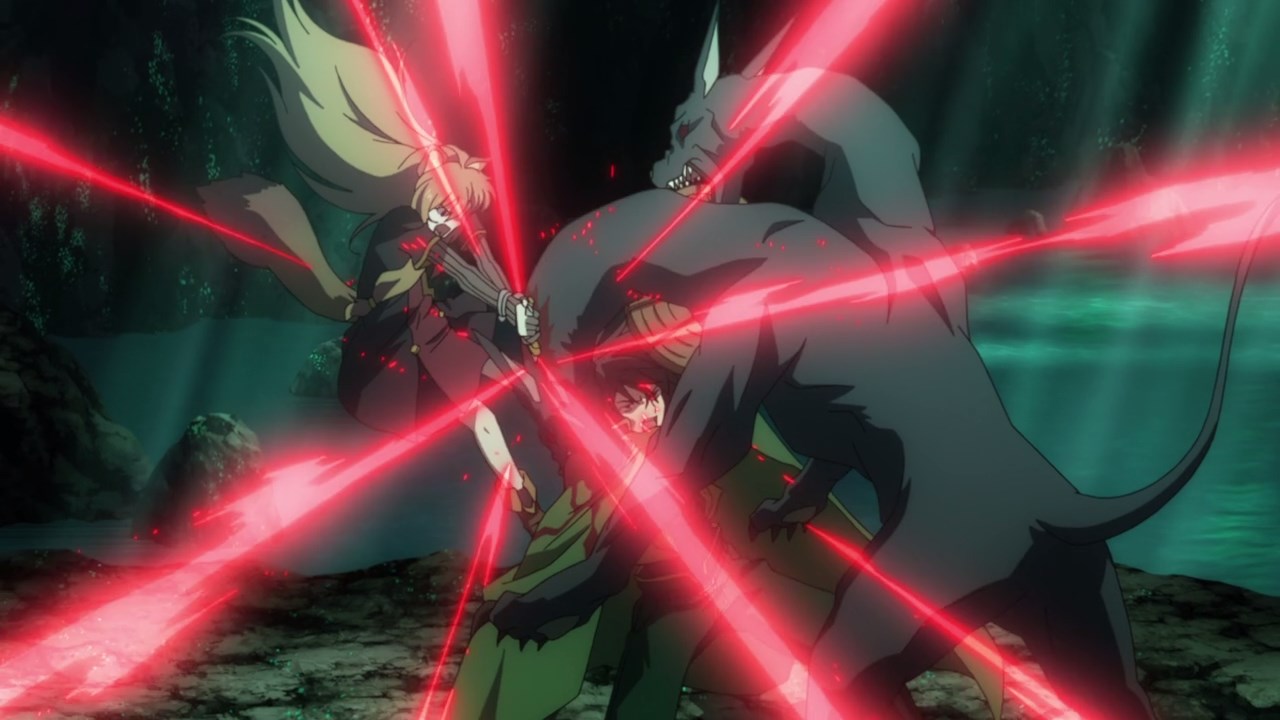 And you know what, Raphtalia finally overcome her trauma thanks to Naofumi.

Sure that his methods are forced and somewhat life-threatening, but it’s his way of letting them survive using their own power. 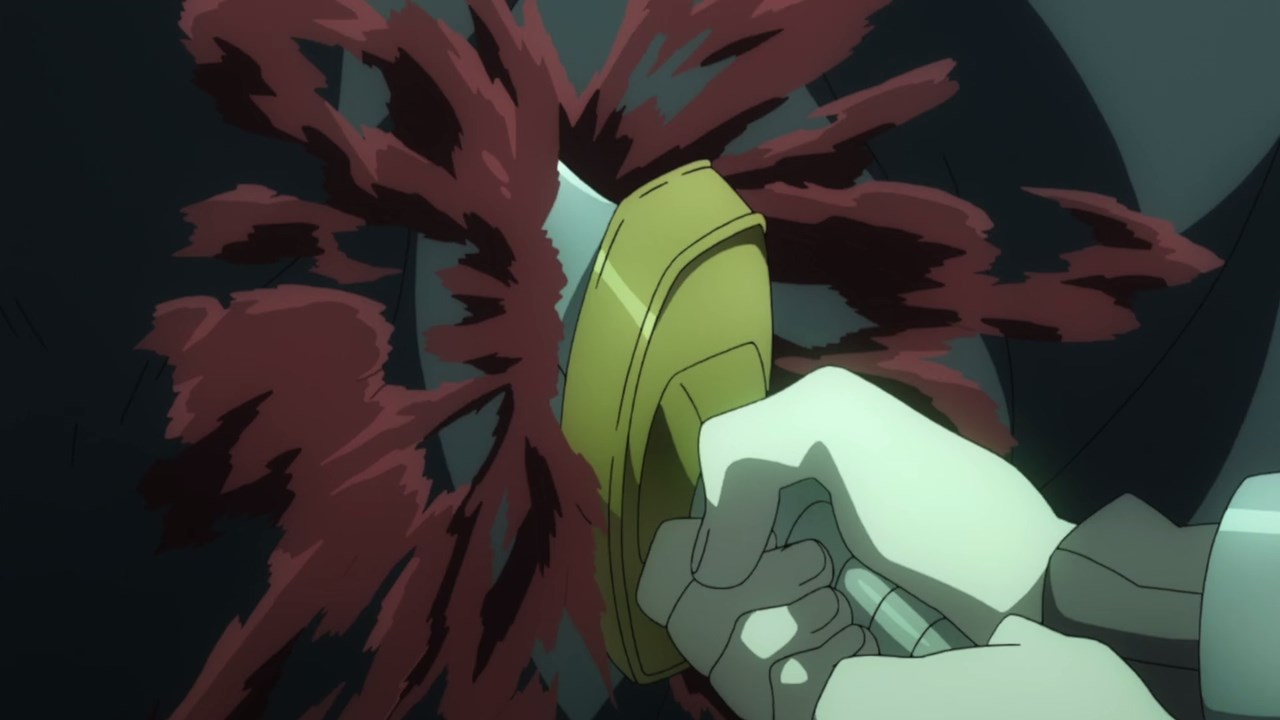 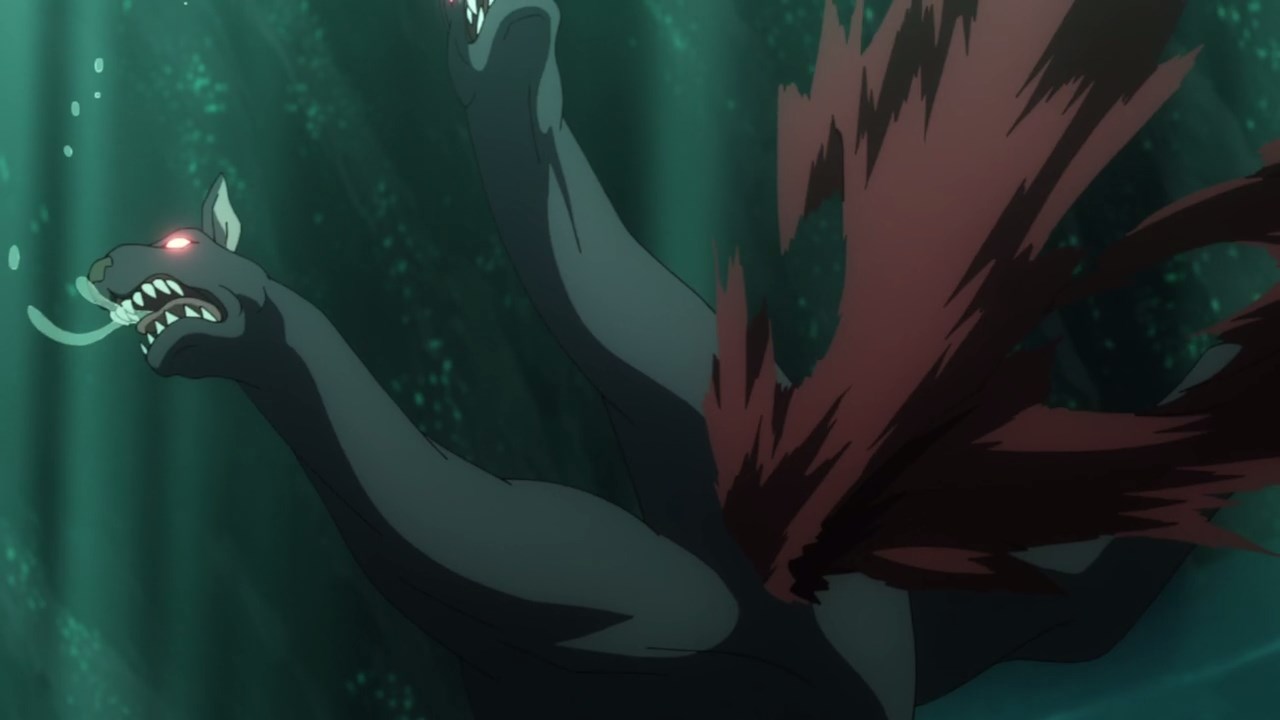 With that said, Orthros is finally defeated and I must say that both Naofumi and Raphtalia will have a big haul of experience points after killing this monster. 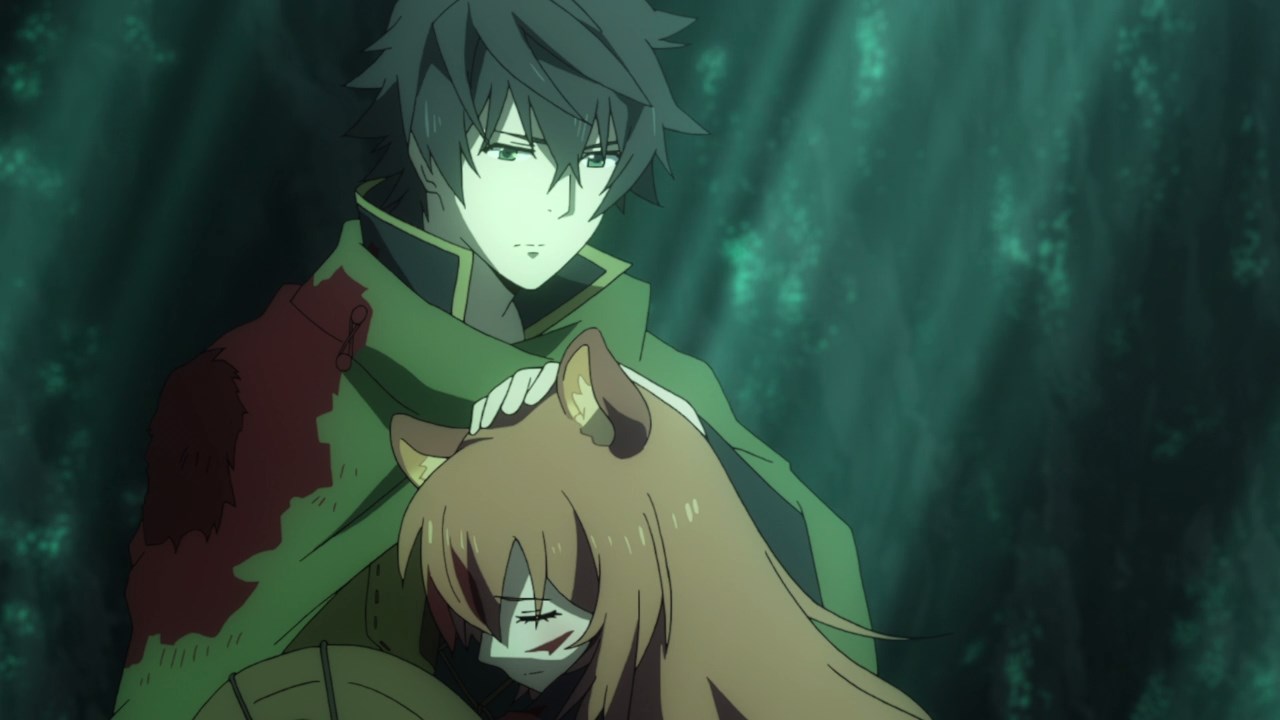 Of course, their perilous adventure has just begun for Naofumi and Raphtalia as both of them must prepare for the upcoming Wave of Catastrophe, all while overcoming prejeduce from the Melromarc Kingdom because they really hate the Shield Hero. Really, they shouldn’t summon him in the first place if Naofumi will be treated as a scapegoat.

Anyways, that’s about it for the second episode as I’ll see you next time where Naofumi and Raphtalia will continue their journey after the latter finally calmed down a bit. C’mon, it’s her first time defeating a high-level monster.